Throughout our international road trip, a frequent topic of conversation was the brief history of "America as we know it." We'd seen Roman ruins older than dirt, castles and ancient Buddhist temples older than our California redwoods... Heck, the equipment at our farm in Nemcicky was probably older than most things in America (the farmer's traditional methods definitely were).

Yes, "America as we know it" is quite young. But I hope it's not a secret that people were living on this continent for eons before the white man came over to claim the land as his own. (I really hope that's a widely known fact, actually.) Each national park we visited during the first month of our road trip made vague references to Native American tribes who were "relocated" from the land so that settlers could grow wheat, raise cows and eventually donate the land to the National Park Service for preservation. But other than a few arrowhead displays here and there, we hadn't really seen much evidence of the original inhabitants' existence or much respect given to these cultures.

"About 550 AD, long before Europeans explored North America, some of the people living in the Four Corners region decided to move onto the Mesa Verde. For over 700 years these people and their descendants lived and flourished here, eventually building elaborate stone communities in the sheltered alcoves of canyon walls." - National Park Service brochure 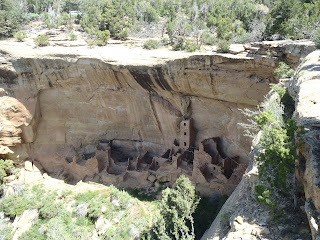 Unlike the Incas, the Ancestral Puebloans didn't really need fortresses to protect themselves from enemies. They needed dry, warm spaces to build homes and storage rooms, and they needed those spaces to be near farm land so they could support their community. Dry farming techniques made excellent use of the climate and sparse water sources to provide corn, beans, and squash that supported this population for 700 years.

In the late 1200s they mysteriously moved away from the mesa. In most cases they took everything with them and everyone left - very few bones have been found in the area. Speculated reasons for the mass-exodus include drought and a spiritual calling to move on... We kinda get that latter reason.

The hikes. We only did one "hike" - the rest were ranger-led or self-guided tours around the cliff dwellings. Tours only cost $4 each so we decided to do all three and really maximize our time in the park. We also stopped at many of the overlooks and drove around Mesa Top Loop to see some of the older pit houses and villages.

Day One: The Cliff Palace tour was our intro to these amazing dwellings. With 150 rooms housing about 100 people at a time, this is one of the largest dwellings in the park. (That doesn't mean that everyone had a room to themselves, of course. Many of the rooms were used for food storage.)

Rooms were constructed from sandstone, mortar (ash, sand and water typically) and wood. A lot of the wood in this and other structures around the park is still intact almost 1000 years later. Amazing.

not a bad view 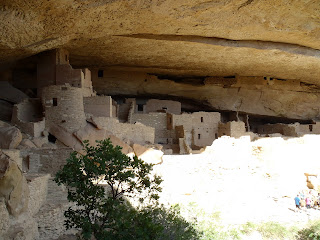 from the left -
see person in blue shirt for perspective 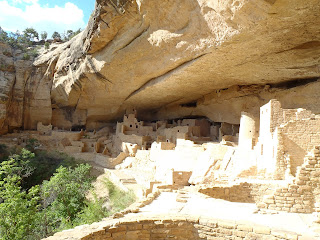 The Cliff Palace tour was also our introduction to kivas, underground rooms where people gathered, cooked, held religious ceremonies... and who knows what else. Back in the day, each kiva had a roof made from wood and mud, so it could be walked over to maximize use of the small alcove space. Kivas had fire pits and wind shafts for ventilation, and each had a symbolic hole in the ground (a "sipapu") representing the place Ancestral Puebloans came from when they entered this world. Residents entered and exited the kiva through a hole in the roof, further symbolizing that "place of emergence" concept. 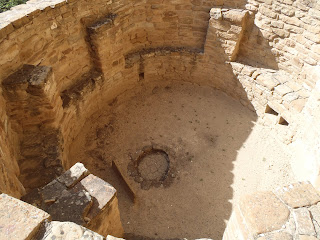 first kiva of many

Our ranger on the Cliff Palace tour was an archaeologist, so we learned a lot about the history of how these dwellings were discovered and efforts being taken to keep them preserved.

Later that evening we hiked along Knife Edge to see the sunset. 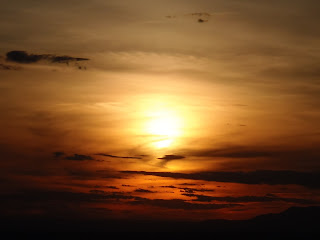 Day Two: In the morning we took the Balcony House tour. Considered a medium-sized cliff dwelling, Balcony House "only" had 40 rooms. We accessed the site by a 32-foot ladder (not original wood, thankfully) and crawled through a tight tunnel to exit. 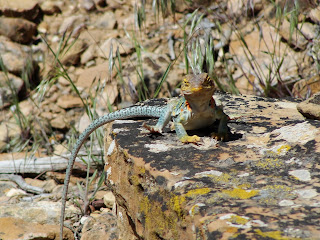 but first we saw a collard lizard! 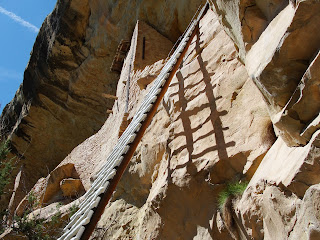 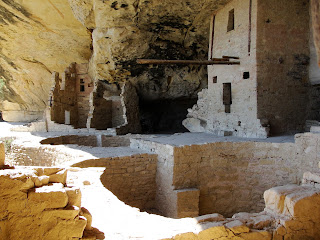 those wooden posts sticking out
used to be a balcony 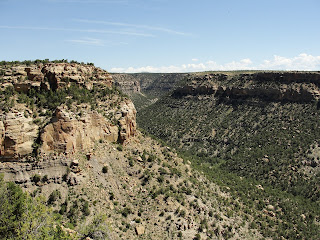 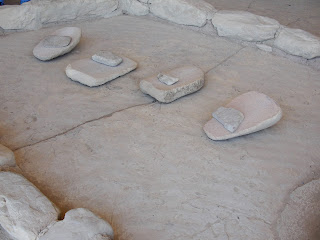 Our ranger on the Balcony House tour was an anthropologist, so we learned about Ancestral Puebloan spiritual beliefs, presumed approaches to building these alcove communities, and what a typical day might have looked like.

Next we took the self-guided tour of Spruce Tree House, the third largest dwelling in the park and also the best-maintained. This one had 130 rooms and probably housed around 70 people. 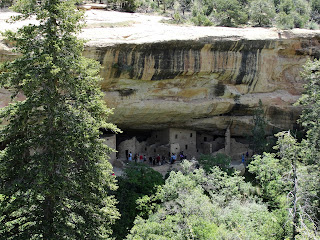 On the other side of the park, we stopped by Step House for the brief self-guided tour. Here we could enter the kivas (they're exactly what one would expect of covered underground structures - dark and cool). This site also had an example of a pit house indicating that multiple cultures lived in this spot at one time or another. 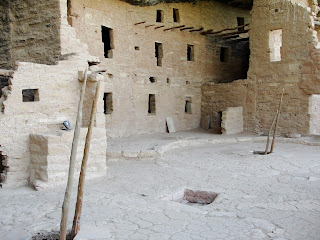 ladders leading down to the Ancestral Puebloan kivas 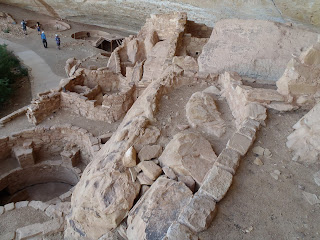 Step House from above 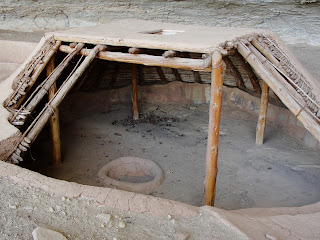 pit house from the Basketmaker era


Our last official stop was Long House, the second largest dwelling in the park. 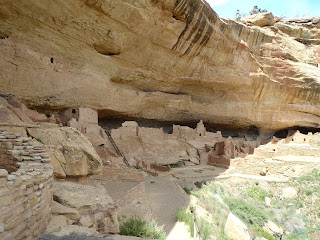 Long House from the left 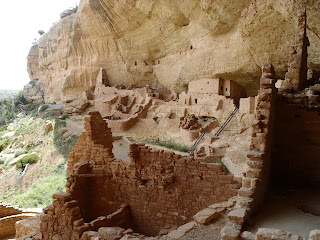 Long House from the right

Our ranger on the Long House tour was a lifelong park ranger. We had a 2-mile walk to the site, and along the way we chatted with her about her other park experiences and the park ranger selection process. Apparently it's quite competitive (especially for "keystone" parks like Mesa Verde, Yellowstone and Yosemite) and if a ranger wishes to stay at a particular park, they have to re-apply for their position every year. Many rangers live on park grounds and receive stipends to cover their uniforms (and probably a pretty small salary - we didn't ask, of course). And they work really hard - each of the 40 rangers at Mesa Verde is trained to give tours at all three "houses" so everyone rotates; rangers also organize educational programs and participate in research projects around the park. All this while looking for off-season winter work... Sounds exhausting!

Anyway. Less administrative ranger talk, more alcove dwelling talk. We stopped at a few other spots in the park too. 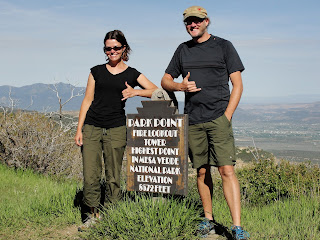 Park Point, highest elevation in the park
(considered one of the "grandest 360° views in the country") 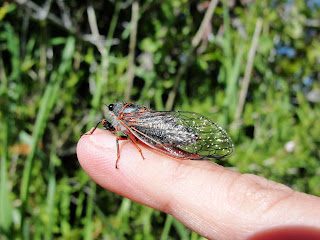 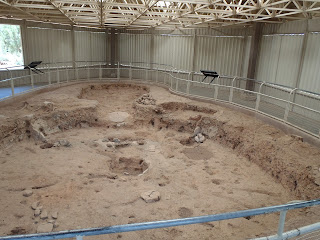 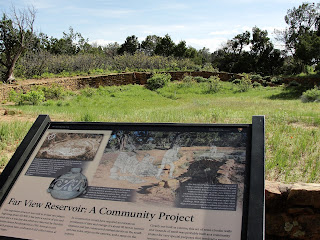 The camping. We planned to stay in the park for 2 nights... until we learned that campsites were $28/night. The sites are pretty jam-packed and right next to the road. The trees do offer shade and a bit of seclusion, and the park does offer free showers, but we really should've listened to a guy we met in Durango who recommended that we stay in a nearby state park instead. (Always listen to the locals! Always!) 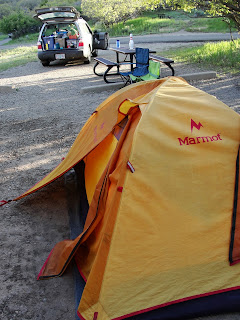 So we just stayed one night. On the upside, we were able to walk to the amphitheater that night and see a ranger program about the stars. The information in the program was interesting but the ranger's occasional not-safe-for-kids slip-ups while describing Greek history were definitely worth our hour. We'll just let your imagination run wild there. 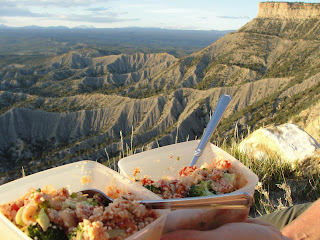 The summary. The park is expensive, yes, but it's also in the middle of nowhere so the costs of hauling water, food and supplies must be enormous. Tours are a bit crowded but attendance is capped and they're well-organized, pretty frequent, and really inexpensive. We learned a lot and saw some beautiful ancient architecture and scenery. So glad we went. You should go.

Speaking of "spiritual calling to move on" - Utah next, just in time for Patrick's birthday!
Posted by Jen
Email ThisBlogThis!Share to TwitterShare to FacebookShare to Pinterest
Labels: camping, united states, us national parks, us road trip