For many years Colorado was my favorite US state. About 20 years ago I lived in Golden (just outside of Denver, home to that unfortunate beer known as Coors) and I spent many long weekends camping around the state. Every few years after that I made it a point to visit Rocky Mountain National Park and the surrounding areas.

And then I met Oregon, and Colorado became my second-favorite, and I was too busy enjoying Oregon to go back to Colorado. (Sorry, Centennial State.)

So crossing the border from New Mexico was an especially exciting part of this road trip for me. We didn't make it as far north as Rocky Mountain this time around, but Colorado is Colorado - for the most part, anyway. 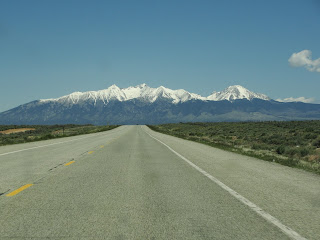 Colorado: where many roads feature these views
After our quick stop (and failed camping attempt) at Great Sand Dunes National Park we headed west to find a place to pitch our tent for the night. Little green tents dotted Hwy 160 on our trusty road atlas; we knew we'd be okay that night, we just didn't know where we would end up. Aventura!

Hwy 160's scenic byway took us through some gorgeous San Juan Mountain passes and over the Continental Divide. 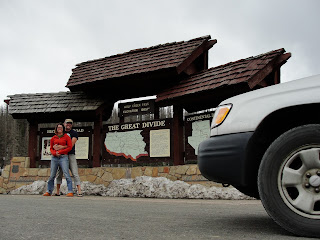 good job, little car!
A few hours later we ended up at Lower Piedra campground near Chimney Rock National Monument. The campground was empty when we arrived; our campsite was next to a roaring river and we didn't even hear several campers pull in after we went to bed. 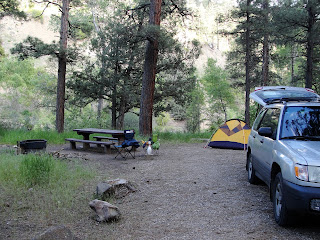 campsite #4 for the win 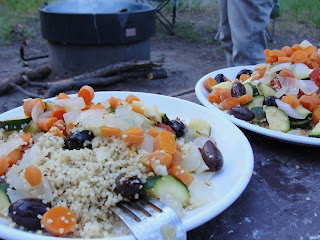 possibly the most random dinner yet 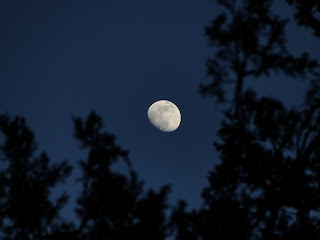 we like tha moon
We ended up skipping Chimney Rock National Monument the next morning - the first guided tour wasn't until 9:30am and we wanted to get a much earlier start. After stopping in Durango for some truly time-sucking errands (laundry, showers, grocery store - gaaaaa!) we made it to Mesa Verde National Park and camped for the night.

Our original goal was to hit Utah on June 2 for Patrick's birthday. We left Mesa Verde the morning of May 31, so we had plenty of time and decided to stick around Colorado and soak up the forest for a few more days.

That's where McPhee Reservoir, just north of Cortez, came in... 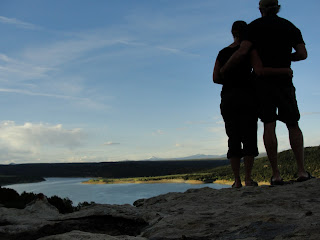 early evening vista
We try to avoid "recreation areas" that tend to have heaps of boaters and families; we prefer quieter more serene environments. With about 100 sites, this "recreation area" was one of the larger campgrounds on our road trip but surprisingly, it was also one of the most peaceful and laid back. The host and other campers were friendly but everyone mostly kept to themselves. The reservoir was just a short walk away; the views were lovely. And bunnies ran through our (ridiculously spacious) campsite! We liked it so much we decided to stay two nights instead of just one. 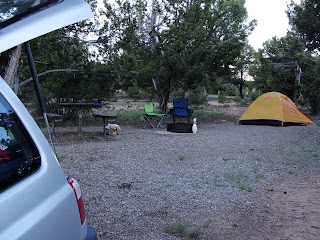 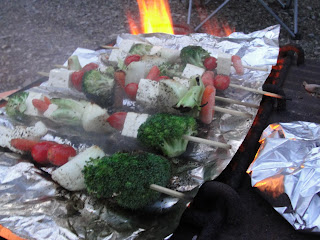 every night should be kebab night 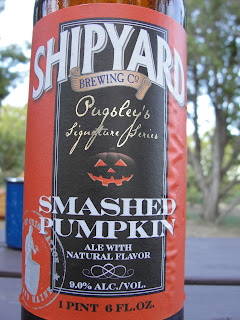 made in Portland ME, purchased in Durango,
enjoyed immensely at McPhee Reservoir
(the Durango Derail Ale was also quite good)
After securing our second night with the camp host, I convinced Patrick that we needed to go to Four Corners. We were only 40 miles away, after all. 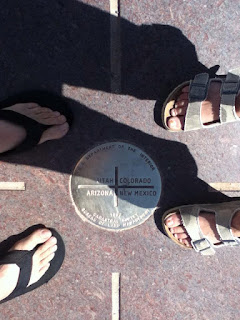 four states at one time -
the best kind of multi-tasking
It was more commercial than I remembered, which was a little disappointing, but we got the mandatory photo op. We also saw several other neat sights along the drive... 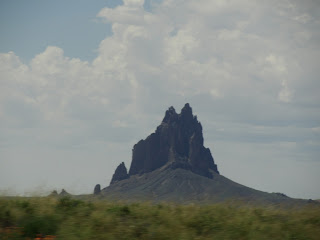 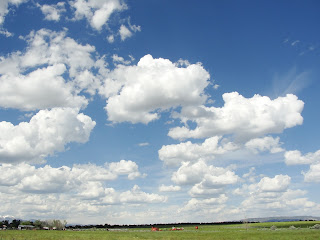 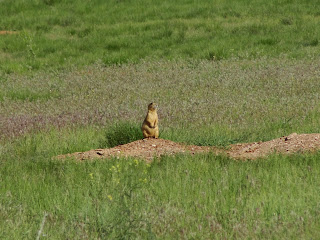 the mayor of Prairie Dog Town (near the reservoir)
Later that afternoon we were finally able to enjoy some down time at the campsite. 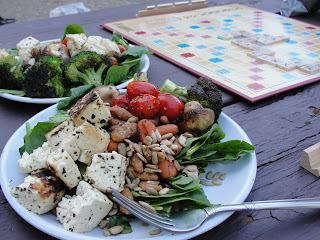 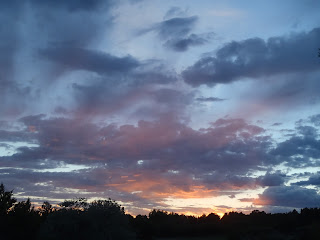 purple haze
And suddenly it was June 2, and we headed over to Utah - after the obligatory bacon birthday breakfast, of course... 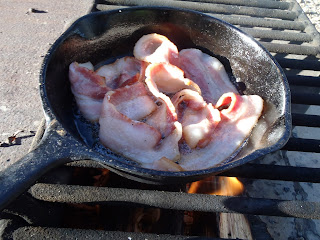 (there were eggs too)
Although we only spent a few days in Colorado, and although we were only in the southern part of the state, I was really happy to show Patrick why I loved it, and even happier to hear that he loved it too.

We'll see you again soon, Centennial State... There's so much more of you that we need to explore! But first, the Mighty Five of Utah!
Posted by Jen
Email ThisBlogThis!Share to TwitterShare to FacebookShare to Pinterest
Labels: camping, united states, us road trip