Five hours in Arizona (including the Grand Canyon's North Rim).

Our original plan was to camp in the North Rim of the Grand Canyon between our visits to Bryce Canyon and Zion National Parks.

Actually, our original original plan was to skip the Grand Canyon altogether, for a few reasons. I've been to the South Rim several times already; this park wasn't high on Patrick's list; we both knew that the best way to explore was by backpacking down into the canyon (or maybe a rafting trip), which we didn't have time to do on this road trip.

But the North Rim is only open during the summer and since we were going to be fairly close (and probably not back in the area for a long time), I was interested in checking it out. We hoped that the remoteness of the North Rim would give us a better chance at a tent site. No such luck - the campsites are mostly (or all?) reservation-only and of course the campground was full. (Of course it was! It was summer in the Grand Canyon, for pete's sake!) The visitor's area was packed too... So much for remoteness.

This will probably sound crazy but we didn't even drive the scenic route. We ended up eating lunch at the North Rim, taking a few pictures (really, just a few), and heading back toward Utah. 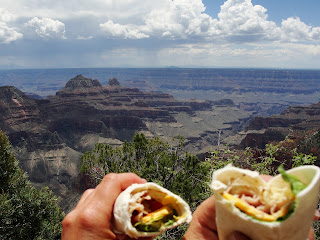 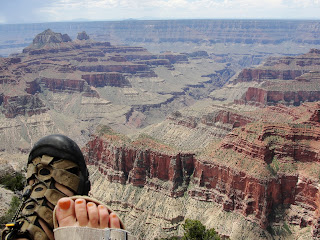 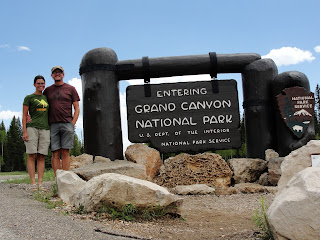 feels wrong to even count this as a visit
To make up for our poor showing at the Grand Canyon, though, we stopped by Pipe Spring National Monument on the way back to Utah.
Over the last 2000 years, Ancestral Puebloans, Paiutes, missionaries, explorers, and Mormon pioneers were all sustained by Pipe Spring. We didn't take the guided tour of Winsor Castle but we did explore the museum pretty extensively, and we also wandered around the grounds. 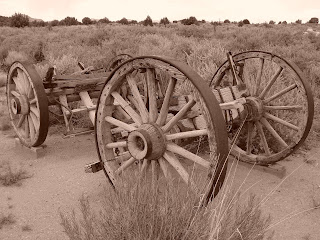 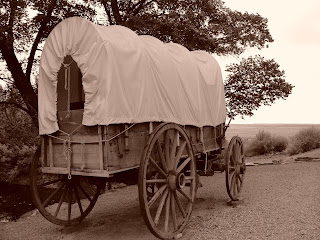 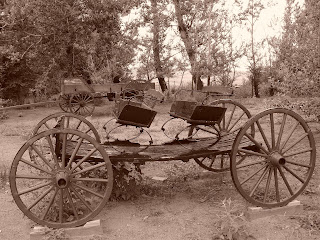 looks very comfortable
Pipe Spring has an interesting and extensive history, from its tribal farming days, to Brigham Young's desire to use the land to expand his church, to its standing now as a national monument. It also has a slightly unusual history - this fort was once used as a hideout for polygamous wives after this practice was made a felony in the late 1800s. 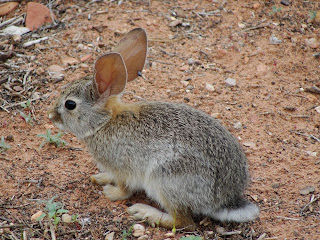 not a polygamous wife
Pipe Spring National Monument is managed cooperatively by the Kaibab Indian Reservation and the government, and as such it's the only joint Tribal-National Park Service monument. It's also probably the only place where the National Park Service encourages picking the plants - they have a large community garden and park visitors are welcome to take whatever vegetables they would like. It was a little odd, but also pretty cool! 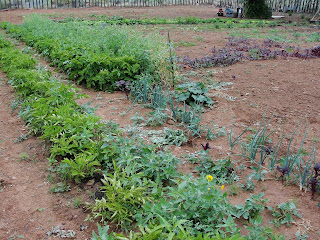 thanks for the onion and peas, Pipe Spring!
So that was our five hours in Arizona. Someday we'll get around to that backpacking trip down in the canyon...
Posted by Jen
Email ThisBlogThis!Share to TwitterShare to FacebookShare to Pinterest
Labels: camping, united states, us national parks, us road trip