Prior to Capitol Reef National Park, we'd spent about a week in Utah's deserts where temperatures averaged in the high 90s every day and everything was dusty and dry (when it wasn't thunderstorming, of course). After all that, Capitol Reef was like an oasis.

No, it wasn't like an oasis - it actually was an oasis. There are actual fruit orchards here. The Fremont River actually has water and runs freely. Green grass actually grows in the campground. We were actually comfortable for once.

Like Canyonlands National Park, we didn't really know anything about Capitol Reef before stopping by on our way from Arches to Bryce. Were we ever in for a treat... 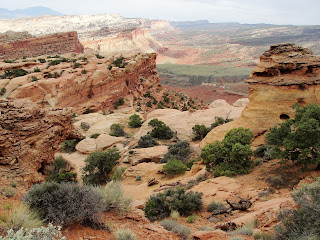 Capitol Reef was formed "between 50 and 70 million years ago when a major mountain building event in western North America, the Laramide Orogeny, reactivated an ancient buried fault. When the fault moved, the overlying rock layers were draped above the fault and formed a monocline." (Quotes from the National Park Service web site.) 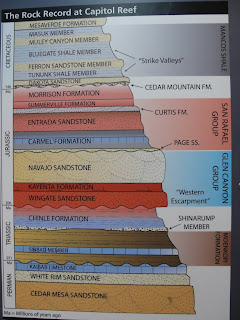 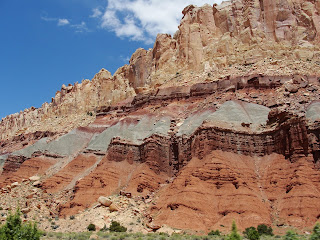 There is a Scenic Drive that goes about eight miles up through the canyons and back. It's a beautiful drive, for sure, but there is so much more of the park to see by foot!

The hikes. There may not be millions of miles of trail in this park, but there are enough to keep you busy for a few days. All trailheads are easily accessed from Hwy 24, the Scenic Drive, or the campground.

Day One: The ranger advised us that thunderstorms were coming our way, so if we wanted to get up high we should do it soon. We picked Navajo Knobs, one of the longer trails that we'd also seen recommended in a travel book (Moon maybe?). The 9.4-mile return trail promised 360° panoramic views of the park and boy, did it deliver on that promise. Here are just a few reasons why... 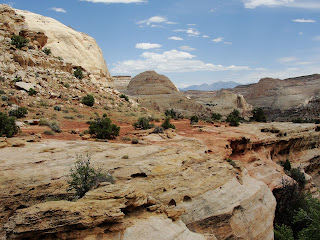 halfway to Rim Overlook, the halfway point to Navajo Knobs 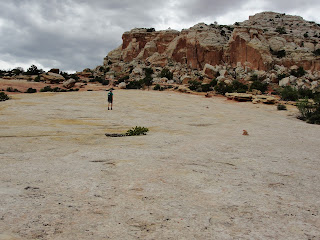 the trail on the way to Navajo Knobs 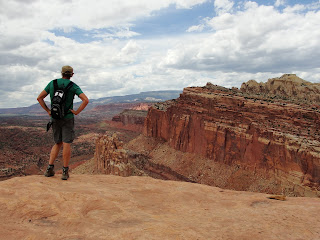 pausing to take it all in 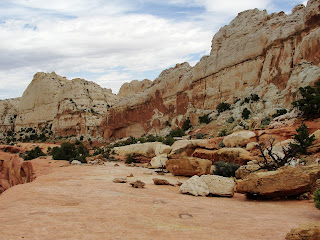 here the trail edges along the cliff 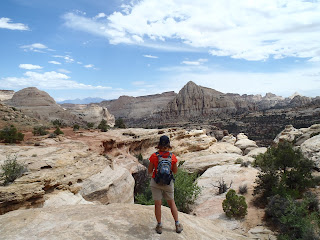 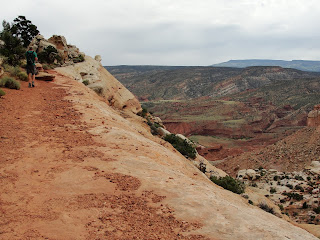 walking back from Navajo Knobs 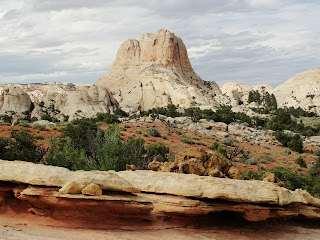 stellar views of the Waterpocket Fold 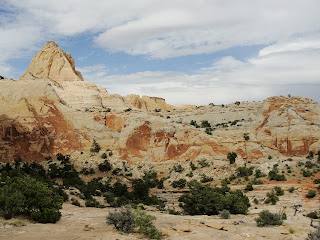 Day One also featured the best ranger program we'd heard yet. Ranger Hannah gave a talk on "soundscapes" - natural noises of the Capitol Reef area and the impact of human noises on the wildlife there. Car engines, RV generators, music, car alarms - these not only drown out the wildlife sounds, they also stress the wildlife noticeably. The park does what it can to reduce human noise, and there may even be a long term research study on the impact to wildlife (if it's not happening here, it's happening at one of the other parks we visited).

The talk was awesome overall, but the best part was when she played a sound byte of a high-frequency noise that's supposedly only audible to people under the age of 25. I heard it but Patrick did not. Take that, progressive-lens-needing-eyes and arthritic knees!

Day Two: Off-and-on thunderstorms were predicted all day so we decided to take the scenic drive. The Capitol Gorge was washed out from flash floods but we were able to stop at the trailhead for some lovely pictures. 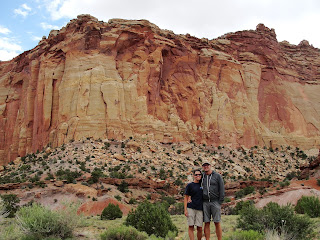 The rest of the drive was really pretty too. 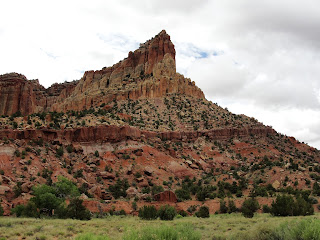 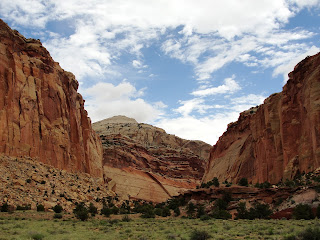 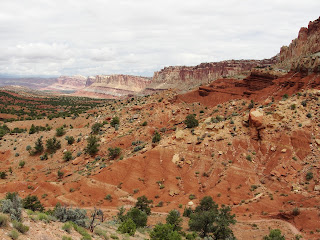 Grand Wash wasn't flooded out (that day, anyway) so we were able to walk the canyon for a bit before it started raining again. 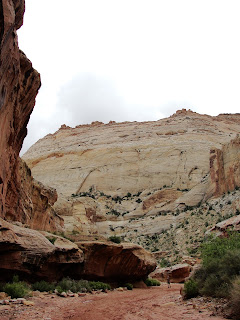 On the way to the ranger talk about the Fremont Culture petroglyphs (featuring Ranger Hannah again), we stopped by the Fruita School where dozens (!) of children were taught over several decades. 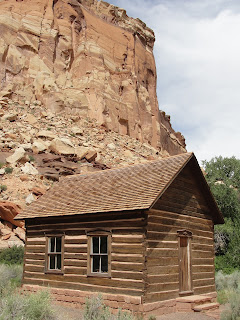 very Little House on the Prairie

The schoolhouse is just a small piece of Capitol Reef's history. From about 700AD the Fremont Culture lived near the river growing beans, corn and squash. Like those residents around Mesa Verde National Park back in the day, these natives packed up around 1250AD and moved on. White settlers began seriously exploring the area in the 1800s and shortly thereafter, the land was developed for orchards. Less than a dozen families at a time lived on the orchards. Today, if you visit during the right season, you can sample the fruit free of charge. Our timing was off but we did purchase several bags of orchard cherries at the Gifford Farmhouse.

All in all, a really interesting park.

The campsite. Fruita Campground was probably one of our favorite national park campgrounds. It was busy but spread out across a large meadow, so it didn't feel crowded. Deer visited the meadow in the evenings. The campsites and parking spaces were huge, and even though we could see all of our neighbors we were surrounded by green trees and green grass so it didn't really matter. 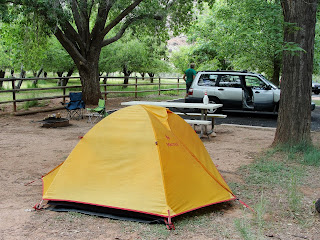 campsite #33 for the win

The campground filled up both nights and on our last morning we awoke to some tent campers sleeping in our parking space. The camp host told us we should charge them $10 (half the cost of a tent site) but we let it go... We did have a word with them before we left, though. Just another disappointing example of inconsiderate tourists.

The food. Nothing too exciting... 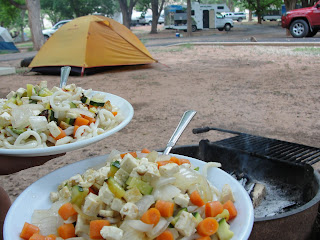 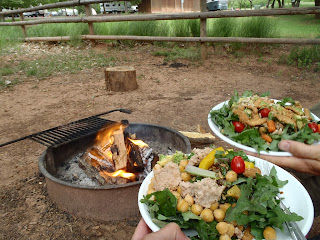 Actually, there was one exciting thing. Gifford Farmhouse is just a short walk from the campground. Their homemade cinnamon rolls and pies sell like hotcakes! We were lucky to get a cinnamon roll one morning but we missed out on the pies. (Our reason to go back?) 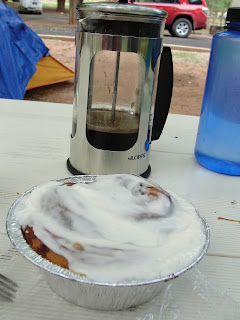 it's no Cinnabon®,
but it'll do

The summary. Don't just drive through Capitol Reef National Park. Stop and explore. There is untold beauty all around.  Just look here for more proof... 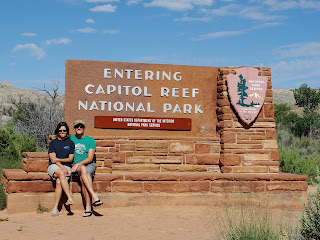 Next up, more Disneyland crowds at Bryce Canyon National Park... Hoping we can get off the beaten path there!
Posted by Jen
Email ThisBlogThis!Share to TwitterShare to FacebookShare to Pinterest
Labels: camping, united states, us national parks, us road trip