Not really roughing it in New Mexico's state parks.

We've already mentioned the awesome state park map that helped us choose our New Mexico adventure. Now it's time to give proper credit to the state parks themselves.

First things first. At this point, we'd been on international and domestic roads for ~25 months. Our FUNemployed lifestyle definitely didn't support regular motel stays here in the US no matter how cheap the motel. Averaging around $14/night, New Mexico's state park campsites were perfect for our budget.

It wasn't just the cost that appealed, though.  Each park we chose was near water (two were on lakes and one was on a river), and a quick drive-through showed each park to be clean and fairly spacious - all important factors in our campground selection process.

First up was Bottomless Lake State Park right outside of Roswell. We could've gotten a basic tent campsite for $10 but the hookup sites were only $14 and we needed to charge some electronics. As an added bonus, the site we chose was close to the wifi (what?! there's wifi?!) and a modern bathroom with showers. 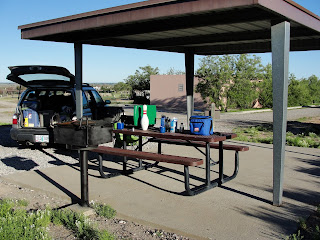 Apparently you can swim in the lake but we were more interested in hauling almost everything out of the Subaru and doing some much-needed car cleaning and rearranging that afternoon. We were able to put our stuff on the concrete pad instead of in the dirt - that alone was worth the extra $4. Charging my camera battery at the campsite (instead of in the shared bathroom, where I wasn't worried about theft but I was worried about sloppy hand-washers) was the gravy.

It was finally dry so we laid out the tablecloth and napkins. We even set out the tea candles and ate dinner like civilized people for a change. 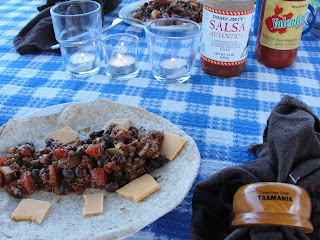 Coyote Creek State Park was our next stop. We chose it because it was situated between Roswell and Taos, and honestly, we needed a break from long drive days. It turned out to be one of our favorite campsites on the whole two-month road trip. 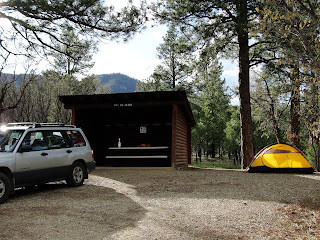 campsite #14 for the win 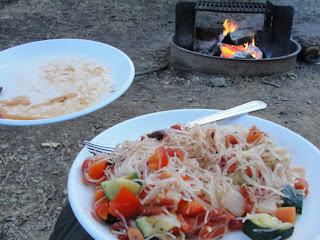 The camp hosts were really friendly and encouraged us to take a walk along the short nature trail. So we did. 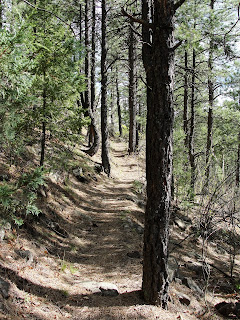 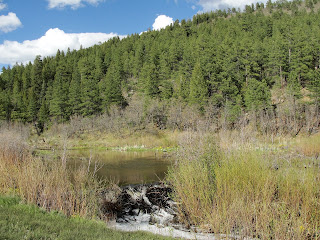 ... and the trail gave a nice view of the creek

We didn't see or hear any coyotes but we did take note of the campground's playground, made entirely of recycled materials. 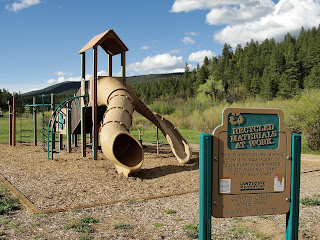 they reduced and reused too

Coyote Creek State Park also had wifi and showers. It was quiet and peaceful. We liked it a lot.

Cimmaron Canyon State Park was our final stop in New Mexico. We had already decided to drive the Enchanted Circle Scenic Byway so we knew we wanted a campground close(ish) to that... Cimmaron Canyon fit the bill. It was a bit crowded but unlike most of our national park camping experiences, everyone there was really quiet, friendly, and respectful of personal space. 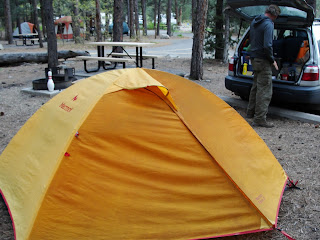 we could see many of the campsites from #49,
but that was okay because... 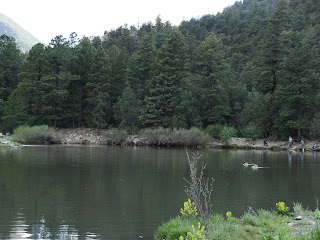 ... we could also walk 2 minutes,
cross a little bridge, and sit by the quiet lake

We didn't eat out in New Mexico and yes, this is a crying shame. But we did try to make up for it at Cimmaron Canyon State Park by incorporating tortillas, cheese, and avocados at almost every meal. 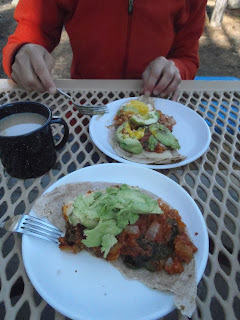 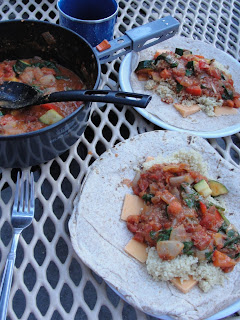 Our tent site was in the middle of everything but that had its privileges, too. One day we got back from a long hike to find a giant party setting up in the common picnic area right in front of our tent. "Greeeaaaat," we thought. But they were teachers celebrating the end of the school year, and they were really polite and nice, and they shared their delicious barbecue feast with us! (And they were gone by 8:00pm!) So it was all good. 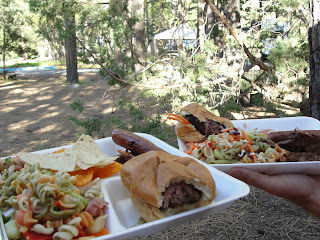 No showers or wifi at Cimmaron Canyon State Park. No beer within a 30 minute drive, either... Our lakeview tent site and proximity to the Enchanted Circle Scenic Byway made up for those things, though.

Yep, New Mexico's state parks were really great. There are many BLM campgrounds in that area too (we drove through many of them and we highly recommend Elephant Rock on the Enchanted Circle). And if you're really adventurous you can camp almost anywhere in the forest instead of at an official campground. Showers, schmowers - it's drought season anyway.

Now, if New Mexico's campgrounds were really great, Colorado's were sure to be even better...
Posted by Jen
Email ThisBlogThis!Share to TwitterShare to FacebookShare to Pinterest
Labels: camping, united states, us road trip