On not messing with Texas, part one.

Henry Rollins allegedly once said, "Texas is as odd as it is vast." Not sure about the "odd" part, but we definitely agree on "vast" - it took us four days to get from southwest Oklahoma over to Guadalupe Mountains National Park in northwest Texas. Four days! And we even took highways the whole time!

Since we had to endure four days of Texas, you should too, so I'm going to break the Lone Star state summaries into four parts: northern, central, western, and overall. First up, the north... 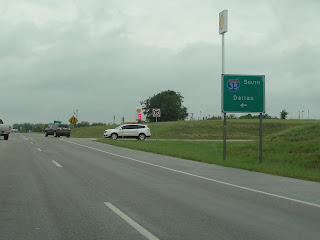 and so it begins

To save time we stayed on highways for the most part, where there really wasn't much to see. 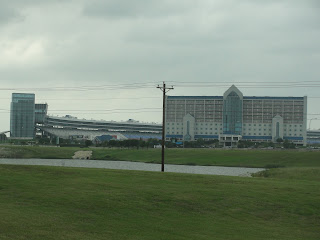 except for maybe the GINORMOUS Texas Motor Speedway

A lot of it looks like this from the highway, actually: 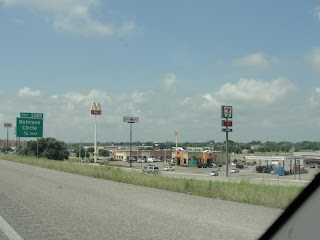 (on the upside, with McD's comes clean bathrooms
and free wifi)

We planned a stopover in Dallas hoping to catch an old friend but she had a family emergency. With no state parks nearby we ended up at the Motel 6 in Waxahachie just south of Dallas. 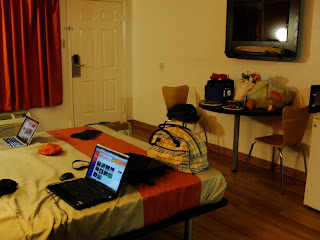 Later I learned an interesting factoid from a Texan friend: "Back in the 80s, they planned to build the biggest super collider in the world in Waxahachie. The thing was going to be about 20 miles in diameter and mostly underground. They bought up all the land and moved people out of their homes. They even figured out how to deal with the fire ants. Property values near the site soared, as did expectations. That's when the funding died and everything went to weeds. Europe got their act together and built the The Large Hadron Collider and they are now the center of the universe for particle physics. To think that it could have been little ol' Waxahachie."

Neat. But if it had been little ol' Waxahachie, our motel would have cost more than $45, that's for sure.

There's not much in the way of tourism nowadays, other than an elaborate Romanesque courthouse ("considered by many to be among the most beautiful of Texas's older courthouses" according to Wikipedia) and Gingerbread houses all around town. We wouldn't know anything about those. We did laundry, and we enjoyed the high speed internet and air conditioning at the motel... and then we got the heck out of Waxahachie. 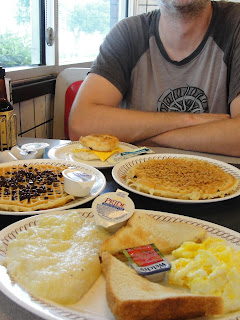 From the Dallas suburbs we headed south toward Austin, stopping in Waco. No, not for this, or this (happening while we were en route!), but for this: 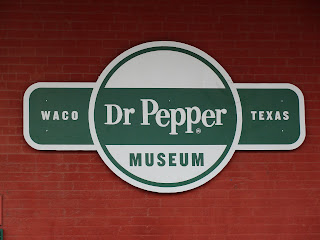 We hardly ever drink soda but when we do, it's a Dr Pepper (a fact we just learned about each other on this road trip). So when we found out that we'd be passing right by the museum we had to stop. Sadly, admission was $8 each and we don't like Dr Pepper that much, so we declined. 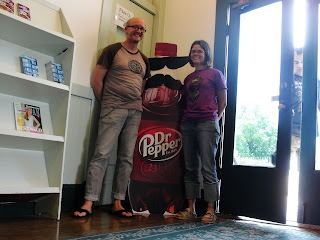 we did opt for the free ridiculous photo op
and $0.80 fountain drinks, though

The ticket lady was pretty disappointed that we weren't interested in the museum; apparently it's having some financial trouble these days. Actually, a lot of Waco looked like it was having financial trouble in spite of a recent economic boom. This was something we noticed throughout the south, too - living conditions in some of the small towns we drove through appeared on par with small villages in third world countries we'd visited. It was a bit shocking and depressing.

More on that later. What was not depressing was the Texas method of advertising: 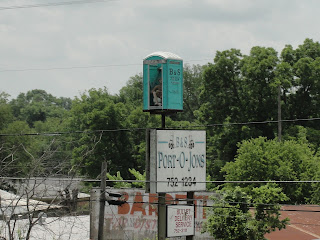 We also saw an actual U-Haul and an actual semi truck perched on posts high above the freeway...

But mostly we just saw the freeway. Miles and miles and miles of freeway. On that note - to Austin!
Posted by Jen
Email ThisBlogThis!Share to TwitterShare to FacebookShare to Pinterest
Labels: camping, united states, us road trip