I had to make an unexpected trip to North Carolina right before our British Columbia housesit ended in mid-January. After three weeks here, I must admit that while the flatlands of Rocky Mount pale in comparison to the snow-capped Canadian Rockies, the southern hospitality has definitely been a welcome change from Vernon's unpleasant vibe!

If you've never experienced southern hospitality, here's how it works: Men go out of their way to open doors for me. People chat with me in the grocery store line (and several folks have insisted that I go ahead of them when I had fewer items than they did). "Sir," "Ma'am," and "pardon me" are the norm. Folks I pass on the street look me in the eye, ask "how you doing?", and actually wait for a response. People will "bless you" for just about any reason. (This is not to be confused with "bless your heart," which basically means "you're an idiot.") Driving around town I haven't been honked at once for not going as soon as the light turned green, and four-way stop signs have usually involved lots of waving.

In addition to acclimating to this southern hospitality, I've had to adjust to the southern accent. Dad has a bit of a southern drawl and most of Mom's extended family in Maryland use common southern words and phrases, so I know what a "clicker" is and what someone means when they're "fixin' to" do something, and that sort of thing. But my family's accents are not as strong as the ones down here and I've definitely had to tune my ear.

(And then for added fun, one weekend my Jersey cousins came down to visit and I had to tune my ear again... 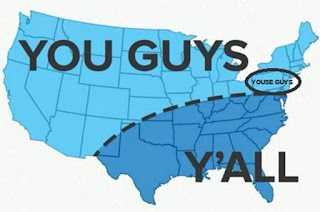 And then for even more added fun, Dad and I took a weekend trip up to Maryland where I could understand everyone just fine, but extreme rudeness, terrible drivers, and expensive gas prevailed. Seriously, how do you Marylanders do it?)

This is the most time I've spent in North Carolina to date, and although I could never live here myself I can see why northerners flock south. My only beef with the state so far is that they have no idea how to deal with inclimate weather. My visit coincided with Snowpocalypse 2016, and half the state shut down for a few days. 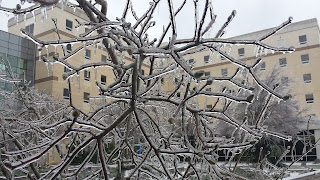 Granted, you could say the same about Portland... But to be fair, Rocky Mount's fallen-tree-branch-due-to-ice-storm collection service was pretty darned efficient. Definitely can't say that about Portland!

Speaking of Portland, they keep it weird in Rocky Mount and the surrounding areas, too. 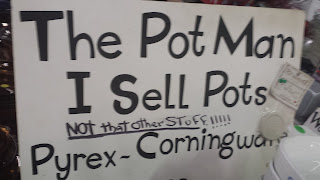 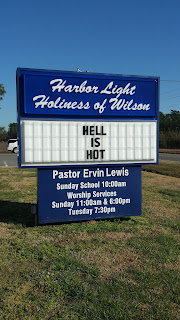 queued for next week:
"road to hell paved with unbought stuffed dogs" 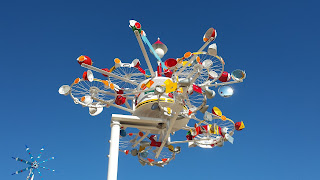 And on the food note, if you find yourself in the area and hungry, the barbecue in Rocky Mount isn't so great but the Highway Diner, El Tapatio, and Mama's Pizza more than make up for that.

Anyway. While I tended to some family things on the east coast, three cute cats and a lovely little house on Orcas Island, WA were awaiting our attention. As soon as our Vernon housesitting hosts got back, Patrick made his way over to Vancouver and then down to Washington to our final housesit for the foreseeable future.

Along the way he enjoyed some sights... 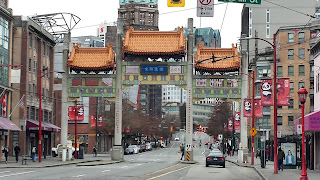 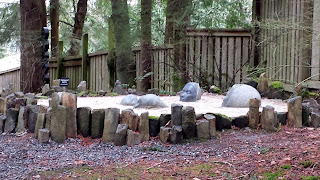 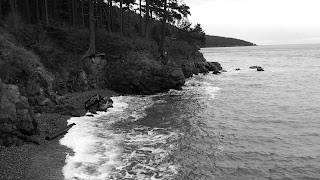 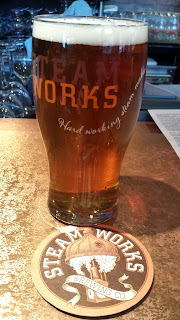 some of Vancouver's finest 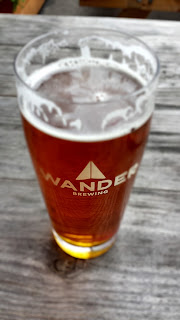 some of Bellingham's finest

He also met up with fellow travelers Gillian and Jason of One Giant Step - thank you again for your hospitality, new friends! I'll meet you somewhere, someday.

In a few days I'll join Patrick on the west coast for the rest of our Orcas Island housesit. Looking forward to some nice hikes, lots of cat time, and that lovely Pacific Northwest winter weather - adjusting to this bright and sunny sky here in North Carolina has probably been my biggest acclimation!
Posted by Jen 8 comments:
Email ThisBlogThis!Share to TwitterShare to FacebookShare to Pinterest
Labels: canada, housesitting, united states

About that Vernon, British Columbia housesit...

"Let's housesit in the mountains for the holidays!" we said. "Seeing that part of Canada in the winter will be great!" we thought. "Getting snowed in, watching movies and reading books all day, hanging out in the hot tub - it'll be fun!" we told ourselves.

And it was fun... for about a week. Unfortunately, we were there for five weeks and it turns out that all play and no work makes Slowly Global pretty darned cranky.

First things first: our hosts' home in Vernon, British Columbia was really lovely - a great kitchen, plenty of space, an outdoor hot tub under the stars, a comfortable bed, all the Netflix and televised hockey our hearts desired, fun board games to supplement our collection, a lovely view of the lake and mountains, helpful neighbors who helped us plow snow from the driveway, a well-stocked local library (our hosts kindly lent us their card)... and did I mention the hot tub?

Their animals were hilarious, sweet, and fairly low-maintenance too. 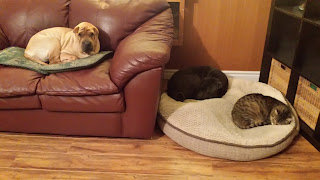 Roxy, Obi and Boston most of the time 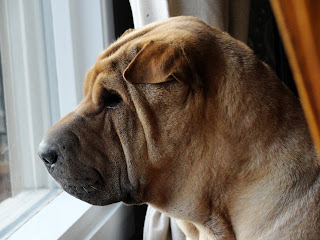 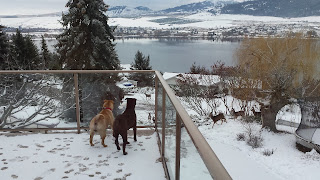 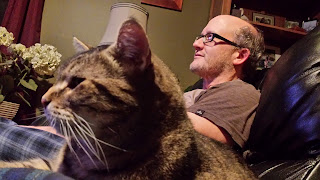 Boston watching the Bruins lose
(this would happen on several occasions) 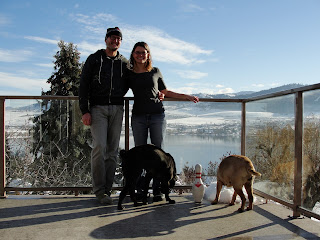 But Vernon itself is just a weird little town. It's roughly the size of Corvallis, which means it's actually quite large for a Canadian city. It has "one of the best North American ski resorts" nearby and three beautiful lakes scattered around the city, including that one in the picture above.

According to Wikipedia, in 2005 Vernon was ranked as one of the top six most desirable communities to retire in North America by Consumer Reports. (This explains all the "50+" activities - bingo, bridge, square dancing, chair yoga - in the Community Happenings section of the Morning Star, Vernon's thrice weekly newspaper.)

We had to wonder if that ranking still holds today. The economic situation of the area is quite poor - there are at least 10 liquor stores within a few miles' radius downtown; every week the Morning Star featured several articles about break-ins or homes/cars getting set on fire or businesses closing; and in addition to the "50+" activities, the Community Happenings listed weekly support meetings for every "anonymous" reason under the sun.

People drove like maniacs, even in snowy and icy conditions. Homeowners had menacing, barking dogs behind fences. The residents were not nearly as friendly as we'd come to expect in Canada. It was like a much, much colder version of the Big Island, actually, and we only ventured out of our quiet neighborhood every third day or so because of all this.

Our occasional cultural outings included a visit to the Vernon Public Art Gallery, cheering alongside the locals at two Vernon Vipers hockey games, and touring the Okanagan Spirits Craft Distillery (where we walked out with a reasonably-priced bottle of the best gin we'd ever tasted). 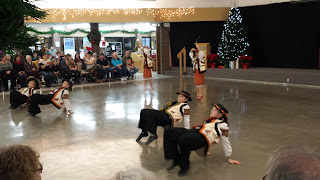 (As an aside, afterward I was wondering about the large Ukrainian population in the area so I did a little research. Turns out, during WWI more than 8,500 people across Canada were interned under the War Measures Act of 1914 which gave the government power to inter or detain anyone they thought might be an "enemy alien." A lot of these people were of (completely innocent) Ukrainian descent; many were women and children and many were Canadian citizens. Vernon was one of 24 camps across Canada where internees were forced to do heavy labor. Most camps lasted just a few years but Vernon's camp lasted 6 years. Unfortunately, most of the written and verbal history of camps across the country during this time has been lost. Insert cliche-but-relevant quote about those not remembering the past being condemned to repeat it. End of aside.) 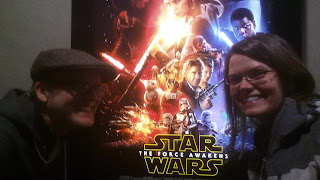 at the "Galaxy Theater" in Vernon, of course! 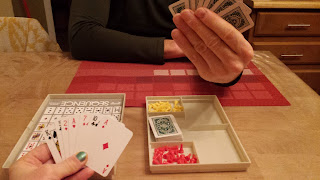 We read 10+ books between the two of us. We watched Master of None, Cabin in the Woods, and reruns of Farscape. I (finally!) watched Still Alice, binged on additional Whedonesque shows, and caught up on old episodes of The French Chef from the library. We had a Sherlock marathon one day.

We had the benefits of Vernon's indoor farmer's market, a lovely gas stove, and a ridiculous amount of spare time, so I cooked A LOT. Beet pancakes, homemade pizza, vegetable soup, tofu curry, multigrain bread. International recipes like Moroccan vegetarian couscous tajine, Polish(ish) stuffed cabbage, Turkish pide, Tuscan spaghetti squash pasta, and a homemade Chinese spread for our Christmas dinner (wontons are so easy, who knew?!). And, of course, Canadian staples of beaver tails and Kraft Dinner for our Winter Classic lunch. 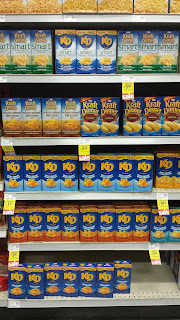 if I had a million dollars
we wouldn't have to eat Kraft Dinner
(but we would!)

Unfortunately we were too early for Vernon's Winter Carnival (the biggest in western Canada) and skiing at Silver Star proved to be cost-prohibitive. There were plenty of cross-country and snowshoeing trails around, and it would've been easy to rent equipment for a day, but quite honestly it was way too cold for us wimpy Pacific Northwesterners, especially since the sun really only made a few appearances during our whole stay. 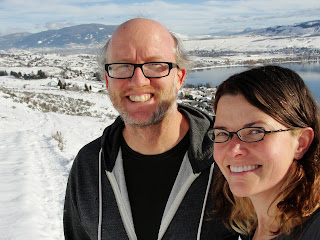 It's all good, though. We have definitely learned that long-term housesits in snowy mountain towns are not for us, so that was good. Our American dollar was strong in Canada (and wine was pretty cheap!) and that was also good. At this stage we're just biding time until spring, really, so we'll just chalk up our time in Vernon to winter hibernation in prep for what should be a pretty crazy year starting this April.

Next up: a quick Pacific Northwestern tour, and then four weeks on lovely Orcas Island! Been looking forward to this housesit since last summer...
Posted by Jen 16 comments:
Email ThisBlogThis!Share to TwitterShare to FacebookShare to Pinterest
Labels: canada, housesitting
Newer Posts Older Posts Home
Subscribe to: Posts (Atom)