Arches National Park is one of those iconic places that everyone knows about and everyone wants to visit. And for good reason - it's absolutely stunning. 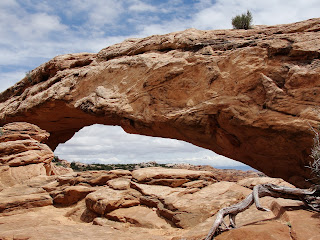 exhibit B
(vistas from the Devil's Garden trail)
It's also very crowded. 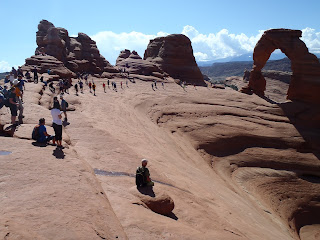 exhibit C
(Disneyland at Delicate Arch)
Granted, we did visit on a Friday and Sunday on a busy weekend in June, but I have a feeling it's like that all the time.

Anyway. We spent two full days driving the scenic drive, hiking the various hikes, and checking off every arch and viewpoint on the map. (No kidding - every single one.) We stretched out our stay to two days because we could, but you really don't have to drive or walk far to see many of the amazing sights. Time-crunched travelers could probably see enough in a few hours.

The hikes. This is mostly a drive-through park but there are a handful of areas where you can get off the beaten path for an hour or three.

Day One: The 7.2 mile Devil's Garden hike is billed as "primitive," "difficult," and "longest of the trails" - which, to us, translates to "less crowded" - so we headed straight for that one first. The trail features several of the park's more secluded arches, a giant upright rock formation, and miles of beautiful "fins" in the landscape. 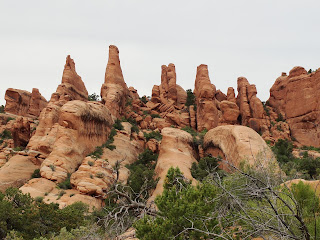 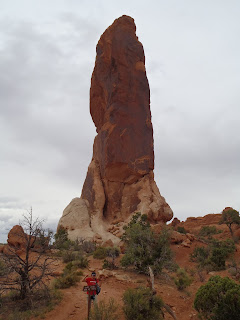 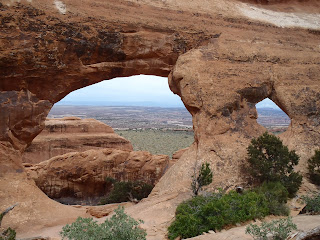 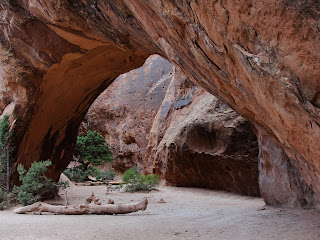 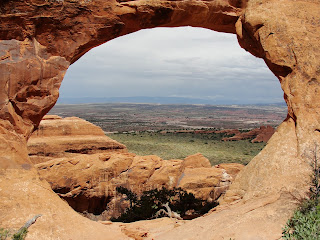 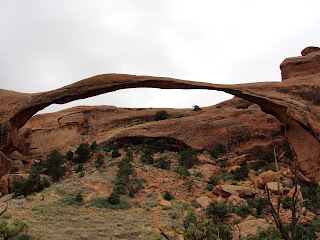 Landscape Arch
Parts of the trail were normal trail; other parts were definitely "primitive." 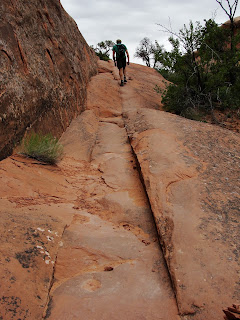 hiking up a fin 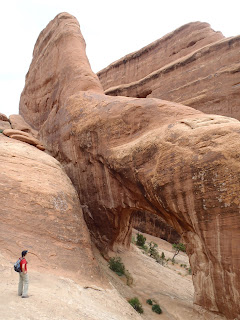 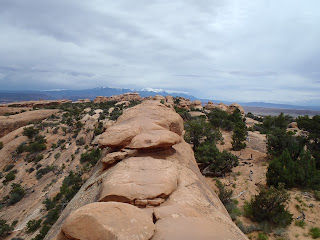 the trail
(a long fin with a 50' drop on either side)
We also hiked the ~2 mile Broken Arch/Sand Dune Arch trail that day. Both were much more accessible and therefore more crowded. These arches also featured tourists climbing on the arches and getting way too close to areas that were marked with signs saying "dangerous, don't get too close" due to recent rockfalls.

Seriously... Arches was the first park where we saw people routinely disrespecting park regulations by tromping over the cryptobiotic soil and scaling rocks; while rock climbing is allowed in some areas, the park specifically prohibits climbing rocks with openings greater than three feet. Most frustrating was watching young children run all over the place while their parents egged them on. This trend would continue over the next several parks in Utah.

[Begin soapbox.] Park rules exist to protect both the natural beauty of the park and the safety of visitors, and the National Park Service doesn't have the funds to properly staff parks to ensure that the rules are enforced. Parents, it's up to you - please teach your children to respect our national parks! [End soapbox.]

Day Two: First was a short, hot hike up to Delicate Arch. 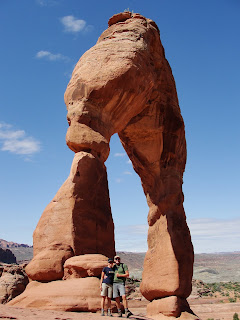 mandatory photo op
From there we headed down to the Windows Section and walked the "primitive" path. (Apparently they weren't too creative with names in this area of the park!) 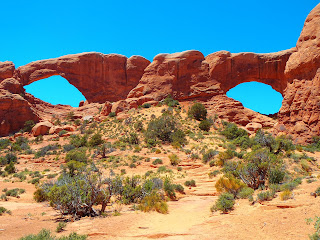 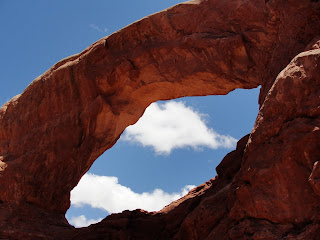 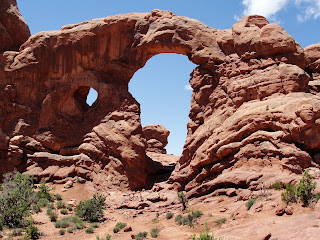 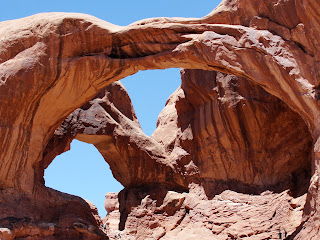 Double Arch
(at least it wasn't sponsored by McDonald's)
And of course we stopped at Balanced Rock... 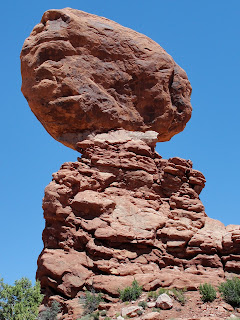 three school buses big
That's right, Arches National Park isn't just about arches. Many of the rocks scattered throughout the park are like clouds and we had fun "rock spotting" during our walks and drives. Some had actual names on the park map... 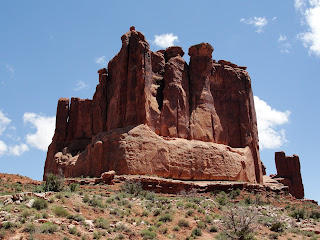 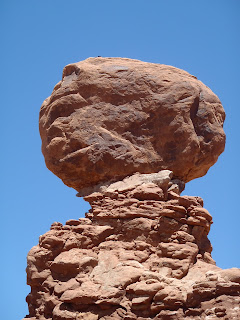 Ham Rock
Others, we named ourselves. 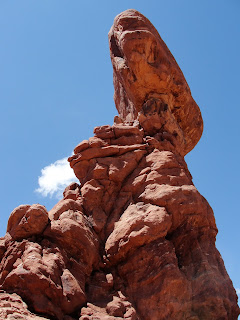 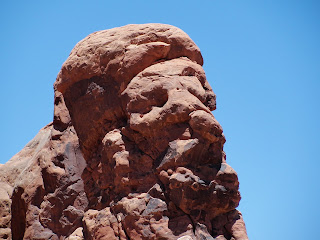 Abraham Lincoln Rock
We stopped at the remaining viewpoints and ended the day with a stroll through Park Avenue, a gorgeous canyon with rock walls towering on either side. 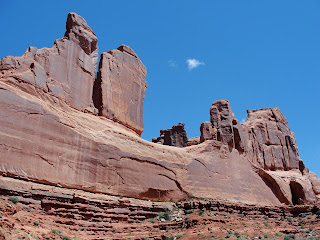 Manhattan skyline, eat your heart out
Many, many more pictures here... It's quite a photogenic place.

The campsite. There is a campground at Arches National Park but it was full that weekend. Almost everything was full that weekend, actually - the rodeo was in town and there was also a marathon happening. There are BLM campsites all around Moab but honestly, we just didn't feel like driving around for hours to maybe find a campsite so we sucked it up and stayed at Arch View Resort. 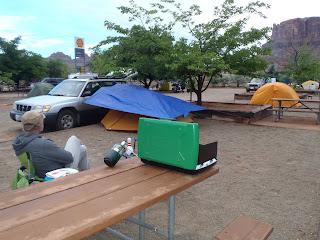 our first and last RV park
It had showers, laundry facilities, wifi, a market that sold beer, and a lovely view of the gas station from the median strip where they put tent campers. For RVers, it was perfect. For us... not so much. 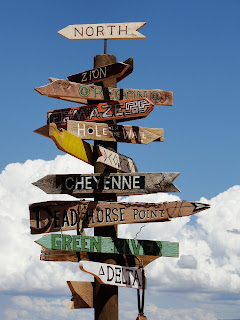 best thing about the RV park
(see third arrow from top)
In hindsight we should've planned in advance and stayed at Dead Horse Point State Park, where we could've seen the location of that scene in "Thelma and Louise" where they drive off the cliff. Next time!
The food. We held off on hot dogs until just the right campsite... the RV park in Moab was just the right campsite. 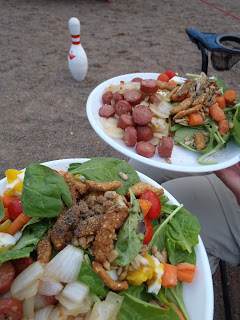 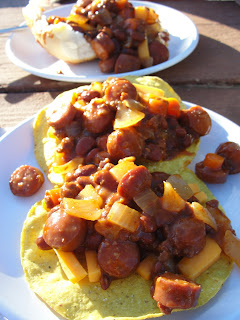 franks and beans and cheese
The summary. Arches National Park was gorgeous and definitely worth visiting. Two full days was probably overkill, and fairly overstimulating too. Near the end of our visit we'd see a beautiful rock formation and say, "oh look, a beautiful rock formation" and then we'd talk about what we wanted for dinner, because our brains just couldn't take any more densely-packed beauty. If we were to do it all over, we probably would have spent just a day in the Devil's Garden area and moved on. 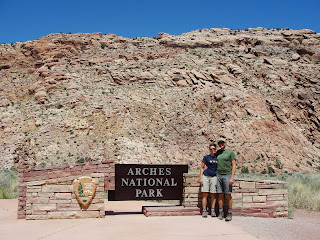 still a good time though!
Or maybe we would have visited in March or October when it wasn't so crowded. At any rate - two down, three to go!
Posted by Jen
Email ThisBlogThis!Share to TwitterShare to FacebookShare to Pinterest
Labels: camping, united states, us national parks, us road trip