Well... because it was on the way, and we'd never been, and we were curious. Why not? Here's what we found out about this fascinating national park.

Most important - it's very much alive! Death Valley is home to more than 1000 species of plants, 50 of which are found nowhere else in the world, and many species of mammals, birds and reptiles.

People have also thrived here and continue to thrive today. We watched a video at the visitor center where tribal members lamented the English name of their land. "The Timbisha Shoshone Indians lived here for centuries before the first white man entered the valley. They hunted and followed seasonal migrations for harvesting of pinyon pine nuts and mesquite beans with their families. To them, the land provided everything they needed and many areas were, and are, considered to be sacred places." (Quotes from the National Park Service web site.)

Hot, harsh, and very much alive. 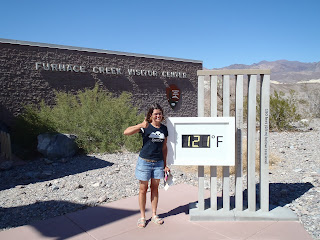 obviously
Most of the hiking is backcountry and we'd love to go back one winter to explore, though.

We drove around most of the park during our short visit. Our Nevada friends had warned us that the "lowest point" was not terribly exciting so we skipped that photo op, but we did enjoy the occasional road sign letting us know we were -102' below sea level. 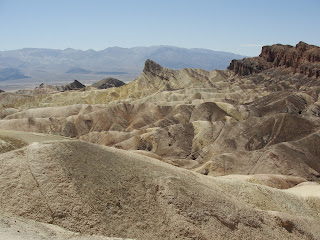 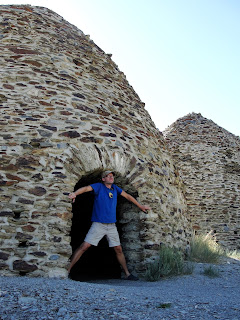 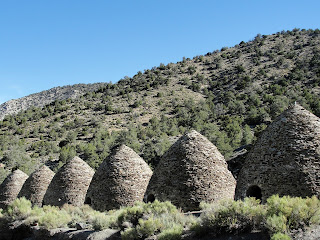 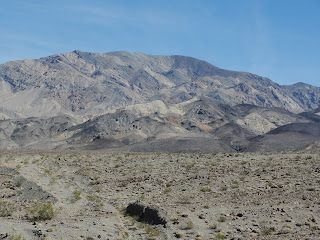 Panamint Valley
The views were all pretty spectacular even from the road, and those charcoal kilns were really impressive. A few more photos can be found here...

The campsite. With temperatures predicted over 120°, we were not even considering camping here. After talking with the park ranger we learned that Wildrose Campground was at a high enough elevation that camping would be really pleasant (80° during the day, 60° at night), so we gave it a shot. 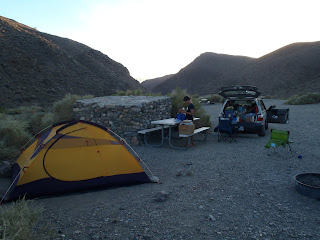 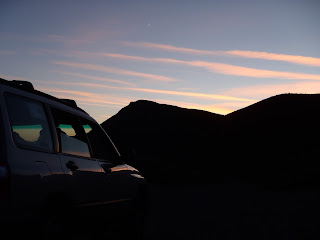 the sunset just made it all the better
Eventually a few other campers joined us but the campground was so large that we didn't really see them until the morning.

The food. Before we left Zion one of our camp neighbors offered us some of their spare food so they wouldn't have to carry it home. Normally we pass on canned vegetables but we made an exception for free beets. 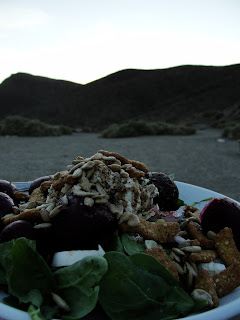 Death Valley beet salad
The summary. We obviously went during the wrong season; we'd love to go back in cooler weather or even in early spring after a rainfall when the wildflowers pop. The drive through Death Valley National Park was pretty stunning in the summer, though... 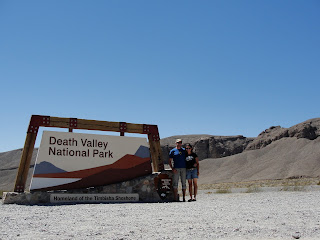 don't rule it out!
Only two more national park summaries to come... And then I (finally) get to write about how weird it is to be back in Portland after two years of travel!
Posted by Jen
Email ThisBlogThis!Share to TwitterShare to FacebookShare to Pinterest
Labels: camping, united states, us national parks, us road trip