What we'll miss - and not miss - about Thailand.

We can't say that Thailand was our favorite country out of the 13 we've visited so far, but we (mostly) enjoyed our two months of exploring. As predicted, we preferred the north to the south; the western part of the northern Mae Hong Son loop was definitely a highlight.

Here are a few things we'll miss about this well-traveled spot in SE Asia...

The diversity. Not just the ethnic diversity - which we really appreciated, from the hilltribes in the north to the Burmese border towns - but also the more subtle diversity you probably wouldn't notice coming straight from Big City, USA on holiday. We came from Vietnam and Lao so we noticed. Men with straggly long hair and beards, women with stylish pixie cuts. Tattoos, gangsta clothes, Metallica t-shirts. Sleeveless tops and above-the-knee skirts. Ladyboys, tomboys. Country line-dancing instead of karaoke. That sort of thing. It was nice.

The water refilling systems. You can't drink the water anywhere in SE Asia and we cringe when we think about how many plastic bottles we've gone through since March. We try to buy the giant 5-liter jugs when we'll be in a town for more than a night or two, just to save on plastic. But Thailand has this neat system where you can refill used plastic bottles with purified water for a fraction of the cost of a bottle of water at the store. 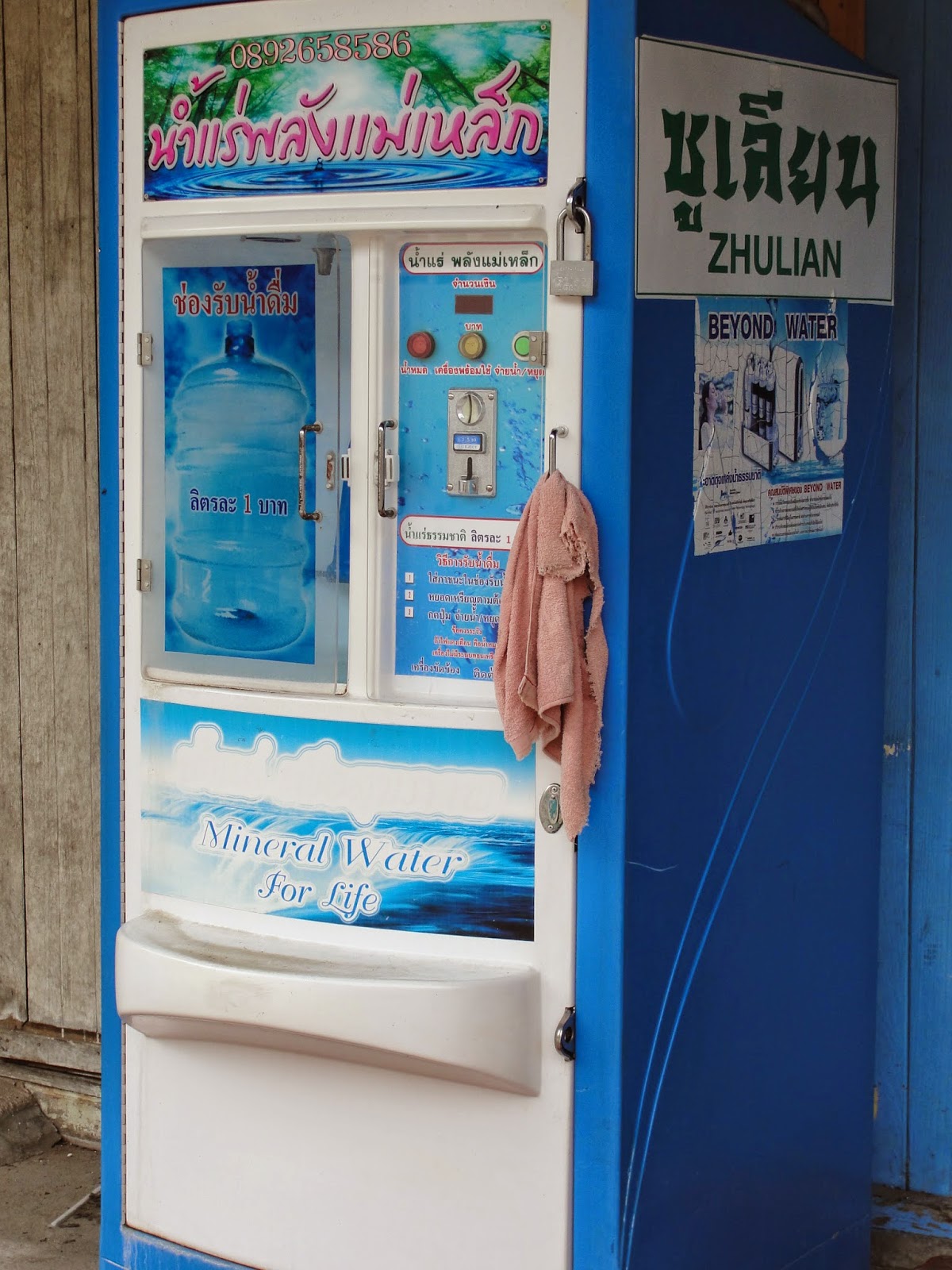 really great... when they work

They're usually in neighborhoods or otherwise off the tourist path so you kind of have to be "in the know" to find them. We only ran across a handful of machines and we were only successful in using one (another was broken, other times we were leaving town and didn't need to cart 5 liters of water with us), but just the fact that they exist made us happy.

The cultural pride. Not just hilltribe cultures - which we loved learning about - but Thai culture in general. Several cities played the national anthem over loudspeakers at 6pm sharp, resulting in that weird sci-fi "pause" in activity as people stood at attention. Thai museums and historic sites proudly told of their country's heritage (usually in English, sometimes in reeeeeally greeeeeat deeeeetail).

And Thai people love their king! The guidebooks warn you to never speak badly of His Majesty. Monuments and ginormous photographs of past and present kings are everywhere, and every city seems to have at least one main street named after a past or present king. 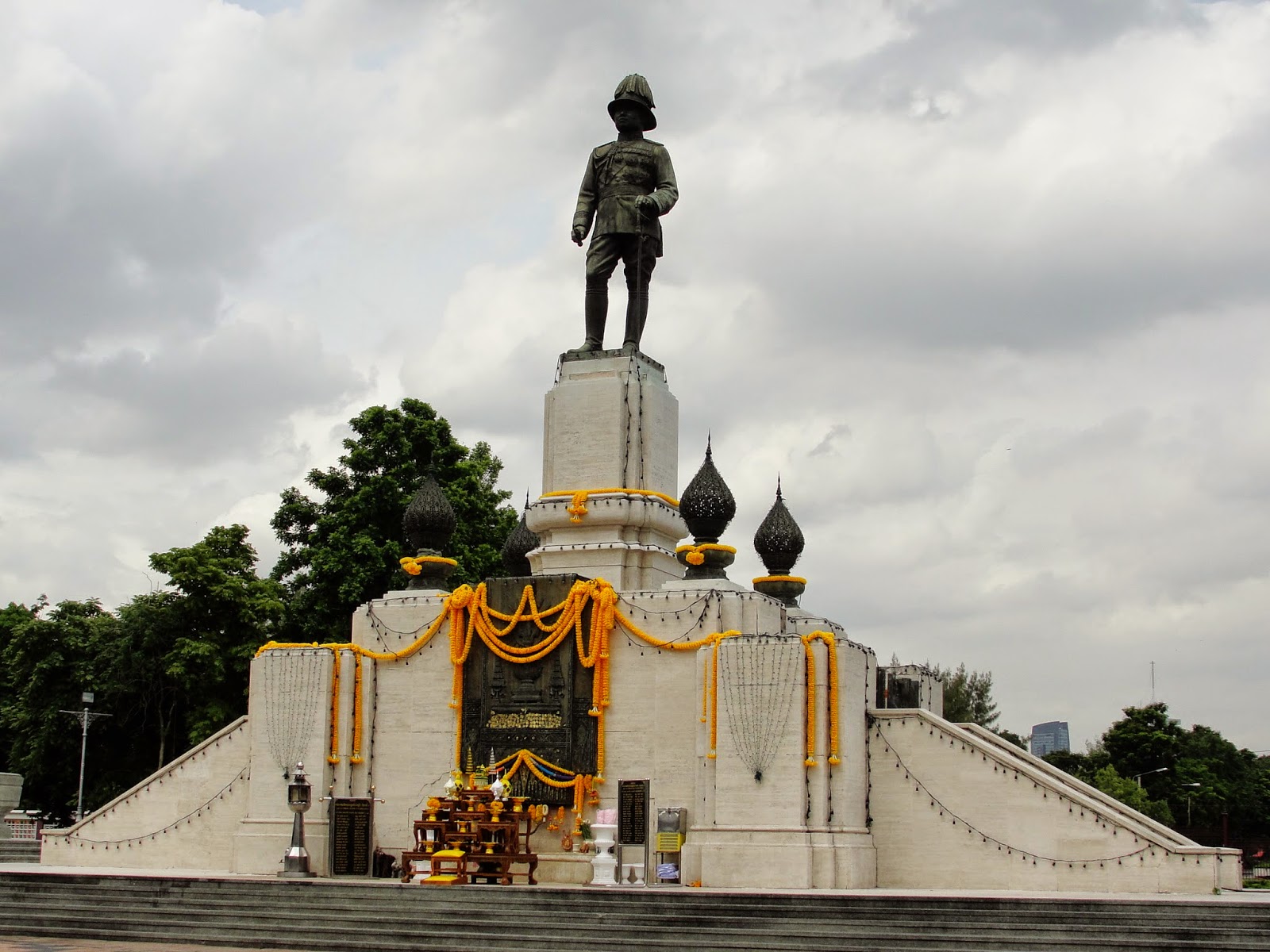 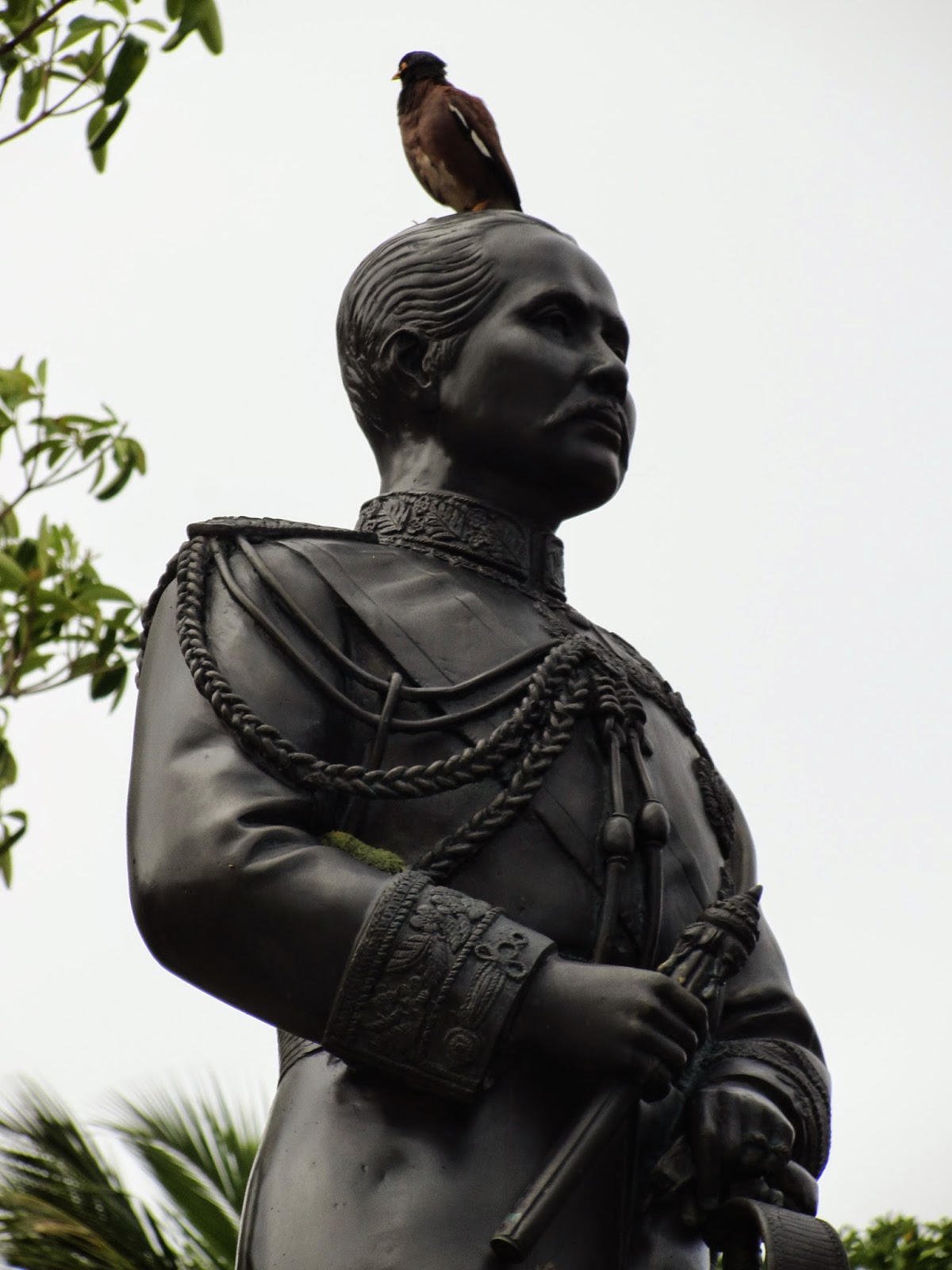 even memorialized on farang-o-rama Koh Tao

Bus drivers would honk as they passed monuments and passengers would stop mid-conversation to turn and bow their heads. Yep, they love their king.

The public transportation. It was so easy to get everywhere. The bus and train stations had clear signage, the roads were paved, the rides were pretty smooth, and we were never on a bus or train that was overbooked. 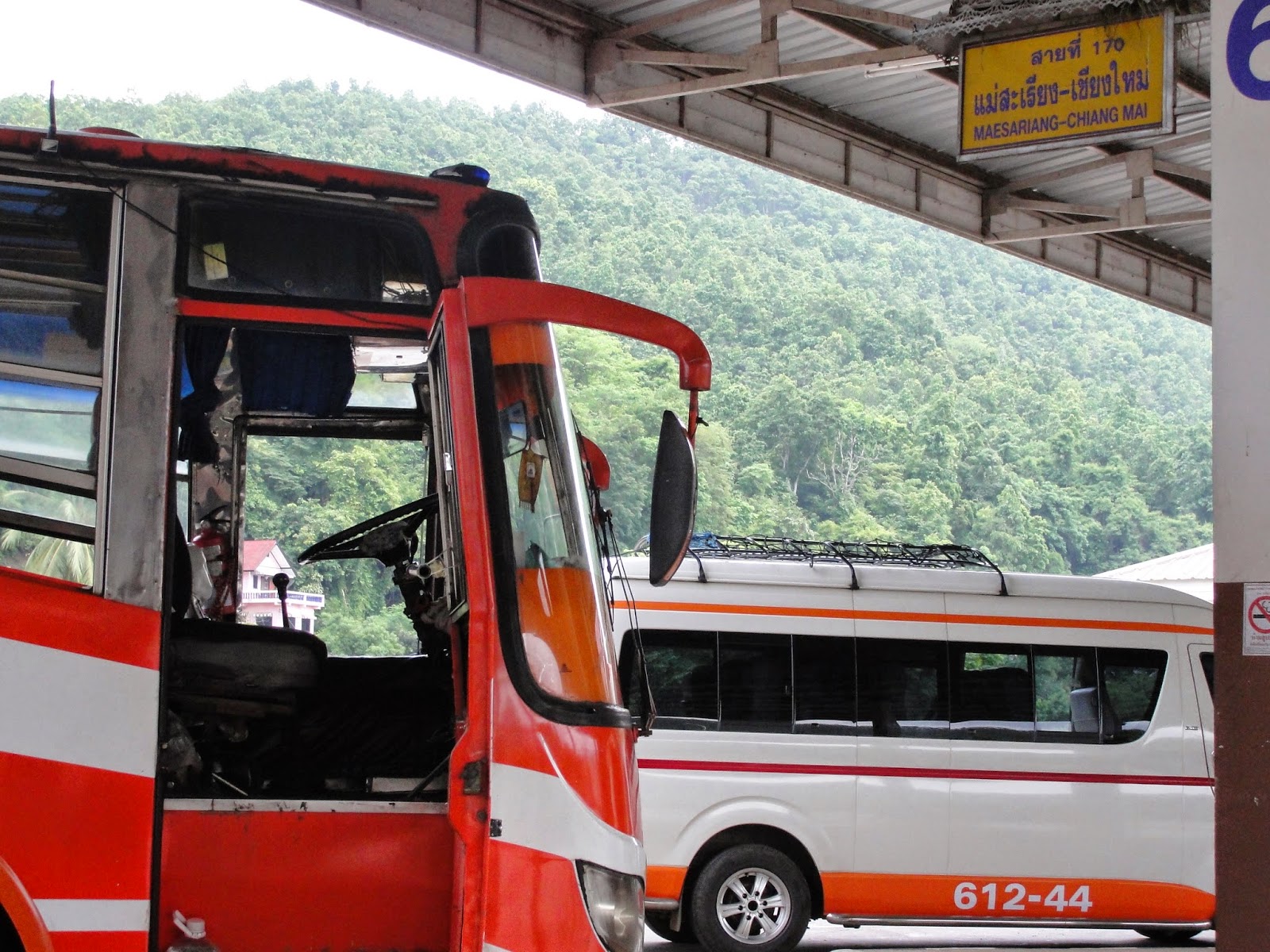 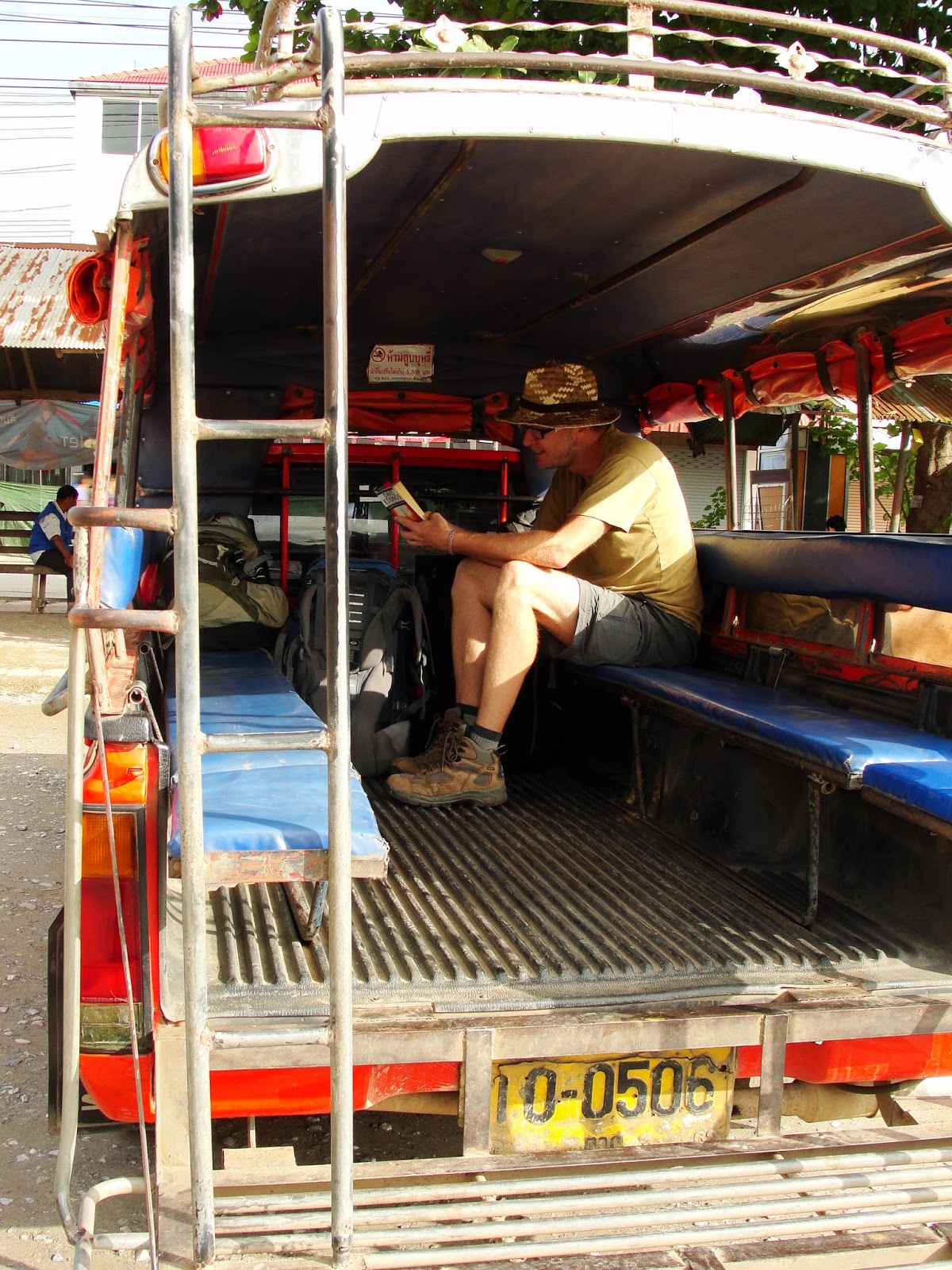 even the 5-hour songtheaw to Mae Sot was perfectly fine

The comfortable feel. The street art, the abstract sculptures, the modern buildings, the 7-11s, the cars and traffic signals, the widespread availability of peanut butter... Everything felt familiar.

In addition to comfortable "stuff", Thailand is used to westerners. In both big cities and small towns we were generally ignored so we never felt like tourists. Communication was easy no matter where we were. I even - GASP! - stopped wearing my money belt in Thailand. This comfortable feeling contributed greatly to our lull and it's really easy to see why so many westerners flock to Thailand over other less "comfortable" SE Asian countries.

Which brings us to five things we didn't really like about Thailand. Like I said, we (mostly) enjoyed our two months but it definitely wasn't our favorite country. Here are a few things we won't miss...

The farangs. So many westerners flock to Thailand! And on parts of the route we traveled it seemed like so many did so looking for cheap drugs, cheap sex, cheap beer - cheap everything. At one point (I think it was around Pai) I said I wanted to go somewhere where young white guys weren't looking to score opium and Patrick replied, "so we're leaving Thailand, then?" And let's not forget everyone's favorite taboo subject, the creepy old white men... Main drags in places like Chiang Rai, Chiang Mai, Pai, Kanchanaburi, Koh Tao, and Bangkok were definitely the worst in all of these regards. 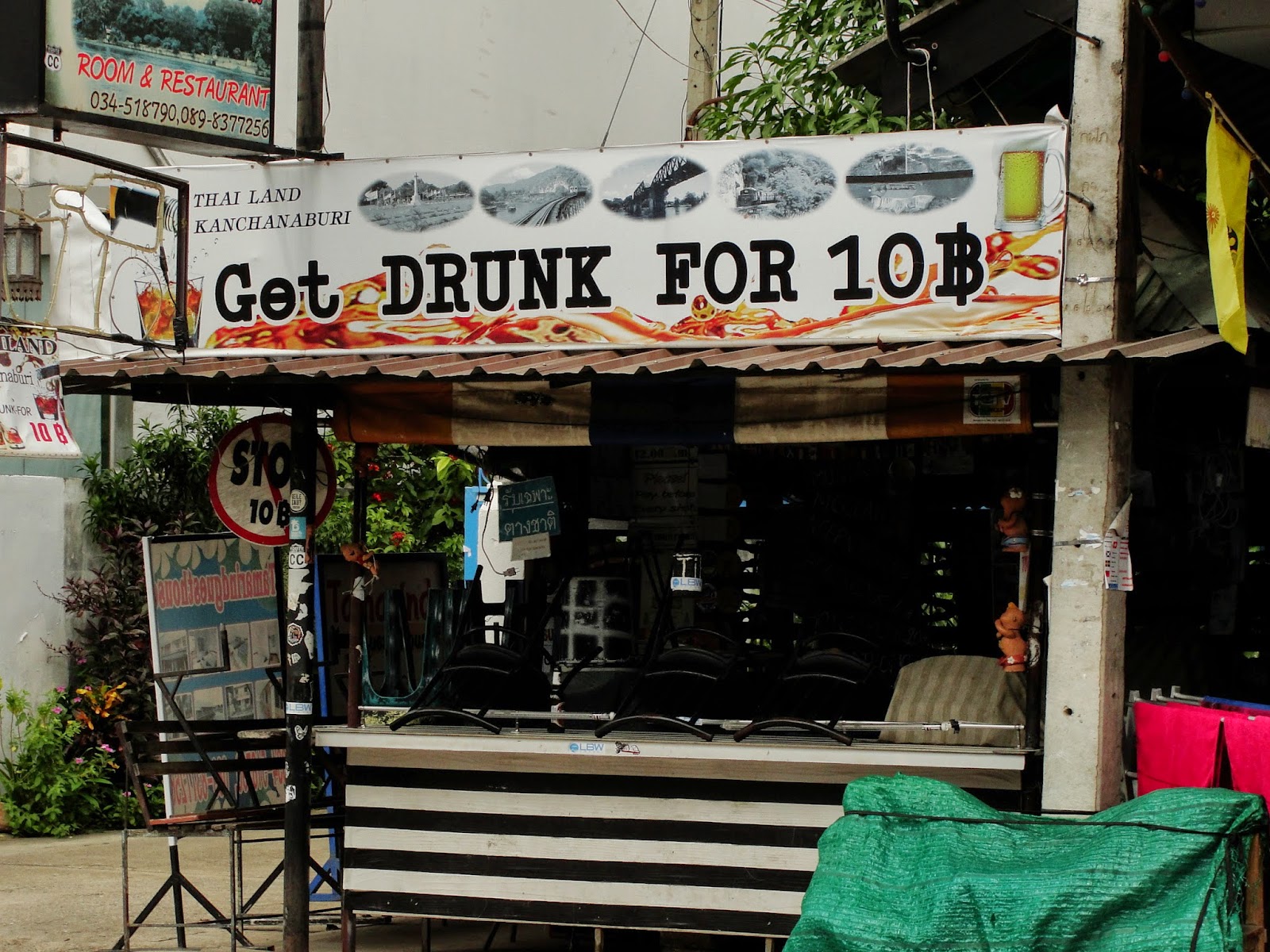 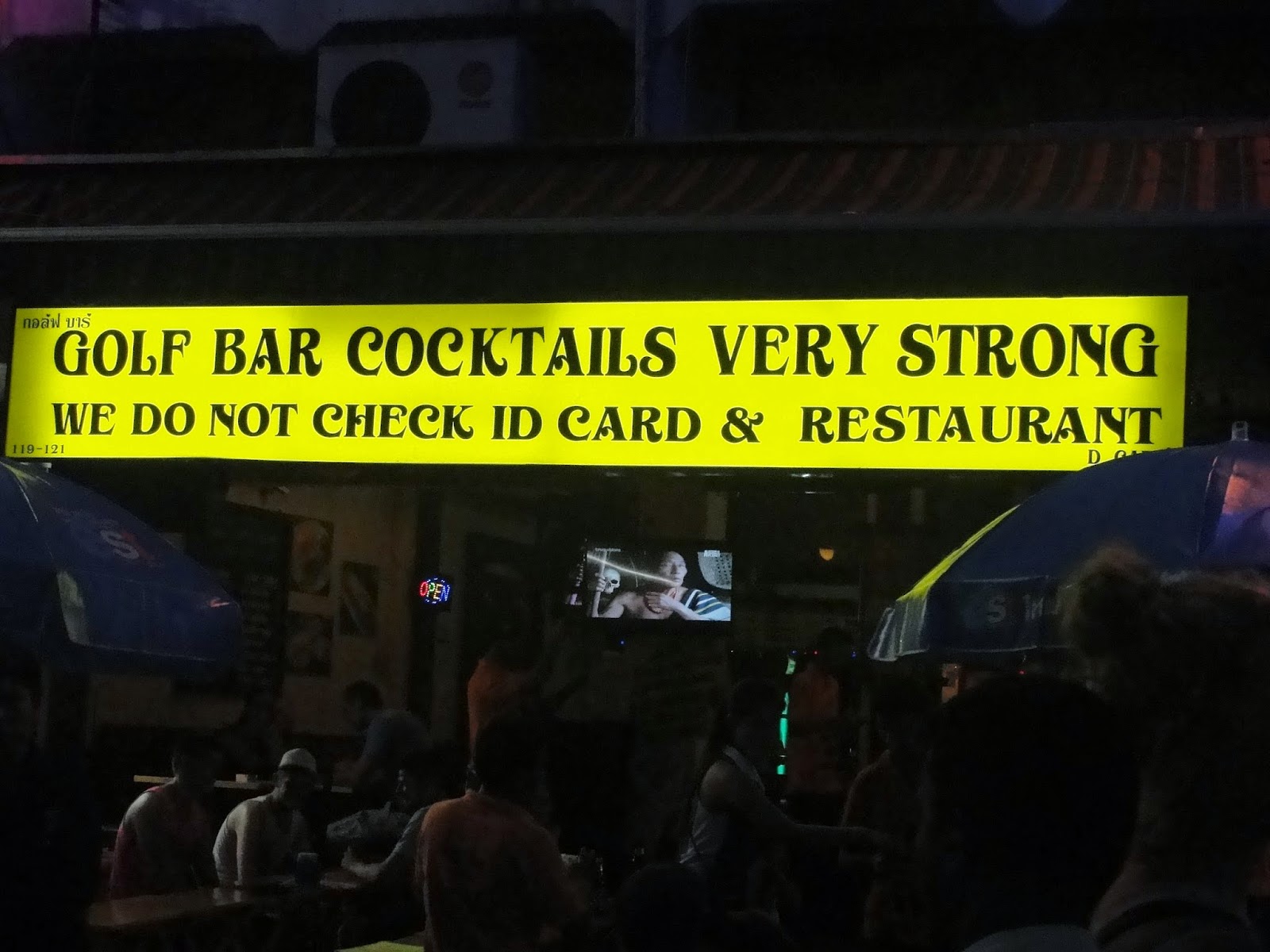 exhibit B, Bangkok
(good thing, too,
because Patrick's license has expired!) 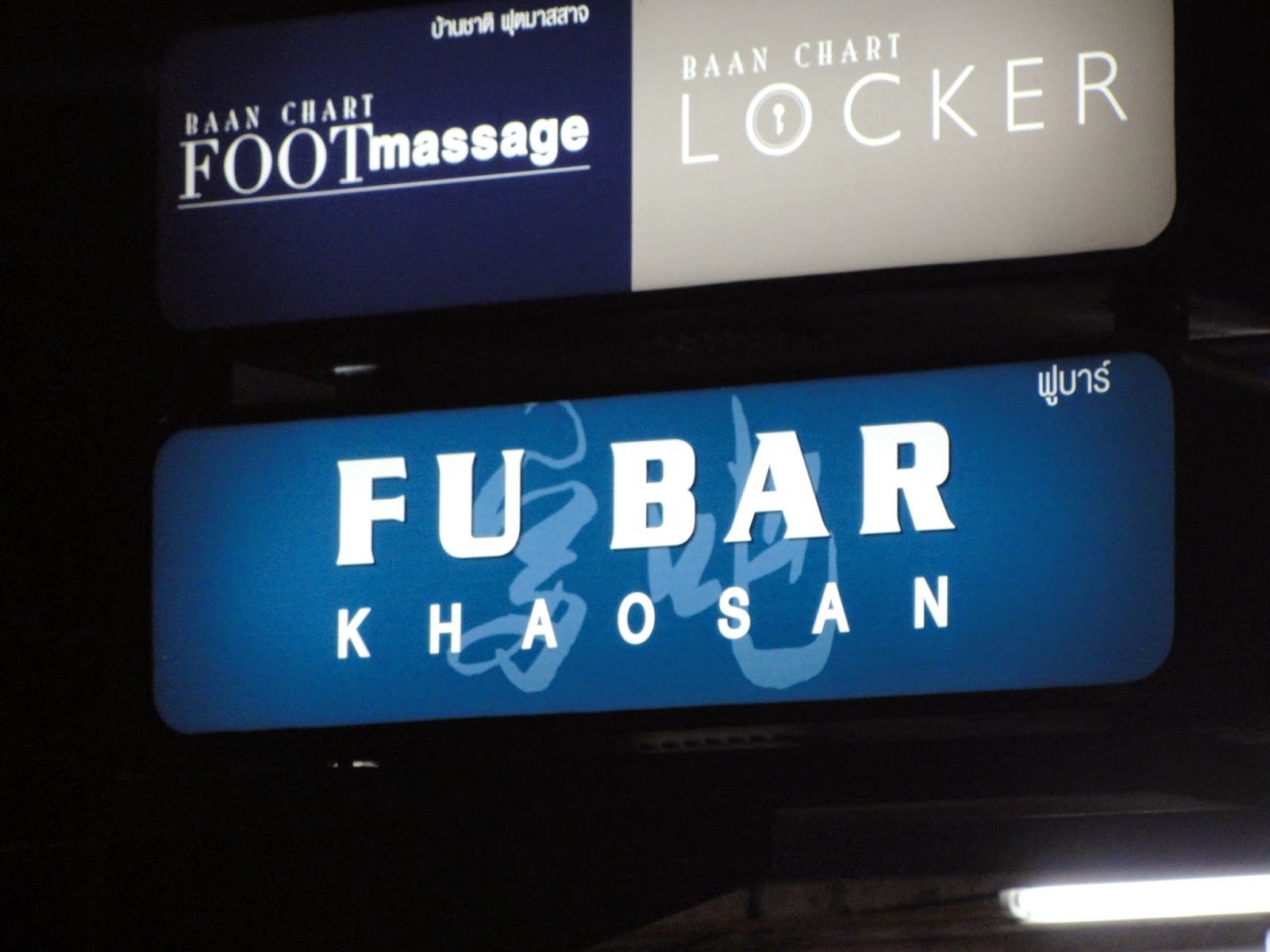 exhibit C, Bangkok
(I don't care how you translate it,
it's just wrong)

Once we got off the main drags and farther west into less-traveled territory, things quieted down significantly.  We tried to do that as much as possible.

We also saw and heard of many farangs settling down in Thailand to take advantage of the favorable cost of living. It's hard to imagine people moving to a new place and not learning the local language, not engaging with the local community, and constantly bad-mouthing their new home - but it happens.  We don't get that.

The pad thai. It was all so bland. 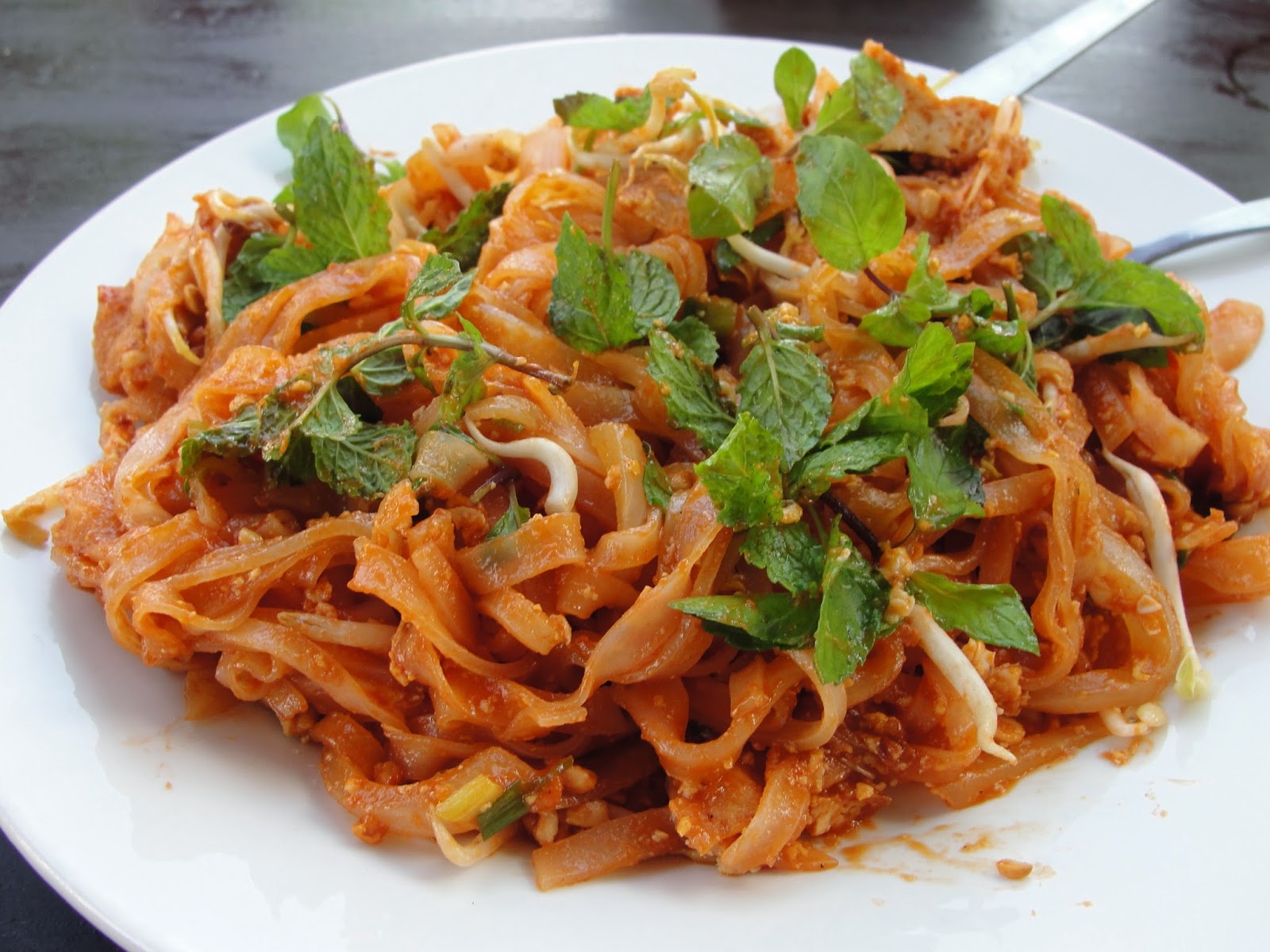 the best pad thai we ate was in Lao 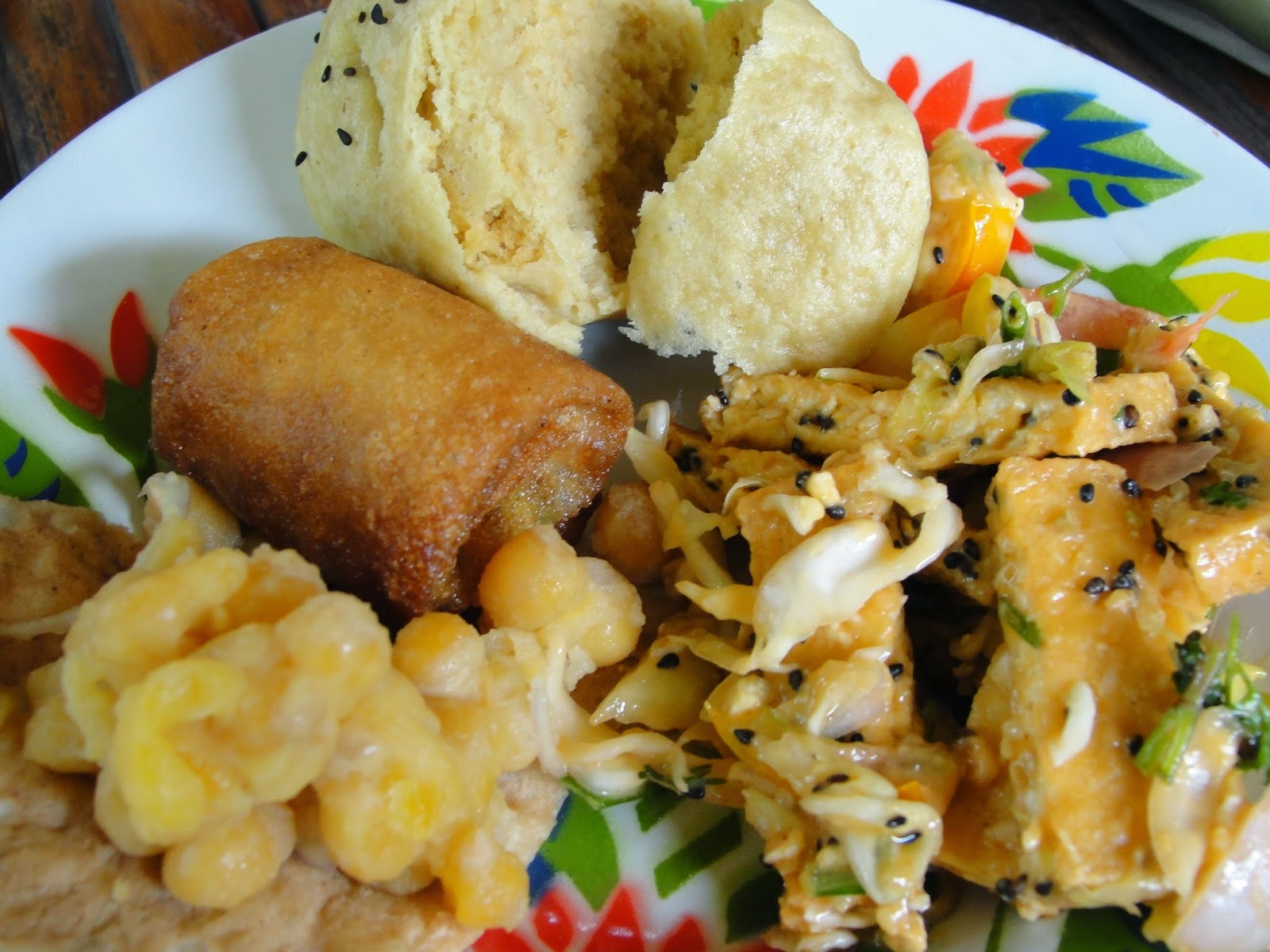 the best Thai food we ate was Burmese food

The dogs. Stray dogs everywhere. The majority didn't bother us, but they were often covered in scabs and/or mange and/or had clearly just had several puppies. It was sad. We did get rushed by a few dogs too, luckily with no bad outcome. I'd read one too many blog posts about someone getting bit in Thailand and we weren't really interested in testing our health insurance on rabies shots at the local hospital.

The national parks. Granted, we didn't visit many, but the ones we did visit had very few hiking trails and seemed to be more about land preservation. We're all for that, but we wanted to hike! 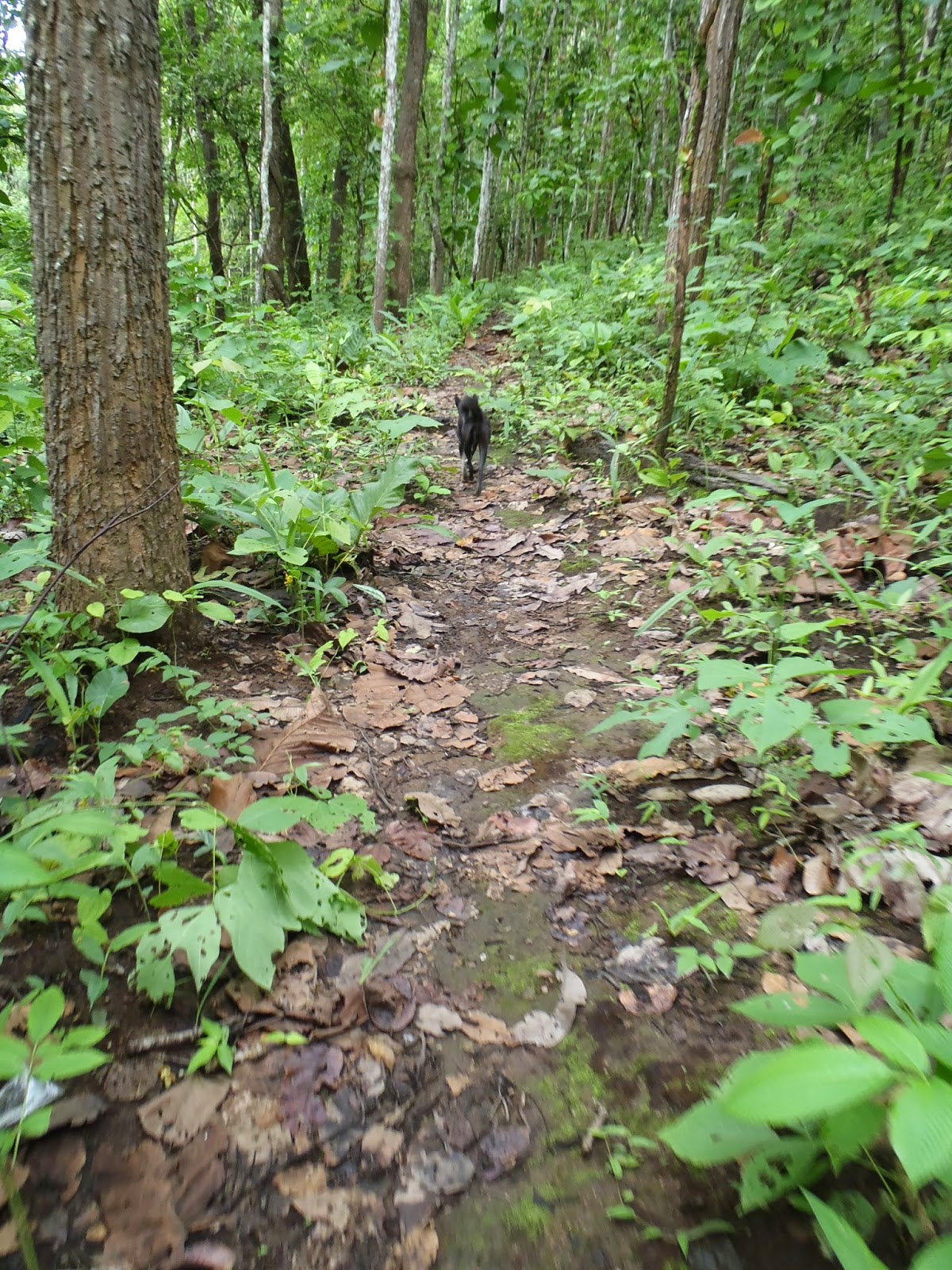 the trail guide dog was the only wildlife we saw
on the only trail we hiked - and it was only a 2km trail
(Salawin National Park, Mae Sariang)

The "anywhere" feeling. Yes, we liked the comfortable feel but on the other hand, everywhere could have been anywhere.  Big cities felt familiar, small towns were easily maneuvered.  Koh Tao felt like any Florida beach during spring break (or so we've heard). I remember motorbiking through windy hills in Mae Hong Son and suddenly feeling like I was in rural Maryland. 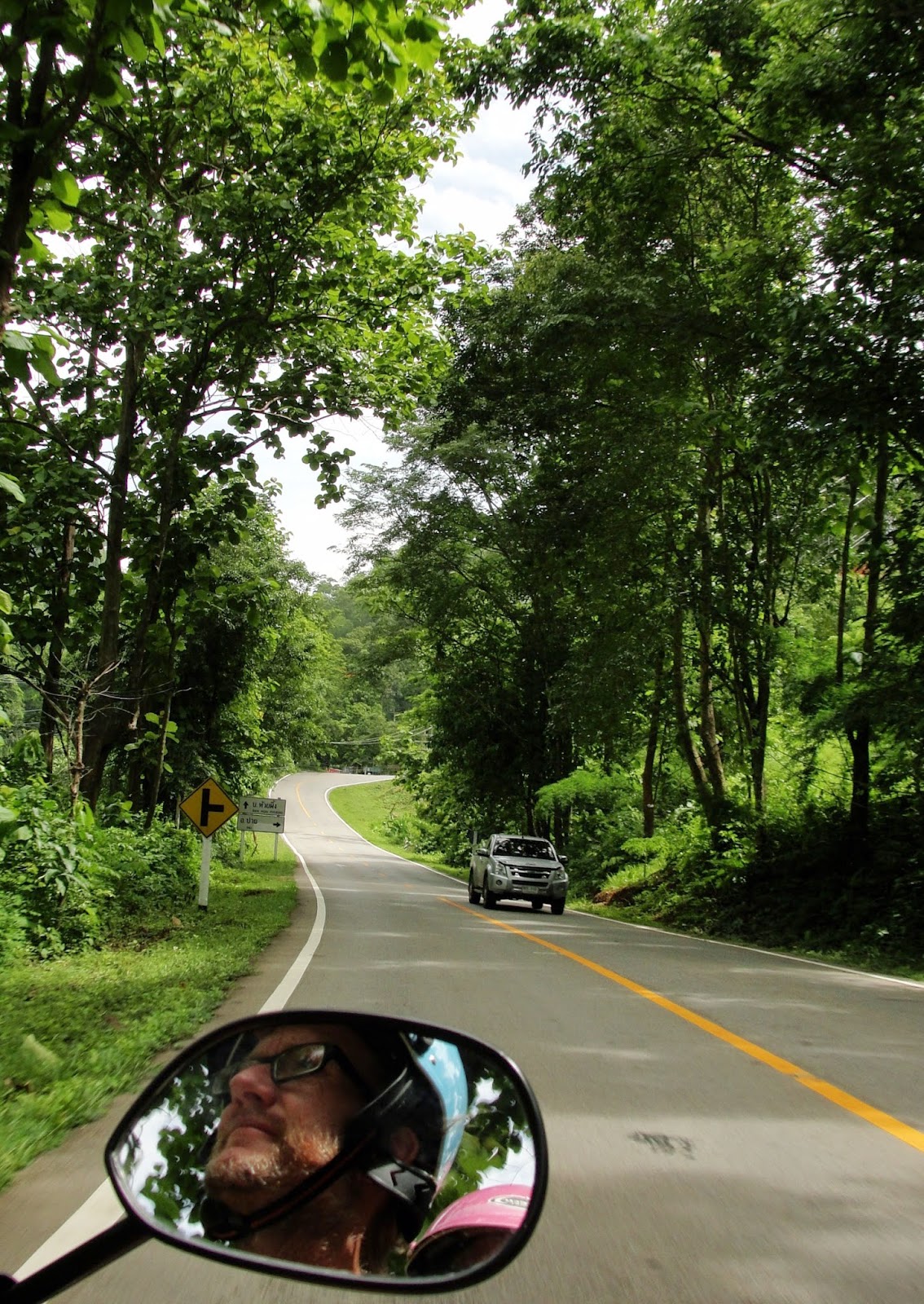 aside from the whole
"drive on the left" thing of course

Mae Sot was the only town where we felt out of place, and it was a good feeling.

Now we're in Siem Reap, Cambodia with a different kind of out-of-place feeling. We'd like to say it's a good feeling but so far it's been a bit like Marrakesh in that everyone wants to sell you something, only here the people are much nicer about it and you know they actually need your money. Once we get out of here I'm sure we'll love the country as much as everyone else does...
Posted by Jen
Email ThisBlogThis!Share to TwitterShare to FacebookShare to Pinterest
Labels: asia, cambodia, thailand