Our marathon bicycle tour of the Temples of Angkor.

Remember when we rented bicycles and visited more than 50 ancient ruins of wats at three historic Thai sites? Well, the Temples of Angkor were a bit different.

And by different, we mean HUGE.

Most people pick a handful of temples they want to visit and then hire a tuk-tuk driver to take them around. Some people hire a guide and enjoy an air conditioned ride around the sites. We opted to repeat the bicycle method so that we could take our time and alter our course as desired. But even after biking at least 60km over two days, we still only managed to see 14 temples within the two main loops.

People, the place is HUGE. 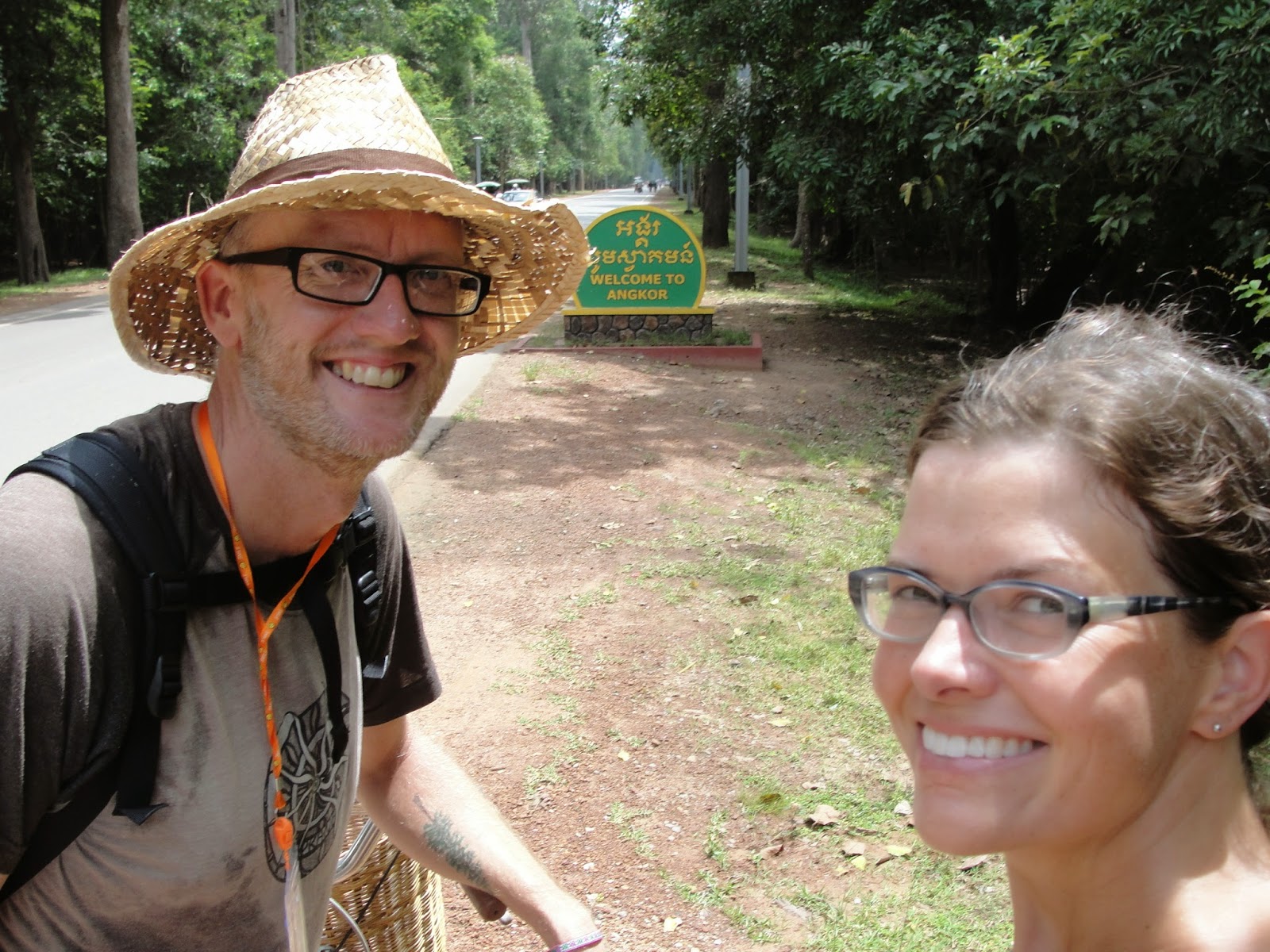 start of day one - ready!

It's so huge that we spent five hours there our first day and only saw four temples.

It's so huge that we started super-early the next day and still only saw ten temples in about as many hours... and honestly, one of those was a bit of a drive-by. 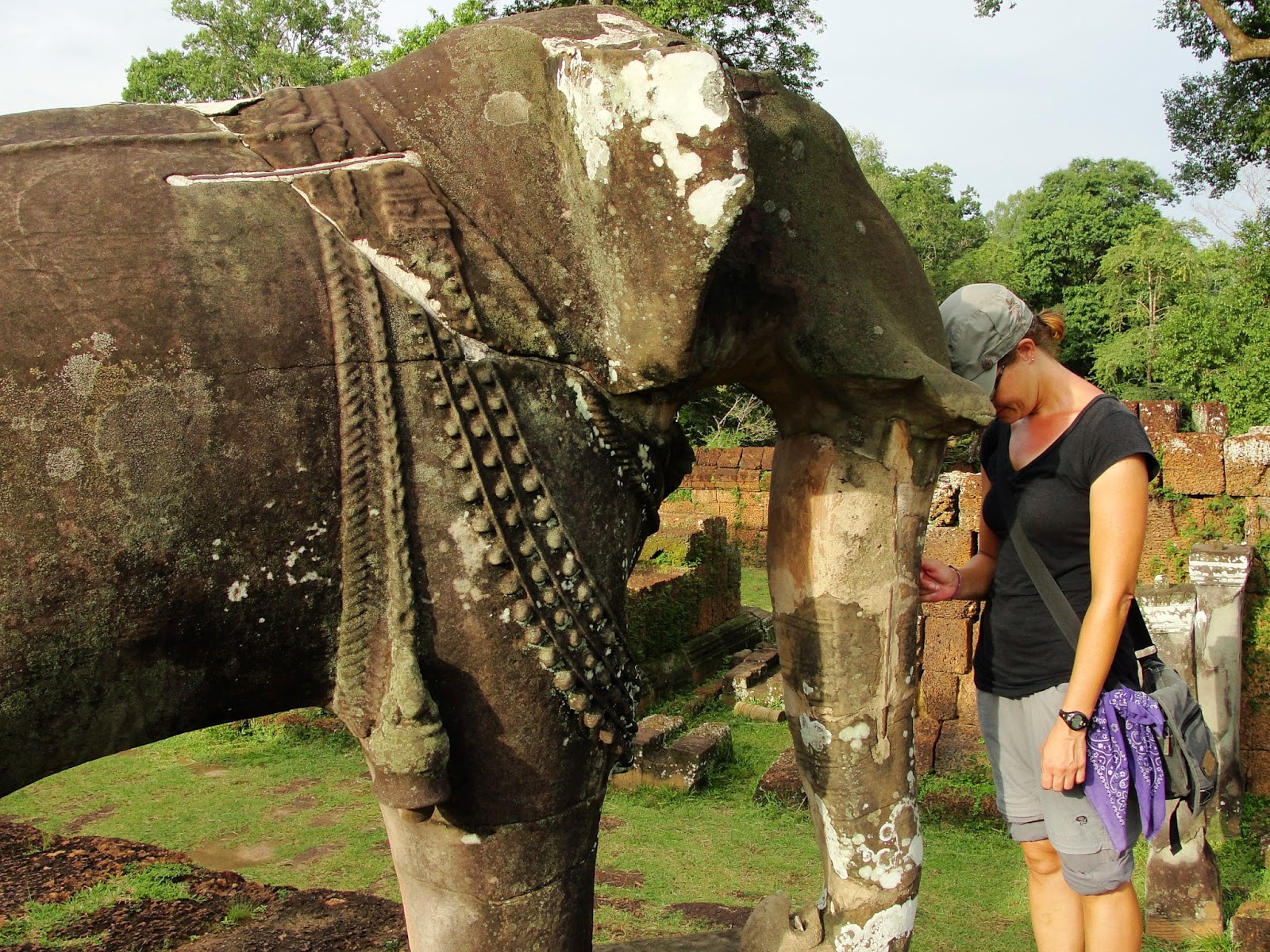 And the temples themselves? HUGE. So huge that we eventually had to put time limits on how long we could spend wandering around each ginormous temple site so that we didn't let time get away from us. So huge that it was almost impossible to appreciate the minute detail that went into every single temple, because we were too busy being overwhelmed by the hugeness of them all.

Okay, now that we've got that out of the way... The Temples of Angkor include more than 100 Angkorian monuments spread over 3000 square kilometers outside of Siem Reap. (See? Huge.) Buddhism and Hinduism meet - and sometimes clash - in this stunning complex of temples and walled cities built over 1000 years ago. The city of Angkor was abandoned in the 15th century after successive invasions from Siam; the Khmer folks knew about it but it only became a future tourist attraction when it was discovered by a French missionary back in the 19th century. (Sounds familiar!) Much more information on the history of Angkor can be found here.

The temples we saw can be found here: 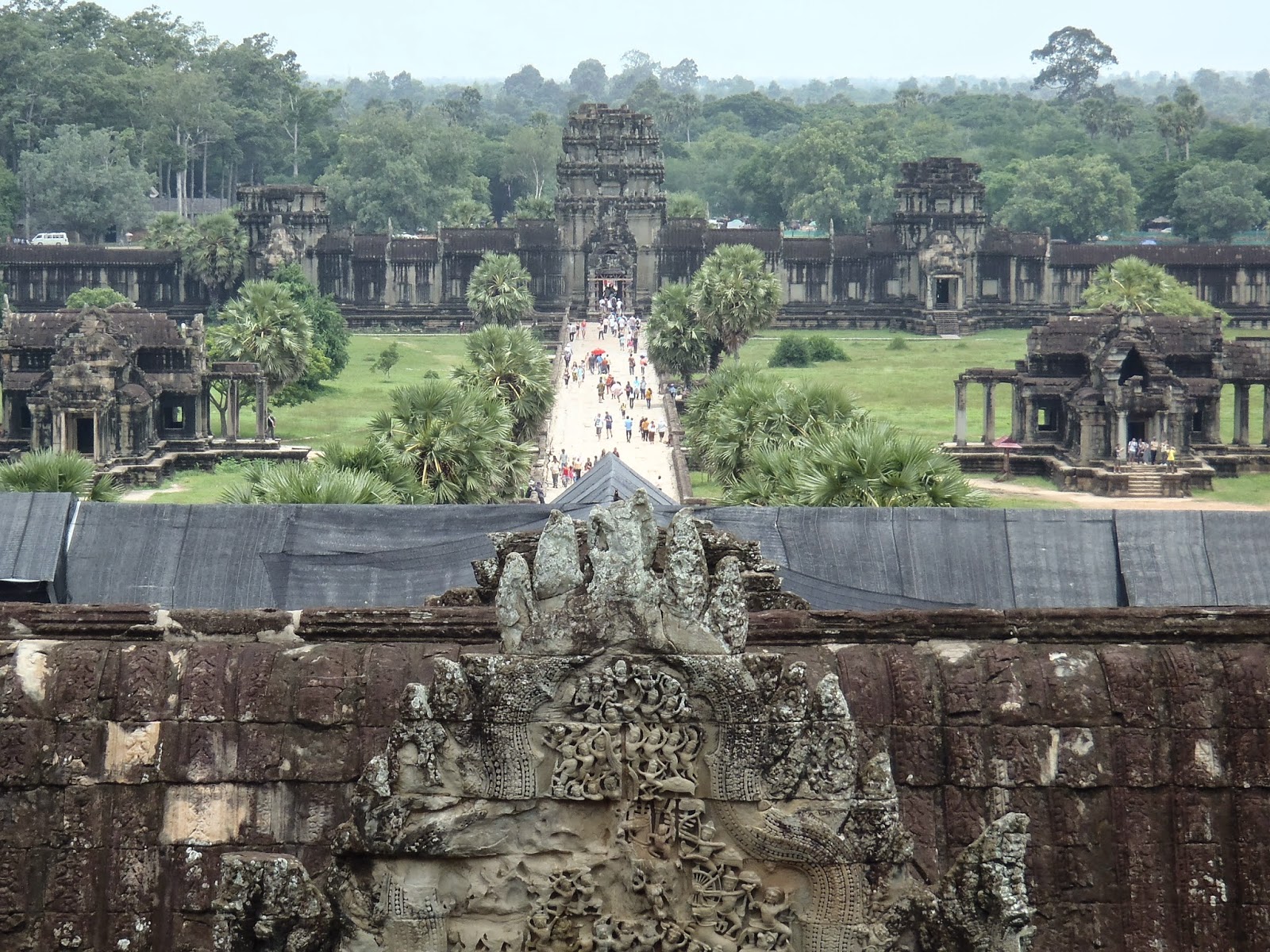 Angkor Wat from the back 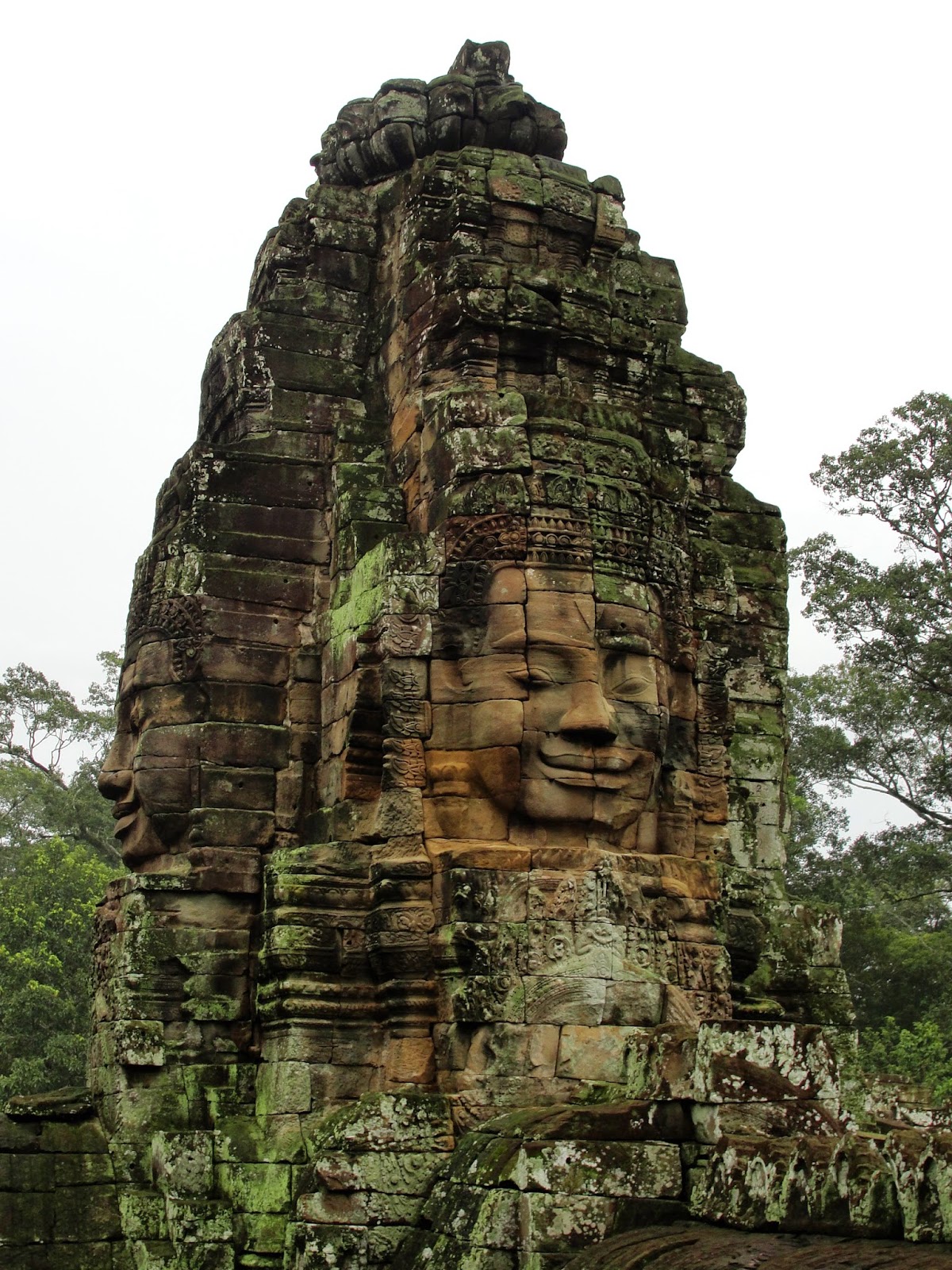 Bayon -
faces on each side of 54 towers 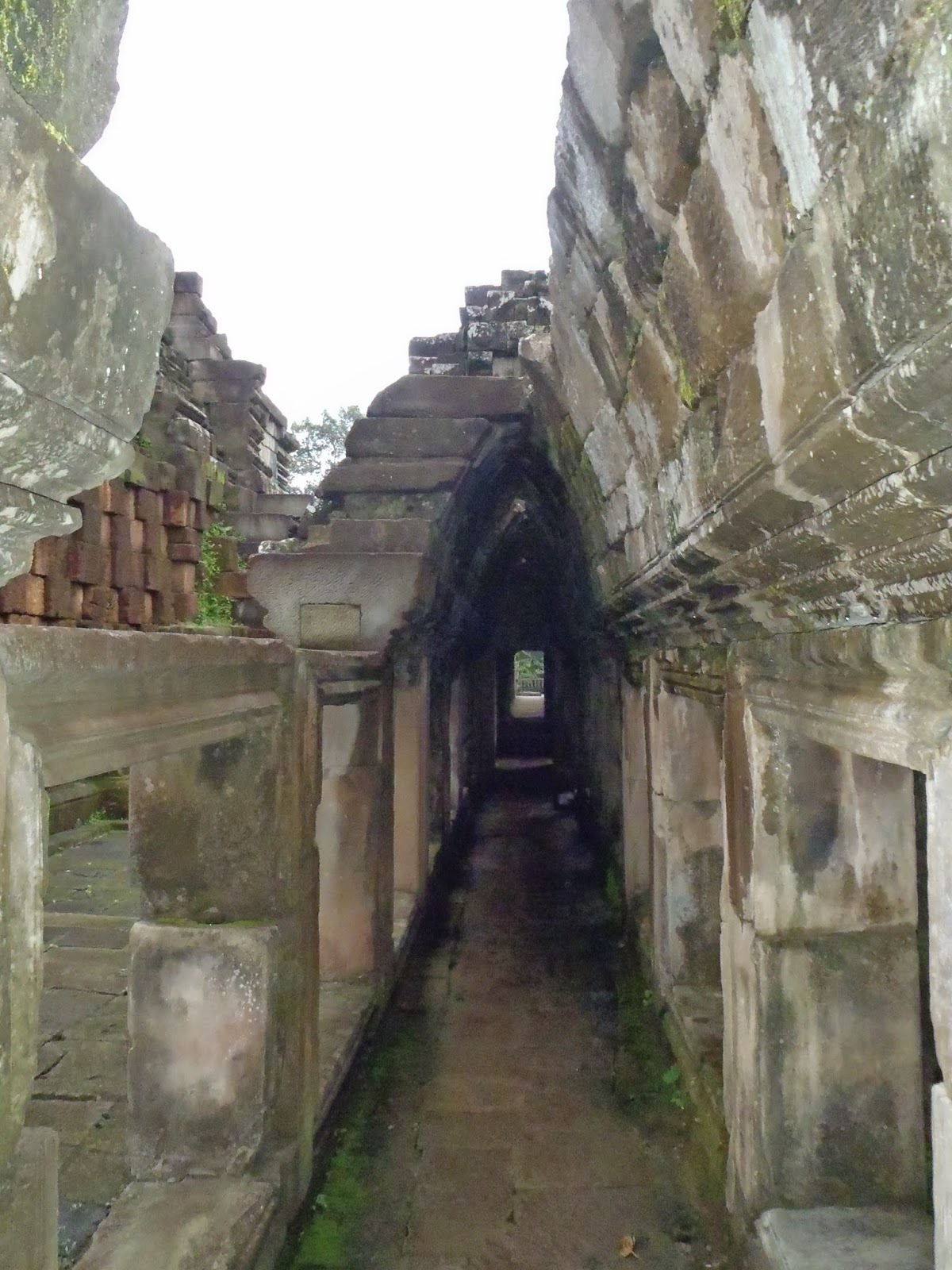 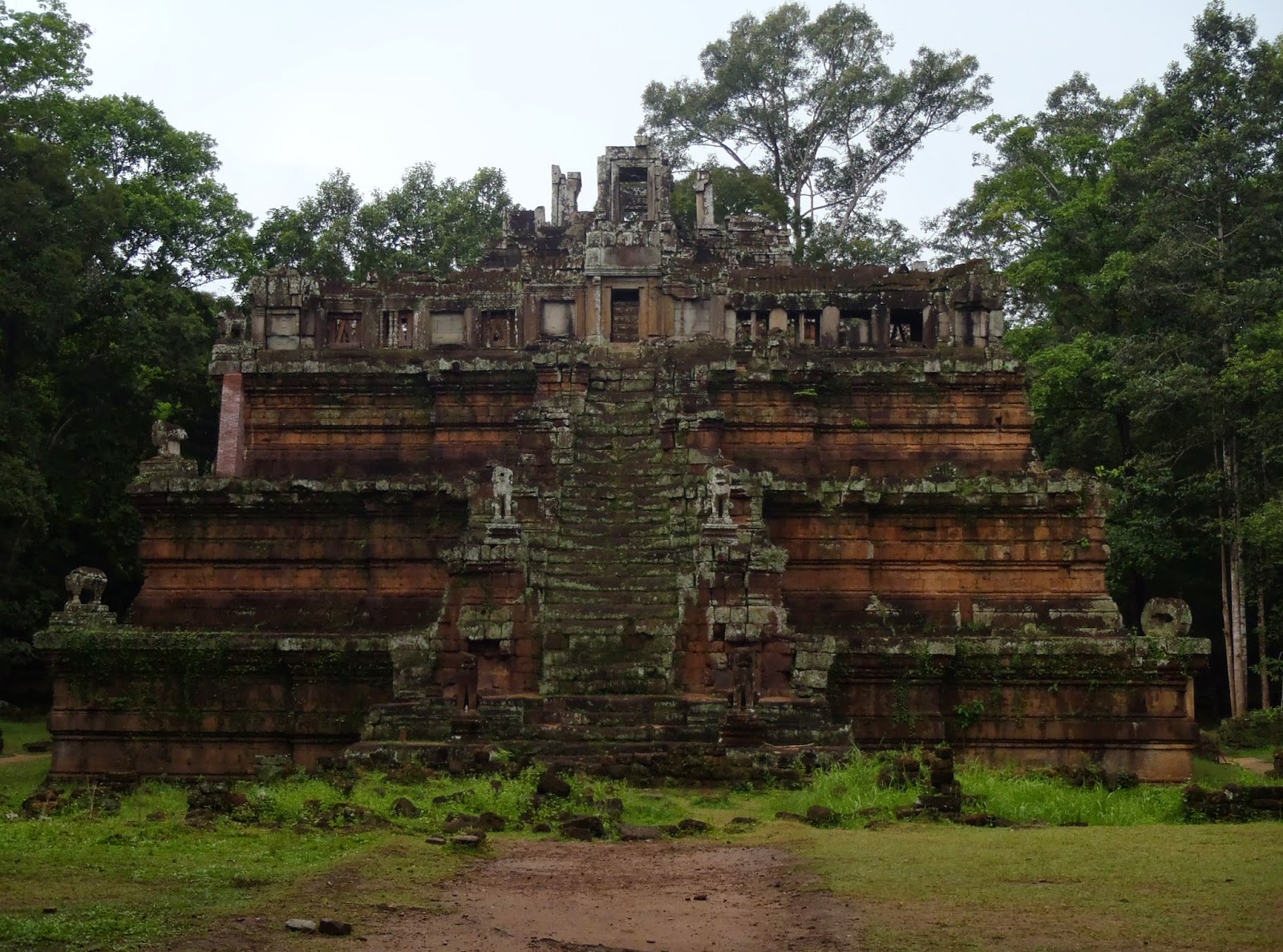 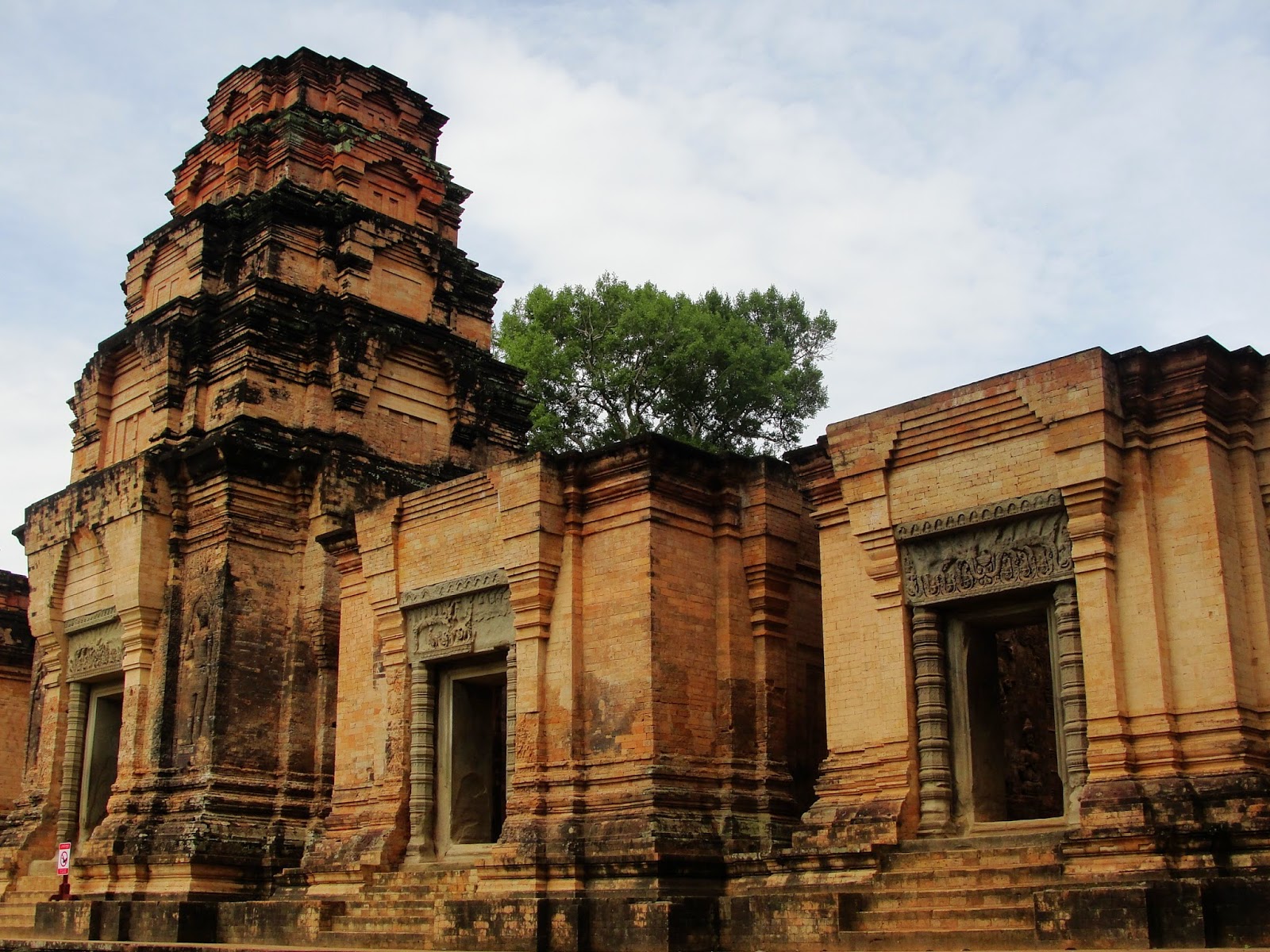 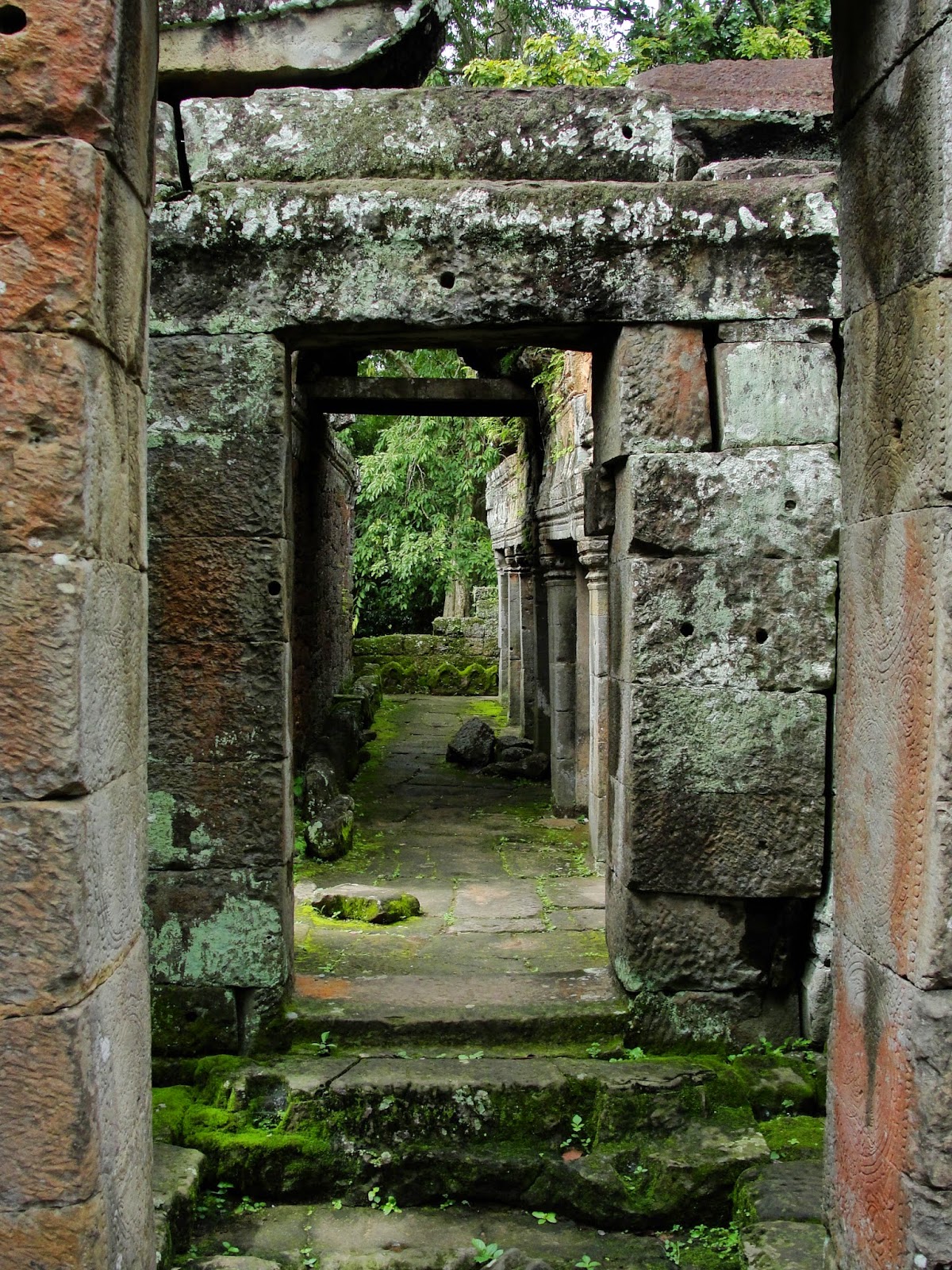 the wild trees of Ta Phrom 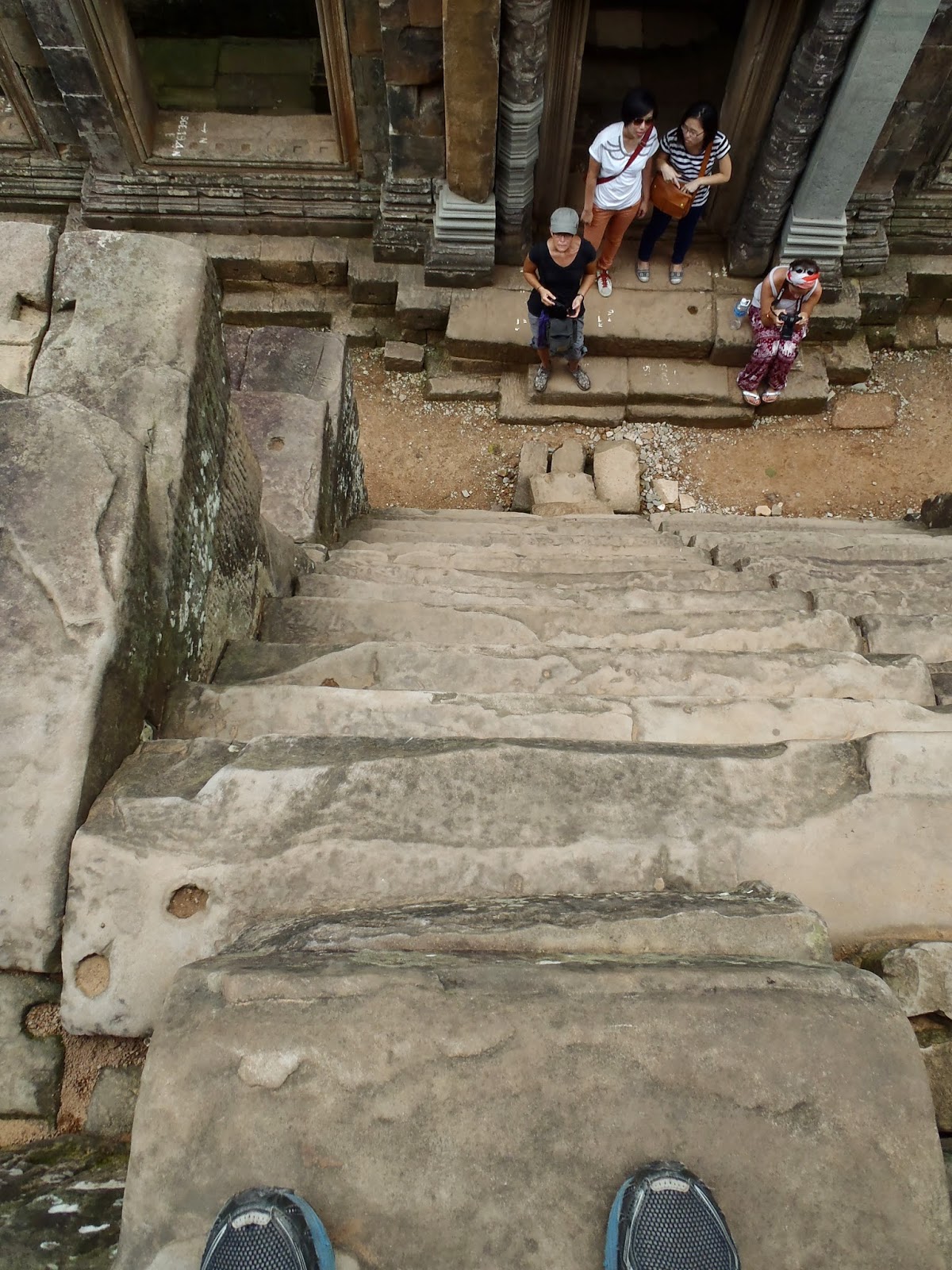 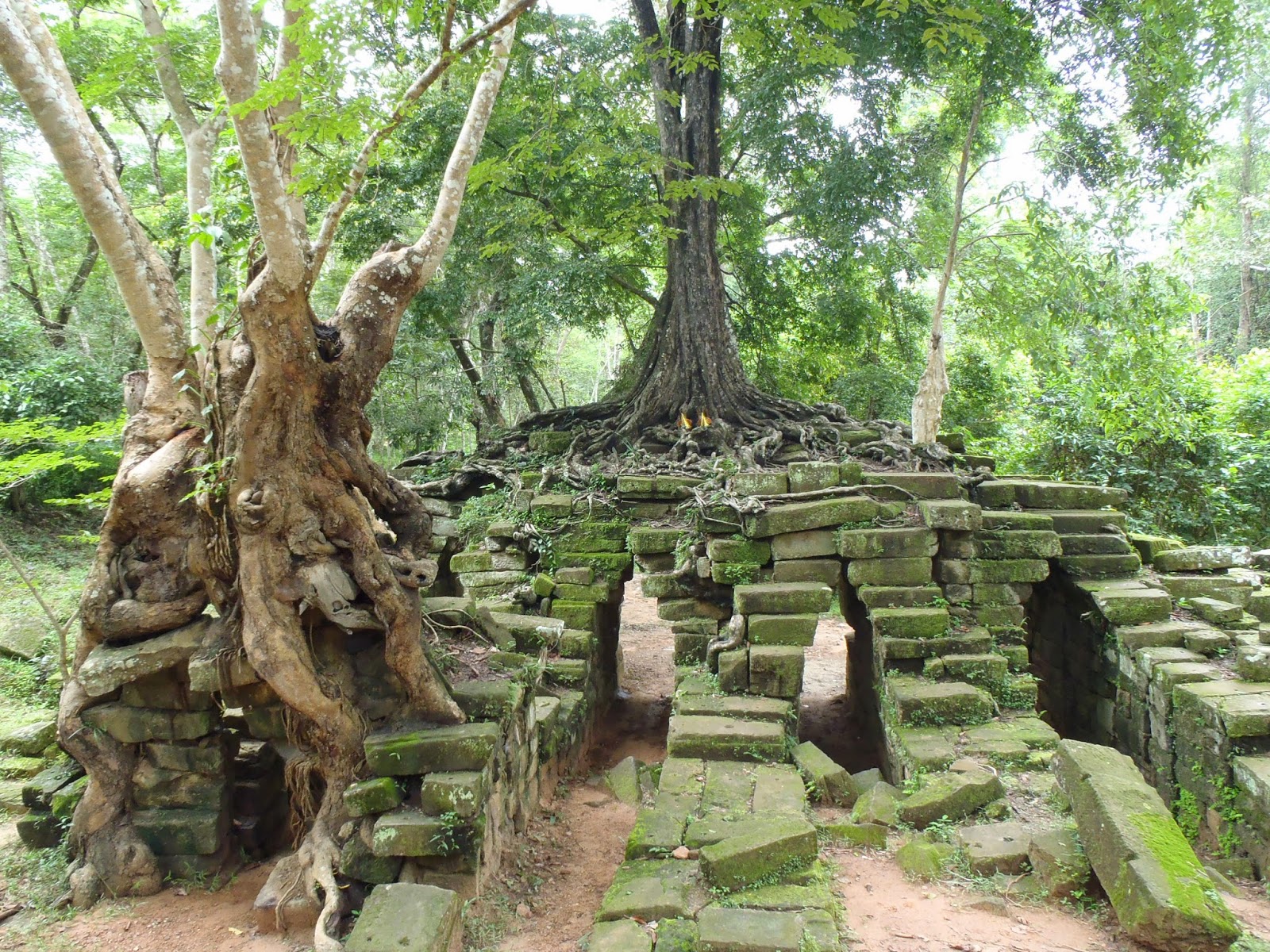 Thommamom
(we think - we were tired) 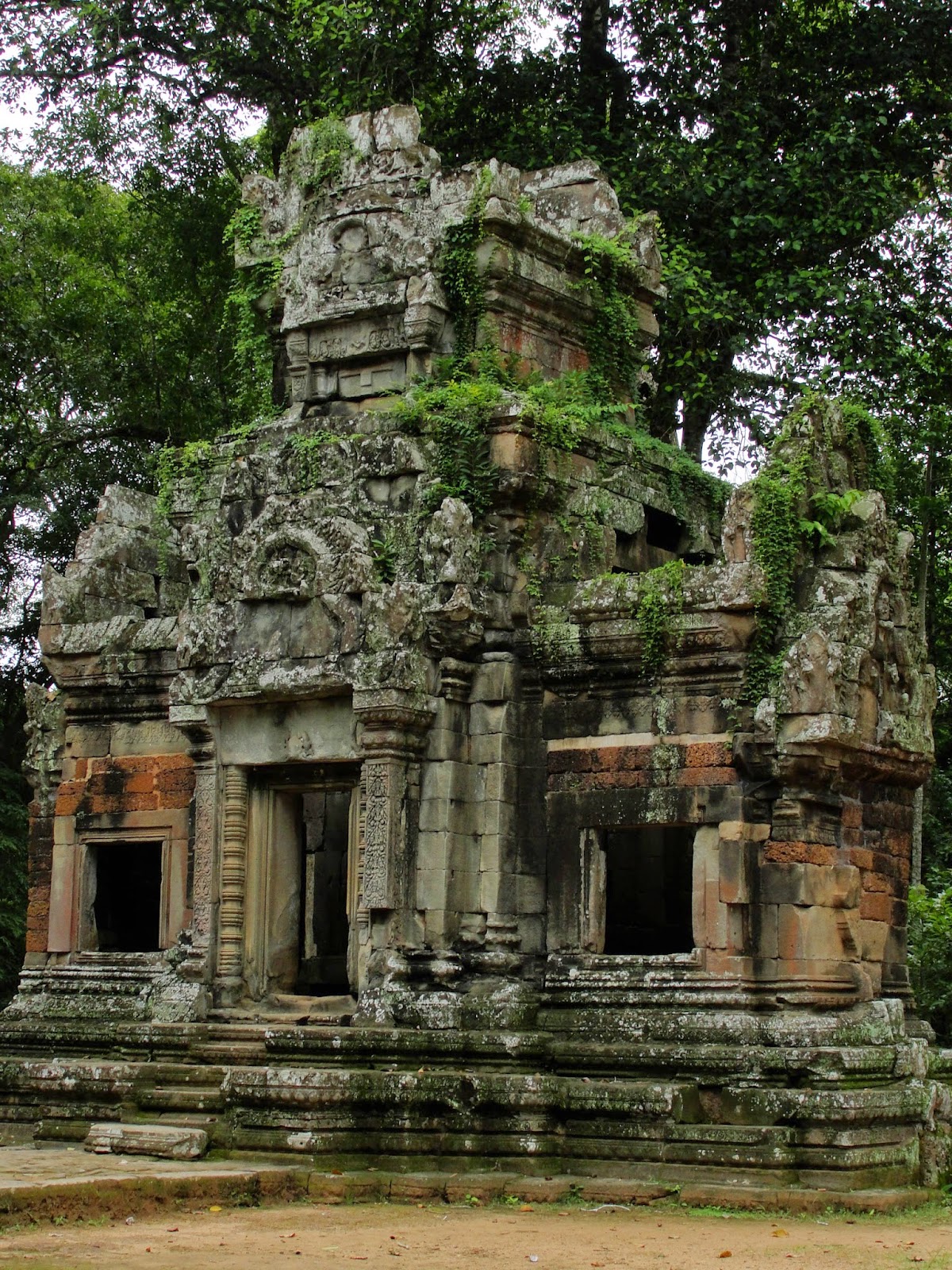 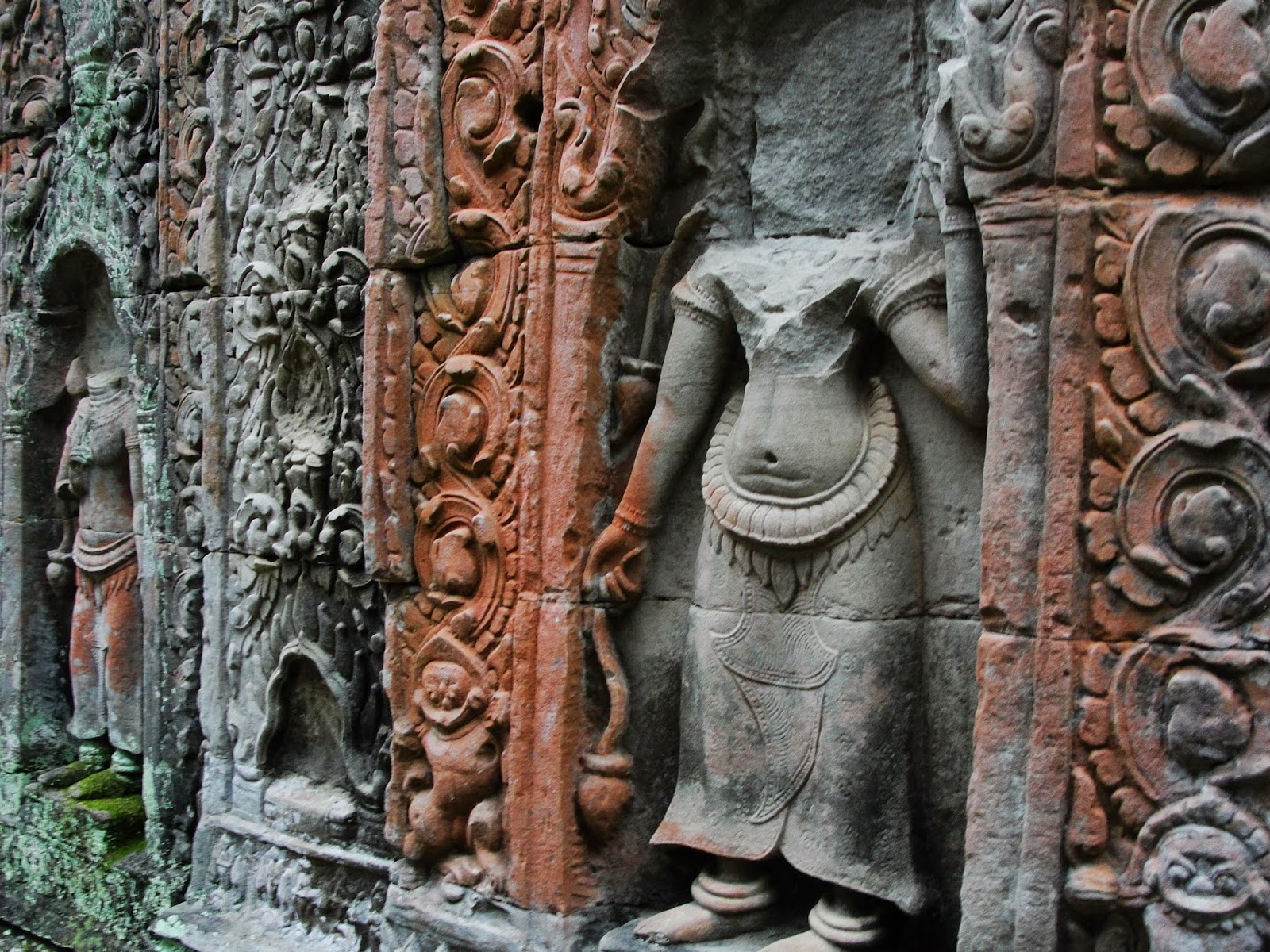 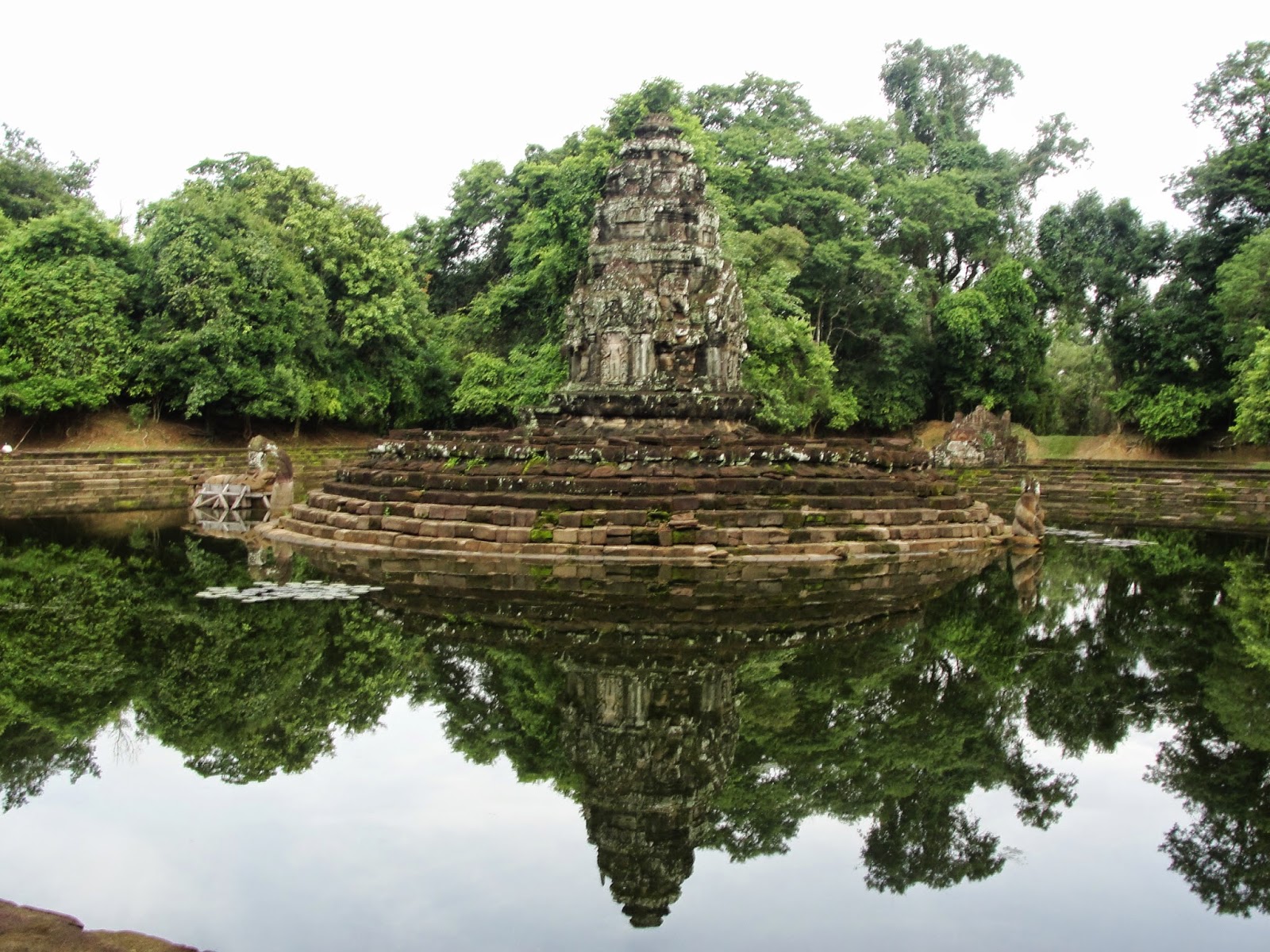 the island temple of Neak Pean 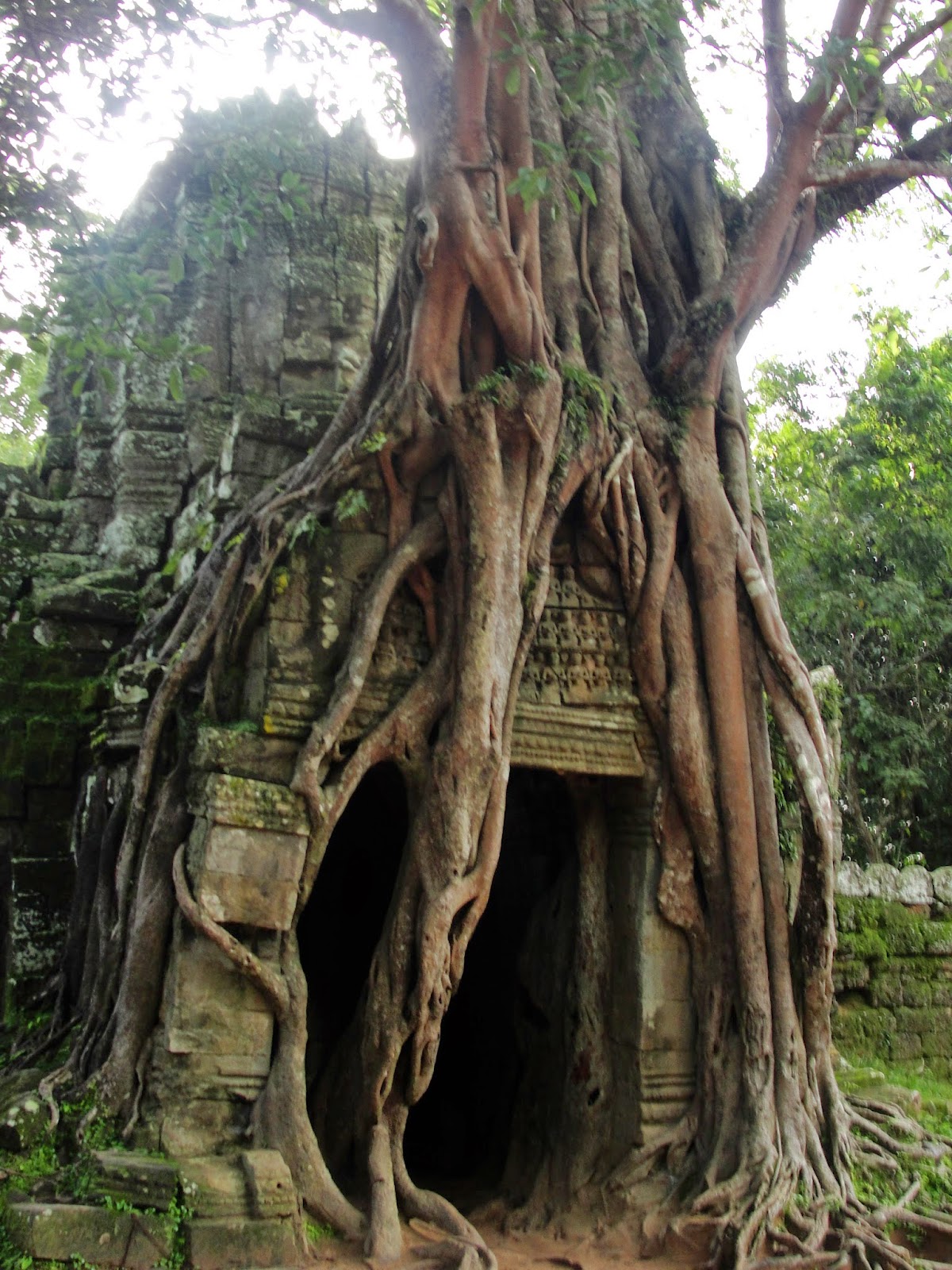 a tree takeover at Ta Som 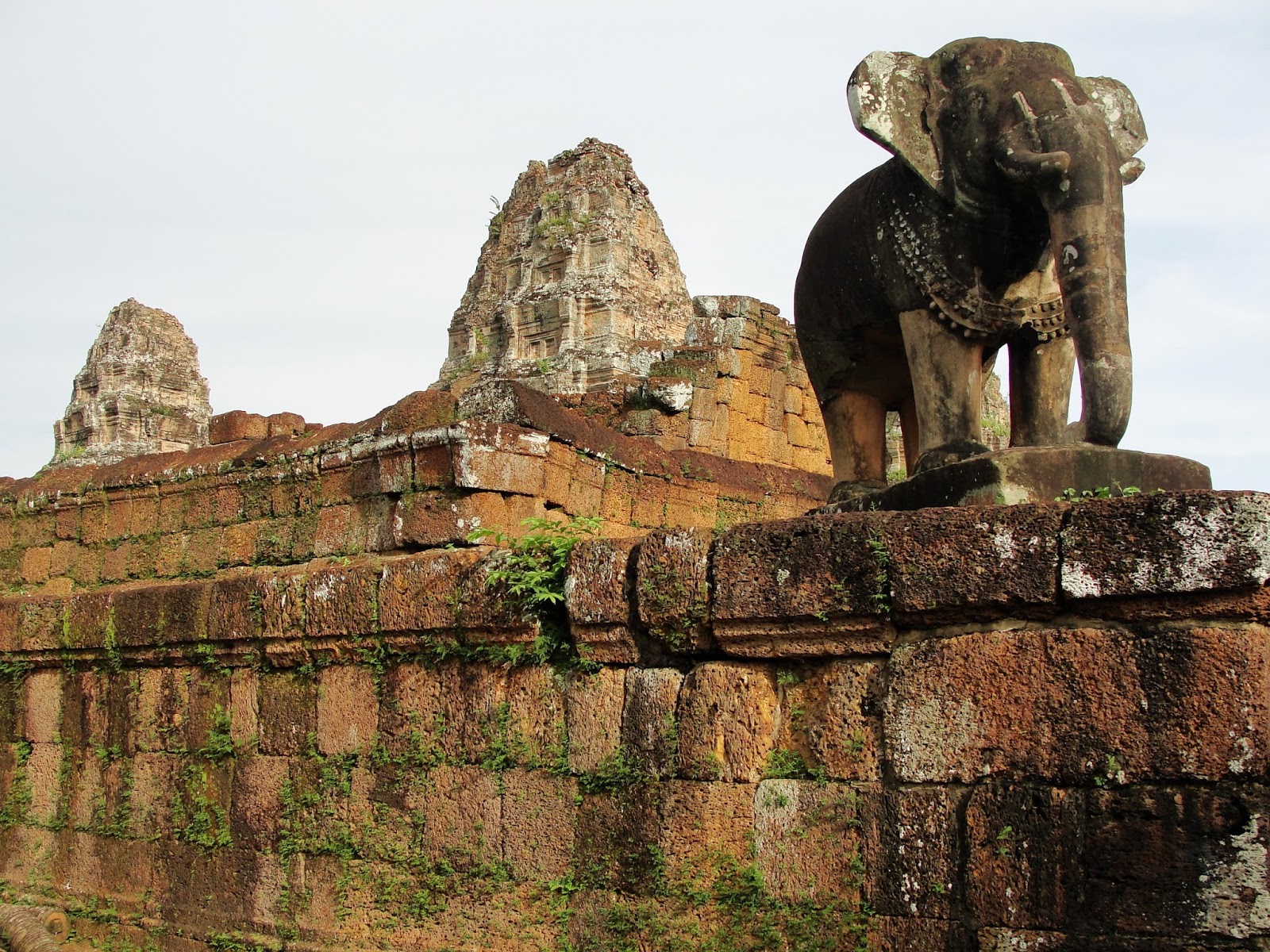 And lots (and lots and lots) more pictures start here.

A lot of the temples we saw have been restored or are currently under restoration. This didn't detract from the experience. What did detract was the lack of signage at each temple. For such a popular tourist mecca, the Temples of Angkor had very little explanation. We didn't get a map with our entry fee; fortunately our Rough Guide had a pretty good one but many temples didn't even have a sign with the name of the temple, let alone any information about the temple itself. You pretty much have to hire a guide (or purchase a guidebook - "only $1, mister, madame!") to know what you're looking at...

Unless you're us, of course. We probably didn't get as much out of our visit as some people, but we definitely learned enough at My Son and the Thai ruins (and later in Kampong Cham) to enjoy our Angkor visit. Surely some of the guides are really good, but after overhearing many of the guides' canned speeches (and later being rushed through sites in Kampong Cham by our informal tour guide) we're still glad we didn't go that route.

Also a bit detracting was the constant noise. The larger sites were full of shopowners peddling their merchandise. 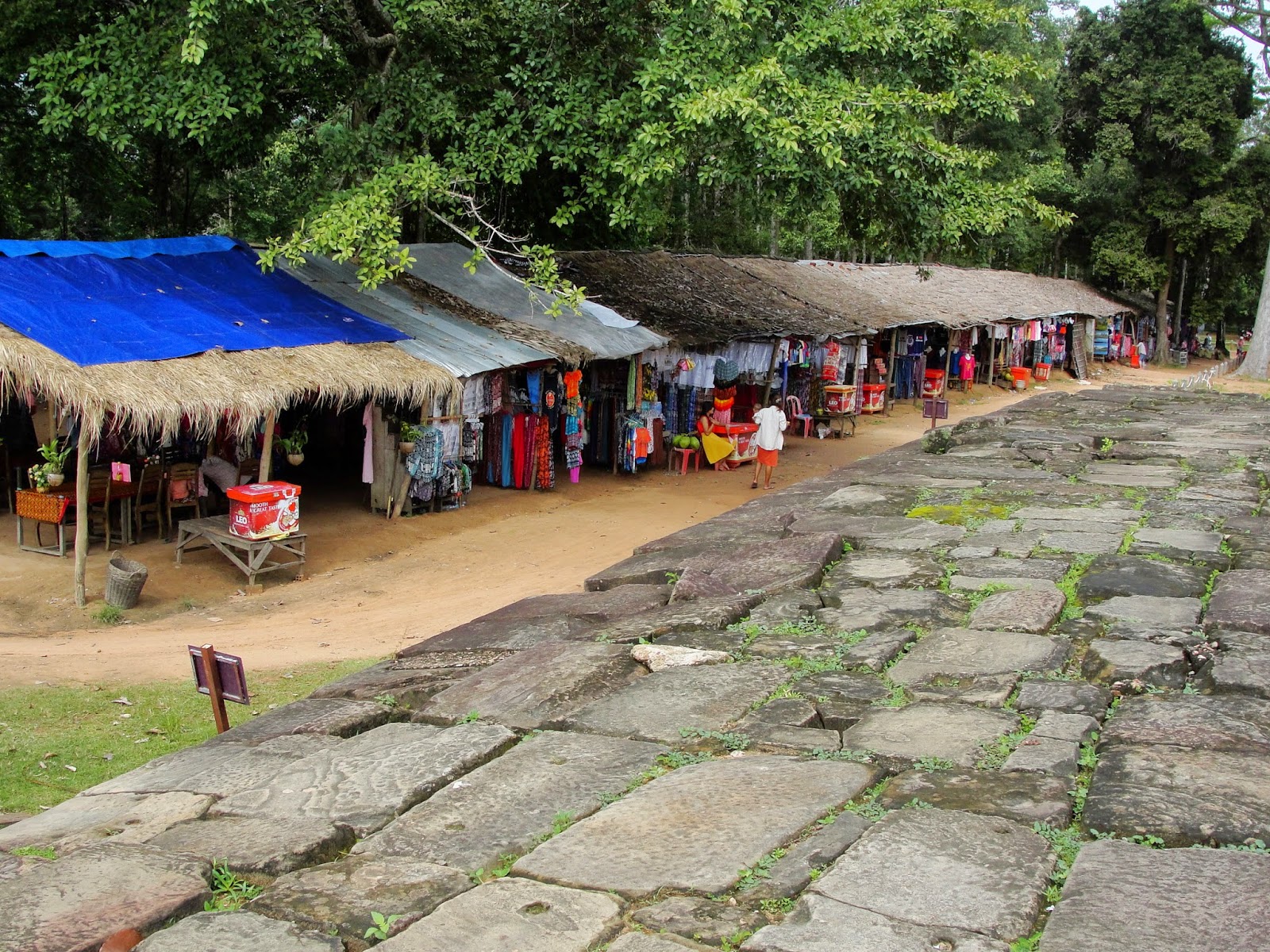 There's no shortage of beverages, food, t-shirts, elephant pants, musical instruments, postcards, magnets... Okay, fine, we get that this major tourist mecca is an excellent income-generator for the locals. But sometimes the peddling was just obnoxious, and unfortunately a lot of the peddlers were small children who should be in school instead of peddling trinkets to tourists.

But there were also groundskeepers, guides, and bored tuk-tuk drivers playing loud/bad pop or techno music at some of the sites. In those instances it was hard to appreciate the serene setting.

Anyway, we are glad we went but 14 temples over two days were enough for us. That said, we can see how one could spend an entire week there and still not see everything. In case you missed the memo, the place is HUGE.

Oh, and no, we didn't even try for a sunrise or sunset. Apparently both are lovely if you have a good camera, the right weather, and lots of patience for annoying crowds... Since we were batting zero for three we quit while we were ahead and just googled pictures. 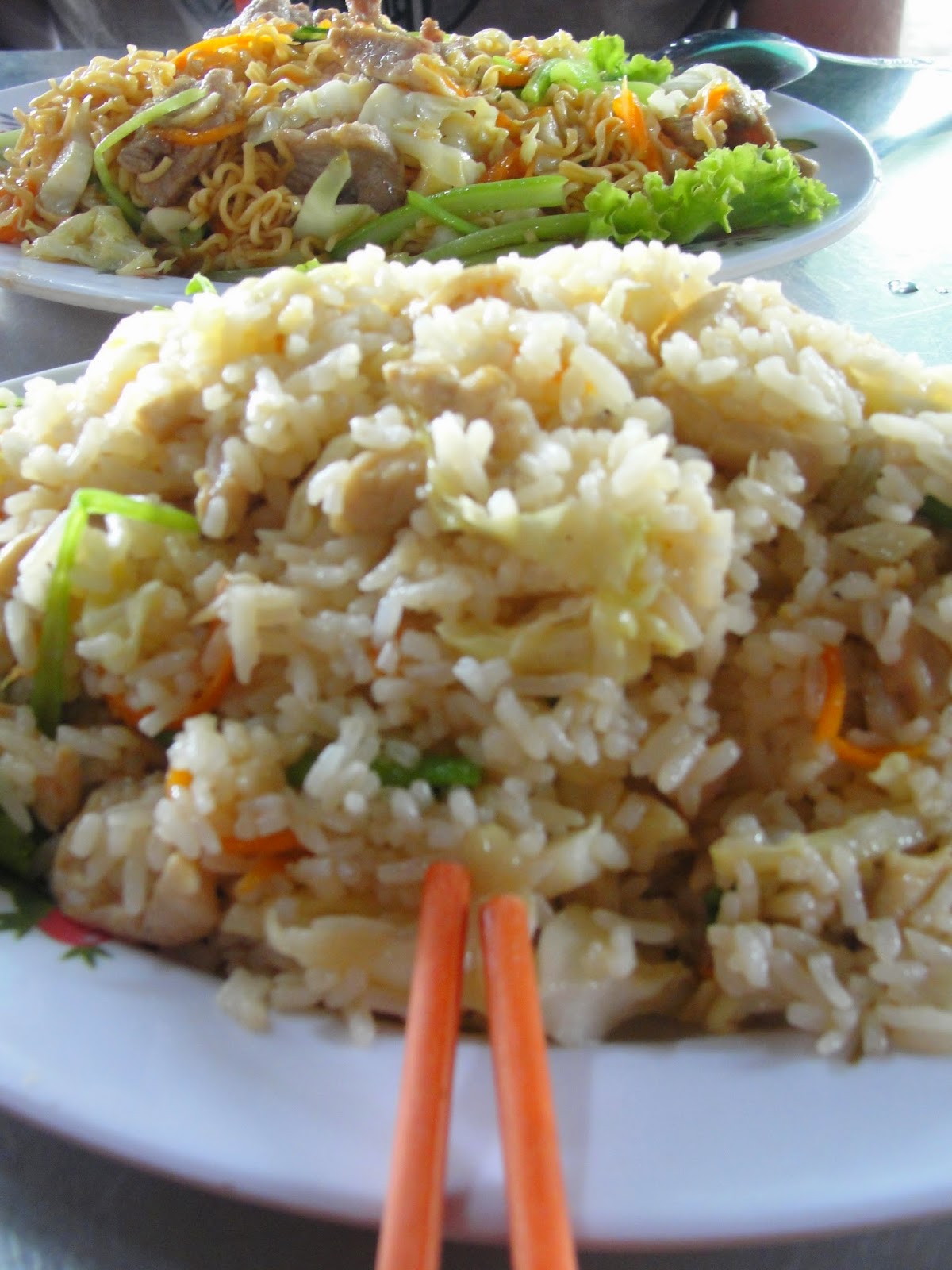 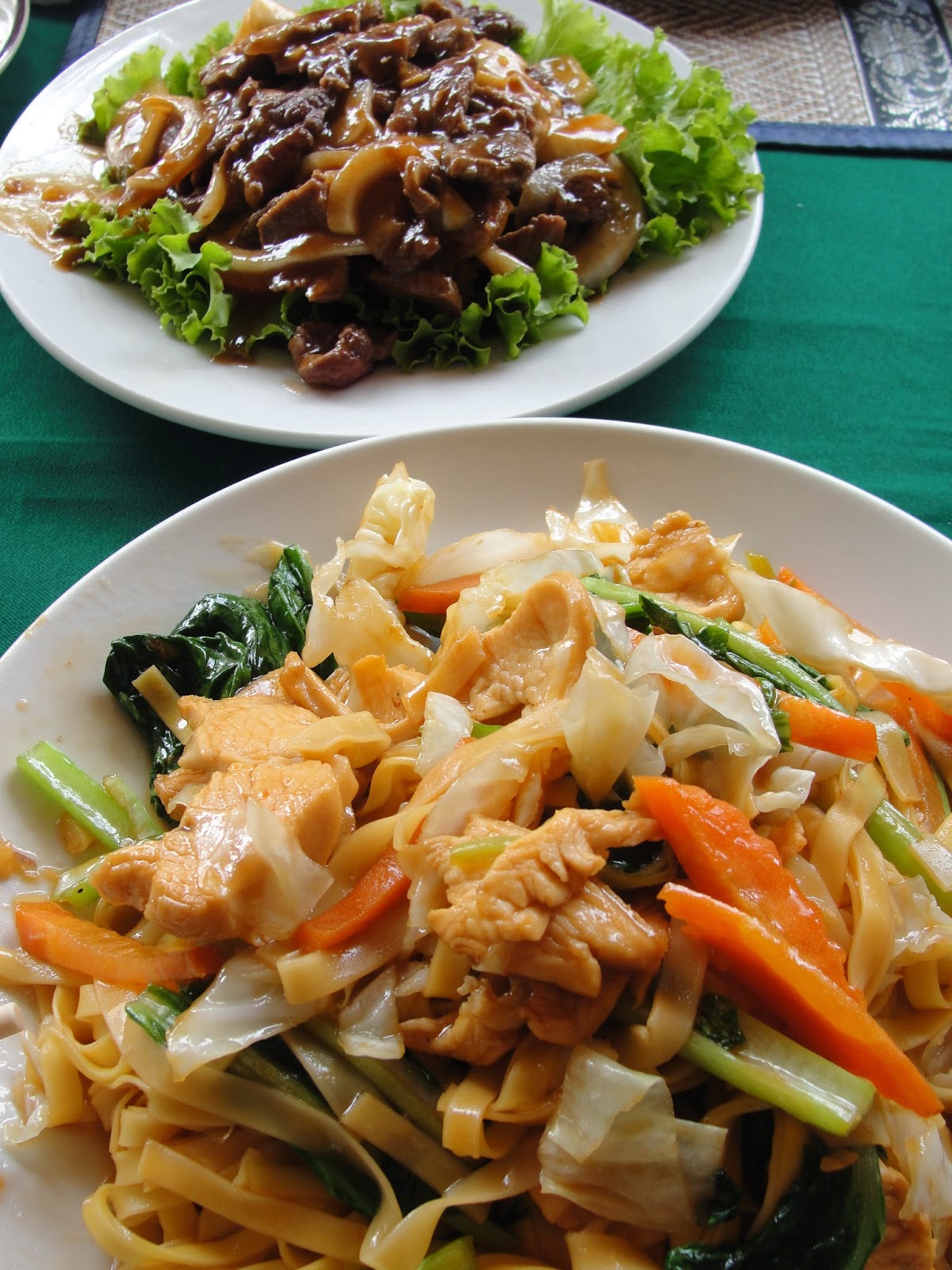 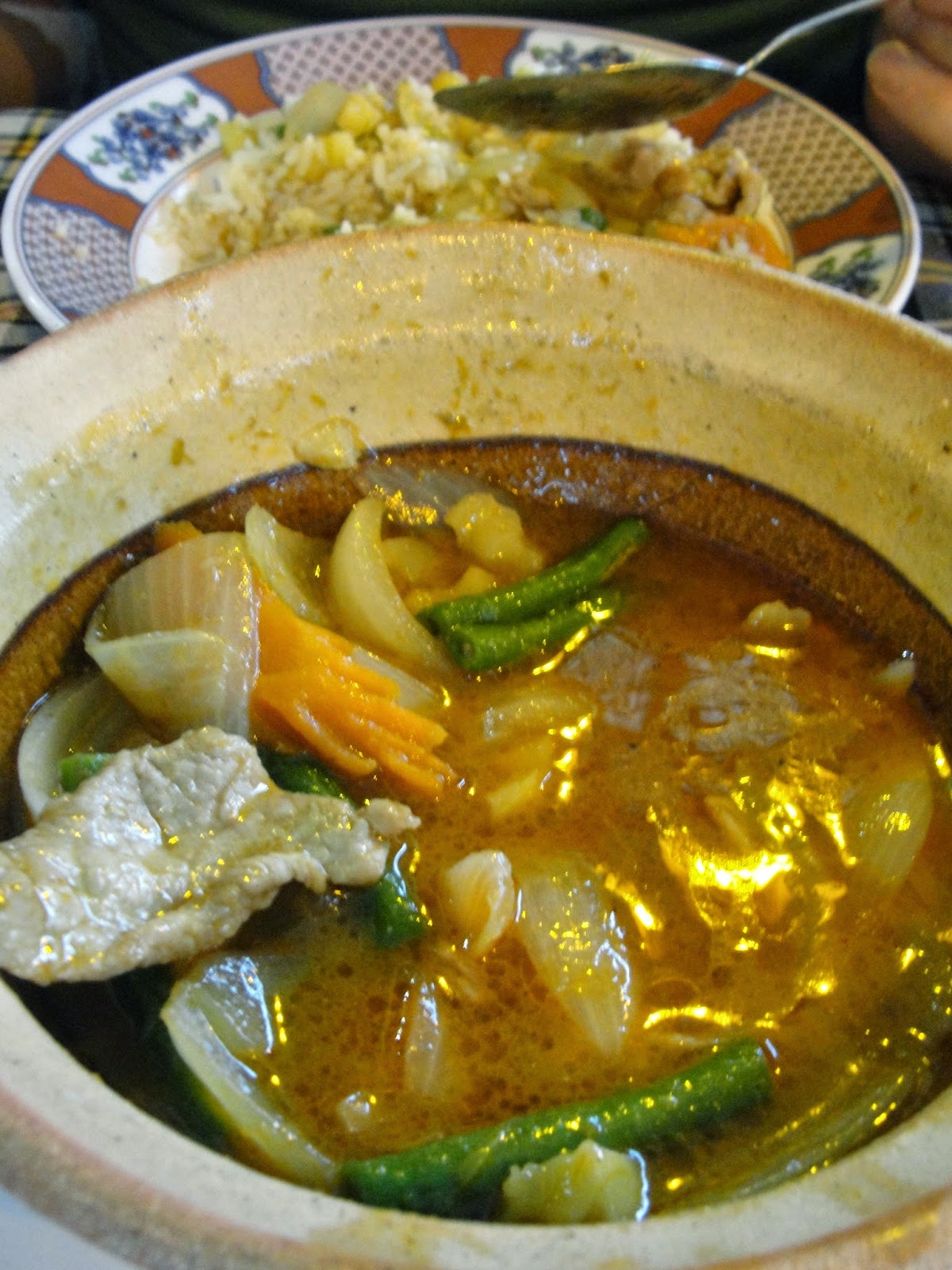 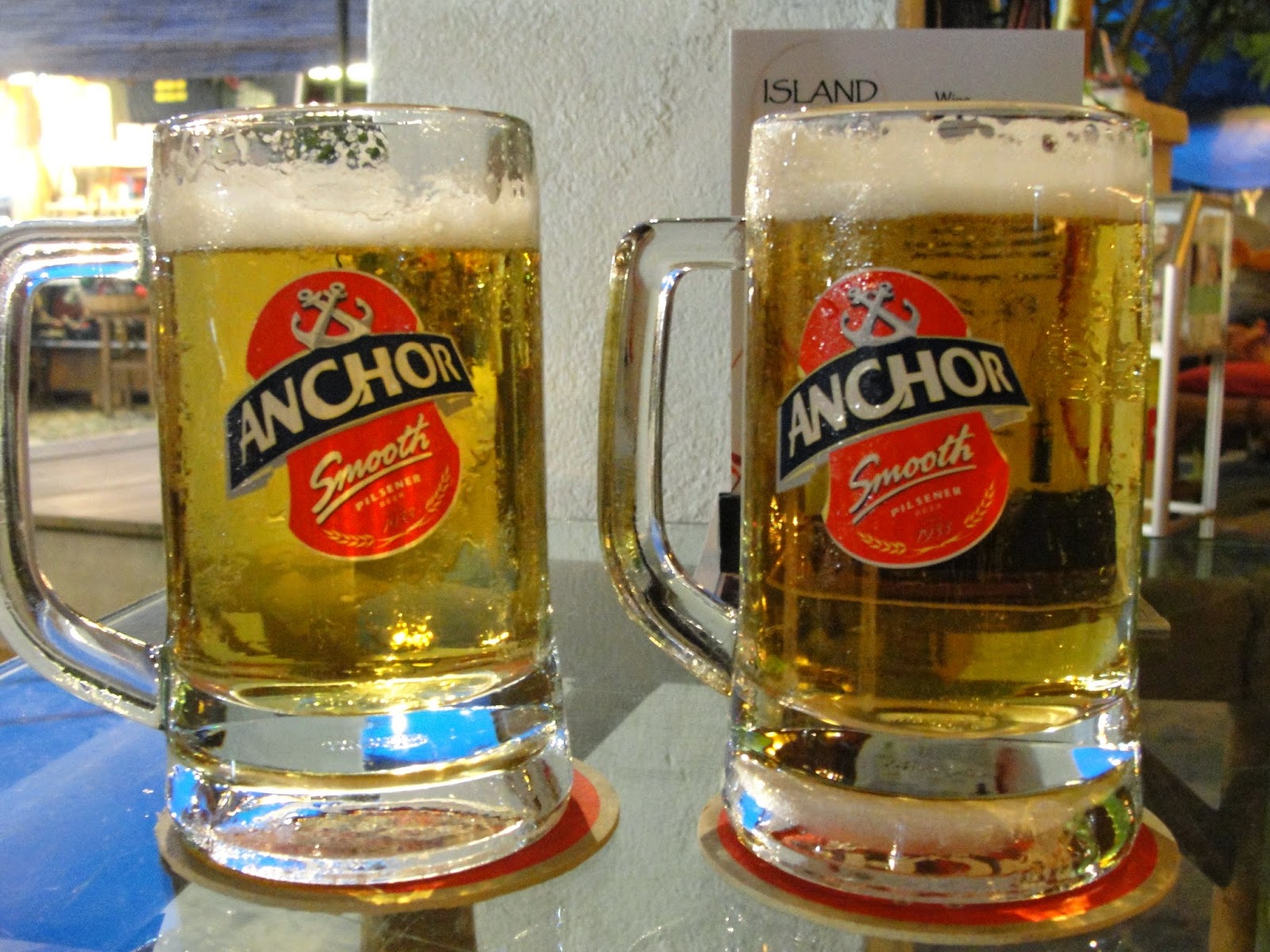 the draught Anchor beer is $0.50
(it's as good as any other Asian beer) 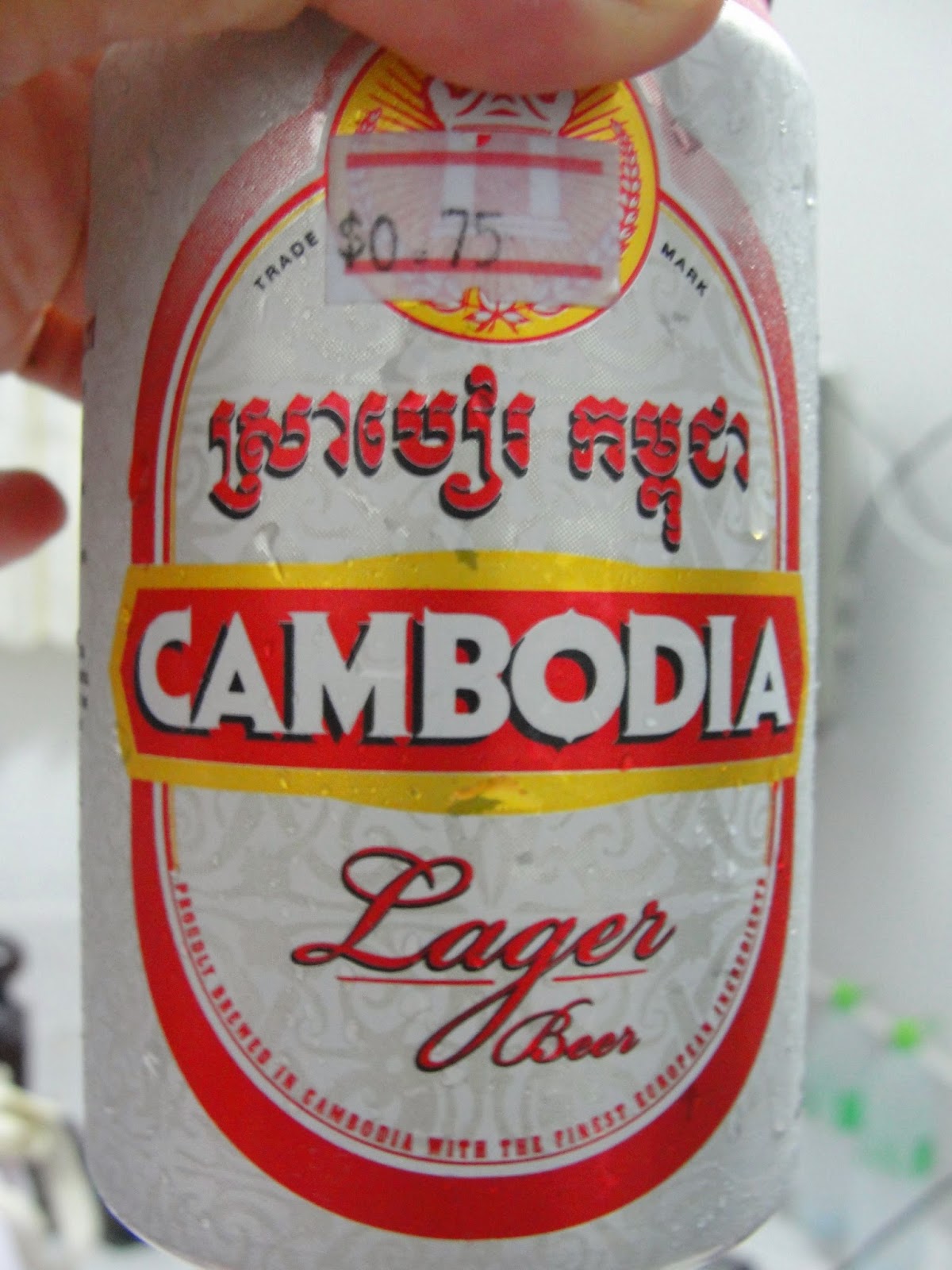 later, Jen finally found an Asian beer at the market
that she was actually excited to drink 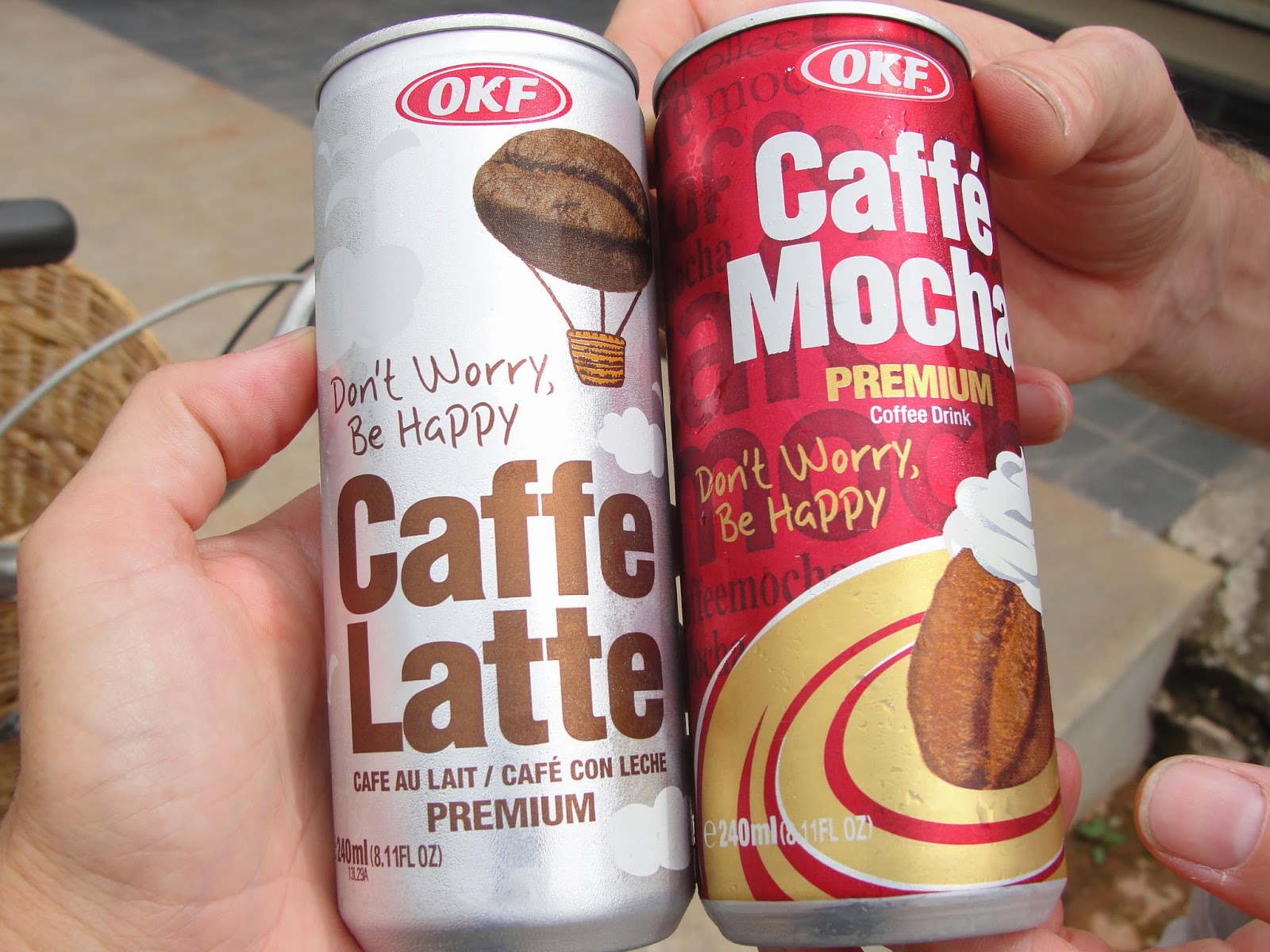 pretty bad, actually
unless you're desperate

Lodging notes: Orchide Siem Reap Lodge! Totally recommend it. So convenient, such a nice family runs it, what a nice change to have breakfast offered - and they even made it super early our last day so that we could eat before catching our bus. And? They do that thing with the towels. 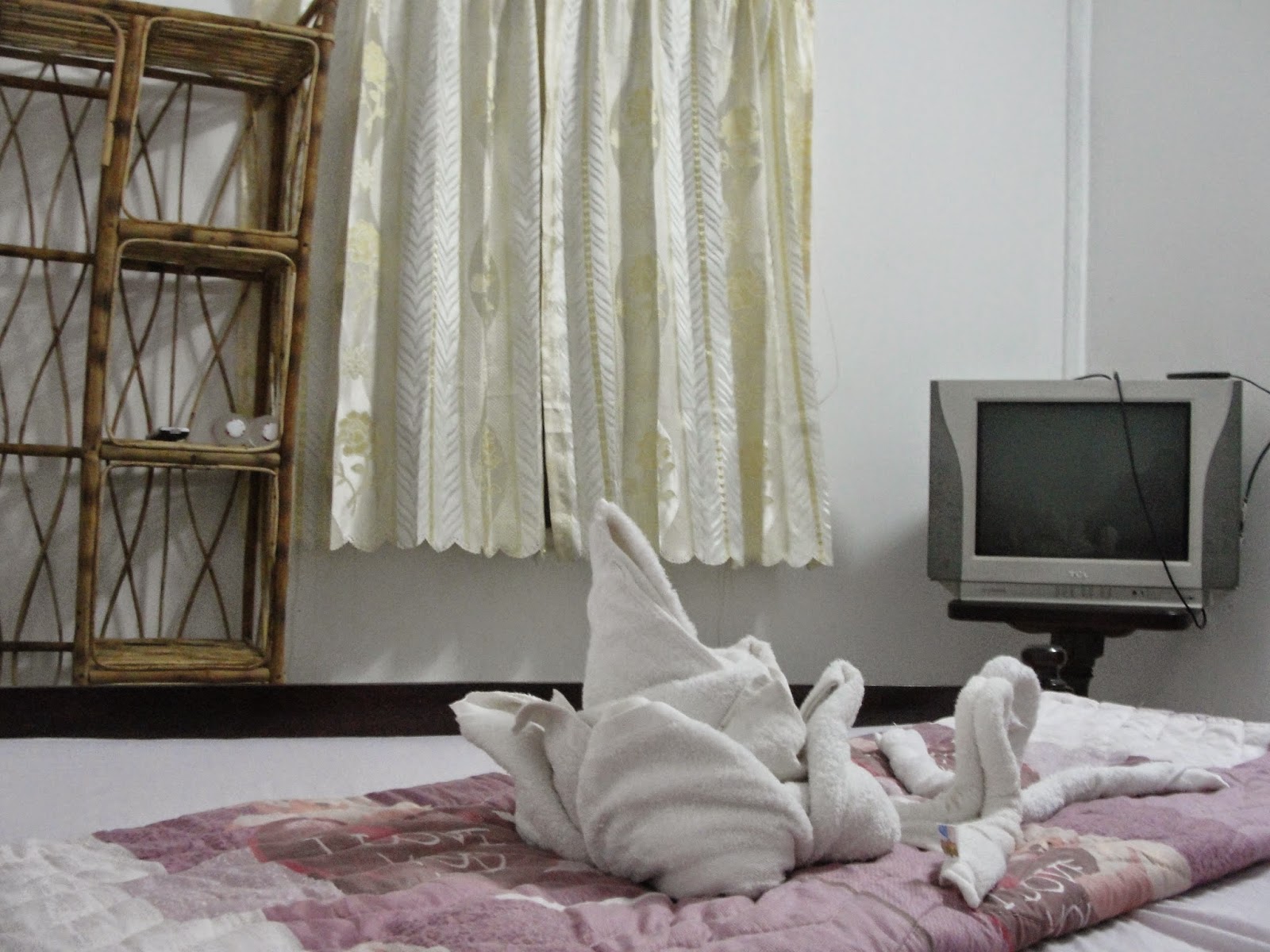 you know, that thing
with the towels

We'll probably have to stop in Siem Reap again before heading back to Bangkok for our Nepal flight. We're not particularly excited about it - the city has a weird Vegas-like feel to it. But at least now, we know of a nice place to stay and we know our way around town.

Next up: Kamphon Cham. What's there? We have no idea, but we're about to find out!
Posted by Jen
Email ThisBlogThis!Share to TwitterShare to FacebookShare to Pinterest
Labels: asia, cambodia