Global Village builds: how they work. (In Cambodia, anyway.)

Five months of planning and just like that, our Global Village (GV) Cambodia build is finished. Crazy!

You know why we did this and you've already met the families served. In a future post we'll talk more about what we actually built during our GV week, but first... When we were fundraising, lots of you mentioned that you didn't know Habitat for Humanity (HFH) built houses overseas so we wanted to take this opportunity to explain a little about how GV works.

For many years, Habitat for Humanity International, Habitat Canada and many other national affiliates have helped build or repair more than 800,000 houses and served more than 4 million people worldwide. This work includes local builds as well as GV builds that operate in 40 countries.

GV builds are usually 1-2 weeks long, they're comprised of 12(ish) volunteers, and they include three main "components" (by Jen's count and categorization, anyway): the prep work, the construction work, and the teambuilding. HFH is actually pretty consistent across affiliates and these "components" seem to be similar whether you're doing a local blitz or an international build - details will vary, but the gist is universal.

The prep work involves finding a build that suits your schedule and interests, talking with the team leader to make sure it's the right build for you and for HFH, and filling out some paperwork. Also, Global Village builds are fundraisers so you'll either need to front the participation costs or do what we did - raise the money. (Thanks again to all of our generous donors!) From there it's just a little more paperwork and a lot of coordination emails from the team leader. Our rescheduled Phnom Penh build took about five months from initial contact to "groundbreaking"; our cancelled Bangkok build also would've taken about five months.

Oh - a large portion of your participation costs are a donation to the local affiliate. Airline tickets, passports, visas, alcohol and other personal expenses are all on you, but food and lodging are also covered by your participation costs. The HFH team lead coordinates all of that through the local affiliate. If you join a Cambodia build, you won't get a suite at the Four Seasons but you will definitely be very comfortable and well-fed. The team lead also brings lots of first aid supplies and HFH provides medical insurance as part of the program.

Then comes the fun part - the construction work! Our build was just one week, Monday through Friday. Each morning we had meetings with the construction crew to get our assignments and daily goals. 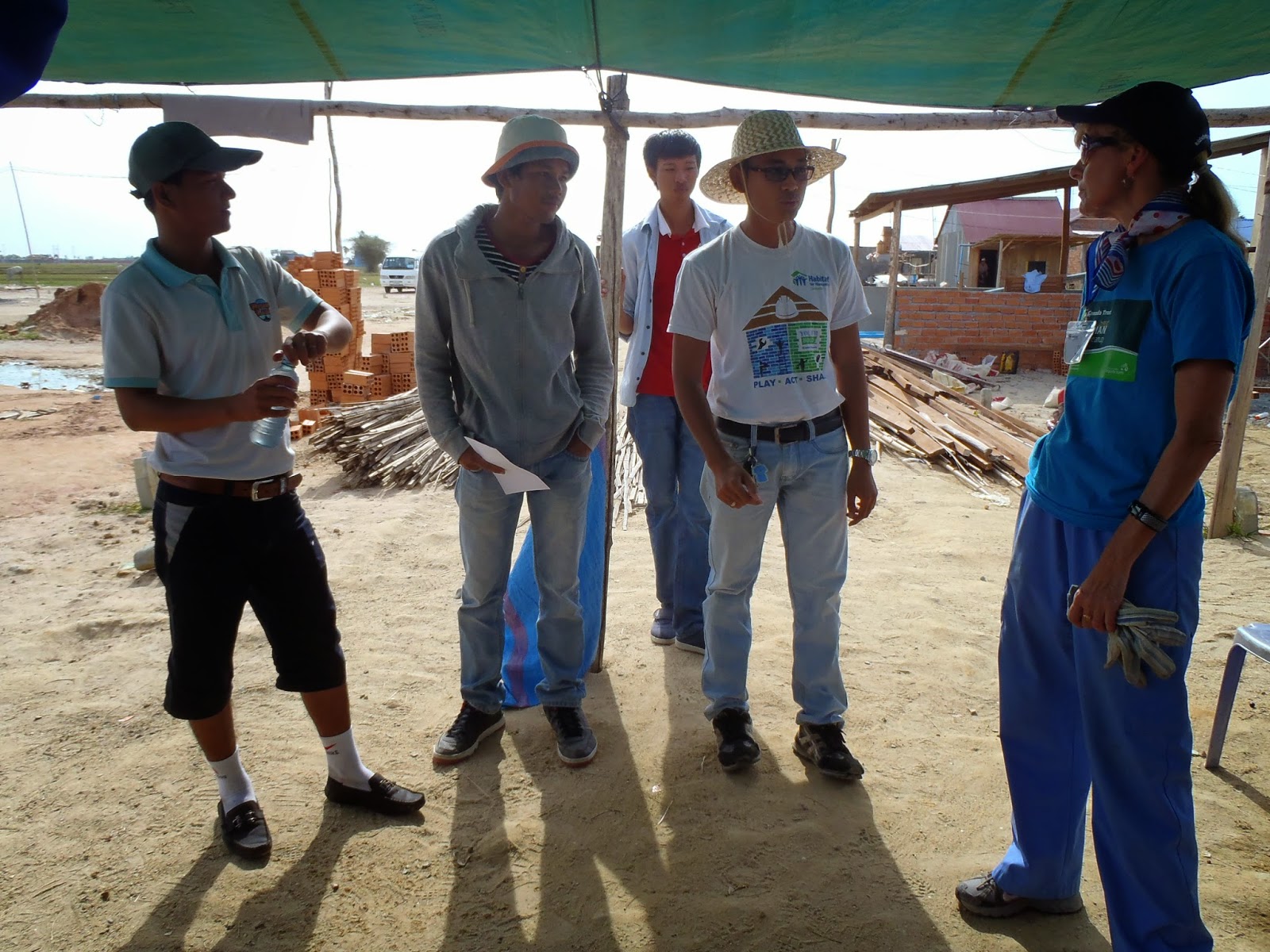 After the morning check-in we broke into teams and got stuff done. It was really hot, and throughout the day our assigned "buddies" made sure we had enough sunscreen, water, food, electrolytes, and anything else we might need. We also took mandatory breaks around 10:30am and 2:45pm where we enjoyed a bounty of local fruit, new band-aids, rest and re-hydration as needed. 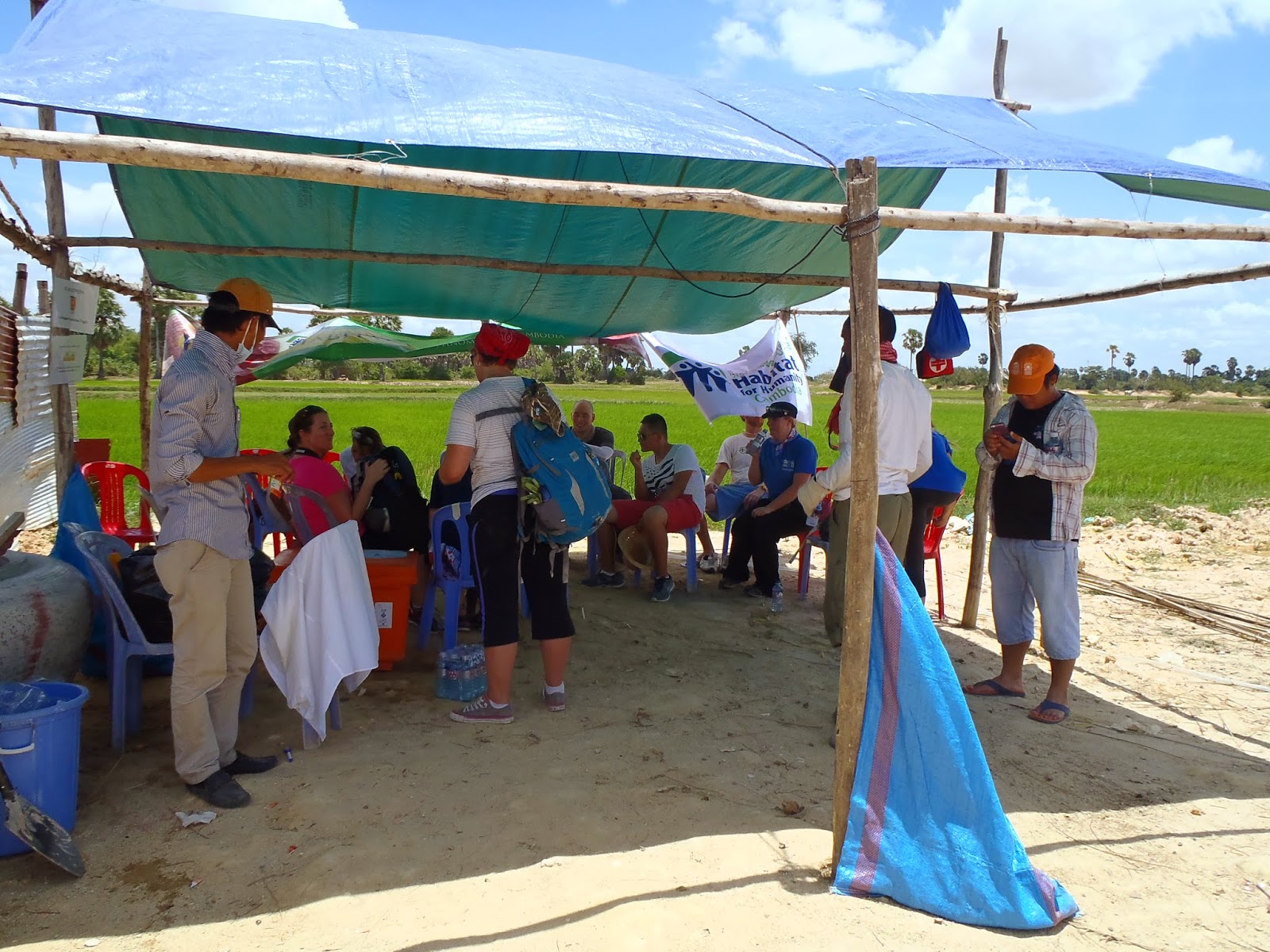 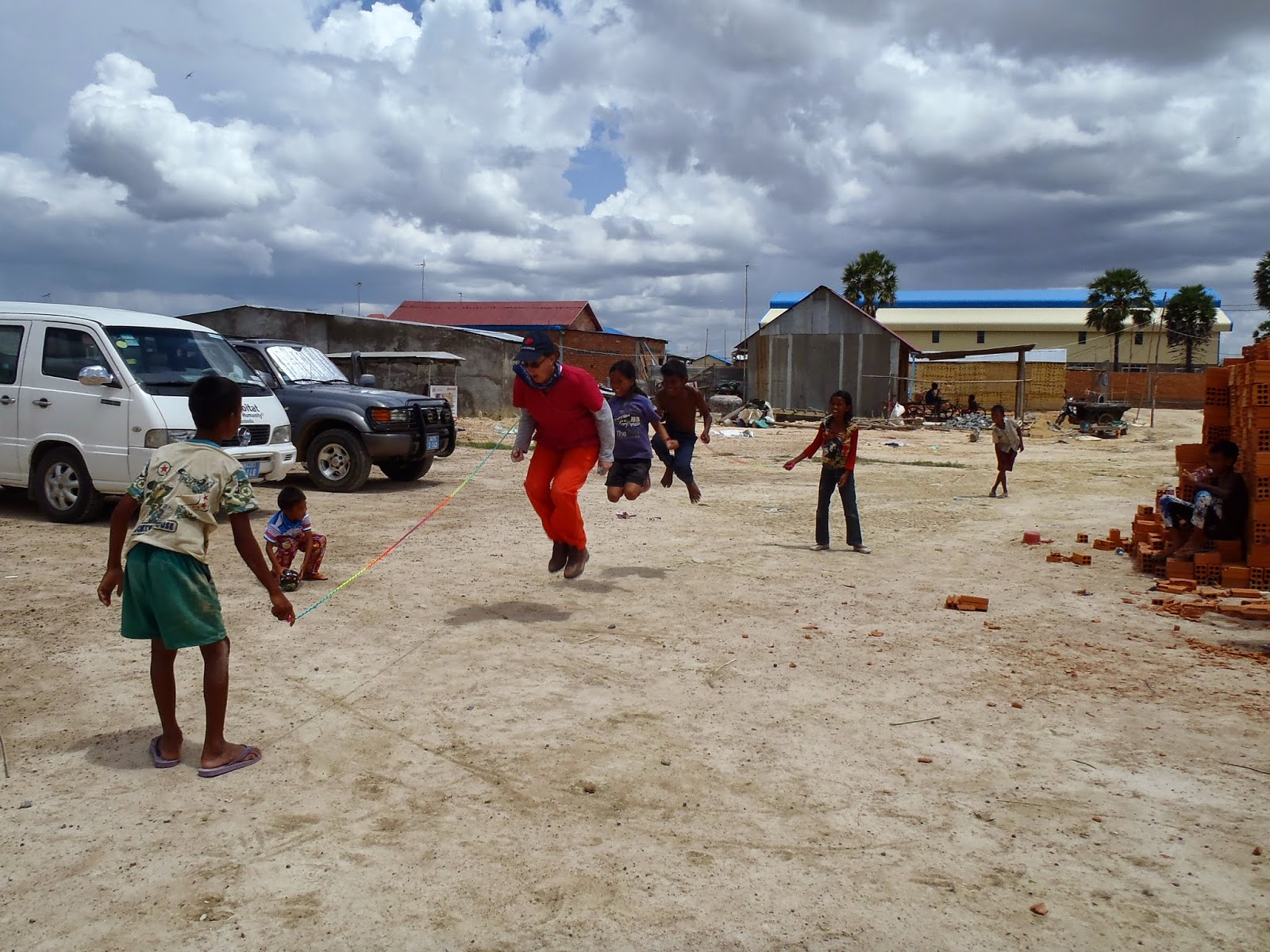 sometimes during breaks we jumped rope with the local kids
(by "we", we mean Jane and Clare) -
building friendships in communities is important to HFH

HFH Cambodia staff, local English-speaking volunteers, and skilled workers on site also checked in on us constantly. Even the skilled workers who didn't speak much English would occasionally give a hand signal to make sure we were okay or wave us over to the tent to make sure we were all taking care of ourselves in the heat. They also made sure the work site was safe. And they made sure we had fun!

Speaking of all those guys... They were really amazing. We had a new house design and three different construction leads throughout the week, yet every day went incredibly smoothly. The staff and volunteers answered our endless questions about HFH Cambodia and Khmer culture; they taught us local songs and Khmer words and phrases. The skilled workers patiently mimed instructions, calmly stood by as we took five minutes to do a task that would take them thirty seconds, and smiled as we practiced (and likely butchered) our newly-learned Khmer phrases. 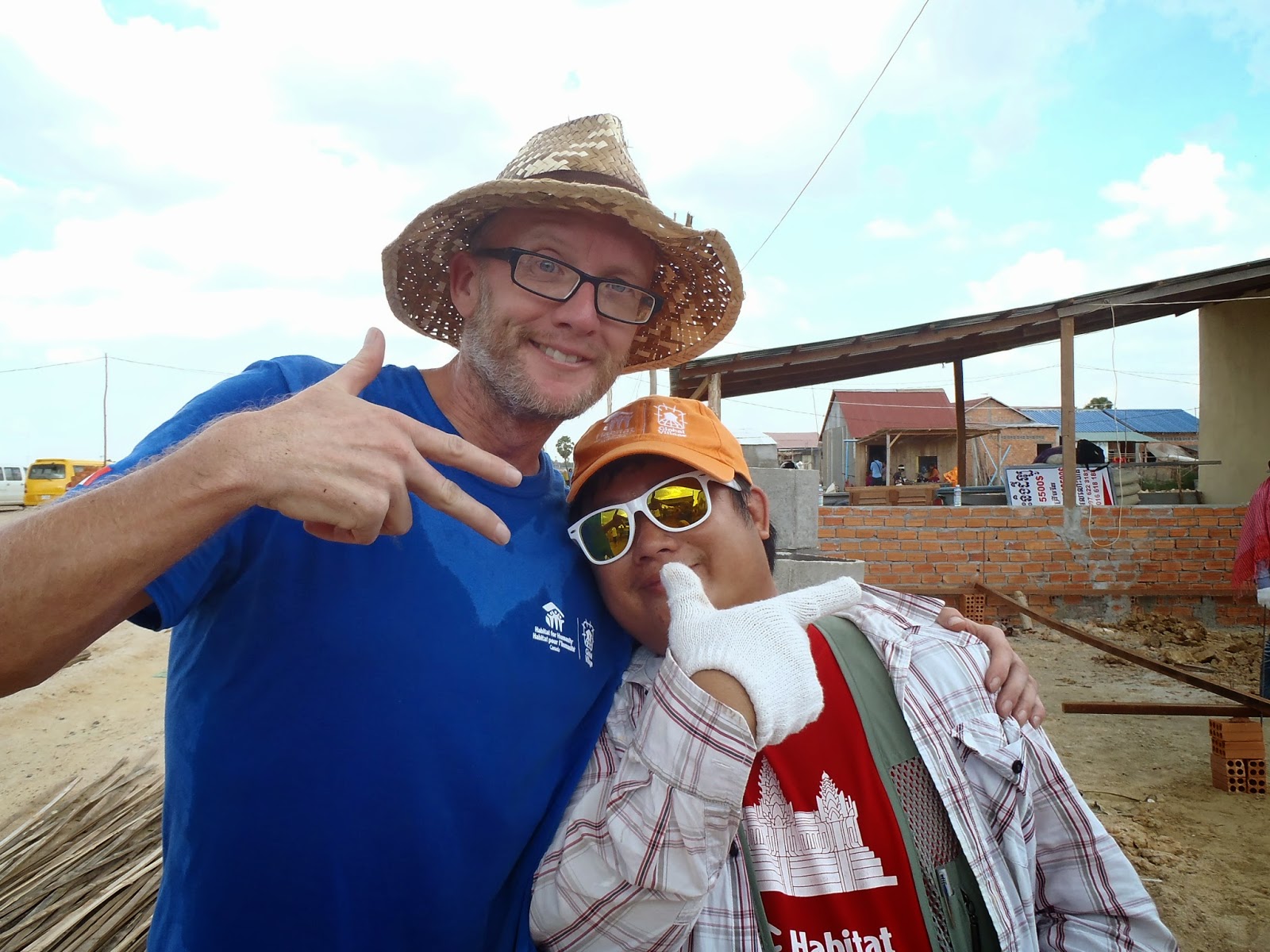 everybody loves Samvitay - AKA "Raymond"! 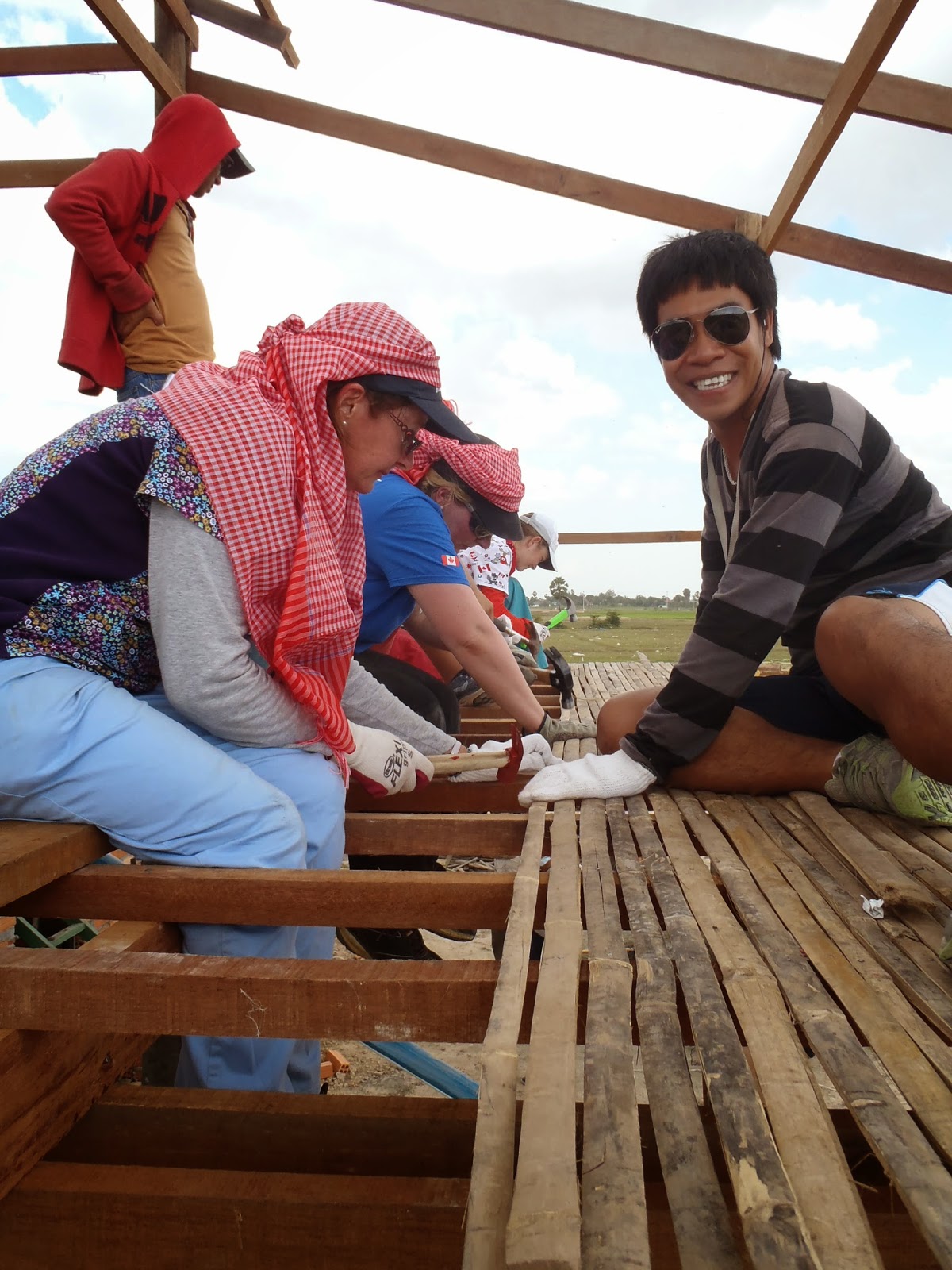 Bunseng ("Eric") hamming it up
while the team hammers it up 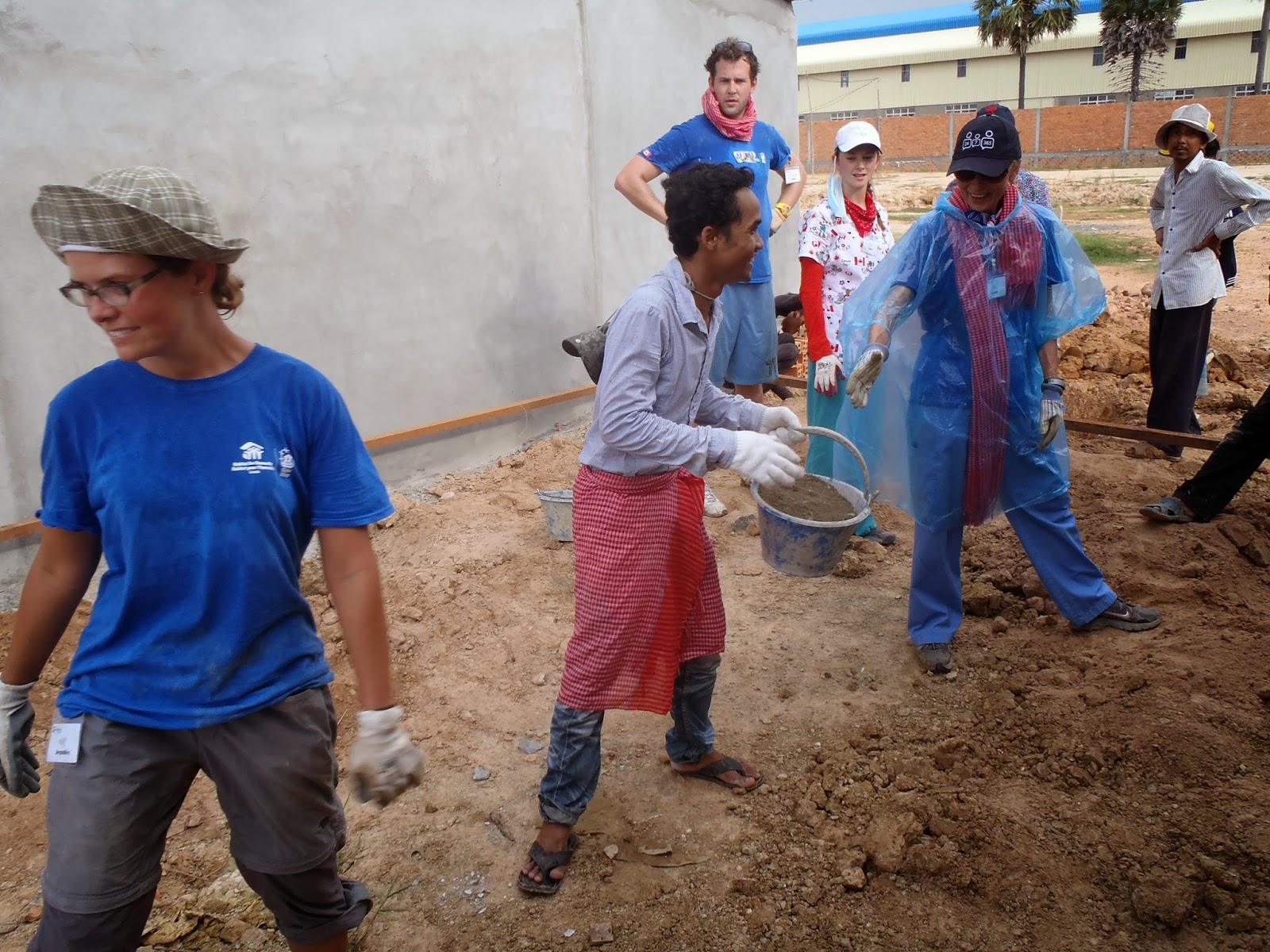 Chhay ("Tel") lending a hand for the bucket brigade 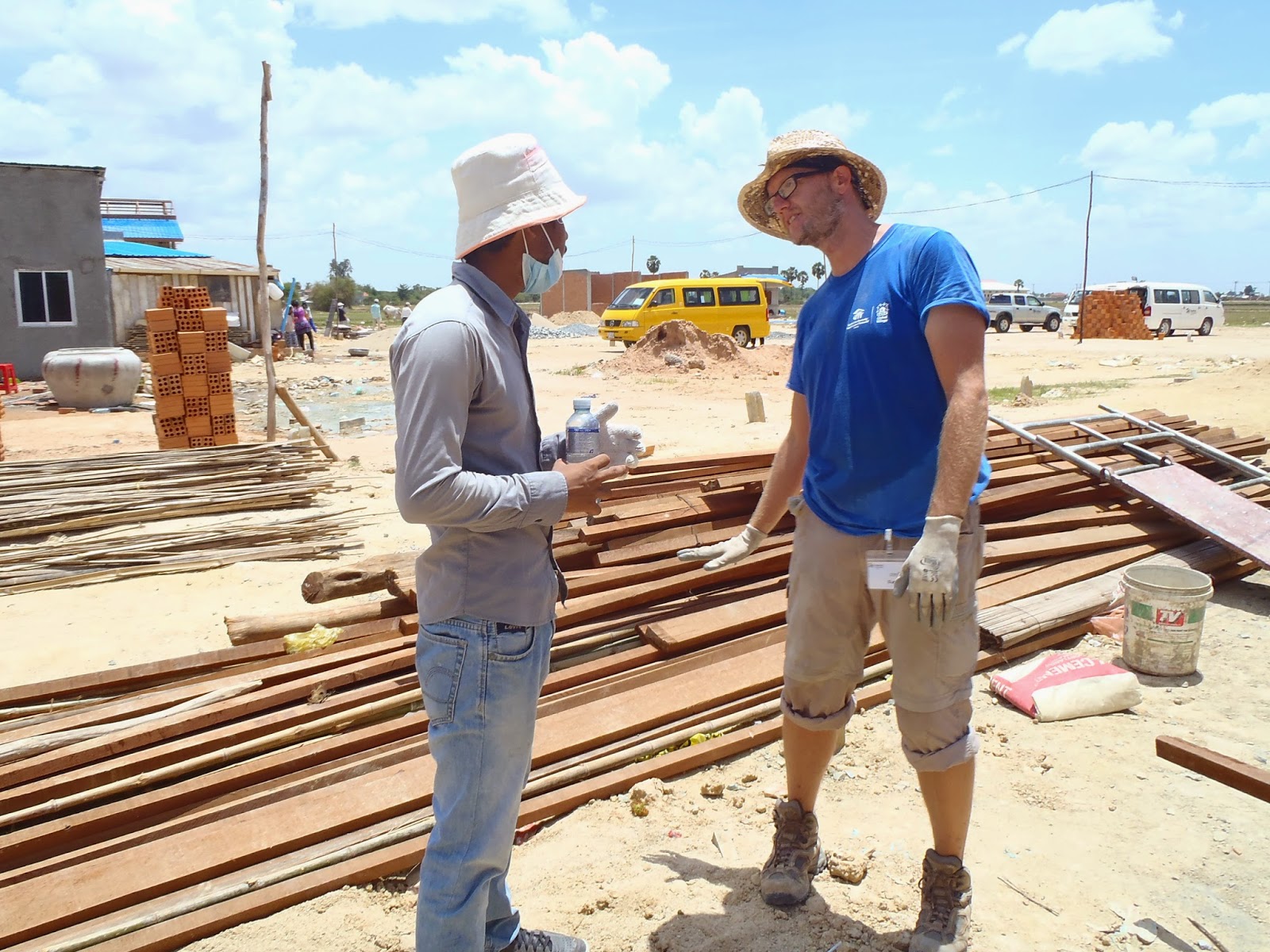 chatting with "Peter" during one of the breaks 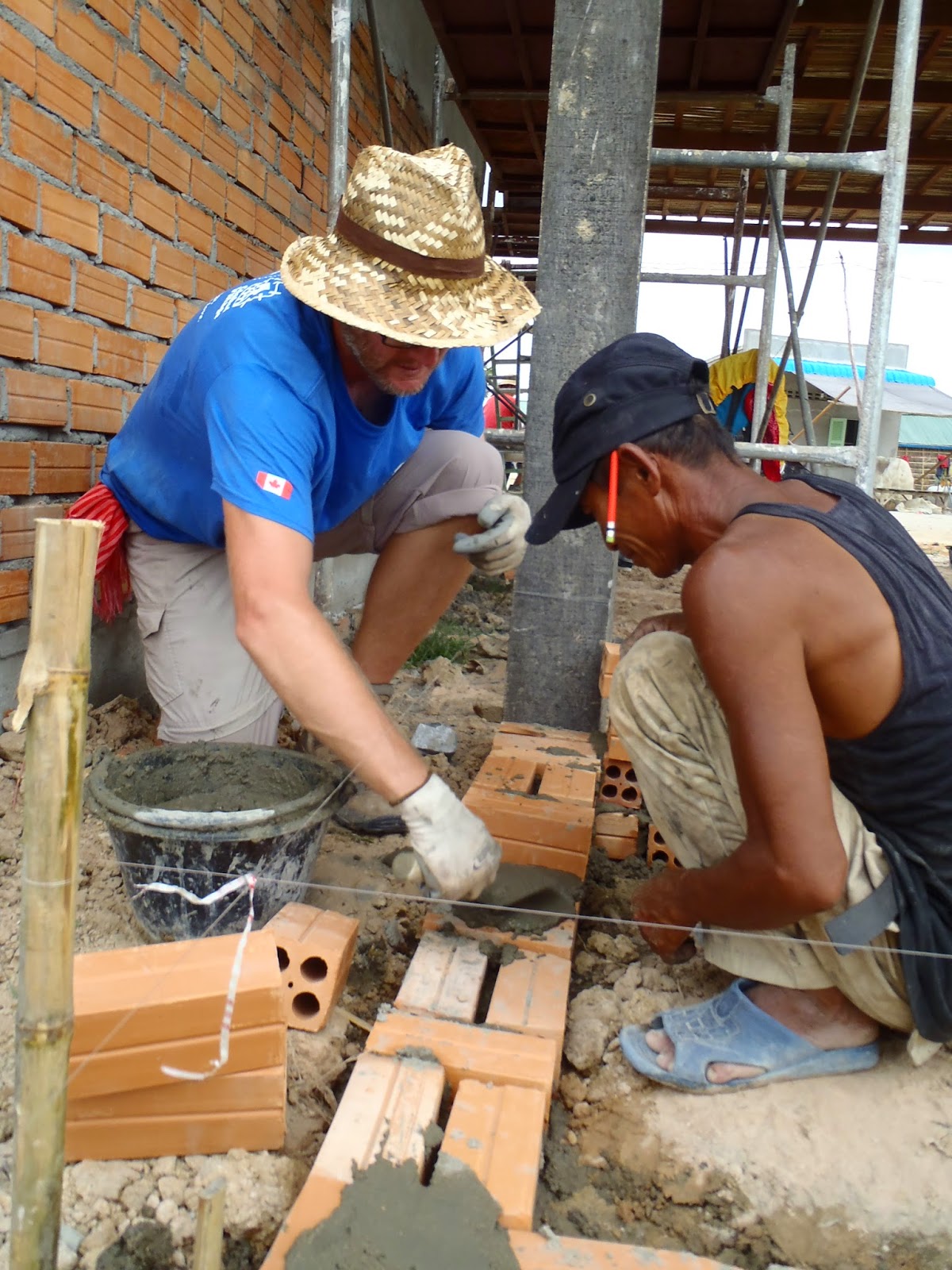 We stopped for lunch each day around noon. Food was brought in from Phnom Penh and we took a short bus ride to a local restaurant to enjoy our meals in a less dusty, more comfortable setting. One day the locals were having a big party at the front of the restaurant and Patrick made some new friends. (Photo coming soon.) 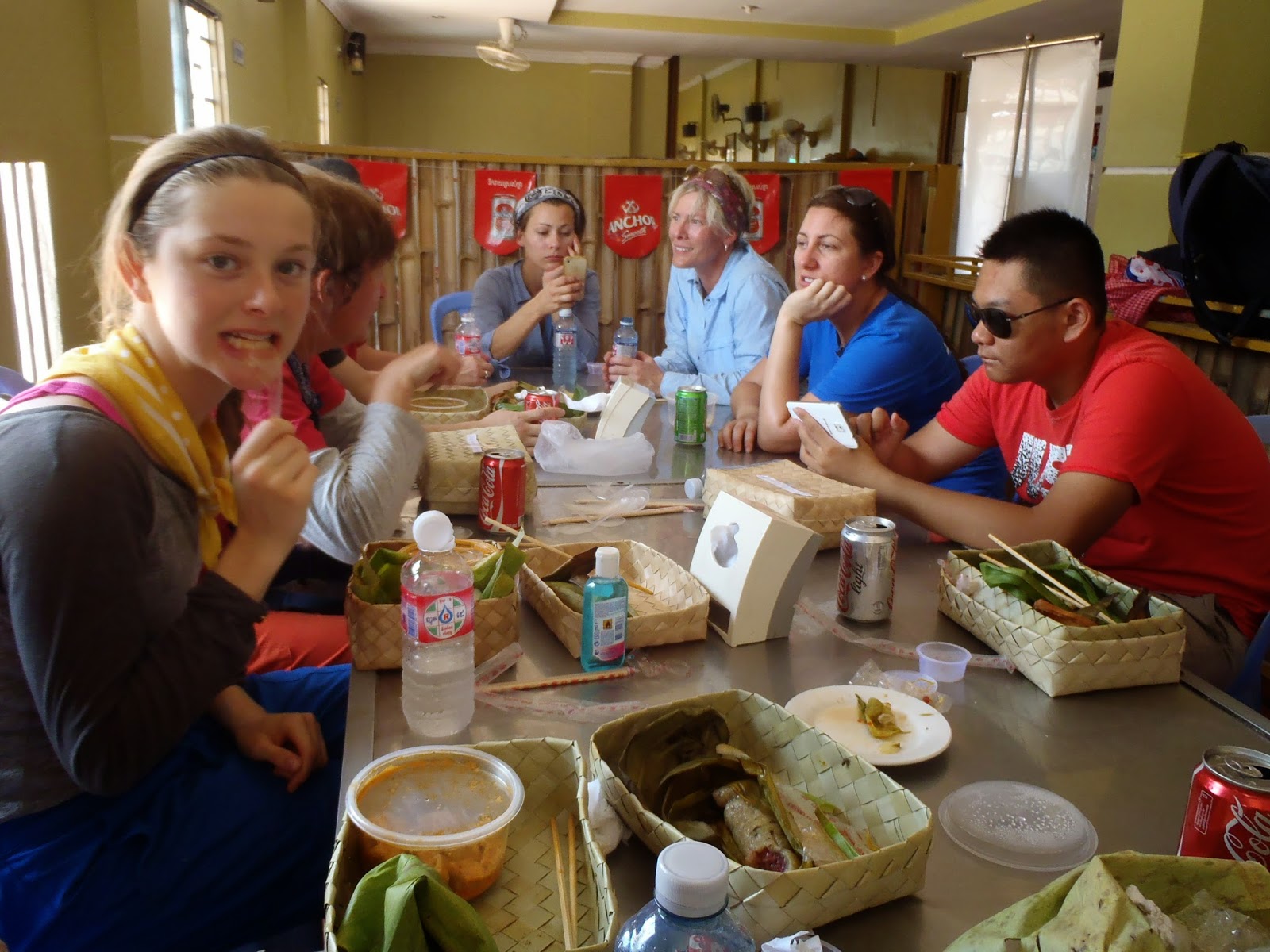 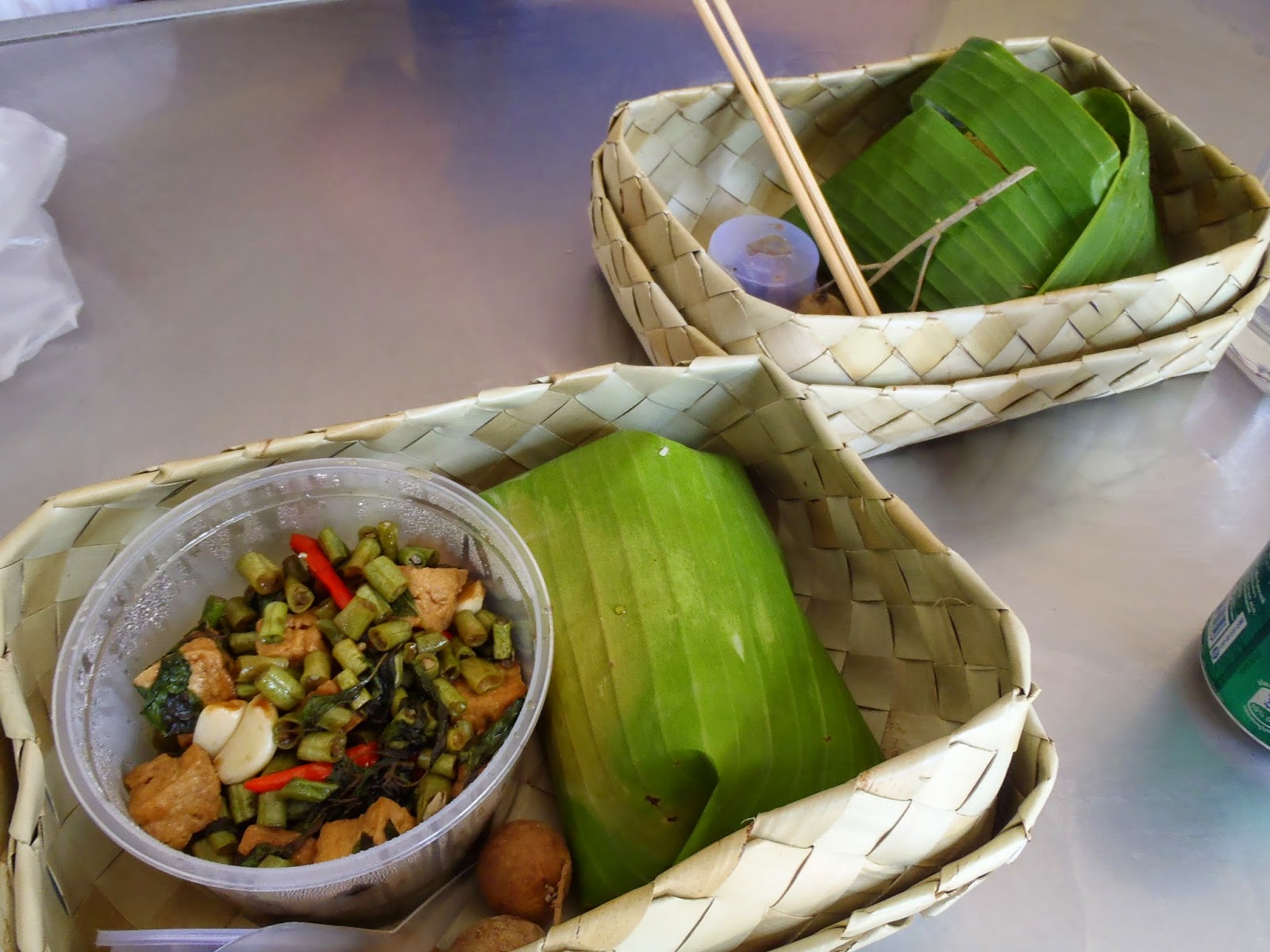 a typical lunch -
main dish of your choice, rice wrapped in banana leaf,
fruit for dessert

After lunch we got our afternoon assignments. By then it was hotter and we moved a little slower, but we kept at it. At the end of each day we cleaned up ourselves and the work site, got in the van, and prayed for light traffic. Sometimes we got lucky. Sometimes it took 90 minutes to get home. 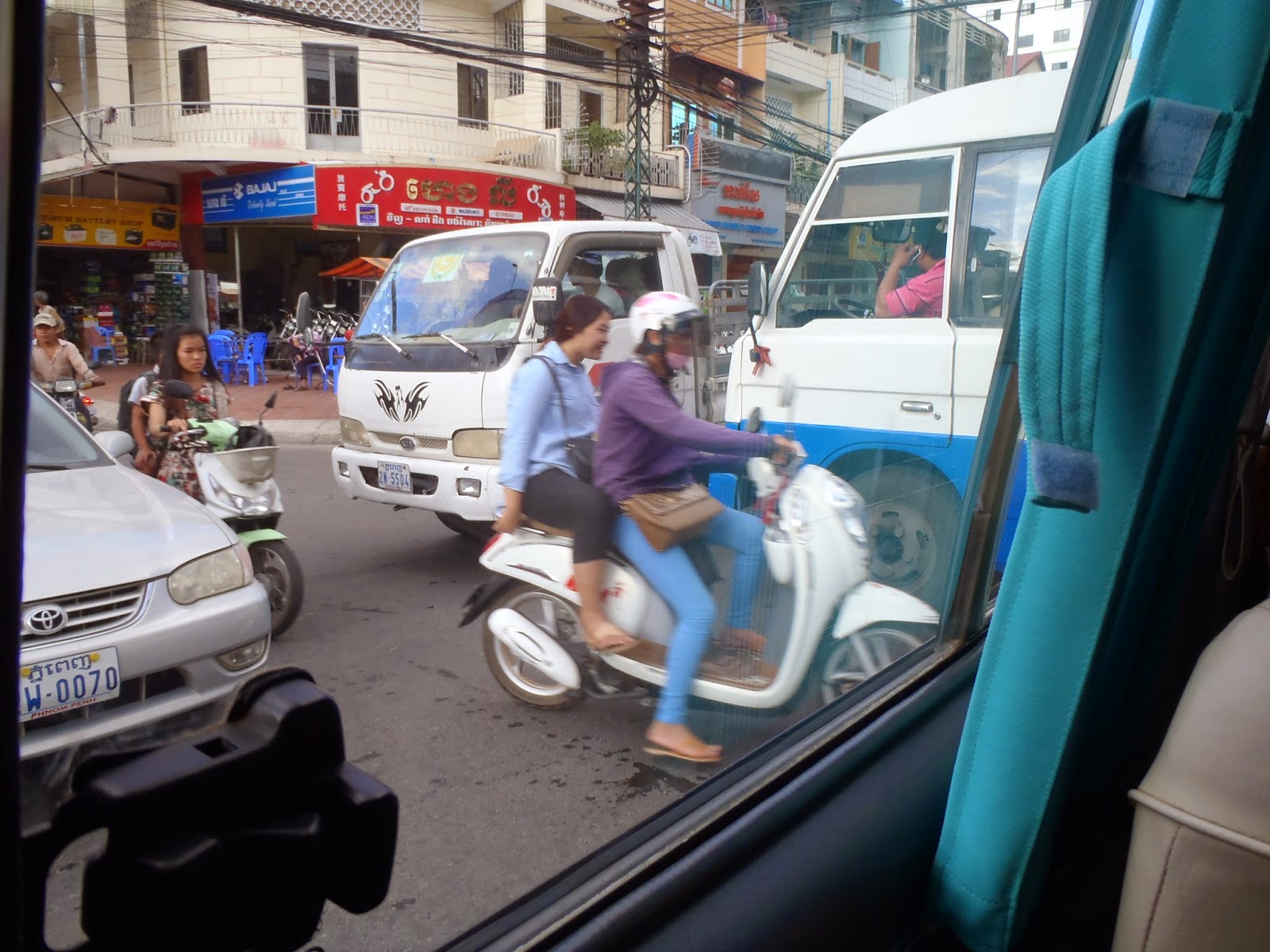 for example, this day, when the pinwheel
of cars with motorcycle center reached an impasse... 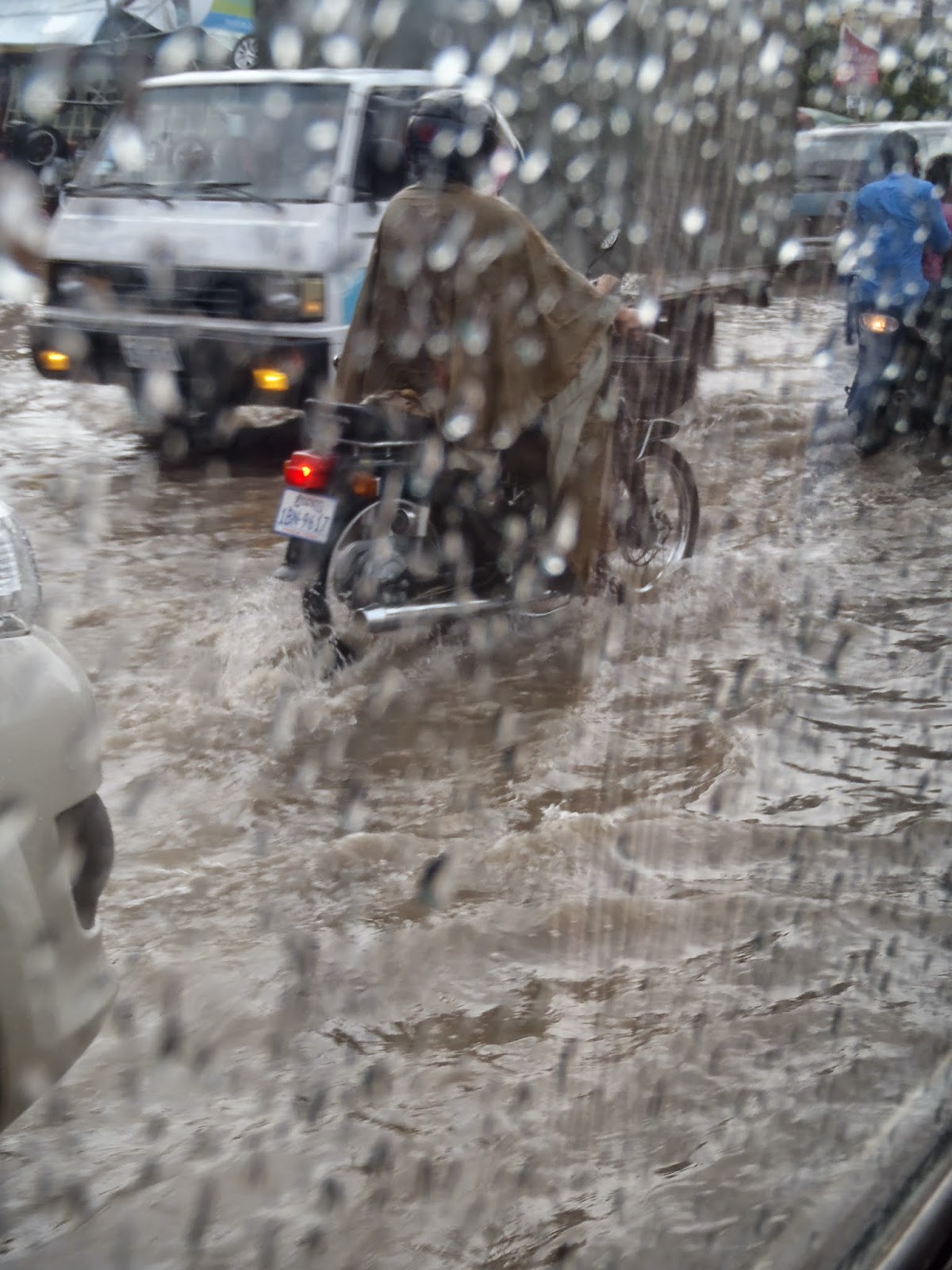 ...and this day, when
we were so thankful to be in a dry bus

One unique aspect of GV builds is the "dedication" at the end of the build. It's common for HFH affiliates to hold a dedication when a house is complete, that's not really unique. But since GV builds are often short, sometimes the houses don't get finished. Doesn't matter - part of the program still includes a wrap-up dedication as a symbolic gesture for the families and the volunteers. More on that later... But we did finish a house and this is how our work week ended. 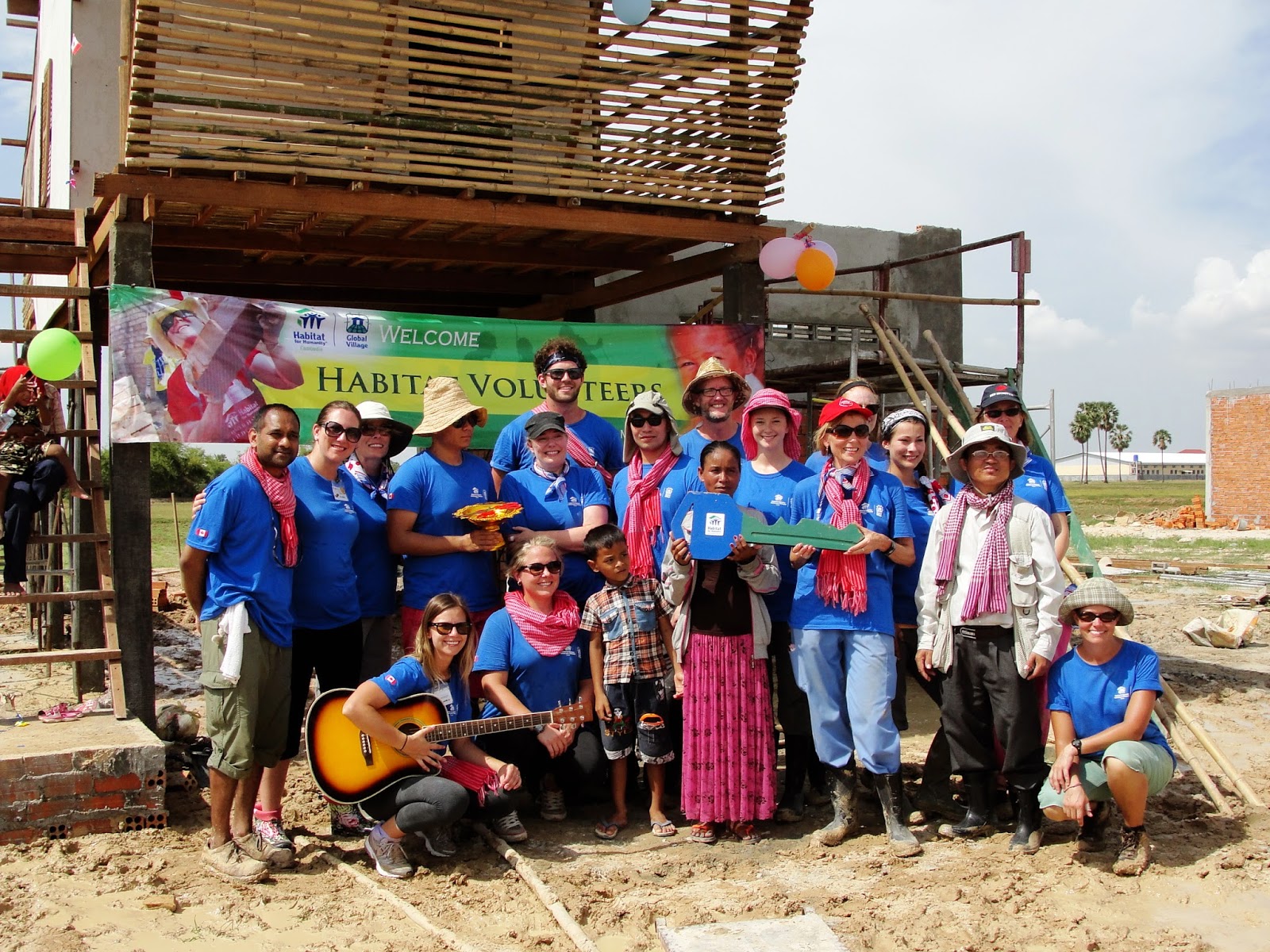 who doesn't love a giant key?

The component that's a little more prominent in GV builds is teambuilding. Some HFH affiliates push this more than others, but it's pretty critical for GV builds for a few reasons. One reason is to get a good context for the local history. We enjoyed some cultural activities together (the Royal Palace and National Museum, Wat Phnom, a tour of Phnom Penh's Killing Fields, and the team went on to the Temples of Angkor on their own dime after our build - we declined since we'd already been).

The second reason is because you spend so much time together that if you're not a functional team, you're toast. Everyone's been on a dysfunctional team at the office and they are NO FUN. So to make sure we were all in this together, we teambuilt like crazy. We had morning meetings where we took turns reading inspirational quotes. We had countless conversations about every imaginable topic over shared breakfasts, breaks, lunchtimes and dinner. We gave "studs" and "duds" awards each night - "studs" were for people who went above and beyond that day; "duds" were for you to share something about your day that didn't go so well, like smashing your finger with a hammer. We had a team journal that everyone contributed toward. We spent at least an hour in the morning and another hour in the evening riding minibuses to the work site.

Our time together started at 6:30am (earlier for some) and didn't end until 9pm (later for some). For seven whole days, nine for those who went to the Temples of Angkor.

Can you imagine? Sixteen strangers together, full time, for a full week, in a really hot and physically demanding situation? Adding to that, the fact that us two introverts have sometimes gone hours not even talking to each other for the past 450+ days, let alone 14 strangers for a week straight? Sounds insane, right?

Well, it worked - our Canada team (plus one other US representative) were really awesome! Sure, some days we were much more mentally spent than others and bonding was more challenging. But over that week, in addition to learning about Cambodia we also learned a lot about Canadian and Chinese culture (one of our team members was a Chinese high school exchange student studying in Vancouver). Several team members did other HFH GV builds and it was fun to hear how the experiences compared. Others had never been to SE Asia and it was equally fun to re-experience many of the things that have become so familiar to us at this point. 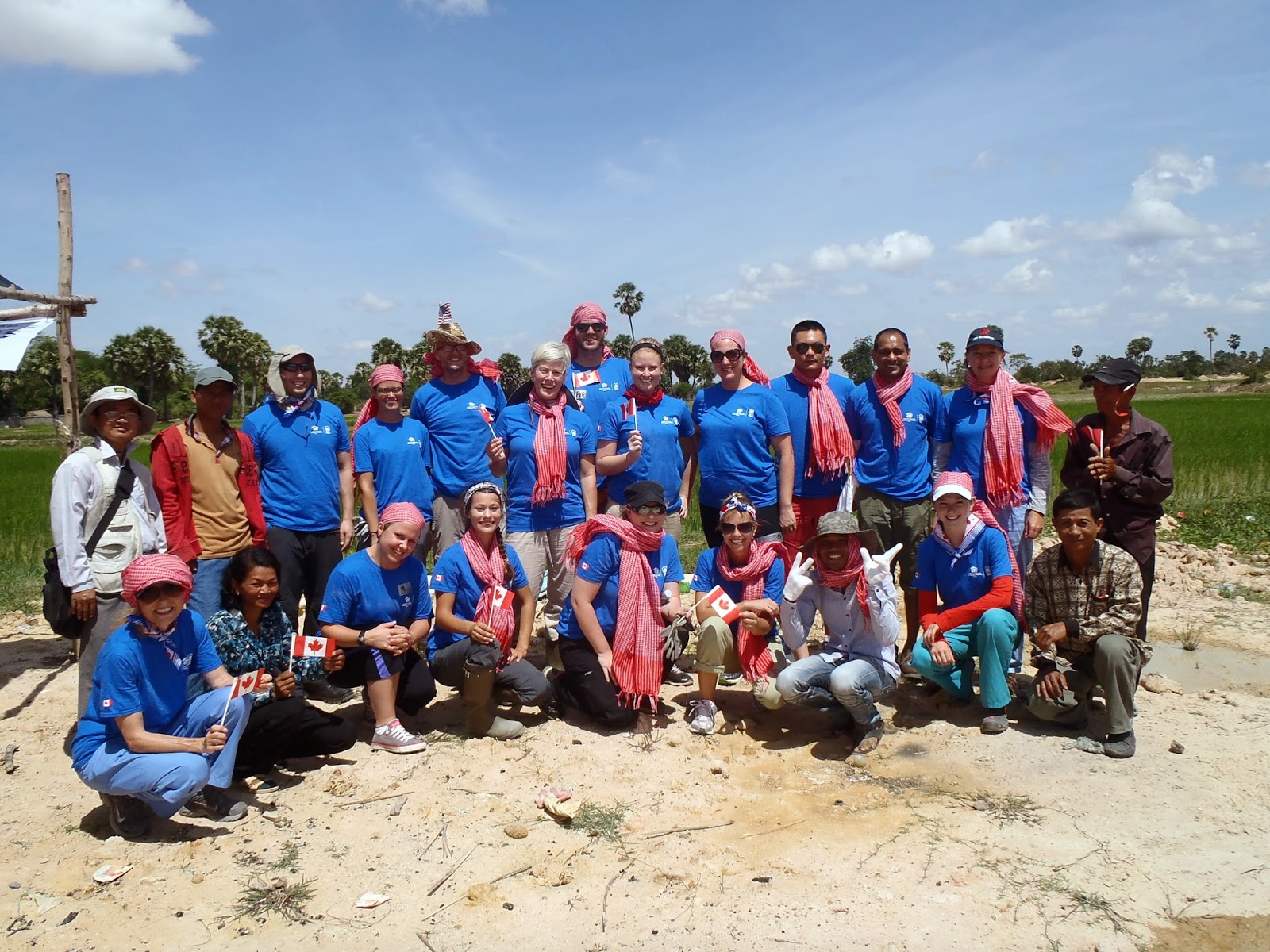 team Canada!
(with three US representatives)

This team was so awesome that the first day was the only day when we didn't accomplish our goals. The construction manager mentioned it at the end of the day - a subtle motivator, perhaps, and definitely a successful one! Everyone kicked into high gear the next day and by the end of the week we had to rotate and find pick-up work because we had finished everything on our collective list.


A third reason for such intense teambuilding is to further HFH's mission. Like we said, GV builds are fundraisers and the idea is to create such a wonderful experience that everyone goes home and tells their friends, and their friends sign up for a future build, and so on. HFH Cambodia went above and beyond to make sure we all had a good time. We certainly did and we encourage anyone who's interested to give this a go. 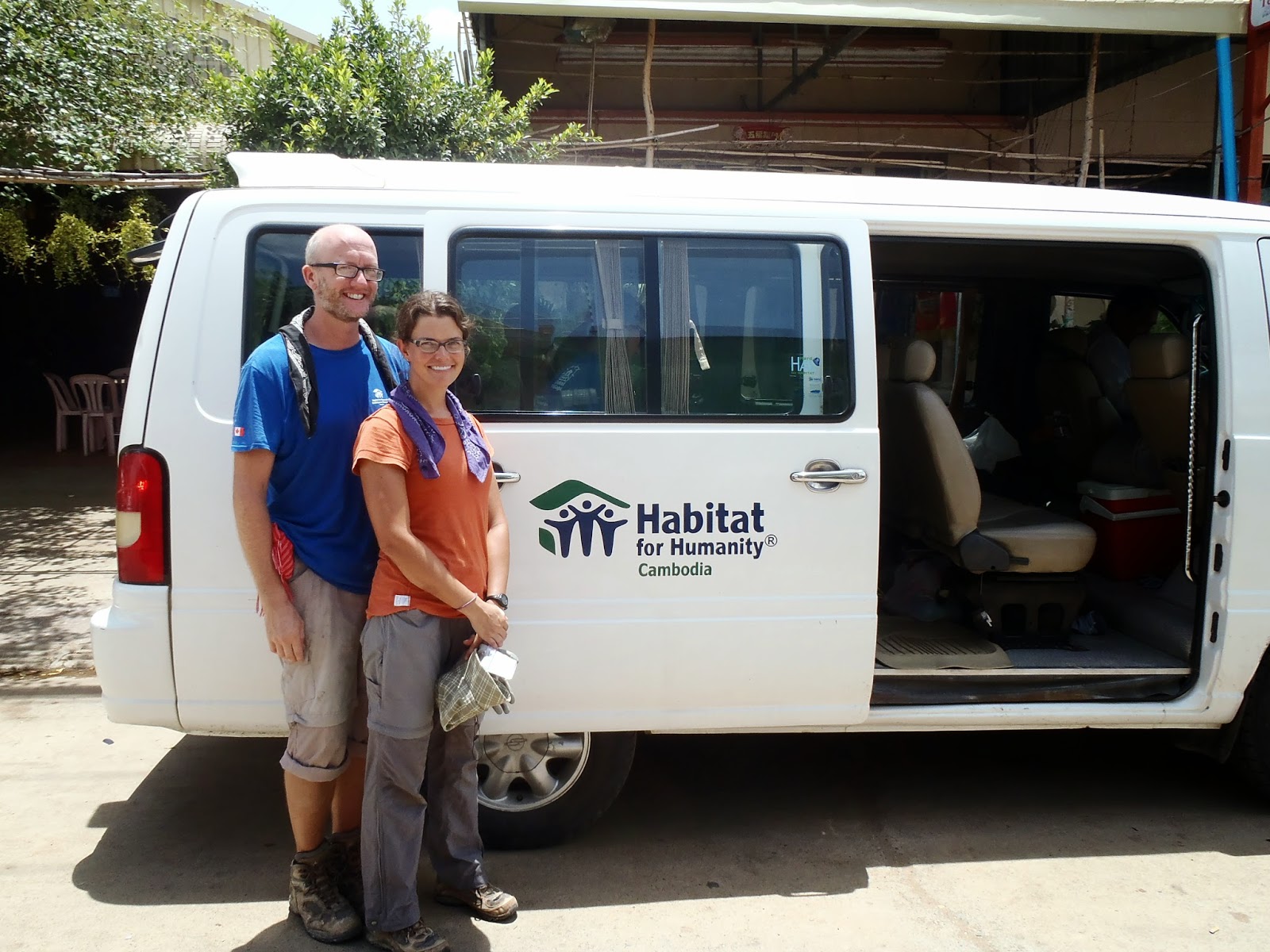 This is all based on our experience with HFH Canada and our Global Village build here in Cambodia. Your results may vary if you go through HFH USA, or if you choose a different country within SE Asia or a different region of the world altogether, or if you don't go with our fearless leader Barb - although she does A LOT of these builds so if you sign up through HFH Canada, your chances of having her as a team leader are pretty good! Your results will definitely vary if you volunteer at your local HFH build site one Saturday (do that too, though - it's really fun!).

But in the grand scheme of things, your results don't really matter. We helped to provide decent, affordable housing to two families in need. That's really all that matters in the end.

So... ready to sign up?
Posted by Slowly Global
Email ThisBlogThis!Share to TwitterShare to FacebookShare to Pinterest
Labels: asia, cambodia, FAQs, voluntourism