We were really dreading Bangkok. We pictured crammed streets lined with skyscrapers on either side, a NYC-like parade of people at every intersection, smog, mass consumerism... We put Bangkok off until the last possible minute, also known as days 55-59 of our 60-day visa. We even visited places we probably wouldn't have visited just to prolong the inevitable.


But it was totally fine. In fact, we really kinda liked it. 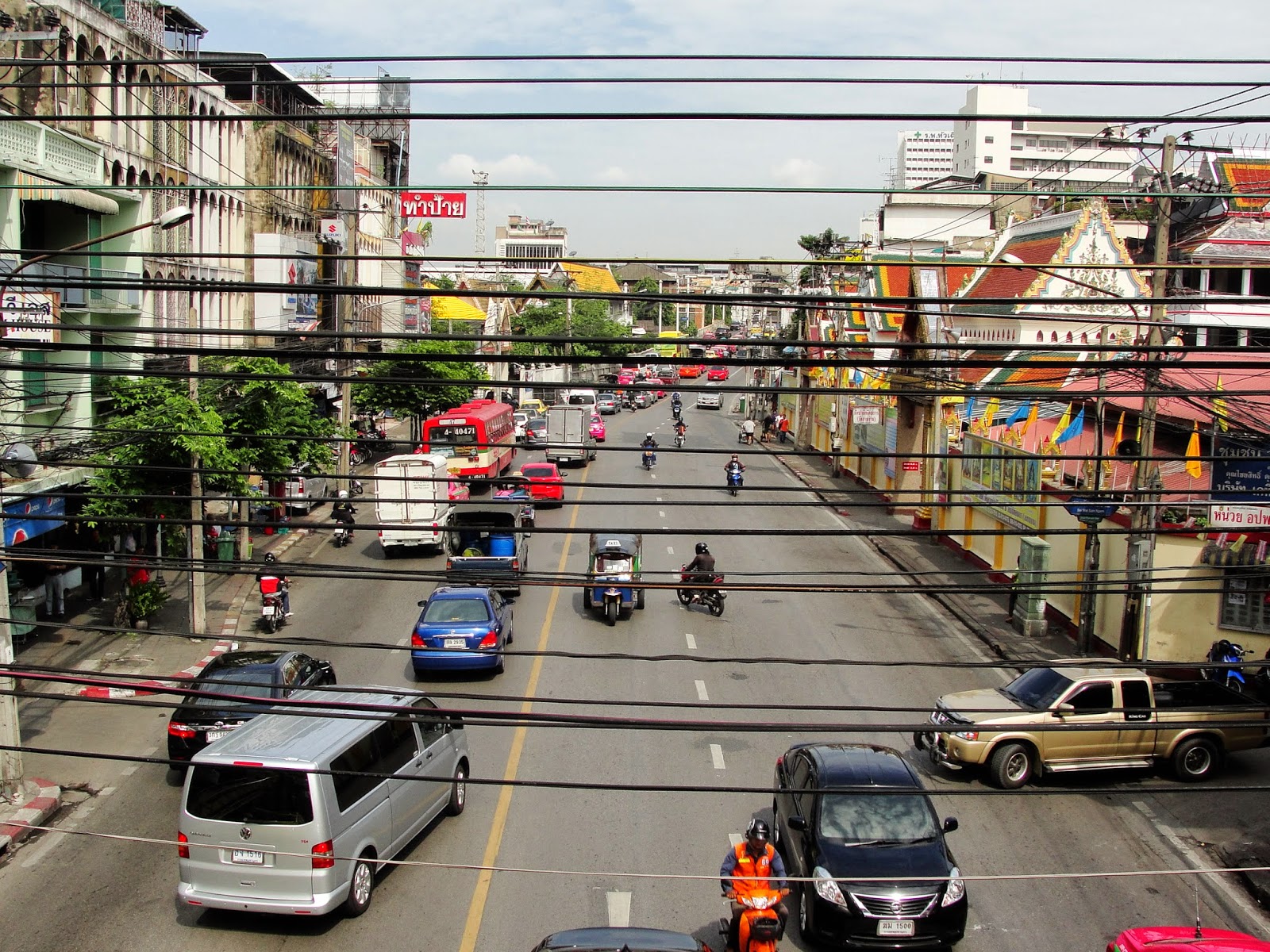 We only saw a tiny little corner of the city during our stay. The public transit system is pretty good but we mostly walked or took the boat taxis up the river, which limited our exposure to the central and western parts of town. That was probably plenty for our first visit. 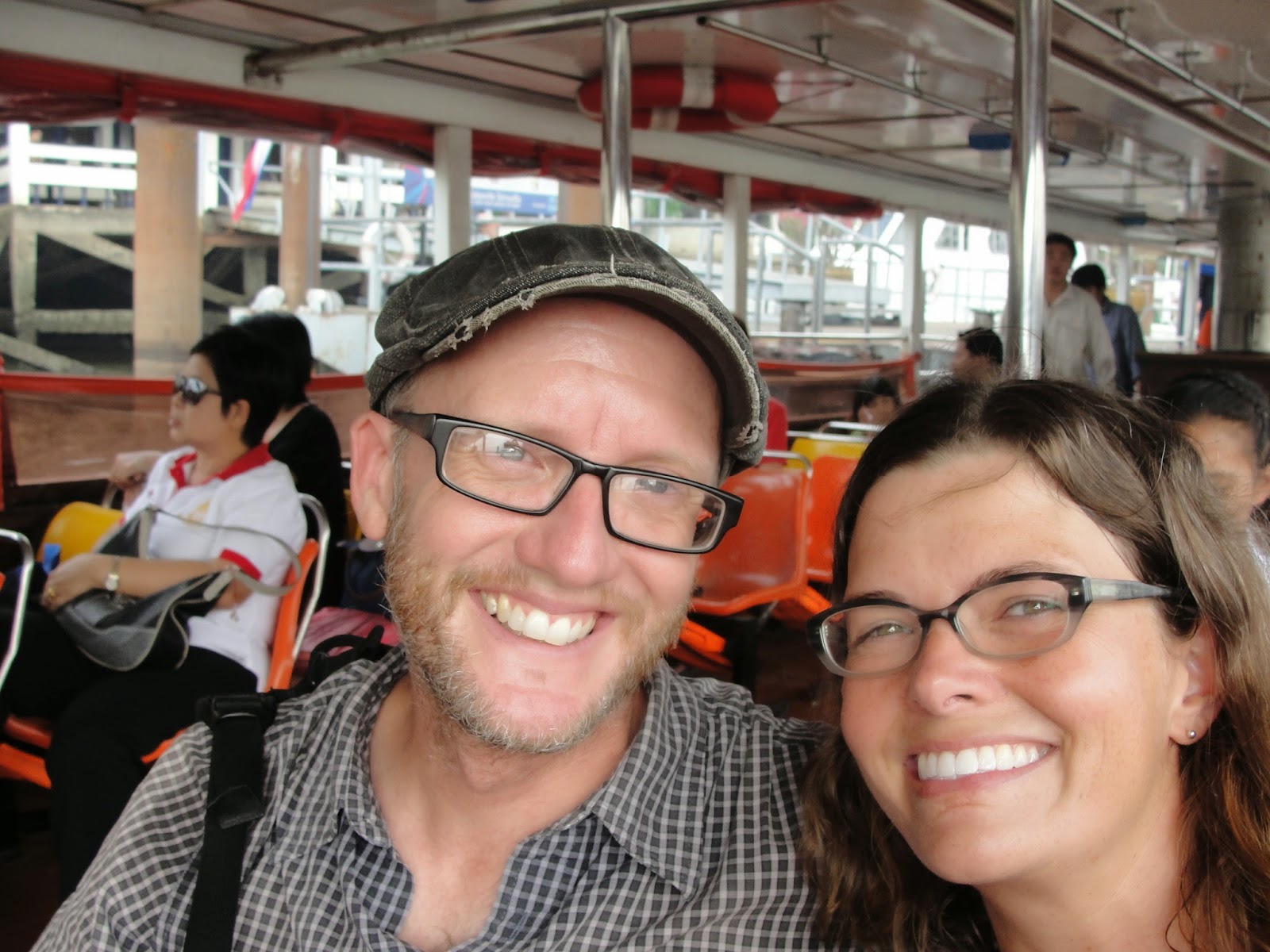 the boat taxis are really efficient
(and pretty cheap too!)

When we weren't taking care of a little business (trading books for new books, trading baht for US dollars) we explored a bit. For example, we spent just enough time in the tourist-centric Khao San/Banglamphu area to know that we didn't need to spend any more time there.

Here are five other things we did over four days in Bangkok, in no particular order...

We went to the malls. This was certainly not in the plan, but we purchased our bus tickets to Siem Reap online and had to go to a TicketMaster-like outlet in one of the malls to pick them up. Siam Paragon and Siam Discovery were enormous... as was the concrete jungle getting there. 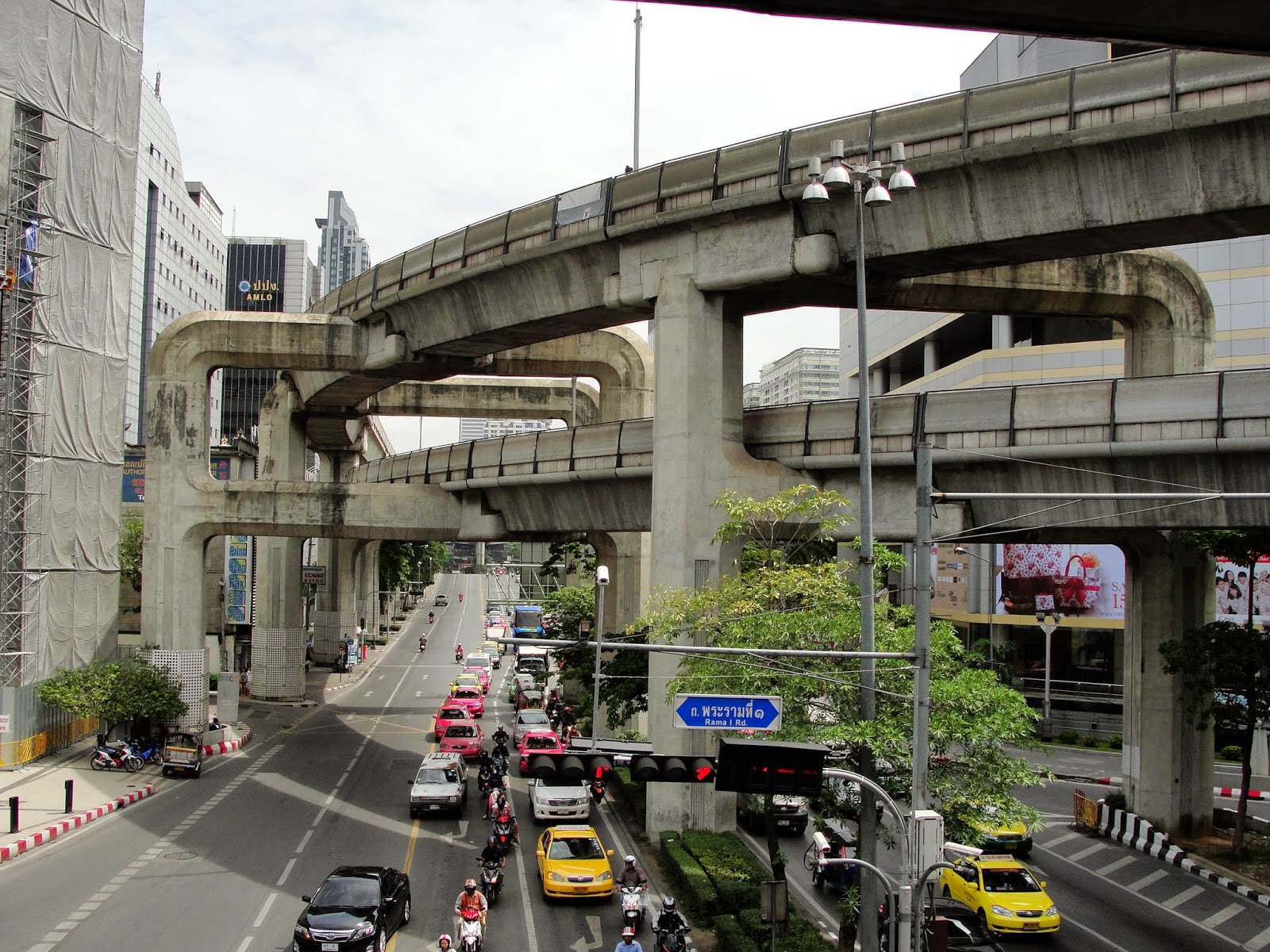 reminiscent of the Macarthur Maze in Oakland 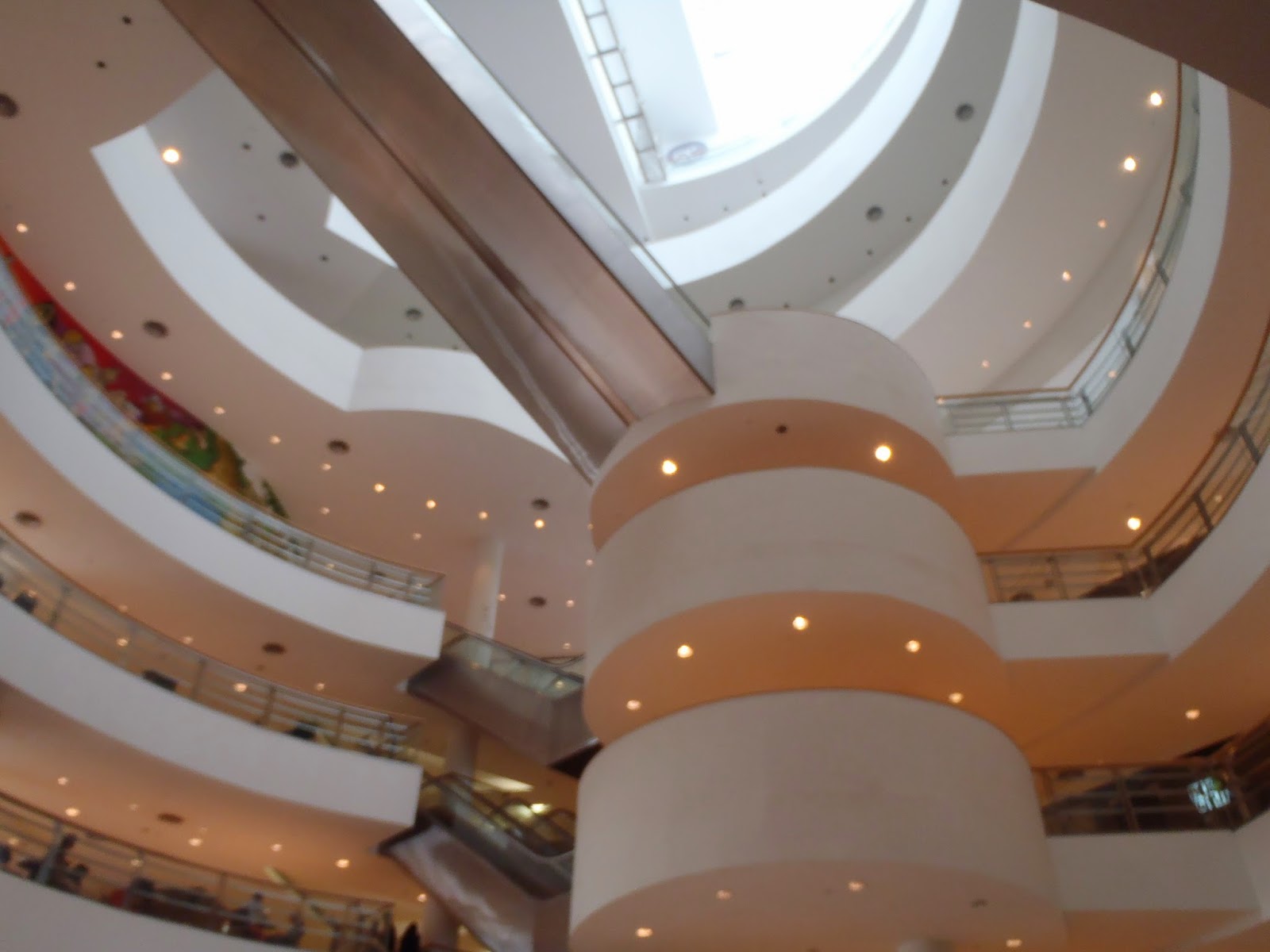 The malls were also air-conditioned, and they had a giant cinema complex with posters of movies we'd never heard of, so we spent more time in them than we expected. (Do you know how long it's been since we've seen a movie? We didn't give in - none of the films seemed worth the $7 price of admission - but it sure was tempting and we had fun looking at the posters. One of them even had a Sizzler with a $6 all-you-can-eat green salad bar... again, so tempting.)

We went to Chinatown. We were looking for a pair of cheap flip-flops (no luck - it's all wholesale here) and good food (mediocre luck - see below). 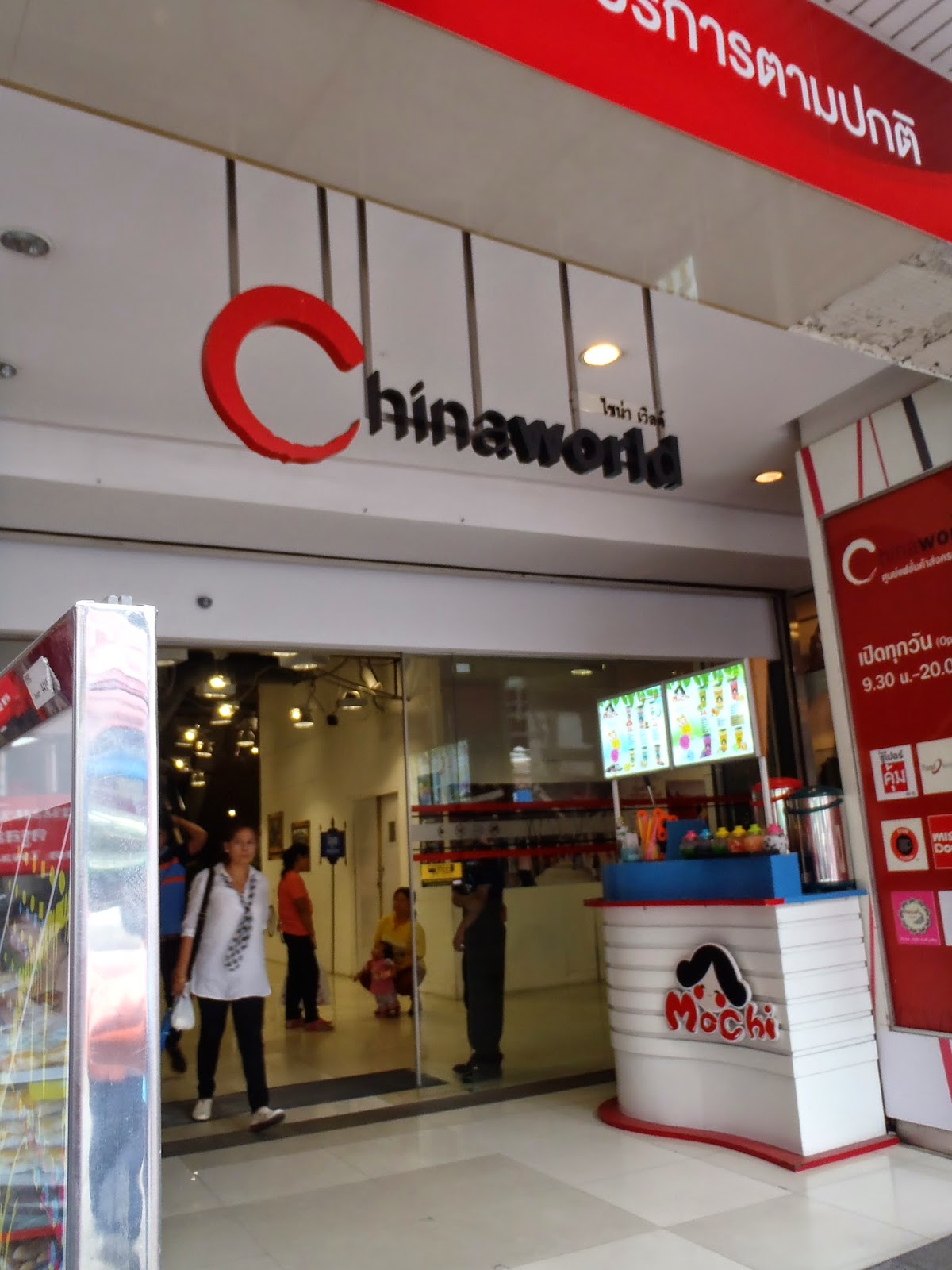 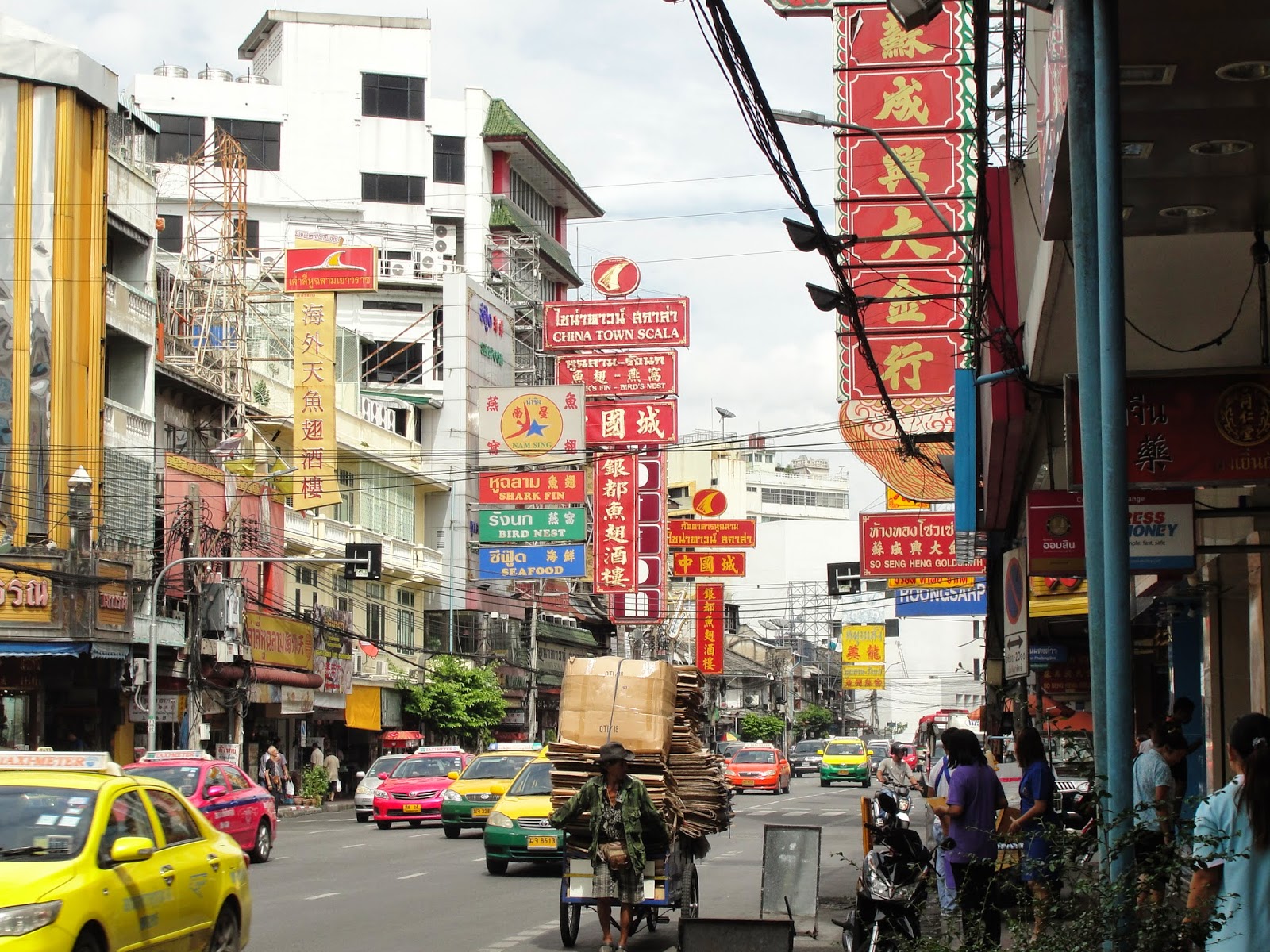 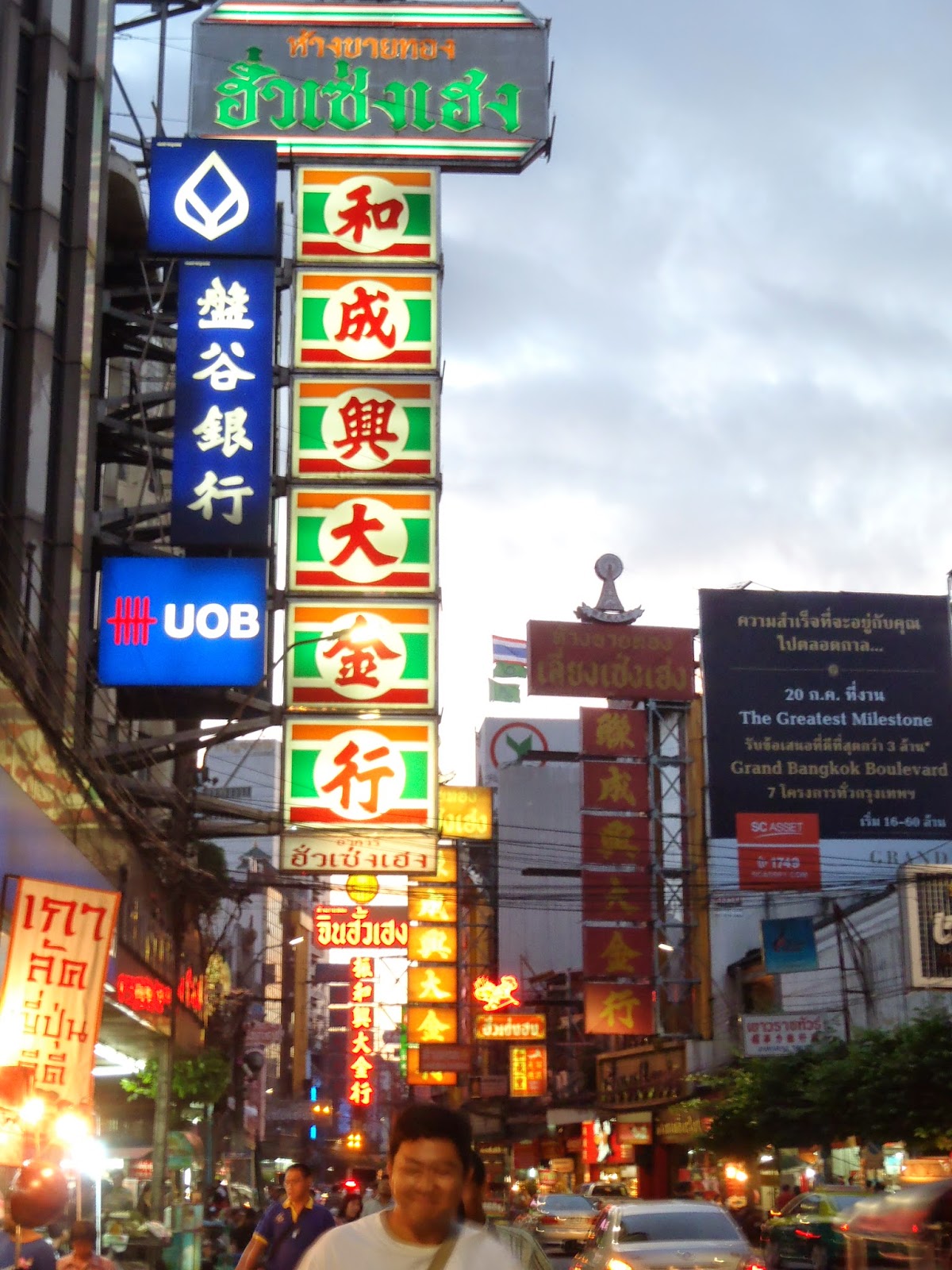 Still, we had a fun afternoon wandering around tiny streets with shops and street stalls jam-packed with merchandise. The indoor strip mall reminded us of the medinas in Morocco (minus the donkeys); the streets outside felt like any major US city's Chinatown (only bigger, and more authentic of course). 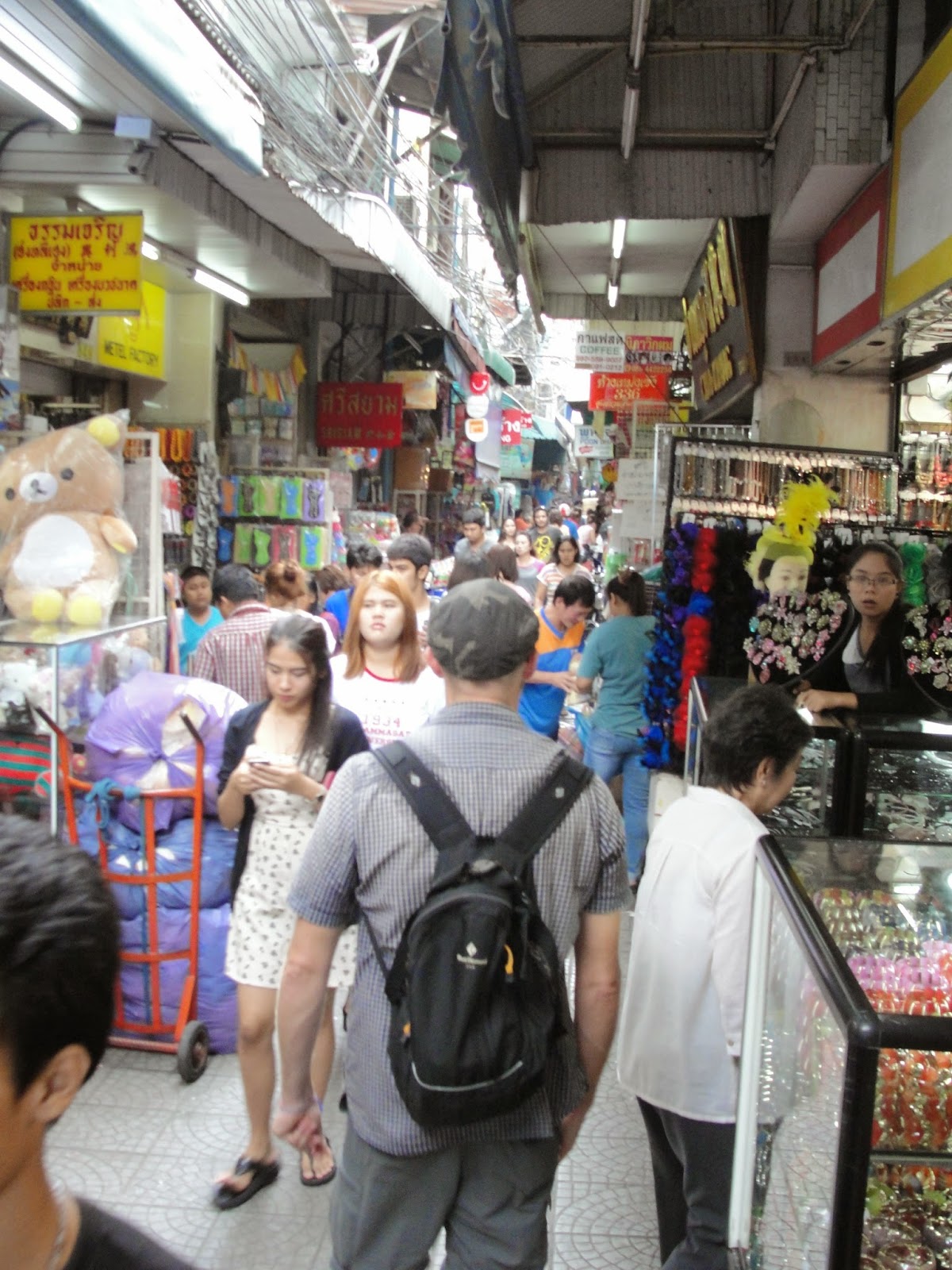 We also ran across the ginormous flower mart which apparently smells heavenly late at night when the shipments come in... 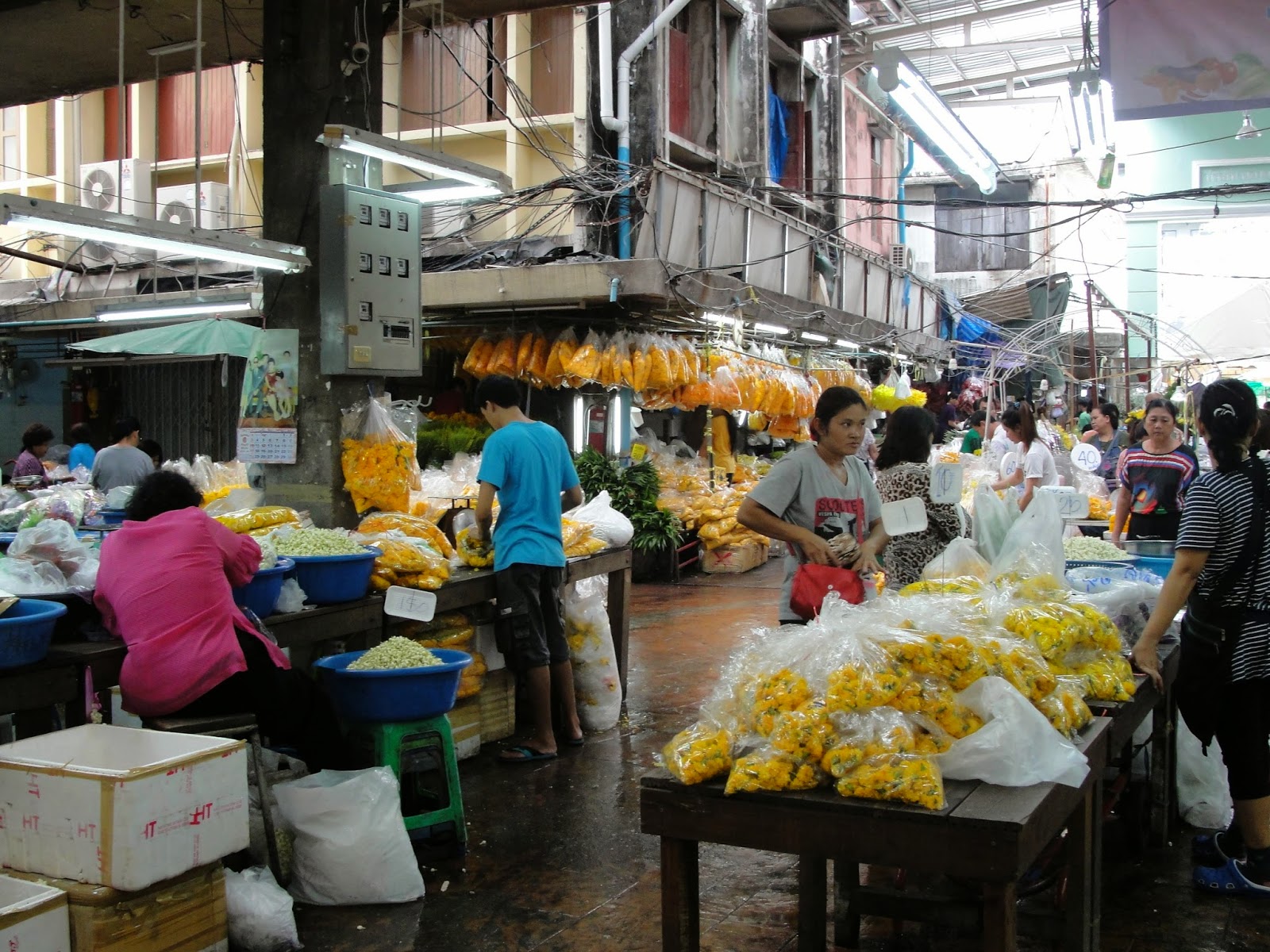 it smelled pretty good around 2pm too

(Some of the city tours will take you there at night, so definitely check it out if that's your thing.)

We saw a wat. Yes, just one. By Bangkok we were a bit watted out and really wanted to save our wat-energy for Angkor in a few days, so we skipped Wat Pho (we did peek in to see the reclining Buddha but skipped the 100b entry fee - we've seen enough free reclining Buddhas lately). And we only saw Wat Arun and Wat Phra Kaeo from a distance. Maybe next time. 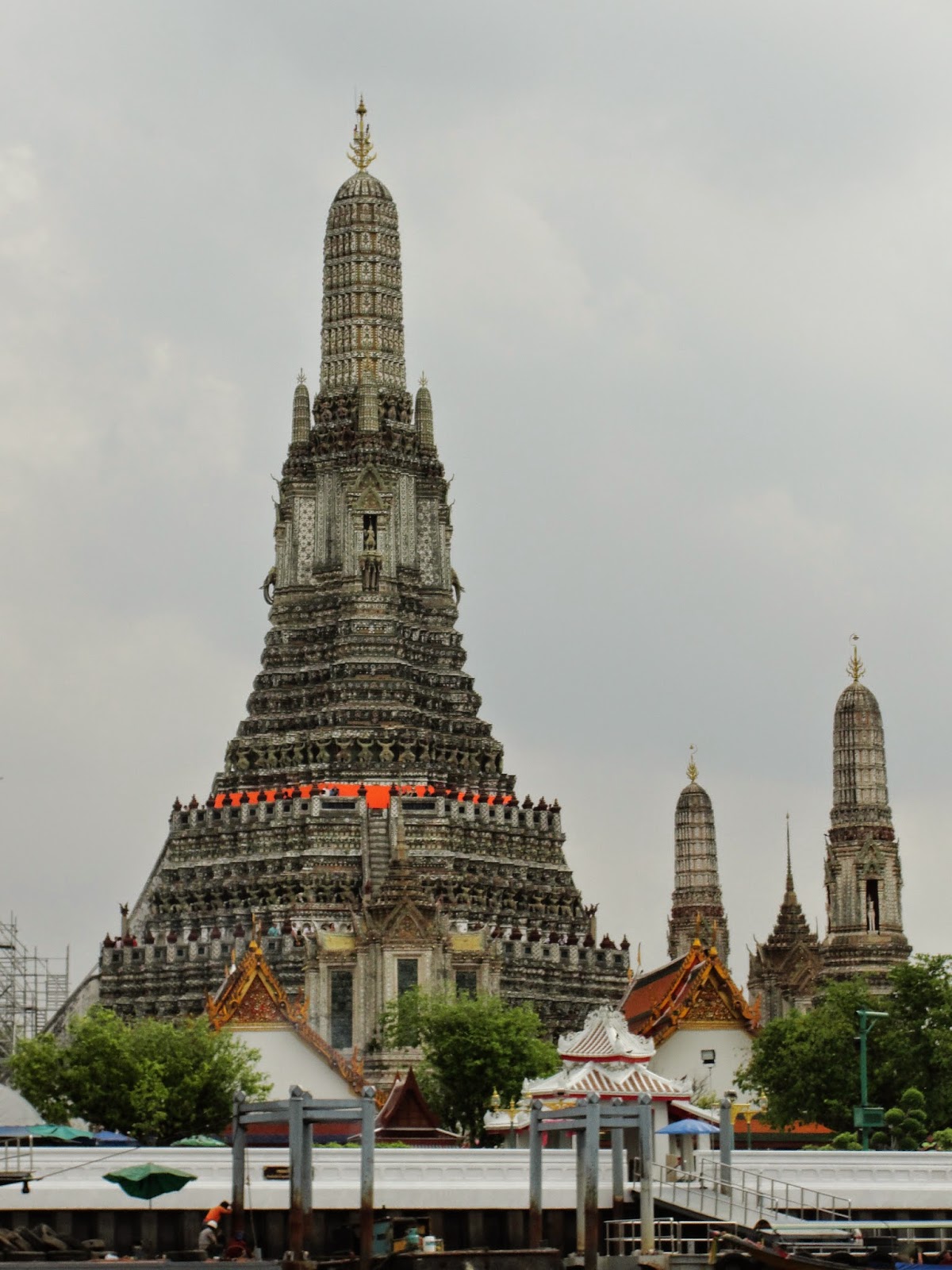 Wat Arun from the ferry taxi

Wat Phra Kaeo from the giant field it faces

But walking past Wat Rajabophit we couldn't help but detour inside to look around. It was massive, and so elaborately decorated! 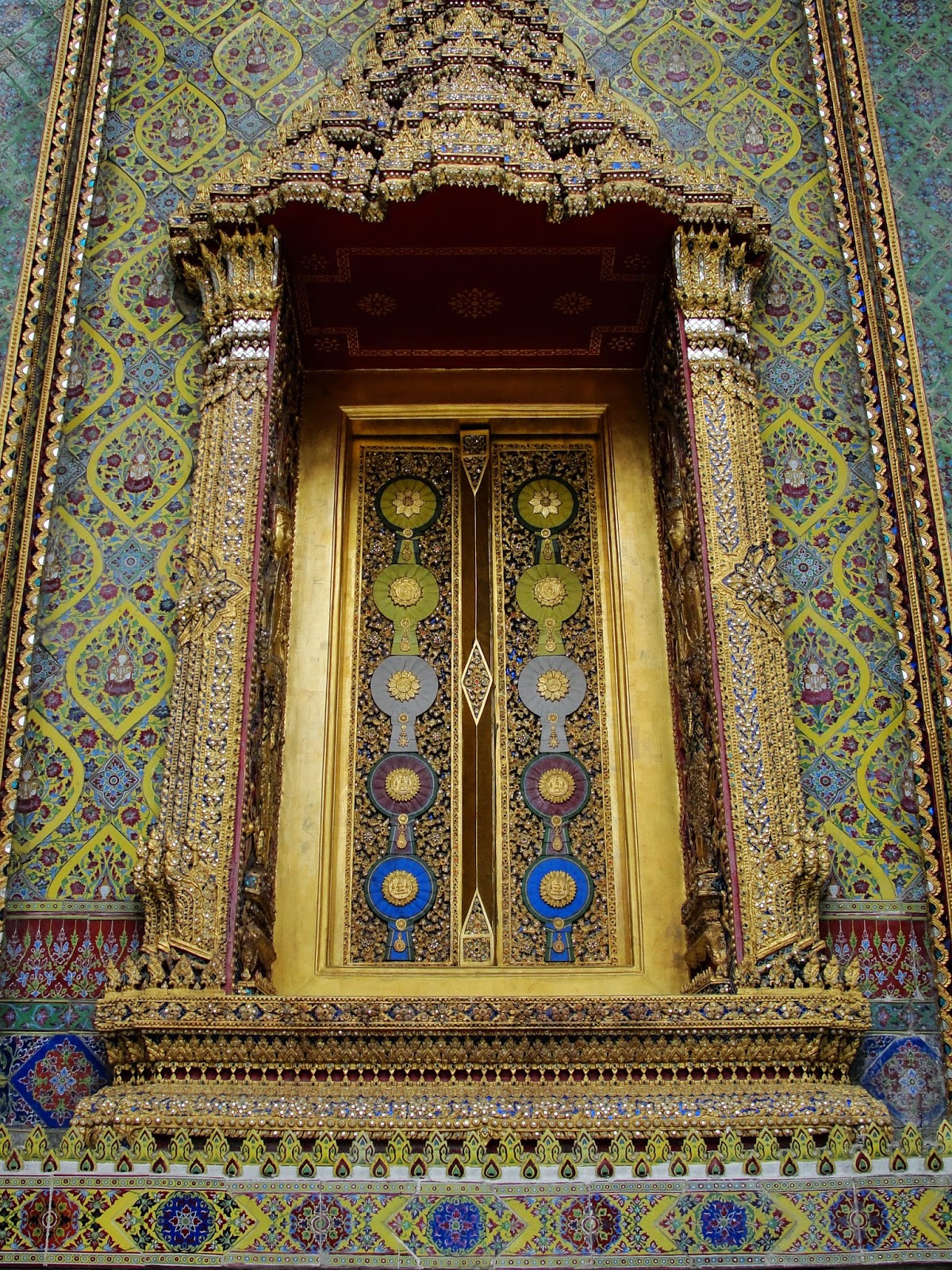 It would be interesting to compare and contrast all the different wat styles that we've seen in Lao and Thailand... We'll save that thesis for another time though.

We got our museum fix. Well, our free museum fix, that is. Bangkok's Art and Culture Centre was free all day. Exhibits included a great photography exhibit on Turkey (how fun to recognize so many places in the photographs!) and a really neat youth student sculpture exhibit. 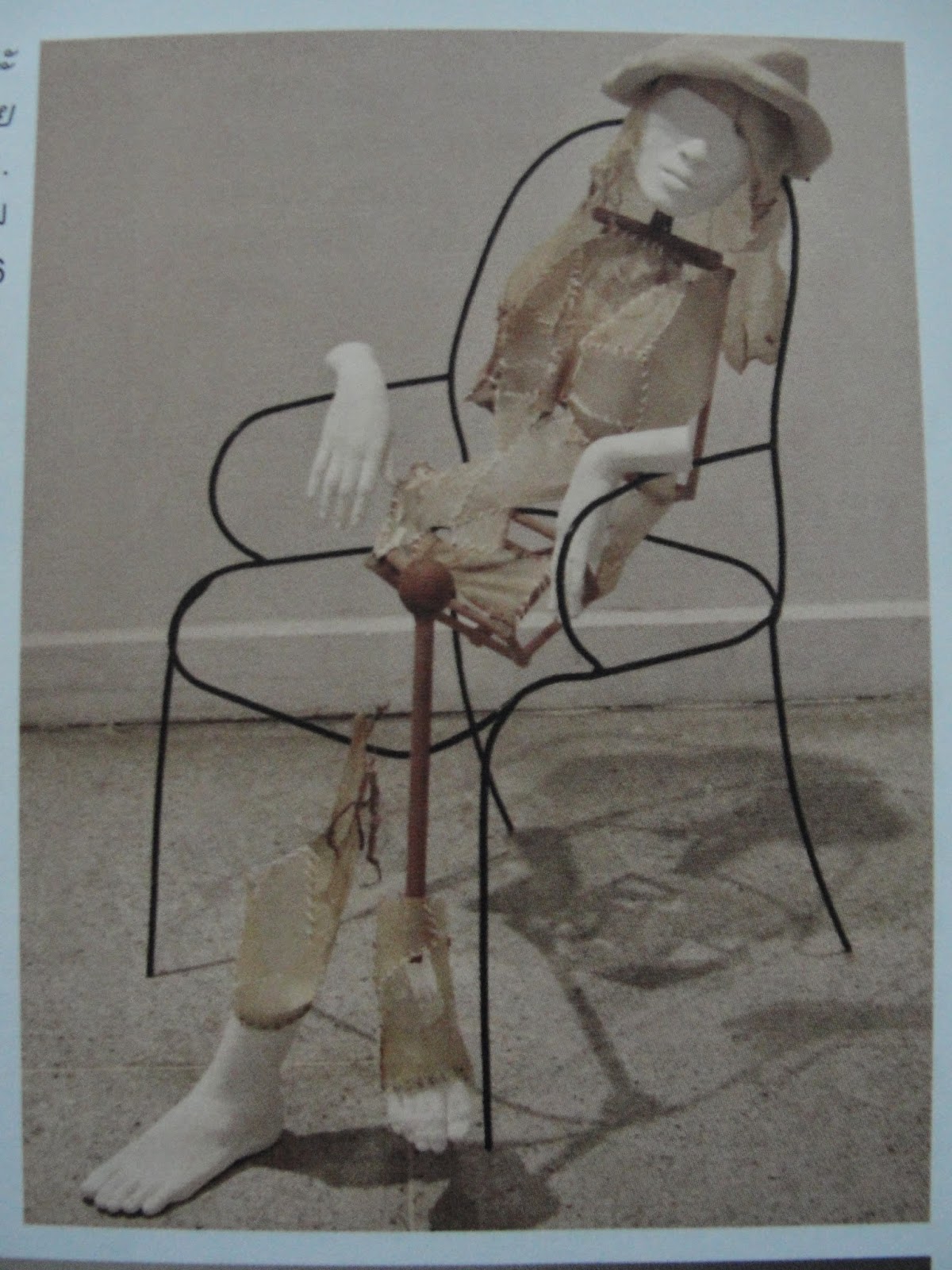 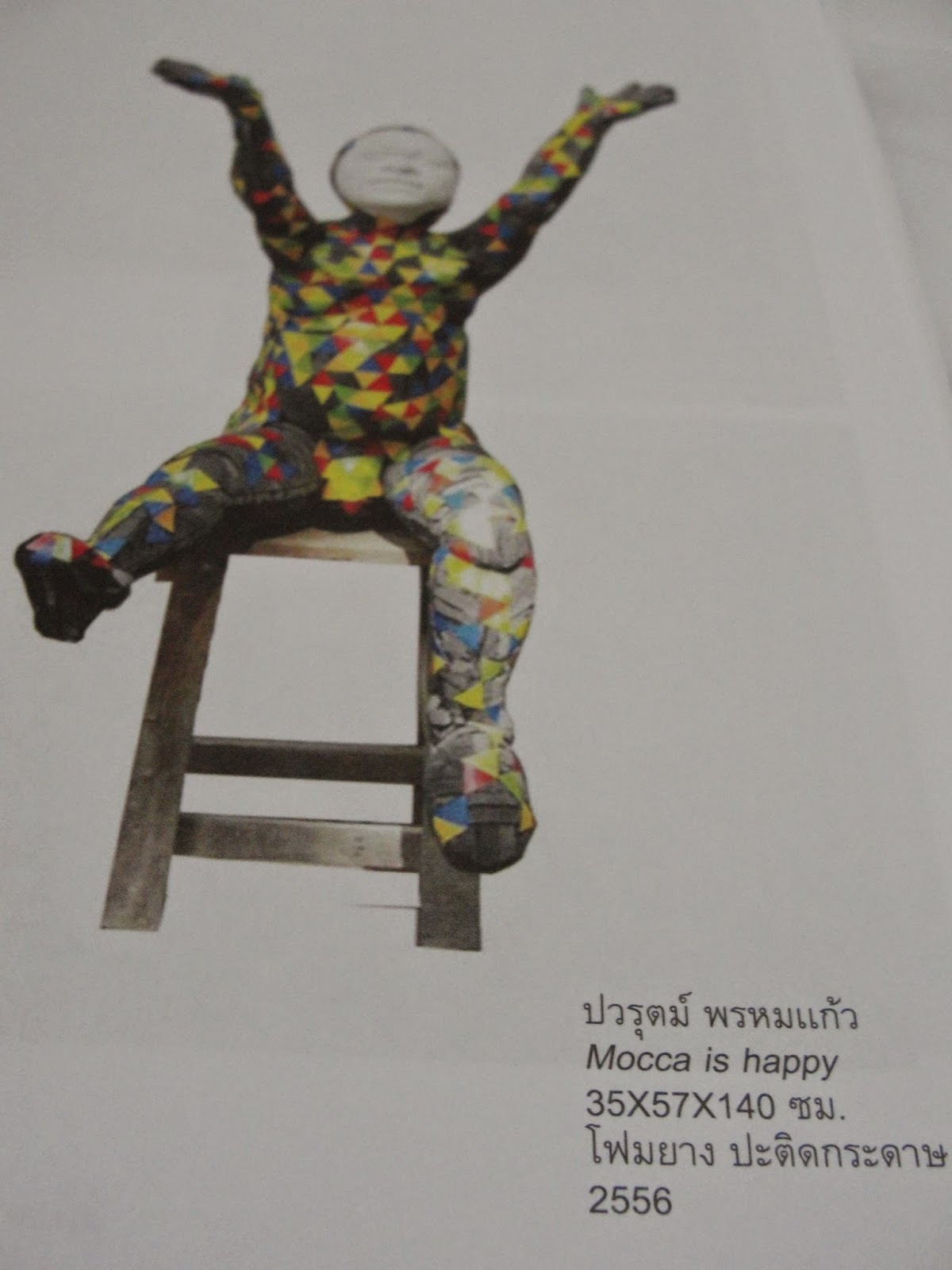 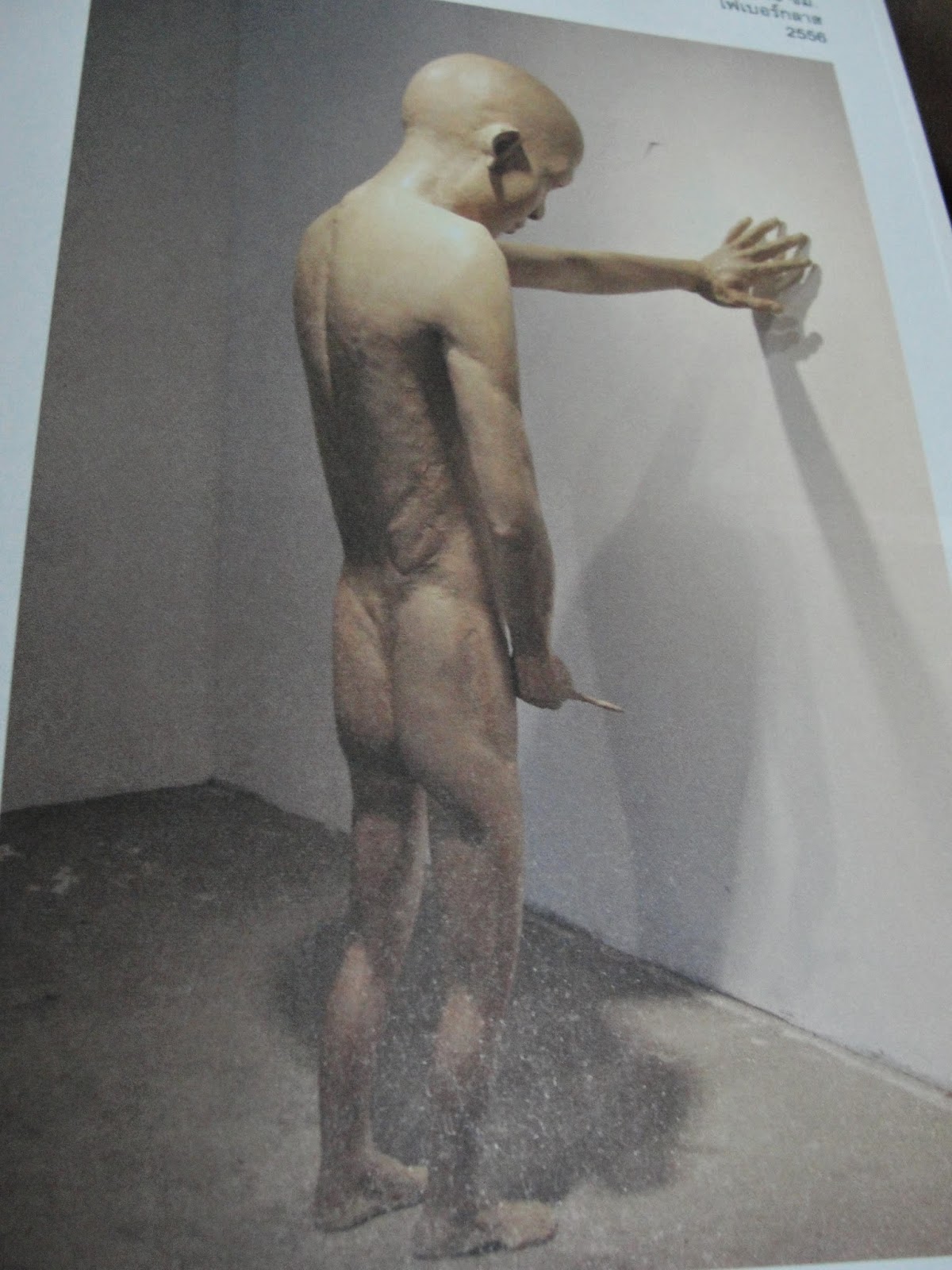 favorite sculpture #3
("why not?" - it's a knife, and he's looking at you
menacingly from the corner of his eye)

We were given pamphlets with photographs of the art and contact info of the artists, so we were able to email the kids who did the sculptures above to tell them how much we liked their work. Every museum should do that!

We also stopped by the Museum of Siam one afternoon - it's free after 4pm. Lots and lots (and lots) of Thai history followed by a few exhibits on more recent events, like a 1965 video of the Thai woman who won Miss Universe that year. Totally random and a nice break from the history lessons.

We sat in Lumphini Park and watched a couple of monitor lizards by the lake. 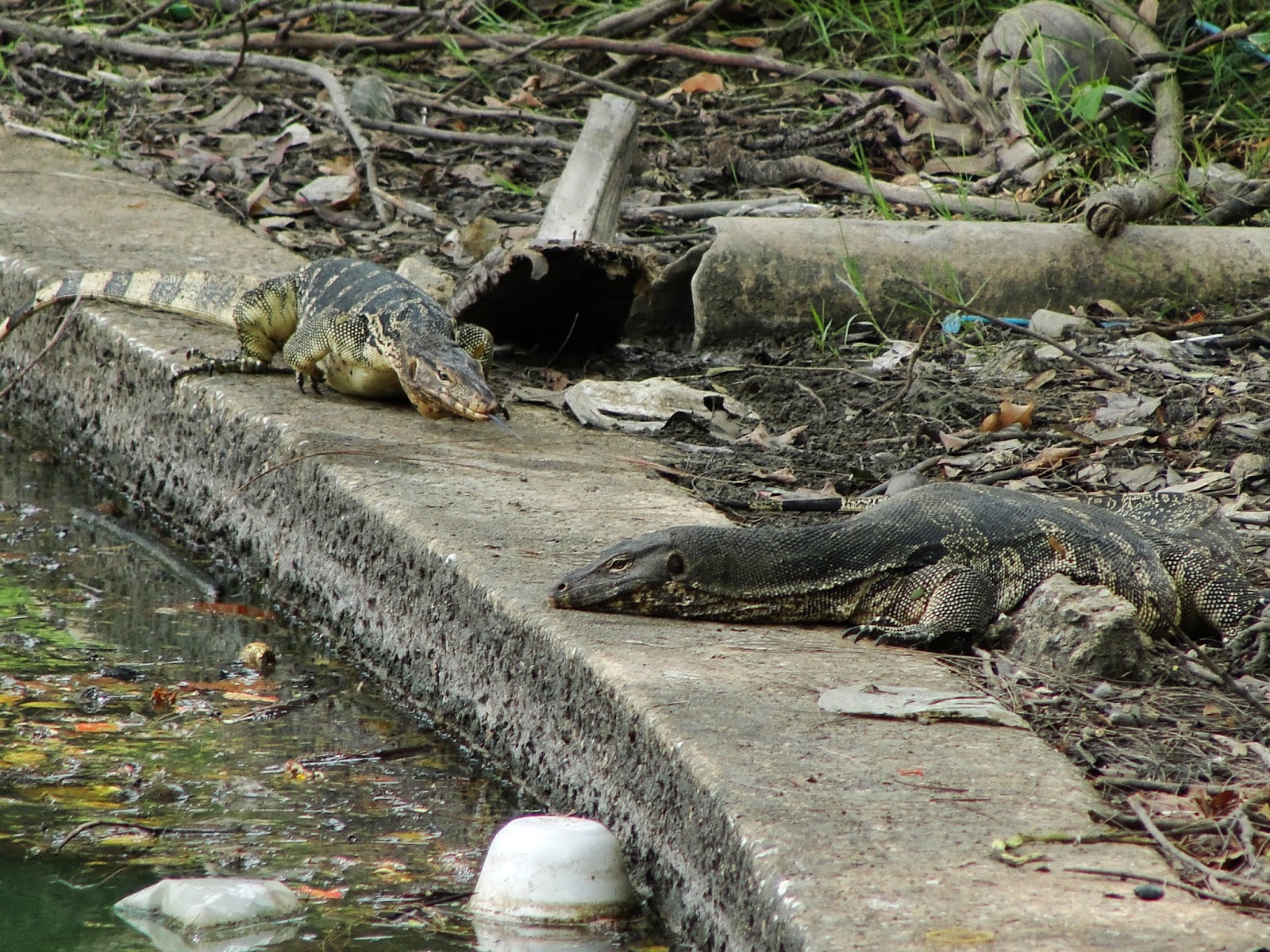 Yep, that's really all we did in Lumphini Park.

Big wats, big malls, big lizards - everything in Bangkok is big. Super-sized, almost. We missed the famous weekend market but we hear that's ginormous too. Leaving Friday morning we saw a great big side of the city that included heaps of traffic, sprawl, and concrete. (We had lots of time to enjoy this view while our local bus sat in an hour of traffic en route to the bus station... usually we arrive at the station hours before the bus is scheduled to depart. This time we had a whopping 2 minutes to spare.) But that's city life for you. 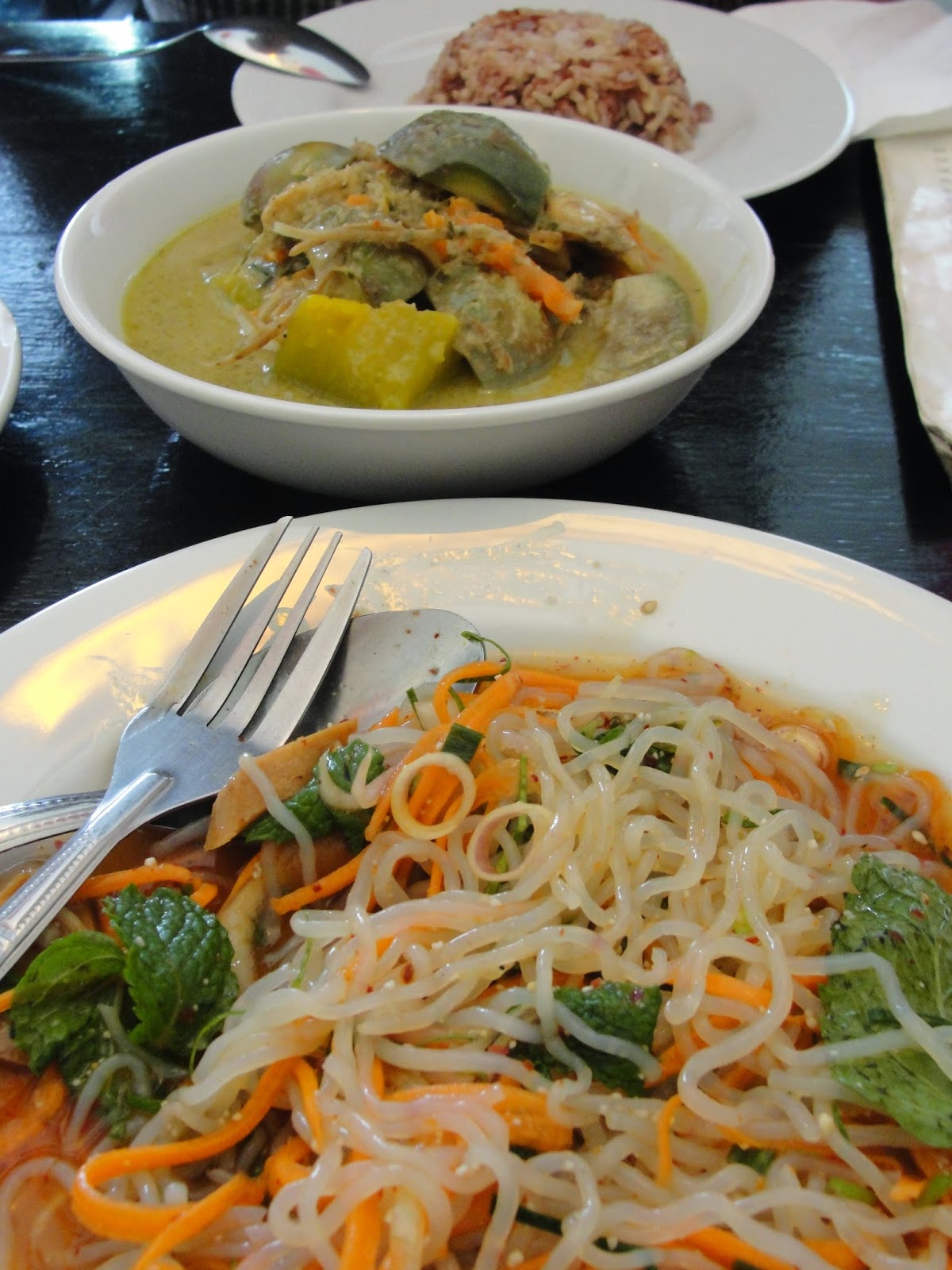 yam noodle stir fry for her,
green curry for him 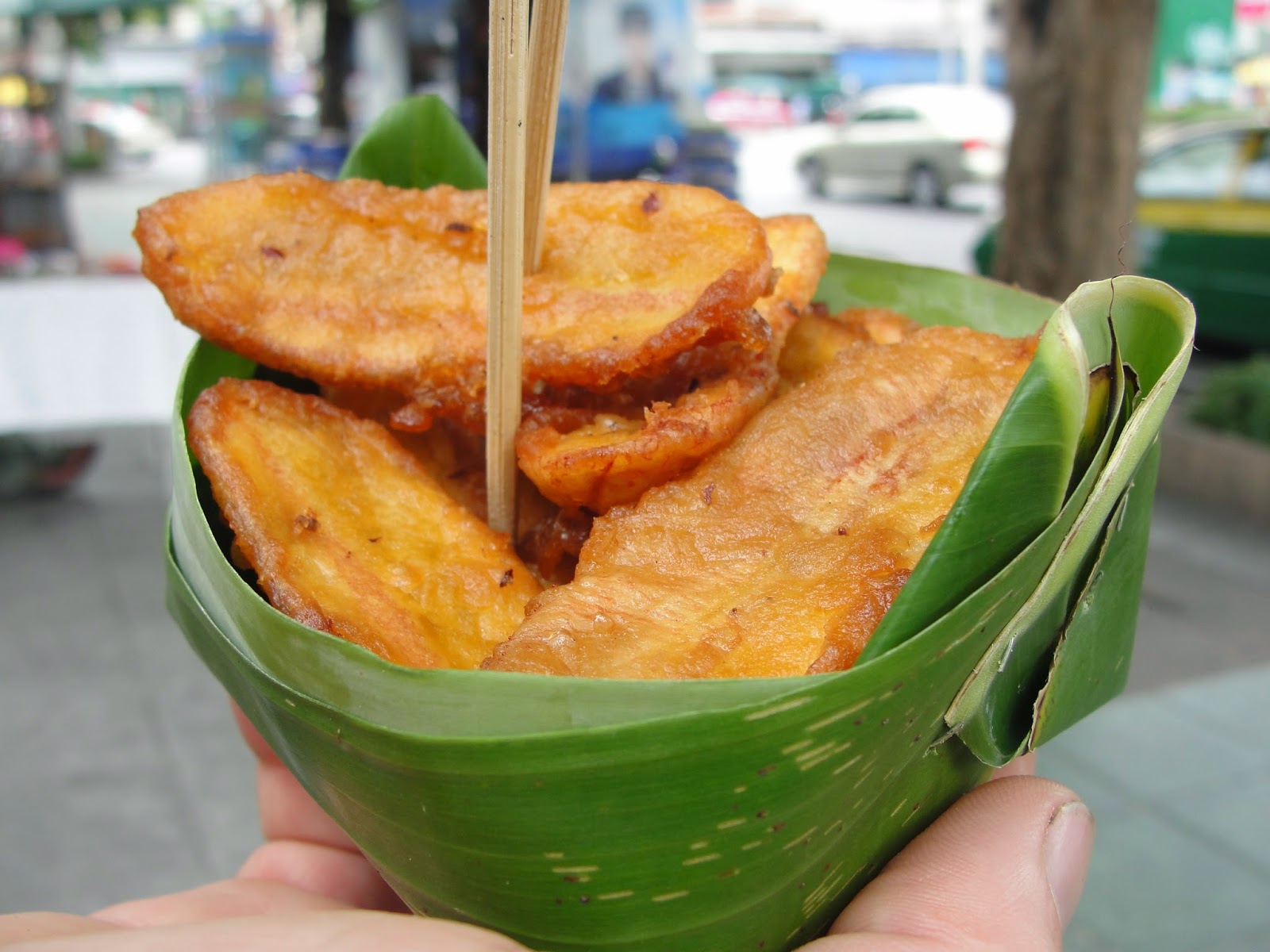 (at least we think so) 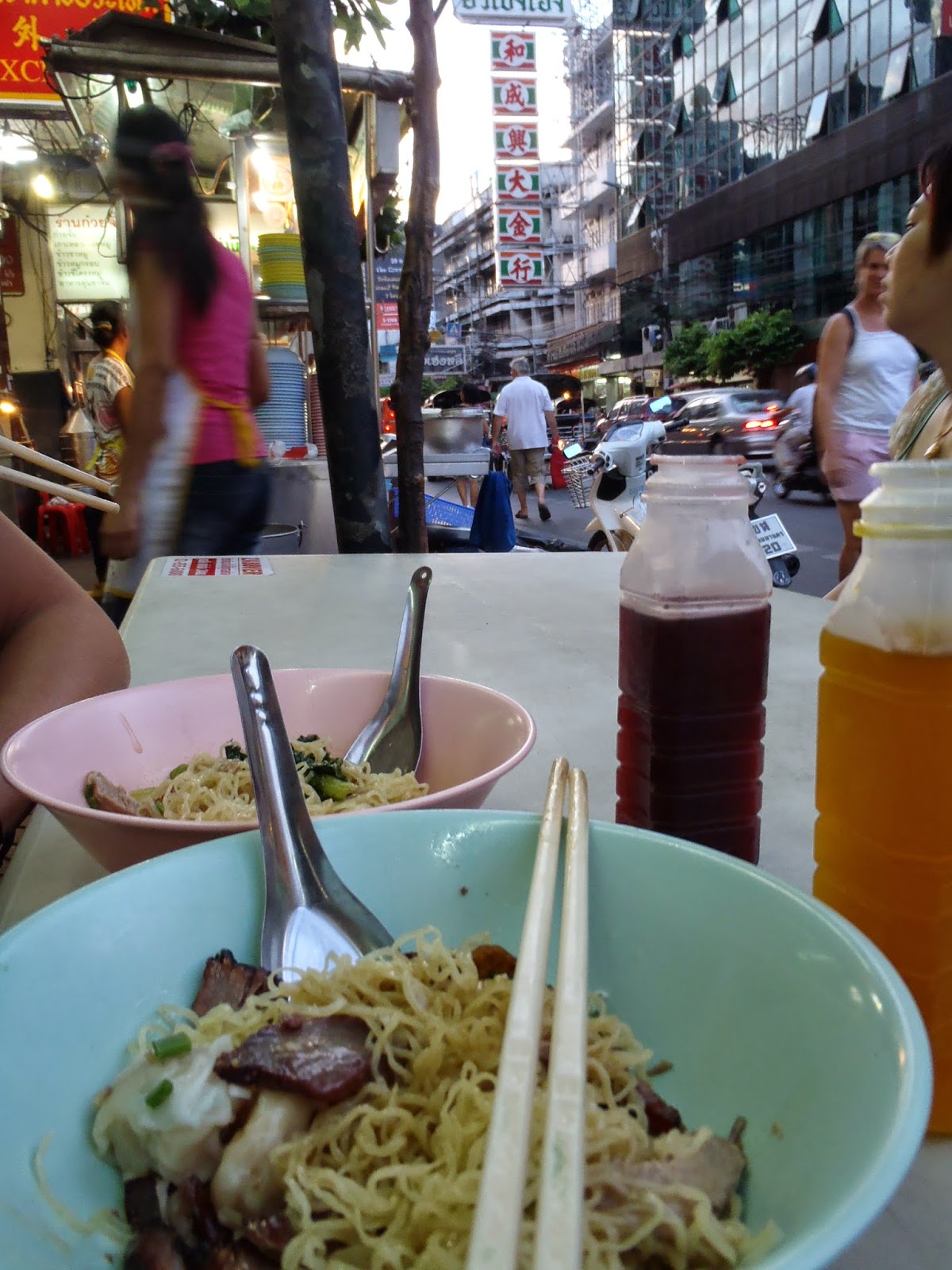 duck with a tiny amount of noodles, 70 baht 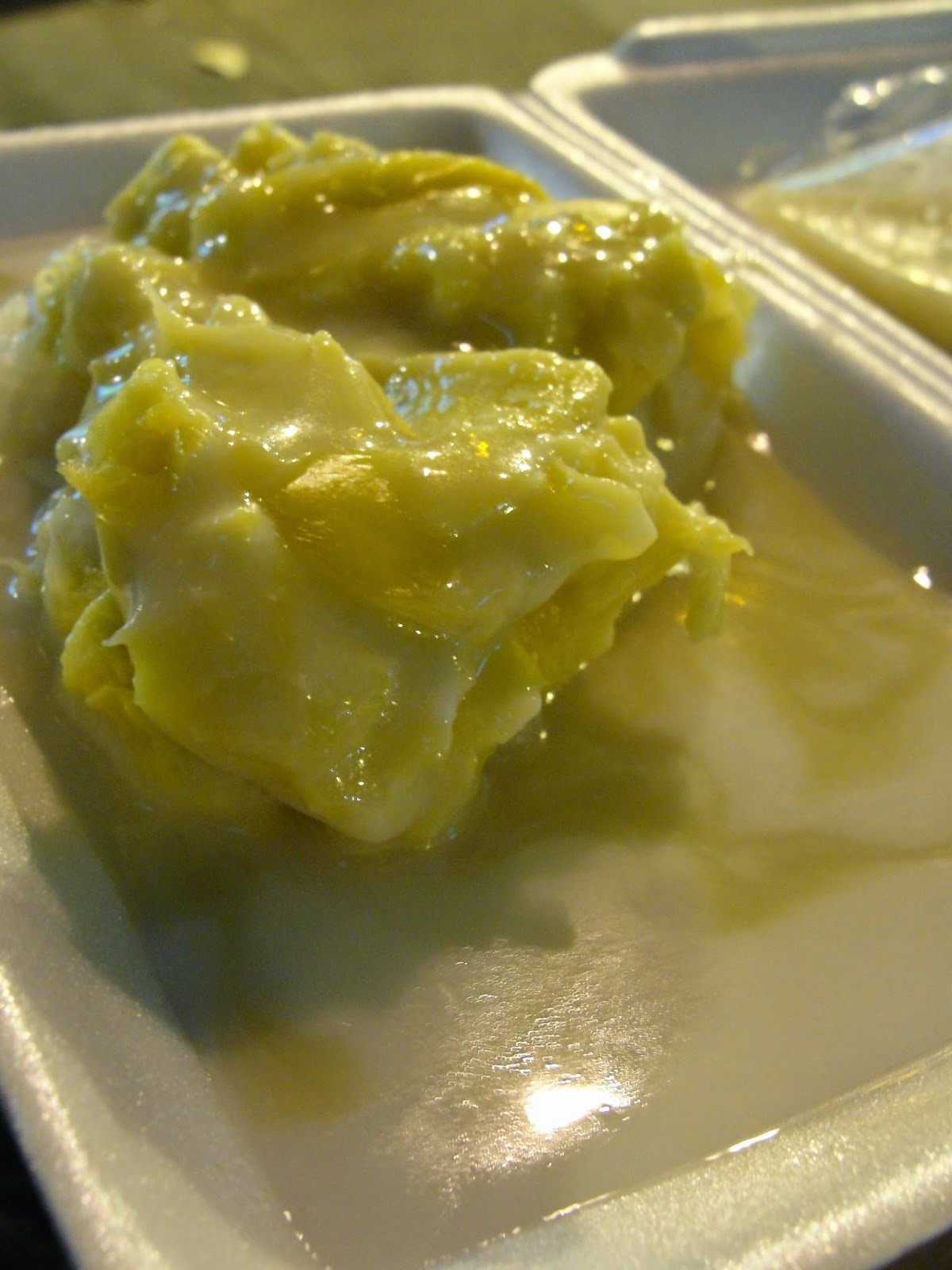 Patrick's favorite fruit that Jen won't miss at all

Lodging notes: we stayed at Lucky House. Not sure how lucky it was. It was small and clean-ish, though, and it had air conditioning for just a fraction more than we'd been paying for fan rooms. We got really spoiled with that air conditioning.

We got really spoiled in Thailand in general, honestly. We'll miss certain things about it but we're ready for the next phase of this journey... bumpy dirt roads, expensive food, and all. To Cambodia!
Posted by Slowly Global
Email ThisBlogThis!Share to TwitterShare to FacebookShare to Pinterest
Labels: asia, thailand