Putting the "bat" in Battambang (and some deeper thoughts too).

One 11-hour bus ride later (our last? we hope!) we arrived at the Battambang bus station 3km outside of town... in the dark. Luckily, our bus company offered a free shuttle to our hotel.

That didn't stop a dozen tuk-tuk drivers from aggressively accosting us as we got off the bus. And unlike in Kep, these guys were relentless throughout our stay. We couldn't walk a block without being approached; a few even followed us for a half-minute after we insisted we didn't need a driver, in case we suddenly changed our mind. A sign of the economic situation in this part of the country...?

Anyway. We saw a very cool thing in Battambang. There is a cave where hundreds of thousands of small bats exit every night to feed. 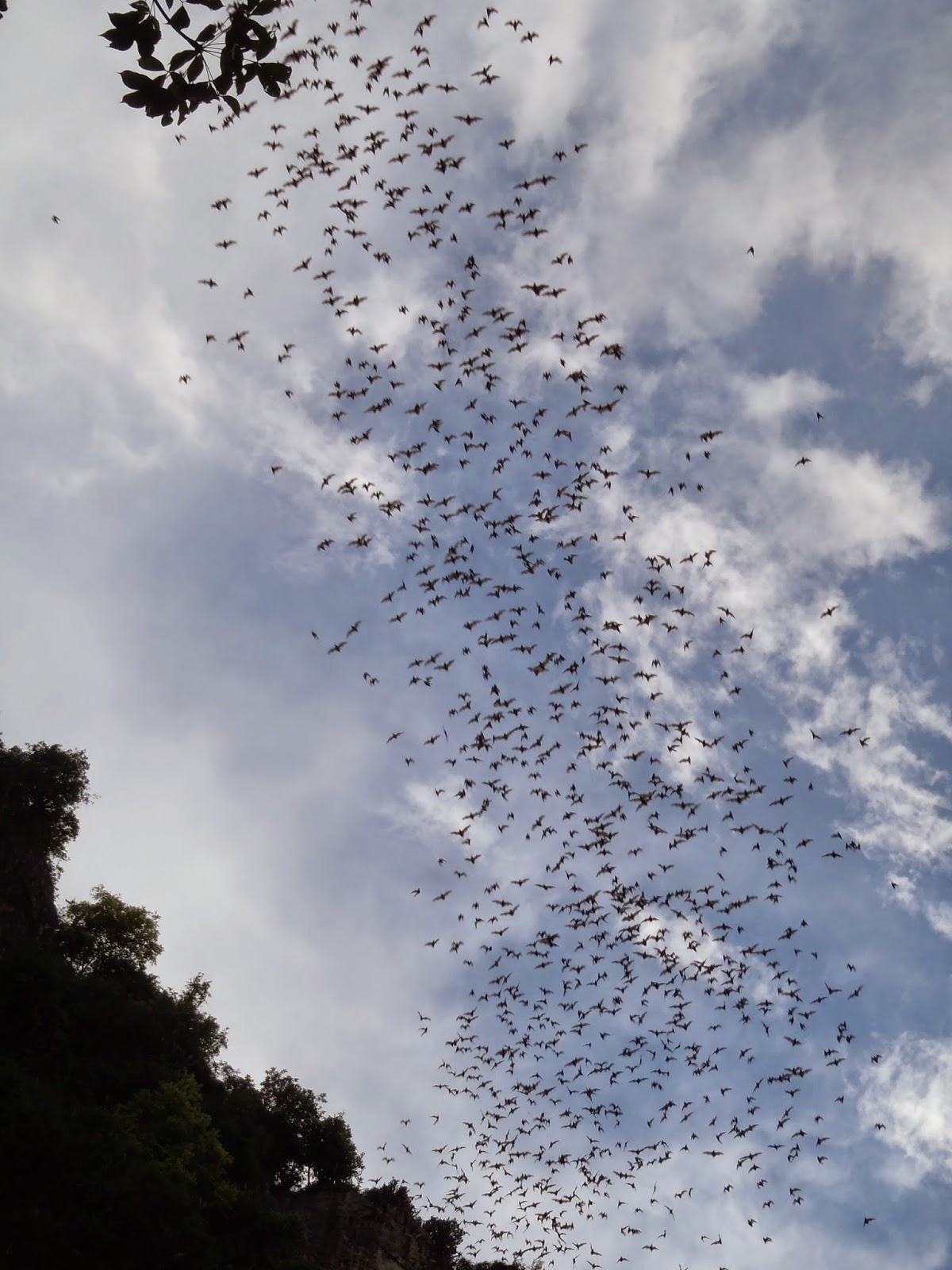 like Portland's Vaux's swifts show -
only longer, and with bats

They leave in a really organized formation but they scatter when one of the locals makes a "tssss!" noise. 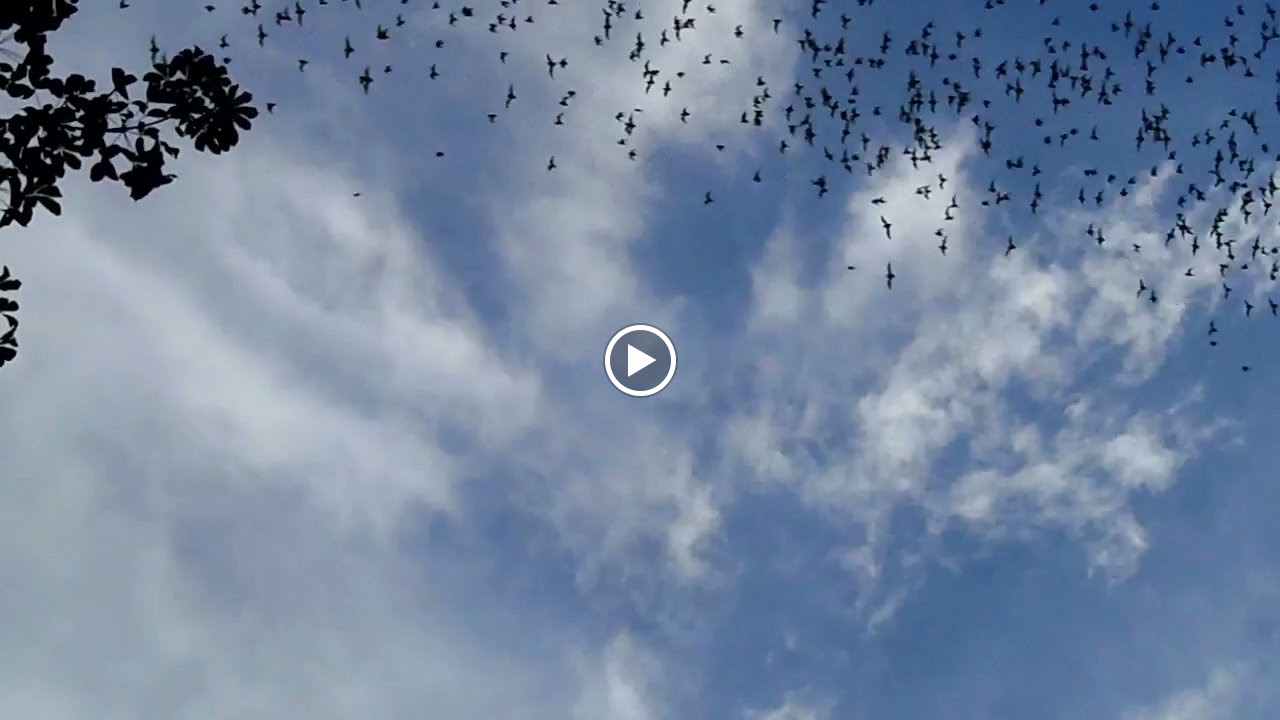 They make a trail in the sky as they cross the field. Patterns form as they swoop and soar. 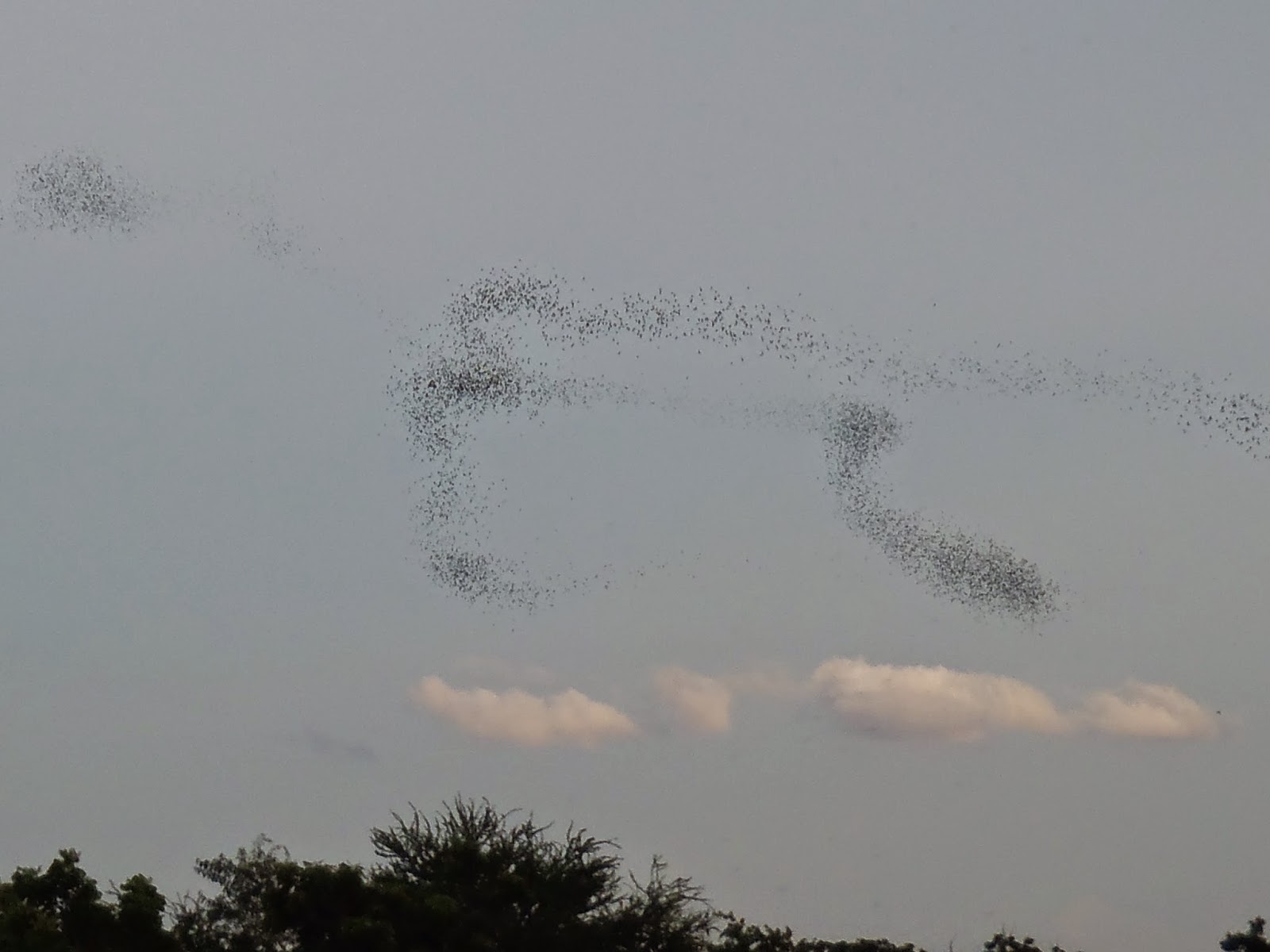 form of: stick figure on its side!

It goes on for about an hour; we saw about 25 minutes of the show before the bat line disappeared into the sky.

It was pretty magical.

The "bat cave" is near Phnom Sampeu, the "killing caves" where 10,000 Khmer were killed between 1975-1979. Tourists can easily combine an afternoon visit to Phnom Sampeu with an early evening bat viewing. We opted for just the bats - too emotionally spent for more Khmer Rouge history - but while we sat near the cave entrance waiting for the show, our (very nice, very friendly, very non-aggressive) tuk-tuk driver volunteered some information about that period of Cambodian history including his personal survival story and the challenges he faces today as a result. He didn't share his story because we asked - he was pretty clear that he was sharing his story because he wants to educate people about this time in Cambodia's history.

Our round-trip ride to the bat cave was $8. On the way back we had a quiet conversation about the ever-present question we've faced in SE Asia: to tip or not to tip? If we do tip, how much?

See, in some cultures it's insulting to tip. The price of service is the price of service, and locals see tipping as foreigners frivolously throwing money around. An $8 charge for a 90-minute "tour" (more like a ride) in this part of the world is pretty generous and the guesthouse that arranged it for us didn't seem to take a cut. We could tell from talking with our driver that he was obviously a proud man and we did not want to insult him.

On the other hand, in some cultures tips are expected when service is provided to foreigners (particularly Americans - we are one of the few cultures where tipping is expected for any and everything in our own country, service quality notwithstanding, and this expectation has unfortunately extended worldwide).

And on the third hand, this man had been through so much.  From his story we knew he wanted more for his life than to be a tuk-tuk driver. While Cambodian kids today have a better future, kids who survived the late '70s were robbed of educational opportunities and as adults today they seem to get little educational assistance from their government. And Cambodia has gotten little help from America over the years...

On the fourth hand (thank goodness there are two of us!) our fundamental stance on helping less fortunate people (at home or away from home) is that if you give to just one person you're not helping the root of the problem. You have no idea where that money is actually going to go, once it's in that person's hands. Ideally you give to quality NGOs that provide equal opportunity services to people in need. Less money filters down, but it filters down to more people.

We could tip, or we could ask for a ride to the boat station the next morning (literally a 10-minute walk from our hotel) and try to compensate him in that way.  In the end we made an exception to our usual rule. We used the "pay it forward" rationale, and when our driver dropped us at the night food stalls we gave him the money we saved when those awesome ladies bought us lunch in Phnom Penh. We told him it was for his daughter's schooling. He looked confused (or was it insulted? we'll never know) but he thanked us and drove away.

At the night food stalls we were approached by a steady stream of children begging for food or money. We refused them all, as our guts and the guidebooks have told us to do. Kids begging for money are less likely to go to school. This is not good.

But when an older disheveled woman approached and held her hand out Patrick slipped her some riel. Older people who survived the Khmer Rouge are less likely to get any support from anyone - internally or externally. This is also not good. The woman smiled, said a few sentences to me in Khmer, made a blessing-like gesture to him, and moved on.

And now we're on a bus to Bangkok with $2 in leftover riel between the two of us. We can't use it. Many of those tuk-tuk drivers probably could. That disheveled woman probably could. Those kids probably could too. In the grand scheme of things should you really have to decide exactly who to help, and exactly how to help? Shouldn't you just give if you have it and they need it? (And the truly burning question - do you really need to dump a bucket of ice water on your head in order to take action to help? But that's a question for another day.)

Anyway. There was a lot more to Battambang than the ramblings above suggest.  It had its statues, of course... 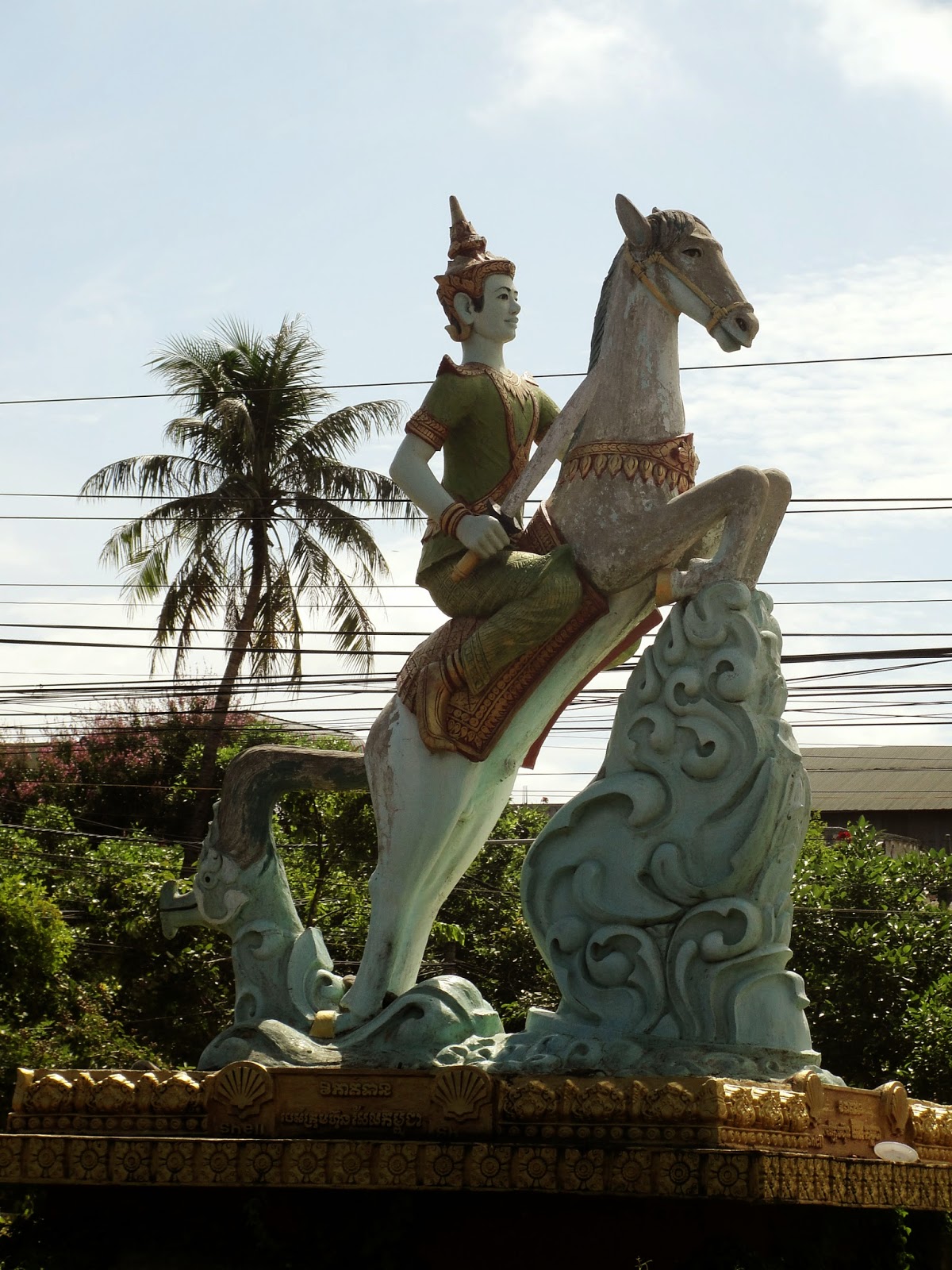 (this is the Flying Prince on a Horse) 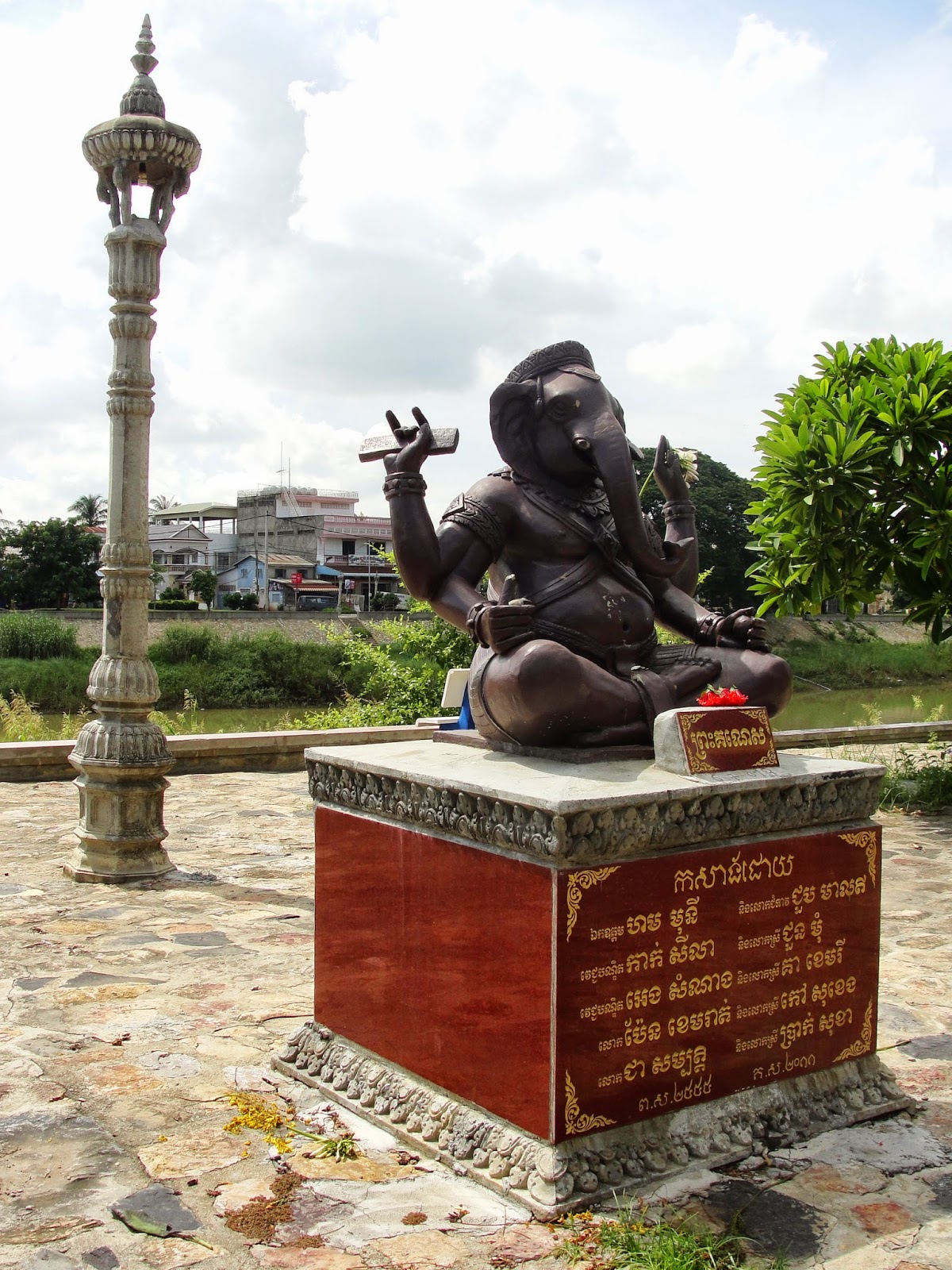 (some statues made more sense) 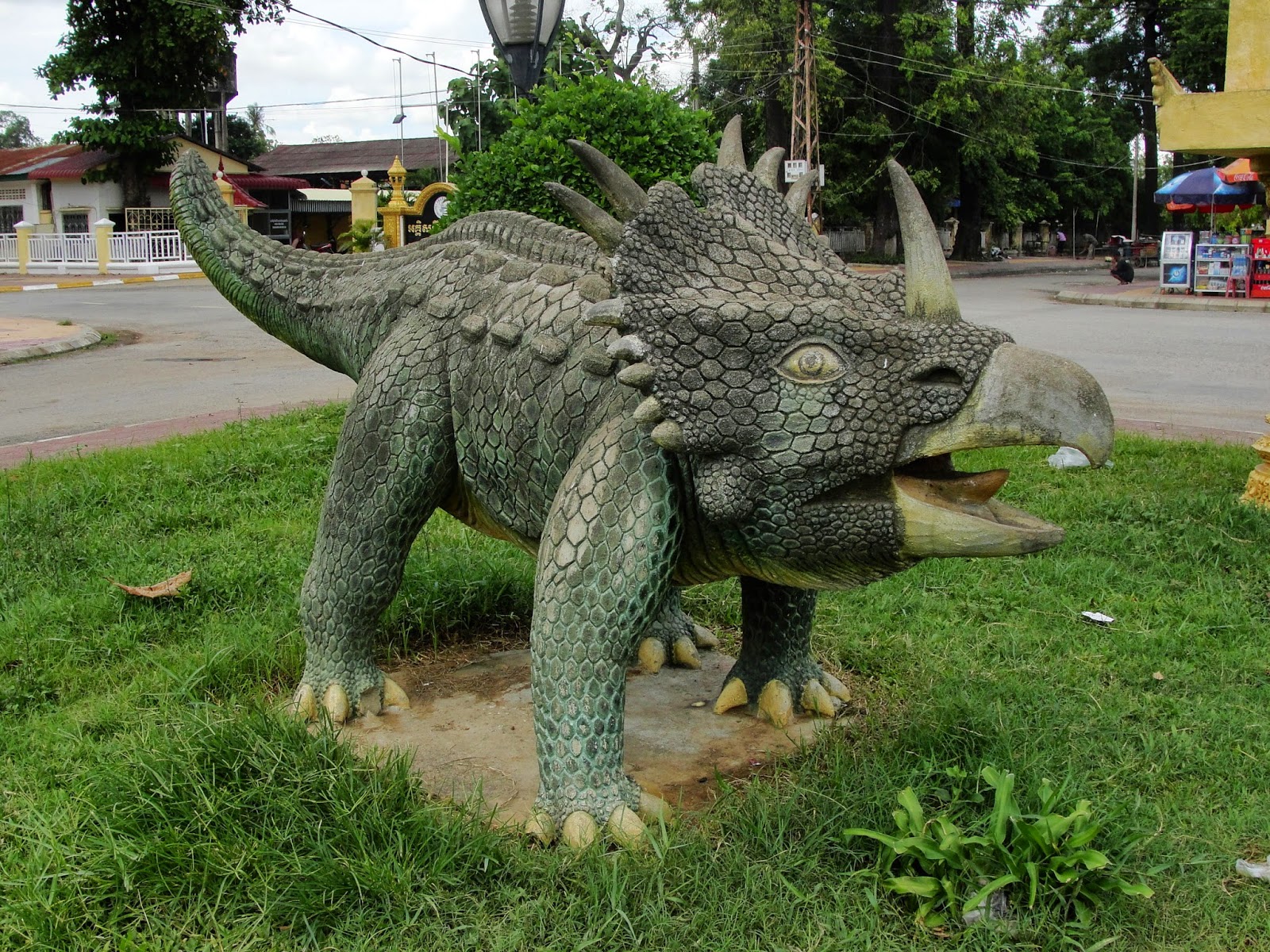 (some made less sense)


It had a nice river lined with benches... 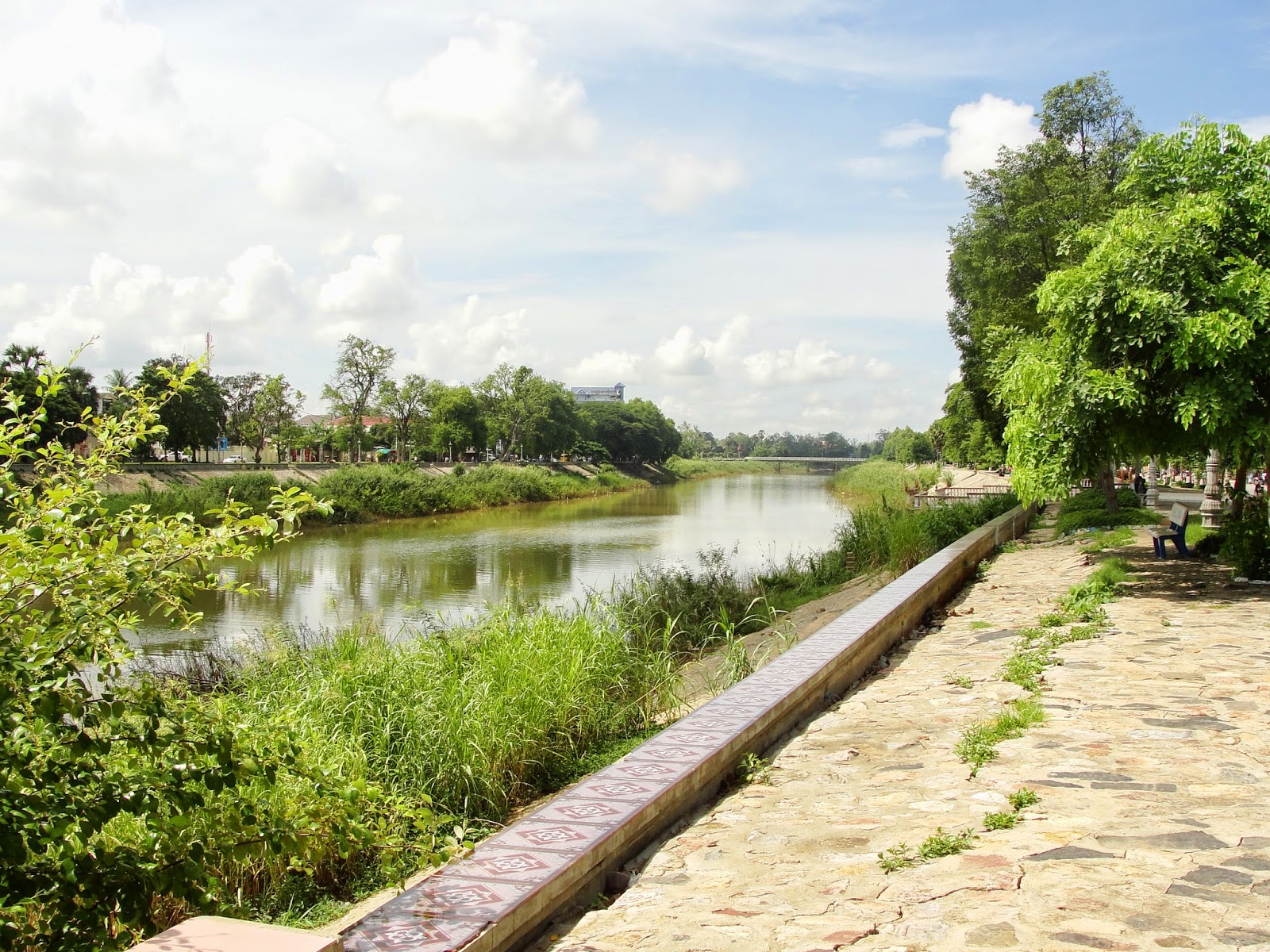 (some of which were even in the shade!) 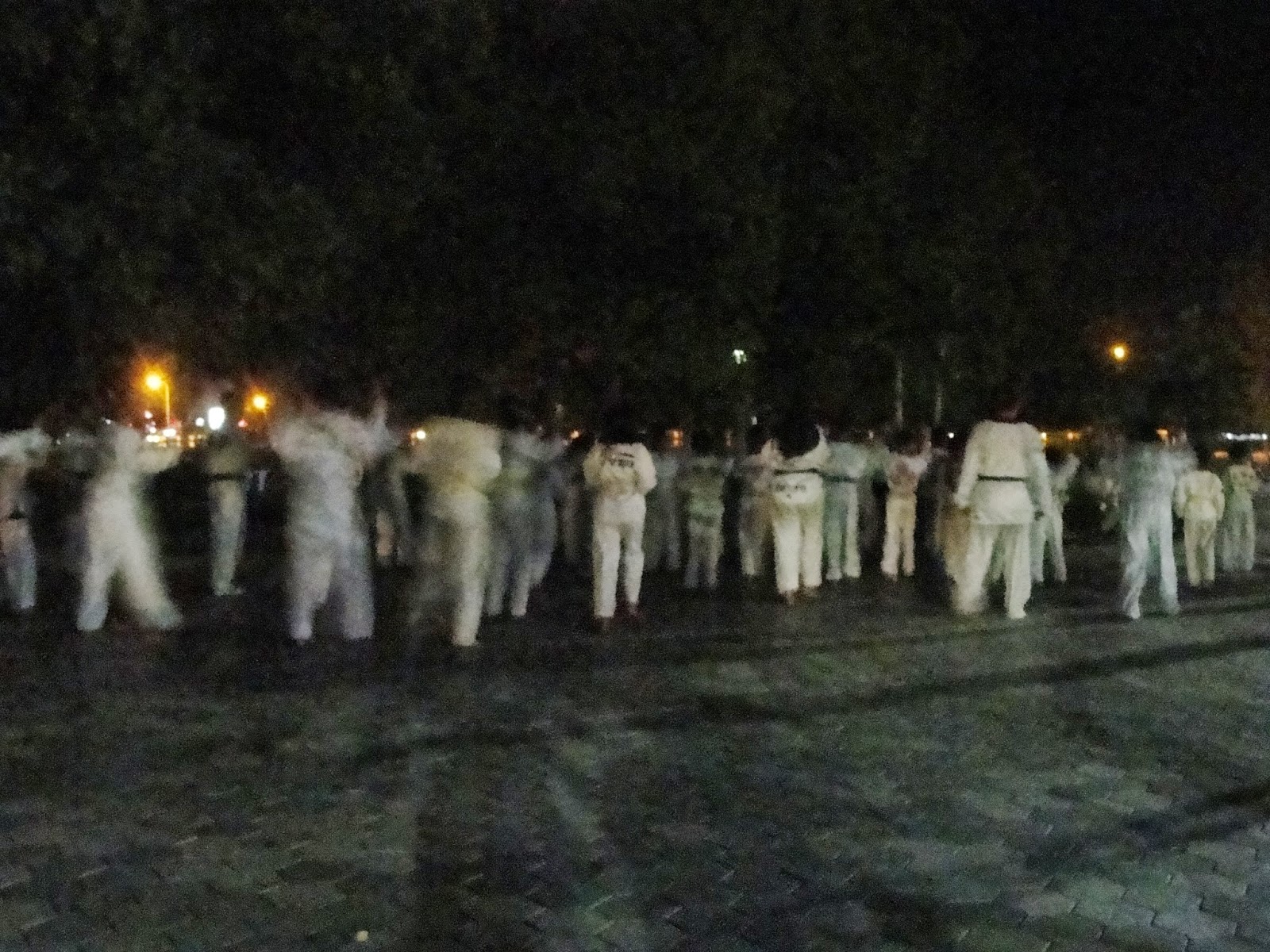 It had real food stalls and a real market and a surprisingly small backpacker area.  It was dusty and cramped and busy... but not overly so.  And we loved it. 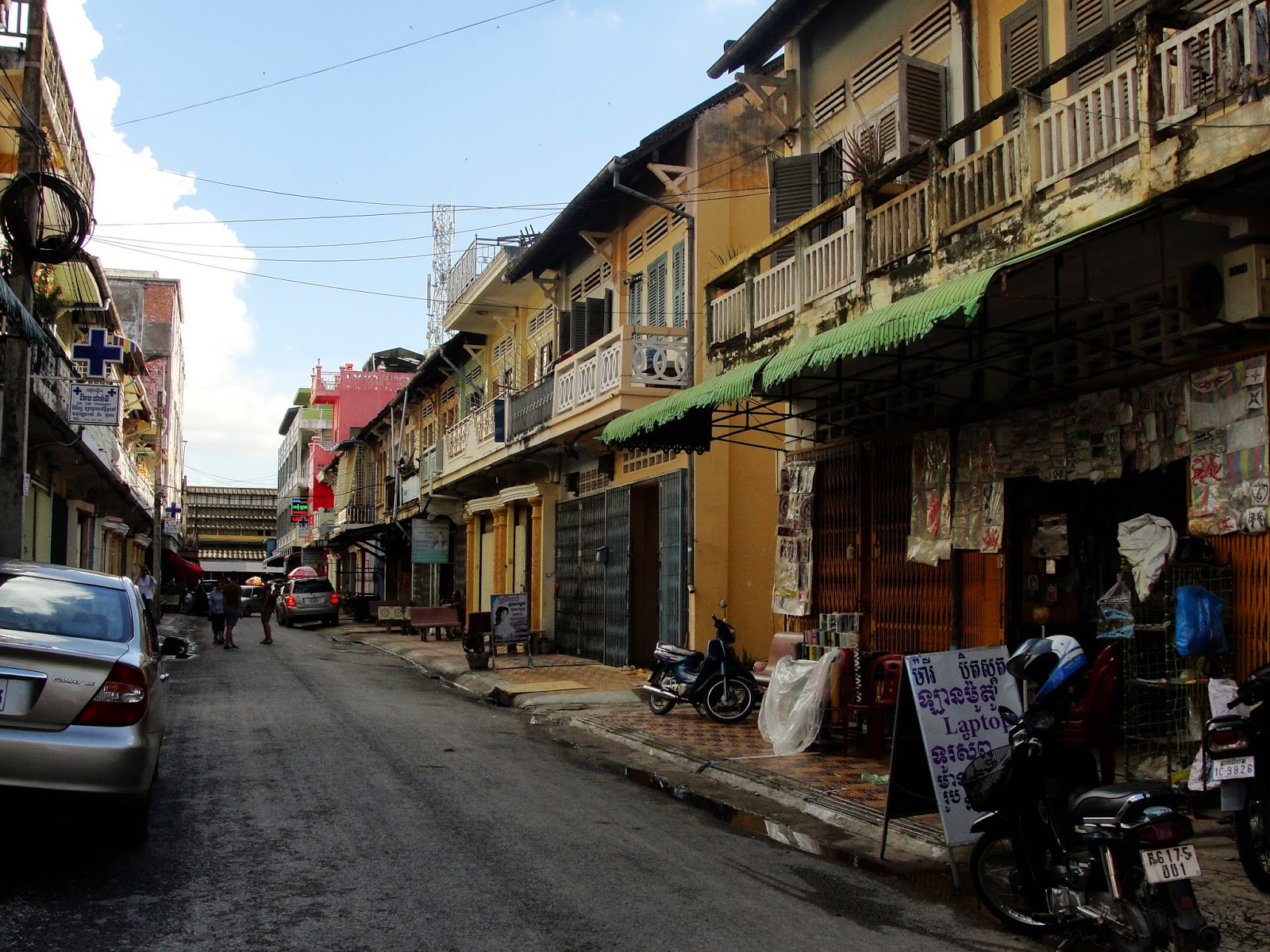 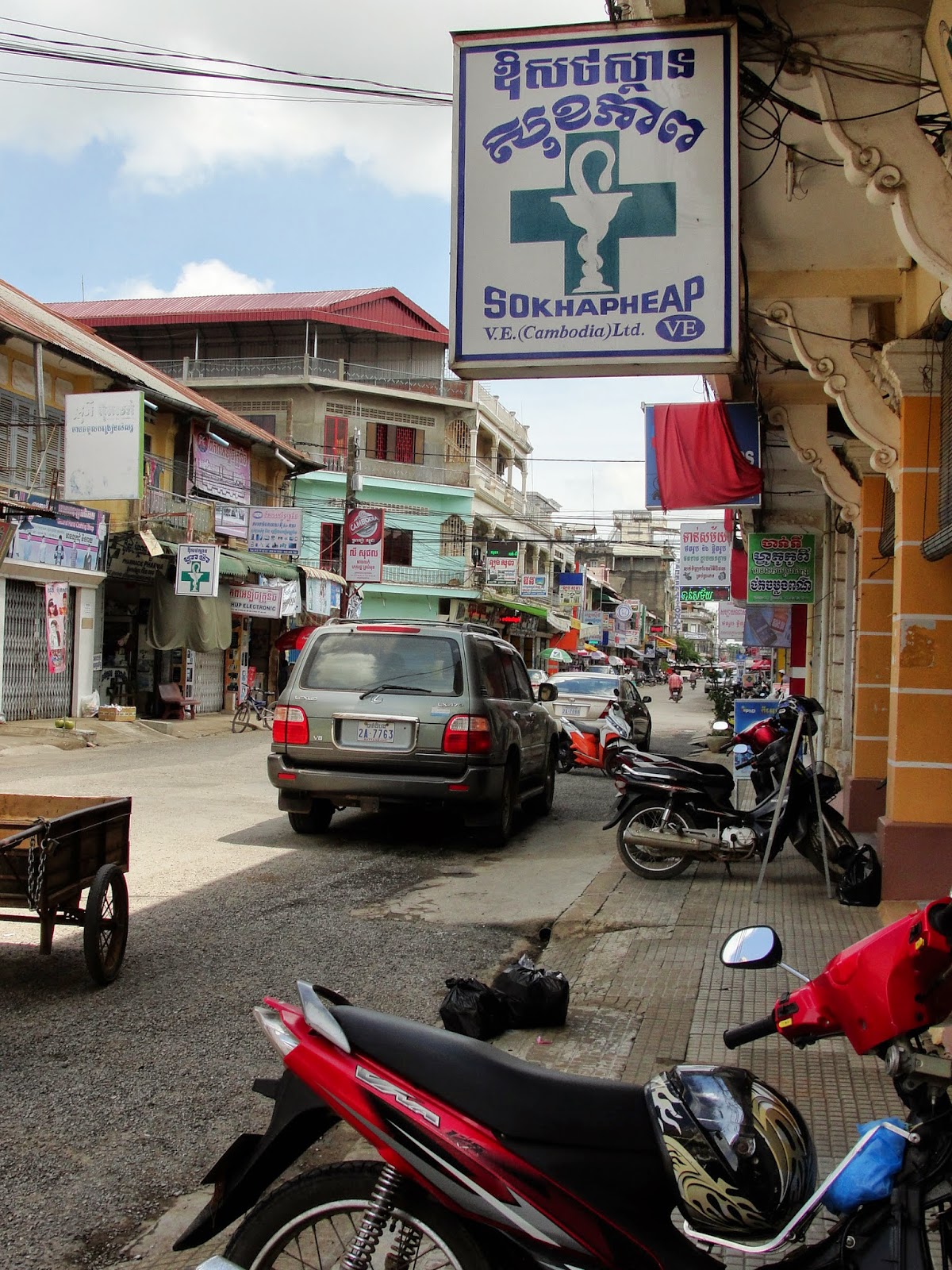 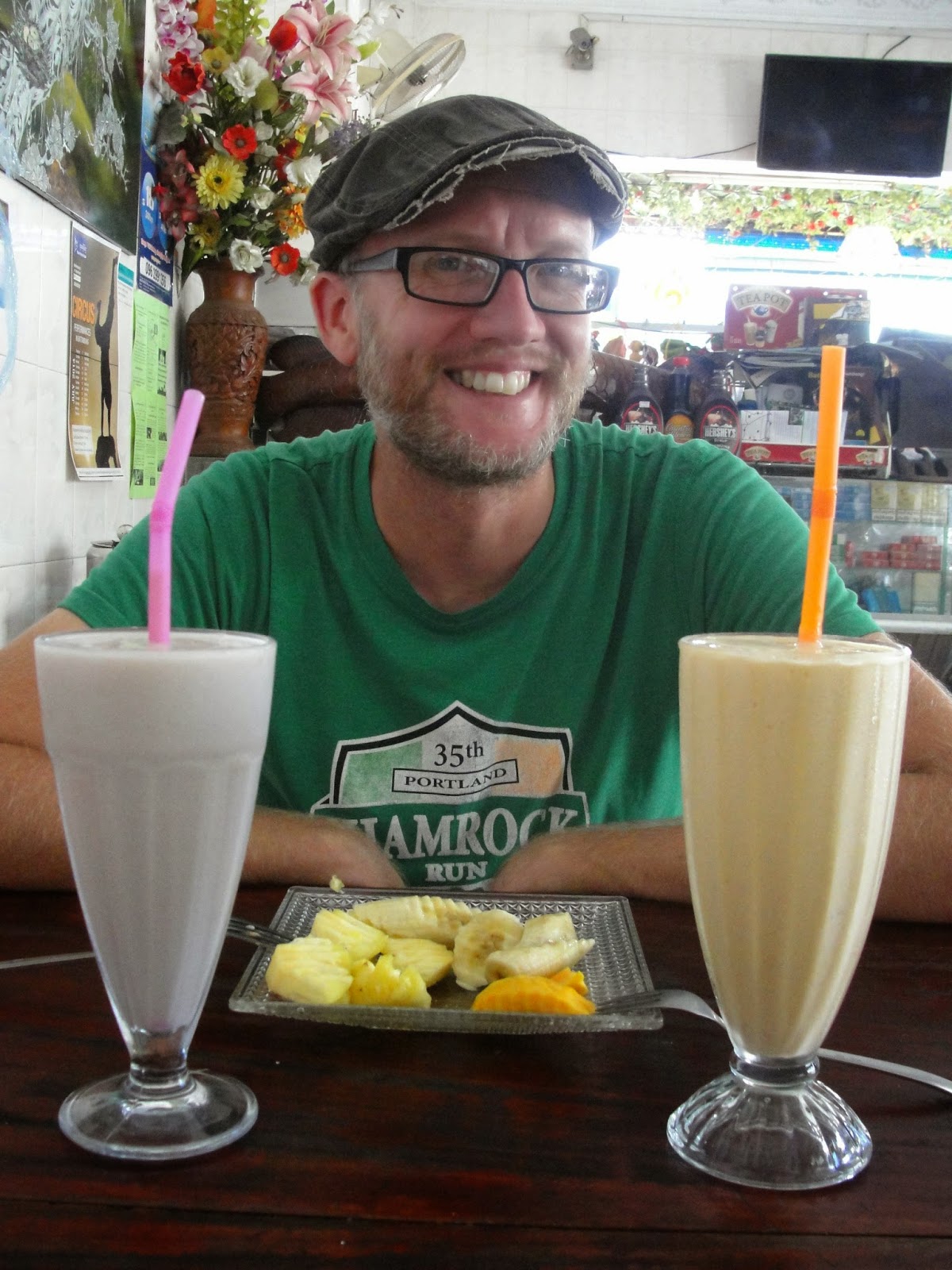 the taro was "interesting" 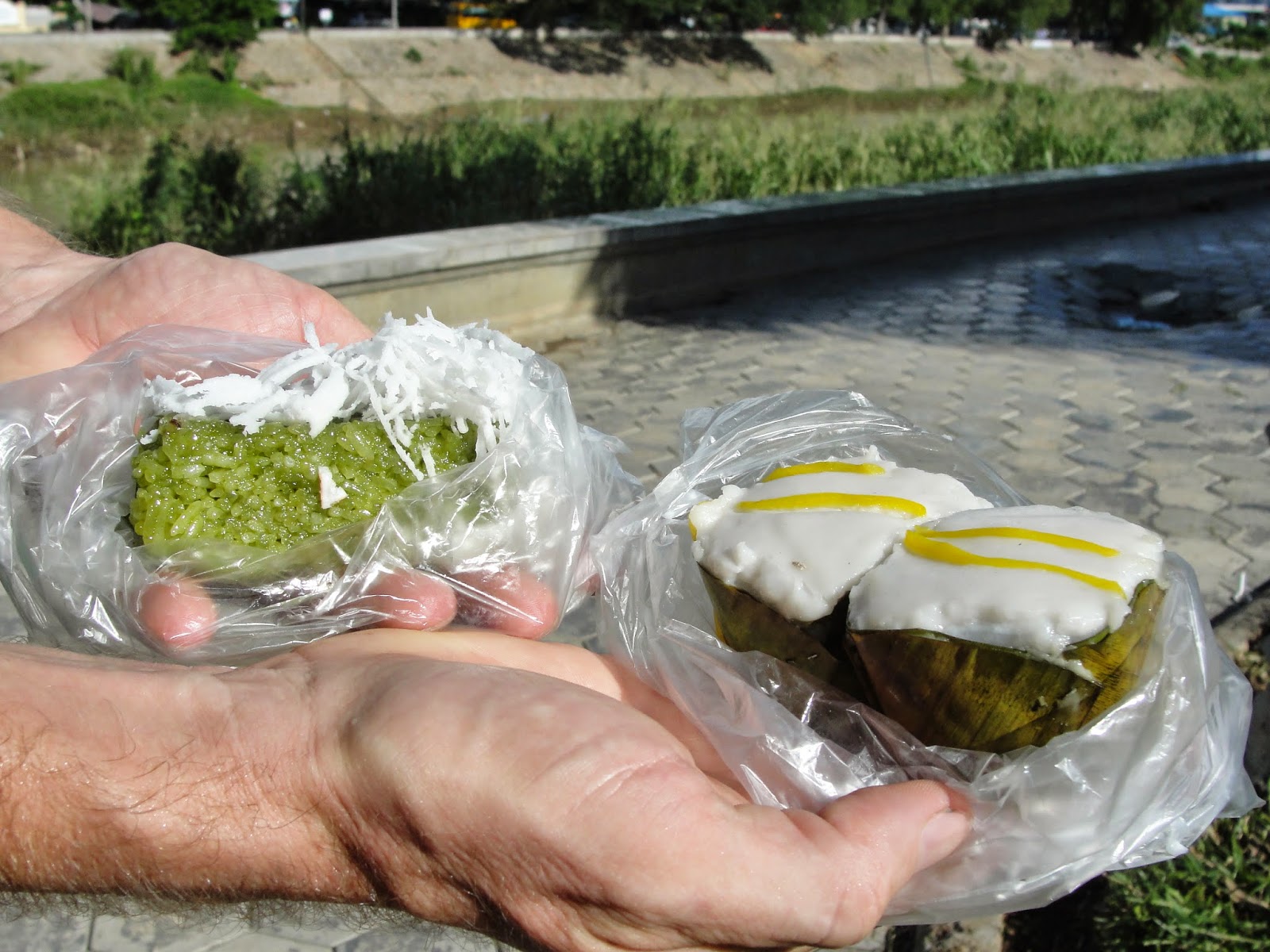 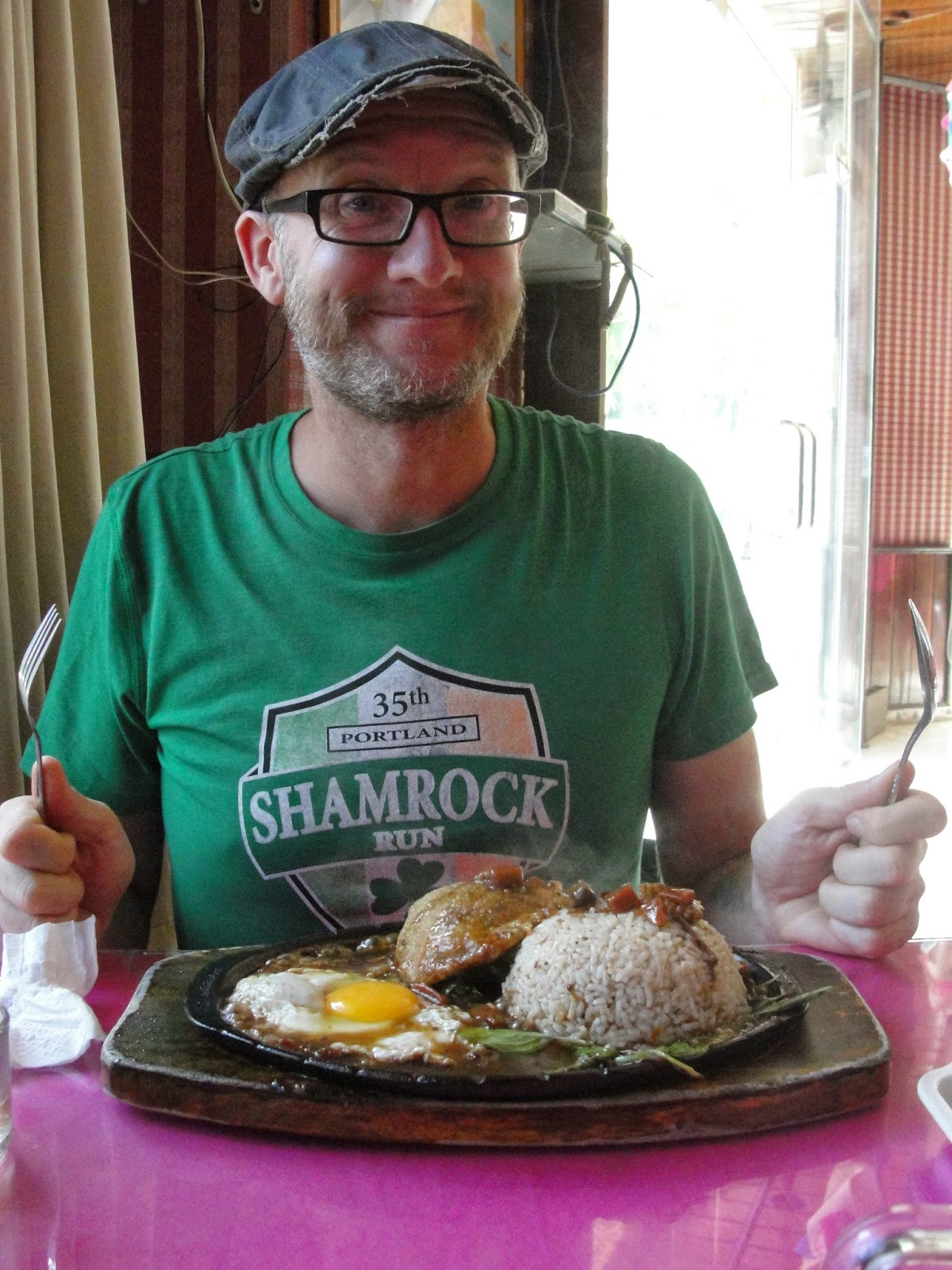 Lodging notes: we stayed at the Shang Hai Guest House. We kinda picked it for the name. The room was barren, the plumbing sucked, and the hallway smelled like durian. 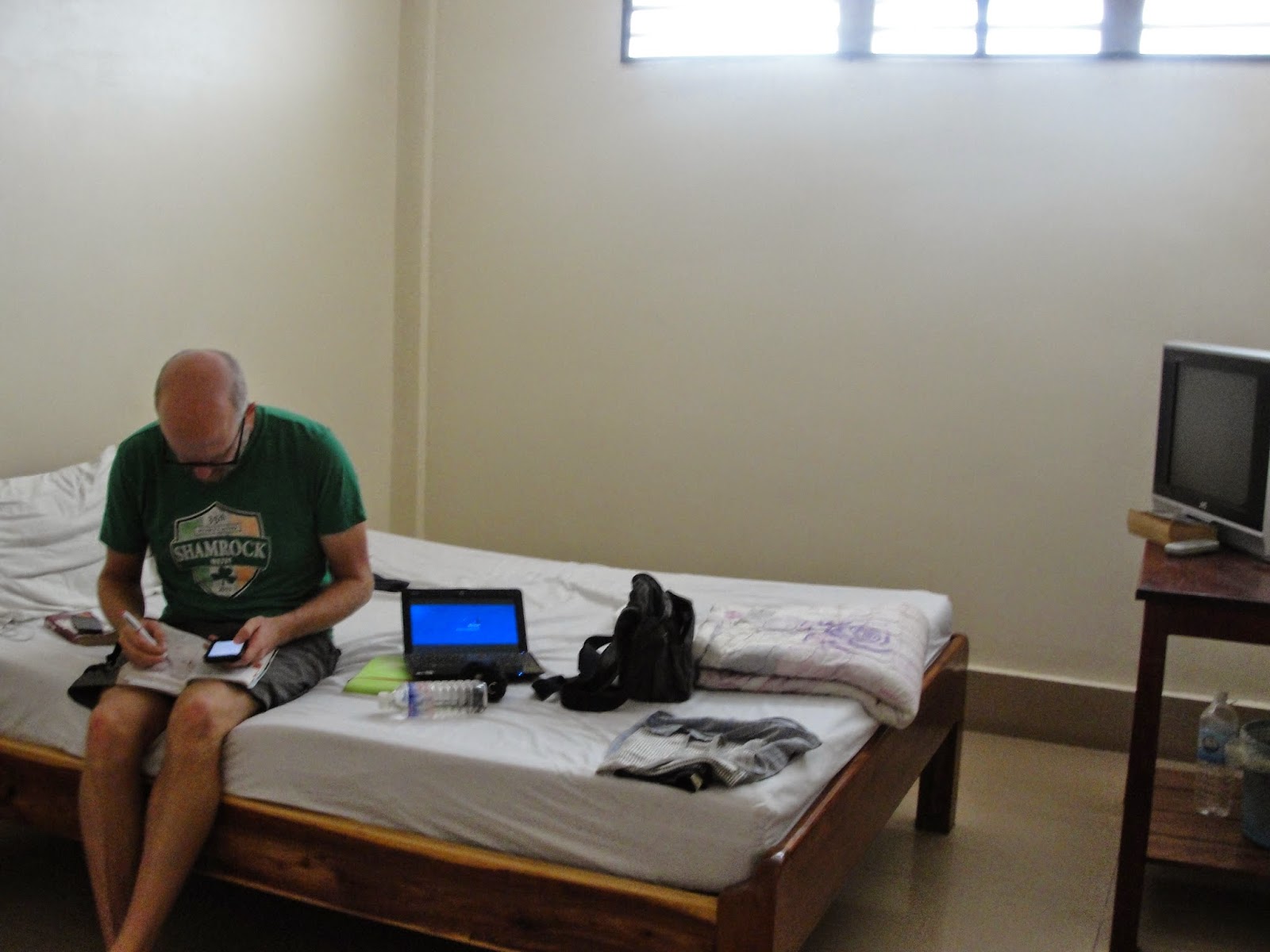 it was an appropriate name

Guesthouse aside, we liked Battambang a lot and we regret not staying an additional night. Or five.

But with Nepal looming we wanted to get to Bangkok sooner rather than later to wrap up any last-minute purchases, offloads, and noodle soup cravings. So back to Siem Reap we go...
Posted by Jen
Email ThisBlogThis!Share to TwitterShare to FacebookShare to Pinterest
Labels: asia, cambodia