Our Savannakhet-Vientiane bus ride was not quite as cushy as our Hue-Savannakhet ride. We spent 10 hours on the equivalent of an old school bus with no A/C (but fans installed in the ceiling - genius!) as the hot wind beat against our faces. It didn't get unbearable until mid-afternoon, though, and the people-watching made up for any discomfort. 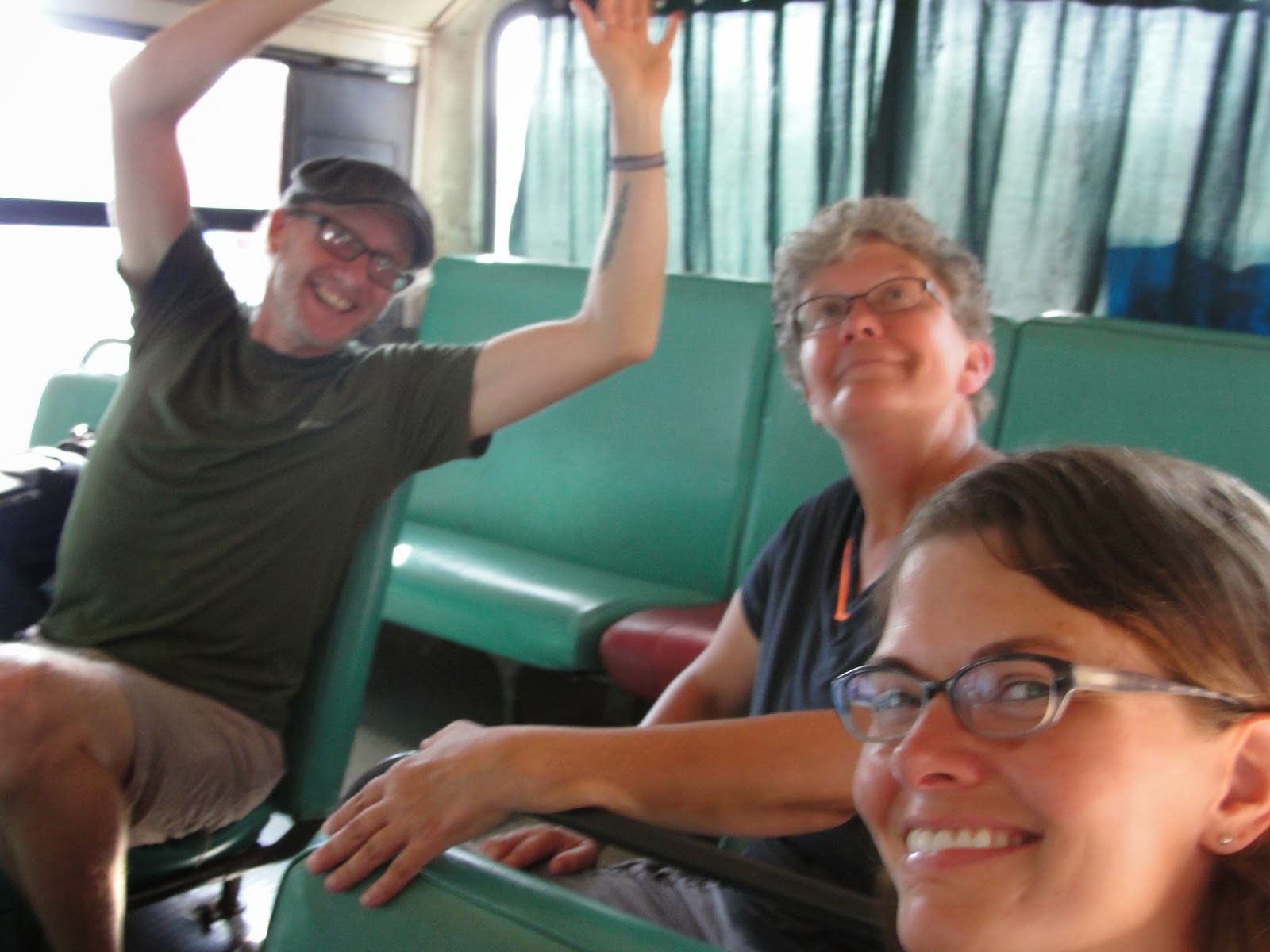 Vientiane, the capital of Lao, gets a bad rap in the travel blogger world.  Now that we've been we're not really sure why. Especially after coming from dusty, remote Savannakhet, we found Vientiane to be a pleasant city full of culture - as long as you were willing to look for it, and as long as you could stand the heat.

We had originally planned two nights in Vientiane but this got extended to three - and then four - when we decided to get our visas for Thailand (the reason most people seem to visit the city). This allowed us plenty of time to sightsee and loaf around... our favorite combo these days.

One of our favorite stops was the COPE Center. "Favorite" is probably not the right word, as this is a museum dedicated to educating people about the perils of unexploded ordinance (UXO), but the displays are powerful without being gratuitous and the short films featuring personal accounts of UXO accidents are really well done. 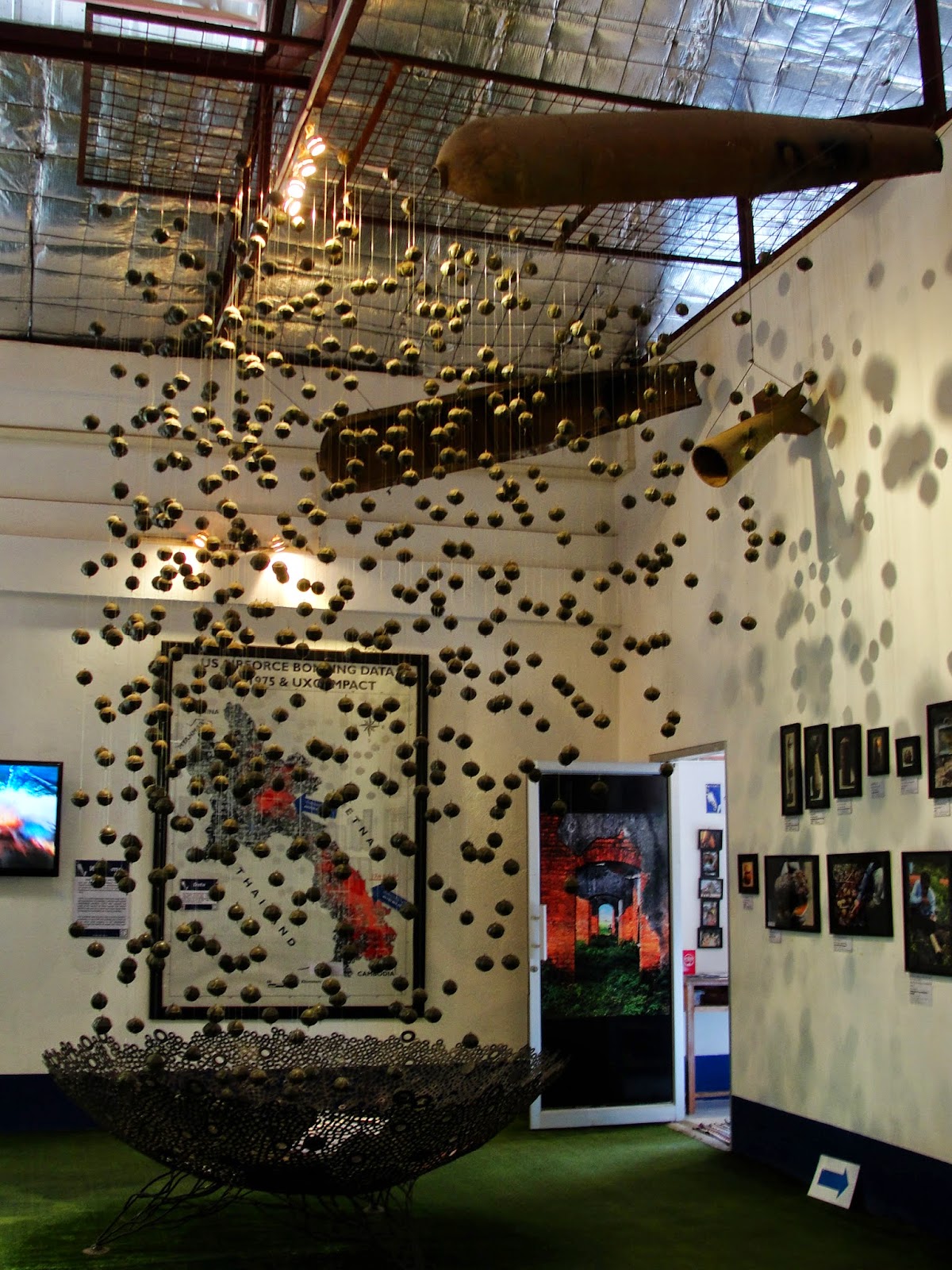 COPE was originally founded to provide prosthetics for amputees who lost limbs due to UXO; now they are able to help folks injured in traffic and work accidents as well. 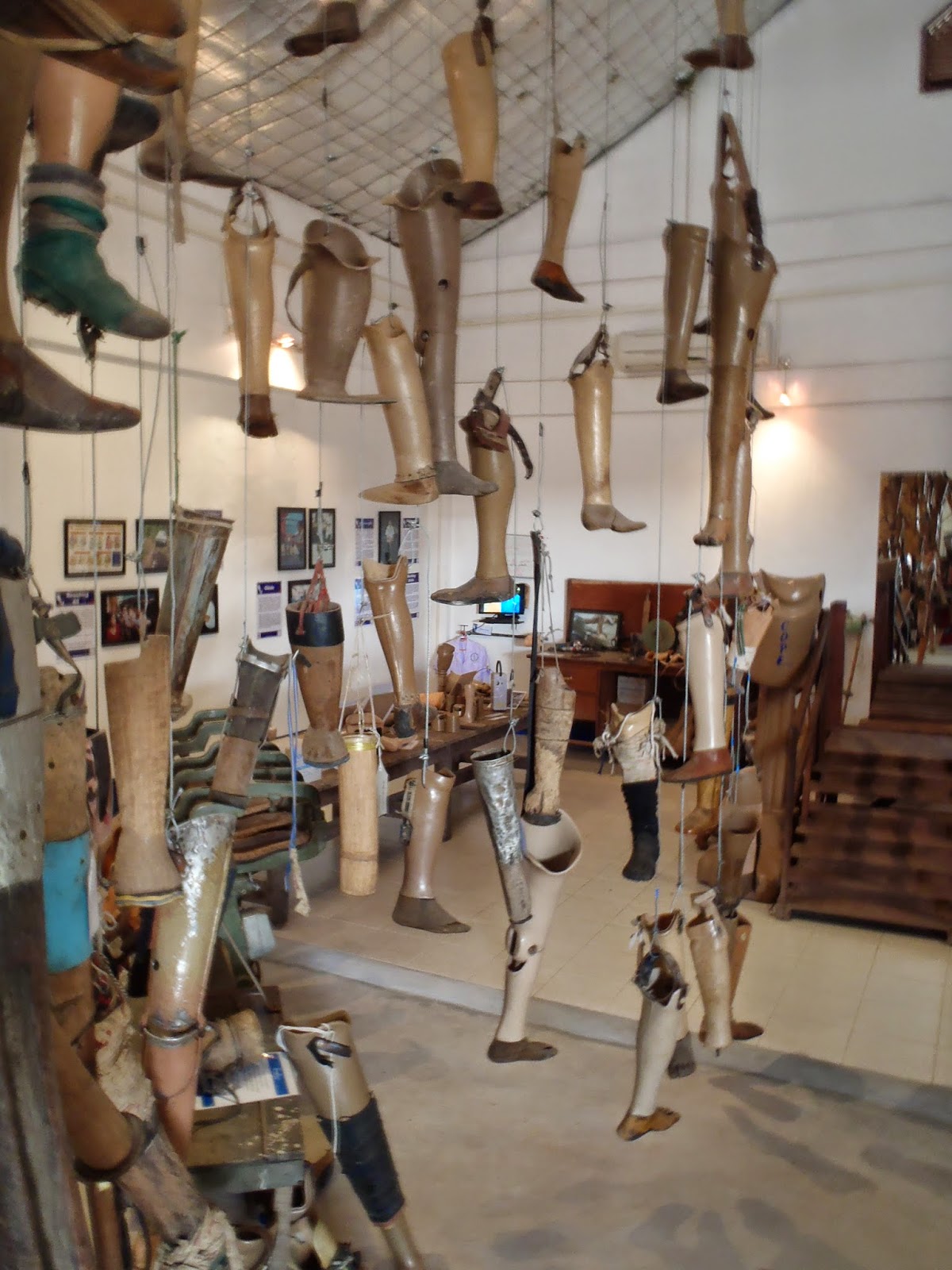 COPE offers educational workshops and training for locals... they do a lot, actually! Check out their web site and definitely visit if you find yourself in Vientiane.

Another favorite visit was the National Museum. Downstairs we saw really cool archaeology discoveries, ethnographic finds, and a nice exhibit on the Plain of Jars which was great since we didn't plan to visit. Upstairs we learned about the ethnic tribes in Lao and we also learned some fairly one-sided information about the French Indochina and "American" wars (but it was still an interesting perspective, and seeing how this country has been poverty-stricken and severely pummeled over the past few centuries gives you a sense of the peoples' resolve).

On the way out of the museum you are treated to dozens of 8x10 photos in cheap plastic frames featuring "action" scenes from the various ministries in Lao - the Ministry of Agriculture, the Ministry of Education, etc. It was clearly intended as national pride for locals and while elementary in display (especially compared to the rest of the museum) and mostly lost on us, it was still a fascinating view into what's seen as important here.

In non-war news, despite its abundance of cars Vientaine is really easy to explore on bicycle. The traffic is scarily calm - car drivers actually let you pass instead of zooming around you, and even the motorbikers usually give bicyclists the right of way. Such a pleasant change from the crazy Vietnam traffic! Since we biked to the Thai embassy - twice - we had a little time to explore before the heat of the day set in.

Day One we visited Pha That Luang, the most important national monument in Lao. Allegedly, this houses a piece of Buddha's breastbone although this has never been substantiated. The French kind of ruined it when they rebuilt it in the early 1900s (in their restoration they changed the orientation so that the main entrance faced the wrong direction), but at 45m tall it's still a pretty remarkable building. 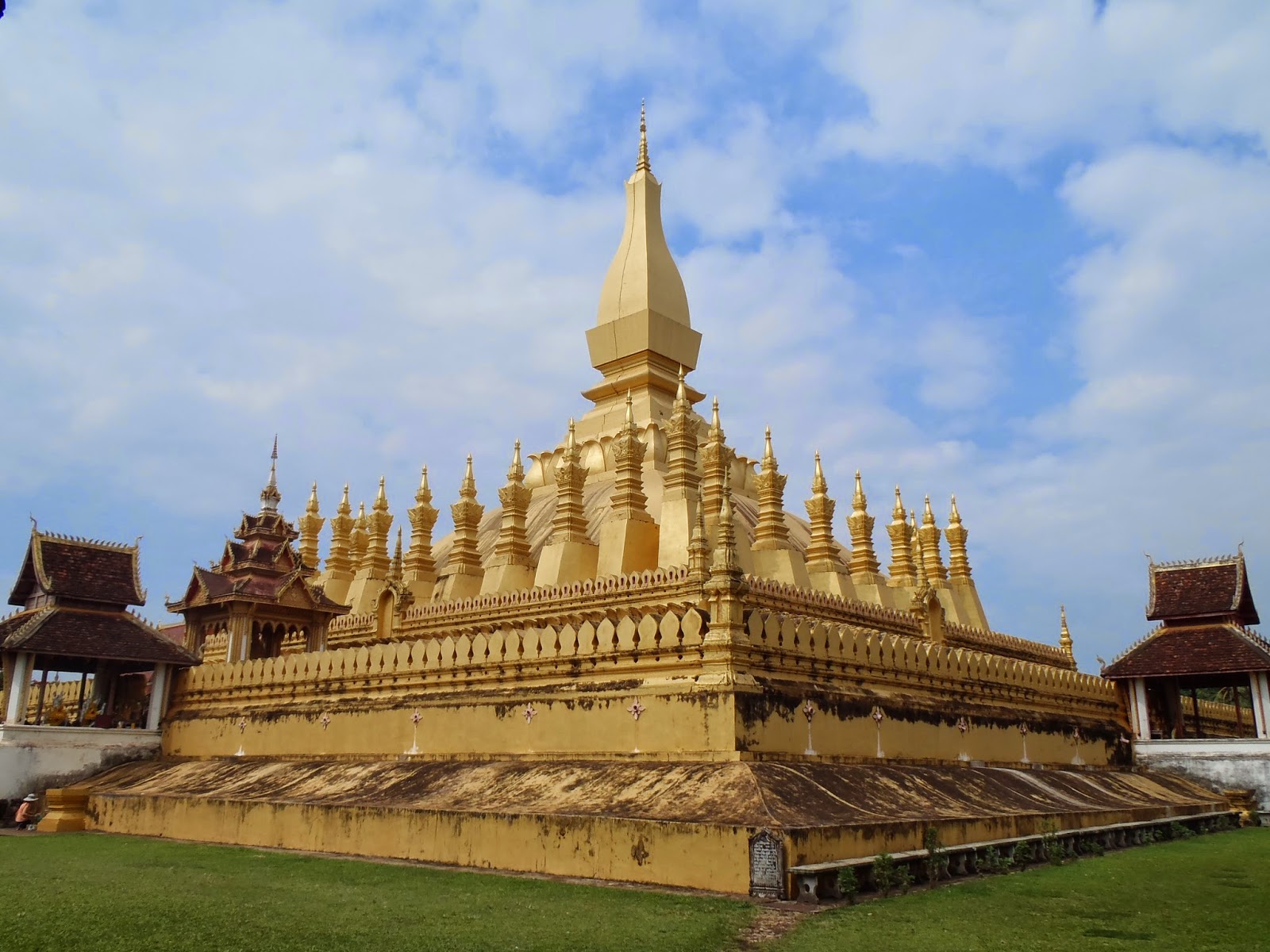 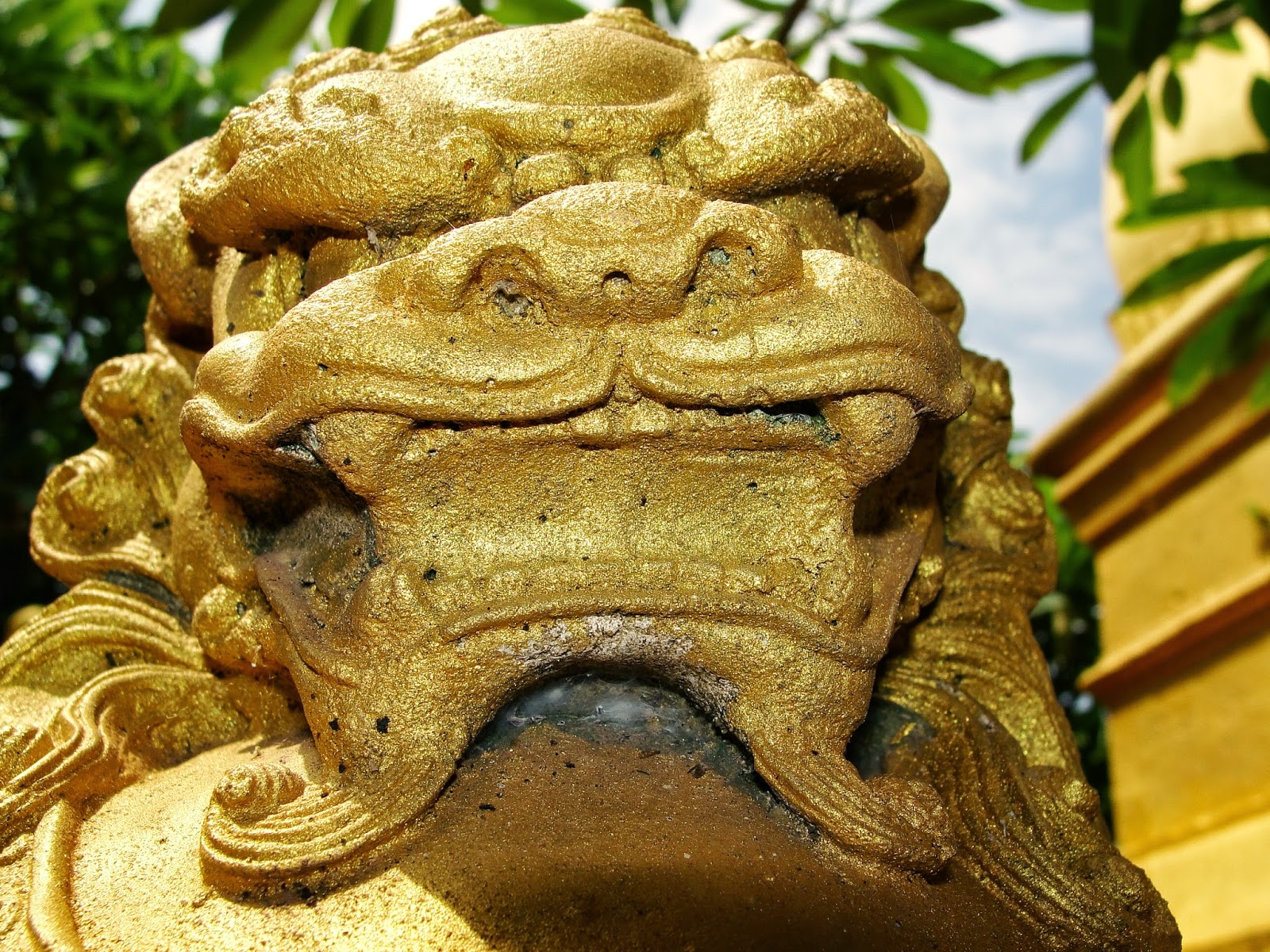 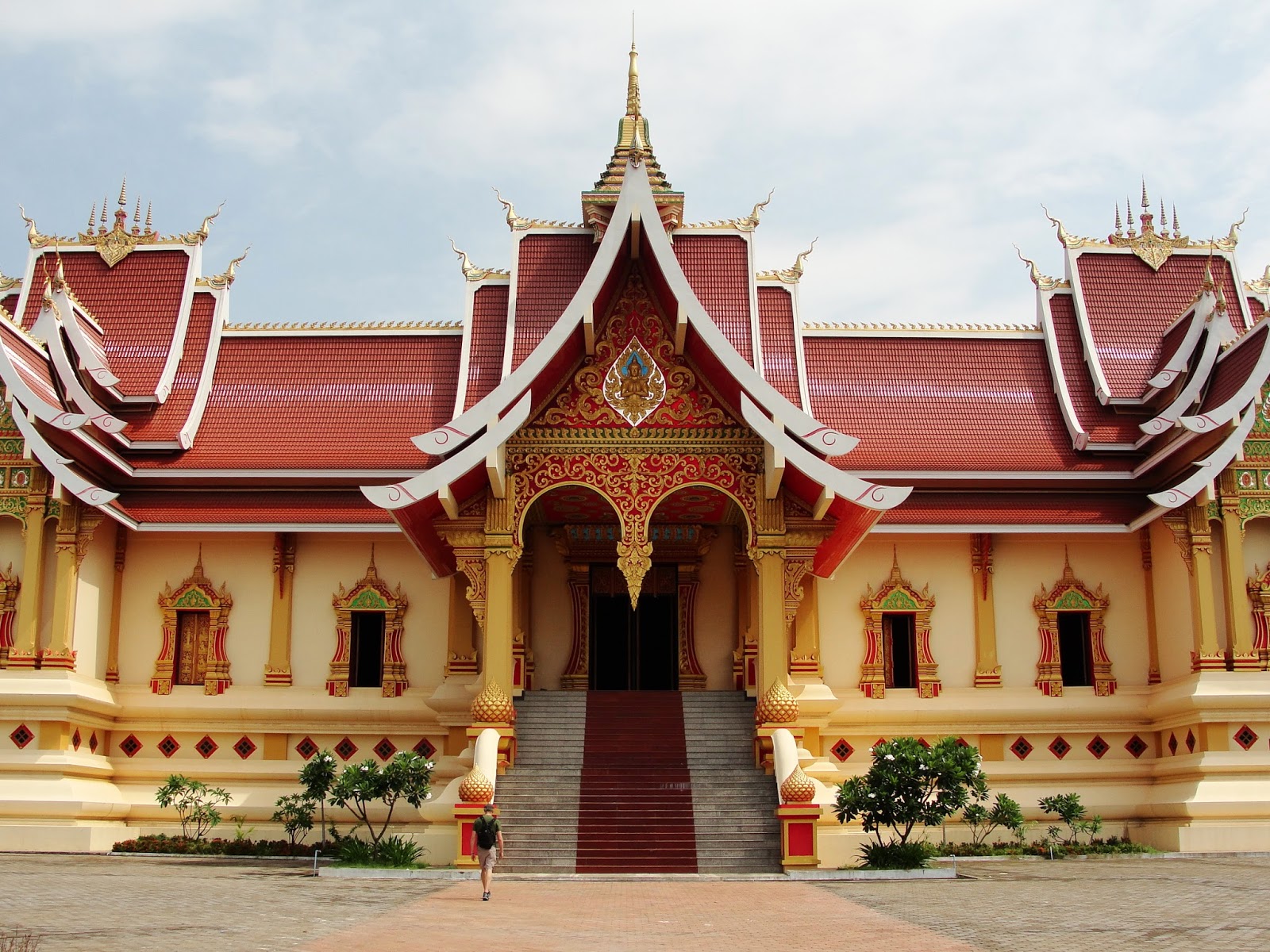 Wat That Luang Tai
(housed beautiful paintings when we visited)

There's no shortage of wats in Vientiane but we only (sort of) visited one other, Wat Si Saket. This is said to be Vientiane's oldest surviving temple. And that's all we can really tell you about it, other than the fact that it's pretty from outside the gate. We're saving our wat tour funds for the big one in Cambodia. 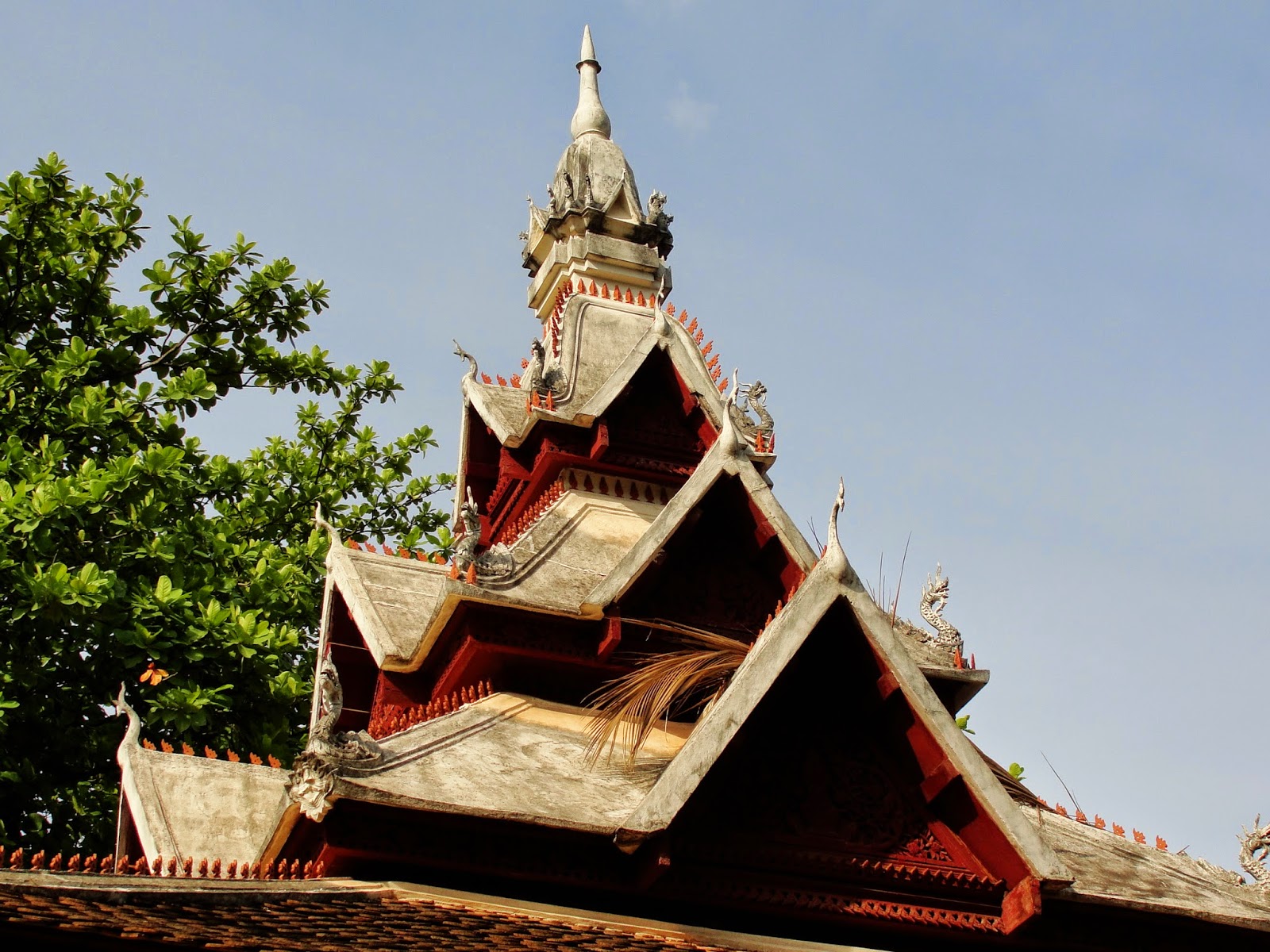 according to the internet,
the three tiered roof represents
the Buddha, the Dharma (teaching),
and Sangha (fellowship of followers of the teaching) 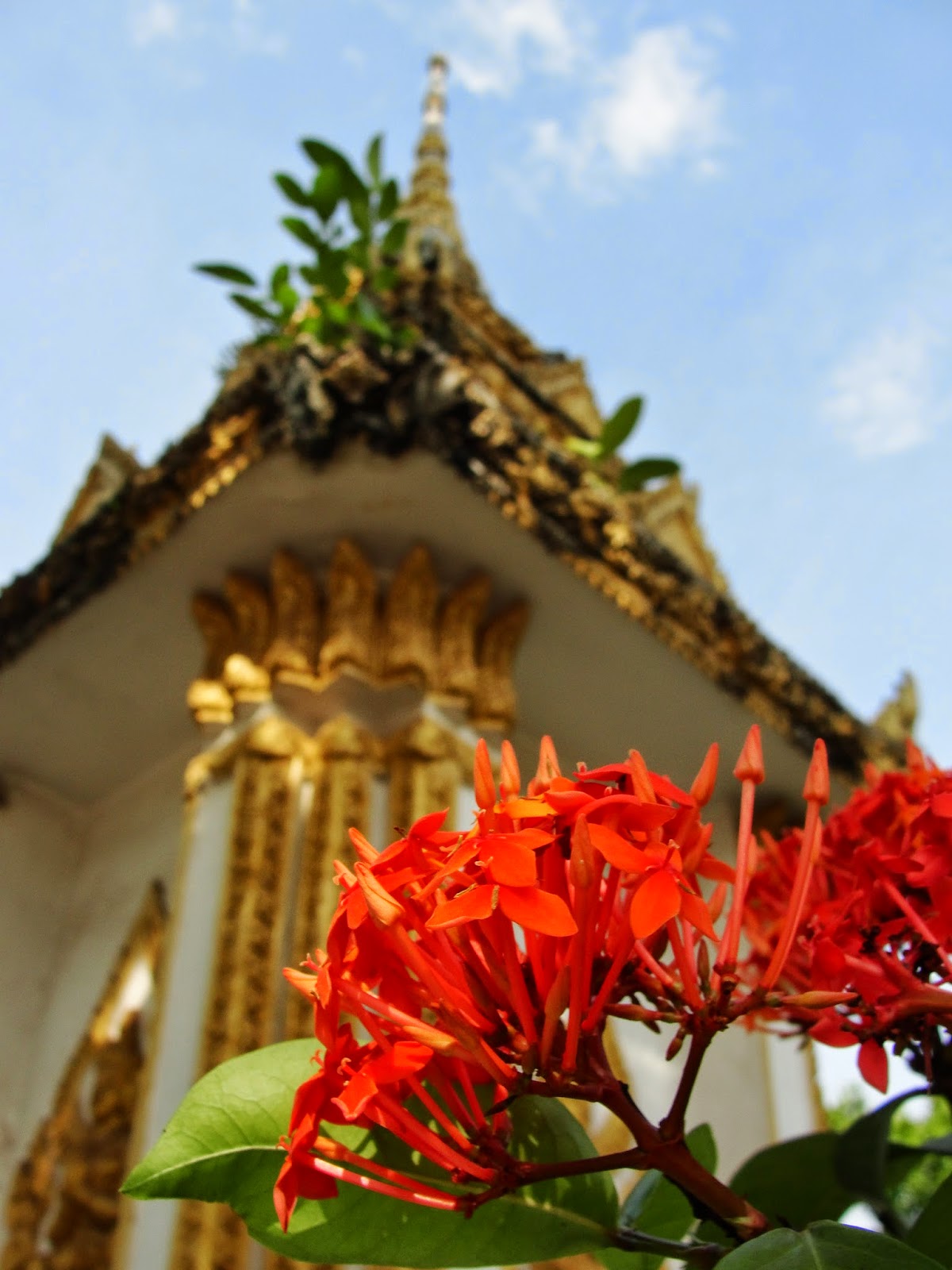 also just learned that
gold in Buddhism symbolizes the sun, or fire 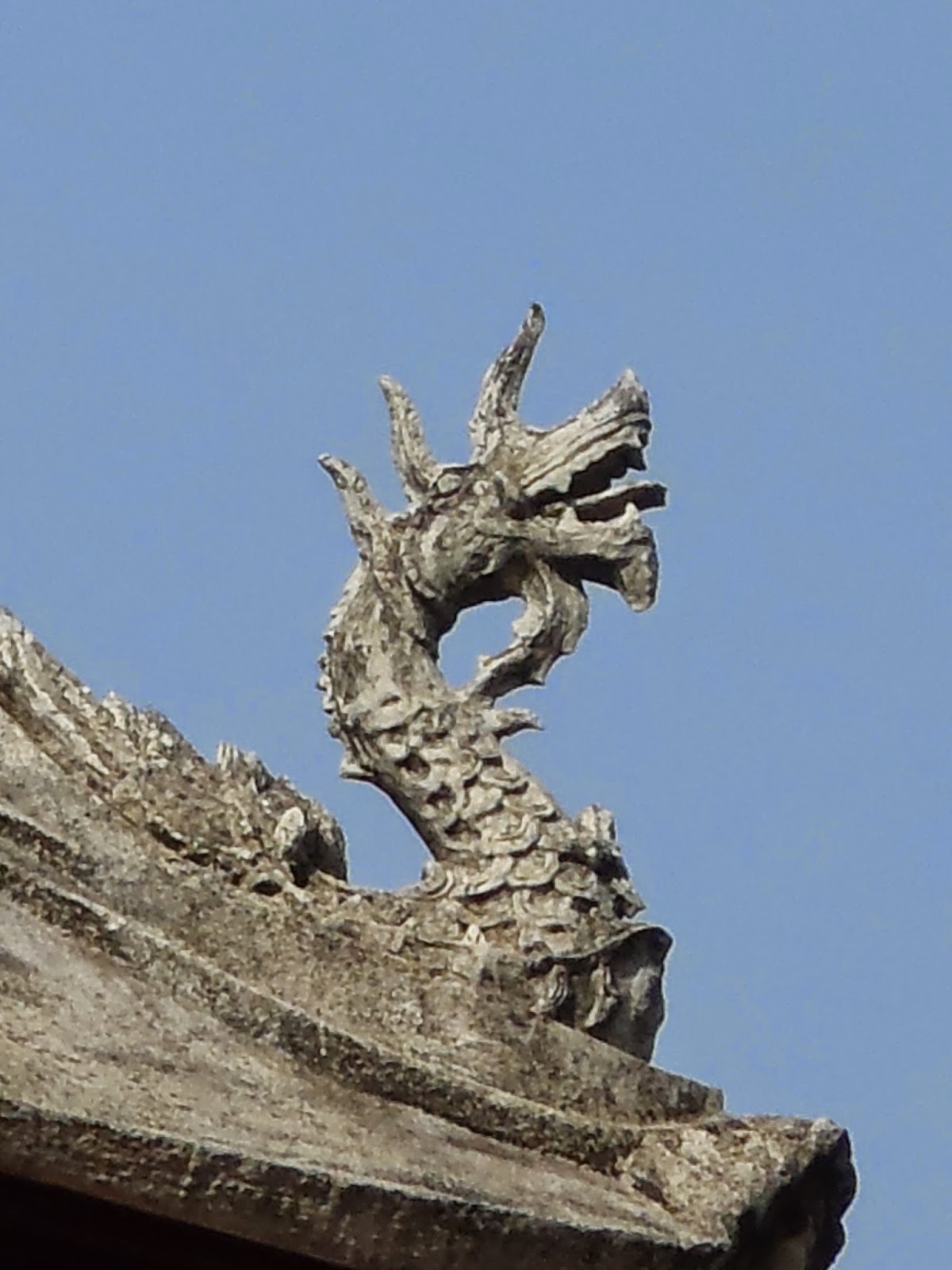 Other odd cultural sites we visited included Patuxai, built in the 1960s with US-purchased cement that was supposed to be used for a new airport. There is an awesome sign inside the monument that says "From a closer distance, it appears even less impressive, like a monster of concrete." 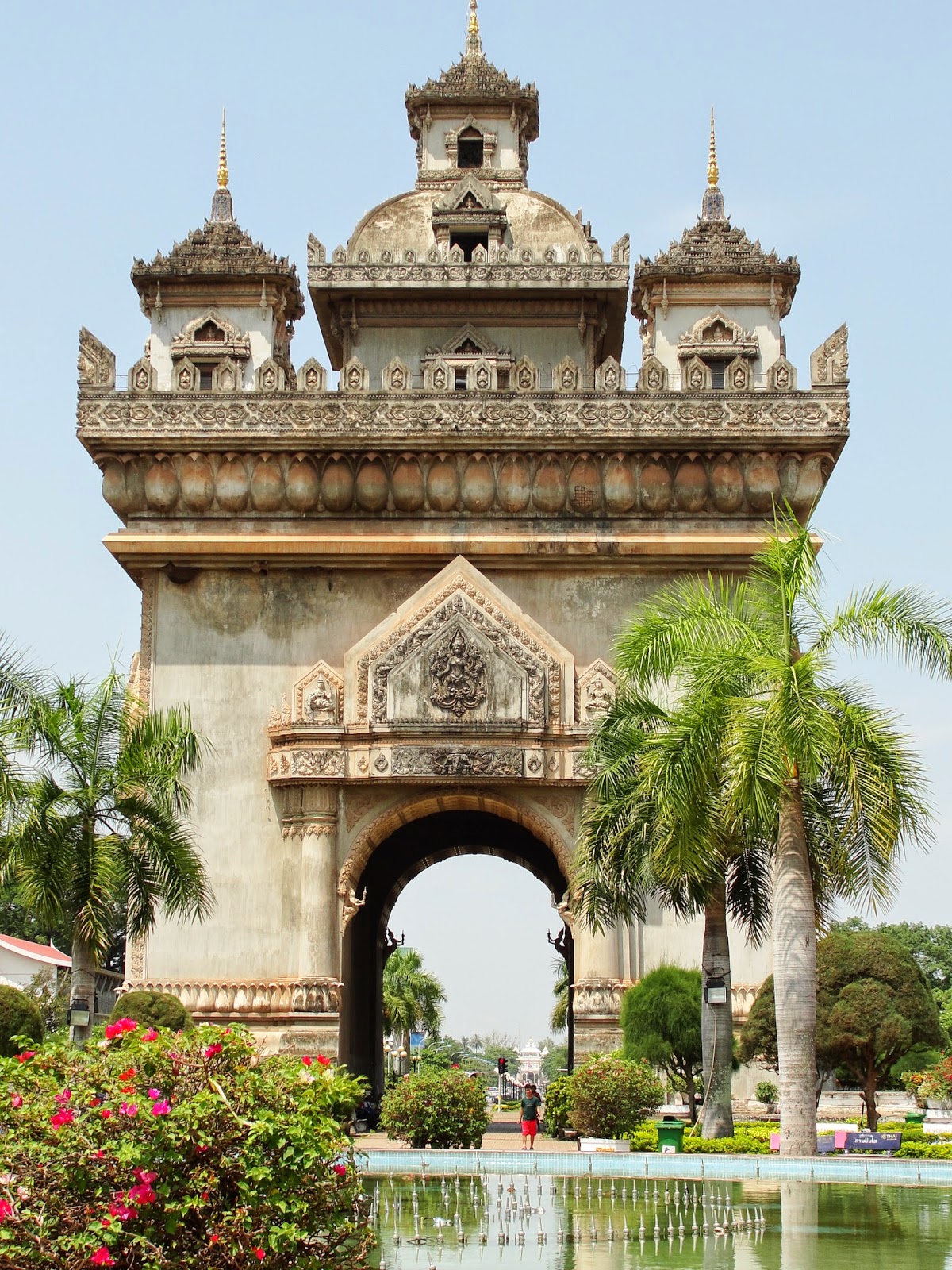 we are as unimpressed as the Lao people

And then there was the World Peace Gong... 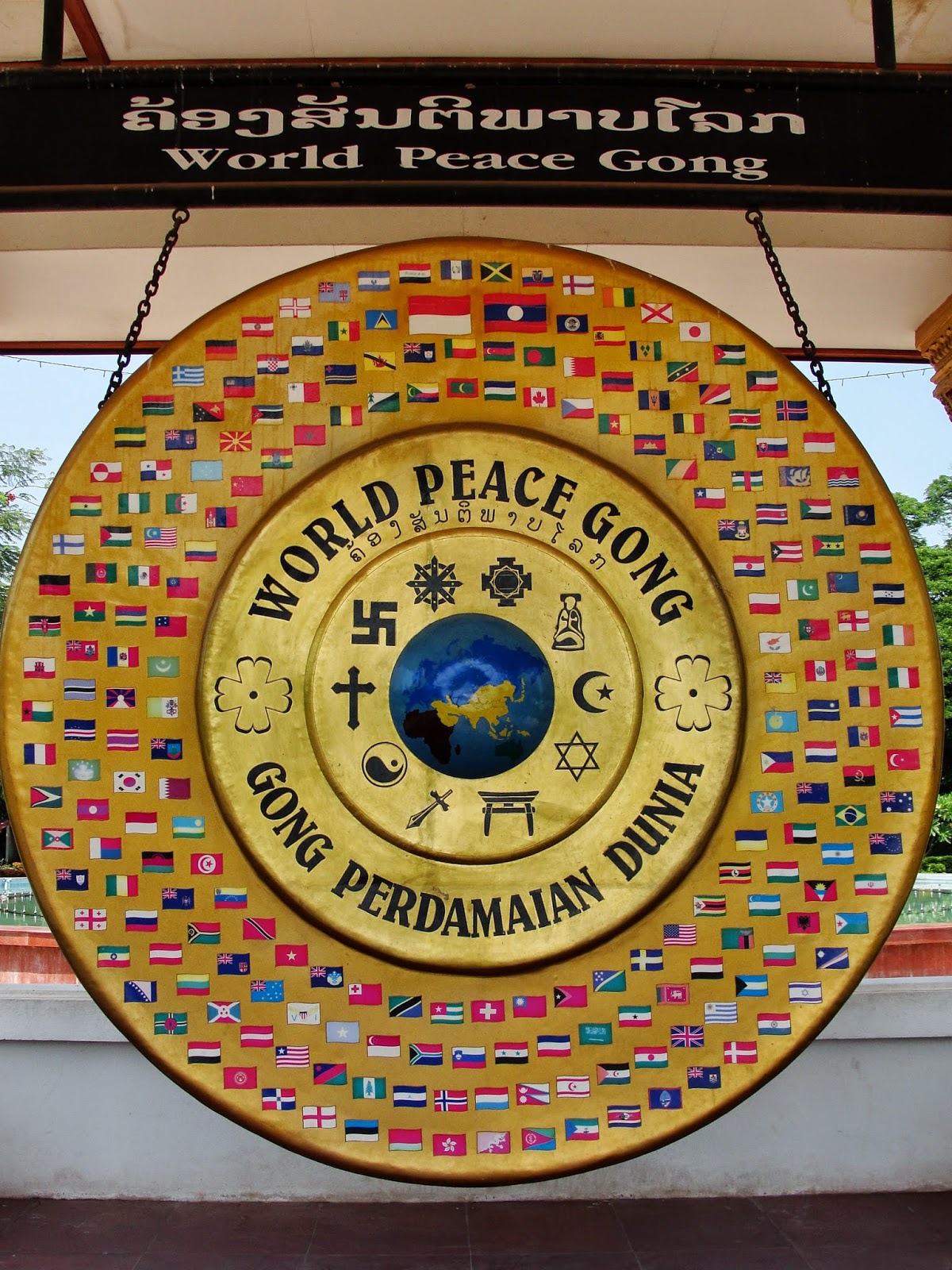 And a stupa in the middle of a roundabout. 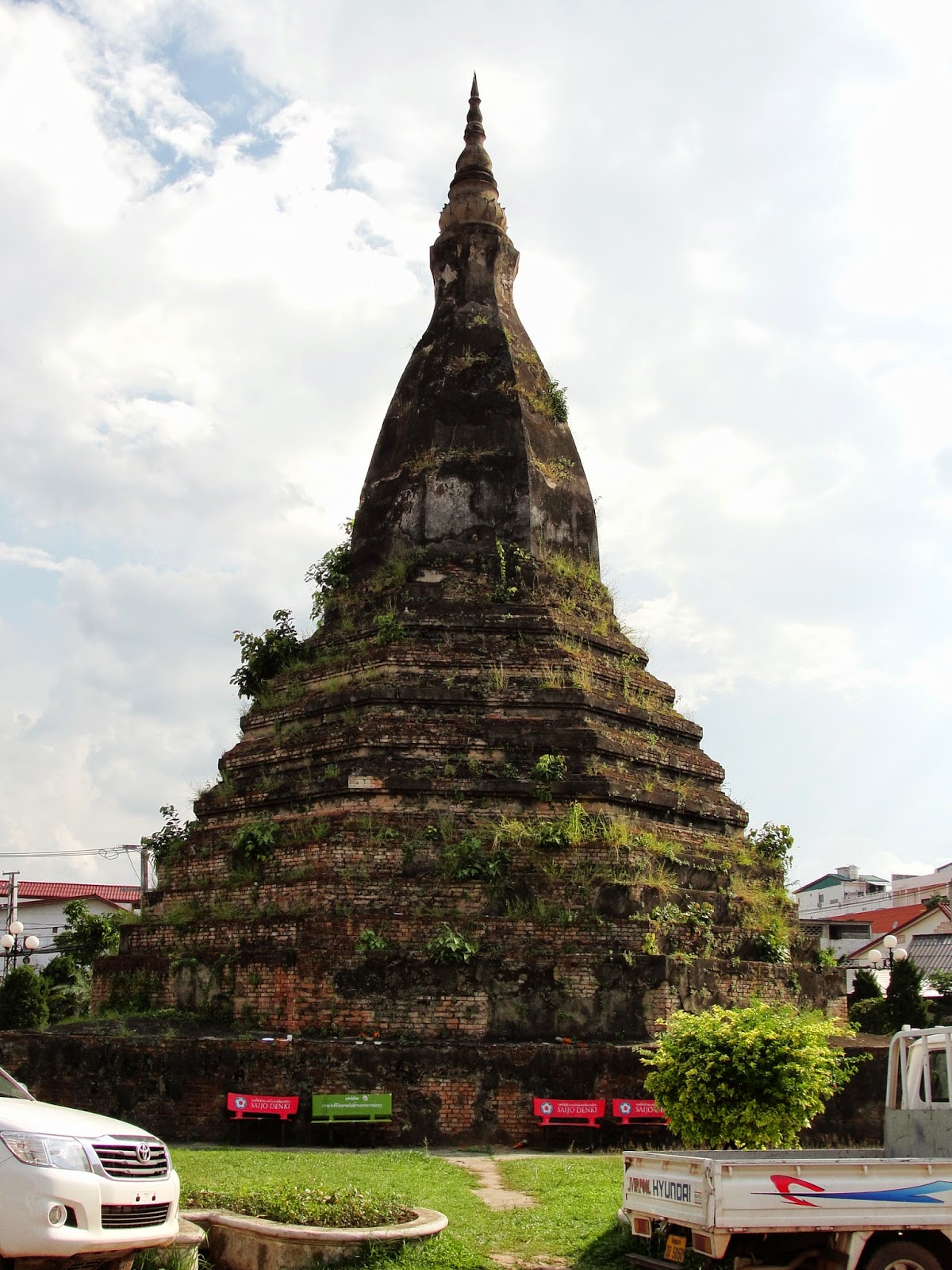 And many more random sights, you can see them on Flickr.  Start here.

We spent a decent amount of time near Vientiane's riverfront. Thailand is just across the river, and at night (when it's not raining) the promenade lights up with a lively night market and lots of people walking, running, jazzercizing, and just enjoying the outdoors. It was a nice place to hang out. 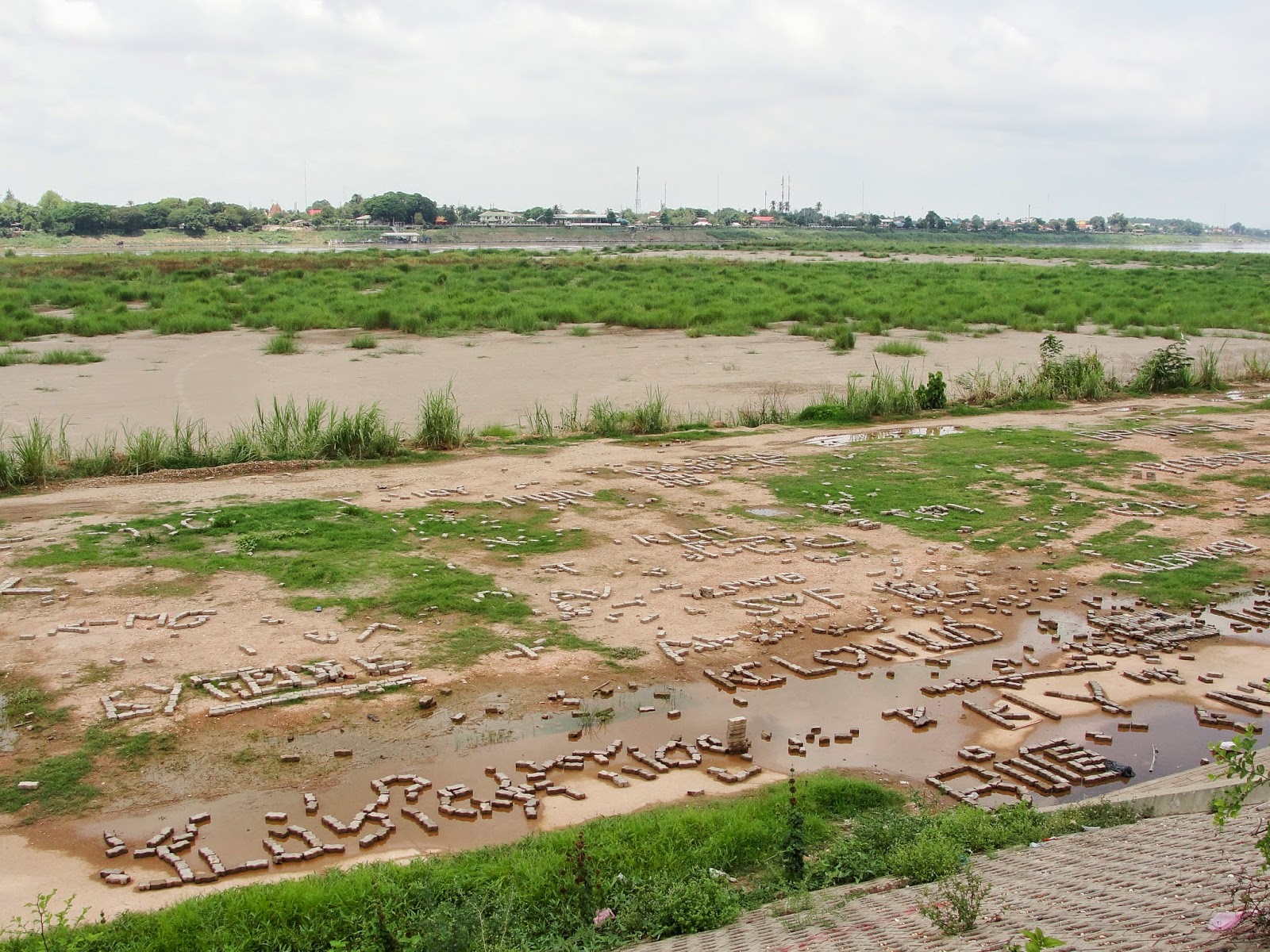 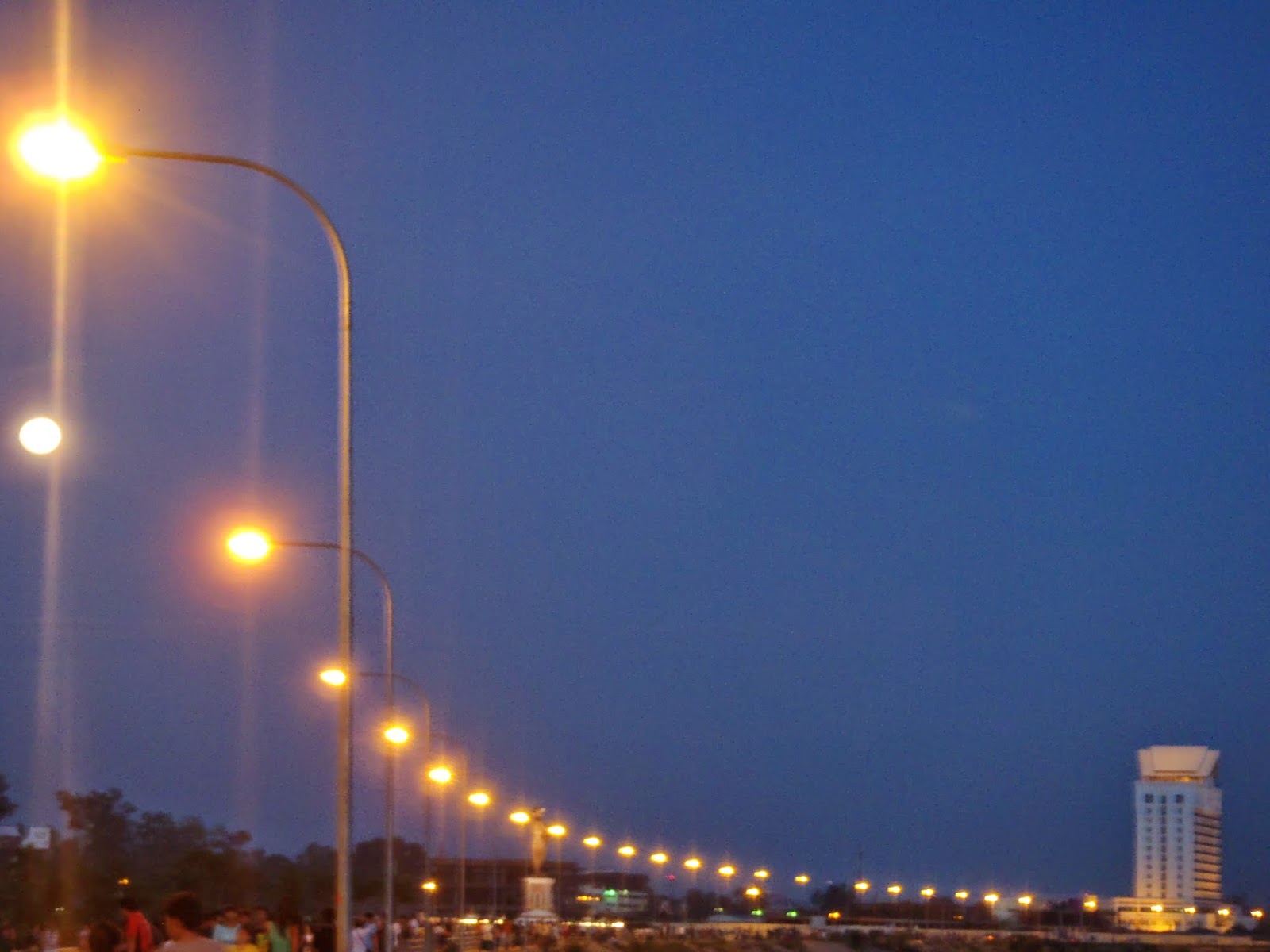 Food notes: Vientiane definitely offers food for everyone. In our neighborhood there were plenty of restaurants serving western fare while the local night markets served fruit shakes and more traditional food. Generally speaking, we stuck to familiar dishes like fried rice but sometimes we got adventurous... 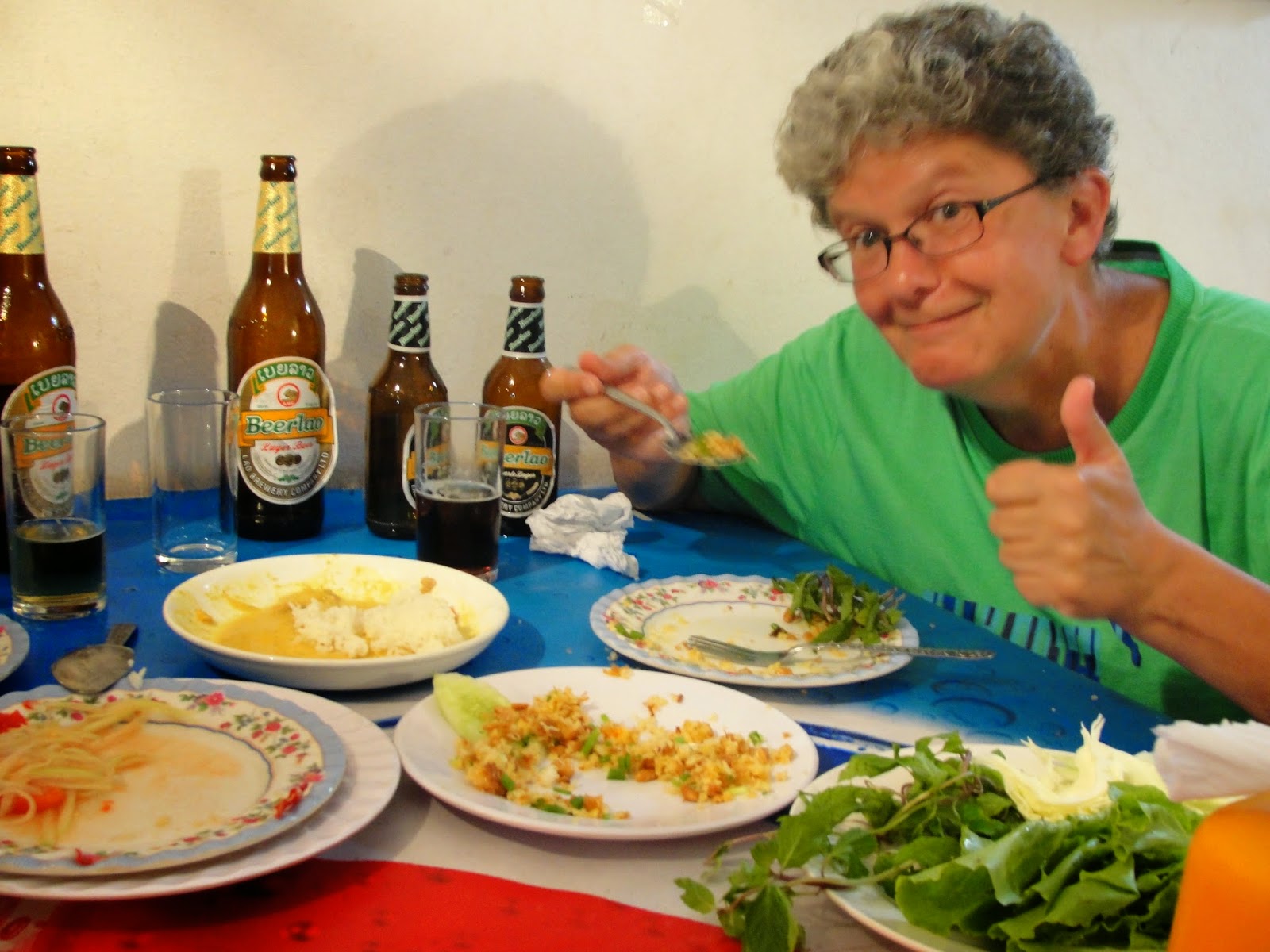 beers definitely helped
(with the heat, not the food enjoyment) 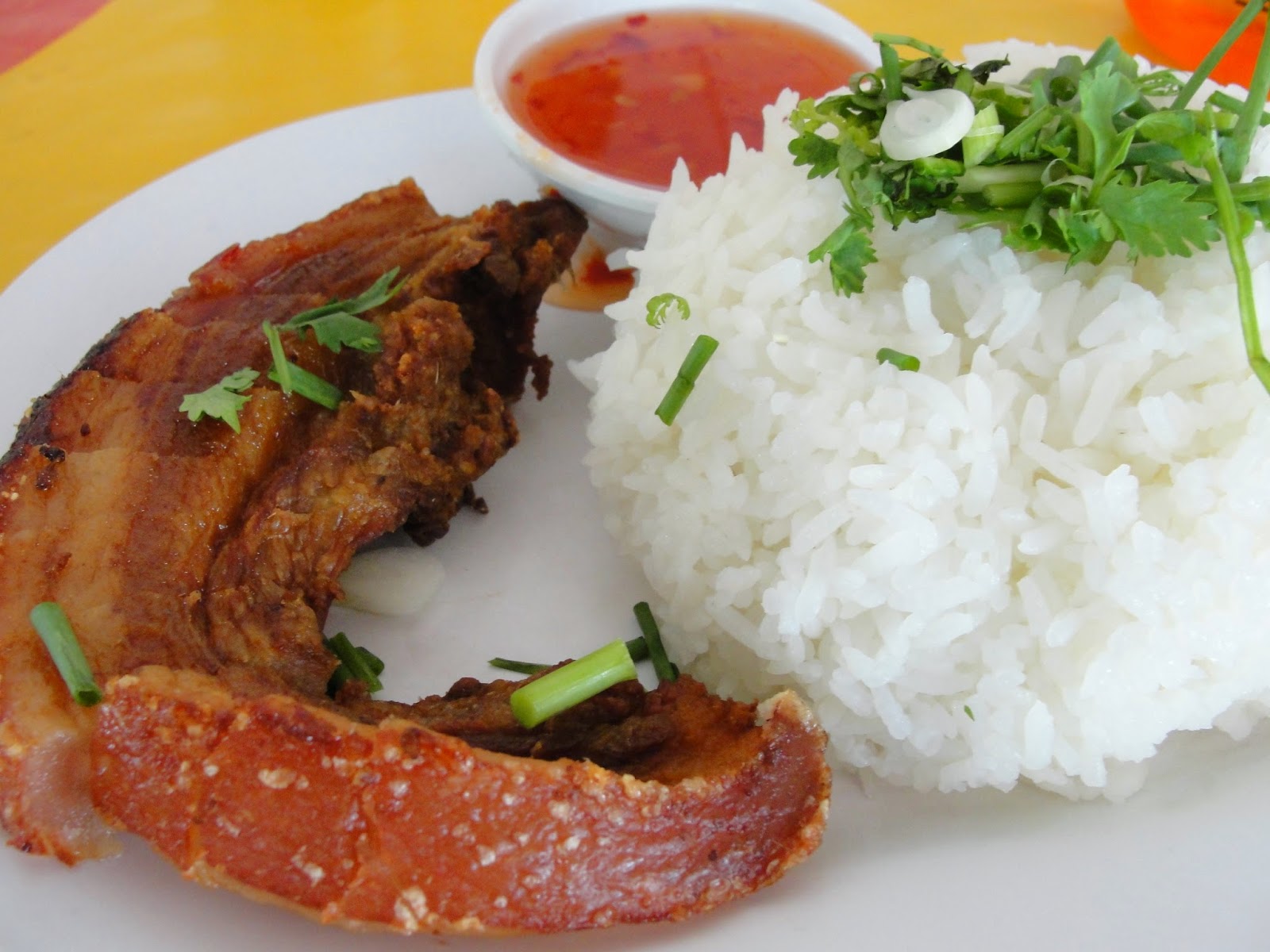 deep fried pork with rice
from the cafe next to COPE 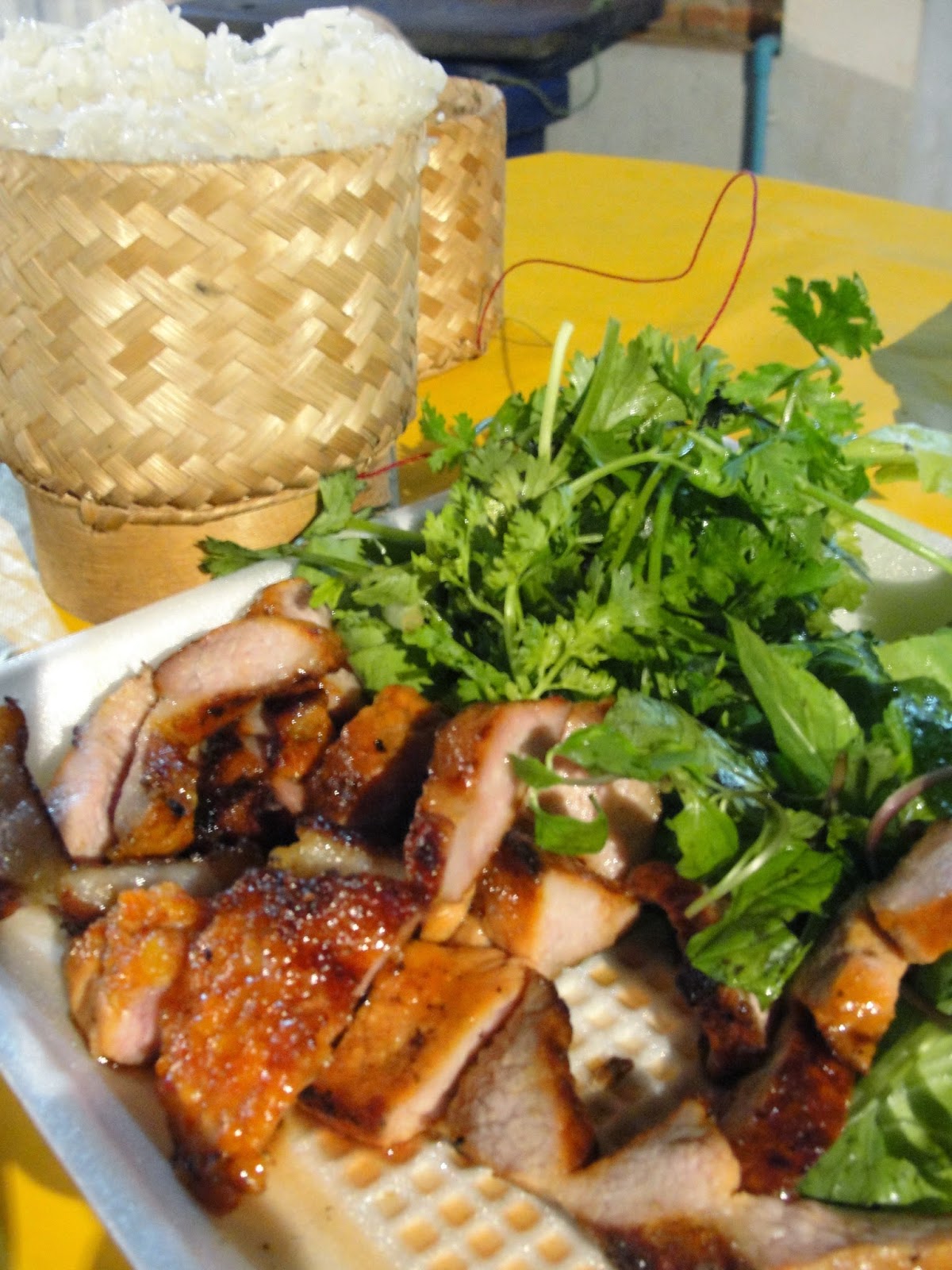 fried pork, greens and sticky rice
(a similar taste to bun cha without the broth)


Lodging notes: the Vientiane Star Hotel had working A/C, hot showers, decent breakfast options, and the cutest little well-behaved puppy. It also featured Pink Floyd and the Rolling Stones in constant rotation, so if that's your thing this is your place. 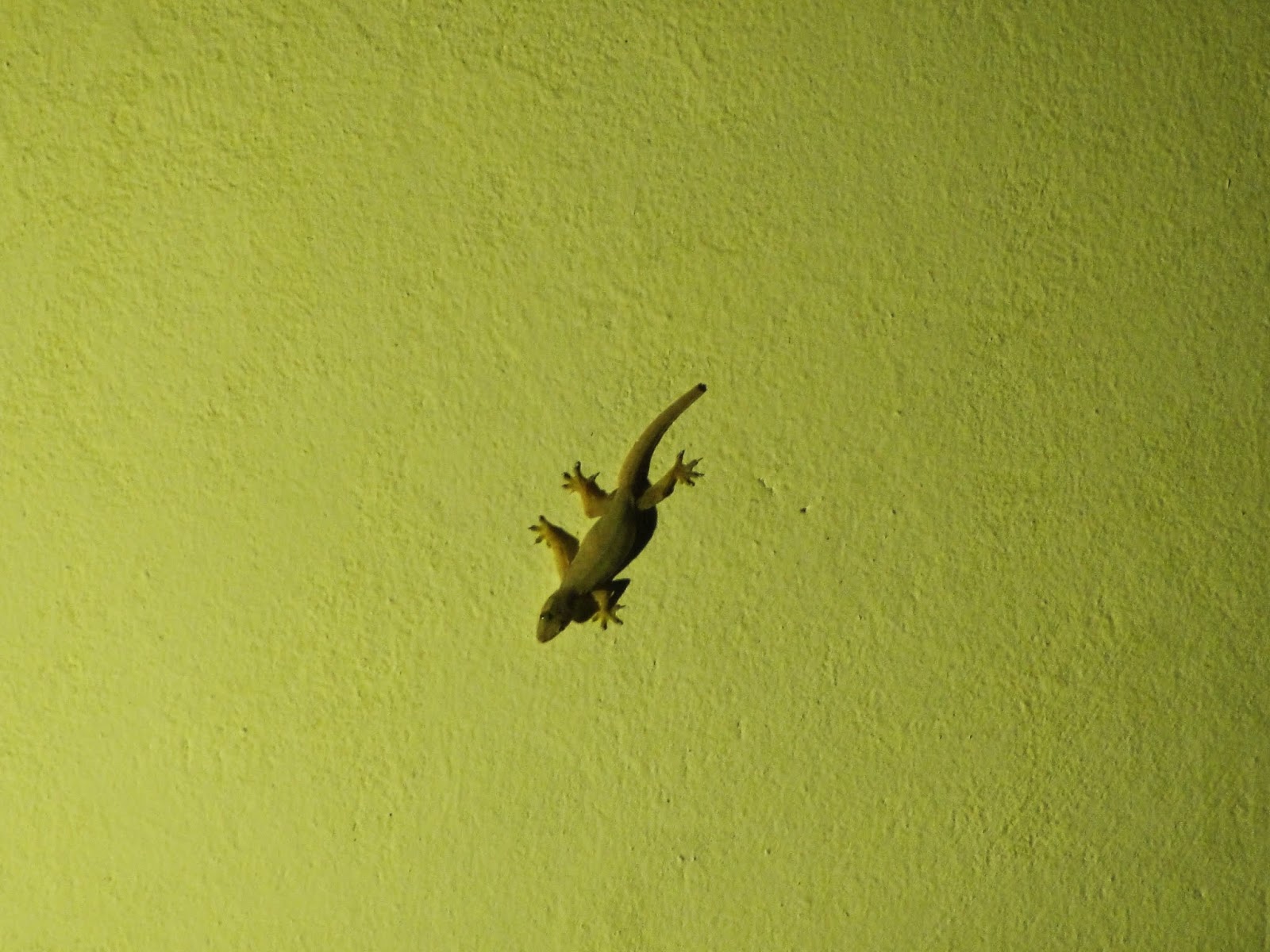 Vientiane may not have been our favorite city ever in the history of all cities, but it was definitely worth the time we spent there. Keep your expectations in check and try to avoid the really hot months and we're sure you will agree.

Next stop: Vang Vieng, home to beautiful karsts and the most amazing... um... tubing. Right!
Posted by Jen
Email ThisBlogThis!Share to TwitterShare to FacebookShare to Pinterest
Labels: asia, lao