Every-day-is-Friday five: How we (mostly) avoided tubing in Vang Vieng.

Once upon a time there were youthful travelers who ventured to Vang Vieng to tube their way down the Nam Song River, stopping off at bar after bar after bar, stumbling up the dock to their bungalow to drink and talk and laugh until they passed out. (Also, sometimes opium was involved. Neat!) Lather, rinse, repeat.

An unknown number of local complaints, alcohol-related deaths, and reported cases of conjunctivitis later, all but four of the bars along the tubing route have been shut down and Vang Vieng is not the party town it used to be.

What a bummer! We were so looking forward to sitting in stagnant water for hours, dehydrating ourselves while getting wicked sunburns, and taking antibiotics for weeks!

Luckily, there are plenty of other things to do in Vang Vieng - at least five, in fact. In no particular order, you can...

1. Watch the Bun Bang Fei festival at the start of the rainy season. Okay, we didn't really plan this, we just happened to show up the day before the festival. But it was fun to watch the pickups roll through town with their decorated rockets, and it was really cool to see how the locals shot the rockets. The show started at 2pm and rockets went off every 10-15 minutes until at least 5pm, with everyone standing in the river watching because temperatures must have reached 105F that day. 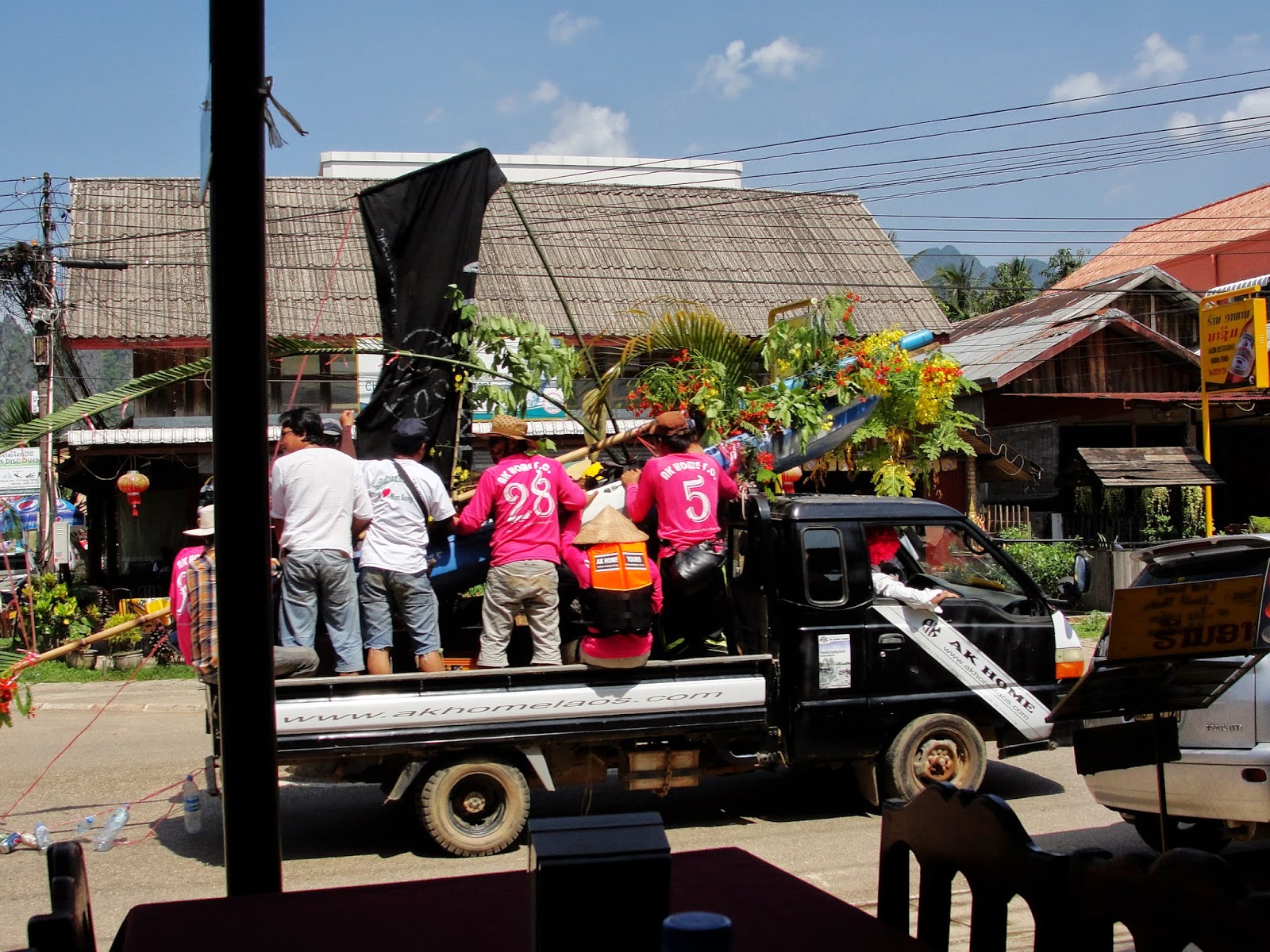 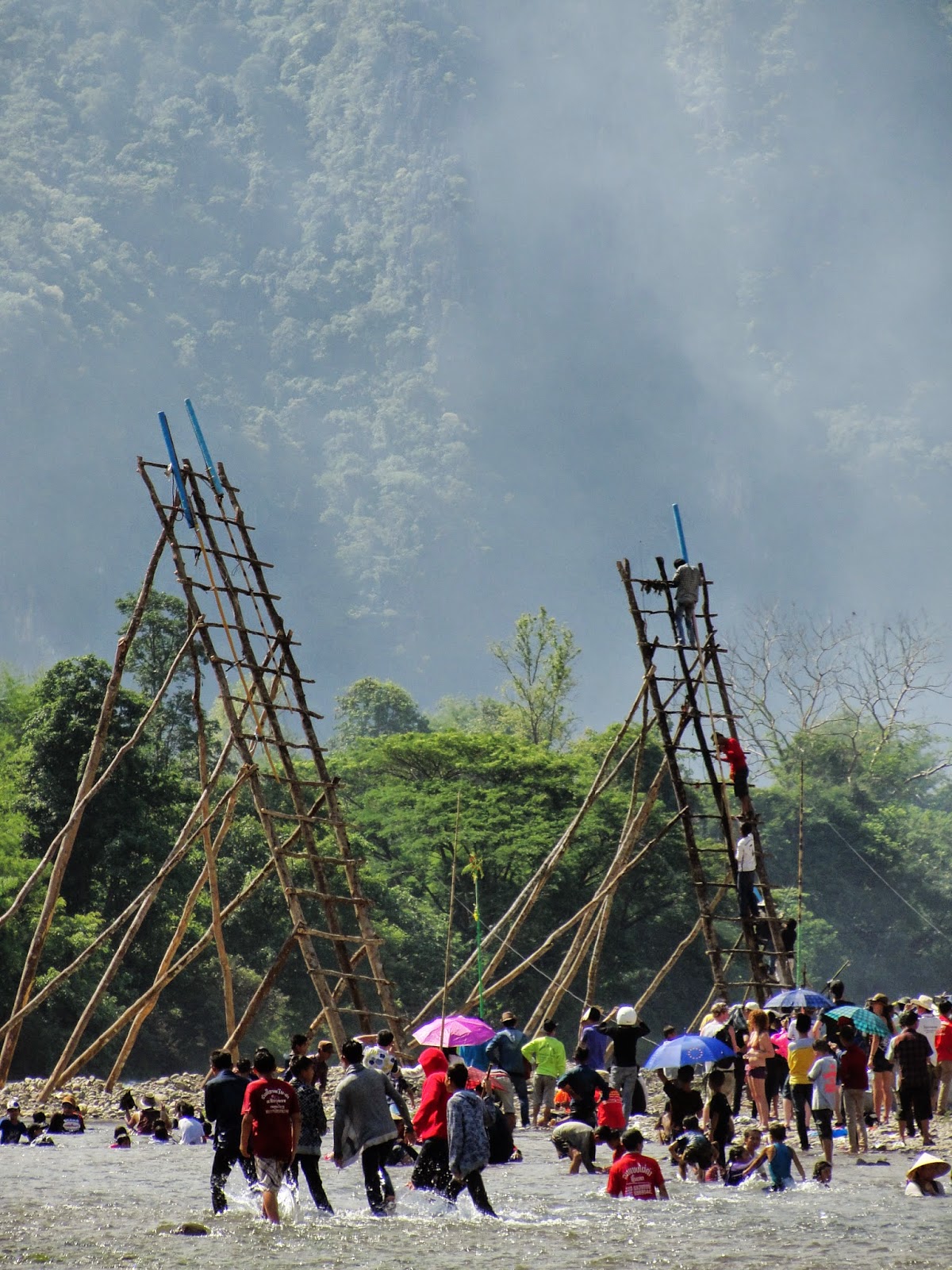 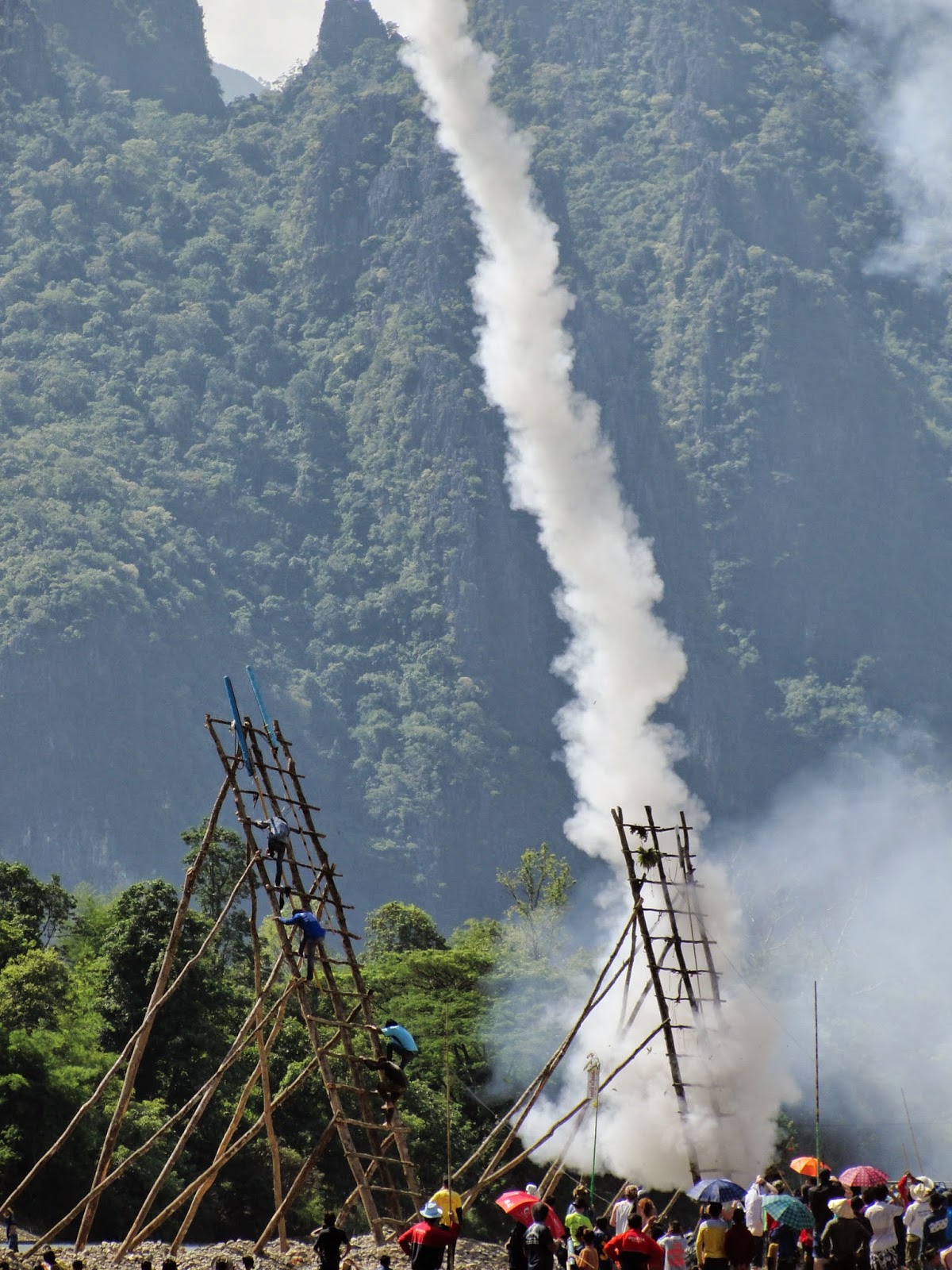 (Never mind that the rocket trajectory was directly over our bungalow and there were probably a dozen forest fires as a result of the festivities. To the rainy season!)

2. Go kayaking with VLT. We shopped around a little, including talking with the highly recommended Green Discovery, and we liked VLT's itinerary better because it had more time kayaking on the quiet part of the river before joining up with the normal tubing route. It was also cheaper and still included the water and elephant caves. 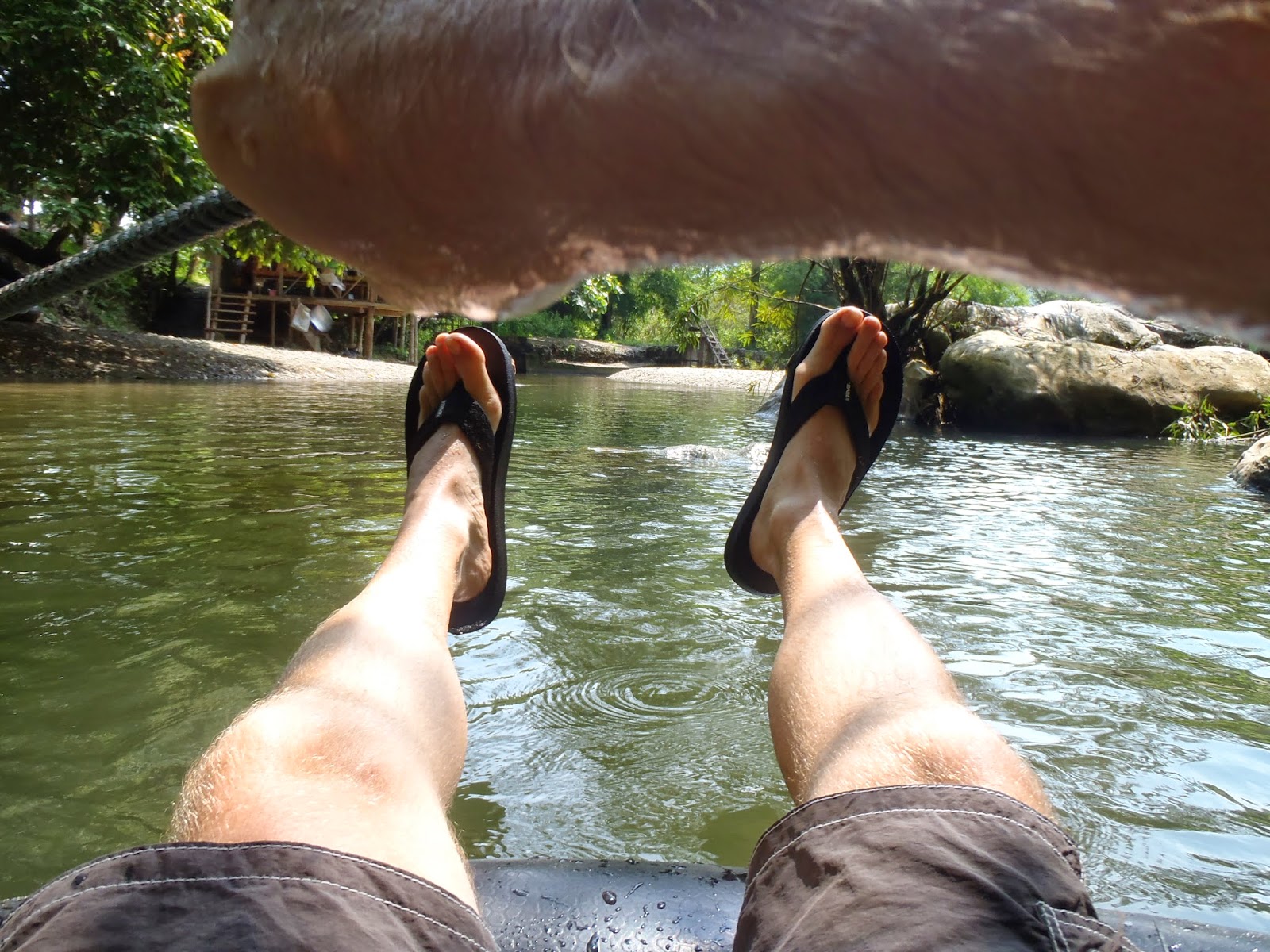 our only tubing in Vang Vieng
(the water cave) 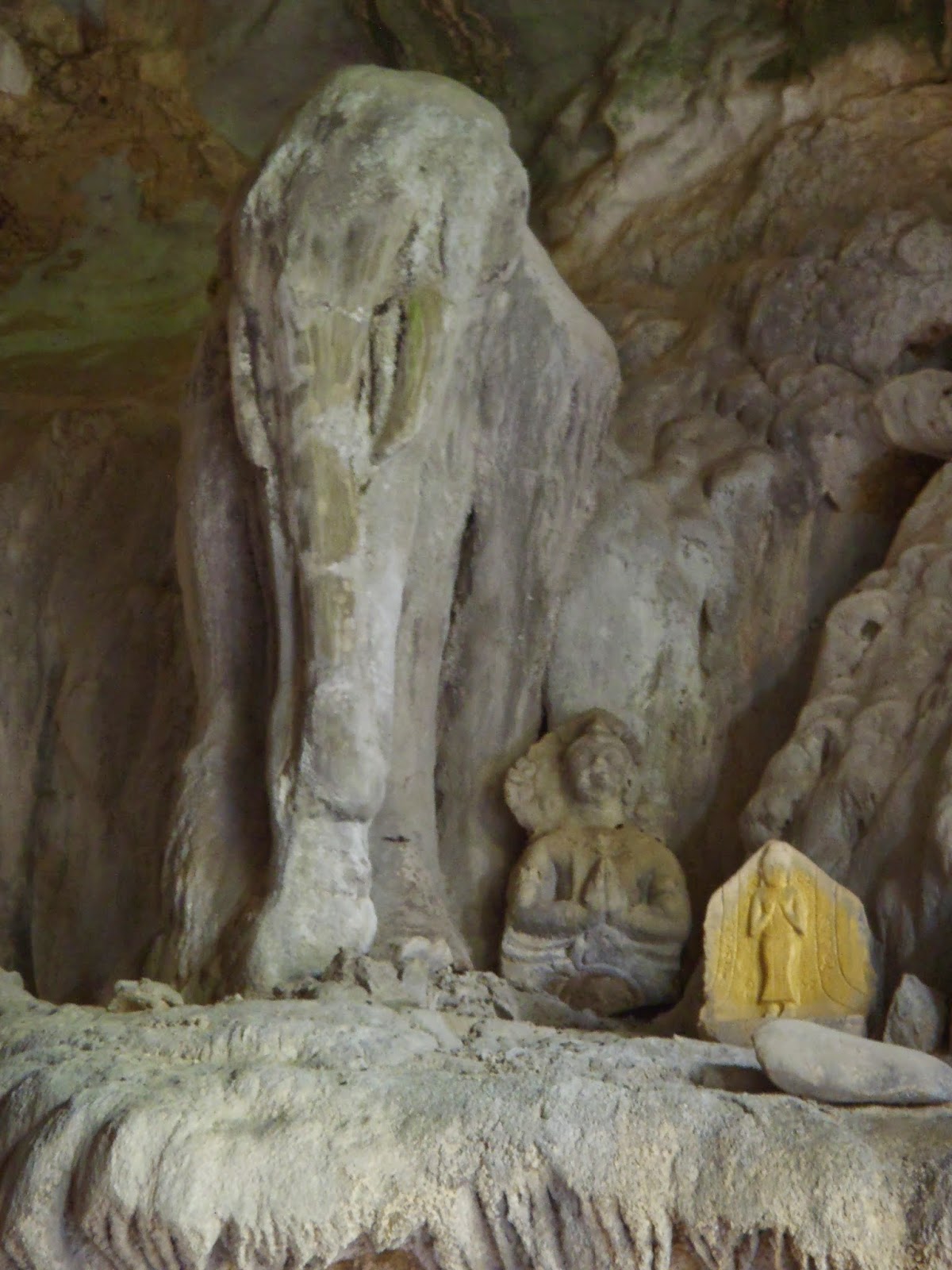 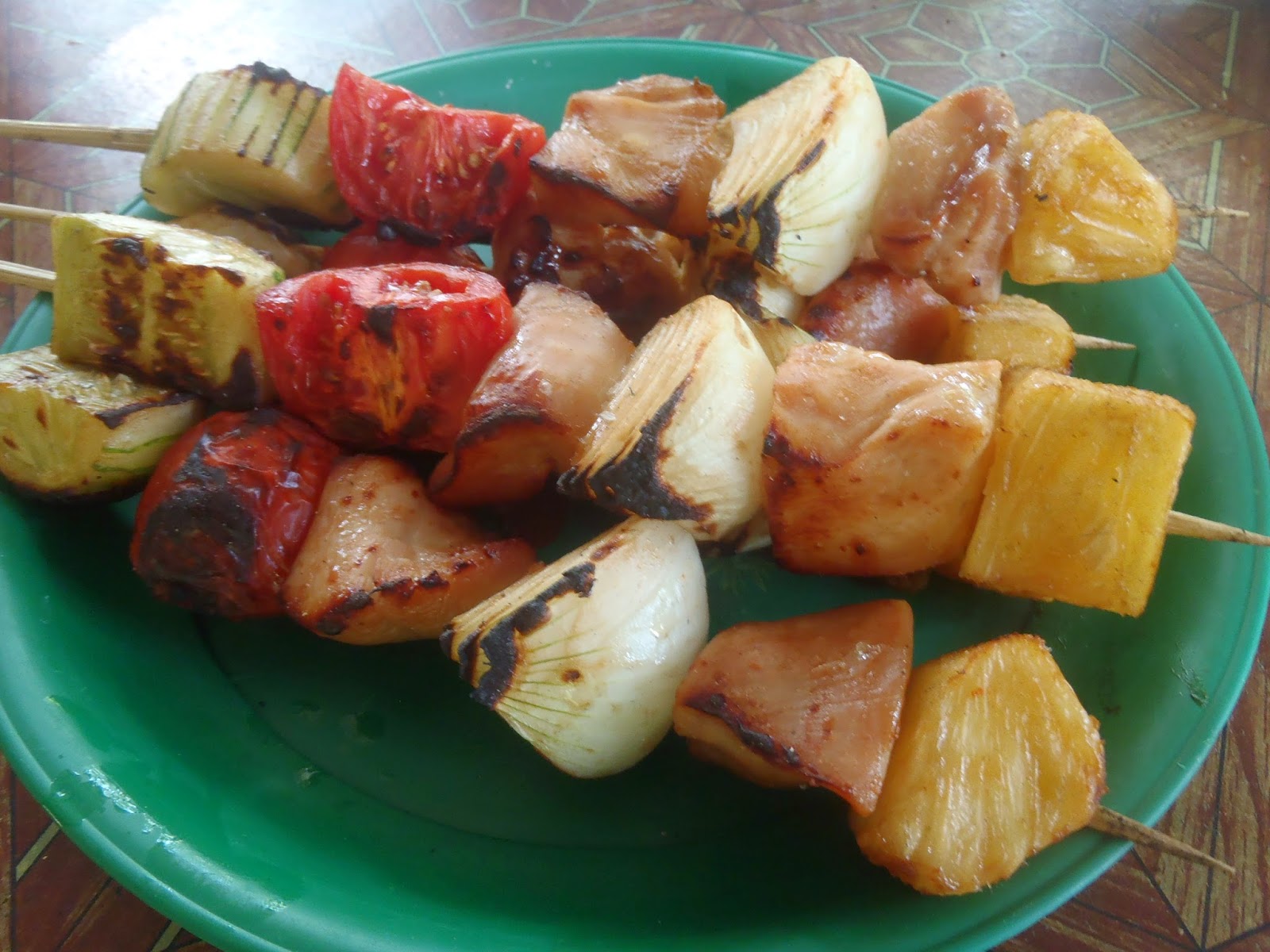 nicest tour lunch we've had in a long time

Our guide was awesome (especially considering he'd partaken in the Bun Bang Fei festivities the day before), and every inch of the river up until the part where we joined up with the tubing route was peaceful and gorgeous. It may have been our longest one-day kayak trip at 25km, and it even featured some class 1 and 2 rapids, which none of us had kayaked before. Super fun! 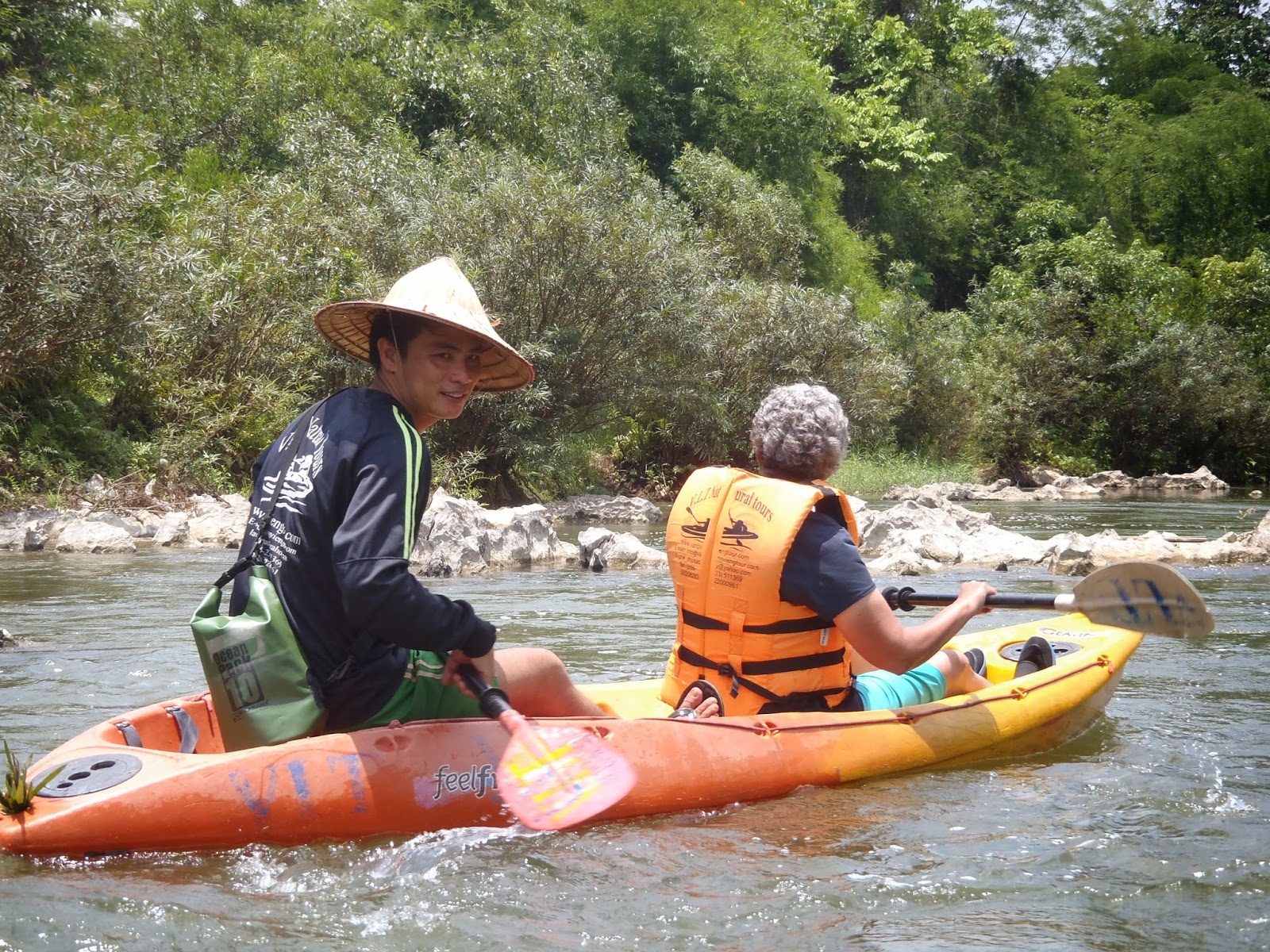 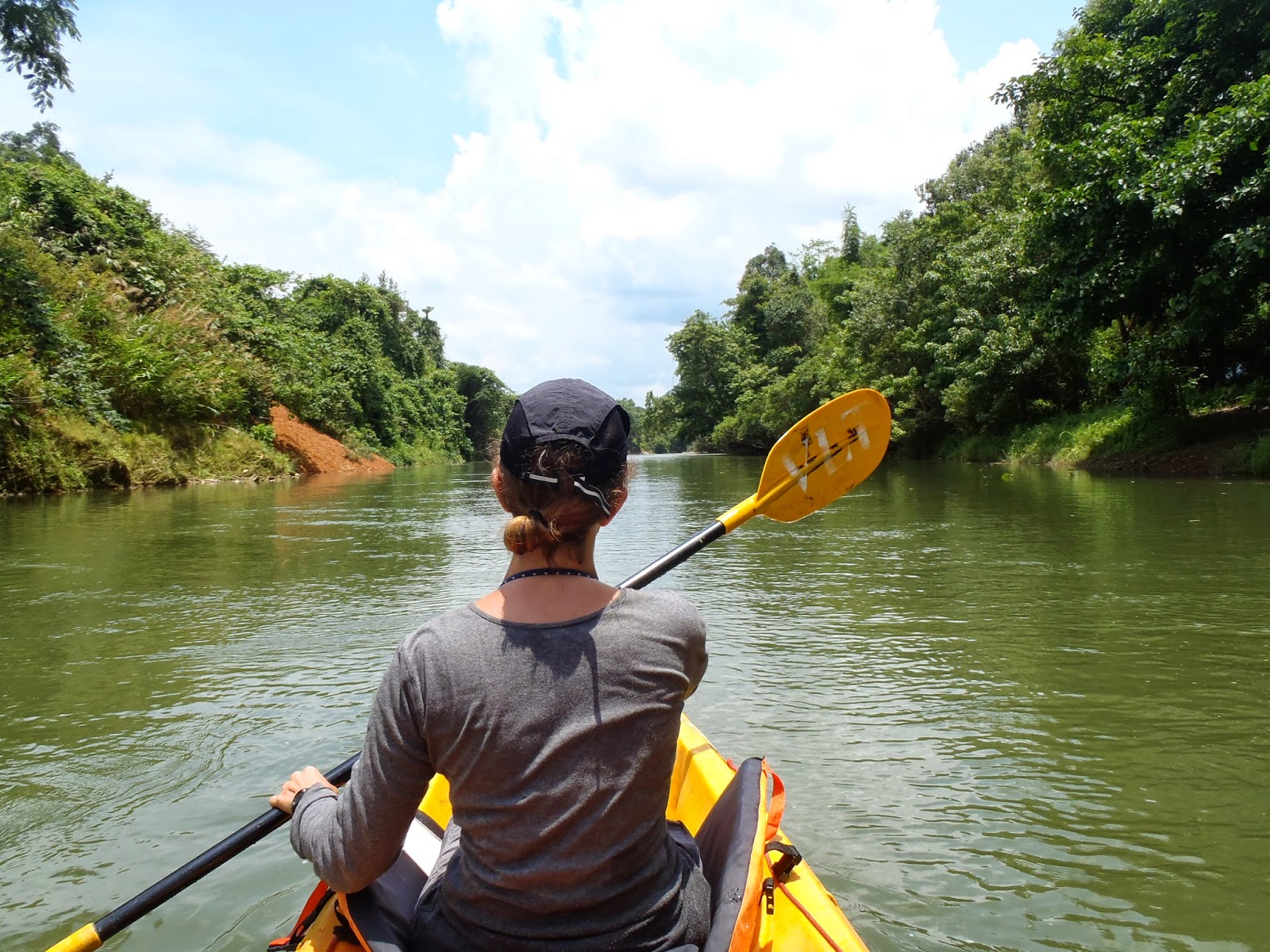 first time in an open kayak too
(really comfortable, just needs something you can lean back on) 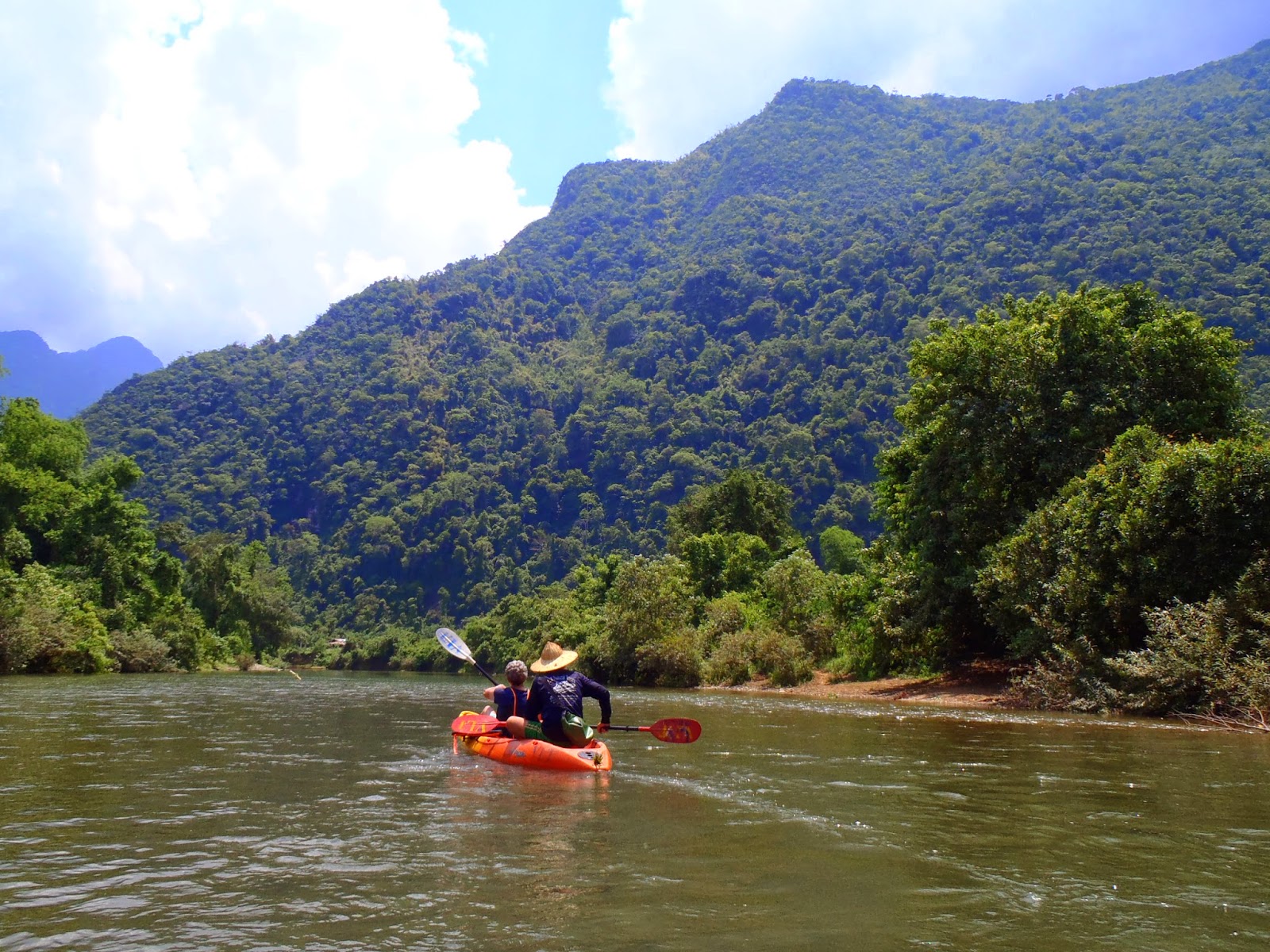 karsts and jungle and river, oh my 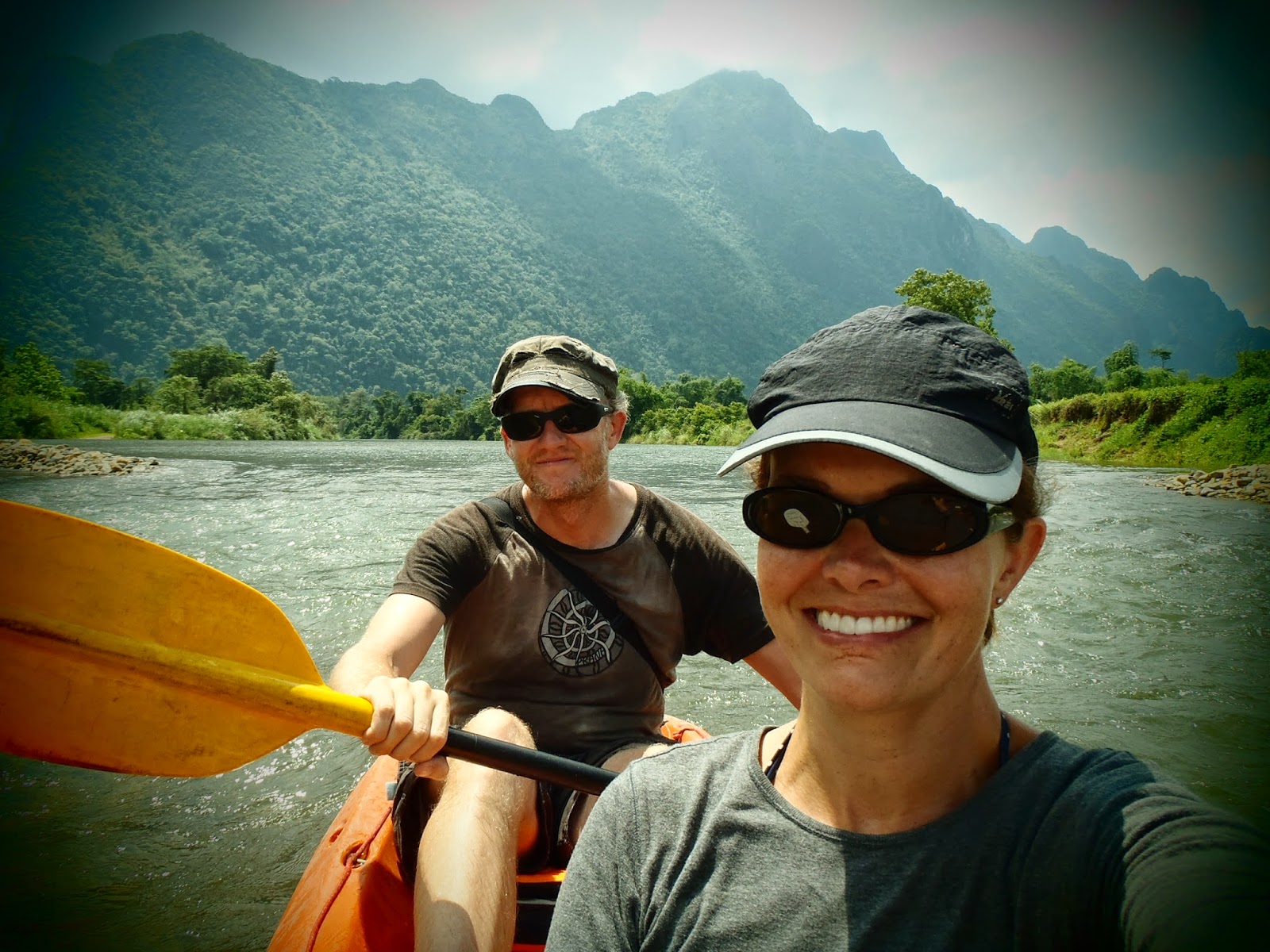 The best part may have been cruising past the tubers looking fairly miserable as they sat in their stagnant water on the last stretch. Ahhhhhh, youth.

3. Enjoy the early evening thunderstorms. We saw three amazing ones while we were there - huge lightning, giant thunder claps, power outages, sheets of rain - and at least one good rainbow. 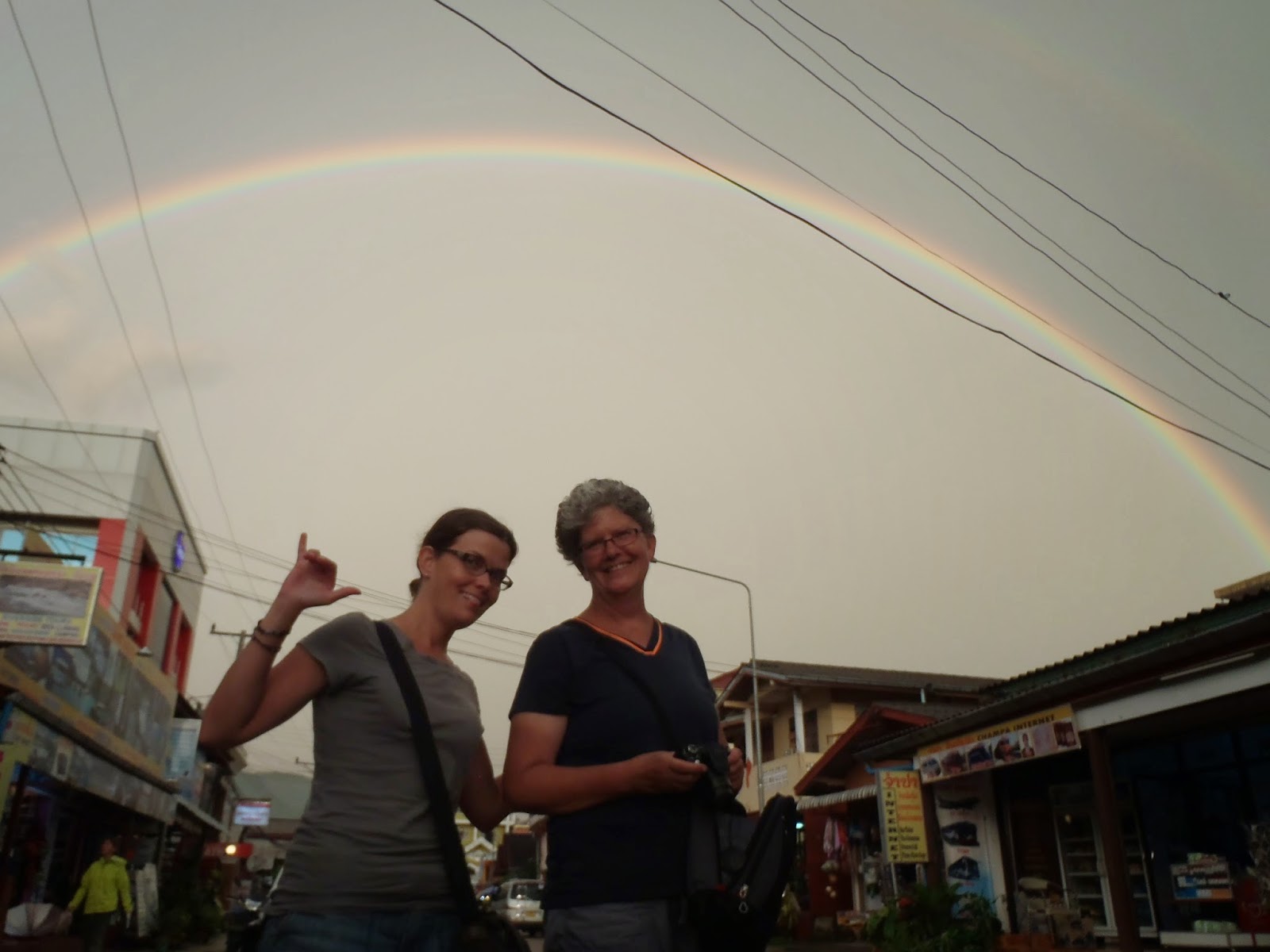 we don't need no stinkin' pot of gold

4. Go for a bike ride. We sandwiched a ride in between late breakfast and the rocket launches one day, so we didn't go too far - just up the road to the organic mulberry farm - but there are tons of bike routes around town, and hobomaps will also tell you where to go. 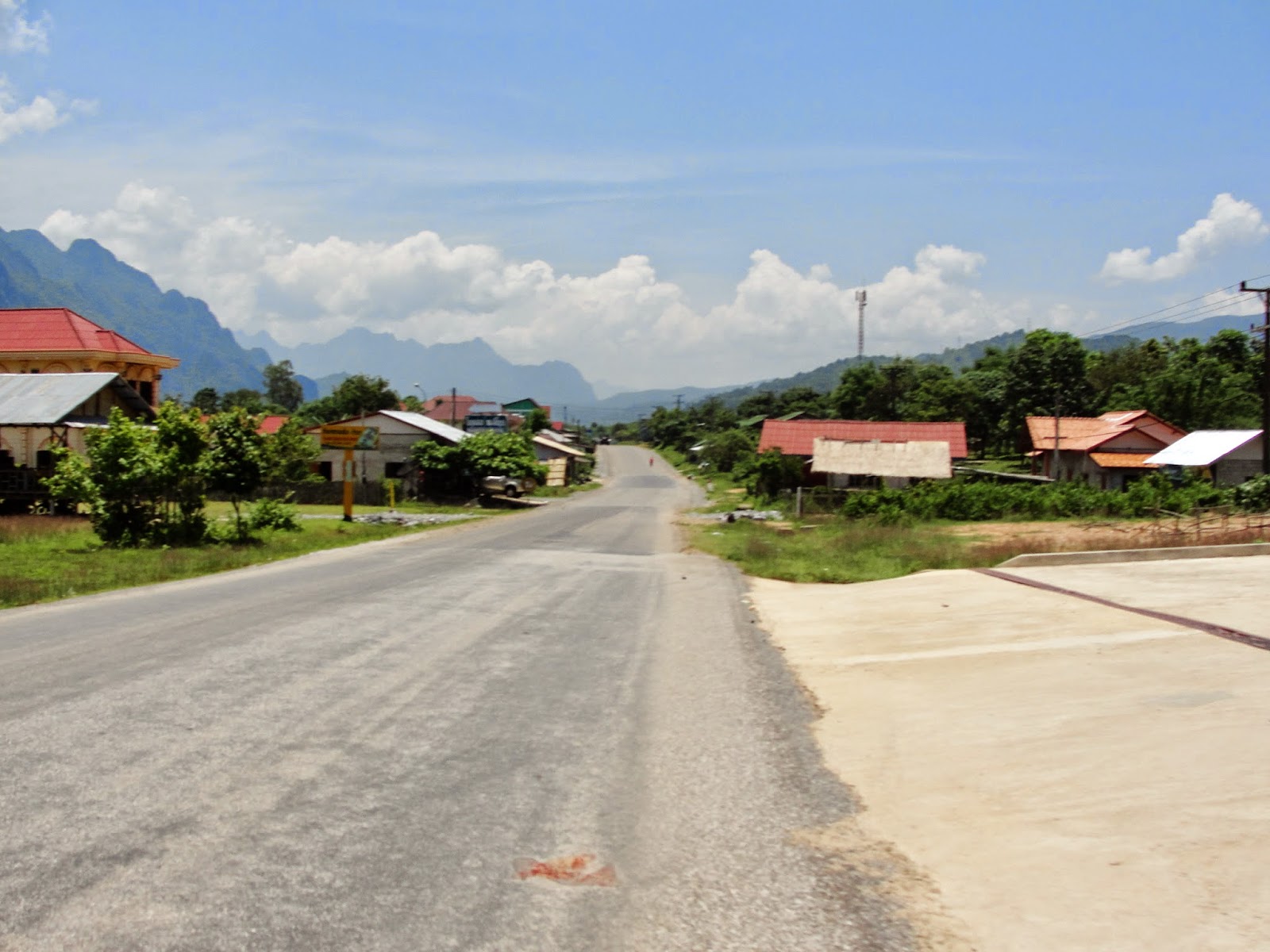 quiet stretches of road
in between beautiful mountain ranges 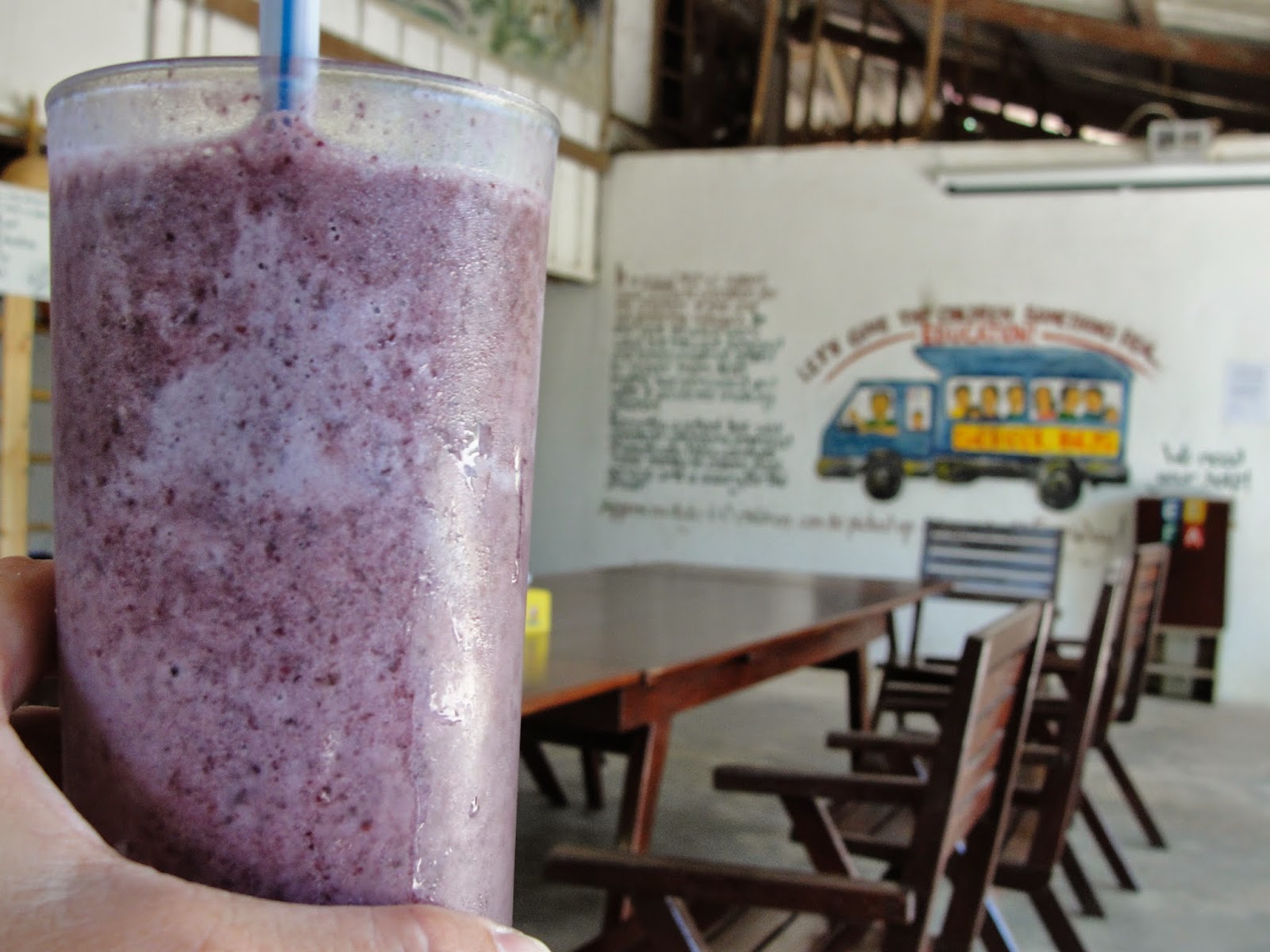 with a fresh mulberry shake as a reward

Watch for bike scams - we were sent off with two holey tires and the guy tried to make us pay for the tires when we brought them back flat.

There are also lots of hikes in the area; we ran out of time and energy and patience with the 105F temps so we didn't try any of those. Hobomaps lists those too.

5. Stare out your back window. 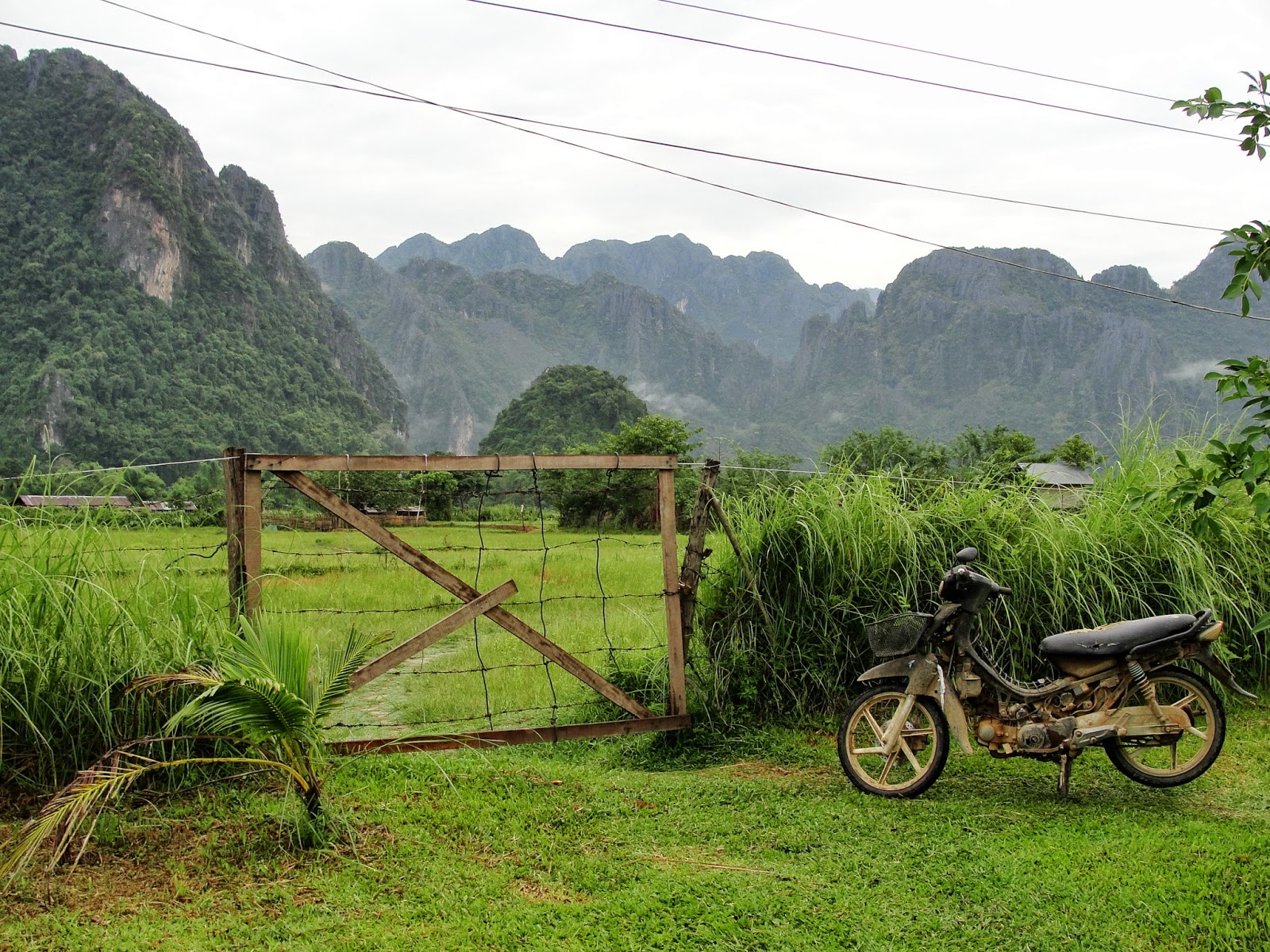 the views are quite nice 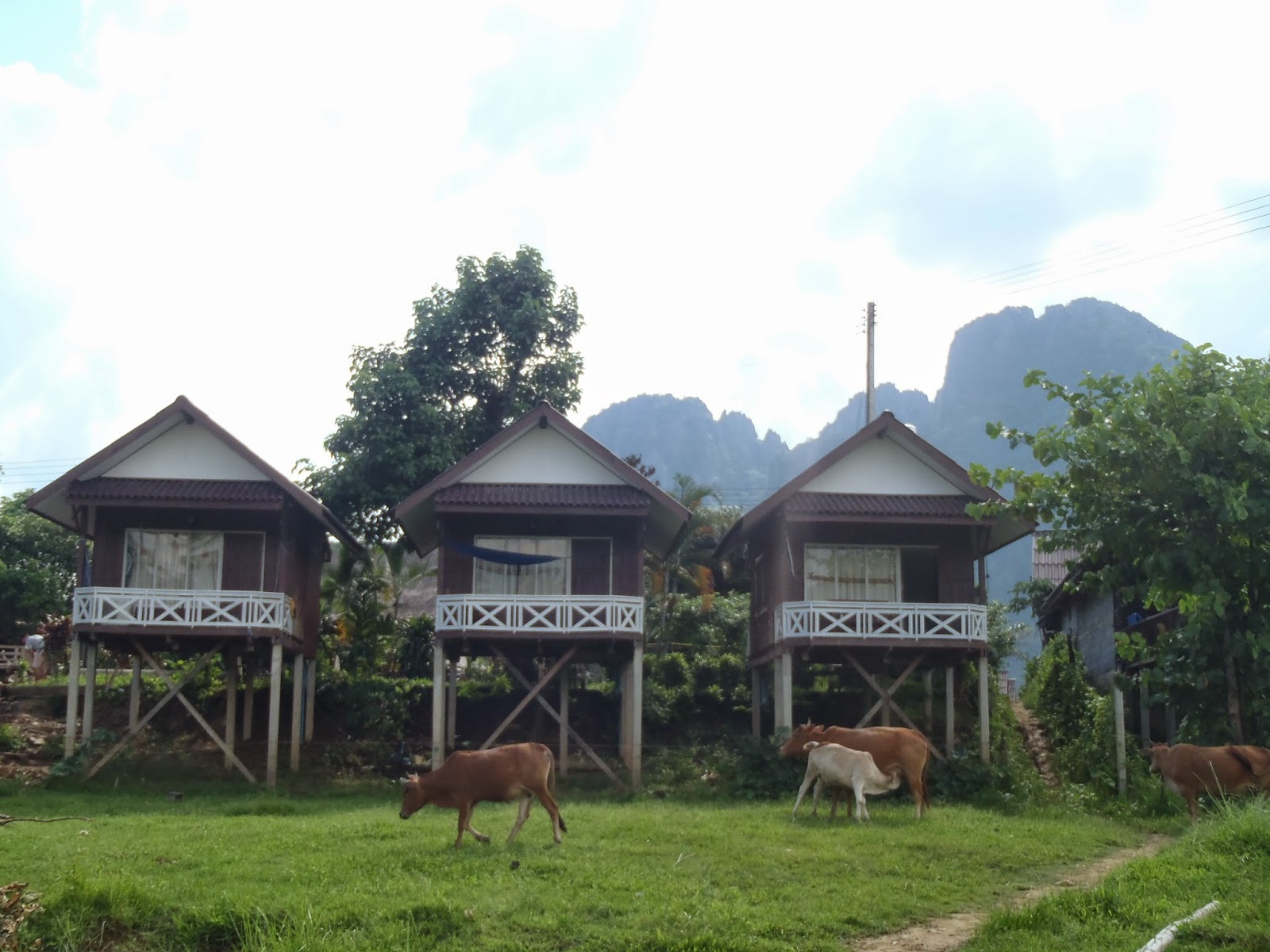 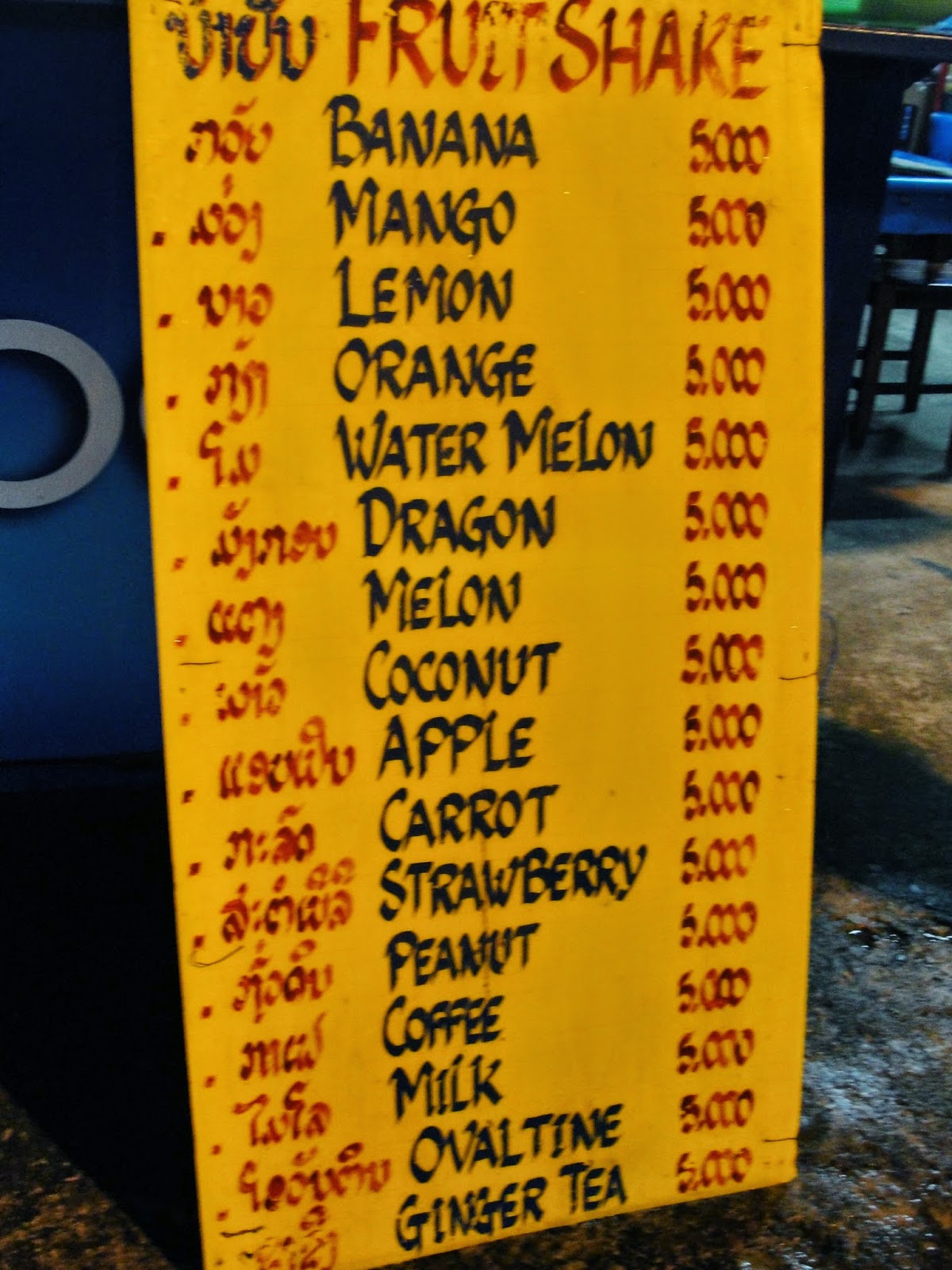 our daily habit
(better than opium?) 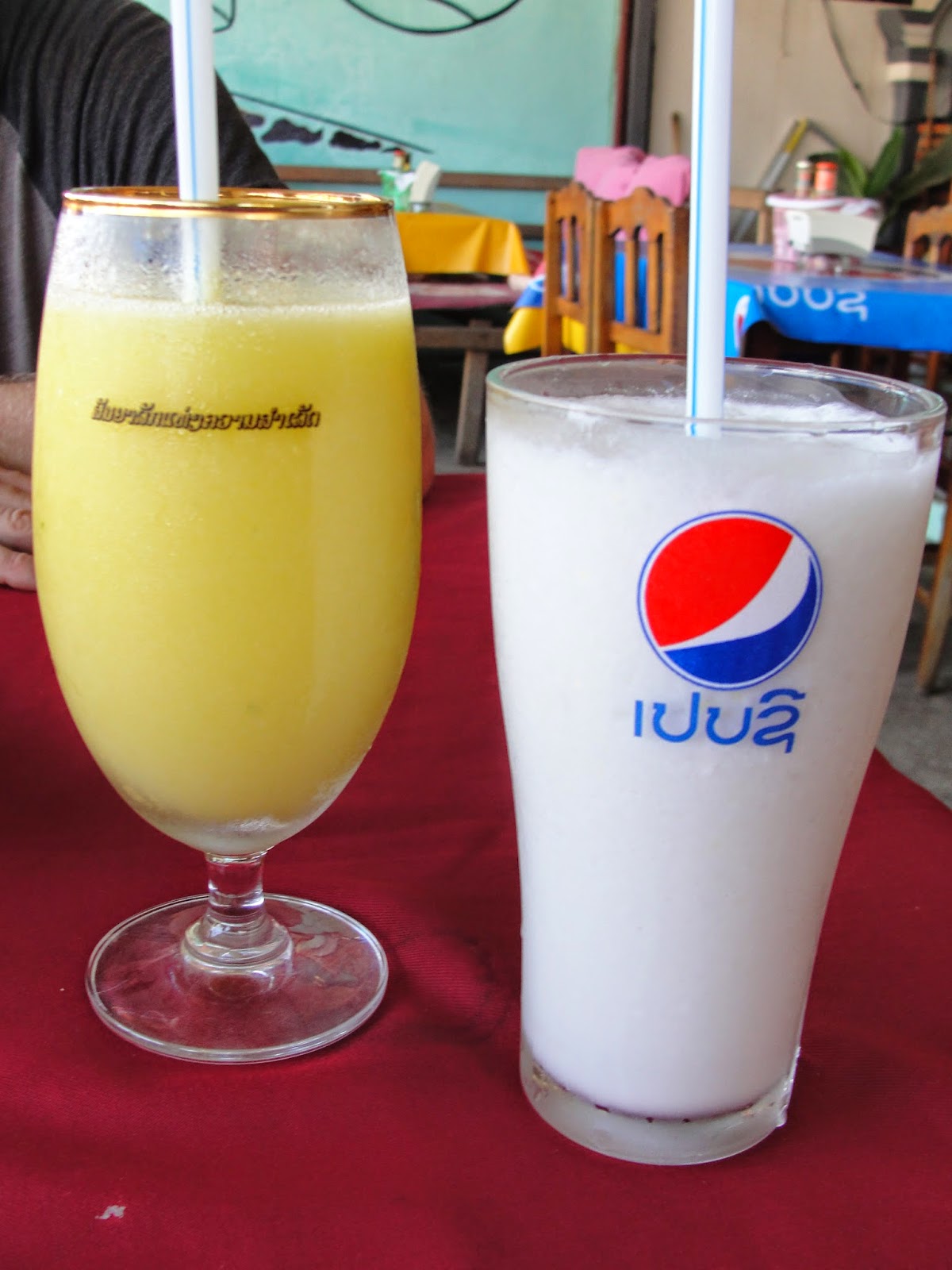 mango and coconut are the new bulleit and bulleit rye 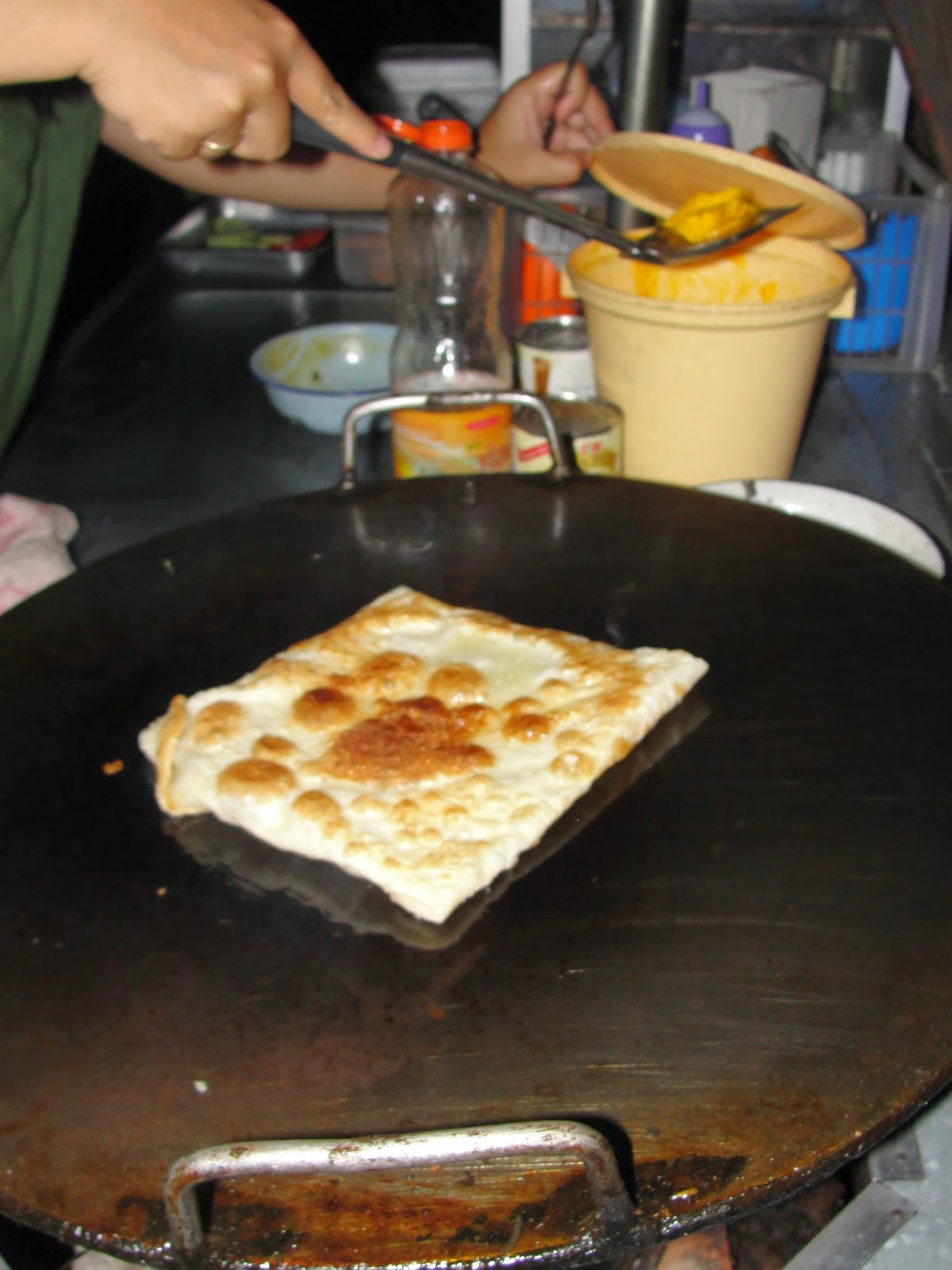 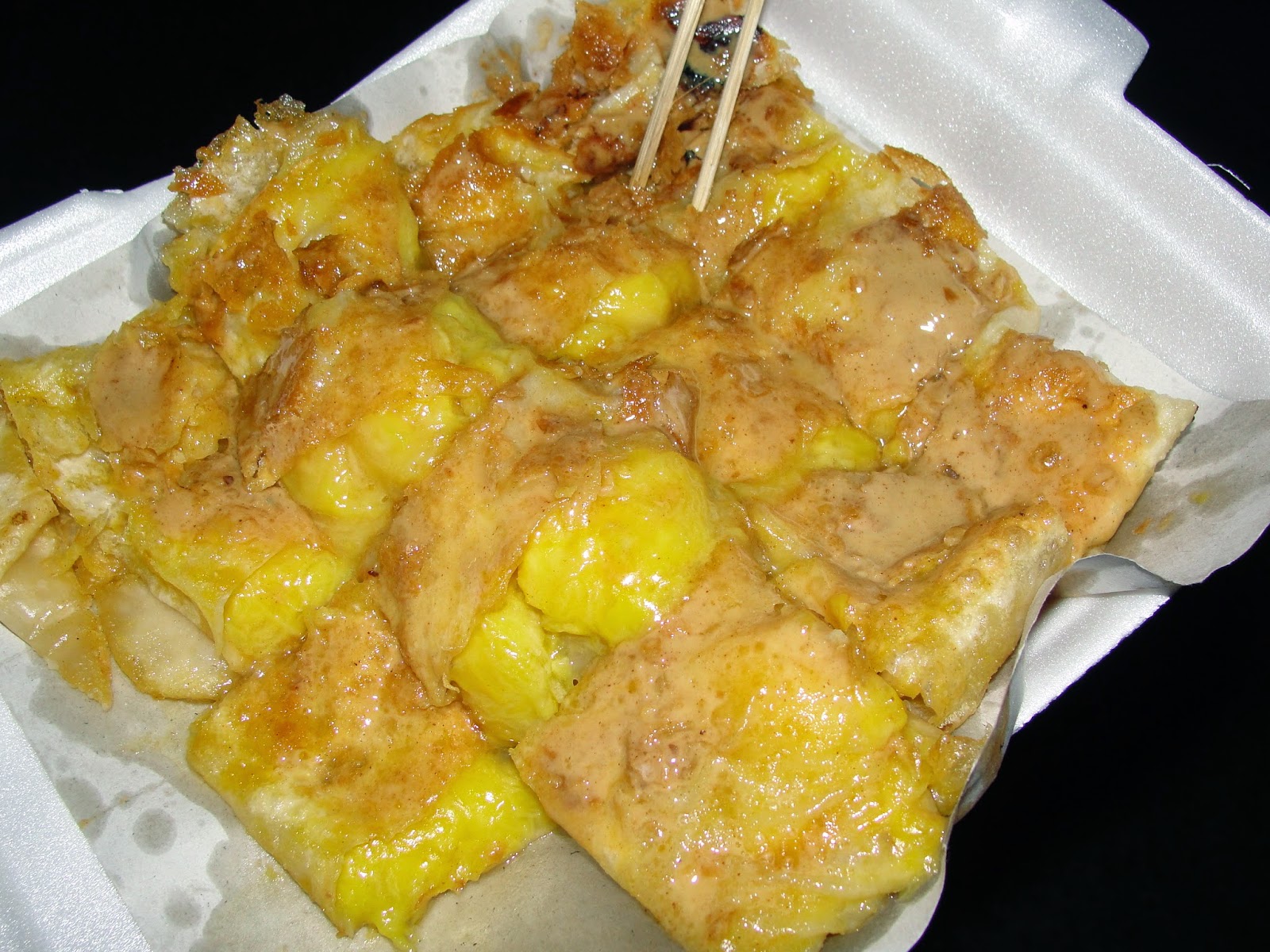 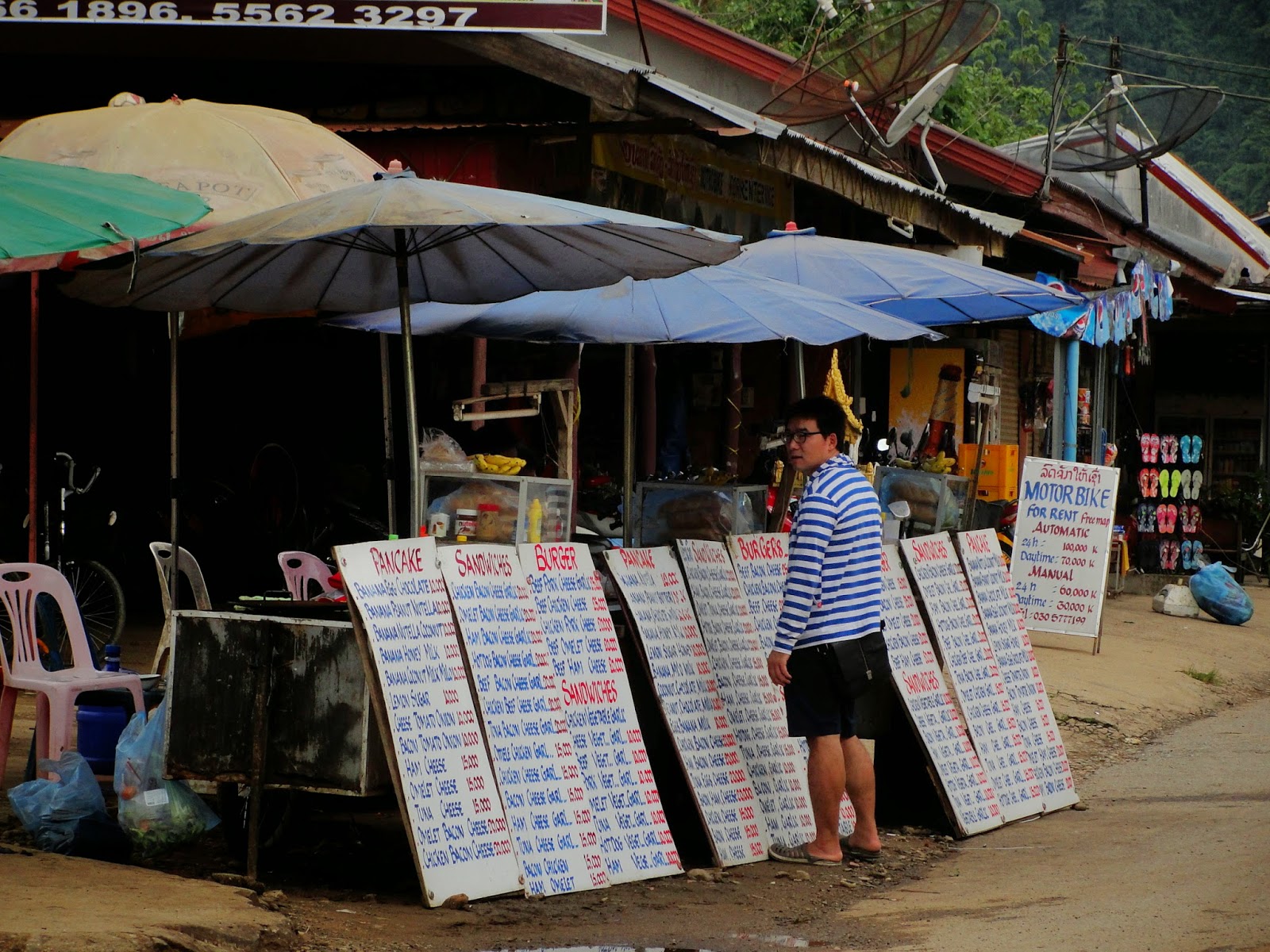 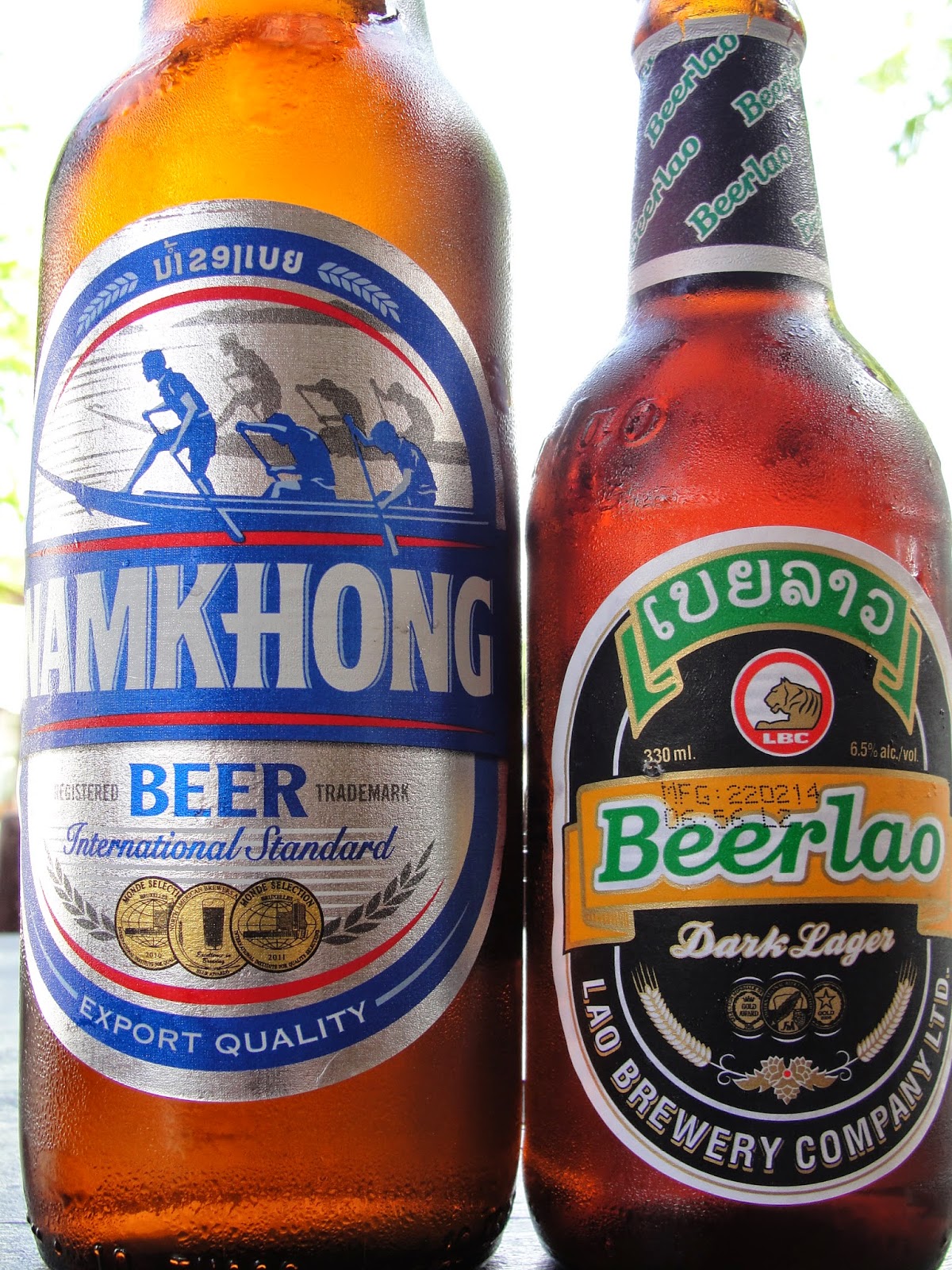 juuuuust as tasty as the old beer! 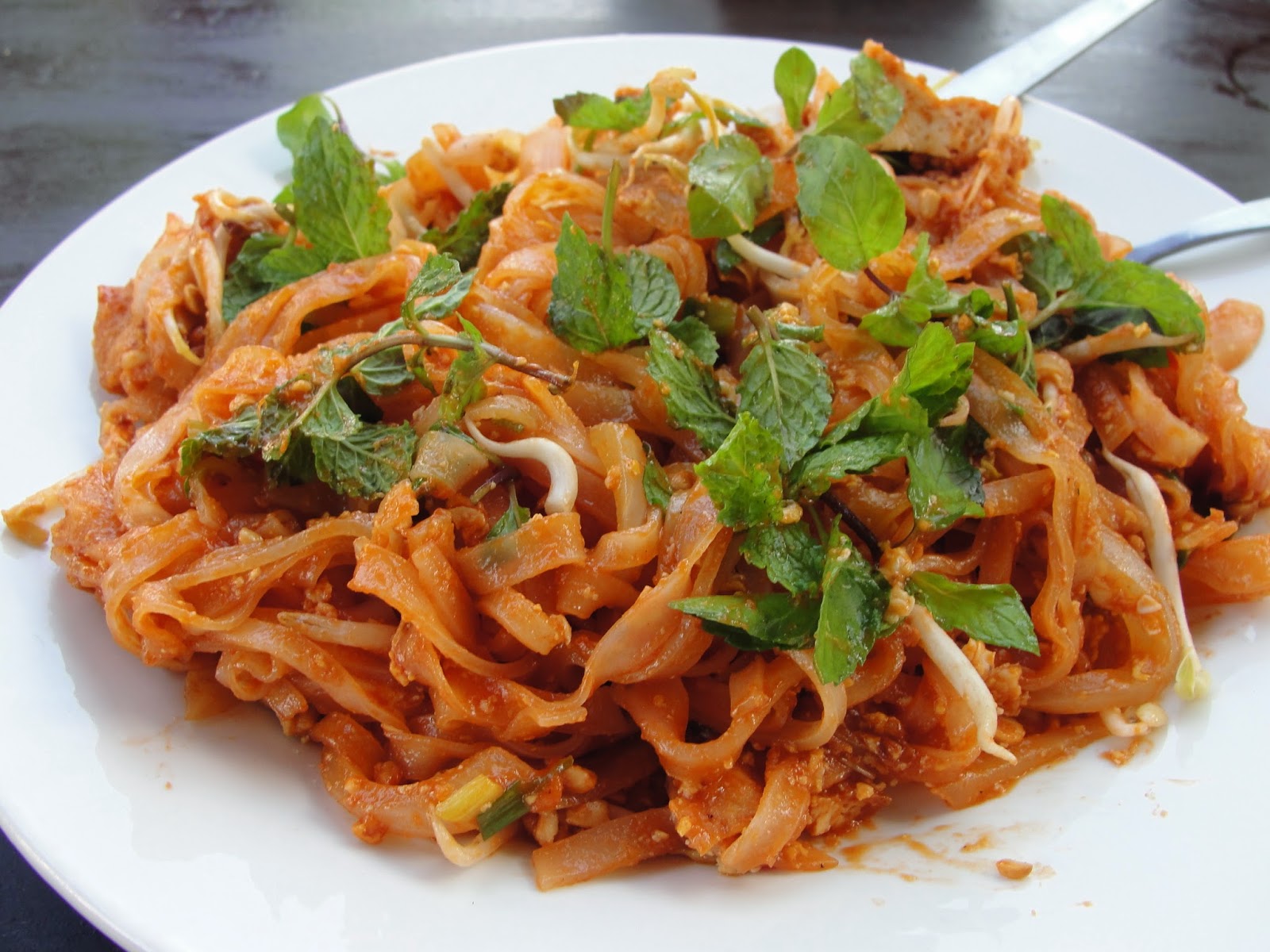 not too spicy, but tasty 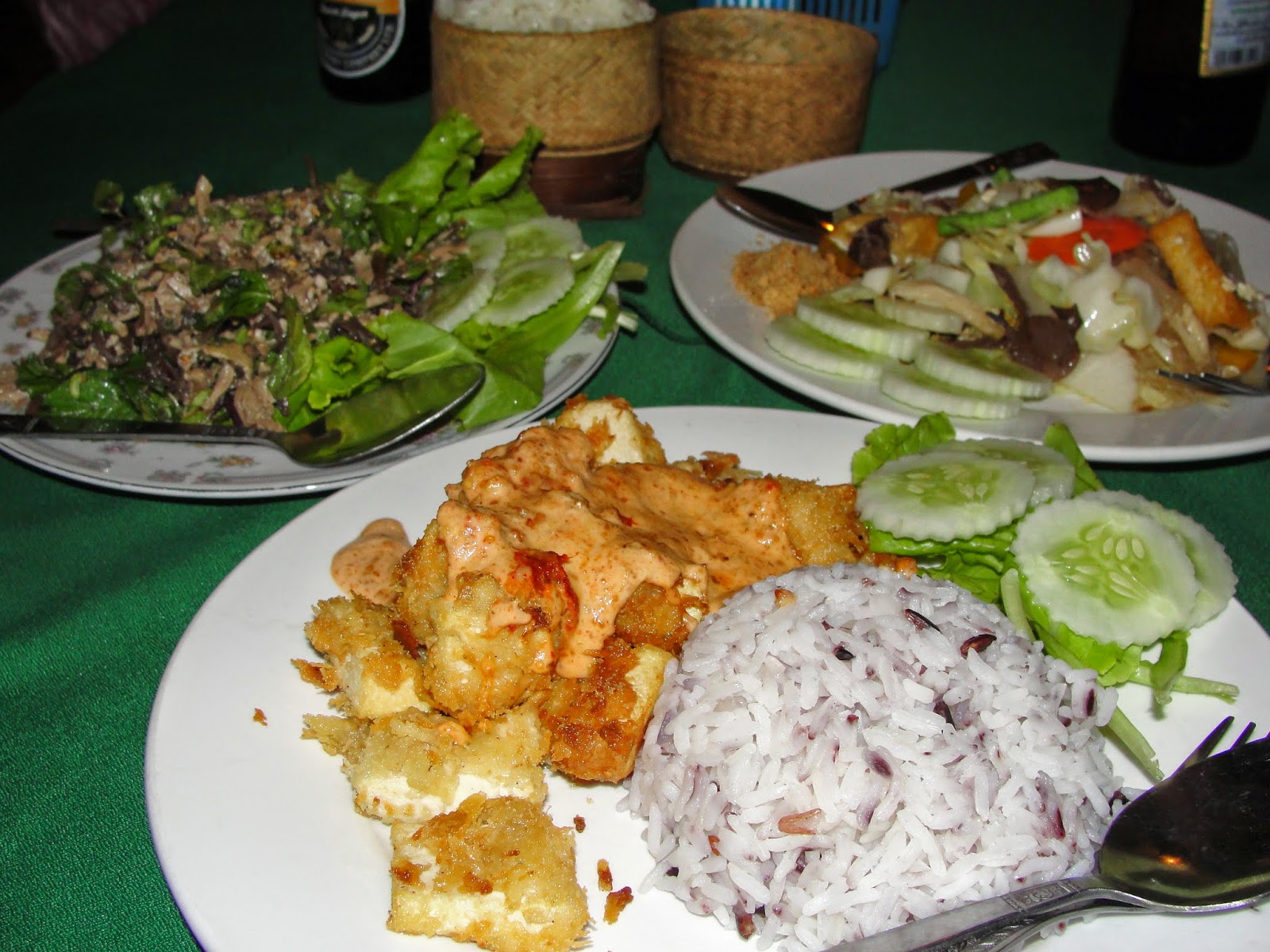 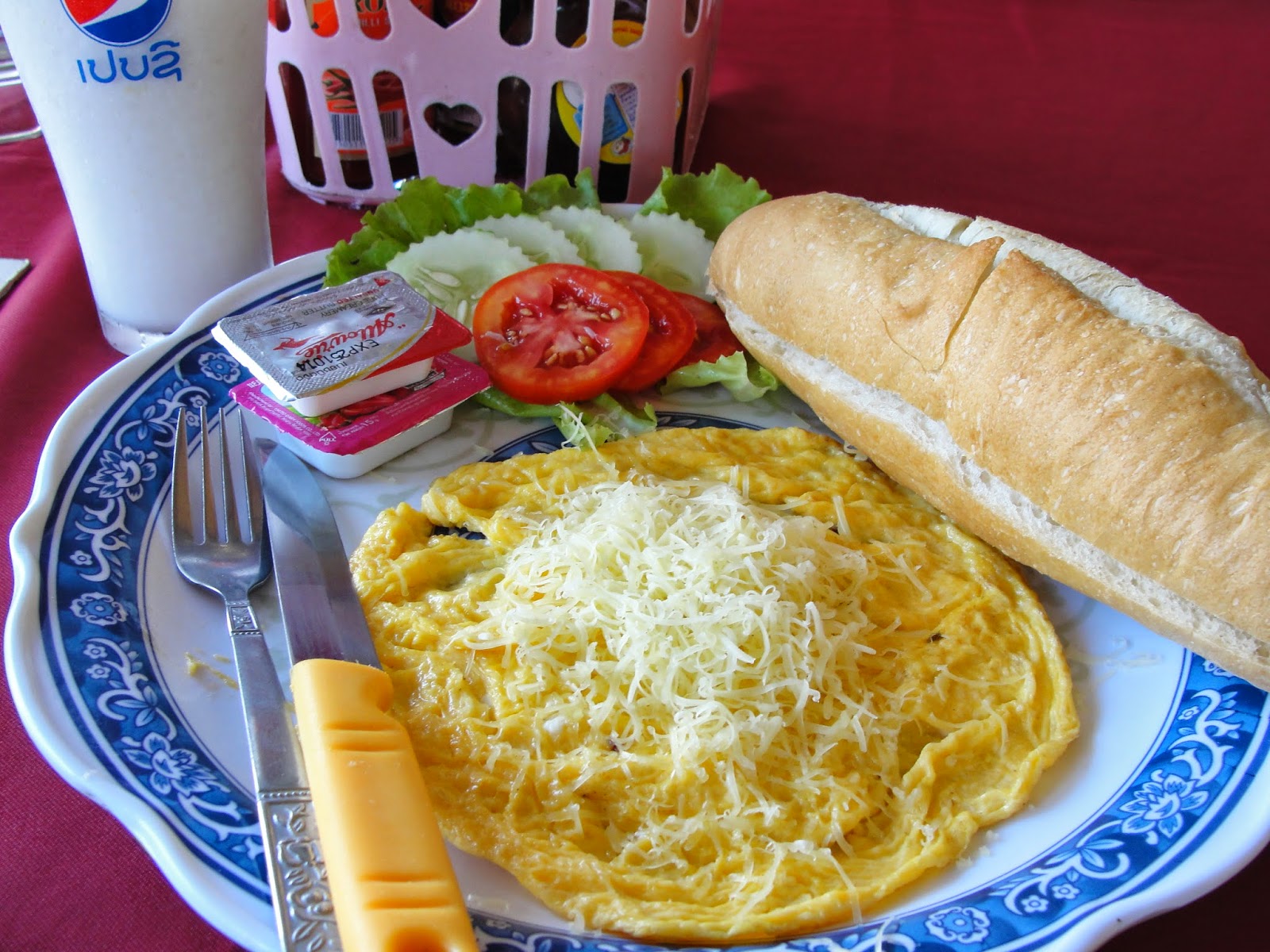 Lodging notes: Banana Bungalow was across the river from the main strip so we thought it would be quieter. Aside from some loud guests the first night, we were right. We opted for the bungalow with shared bath; the room was a bit hot but fine otherwise, and everything was kept really clean. And? Free coffee. For $5 a night we really can't complain. 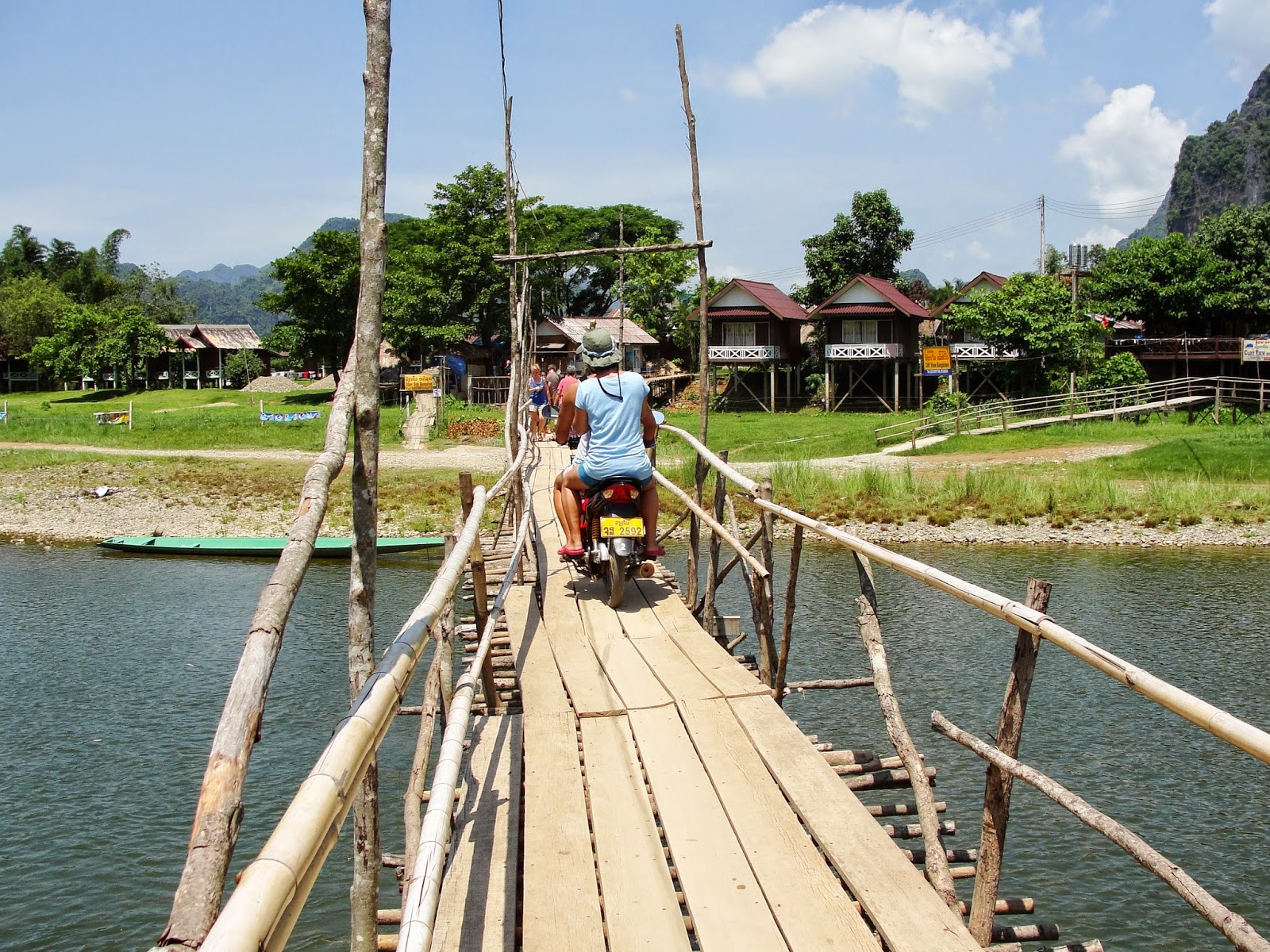 you do have to cross this bridge to get there, though

So Vang Vieng wasn't what we expected, but that was a good thing. We all probably could've spent another three days just staring at the mountains or hiking around, but Kim's time is getting short! Luang Prabang, here we come...
Posted by Jen
Email ThisBlogThis!Share to TwitterShare to FacebookShare to Pinterest
Labels: asia, Friday five, lao