It's known as some of the most dramatic scenery in Indochina, and now that we've spent almost a week staring at the giant karsts we can see why.

We didn't mean to spend almost a week there, but after a few days we'd (mostly) recovered from the great food poisoning debacle of May 2014 only to learn that our Habitat Thailand build might be redirected. Rather than plow on to Thailand as planned, we figured we would wait and see if we needed to get to Sri Lanka, the Philippines, or Cambodia in the near future as those would require a serious backtrack to Vientiane instead of forward motion. 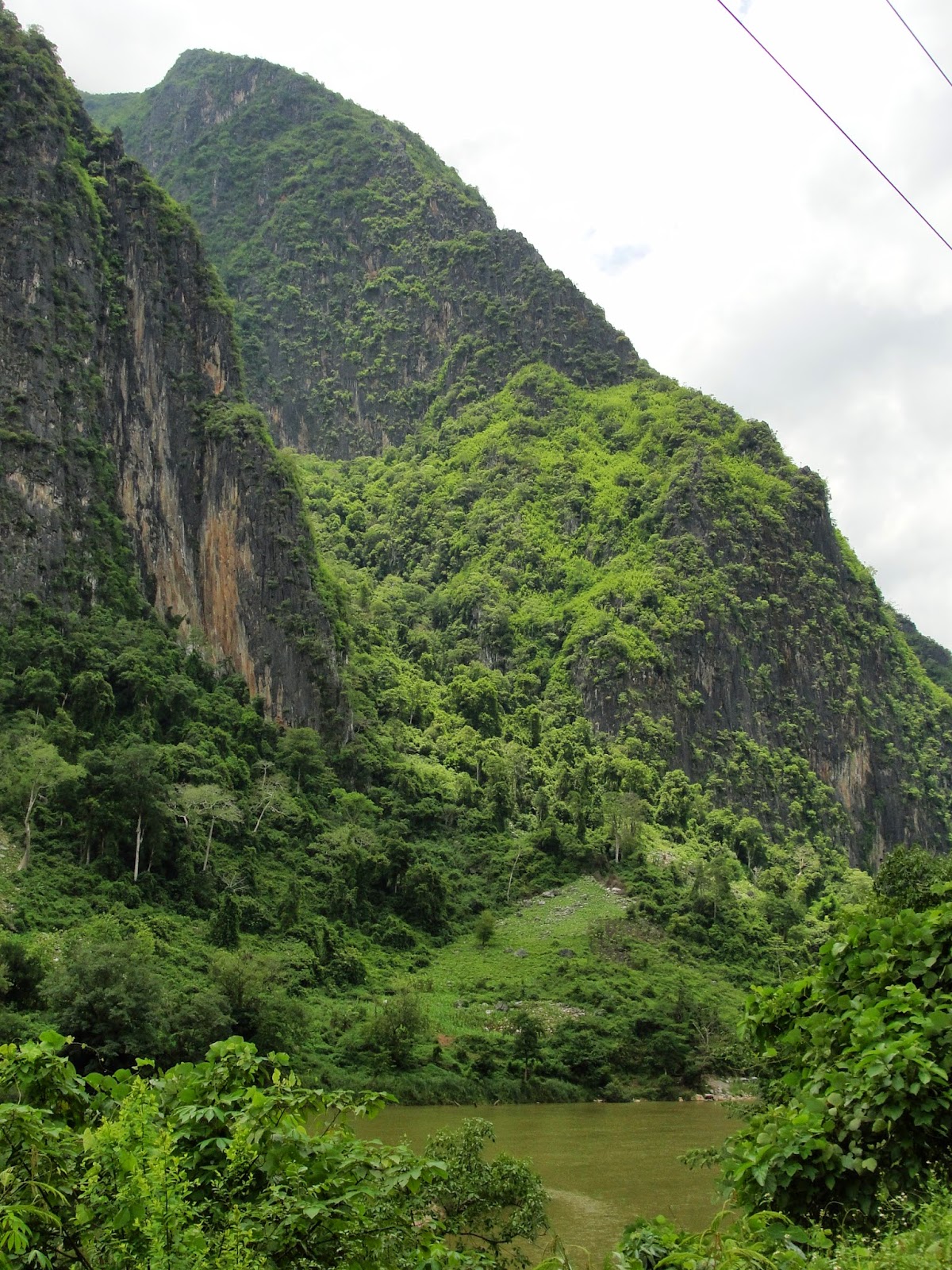 not a bad place to be "stuck"

In between laying around and complaining about our guts, the heat, and our inability to make plans until further notice (ahem firstworldproblems ahem), we learned about some things to do in Nong Khiaw. And then we did some of them.

1. One was Phatok Caves, a hiding place for villagers during the Second Indochina War and later a military training base. 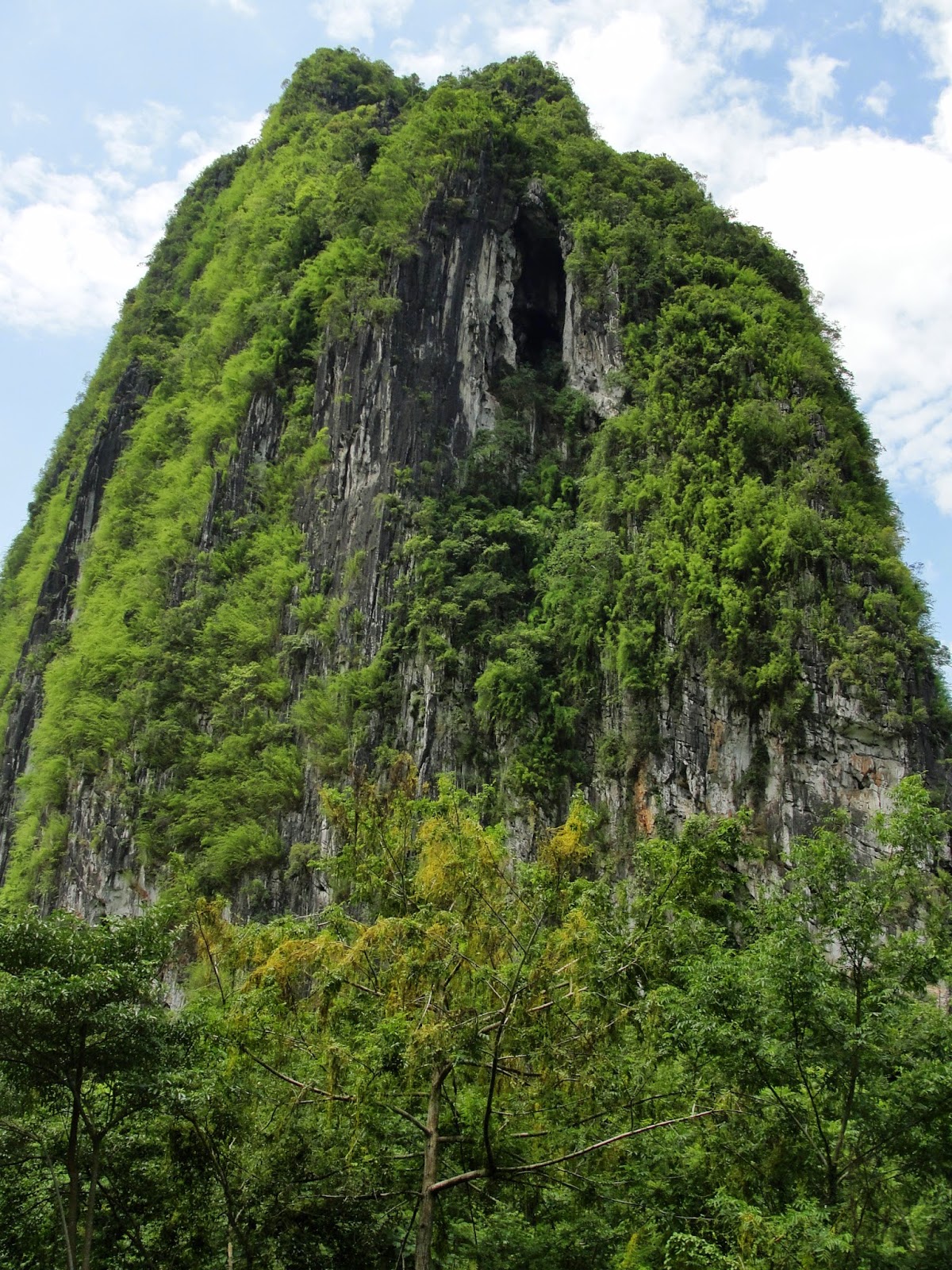 them's caves in them thar karsts

The caves are easy enough to walk to but OMG the hot, so we rented bikes one day to visit. (Tickets are normally 5,000 kip but we never saw anyone collecting money.)

The main cave was massive! Easy to see why folks hid here from the bombing. 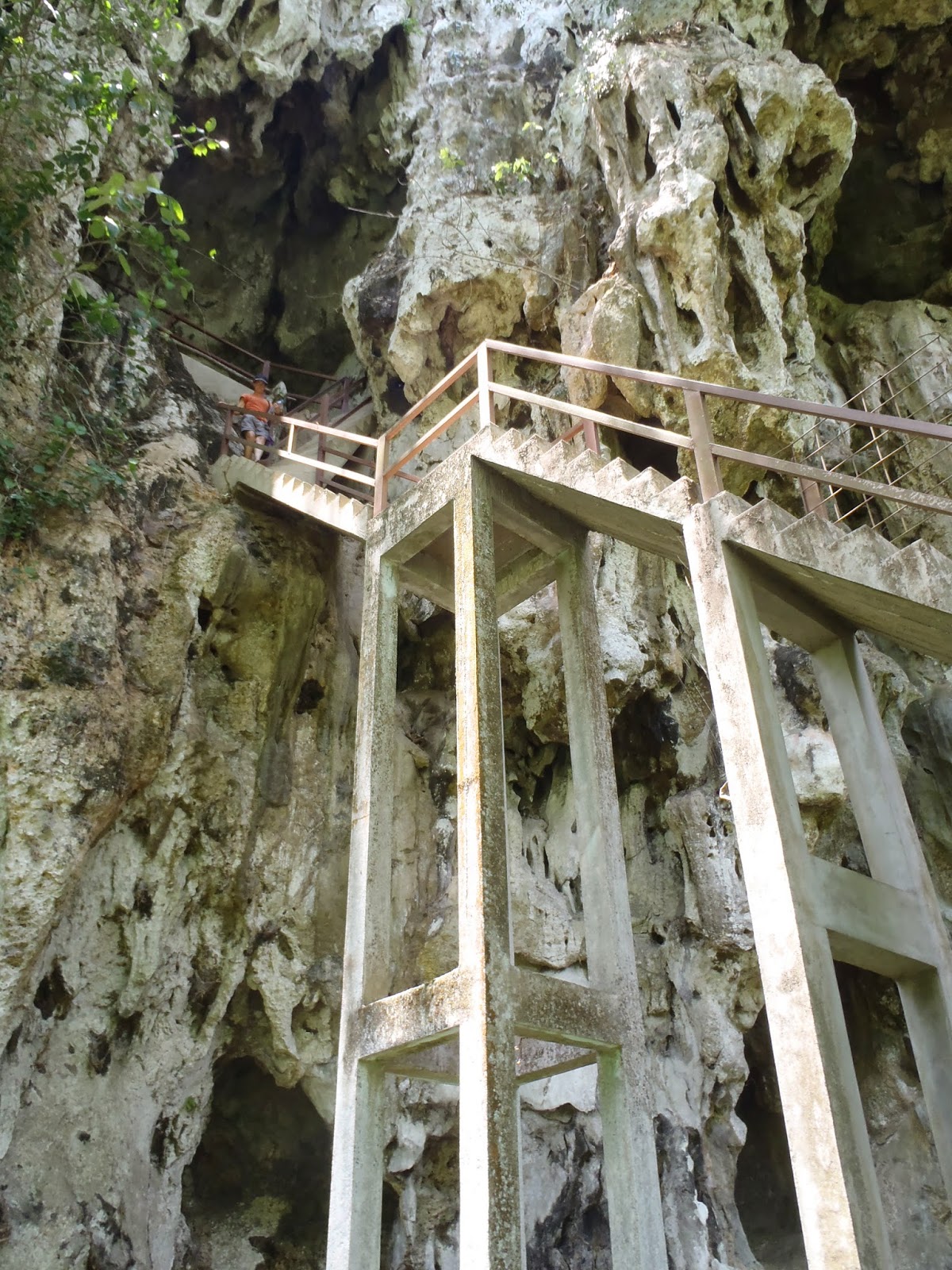 first you have to get there 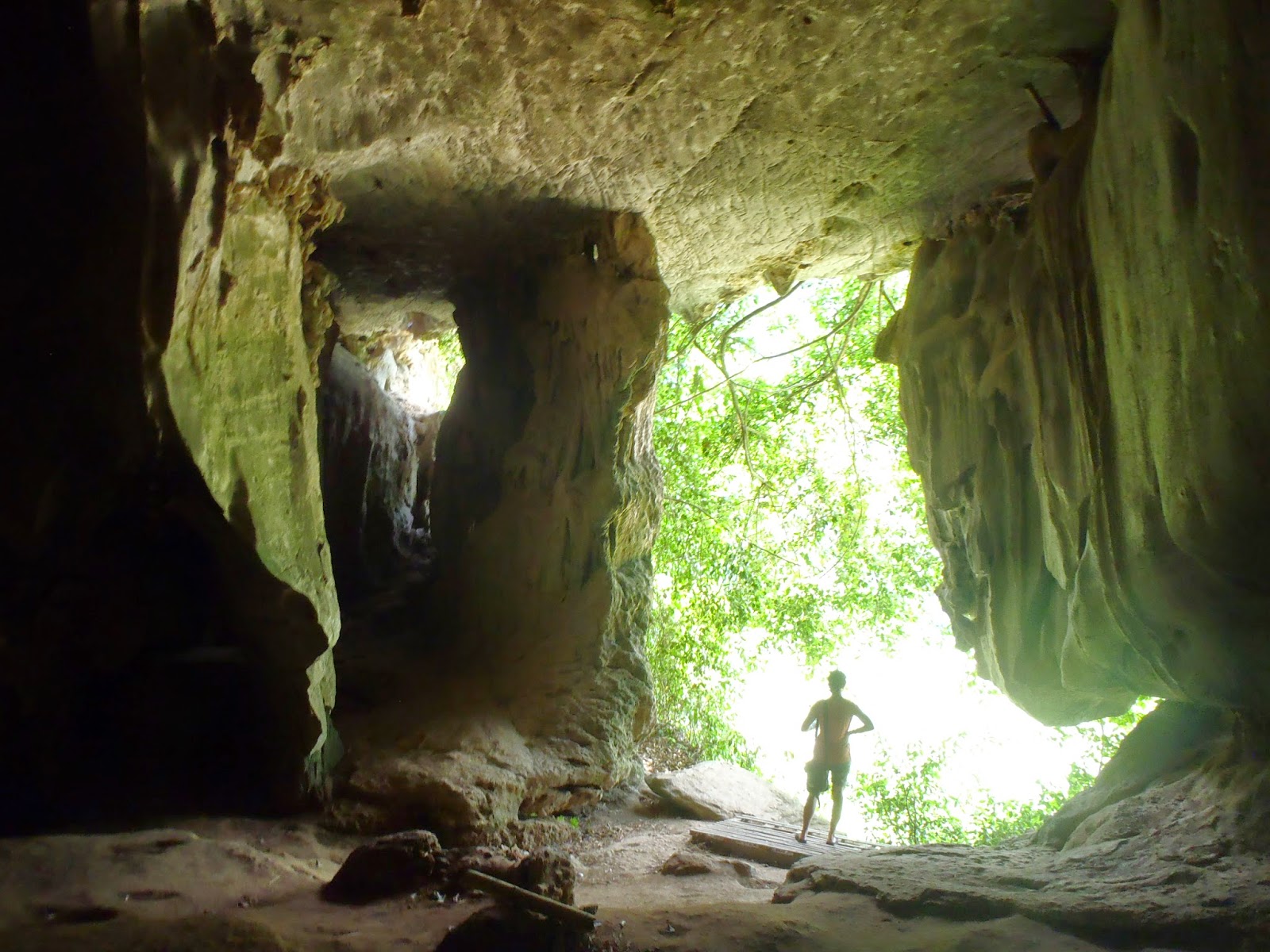 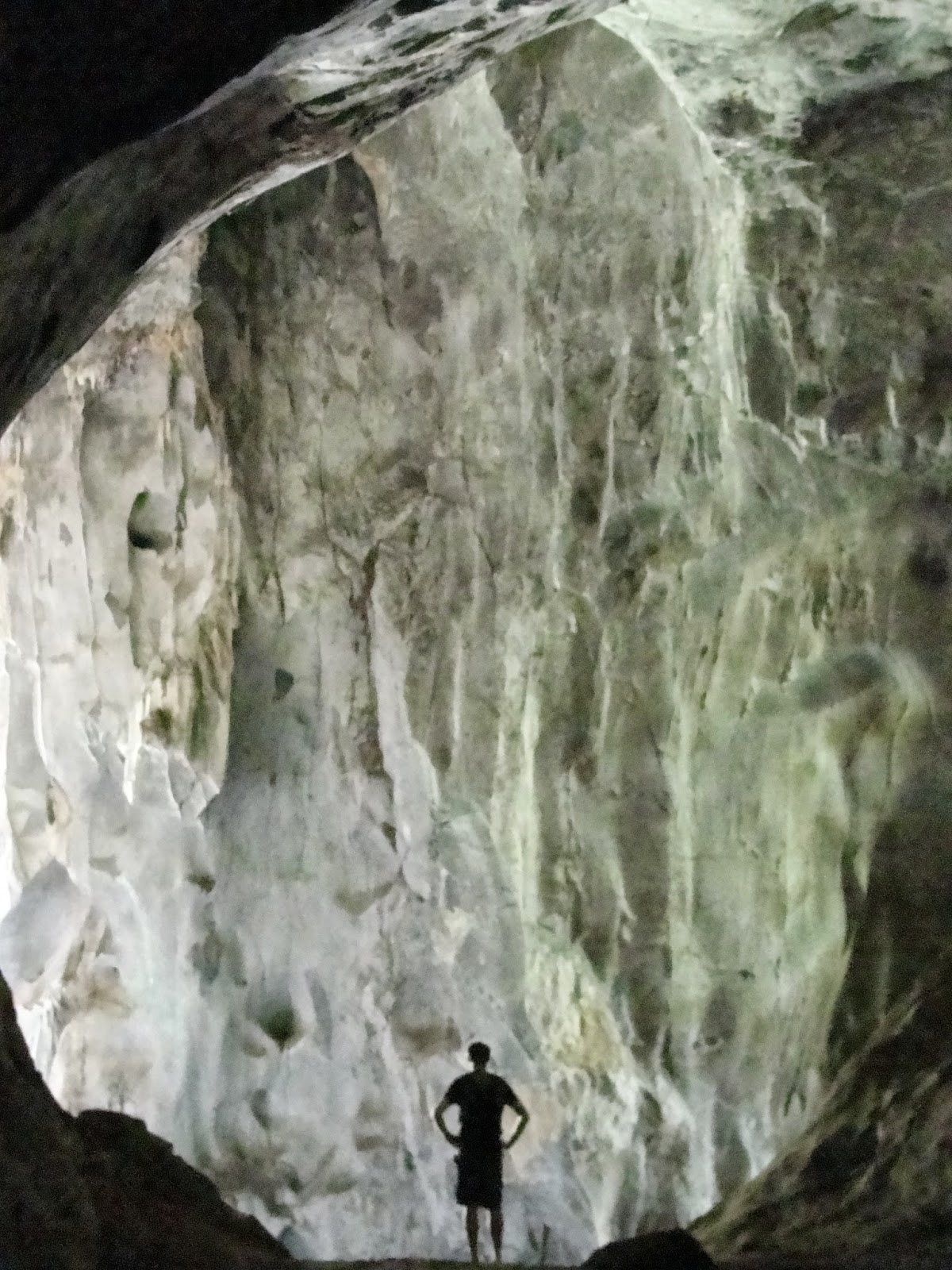 Helpful signs inside point out the different areas of the former training base. 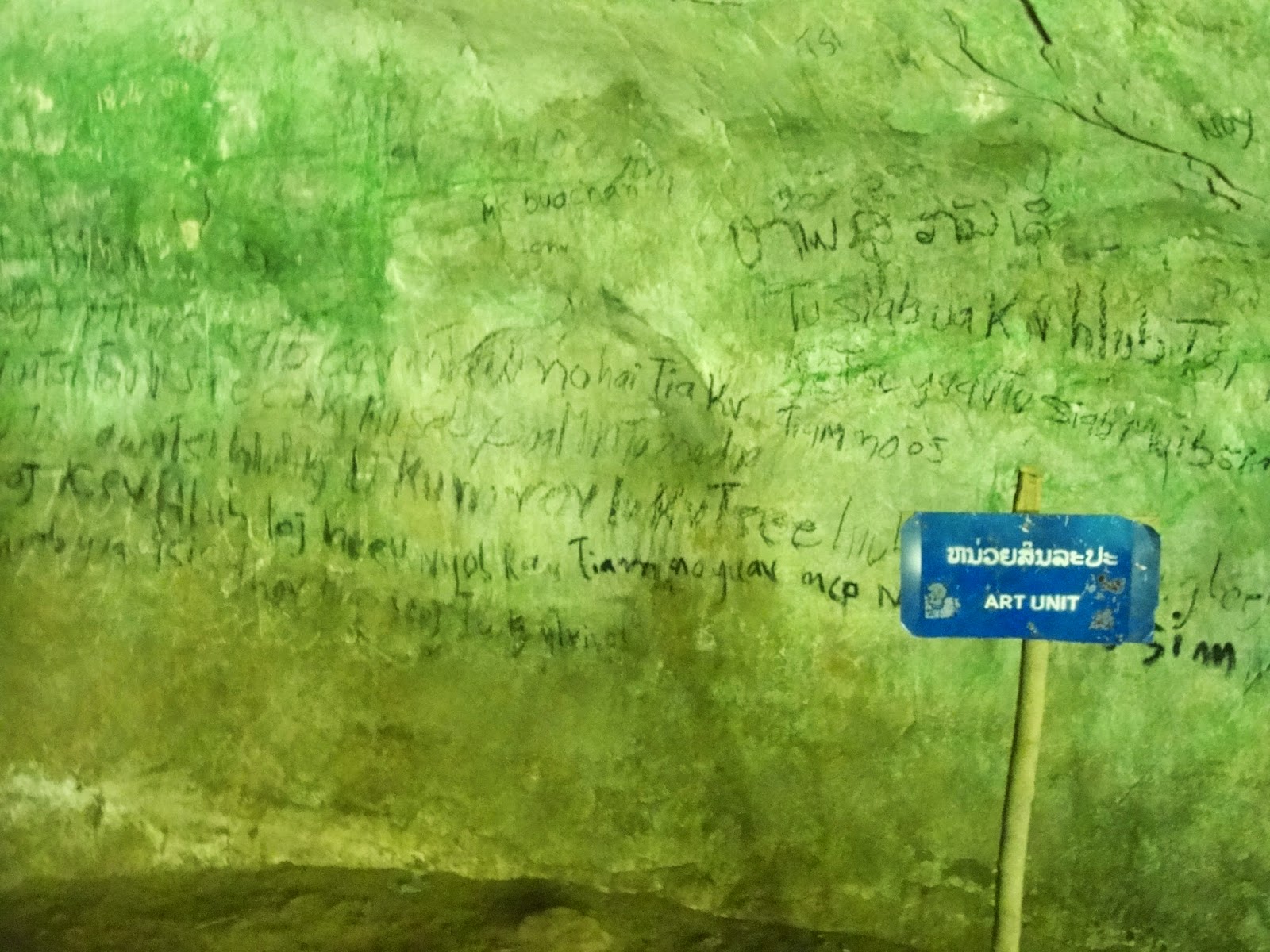 the "art unit" was our favorite

Outside, if you take the trail to the left you'll disturb a bazillion butterflies and eventually come across another cave entrance (the "trade office"). Inside there is a looooooong passageway. Bring a torch and see how far in you can go without getting claustrophobic! We turned around after about 7 minutes but it appeared to go on and on, possibly linking up with the other cave eventually. 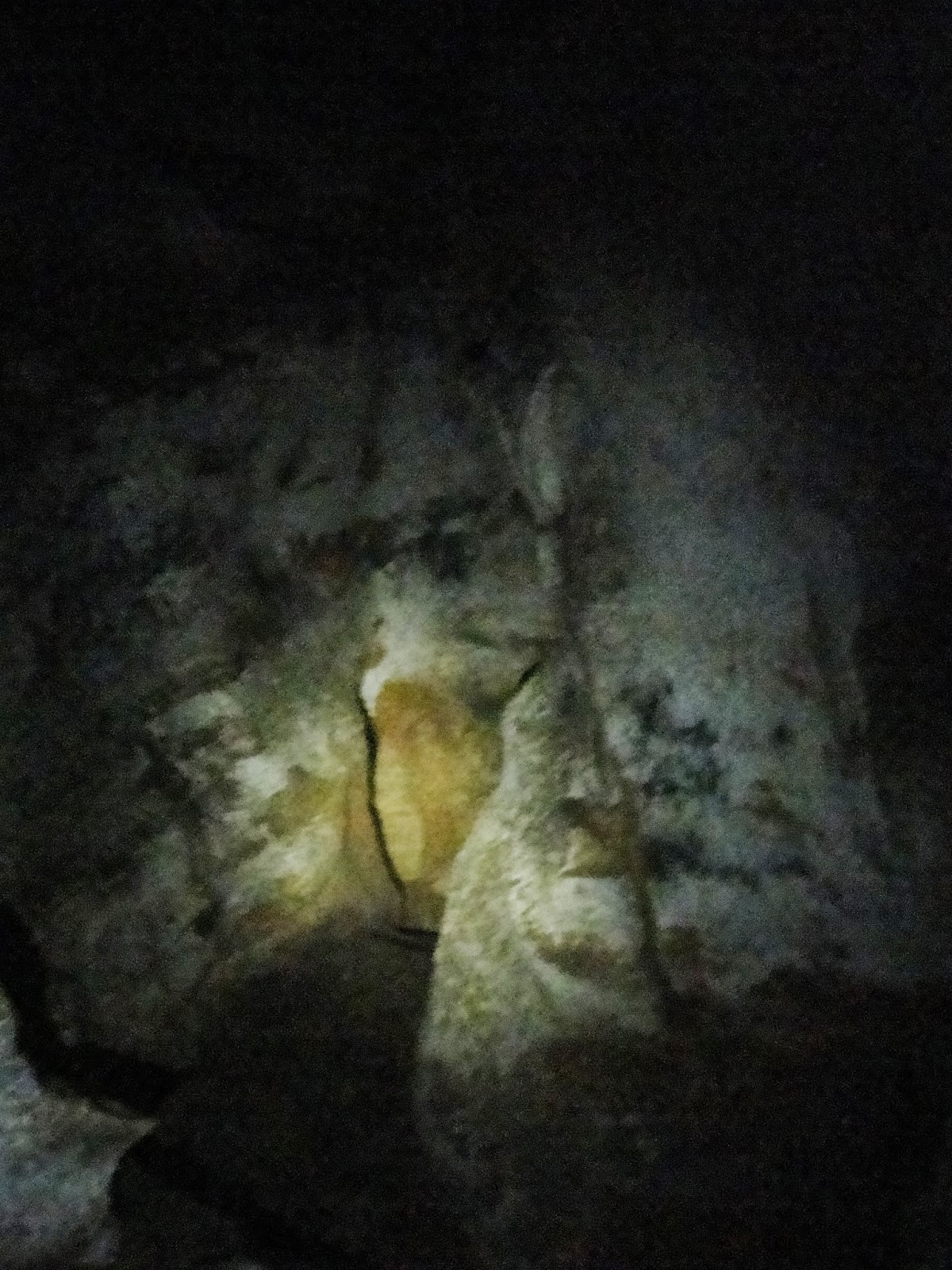 2. The 100 waterfalls hike is supposed to be amazing. You can also do a hike/kayak combo or a hike/homestay/kayak combo. We read a bunch of reviews and decided to skip this for a few reasons - it was pricey, it's leech season, we didn't feel the need to trek through more rice paddies, and it's really just one long waterfall (not 100). And did we mention leech season? Anyway, see previous post about skipping future "most amazing waterfall" hikes - we'll just make up for it in Oregon someday.

(Jen did take in a free screening of a CIA secret war documentary at Tiger Trek's office one night while Patrick was still recovering. There's just sooooo much we don't know about what really happened here a few decades ago. The people participating didn't even know. No one really knows. It's shameful, really.)

3. Instead of the 100 waterfalls hike, we did the "Viewpoint" hike. 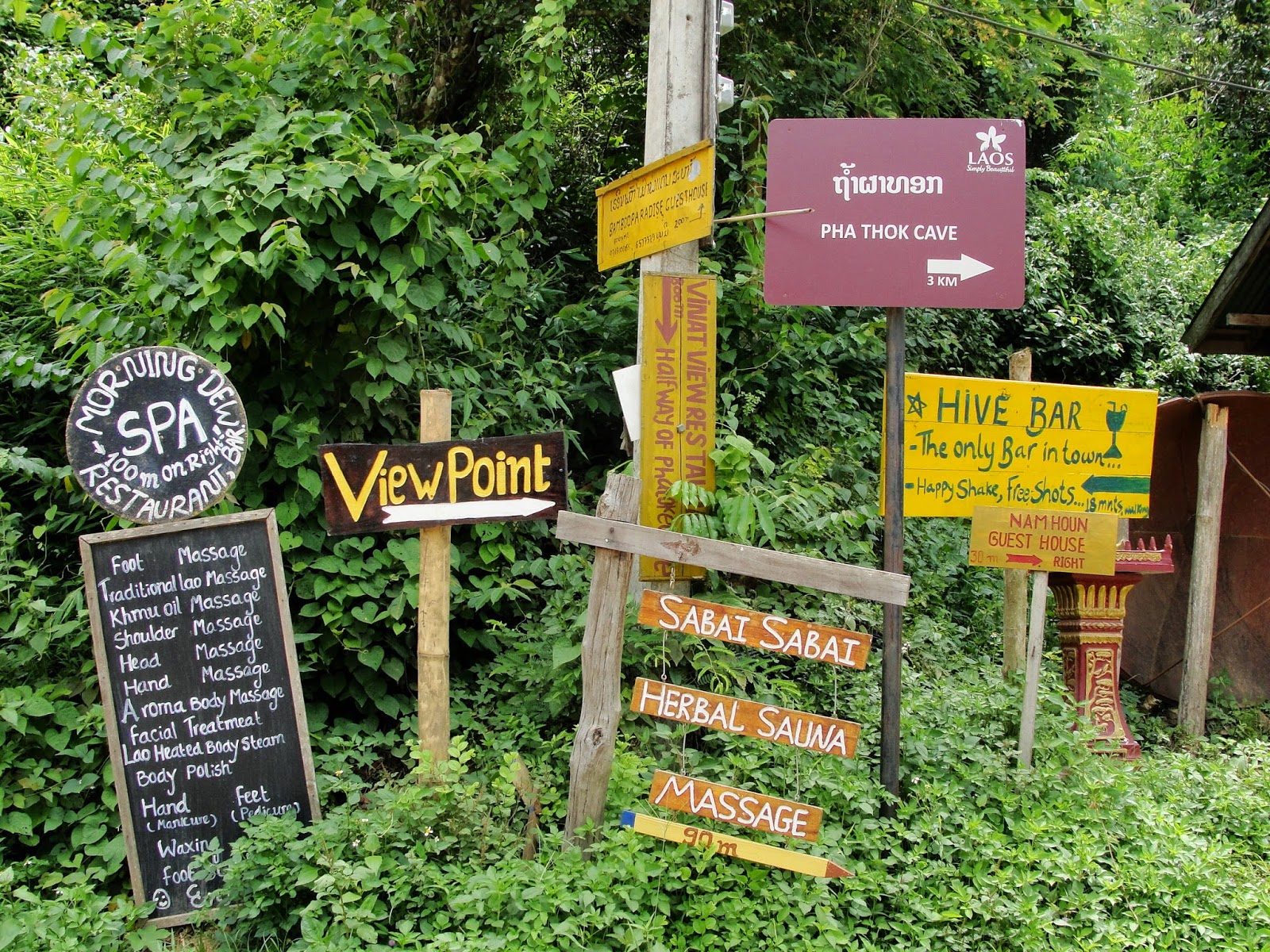 This trail was established a few months ago by a local and weaves about 1.5 hours uphill through mostly-shaded farmland to a panoramic view of Nong Khiaw. hey, remember this time last year
when we were cold? 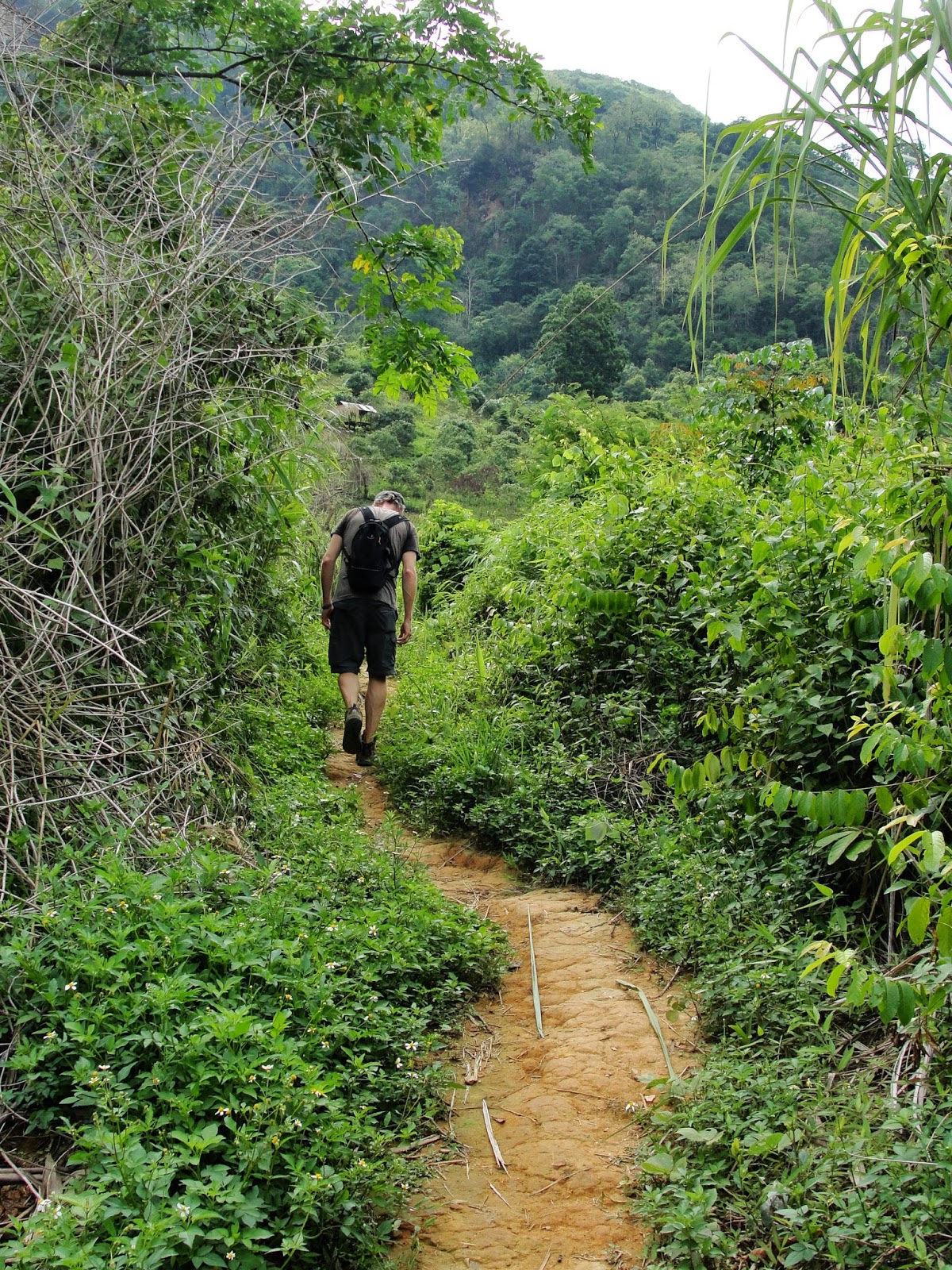 another Saturday morning
in my quiet mountain town

The 20,000 ticket price at the trailhead in town pays for trail maintenance (which they do a great job at), ticket collector salaries, and some sort of community tithe. We were happy to pay it.

4. We kinda laughed when we read this in the guidebook but yes, the views up and down the river from the big ugly concrete bridge really are that spectacular. 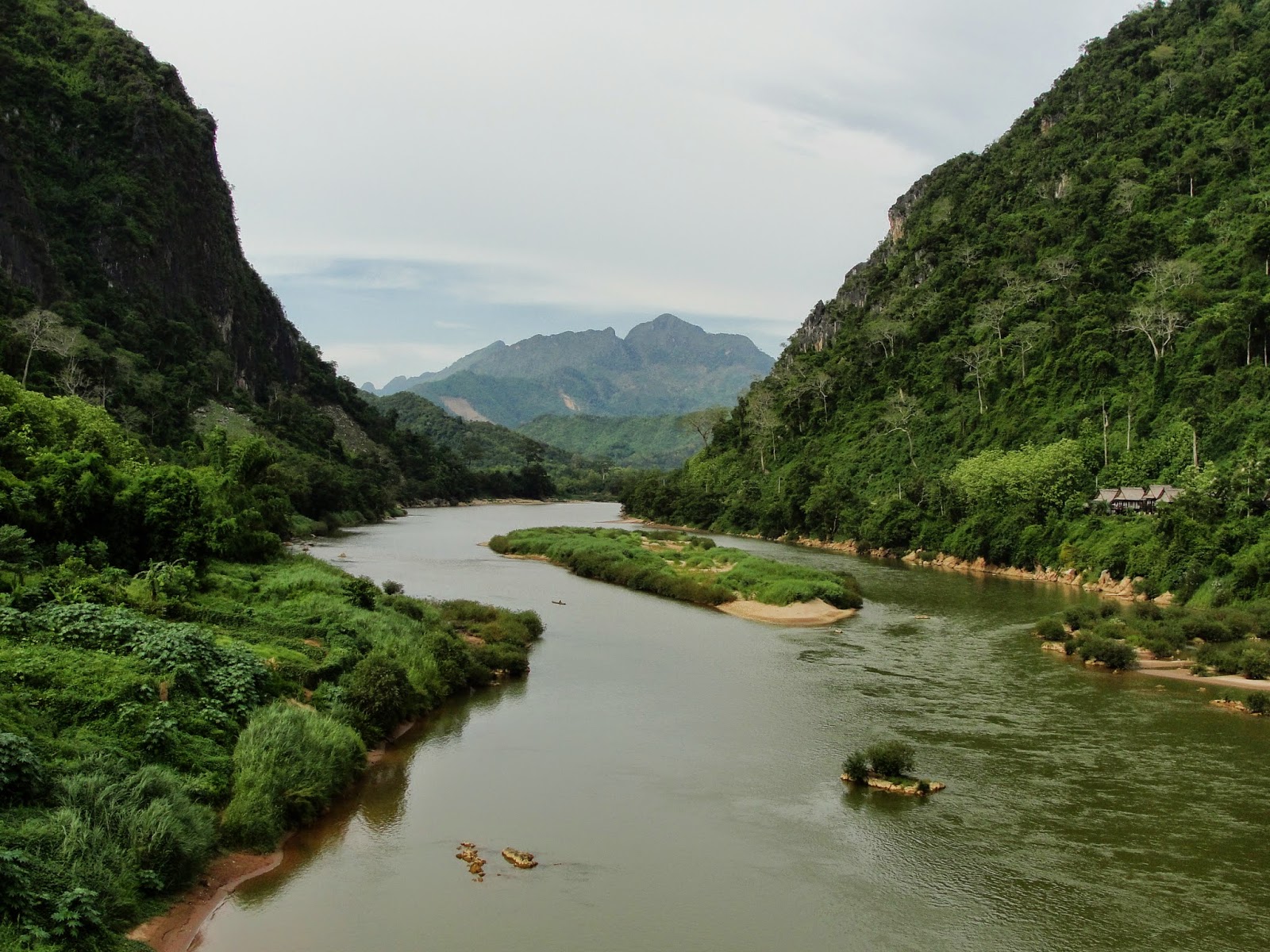 very nice during the day but... 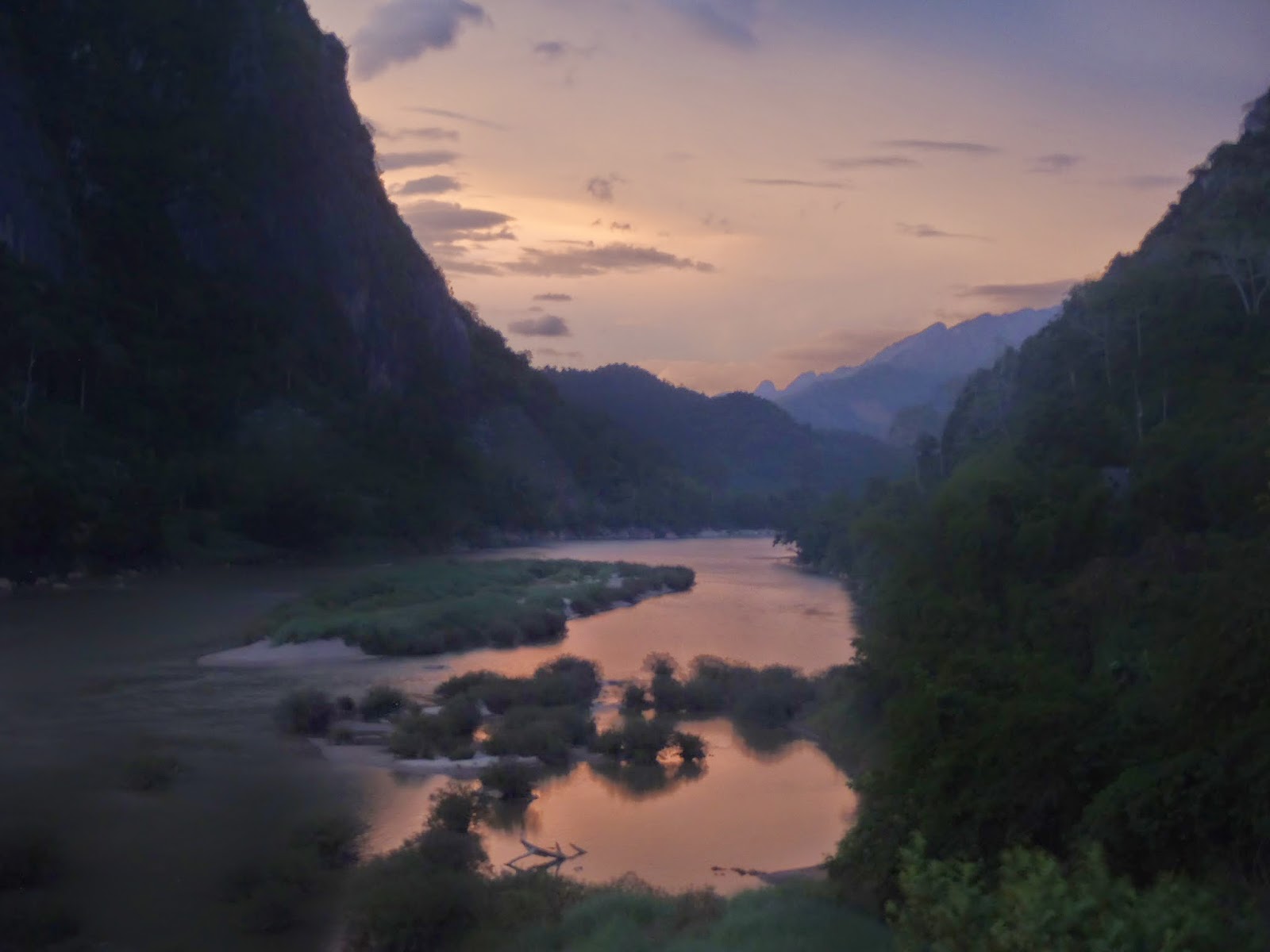 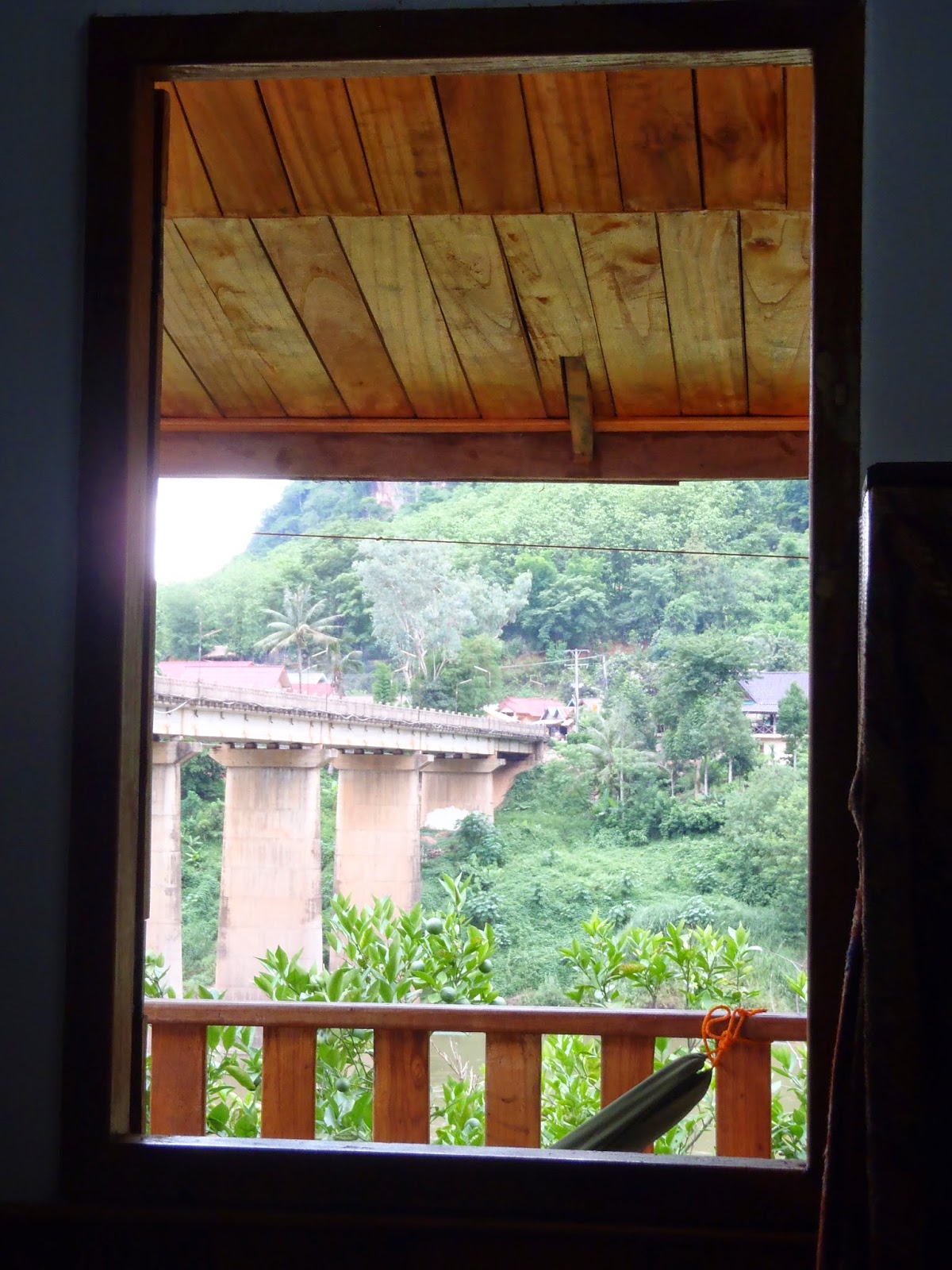 the bridge itself? not so pretty

5. Muang Ngoi is a popular day trip or overnight destination from Nong Khiaw. About an hour upriver this small village offers trekking, fishing, kayaking, or just more sitting around if that's your thing. We heard good things about it, but we also heard it's heavy on the tourist side. In our mildly unhealthy states Nong Khiaw was about as remote as we wanted to get... and since we were likely heading into Thailand to say "no thank you" to who knows how many tuk-tuk drivers and handicraft merchants, we really weren't interested in saying "no thank you" a bazillion more times in this little village. If you go, tell us what we missed!

Despite the food poisoning recovery and OMG the HOT, we really, really loved our time in Nong Khiaw - it had that intense, remote jungle, middle-of-nowhere feel that kept reminding you that you were someplace special. We loved almost every minute in Lao actually. I got a little sad at the Viewpoint peak thinking about how our time was coming to an end so quickly...

Food notes: over six days we literally rotated between Deen's Indian restaurant and Mekara's Lao restaurant. Both were excellent - delicious food, really nice spices, good portions, great prices, and lots on the menu to choose from so we never got bored. Both places make-to-order which means it could take 30 minutes to get your food... But everything was so worth the wait! 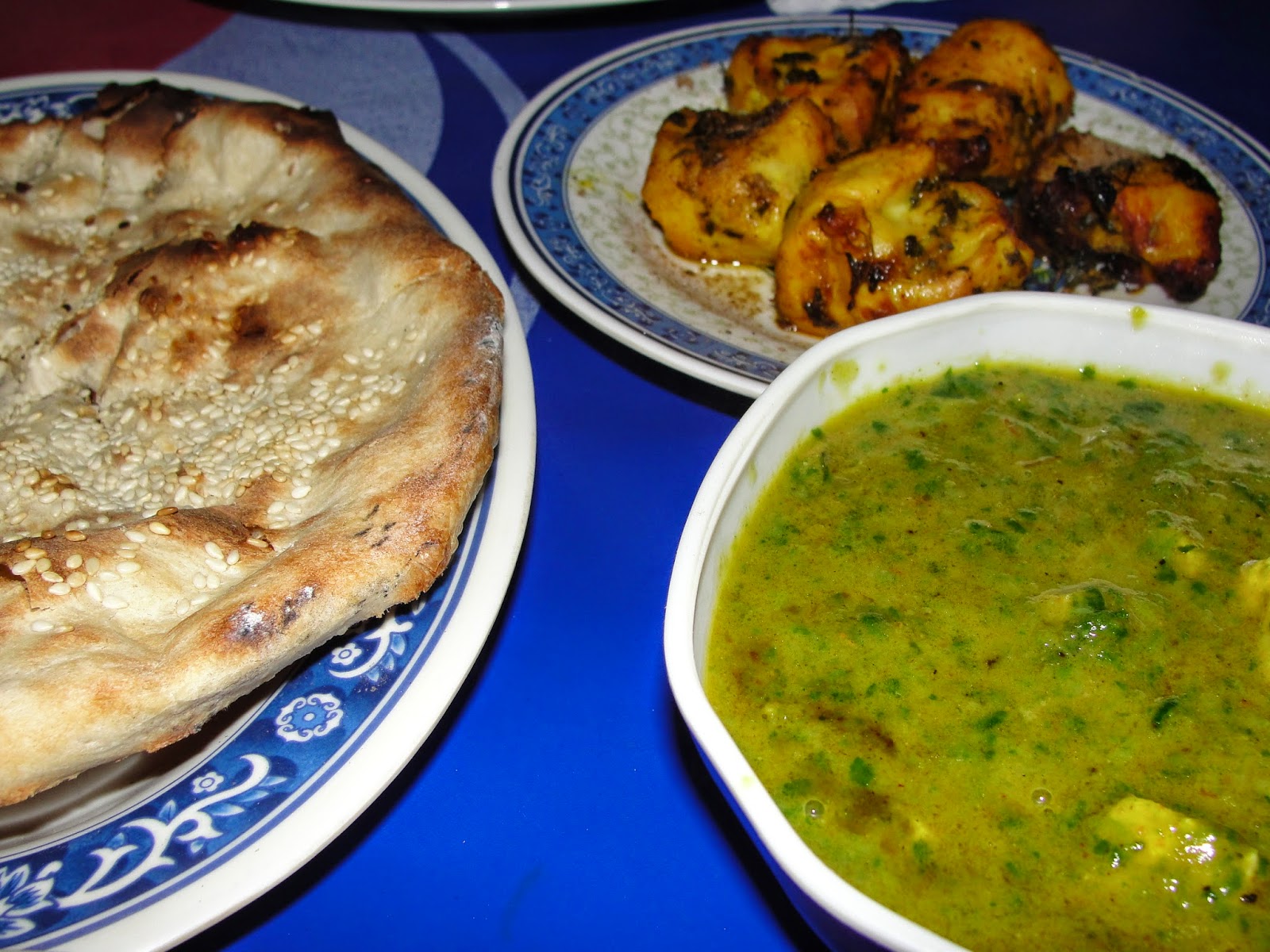 one of many dinners at Deen's 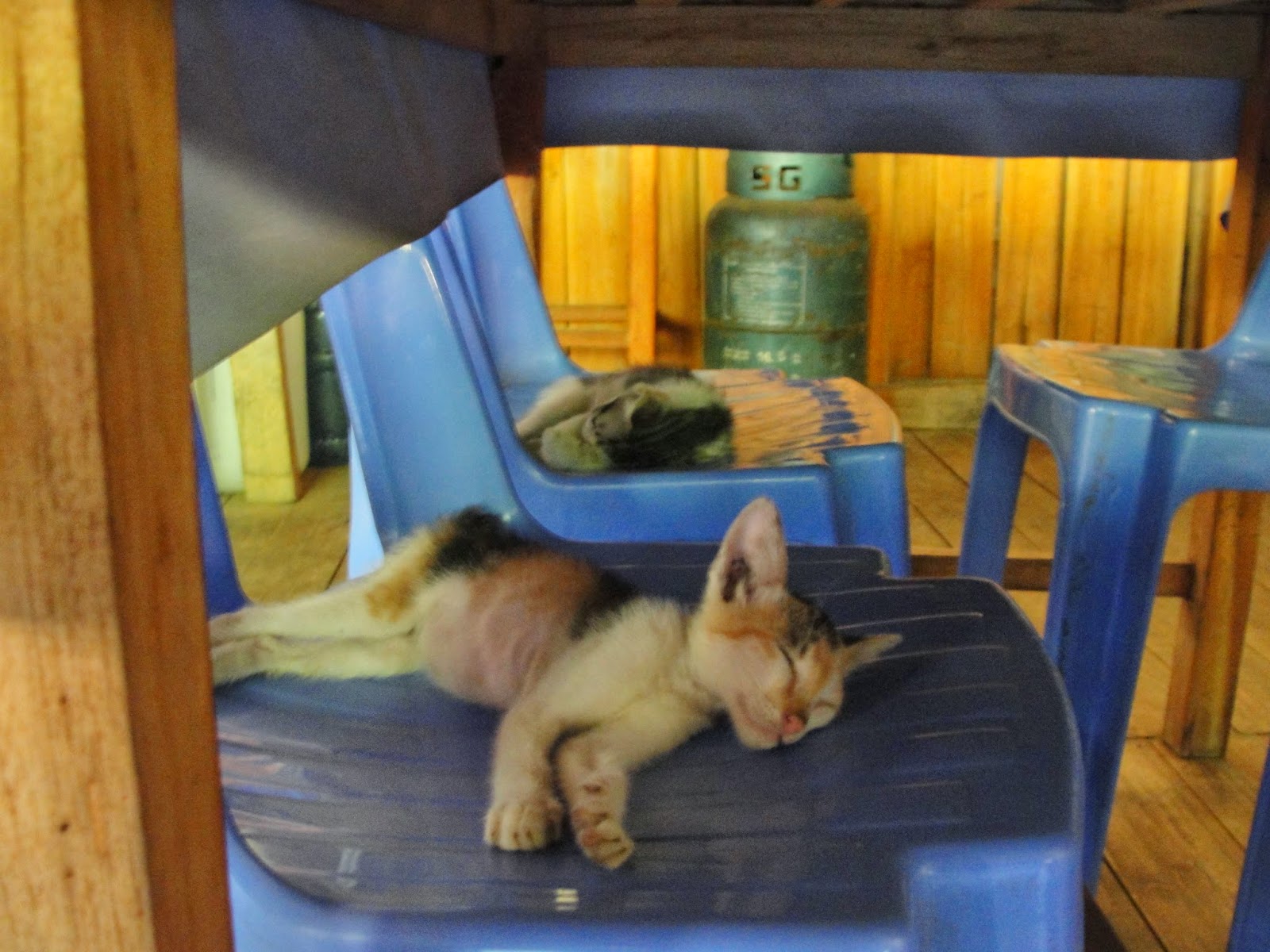 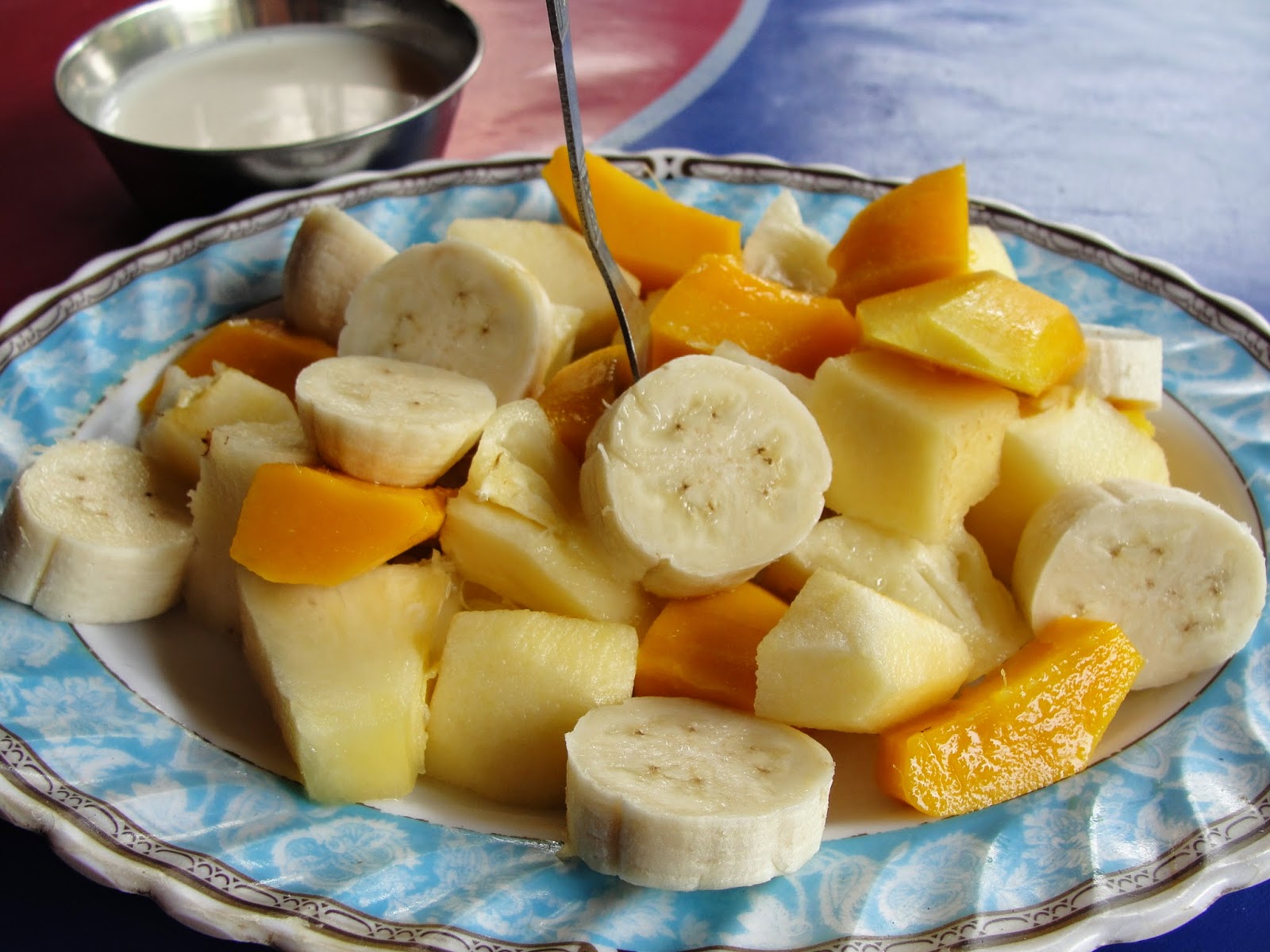 (and they made a mean fruit plate) 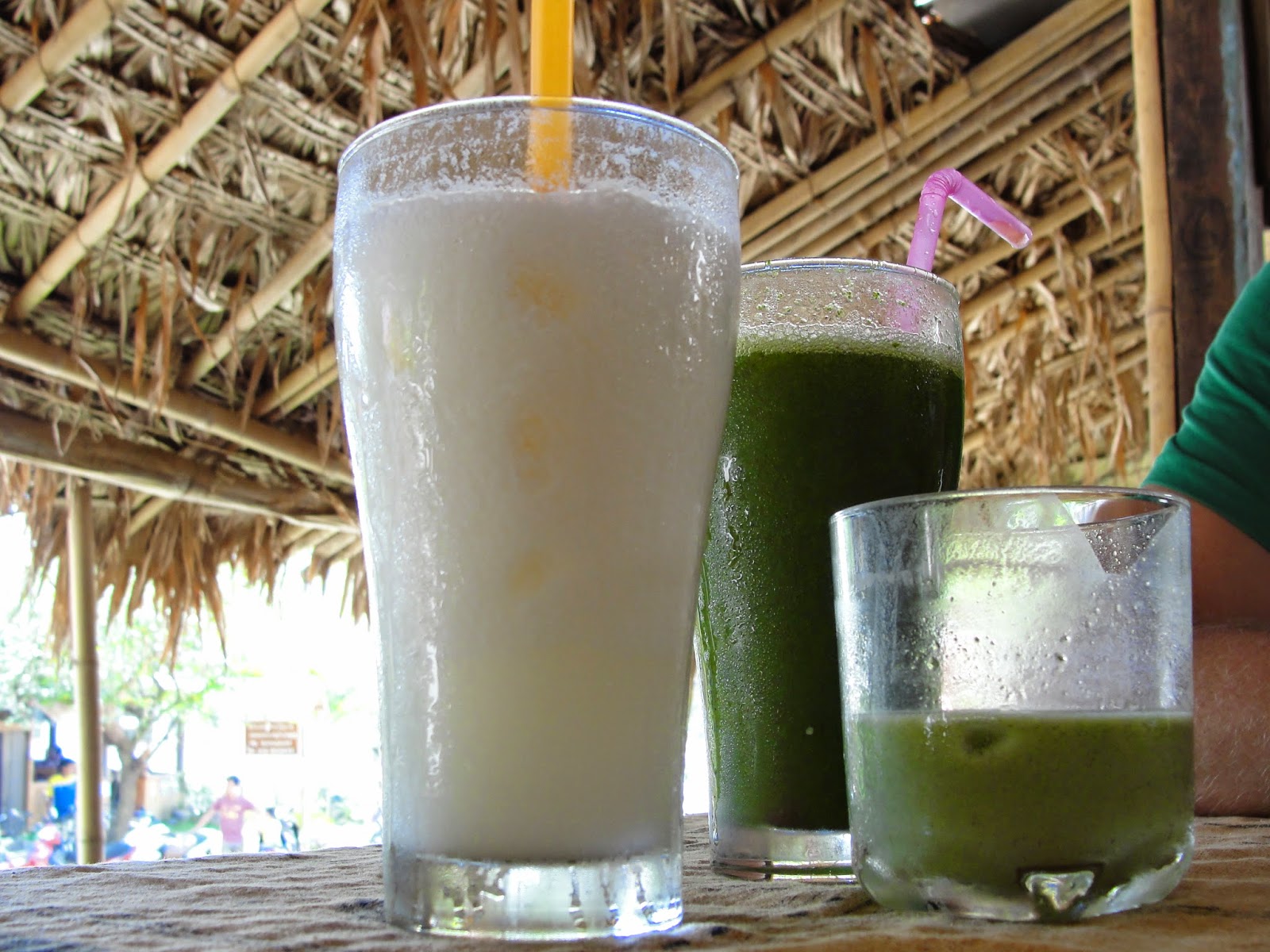 the nana (mint) shake at Mekara
always came with a little extra
("big!" she would say as she set down the glass) 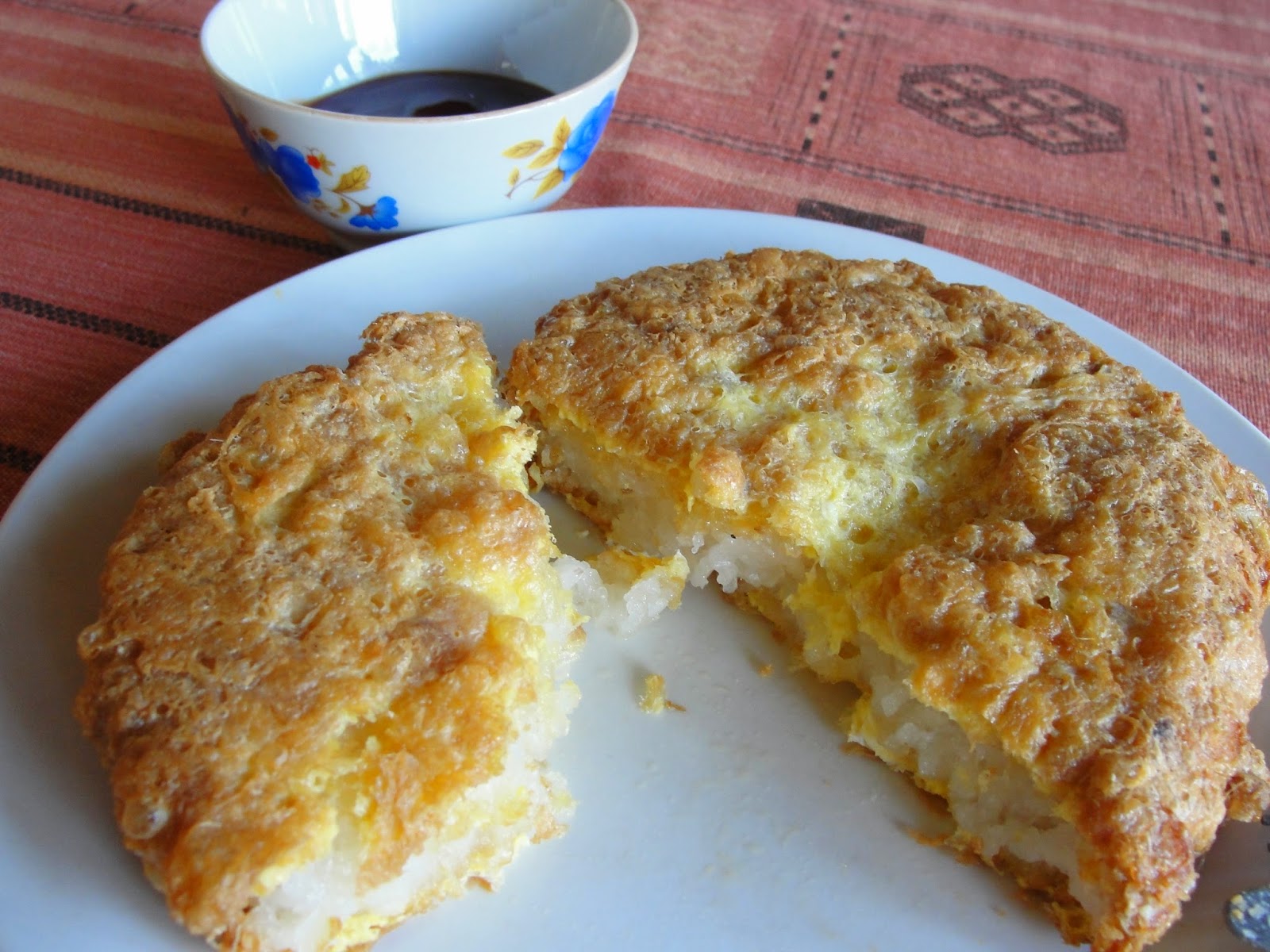 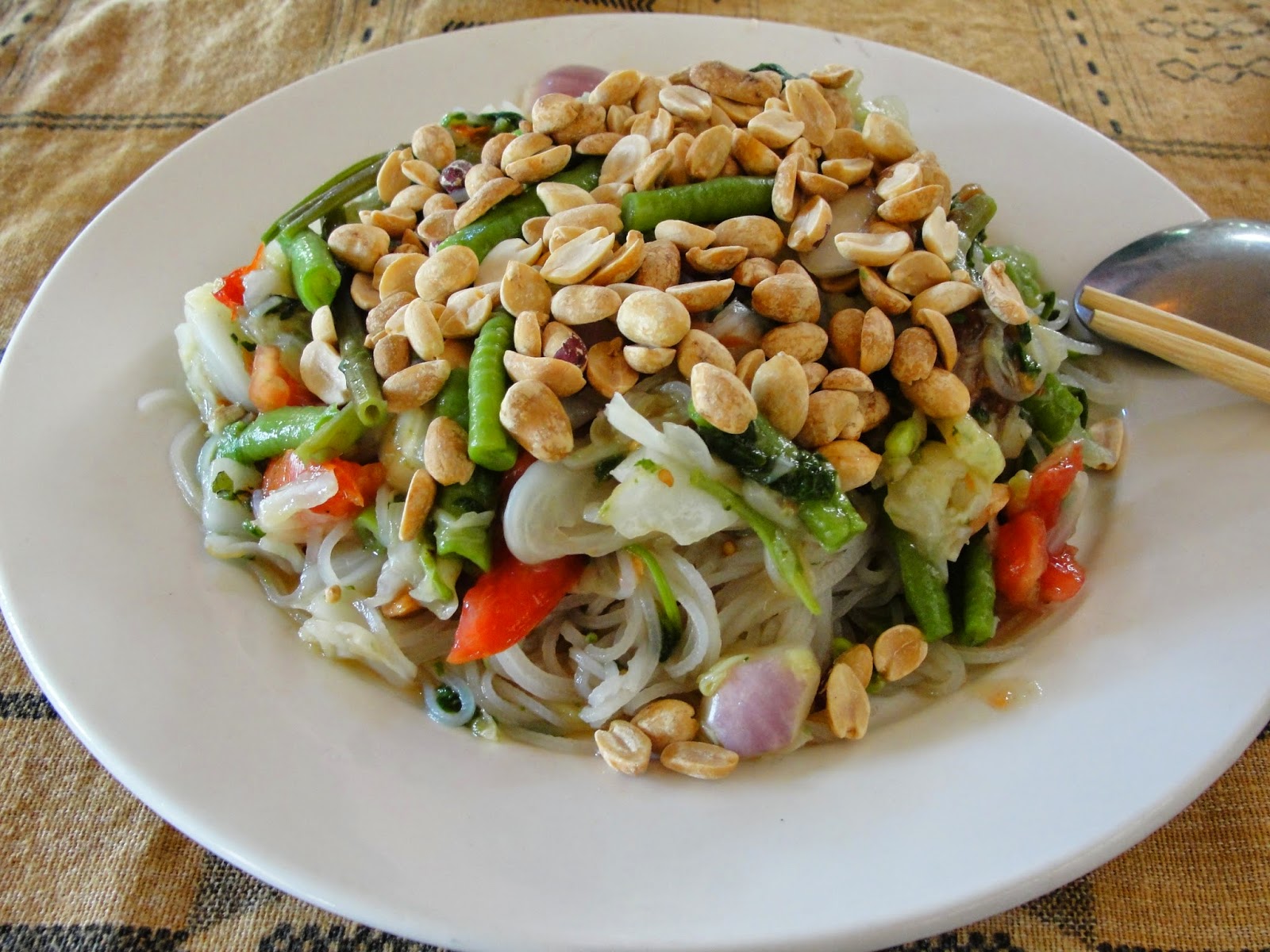 simple and super spicy at Mekara

We also tried CT Restaurant here and there just for a change of pace. The soup was alright but we ended up missing the flavors at Deen's and Mekara. 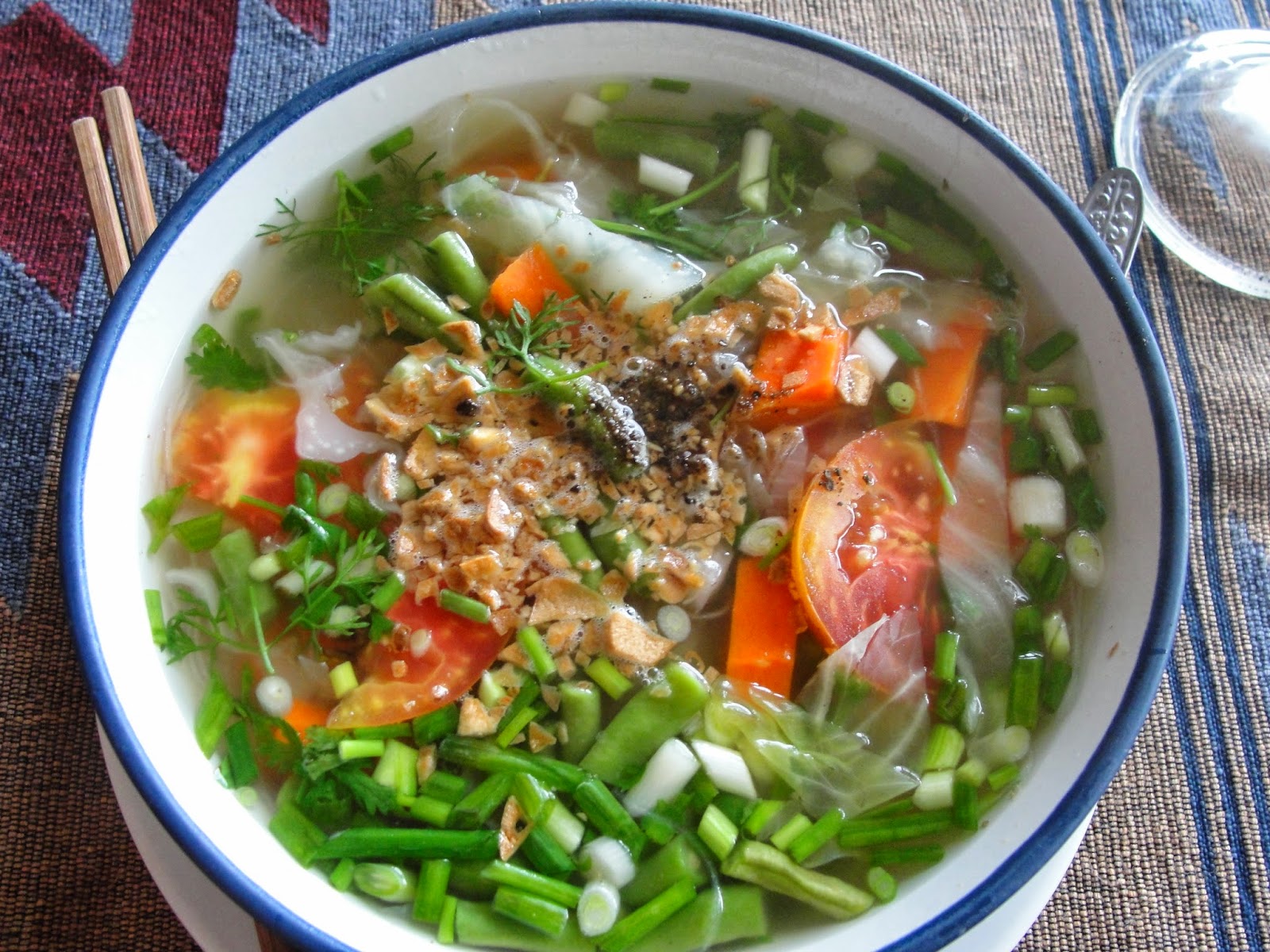 Lodging notes: the Nam Ou River Lodge (one of only a few options available for booking online) was too expensive and too far from everything. Due to low lodging standards, illness, and lack of interest in spending any energy shopping around, we wandered into and parked at Sunrise Bungalows for the rest of the week. Things in the bathroom kept breaking, geckos scurried in the rafters all night long, and it wasn't the cleanest place... 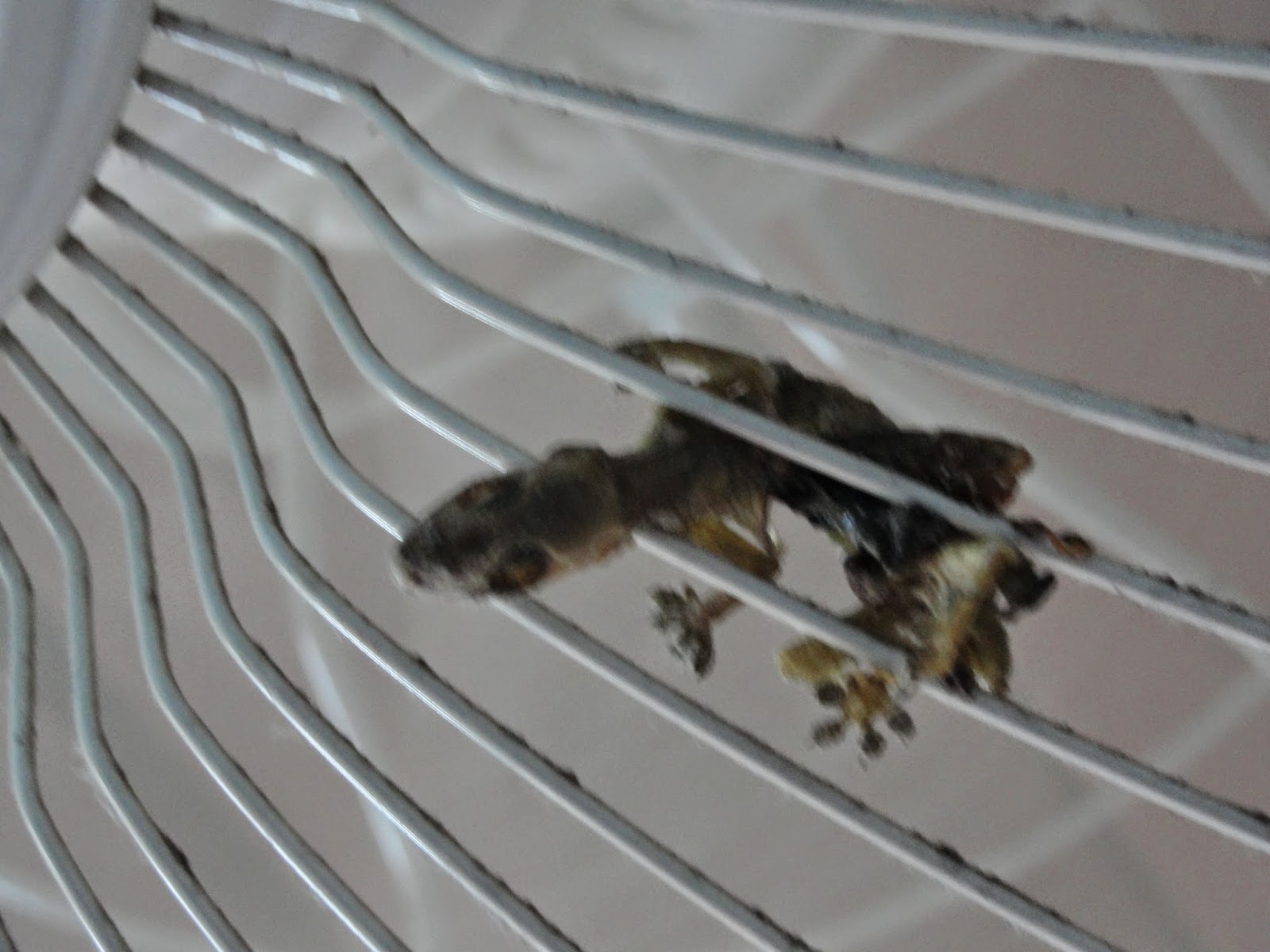 a warning to others?

Can't believe I just admitted that we stayed somewhere with a mummified gecko in the ceiling fan. For almost a week, we stayed there. But the tea kettle saved us $10 in coffee expenses and the balcony view was lovely. 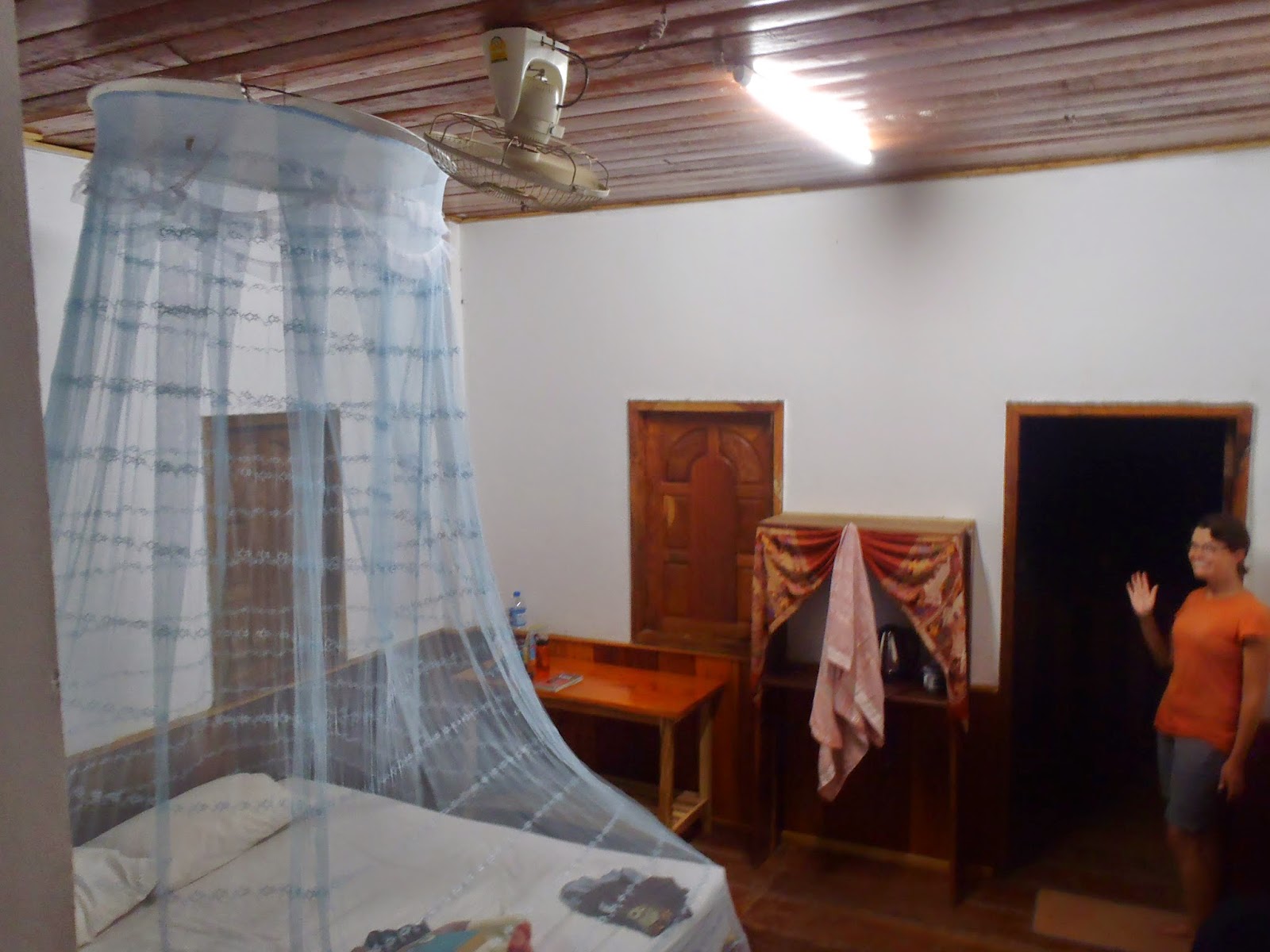 it was definitely roomy 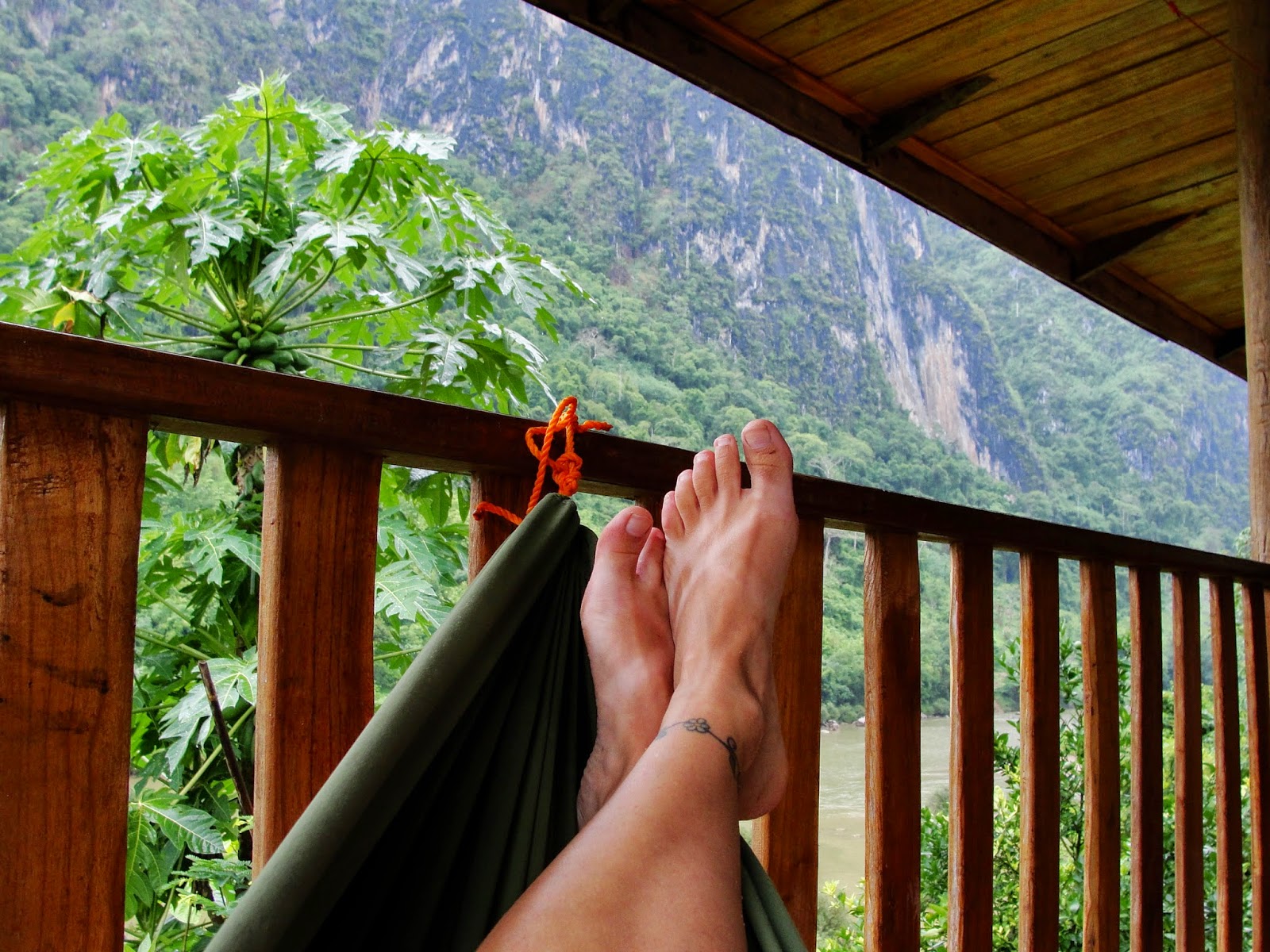 who needs a functional bathroom faucet when you have this view?

And now! After much discussion! We have a plan! Our three weeks of loafing around Lao will end in a frantic push to the Thai border in a few days. Flexibility is so important in long-term travel, especially when pesky things like coups arise, so we'll head to Chiang Rai and Chiang Mai to scope out the situation, and take it from there. Maybe we'll pack it in and head to Nepal. Maybe we'll find a nice Thai beach or a great volunteer opportunity in middle-of-nowhere Thailand. At this point your guess is as good as ours!
Posted by Jen
Email ThisBlogThis!Share to TwitterShare to FacebookShare to Pinterest
Labels: Friday five, lao