A little bit of Lao culture... by way of HATS!

We don't do a great job telling you about the people we meet, and we also don't say enough about the local cultures. It's time we did something about that!

Depending on who you ask, Lao has anywhere from 3 to over 150 different ethnic tribes. There are opportunities to visit ethnic villages in Lao; however, visiting a tribal village is often intrusive and detrimental to the local villagers, it's sometimes not even authentic, and it's usually not very meaningful to the tourists. Ethnographic museums, on the other hand, provide up-close-and-personal views into village life with no disruption.

The Traditional Arts & Ethnicity Center in Luang Prabang is an ethnographic museum worth a visit. It offers insight into many of the Lao tribes through displays of traditional clothing and everyday household items; visitors can also watch a handful of really interesting videos of daily life in the villages.

I really liked the hats so I thought I would share a few with you... Since most of you probably won't be visiting Lao anytime soon, I'm transcribing right from the signs at TAEC. Hopefully they don't mind.

First up, an Akha hat. Akha are indigenous hill tribes living in small villages high in the mountains. Akha headdresses are designed by their wearer and each is unique. 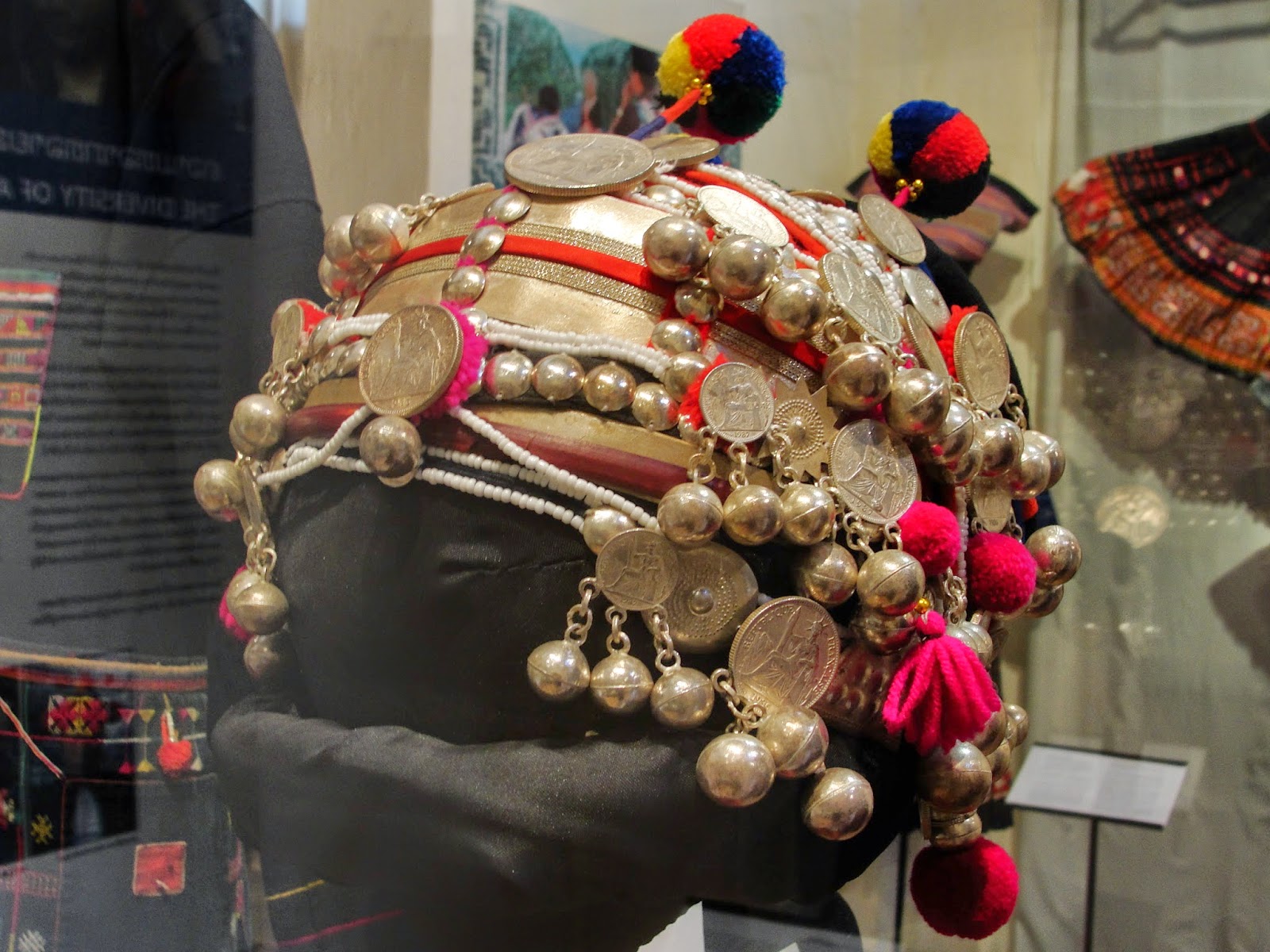 "This headdress is made of 10 separate articles and over 300 silver ornaments assembled to create a striking headpiece which is the pride of an Akha woman. A woman gradually collects and earns silver for her headdress from about 12 years of age, using the local silversmith to pound coins into balls and flowers. Traditionally, women would wear their headdress even while bathing, sleeping, and working in the fields."

This headdress was AMAZING. In another display the museum mentioned that it wasn't uncommon for land owners to pay tribal woman in "useless" outdated coins rather than usable currency. The women would use their payment to create their headdress - making these "useless" coins highly valuable to them.

(And as an aside, silversmiths are highly regarded in tribal communities. We saw a silversmith hand-pounding a coin into a ring where we trekked in Sapa. He was patient and very detail-oriented. It took him about 30 minutes to complete one simply designed ring which would probably sell for $2-3 - more than most village folks make for a day's work.)

The next three hats are from the Hmong tribe, the same tribe we trekked with in Sapa. Hmong (sometimes seen as Mong or (H)mong) also live in the highlands and have numerous subcultures. We heard and learned the most about the Hmong due to the fact that they were heavily recruited during the French and American wars to fight against communism in Vietnam and Lao. Many fought, many died, many fled.

But back to the hats! The colorful, creative hats! A lot of the traditional materials have been abandoned for things you can find in city shops or even village markets. Hence the pom-poms... 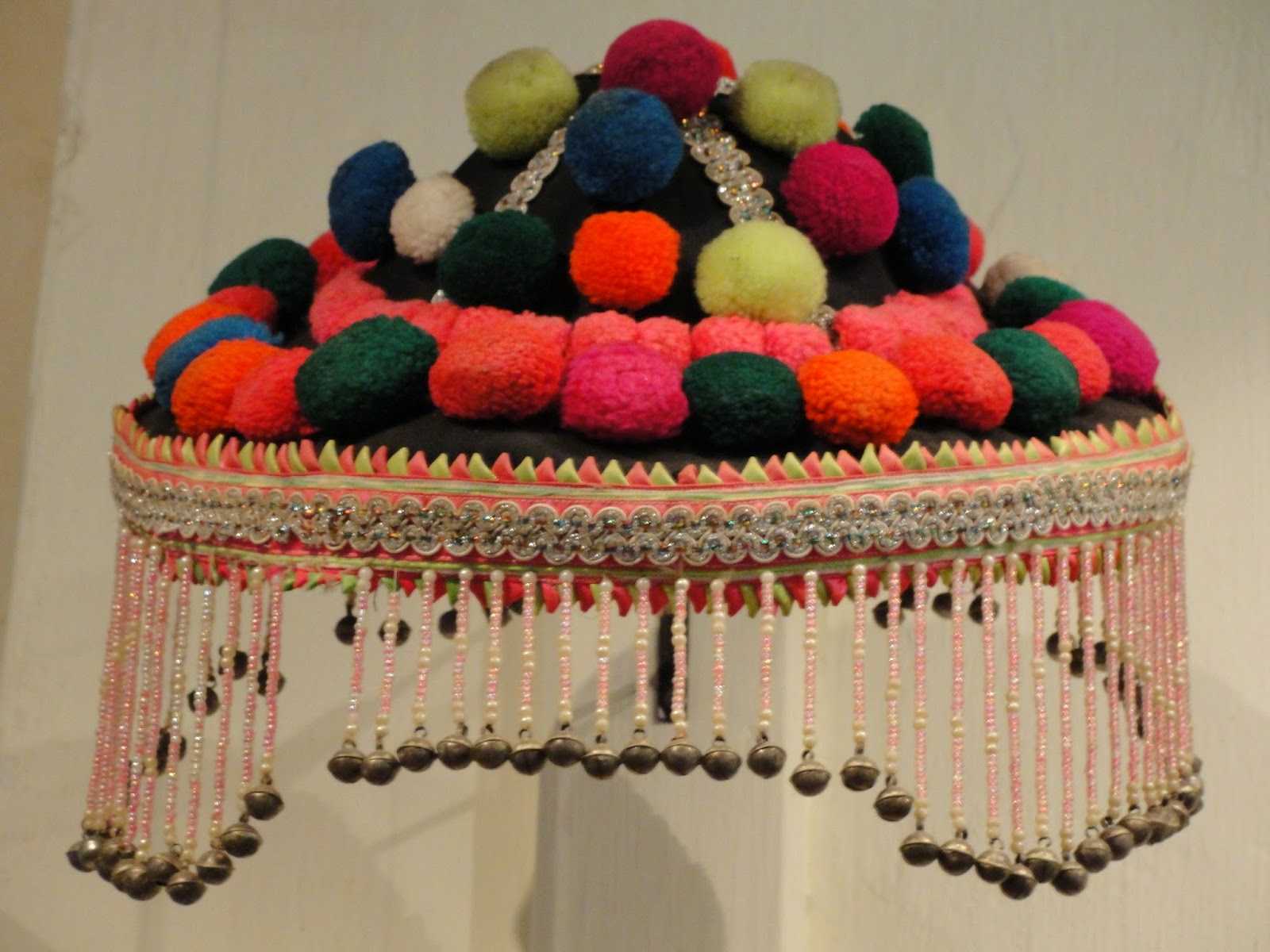 "This hat was made by Xiong Lee by adapting Chinese hat designs she saw on TV for her daughter, who was 14 at the time. The bells are silver made from Indochinese coins." 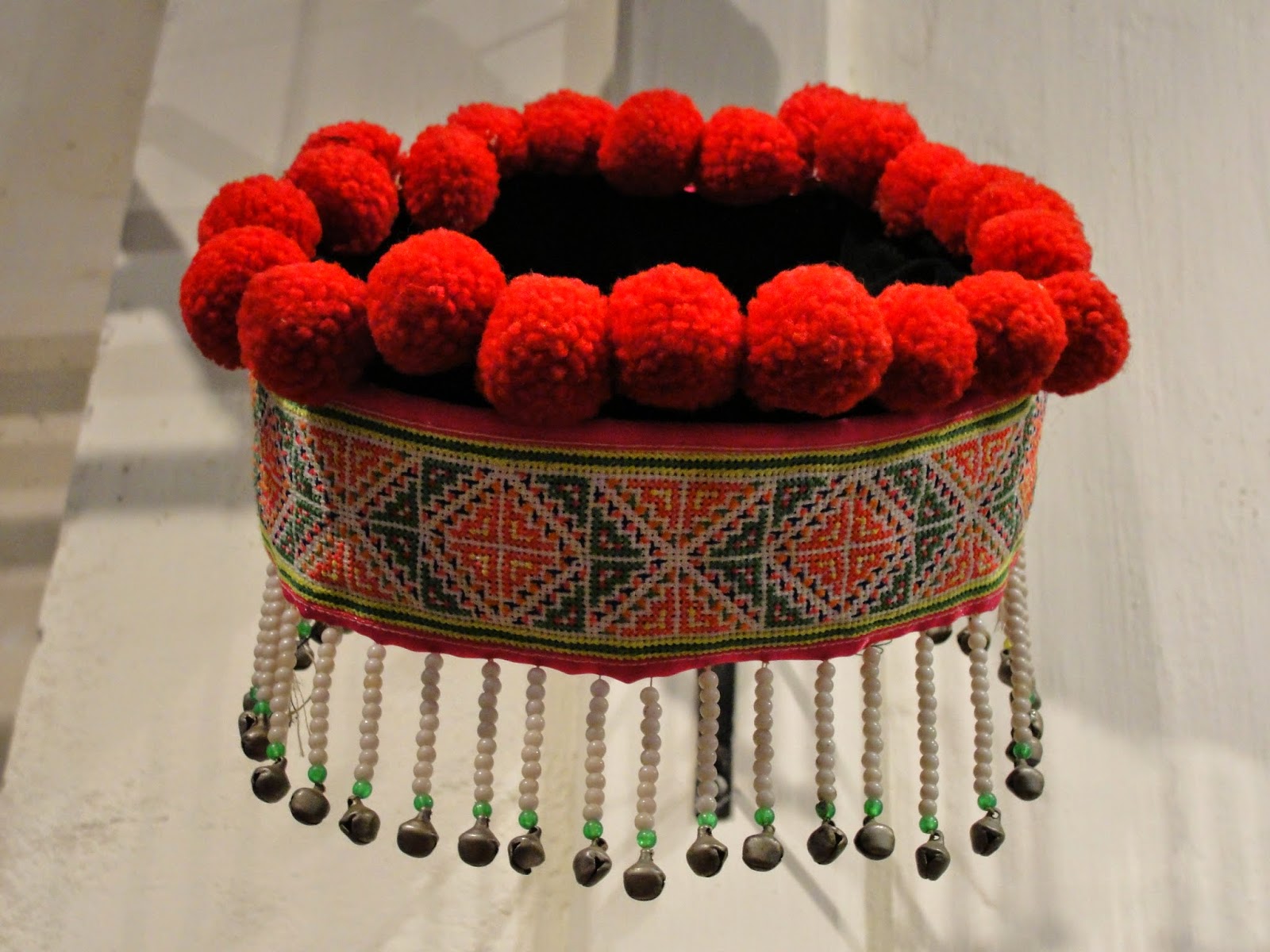 No additional description given. I do know that the Hmong are known for their embroidery. Their traditional clothing is really intricate. 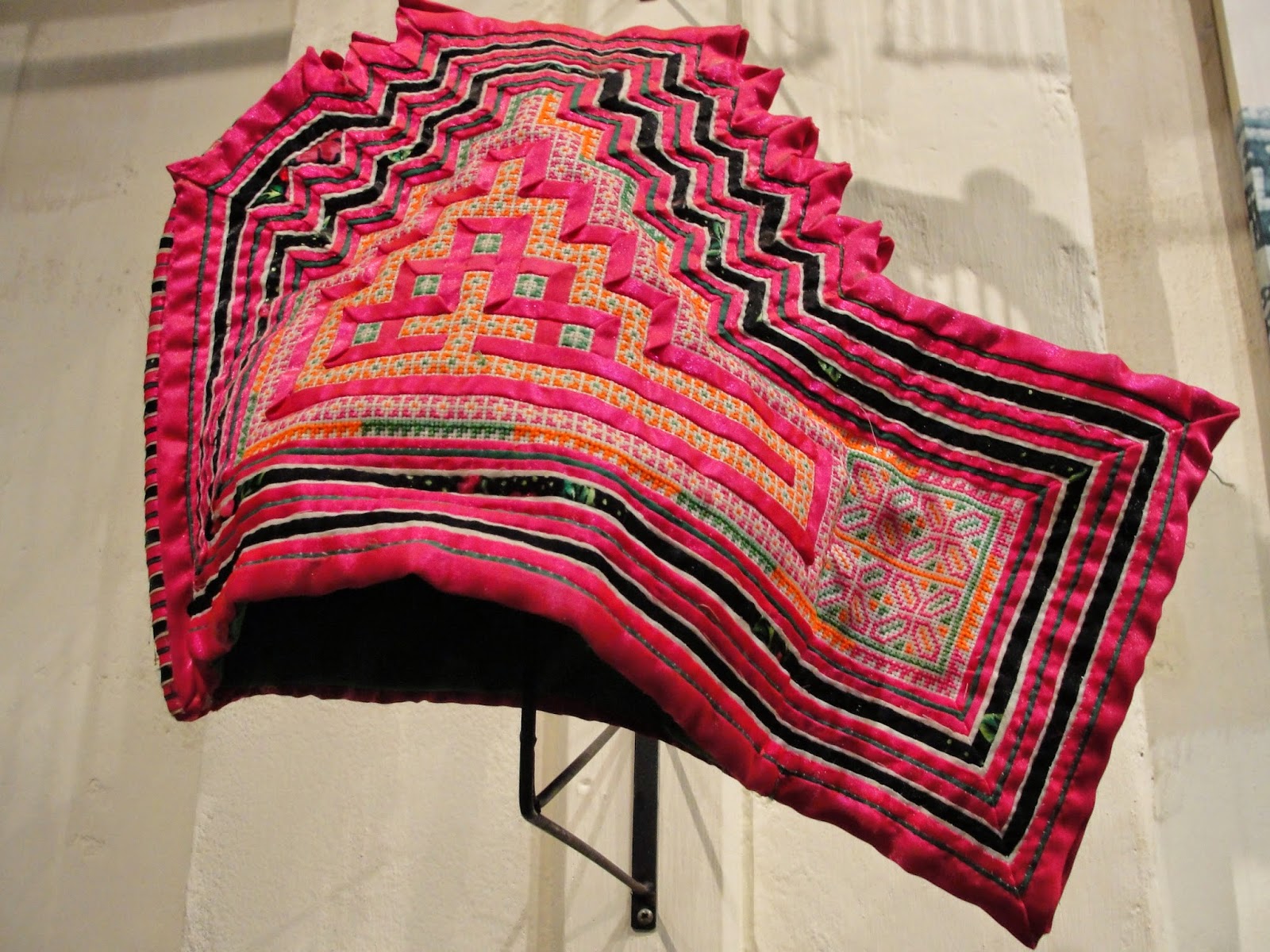 "This hat was made by a Mong woman in Minnesota as a gift to her cousin in Laos. It is also suitable for one's funeral garb - (H)mong will keep one set of traditional clothes to be buried in when they die."

And thus ends the anthropology lesson for the day... I hope you enjoyed what now feels like my elementary school book report on Lao village hats. You can read more about Lao culture briefly here or much more extensively here or here. (Do it! It's really interesting!)

And last but not least, a hat that is on its last legs... 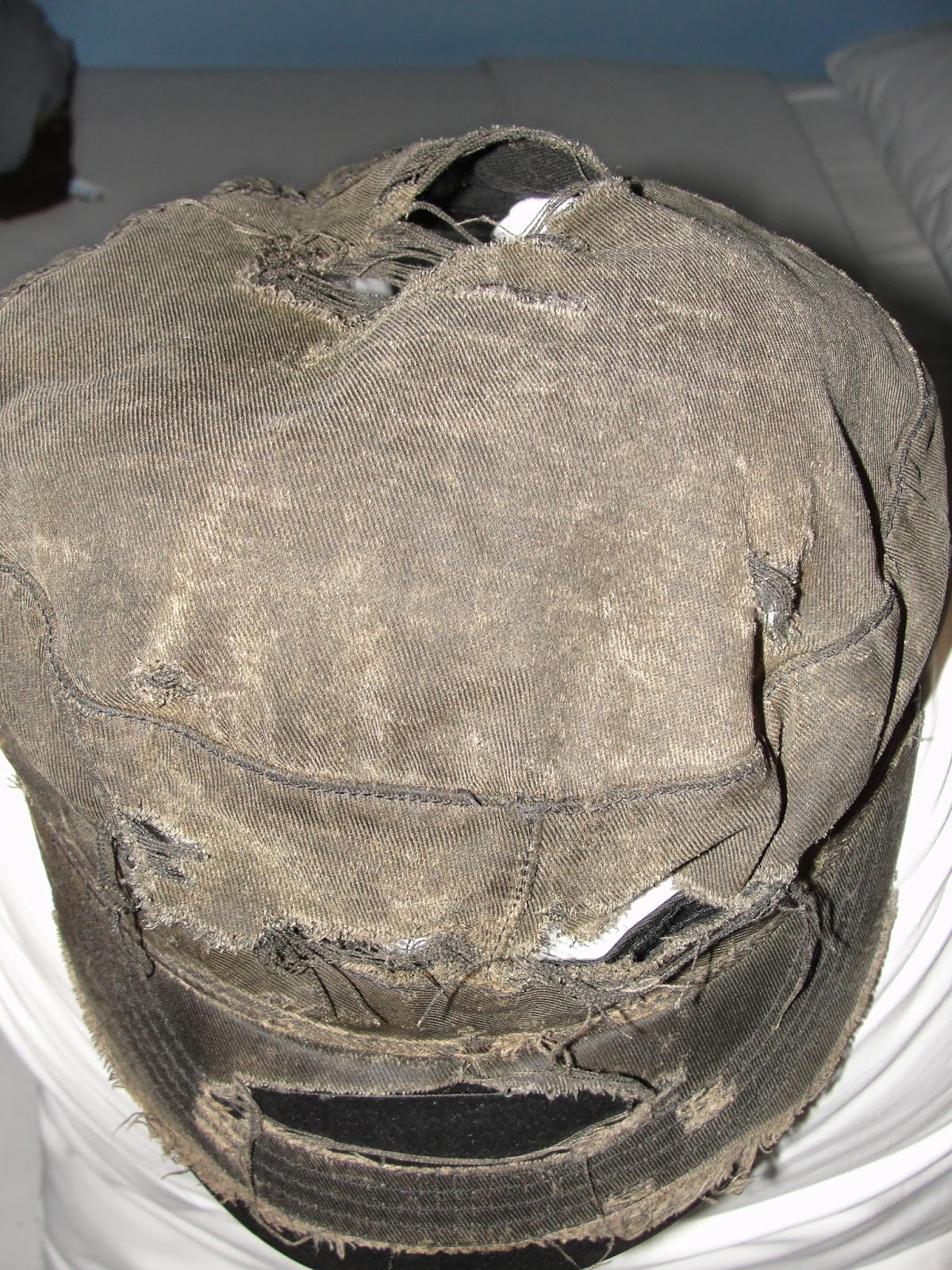 It's definitely seen better days... Maybe we should get some pom-poms to cover up the holes?
Posted by Jen
Email ThisBlogThis!Share to TwitterShare to FacebookShare to Pinterest
Labels: asia, lao