Chiang Mai - we get it now.

Bigger cities have become places where we try new foods, window shop at all the various markets, pick up necessities, and maybe get in a little culture. Otherwise we rest up, hunker down, and try not to spend money... Easier said than done when consumerism is all around you!

Two necessities specific to Chiang Mai were a trip to the US Consulate for Jen to get more passport pages (the only city where this could be done for the foreseeable future) and a long-time-coming routine dental cleaning (Thailand is THE place to go for dental care, it seems). Figuring those things would take two days, and seeing a long list of "must see/do" activities in the area, we decided to plant ourselves for a week and check out the city that everyone seemed to think we would love.

We weren't sure what to make of the Old Quarter, our home for two nights. Graffiti-lined streets with cafes, tuk-tuks wanting to take us to the local temples and waterfalls, tour agencies with treks and elephant camps, a pretty gross "tourist bar row", and a market everywhere you turned... It felt a lot like everywhere else we'd already been. 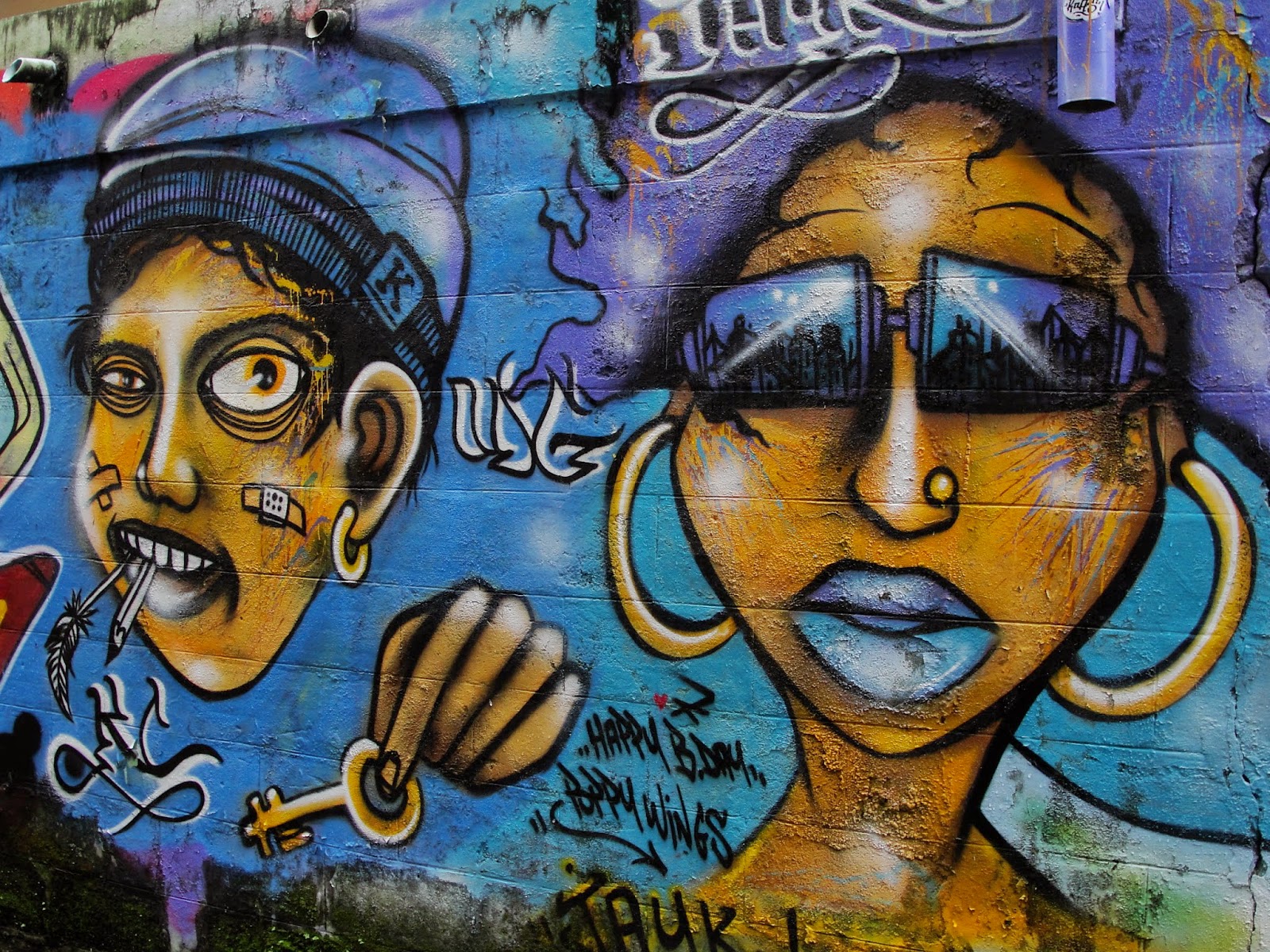 OK, this was a little different 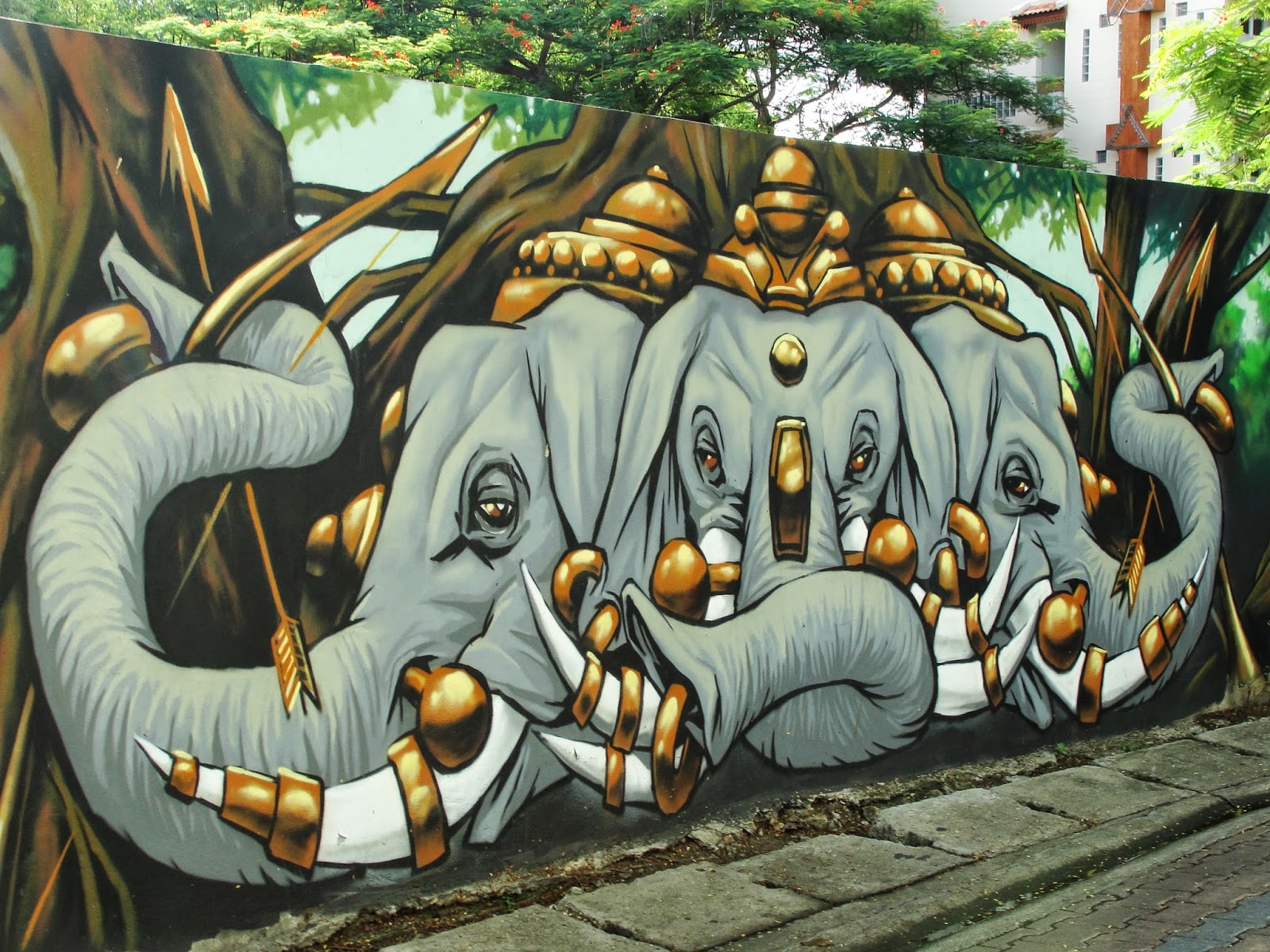 But thanks to a friend of the family we got an apartment to ourselves for almost a week. Staying about a 15 minute walk from Old Quarter - instead of in it - was a much more pleasant experience. We ate at local noodle shops, we cooked at home, we meandered a lot, and we enjoyed the local Saturday flea market featuring everything including work clothes for our upcoming WWOOF gig and the kitchen sink. 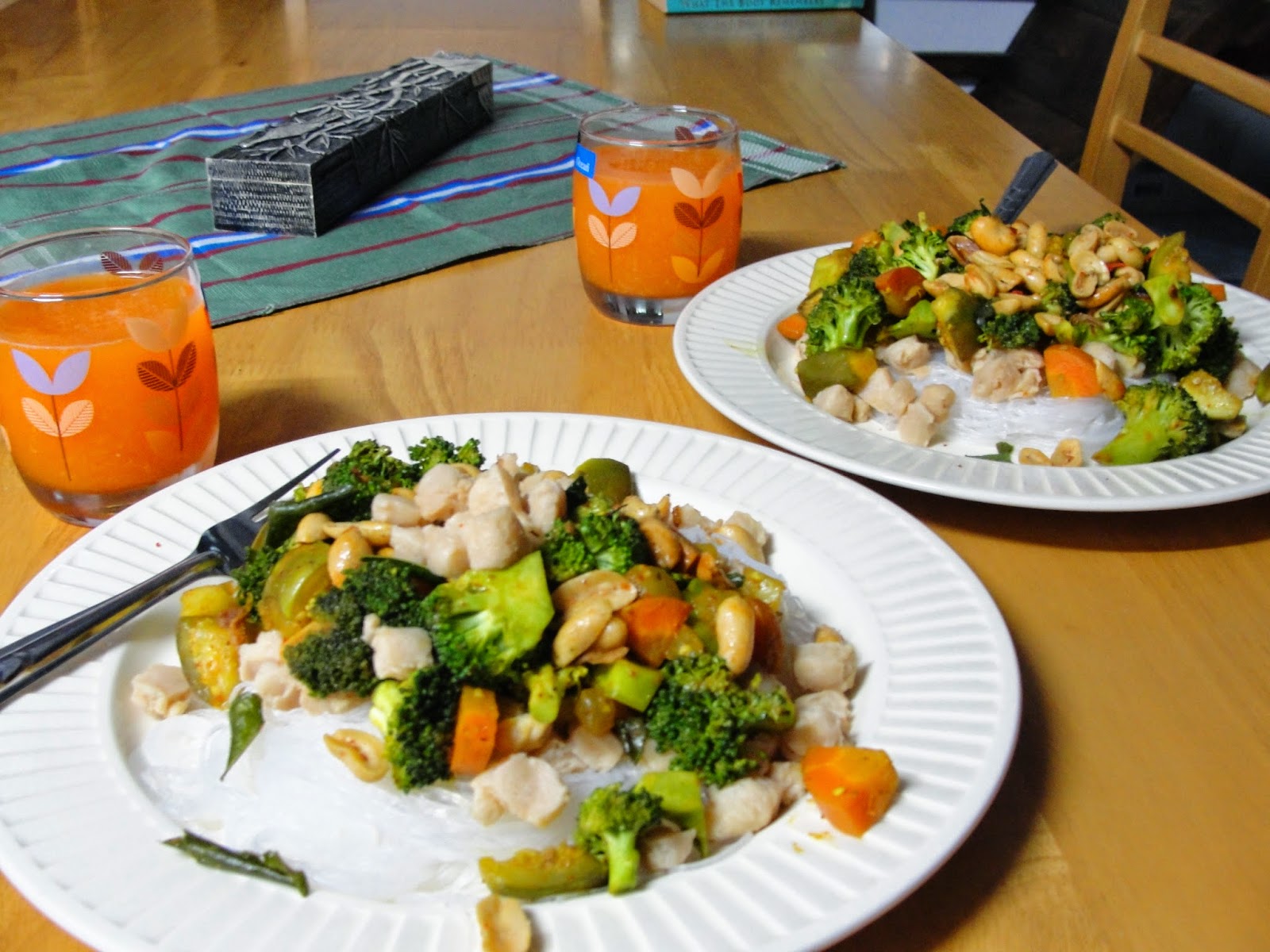 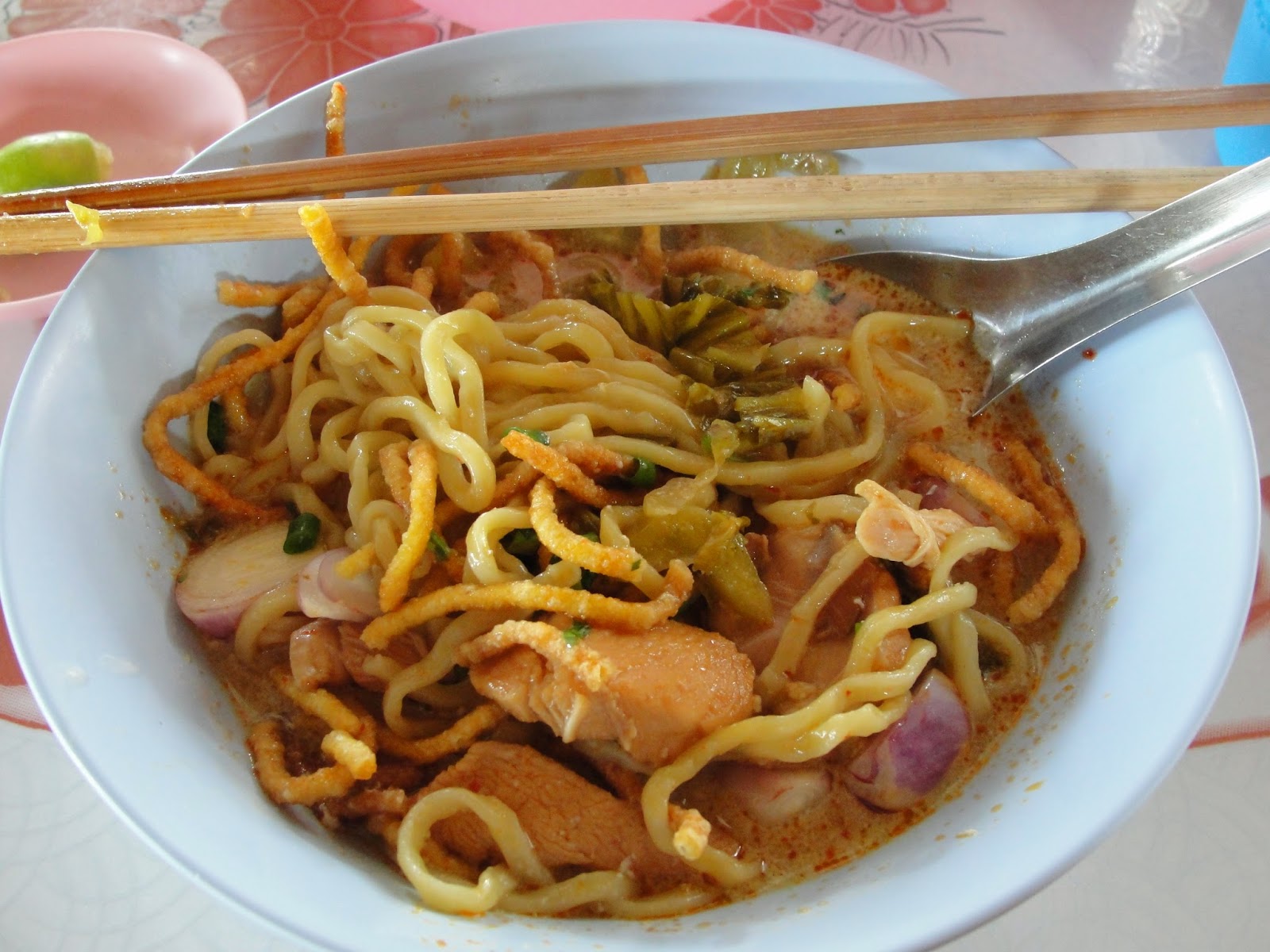 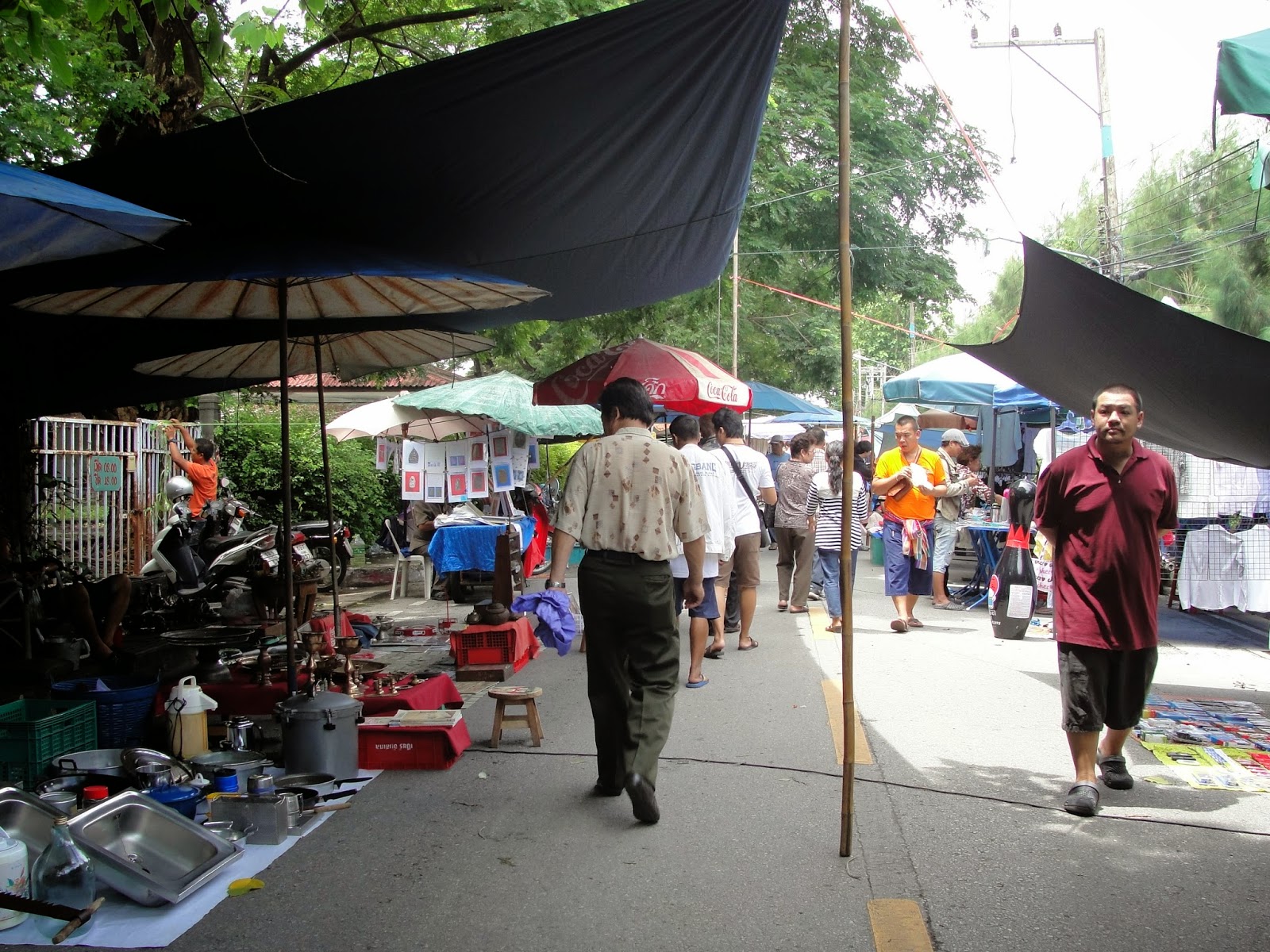 no, really - the kitchen sink

And we got out a bit too. Elephant tours are a big draw in Thailand but we weren't interested in riding. Elephant Nature Park, a sanctuary for injured or otherwise rescued elephants (and dogs and cats), came highly recommended by our animal loving friends so we hemmed and hawed for three days and finally, begrudgingly, shelled out the $80 each on a day trip figuring this was our only chance to be this close to these enormous-yet-gentle creatures. 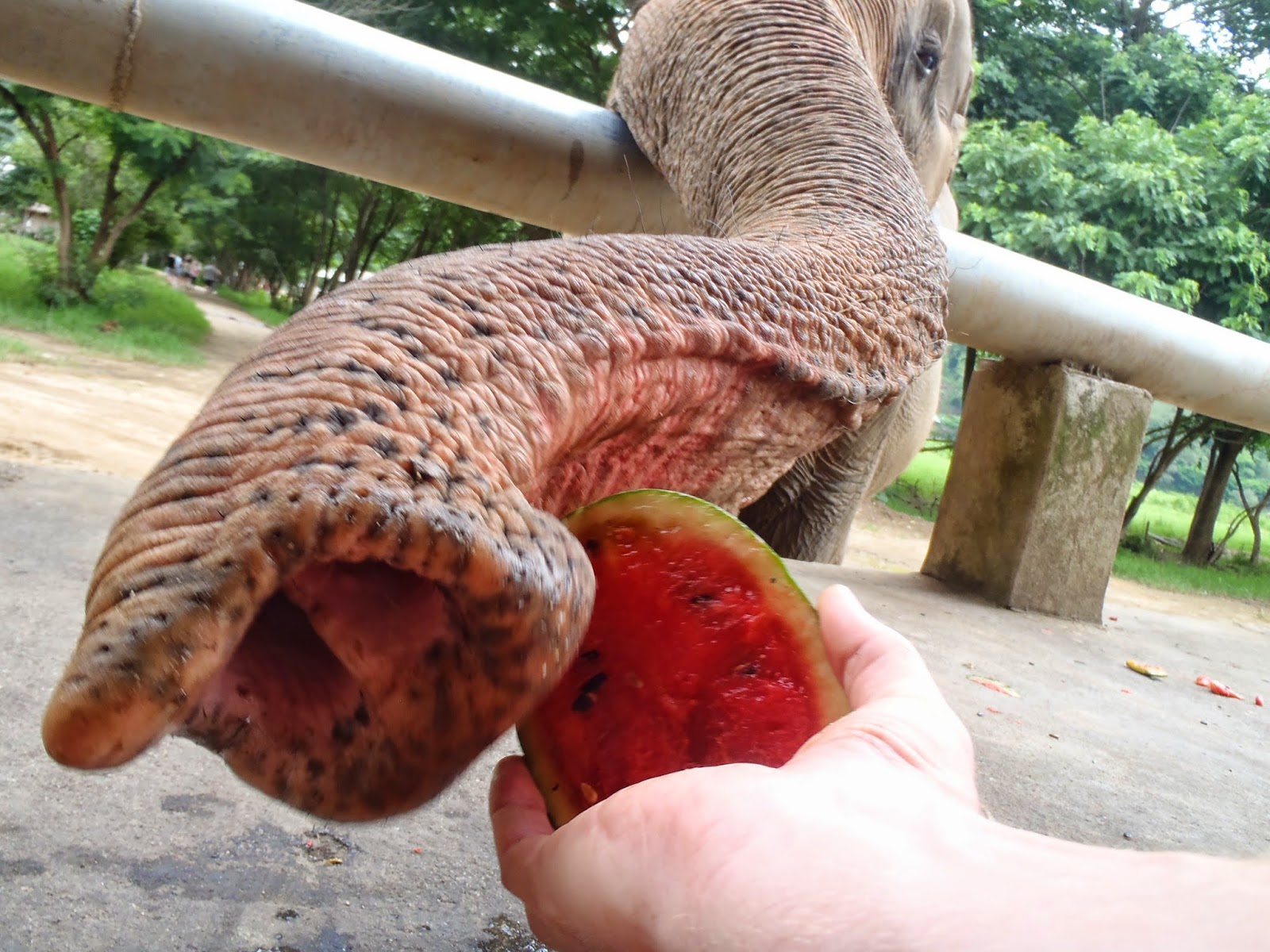 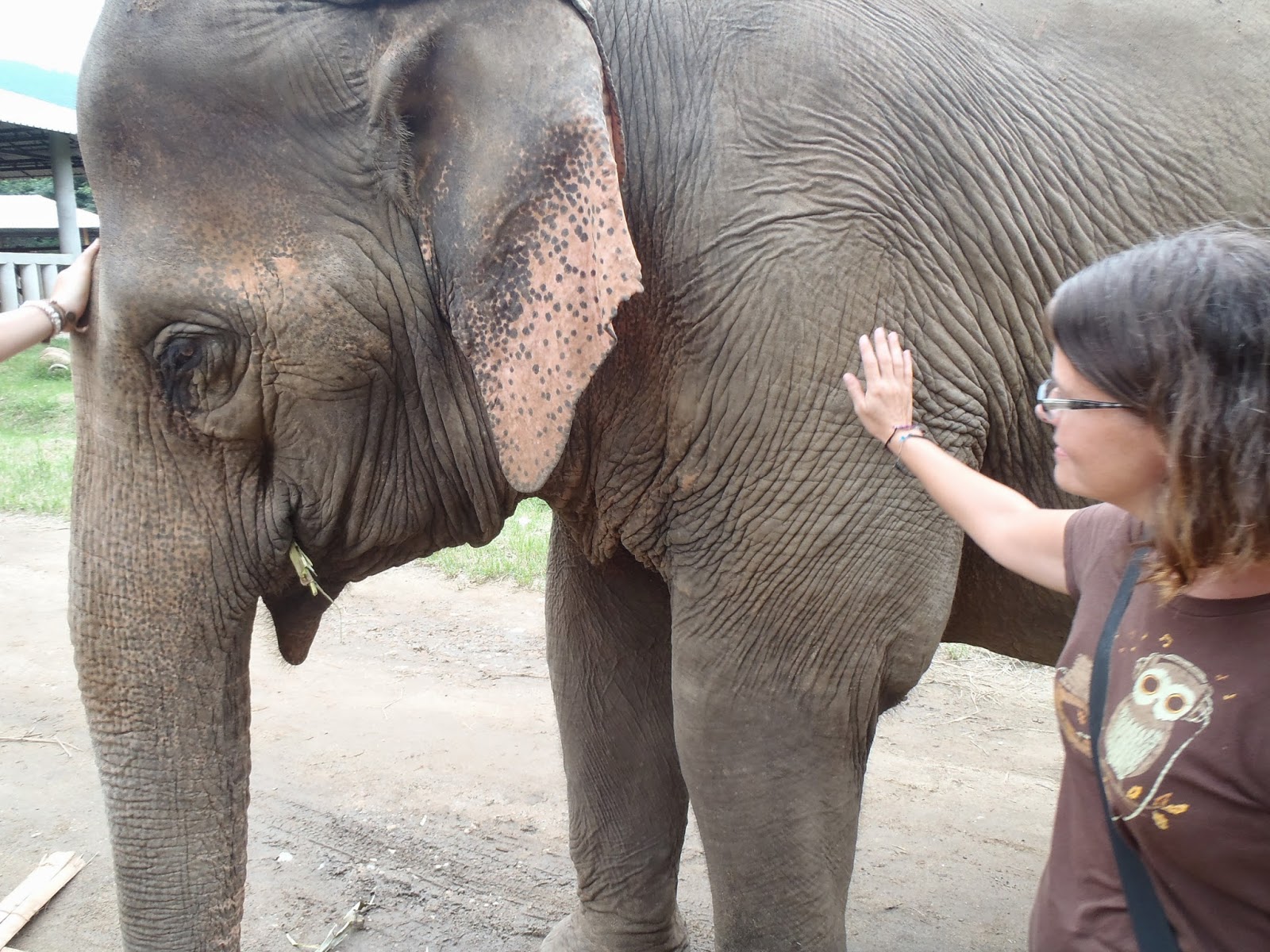 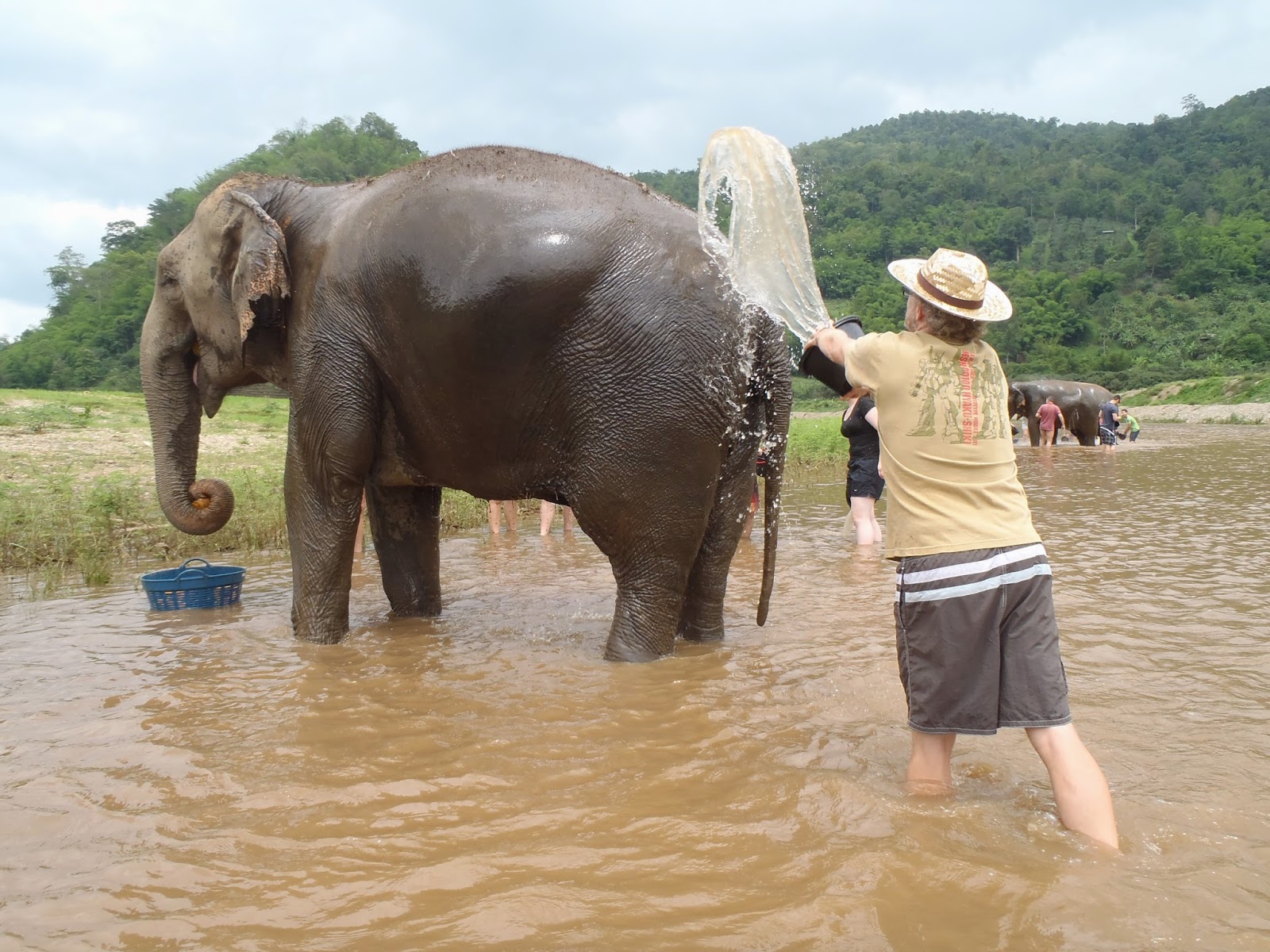 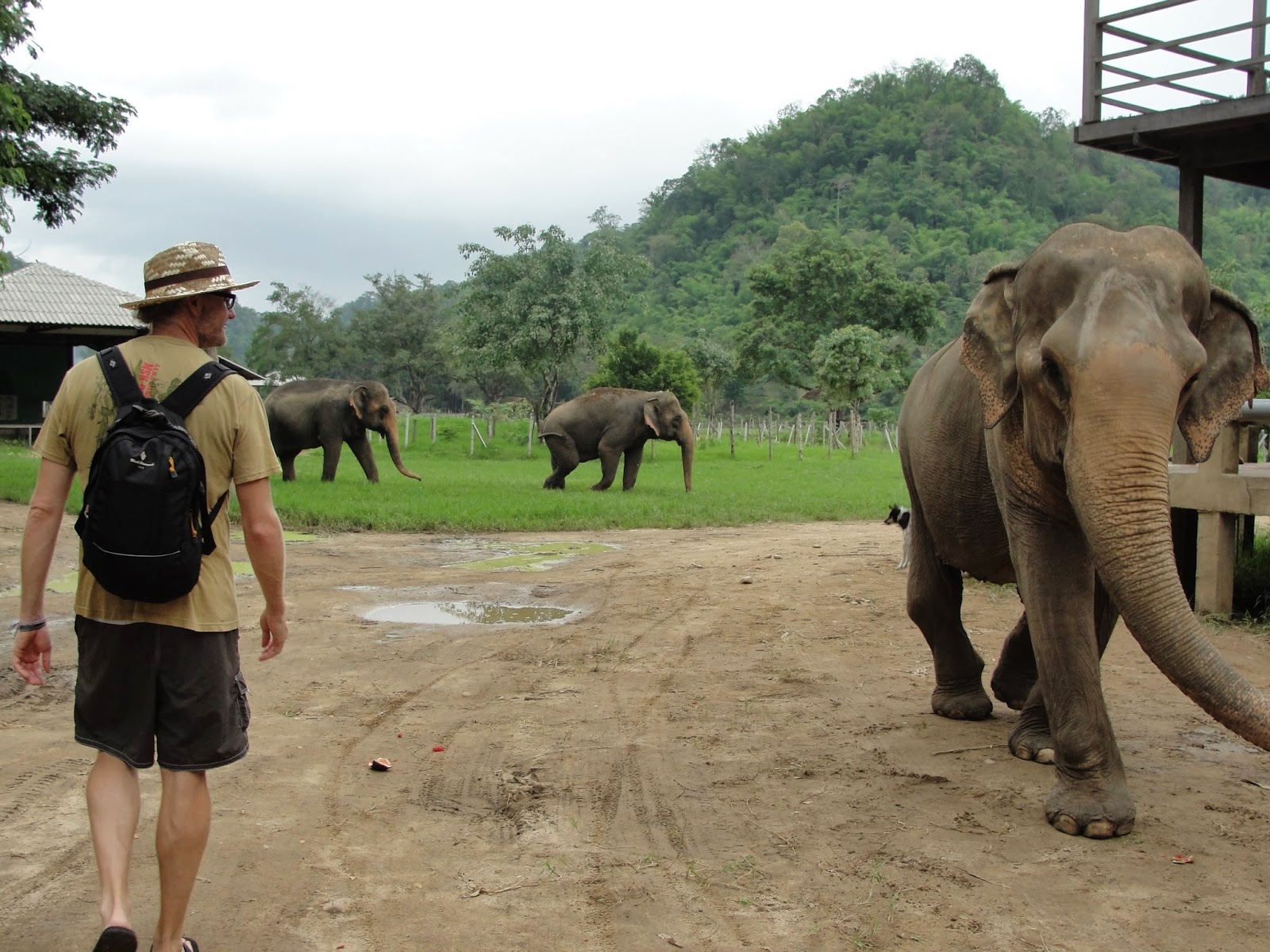 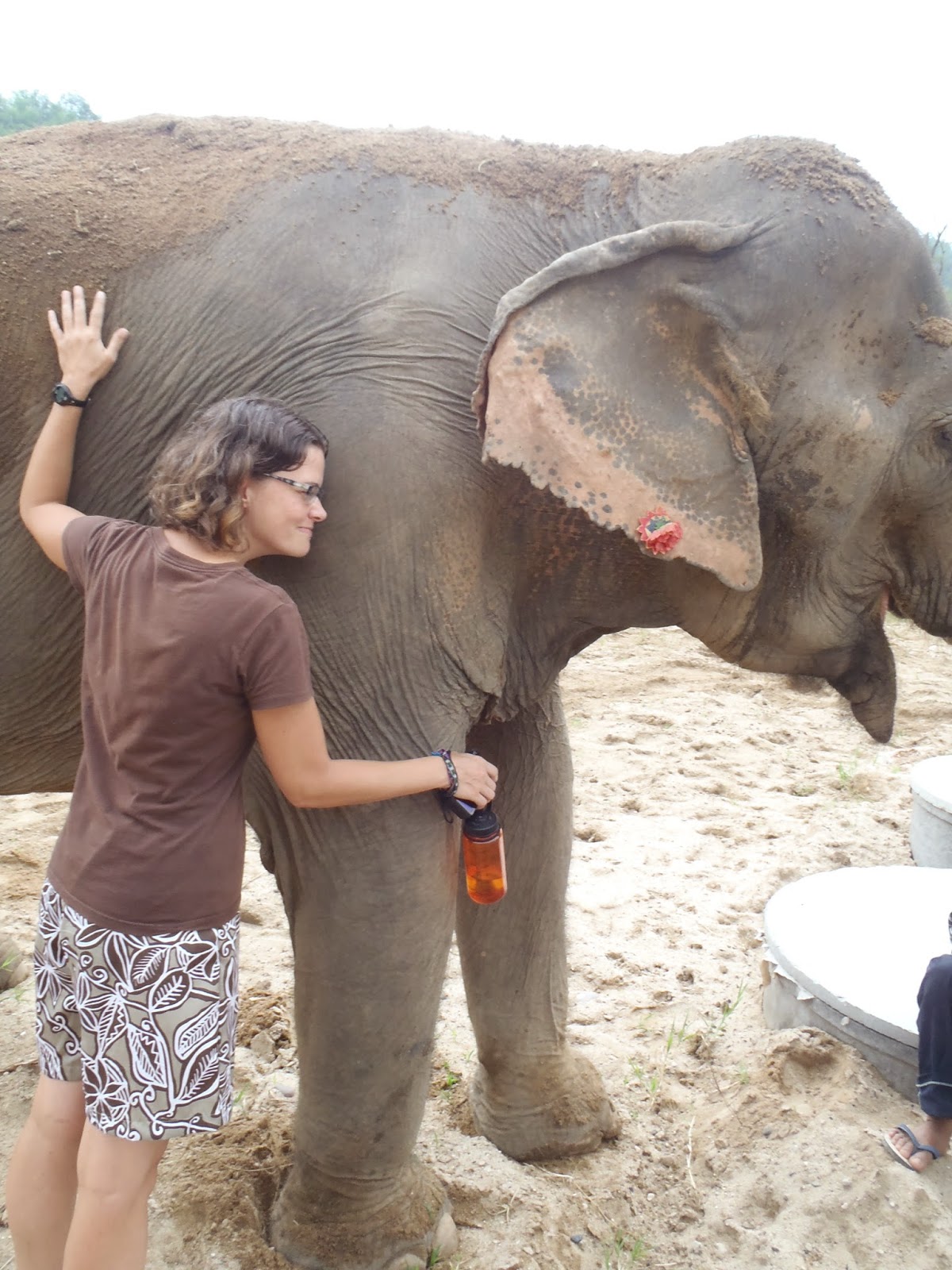 We fed the elephants fruit, toured the grounds, ate a ginormous buffet lunch, "helped" the elephants bathe in the river, fed the elephants more fruit, observed the nine-month-old baby, hugged a few elephants, and watched a few educational videos. Many more pictures can be found starting here... The highly structured day went by very quickly and we left feeling good about our donation to the cause. (For about $400 a week you can volunteer at ENC - next time!)

Chiang Mai's temples are a big tourist draw, so we spent a day wandering around the Old Quarter admiring the architecture. Pictured below is the main temple area downtown; we meandered into several other wats as well. They're all pretty, but like European churches and Turkish mosques, they do all start to blend together after a while. 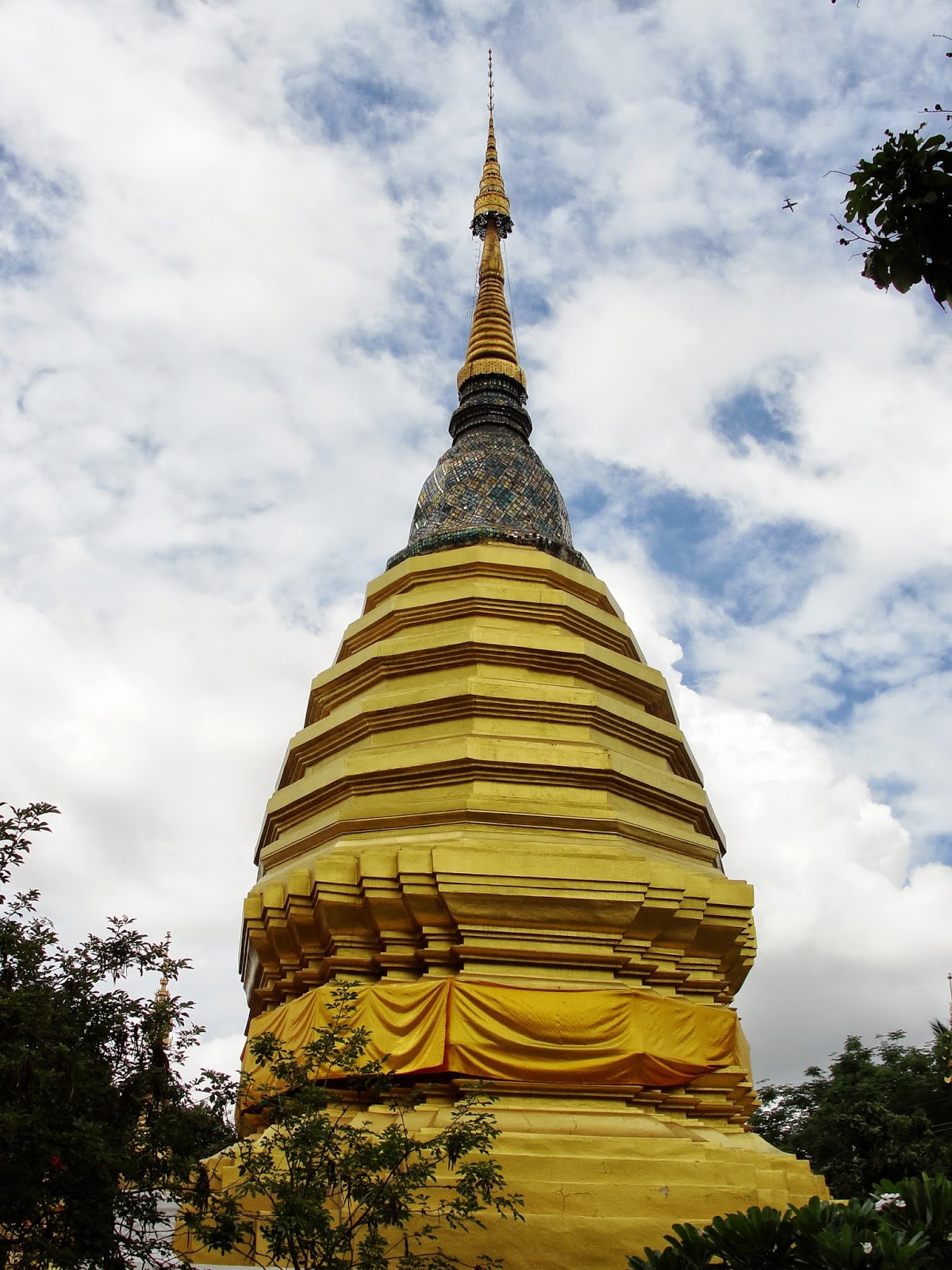 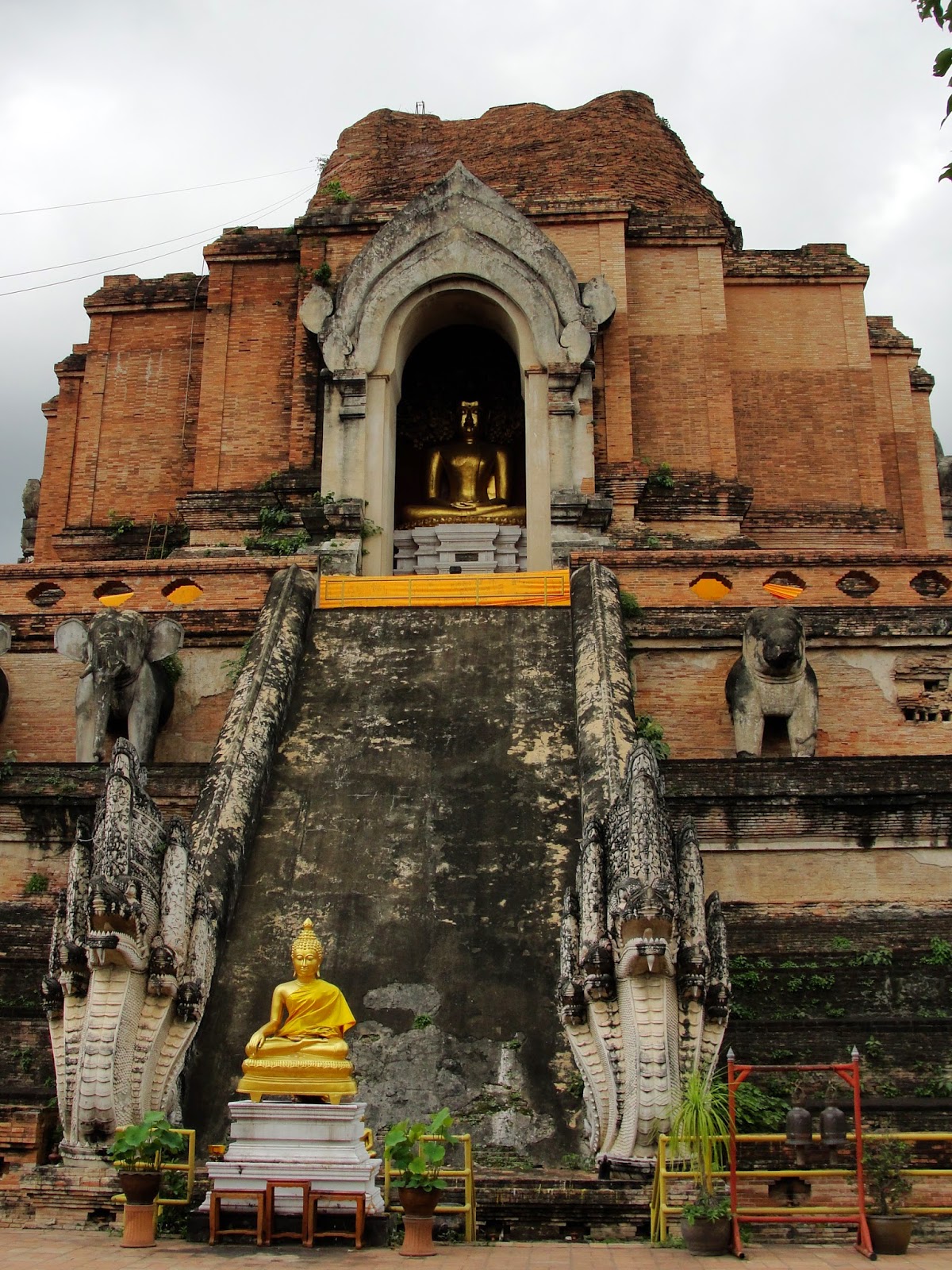 We didn't visit Wat That Doi Suthep because of the many cautions about it being overrun with tourists (and also because we were lazy and fairly watted out).  But check out the photos in the link above - it looks pretty cool.

The city also recently completed a sort of triple crown of museums - the Lanna Folklife Museum, History Museum, and Arts and Culture Museum (180 baht gets you into all three if the ticket is used within a week period, and they're all right next to each other so there's no reason not to visit all three). The Arts and Culture Museum was a bit lacking in descriptions and exhibits but the other two were really informative about the Lanna culture and Chiang Mai's history, particularly with regards to the trade industry back in the day and how India and other regions influenced the local culture. 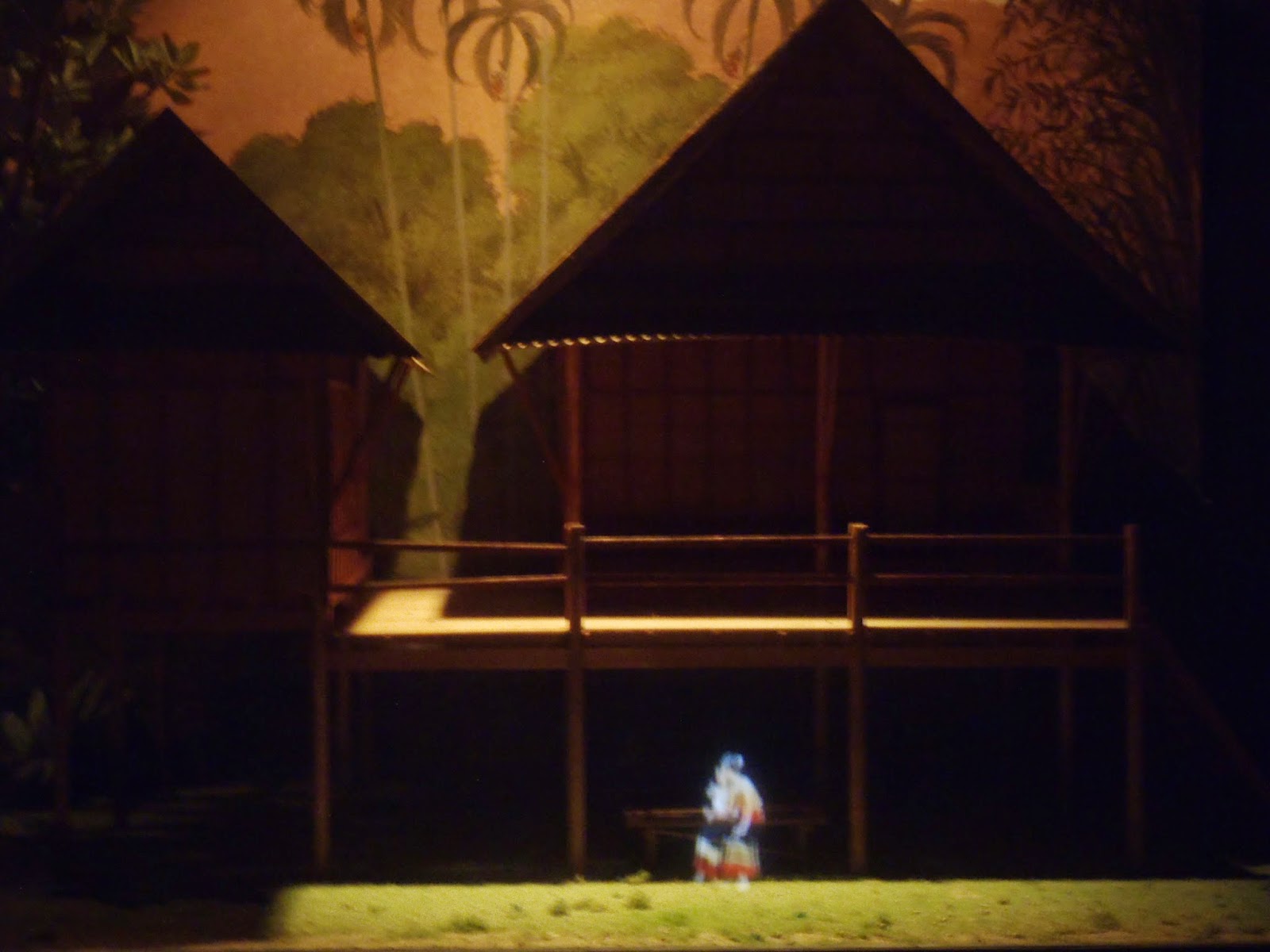 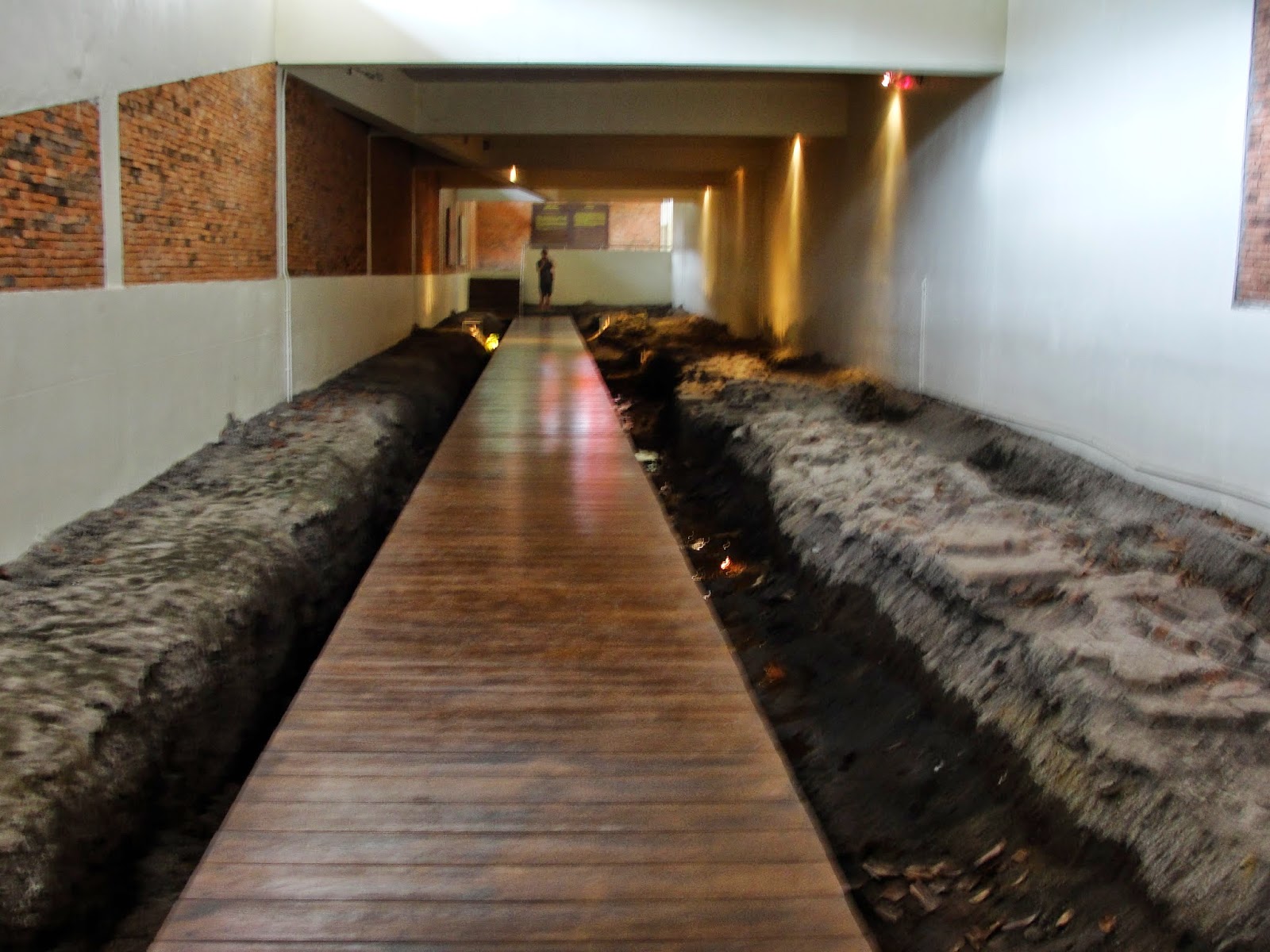 archaeological dig at the History Museum

Another Chiang Mai draw is the Sunday night walking market. It was indeed massive... 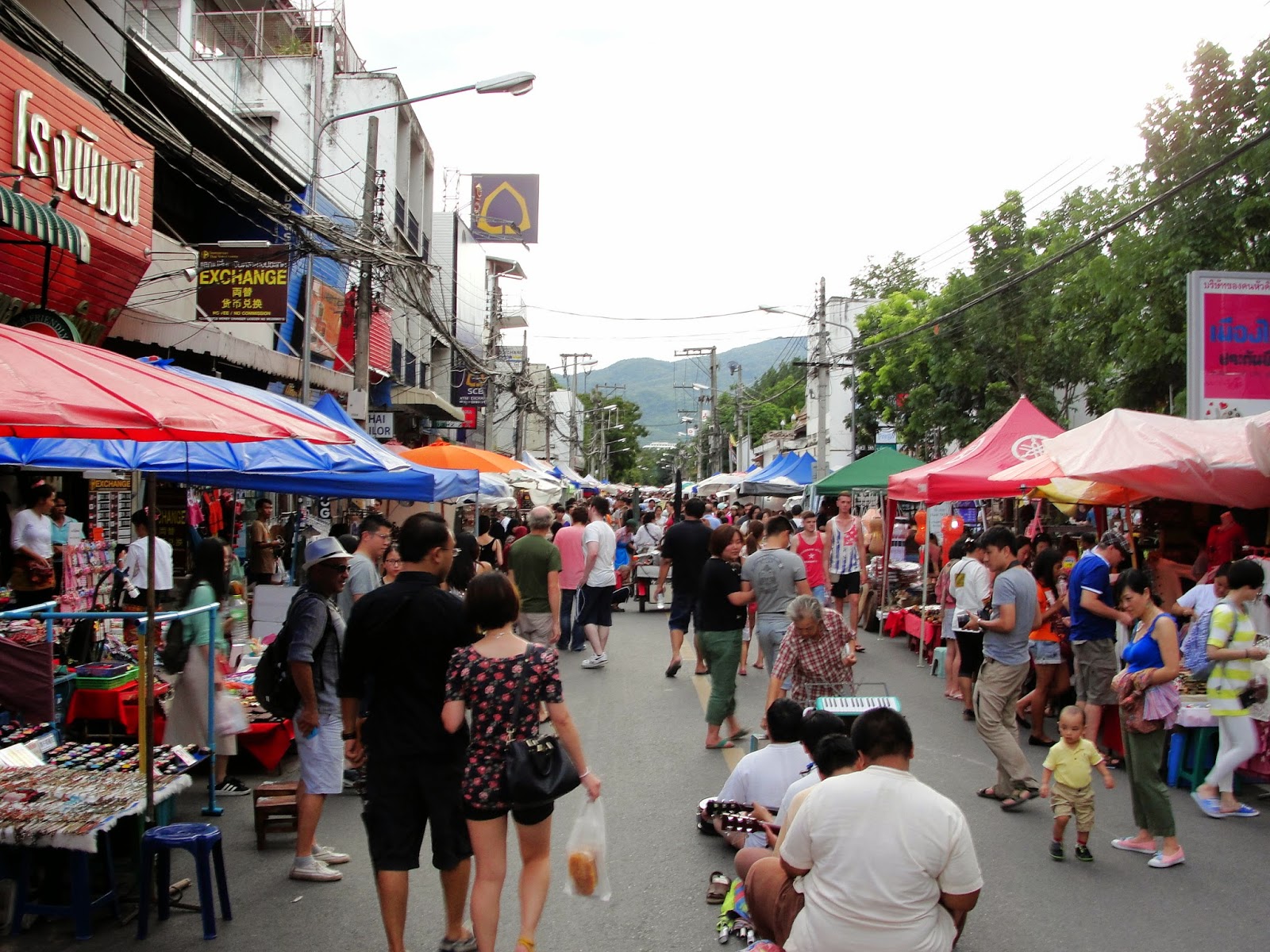 just one of the many blocks of vendors 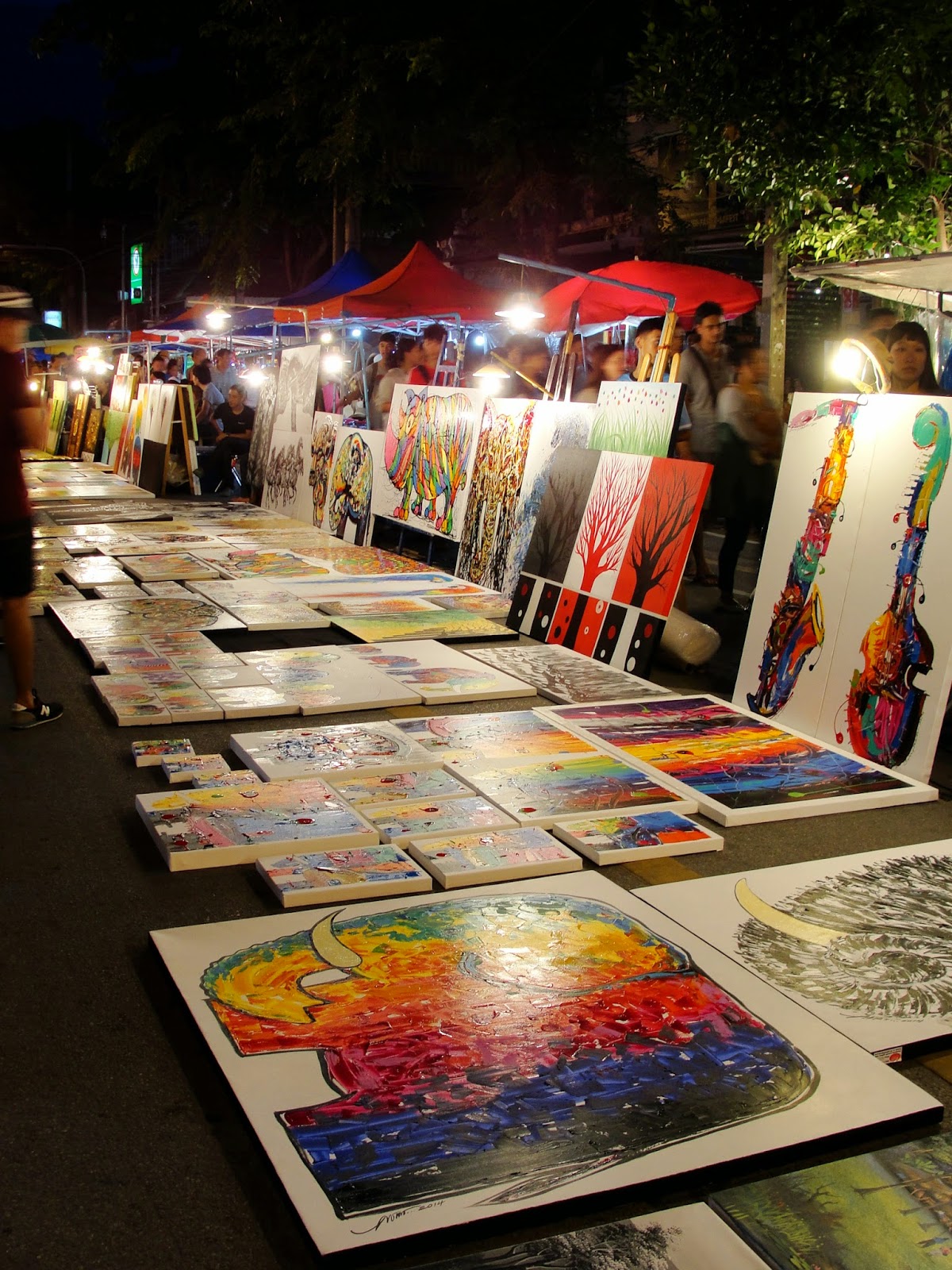 if only we had a wall to hang one of these

... but since we weren't shopping, we spent most of our time deciding which delicious foods to try. 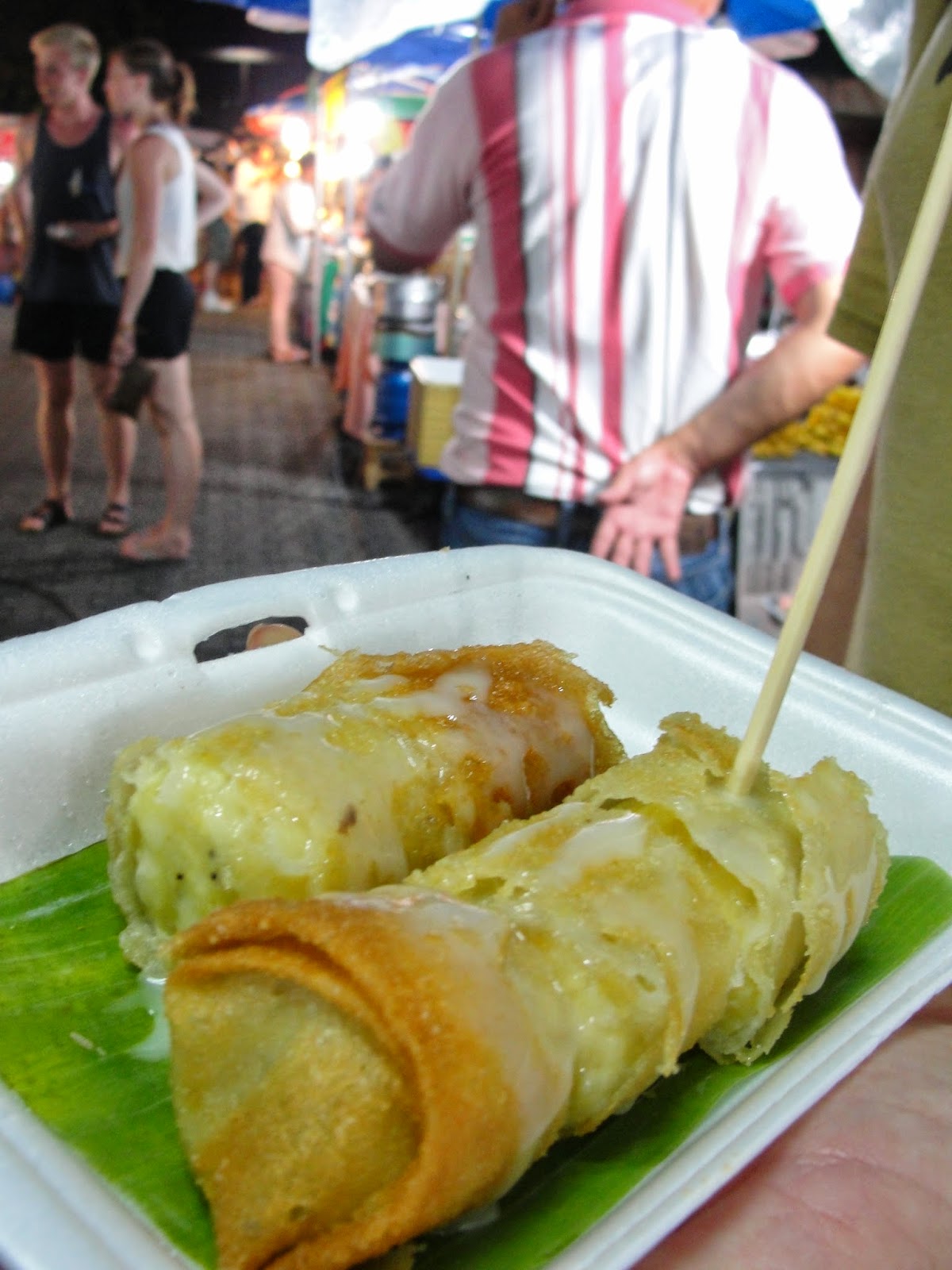 banana wonton snack for the win! 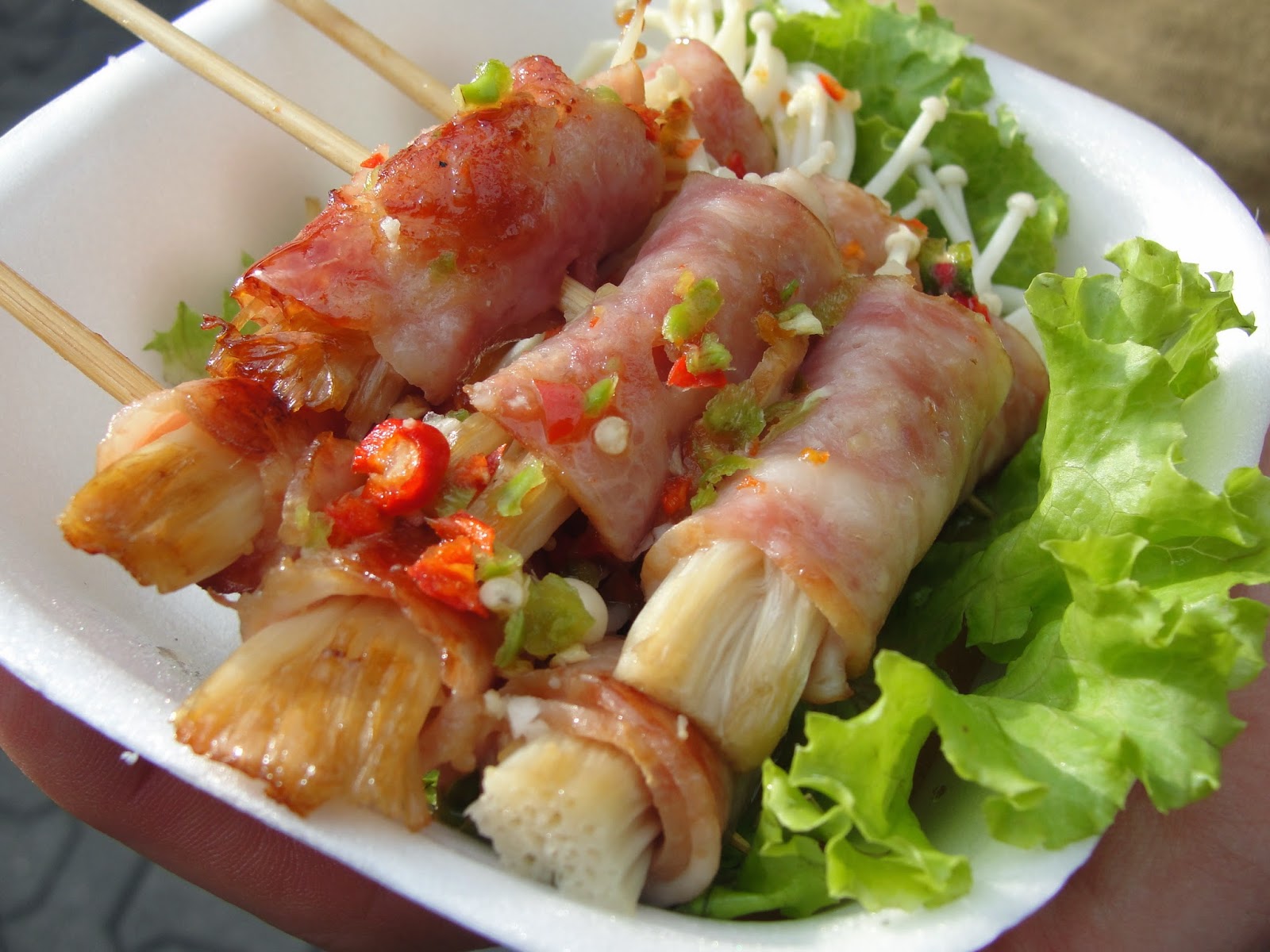 Those are just two of the many snacks we tried - most were gone before I could pull the camera out. The Saturday night market was equally fun in that regard. 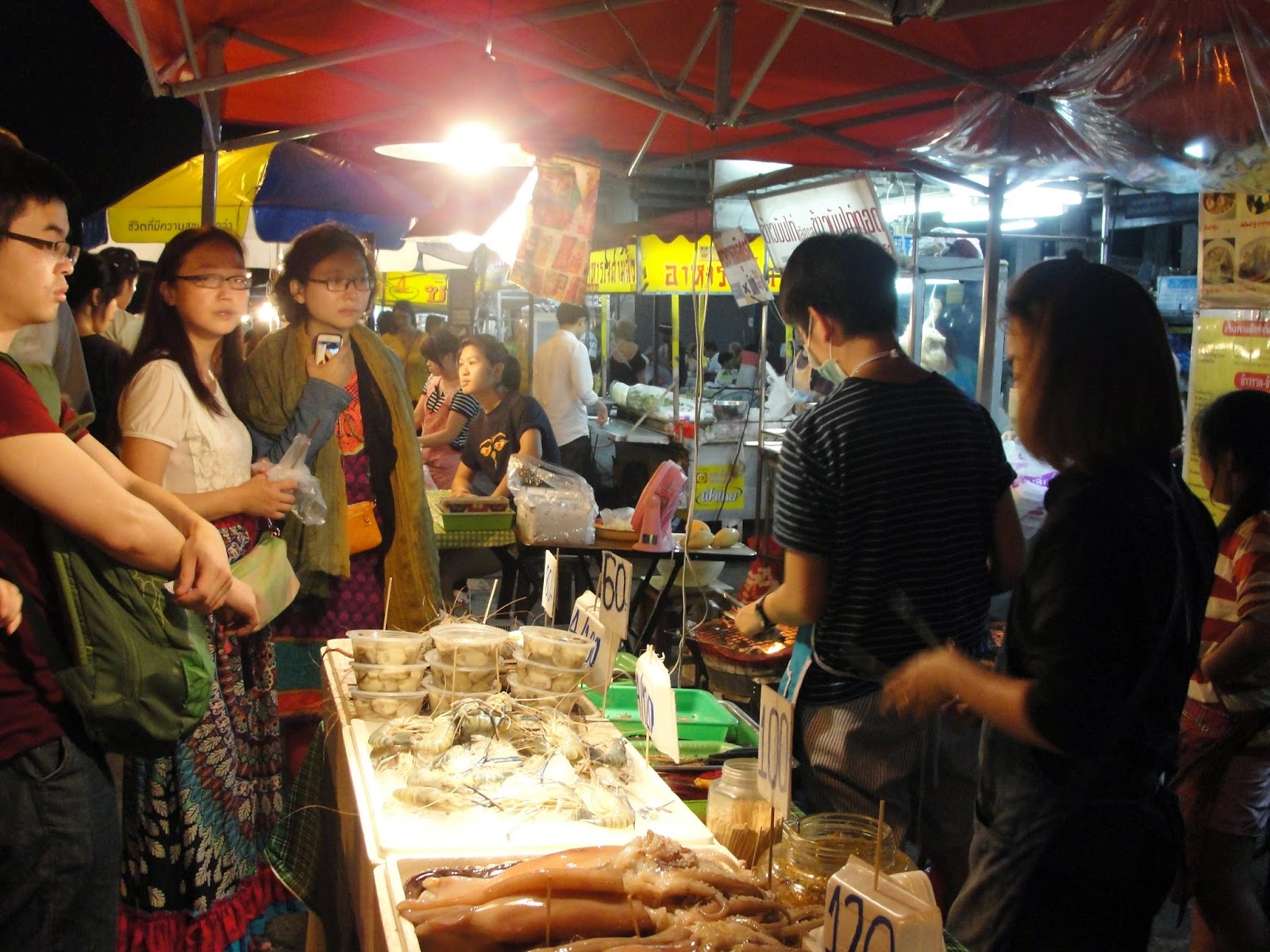 street stalls next to the Saturday night market

While visiting the markets we saw a particularly odd thing that we couldn't really photograph. A loudspeaker announcement periodically came on and everyone would immediately stop walking or stand up while the national anthem was played. As soon as the anthem was finished everyone resumed activity. It was almost sci-fi movie-like, as if a "pause" button was pushed and then released. We didn't see this in Chiang Rai so we're curious to see if this is specific to Chiang Mai and all its patriotic glory.

Anyway. We didn't rent a scooter and go to the limestone waterfall, we didn't go trekking in the hills, and we didn't take a cooking class - we planned to WWOOF in a small village the following week and then head to mountainous Pai so we figured we'd be covered on some combination of these pricey outings sooner or later.

We did finish a couple books, catch up on blogging and photos, sleep a lot, and do laundry whenever we wanted. If our friend's apartment had a hammock and a kitty, we would probably still be there right now. 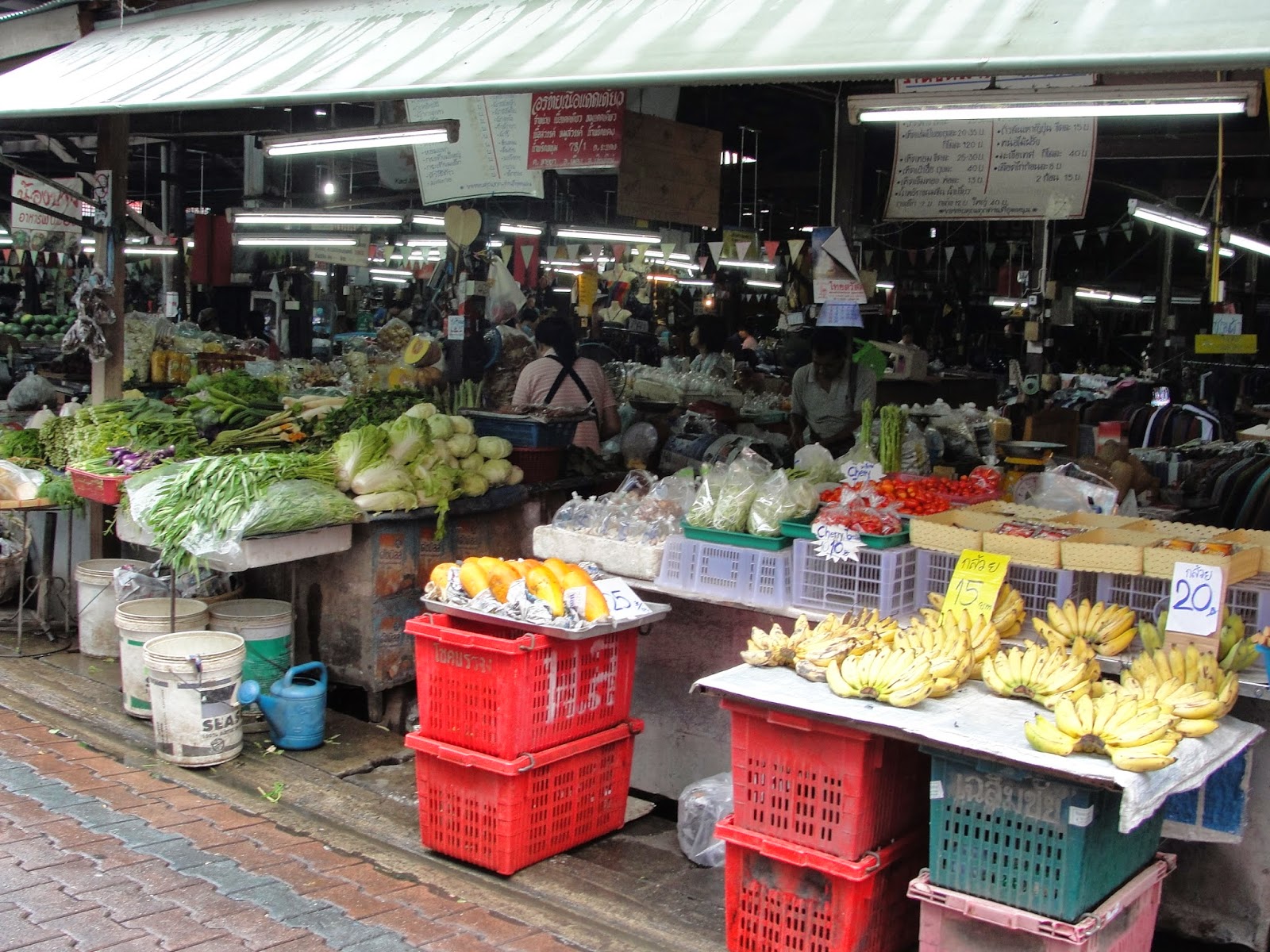 loads of fruit from the many street markets 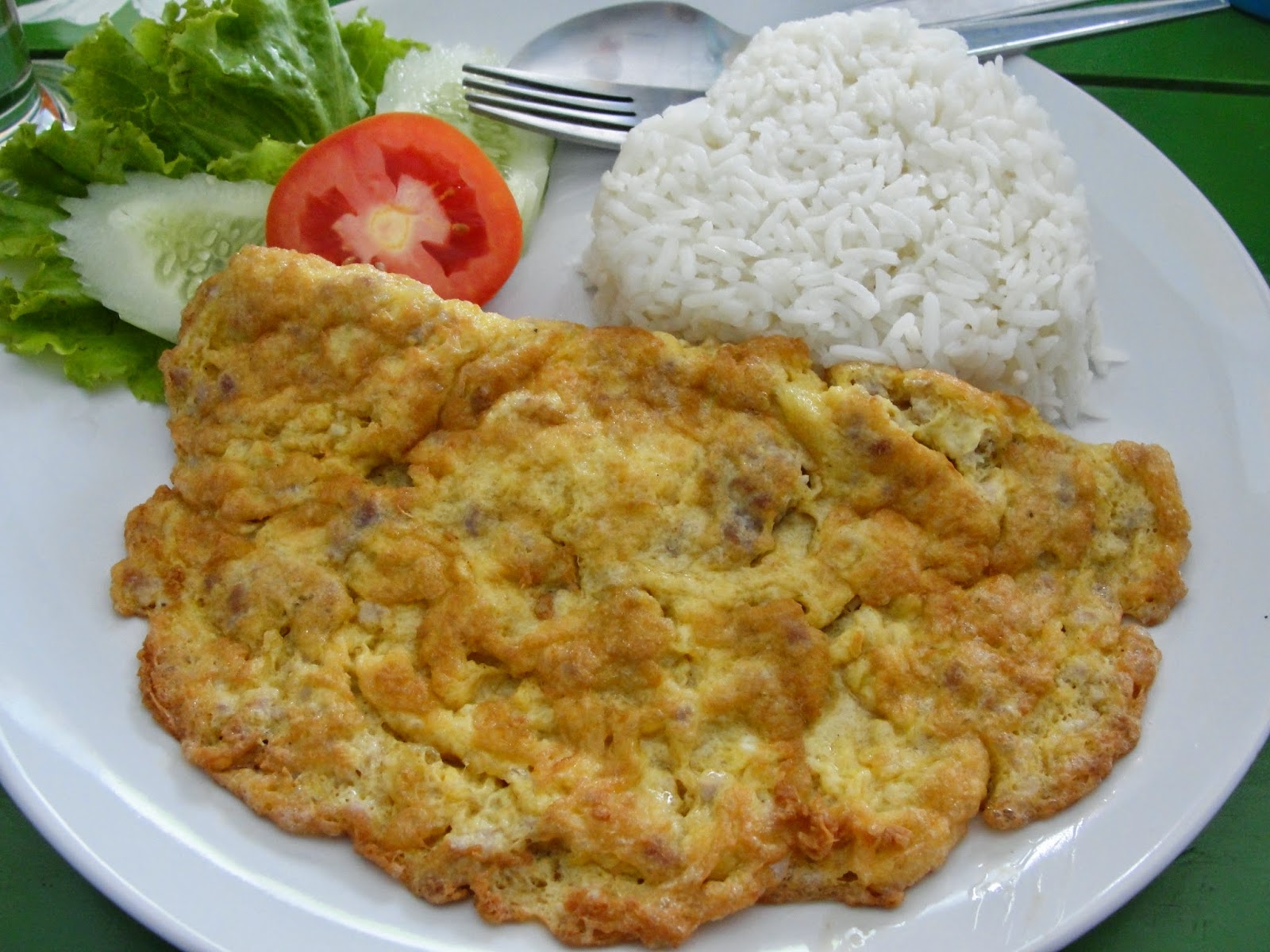 a "Thai omelette" (with ground pork) -
not terribly exciting 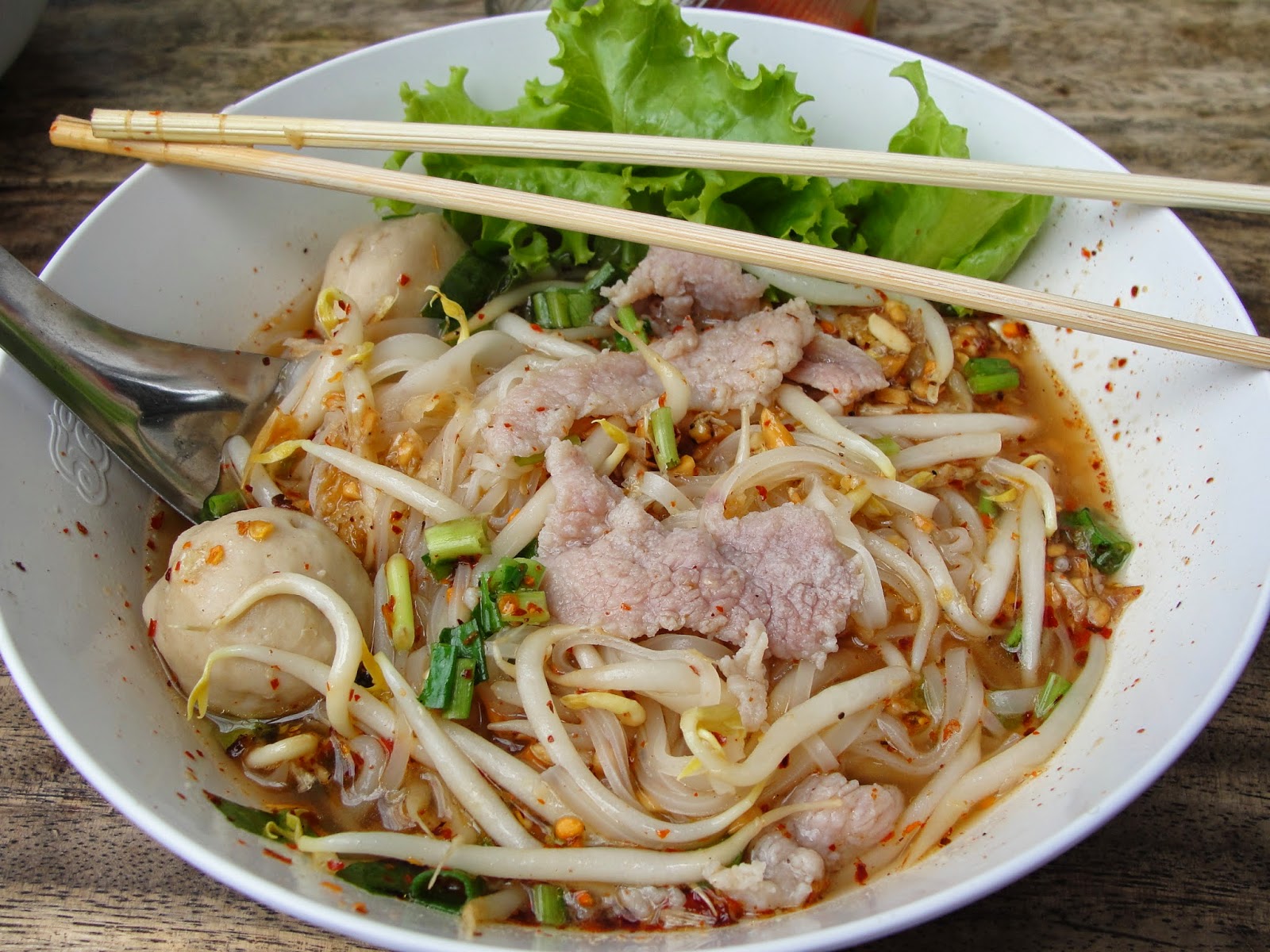 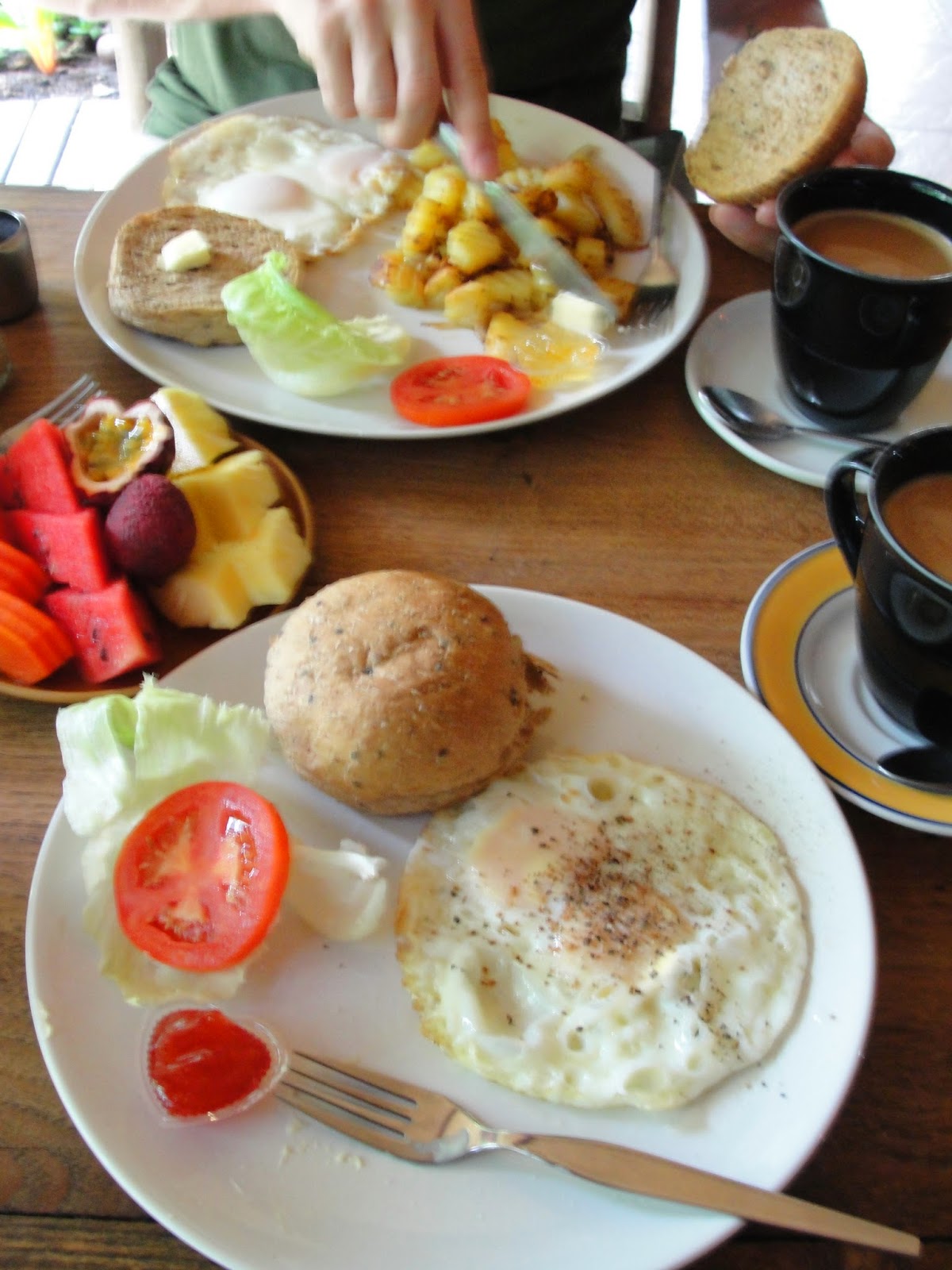 So while we aren't quite ready to ship our meager possessions overseas, we do understand the draw of Chiang Mai. It's an easy, mostly friendly, comfortable city with culture, great food, and all the modern conveniences one could need.

However. There's very little green space within walking distance. There's a small park in the southwest corner of Old Quarter, and the city itself is of course surrounded by beautiful mountains, but we didn't run across any other urban open areas where we could just sit and enjoy the view. Vietnam had this down, and that was a big reason we loved visiting the cities there (as much as we can love visiting cities).

Next up: a week in the hills with a Karen village family going for self-sustainment.  Time to make up for the lack of green space!
Posted by Jen
Email ThisBlogThis!Share to TwitterShare to FacebookShare to Pinterest
Labels: asia, living like a local, thailand