The transition from Lao to Thailand was a lot like that time Jen and Patrick visited Ottawa on Canada Day after two weeks at the Nubian goat farm, or that time Jen and Kim did a serene, stunning, three-day rafting trip down the Colorado River and then went to Vegas. Or that time all three of us went from Vietnam to Laos - only in reverse.

Chiang Rai greeted us with well-paved roads, traffic lights and pedestrian crosswalks, hundreds of 7-11s and Tesco Express stores, streets lined with strip malls, precarious electrical wires hanging overhead, lots of cars (driving on the other side of the road! that didn't blare their horns every five seconds!)... It took us about a day to get over the sensory overload and adjust to life in a "big city" again. 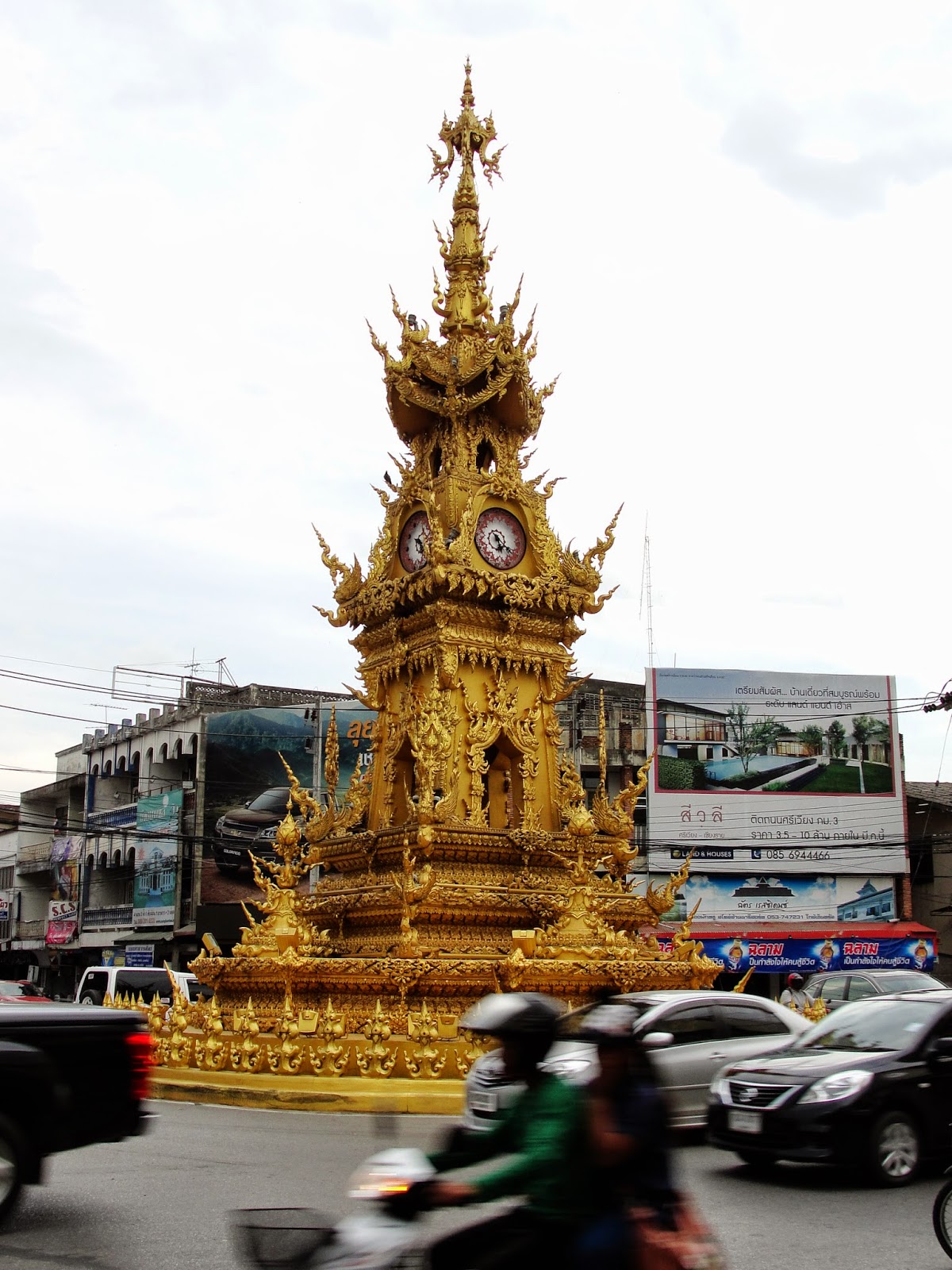 there was also a gilded clock tower roundabout... 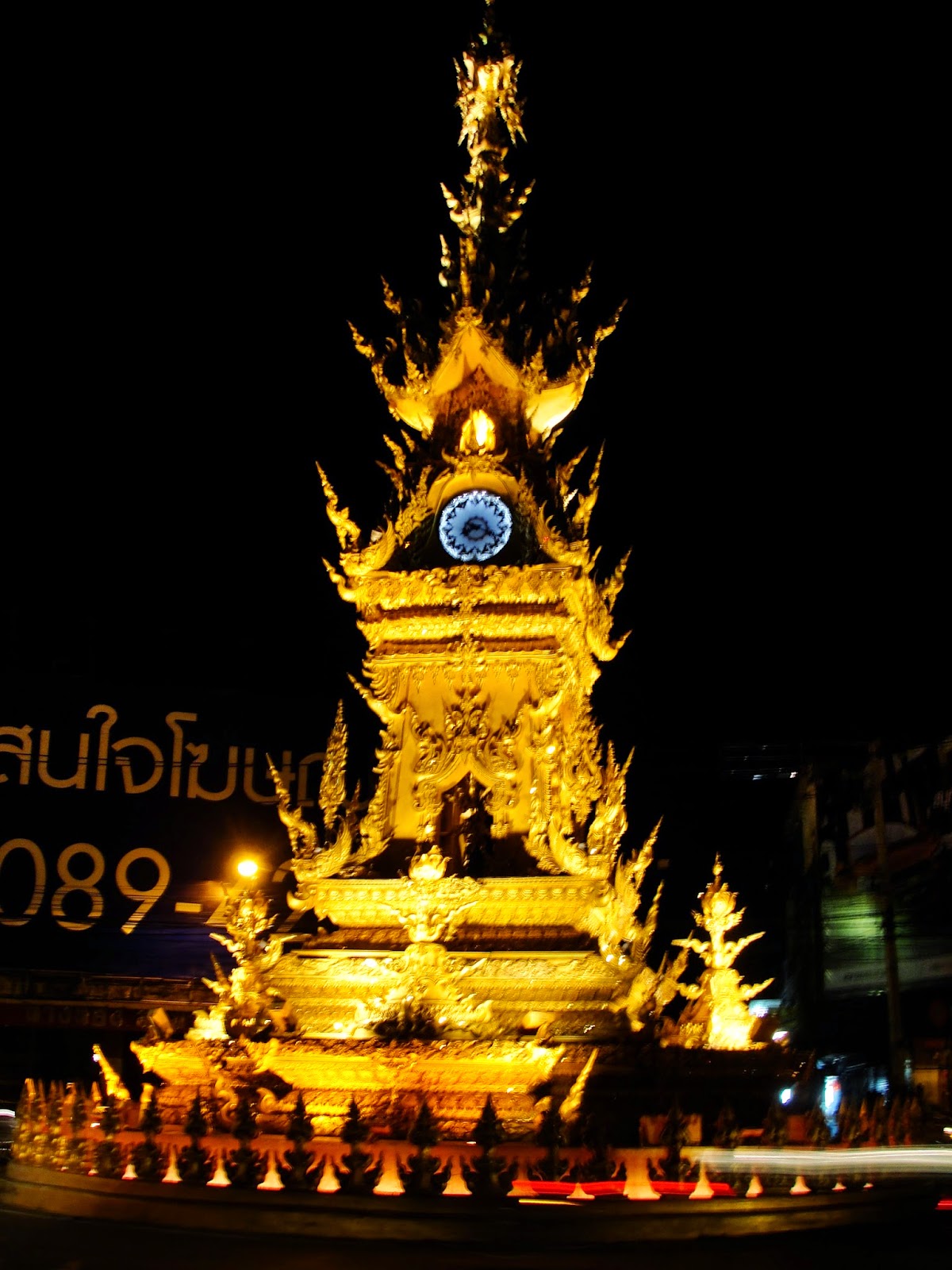 ... that glowed at night

Other than the unexpected statue park in Hue, Chiang Rai was the first time in months we'd seen abstract art - definitely an indication that we weren't in communist territory anymore. The shiny, pristine, surreal Wat Rong Khun (aka "White Temple") just outside of town was pretty stunning... 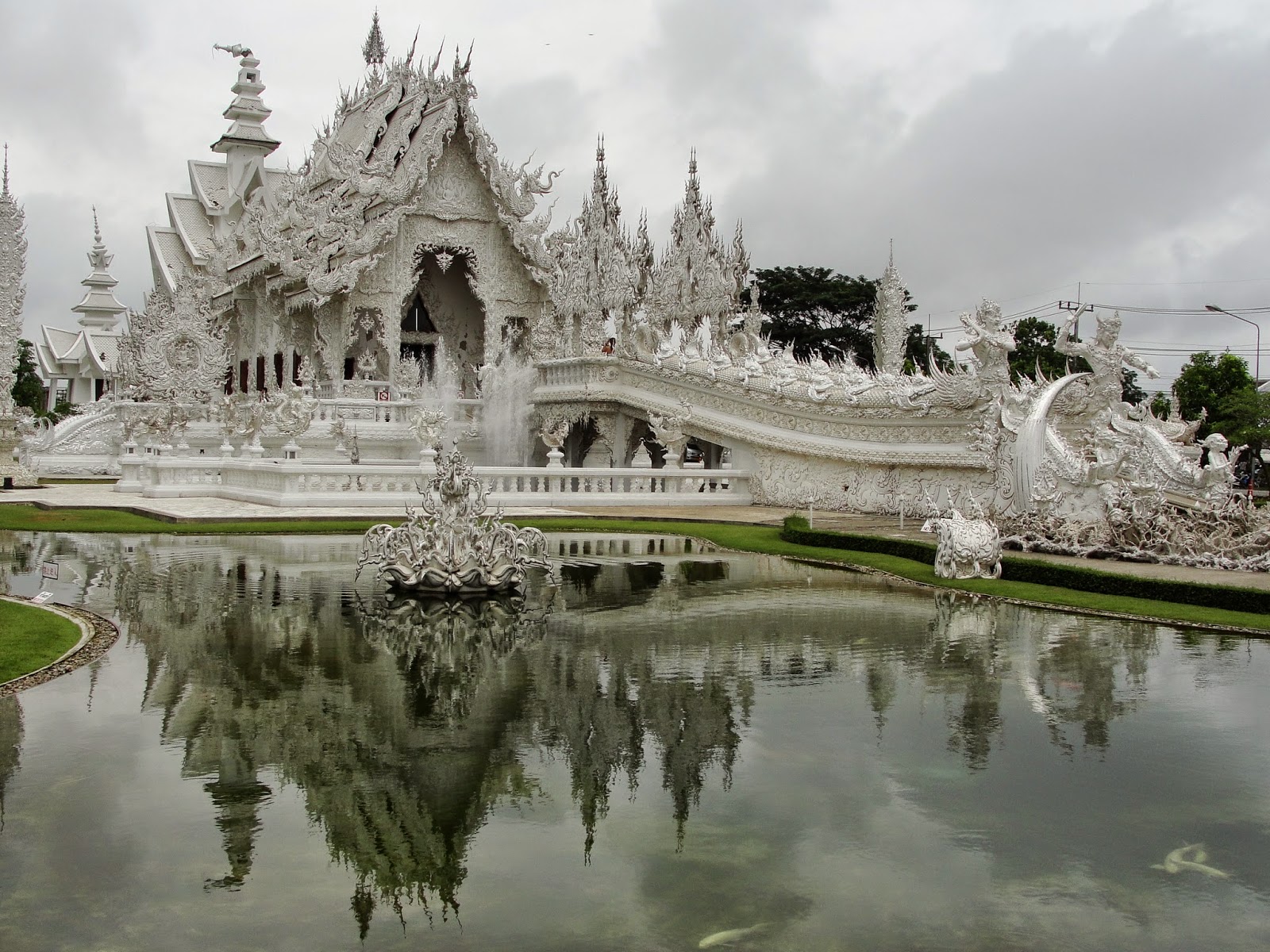 At the base of the footbridge are hellish hand statues reaching up toward "heaven", and ghoulish faces apparently screaming in agony. 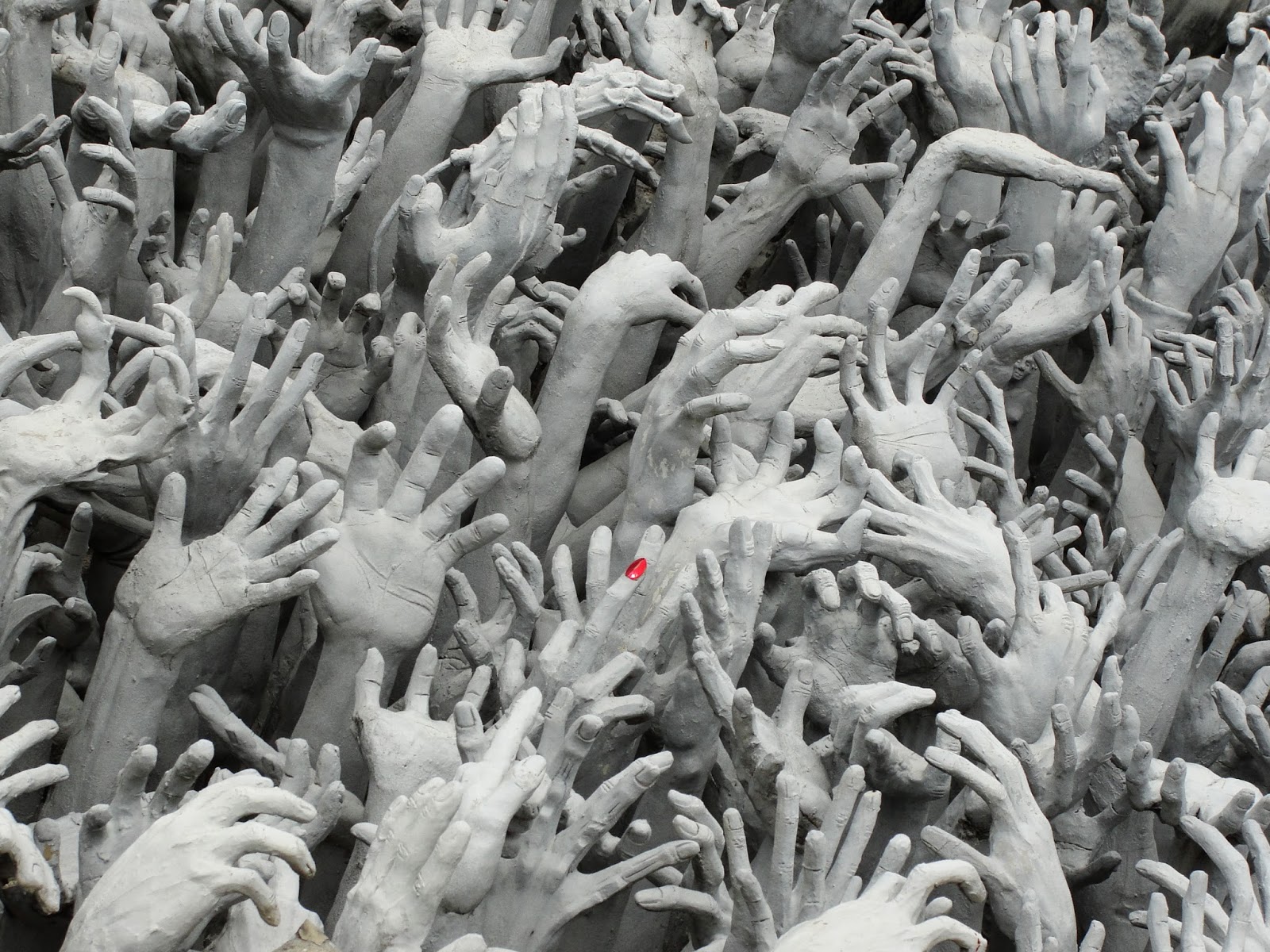 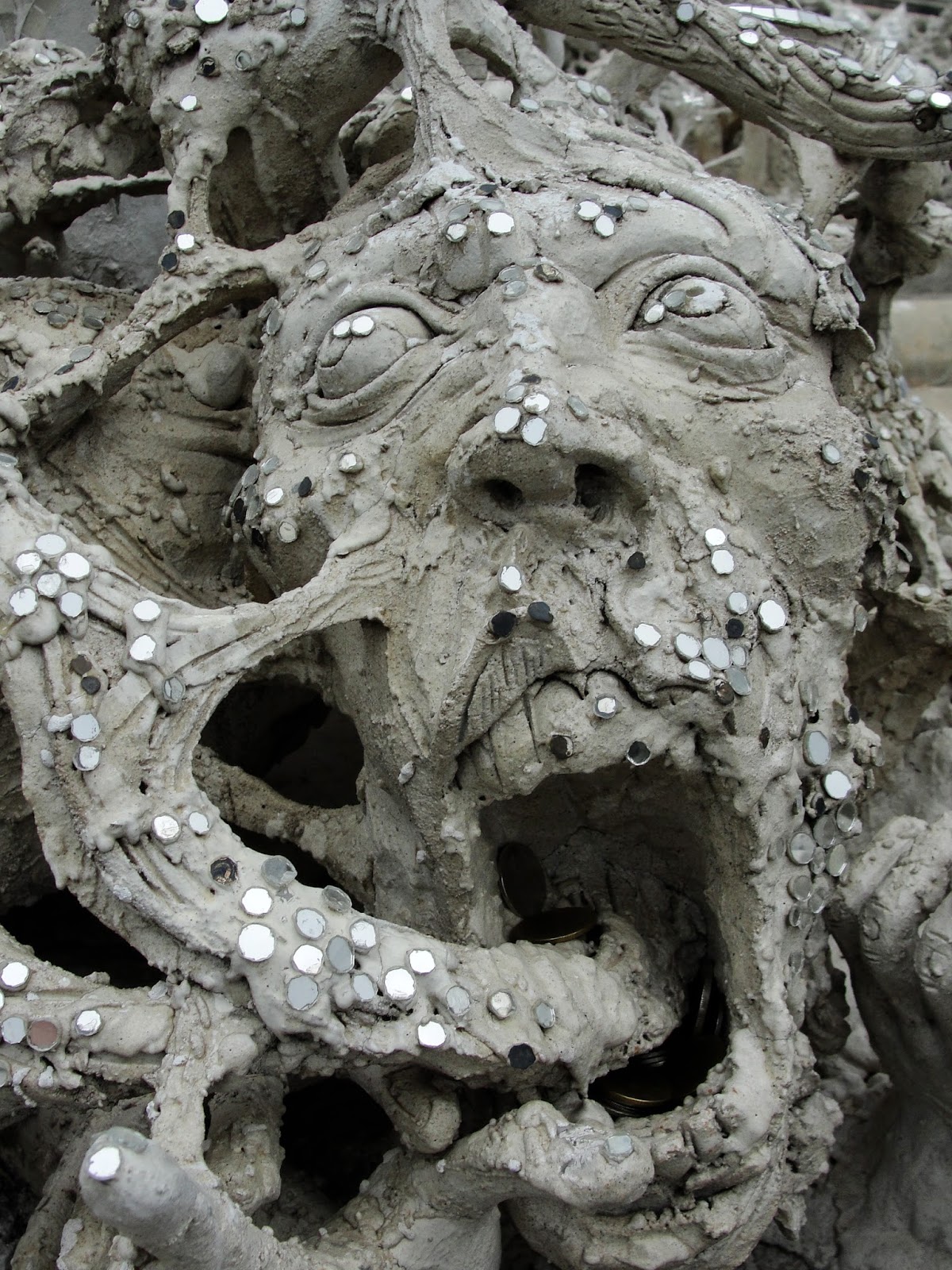 The May 2014 earthquake caused significant damage but the artist was able to reopen the site fairly quickly and design, building, and painting continue. We were able to tour most of the grounds except for a few temples like this one... 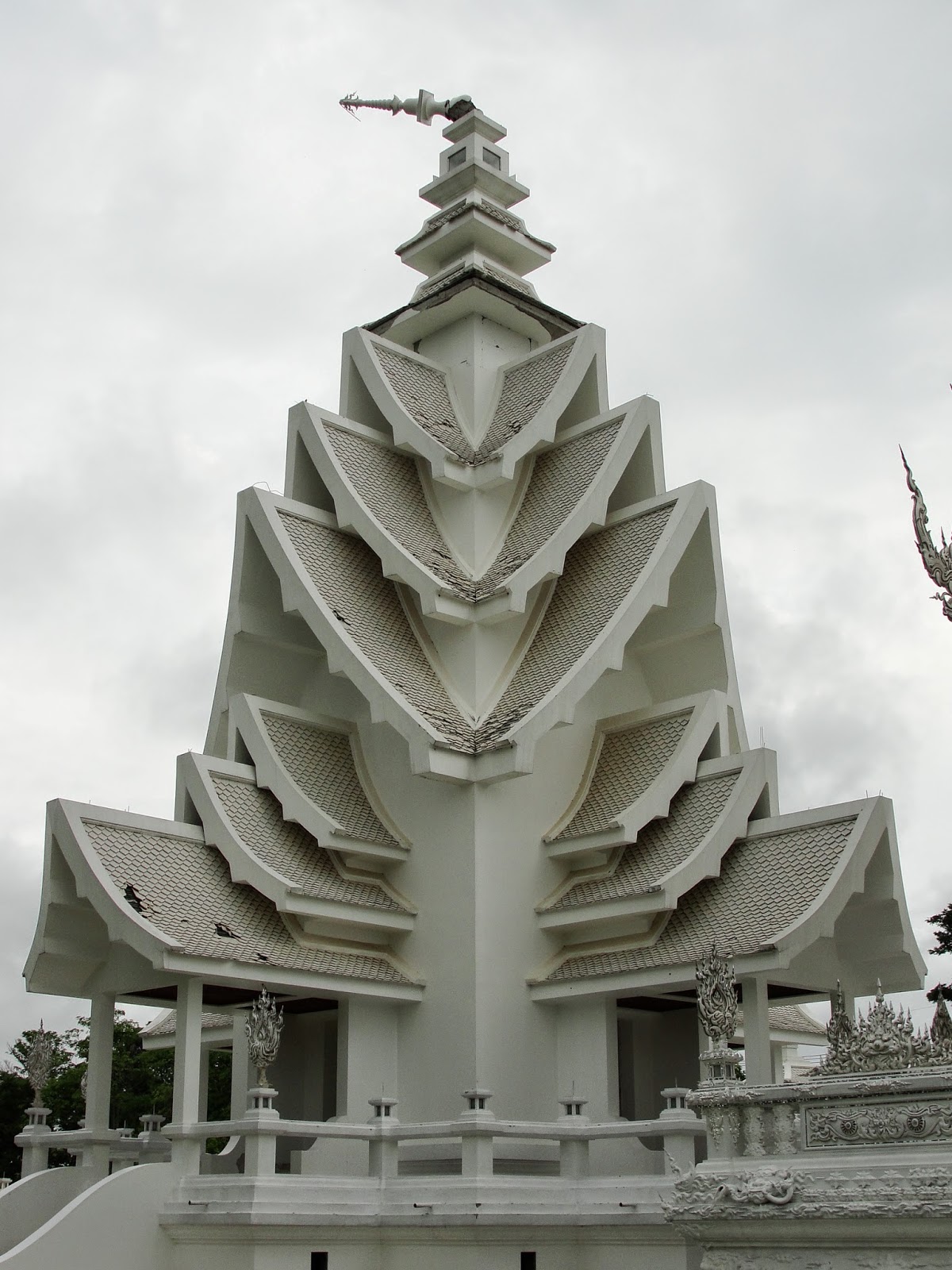 On the other side of town, after you walk through a dirt path from the highway, you find Baan Dam, aka the Black House, created by a student of the White Temple's creator. It was oddly reminiscent of the ossuary in Kutna Hora - only with animal skins instead of human bones. (And much, much bigger. And free.) 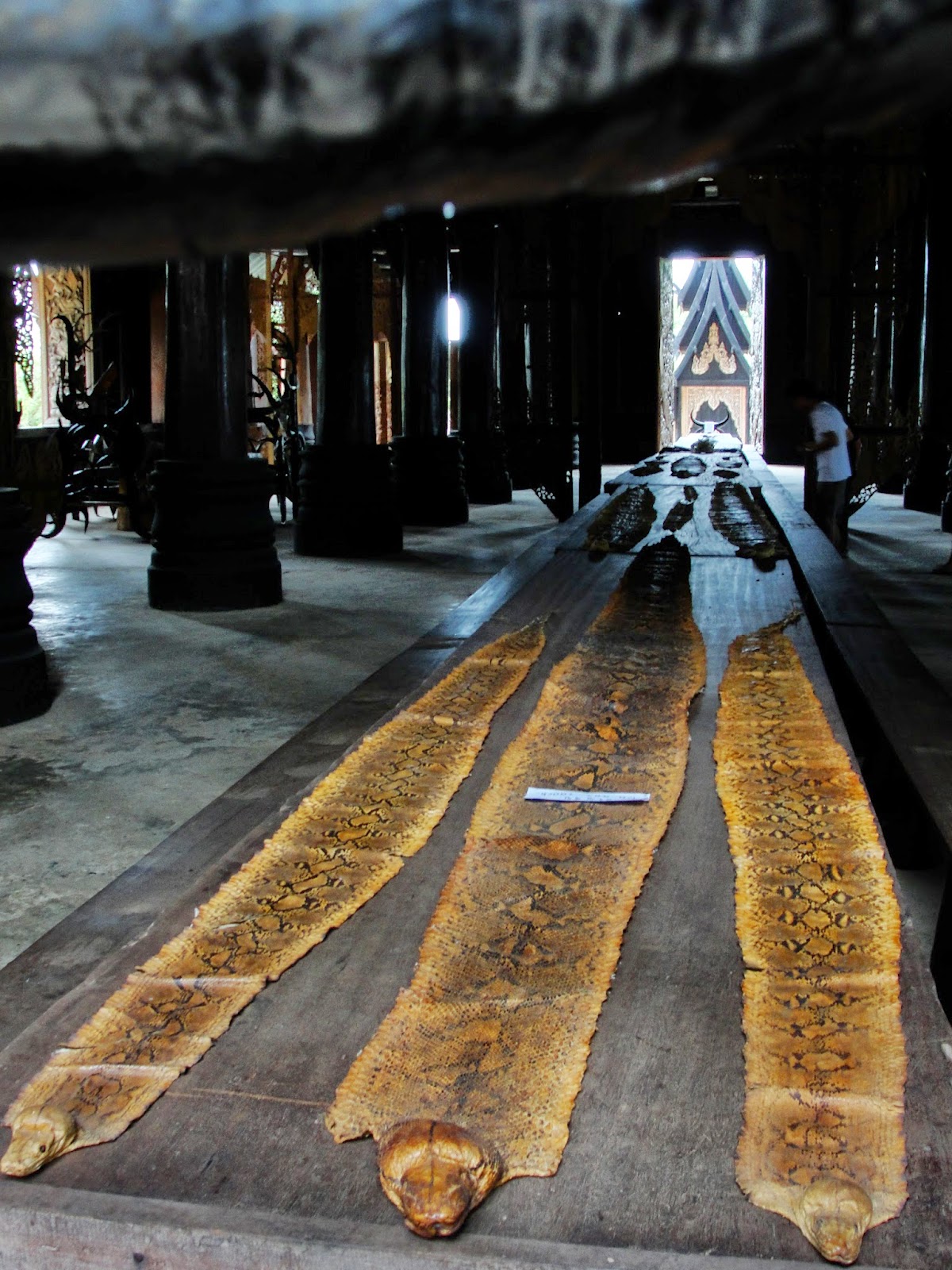 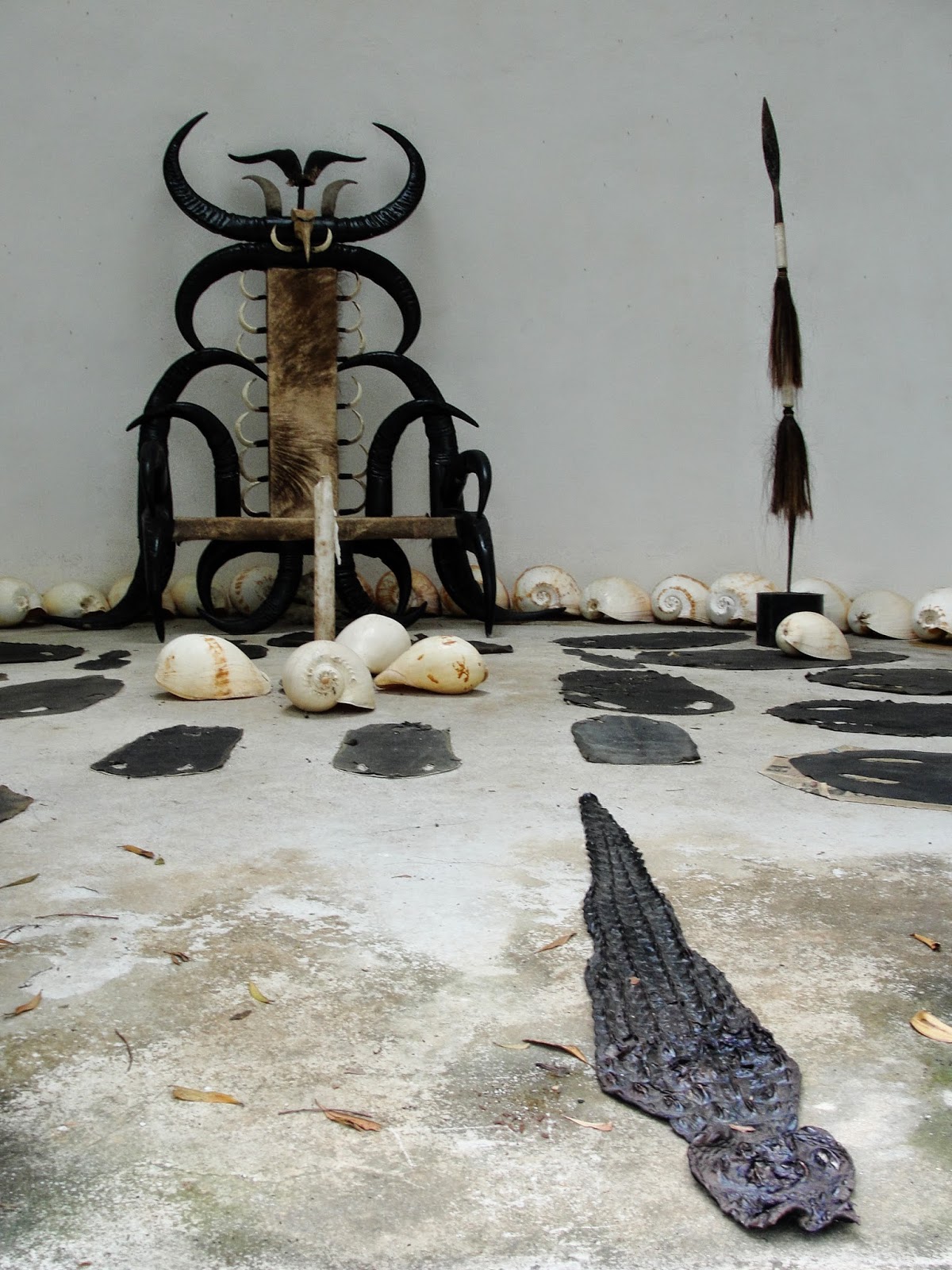 Allegedly, all the animals died of natural causes. Where he found an entire elephant skeleton, or crocodiles the size of small cars, or moose is beyond us though. We visited both the same day and the juxtaposition between the two was really interesting. (Both are easily accessed by local buses.)

One of the highlights of Chiang Rai was the Saturday night market. The food stalls were all so tempting; what we did try was delicious. And in the square, locals participate in a giant line-dance while a live band plays onstage. There seemed to be a different dance for each song, and everyone knew the steps. It was their weekly routine, not a show for tourists, which made it all the more fun to observe. (It reminded Jen of a similar communal dance night in Lima. Same same - but different.) 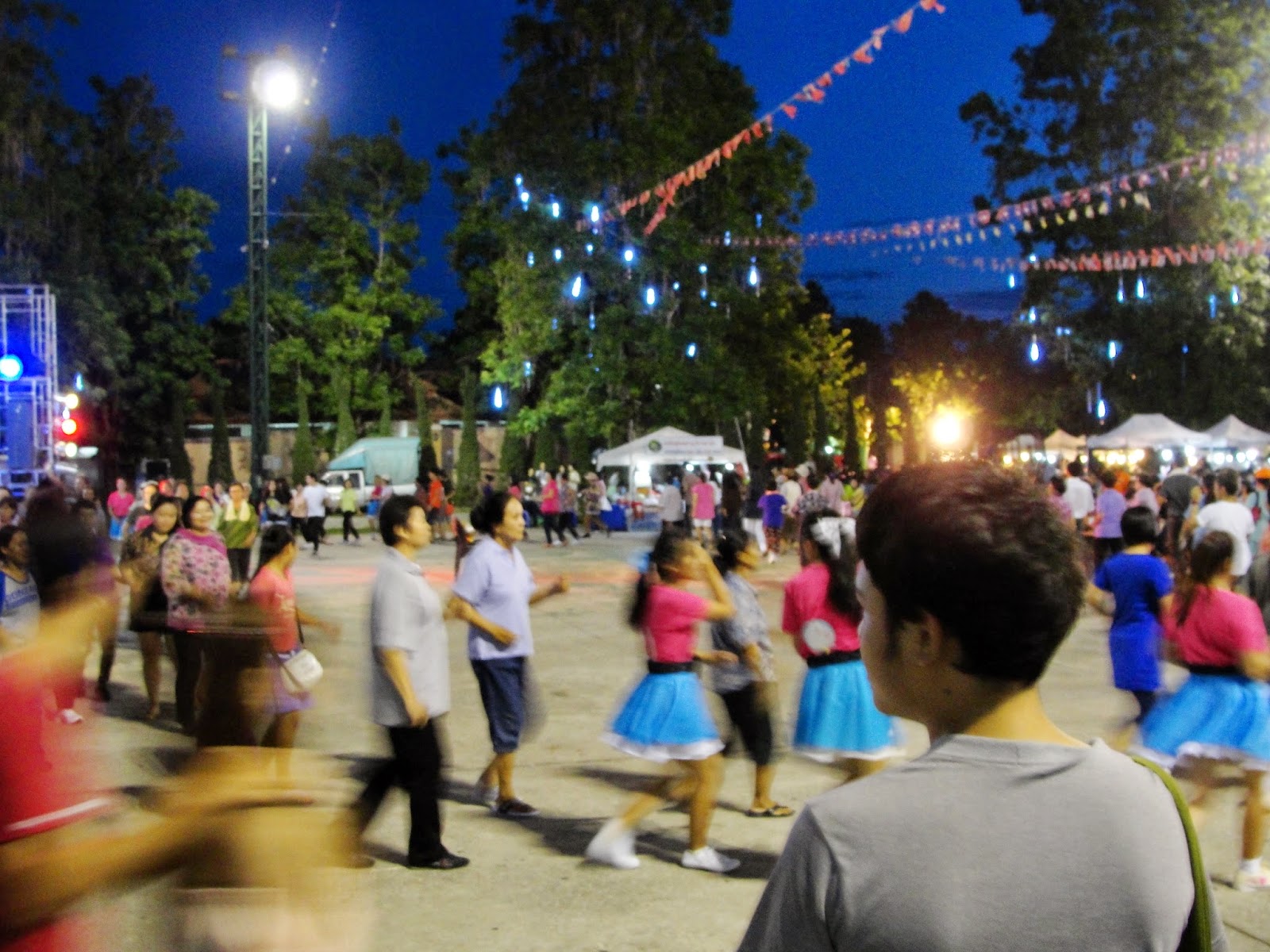 some women wore costumes -
wonder why?

One day we visited the Hilltribe Museum which pretty much confirmed our thoughts on the impacts of tourism in tribal communities. (It's bad.) There was also a whole wall of information on the morbidly fascinating history of opium trade and abuse, as well as displays and information about the various local tribes. A really great use of your tourist dollars - please visit if you're ever in Chiang Rai!

And let's not forget the wats...

First there was Wat Phra Kaew, the most sacred Buddhist temple in Thailand and home of the emerald Buddha. Lots of information about the history of the temple and the wandering emerald Buddha can be found by clicking the link above... It's a beautiful, serene place and the on-site museum featuring religious artifacts and historical information was especially well done. 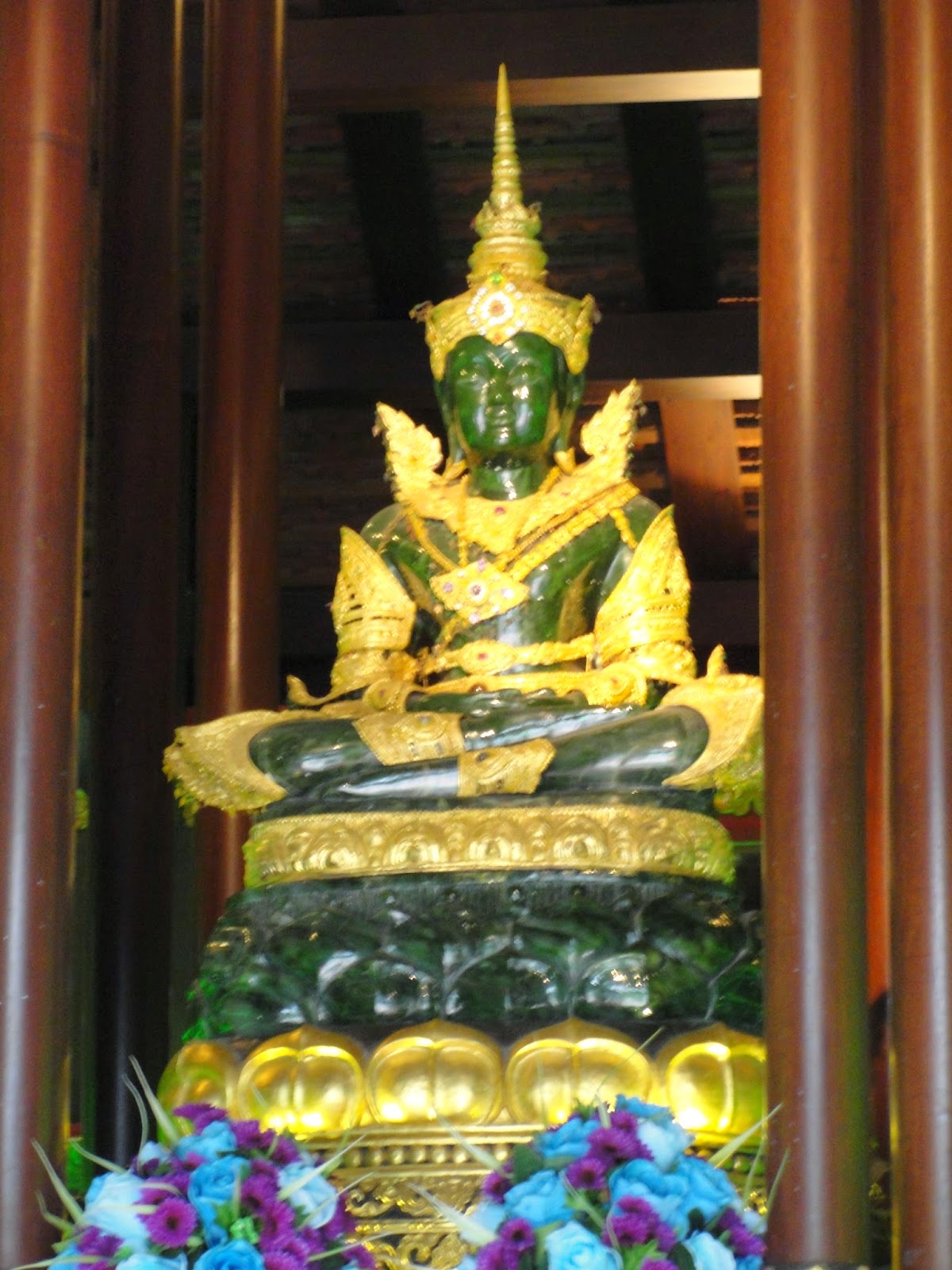 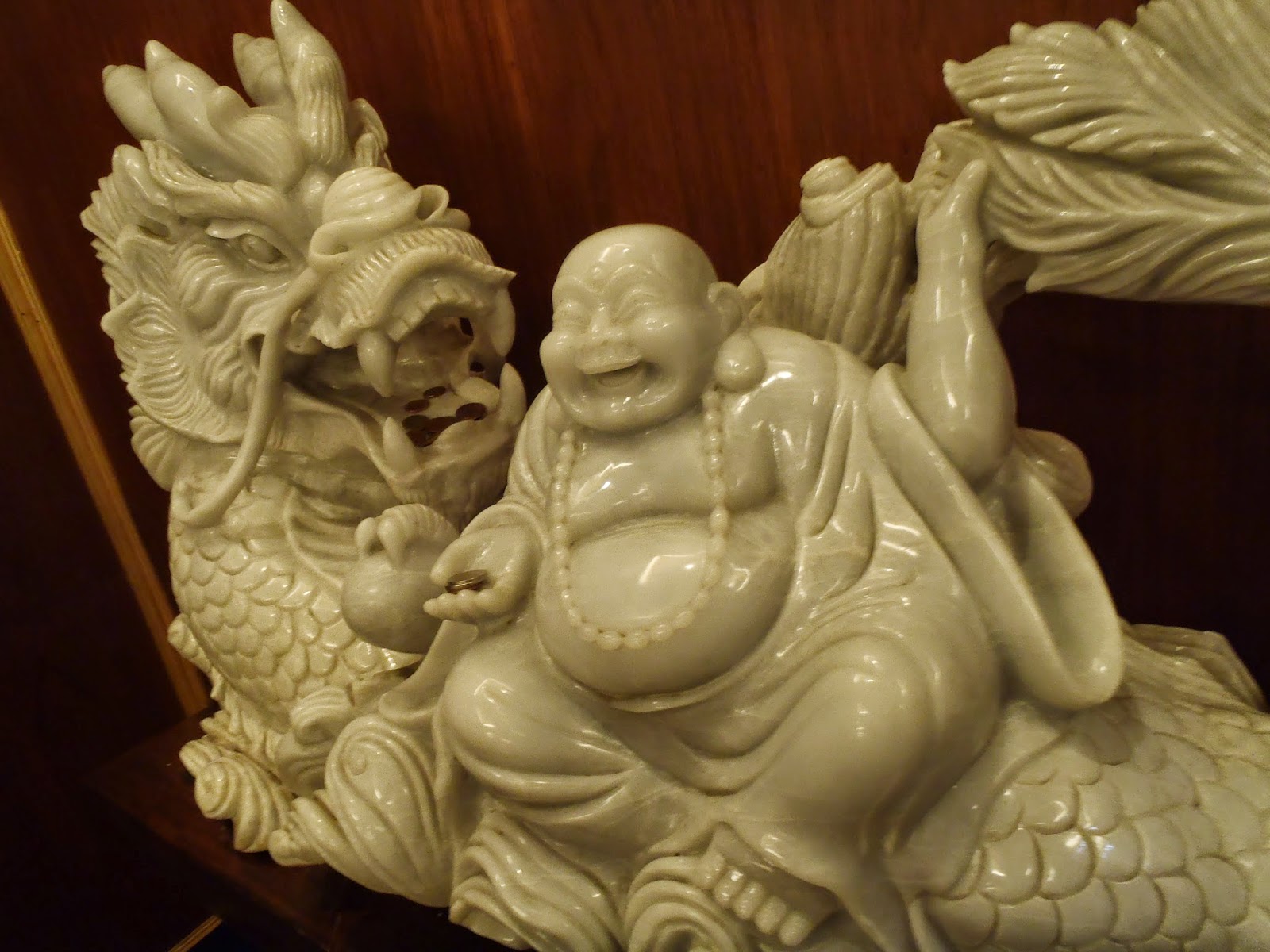 Next we visited Wat Ming Muang, a 700-year old traditional Lanna temple surrounded by elephant statues. For lack of a nicer word the design of it was quite busy, but still beautiful. 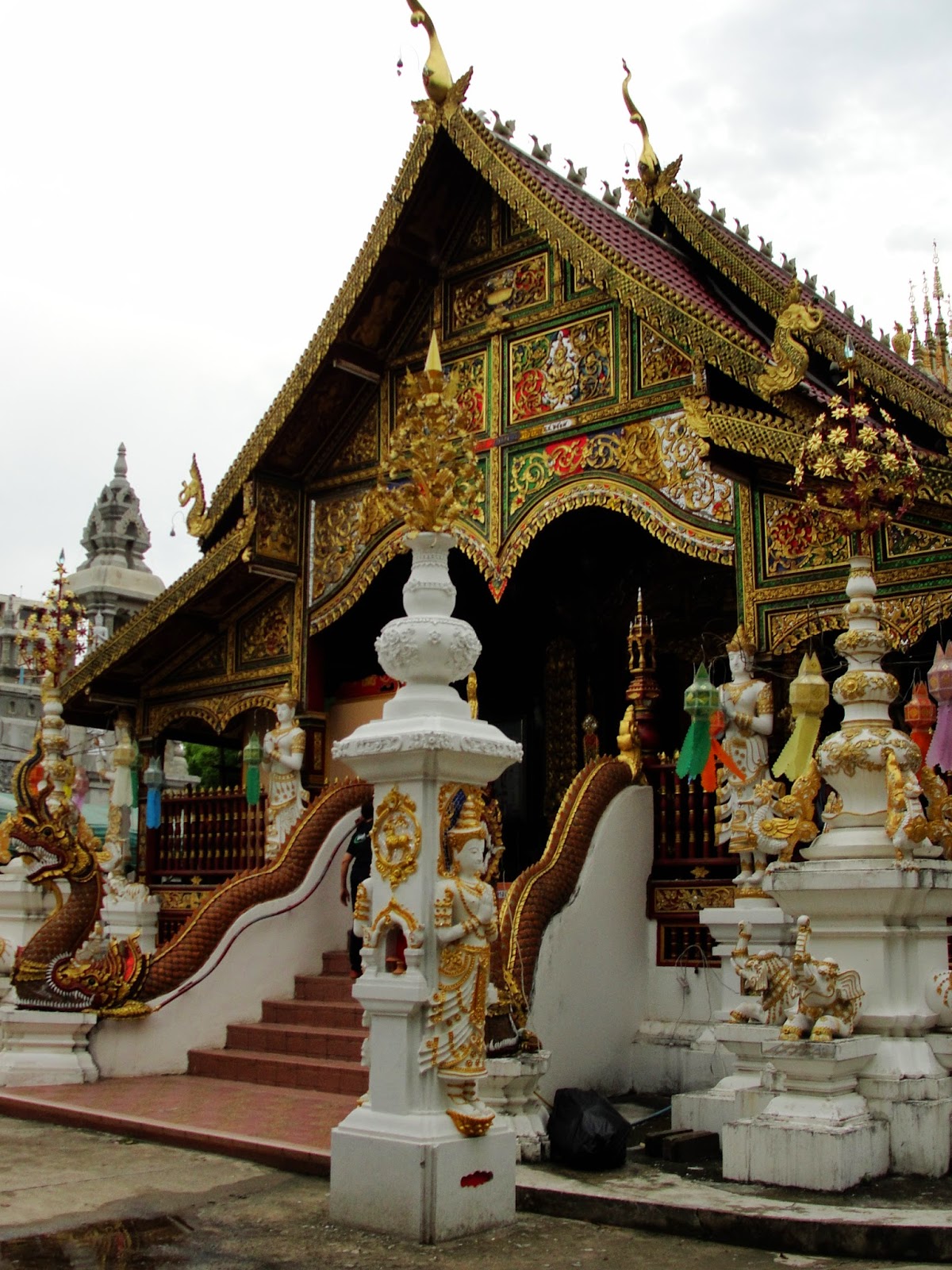 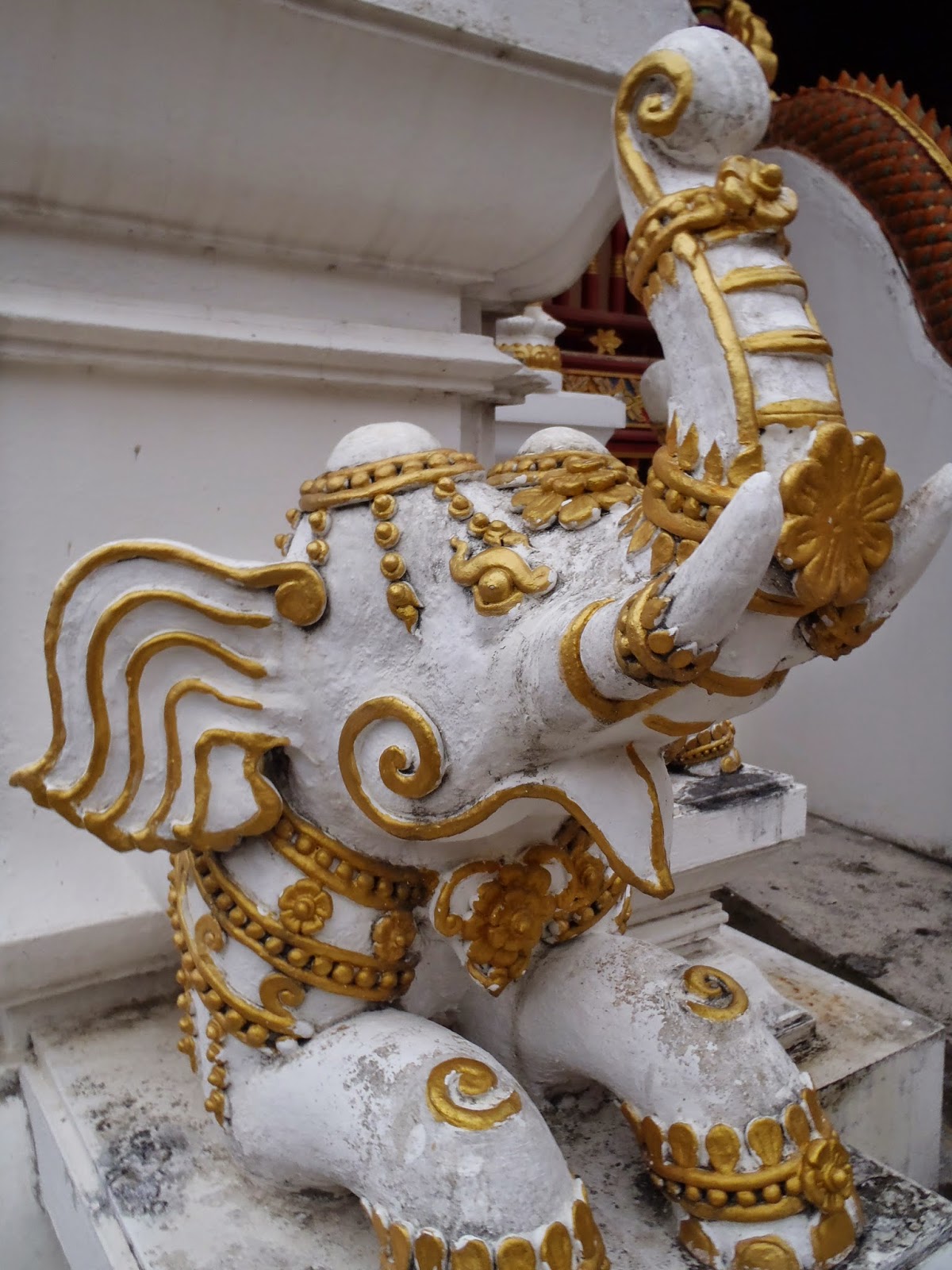 Then there was Wat Phra That Doi Chom Thong atop a hill near the River Kok. Nearby is the City Pillar, kind of the "power" of the city. These are found all over Thailand and are usually enclosed in shrines; however, the one in Chiang Rai is located in a large open space. 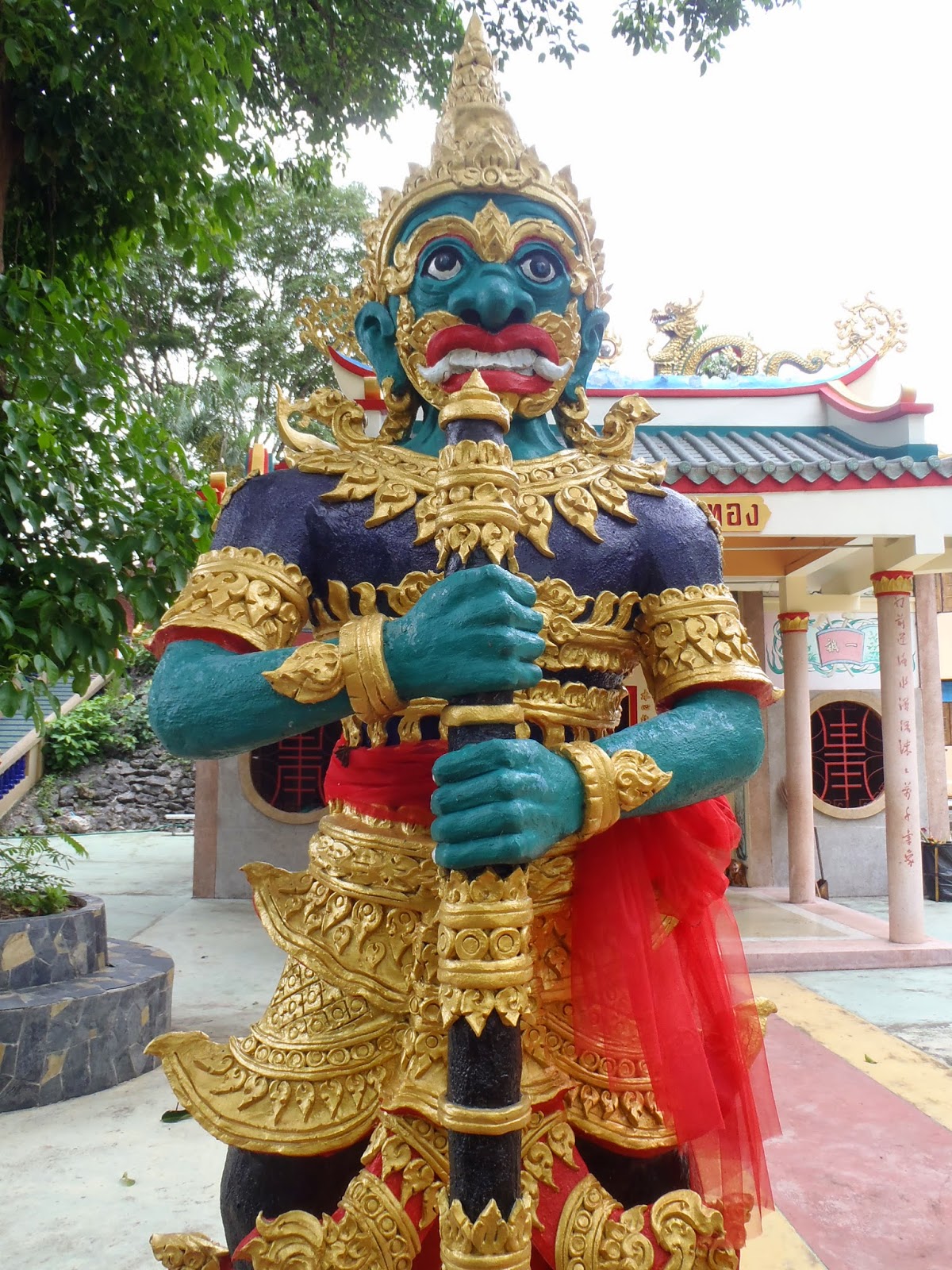 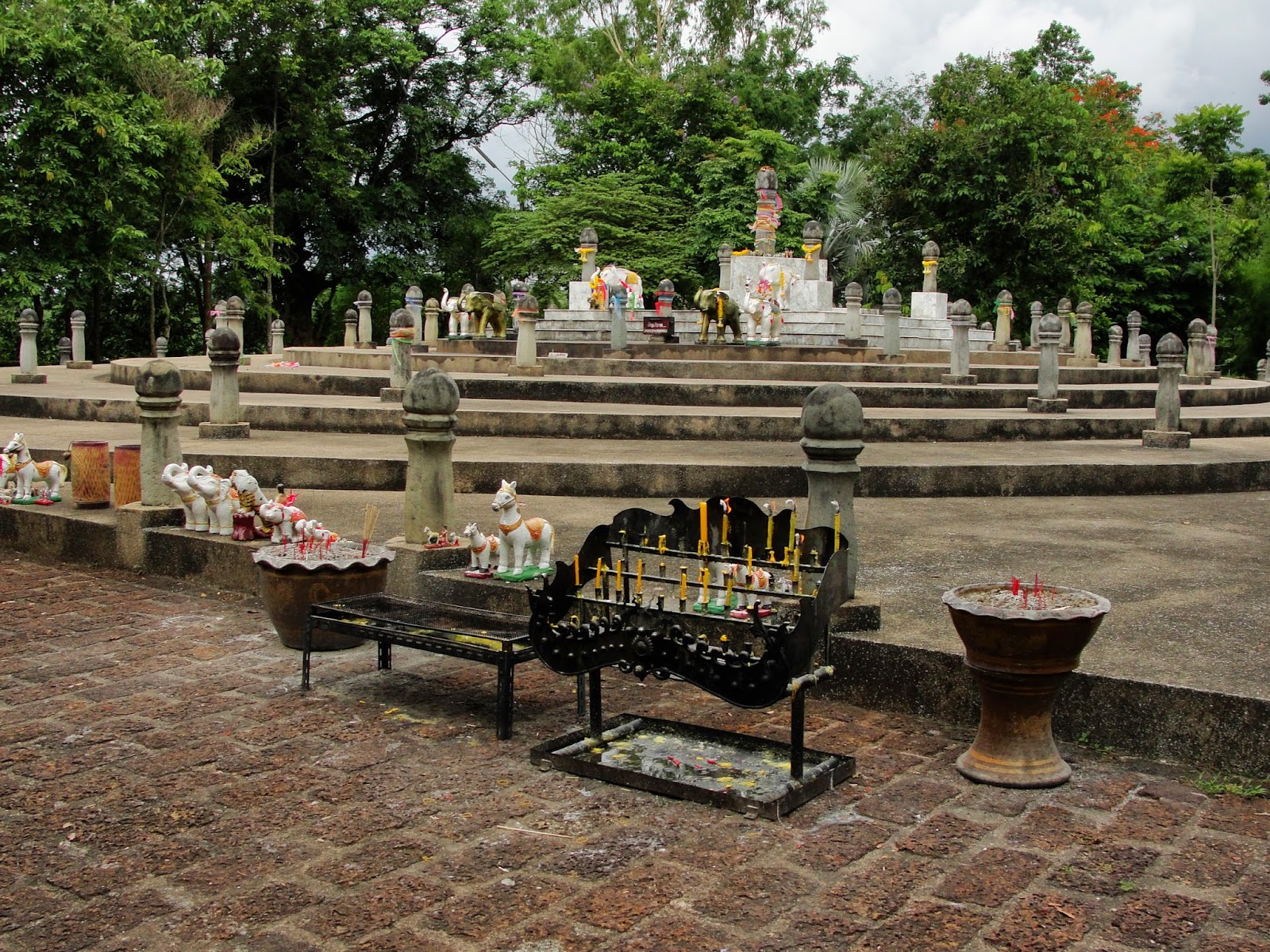 And finally we visited Jedyod Wat, which we had walked past about a billion times. This is one of the newer temples in town. The mural on the ceiling in the entryway of the temple represents the Thai astrological system. Very cool! 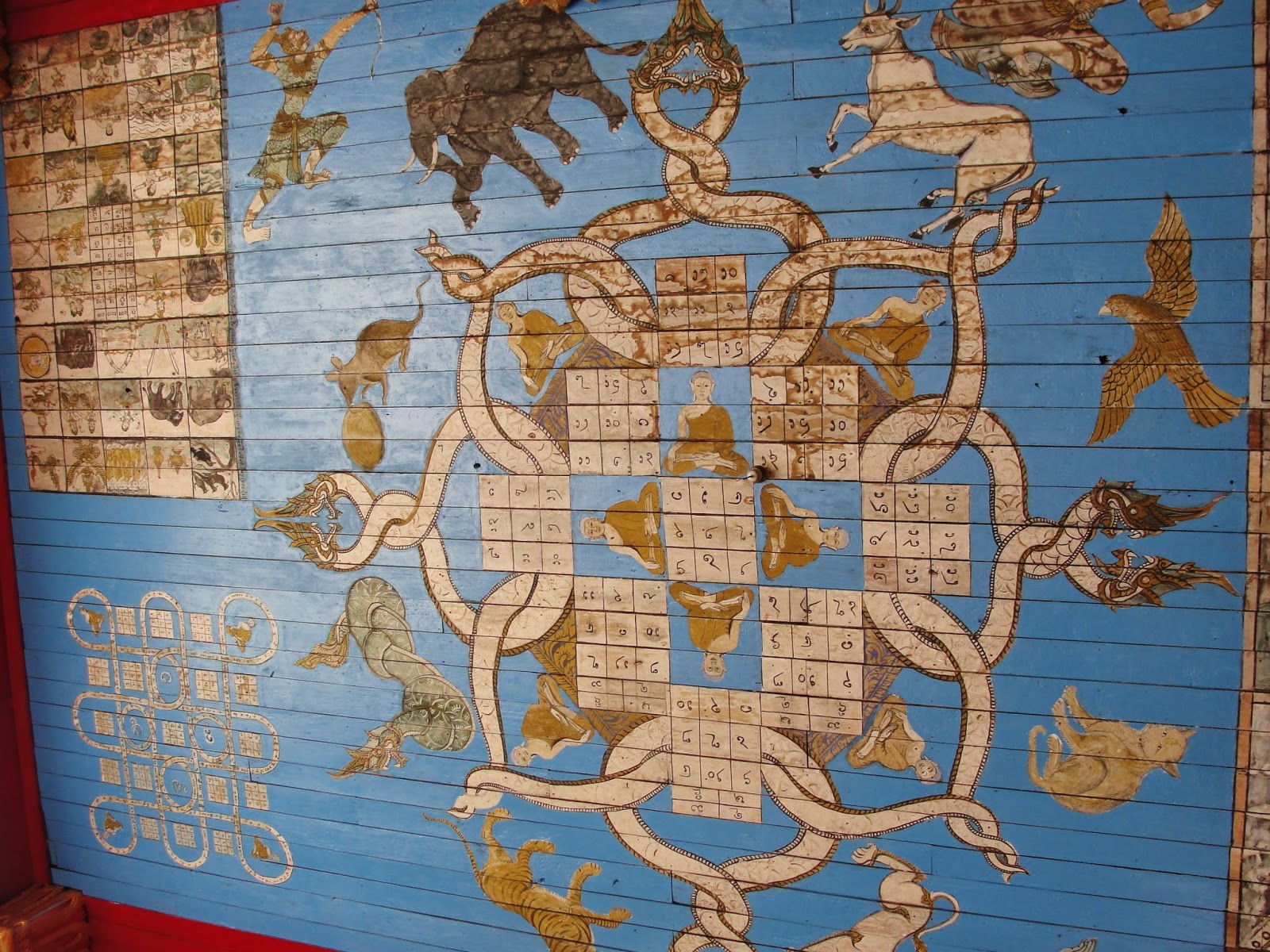 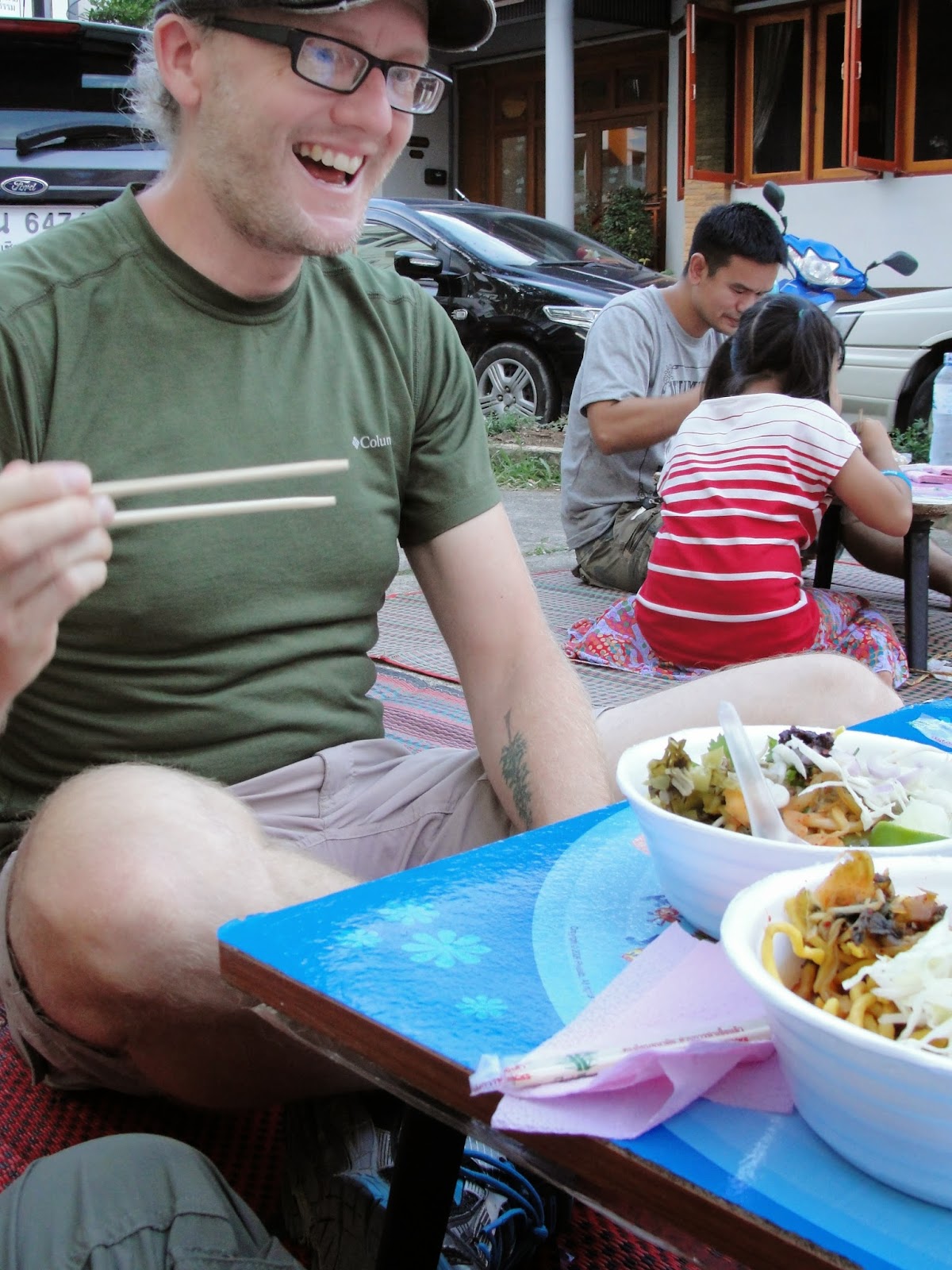 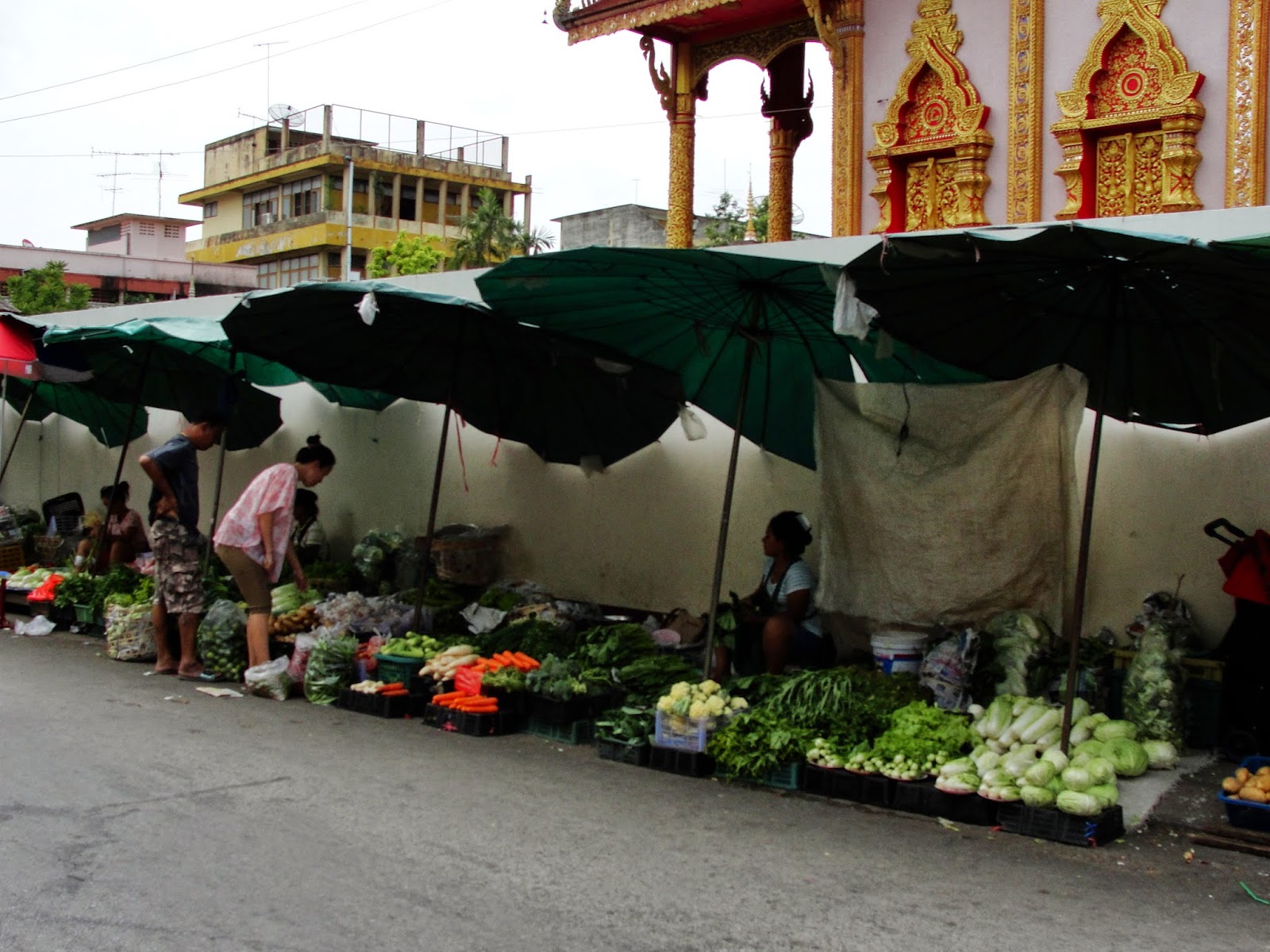 (maybe not from this market -
but from a nearby market,
we went through two kilos - not pictured) 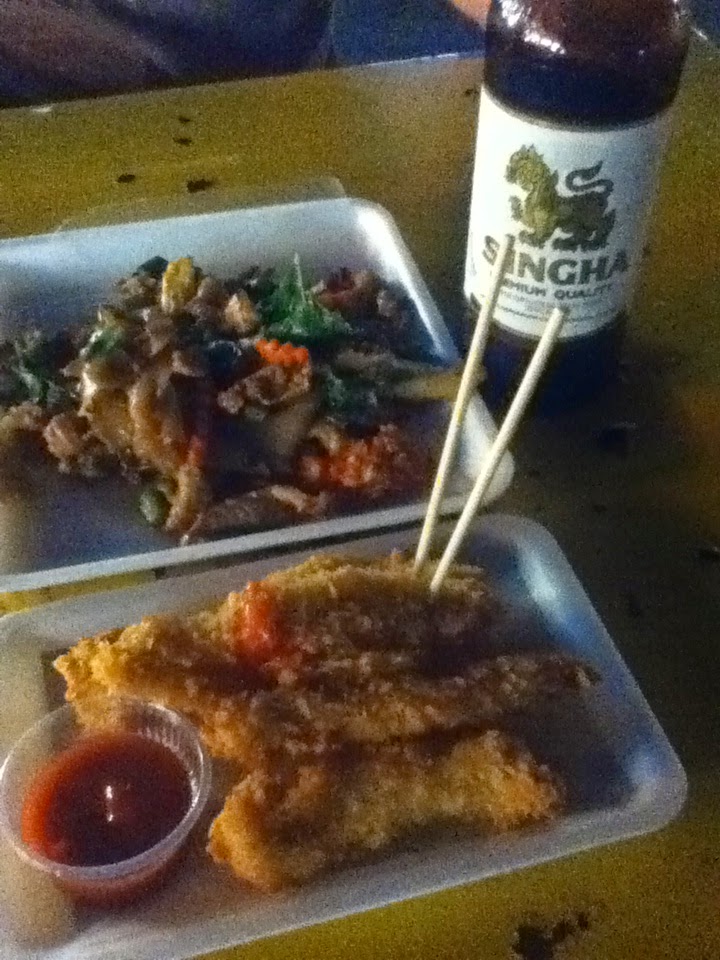 we gave it a try anyway...meh 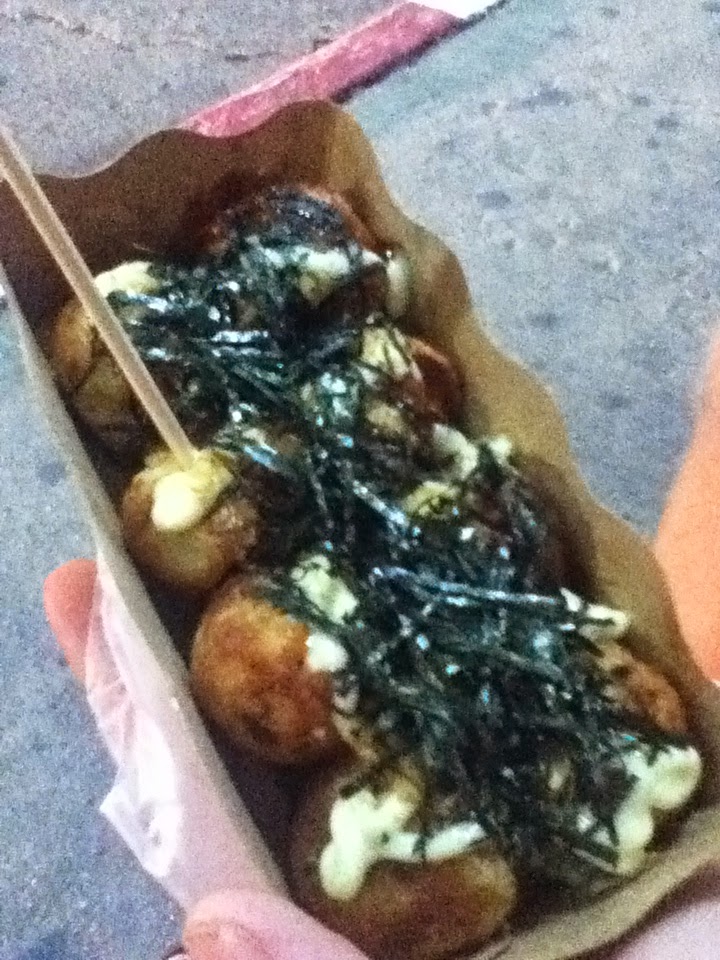 ham and cheese, crab, and... something 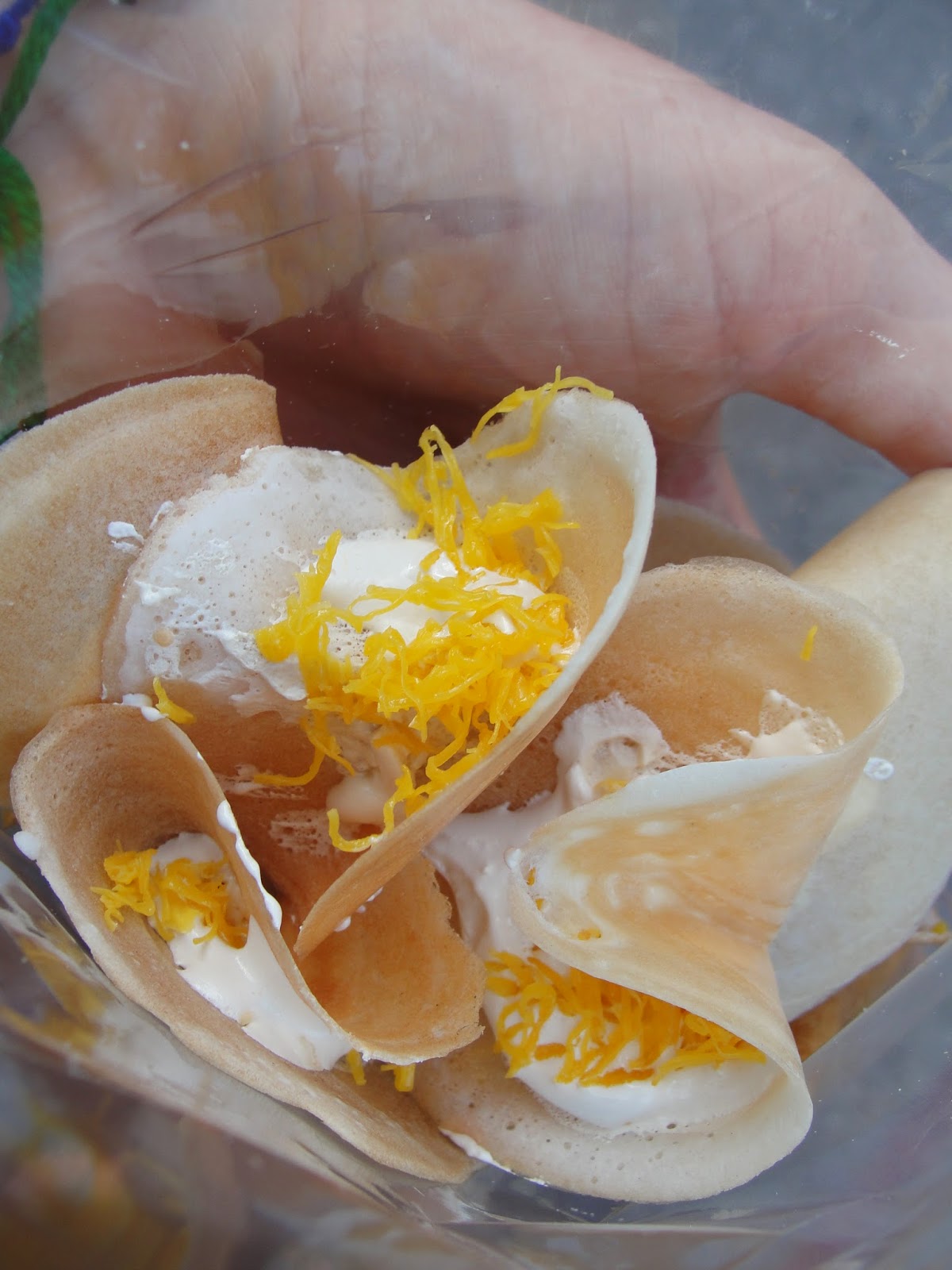 and the marshmallow waffle cone treats were good too
(though we do recommend eating these after dinner, not before) 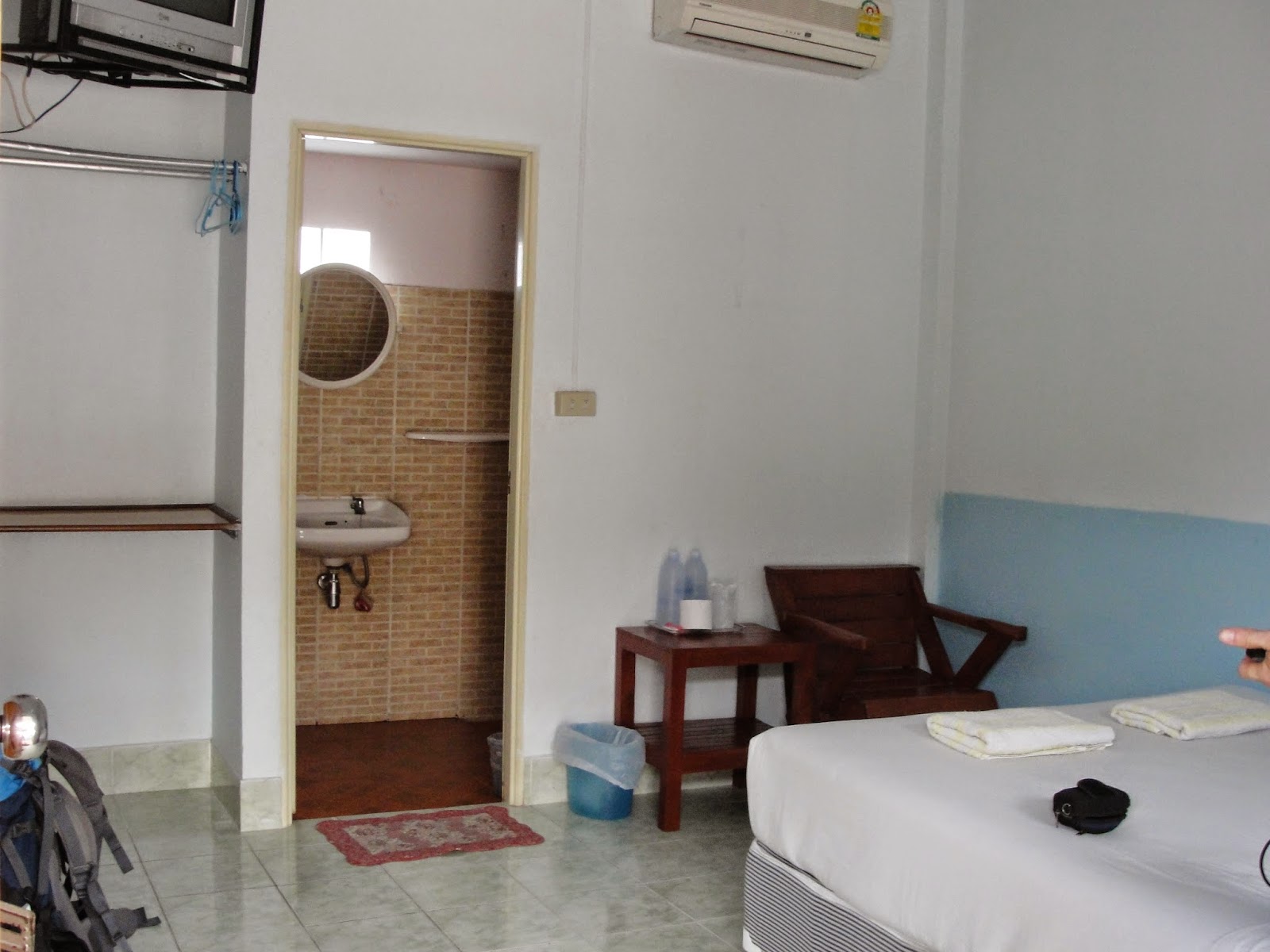 only complaint was the douchebag clientele -
but they can't help that

Chiang Rai was a nice intro to Thailand. Not too crazy, not too touristy, comfortable and accessible. It's a pleasant detour if you need to pop out of Lao to renew your visa, which is probably the reason most long-term travelers visit.

However! Not to stir up controversy, but there's a bit of a "creepy old white men" factor to the city that will probably be evident throughout Thailand. The neighborhood where we stayed was home base for at least a dozen older English-speaking men traveling solo who frequented the "massage" parlors and drank every night at the bars. (Some also started drinking every morning at 9am.) I'm sure it had to do with our neighborhood but we couldn't shake the creepy factor. We're sure that 999 out of every 1000 older English-speaking men visiting Chiang Rai solo are not creepy... at least, we hope not.

Next up is Chiang Mai, where we hope to spend a week sightseeing, staying in neighborhoods devoid of aforementioned creeps, and catching up on planning and sleep. We still have no idea what we want to do in this country, and experience has proven that two months will be gone before we know it...
Posted by Jen
Email ThisBlogThis!Share to TwitterShare to FacebookShare to Pinterest
Labels: asia, thailand