Our fourth border crossing by foot was fairly uneventful. (Fellow Hue-Savannakhet travelers, see the first comment for how we did it.) 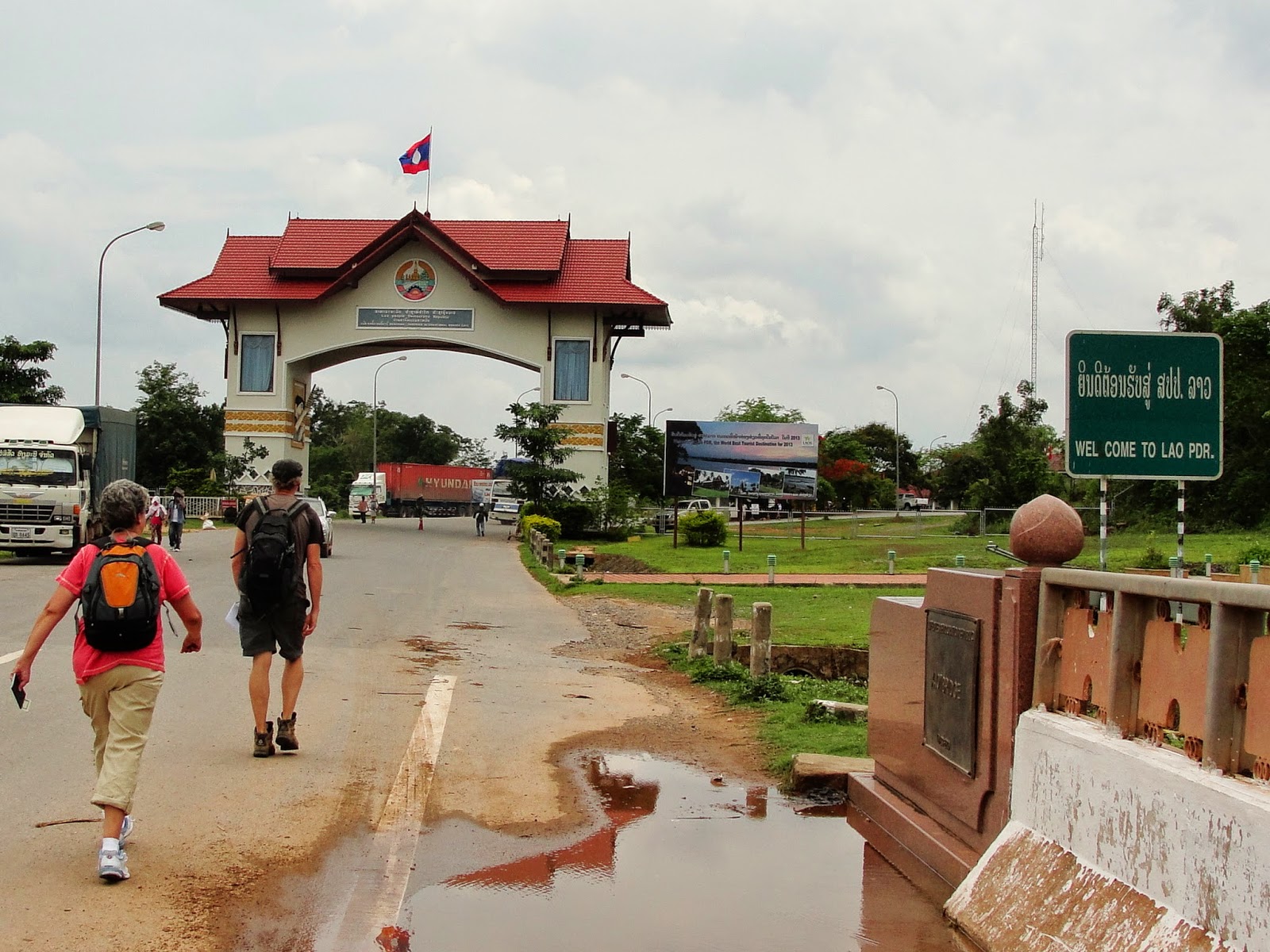 With most border crossings (by foot, bus, ferry, whatever) there hasn't really been a noticeable difference from one country to the next. The one exception was Spain to Morocco but for that we crossed a large body of water and entered a whole new continent, so the change was gradual and understandable.

The change from Vietnam to Lao was striking, though. Fairly well-constructed concrete buildings became small, wooden stilt houses just across the border. Green fields became brown and barren. Well-maintained major roads were suddenly full of bumps and potholes. We were definitely not in Kansas anymore. 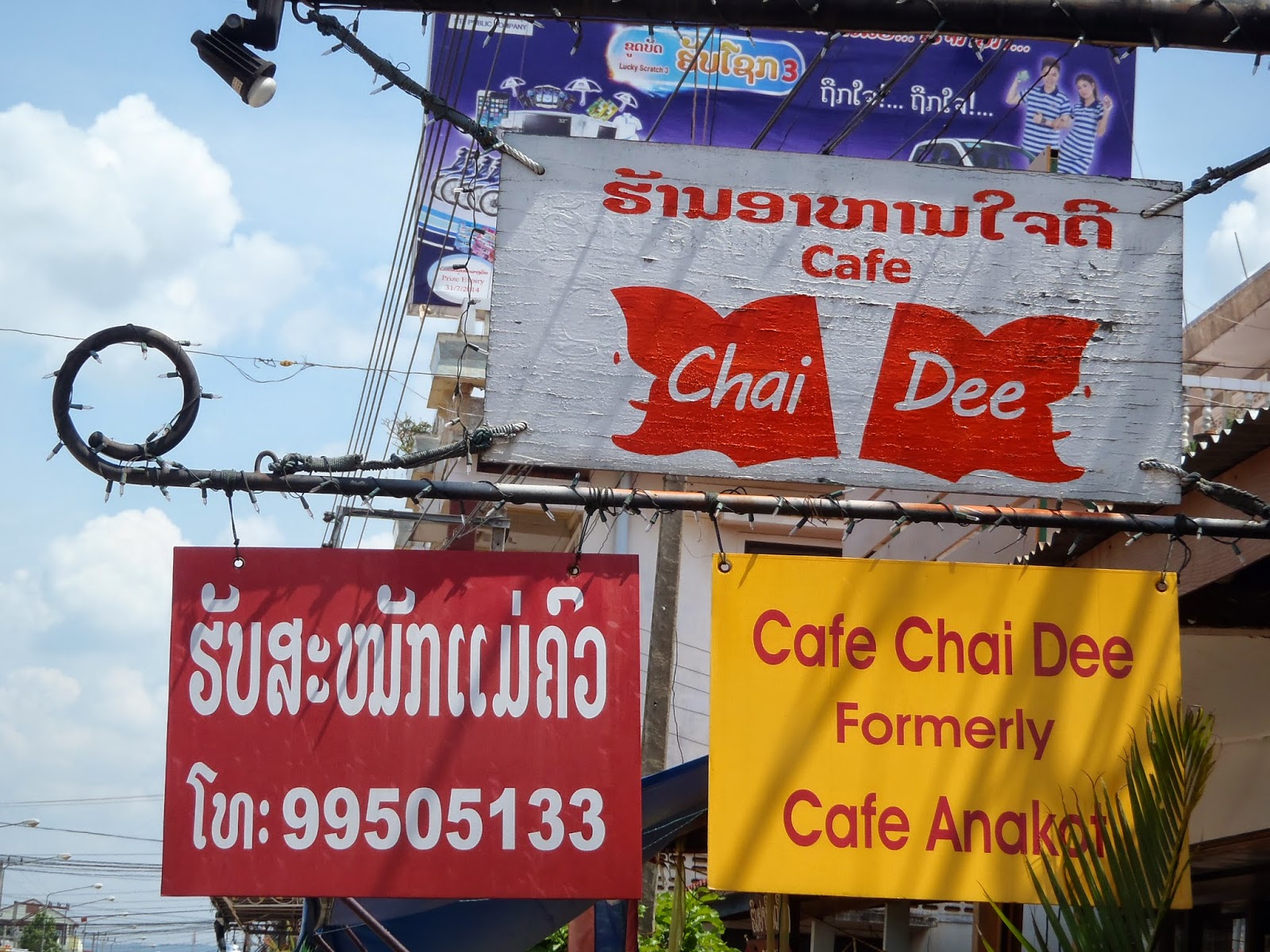 Folks in town were polite but not exactly friendly. We were approached by beggars for the first time since Morocco. And the unbearable heat and blazing sun didn't help our moods much. (Okay, it didn't help my mood. Whatever.)

We didn't wander far around the hot, dusty town. Our hotel was pretty far outside the main area and there didn't seem to be much to see, and definitely not much we could understand or appreciate without speaking or reading the language. With the help of a few maps we still managed to take in a few sights though... 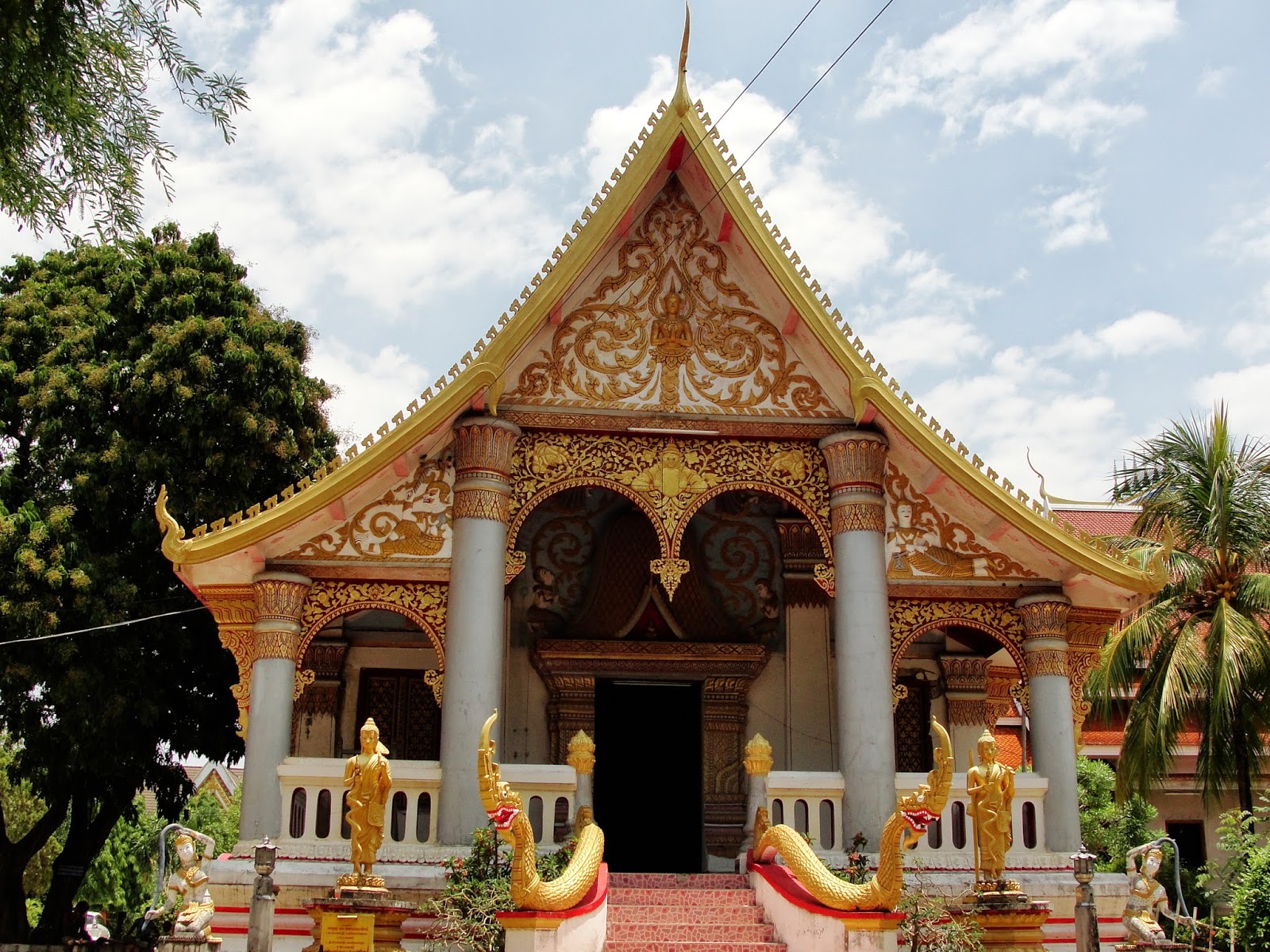 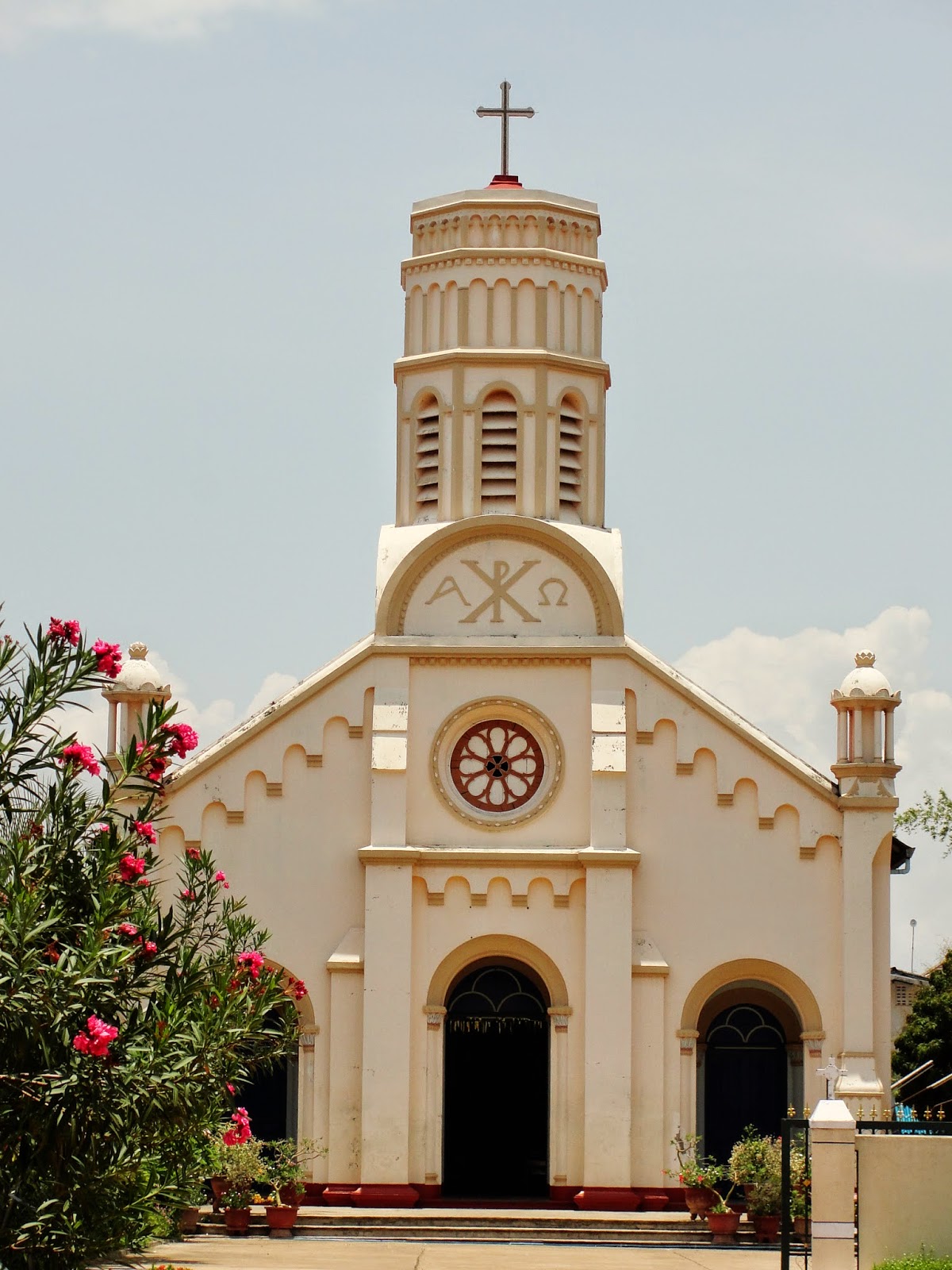 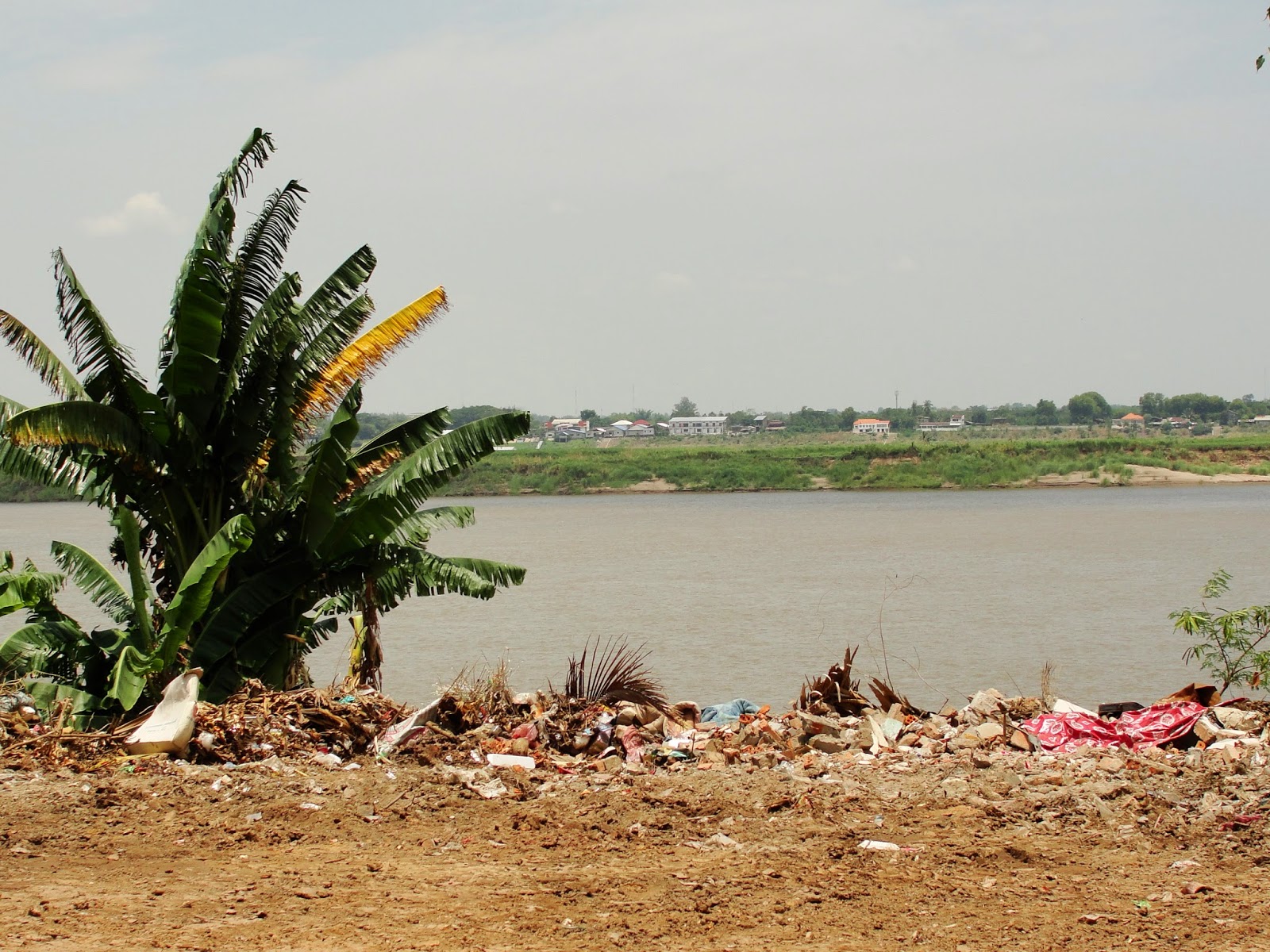 the Mekong
(I can see Thailand!
and lots of trash!)

Savannakhet is near several important archaeological sites and out of curiosity we walked by the dinosaur museum but decided not to go in. Reading up on it later, this was probably a good decision (in addition to that stellar review, another pair recommended having a few beers before venturing over to make it more enjoyable). They do love their dinosaurs though. 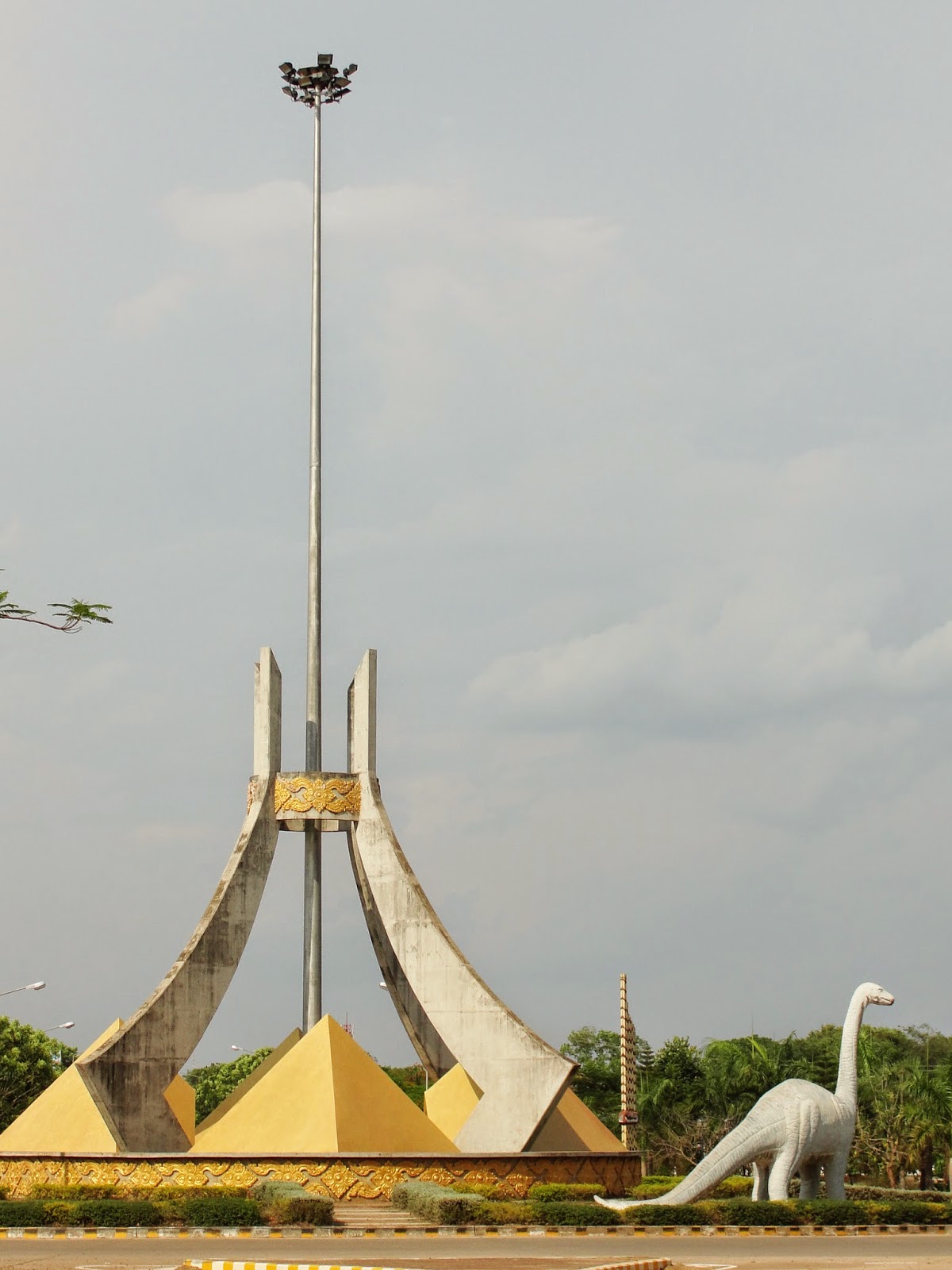 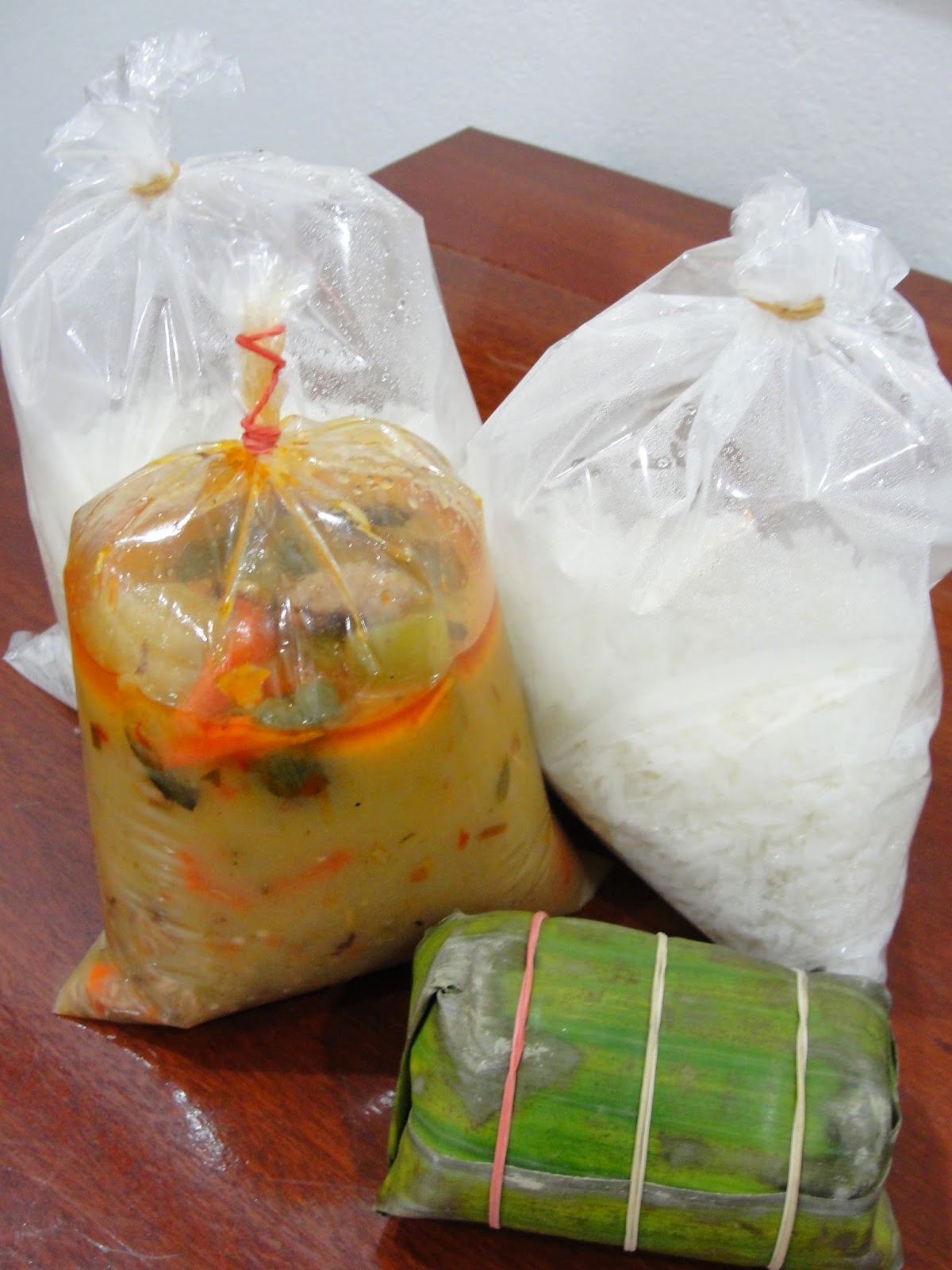 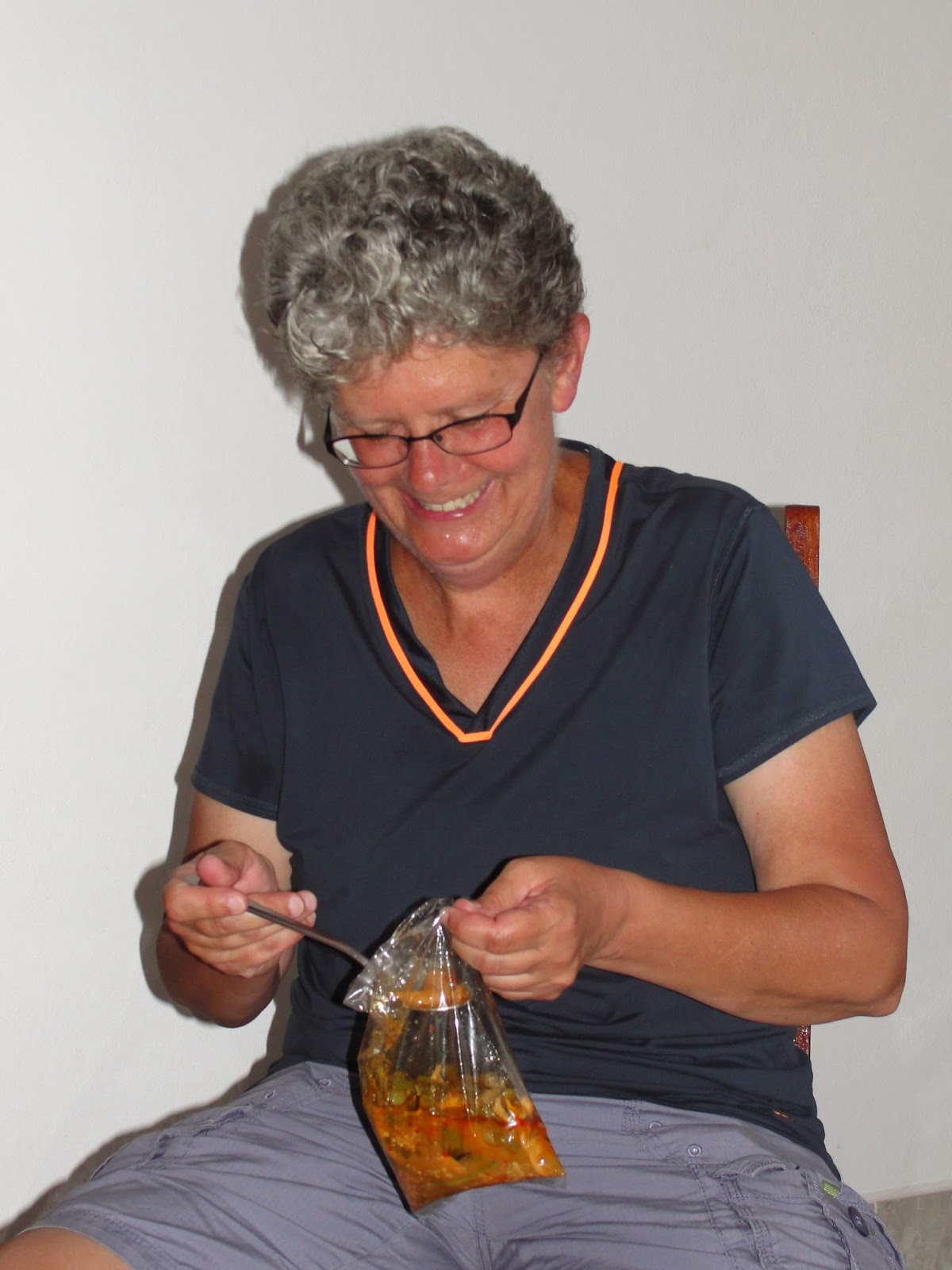 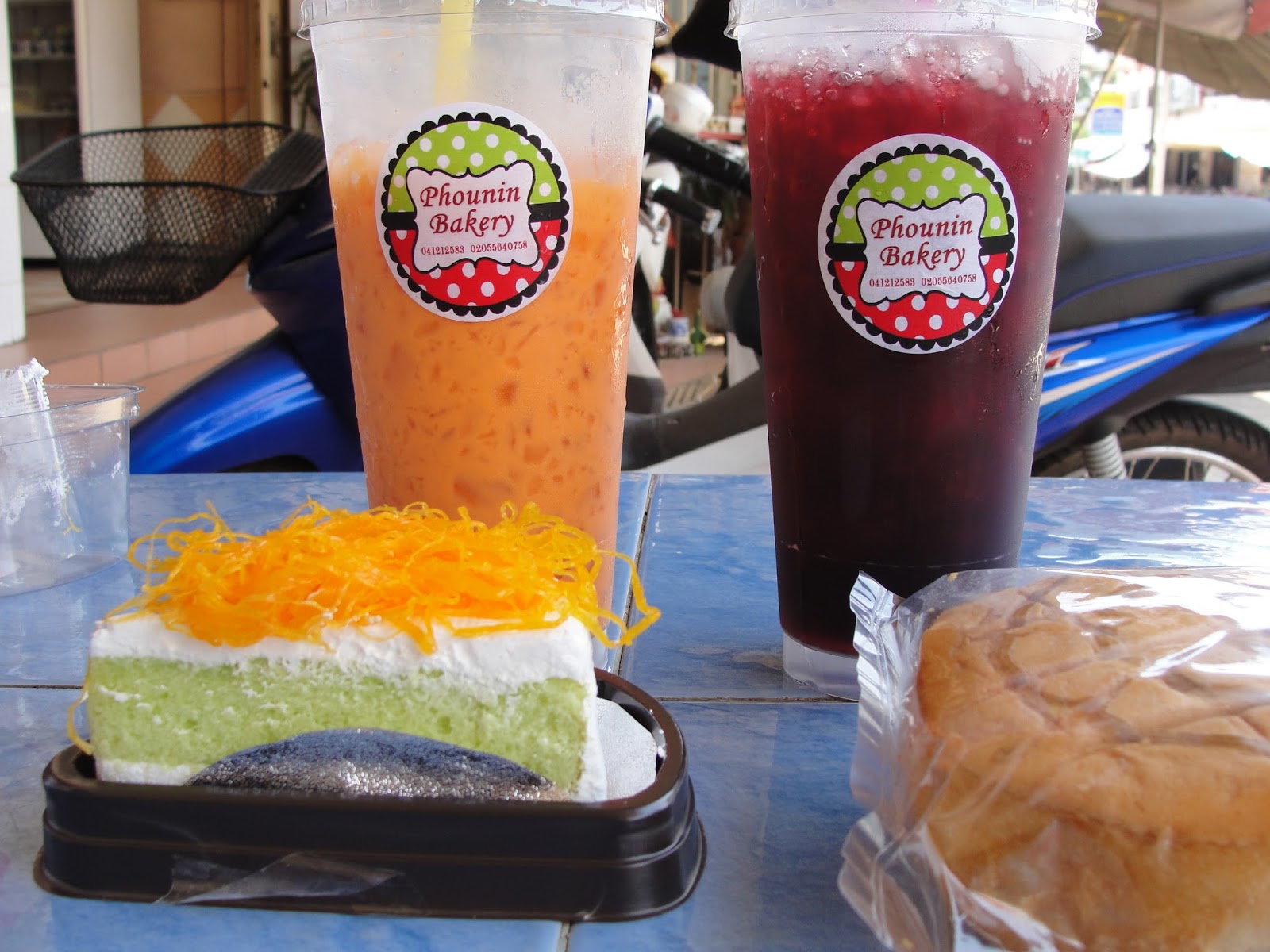 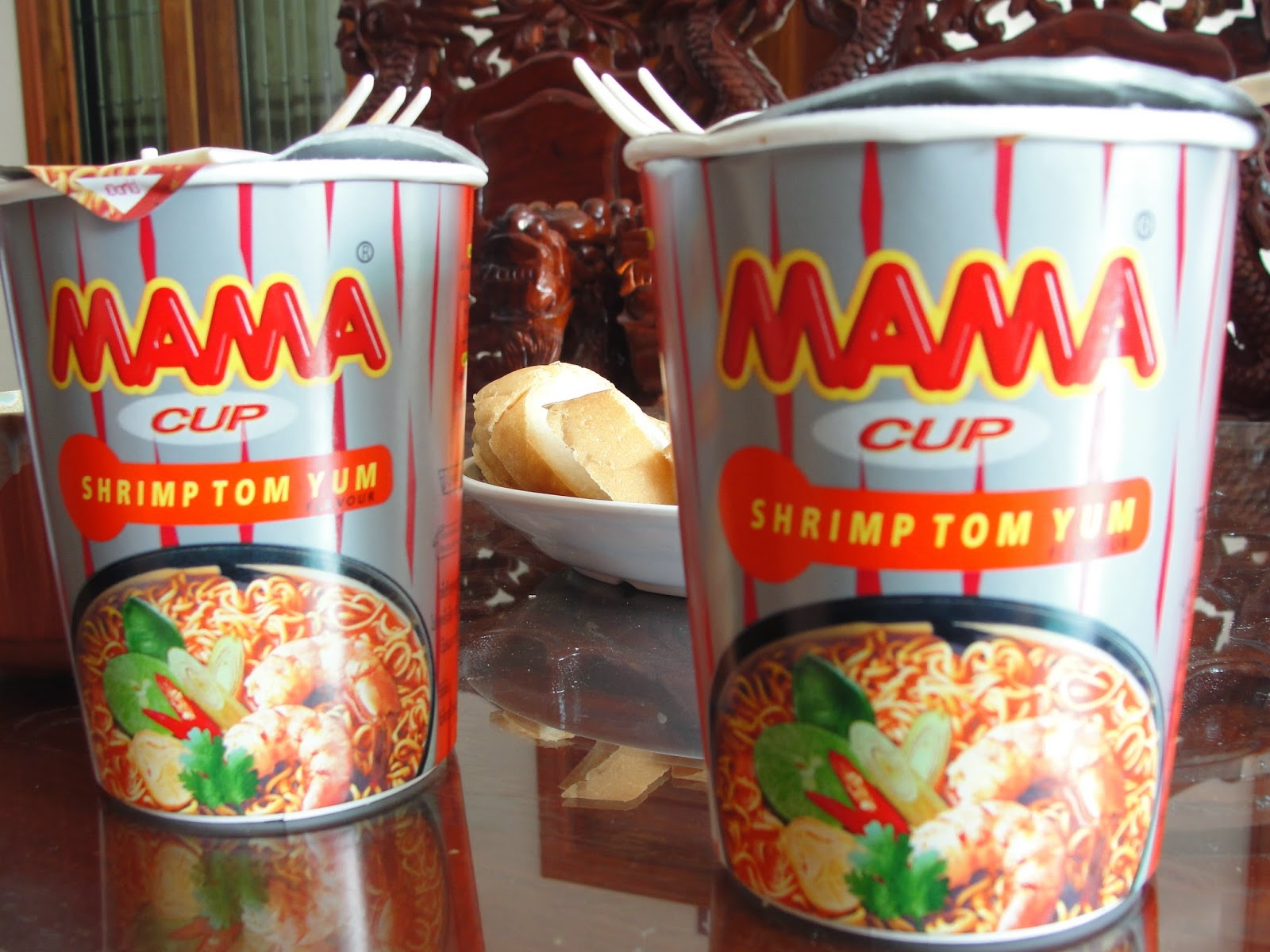 not recommended
unless it's your only option within 7km 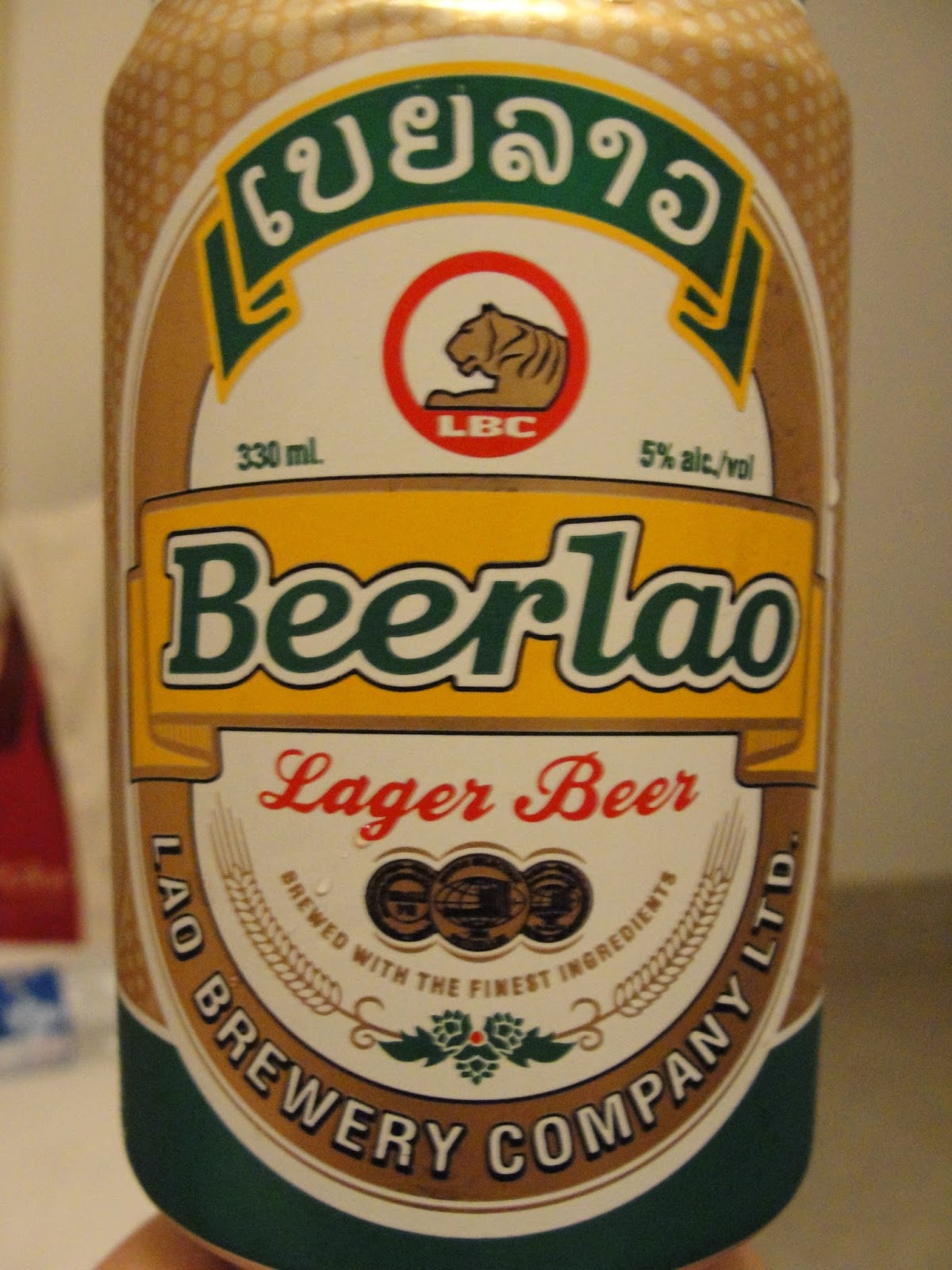 just as tasty as Vietnam's beer!

Lodging notes: Barrardleungxay Hotel had an awesome deal on their rooms, which were pretty nice - Kim's even came with a little gecko! Unfortunately it was 7km outside of town and other than a few markets and a couple aforementioned nightly food stalls, there weren't many eating options. Perfect if you have a car or plan to visit the casino across the street, otherwise go with something in the town center.

Savannakhet was challenging but so was Warsaw, and so was Rabat. And those worked out just fine. We've heard nothing but great things about Lao and we can't wait to see what comes next - so without further ado, to Vientiane!
Posted by Jen
Email ThisBlogThis!Share to TwitterShare to FacebookShare to Pinterest
Labels: asia, lao