So there's this web site called StickyRice that tells you all the fantastic places to eat around Hanoi. Recommendations from this site, and random google searches, formed the basis of a list which I carried around with me and religiously consulted every time we were contemplating lunch or dinner. 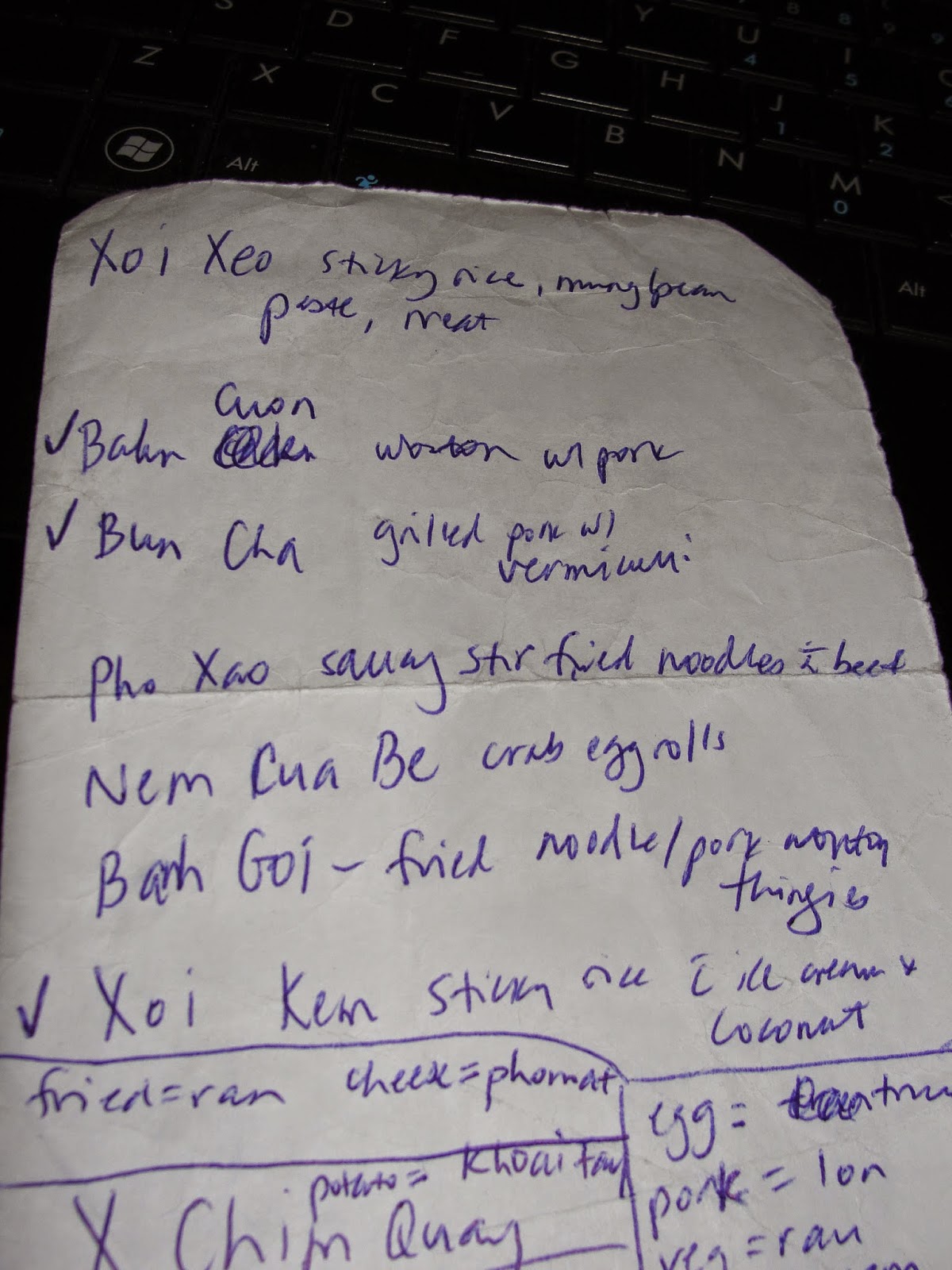 our mission
which we chose to accept

(Digression... We're on an average-cost-per-day budget so I'm including approximate prices below for fellow travelers. At the time of this post, $1 was ~21,000 dong. We generally try to withhold comments about how inexpensive things are here in Vietnam. It's equivalent to waving money around in front of people who don't make that much money. But for travel planning purposes, it's true that one can eat very well here for about $5-6/day, or $8-10 if one regularly indulges in coffee/beer and one's hotel doesn't have free breakfast. Or $20 if you insist on sit-down restaurants - but we highly discourage this! The food is bland and the atmosphere is boring. Head to the streets instead! ... End of digression.)

We found some real gems that we went back to several times.

Like bún chả. Ohhhhh, bún chả. The guy at the desk of our first hostel recommended a nearby restaurant and despite the price tag (60,000 dong per plate) we decided to give it a try. HOLY COW. This DIY deliciousness consists of a bowl of amazing broth with slices of roasted pork and pork sausage; a plate of rice noodles; and a bowl of green herbs. (Optional: chilis, garlic.) You add all the herbs you want and throw in a bunch of noodles at a time, and you enjoy. We tried at least three different versions and they all tasted different, but... 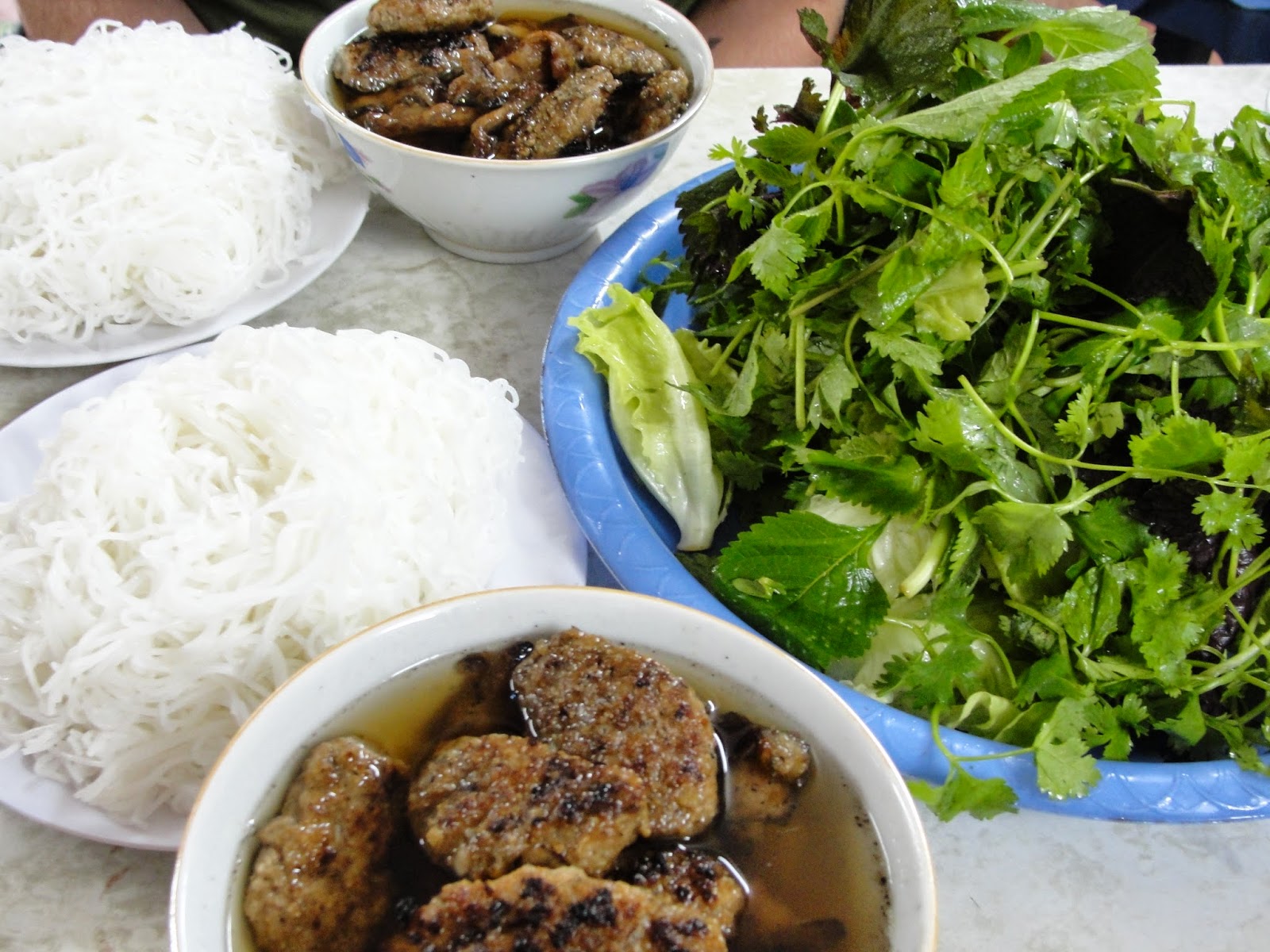 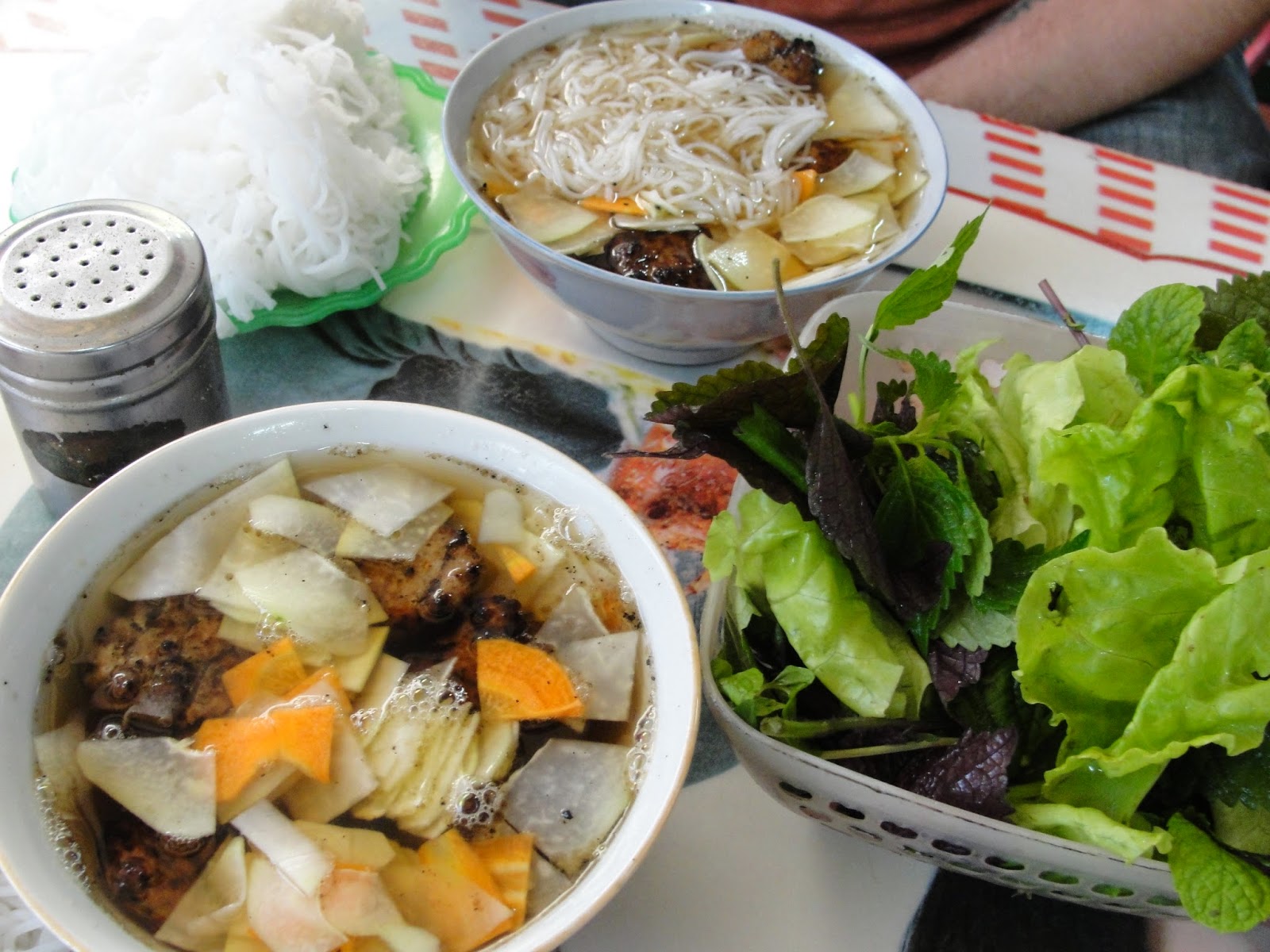 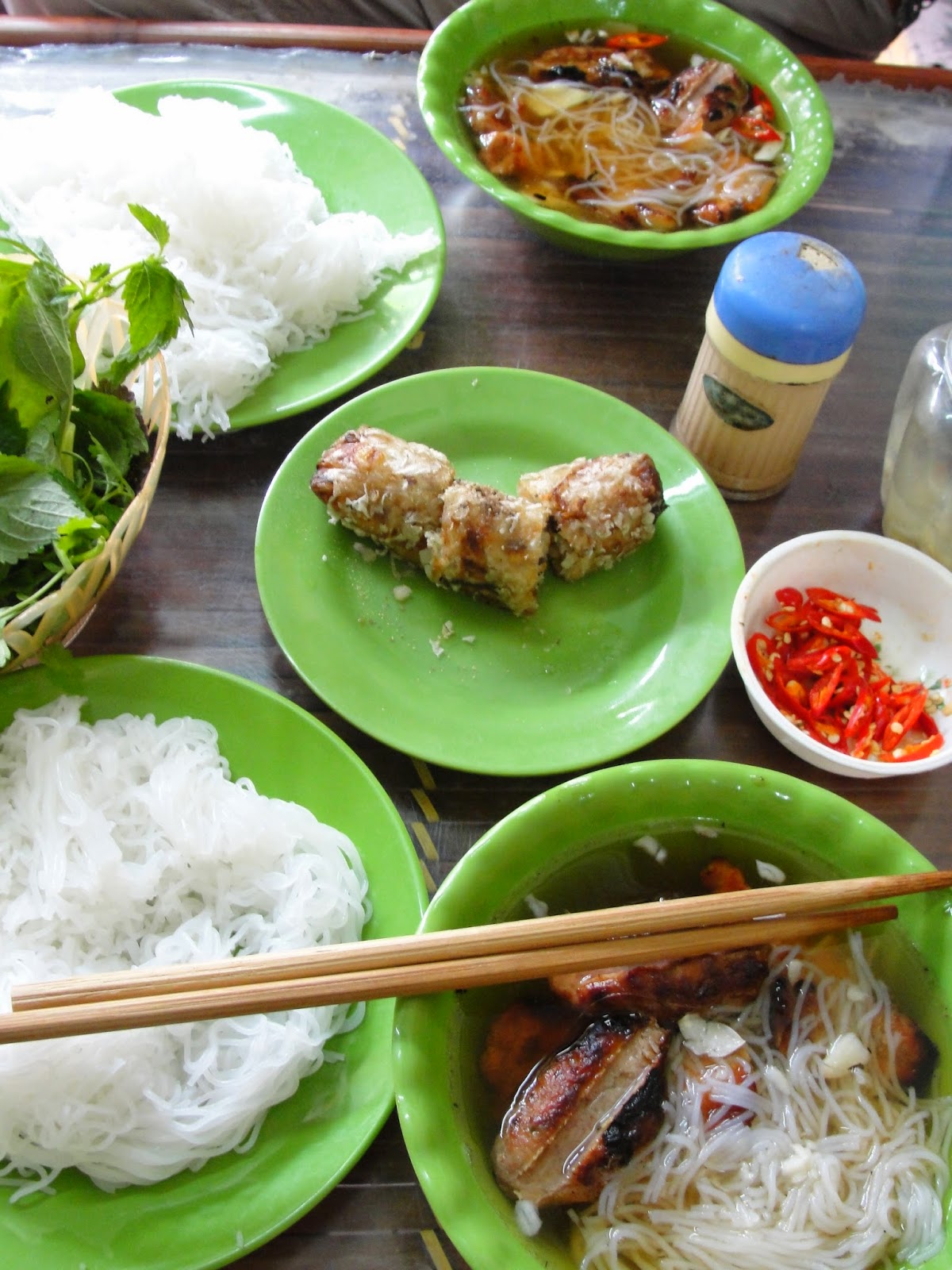 Or bánh cuốn - where the chef spreads a rice pancake batter on a large double-boiler type griddle, steams it until it's wonton in texture, throws a spicy pork or chicken mixture in the middle, and wraps it all up. Also served with a delicious bowl of broth and green herbs. 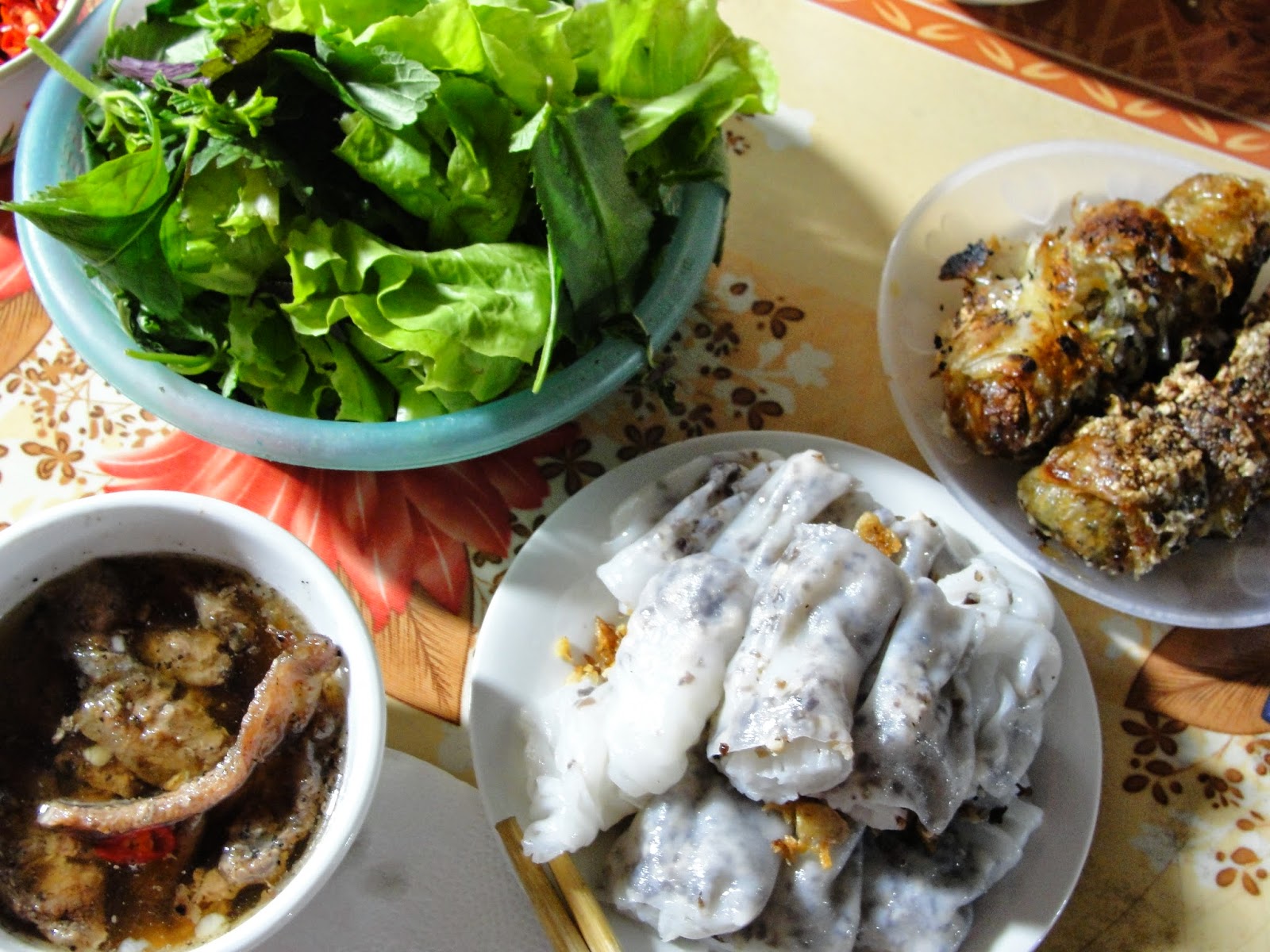 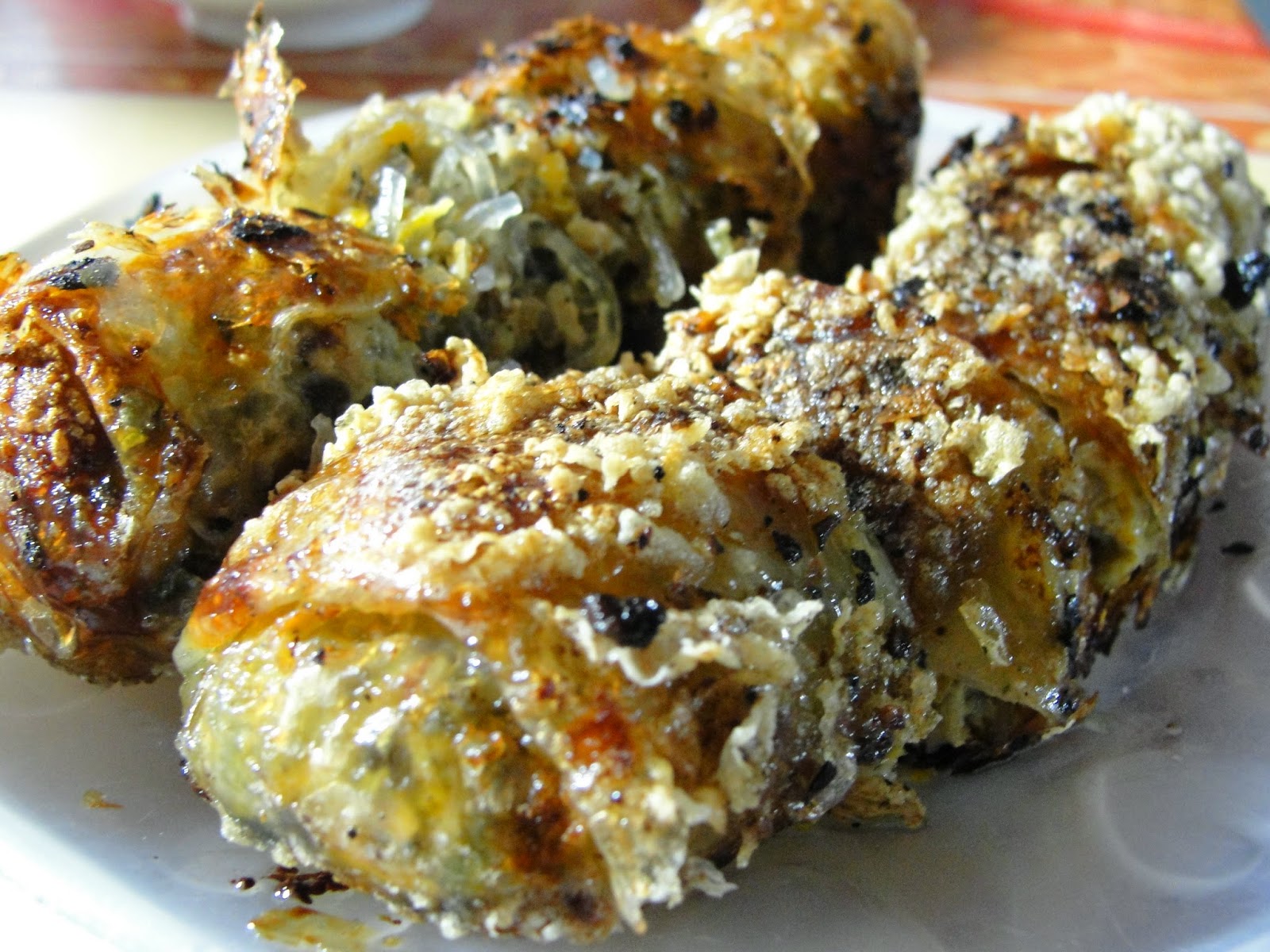 they are usually served at places
that have bún chả or bánh cuốn
(like the above street stall - 10,000 dong)

Loving Hut's com chay ("vegetarian food") was just short of awesome, especially after four days of meat plus rice noodles/rice wontons/fried rice. Clean and light, it was just what our stomachs needed. 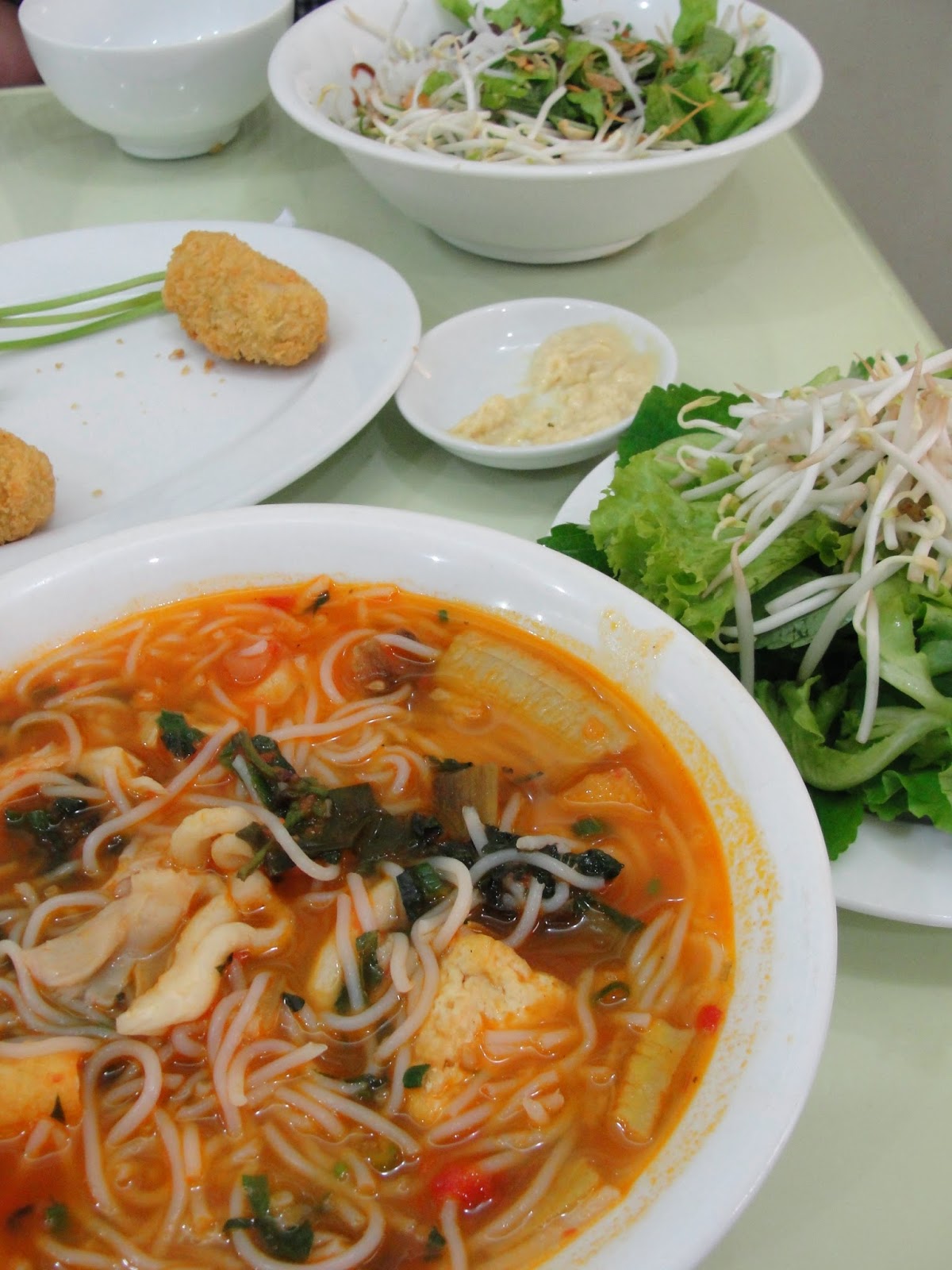 his pho "bo" (top) had better flavor,
but my tomato-based "seafood" soup (bottom) was really interesting too 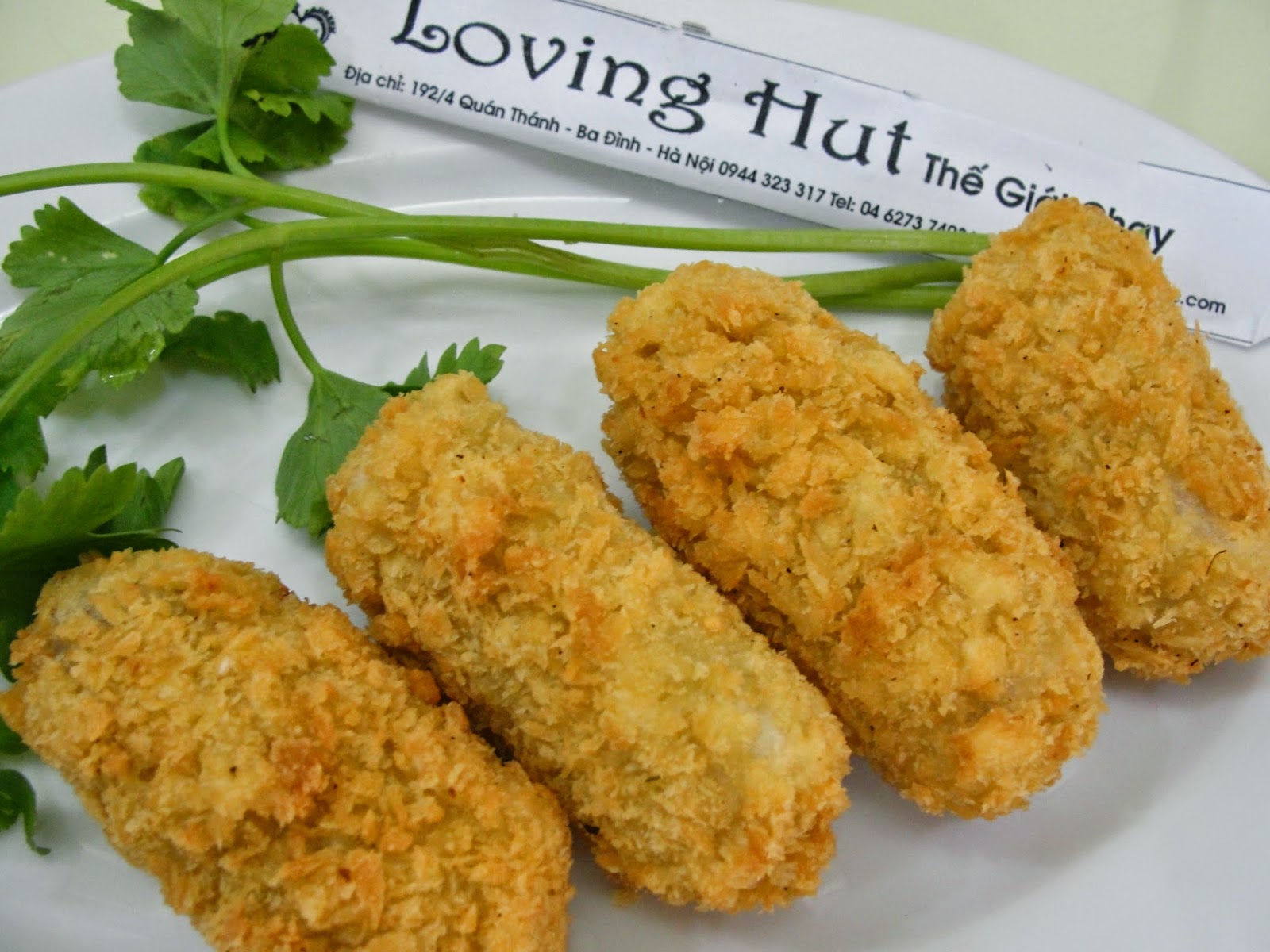 and the spring rolls were to die for

One day we found this sidewalk stall of salted pork and spicy noodle deliciousness. No idea what it's called (the dish or the stall) - it's near Old Quarter, so if you find it please let us know! 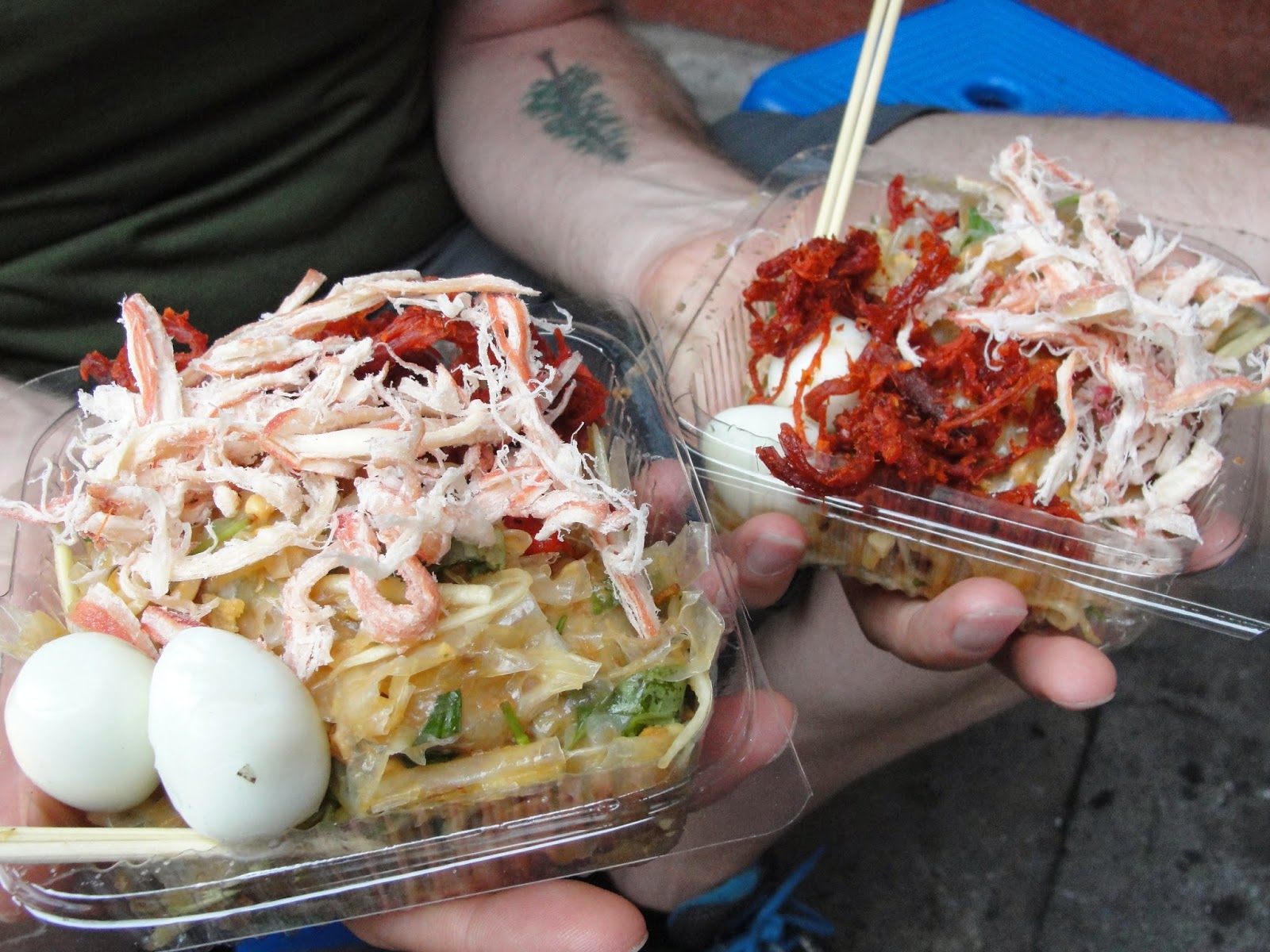 StickyRice recommended a treat called kem xôi, probably because a key ingredient in this dish is sticky rice. The other key ingredient is ice cream. Sounds weird, but it totally worked. 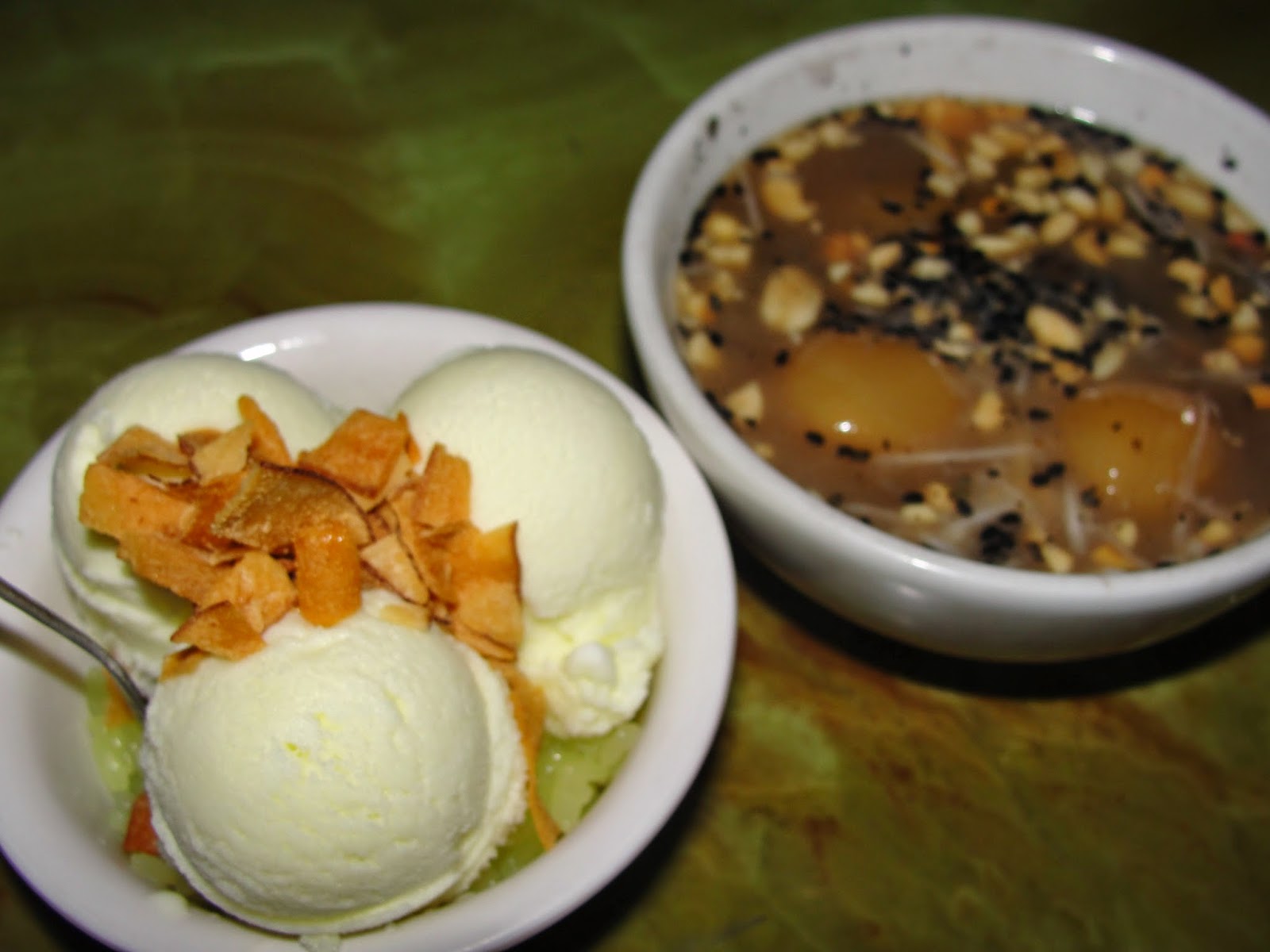 we walked about 4km round trip for this

I randomly decided to try the "china cake" at Thu Nga while Patrick enjoyed his kem xôi. The "cake" was so interesting that we went back the next day for another bowl. Mung bean wrapped in rice dumplings, all in a gingery peanut warm broth...  Good thing we got a few bowls our first visit because they didn't have any during our second visit! 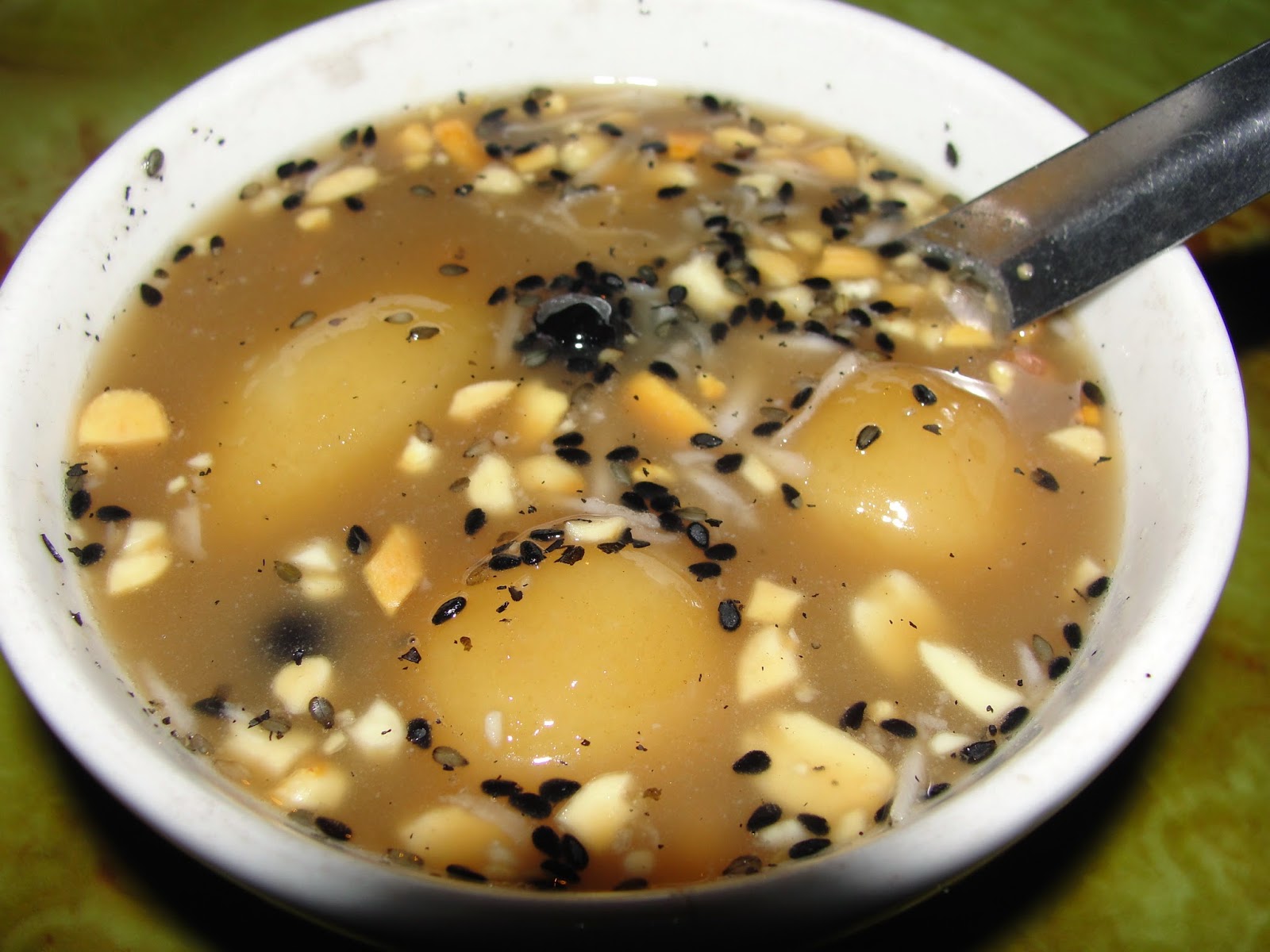 And while I was enjoying china cake bowl #2 Patrick gave the che nep a try. The menu described it as a smoothie but there was nothing smooth about it. The textures were really nice and the flavors were light and refreshing. 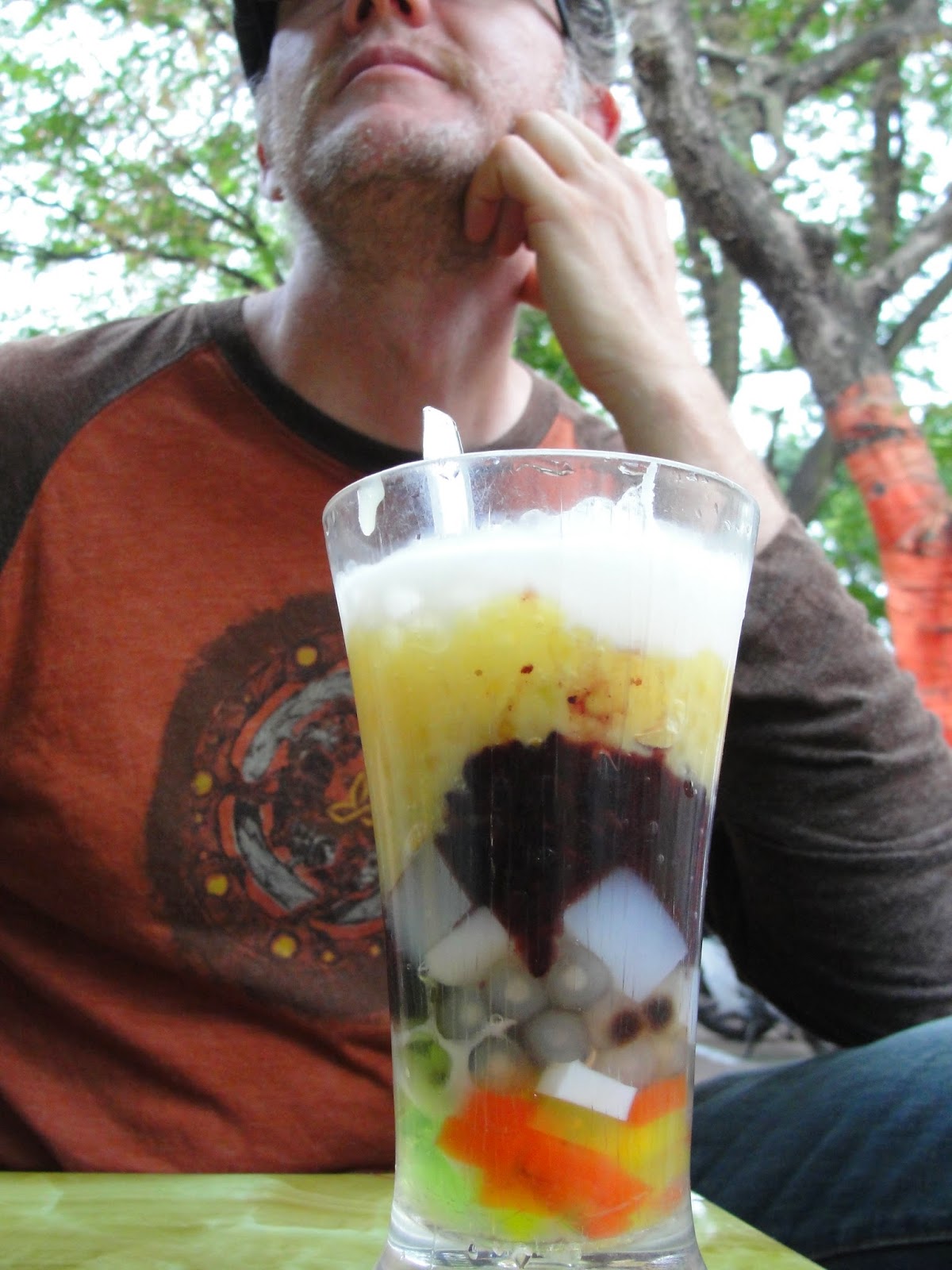 There are a few kem xôi shops around Thu Nga but we were loyal to this place, so we can't speak to the quality of the others.

Walking to and from Thu Nga we passed an ice cream mecca called Kem Tràng Tiền in what appeared to be a parking garage. Turns out it's like their In-N-Out burger, a (motorbike) drive-through of inexpensive deliciousness. Sometimes when we passed, the lines were out the door of this huge place and every day that we passed, dozens of people were walking by with a cone. One day we finally went in and tried this famous coconut milk ice cream. A local who spoke English recommended their signature flavor and we're so glad he did - it was really, really nice, and just 12,000 dong for a scoop. No photo of Patrick's because it was gone in 15 seconds. 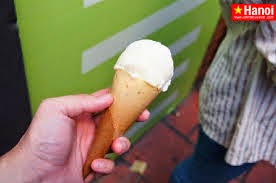 this photo will have to do
(thanks, TripAdvisor UK)

On our last night we stumbled upon Pho Gia Truyen, eyed the line, and decided to give it a try. We were a little self-conscious because we were the only white folks in the place, and we didn't know exactly what the pho ingredients would be, and there seemed to be a Soup Nazi process to ordering. But we muddled through at the counter and the nice staff helped us find seats in the cramped, crowded eating area. It ended up being the best pho we've had in our six weeks in Vietnam. The beef and pork (which we didn't know were beef and pork at the time) were perfectly cooked and the broth was slurpworthy. 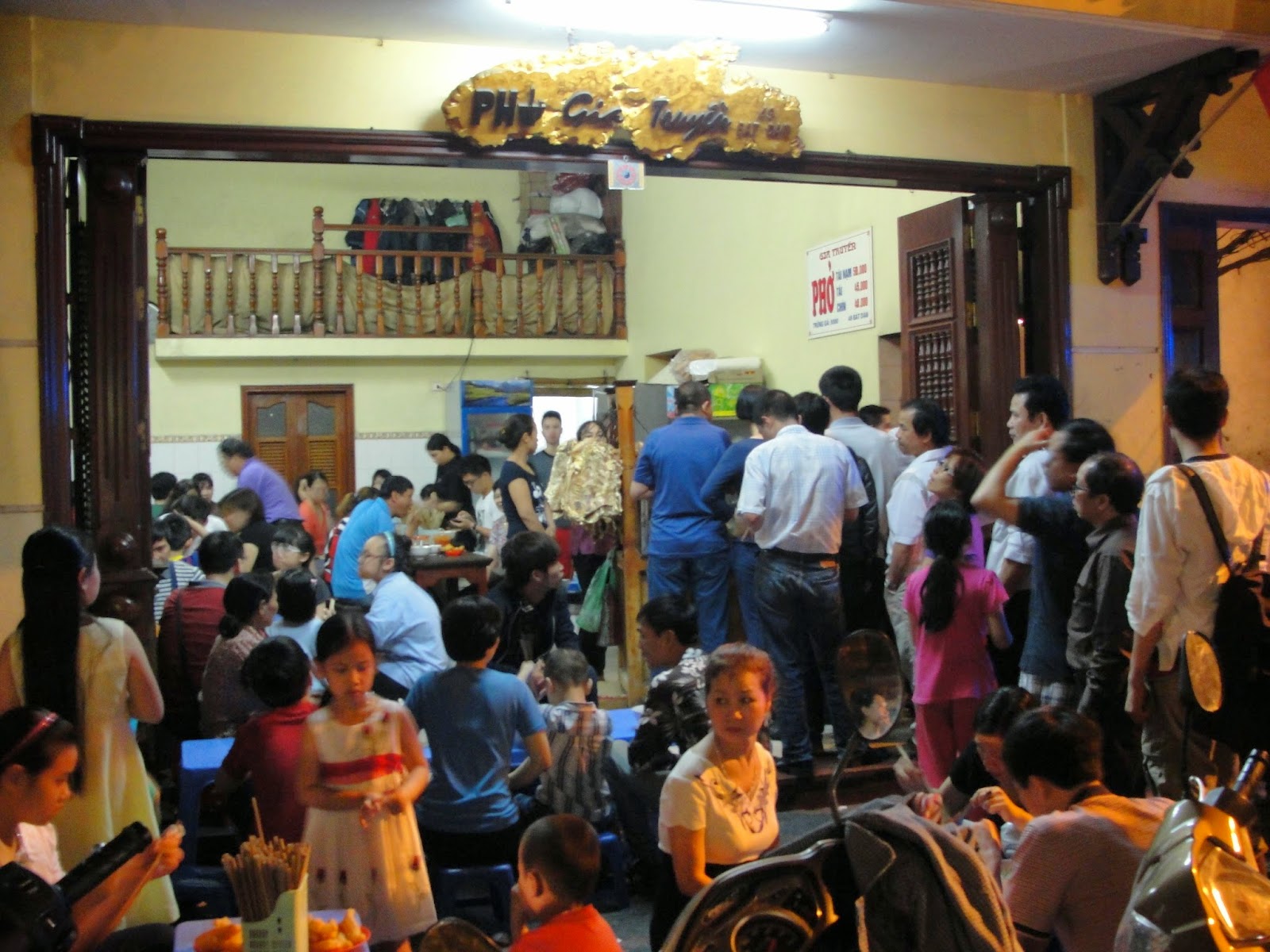 photo of the line
because we were too busy slurping during dinner
(40,000-50,000 dong depending on which dish you choose)

When we got back to the hotel we looked up the names of the dishes and were not only relieved to find that we'd eaten beef and pork, we were also surprised to learn that this restaurant was featured on Anthony Bourdain's No Reservations. (Note to selves - YouTube all those Vietnam episodes during our next week-long vacation from our vacation.) Suddenly the whole Soup Nazi vibe made sense.

And some days we were so tired from the noise, the motorcycles, the smog, and the gray cloudy days that we had a really hard time finding anything that looked interesting or edible. On those days we resorted to bad decisions like eating at the night market. Or getting yogurt from the corner convenience store and calling that dinner. We don't recommend those decisions - it's HANOI, after all!

Actually, if you google "Hanoi food recommendations" you will get a bazillion results of blog posts written by travelers just like us who loved most of the food we sought out or ran across in this foodie city... So, dear readers, help your fellow travelers out! If you have additional recommendations please leave them in the comments. (Especially if you find bahn goi - we never managed to!)
Posted by Jen
Email ThisBlogThis!Share to TwitterShare to FacebookShare to Pinterest
Labels: asia, vietnam