When we stopped over in Huế the first time, it was just to break up a big train ride and get a feel for the city before Kim's visit. Based solely on four hours exploring that one night, our guts had a good feeling. Our second time through we planned three days and after day one we were happy to learn that our guts had been right. (Aren't they always?) It was our last stop in Vietnam and we liked it a lot.

Huế had a familiar, comfortable feel about it. It's divided by a river and has a few walkable bridges... common features in cities we tend to enjoy. (Go figure!) 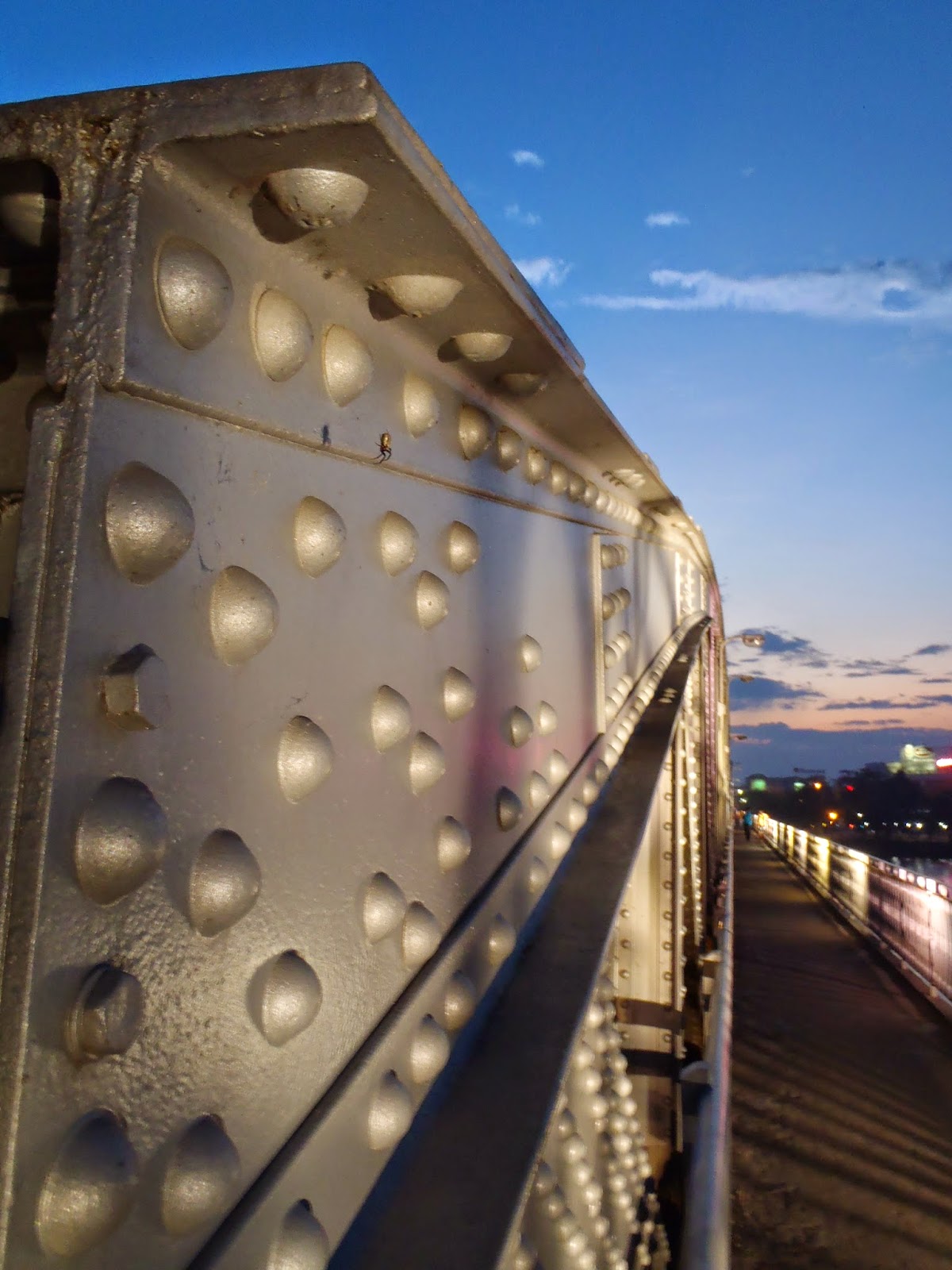 The easily-navigable streets are lined with trees, flowers, and colorful red banners (no idea what they said, but they were pretty). The motorbikes were calmer here than in Ho Chi Minh or Hanoi. And as with everywhere in Vietnam, the people were all friendly.  There's plenty to do in and around Huế but we felt no pressure to rush around or see everything; we mostly just wandered aimlessly and enjoyed ourselves. It's a really good city for that.

Huế's main attraction is in the center of the city. In the early 19th century Emperor Gia Long moved the capital here and built a giant (and I do mean giant - 2km x 2km!) citadel. Admission was a little spendy but the dozen or so ornate gates, several temples, numerous gardens, and handful of ancient musical instruments on display were really gorgeous and we're glad we went.  That said, after about an hour in blazing heat with no guide, we really had no idea what we were looking at other than the remains of buildings housing some very rich people, so we ended our tour a little early. 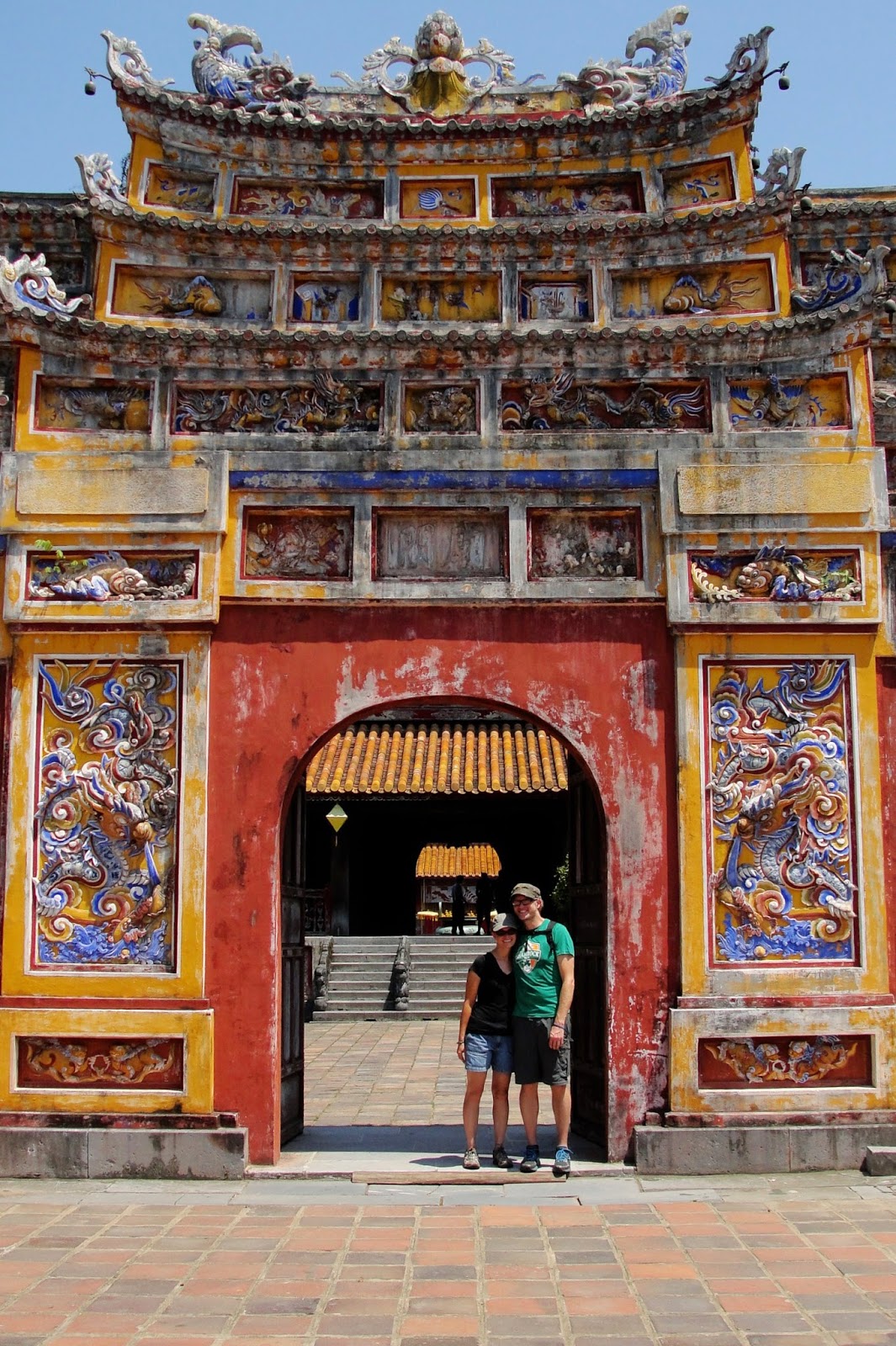 royalty for a day 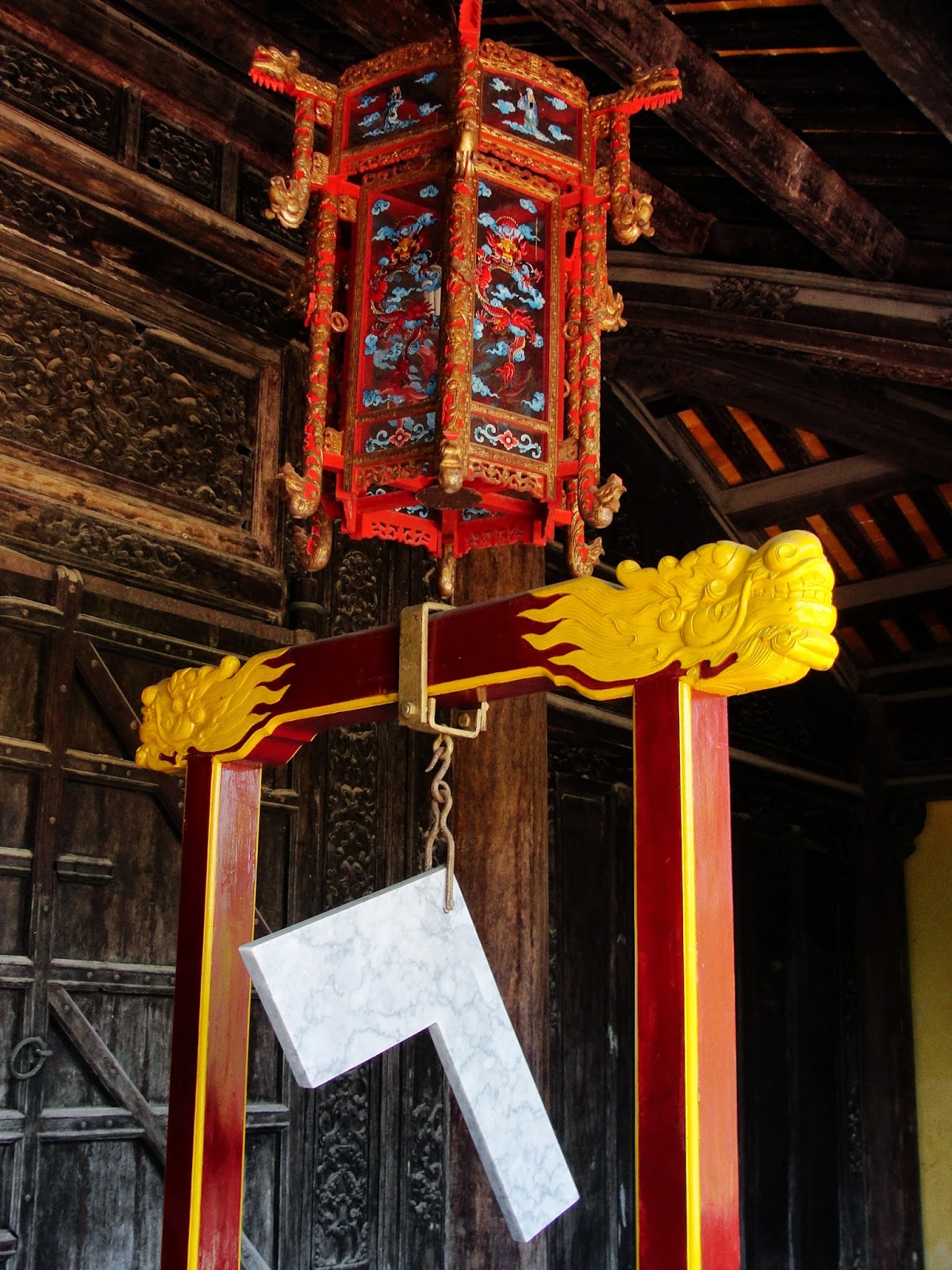 "the big stone chime"
(that's really what it's called) 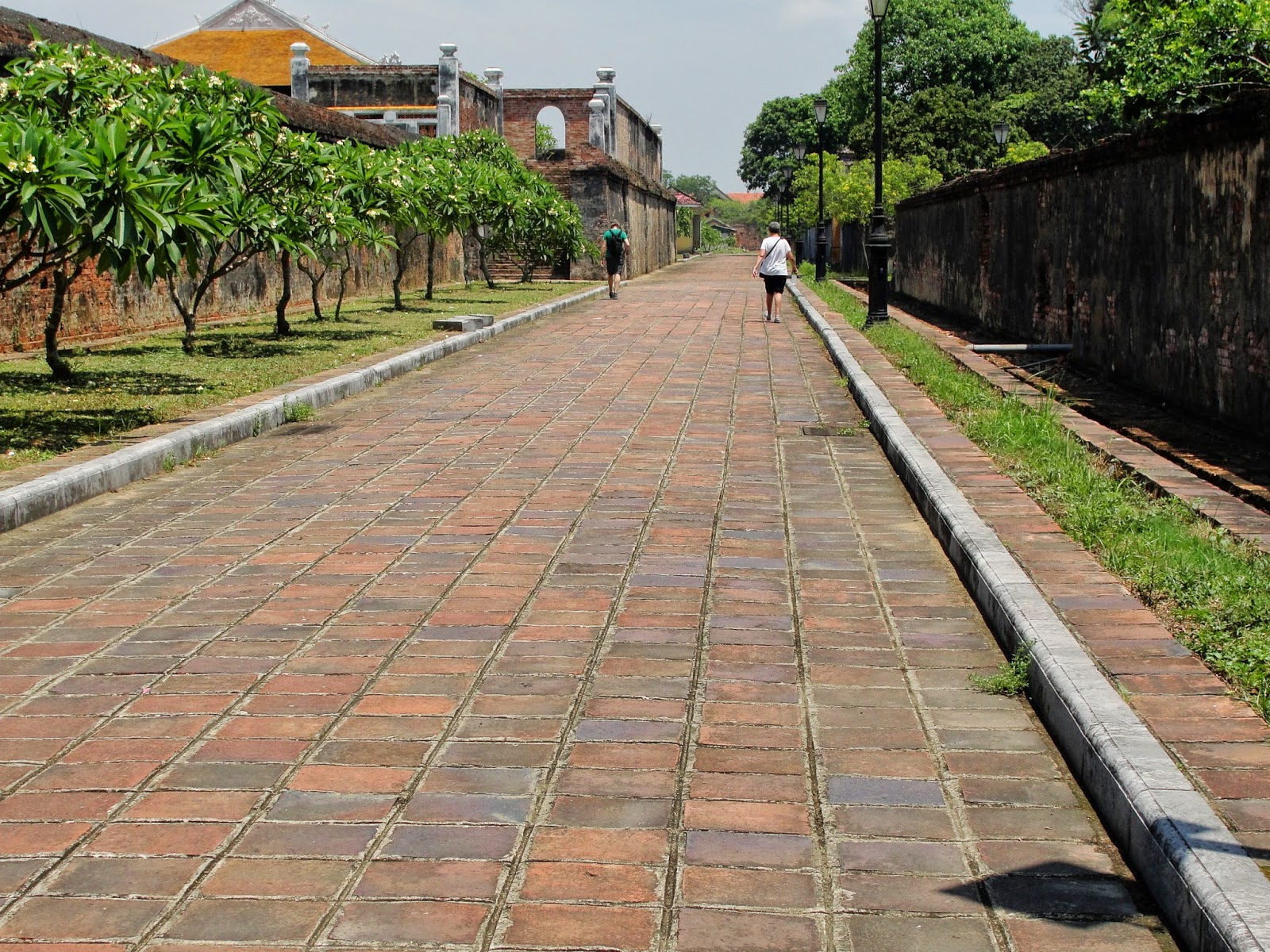 not included in price of admission:
hat, umbrella, and ice cubes

Huế was a focal point of battle during the "American" war, so much so that the citadel (along with most of the city) was mostly destroyed. They've been rebuilding ever since and thanks to UNESCO's World Heritage Site declaration in 1993 Huế has really come back to life. But reminders of the past are ever-present. 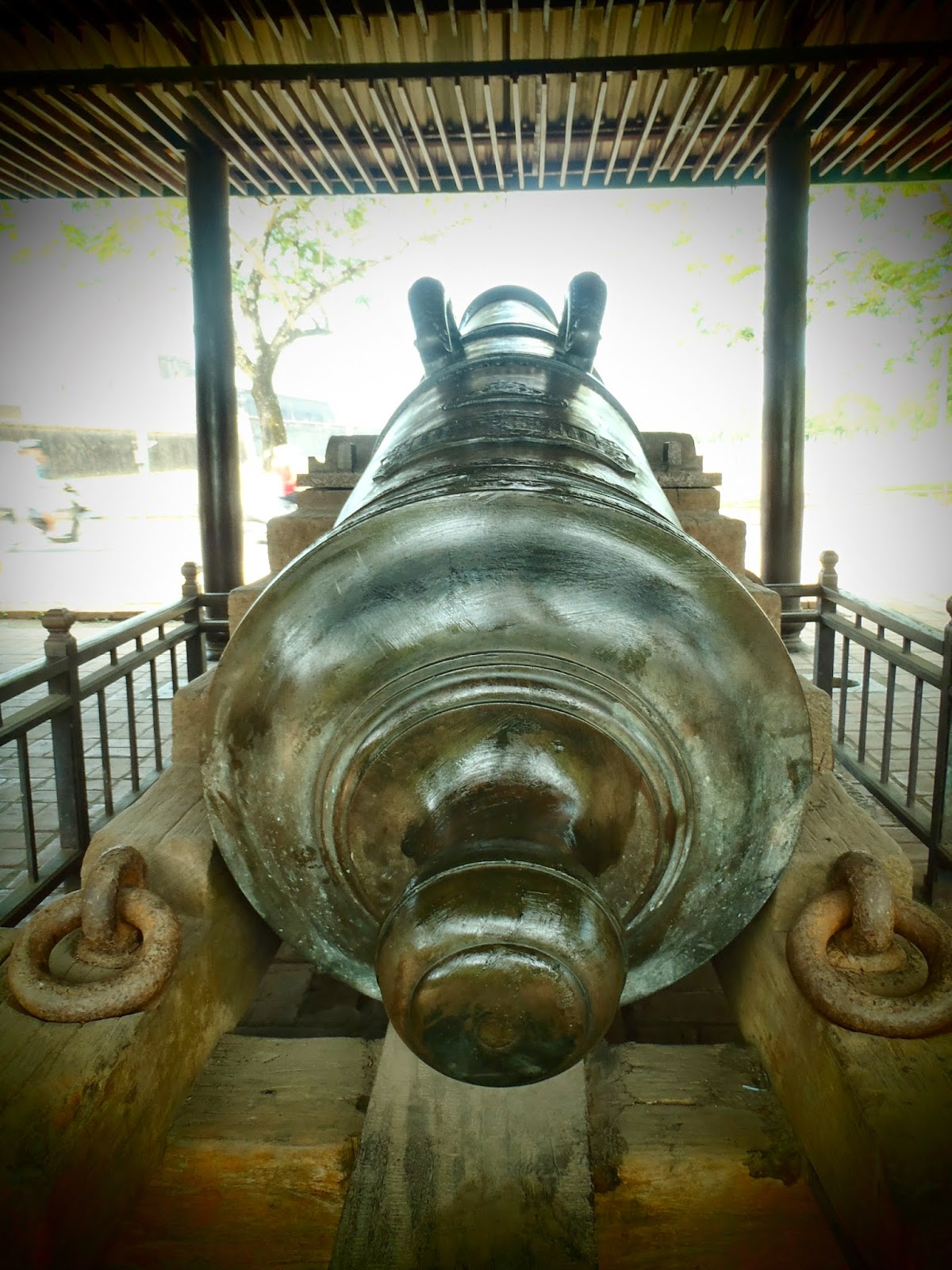 As with every city in Vietnam, the central market offered everything you could possibly imagine but we didn't spend much time there. Instead, one day while walking to the bus station we ran across a smaller local market and wound through the streets exploring. We bought some bananas and I picked up a few fresh eggs from a really cute elderly lady who charged me about $0.20. The way she smiled as I handed her the money, she probably made off on the deal... but $0.20 for my all-natural hair conditioner was just fine with me.

One afternoon we got ambitious and walked to the Ho Chi Minh museum to see about some alleged old photographs of Huế. If "we went to the HCM museum" sounds familiar, it's because every single city in Vietnam seems to have a HCM museum and we indeed visited a few of them. The ones we saw featured the story of his life, lots of war propaganda, and random artifacts like the toothpick he used when he visited tiny XYZ village in 1946 - interesting once, not so much the second or third time. But they also occasionally featured temporary displays (like old photographs of Huế) that made them worth a visit.

One long hot walk later the museum was closed and the temporary exhibit appeared to be down anyway, so we wandered around the beautiful riverside statue garden... 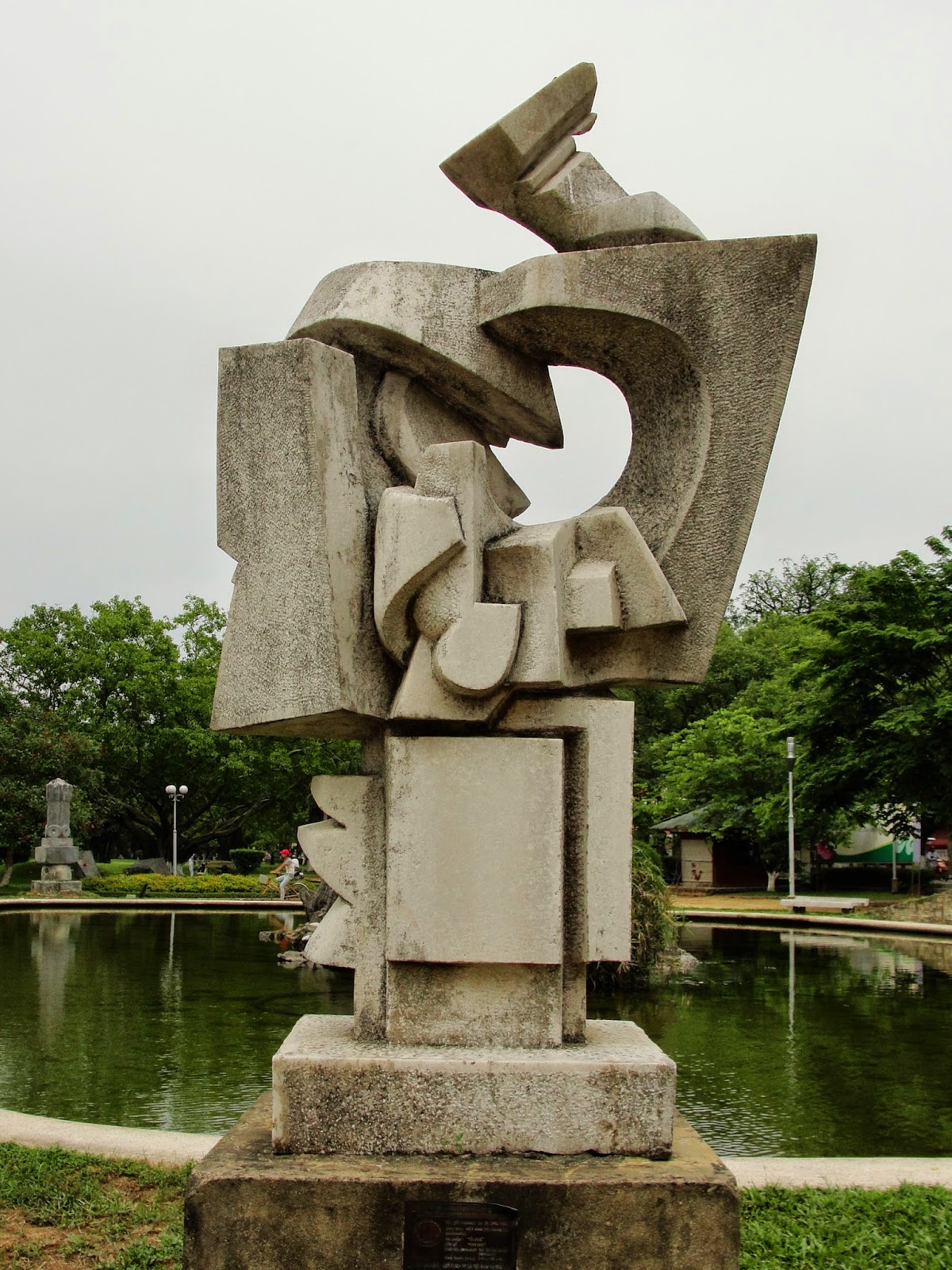 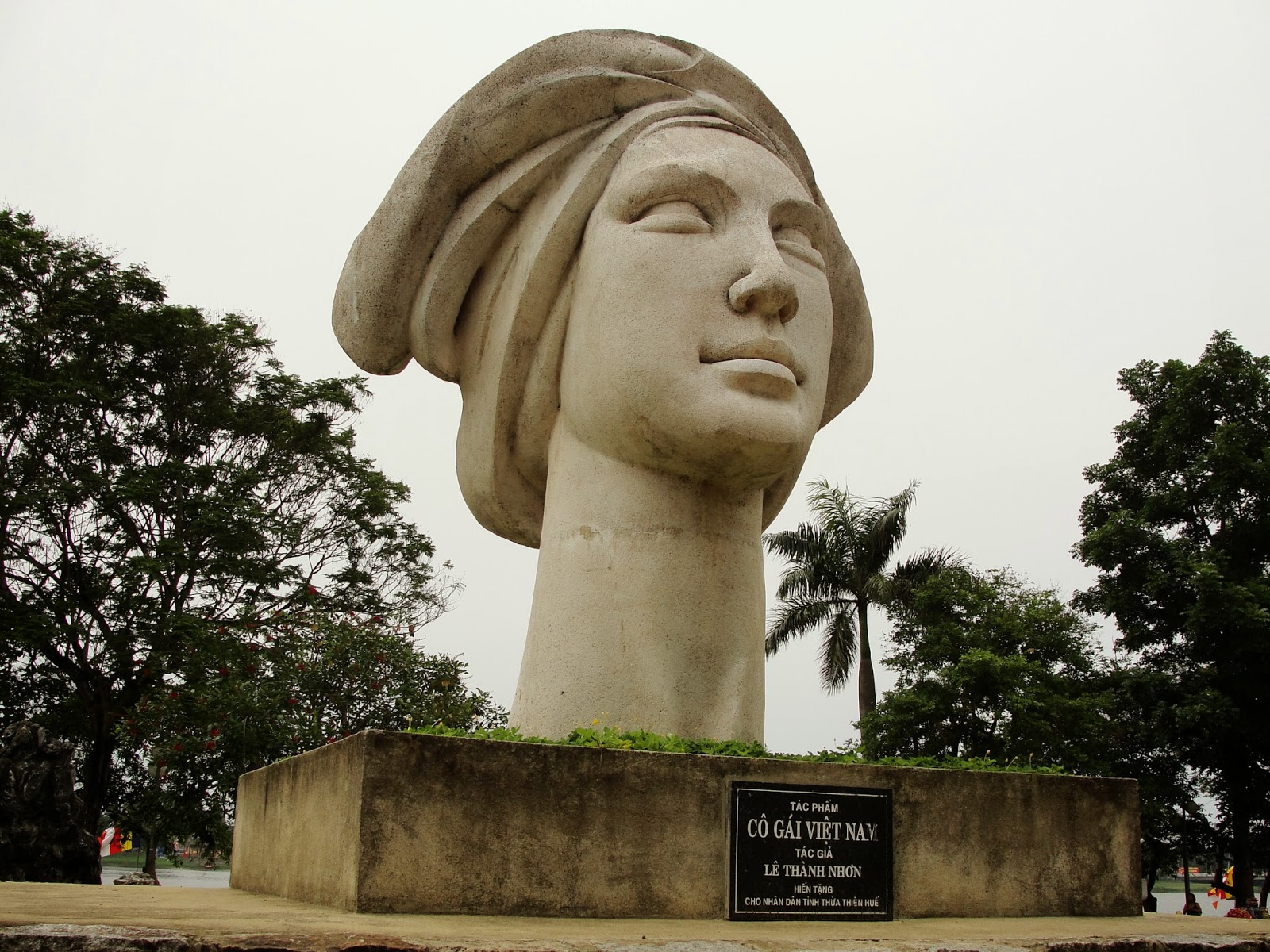 women were predominantly featured
in the statue garden 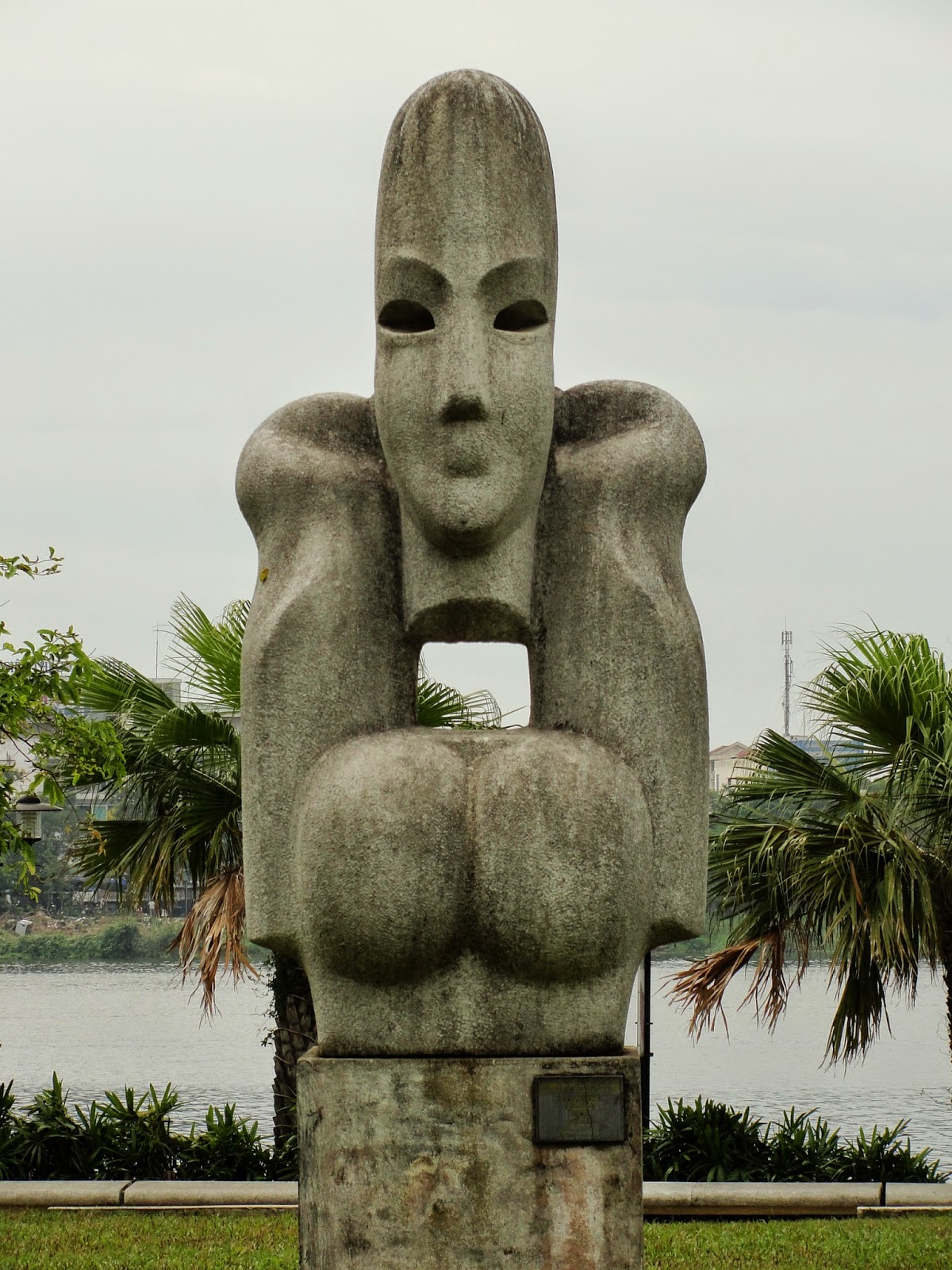 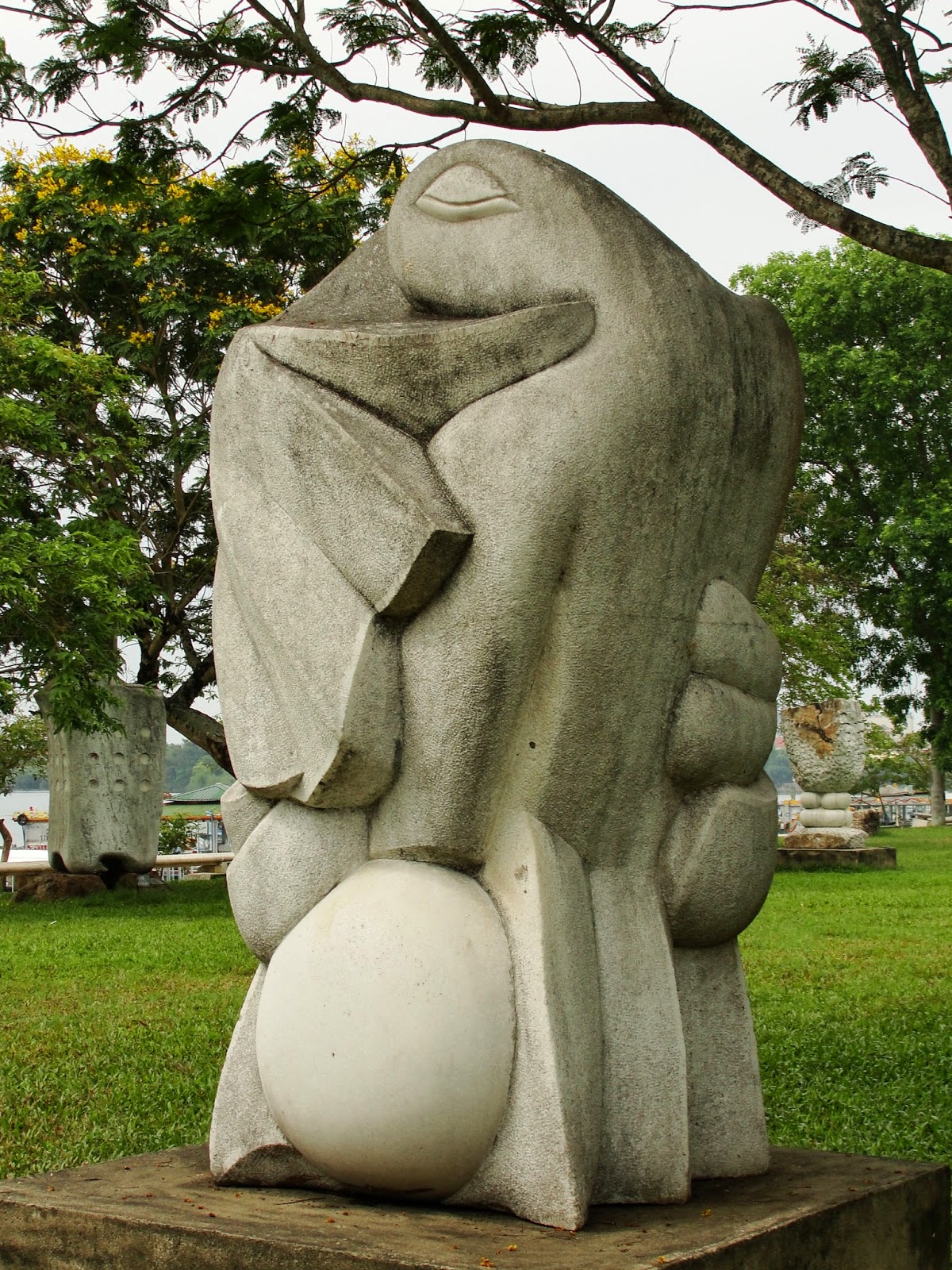 Probably a much better use of our last afternoon.

Meanwhile, Kim took a tour of some of the local pagodas/ temples which included a boat ride down the "perfume" river - named because every autumn the orchard blossoms fall into the river and supposedly create a wonderful aroma as they float their way through the city. Our timing was obviously off so if you have a chance to experience this, please report back!

Anyway.  All this egg talk must mean it's time for the most important topic...

Food notes: the food in Huế was no match for Hanoi, but we still found some hits - and a few misses. 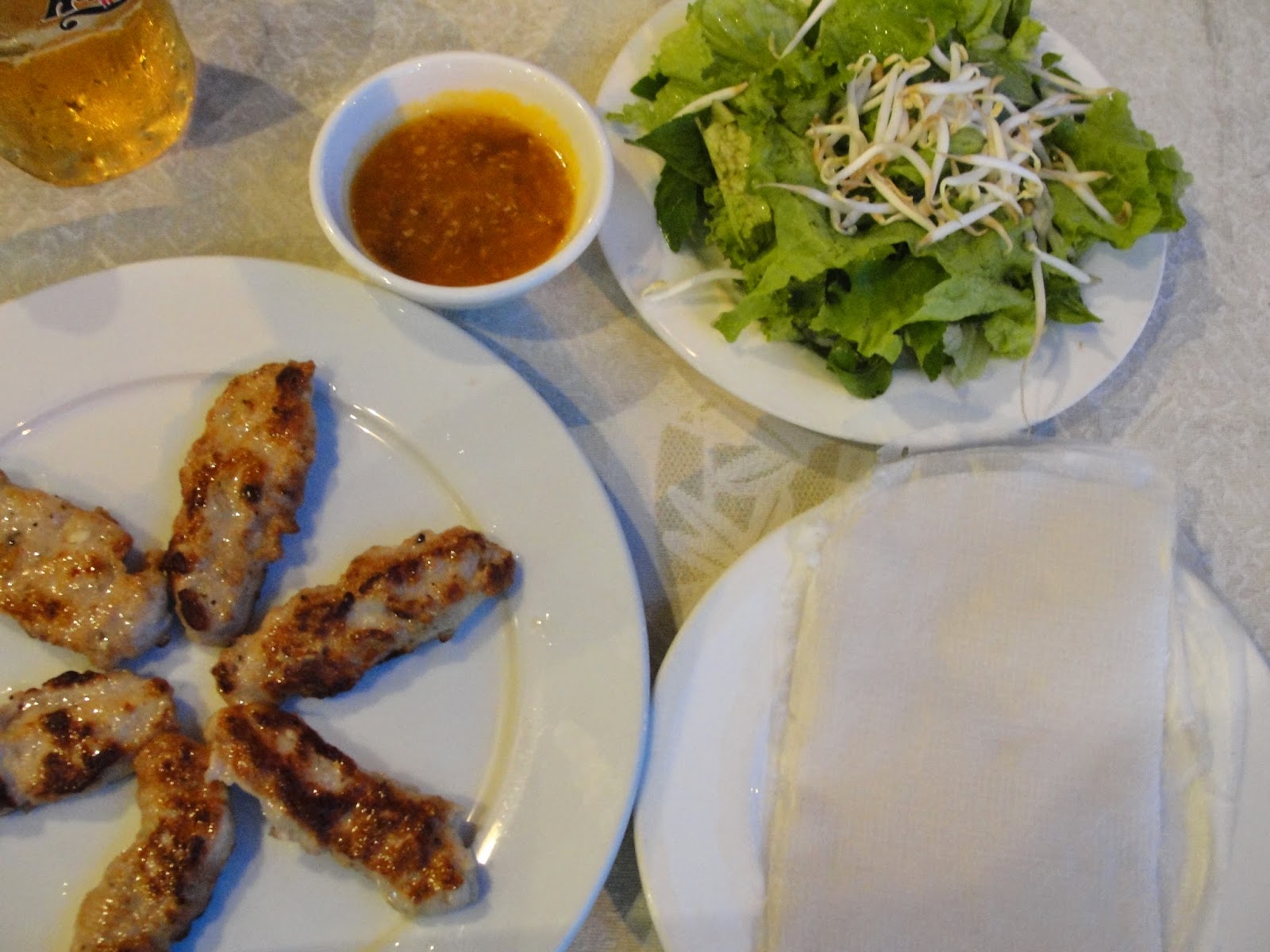 grilled pork with herbs that you DIY into rice paper wrappers
and peanut sauce... wow, the peanut sauce 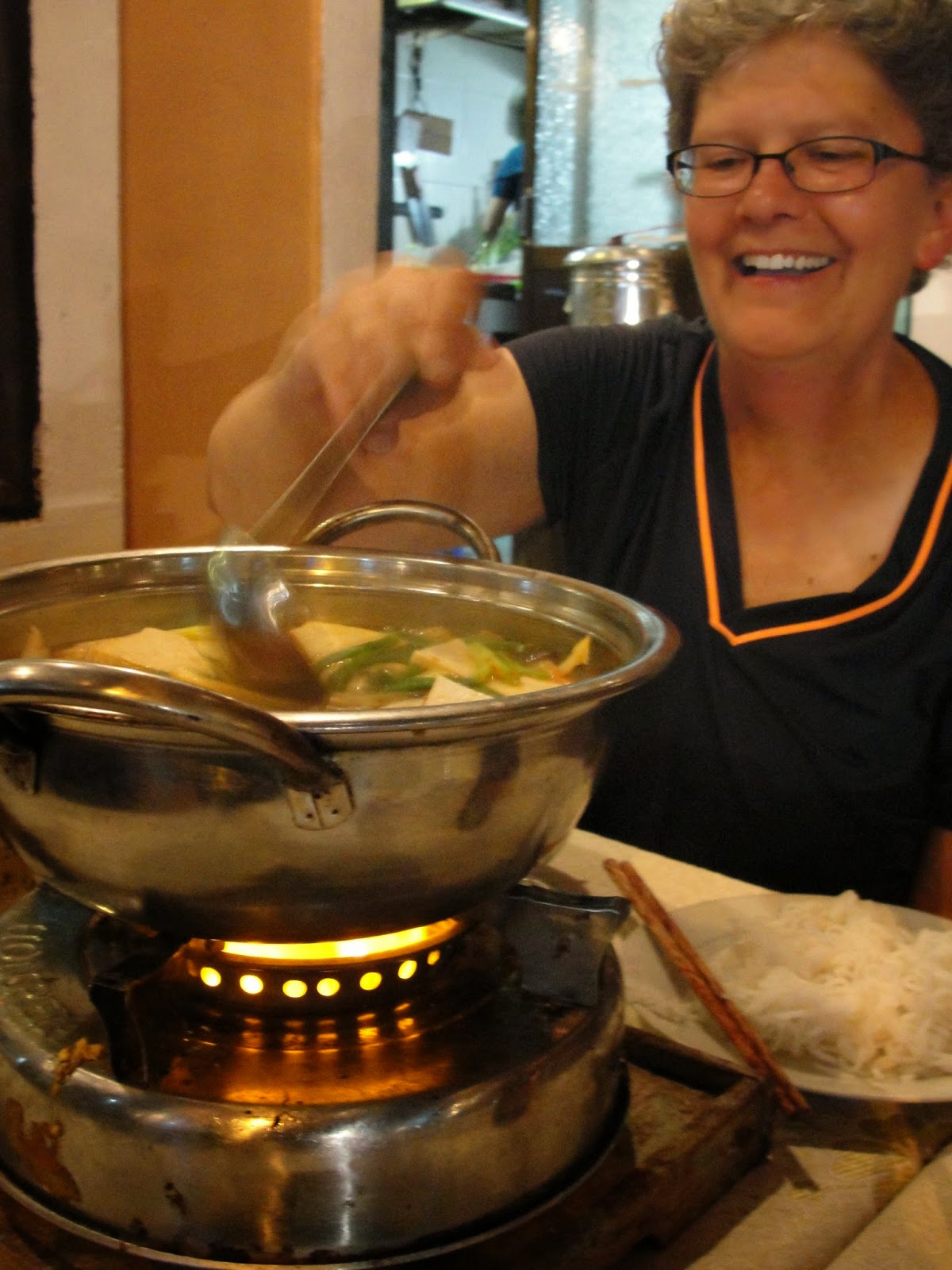 Kim's veggie hotpot
was like your mom's veggie stew - delicious! 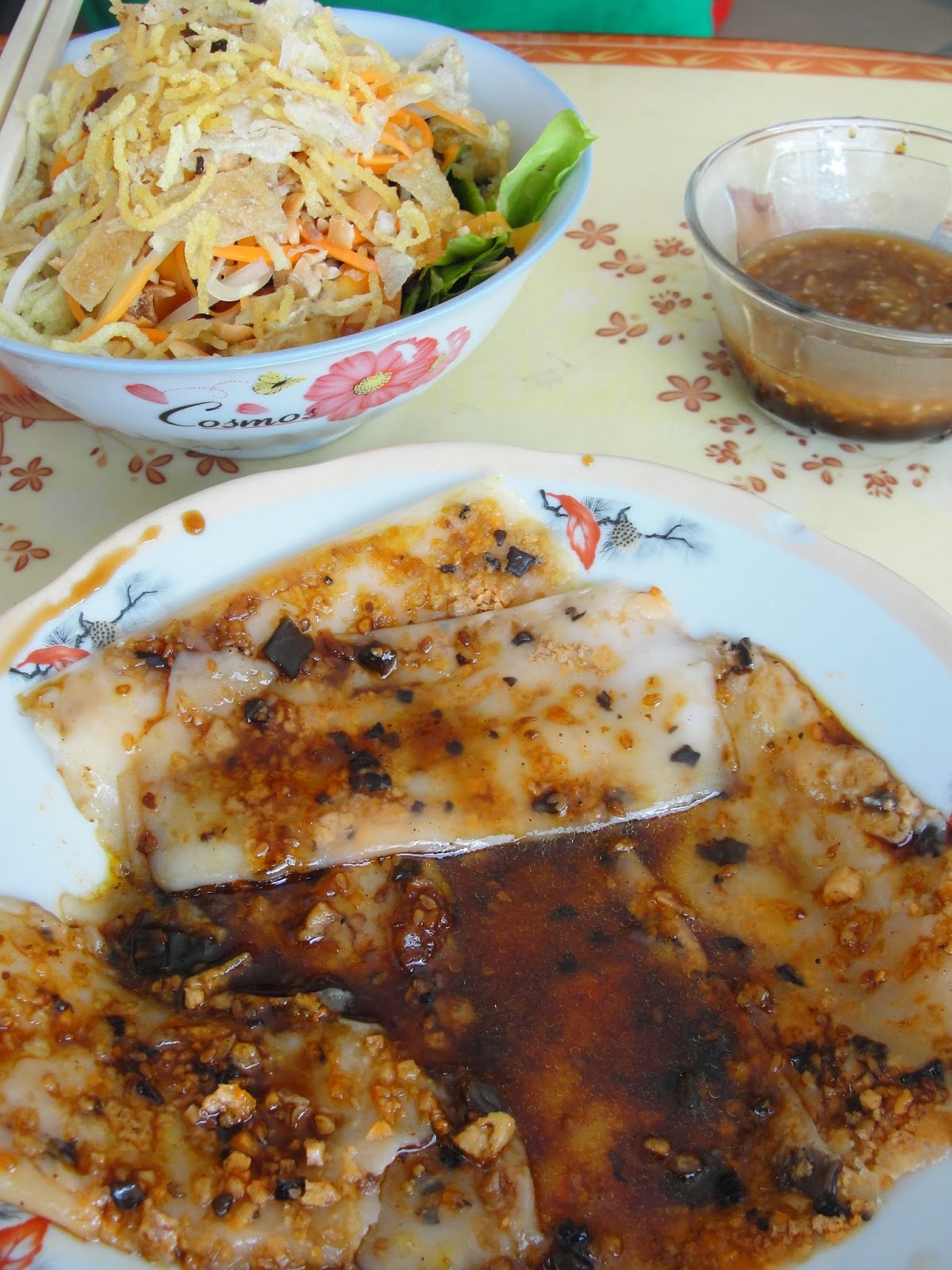 our 2012 Rough Guide recommended Hong Nga, and
to our surprise it was still there, open, and delicious! 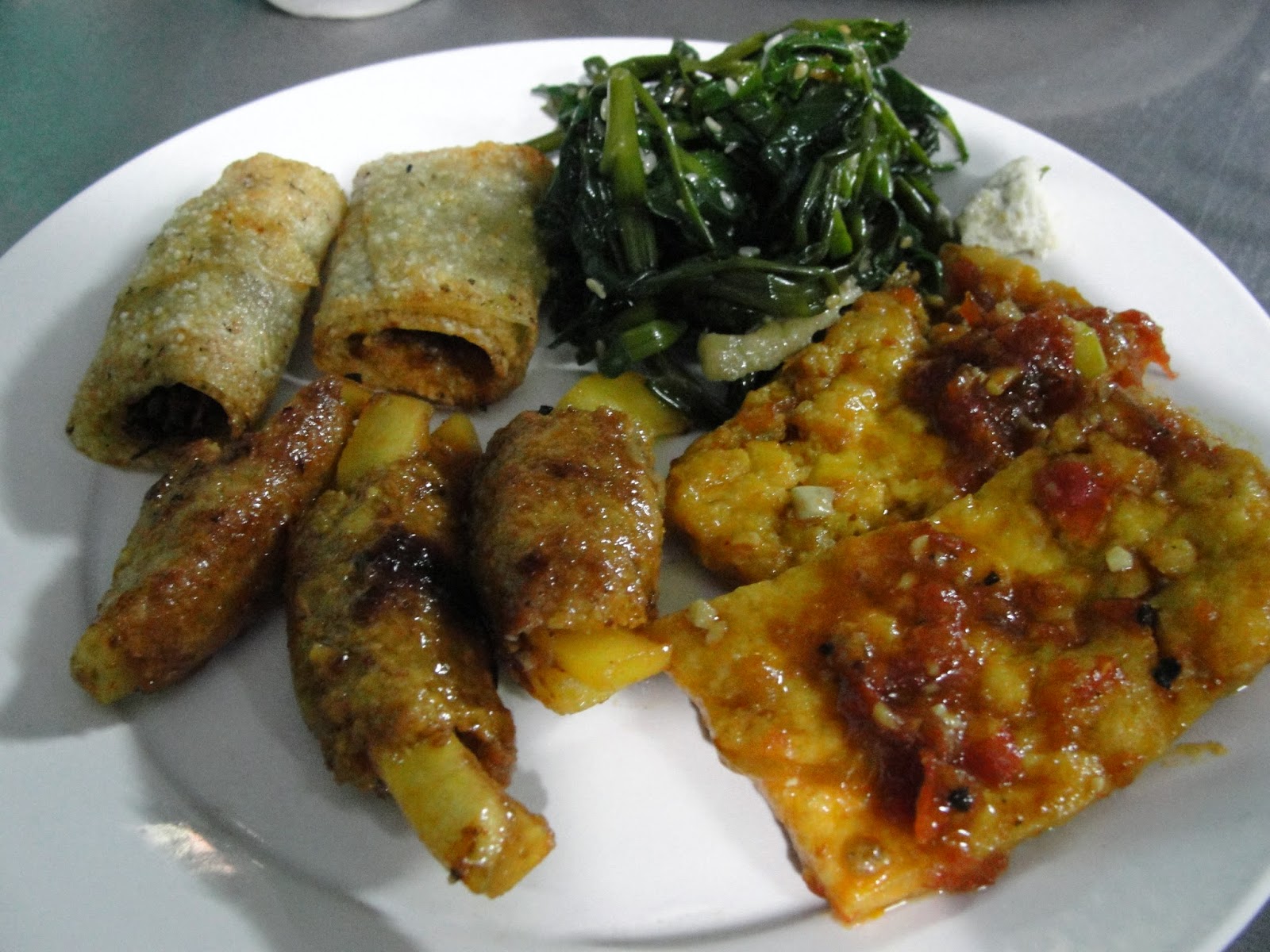 com chay right around the corner from our hotel
(the ambiance was akin to eating in a Home Depot
but the food was delicious!) 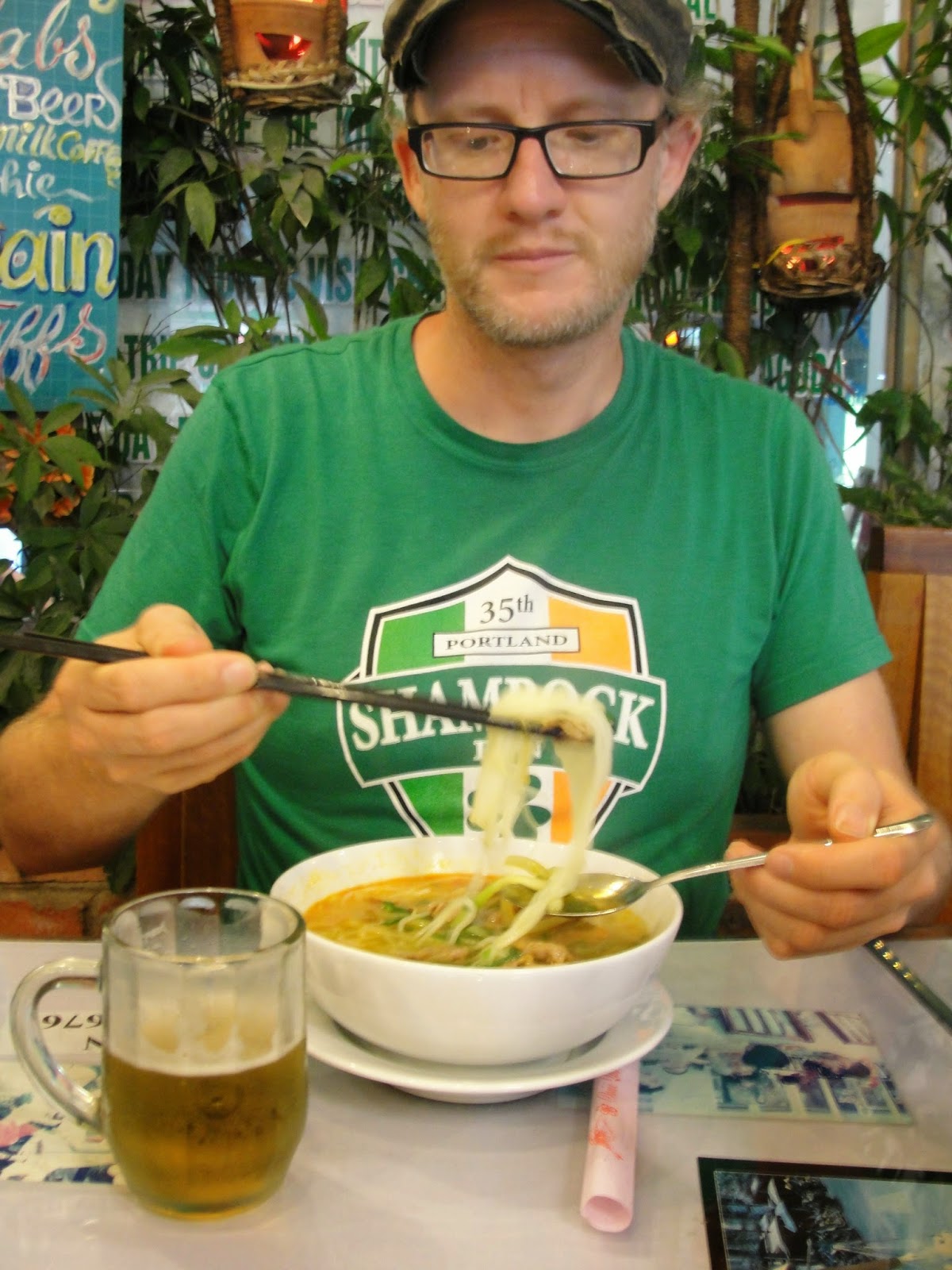 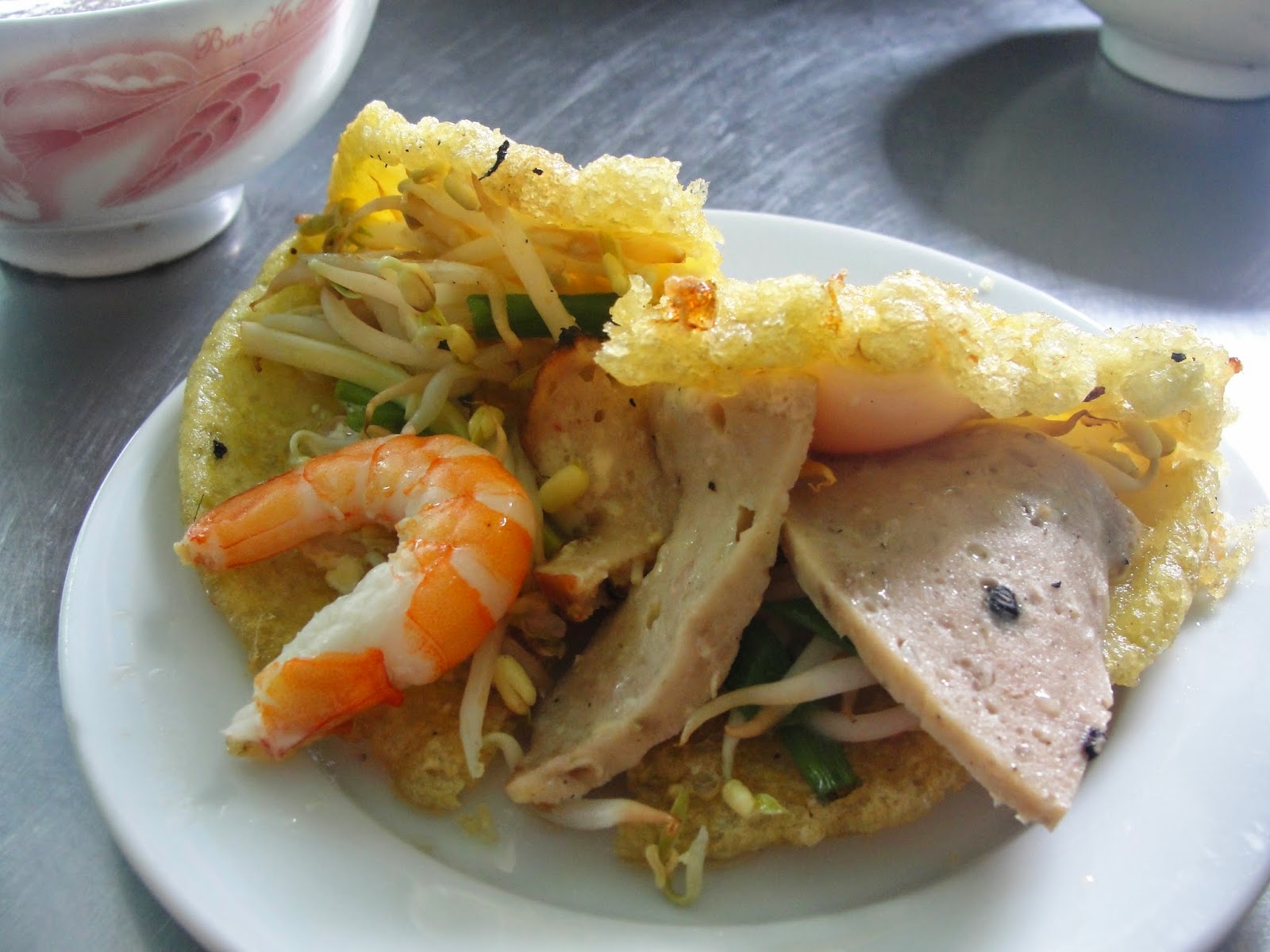 definitely tasty... but small -
be sure to order two! 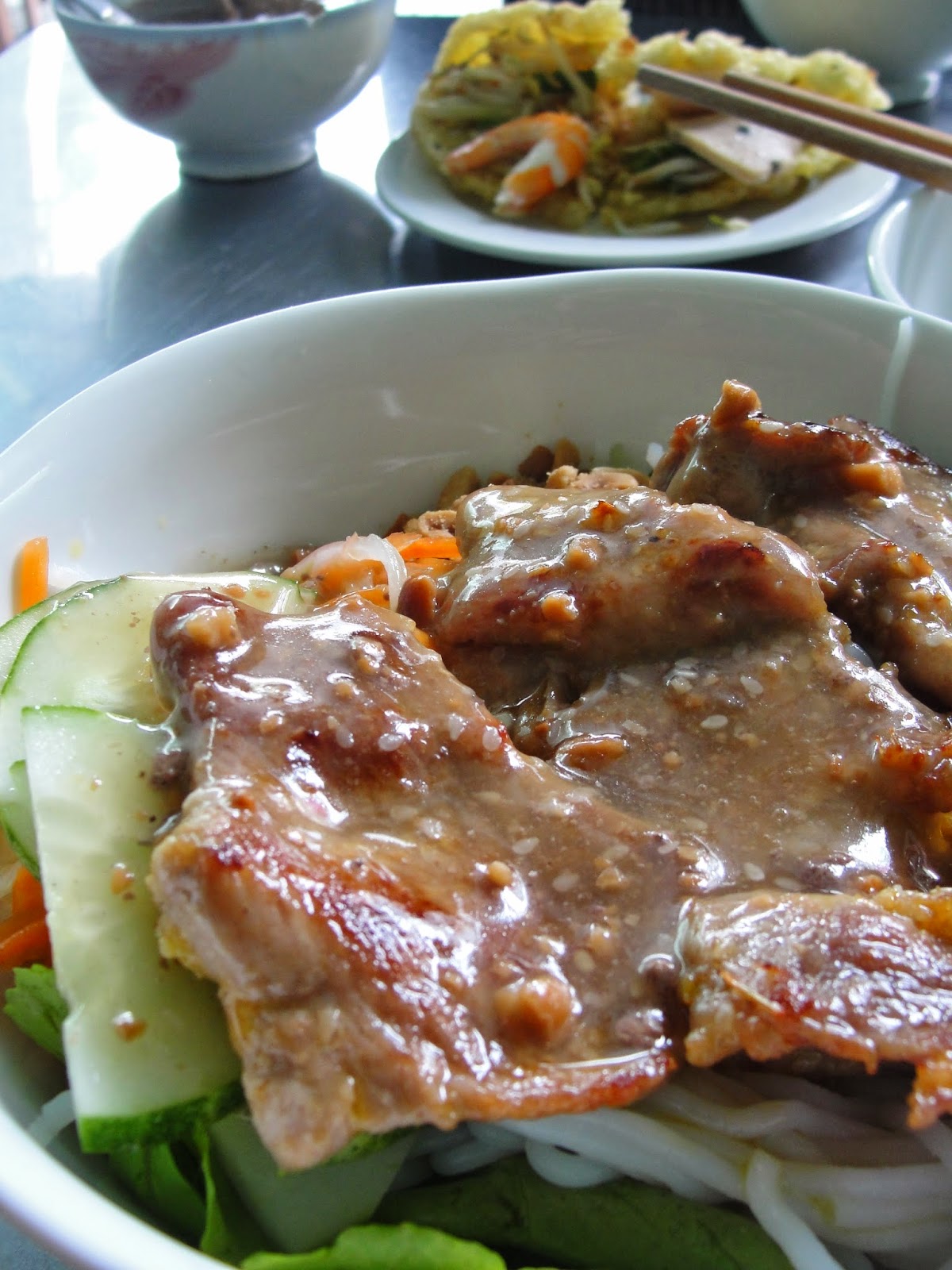 bun cha it was not

Lodging notes: a few weeks before she arrived, Kim sent an email asking if we could stay at the Jade Hotel. We were sold at "one less decision to make" and we totally loved it! Our room was small but very comfortable and included a tea kettle and free coffee. But the best part was the service - the staff were all super nice, always offering free juice or coffee and scented cold washcloths whenever we returned from a hot day of exploring. Totally, completely, absolutely spoiled.

Huế was a great way to end our Vietnam extravaganza. No idea what Lao has in store, but it's got some really big shoes to fill... 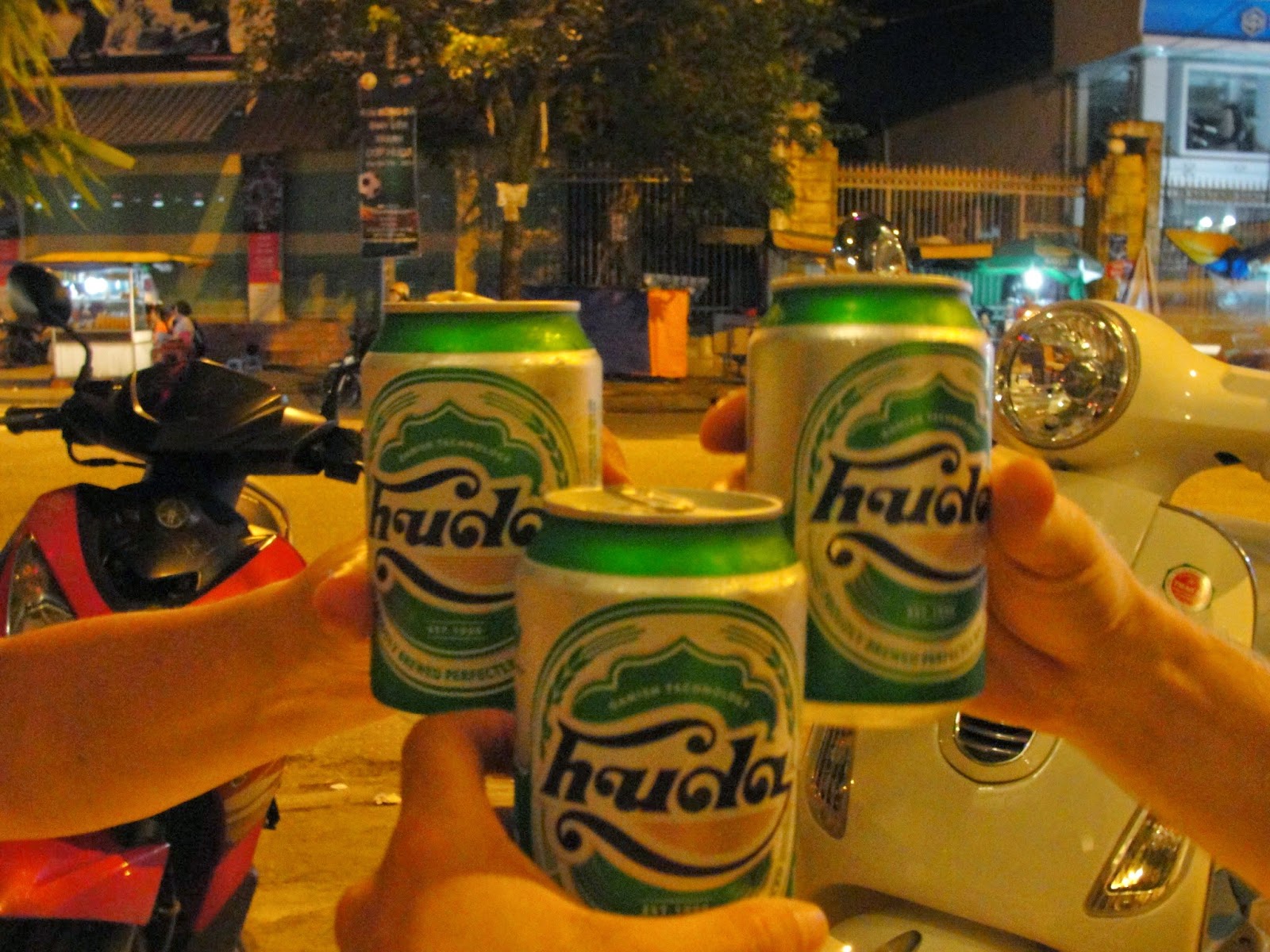