Our entry to Morocco started in Rabat.

Actually, that's not true. Our entry to Morocco started in Tangier, a place we'd been advised to get out of as soon as possible. Twenty minutes, one blue petit taxi, and 30 dirham (about $3.50) later we were at the Tangier train station with Rabat tickets in hand... Mission mostly accomplished!
While we waited for the train we watched the world's most fascinating but inefficient cleaning crew use half of Morocco's water supply to wash the station entryway tiles. Seriously, two hours of this: 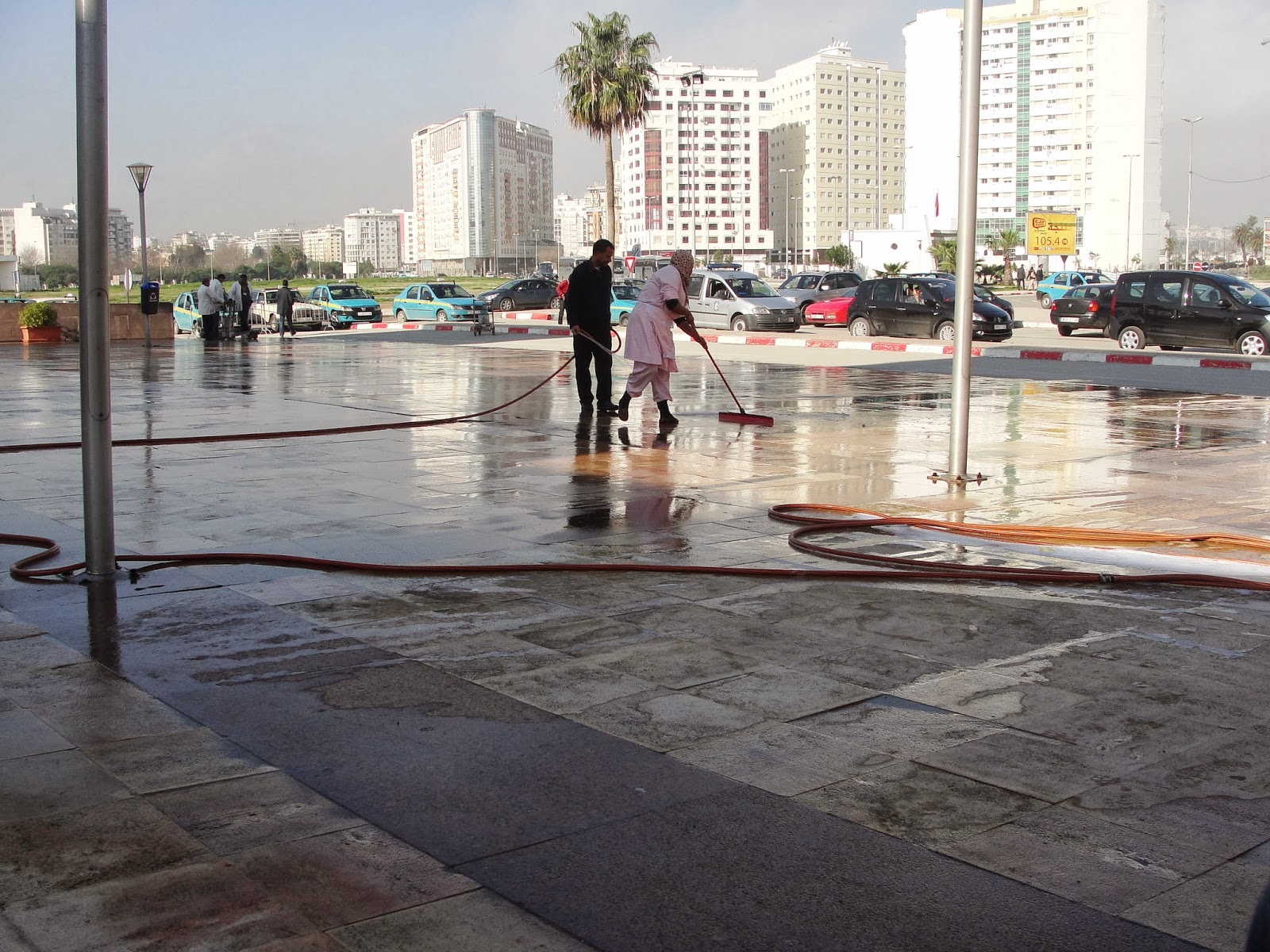 only sharing this story
because it's our only real
memory of Tangier
At one point Abdul the Architect came by to chat. He warmly welcomed us (he has a brother in Vancouver, don't you know?) and swore he could get us a riad in Fes for 100 dirham instead of the usual price of 1000 dirham. Riiiiiiight, and we've got a bridge Abdul might be interested in.
Finally, we were on our way to Rabat. (And by "finally" we mean "finally!!!" We had been vaguely talking about Morocco since last March, seriously talking about it since Turkey, and actually planning it since Porto. Finally!!! We were in Morocco!)
Since we weren't sure what to expect for our first Moroccan train ride we opted for "first class". First class isn't that much more expensive and guarantees you a seat (whereas in second class you hope for the best); you also only have six people per compartment compared to eight people in second class. And you sit with tourists and business travelers instead of regular folks... A few minutes into our first class ride, we decided to go second class for the rest of the trip.
But you don't care about all of this - back to Rabat!
We had arranged to meet up with a friend whose wife is working in Rabat. They graciously offered to host us, then even more graciously gave us their apartment keys, car keys, and adorable kitteh while they went on a last-minute work-related trip. 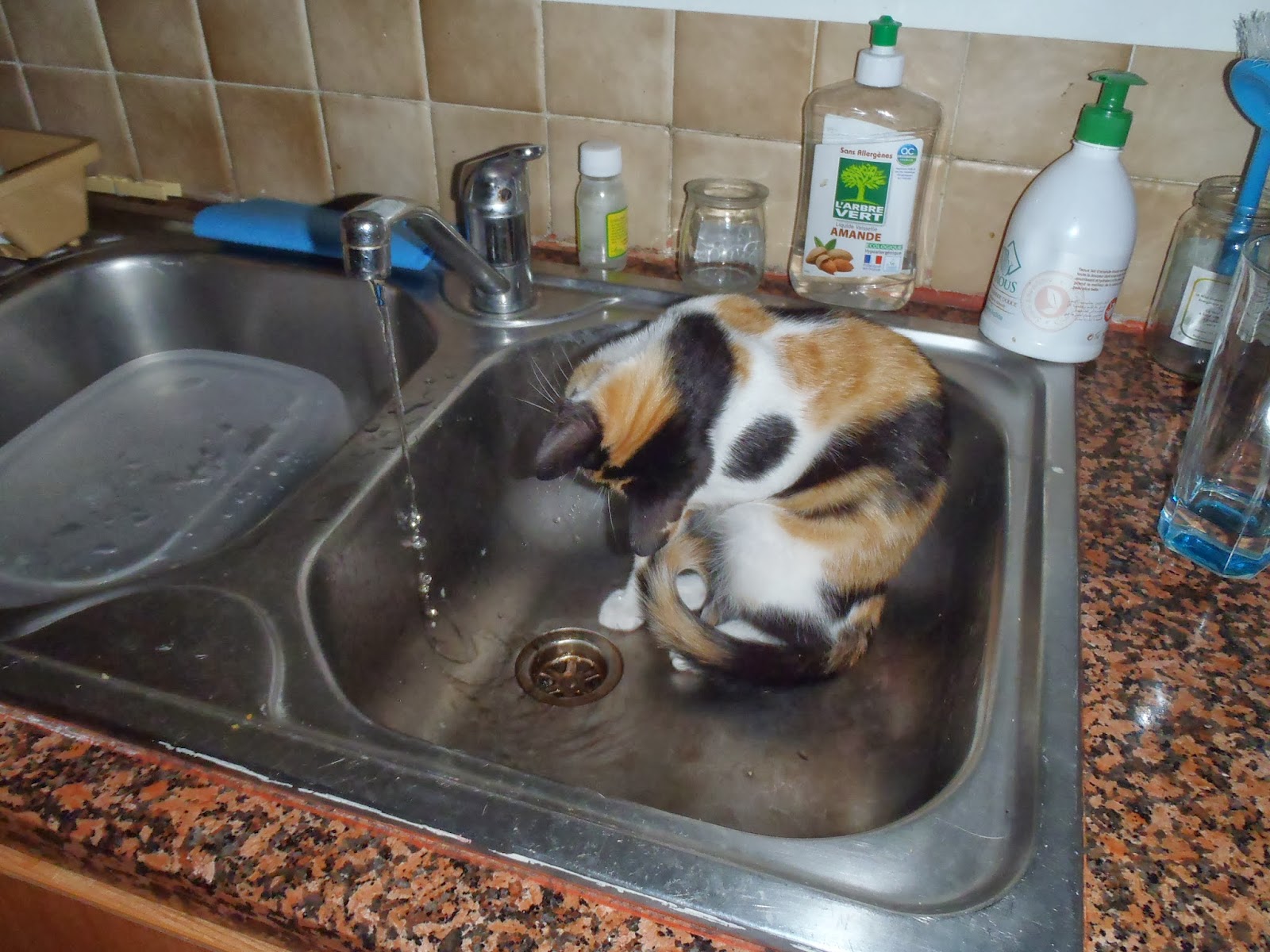 Beatrice must be an Aquarius
We ended up staying almost a week in Rabat. It was such an easy intro into Morocco - maybe too easy since we had our own place in the French part of town where there was a Carrefour market and no one seemed to care if we held hands in public, pulled our hair back, or wore short sleeved shirts.
(Eventually we would realize the low probability that anyone anywhere actually cared about any of those things. Although we are sure our attention to cultural norms was appreciated, all we really had to do was take care not to sit down in a men's tea shop and we'd be okay.)
But we also stayed in Rabat because we liked it. The city is bright, white, and green. It's full of history, architecture, and art, and it has all of your modern conveniences.
You can find a lot if these modern conveniences in the medina, a maze of narrow carless streets where shopkeepers sell absolutely anything you could imagine (live chickens, pirated DVDs, bulk spices, electronics, freshly butchered meats, clothing, beautiful pastries and produce, you name it - there's a running joke that if you need something, everyone "knows a guy in the medina..."). The streets buzz with a constant hustle and bustle of shoppers and scooters and sometimes donkeys throughout the day, with only a brief pause for a siesta in the afternoons.
But medinas are also residential and above many shops you find someone's home. It's been like this for eons... Only now the homes have running water and electricity. I imagine medinas are kind of like the boroughs of NYC without the hefty price tags and with a lot more donkeys.
Rabat was our first medina experience, and surprisingly it was probably our favorite. 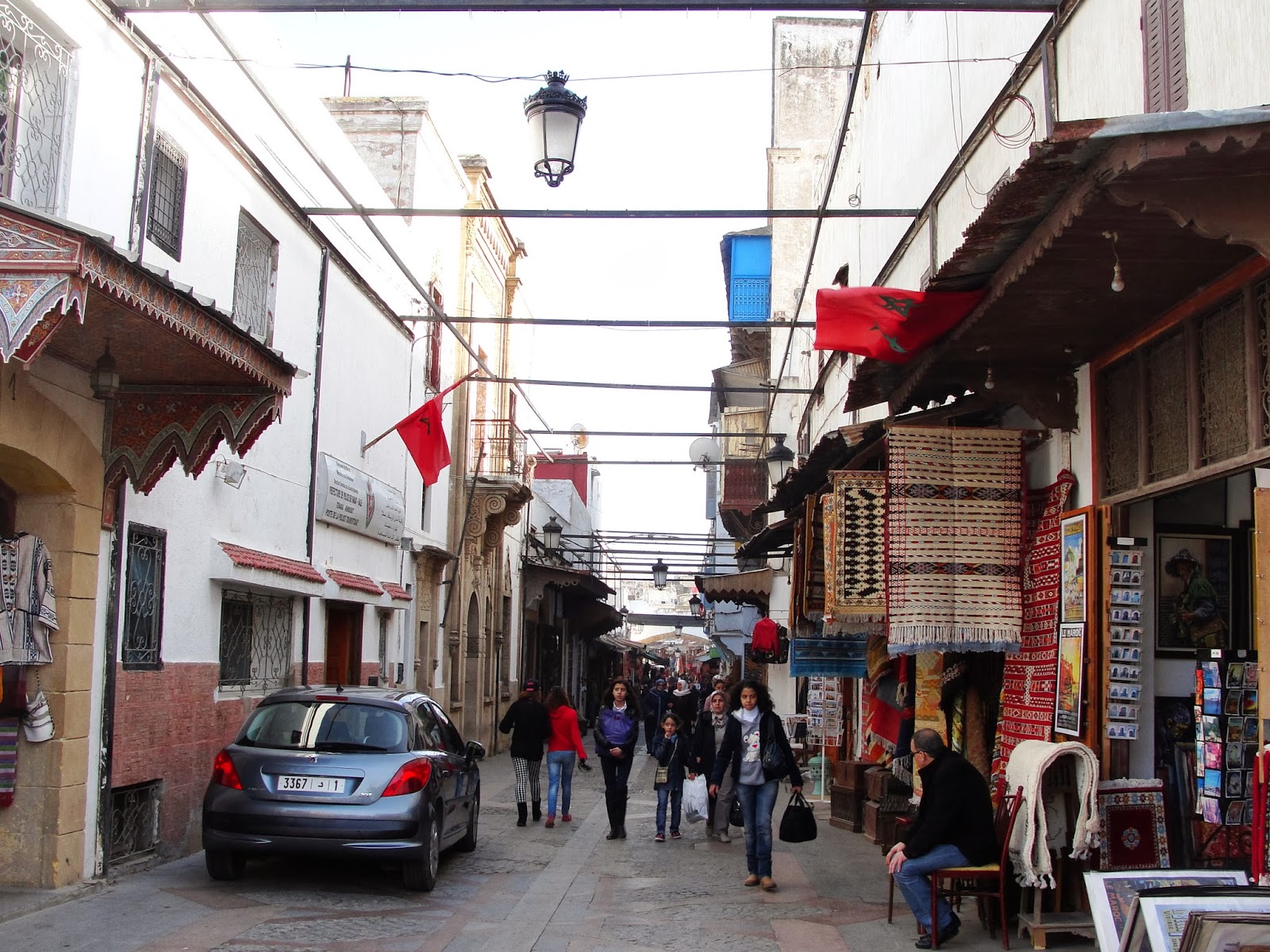 not technically the medina
hence the car
but this is the gist
The medina was our first stop on "explore day" (AKA leave the apartment so our kind hosts could pack for their trip). We had fun getting a little lost in the maze, then we walked toward the shore and stumbled upon an amazing cemetery. 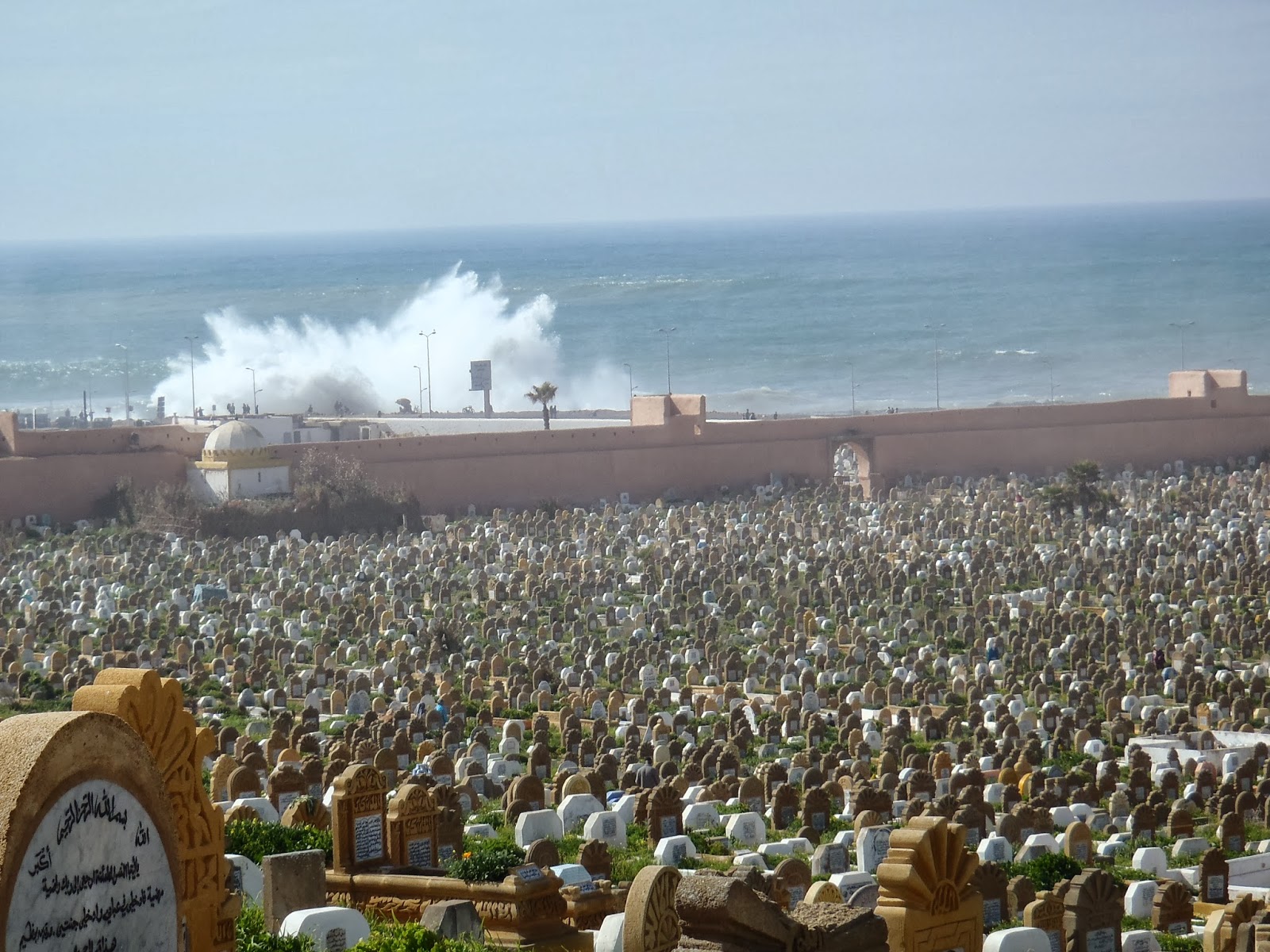 in hindsight, not sure we should have been here
but what a view
The ocean waves were crazy that day and we spent some time taking pictures of the ginormous bursts of spray. Lots of locals were doing the same thing. It was neat. 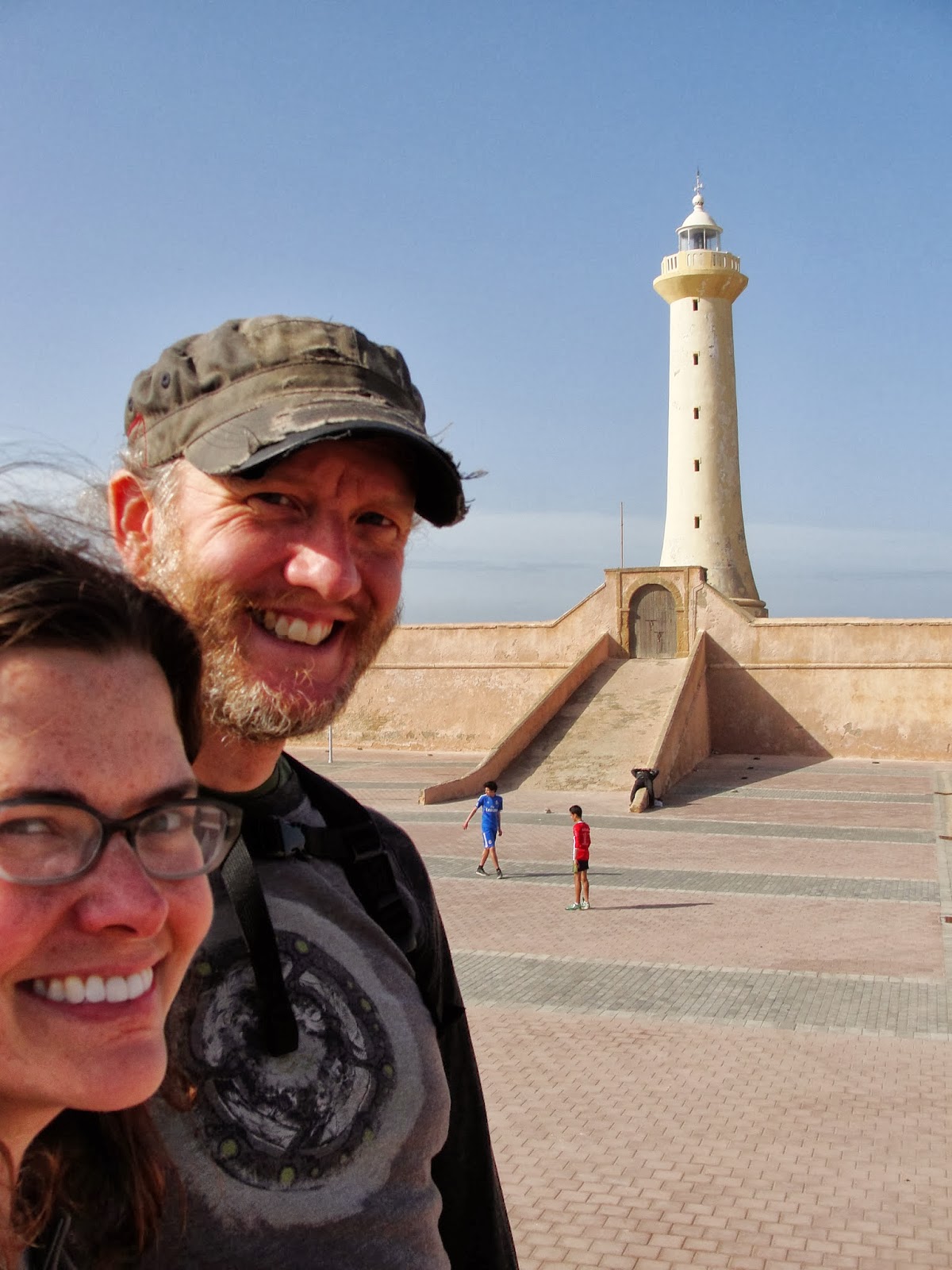 along the beach we found a lighthouse
(AKA Oregon nerd shot)
Next up was Kasbah of the Udayas, our first kasbah, once a fortress or an ancient medina (or both depending on the city) and now a residential area along beautifully decorated, narrow carless streets. all lost in the supermarket -
oh wait, wrong song 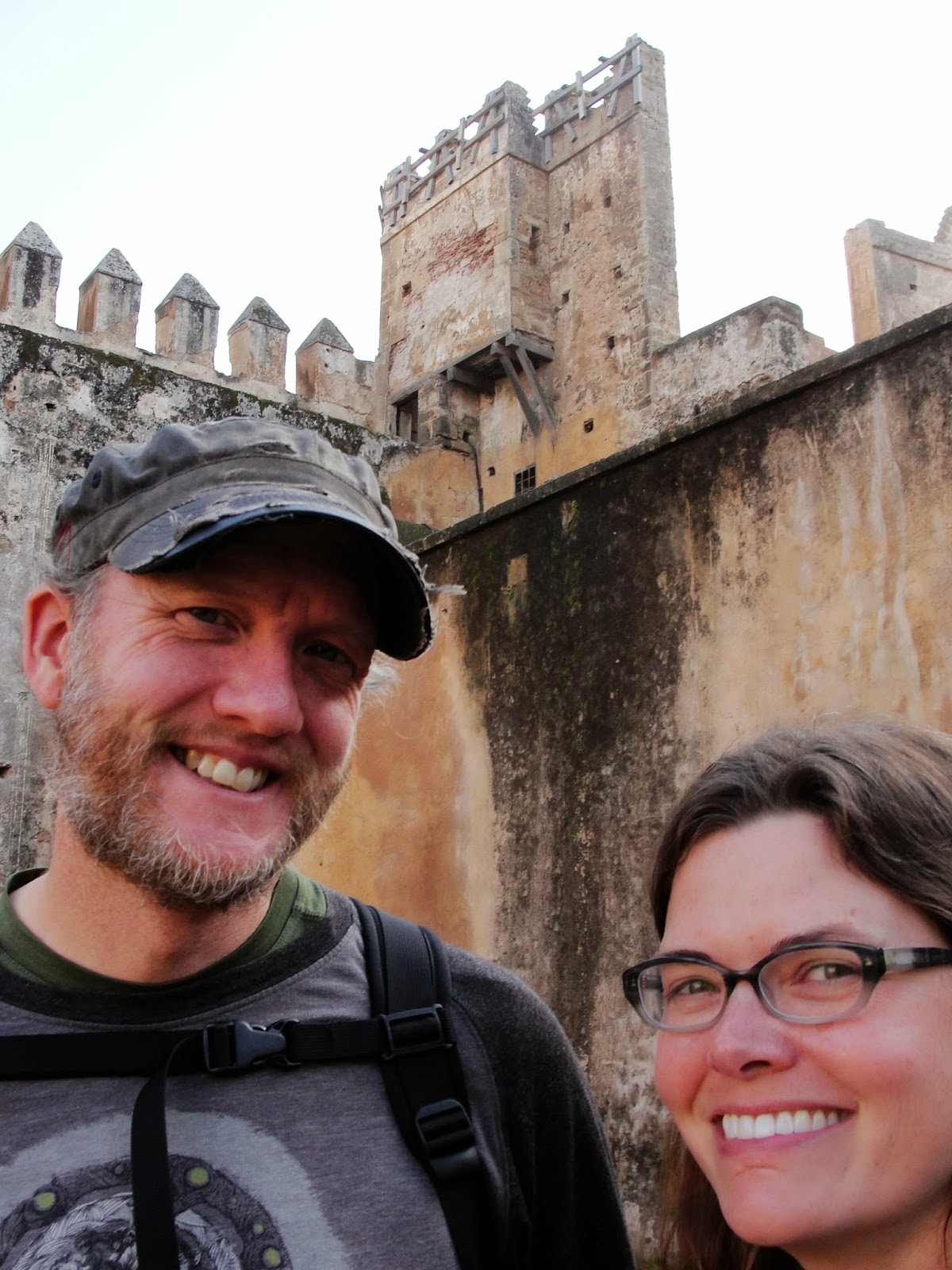 rockin' the Kasbah
The Kasbah had a pretty garden and a nice spot for tourists to stop and enjoy tea and almond pastries. So we did. And then we wandered back to the apartment and made dinner... Couscous, natch!
We knocked out the big tourist attractions on "explore day" so the rest of our time in Rabat was pretty low-key. Some might even call it lazy. But that was OK. We did lots of laundry, eating in, research, and planning.
And there was that silly kitteh to entertain. 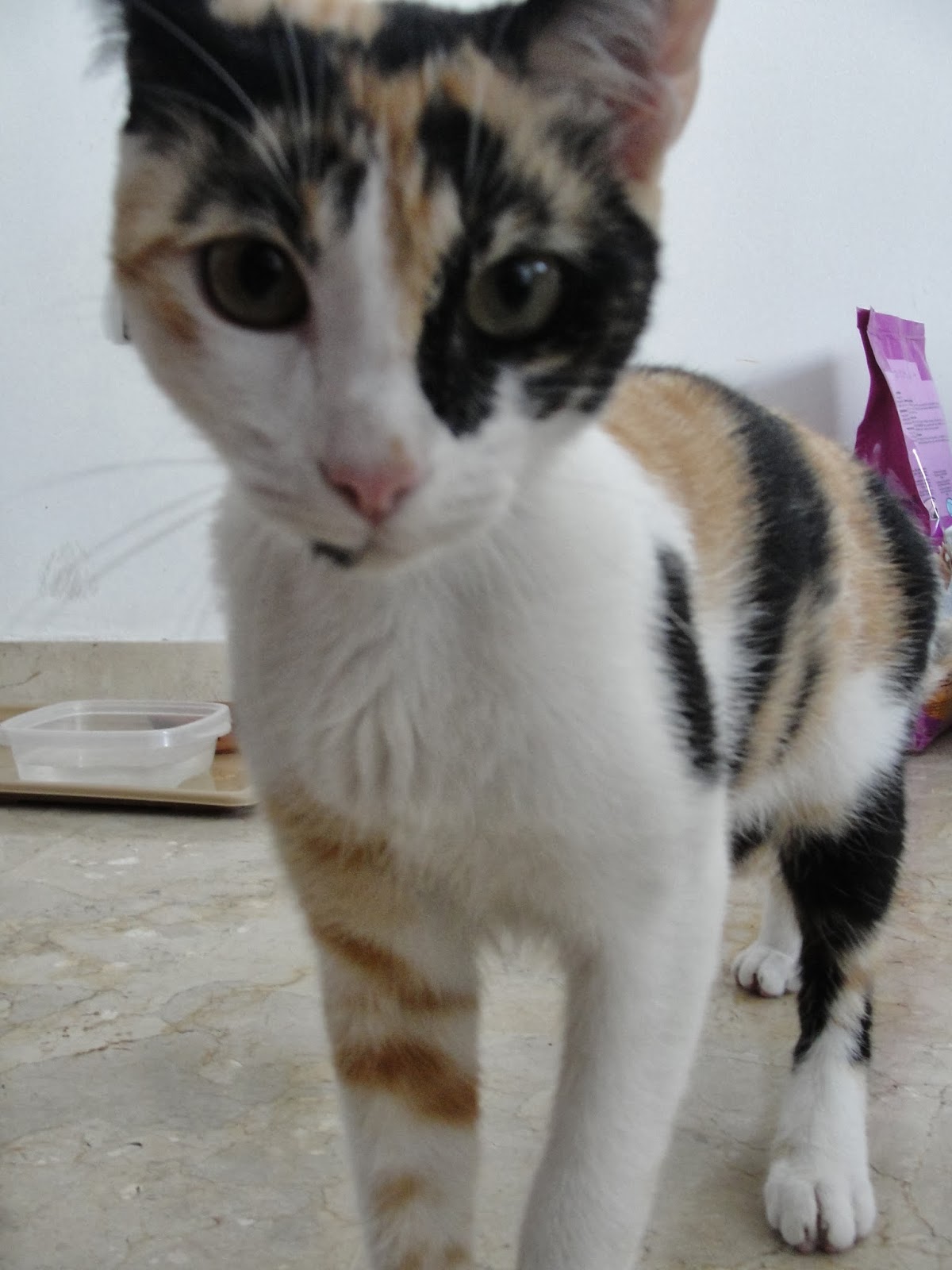 play now?
how about now?
... now?
But we got around a bit too. Our hosts had offered tickets to a traditional Japanese musical performance at the National Library, and we opted to attend the afternoon performance with some local elementary students instead of the (probably stuffier) evening performance the night before. 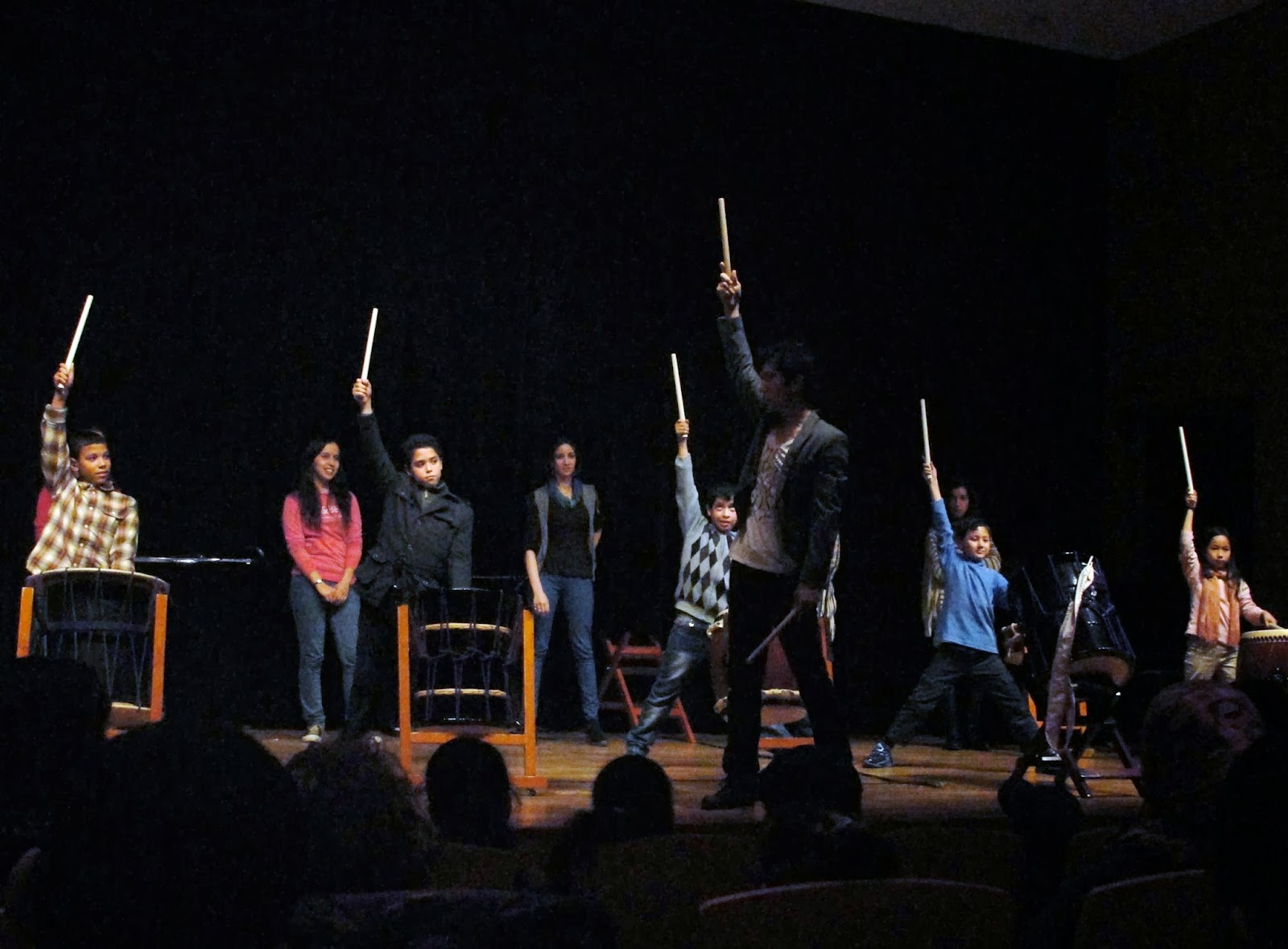 think we made the right choice -
the stuffy evening show probably
didn't feature audience participation
Definitely didn't expect to learn about traditional Japanese music in Morocco! The school kids were pretty adorable and put us to shame when they spoke to each other in Arabic, listened and replied to the emcee in French, and counted to ten in Japanese. Um... We know English. Sigh.
We visited the medina again and saw a great photography exhibit at the Villa des Arts. And despite Rabat's easy and inexpensive tram system, we walked a lot, enjoying the sights and the crazy traffic circles along the way. 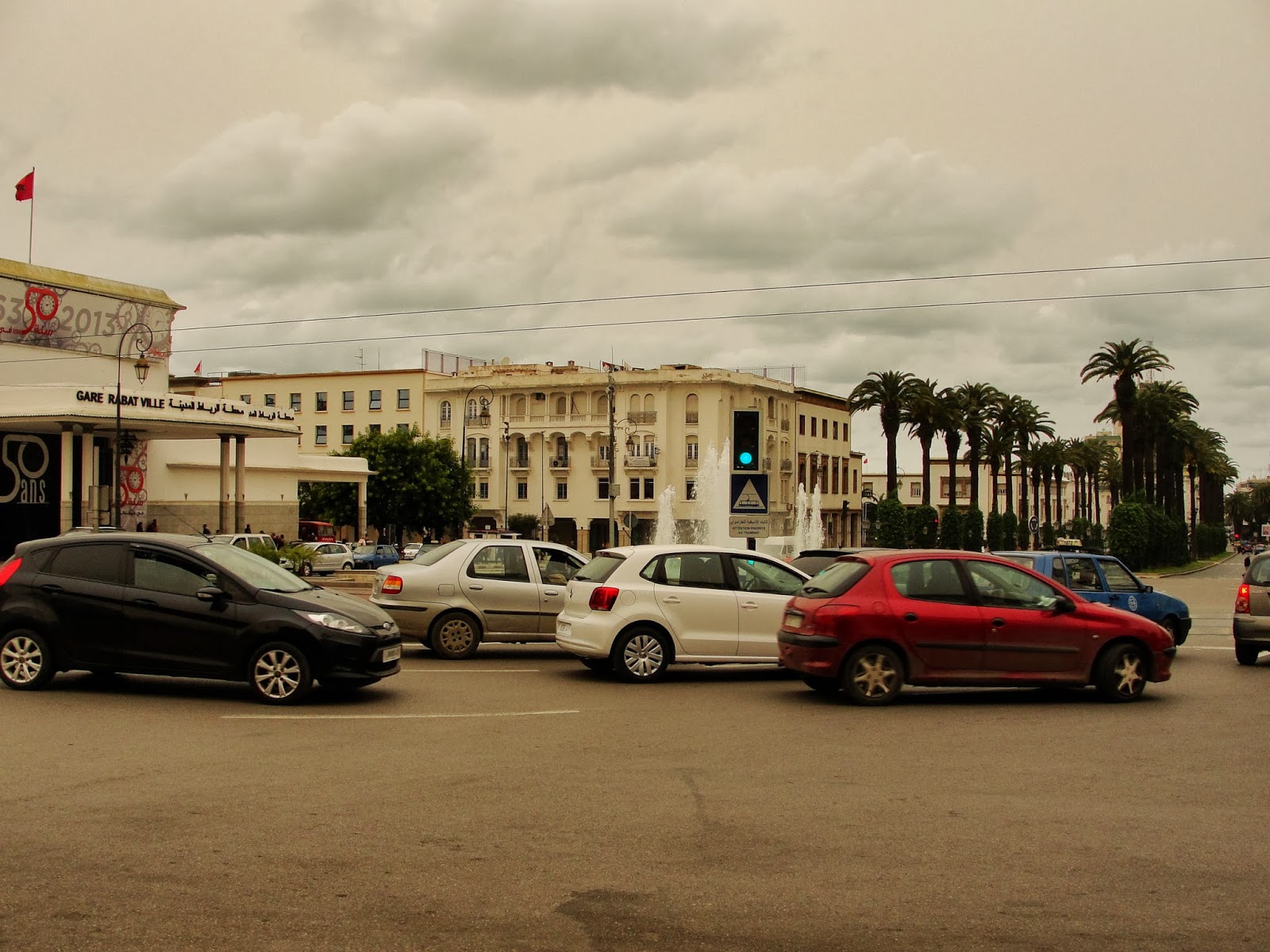 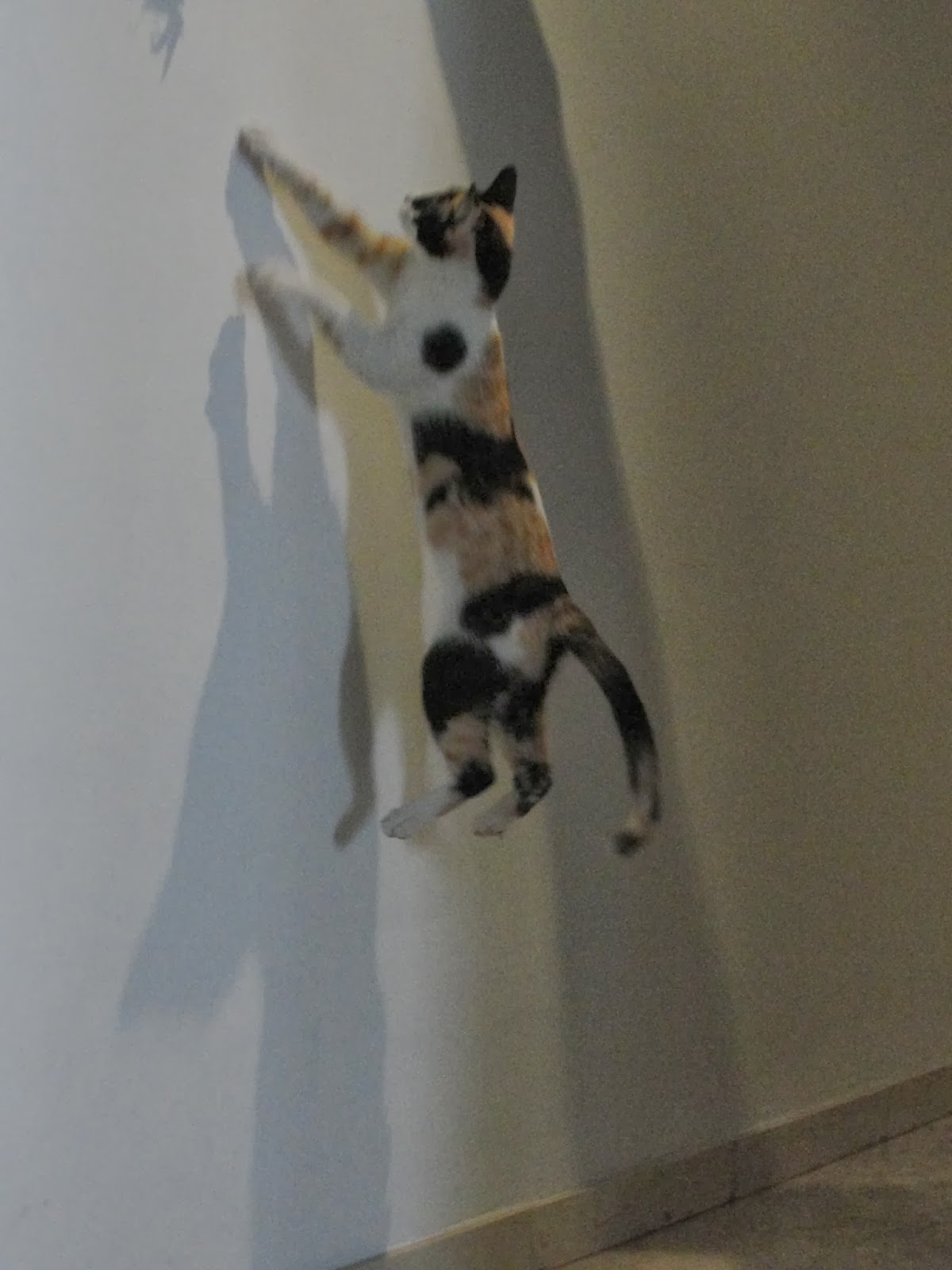 she believes she can flyyyyyy
We were curious about Casablanca but not curious enough to plan a long trip around it - it's the economic capital of Morocco but not a tourist destination. Since it's just an hour from Rabat we day-tripped from there. In our brief four hours we saw... 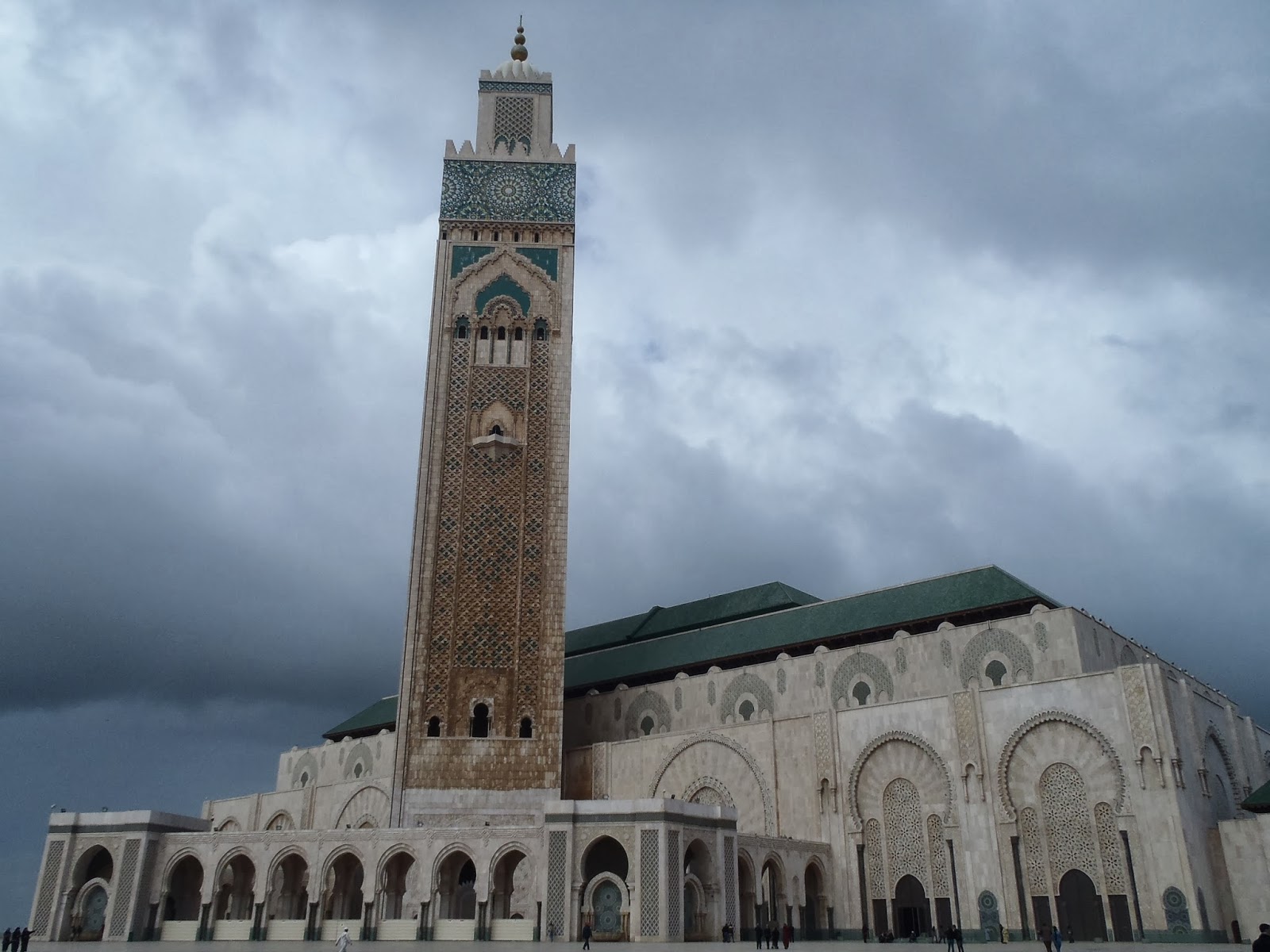 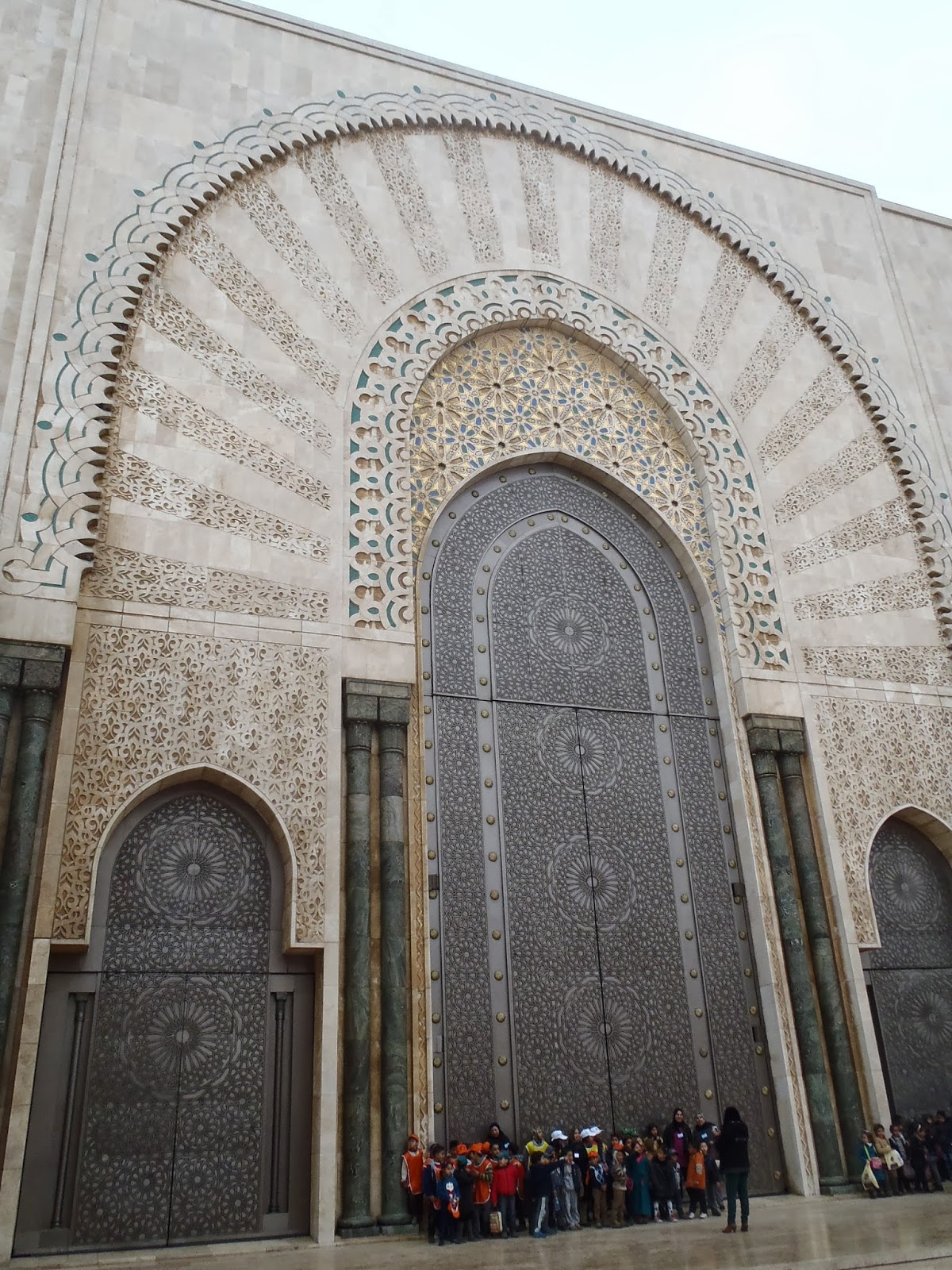 and its ginormous doors
We huddled near the mosque during a short rainstorm. Jen had a very bizarre experience in the mosque's public toilet that would set the tone for the next week or so ("salaam, public toilet attendant lady - I know how to close the door shukran, I know how to wash my hands shukran, la shukran I don't want a photo with you in the public toilet, la shukran I don't need you to comb my hair with your fingers, please don't give me a dirty look when I offer you what I think is a fair donation - shukran"). Later we would be escorted by a local (he's been to Washington, don't you know?) to an 'artisan co-op' ("only open on Tuesdays!" riiiiiight) to look at rugs and spices. We couldn't escape but they kindly took "la shukran" for an answer... eventually. And at the end of the day a friendly guy chatted with us for a few minutes as we walked back to the train station but it turned out he only wanted money. And so it began.
ANYWAY. The Casablanca section of Lonely Planet lays out an art deco walking tour. We know nothing about art deco and figured this was a pretty appropriate place to get familiar with the style. Our first stop was Eglise Sacré-Cœur de Casablanca, a beautiful former cathedral turned cultural center with amazing panoramas from the tower. 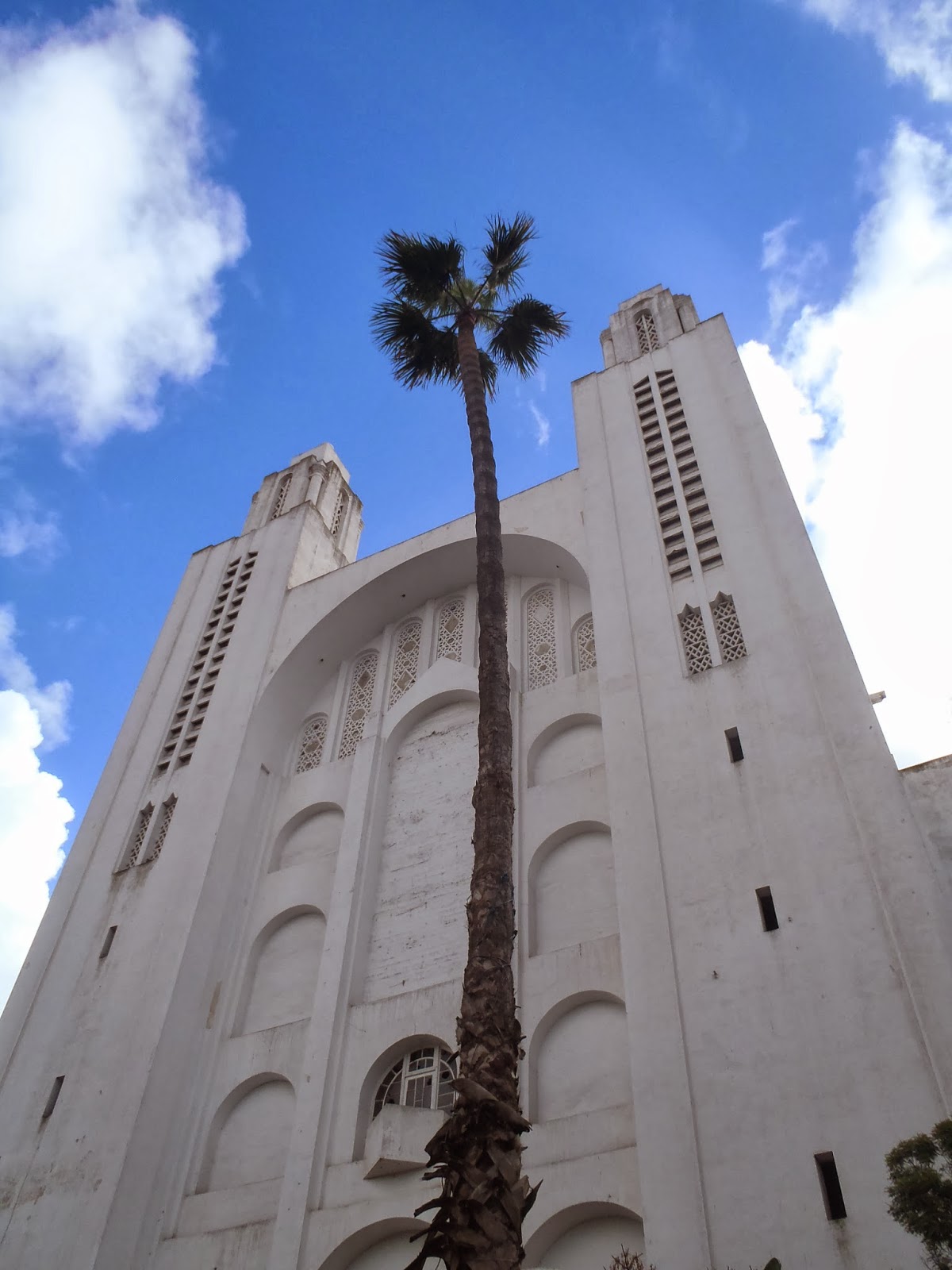 cathedral from the outside 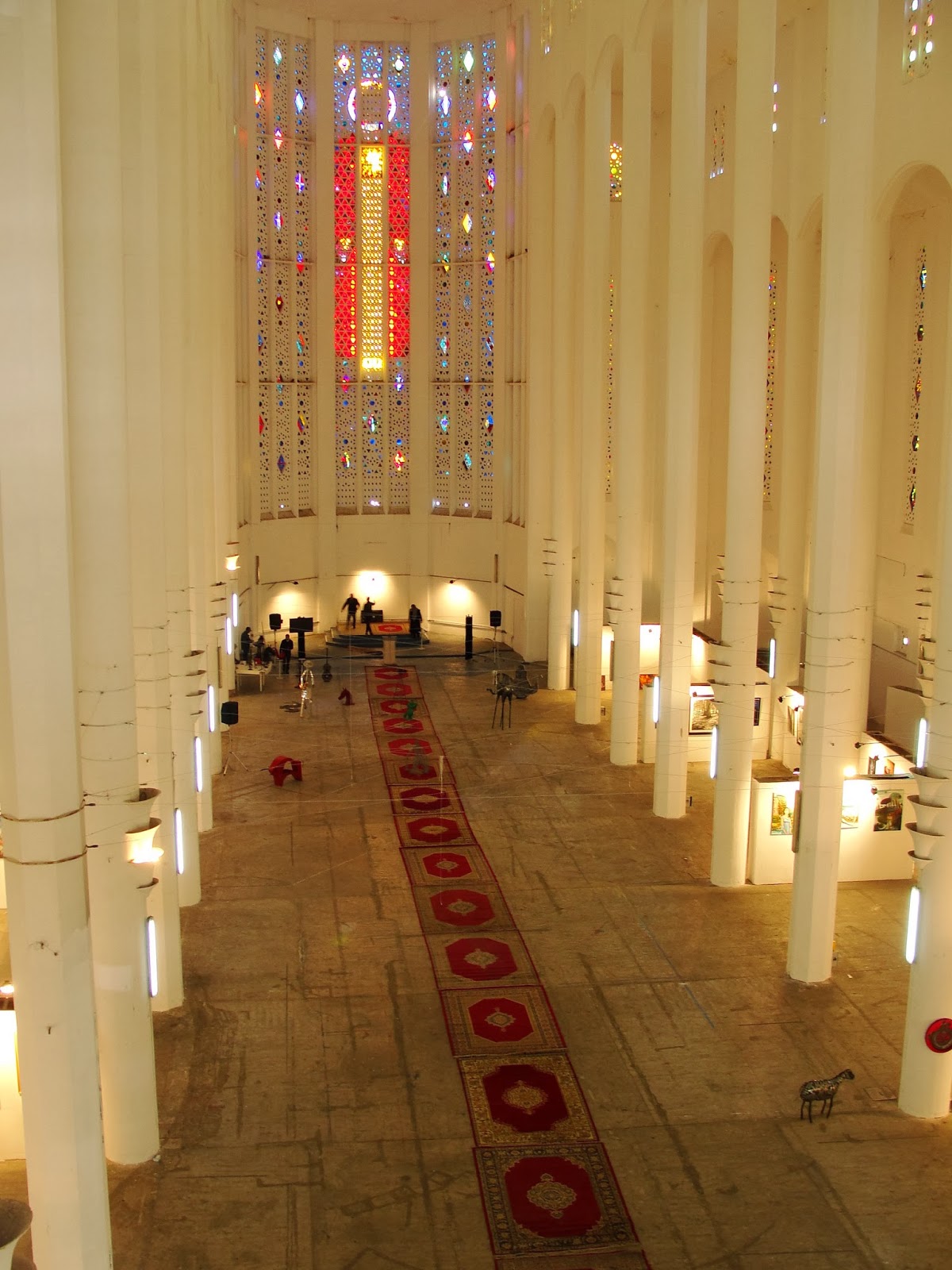 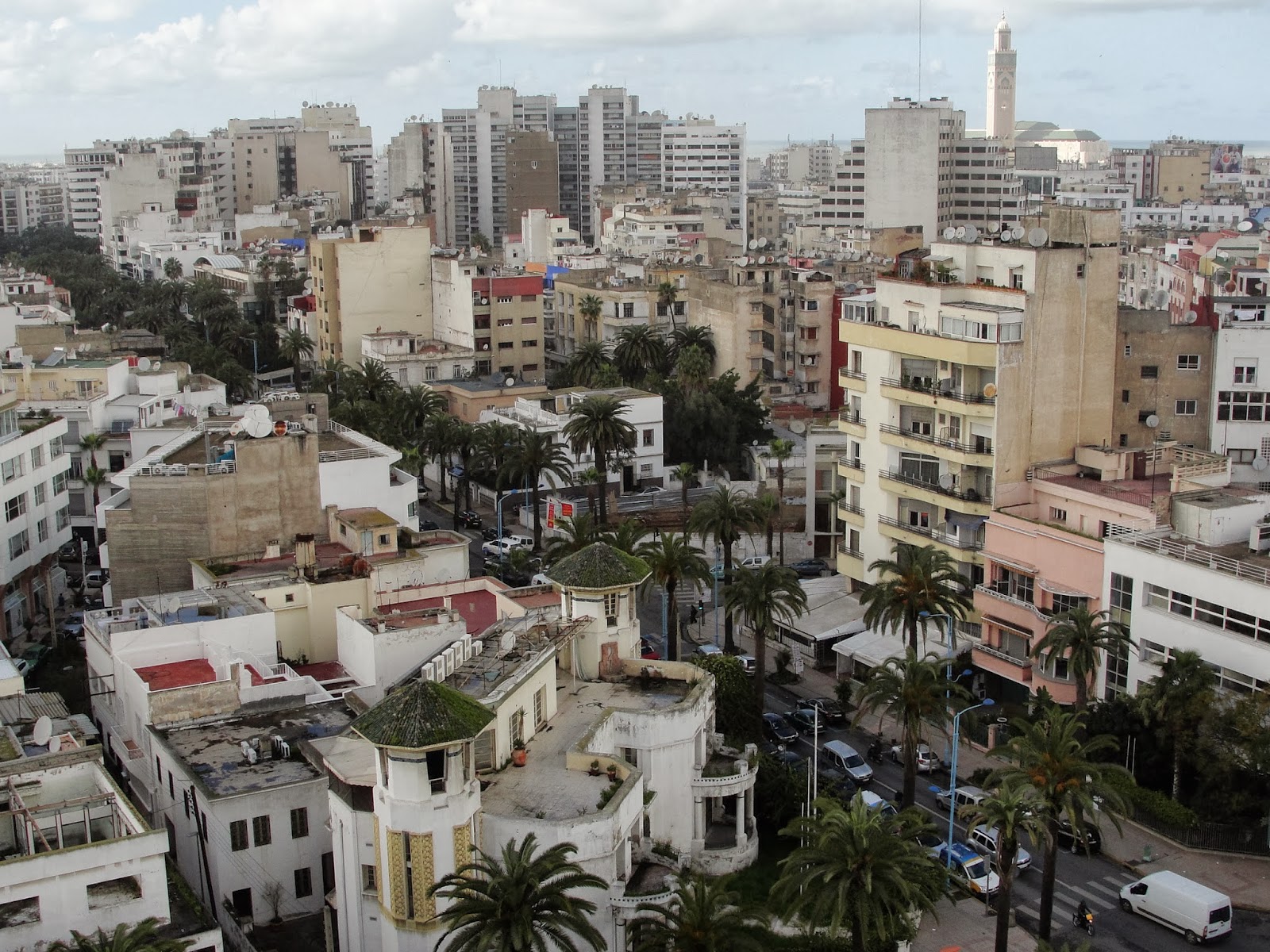 Casablanca from the cathedral tower
The cathedral was our favorite spot during our four whopping hours in the city. The panoramas from the tower were stunning and the modern art exhibits inside were pretty amazing too.
From there we continued our art deco education... Actually we just took pictures of the buildings listed in the walking tour. 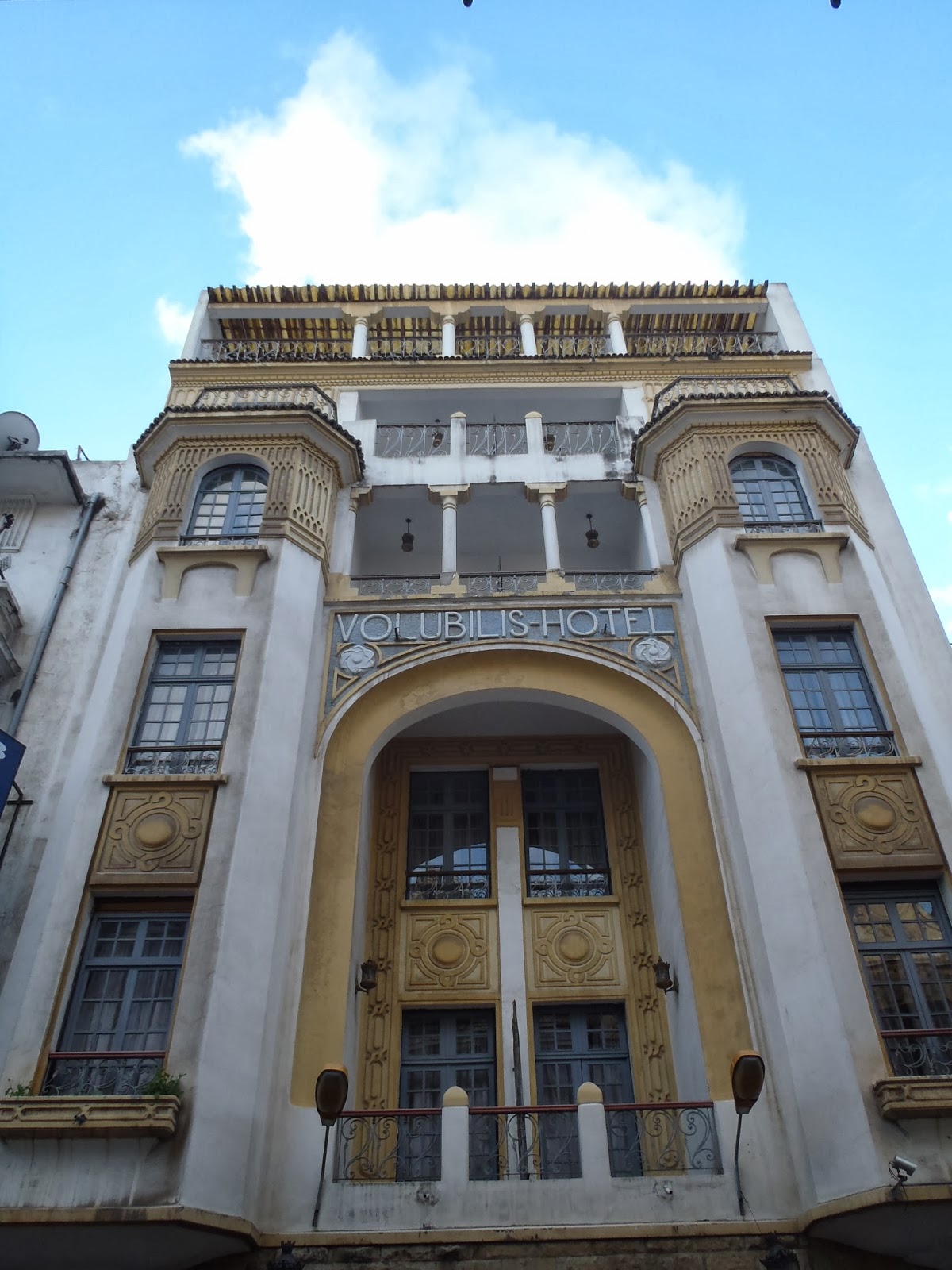 we still don't really get art deco
but we're OK with that
Food notes: there is a whole post dedicated to Moroccan food coming soon.
Lodging notes: Chez Beatrice - great location, excellent kitchen and laundry facilities, and the price ($0) was just right.
And after a week in Rabat we were ready for Marrakech... or so we thought!
Posted by Slowly Global
Email ThisBlogThis!Share to TwitterShare to FacebookShare to Pinterest
Labels: africa, morocco