When in Lisa, Romania...

After a few days in Brasov enjoying amazing fall weather, Bran Castle, and the amazing Kismet Dao hostel, we headed south to Bucharest. We knew we wanted to see the countryside of Romania during our visit so while we were in Budapest we reached out to Deborah, a former Canadian who moved back to her husband's home country with their family to open a B&B. With the profits they plan to start "an organic farm to offer financial support to the needs of a pay-as-you-can center for the elderly" in Lisa, a small village about 50k west of Bucharest. Deborah said they could always use help so we signed up. 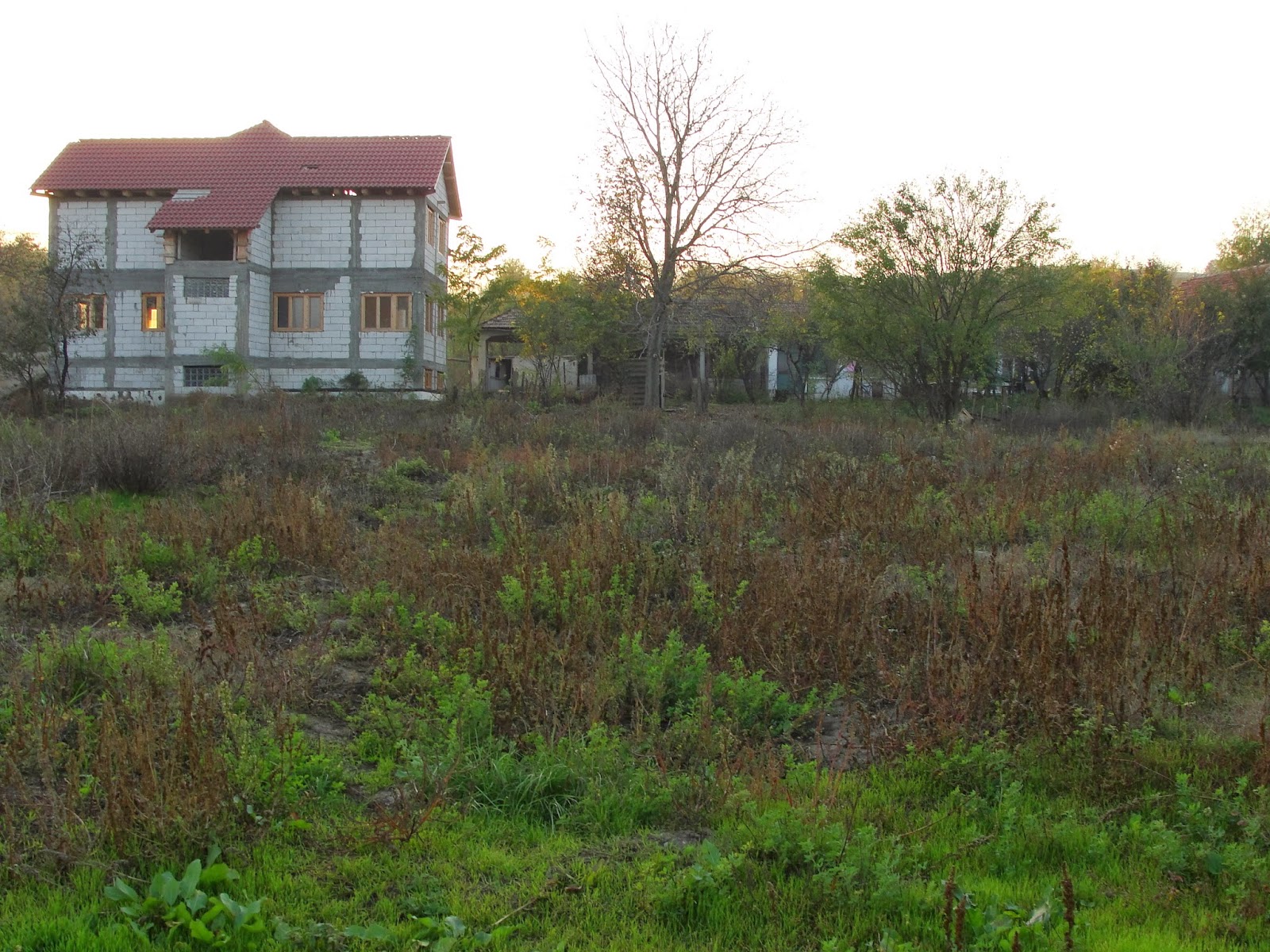 the future elder center and garden

Our Romanian volunteer experience was not quite what we expected but it was memorable nonetheless. The elderly have it rough in small villages, especially without family nearby, and Deborah's family's dream is impressive - housing, medical care and a self-sustaining community garden for a dozen or more elders in need of help. Because Deborah's family is funding this from their own pockets and with volunteer help, progress is slow... Even slower at the end of the season when we arrived. Work on the house and land had pretty much wrapped up when we got there so we spent some time planting onions for spring, extending the garden, clearing and burning leaves and brush, transplanting walnut trees, cleaning out the new house before it was closed up for the winter, and cutting/stacking firewood. 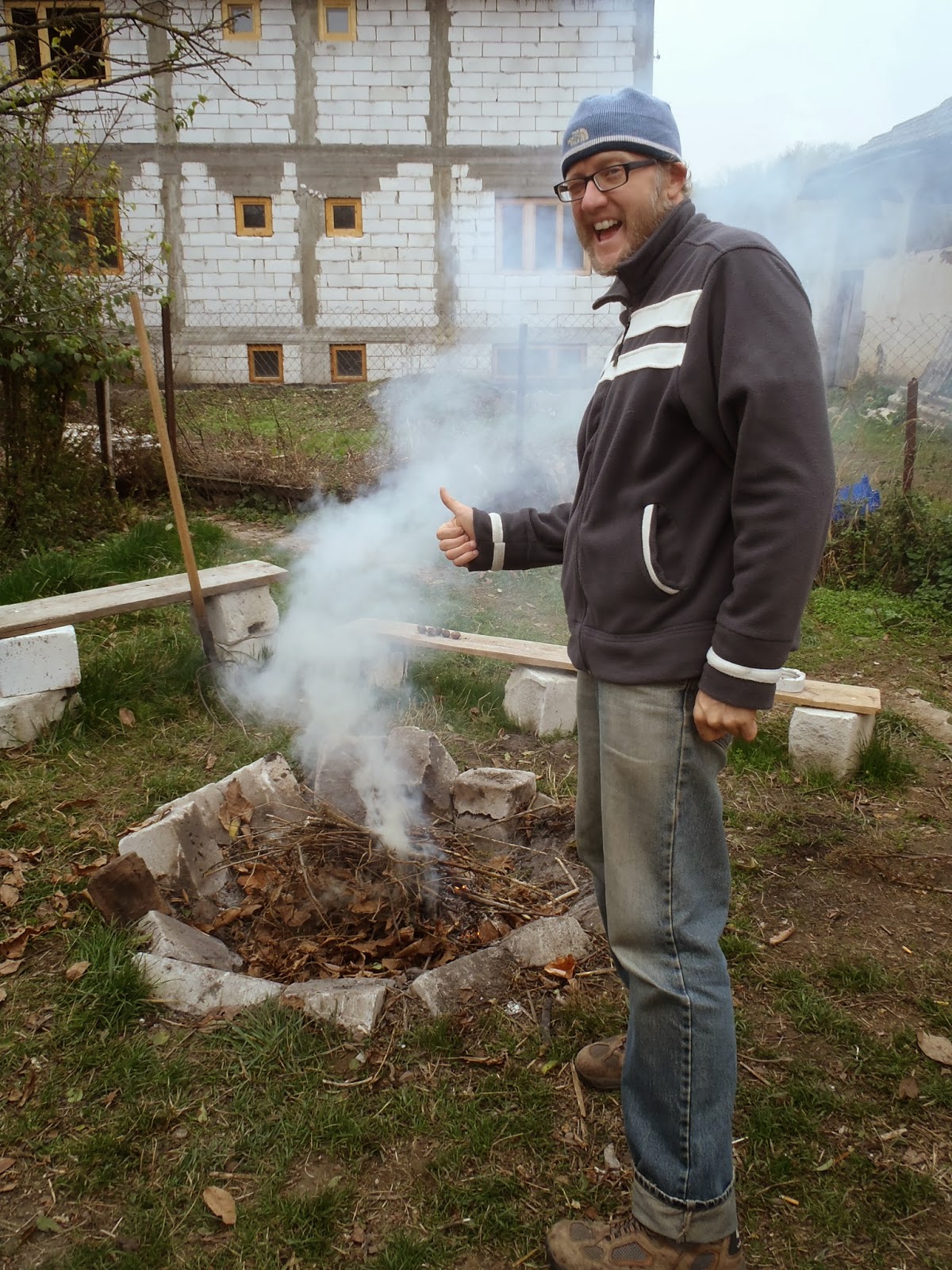 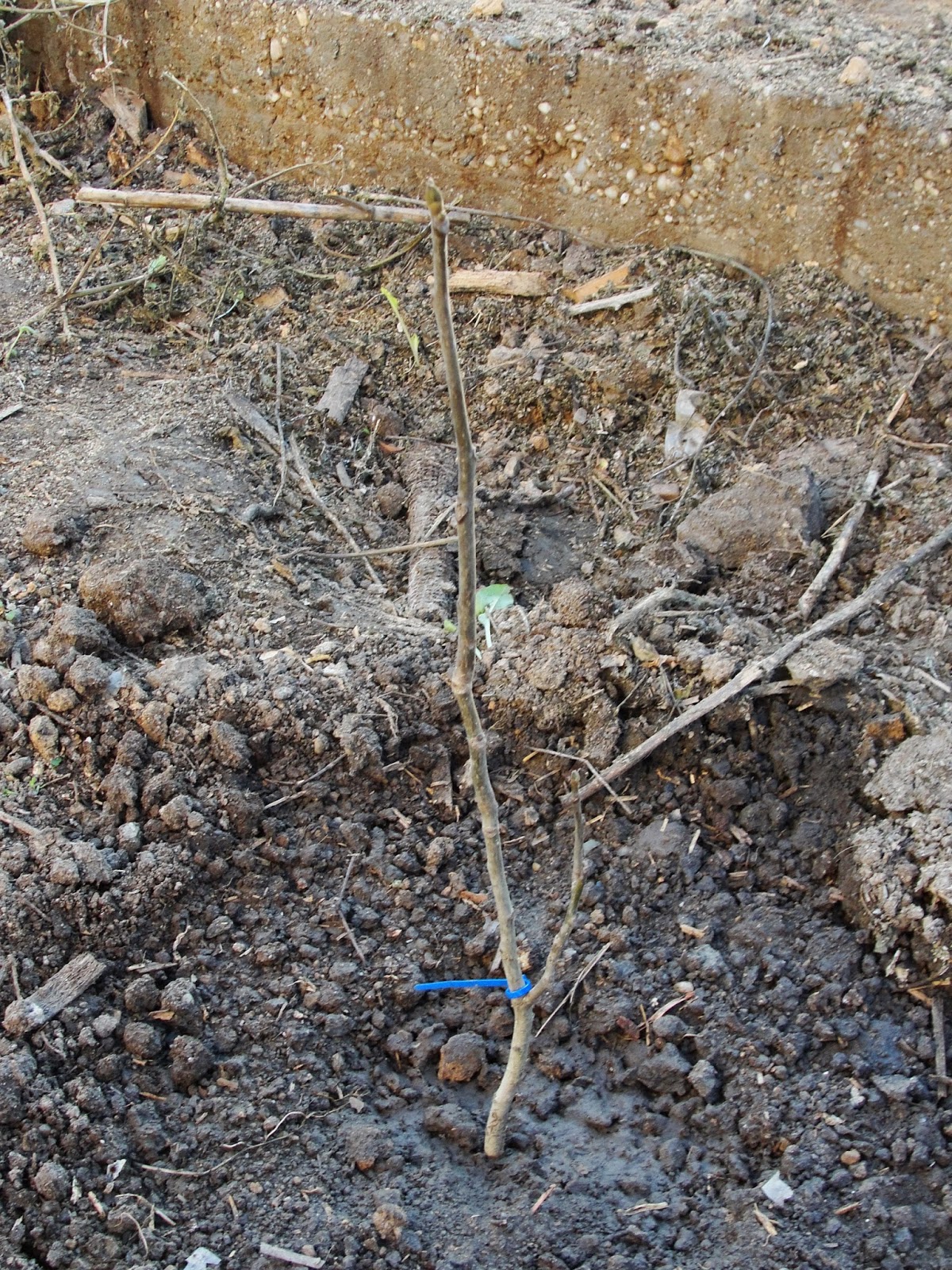 Otherwise, unfortunately, there wasn't much to do and not much room for improv projects given the late season. So after we finished our daily chores we read a lot, and sat a lot. Late into the first week we waffled a bit between heading back to Bucharest early to check out more of Romania or just enjoying some down time in a small village. Our flight to Istanbul was set for 11 November so we didn't have much time to play with, and with the tourist season ending and no reliable internet connection in Lisa we weren't sure what our options would be for transportation and lodging around the Black Sea or the Danube delta.  We opted to stay put, help out where we could, contribute to the local economy, and otherwise "just be" in Lisa.

(Some of you might imagine that this "just being" thing was quite difficult for Jen... Patrick will attest that it was definitely an interesting experience.) 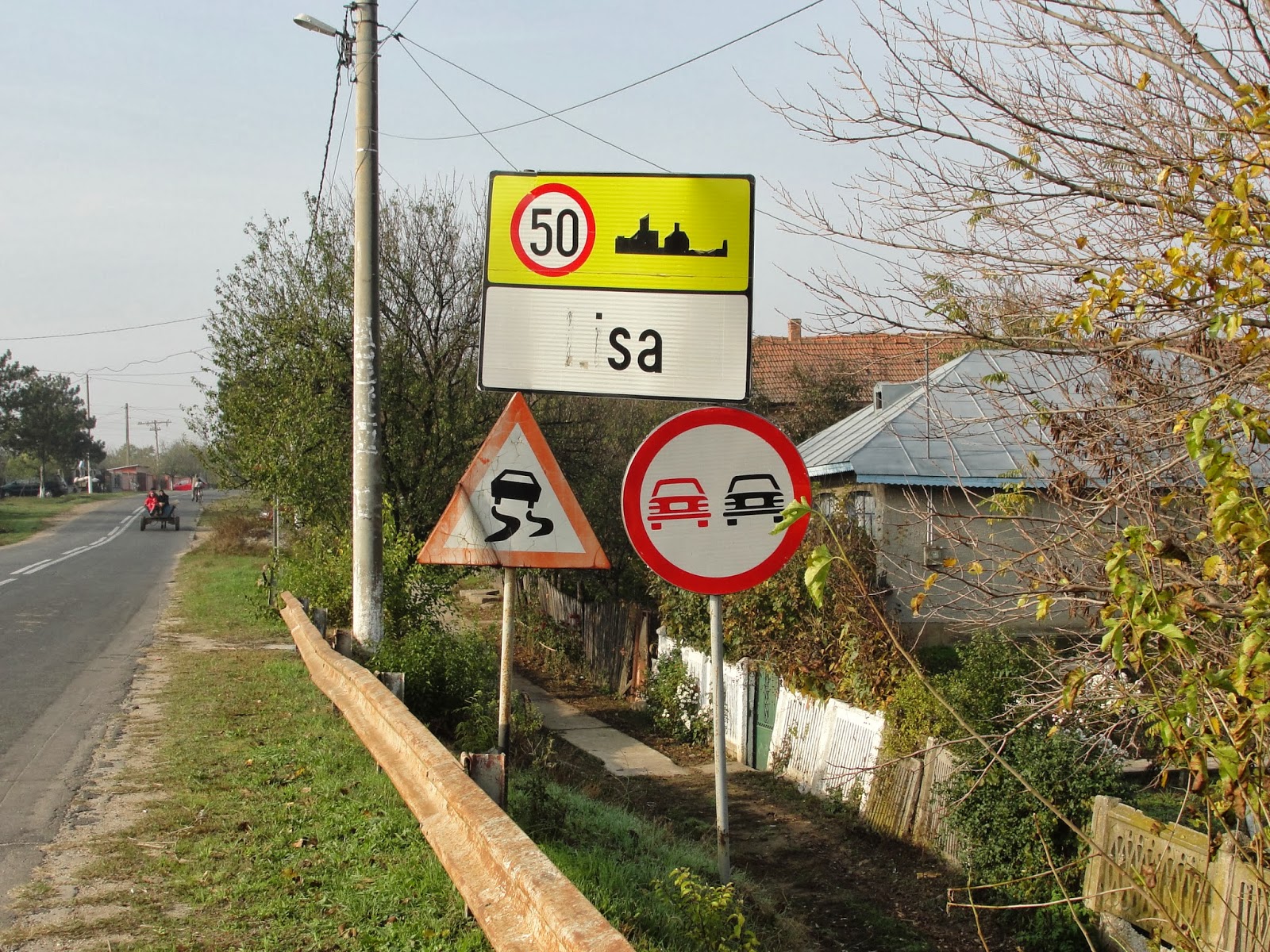 Lisa, Teleorman, Romania has about a thousand residents who live partway between old and new. Cars whip around donkeys pulling carts on the main road; satellite dishes adorn homes where just out back hundreds of ears of corn are stocked for winter and turkeys roam free; elderly gentlemen and women dressed just as you would expect Romanian villagers to dress intermix with youth in fashionable clothing on the streets; the town's four markets have all the modern conveniences but purchases are totaled on adding machines.

We learned a lot about Lisa and Romania in general from the local project manager. Among other things, the country has prospered better under democracy/capitalism than under its previous communist dictator. However, the future of its membership in the EU is unclear due to unresolved financial and security issues. As for Lisa, the main source of income is agriculture. We spent several afternoons wandering up dirt roads through beautiful fields either just harvested or just planted to germinate over the winter. Farmers would go by with their donkeys/horses and carts and nod hello. Sheep and goats wandered fence-less around the land. The morning fog hovered over the dirt roads... Every so often we would ask ourselves where in the world we were. 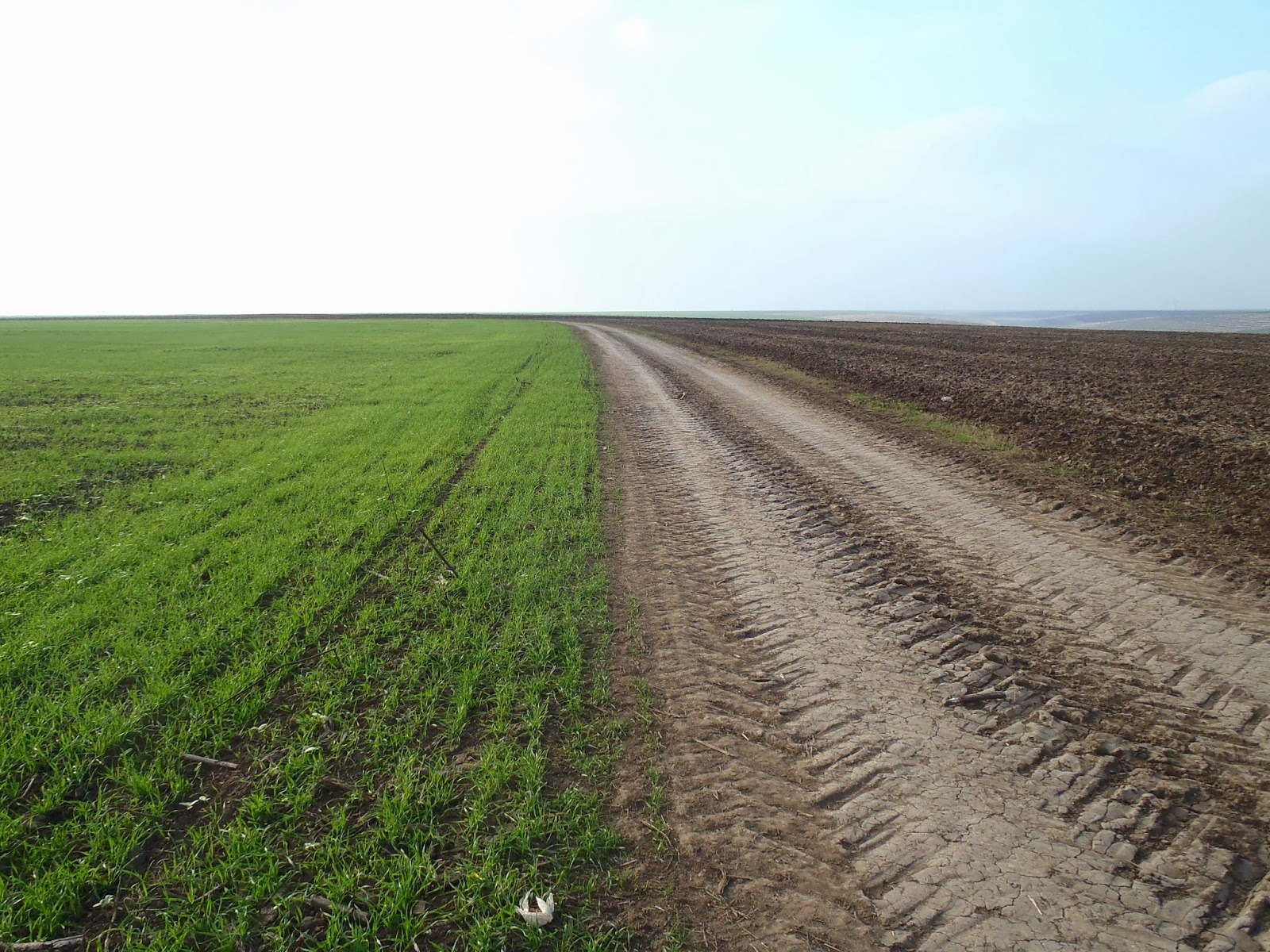 fields of gold
(and green and brown)

We explored the town streets where homes ranged from run-down to pristine (most were somewhere in between).  Loud gaggles of geese meandered down the roads, random dogs joined our adventures (well, joined farm dog Isi on her adventure), and the locals greeted us with a polite nod or friendly "bună ziua" ("good day"). Many of them would sit on benches in front of their house and chat with a neighbor or just watch the cars (or donkeys) pass.  It seemed that every house had a garden, and any self-respecting farmer would be incredibly jealous of the quality of the soil in this town. 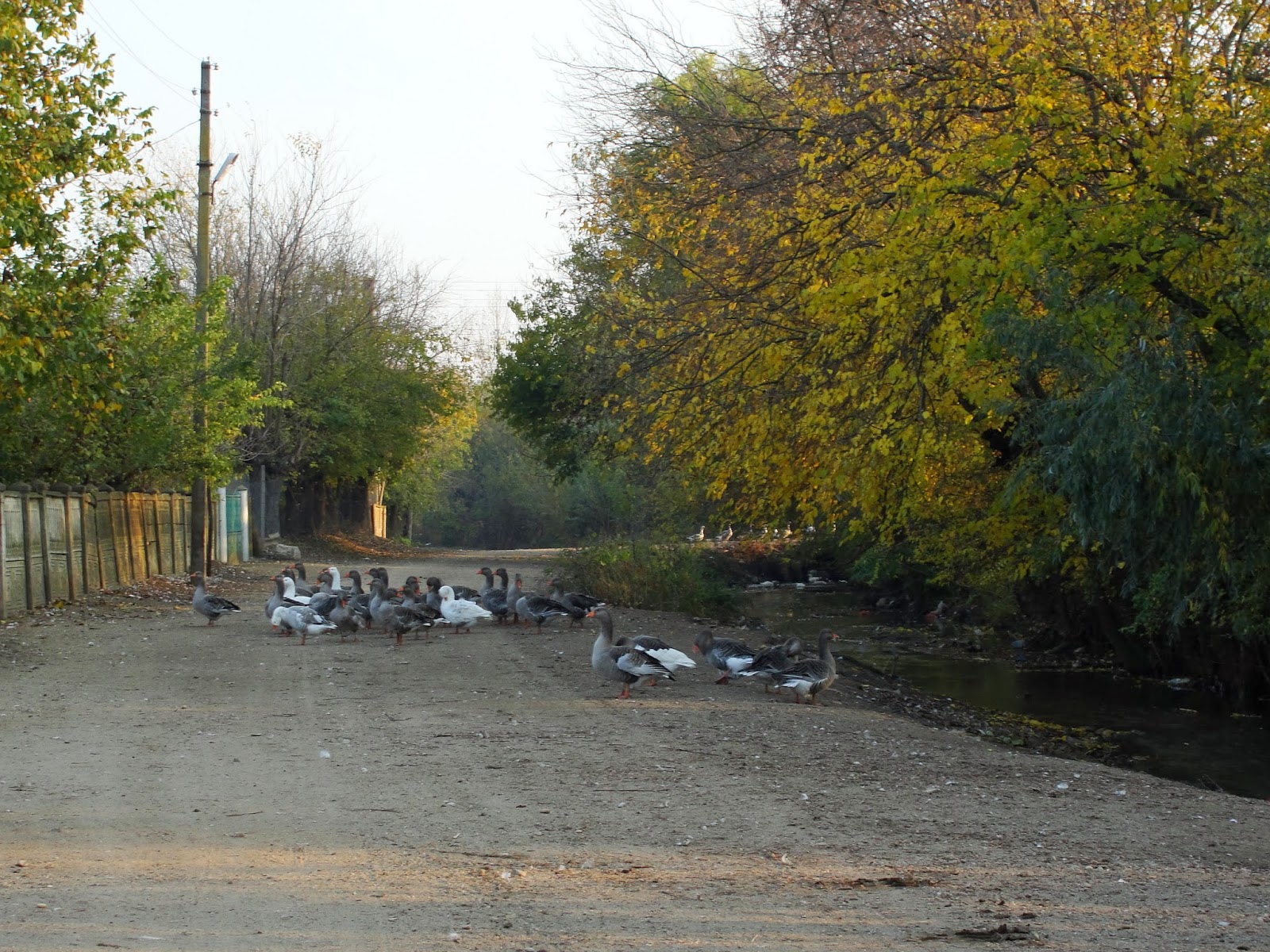 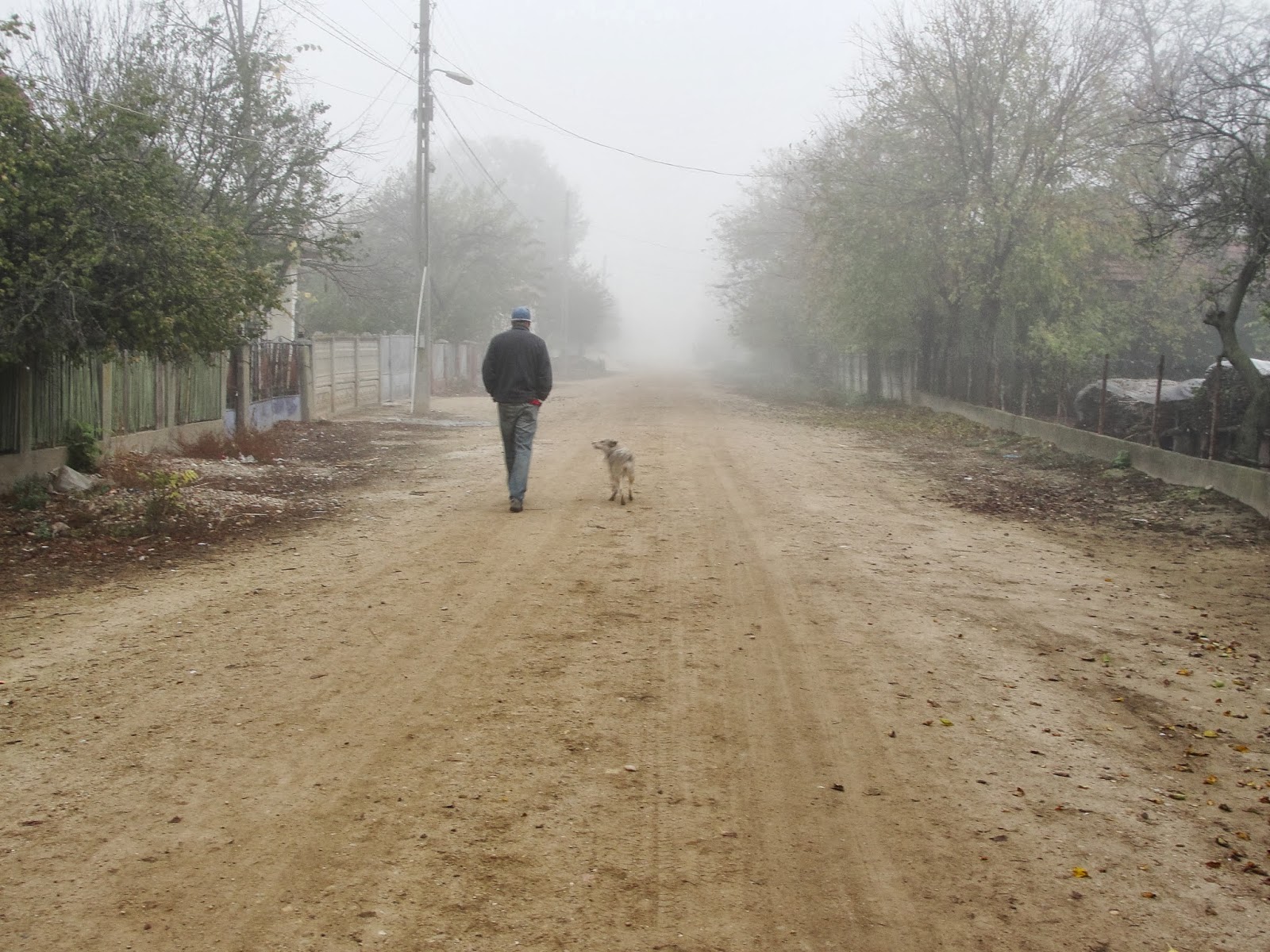 farm dog Isi enjoying a stroll with her new BFF

We also visited the Sunday market in Piatra (~2k east of Lisa) twice. Local farmers sell their vegetables and fruits in bulk; also for sale are clothing, furniture, hats, electronics, trinkets - practically anything one might need. This is where we bought most of our fruits and vegetables for the coming week. Because we were buying in such small quantities it wasn't unusual for the farmers to wave our money away when we held up two tomatoes or one small head of cauliflower. Even the staff at the local shops gave us a few candies when we bought staples from them.

We don't usually spend a lot of time thinking about, or describing, accommodations at farms (we are always grateful for whatever we are given) but these were worth a mention.  Our accommodations in Lisa were rustic at best. Outdoor plumbing, a propane stove, a jerry rigged styrofoam box functioning as a refrigerator, laundry detergent made of pig fat (it works! actually, really well!) were our daily rituals but we did have a wonderful, warm bedroom all to ourselves during our stay so technically it was higher-end than most of our camping experiences. The weather was fairly nice while we were there, so the cold showers weren't so bad - not that we bothered taking many. We didn't really need to other than to get the burn pile smell from our hair.

We didn't get to socialize much with the local villagers other than random hellos on the street; most of our interactions were with people on-site.  This was our first volunteer experience working with other volunteers. We arrived the week two young Australians were wrapping up their volunteer time in Lisa. They shared stories of hitchhiking across Europe, camping 15k from Lisa on the Danube river, being invited into the homes of locals who plastered them with wine and food, hanging out in the pub having awkward fits of conversation with non-English speakers... Not things we felt we needed to experience, but more power to them!

When the project manager told us about a neighbor who sold homemade wine for 4 lei/liter (~$1.30), on the other hand - that was something we were interested in experiencing. 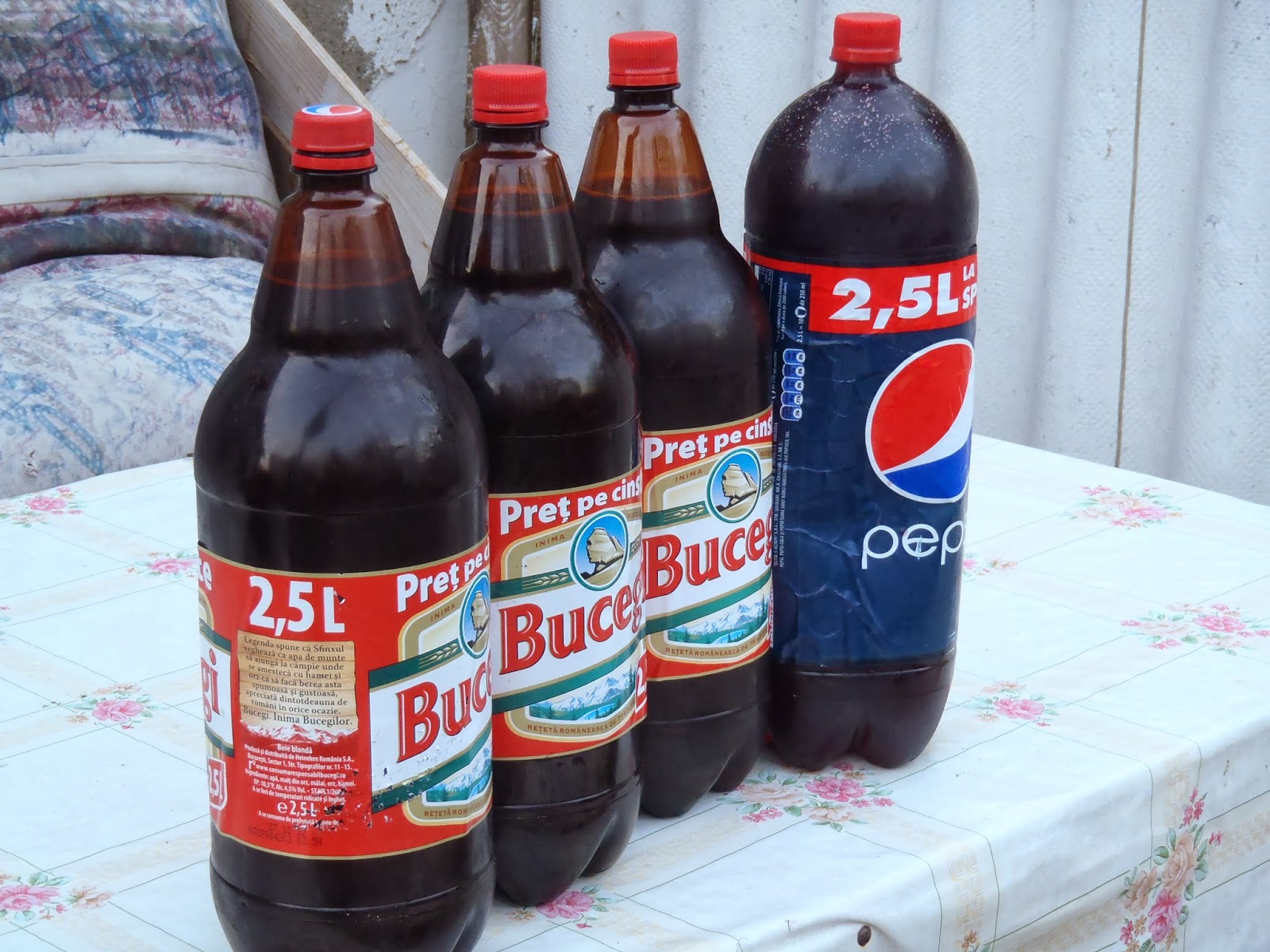 Unlike previous volunteer experiences, we were responsible for our own food preparation. Some food was from the garden (onions, garlic, squash, potatoes), some was provided (usually just AMAZING locally purchased sheep's cheese, eggs, some veggies and basic staples) and we were given money to buy food to supplement. We experimented with soups, pasta sauces, egg dishes and even tried crepes.  Holy cow WHY has it taken us this long to make crepes??  Almost every meal included onion, garlic, the aforementioned AMAZING sheep's cheese and a loaf of bread from the local shop. Simple, filling. When in Romania... 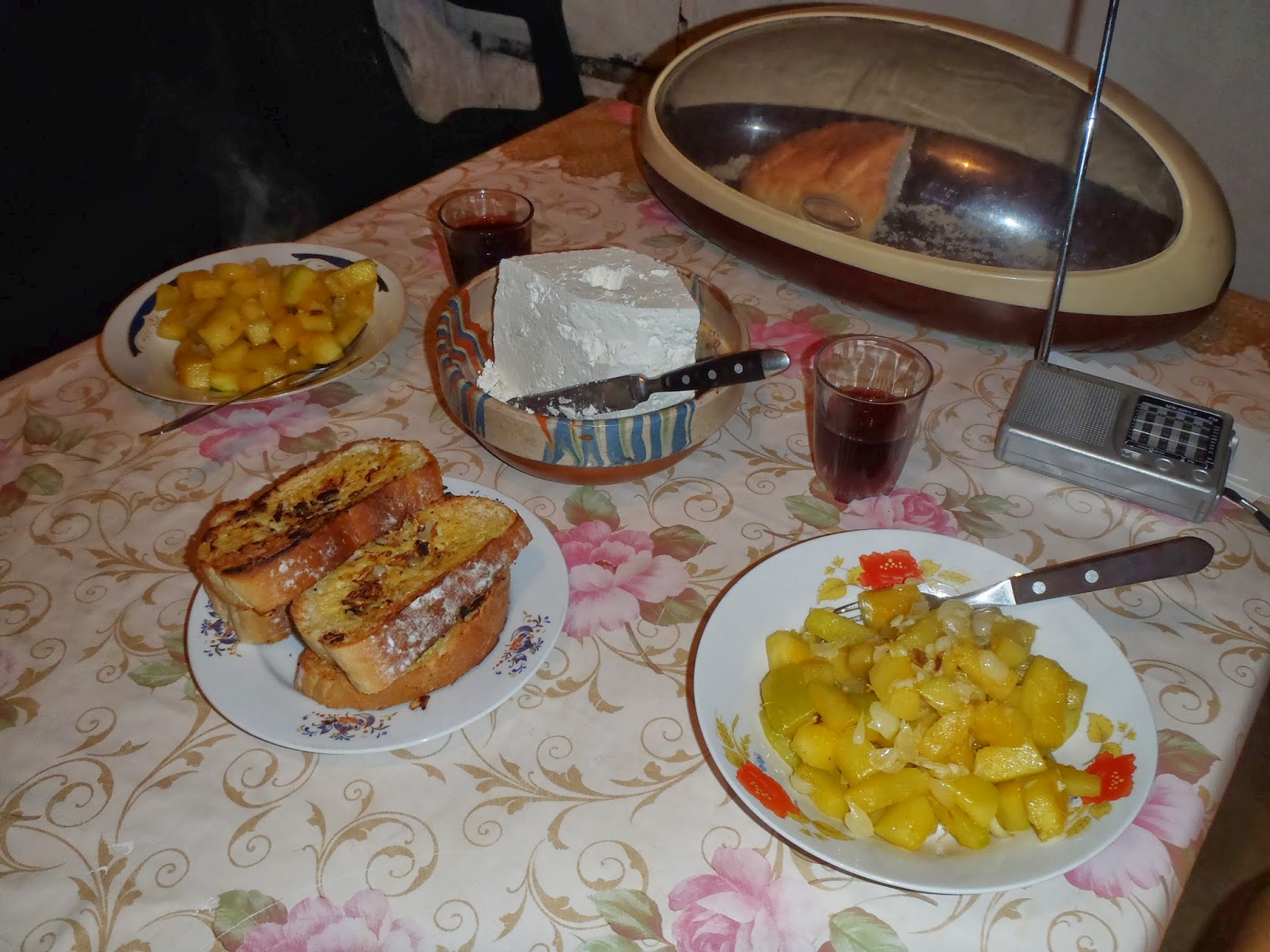 Our time in Lisa wasn't a romanticized dirt road quiet farm living experience though - as romantic as all that can be. There were three things that caused mild discomfort during our stay, and none of them had to do with the accommodations.  (We're campers after all.)

One was the constant noise - everywhere in the village there were dogs barking, geese honking, roosters crowing, turkeys making odd non-turkey-like sounds, donkeys braying. Occasionally a cow who sounded like Chewbacca would let out a wail. During the day there were chainsaws and tractors. Constant noise. Constant.

Two was the alcohol consumption. (Not ours! We learned our lesson fast.) Walking down the main street at 9am on Sunday morning, the pub was already hopping. Granted, they do start their workday early, but... Later in the day, every day, ALL the pubs were hopping. Several times a local gentleman appeared at the house drunk. He knew the project manager and was harmless, but it was still a mentally draining experience. (Eventually he was asked not to return, and he didn't.) And the beer sold in 2.5L bottles at the shops... From the looks of all the bottles in the creeks, the town goes through way too much beer.

Three was the trash. Trash everywhere. Lining the small creeks alongside the dirt roads, thrown in to the fields, piled at the construction site (we had to dig through a layer of trash to get to dirt when replanting the walnut trees). 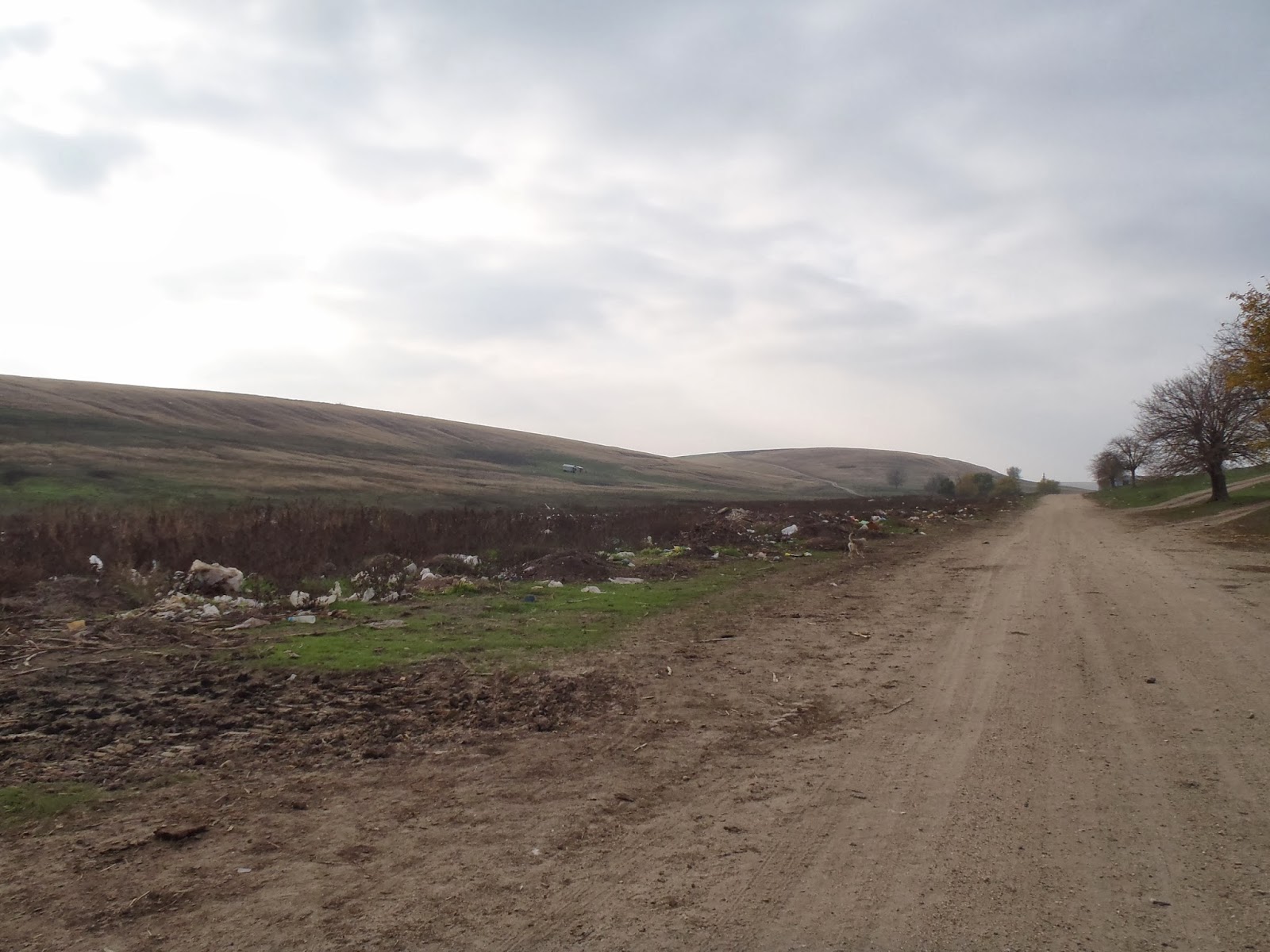 Recycling is not a priority in this part of the world, but reuse seems to be - where we volunteered there is a plan to use plastic bottles for a pipeline to fill the pond at the back of the yard. And we reused beer bottles for the fine wine from our neighbor. So there's that.

These things affected our moods more on overcast days than sunny days though. On a sunny day all you had to do was watch the late season butterflies or Isi flopped in the sun, and nothing else really mattered. 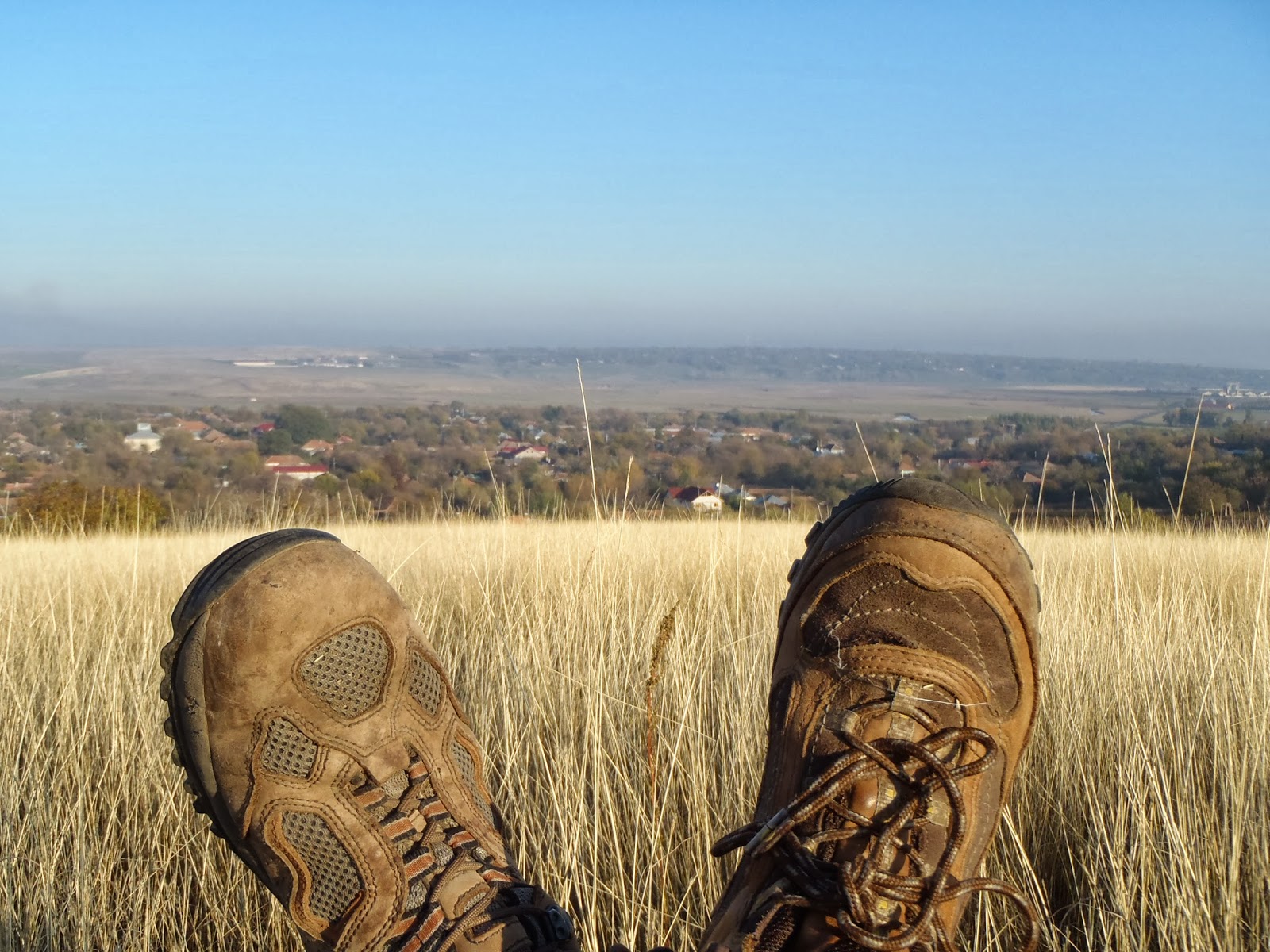 So say the naive travelers just passing through. Living here is a whole other story.

Yeah, we slowed down in Romania. It was a nice reminder to enjoy the good days and appreciate what we have - or what we don't have, as the case may be. No internet? Park a chair in the sun and finally fix that bag that's falling apart. No washing machine? Do laundry like 90% of the world does it. No work tasks at hand? Read a book. Or four.

Now we're ready for something a little more productive. Here's hoping our next volunteer experience in south-western Turkey will be busy and fruitful. But first... Istanbul (not Constantinople)!
Posted by Jen
Email ThisBlogThis!Share to TwitterShare to FacebookShare to Pinterest
Labels: central europe, romania, voluntourism