(Awful but appropriate subtitle: every rose has its thorn.)

After nine hours of the world's most uncomfortably hot overnight bus ride from Göreme to Burdur, the bus driver stopped briefly at a highway exit and pointed.

It was 4am. Pitch black. In the middle of Turkey. Not the first time Jen has been dropped off on the highway in the middle of the night... probably not the last time for us, either! We got our bags and walked a few hundred meters to the bus station to wait for our ride. At least it was cold outside - zero degrees celsius, to be exact - a pleasant change from the bus sauna.

Our volunteer host had assured us that the bus station was new and would be warm and safe, even at 4am, and he was right. We half-slept slumped over on hard seats for the next several hours. As promised, an older Turkish man in work clothes wandered over around 8am. "Lisinia?" he asked quietly. We nodded wearily, picked up our bags, and followed him across the parking lot to a small minibus with sideways benches instead of seats. The man spoke no English and several times during this walk, I prayed that I had heard him correctly. ("Wait, did he say 'taxi?' He spoke so softly. Are we blindly following some dude who is going to drive us around Burdur for an hour, charge us 150 Turkish lire, and then drop us at the highway exit like the bus driver?")

Nope. He had indeed said "Lisinia". He pointed Patrick to the front seat and me to a bench in the back where two Turkish ladies were already seated. I smiled hello. They smiled back.

This type of communication with the locals would be common for the next several days. It worked surprisingly well.

The driver picked up about eight more ladies on the way to Lisinia. The back of the bus began to look and feel like a clown car. When the benches were full, the newcomers refused my seat, taking the floor instead. 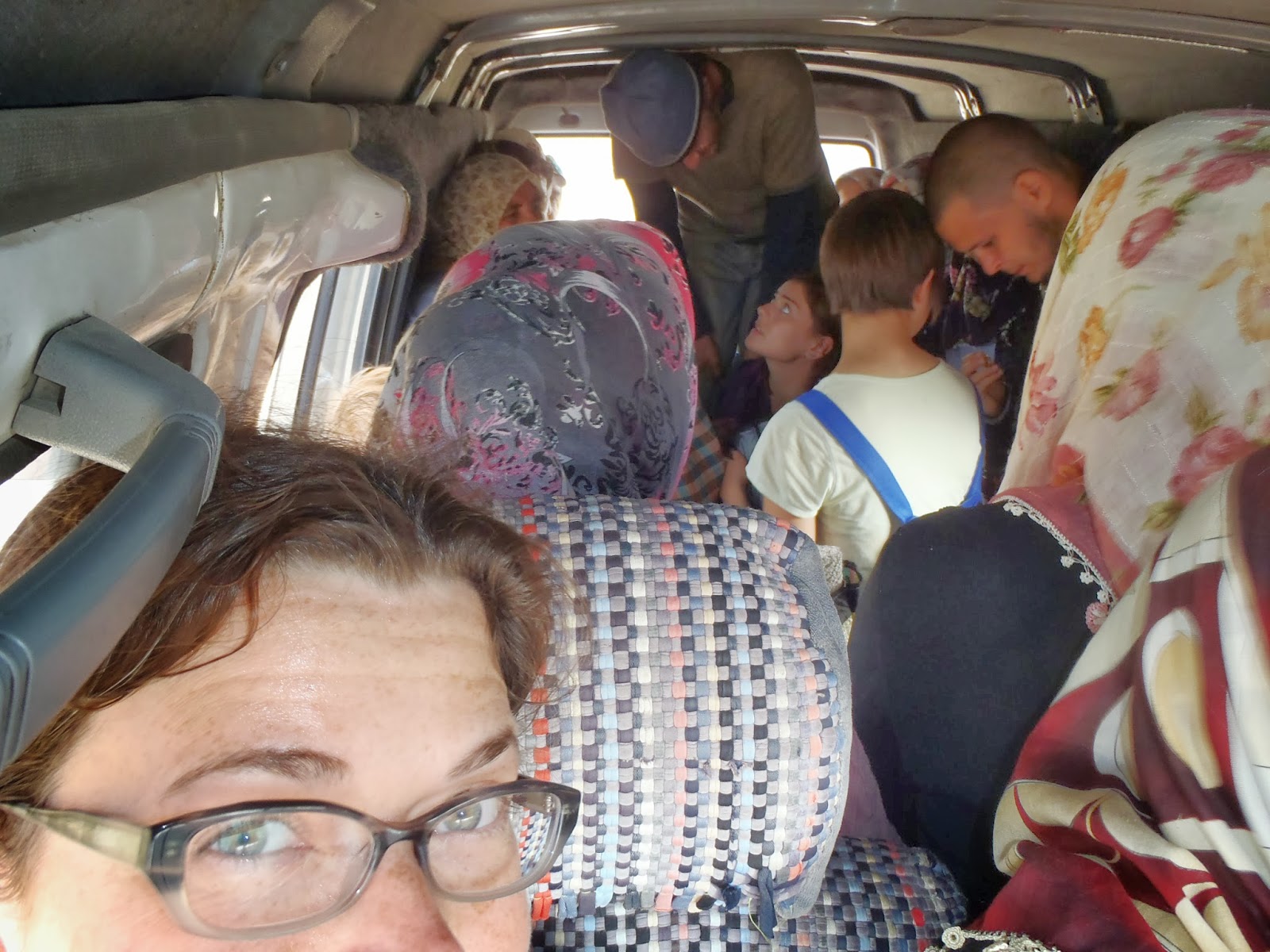 One lady passed around hard candies and insisted we all take a few. They smiled, laughed, chatted. I may not know Turkish but I know gossip when I hear it. I smiled too.

We arrived at Lisinia Doğa and met the current group of volunteers - a Slovenian, two Romanians, a Canadian, an Aussie, a Swede. After a few days several of these folks would leave and we would be joined by three Germans and a Turk. The volunteer manager was Turkish; he was also the only one on the project fluent in English and we would interact with him the most. All but the Swede were in their early twenties. This gave the project a bit of a summer camp feel. (Fun for us for nine days... Actually, about four days of it was enough for us - we're old.)

Once again we arrived late in the season so the harvest work had finished. Our main job was to help bundle unearthed rose bushes and roots for replanting. 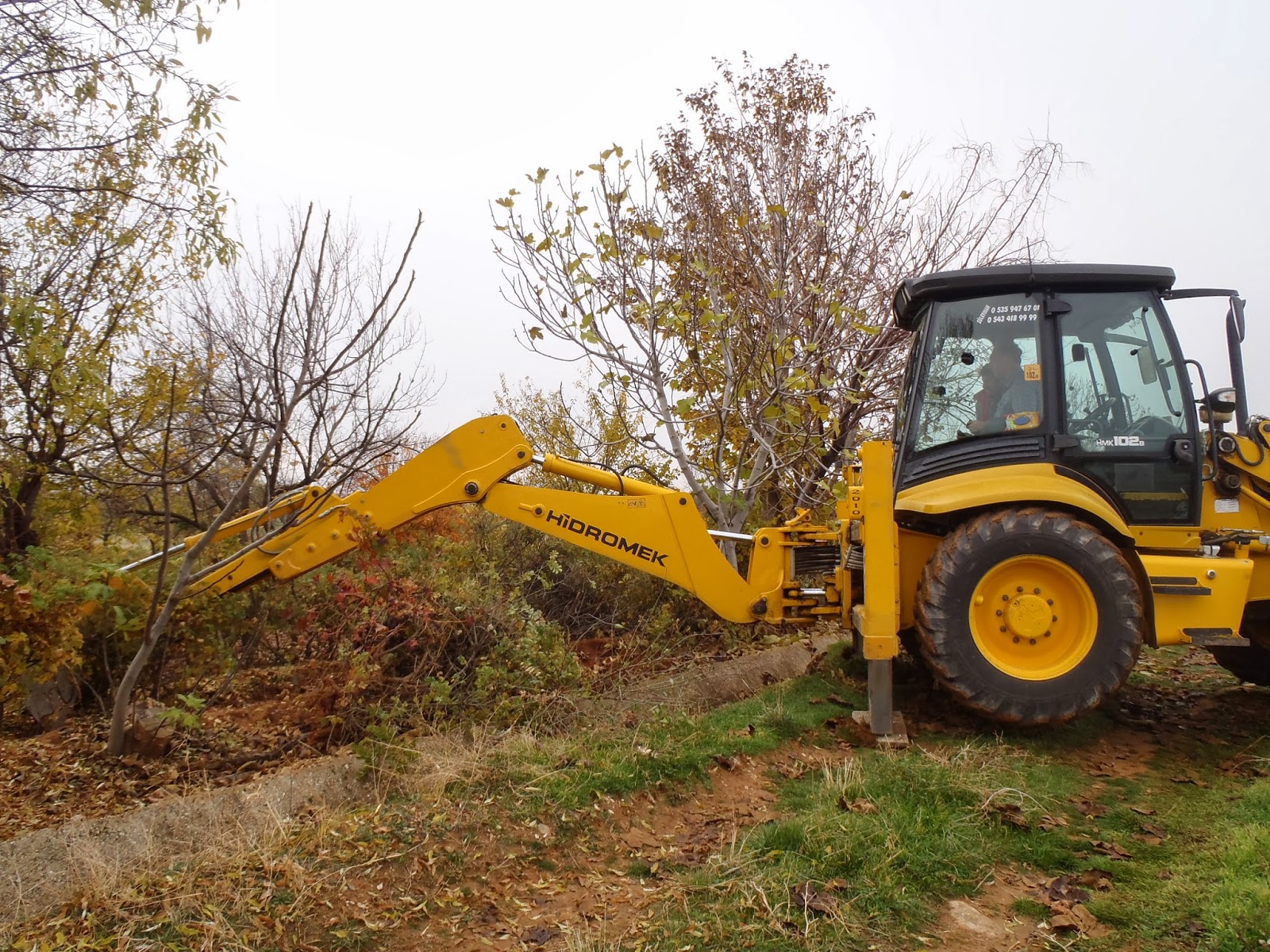 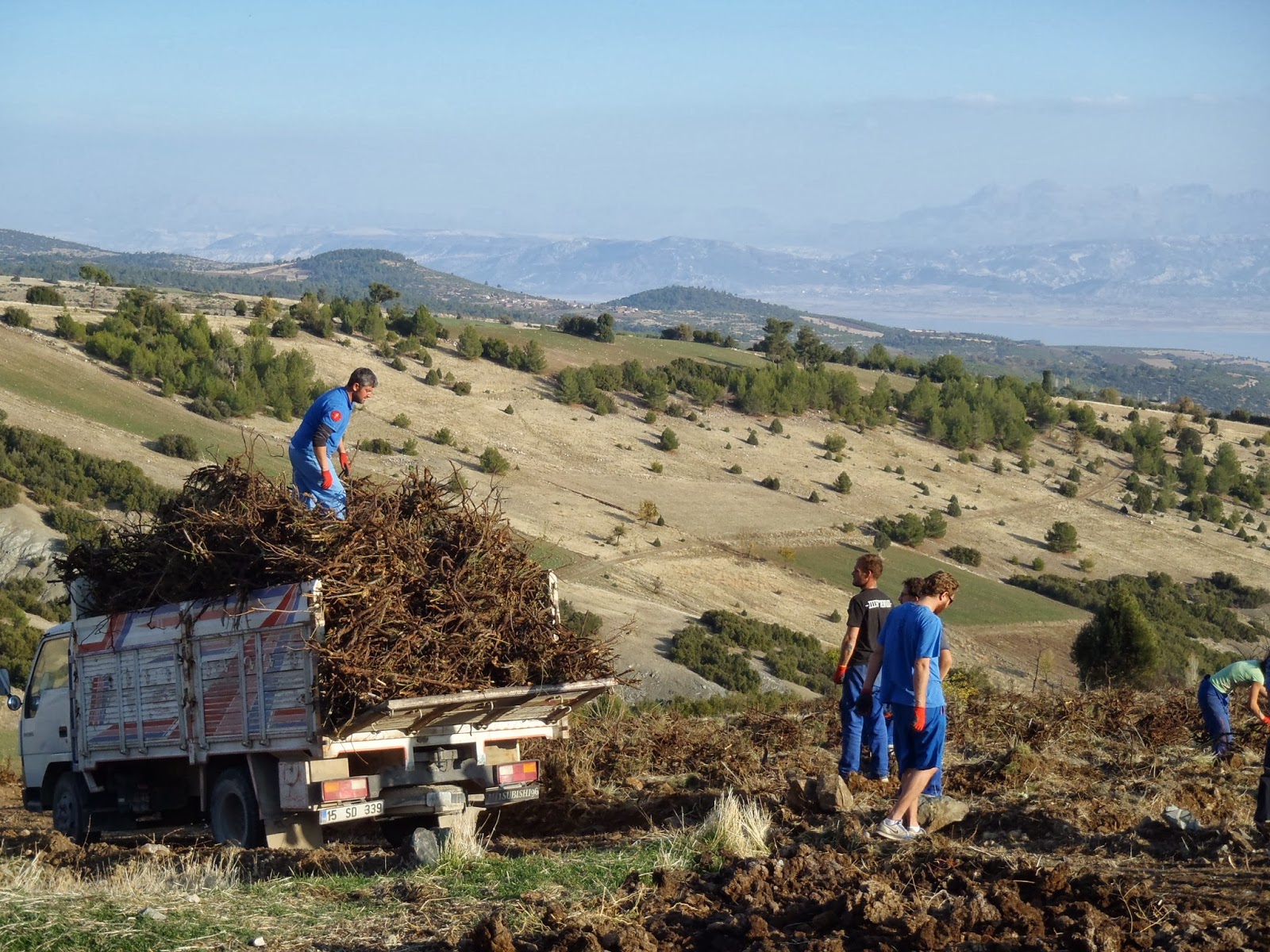 transporting, part one
fill the trailer 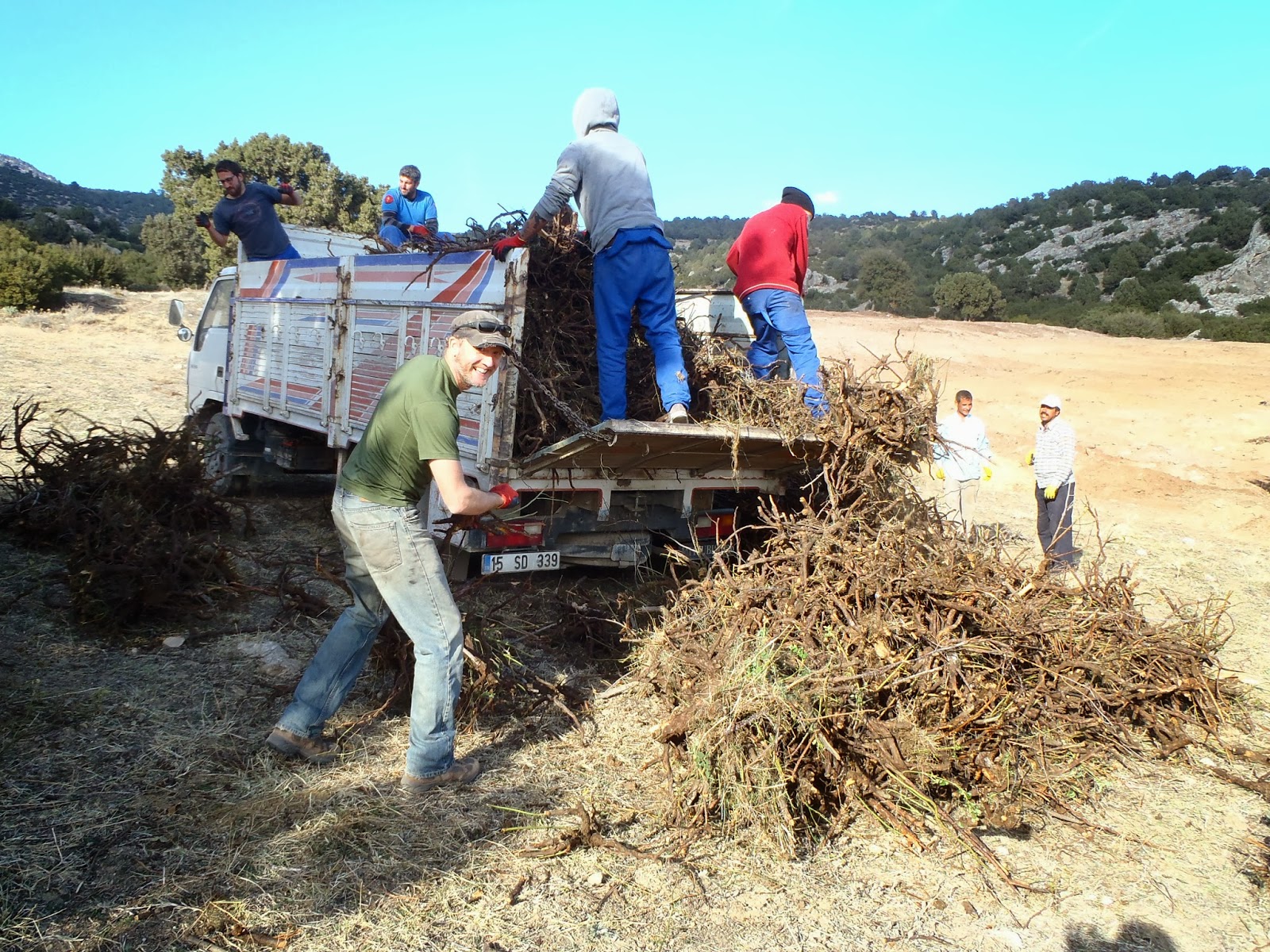 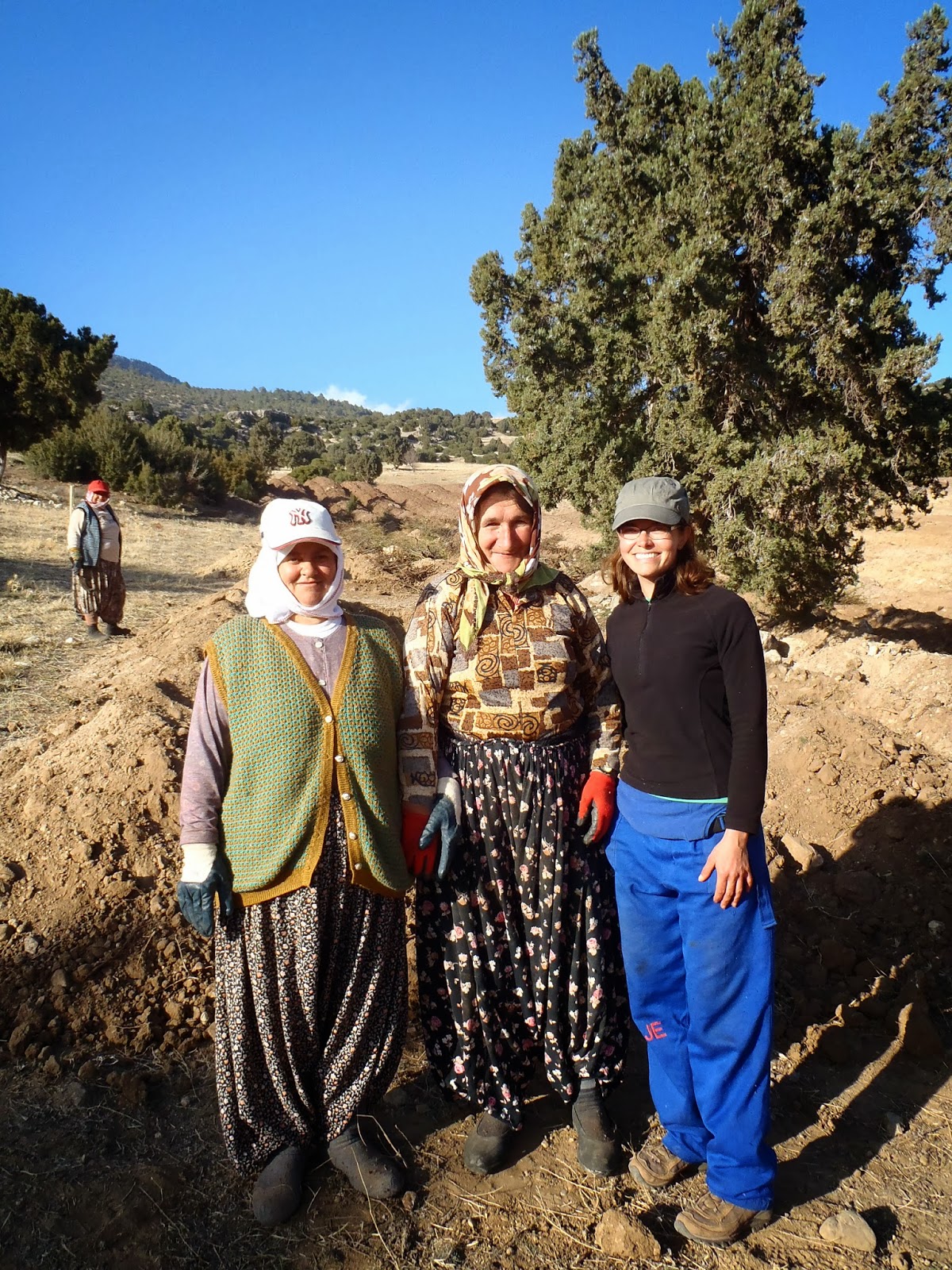 the ladies replanting roses
in the new soil 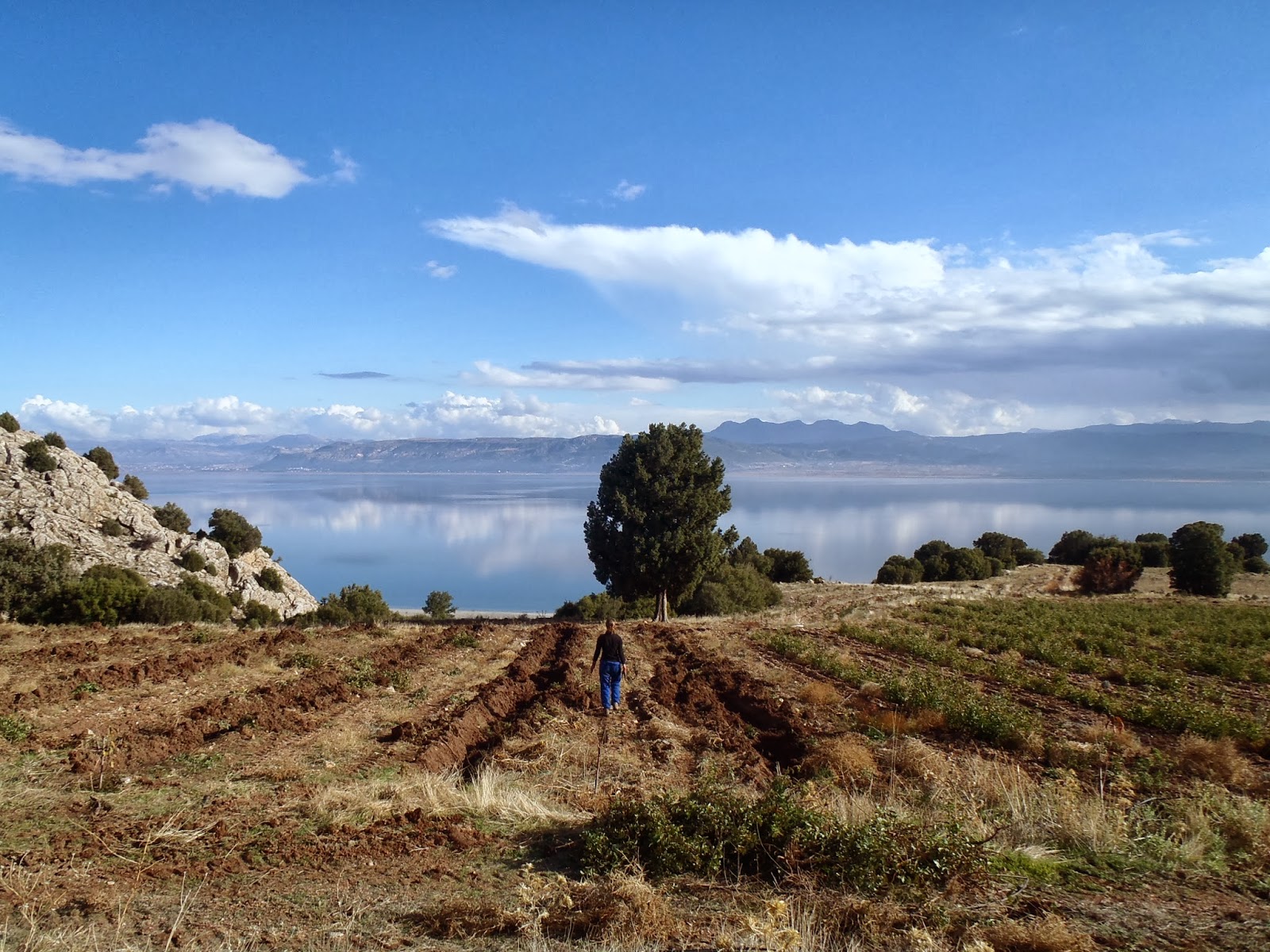 if we never touch another rose bush
for the rest of our lives... 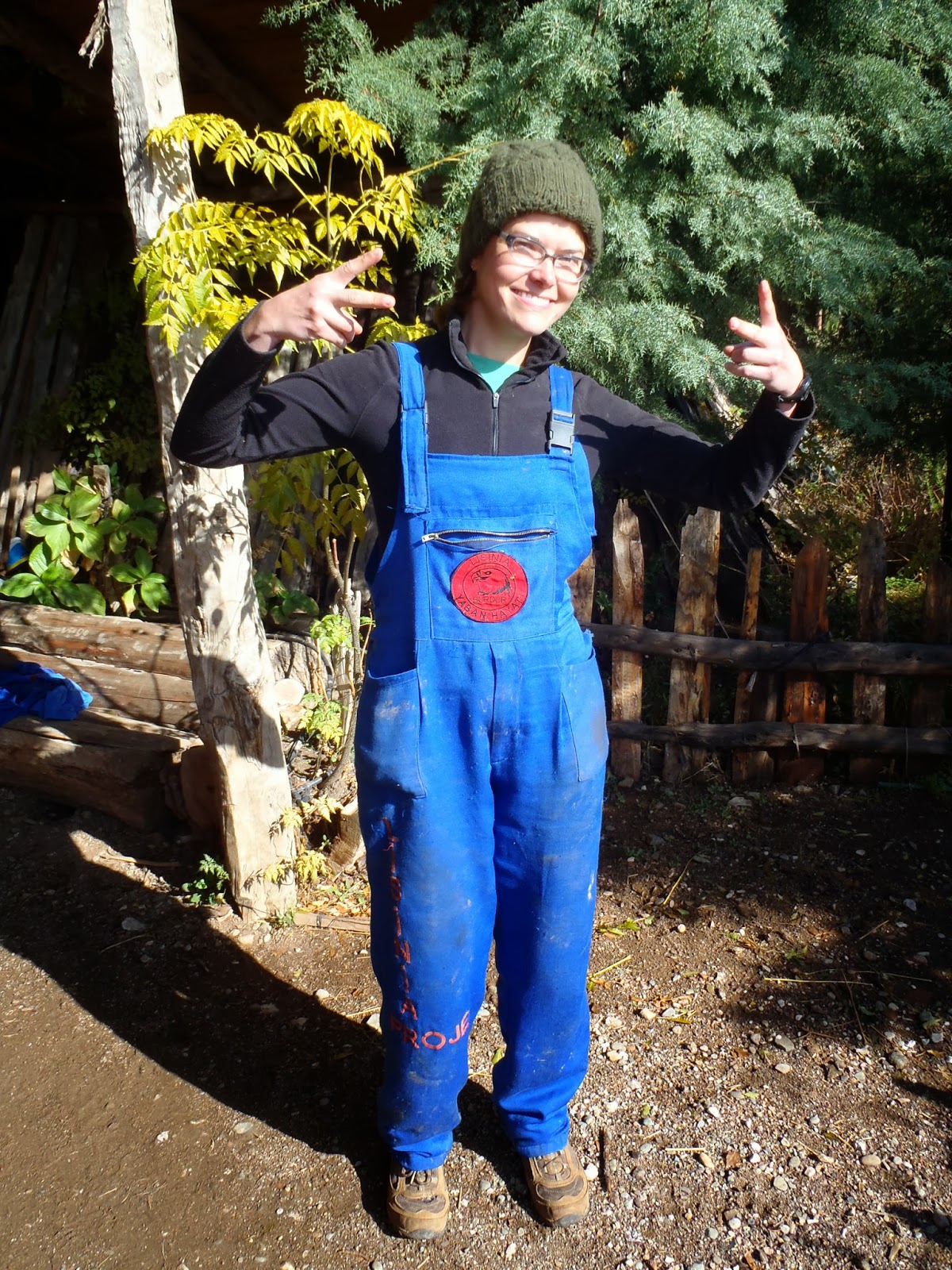 This area of Turkey is one of the biggest rose producers worldwide. Ozturk, who self-funds the Lisinia project, purchased neglected fields of roses in order to replant them in his own fertile soil, and will eventually sell them to support his wildlife rehabilitation and cancer-prevention-awareness programs. 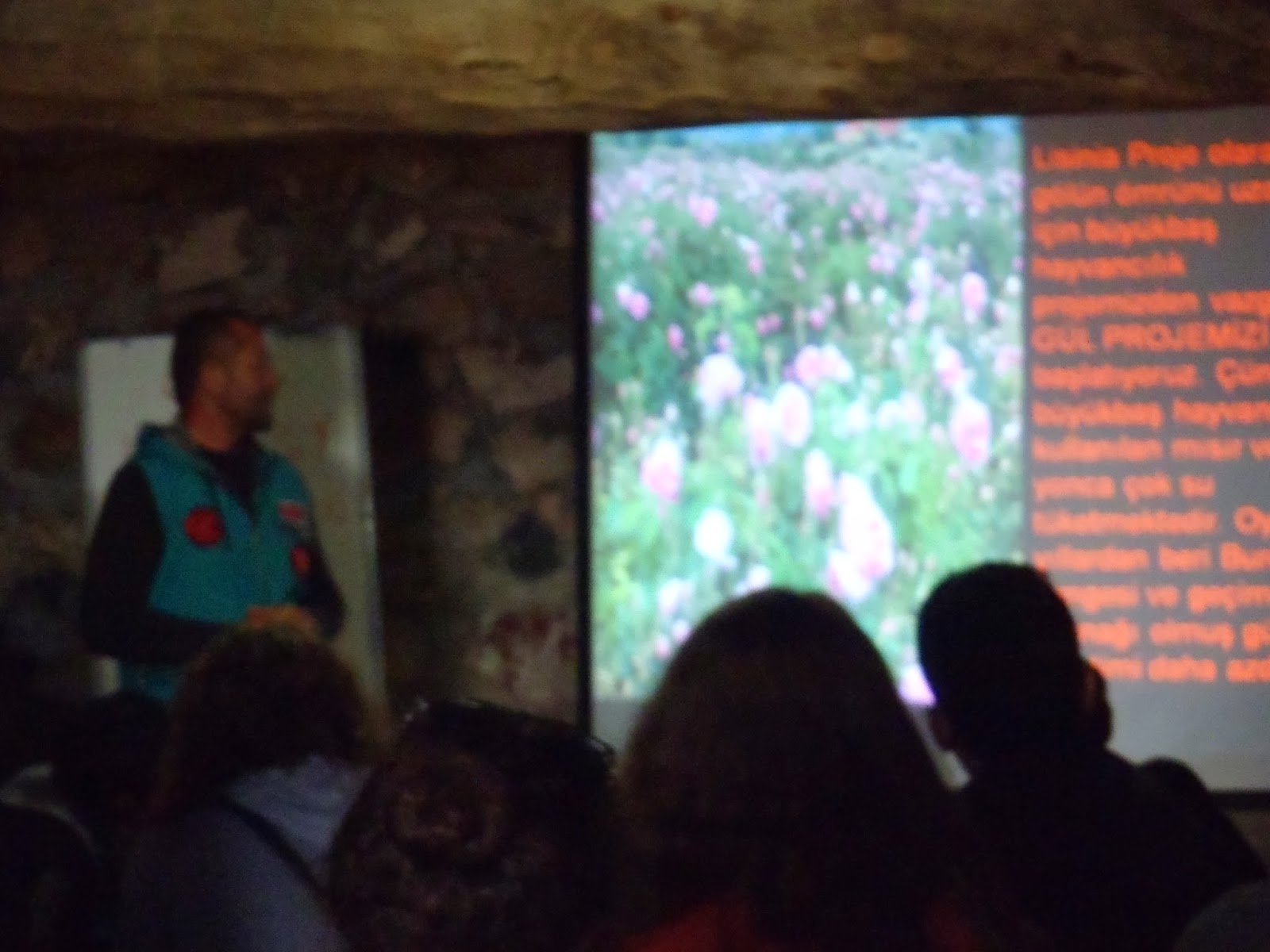 like this one
we were invited to
on our sixth day

Anyway. Rose branches and roots buried a meter deep will regrow into bushes. We had no idea. One afternoon Ozturk pointed to a nearby field; with the help of translation we learned that the plants had grown a meter high after just one year. We hope the new field fares as well.

Most days we worked with the other volunteers but we also spent a few days working alongside men and women from the village. Hearing the ladies' laughter as they chatted in the field, sitting with everyone during snack breaks or lunch, dancing to Turkish music when the tractor driver cranked the radio, working side by side to finish tying the rose bundles, cramming into the clown car after the work day was done - these are the memories that will stay with us. We may not have shared a language but once again, hand signals and laughter bridged the communication gap just fine.

The project also has huge orchards and fields that produce enough... er... produce to sustain a village, or in Ozturk's case, hundreds of volunteers each year. We enjoyed heaps of watermelon molasses, pear compote, canned tomatoes, apple desserts and olives during our stay.

And bread. Lots and lots and lots of bread. Sigh. (On the up side, I did try my hand at homemade bread and it turned out really well.)

Ozturk's project is well-intentioned. As we learned more about Lisinia we realized we didn't necessarily agree with some of his approaches and philosophies, and we were a bit disappointed with the late-season project management (or lack thereof - the work days were a bit chaotic, basic supplies regularly ran out, that sort of thing). Doesn't matter though - we still wish him and the project the best of luck.

We had one full day off so we took a hike up the hill behind Lisinia. Burdur Lake is surrounded by mountains and the views from the hills, the fields, the Lisinia camp are all really lovely. 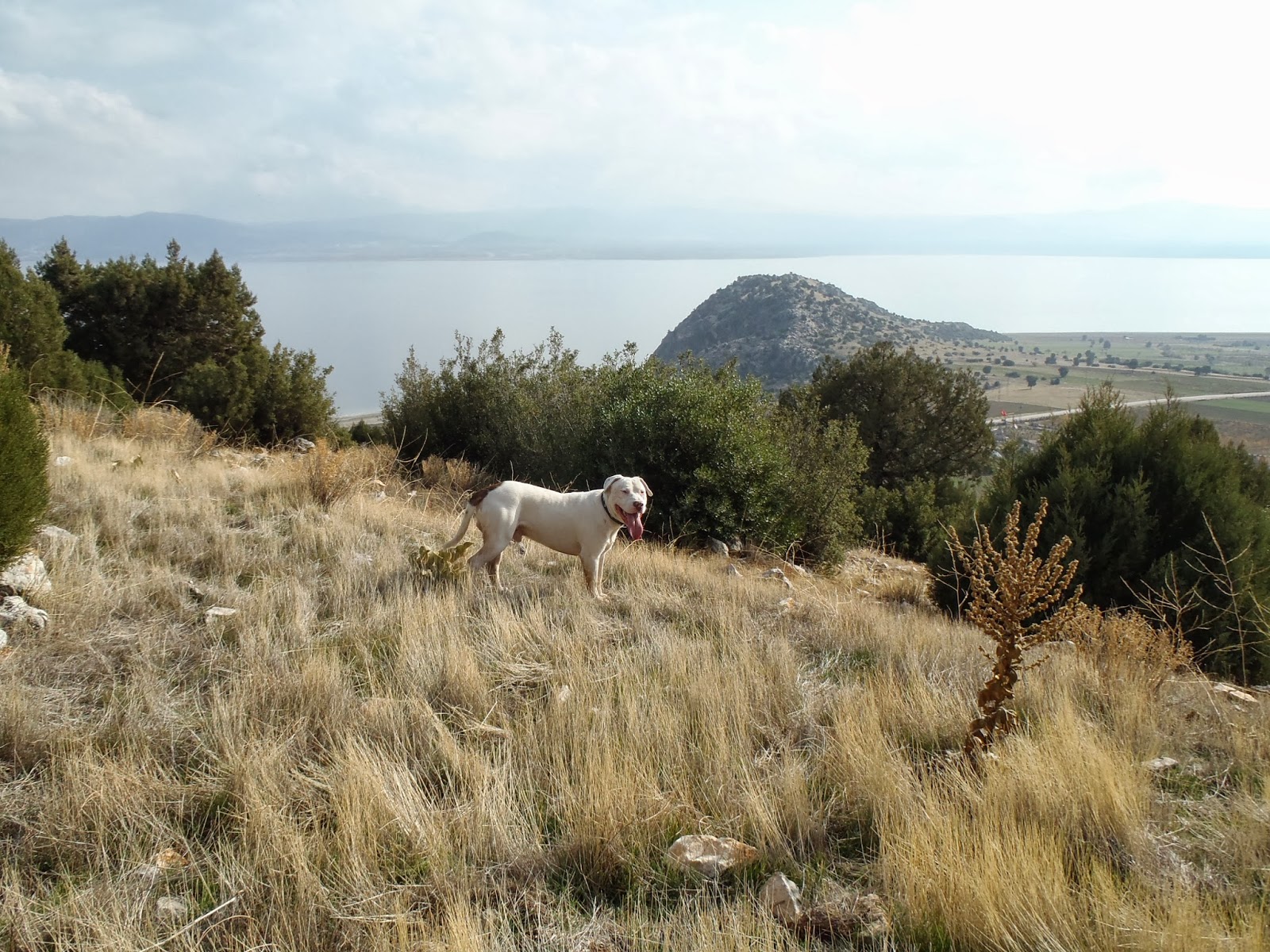 leo also joined us for a bit

Back to those thorns... In addition to the ones that rooted themselves into our hands, arms, and legs while we worked, we have one in our side as well.

We had some real challenges with about half of the age-20-something volunteers we worked alongside at Lisinia who did nothing but complain the entire time. Yes, it is a volunteer gig in exchange for food/shelter, but by not accomplishing the task requested of you in a reasonable amount of time, you are essentially freeloading. And even worse, you are generating more work for everyone else. We are not comfortable with this. And for the life of us, we cannot understand why young people feel entitled to behave this way. Or feel entitled at all.

We worked hard when there was work (as did several of the other volunteers), and the work was NEVER hard. One day we were all in the field for about three hours and one kid complained, sighed, wandered around aimlessly, and took breaks the entire time - all I could think was, "you wouldn't have lasted five minutes at Earth's Harvest or Buffalo Horn!" While we appreciated the kids' imagination and creativity in the kitchen, we wished they had shown such energy in the field. Or when it came time to clean up their messes in the kitchen. (Again, this was not everyone...)

But they did not.  So we will be choosing our volunteer opportunities a little more carefully going forward. We have also been choosing our hostels more carefully. Too many experiences with obnoxious, self-centered youth in hostel kitchens and dorm rooms has left a bad taste in our mouths. This must be why couples our age opt for hotels instead of cheaper accommodations when traveling...

Now get off our lawn.

And now we are off to Fethiye to enjoy some down time before a month of rescue horse care. We are looking forward to a little stability in a mature, structured household over the holidays before rejoining our fellow travelers.

We hope you are all enjoying your winter, wherever you might be, while we enjoy the Mediterranean coast, regular access to hot showers, and a white bread detox!
Posted by Slowly Global
Email ThisBlogThis!Share to TwitterShare to FacebookShare to Pinterest
Labels: turkey, voluntourism