Hopefully you've already read and enjoyed part one and part two of our Big Island "vacation." Now we're going to give some proper attention to Volcanoes National Park, where we spent two days during part two.

In four words: we LOVED this park. In a lot more words: we hope we can properly convey our love through a handful of pictures and just a bit of blah blah blah, and if you aren't ready to hop on a plane to Kona after reading this, we will send you $5... (Just kidding, we won't really send you $5 but we'll be very, very sad. And you don't want that, do you?)

Anyway. Volcanoes National Park is small but extensive - and like everything on the Big Island, driving distances and hikes take longer than you might expect. Here's a play-by-play of how we maximized our two days.

Day One, 8:00am: we purchased a National Parks annual pass in prep for our southern road trip this spring/summer. 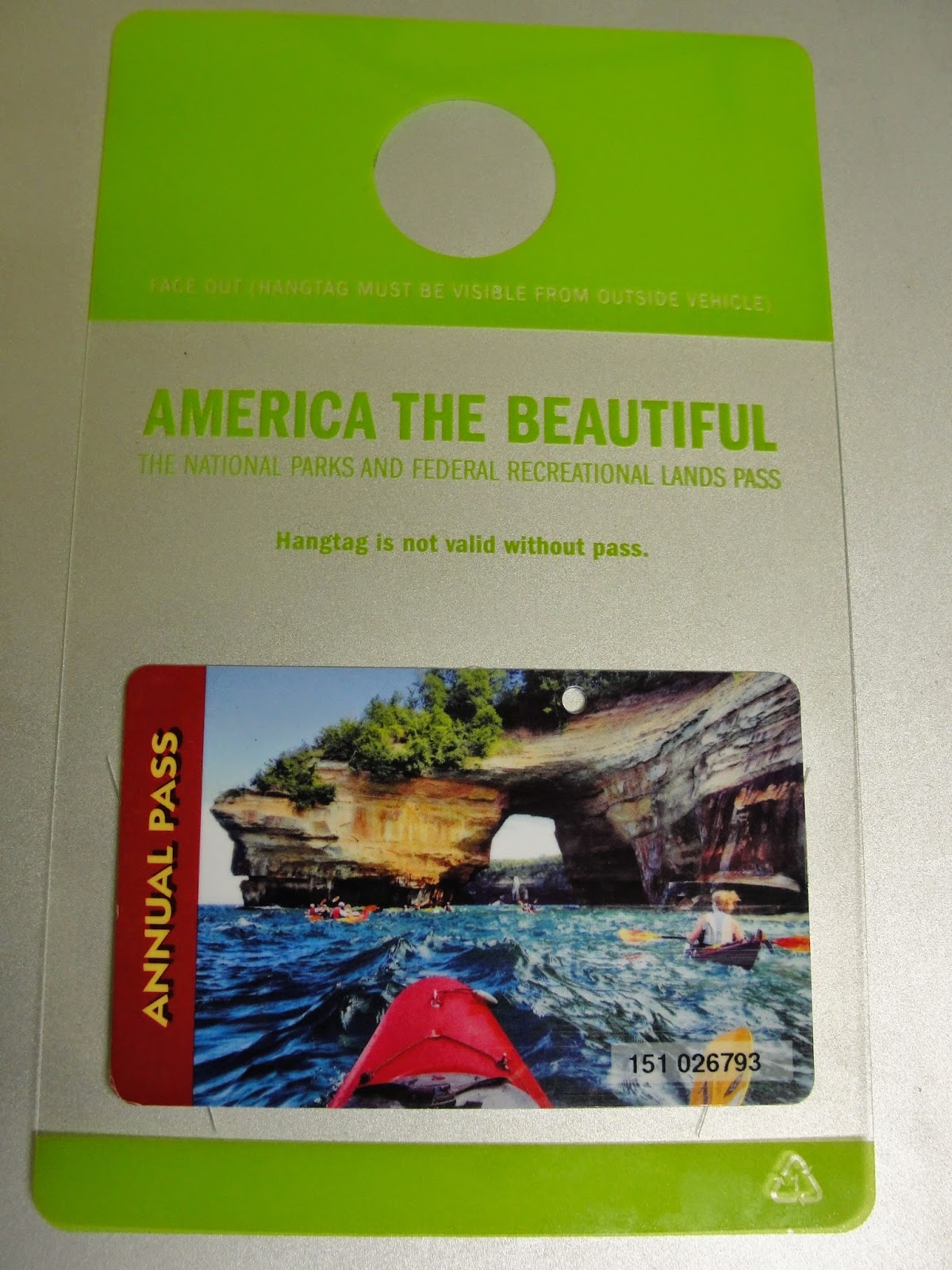 (note to selves: don't lose this)

Quick aside - hey, America! Did you know that just $80 gets your car and up to four people in your car into any National Park for an entire year? Thanks for nothing, expensive Canadian National Parks pass! (Just kidding, you know we loved you too.)

Day One, 8:15am: we stopped by the visitor center to get recommendations on hikes for the day but realized they don't open until 9:00am, so we headed to the Volcano House (a really posh hotel overlooking the crater) to check out the views. 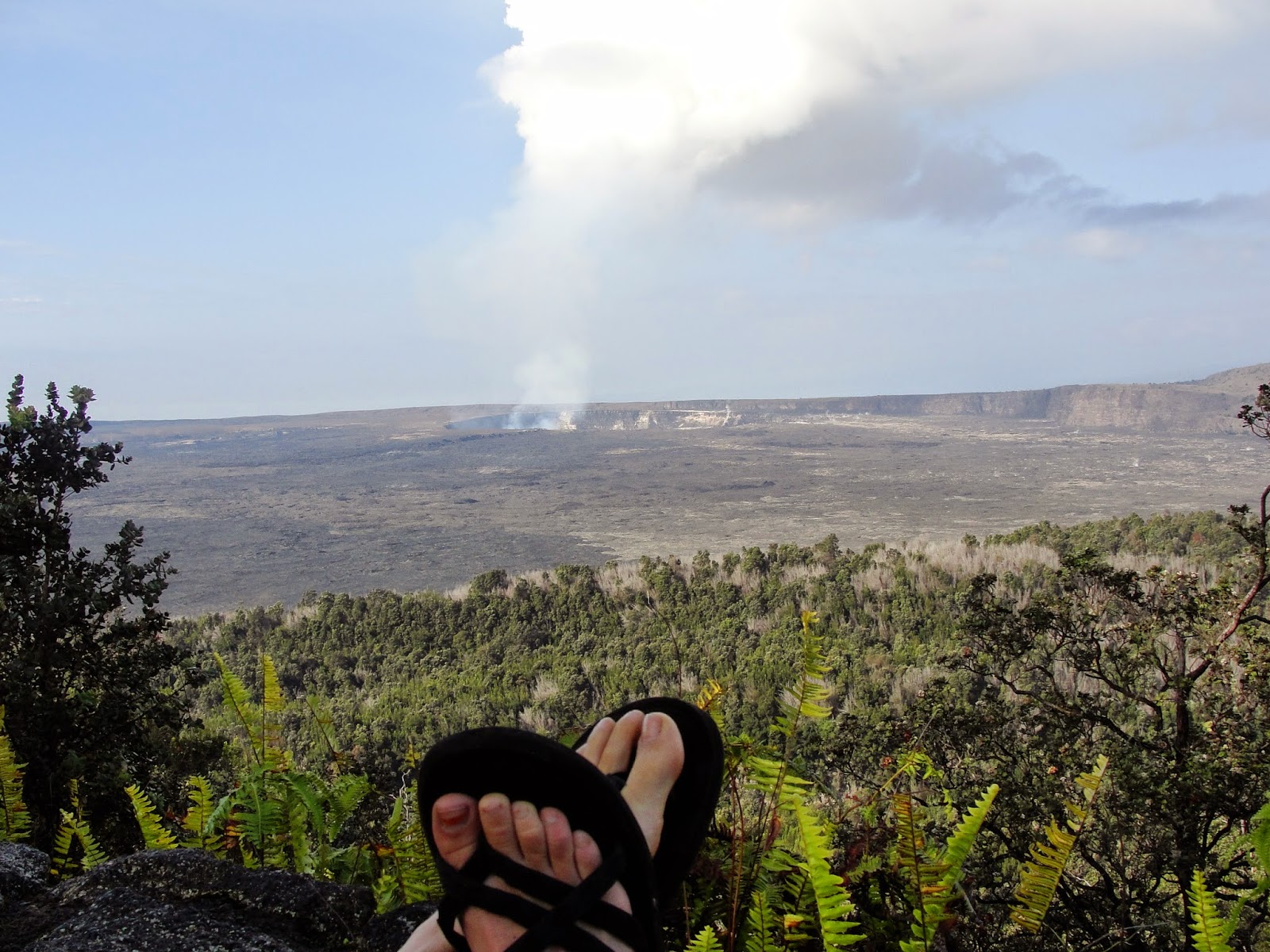 and what views they were

Hawaii's islands were formed from volcanoes over the last 70 million years and the lava is still flowing today. They've recently discovered that a new island is forming under the ocean. Crazy!

Pictured above is Kilauea Volcano and the Halema'uma'u Crater, where daily activity includes fluctuating lava levels and occasional small explosive events. This is what causes the "vog" (volcanic smog) that makes those beautiful hazy sunsets - and causes respiratory issues.

We stood there for a while and took it all in, leaving only when we couldn't stand the background noise from a kid's Frogger game anymore.  (Guess active volcanoes aren't that exciting to some 7-year-olds?)

Day One, 9:00am: we barraged the ranger as soon as the visitor center opened and got our marching orders for the day. First stop was the Mauna Ulu parking lot so that we could hike the Napau Trail to Makaopuhi Crater. This 10-mile return hike along 1973 and 1974 lava flows gave us awesome perspective on the vastness of the park. We passed steam vents, walked over lumpy terrain, and admired a variety of foliage trying to make a comeback. sitting in a lava lake 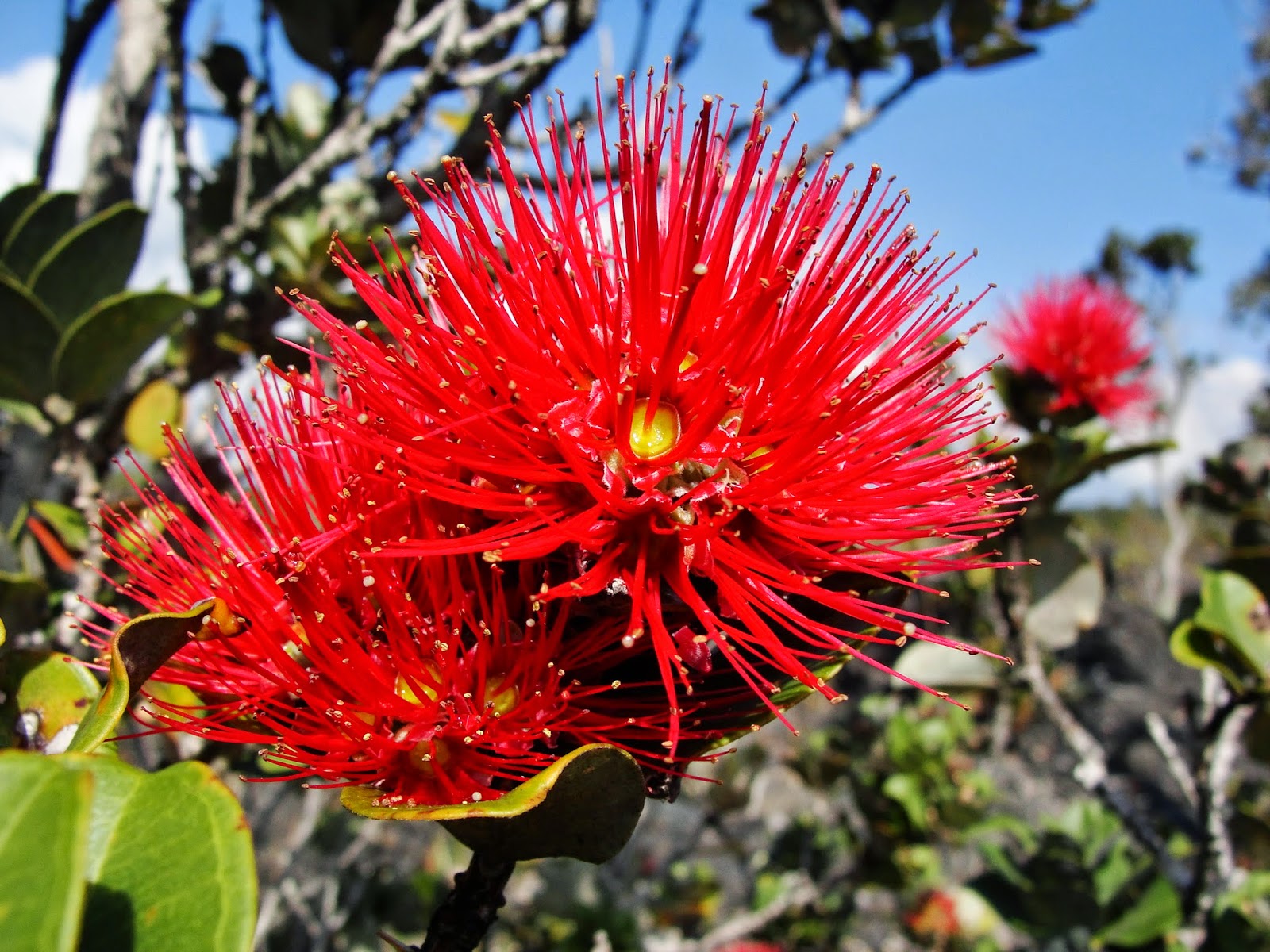 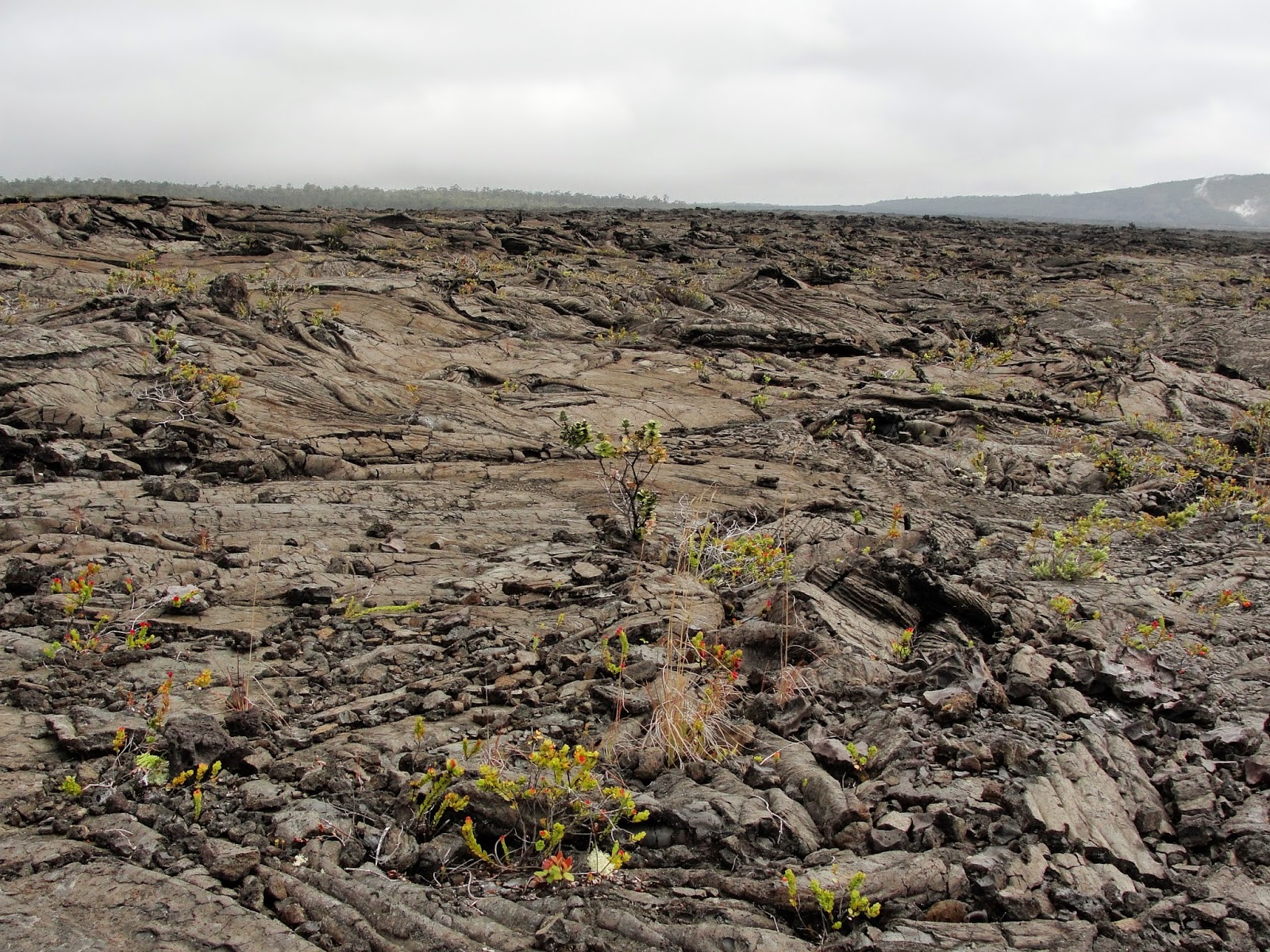 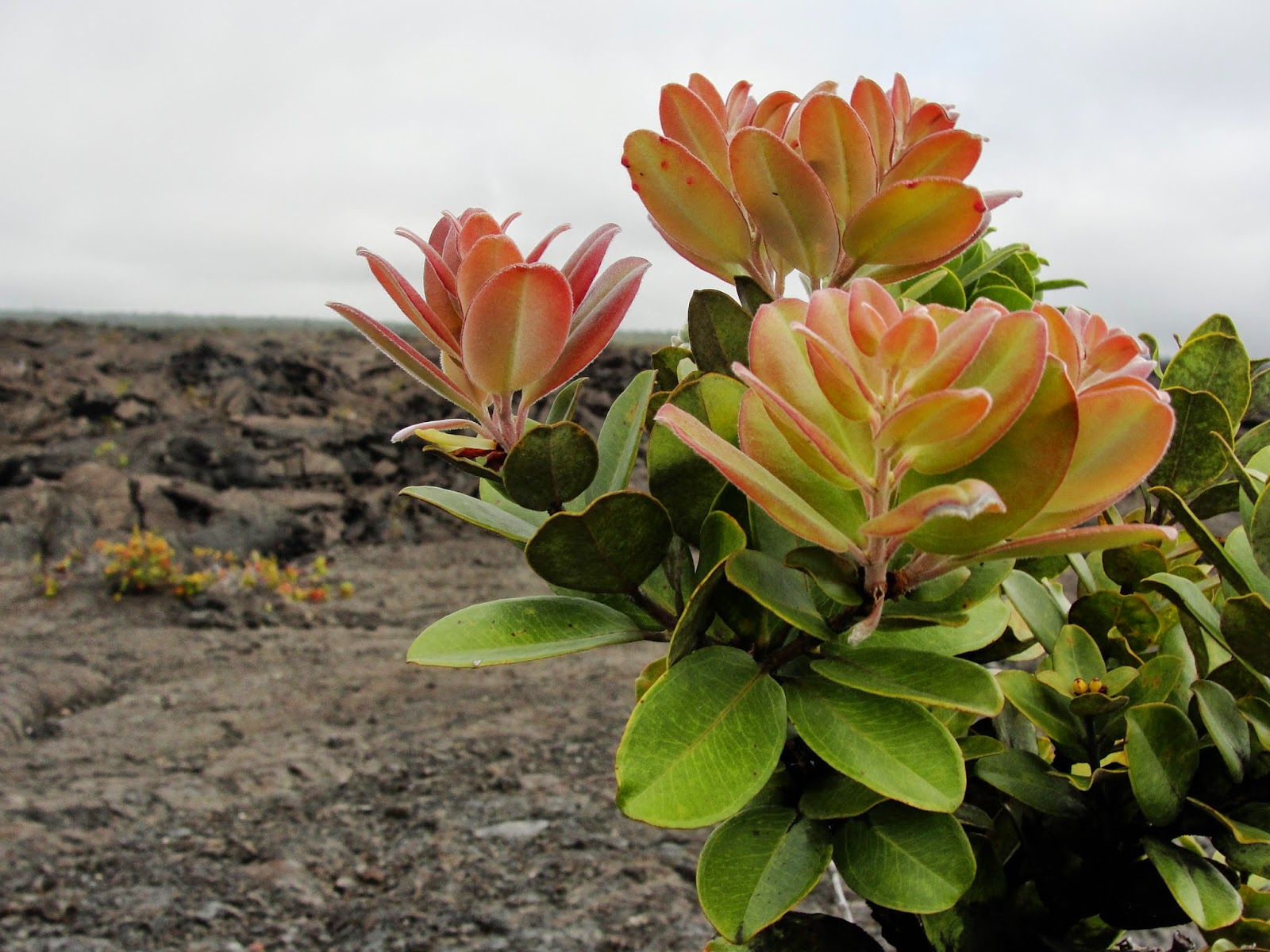 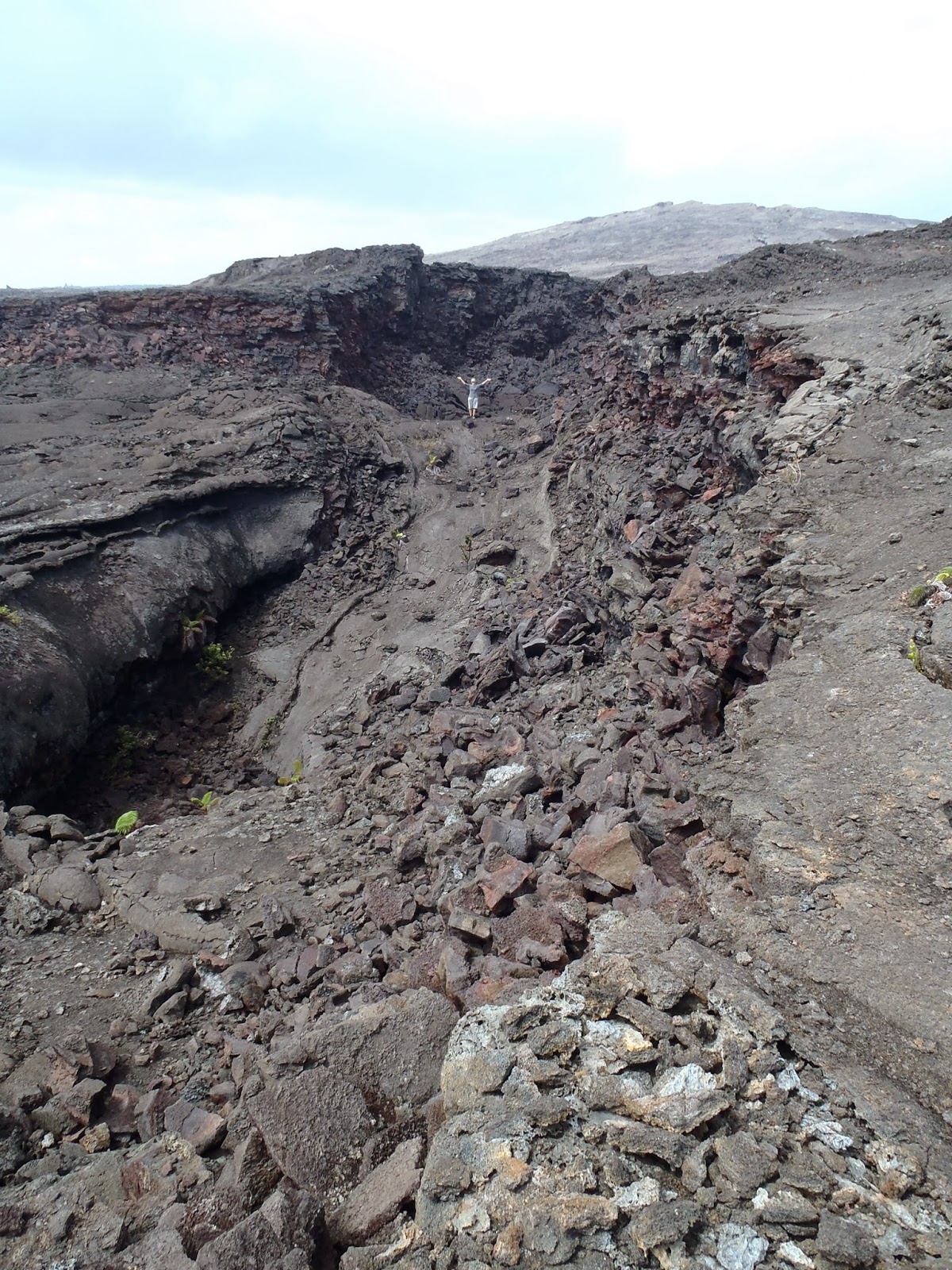 standing in a former lava flow 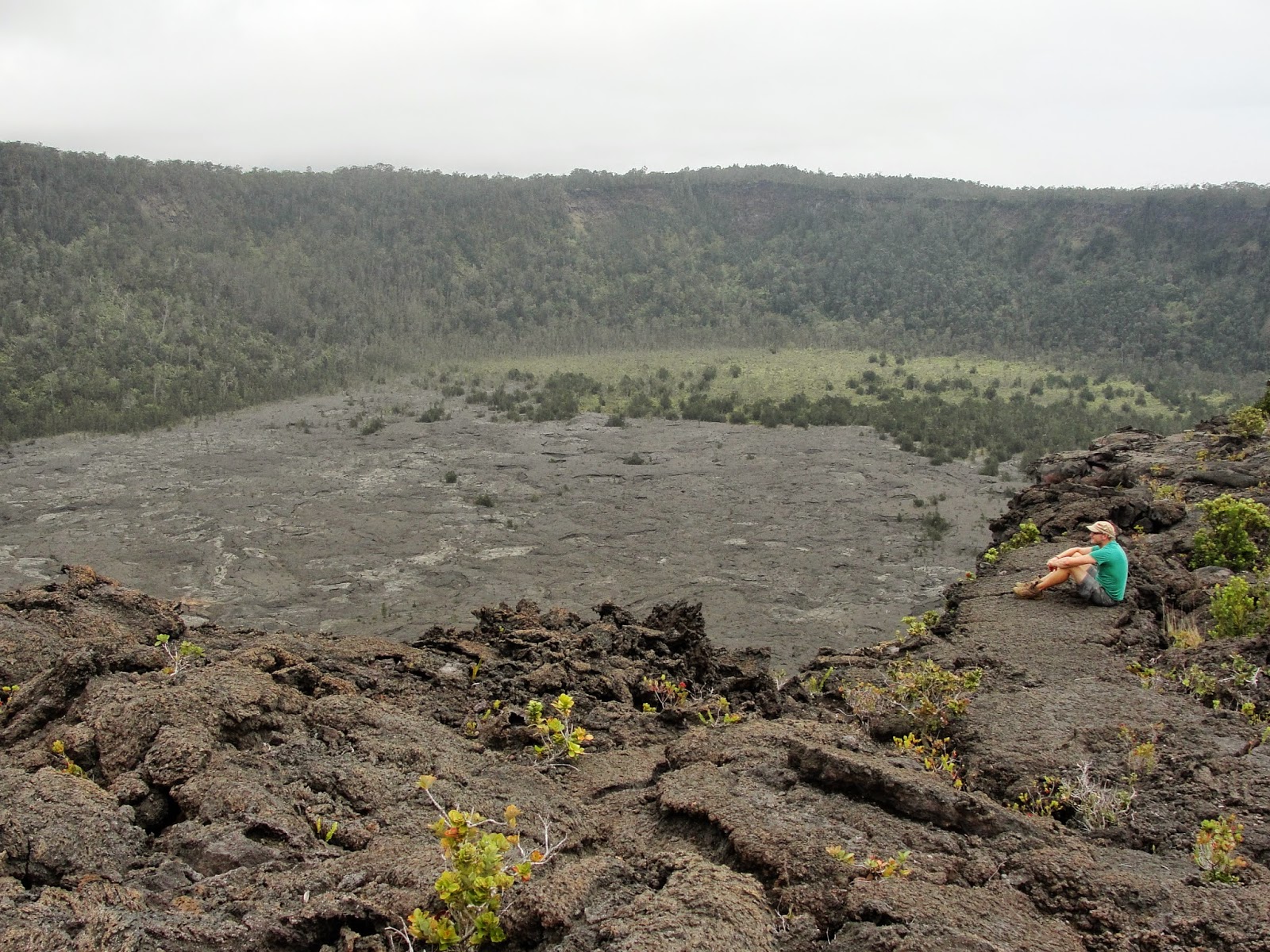 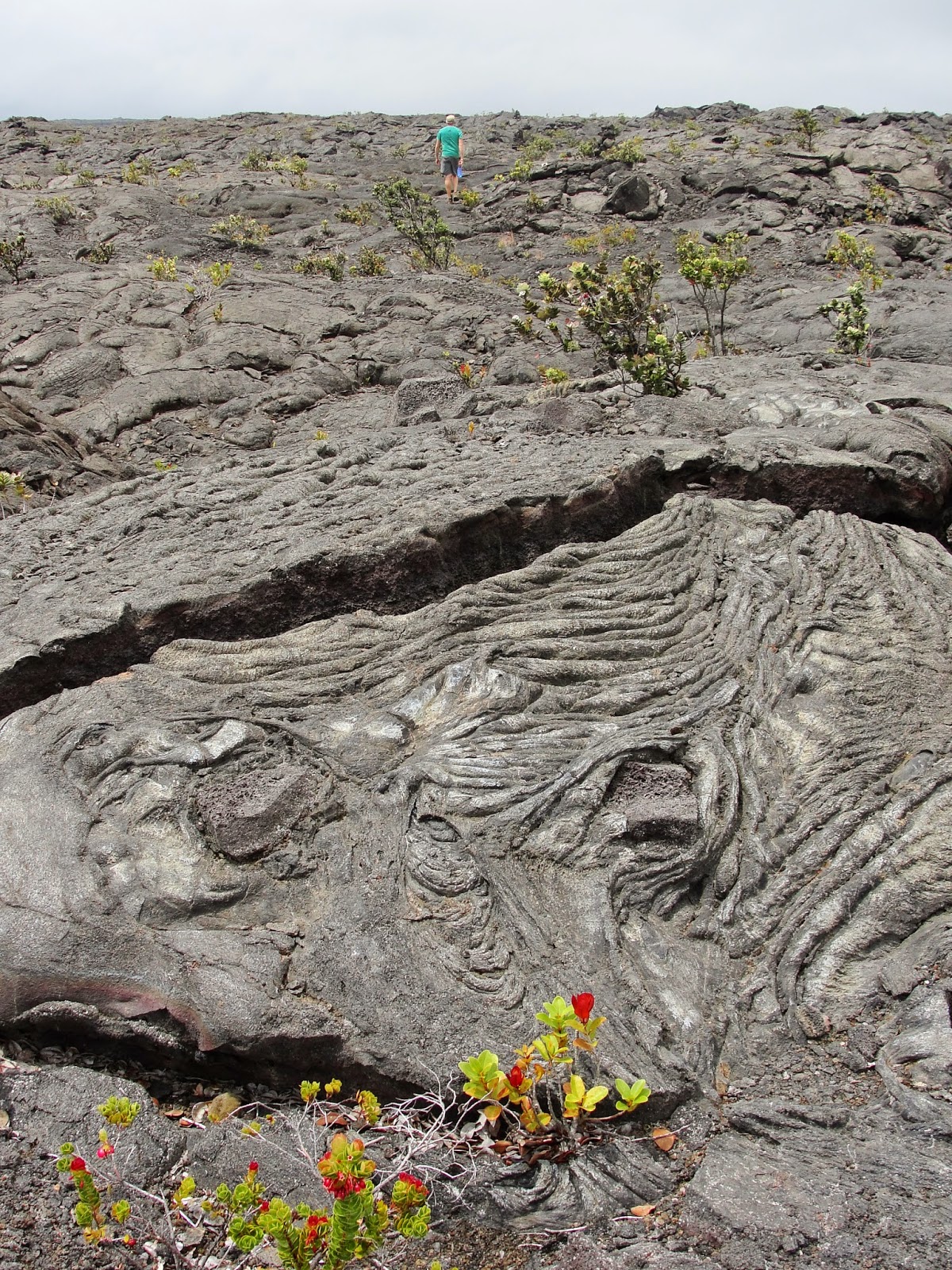 It was a really nice hike, flat most of the way, and we only saw four people the entire time.  Ranger recommendation for the win!

Day One, 1:45pm: on the way back, we walked through a rainforest to climb the short trail to Pu'u Huluhulu, a 400-year-old cinder cone. The views were not that great that day but on a clear day you can see Kilauea, Mauna Ulu, Pu'u O'o, the Pacific Ocean, Mauna Loa and Mauna Kea. 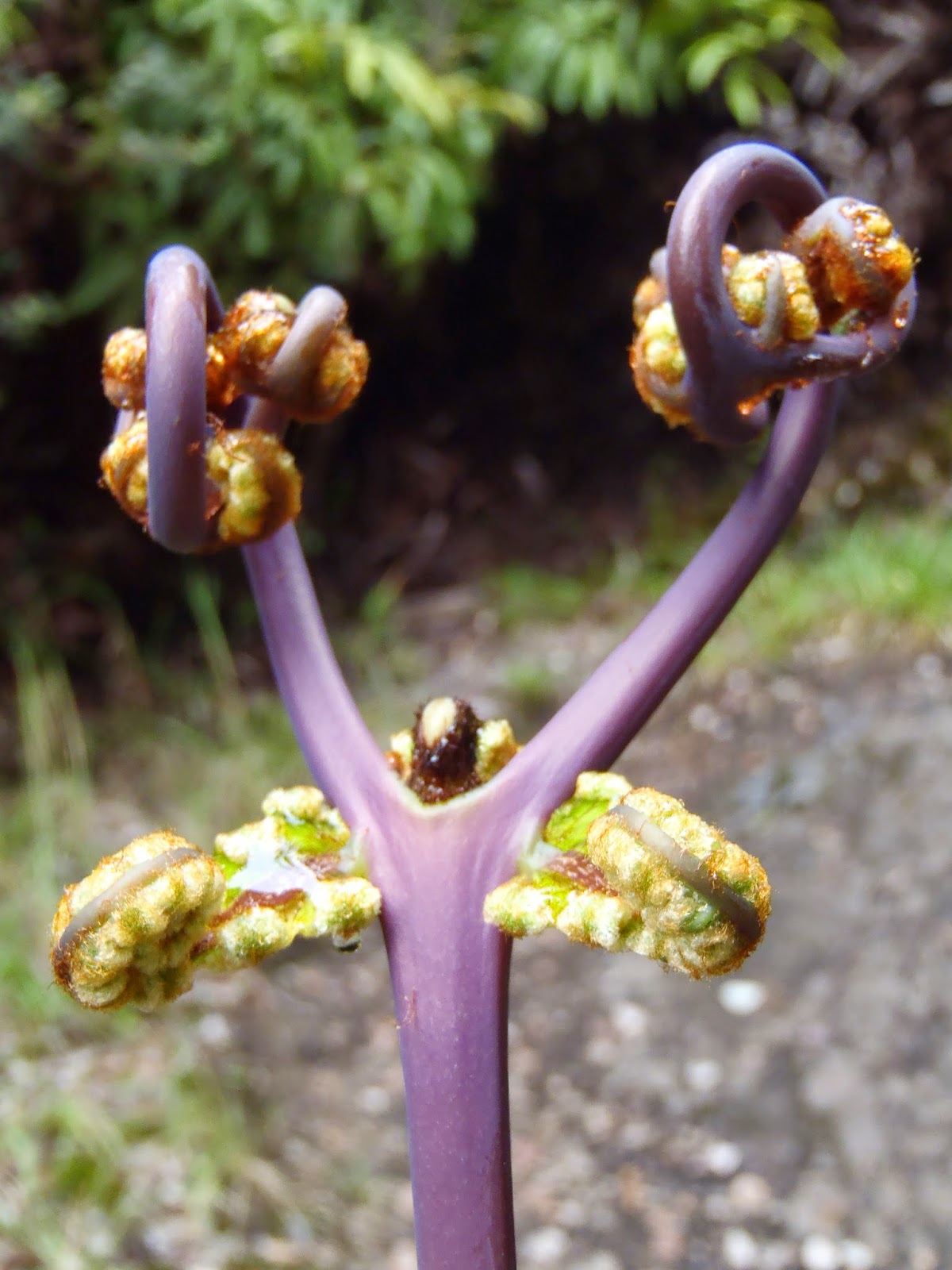 Day One, 2:15pm: we stopped by the fissure right near the Mauna Ulu trailhead. 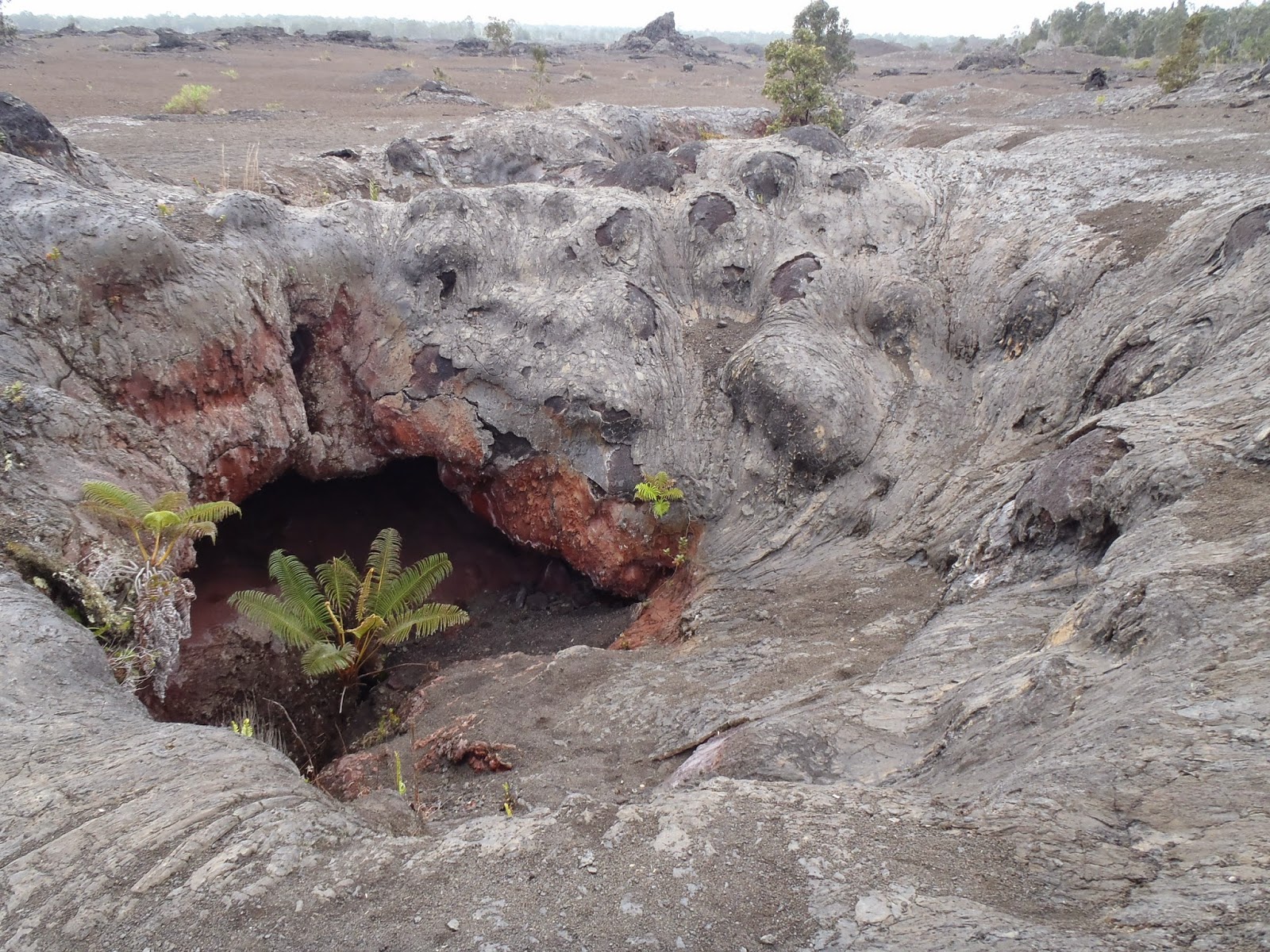 green where lava once spurted 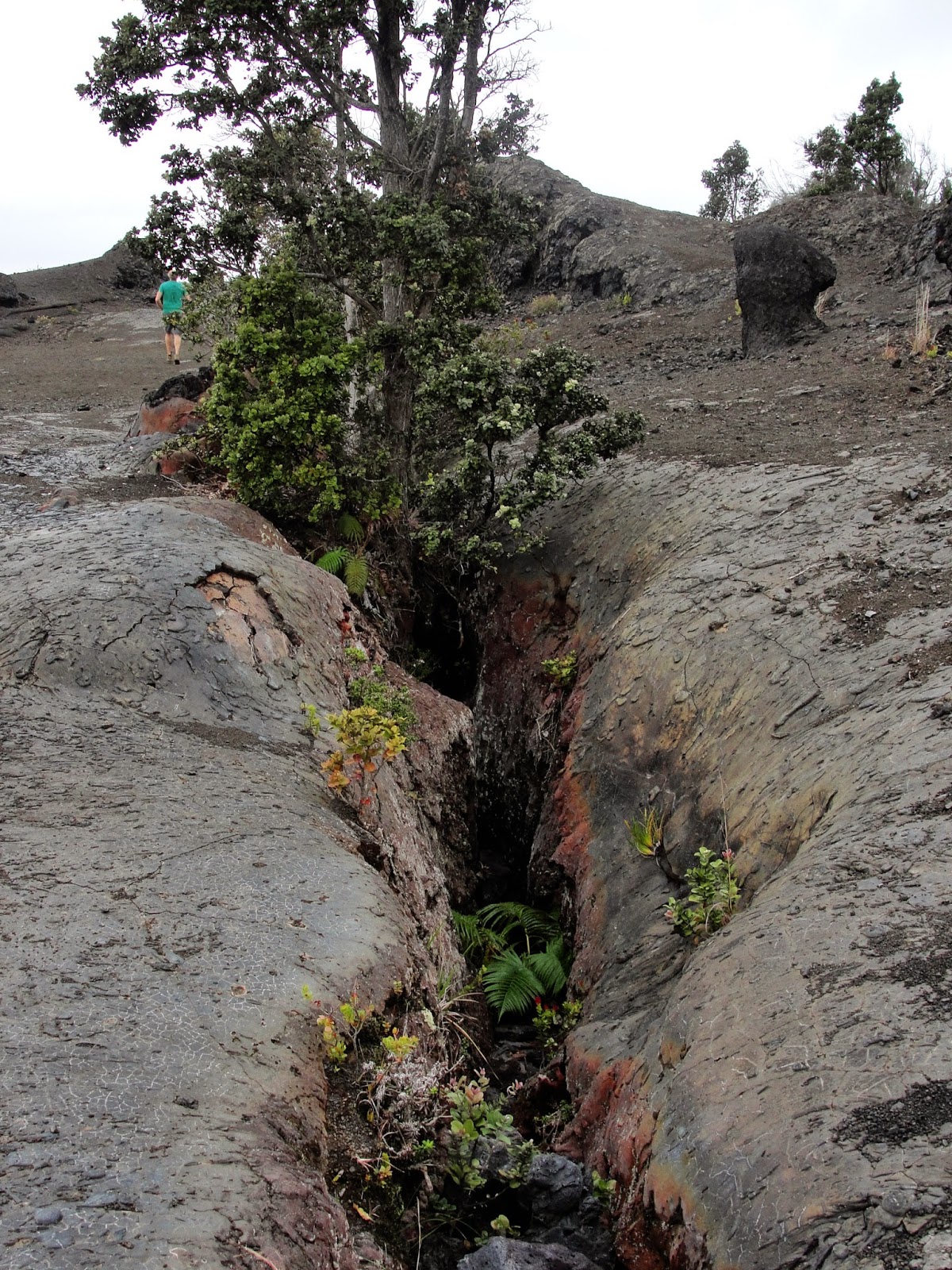 look for Patrick for perspective

Day One, 3:00pm: we took the 20-minute drive down to the southernmost point of the park. (I'd seen the petroglyphs when I was here in January so we skipped that and headed straight to the arch, but I do recommend that short walk if you have time.) 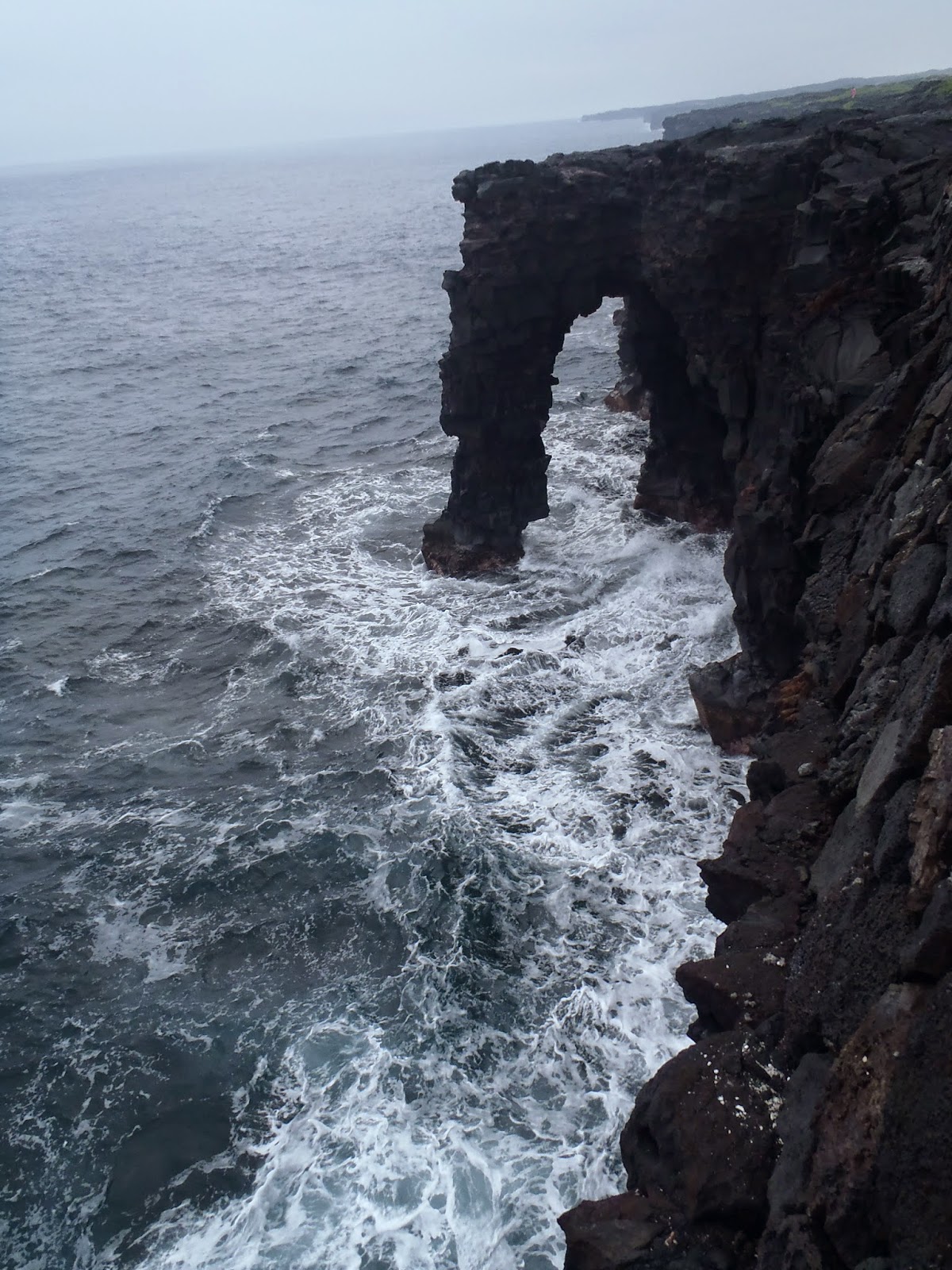 The sea arch was impressive... if you've never seen a sea arch before. We've had our fill over the last few years so we didn't stay long. 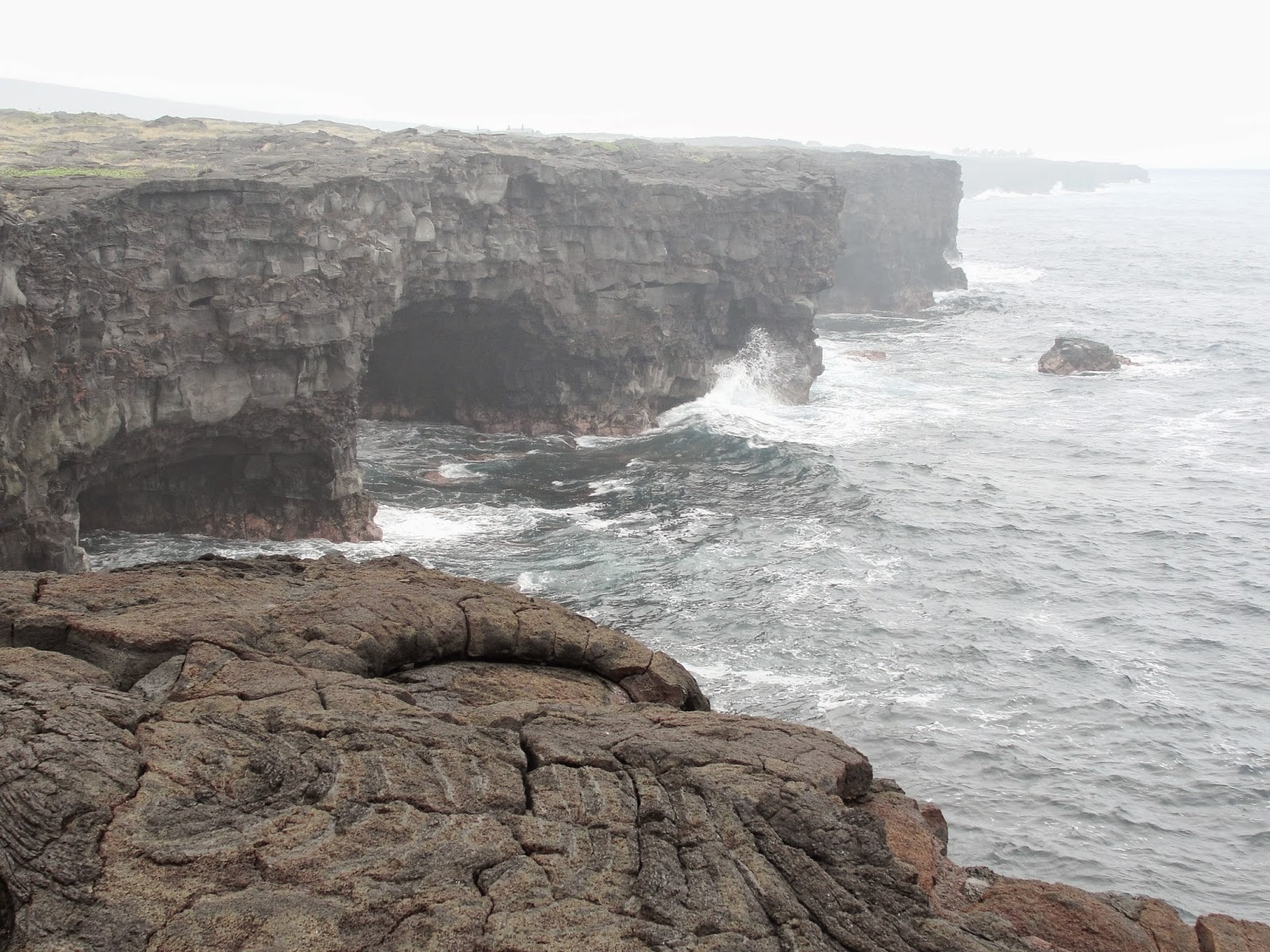 the sea-carved caves by the arch lookout were cool though

Day One, 4:30pm: we stopped at a few more viewpoints on the way up, then hiked the quick 1-mile-return Devastation Trail to see Pu'u Pua'i (formed in 1959 by the highest recorded lava foundation eruption in Kilauea's history) and called it a day. 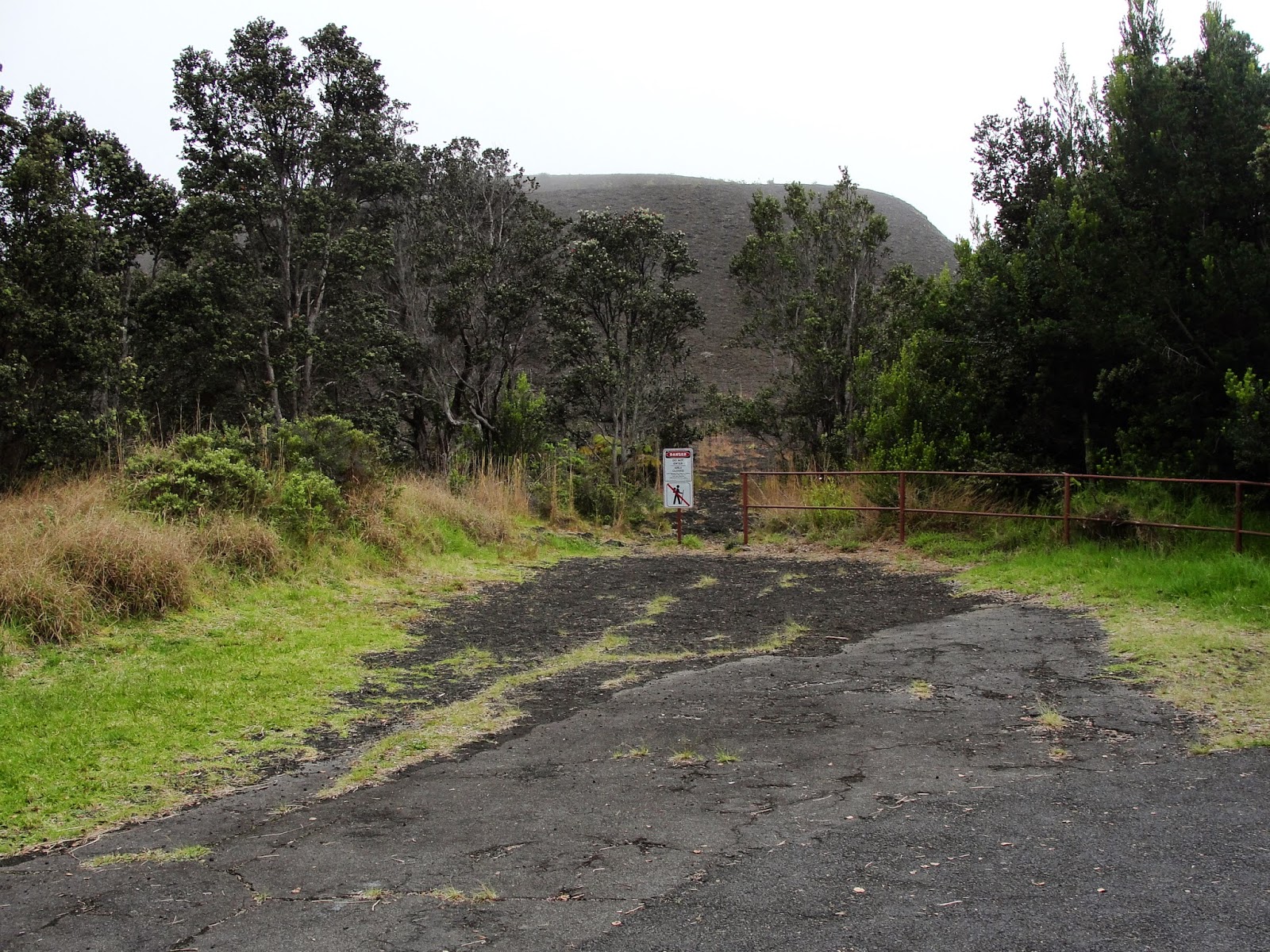 the hill in the background = Pu'u Pua'i

Day Two, 8:00am: we headed straight for the Kilauea Iki trailhead and descended through lush rainforest into the Kilauea Iki lava lake, formed in 1959. (This is one of the most popular trails in the park but we got there early enough that we only started to see crowds as we were nearing the end.) 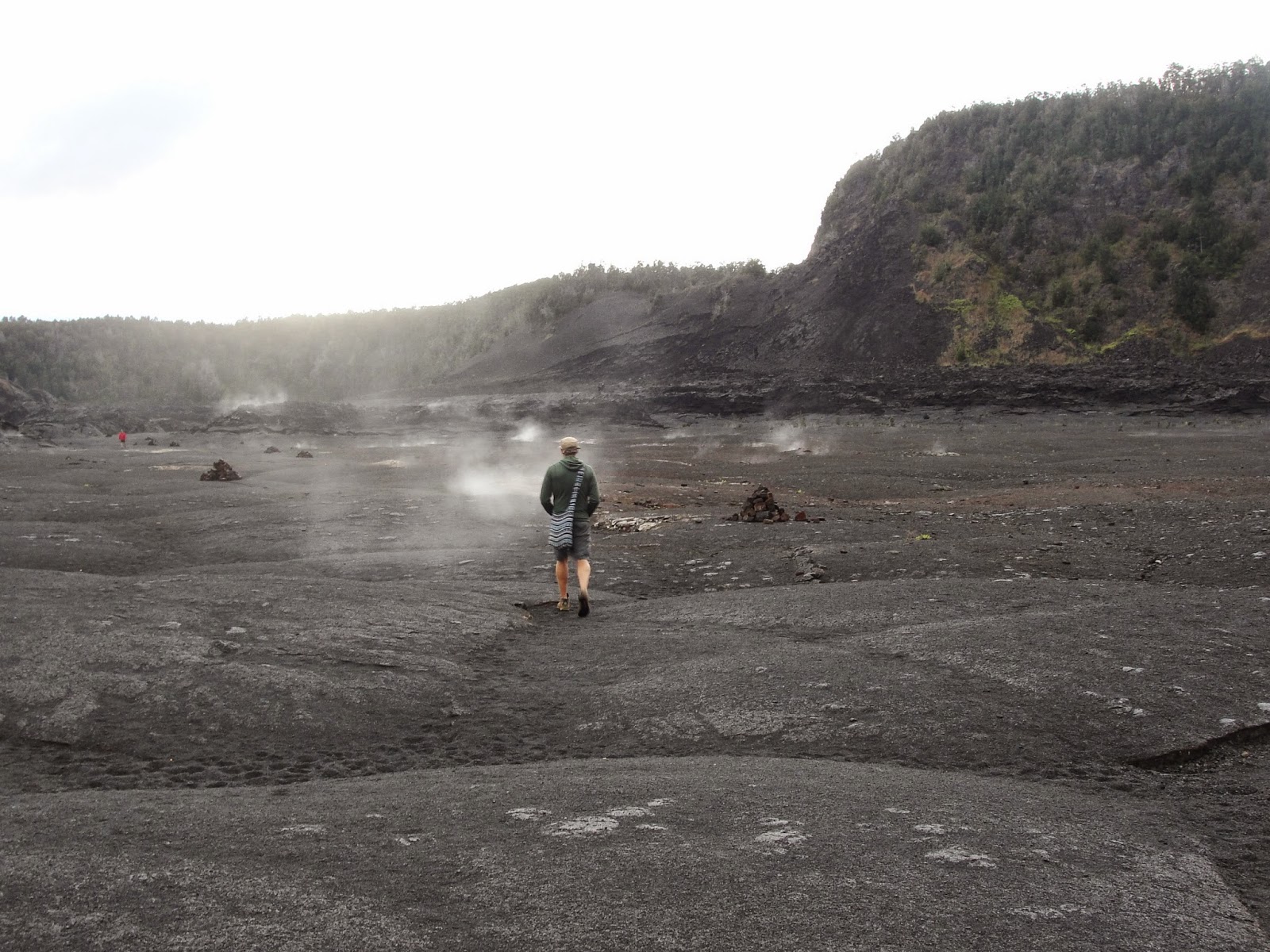 still steaming after all these years 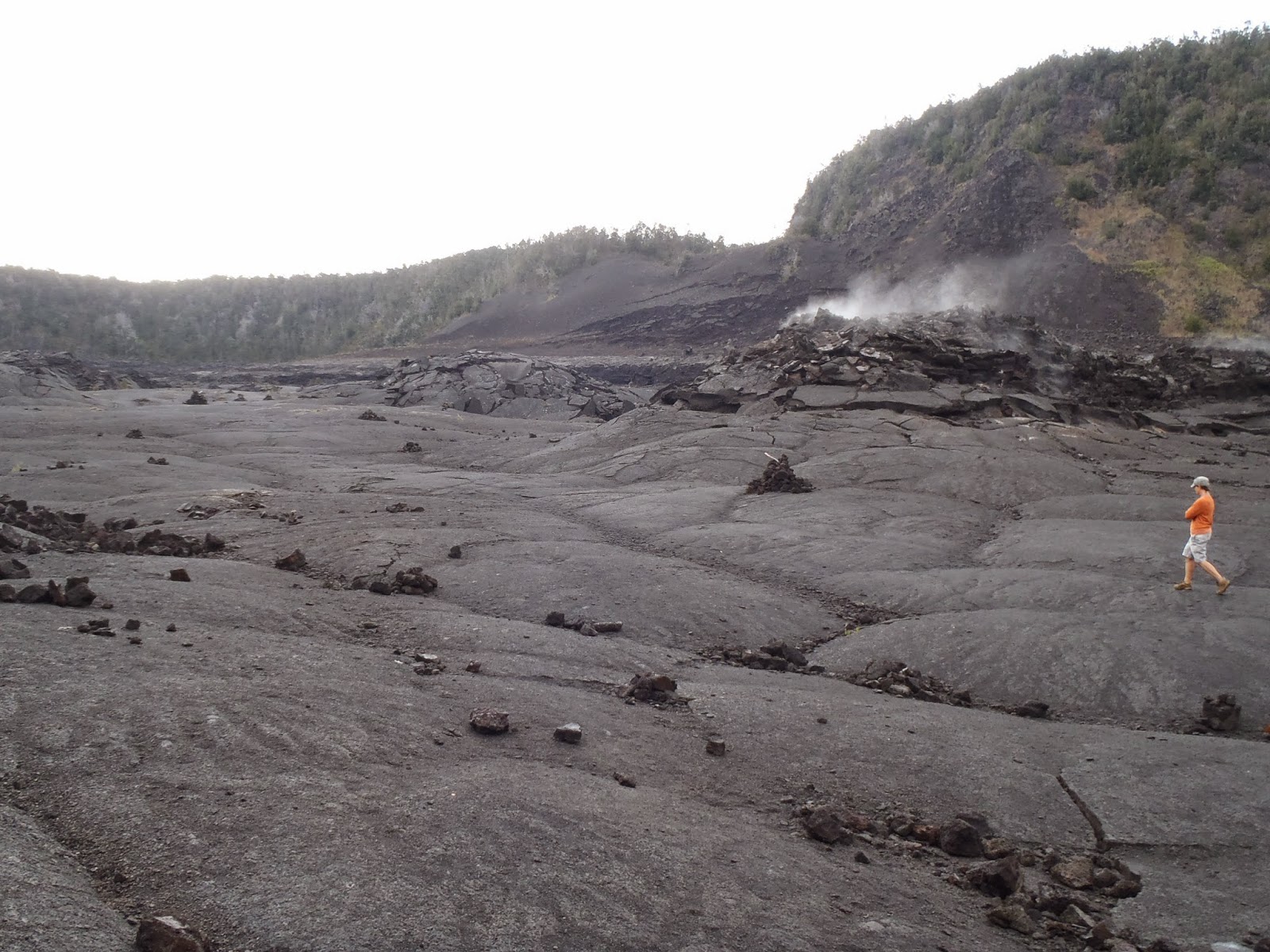 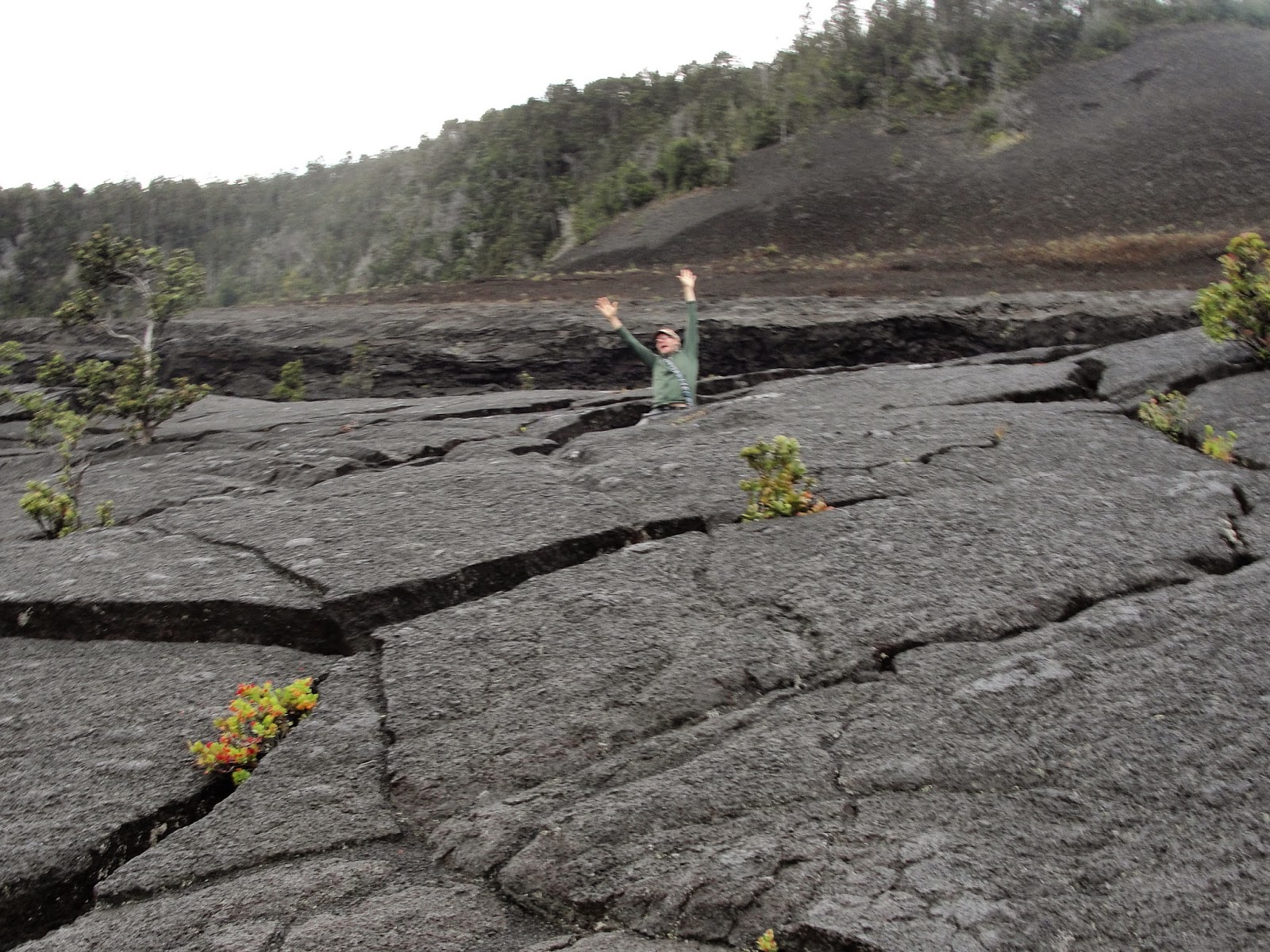 I said mind the gap! 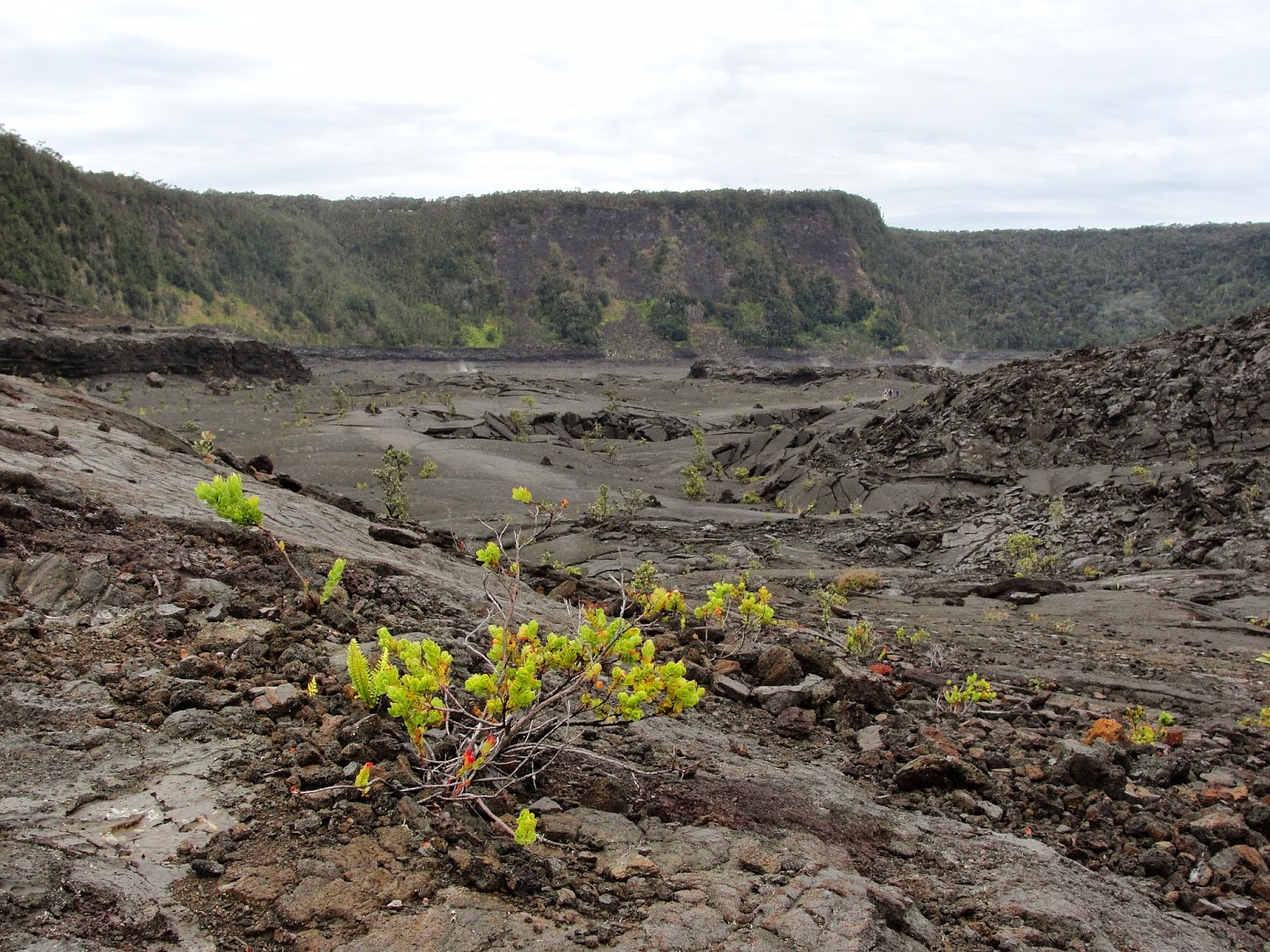 Day Two, 9:45am: we took a stroll along the Byron Ledge Trail and admired the ginormous fiddleheads. (The pulu - also known as "golden wool" - keeps the plants from drying out; soft pulu can also be used as a dressing for wounds.) 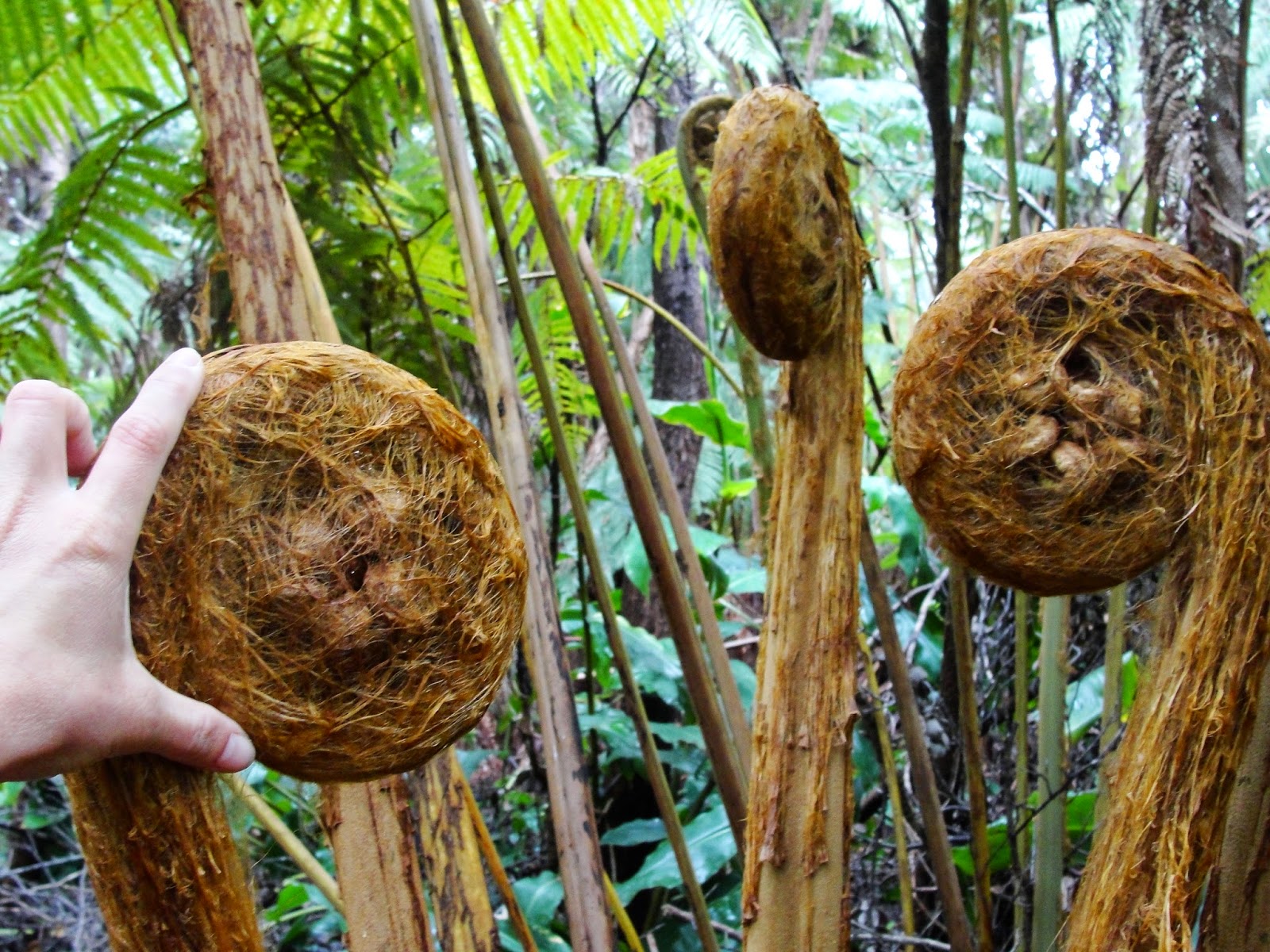 but can you eat them?


Then we returned to the trailhead parking lot via Crater Rim Trail and stopped a hundred billion times for photo ops of Kilauea Caldera and Kilauea Iki Crater. 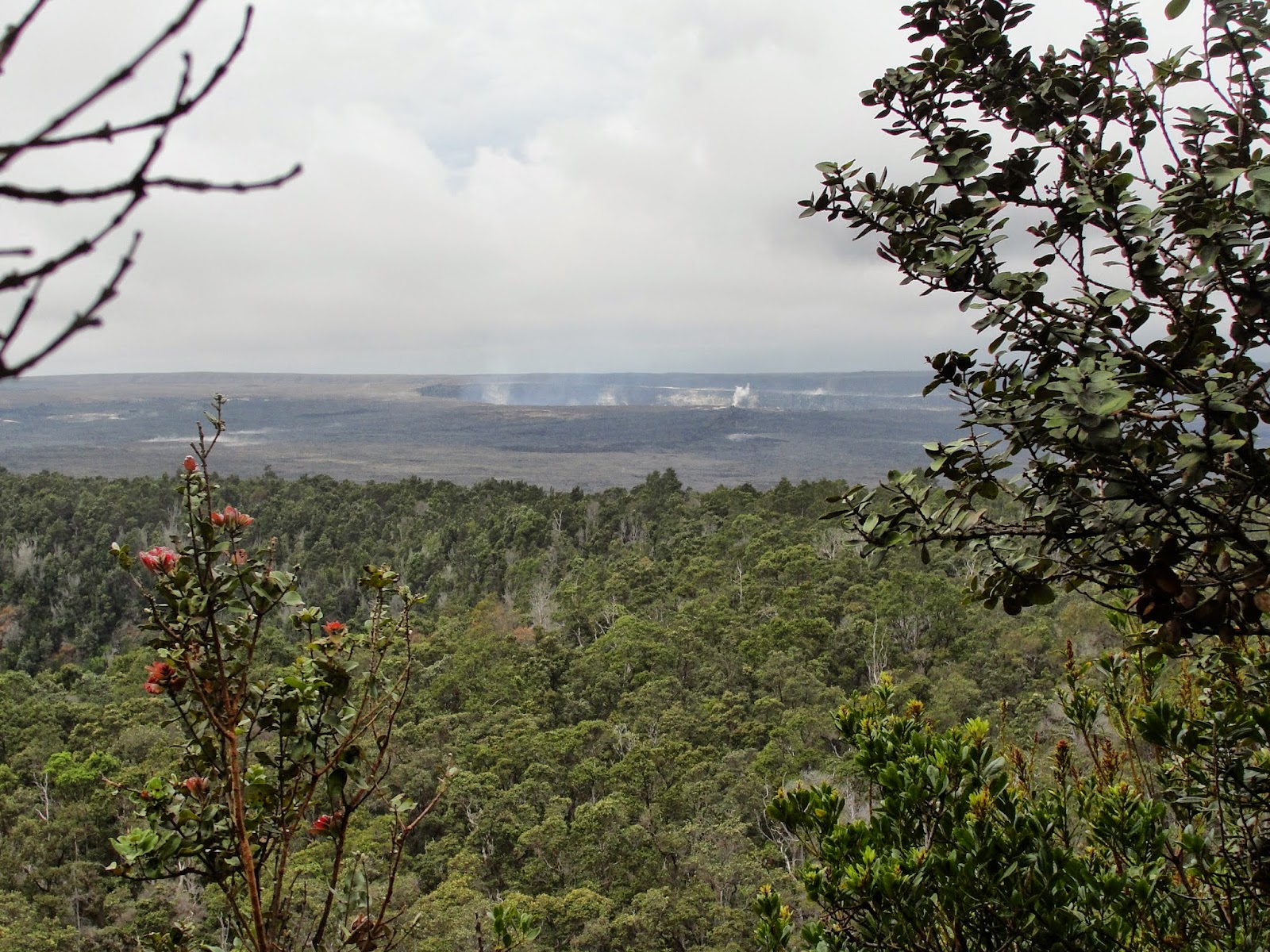 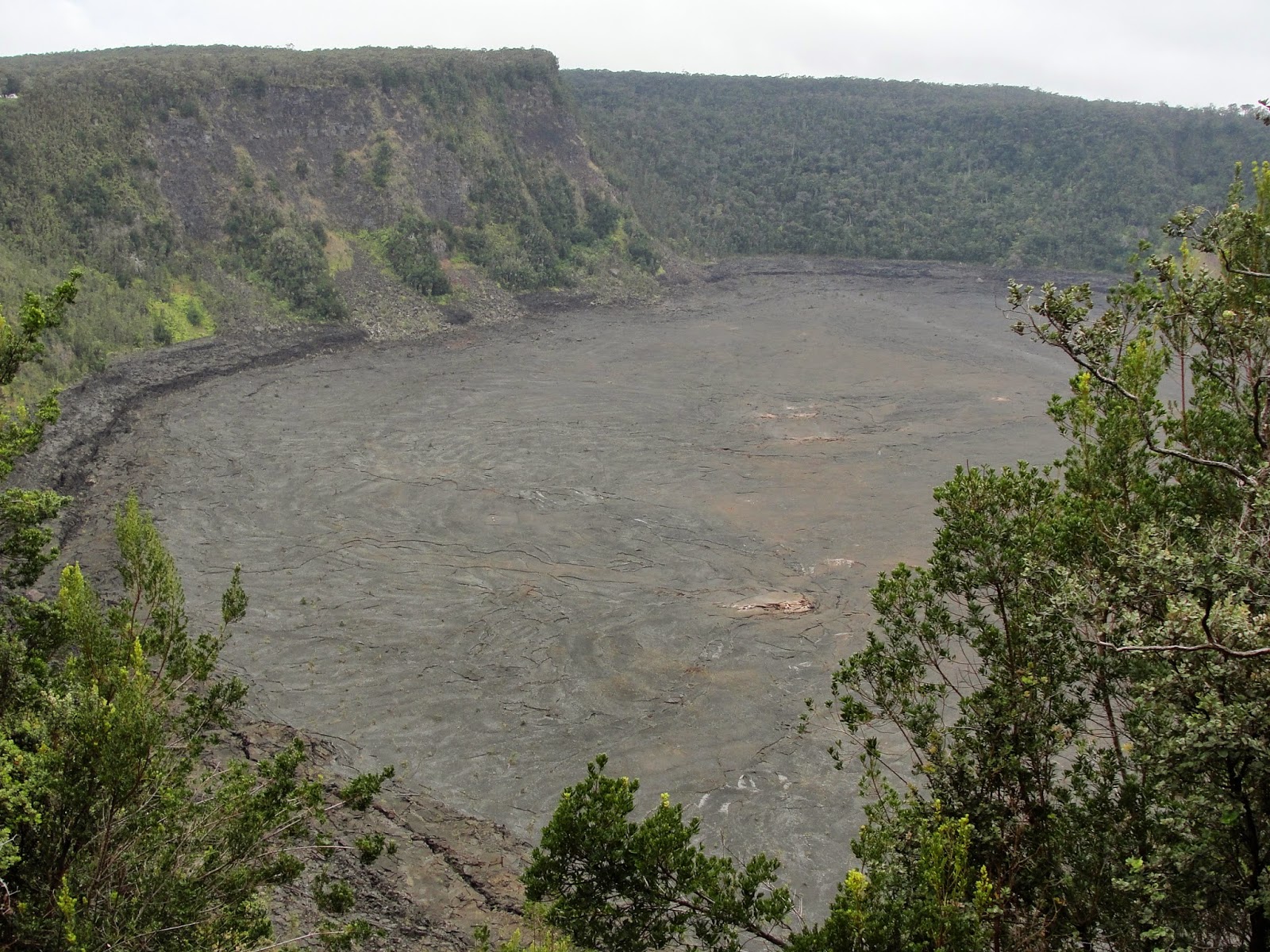 Day Two, 11:00am: we walked through the Thurston Lava Tube. (It's pretty dark so our pictures didn't turn out, and this is one spot everyone definitely visits, but you kinda have to do it.)

Day Two, 11:45am: we stopped back by the visitor center for a picnic lunch, then went inside to watch the two free 20-minute movies. One was a little cheesy but it gave some insight into some of the native beliefs about island gods/goddesses and respect for the land. The other gave an update on the Pu'u O'o lava flow, currently inching its way toward Pahao.

Day Two, 1:00pm: we took a break from the hoardes of tour buses and schoolchildren by visiting Kipukapuaulu across the highway. This "hot spot of biological diversity" has more native tree species per acre than any other forest in the park. It also supposedly has tons of birds and butterflies, but the day was pretty cold and overcast so we didn't see much wildlife at all. (We also drove up to the Mauna Loa lookout but there was absolutely no view... bet it's great on a clear day though!) 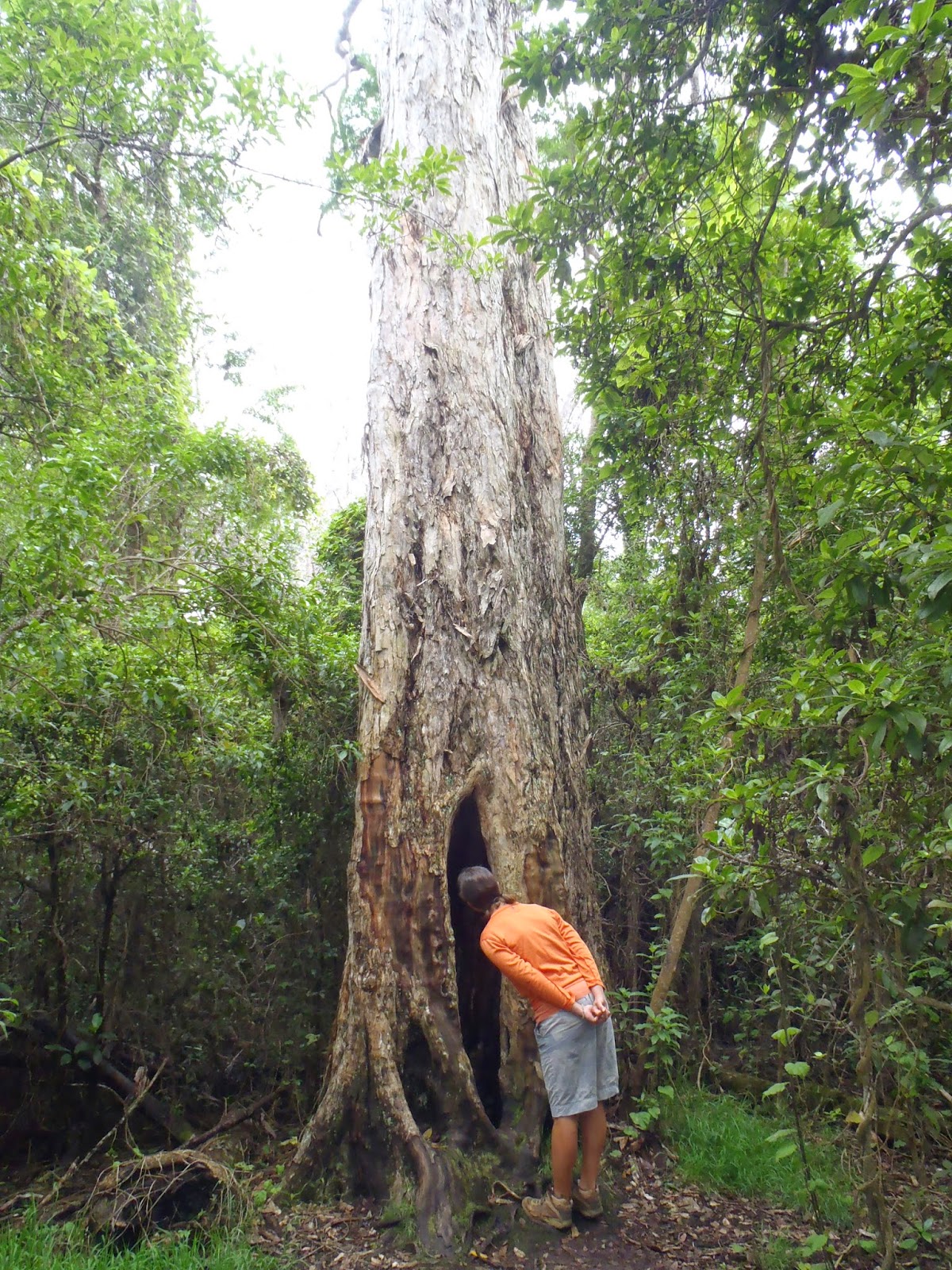 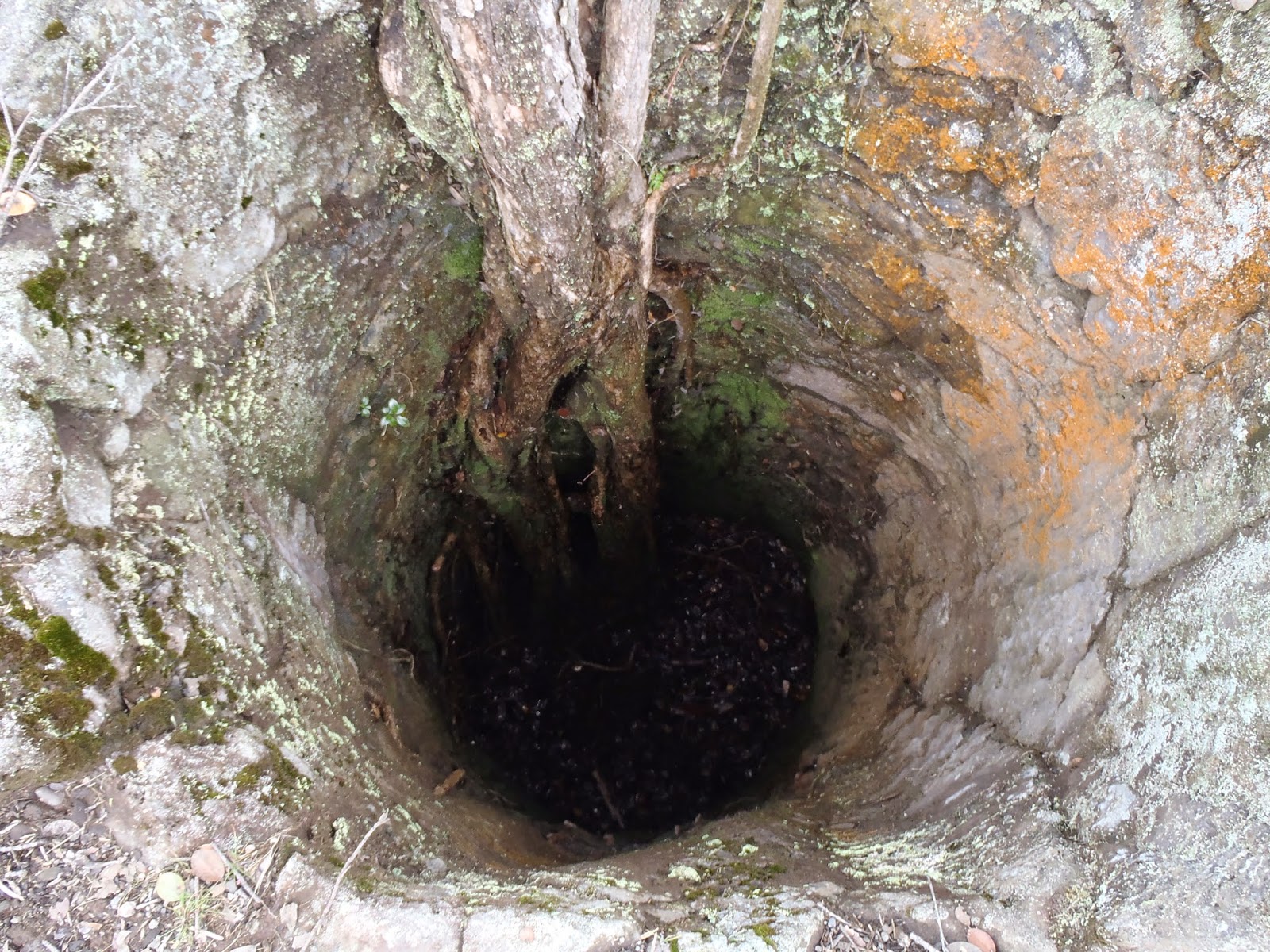 Day Two, 4:00pm: we headed back into the park and stopped by the "steaming bluffs" on the way to Jagger Museum. 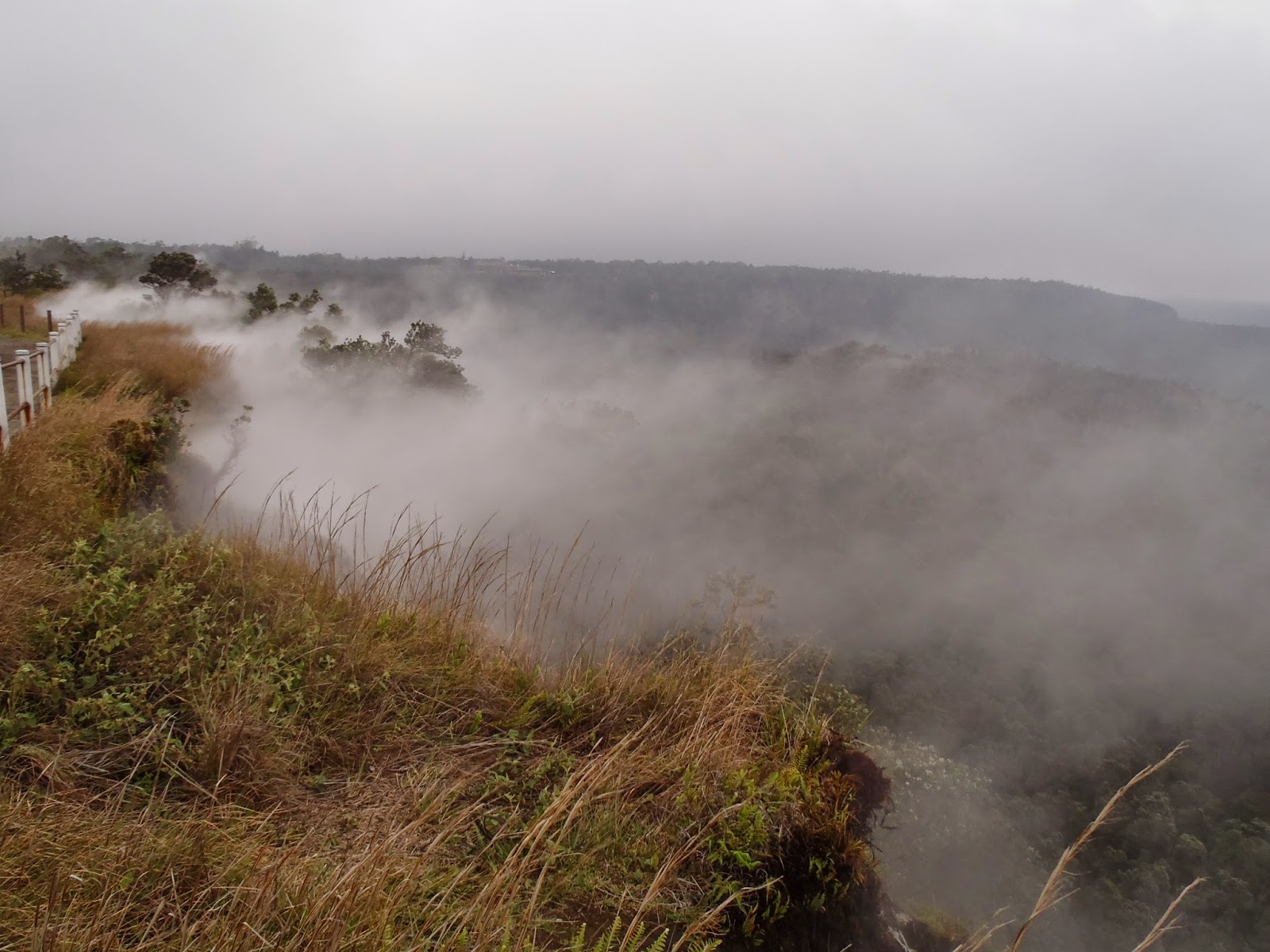 After checking out the museum we ate a picnic dinner, then claimed our spot for the big show... 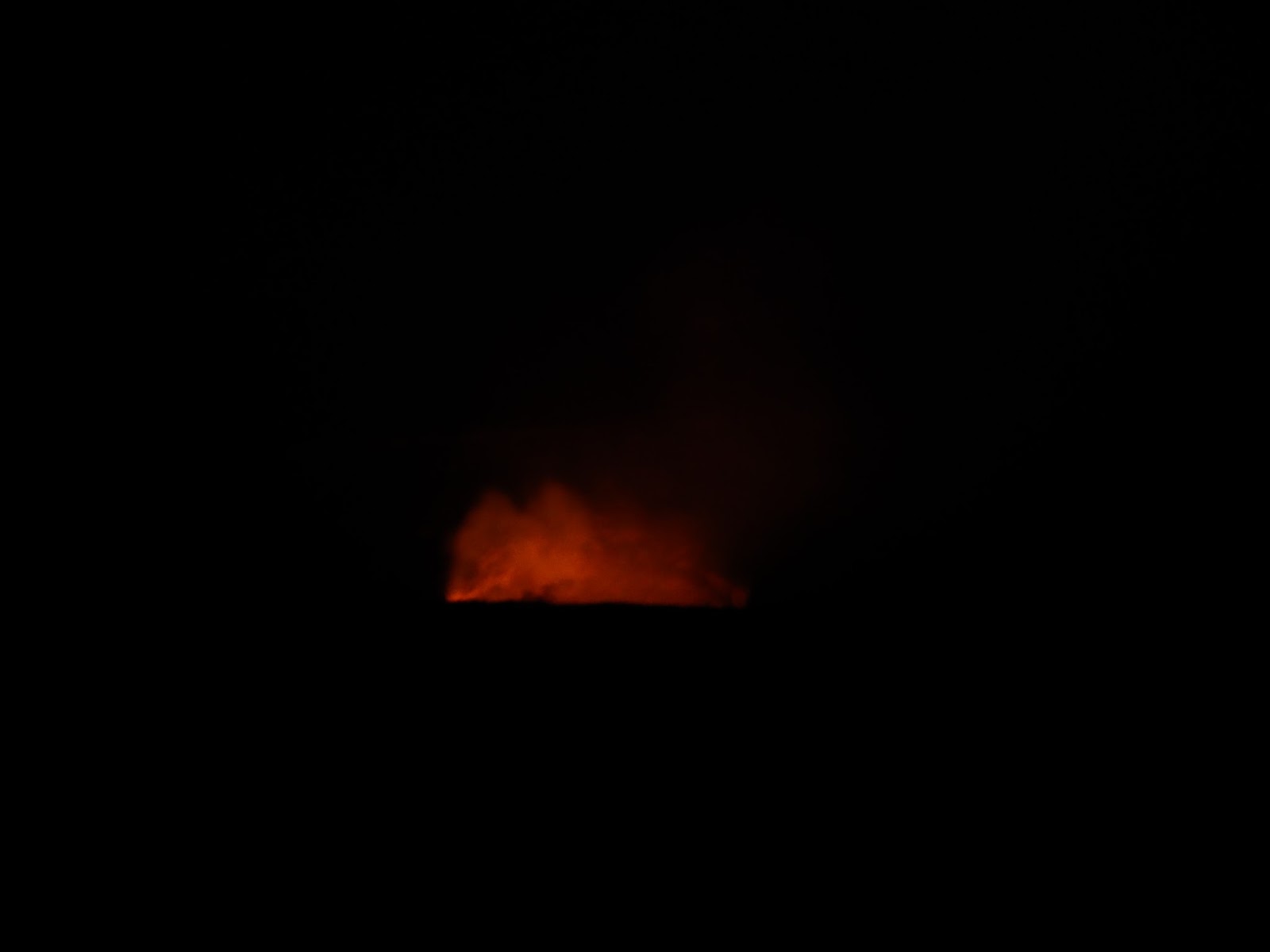 take a really good camera and a tripod

So glad we stuck around to watch the evening glow. We hung out next to some 7-year-olds who were thankfully not playing Frogger, and I was pretty amused to listen to their amazed questions and comments about the park and the lava glow.

So there you have it, two jam-packed days and no regrets. Are you ready to hop on that plane yet? 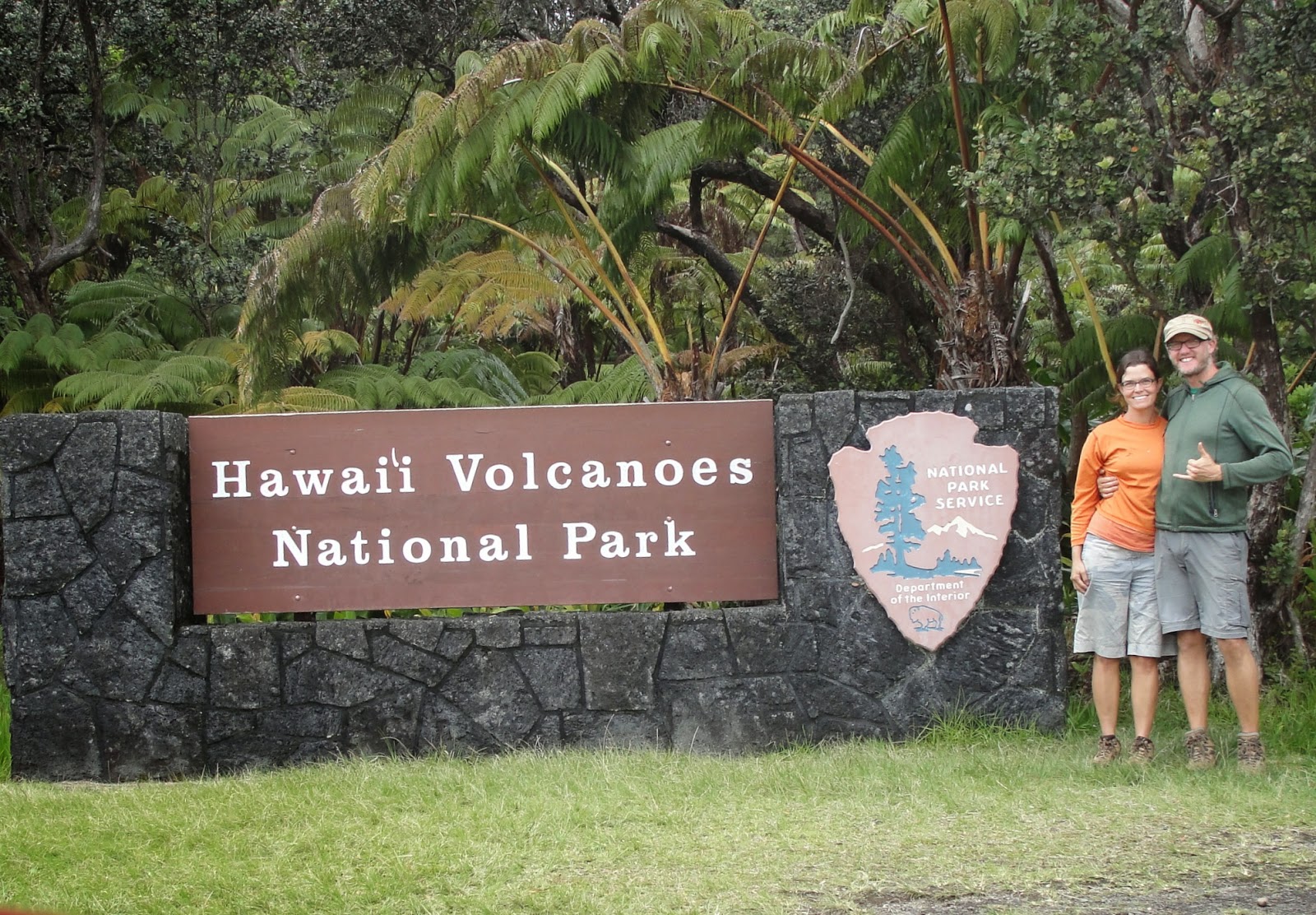 
Really looking forward to our road trip to see if any of the mainland parks come close to topping this one...
Posted by Jen
Email ThisBlogThis!Share to TwitterShare to FacebookShare to Pinterest
Labels: hawaii, united states, us national parks