On not drinking nearly enough coffee in Buôn Ma Thuột.

From Dalat we headed north on Crazy Bus Ride #1 through the Central Highlands to Buôn Ma Thuột ("boon ma tote"). We wanted to see as much of the central area as possible and then we heard that BMT was the coffee capital of Vietnam... Well, as you can imagine, that sealed the deal.

BMT is definitely off the routine tourist track and we got lots of curious stares and friendly "hello!"s as we wandered through town. (And we did a LOT of wandering - Google maps and BMT are not exactly friends yet, or maybe we were just map-inept or interpreting addresses wrong, but our hotel was shown in a completely different neighborhood than its actual location.  And when we tried to find the ethnographic museum we ended up in farmland in the outskirts of town. Some helpful kids pointed us in the right direction after we realized we were going nowhere - and from their reaction it seemed we weren't the only occasional tourists to have made that mistake.)

But in our lost moments we found a tree with what sounded like a million cicadas. 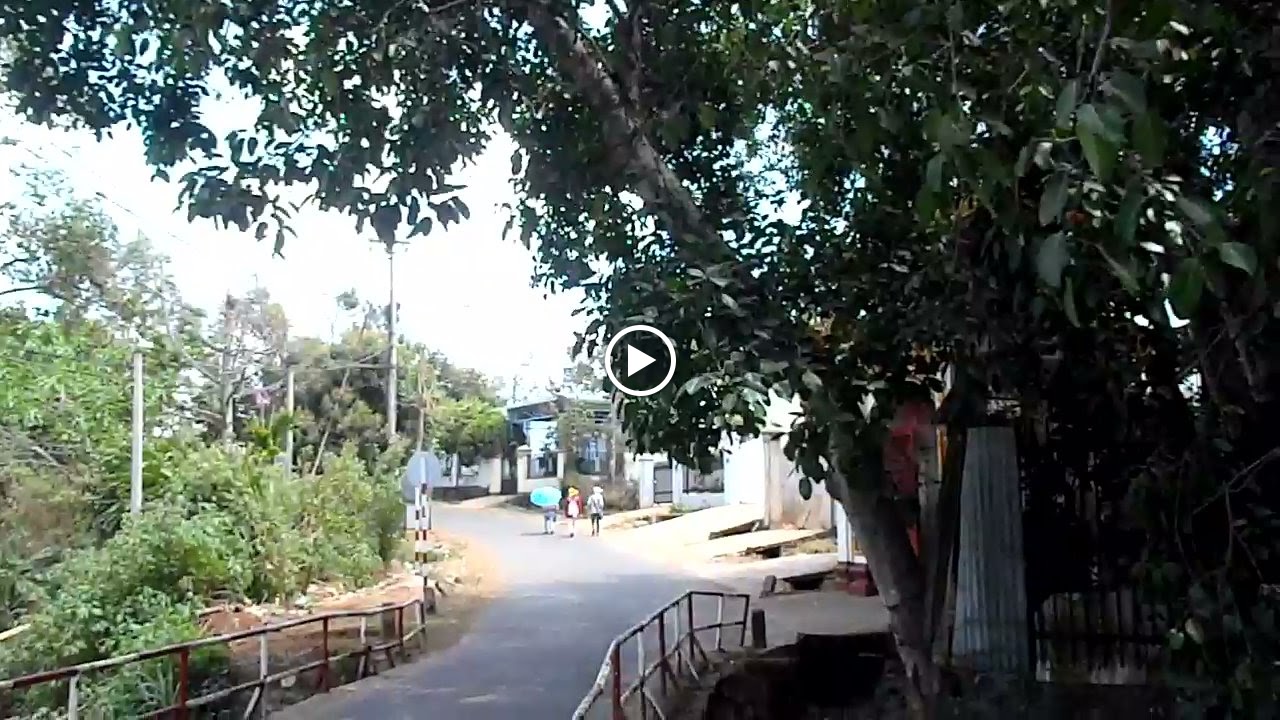 getting lost is sometimes a good thing

There are minority villages available for tours just outside of BMT but after discussing this, we decided not to visit. It just felt too voyeuristic and intrusive. Had we been going with a purpose, like to help on the farms or to learn a craft, or even if we planned to stay for more than an hour or two, it would've been different, but going just for tourism was too weird. (This is also why we headed east instead of continuing north after BMT as originally planned. The two main stops north of BMT are fairly untouched other than by tourists wishing to see ethnic villages.)

Instead, we took a quick walk through BMT's Ako Dhong village where stilt longhouses have been maintained... albeit in a suburban kind of way. 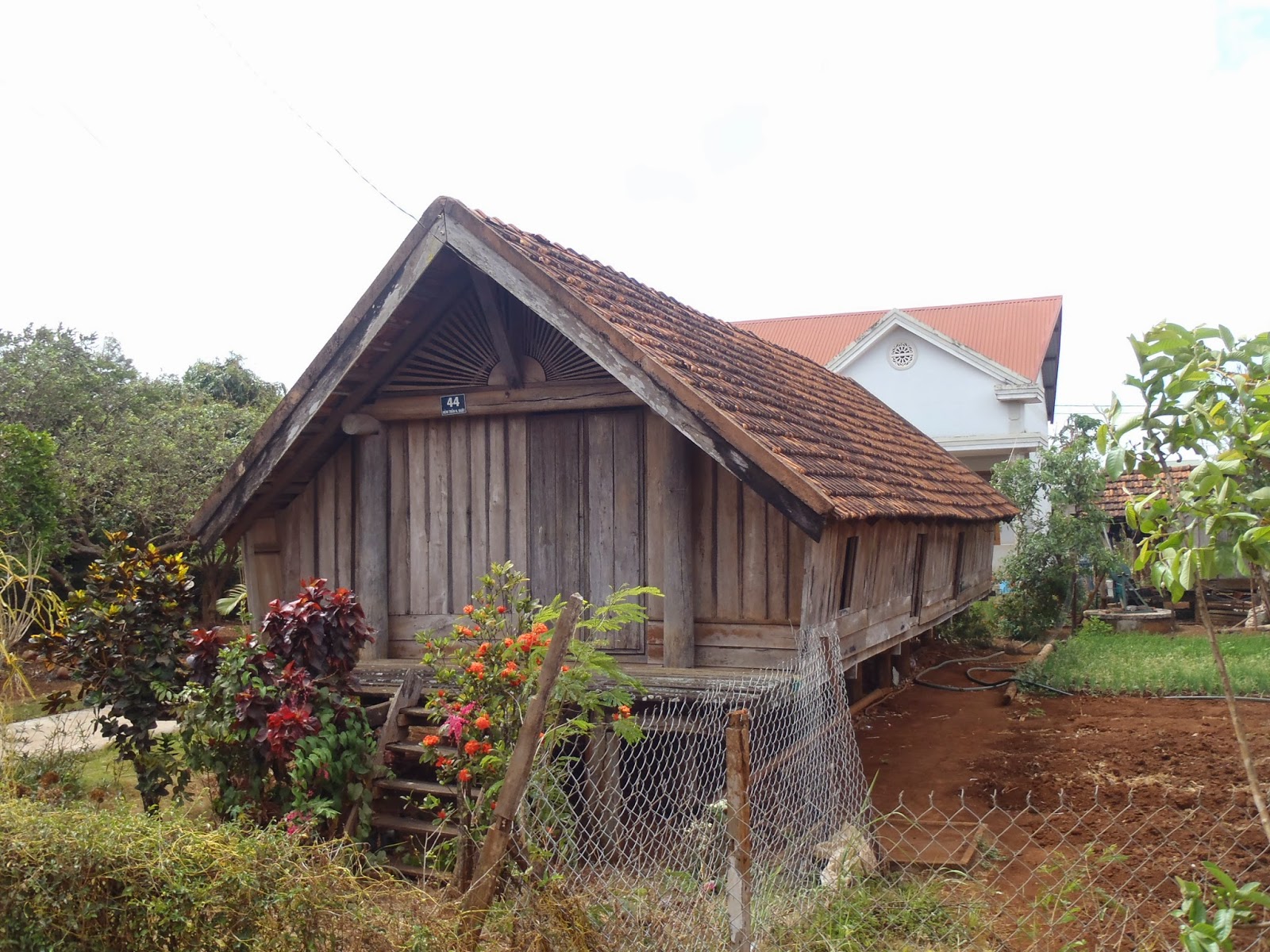 most have built newer housing behind the original long house

And then we visited the aforementioned ethnographic museum featuring really interesting exhibits and information on the local tribes. No life-sized dioramas, but you can't win 'em all. 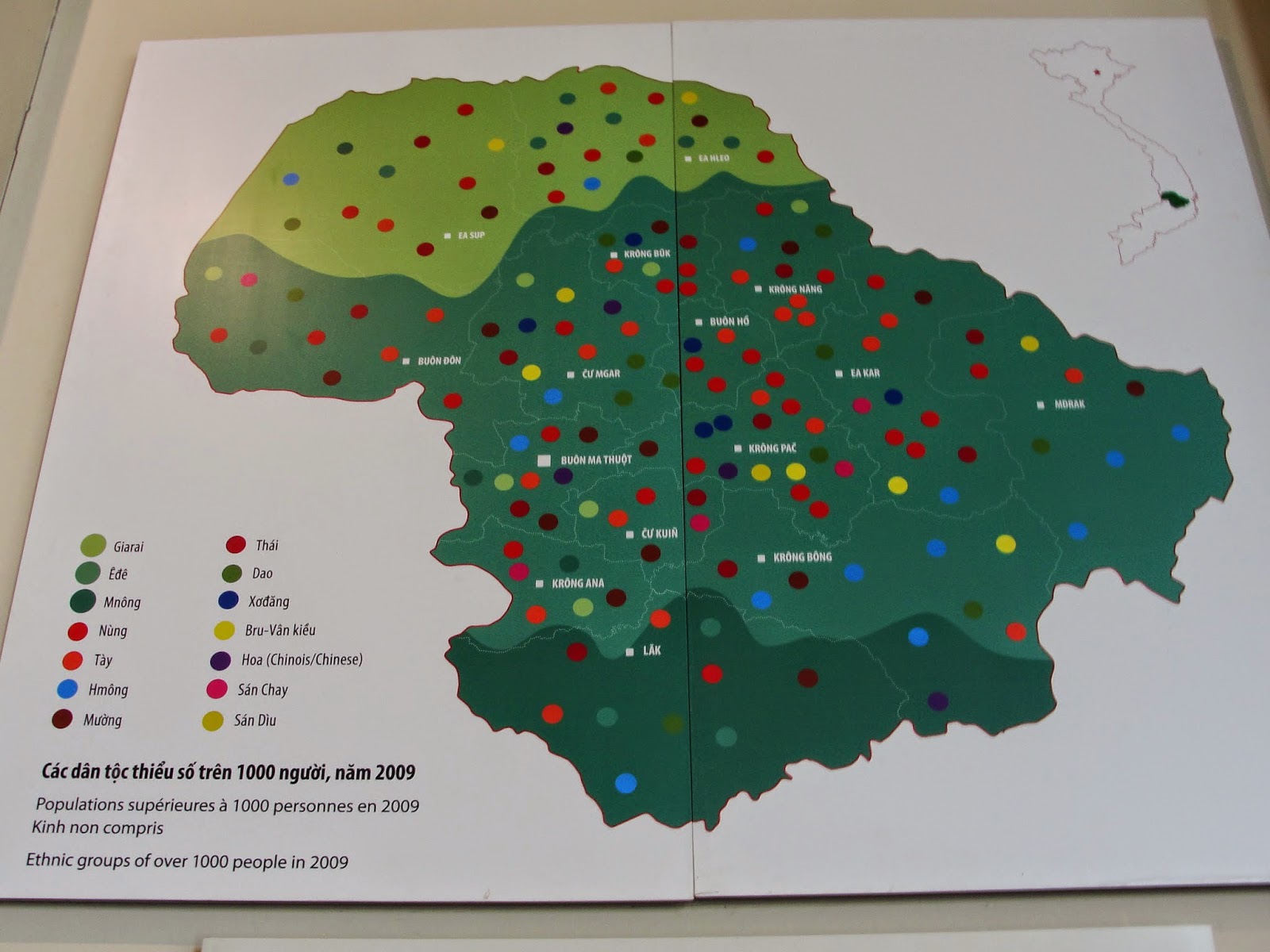 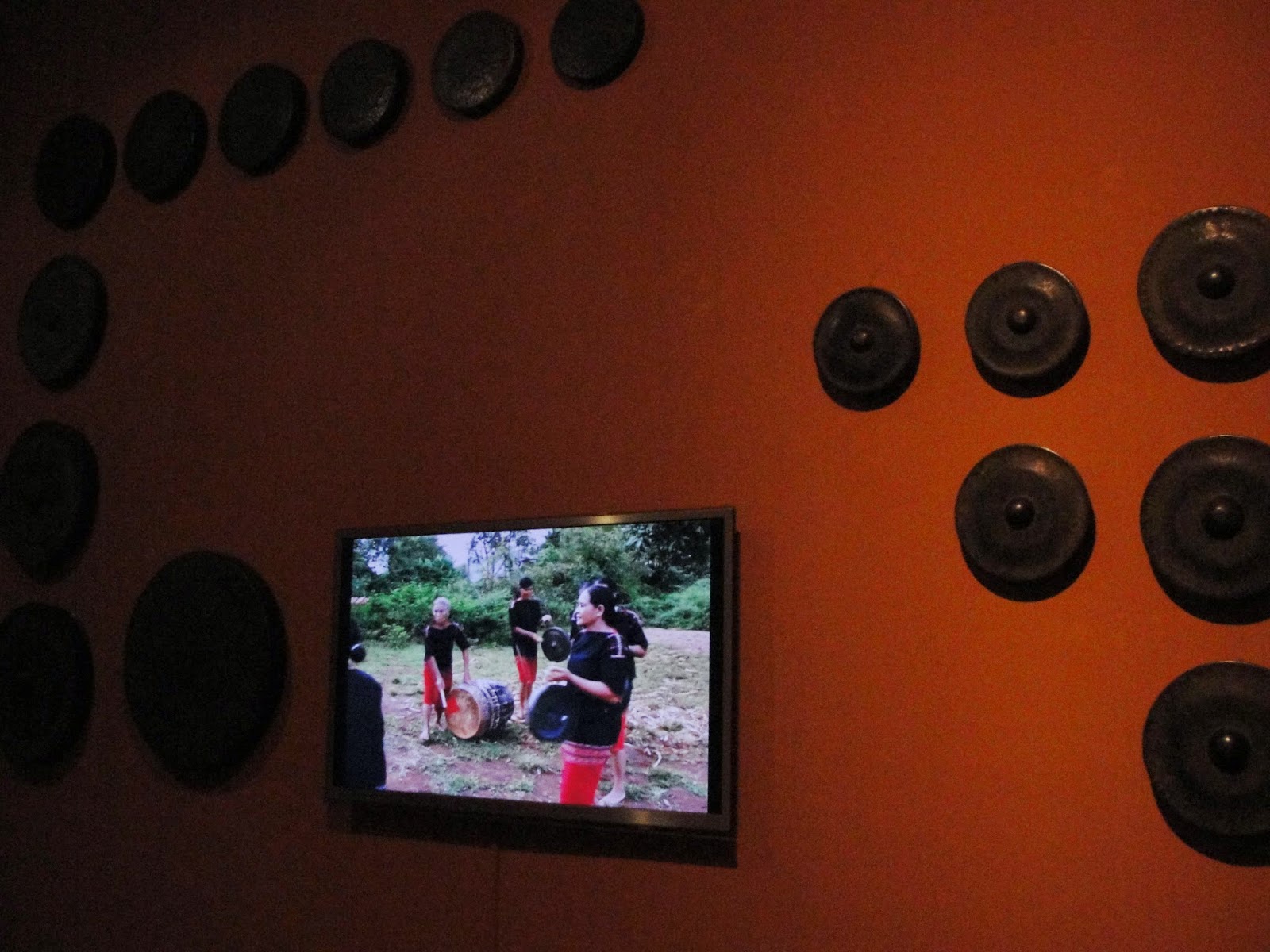 gongs play an important role in these cultures,
and even neater - women play the gongs 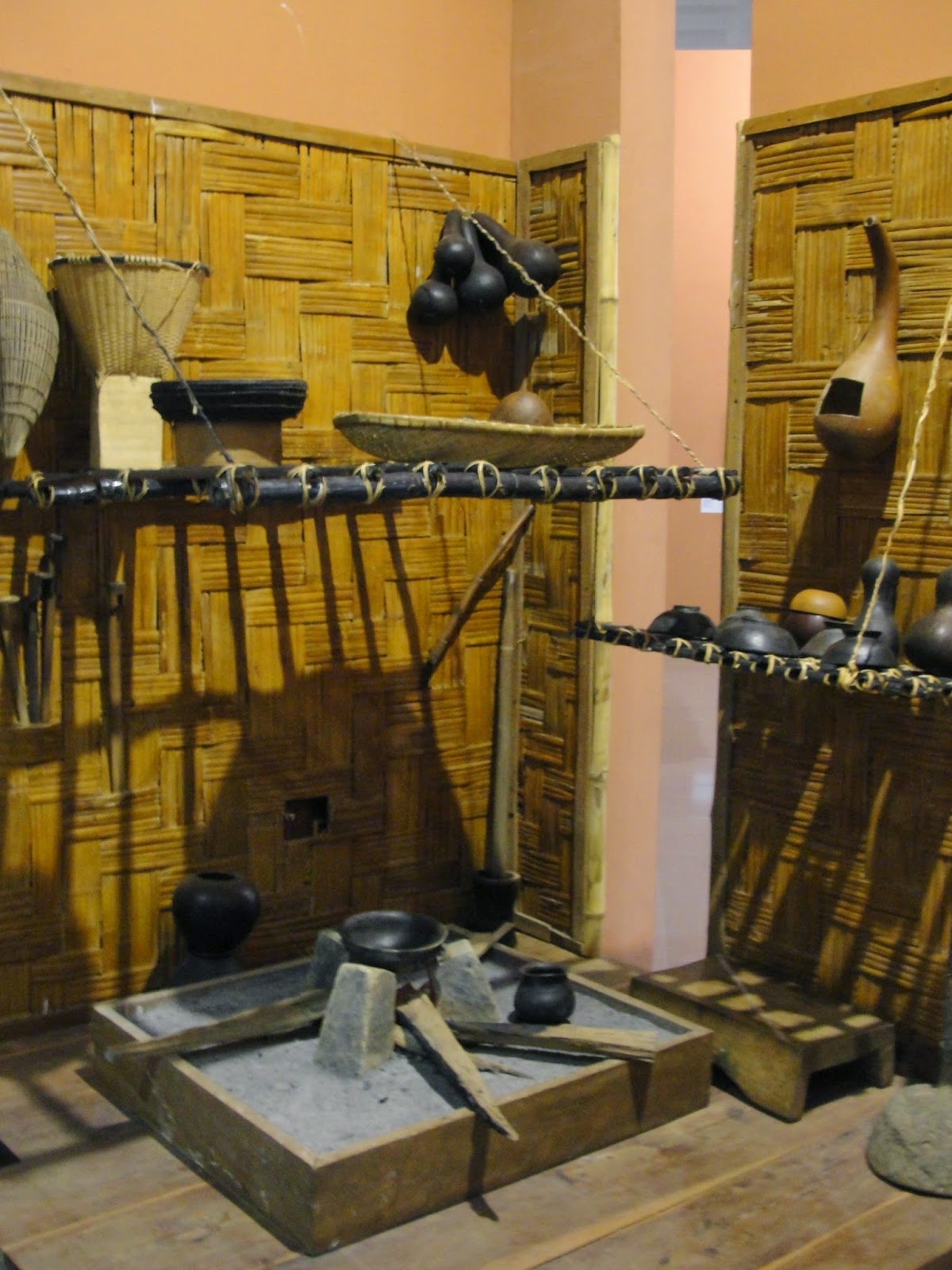 We think we learned more from the museum displays than we would have by visiting the local villages. The museum also had great exhibits about biodiversity in the central highlands (including coffee and pepper you could smell) and BMT during and after the "French" and "American" wars. It was definitely worth the time. 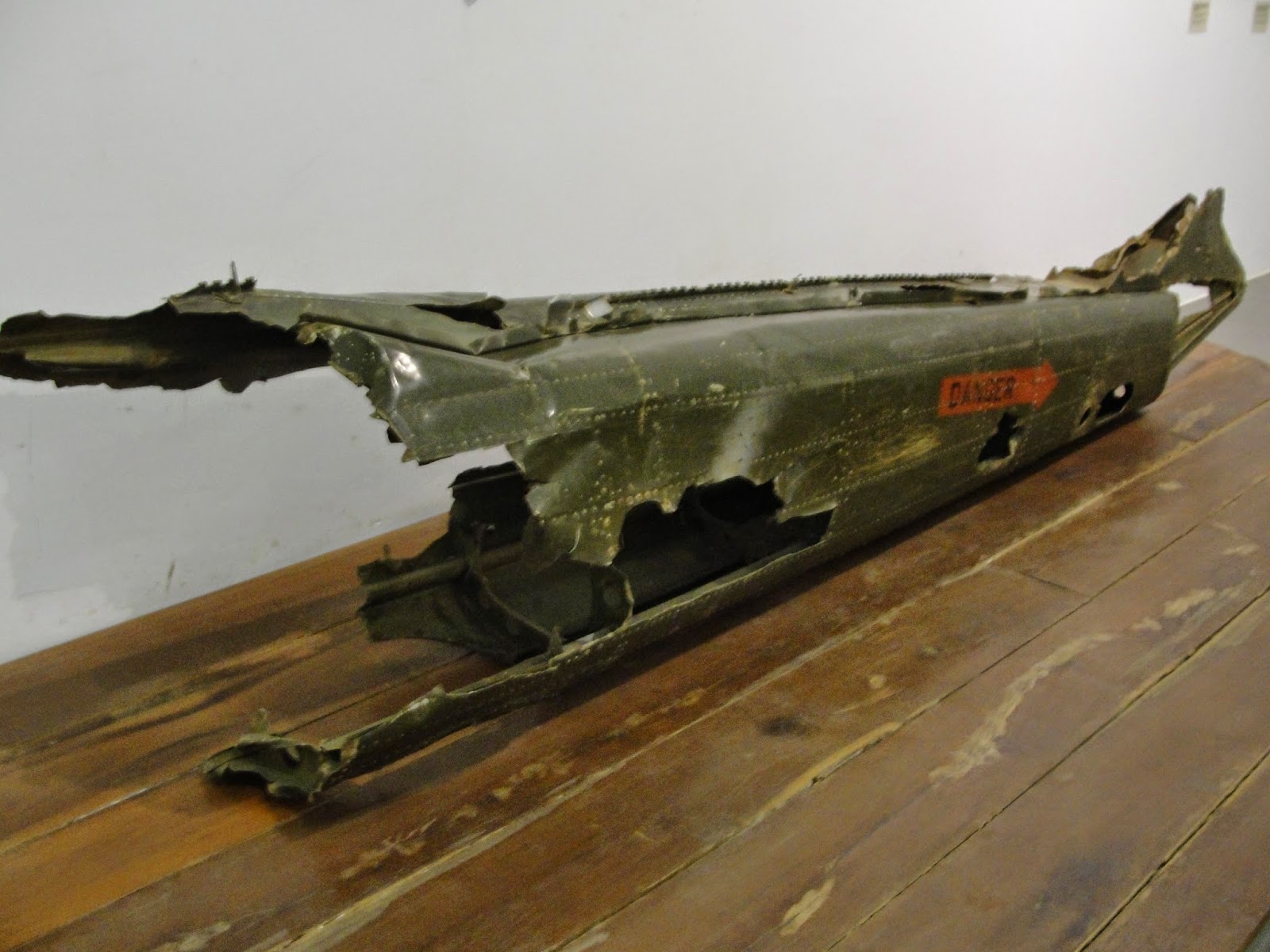 From war to peace...  BMT's Khai Doan pagoda is currently under construction but still beautiful. We got to watch a few guys carving and staining wood and a very nice elderly woman encouraged us to go upstairs even though it appeared to be closed off. (Buddhists are so welcoming this way!  During a future visit to another city's pagoda, a Buddhist man would offer Patrick a cigarette.  Neat!) 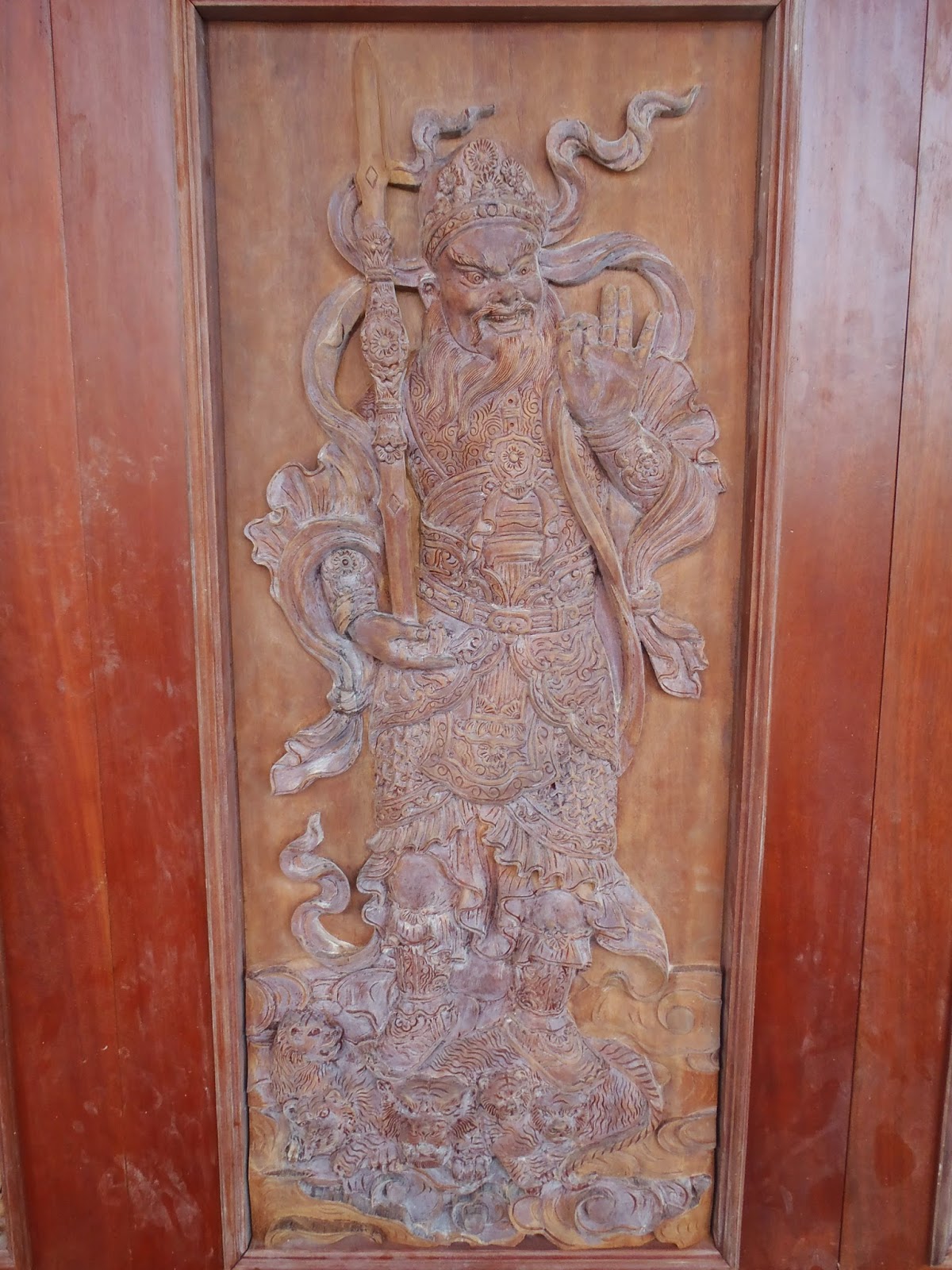 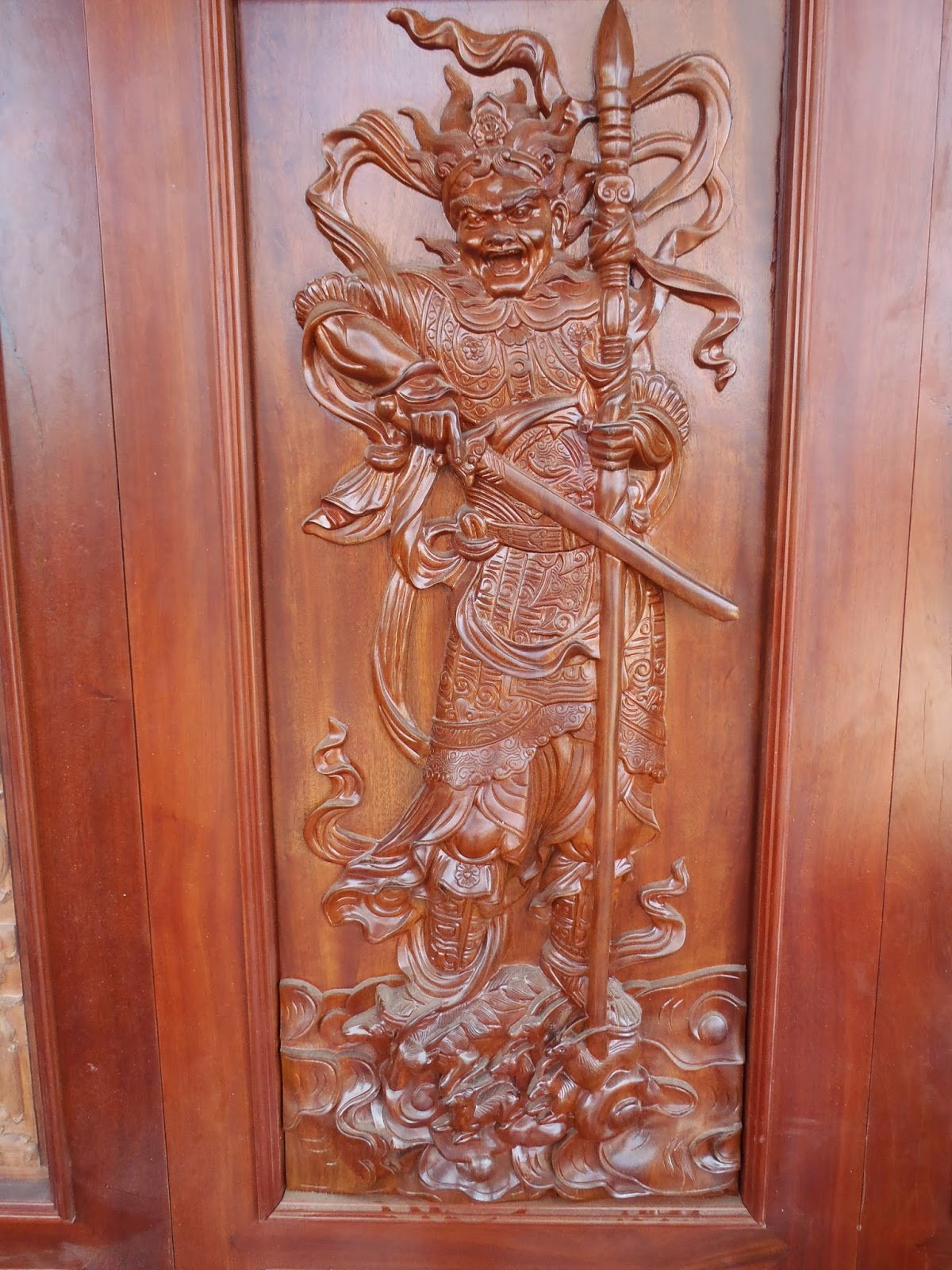 The next day we decided to try a DIY trip to Dray Sap and Dray Nur waterfalls about an hour outside BMT. And by "we" I really mean Patrick - I was pretty leery about this trip even though I really wanted to see the falls and I'd done the research on what seemed to be a straightforward bus ride. DIY in touristy Dalat was one thing, but going an hour out of town in BMT was more intimidating and as Patrick can attest, I wasn't really comfortable until we were on the bus headed home. 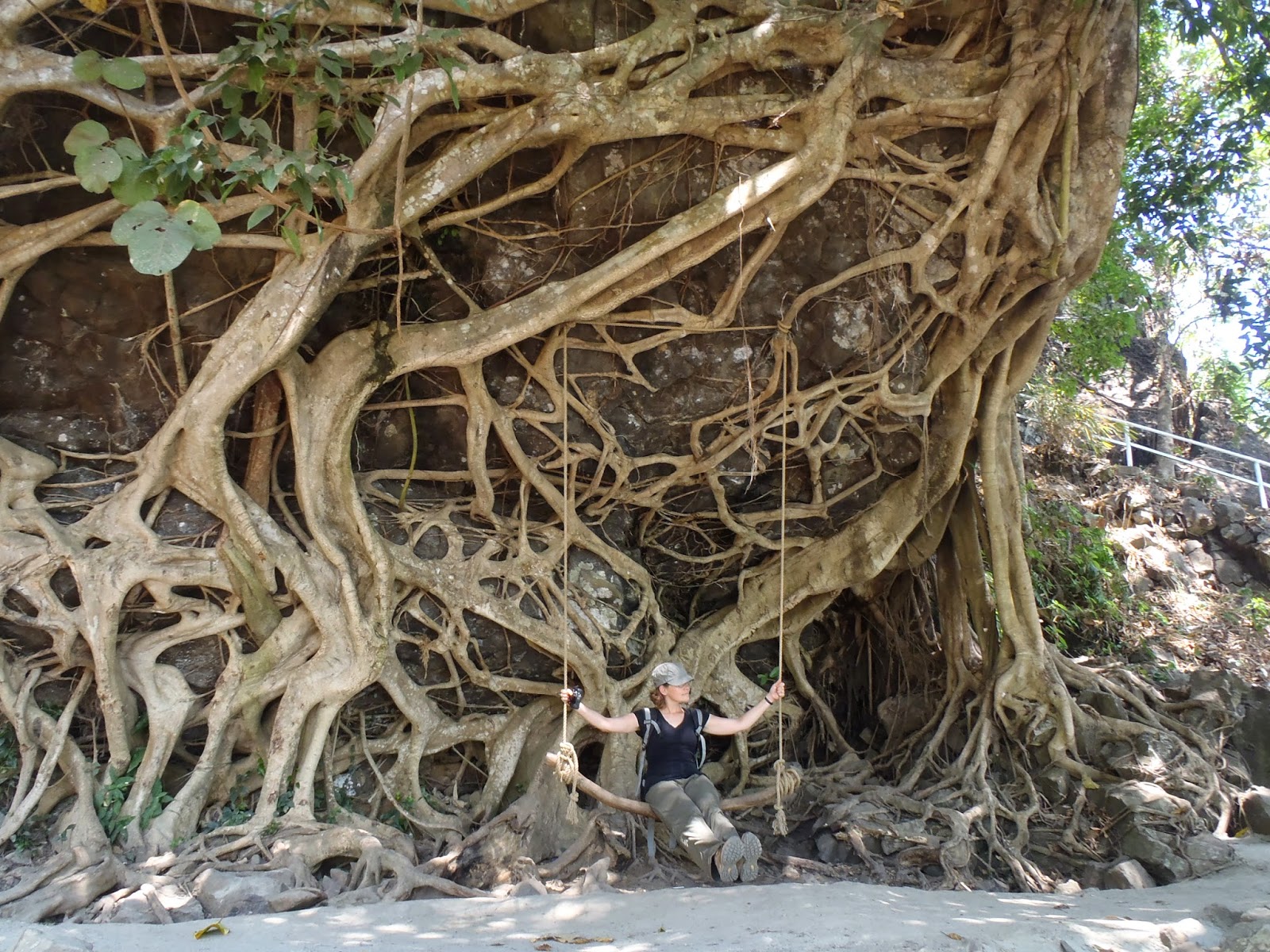 I still had fun though -
don't get me wrong

Very glad we did this trek. The motorcycle taxi guys at the bus station and the bus attendants were all helpful in getting us there and back (for the record, we took Bus #13 toward Krong No). Even in dry season and really hot weather, the falls were really nice and the butterflies and dragonflies were fun to watch. 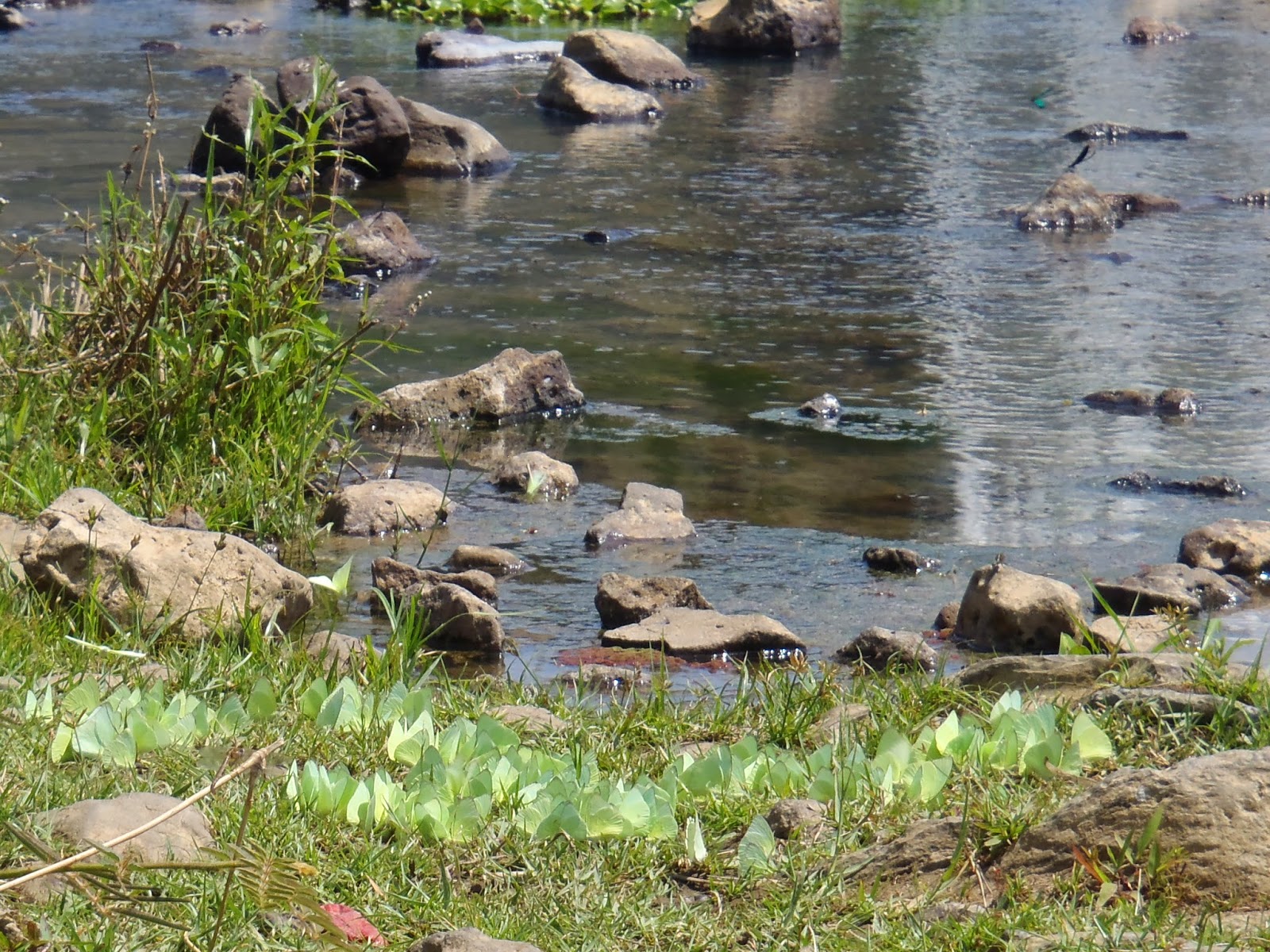 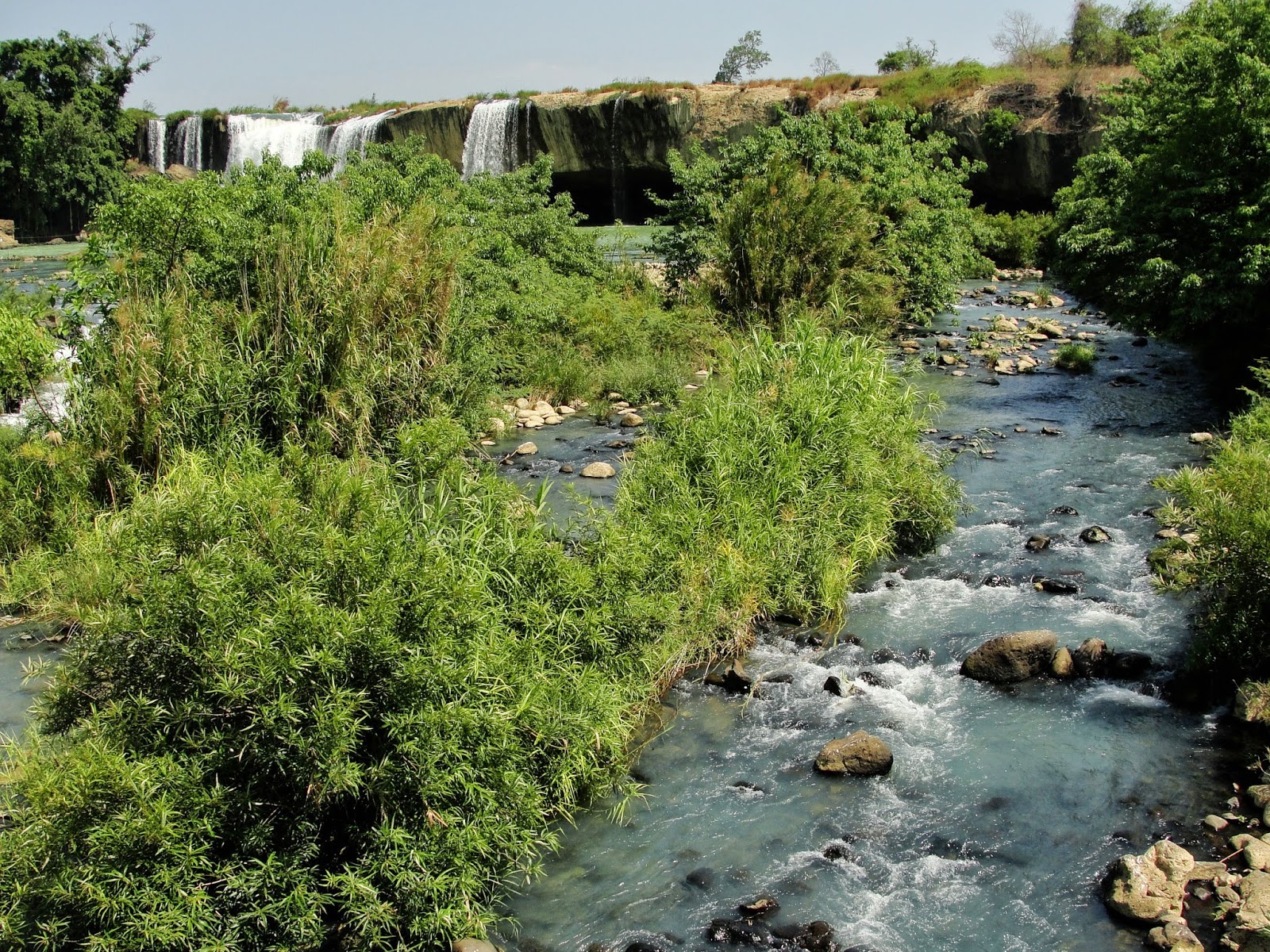 a river runs from it 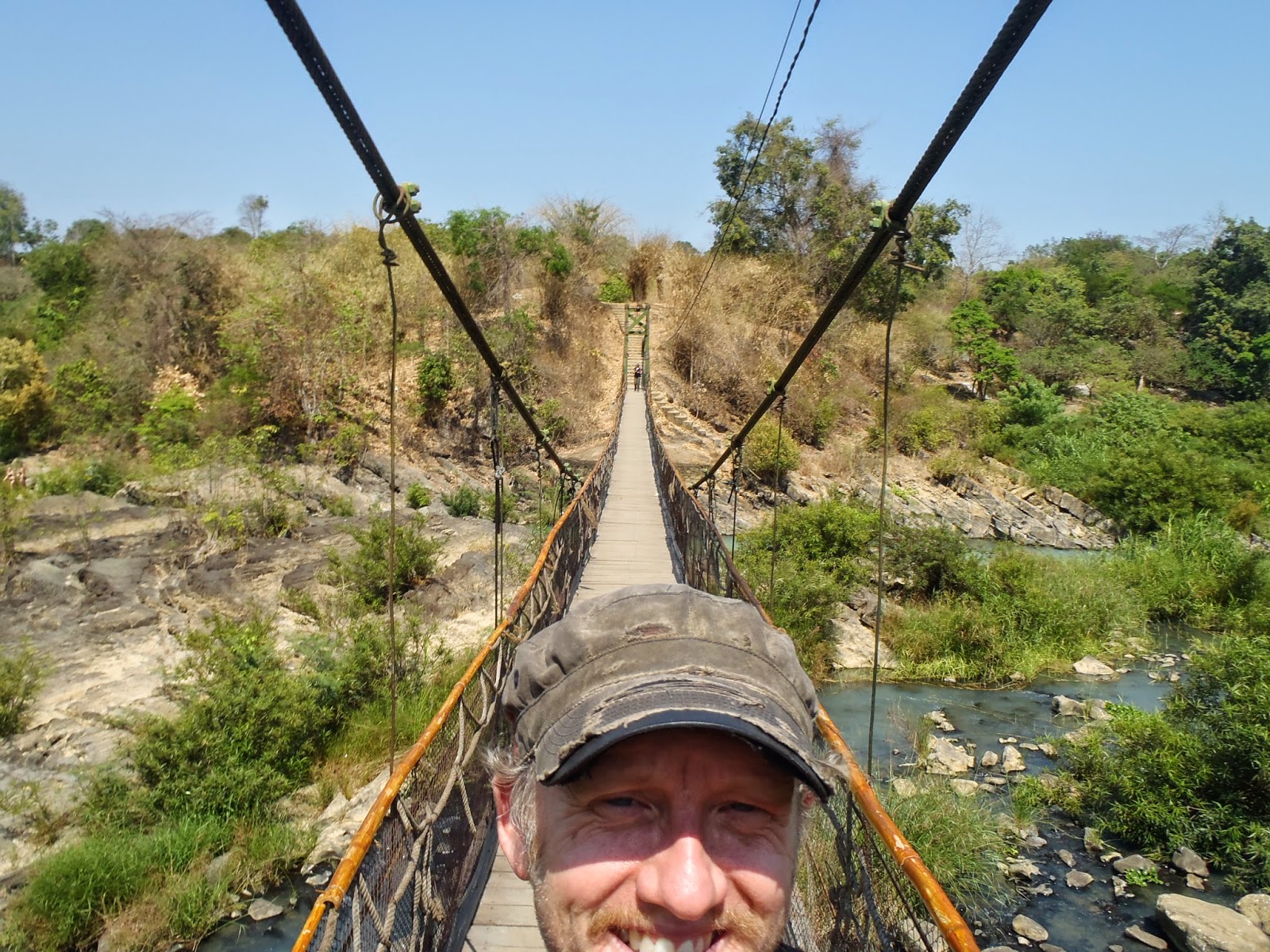 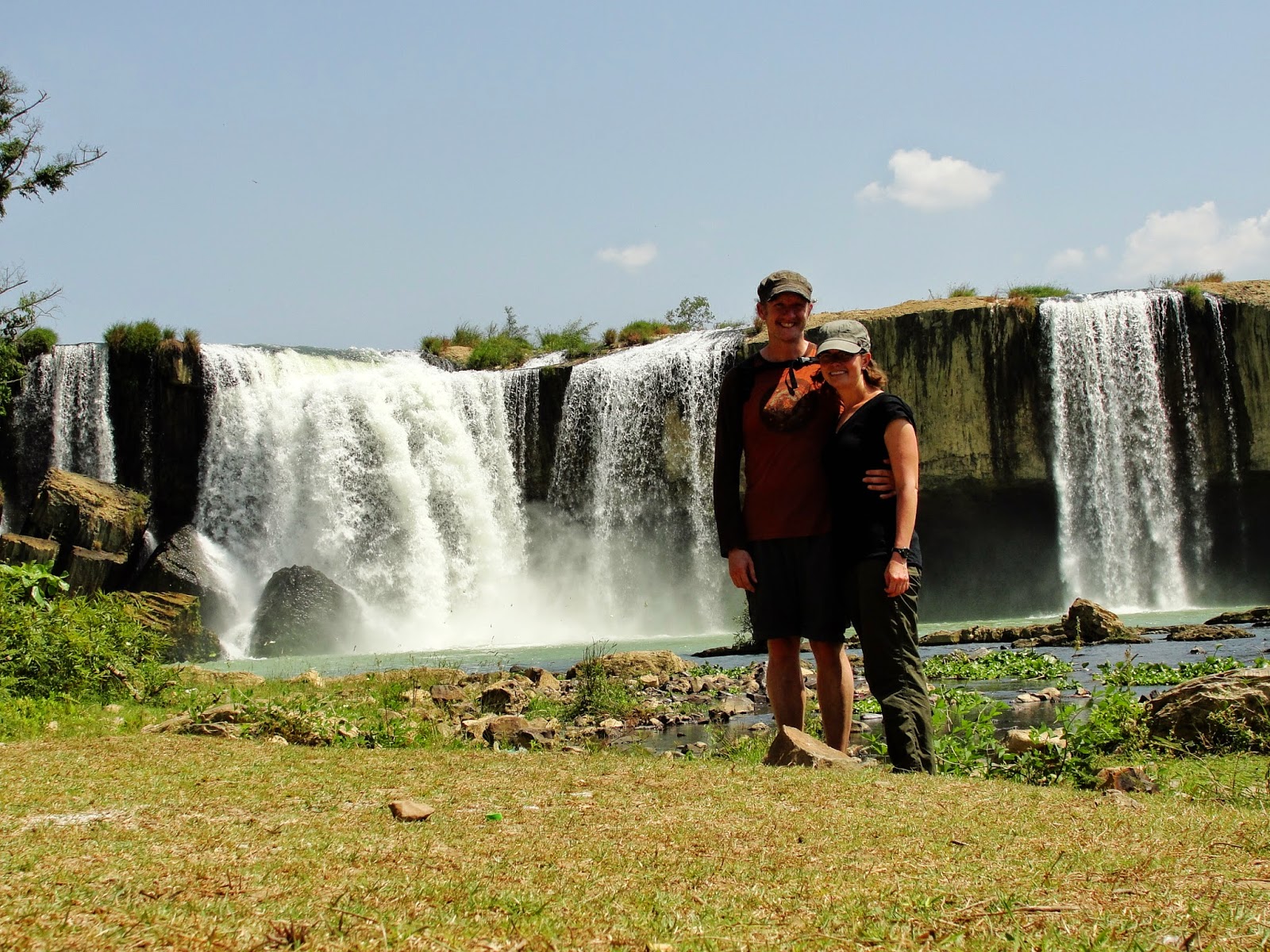 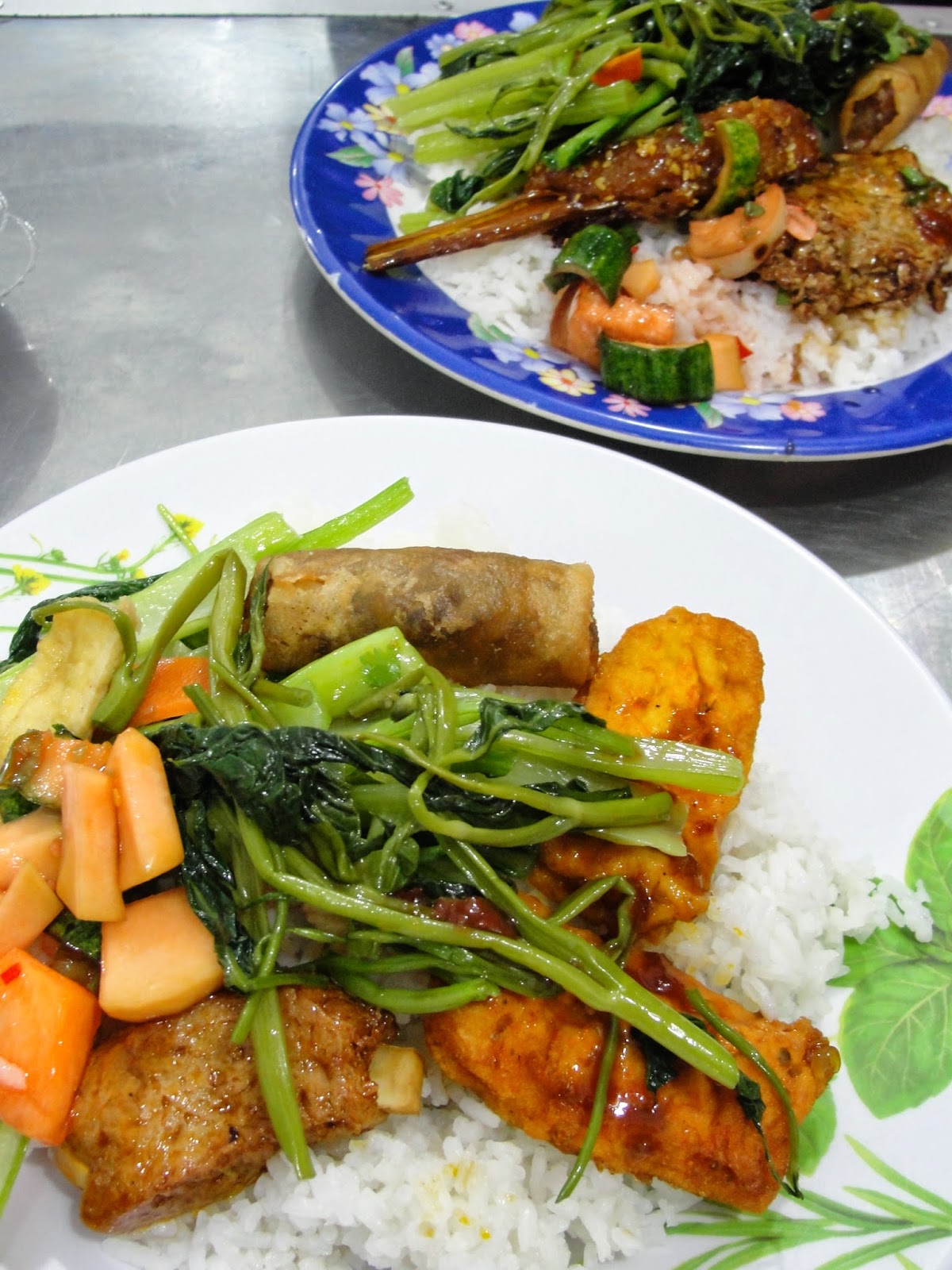 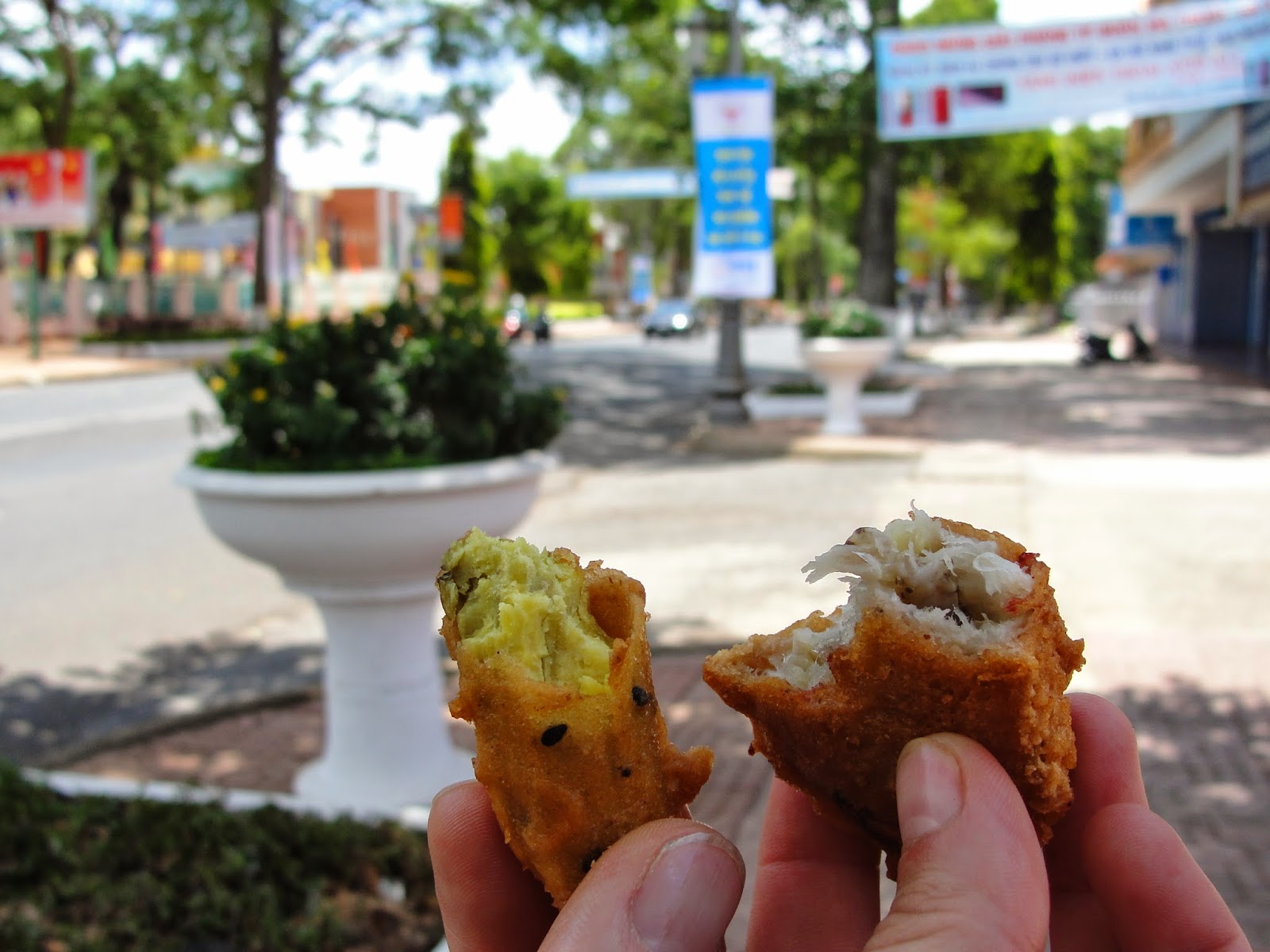 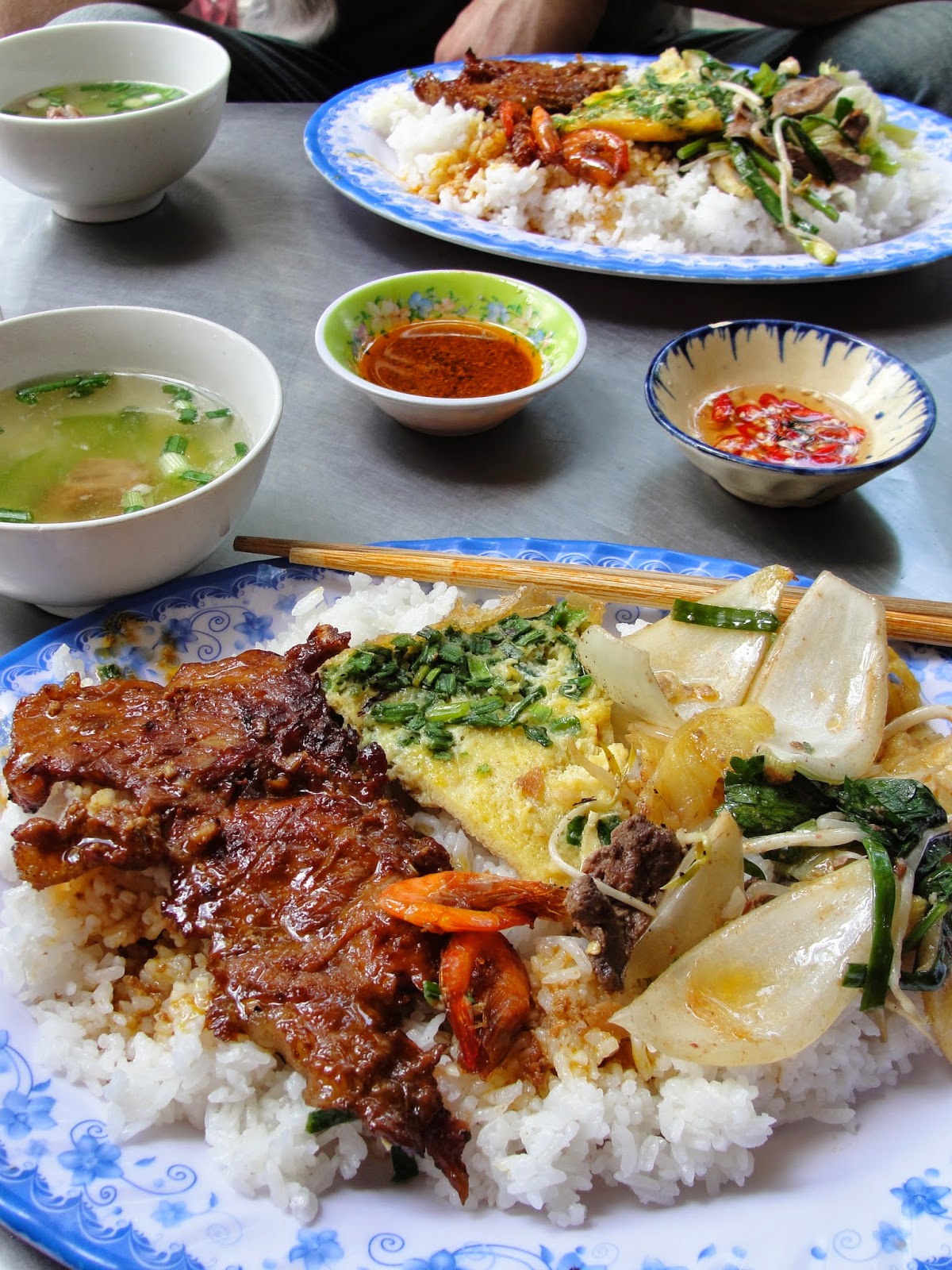 some was pork but
we think some of it might have been liver -
iron is good, right? 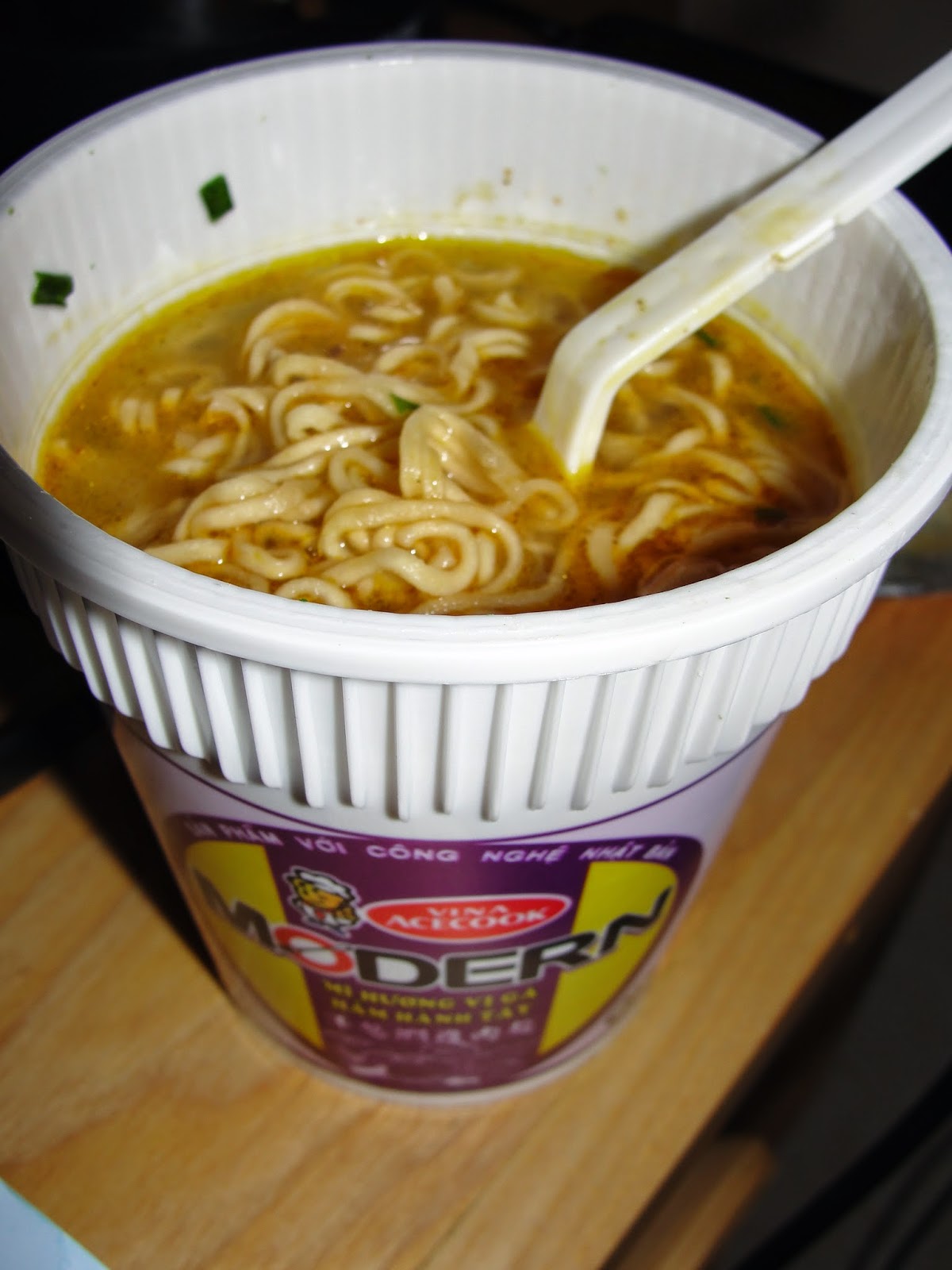 it had to be done 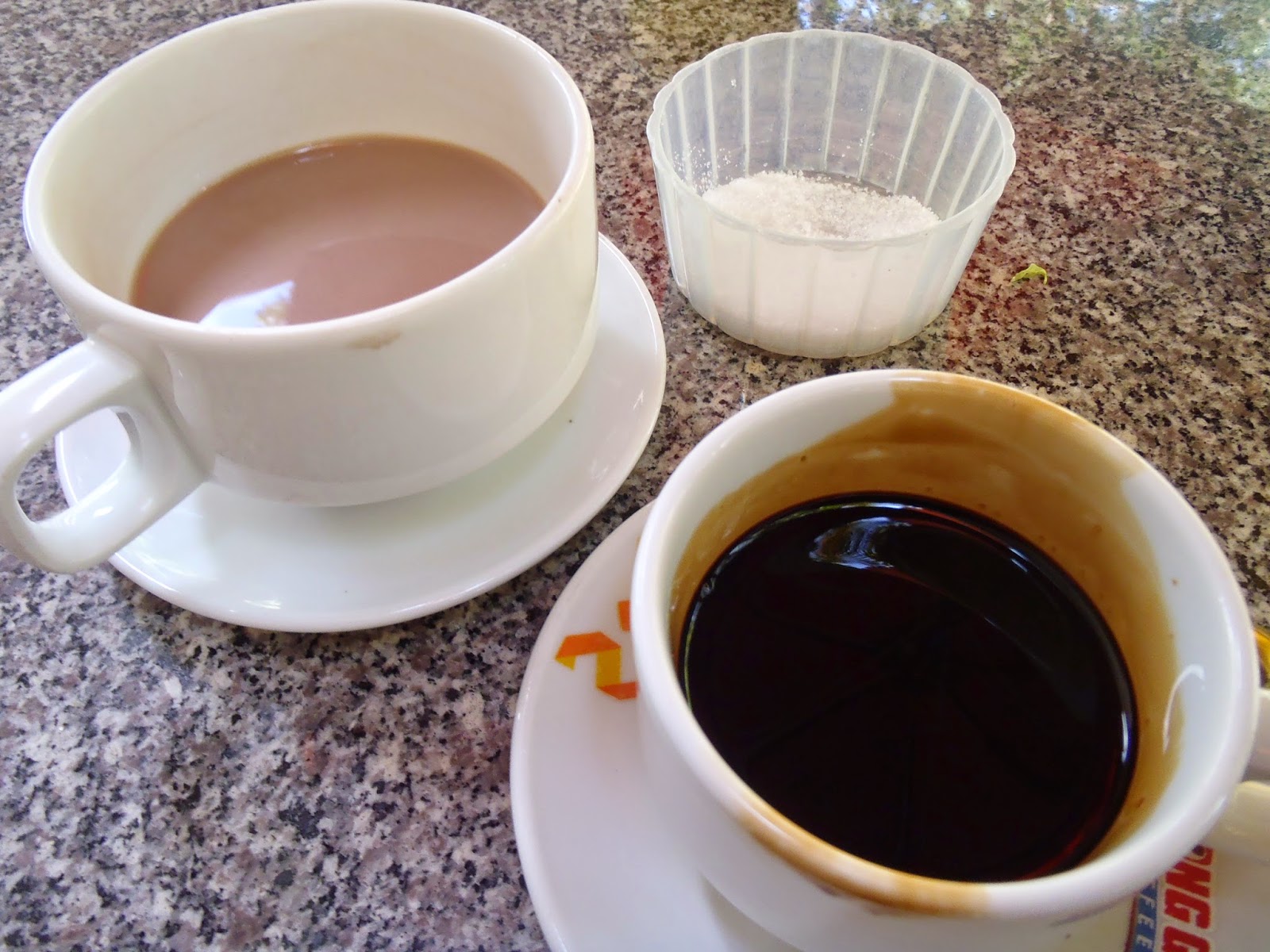 our reward for finally finding the museum

Lodging notes: OK... We only stayed here because it was the cheapest option on booking.com. But the Coffee Tour Resort was definitely the nicest place we have stayed in Vietnam. It was far enough outside of town center that we could see stars and hear crickets (and cicadas) at night; breakfast was simple, good, and included; there was a beautiful garden surrounding the hotel; and the friendly staff helped us get a bus to Nha Trang. 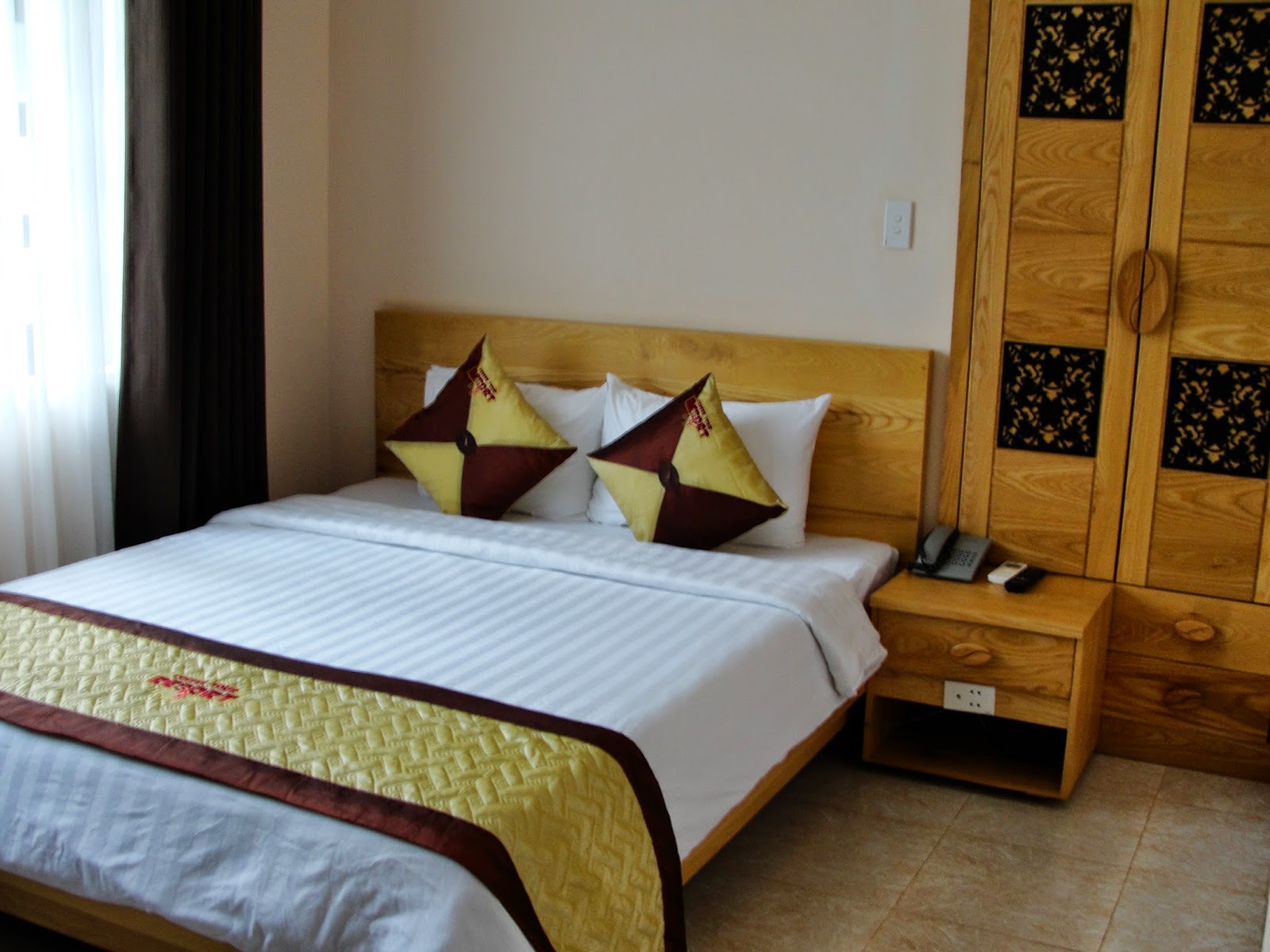 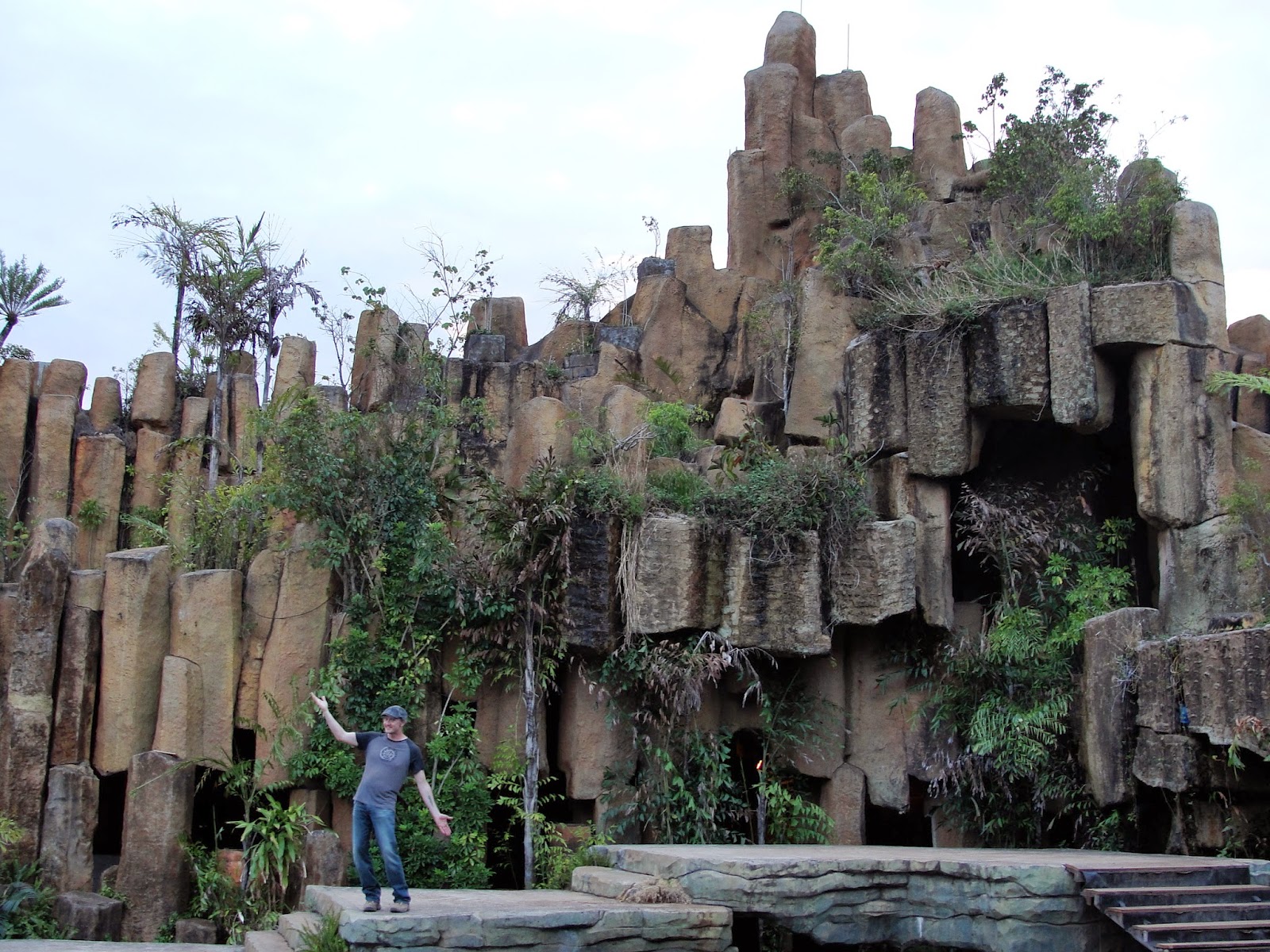 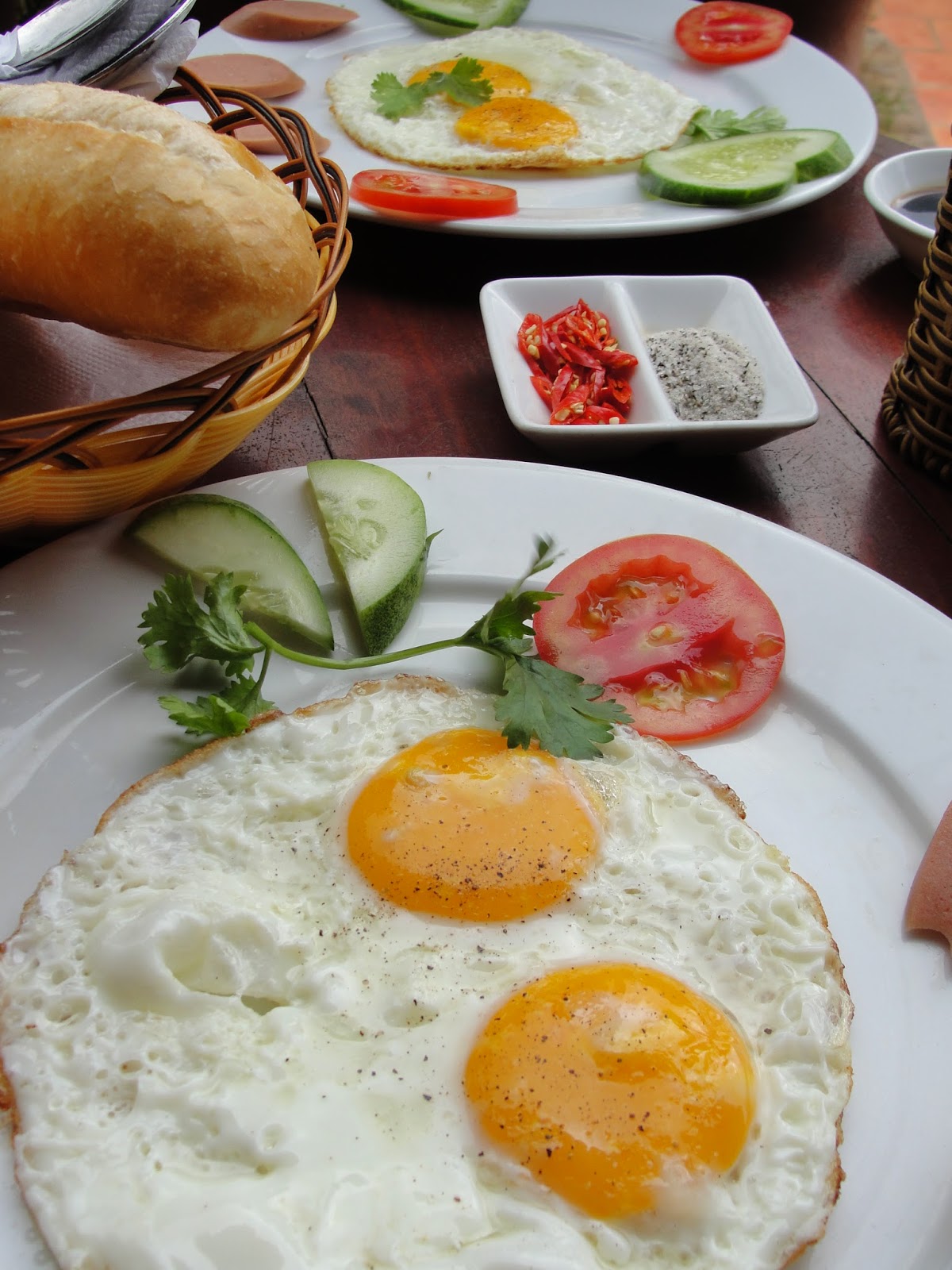 BMT was a great three-night getaway from the usual tourist path. But the weeks are getting away from us, and it takes forever to get anywhere, so it's time to hit the coast and start motoring. Nha Trang, here we come!
Posted by Slowly Global
Email ThisBlogThis!Share to TwitterShare to FacebookShare to Pinterest
Labels: asia, vietnam