Some friends visited Vietnam a few years ago and insisted that we try to go to Sơn Đoòng cave because they hadn't been able to make it. We like caves. "OK!", we said.

And then somewhere around Quy Nhon we finally looked into Sơn Đoòng cave. Turns out it's newly discovered, its tourism is limited to 84 people a year (with a wait list for next year already), and it's $3000. Riiiiiiight.

Luckily, there are many other cool caves in the area, and we managed to visit two during our quick stay near Phong Nha-Kẻ Bàng National Park. Both are allegedly the second biggest after Sơn Đoòng cave; if you Google either you'll see all kinds of conflicting bragging rights about "the biggest cave in the world" and "the longest cave in Asia" and so on and so forth... So we'll just say that both were AWESOME and leave it at that.

But before we get to the caves, a few thoughts on Phong Nha. Western tourism is a fairly new concept in Vietnam overall; this is especially true near Phong Nha. In our observations over the past year there seems to be a tourism cycle that goes from locals being curious about foreigners and appreciating the economic boom, to being annoyed about the foreign invasion, to being opportunistic with foreigners' money. (And then the locals all flee - or get pushed out for economic reasons - and the tourism business runs the town.)

From what we saw during our short stay, this town is somewhere between the first and second stage - most people were friendly and welcoming but others didn't return our waves or hellos. And some have advanced to the third stage. We got ripped off buying petrol for the motorbike and one in ten of the kids who said a friendly "hello!" would then hold their hand out for money.

There are a handful of Aussies who've opened all-inclusive hotels near Phong Nha. We stayed at one because we thought a lakeside resort at off-season prices sounded peaceful and relaxing, and because there's not much listed on Booking.com and we're still not comfortable rolling into town without a place to stay. 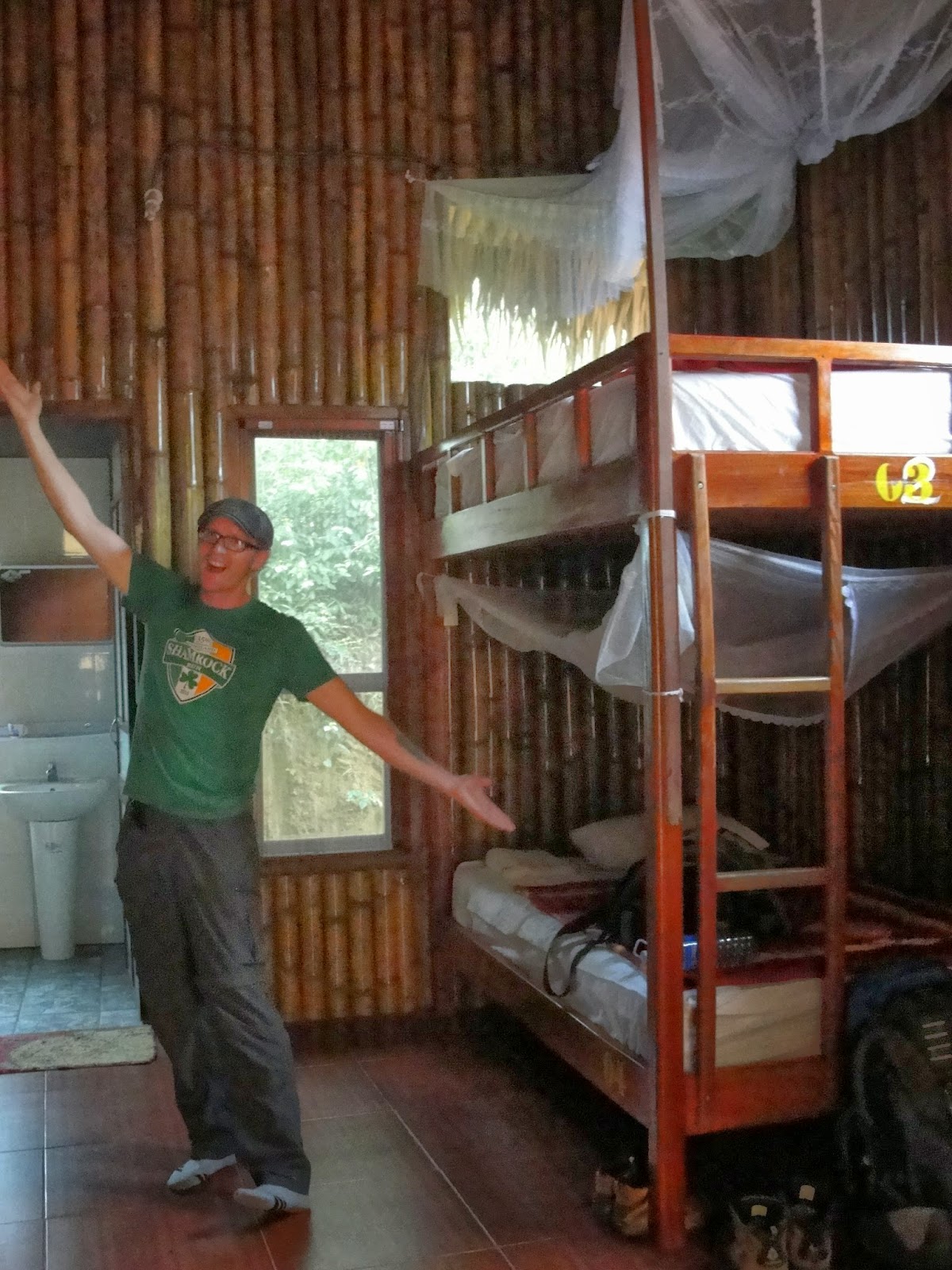 peaceful and relaxing - not really
but airy dorms and mossie nets, at least
Unfortunately, we did not enjoy the resort at all. There were many reasons but the main one was our fellow guests. It seemed that western foreigners went there to drink, do organized tours, eat their $5 hamburgers, and generally stay in their western bubble.

We couldn't wait to leave the resort! We preferred walking the village roads, checking out the local gardens and houses, chatting briefly with the kids who all screamed "HELLO!" to us as we passed, and stopping at local markets or a cafe for more authentic (and inexpensive) food. 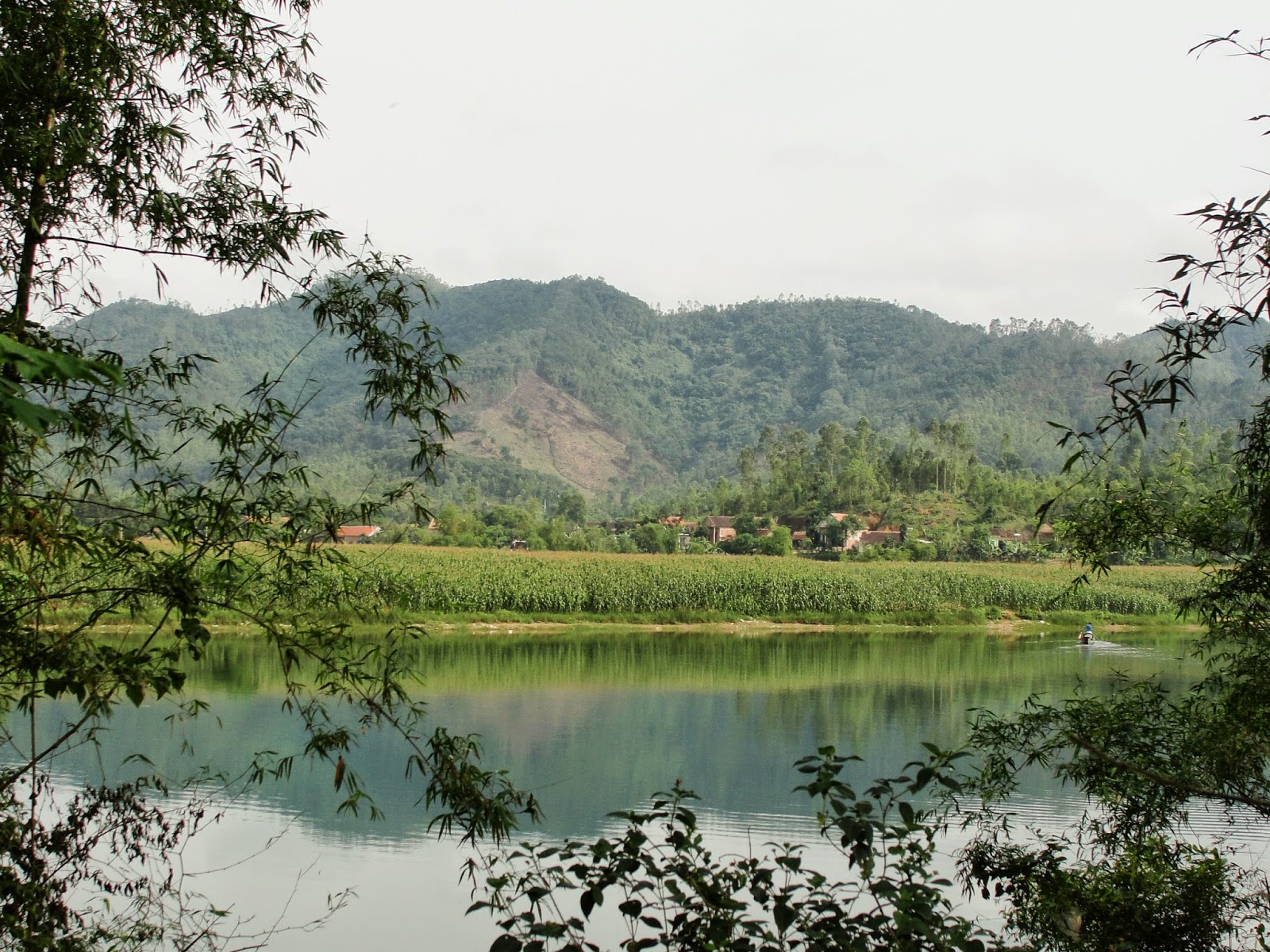 along the village road
We've been advised in various forums not to judge fellow travelers for how they choose to travel (it's all about the individual journey, blah blah blah) and generally we're pretty cool with that. But we think this sort of approach to traveling just makes it harder for those of us who do want to interact with locals, who aren't just visiting for cheap beer and all-inclusive tours, who want a more trusting and fulfilling experience out of travel...

Anyway. You don't care about all that. Back to the caves!

To visit Paradise Cave you can take a tour for a minimum of $45pp and have 30 minutes in the cave, or you can DIY and take as much time as you like. For about $15pp, we rented a motorbike and headed about 30km to the park, paid the entry fee and walked along a flat jungle forest path to an uphill jungle forest path and then into the cave. We stayed for about two hours. 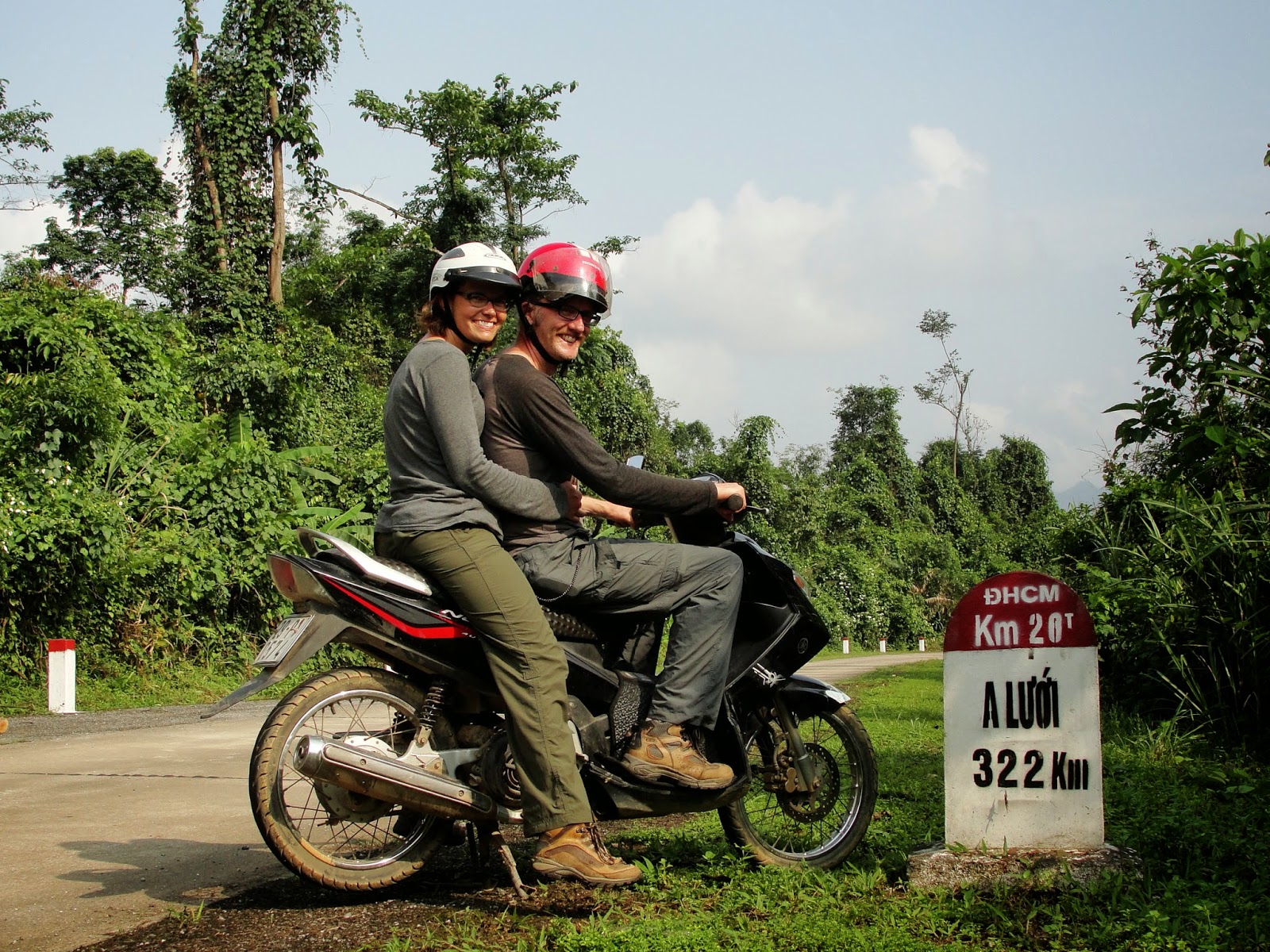 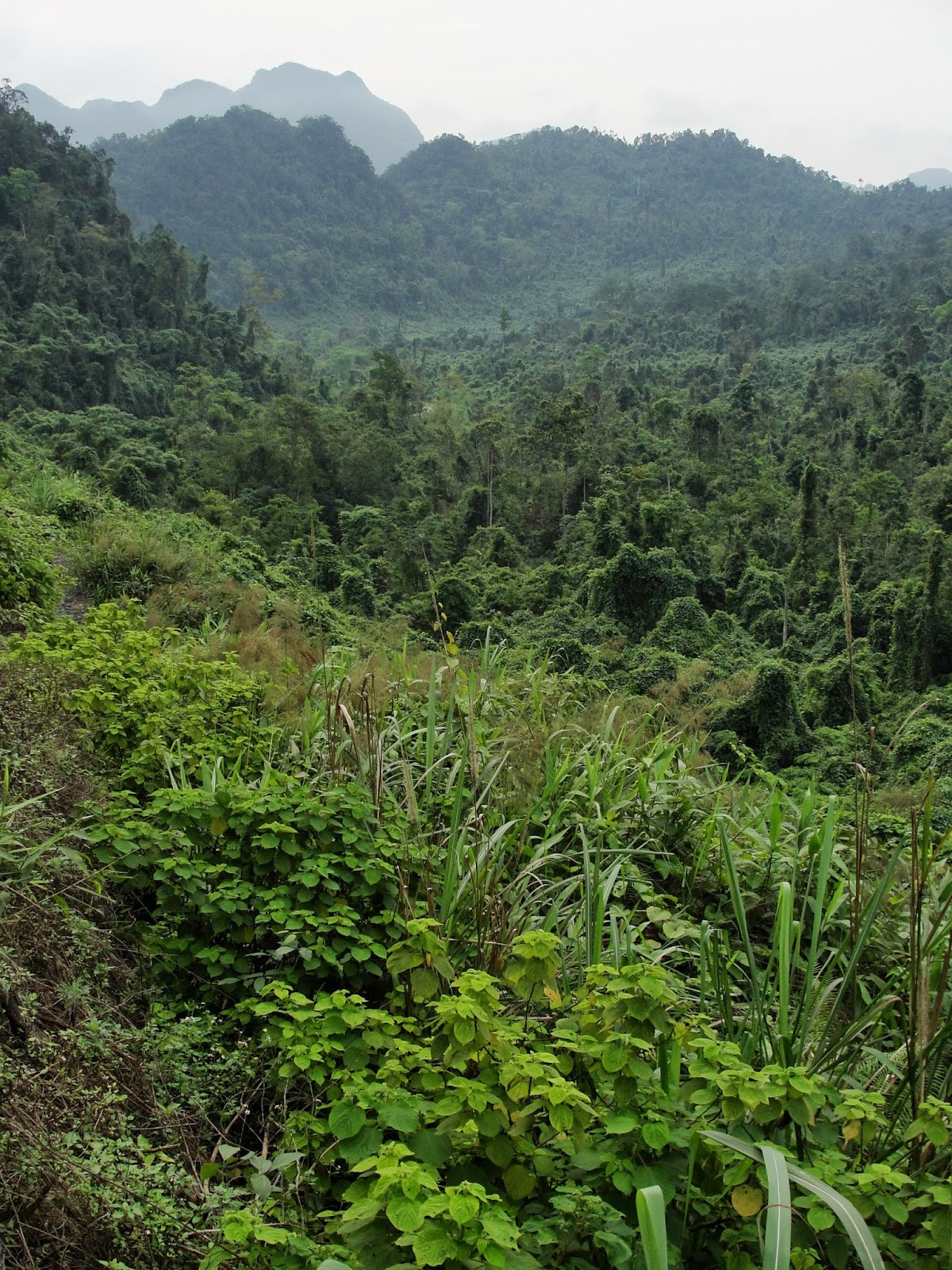 views along HCM road
To visit Phong Nha cave you can take the same tour that goes to Paradise Cave (about $45pp) or you can DIY. This time we skipped the motorbike and walked about 10km to the park entrance and 10km back. We were able to go in with some other tourists on the $17 mandatory boat ride (which, split among 9 people, worked out pretty well) and enjoy the cave for pretty cheap - $6pp cheap, in fact. 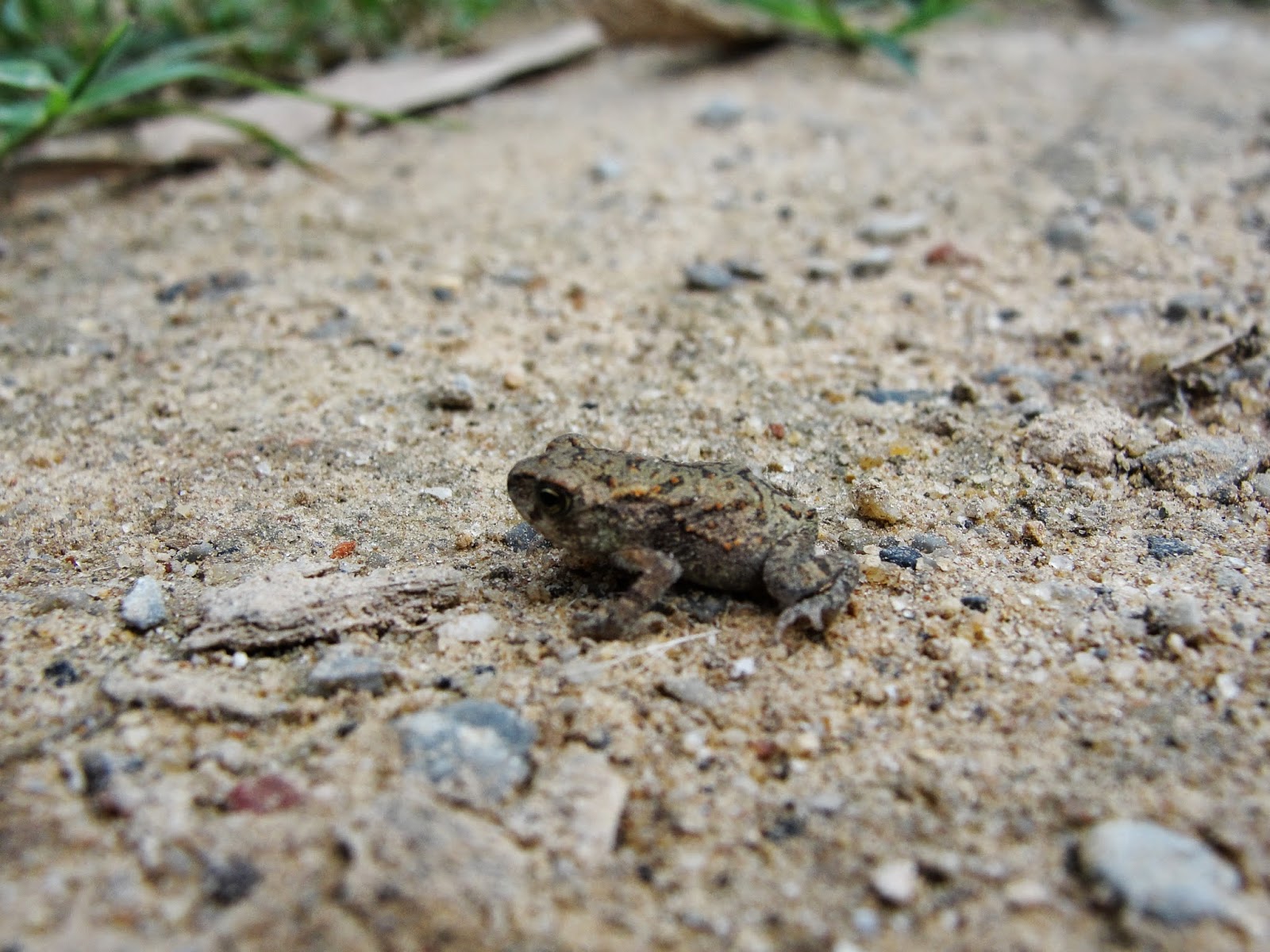 why would you want to motorbike?
you'd miss all these tiny little frogs! 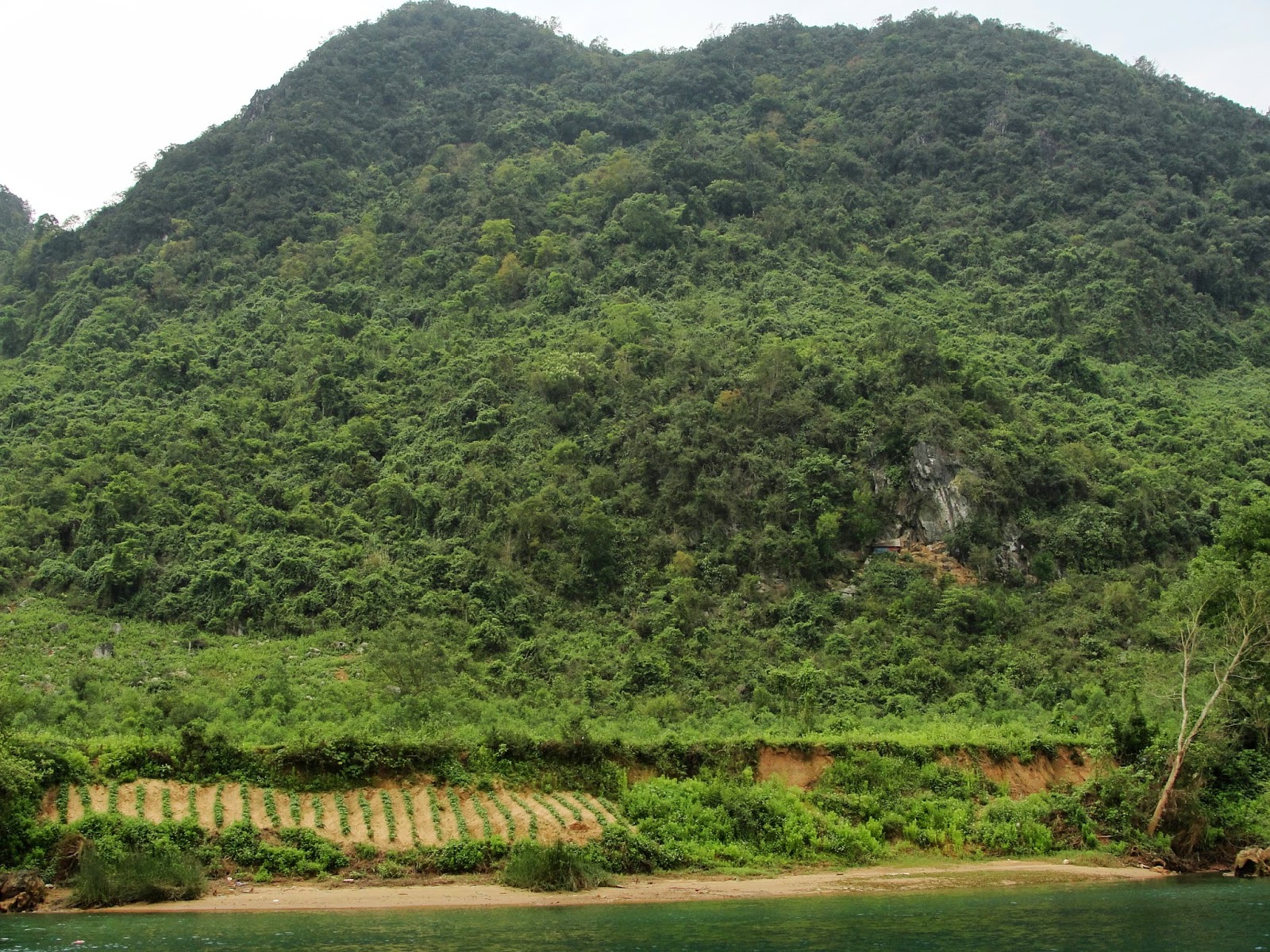 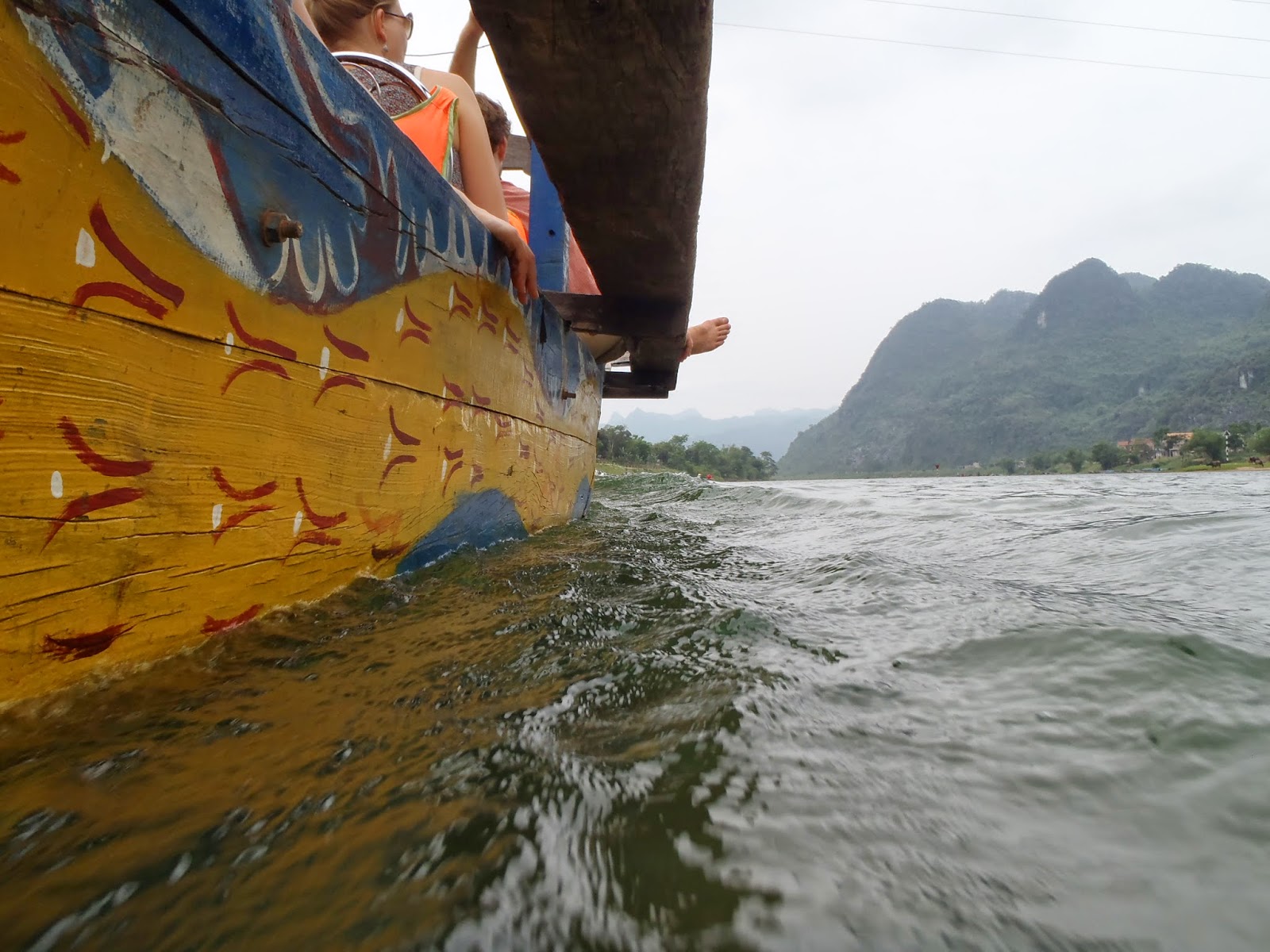 boating to the cave mouth
(they cut the engine when you enter
and just use paddles)
Cave photos won't do them justice but here are a few anyway. First, Paradise Cave... 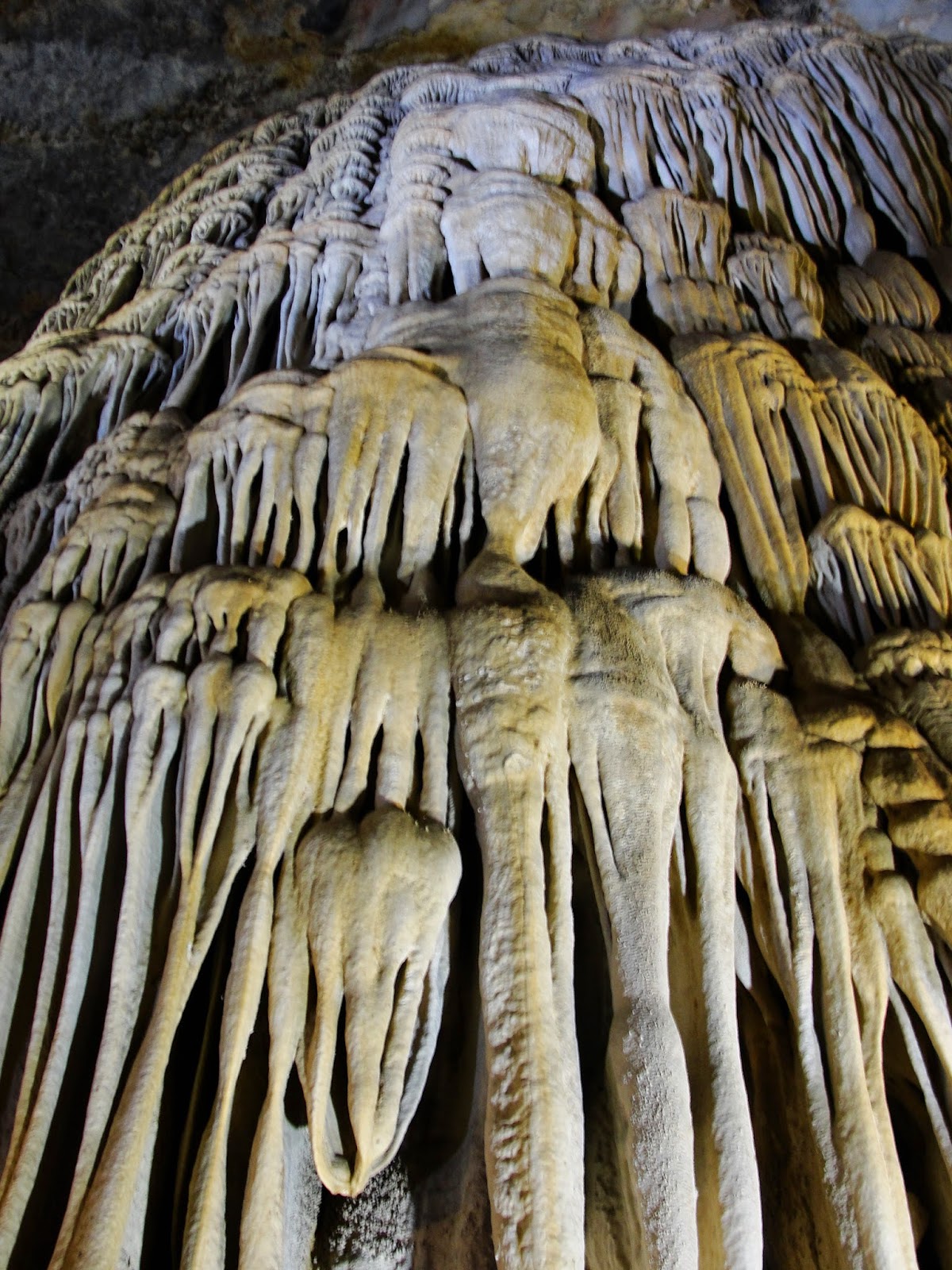 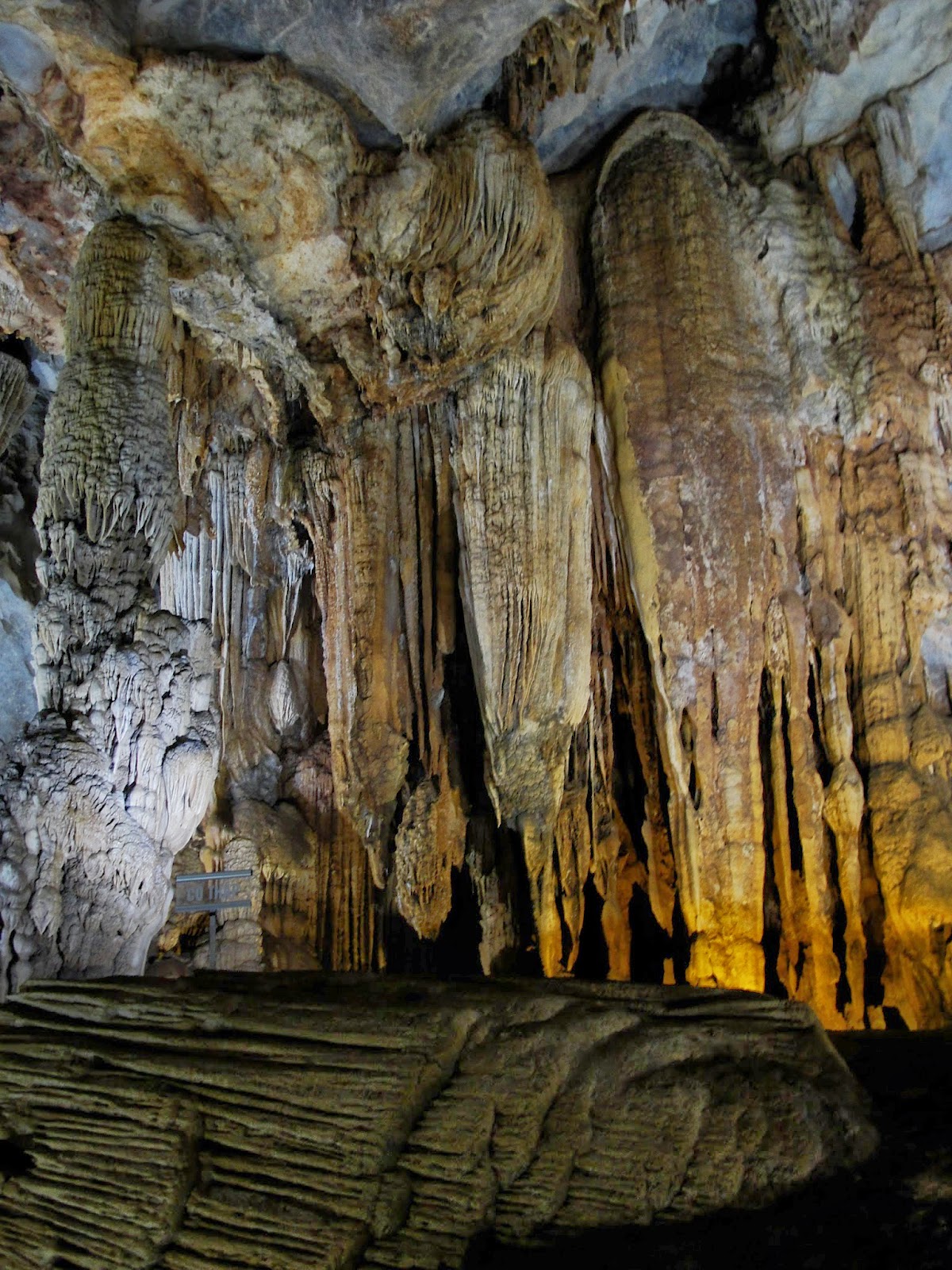 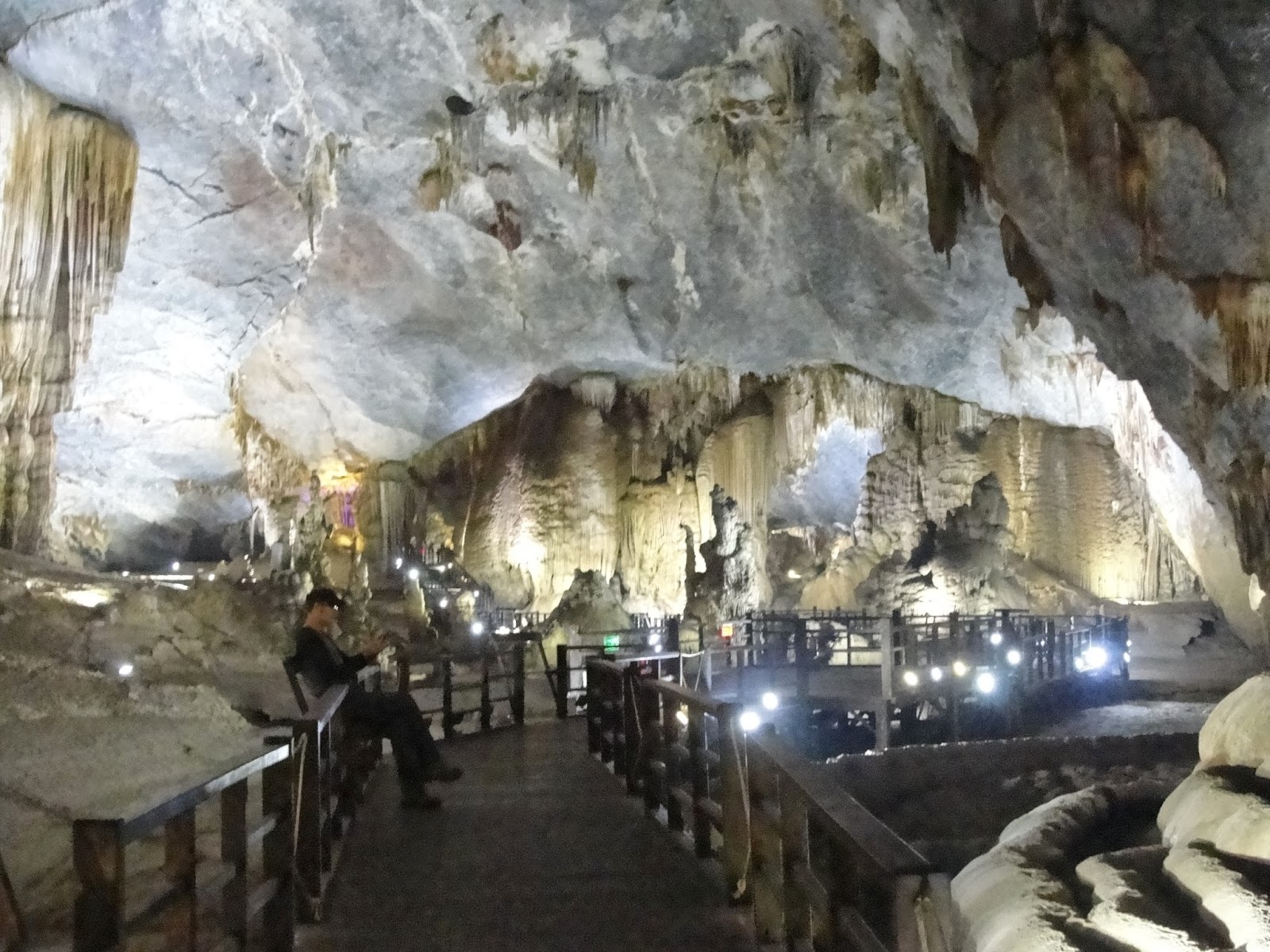 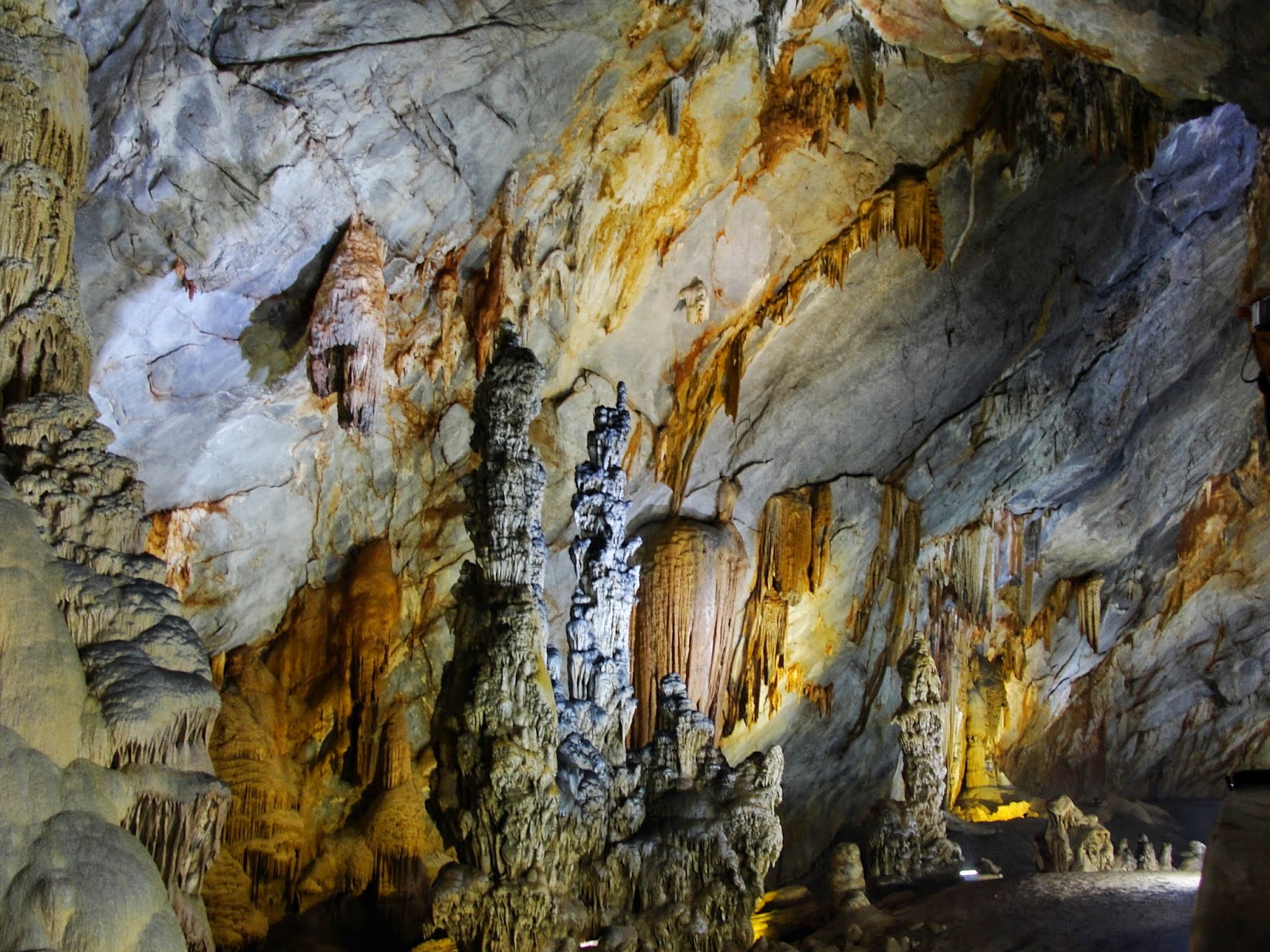 enormous caverns
And then Phong Nha... 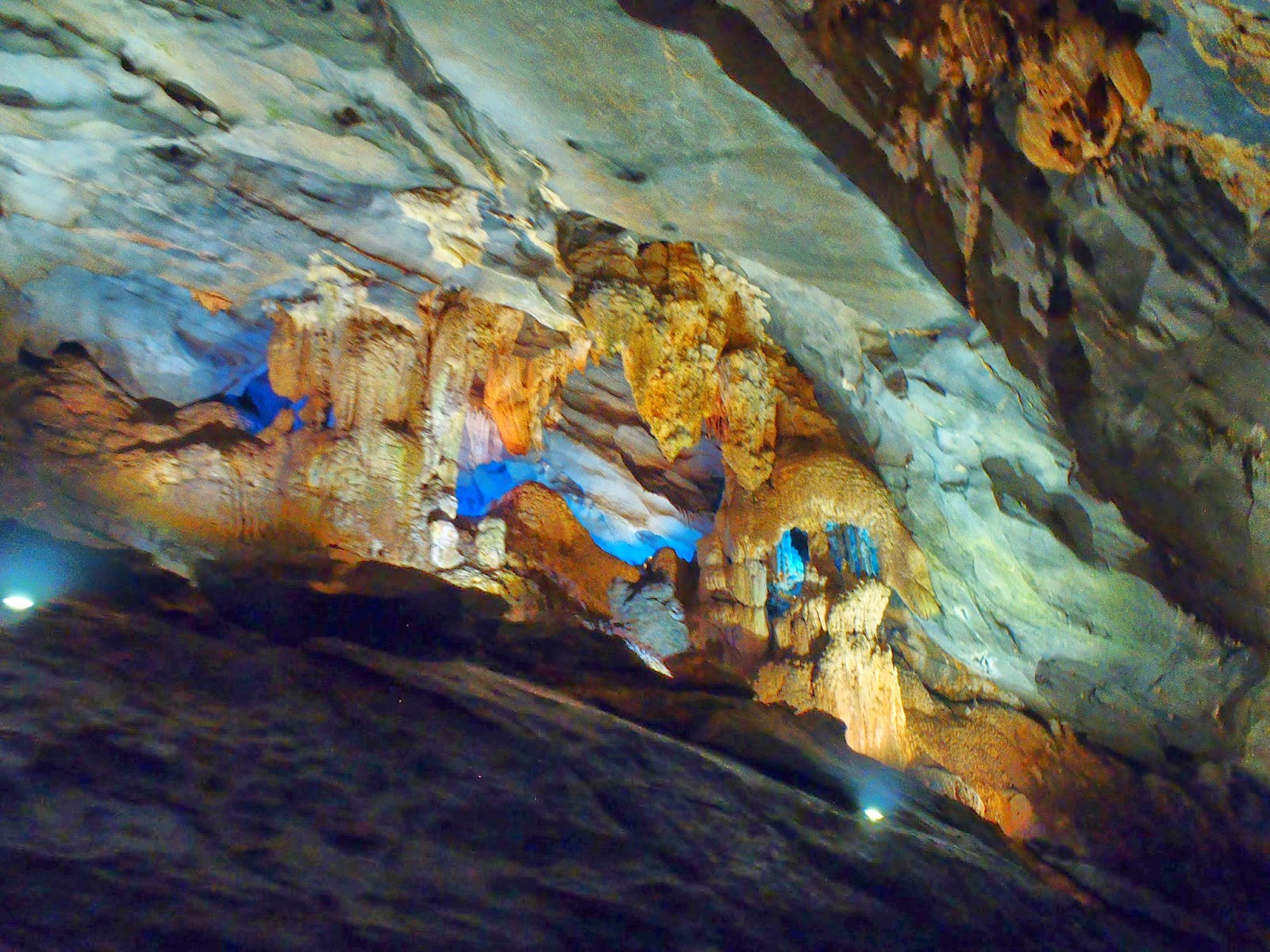 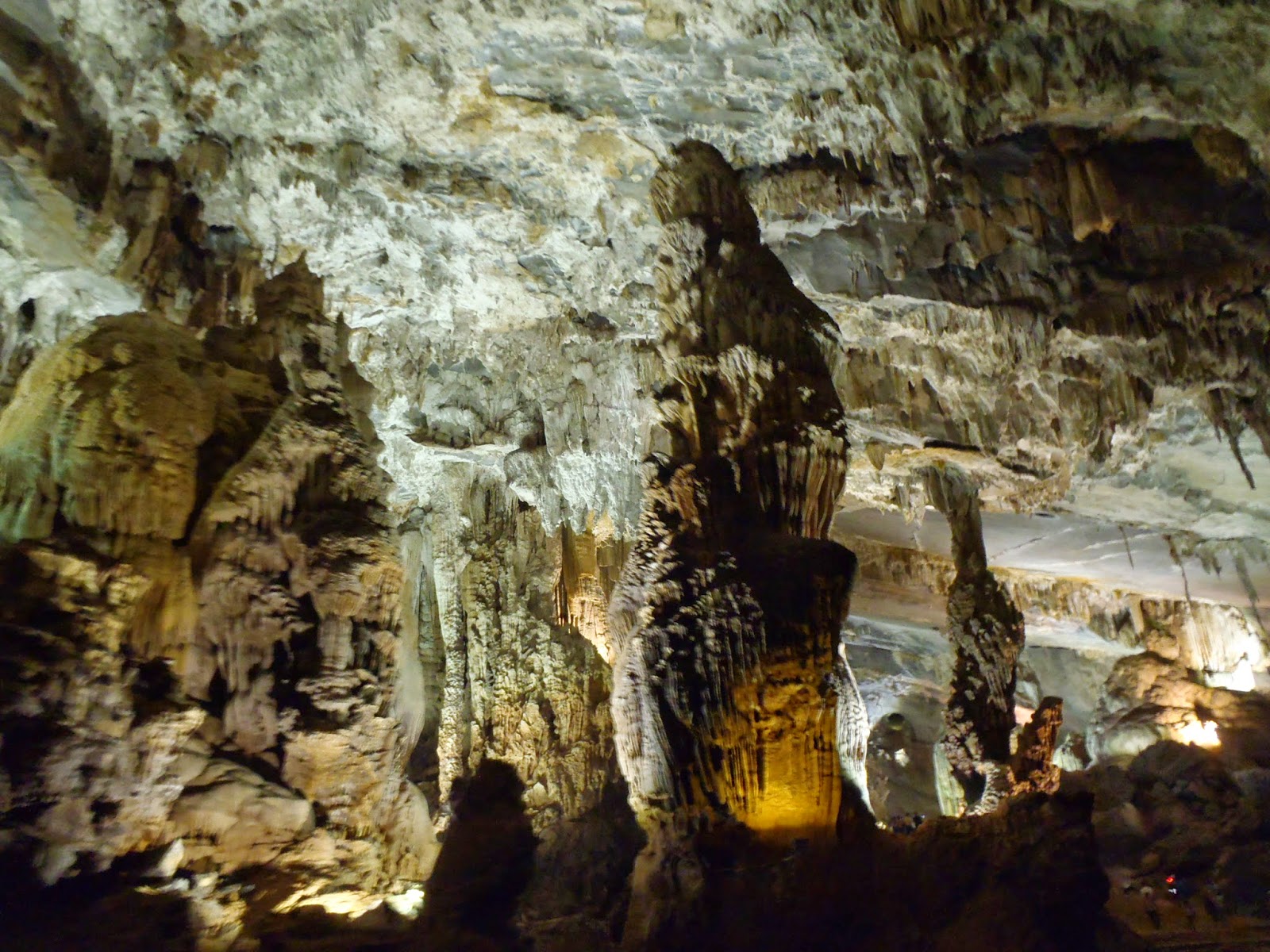 from the ground up 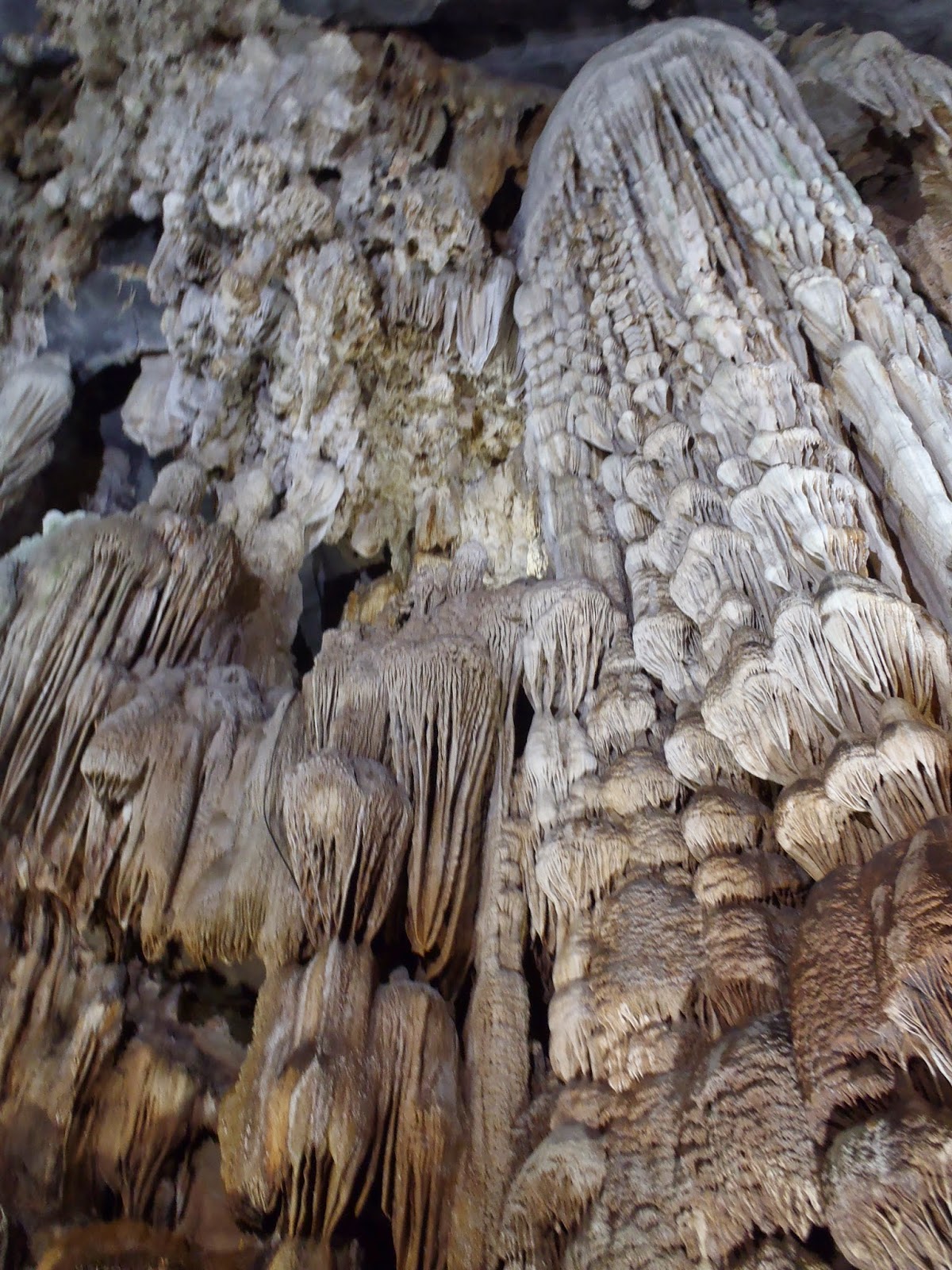 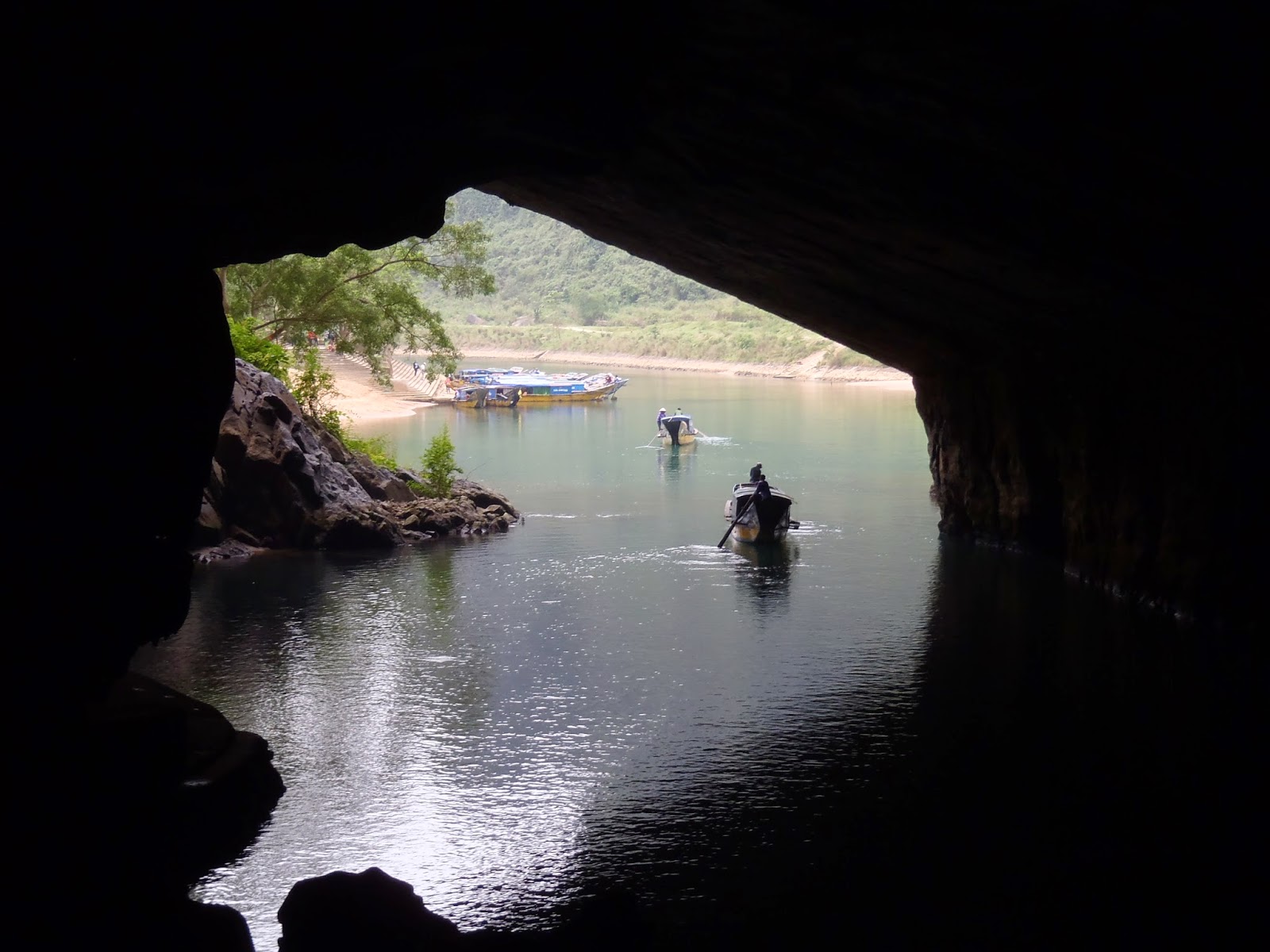 the end
Pretty sure Phong Nha is one of those places we'll say we were so glad we went in 2014, because in 2020 it's going to be a nightmare for people like us.

But yes, we are so glad we went.

Food notes: other than some really good spicy pork vermicelli at a cafe near the park, we ate at the hotel (noodles, veggies and tofu - not the $5 hamburgers) as a matter of convenience . It was pricey but alright. 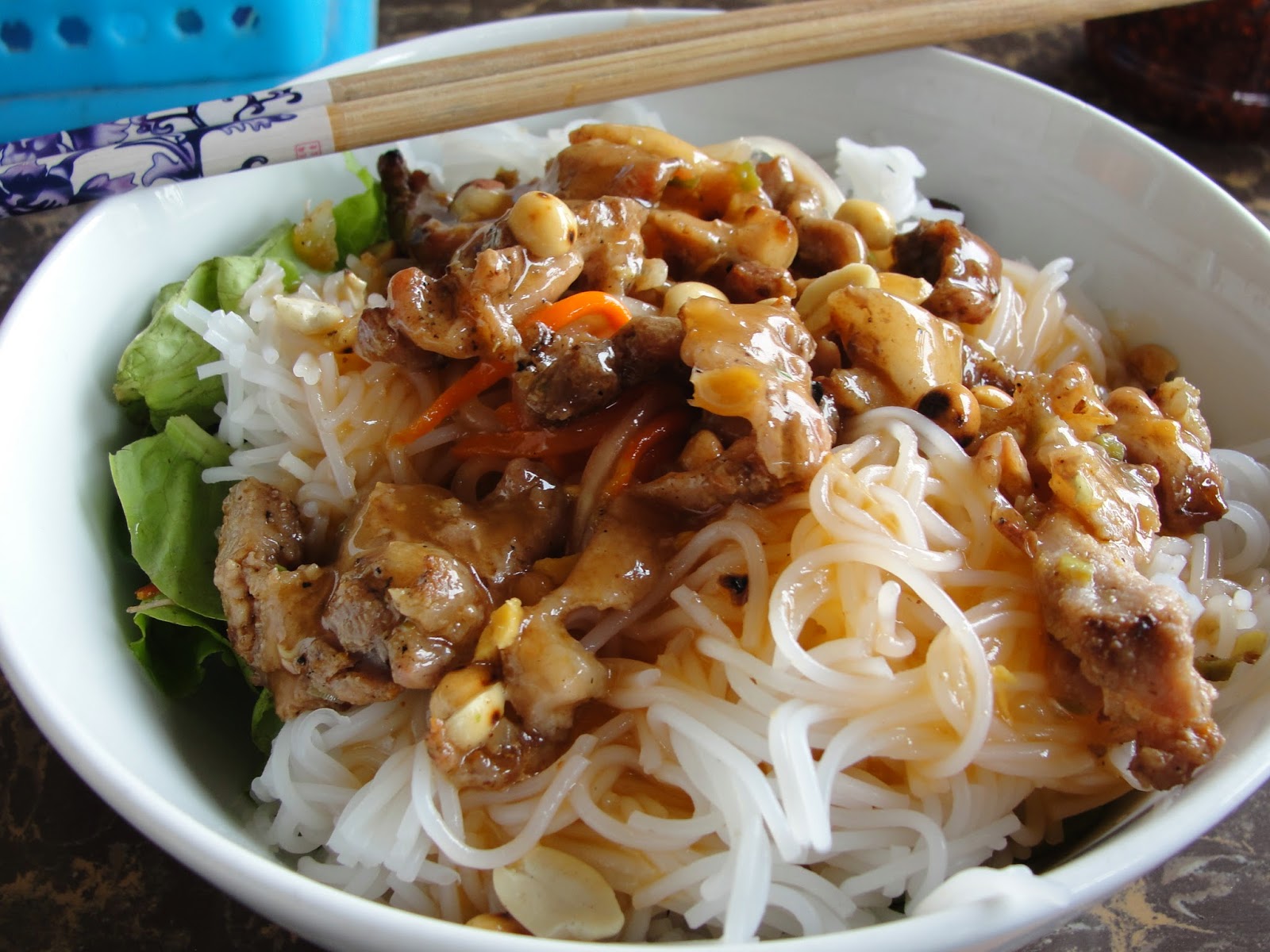 spicy pork vermicelli is definitely the way to go
Lodging notes: Phong Nha Lake House Resort was perfect if you're a westerner who wants to surround themselves with all things western when visiting a small village in a foreign country. (It wasn't for us.)

To the north, Hanoi, and Sapa at last!
Posted by Jen
Email ThisBlogThis!Share to TwitterShare to FacebookShare to Pinterest
Labels: asia, vietnam