There is a lot of information on ye olde internet about Hierapolis and Ephesus. A LOT. And not just on Wikipedia, which we only link to because we are lazy and/or strapped for time. So we'll let you go off and read about it yourself, wherever you choose to do so.

But if you're visiting Turkey and you're trying to decide which to visit, we thought we'd offer a side by side comparison of some of the highlights. A sort of "1... or 2" you might get from your eye doctor, only these will be pretty pictures instead of blurry letters.

First up, the sarcophagi. 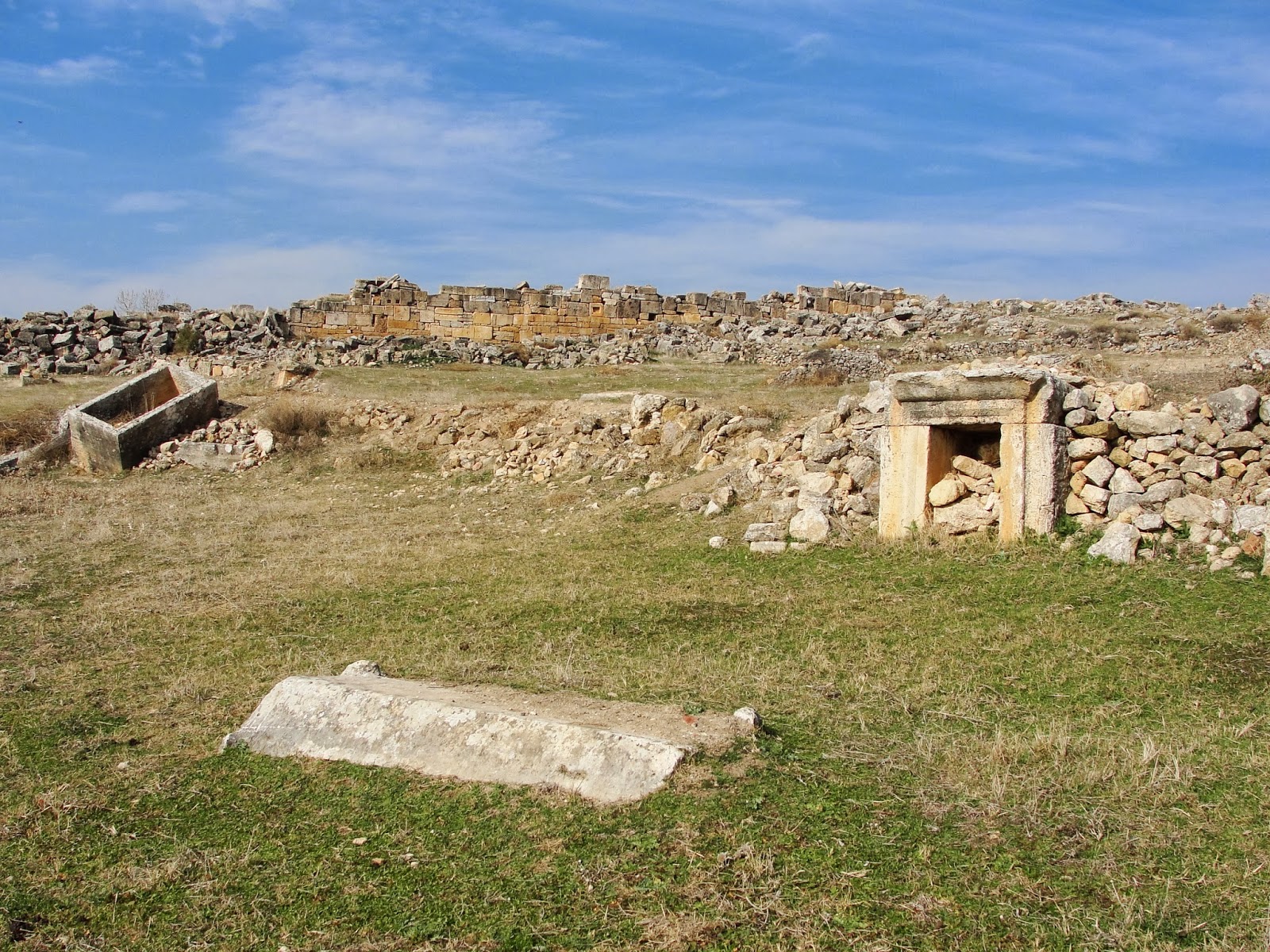 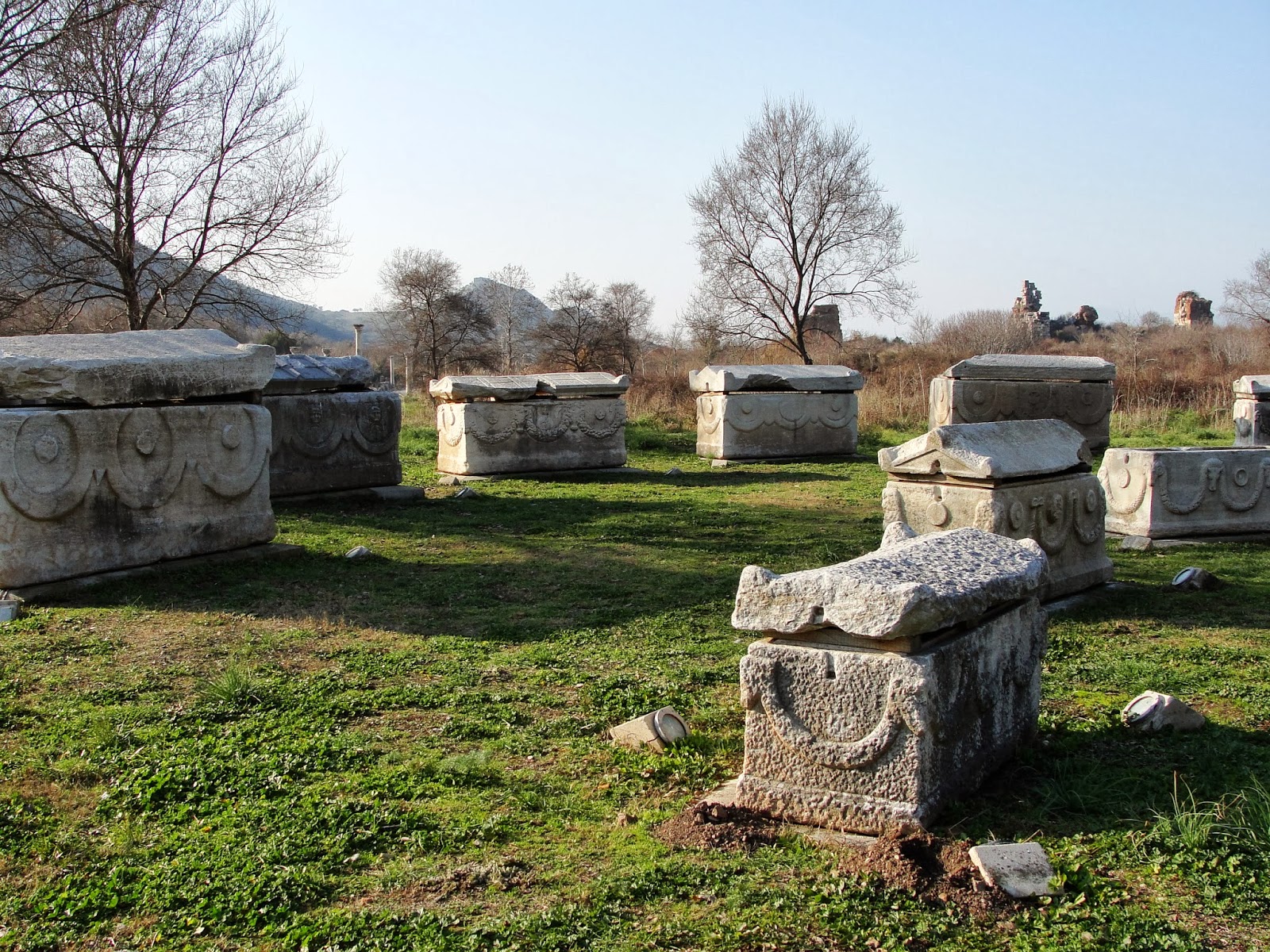 If you prefer #1, you'd love Hierapolis. This was our first stop after the entrance fee, and as we wandered among the tombs in the cemetery we wondered whether the rest of the ruins would be this sparse. The empty graves are splayed about and overgrown; some are sealed tight and others are upended and wide open. A few paths lead here or there but otherwise you're free to just roam. The area had a certain sereneness and a gorgeous view of the mountains.

If you prefer to see tombs as they are lined up in #2, then Ephesus is for you. It was neat to see them side by side but it felt more like a museum exhibit than an archaeological site. 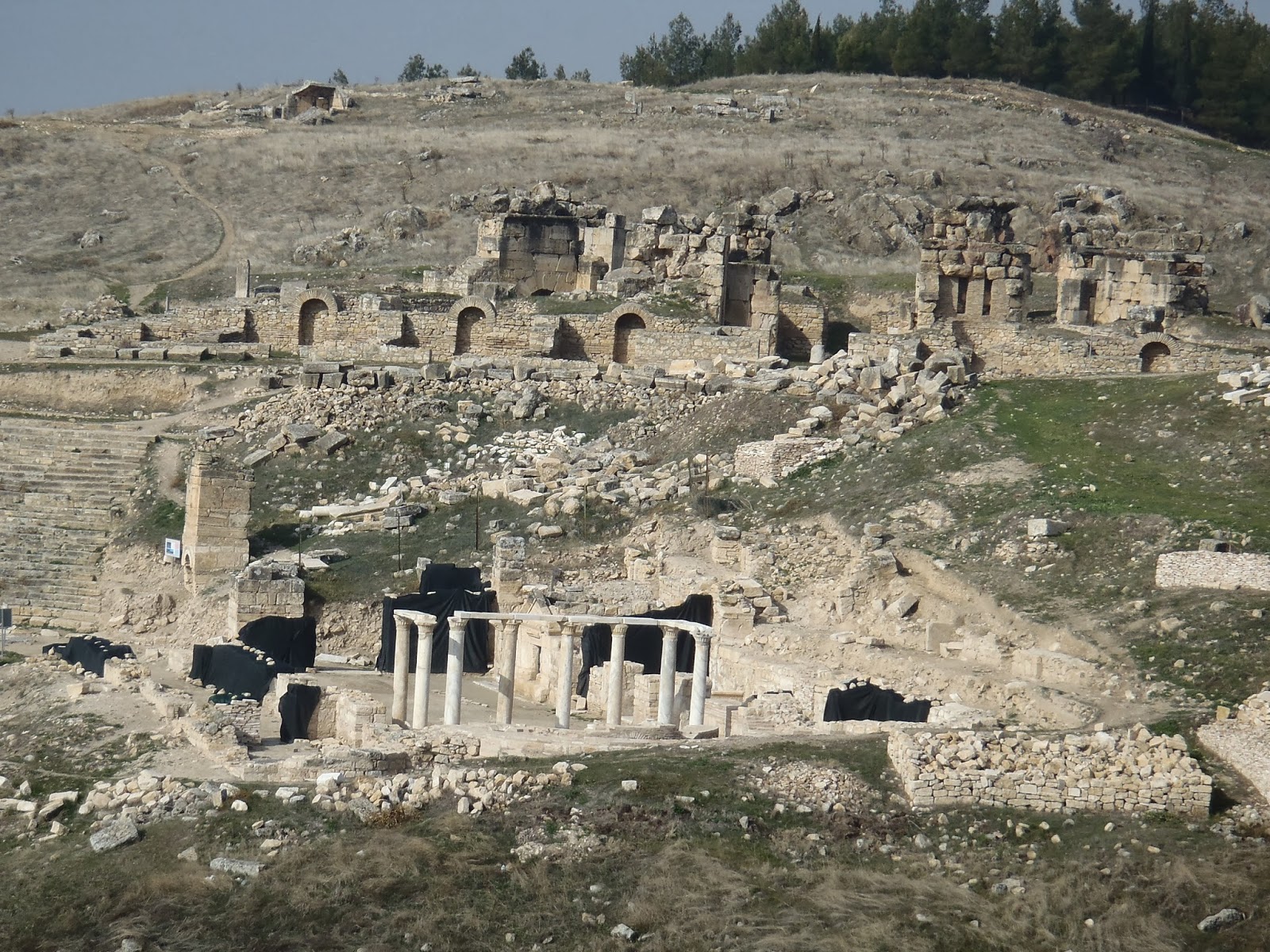 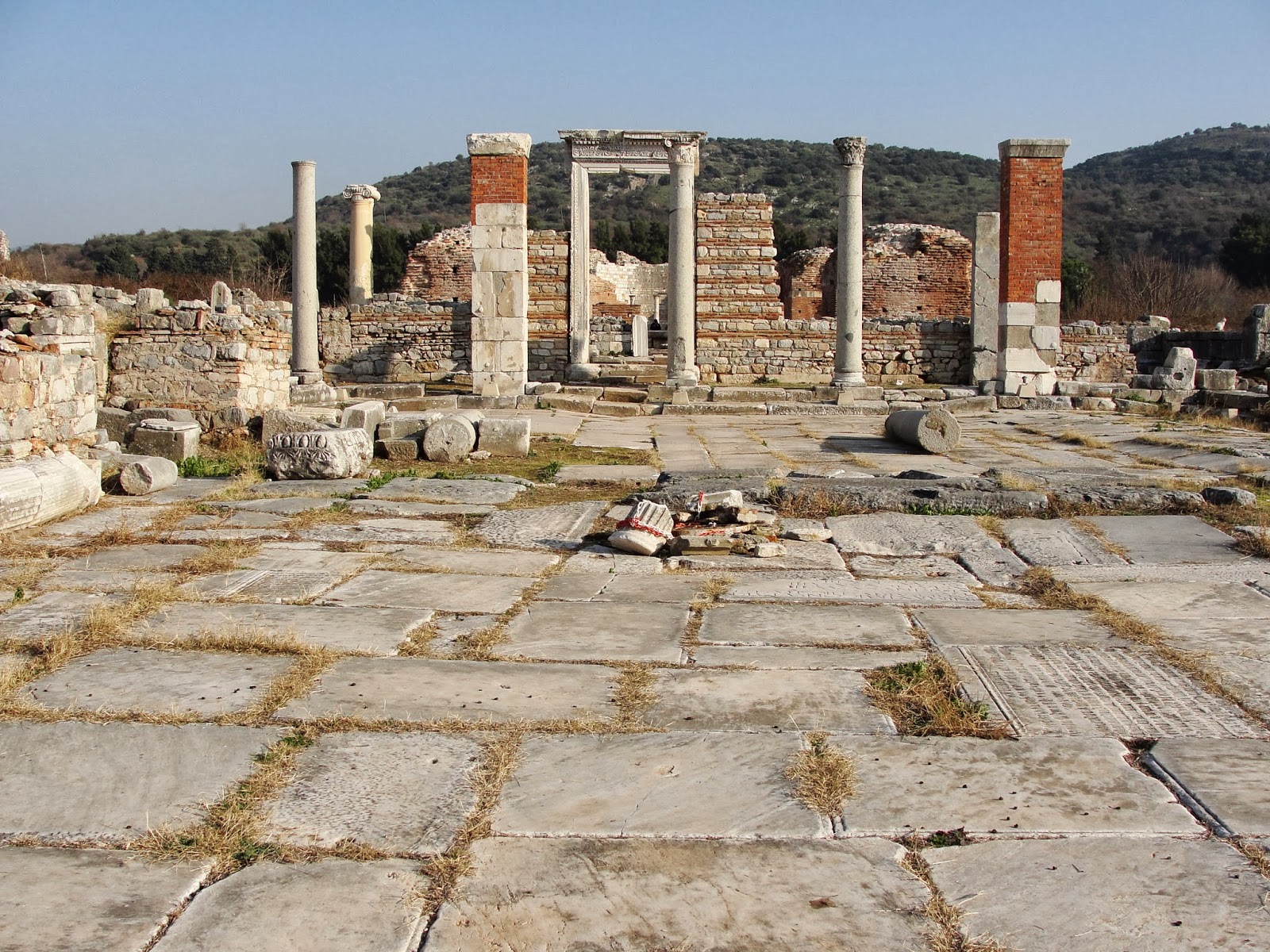 There wasn't much left of Hierapolis's actual church, and you can see in #1 that what is there is mostly under restoration. The adjacent building (St Phillipe Matyrion) was really interesting though - an octagonal healing center of sorts where pilgrims flocked for prayer, healing and fortune telling. And, in our case, baklava eating.

Ephesus's church in #2 seemed as long as a football field. We did like that the baptism area had been preserved (or perhaps restored) and we did like the sheer size of it, but otherwise, to us non-religious folks it felt confusing and unwelcoming.

The Roman roads. Do you prefer to walk down a Roman road that might result in a sprained ankle? 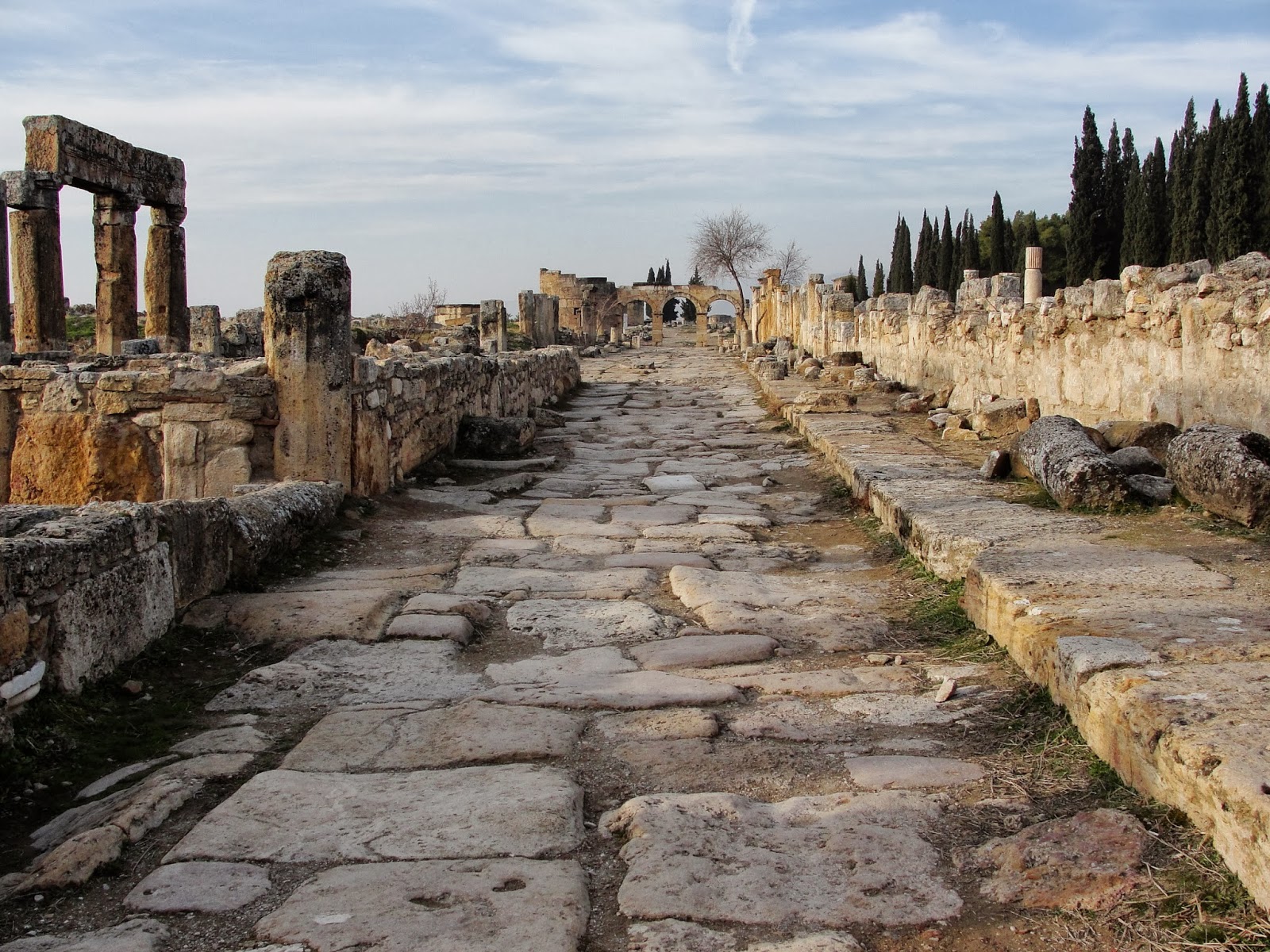 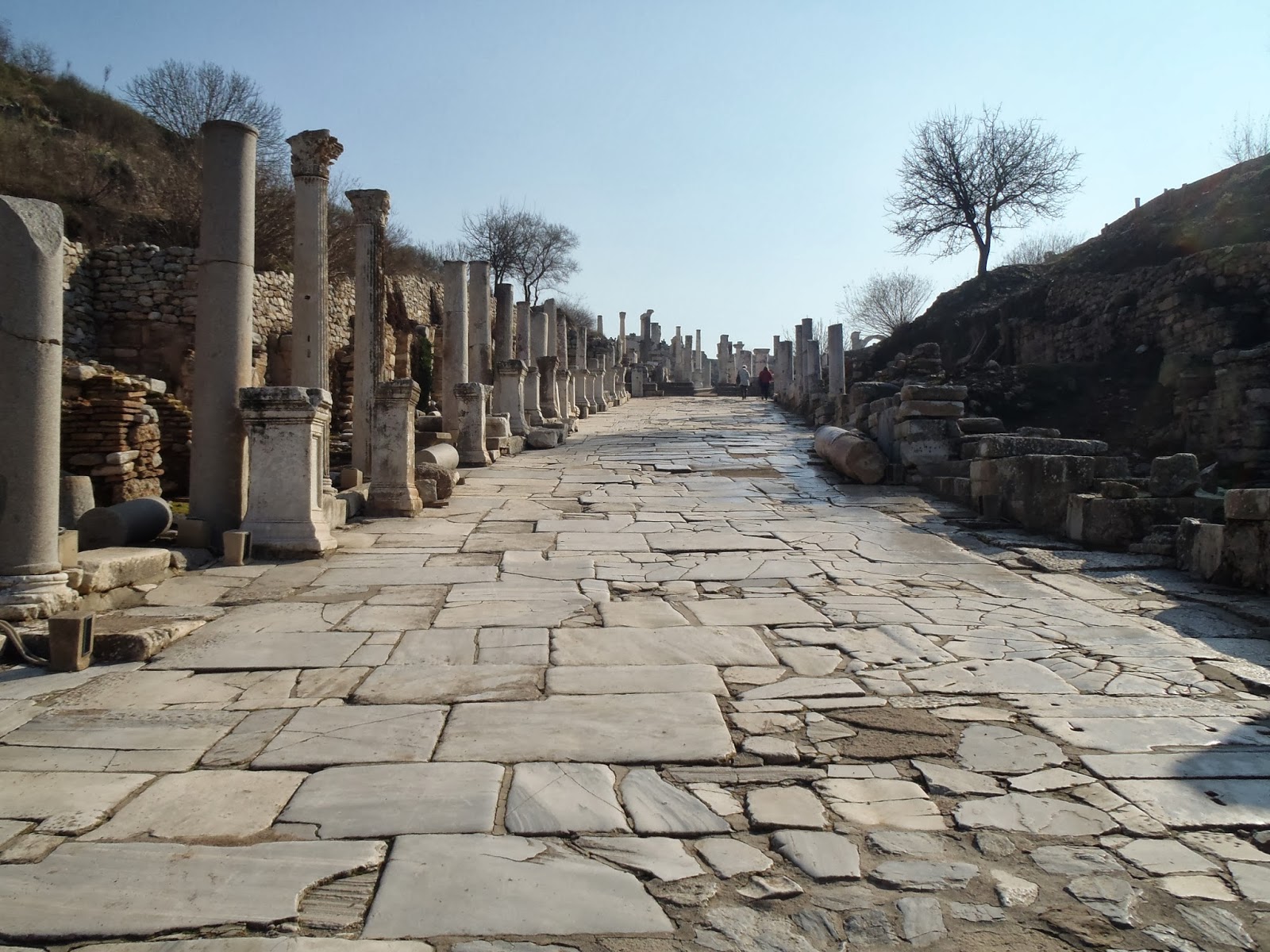 And then there were the theaters. Theatres. Whatever.

Hierapolis's theater is allegedly one of the best preserved in Asia. It was pretty awe-inspiring, so much so that it evoked a collective "OOOOOOOOOOOOOOOOO!" from a busload of elderly Japanese tourists as soon as they walked in. The echo was amazing! It made for a nice lunch spot... but there were no kitties.

Ephesus's theater was massive, falling apart in places, pristinely restored in others, also a nice lunch spot, and there WERE kitties. Lots and lots of kitties. Kitties that liked corn nuts but not raisins. Go figure. 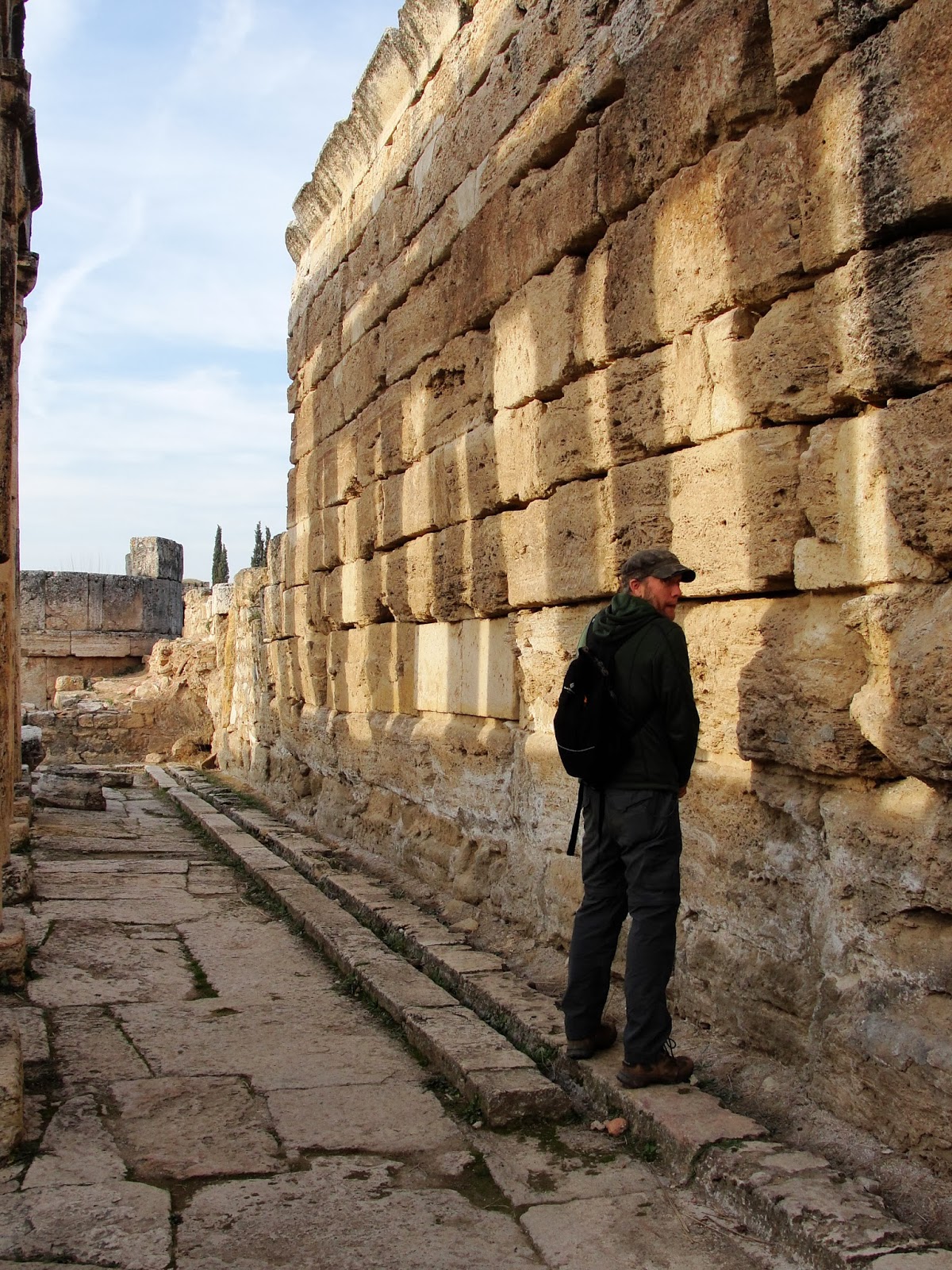 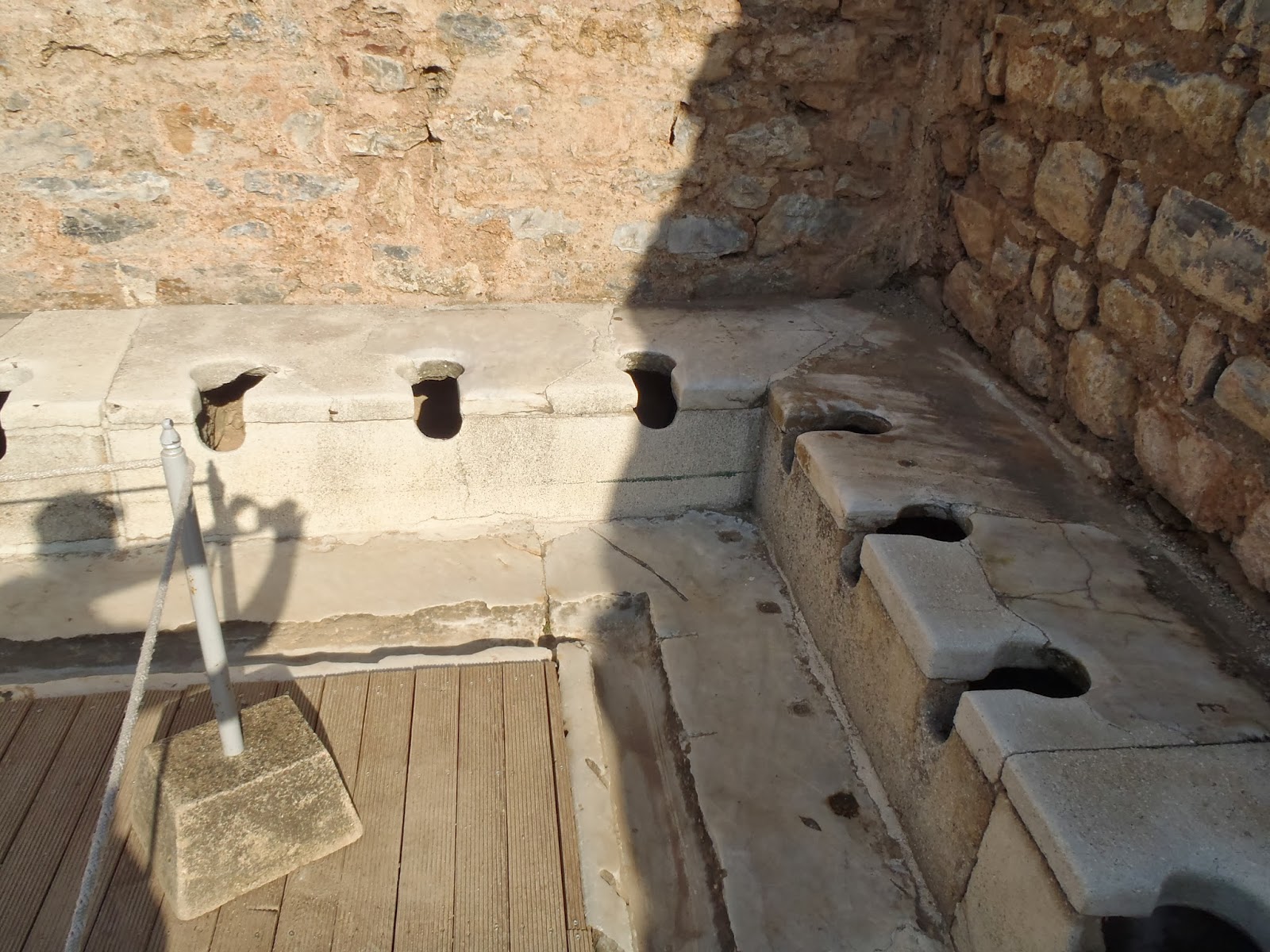 Either would make a fine ridiculous photo op. We just happened to think of it at Hierapolis (#1) but not at Ephesus (#2). 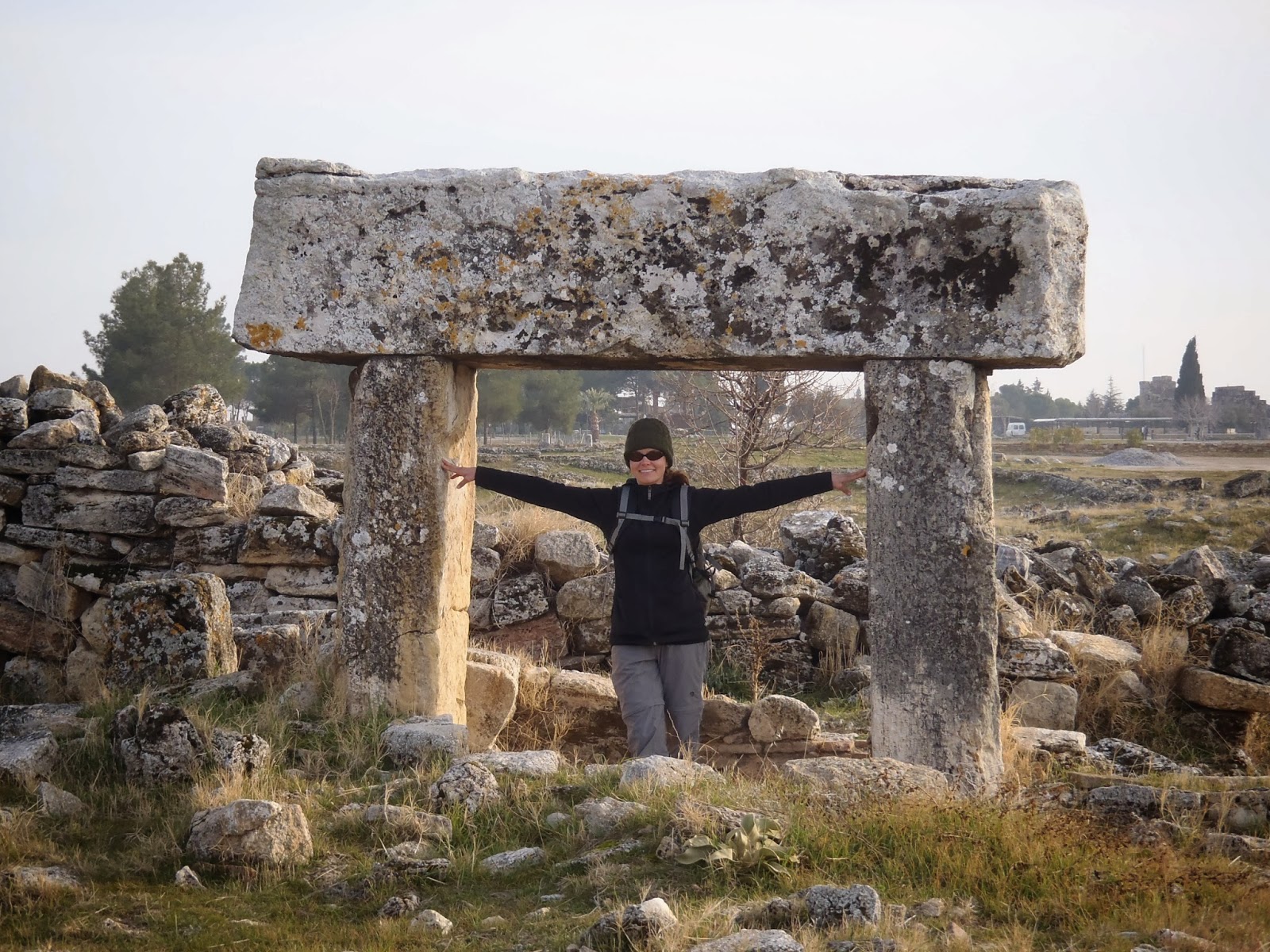 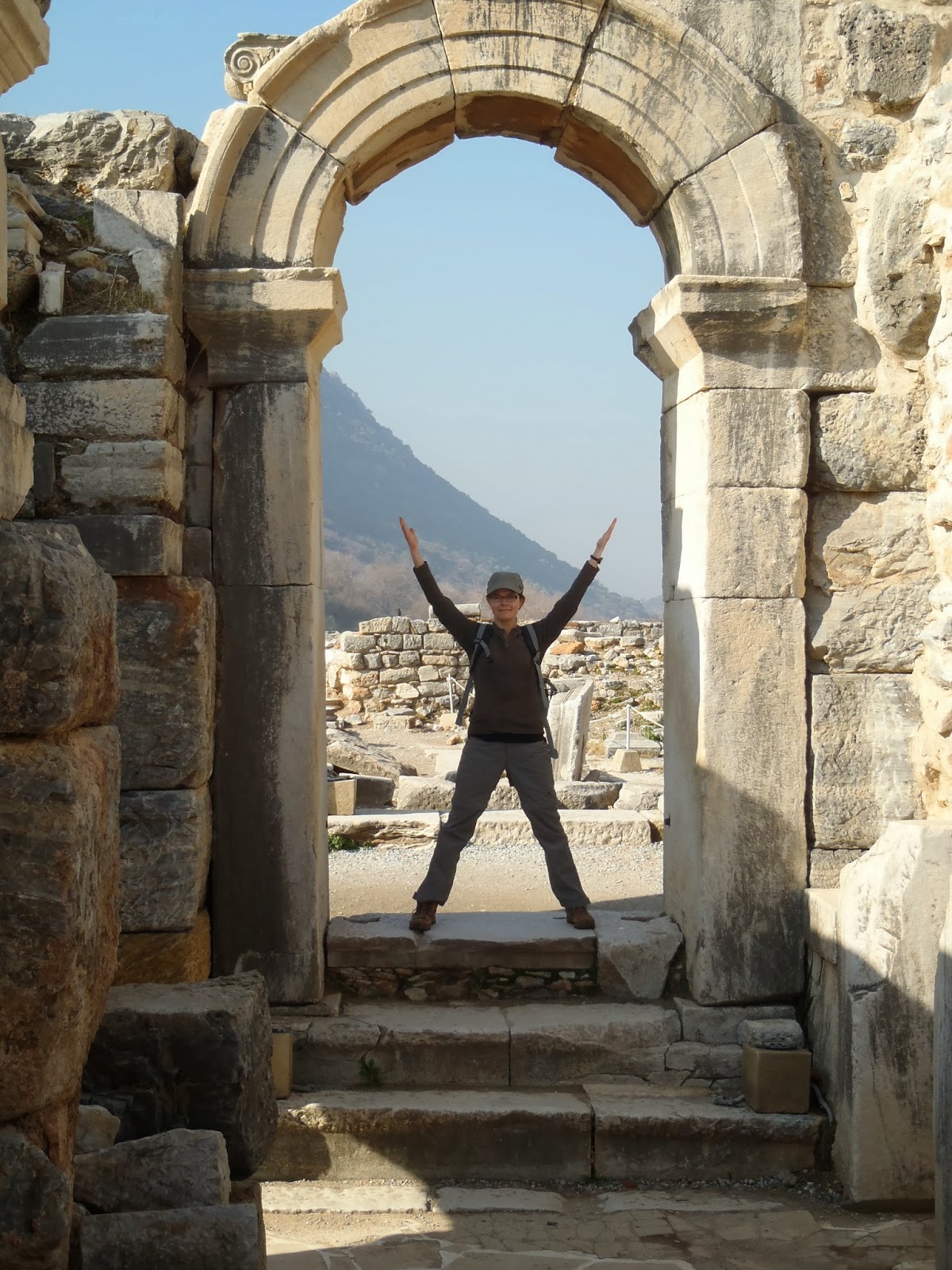 On the sheer scale factor, reconstructed or not, the giant columns and stone walls of Ephesus (#2) trumped Hierapolis (#1). 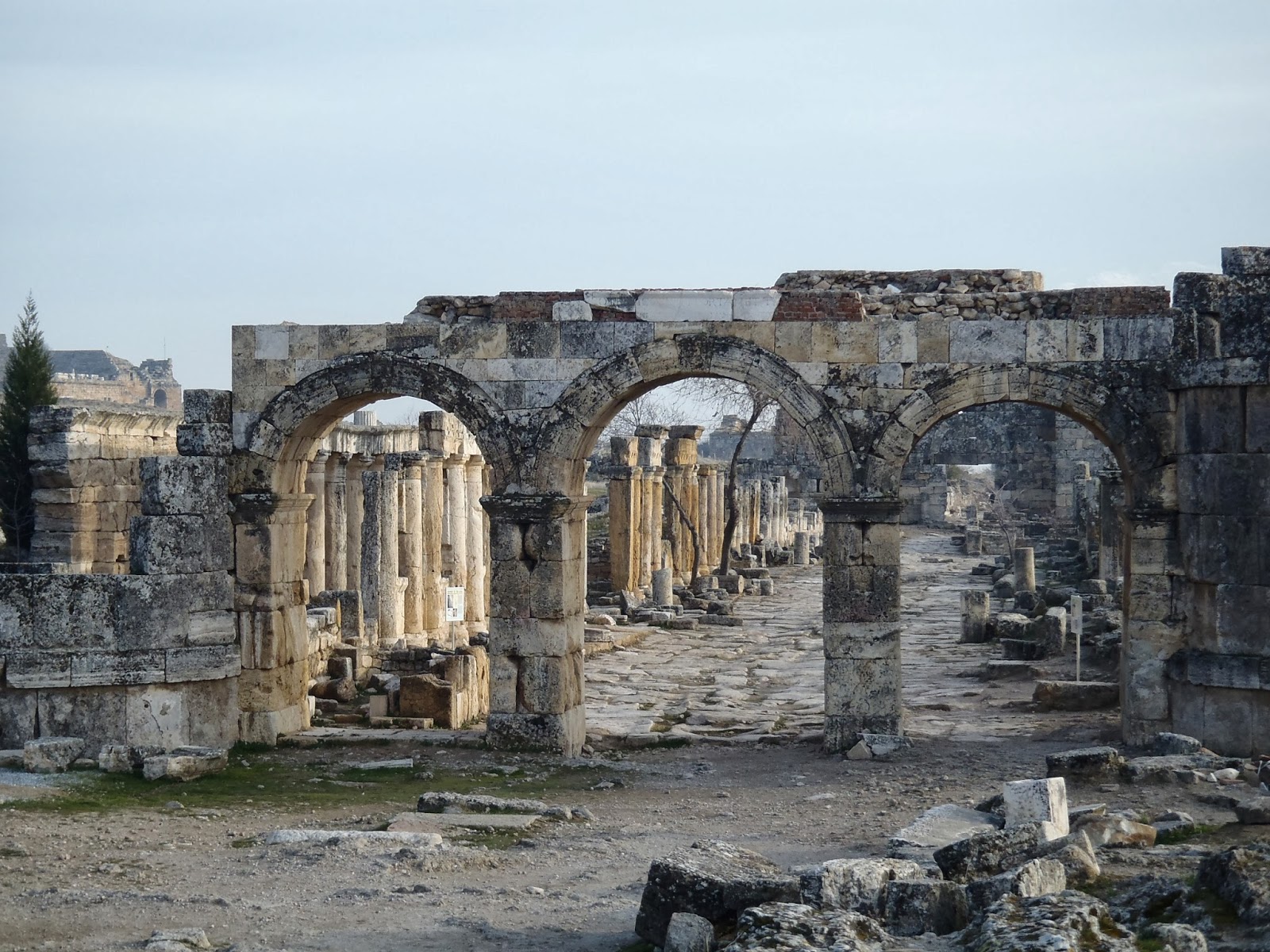 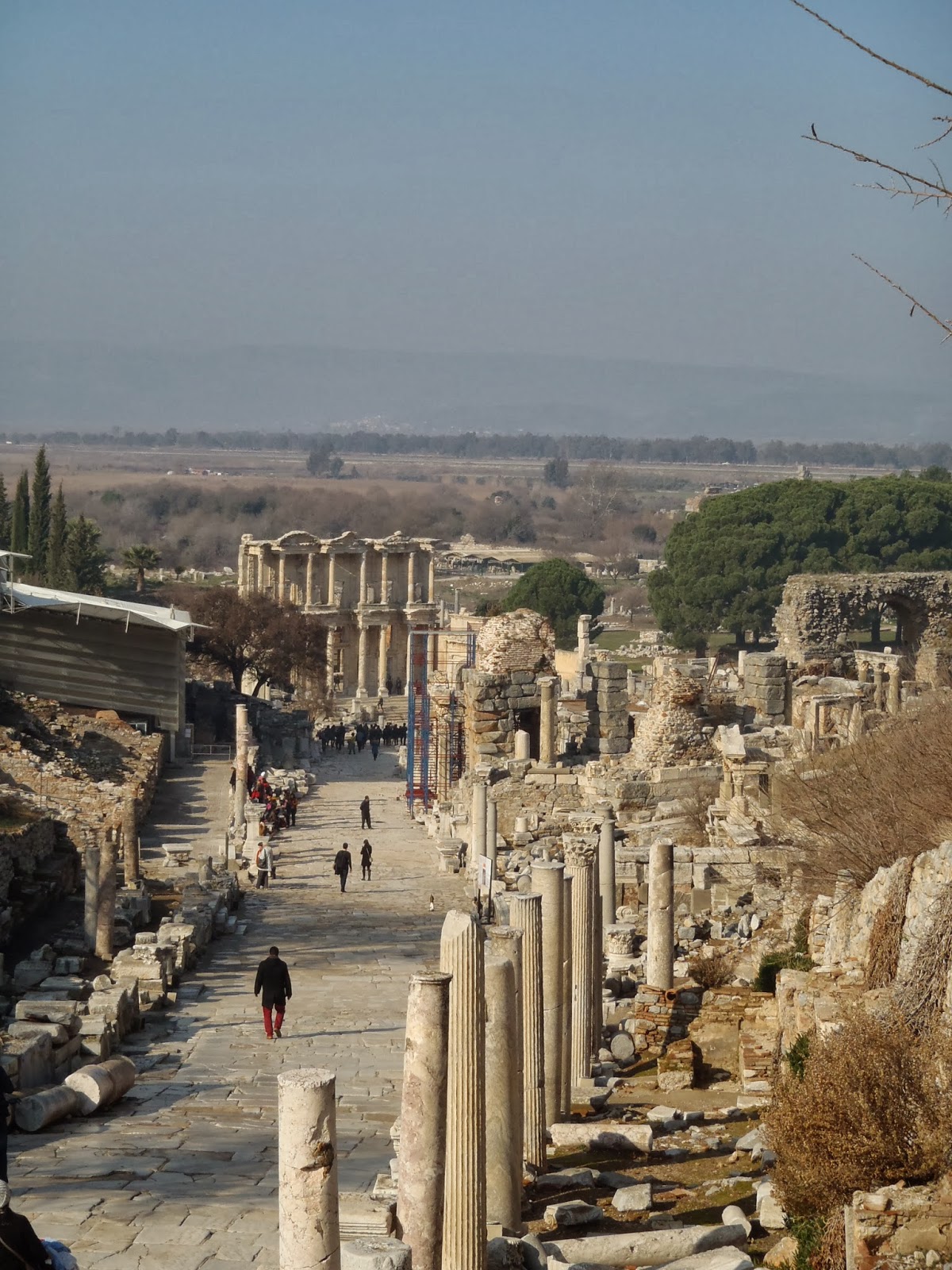 Granted, we went off season and it could have been a whole lot worse at either site. But the people annoyance factor was much higher at Ephesus (#2) than Hierapolis (#1). It was hard to find a moment's peace during our tour of Ephesus, whereas at Hierapolis we sat in silence a lot, just soaking things in.

In addition to all of the above, Hierapolis has an almost completely buried theater (took us a while to find it), ancient baths where you can swim, a nymphaeum with remains of ginormous fountains, and a giant rooster statue. Ephesus, on the other hand, has a stunning library, terraced house displays (extra admission $$), brothel ruins, and lots more signage than Hierapolis.

And let's not forget the random additional stuff. Hierapolis has Pamukkale (included in your ticket price)... 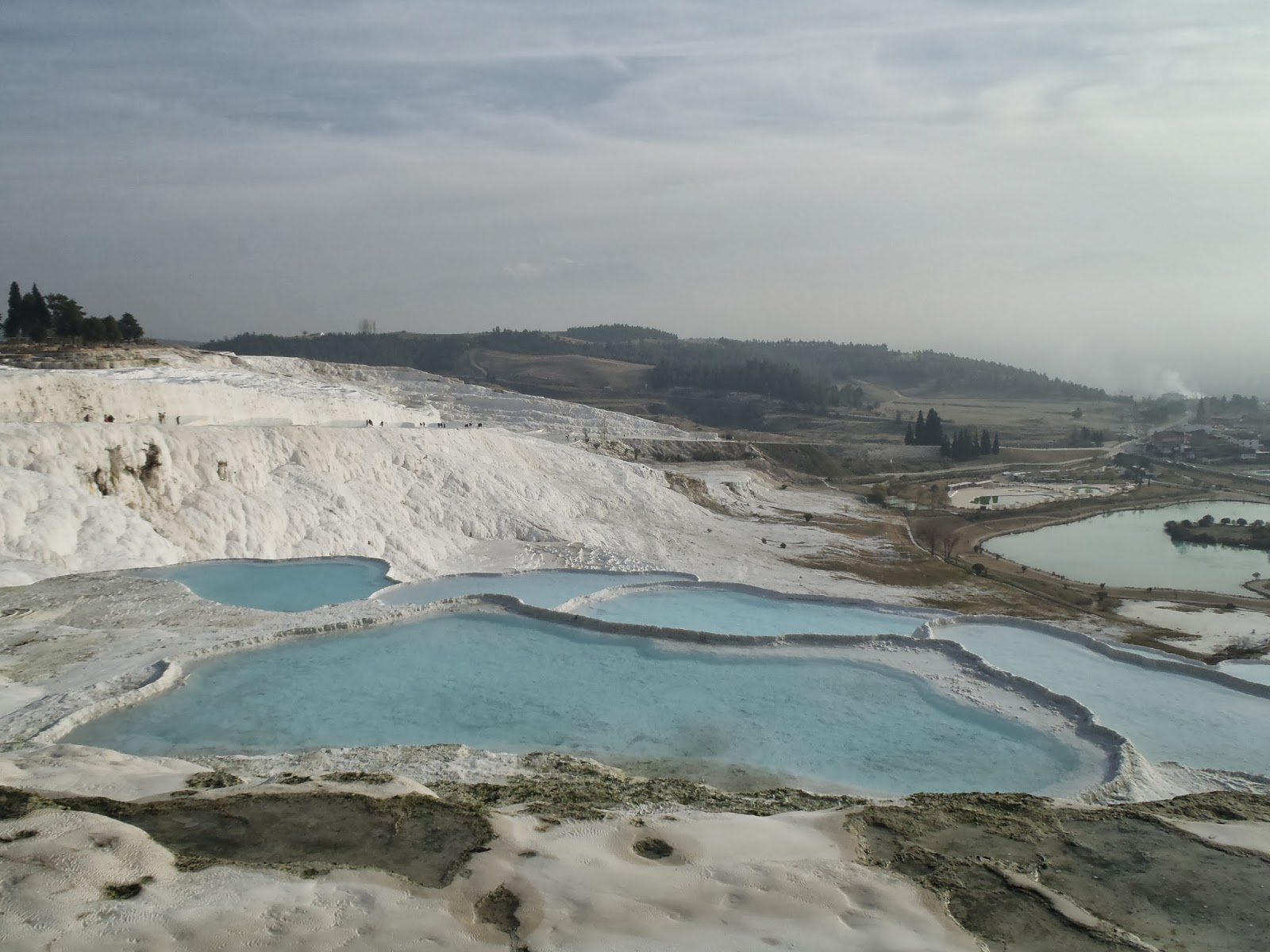 ... "cotton castles" of calcitrate deposits spilling over the mountain. As much as Patrick wanted it to be snow, it wasn't. You can walk around the pools on the upper levels and then walk barefoot down the calcitrate to exit the park. Hot springs (and sometimes lukewarm or cold springs) are nice resting points for photo ops on your way down. A surreal experience, best done at sunset.

Ephesus has the Grotto of the Seven Sleepers... 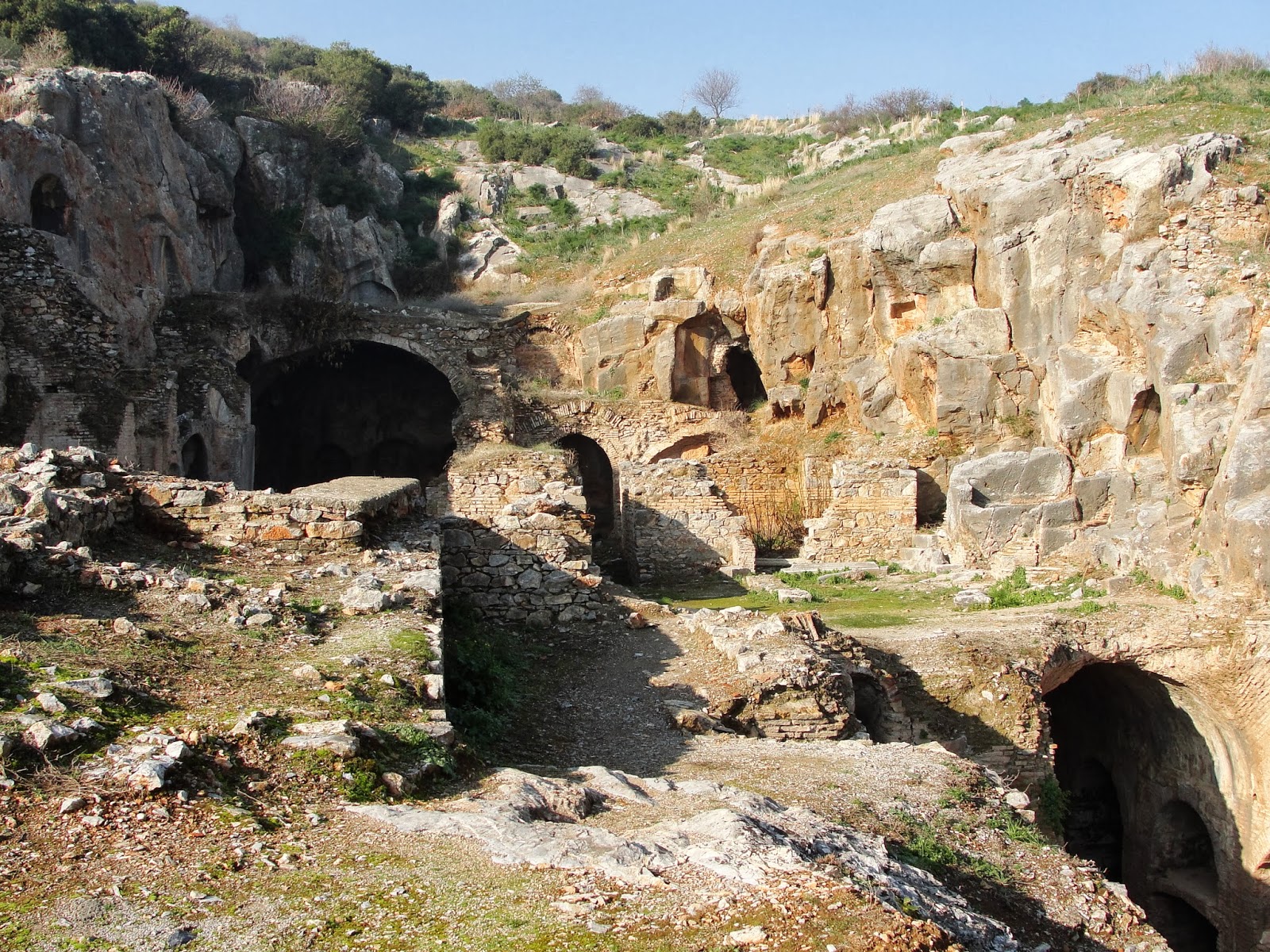 ... which you can't actually walk through, but you can see (for free!) from above near a fenced-off area. It also has one of the seven wonders of the ancient world... 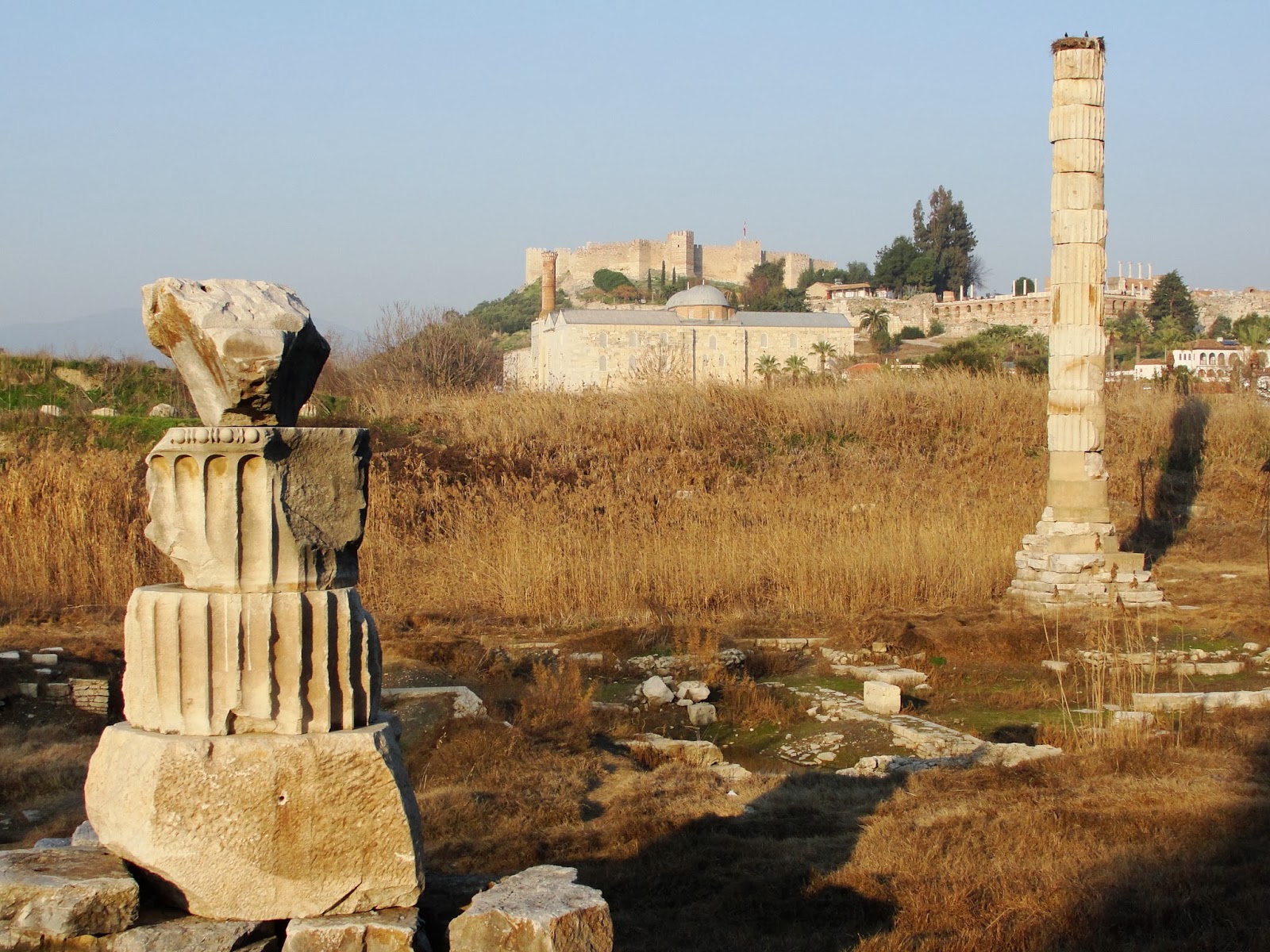 bonus shot: a mosque and a castle

... the Temple of Artemis, where you can just walk around (for free!) after you tour Ephesus. And it has Ayasoluk Castle... 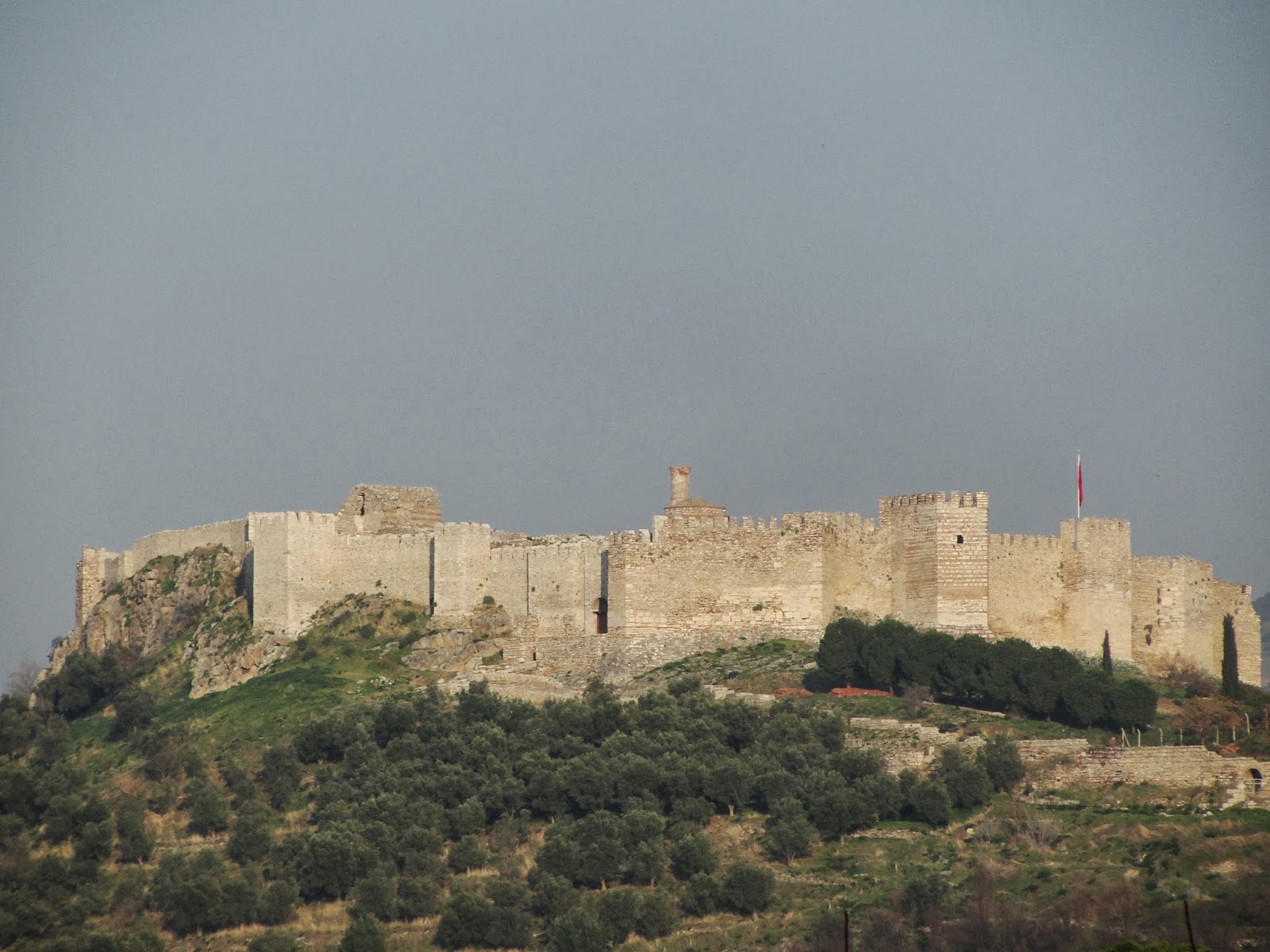 fortress around the tourists

... which was closed for restoration so we don't know how much that costs to visit.

Hierapolis was rough, rugged, spread out across the hillside, and far less restored than crowded, compact, tidy Ephesus. Guess which one we liked better?

Of course we recommend both - they're only a four-hour drive from each other, after all, and when will you be in Turkey again? In hindsight we'd have done the more informative Ephesus before the more serene Hierapolis though. By the time we got to Ephesus we were a bit ruined-out and probably didn't absorb as much as we could have. We also recommend staying in Selcuk rather than Izmir for Ephesus, and afterward the tiny village in Pamukkale would be a nice break from the crazy tourists.

Pamukkale food notes:
Mehmet's Heaven was closed for the night so we stopped in at Mustafa across the street. 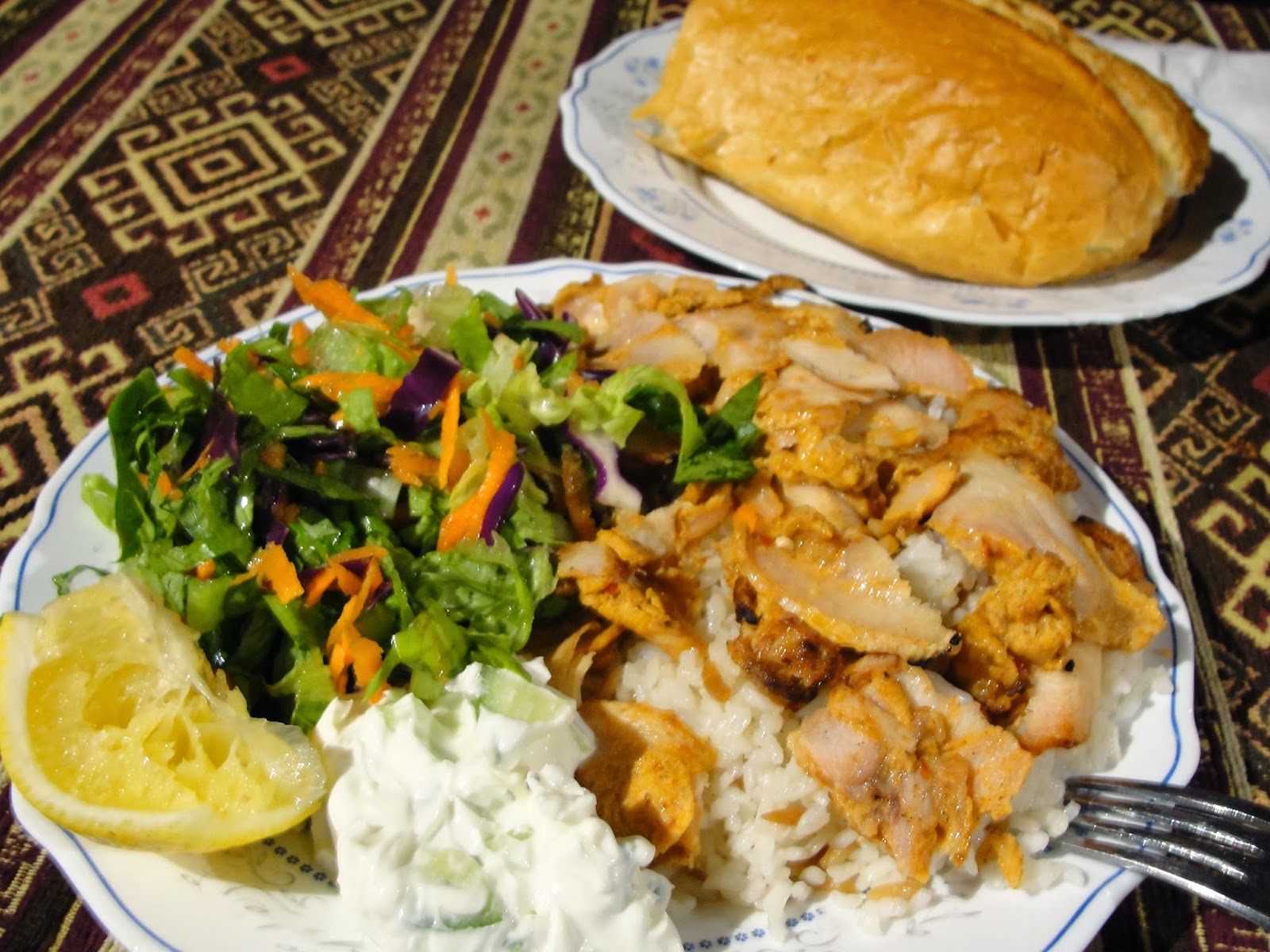 the ambiance was nice, but the food wasn't anything spectacular

The next night Traverten Pide looked about as closed as a restaurant could be, but the owner turned off his soap opera and waved us in anyway.

we very much enjoyed a tomato soup, vegetable pide and chicken shish 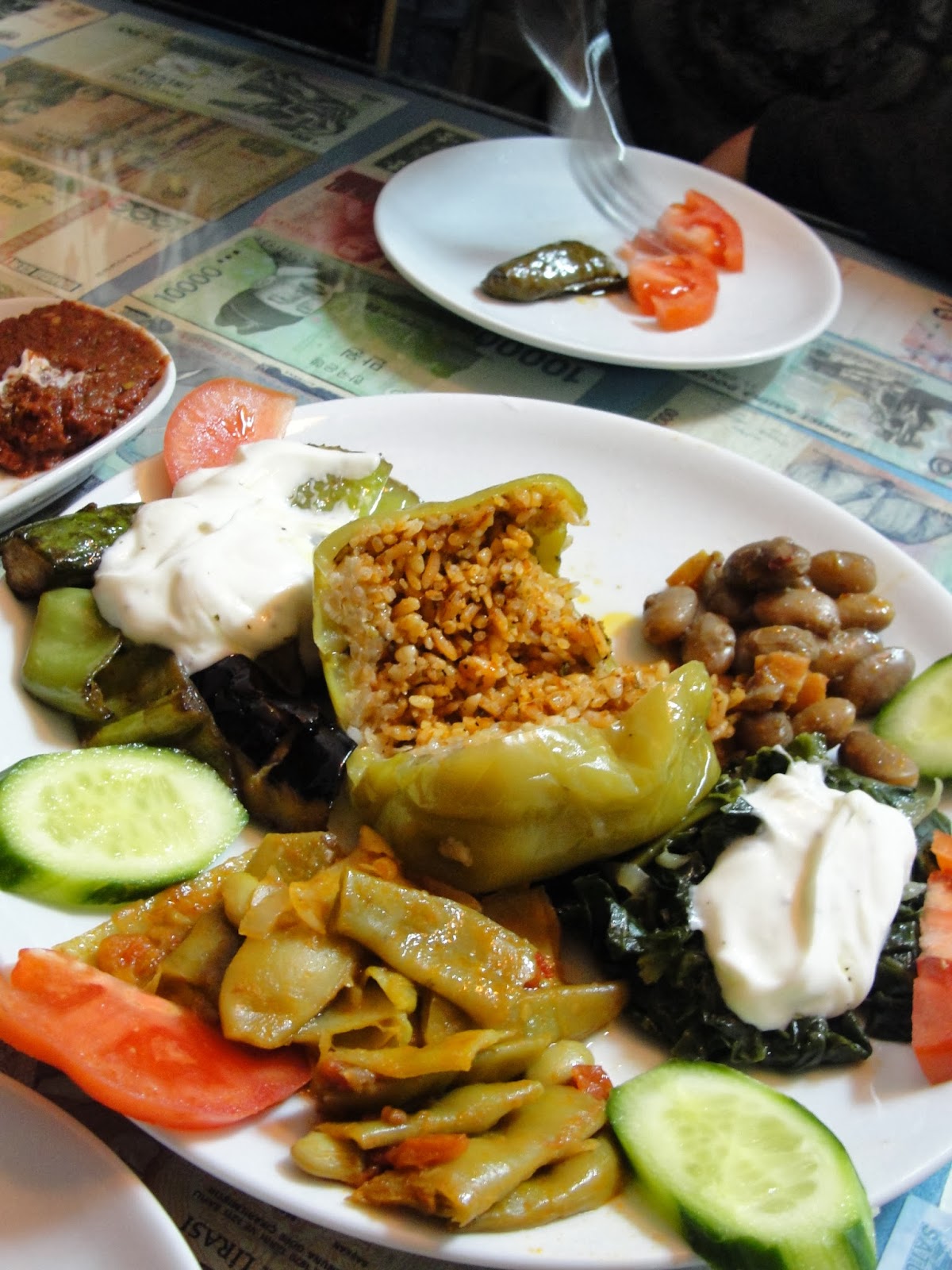 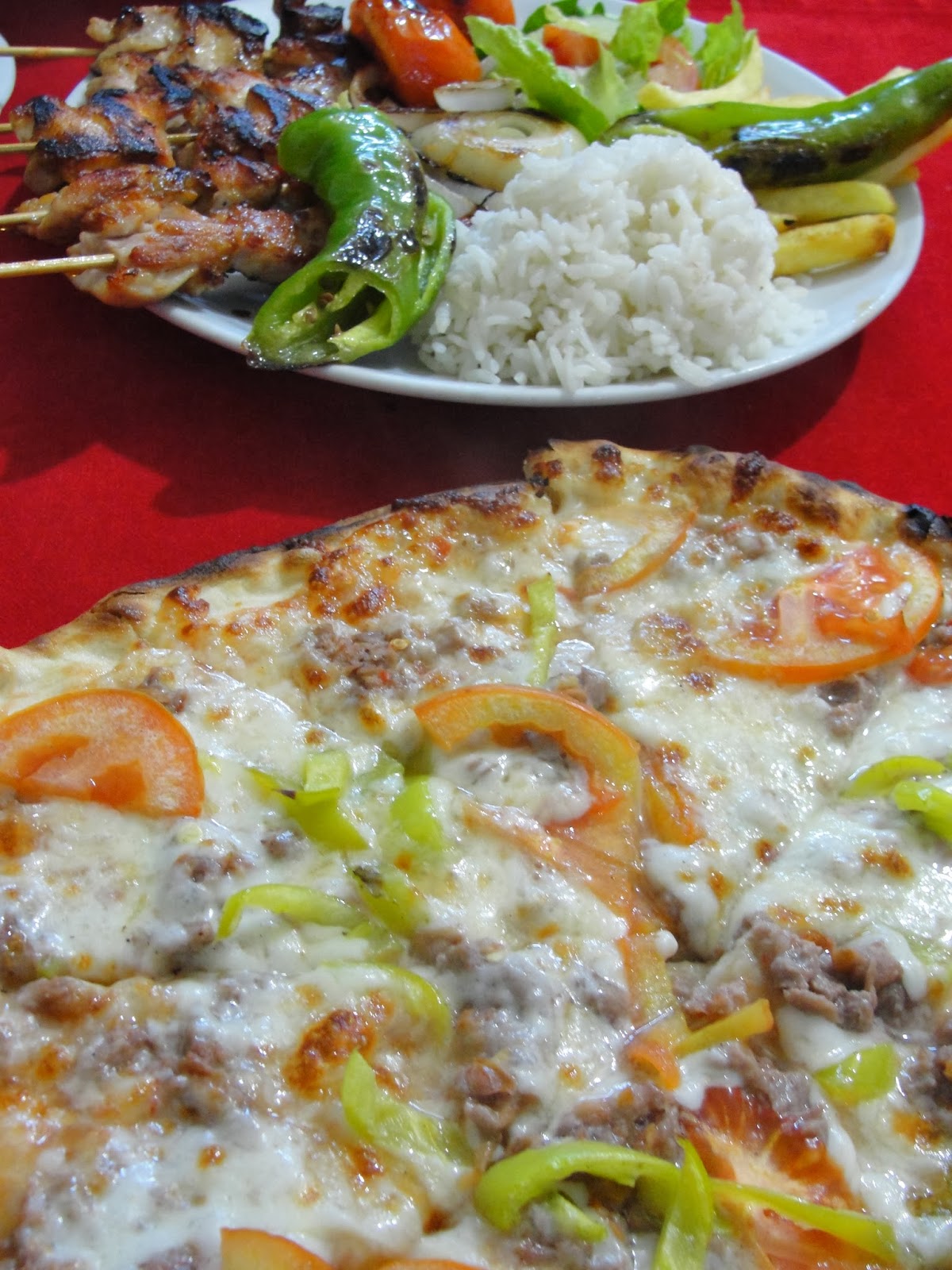 Nur for the best bread EVAH and pizza/chicken shish 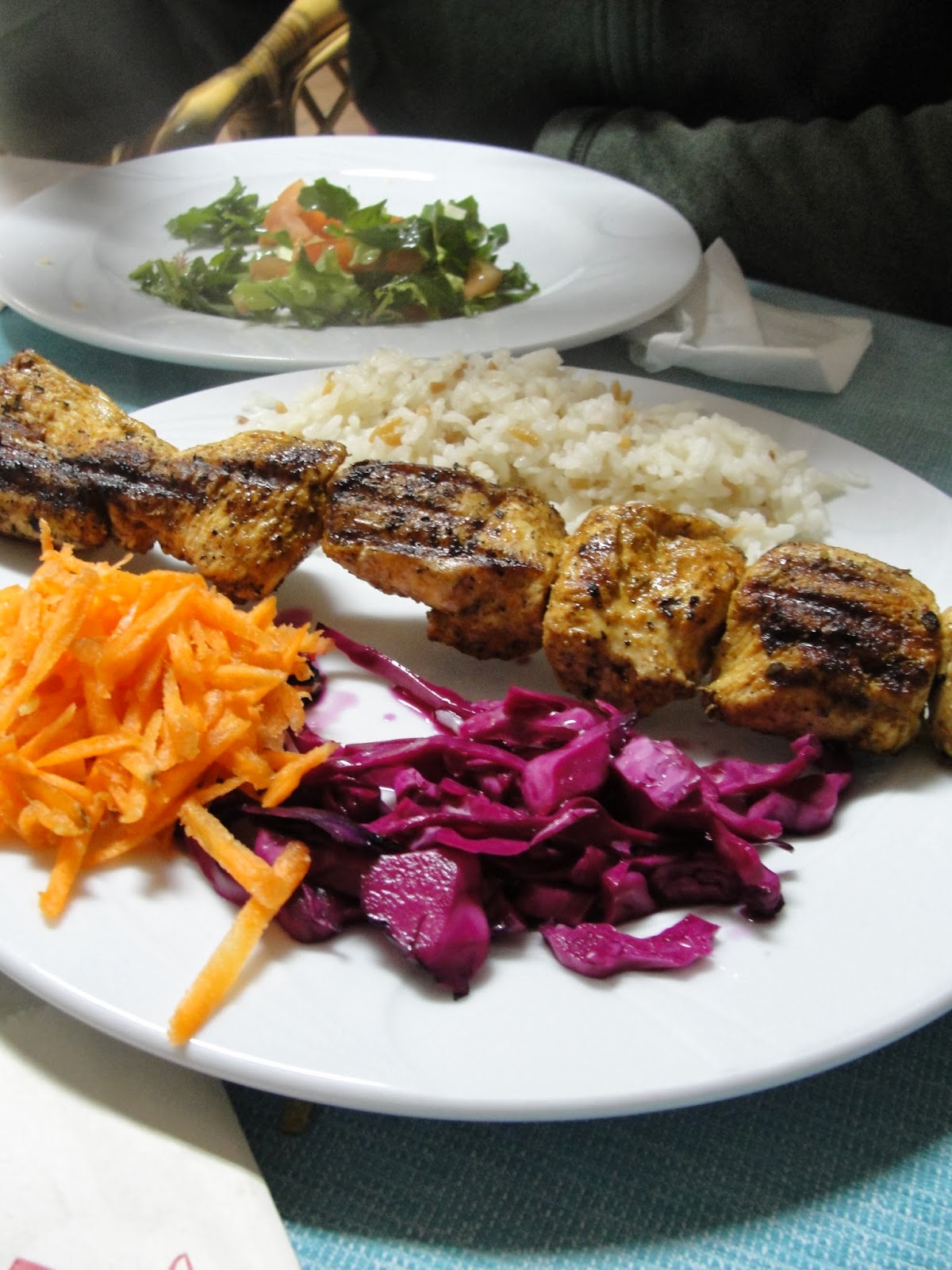 Mahmet's and Tat were good but we wouldn't go back again. Save Nur for last (or just eat there all the time) because you won't want to go anywhere else after you taste their really amazing wood fired breads and pizzas.

Pamukkale lodging notes:
We got a private room at the Ozbay Hotel, right across the street from one of the entrances to Hierapolis. The staff were really nice and helpful, and we had a tea kettle in our room. It's the little things... 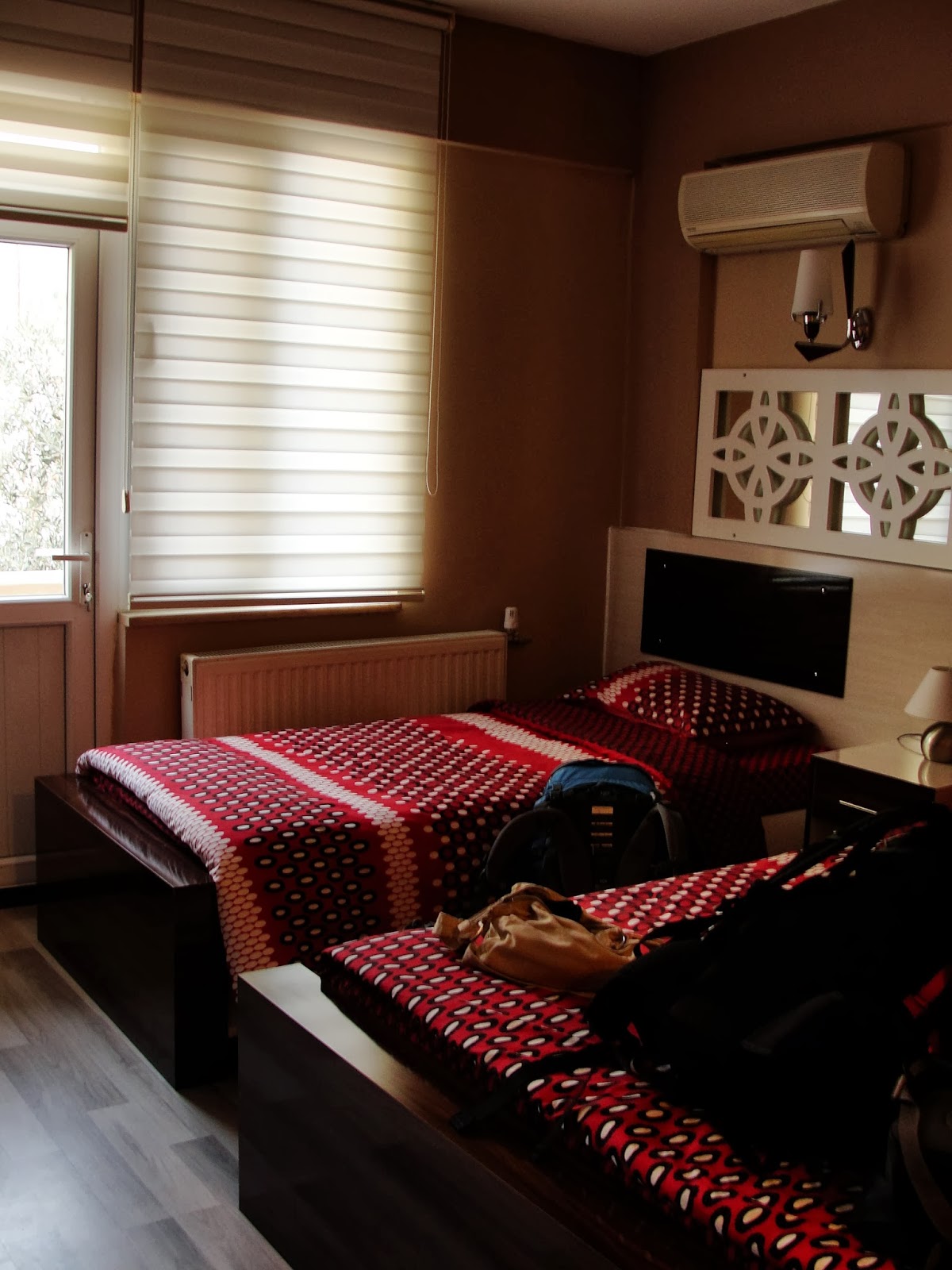 it was swanky and inexpensive 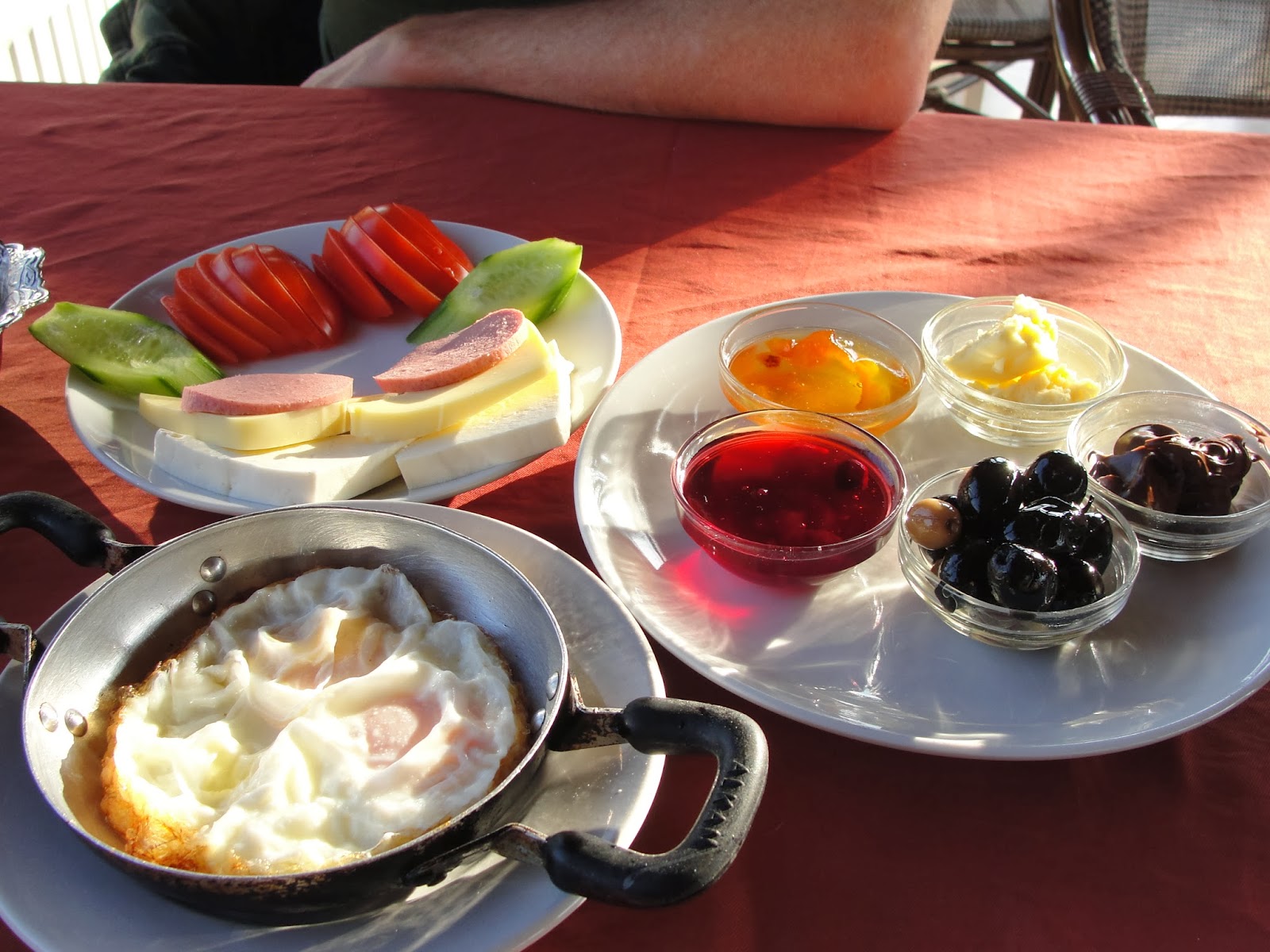 and breakfast was good

Selcuk lodging notes:
At the Artemis Hotel we opted for a four-bed dorm. It was small and not at all swanky, but it had an ensuite bathroom. (And annoying dormmates - not the hotel's fault, of course.) The staff were really nice here as well and the hotel is just a few minutes' walk from the train station. 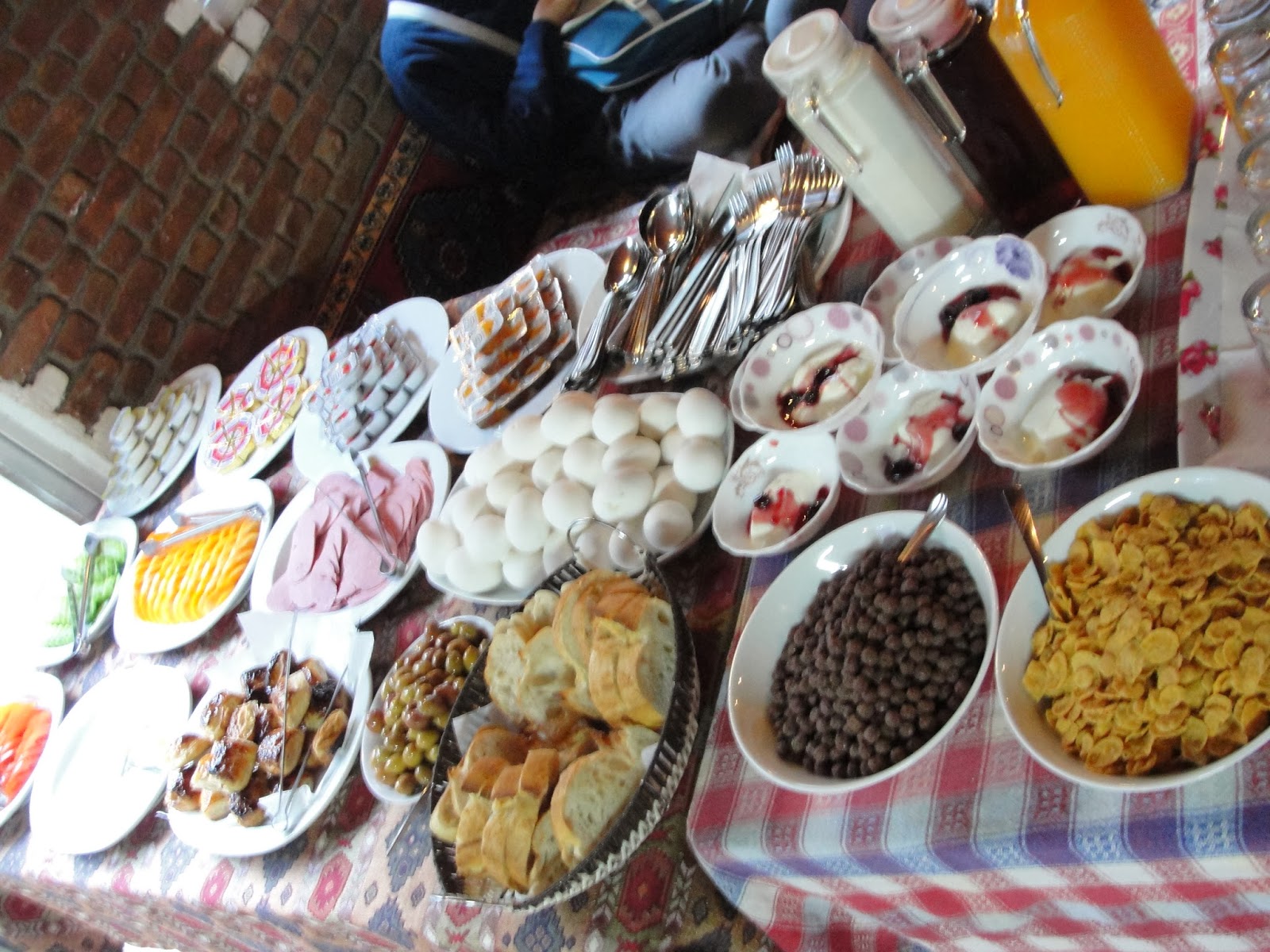 Artemis breakfast - so much fruit!

You reading this - just go. SOON! And have fun. We sure did!
Posted by Slowly Global
Email ThisBlogThis!Share to TwitterShare to FacebookShare to Pinterest
Labels: turkey