Friday five: fun in (and around) Fethiye.

Fethiye is a coastal town on the western Mediterranean side of Turkey. It's surrounded on three sides by mountain peaks, and one side by a gorgeous bay. It's definitely a summer tourist destination but we managed to find good hikes and good eats before and after our five-week farmstay with the horses in Üzümlü. We also managed some fun during our farmstay...

Five Fethiye(ish) outings in between poo duty over the last six weeks, in chronological order:


1. The ghost town in Kayaköy. The trek from Fethiye to Kayaköy (8km one way) started just a few blocks from our pension, meandered along an ancient Roman road in the hills, wound through the dirt roads of a tiny agricultural village, and ended right in front of the ghost town entrance. 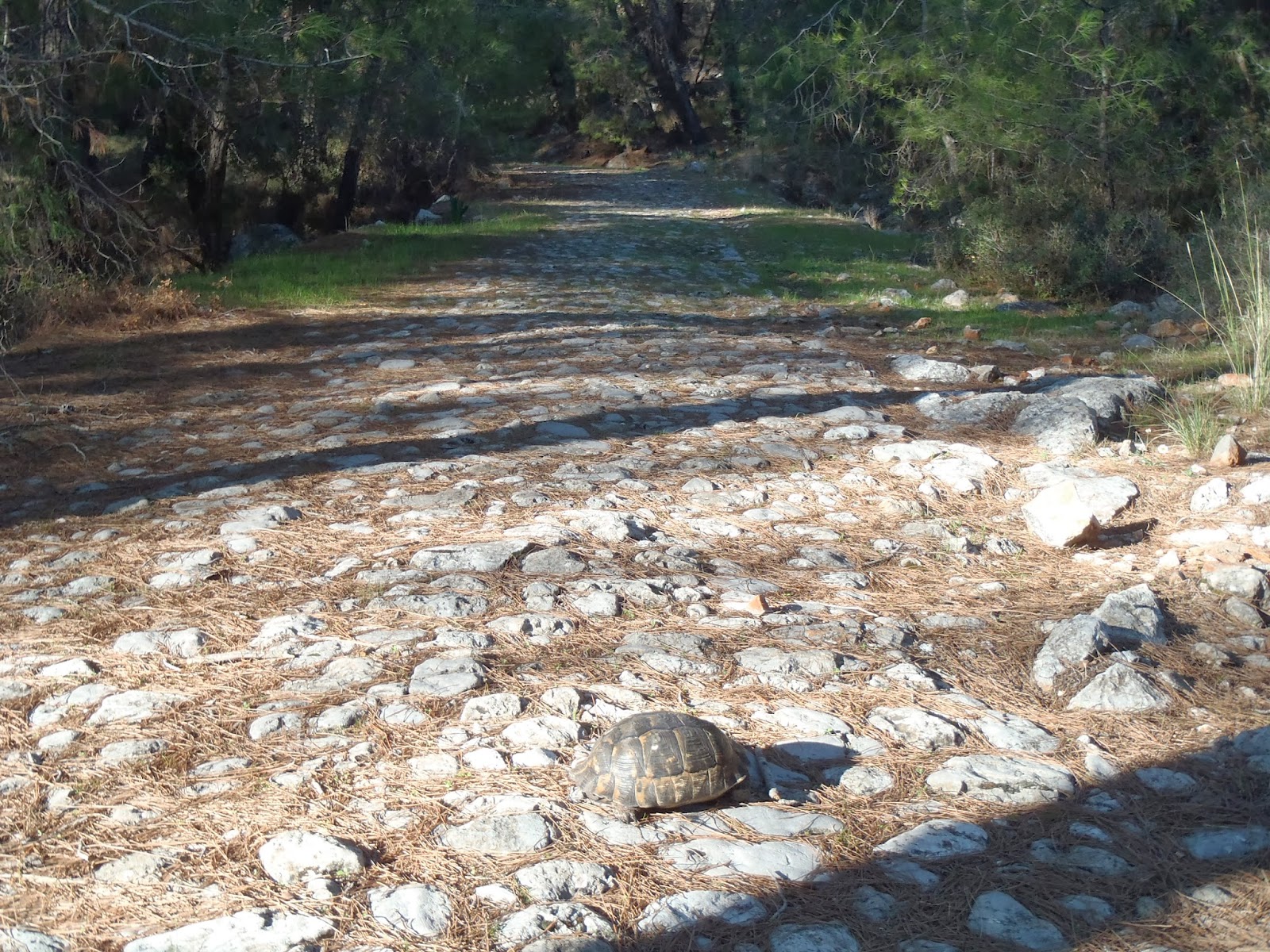 We spent over an hour wandering among just a handful of the 500 homes built to house thousands of Greeks who would abandon them in the 1920s when they were relocated back to their home country. 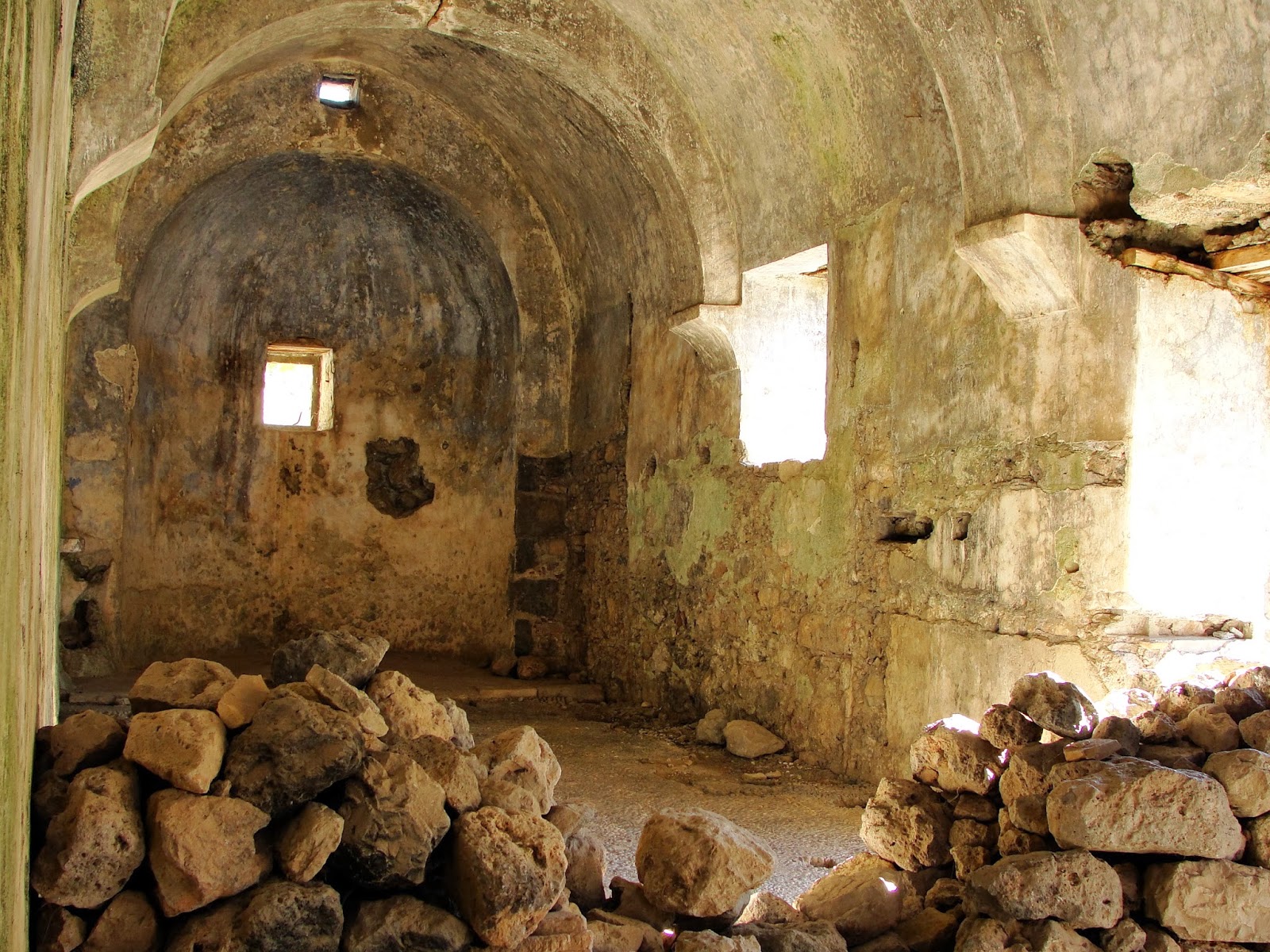 lots of churches too

Just like the wild west ghost towns we've visited, Kayaköy was simultaneously spooky and fascinating. And the layout of the village was impressive. Not only was it incredibly compact, it was also constructed so that no building cast a full shadow on another building at any time of the day. 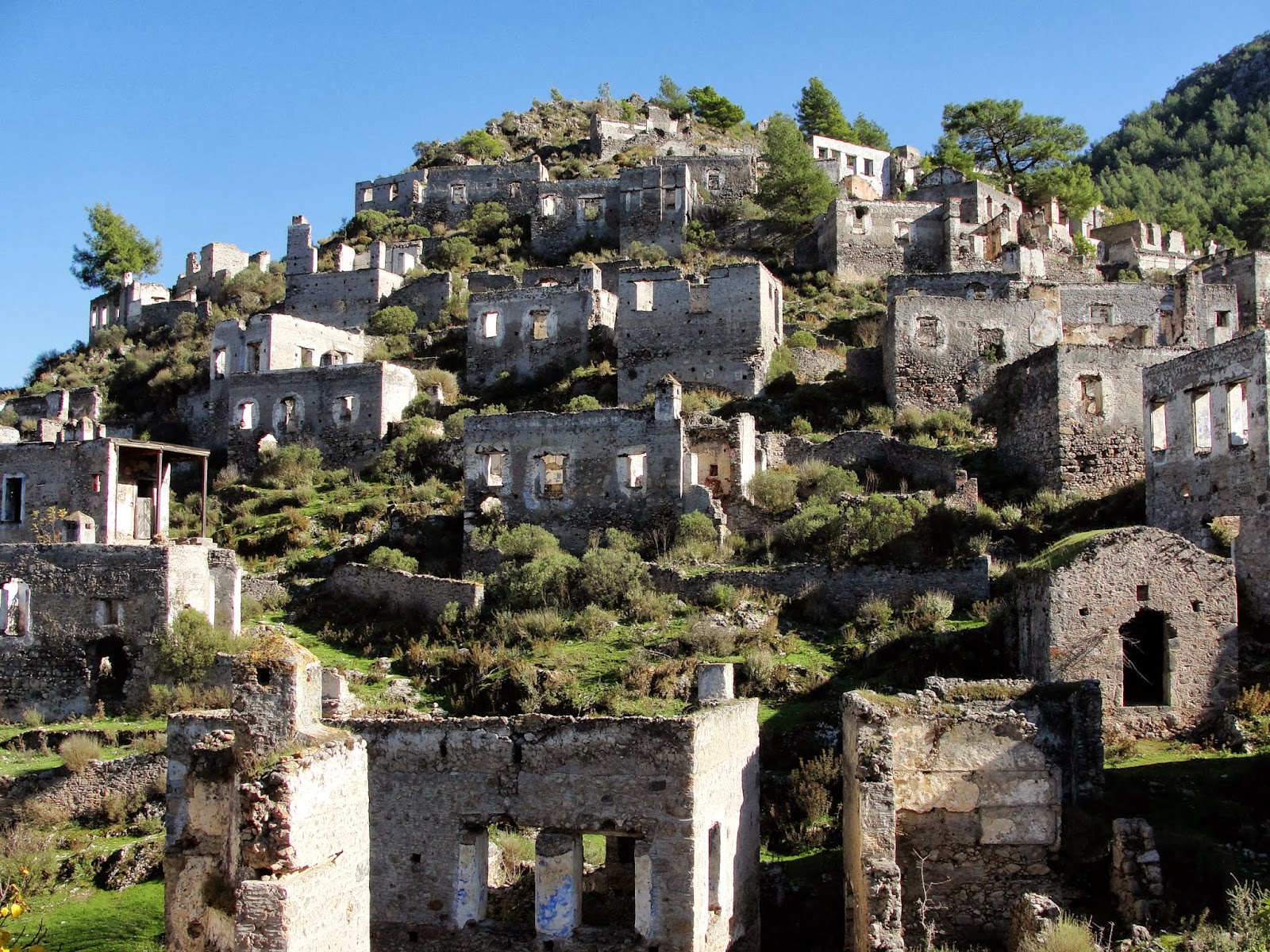 vampires would love it

The magnitude of the ghost town surprised us and the recent occupation added to the eerie feel. And like many of our forthcoming hikes, it smelled wonderful from all the wild oregano and thyme!

2. The ruins of Kadyanda (Cadianda). This trek started about a quarter mile from our horse hosts' villa in Üzümlü. We and The Czech headed out after chores one morning and, a few hours later, had a picnic lunch near the ancient baths. 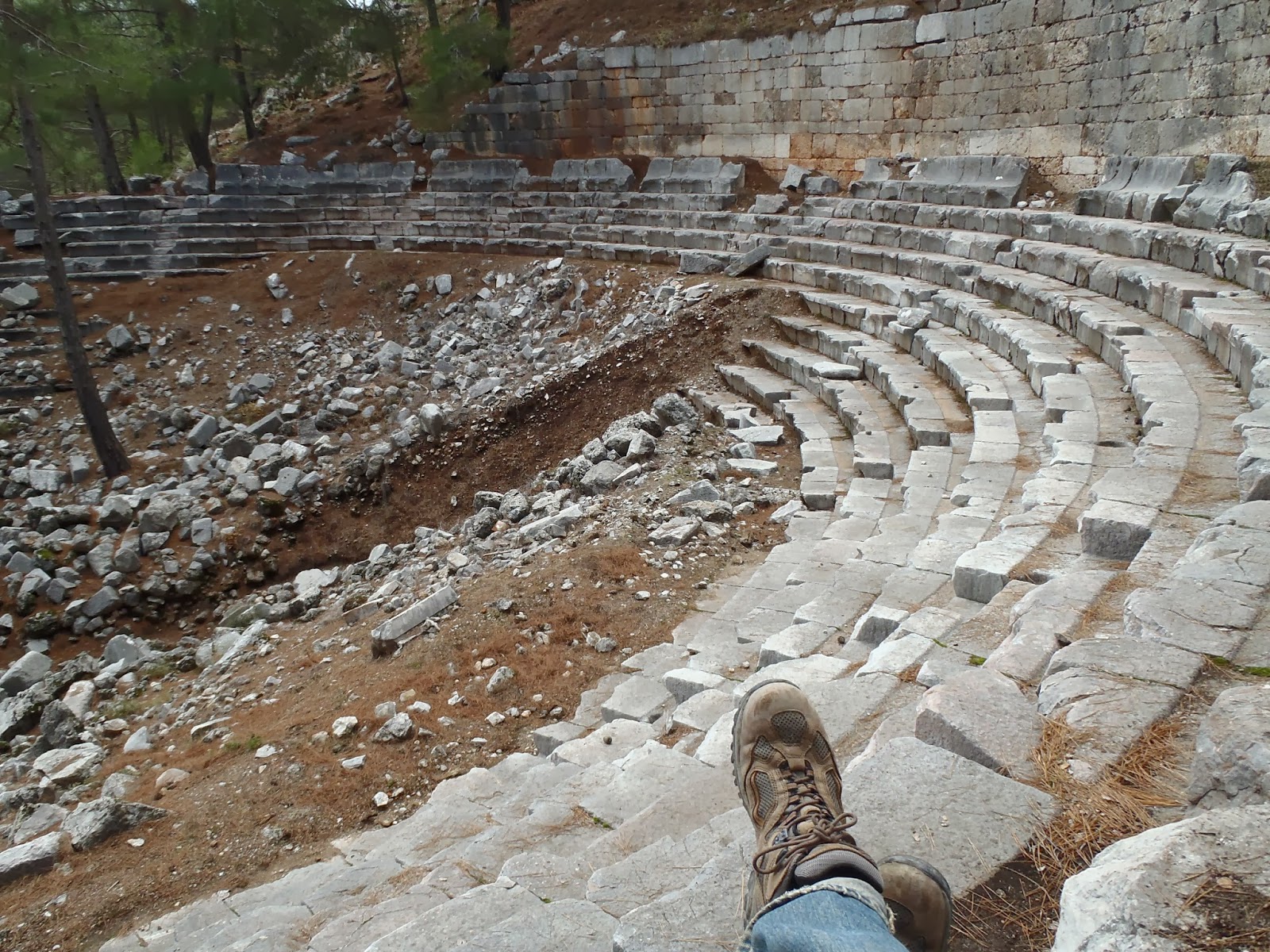 waiting for the show
The site was really nicely laid out with helpful signs at each major section.  There was more to it than we expected, including unprotected 15-foot deep holes where they once stored water.  Don't take your toddlers on this one.
3. The watchtower hike. We really have no idea how far we trekked; we also don't know if the mountain actually has a name. All we know is that we left our hosts' villa shortly after 8am and didn't get back until 3:30pm. And that it was all uphill and downhill. And that three quarters of the way through it, we started to get that familiar Tunnel Falls "seems like a good idea until you hit mile 10 and still have 2 miles to go" feeling... all of which led us to put this watchtower hike at about 10 miles. 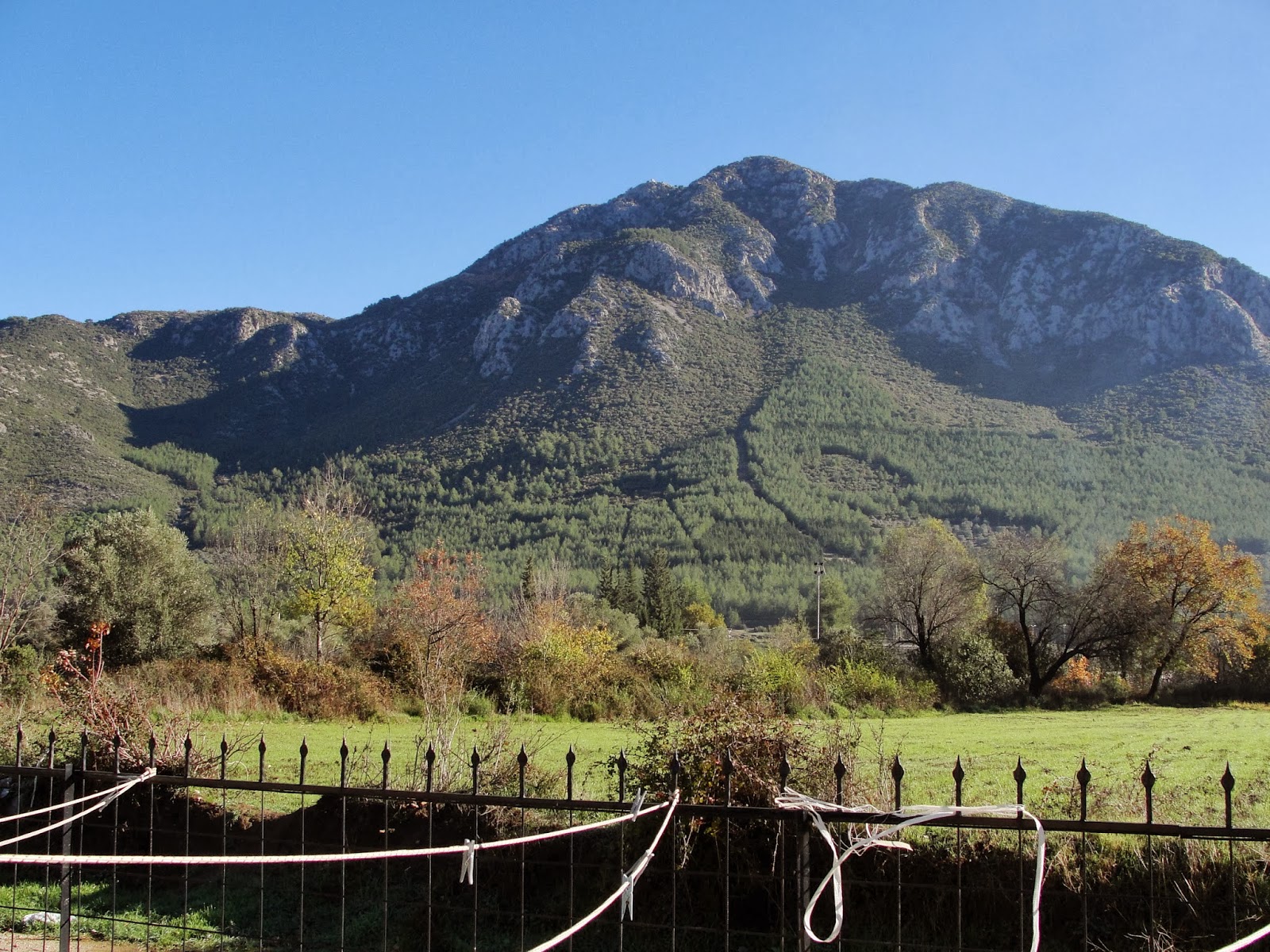 the challenge, as seen from our balcony
(your challenge: find the watchtower)

We stared at the watchtower at the top of the mountain from the horse paddock for three weeks, plotting and scheming our route (there is no set trail most of the way up the mountain). We even made one half-hearted attempt before setting our minds to it Christmas Eve. The trek up was somewhat strenuous but the forest was peaceful and green, so we didn't mind the effort. About three quarters of the way up, we reached a large pasture where goats were grazing and we followed the dirt road from there up to the watchtower. 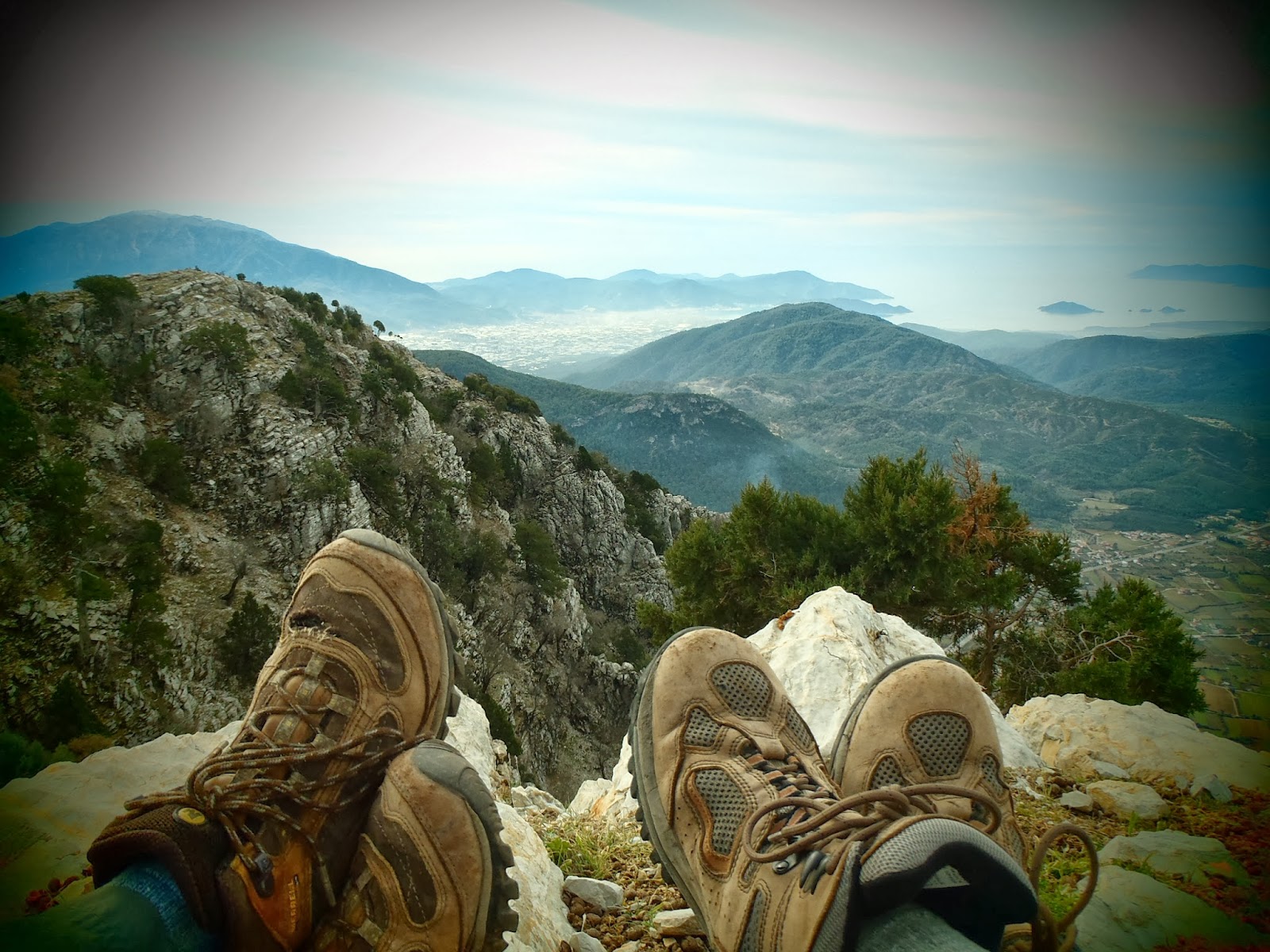 our lunch spot
(it was alright)

We opted to follow the creek bed on the way down. It was upper arm and knee-bending bouldering work the entire way, but it was a whole lot of fun. 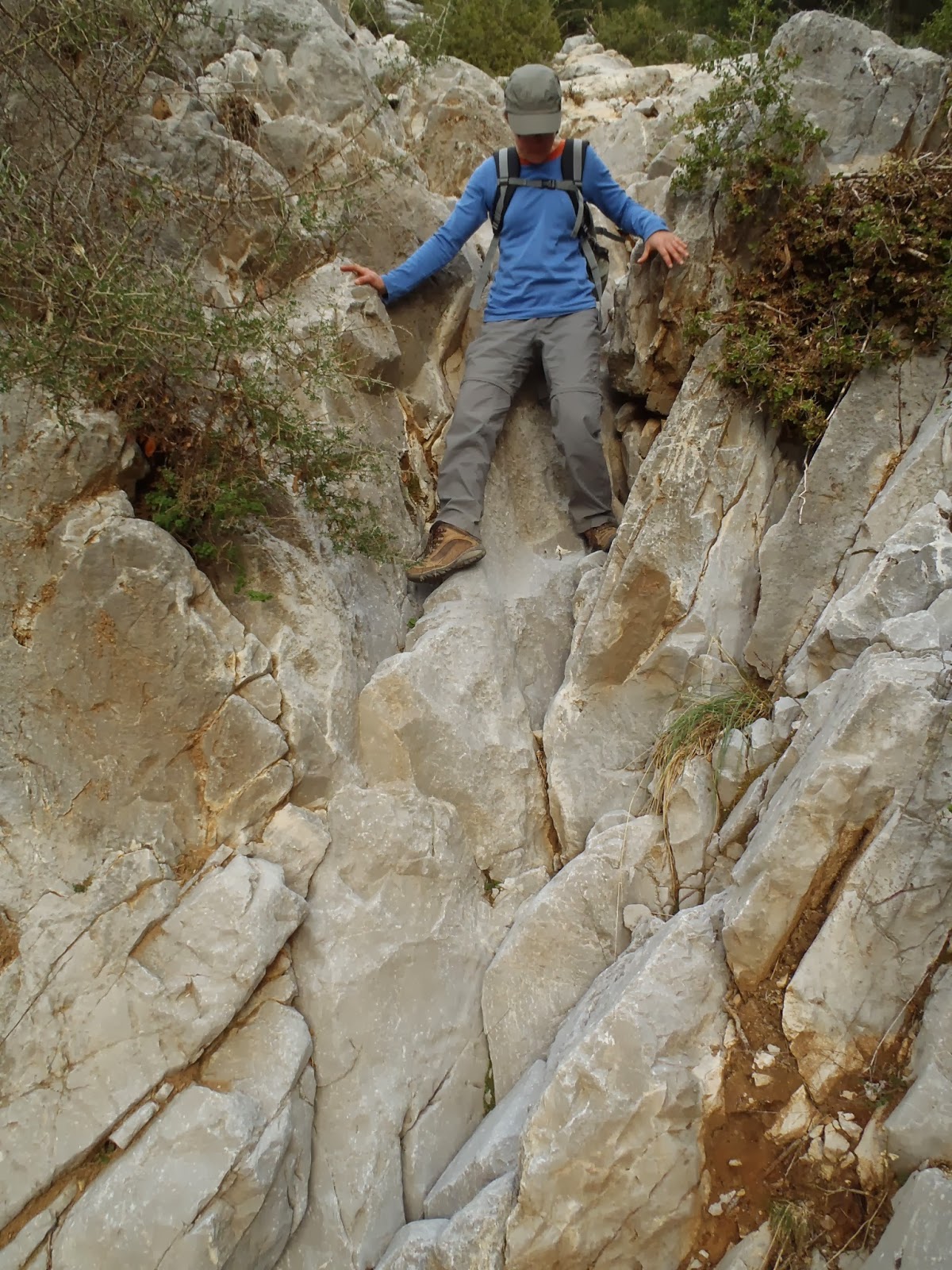 fun until hour #2 of this, anyway

4. The whirlwind day trip around Üzümlü. New Year's Eve, we and The Aussie had two destinations in mind; everything else we could squeeze in was gravy. With a rental car at our disposal we found a lot of gravy.

Tlos was one destination. All the ruins we've encountered have been unique; this was one of the largest that was inhabited fairly recently (if three centuries counts as "recent"). It was fairly well-preserved, expanse, and possibly due to the holiday, free! Our favorite word. 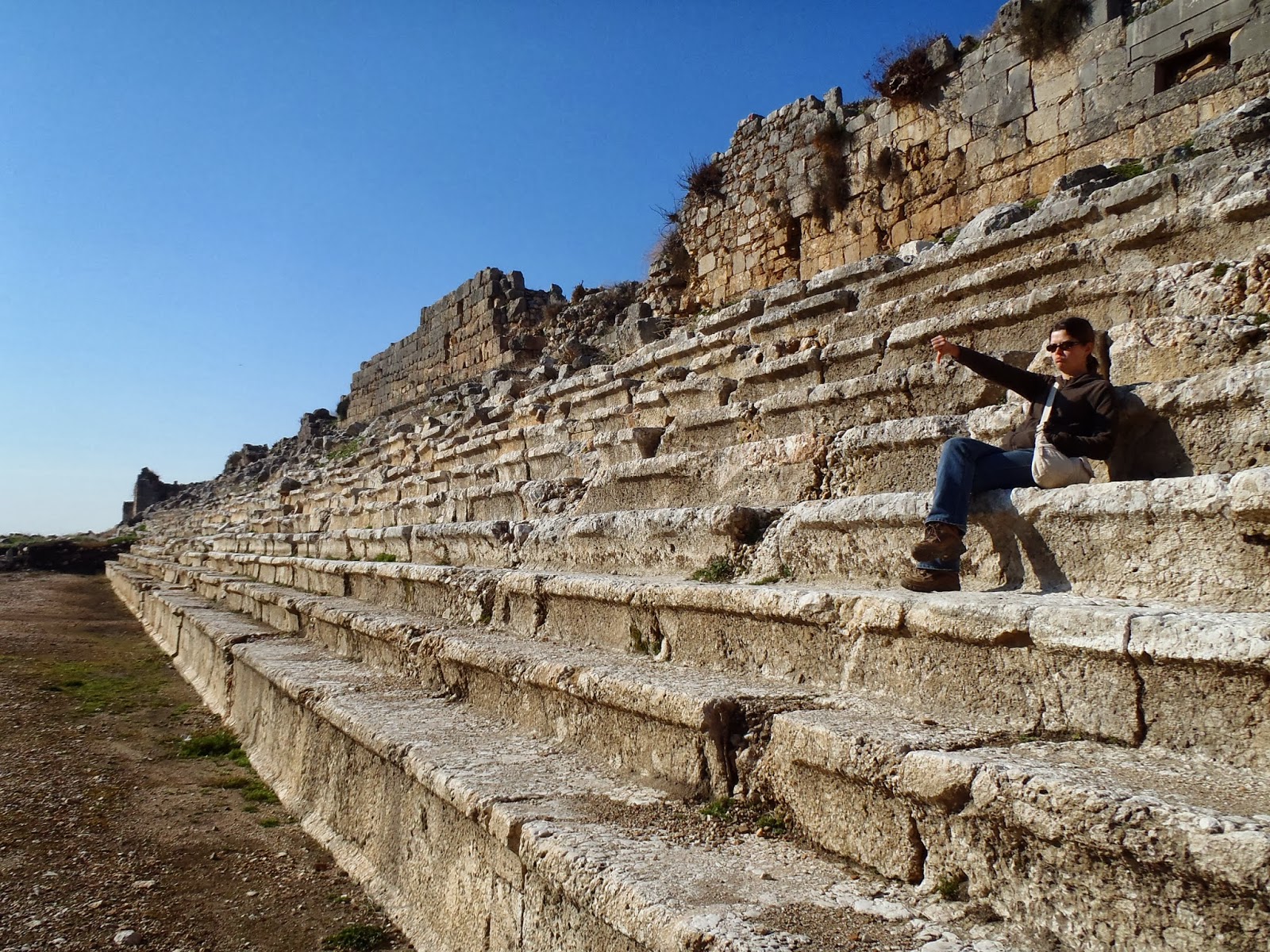 he lives to fight another day

Saklikent Gorge, one of the deepest canyons in the world, was the other planned destination. In the summer you can wade through shallower parts and hike almost 20km. In the winter, not so much - unless you are crazy, have a wetsuit, or don't mind freezing to death. What little we were able to see was still totally worth the ~$3 admission though. The canyon walls were narrower and taller than any we'd seen, and the water rushing through the gorge drowned out any other noise. We couldn't hike so we absorbed the sights and sounds for a while and moved on.

We tried to find Xanthos but couldn't (and we were even sadder about this when we learned it was a UNESCO World Heritage Site), so we turned left at Esen and wound our way up narrow canyon roads to the lesser-visited ruins at Sidyma. A little old woman greeted us and, after changing her shoes, gave us a brief tour of the ruins while she collected firewood. 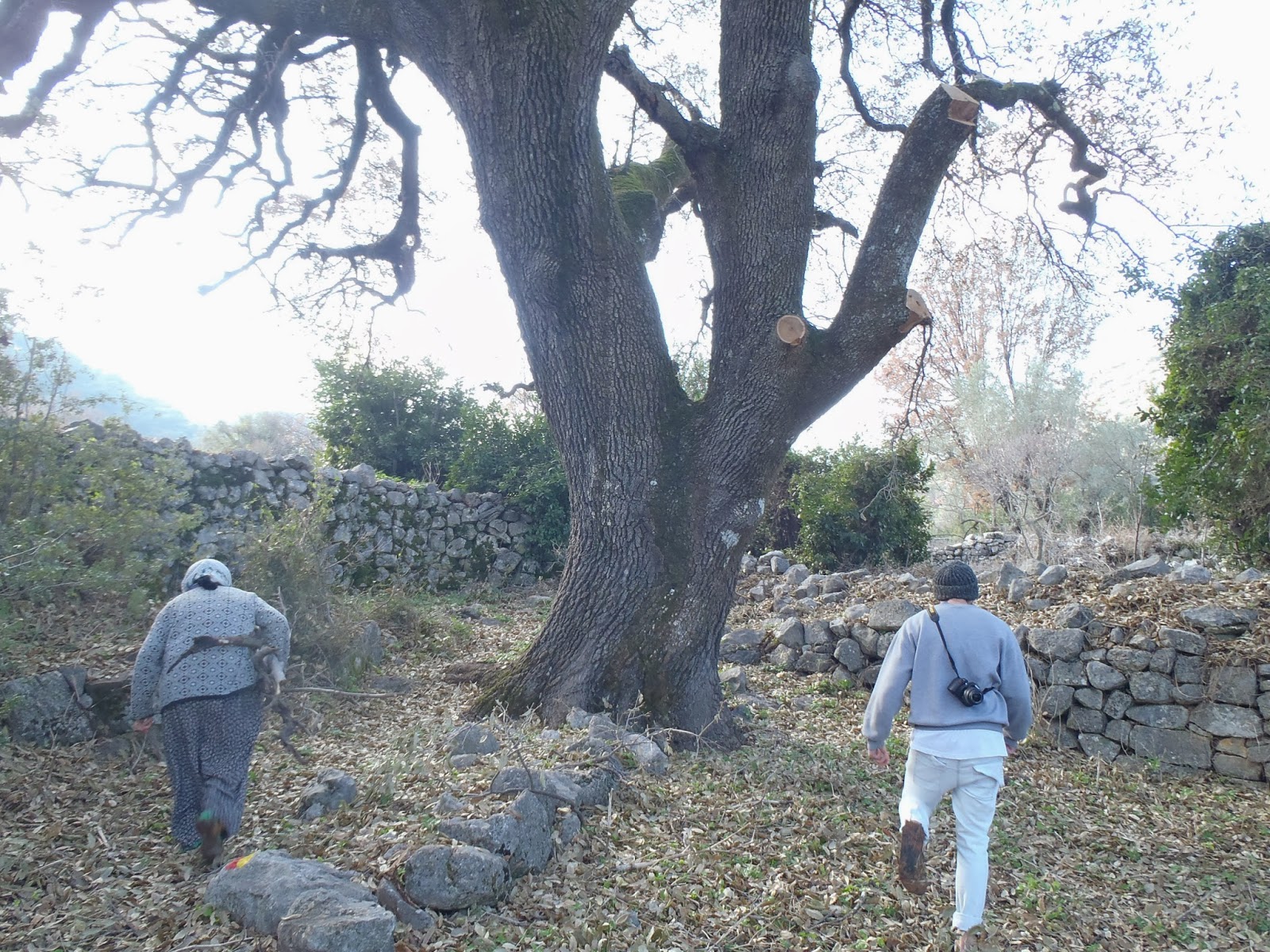 our guide and The Aussie

The ruins were spread out around the site, and we appreciated her random pointing and one-word explanations ("church", "medusa", "Roman") as she led us through mucky trails and goat poo. She invited us for lunch afterward but we were losing daylight so we politely declined, gave her a few lire for her trouble, and moved on.

Lunch and a beach visit in picturesque Ölüdeniz, where we may have also seen the Blue Lagoon, back through Kayaköy to show The Aussie the ghost town, and a sunset stop to end our New Year's Eve adventure. All in all, a great day.

5. Last but not least, the Aktas Beach hike right before we left town. The bus ride alone was worth the $13 round trip for this outing. 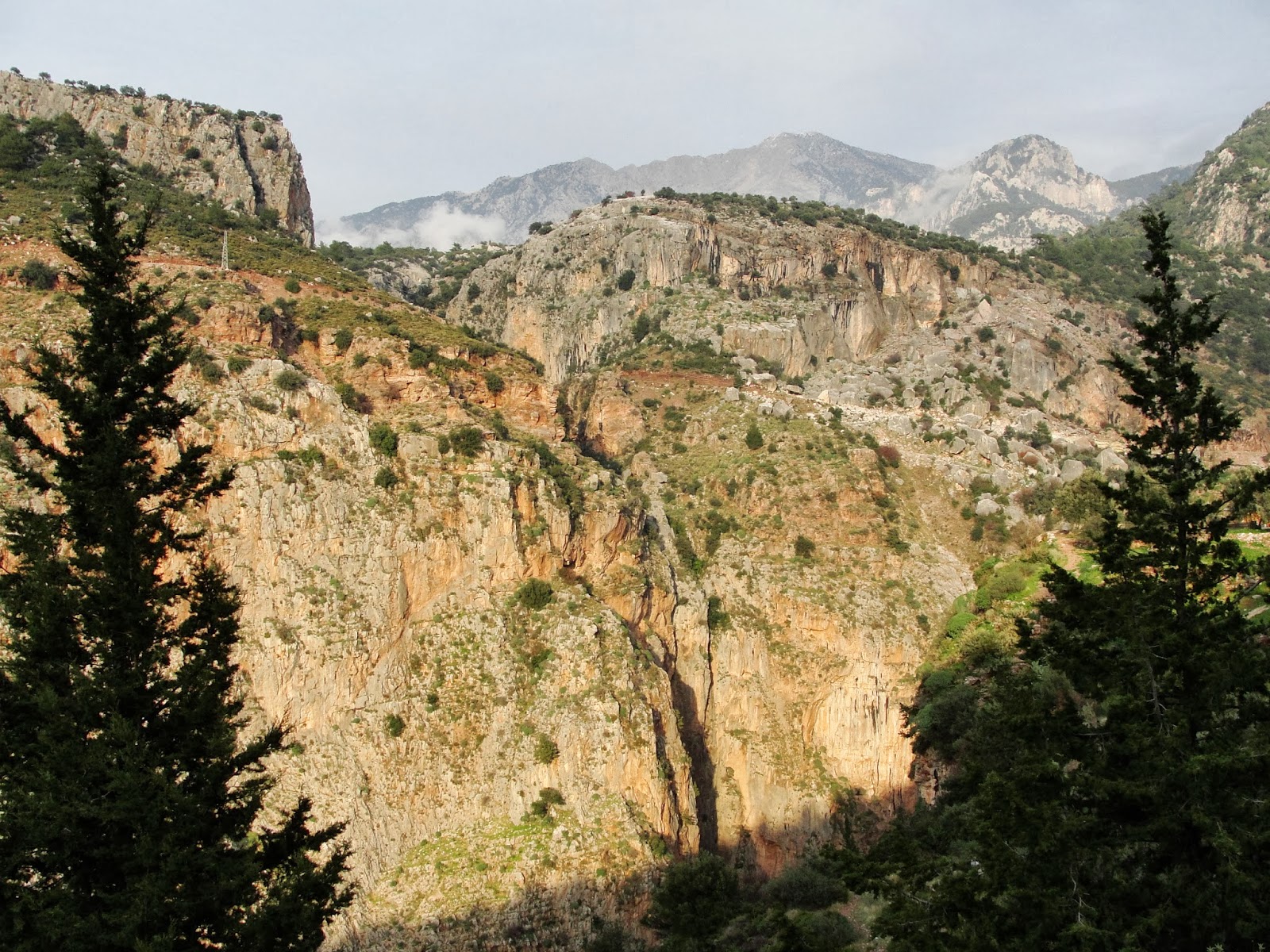 somewhere on that cliff is the road
the bus drove along

Faralya is an easy day trip from Fethiye. It's home to Butterfly Valley and you can also hike there, but we opted to turn left at the fork instead. The views from the coastal cliffs (and of the opposite coastal cliffs) were breathtaking. 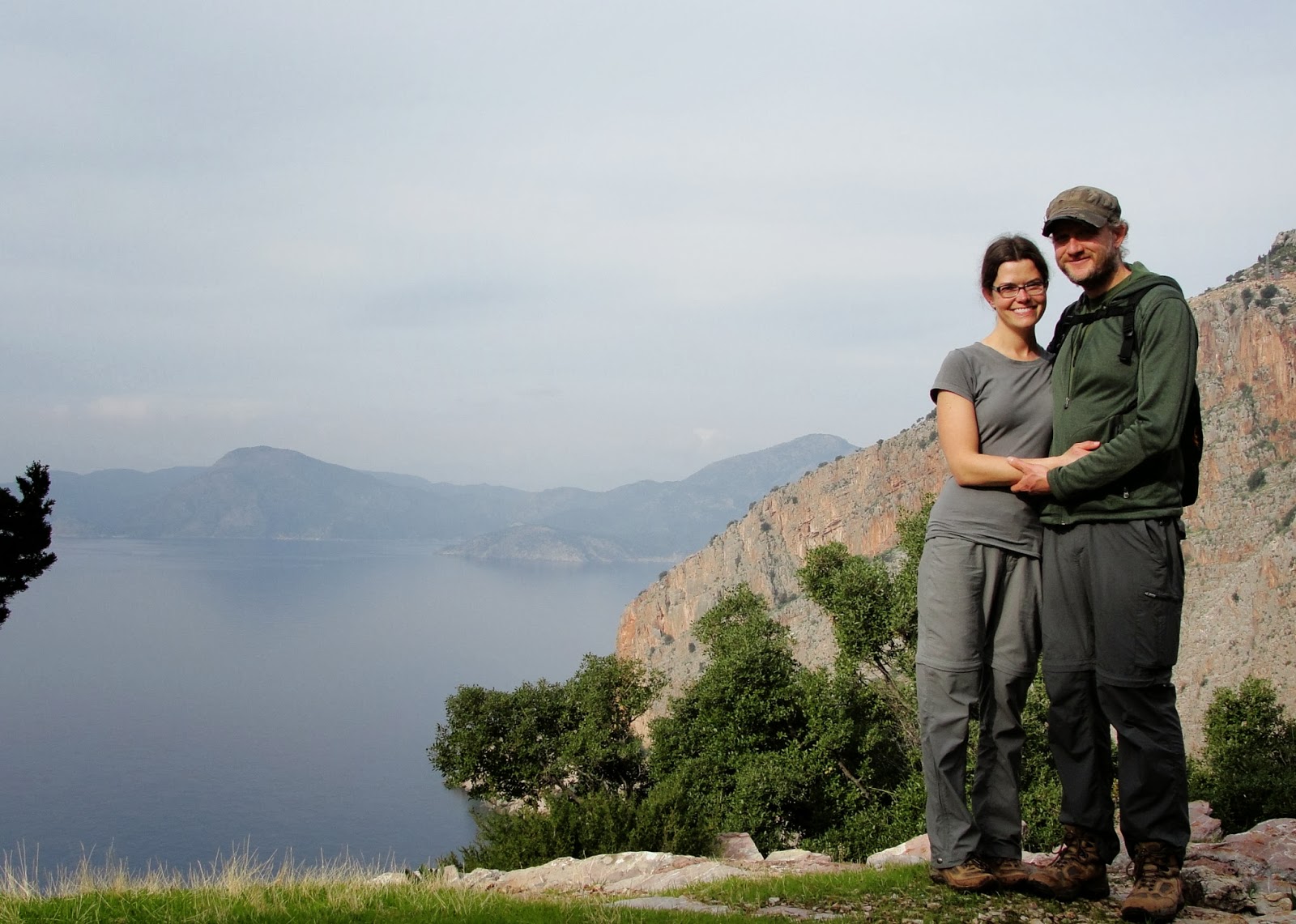 We ended up meandering down a forest trail toward the beach but because of a late start and an early last bus back to Fethiye, we didn't make it all the way to the coast. We did see the hippie camp in Butterfly Valley from above... and agreed that we'd made the right choice for our hike.


Fethye(sh) food notes - SO MUCH DELICIOUSNESS! 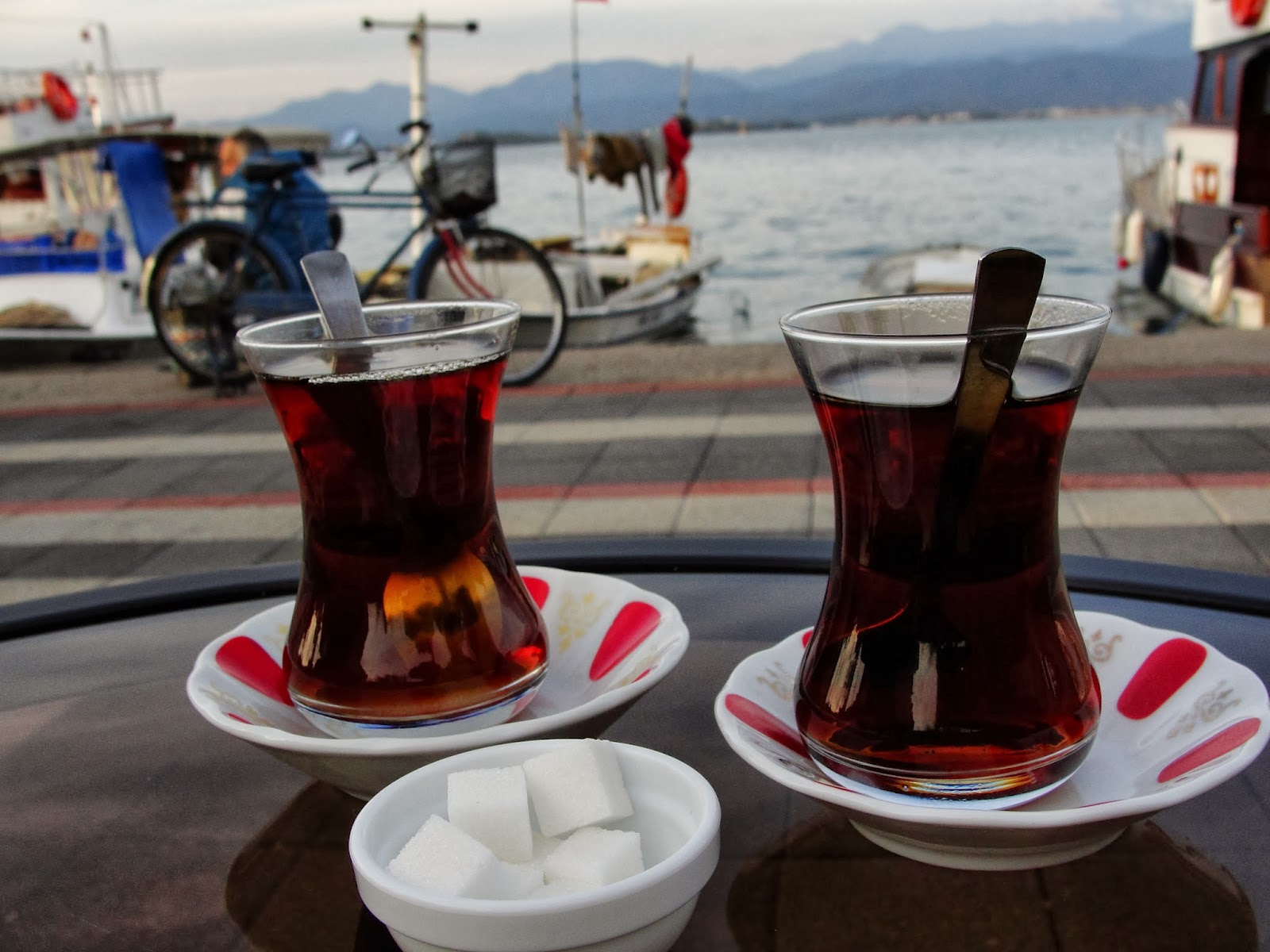 our "welcome to Fethiye" treat -
cay at the marina 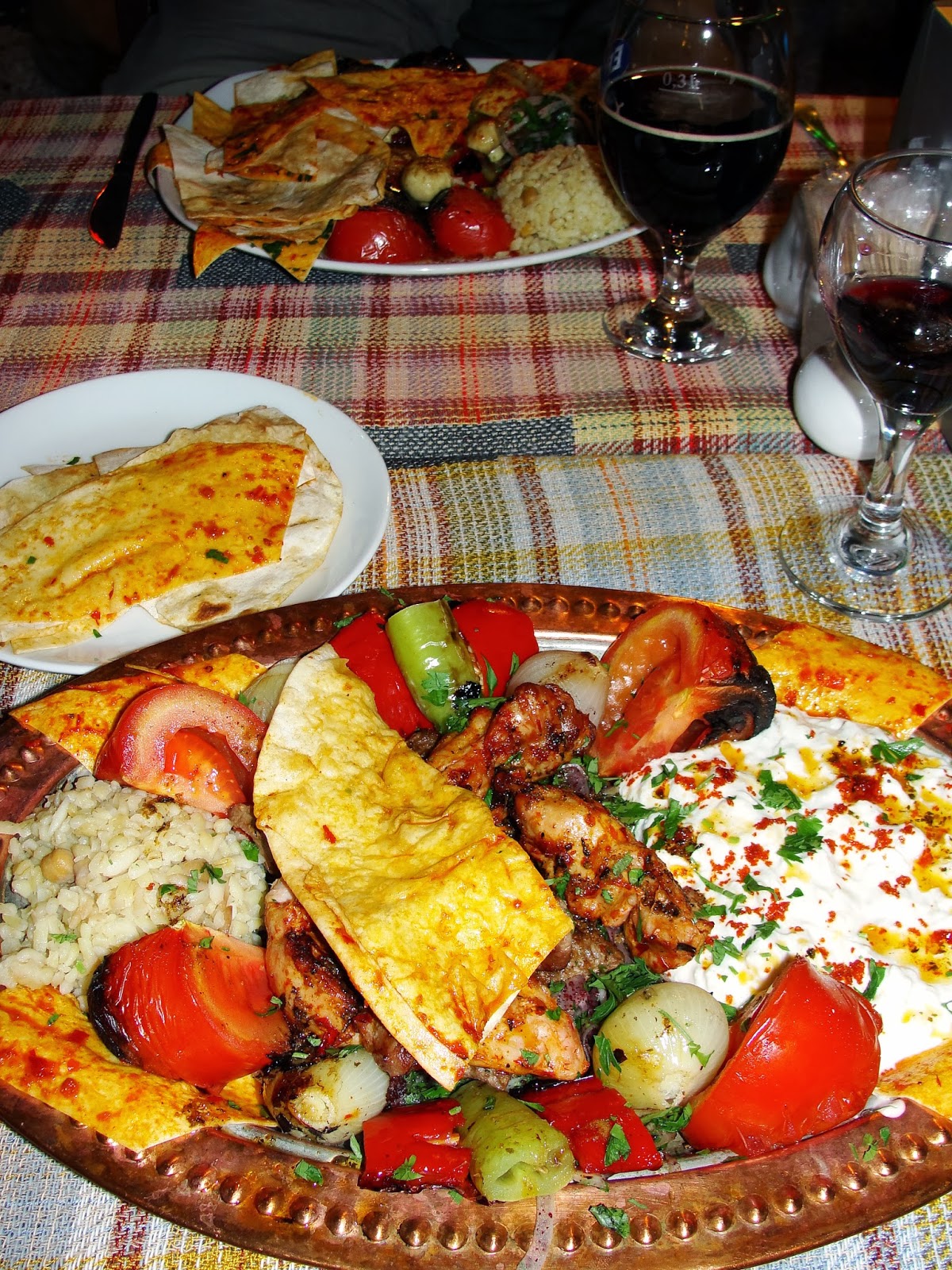 an amazing and colorful thanksgiving
dinner at Mozaic Bahce 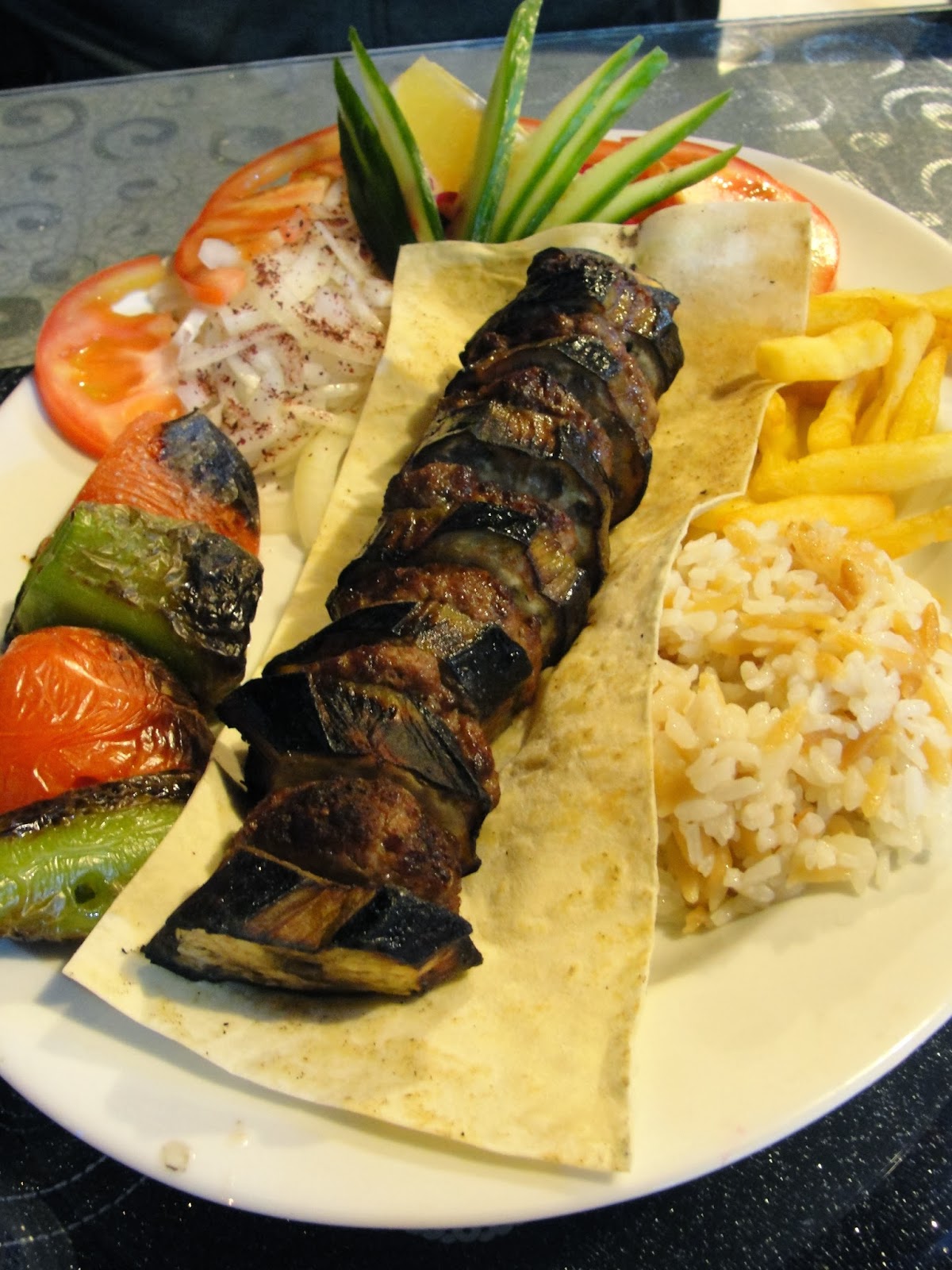 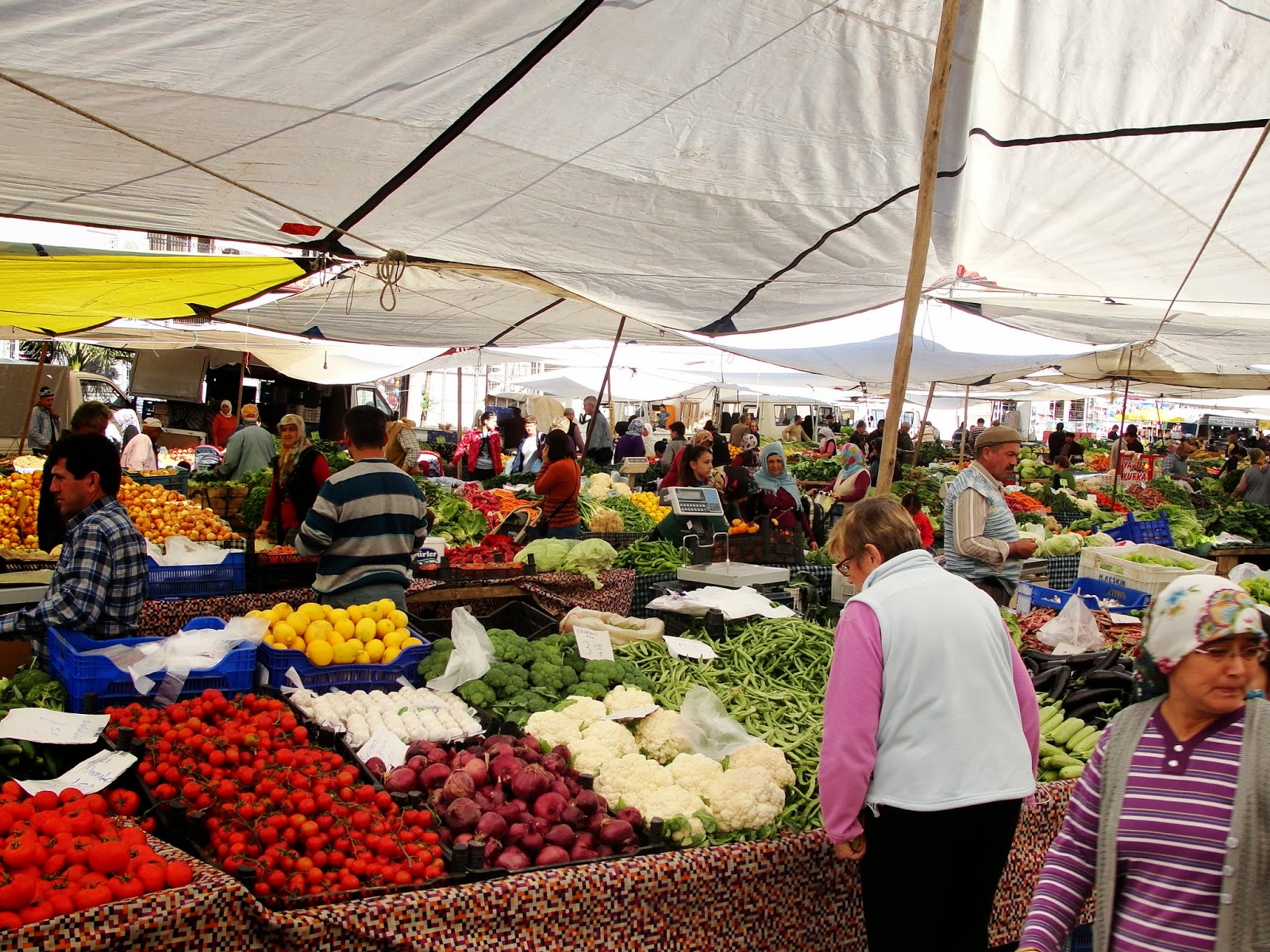 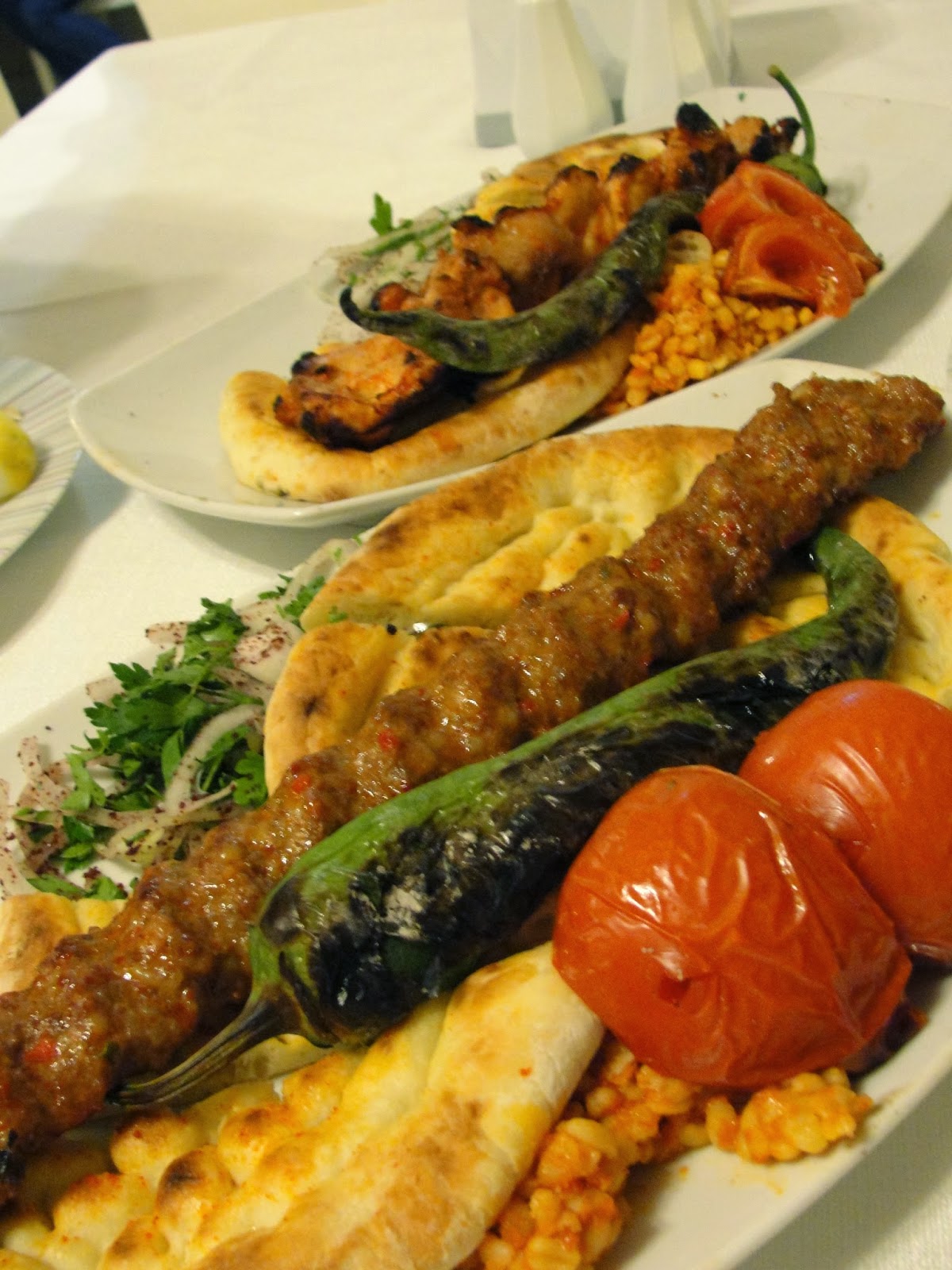 pide and kebaps at Paşa Kebap
(our least favorite meal, actually -
but even it was pretty good) 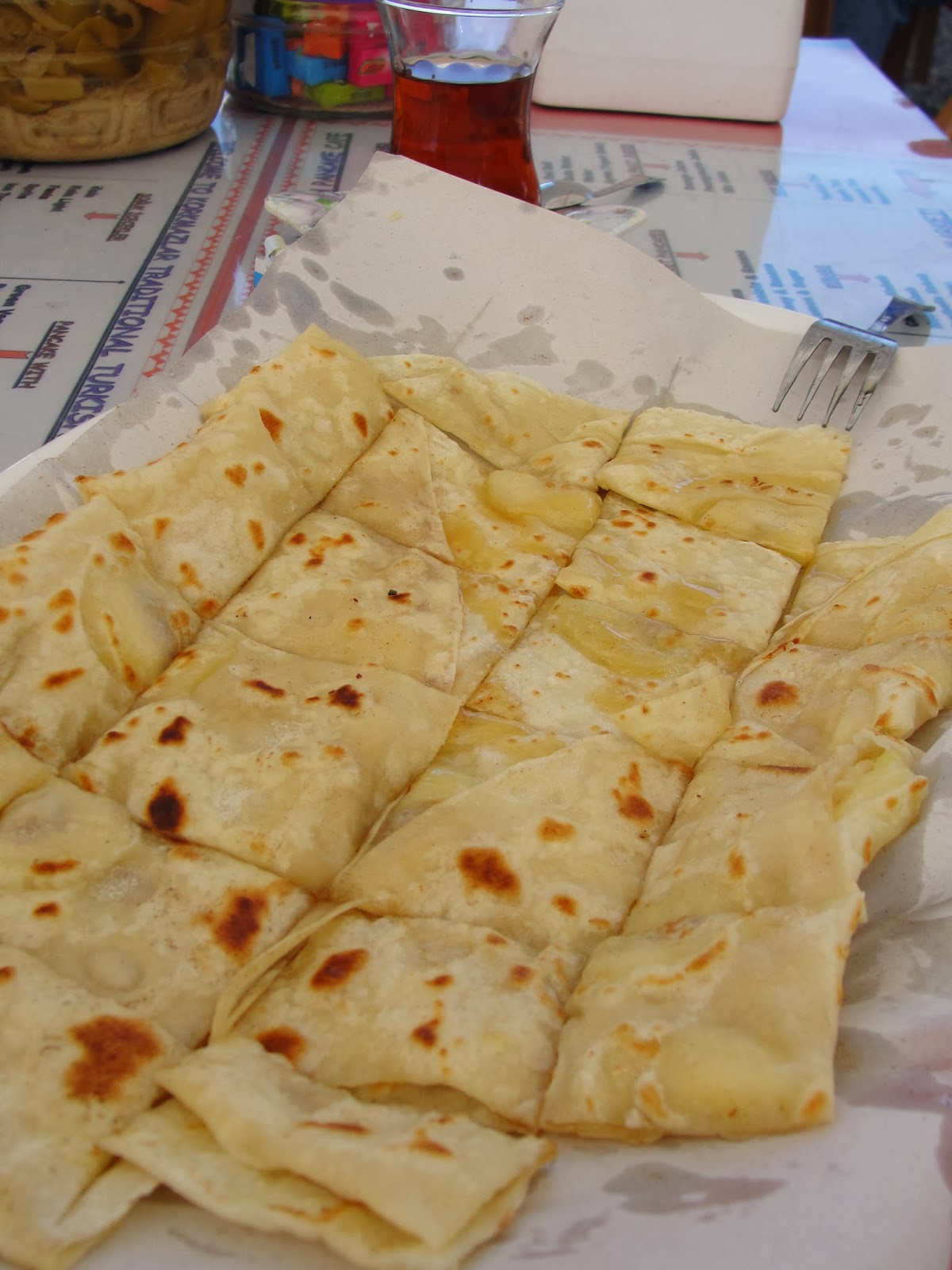 homemade pancakes at our
Üzümlü farmstay 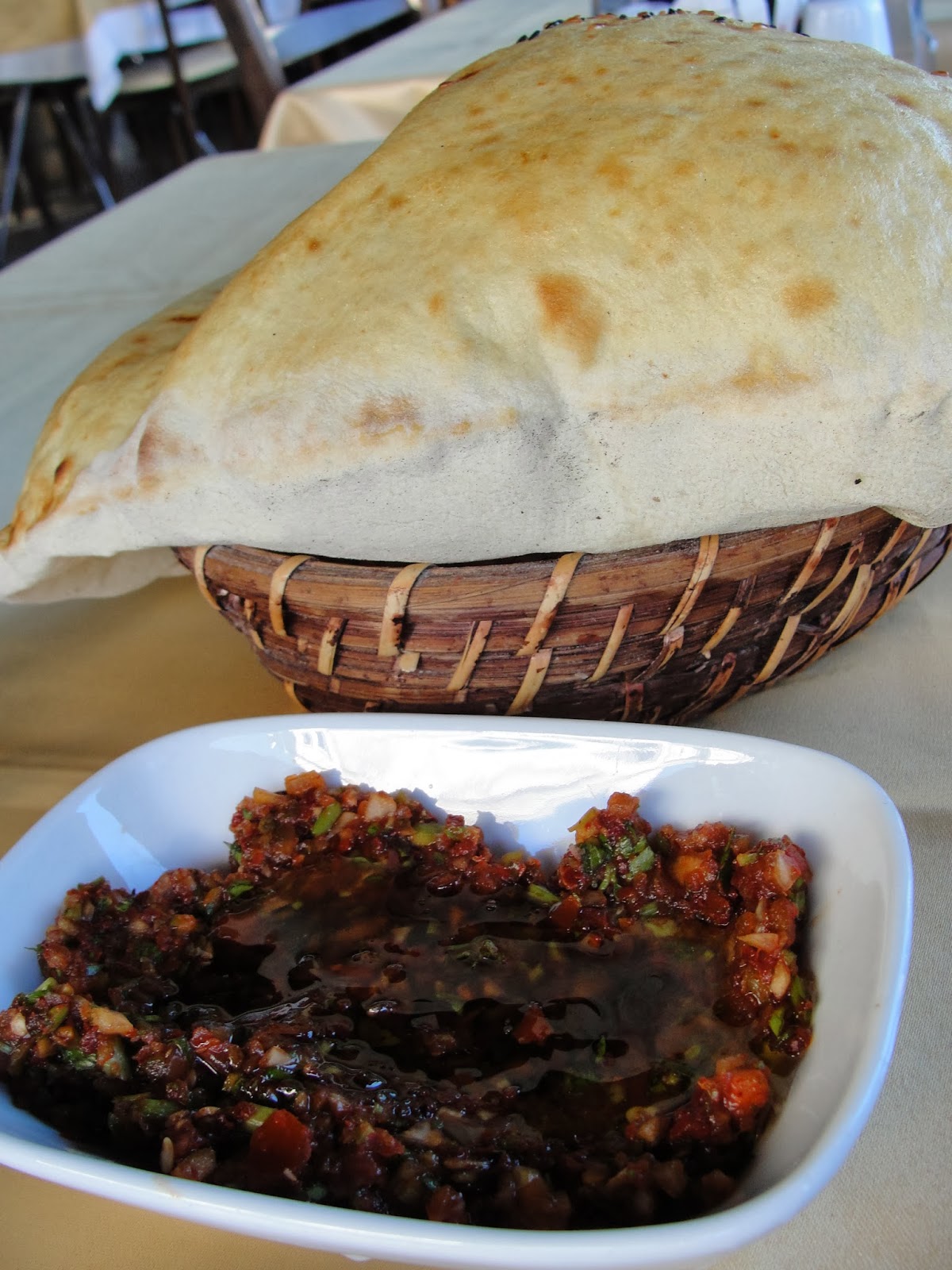 delicious meze before our main course
at Pasamzade 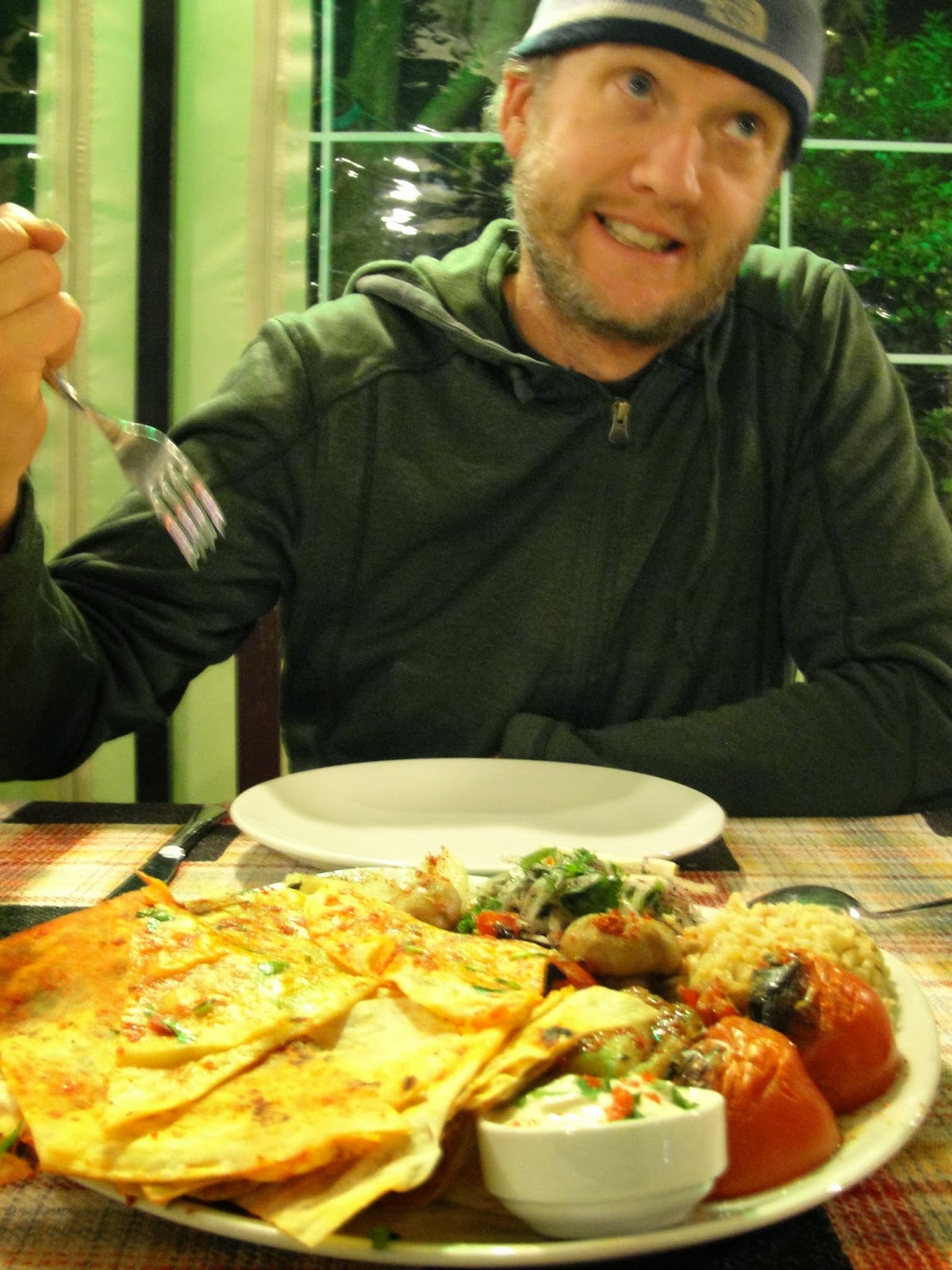 and back to Mozaic on our last night
("enough with the pictures -
CAN I JUST EAT ALREADY??") 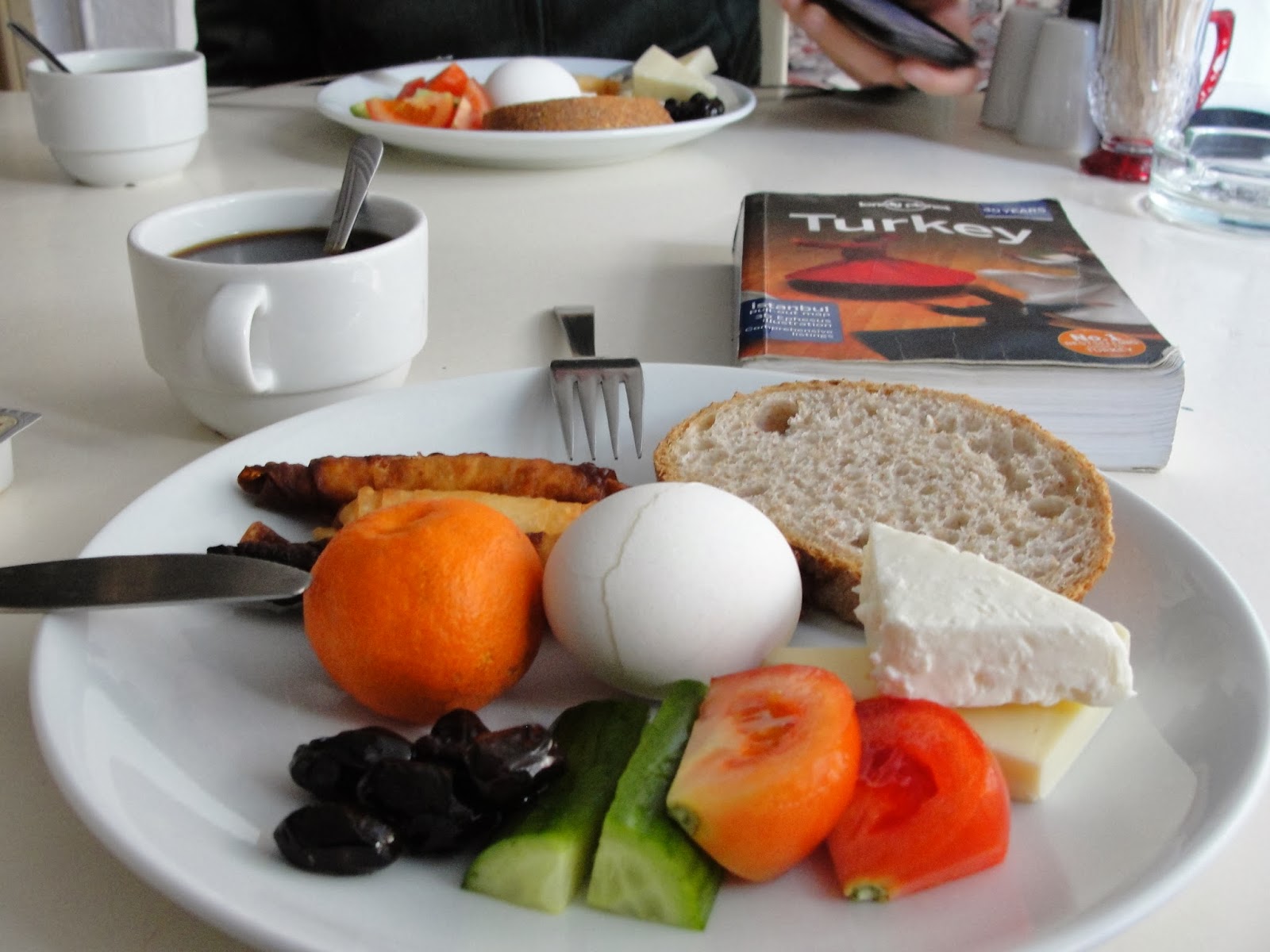 and the breakfast was lovely!

There was just too much to see and do... and EAT! But this is true for Turkey in general, actually. Really hoping to come back to this part of the world someday.  Before we leave, though, we've got more ruins to see!
Posted by Slowly Global
Email ThisBlogThis!Share to TwitterShare to FacebookShare to Pinterest
Labels: Friday five, turkey