I don't seem to get out of the backpack much these days. This is actually just fine with me - I've been traveling with Jen since 1994 and I've seen plenty, thank you very much. Besides, these Slowly Global people go to all kinds of weird hostels and take all kinds of ridiculous pictures. I'd rather just stay out of it. And then sometimes? They work on farms that don't even have cows! Can you imagine such a thing?

Anyway. I usually enjoy staying in but I was thrilled when they invited me along on their encierro tour in Pamplona! I had such a great time and I learned so much about this interesting tradition. Now, you might think it's odd that I, Clarence the Cow, was excited about this. I can't say that I necessarily support the sport of bullfighting, but it's part of the culture and barring a few exceptions I'm always game to learn more about things I don't necessarily agree with or understand. (Exceptions include golf, goose liver pate, soap operas.)

My memory ain't what it used to be - 20 in cow years is pretty much "dead" - so I took pictures of all the signs and copied everything here verbatim for your reading pleasure. This also explains typos or odd wording that got lost in the English translation. Well, most typos anyway... for some you'll have to pardon my fat hooves.

As a preview, the run itself is much shorter than I realized. And while I'd pictured Pamplona as a small village with dusty dirt roads, in actuality the cobbled streets where the run occurs are lined with tapas bars, and dozens of high end shops are really close by. Thanks, Mr. Hemmingway! 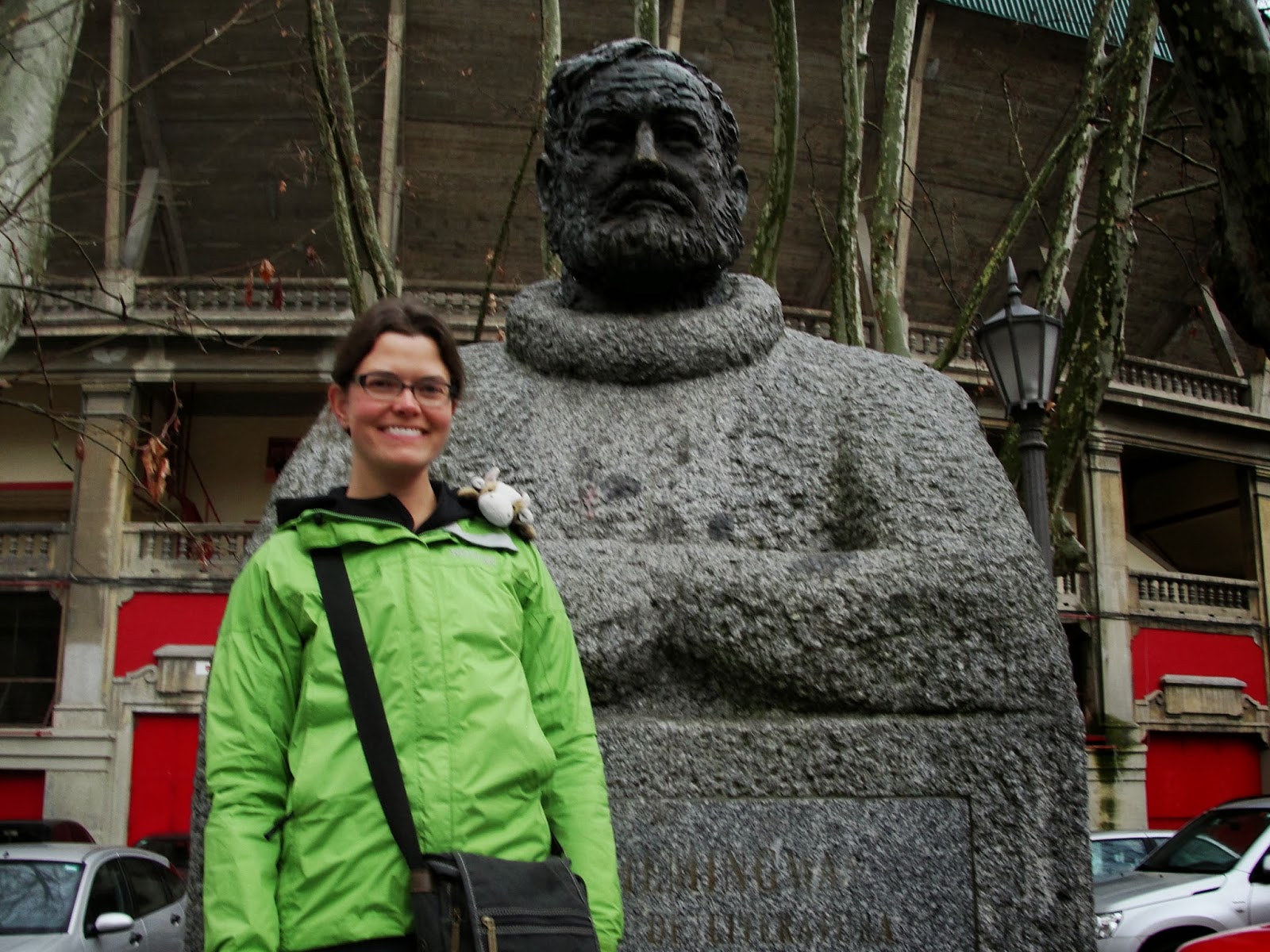 he made Pamplona famous
when he wrote The Sun Also Rises

Okay, let's get this bull run show on the road. Be sure to read about the Casa de Misericordia at the end. I had no idea this was such a philanthropic tradition. 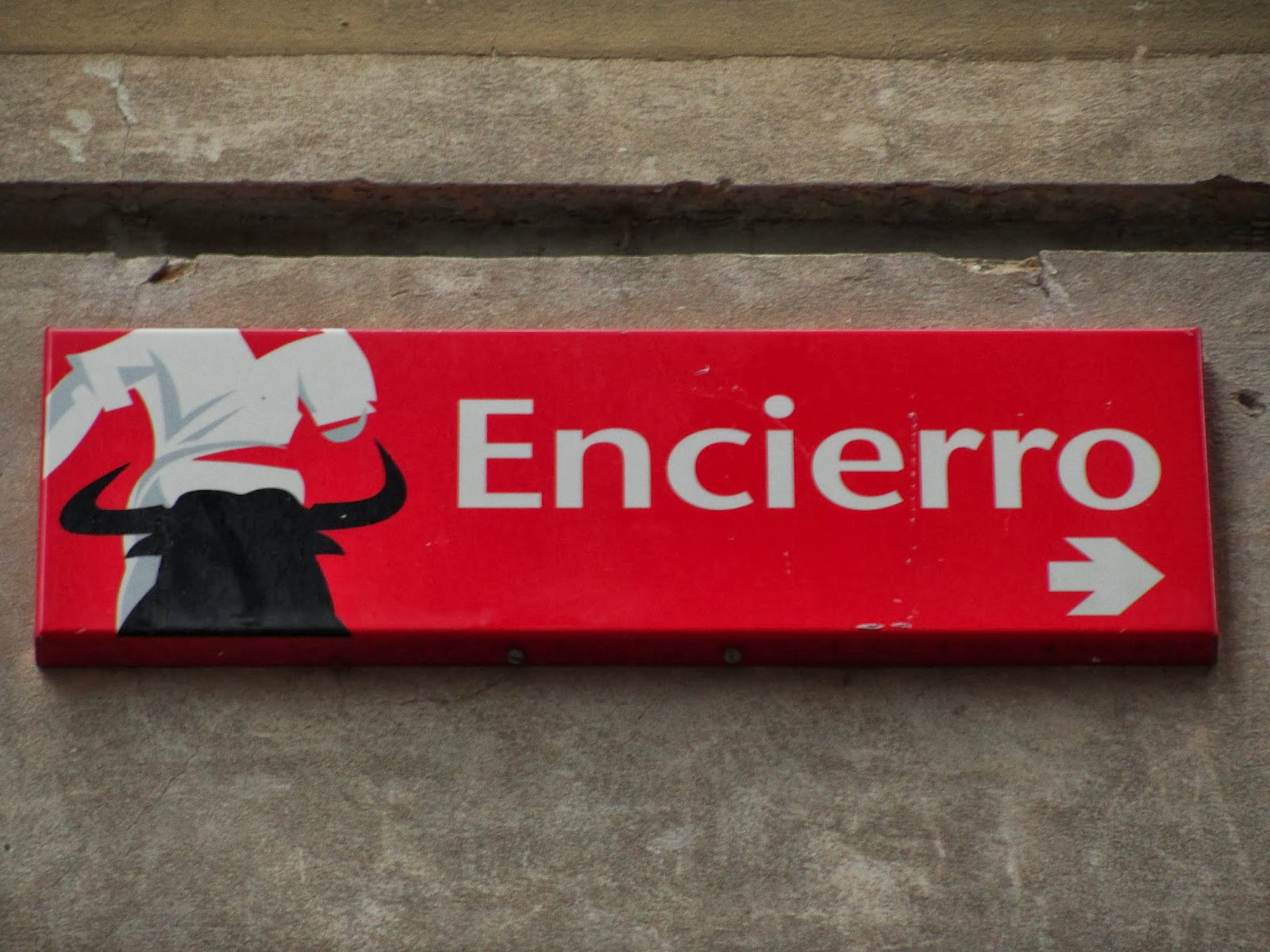 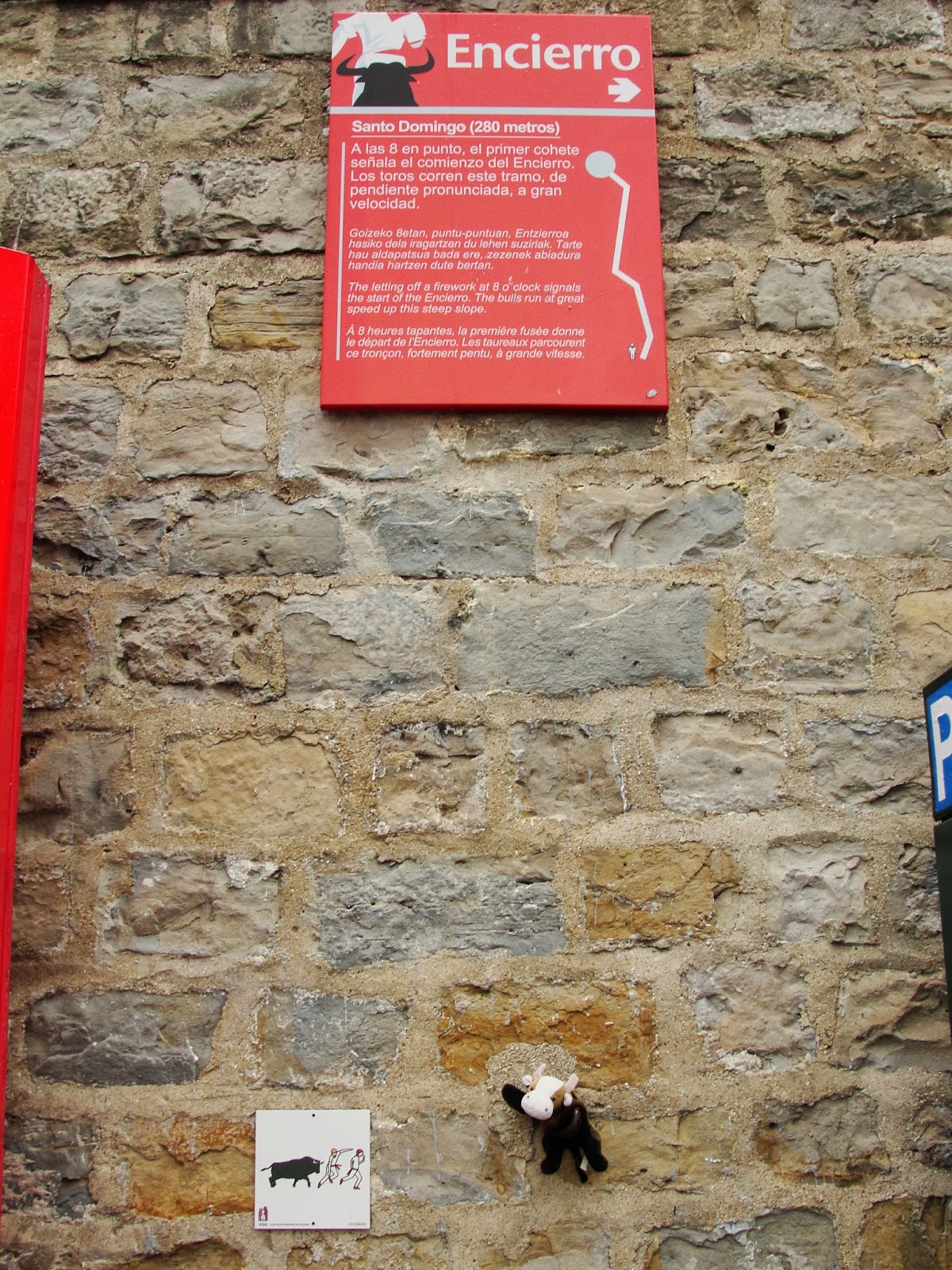 let's begin at the beginning

The origin of the Bull Run goes back to medieval times. The bulls for the bullfight used to be driven through the streets at dawn from outside the city walls to the public square that served as a bull ring. Many young men from Pamplona became accustomed to running in front of the bulls, a practice that was repeatedly banned by the authorities but continued to attract large numbers of followers, until finally it ended up turning into a long-standing tradition. The Bull Run is now the main event of the Sanfermines. It is held from 7th Juli to 14th Juli every morning at 8am.

The letting off a firework at 8 o'clock signals the start of the Encierro. The bulls run at great speed up this steep slope. 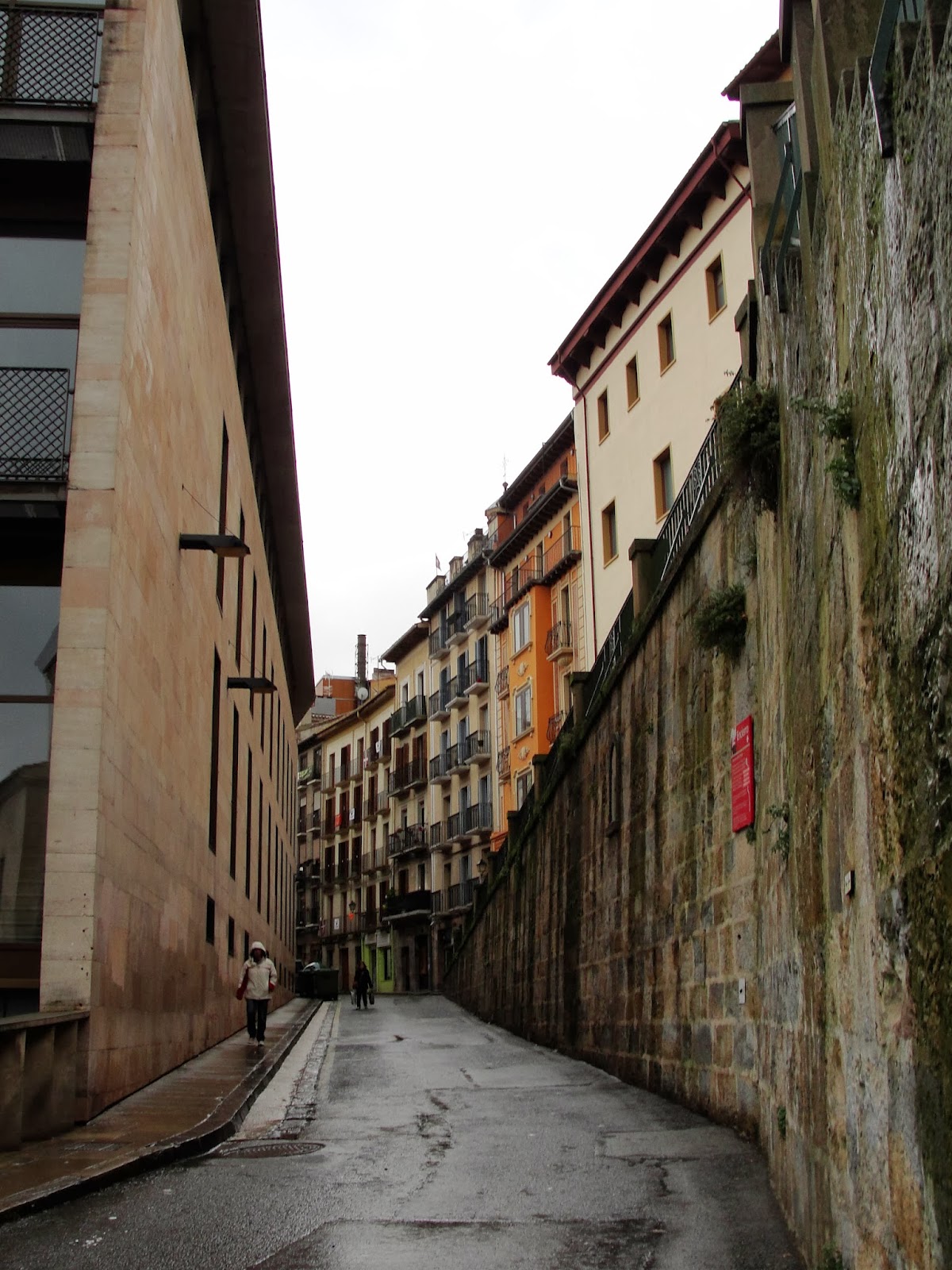 not too steep... unless you're a bull

Moments before the start, the runners sing to San Fermin three times to ask for his blessing and protection. 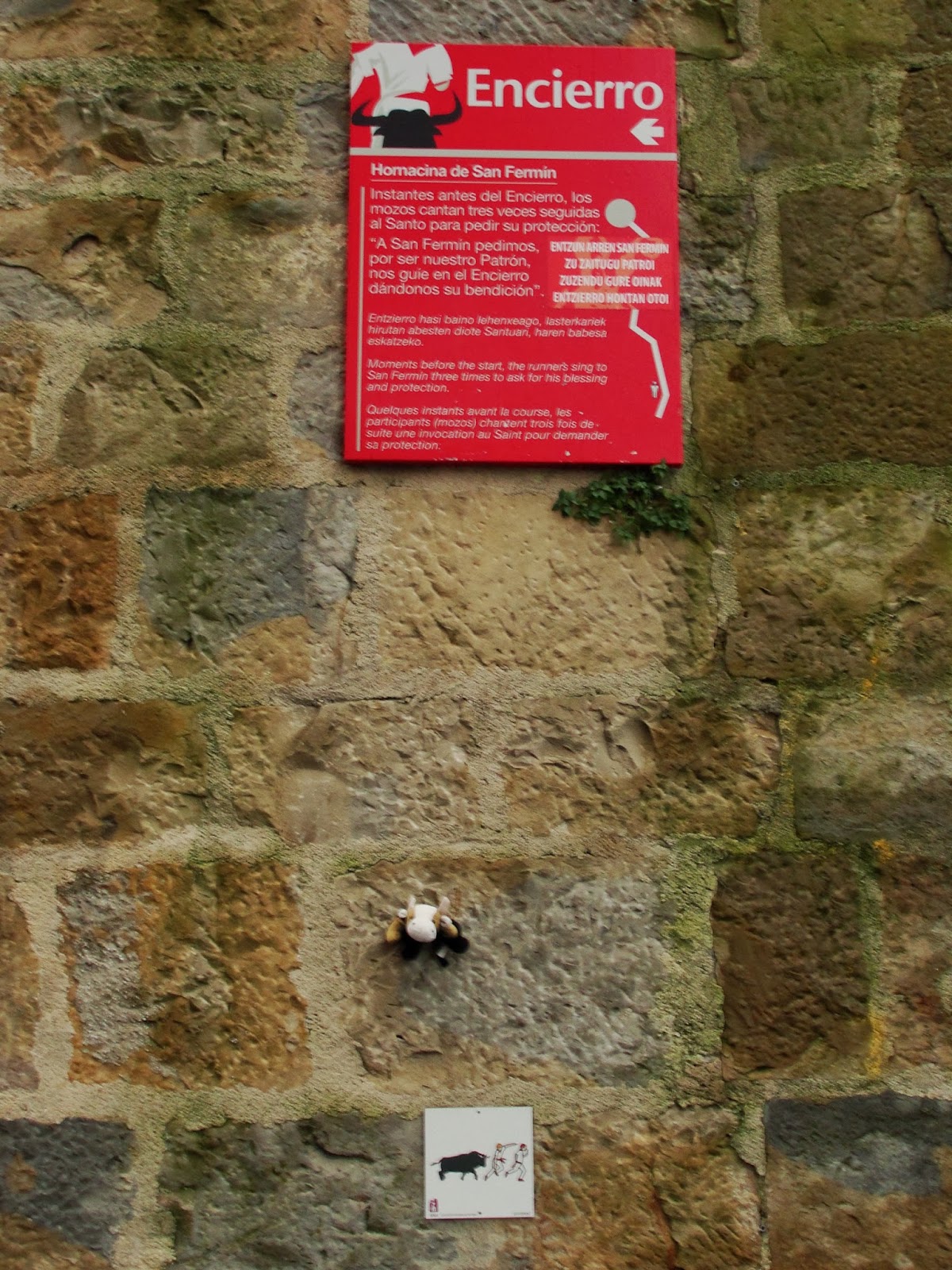 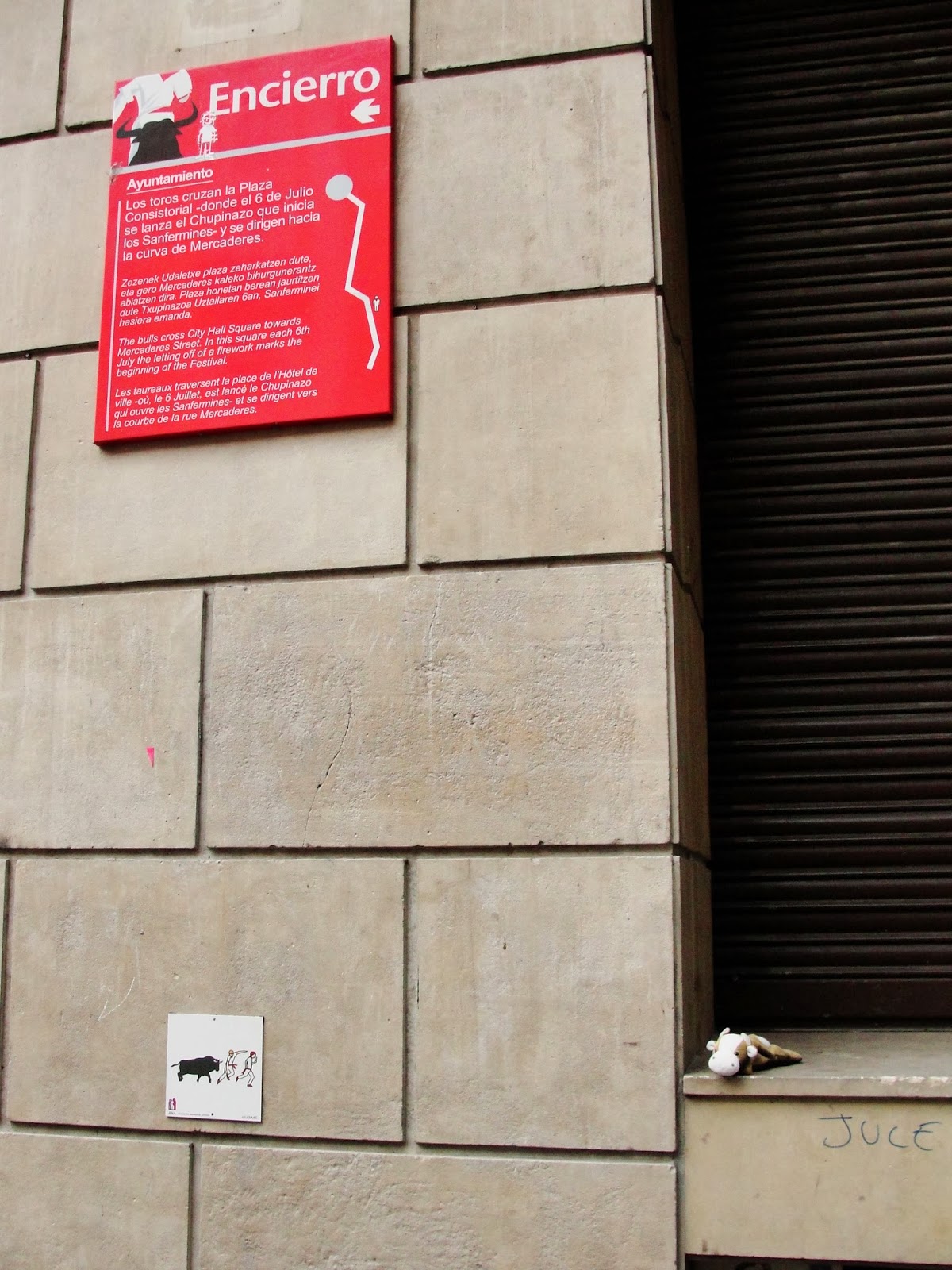 while the bulls continue running

The bulls cross City Hall Square towards Mercanderes Street. In this square each 6th July the letting off of a firework marks the beginning of the Festival. 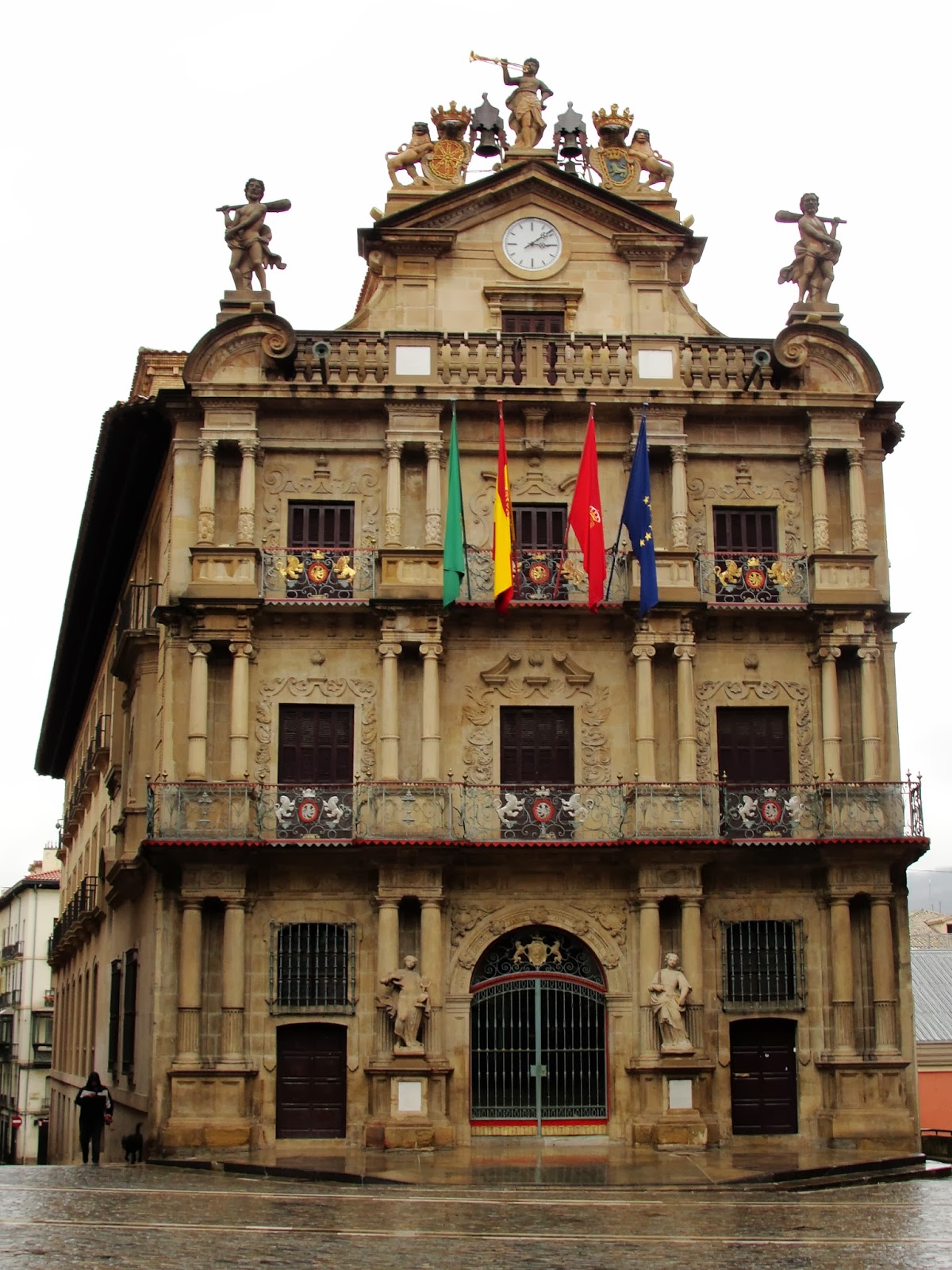 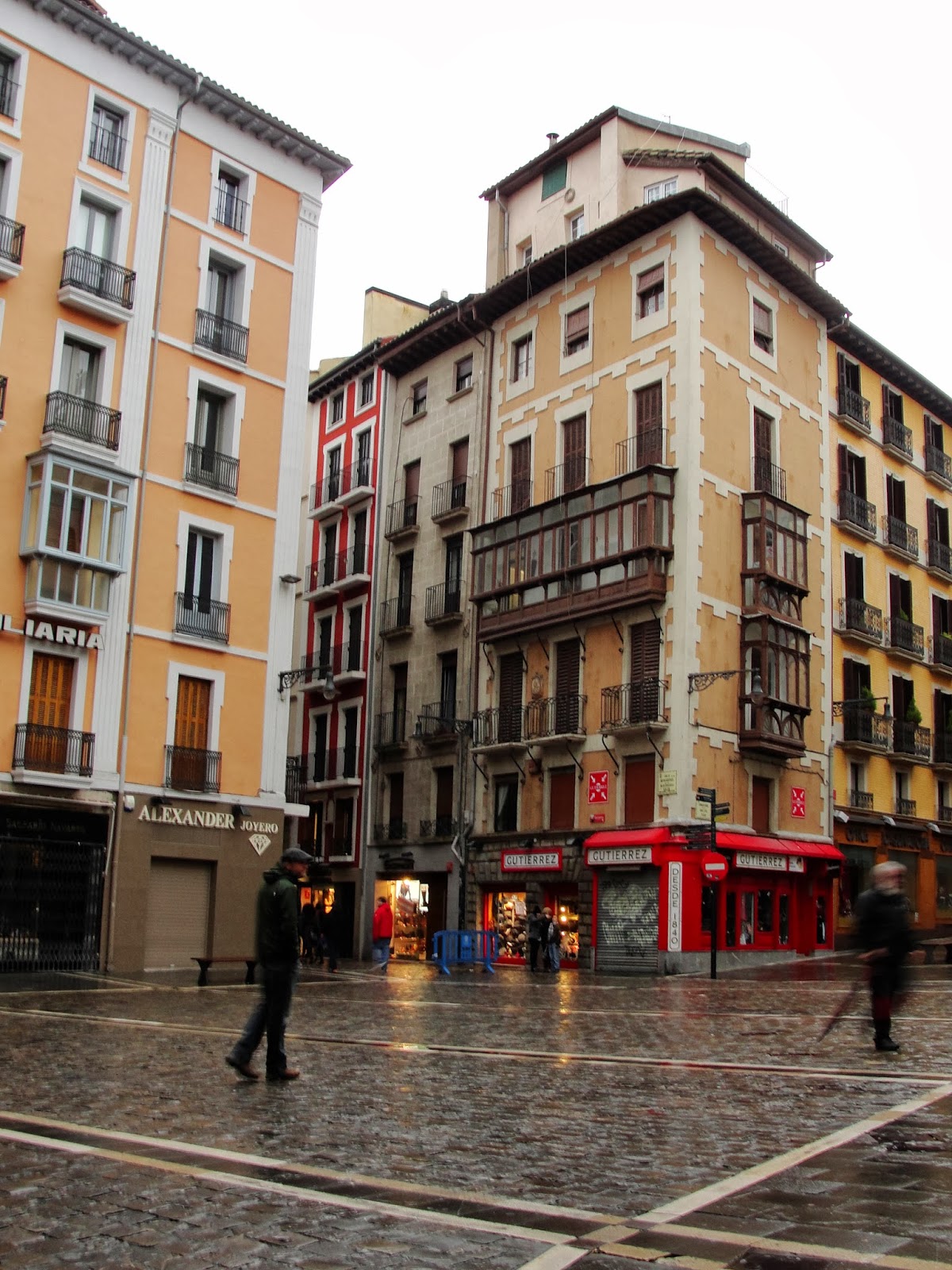 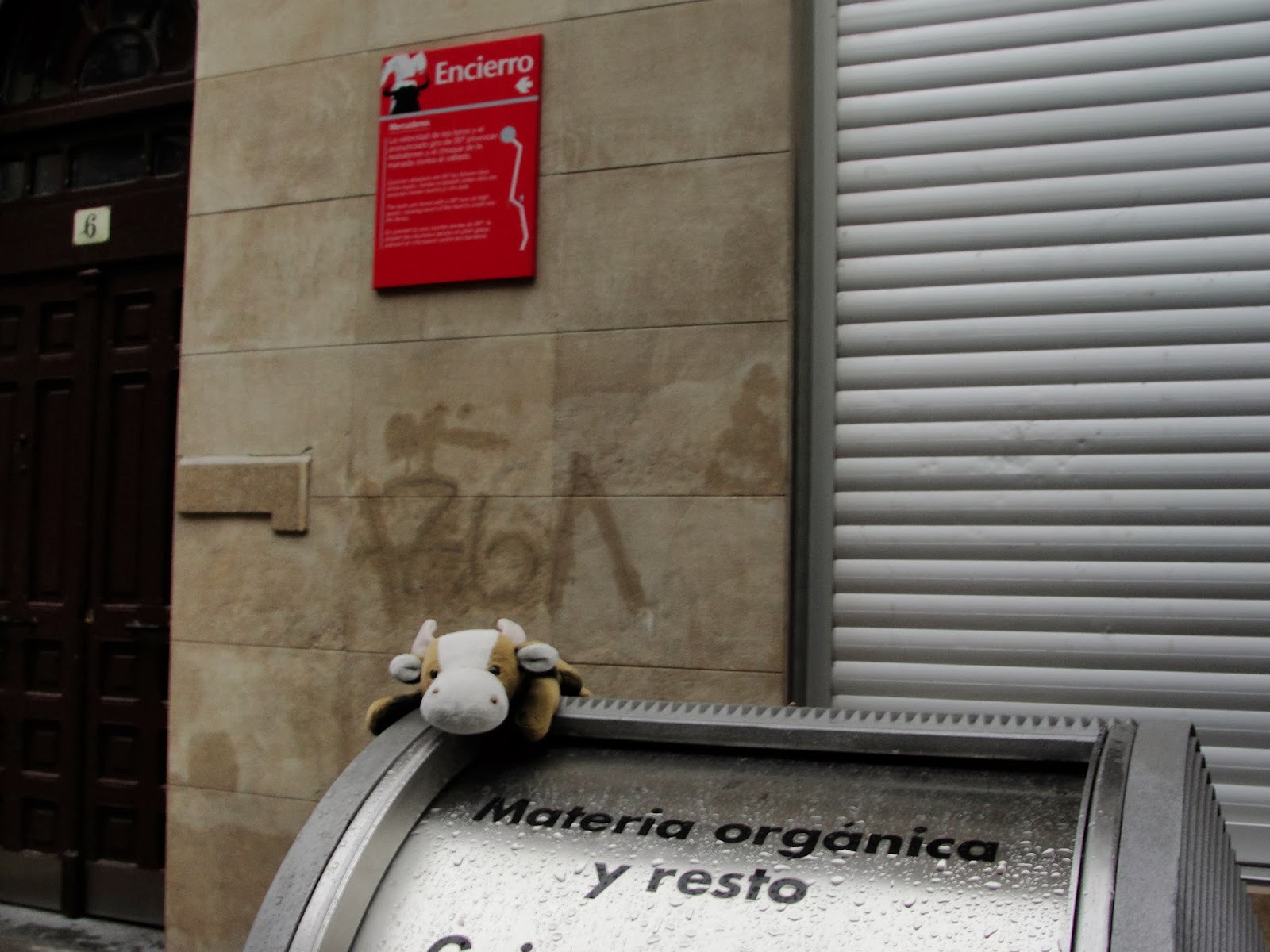 and as an aside, Pamplona's trash cans are amazing!

The bulls are faced with a 90 degree turn at high speed, causing much of the herd to crash into the fence. 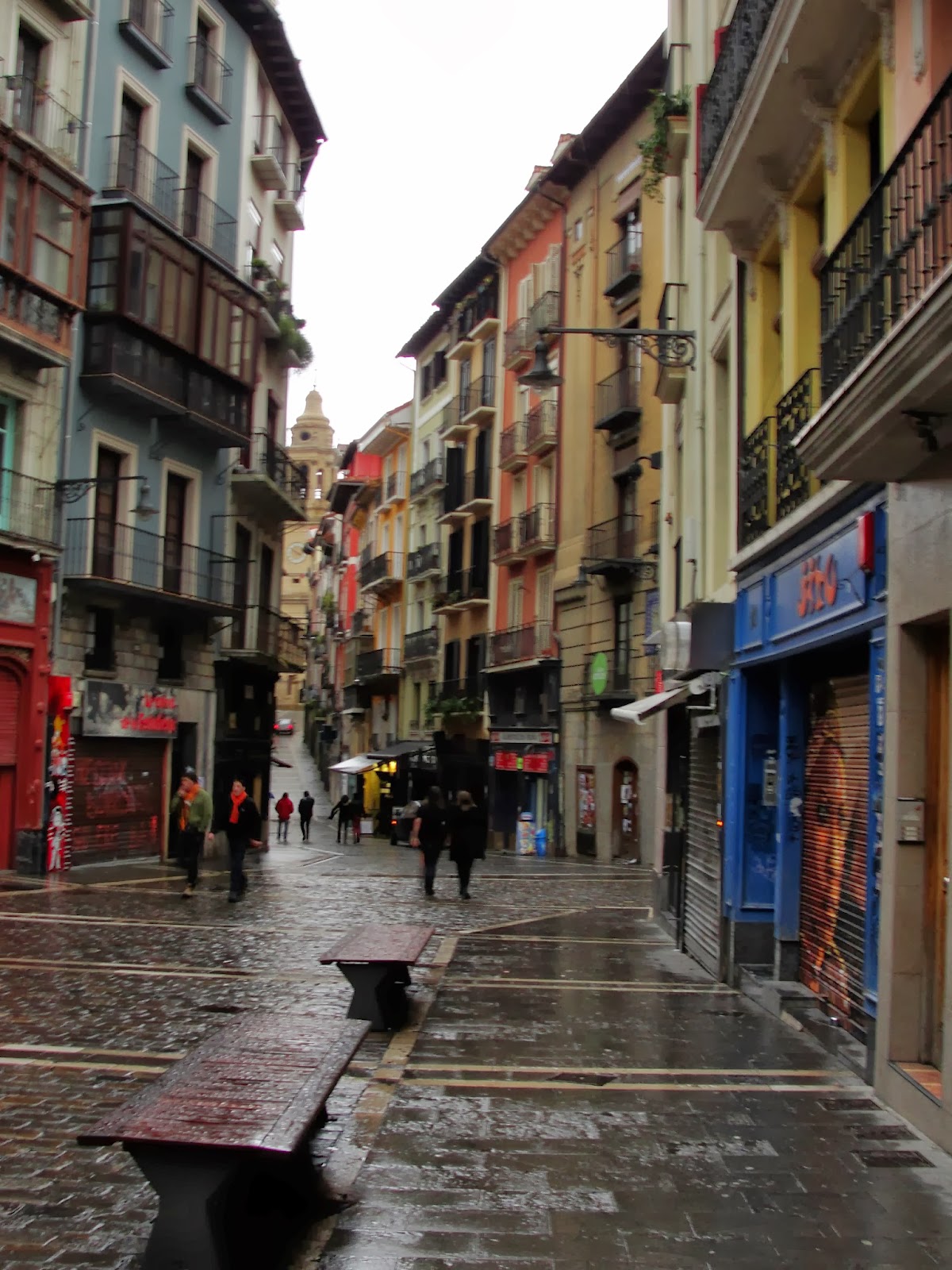 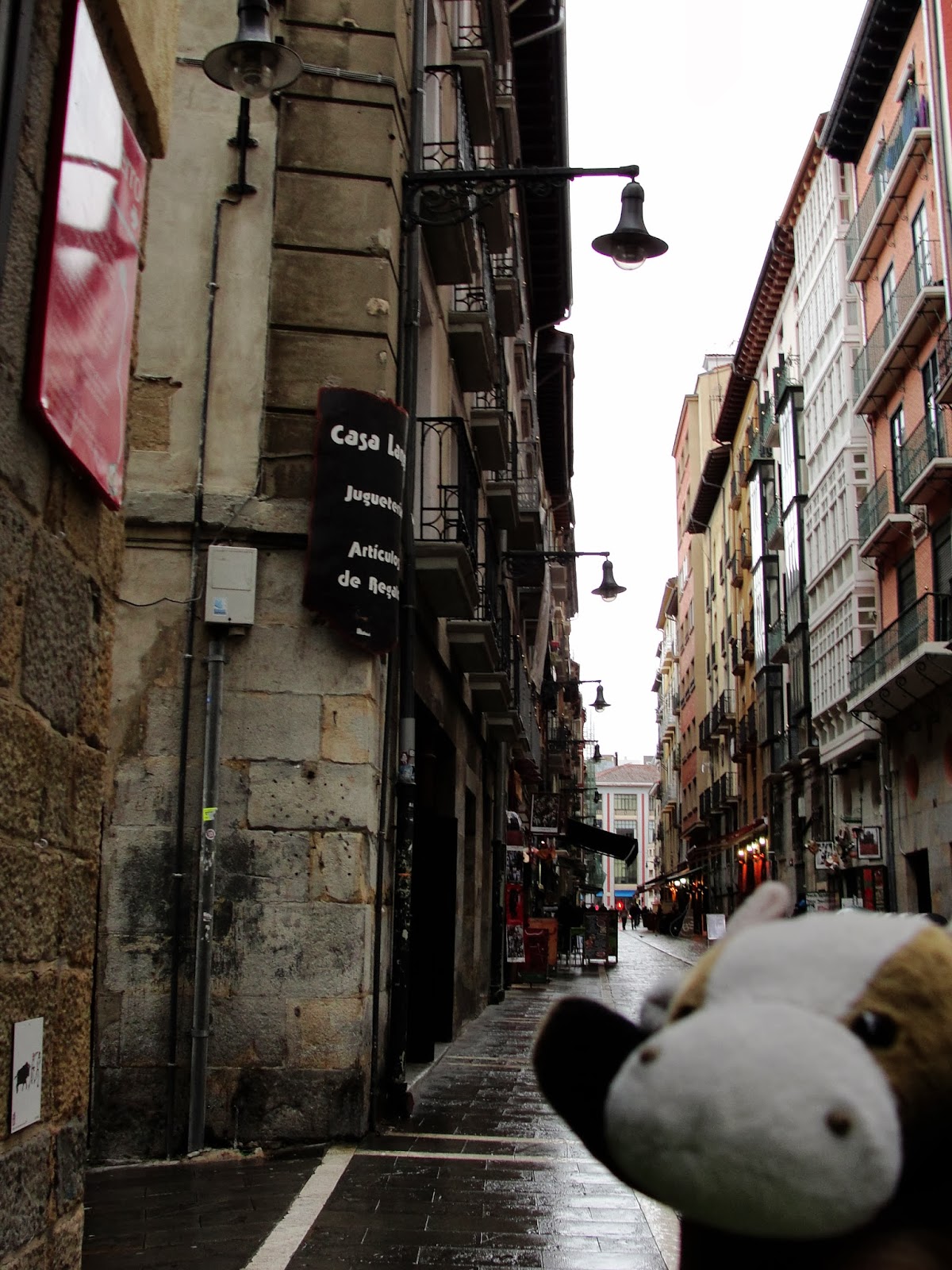 enter runners
(not pictured... you guessed it)

In this popular street the runners get involved in spectacular races. The bulls tend to run more slowly in this, the longest and straightest stretch of the run. 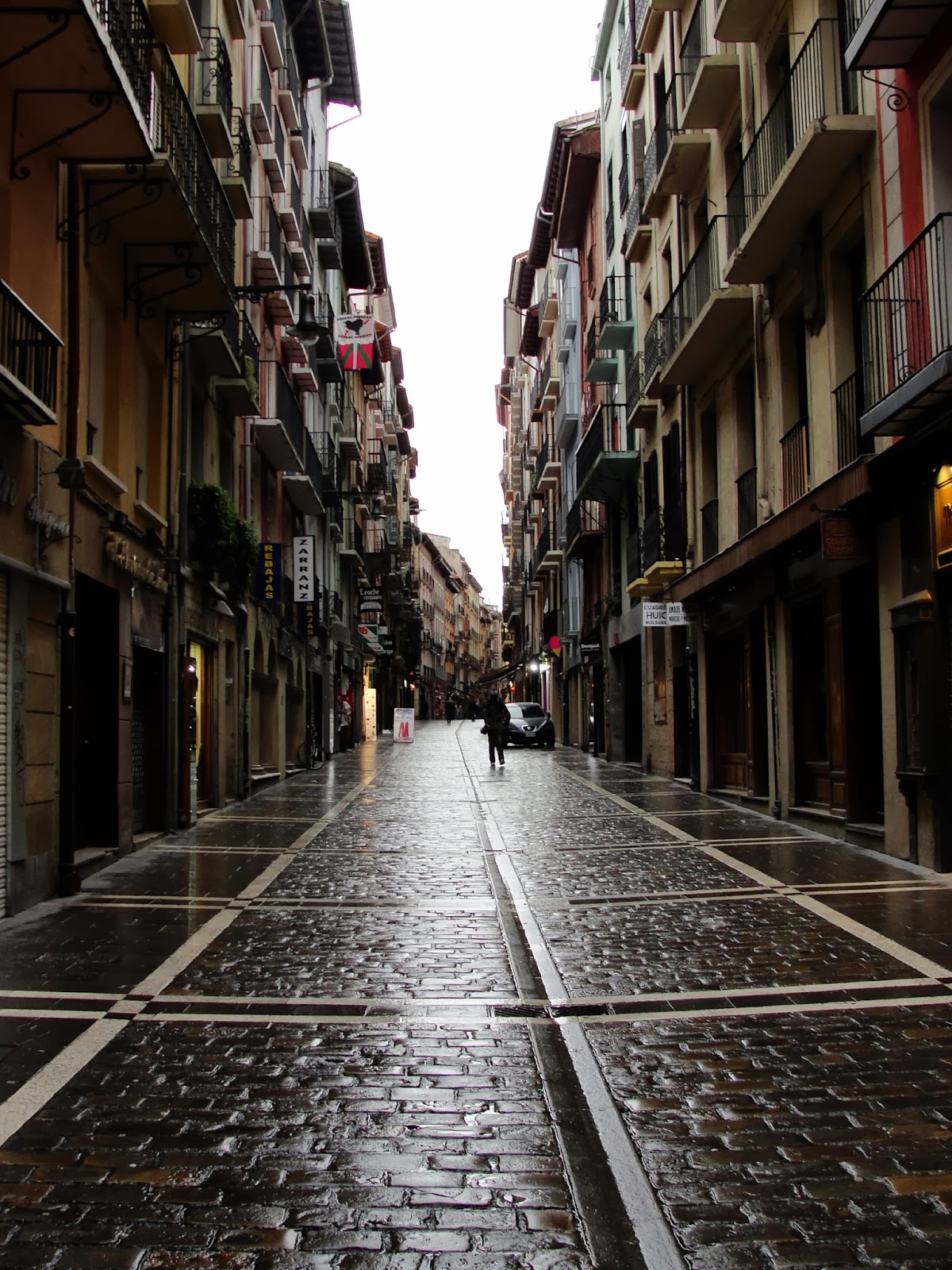 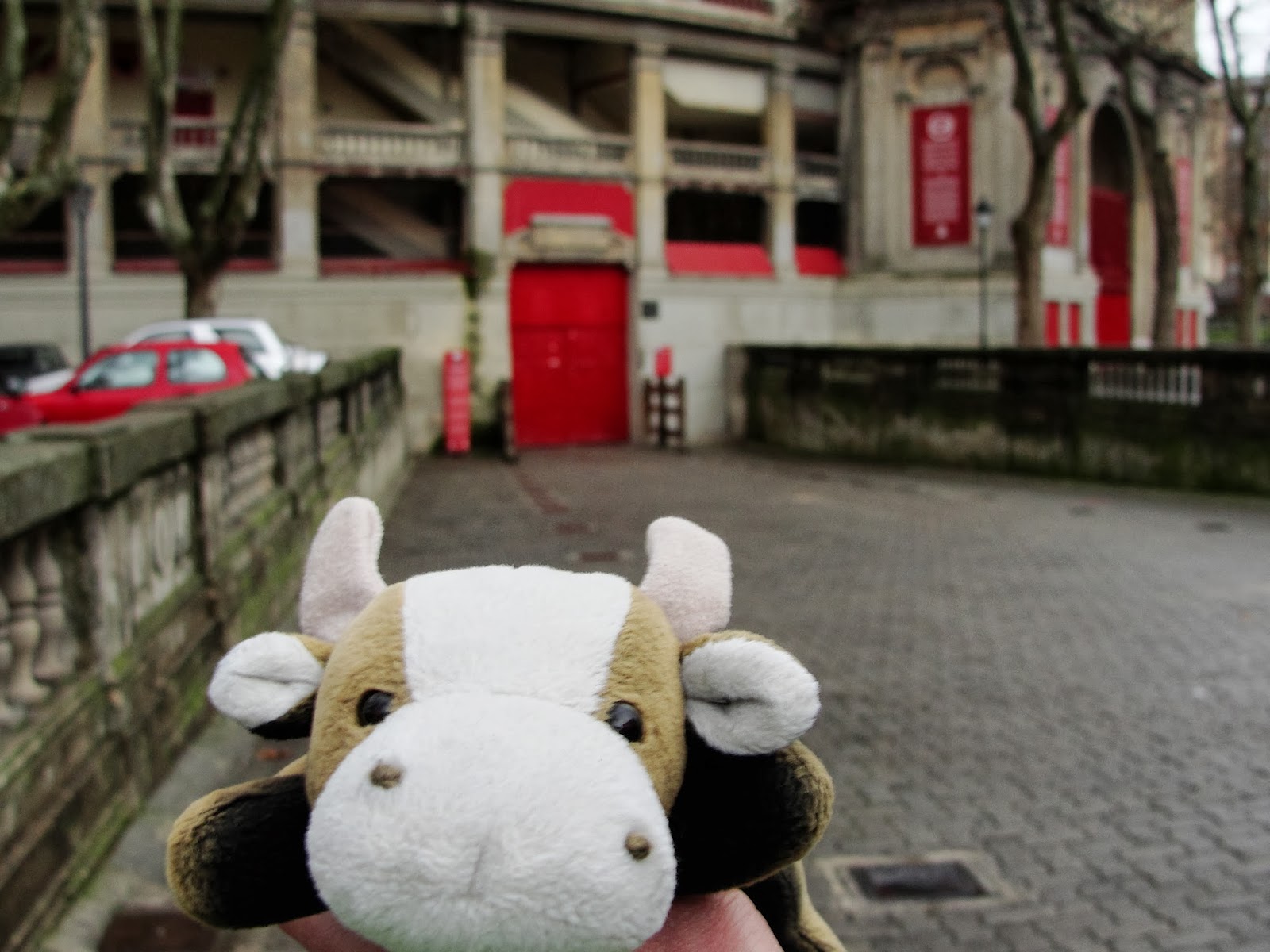 The run finishes in the bullring where the cow hands take the bulls to the enclosure, ready for the bullfight in the afternoon. 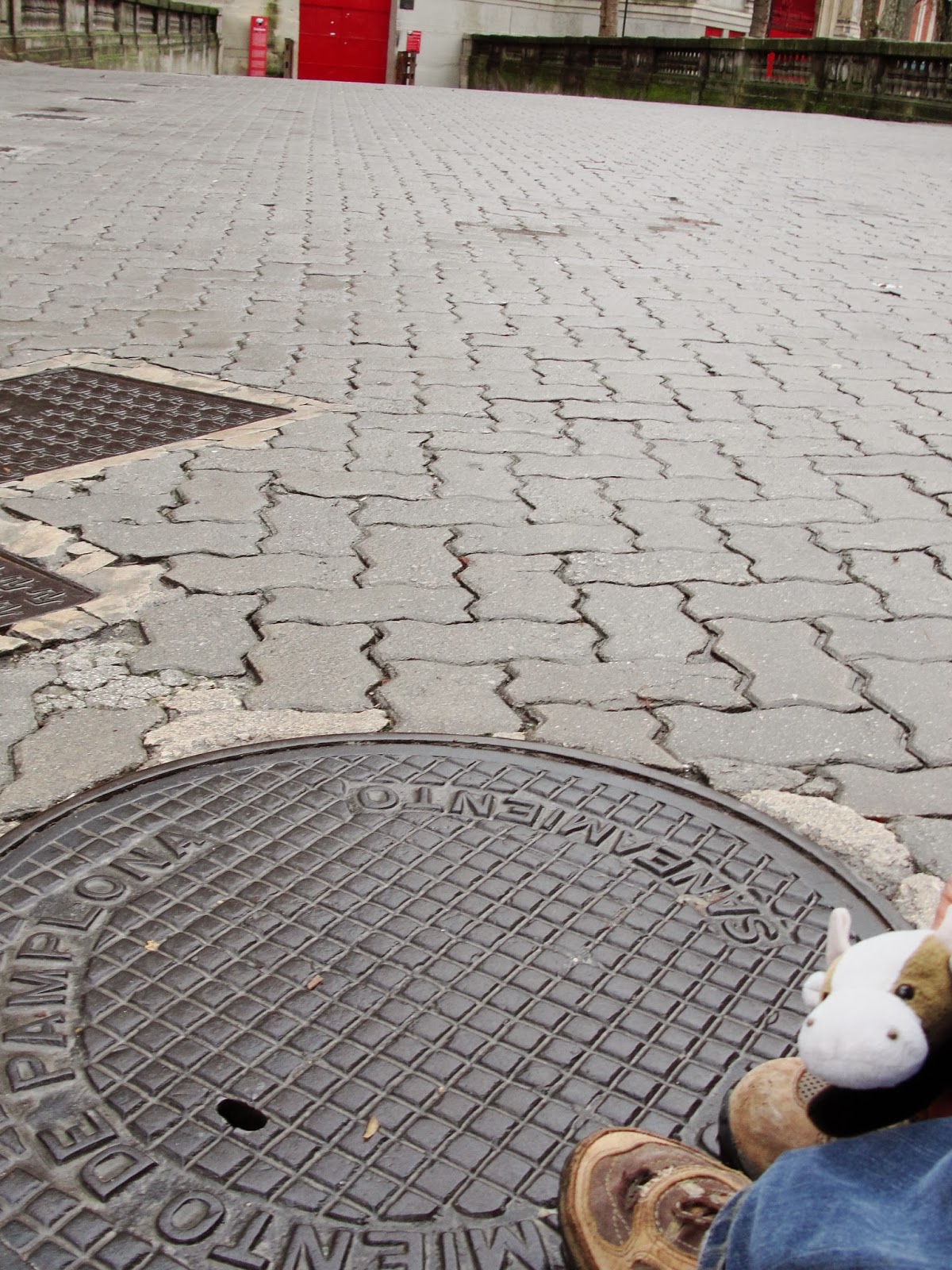 where only the strong survive

The Pamplona Bullring, which belongs exclusively to the Casa er Misericordia, is one of the most representative buildings of the Navarra capital and, along with the traditional bull run, is one of the vital elements of the San Fermin festivities.

The Casa de Misericordia organises the bull runs and all events related to the bullfighting spectacle held during the San Fermin festivals, hiring bulls and bullfighters, setting up the Corralillos del Gas bullpens, organising the mini bull runs and main bull runs, the assembly and placement if the fences and the hiring of herders, dobladores (herders in the ring), mules, music bands, medical team and the 300 people in the bullring staff. 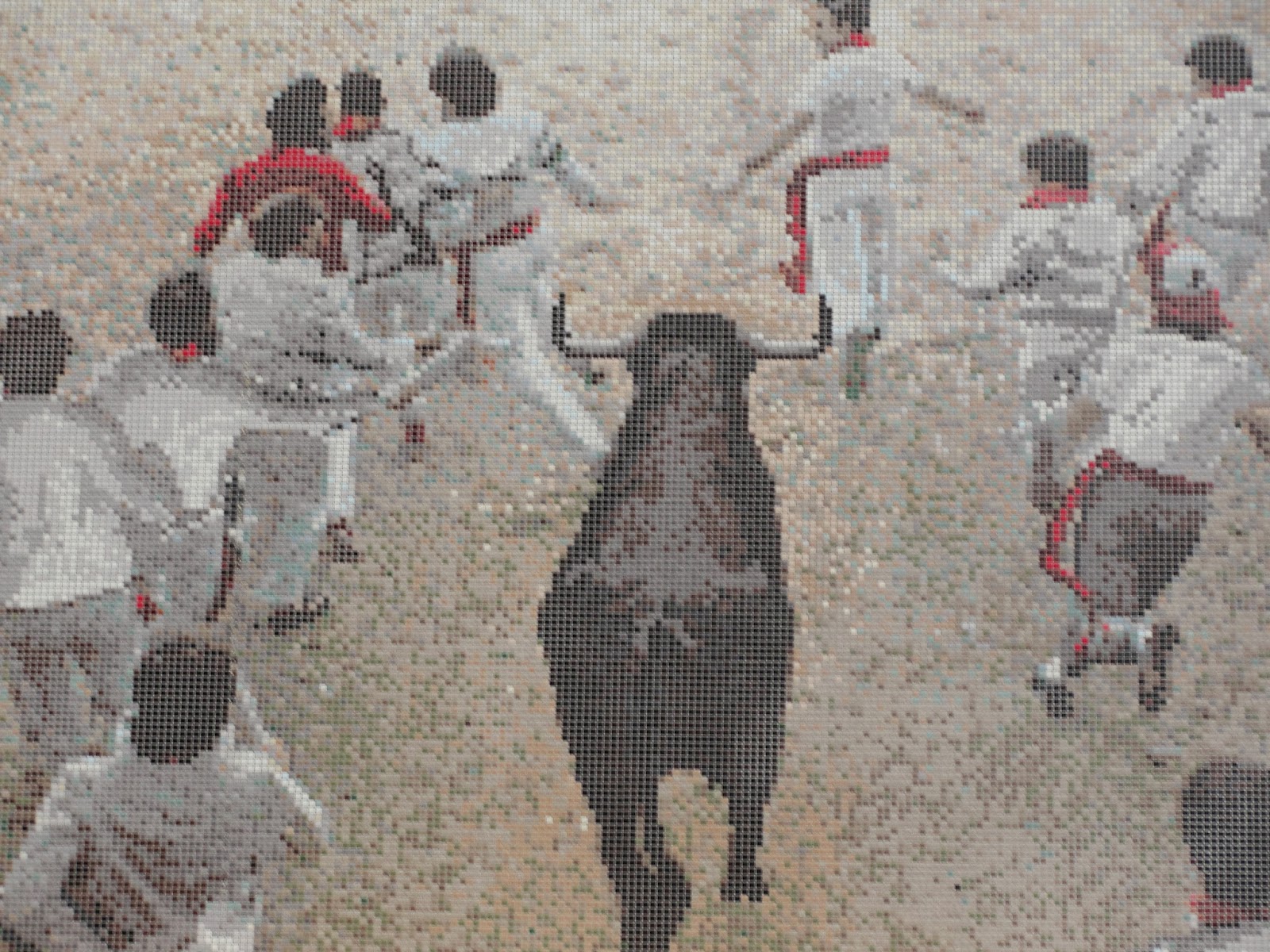 The Casa de Misericordia became the developer and owner of the Bullring in 1920, by means of a bond issue and with the help of local financial institutions. It is the oldest bullring in Spain made from reinforced concrete.

The building of this edifice, which was designed by Francisco Urcola, began in March 1921 and the Bullring was officially opened on 7 July 1922. Around the central ring, which measures 52 metres in diameter, a series of sections, stands and upper tiers with large boxes were built. At that time, the Bullring had a seating capacity of 12,200.

As a result of increased demand for seats among both the local citizens and tourists, in 1966, the Navarran architect Rafael Moneo extended the structure to seat 19,700 people. It is currently the third largest bullring in the world, after the ones in Mexico City and Madrid. 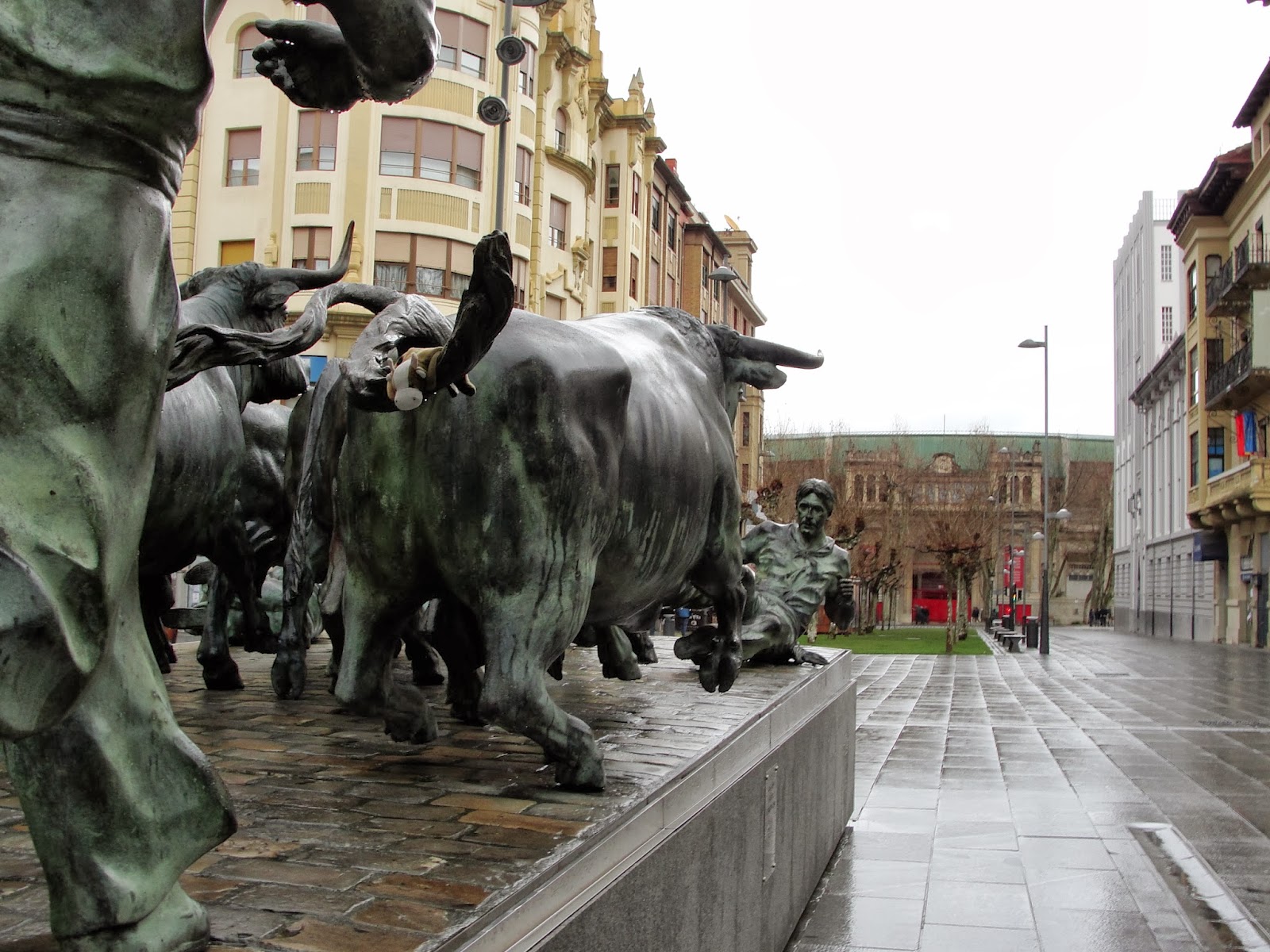 the bullring looming at the sidewalk's end

The Casa de Misericordia would like to highlight the importance of the organisation of the San Fernin festivals as a source of income and development for this charitable institution, which currently houses 550 residents with a mean age of 85.

Between 2004 and 2005, the bullring was adapted to comply with current safety regulations. As a result of this, a fountain and channel were found under the main ring, which provided water to the old fortified town up until 1852. A small bridge was also discovered, along with the remains of the Tejeria Ravelin which once formed part of the old city walls.

For over 300 years now, as an independent and civil foundation, the Casa de Misericordia in Pamplona has been a shining example to the city as regards caring for the most underprivileged members of our society. Today, this institution, which was founded in 1706, remains faithful to its original principals of charity and hospitality, giving priority to elderly citizens with no financial resources or family, and those in situations of social exclusion.

Well, folks, that wraps up the tour.   I hope you enjoyed it!  If you did, or if you have any questions, please leave a comment.  And now if you'll excuse me I have some hiding out to do... 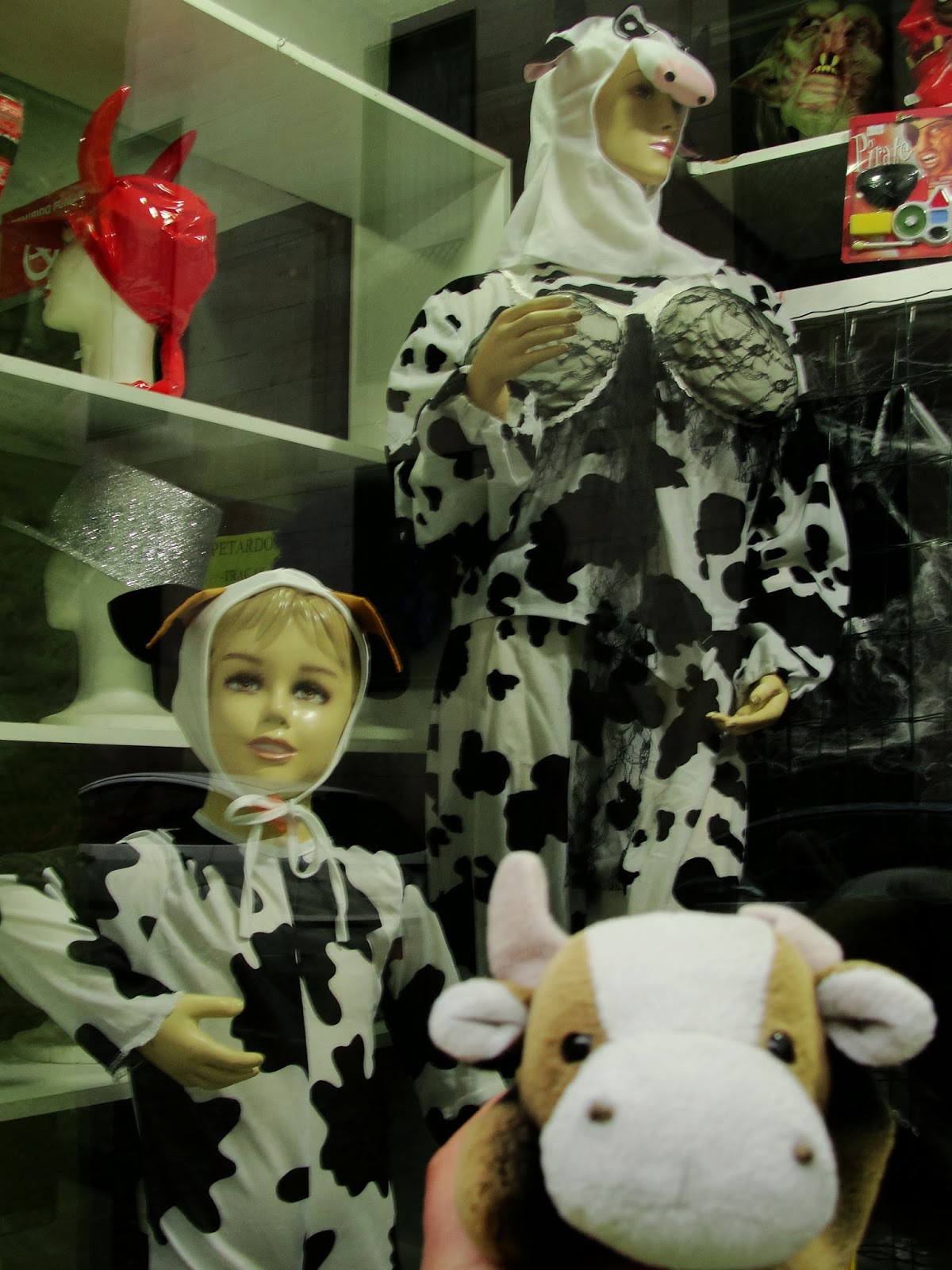 why I stay inside, exhibit #395
Posted by Slowly Global
Email ThisBlogThis!Share to TwitterShare to FacebookShare to Pinterest
Labels: spain, western europe