The general plan for Spain was to head north from Barcelona and then go west, keeping to the coastline as much as possible for the scenic views. From Pamplona we had a few options:


Guess which option we picked?

The absolutely stunning video of the Cares Gorge found on this blog post, along with numerous online recommendations praising the Picos de Europa, resulted in a vague plan to hike the gorge on Jen's birthday - "vague" because (#1) it would require renting a car and (#2) the weather for Tuesday looked questionable.

We almost gave up after learning that a car rental in Llanes would be twice the amount we were willing to pay. Luckily, our friendly hostel manager pointed us to the rental car shop in Posada (two towns over) which was exactly what we were willing to pay. Since we were literally sleeping at the train station, getting to Posada would be no problem.

The weather required some consideration. The gorge hike follows a trail etched out in the mountain with no rails or ropes along the edge. If you watch the video linked above, you can see the narrow path and the depth of a possible fall. Was it dumb to try this 20km hike on a slippery rock path on a potentially rainy day?

Luckily again, though, the weather held out until we neared the rainier side of the mountain around 8km so we just turned around and hiked back. We didn't make it all the way to Cain but that was fine - just a few kilometers on this amazing trail would've been worth the price if the car rental. We understand that summer can be quite crowded and miserably hot, but because of the off season, we only saw one runner, two hikers on the path down below, and a bazillion goats. And Jen's hands stayed cold pretty much the whole time.

Our pictures won't do the day justice but here are just a few. Many, many more start here. 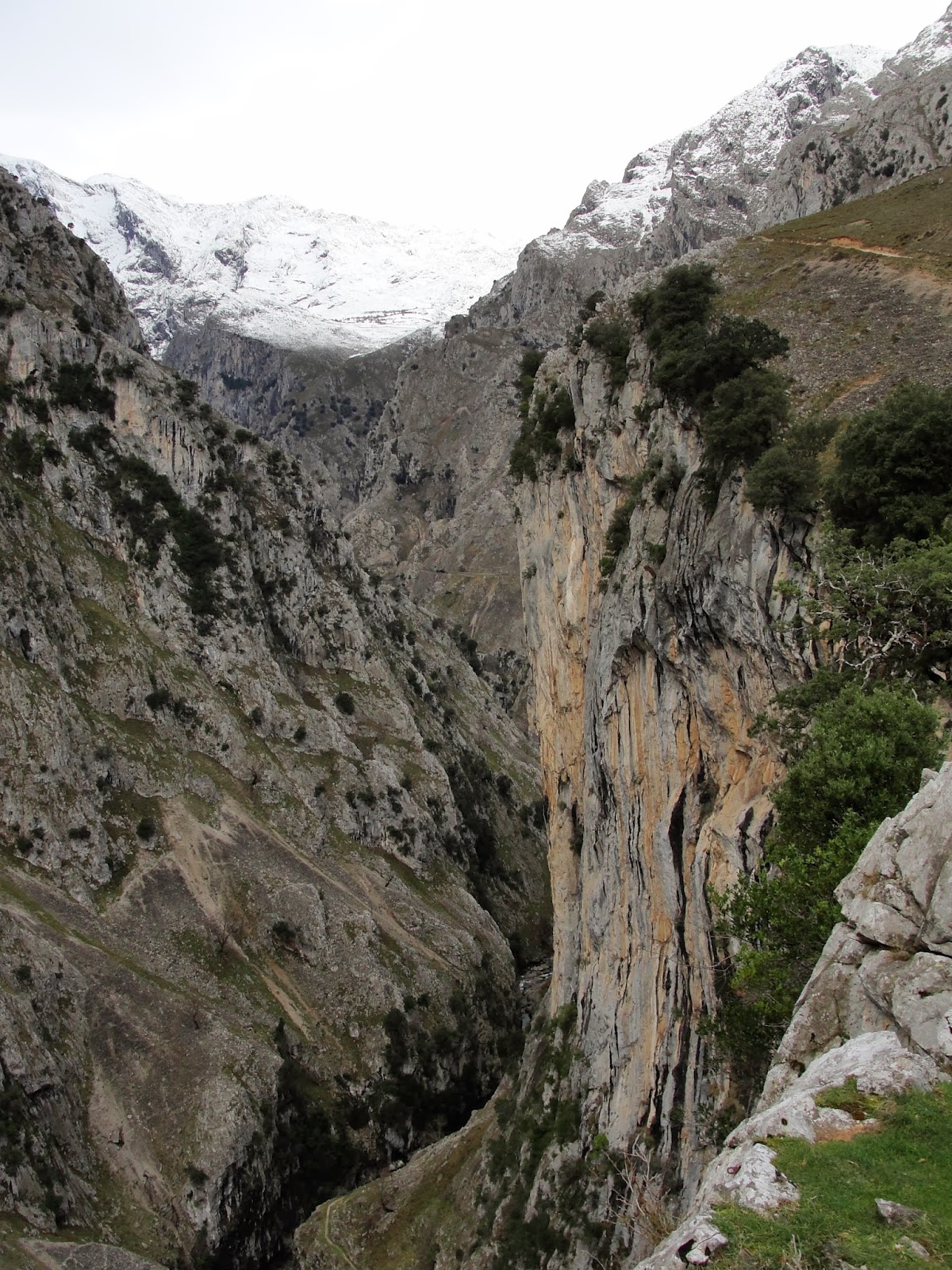 the trail is at the top right of the photo 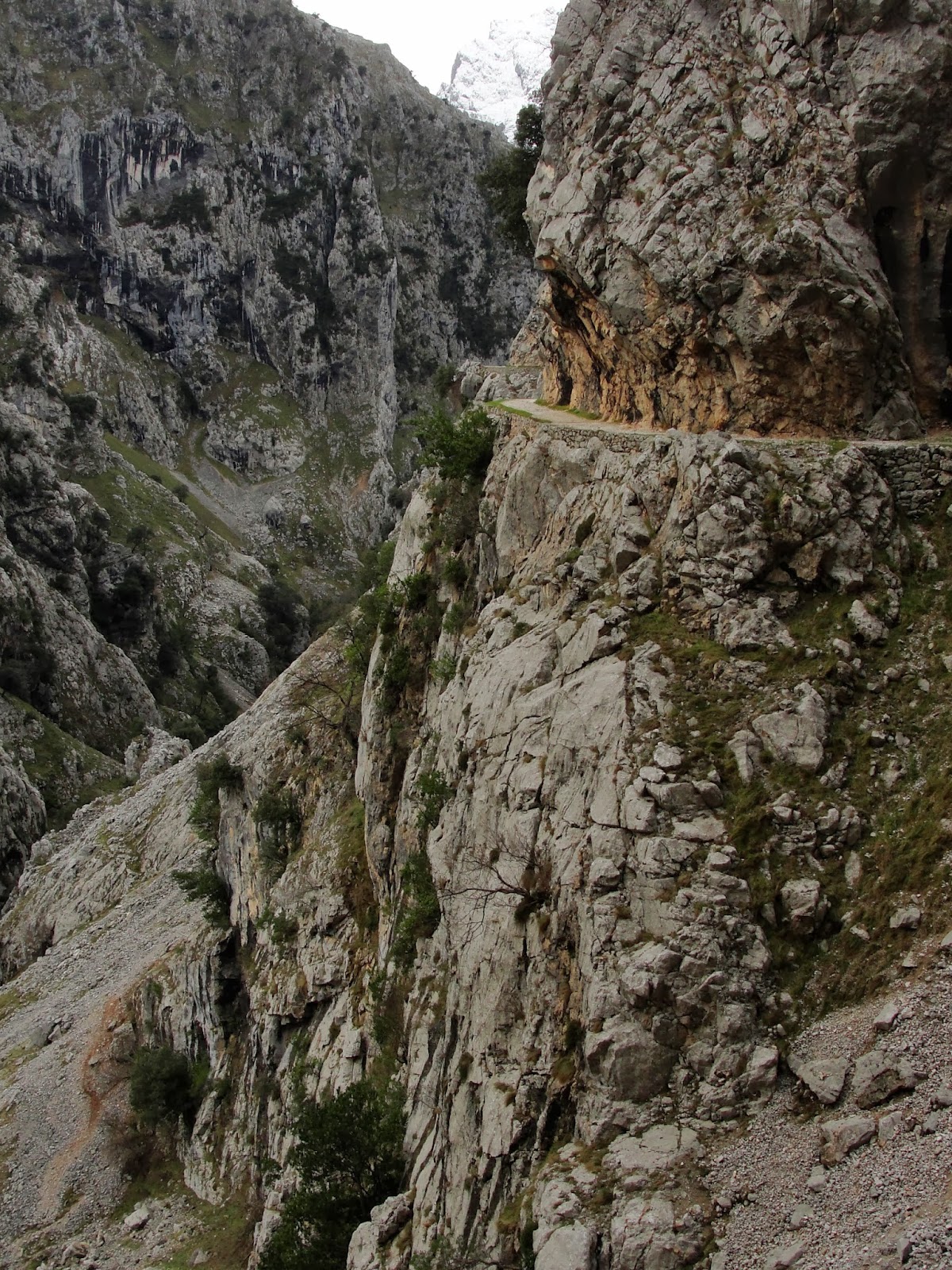 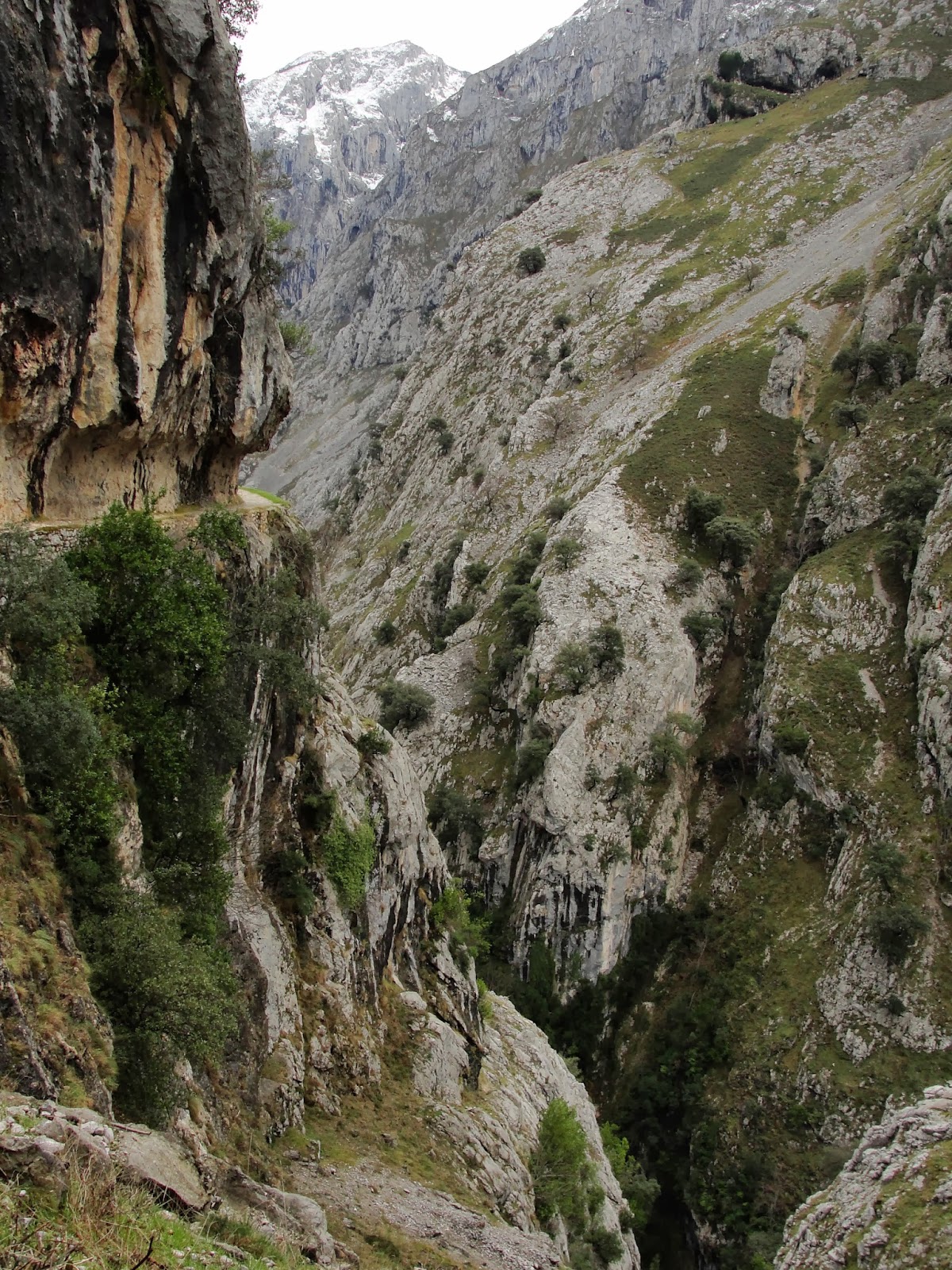 ... carved out of the mountainside 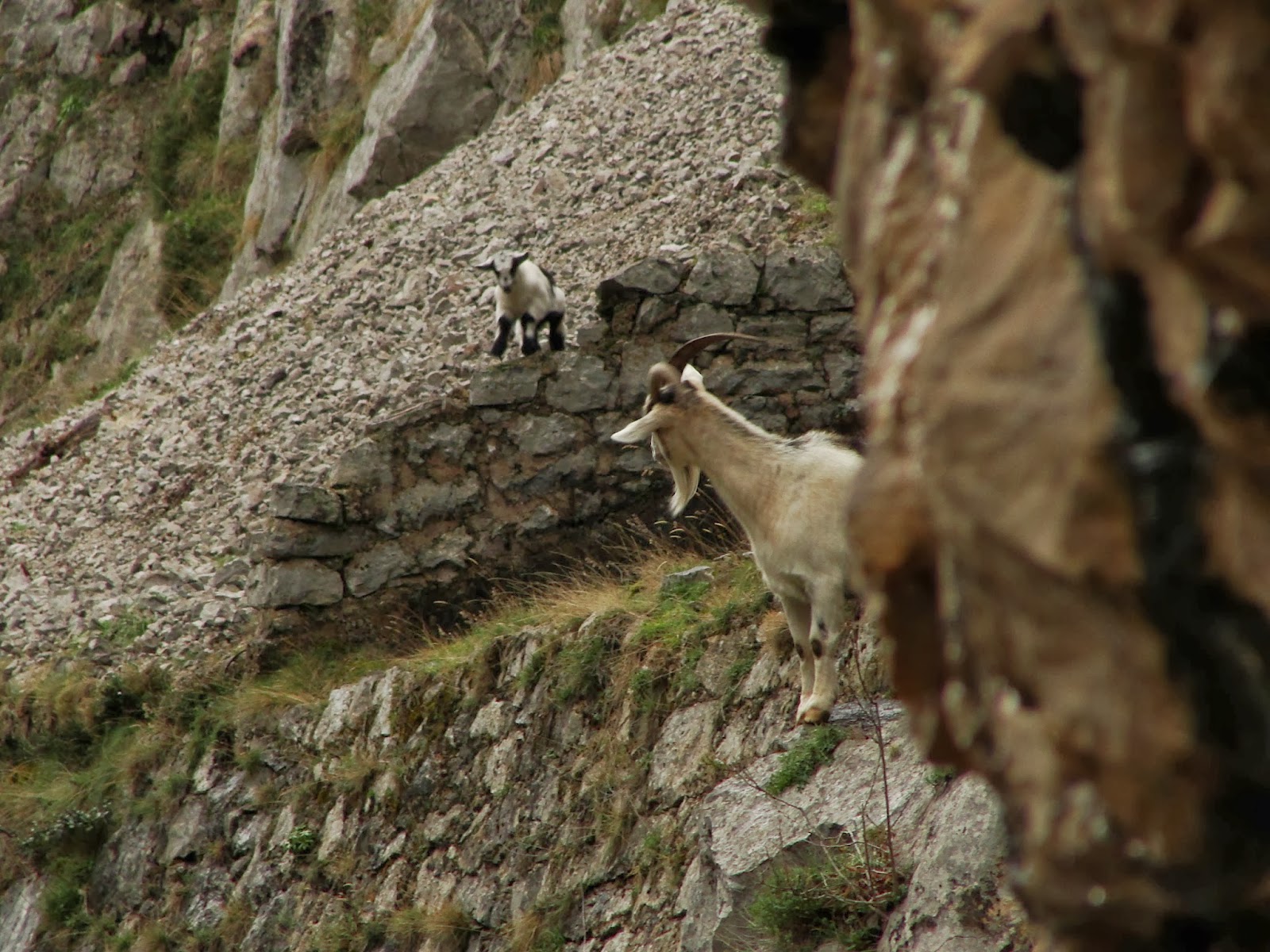 a kid got stuck -
Mom had to coax her down 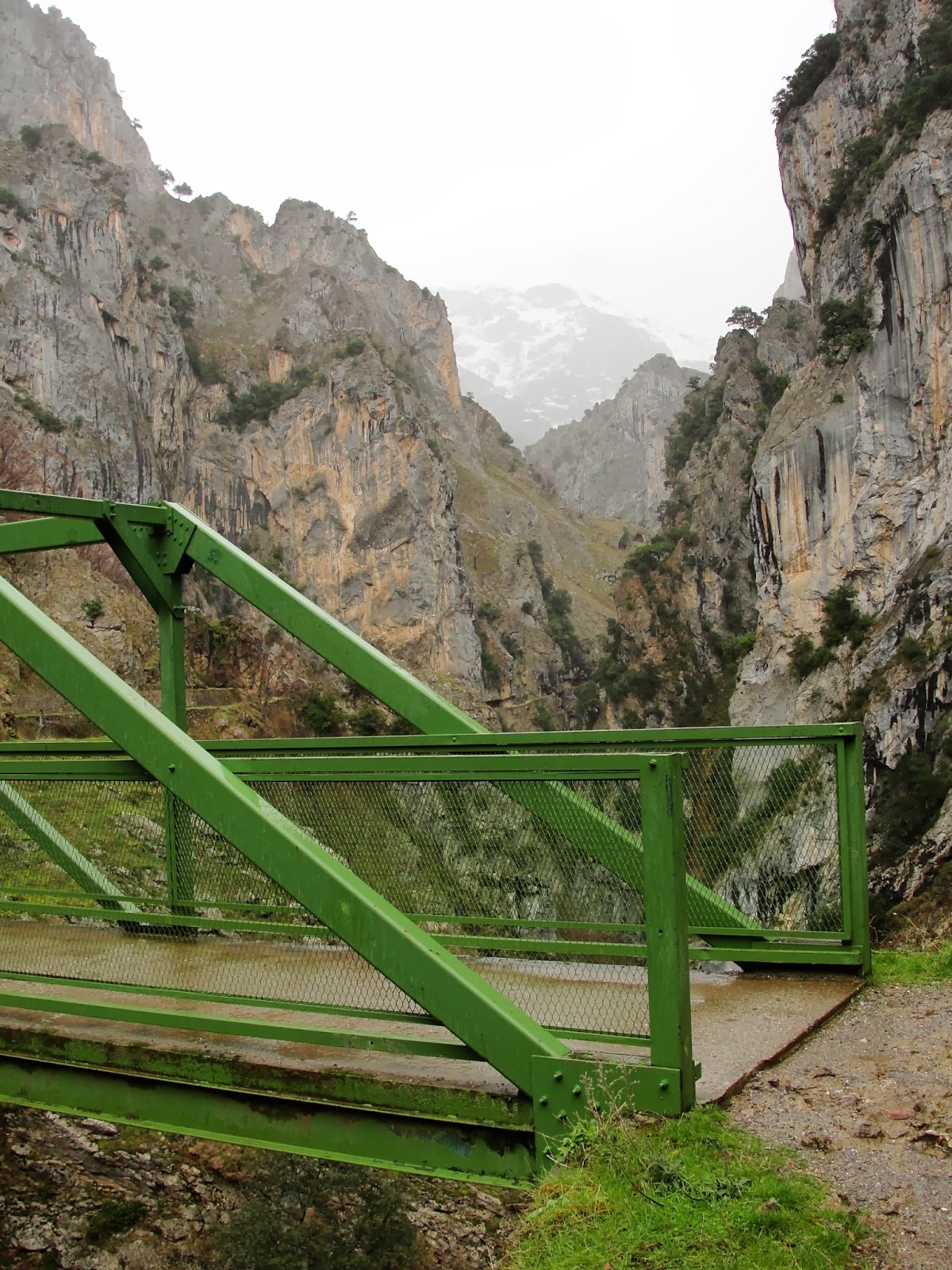 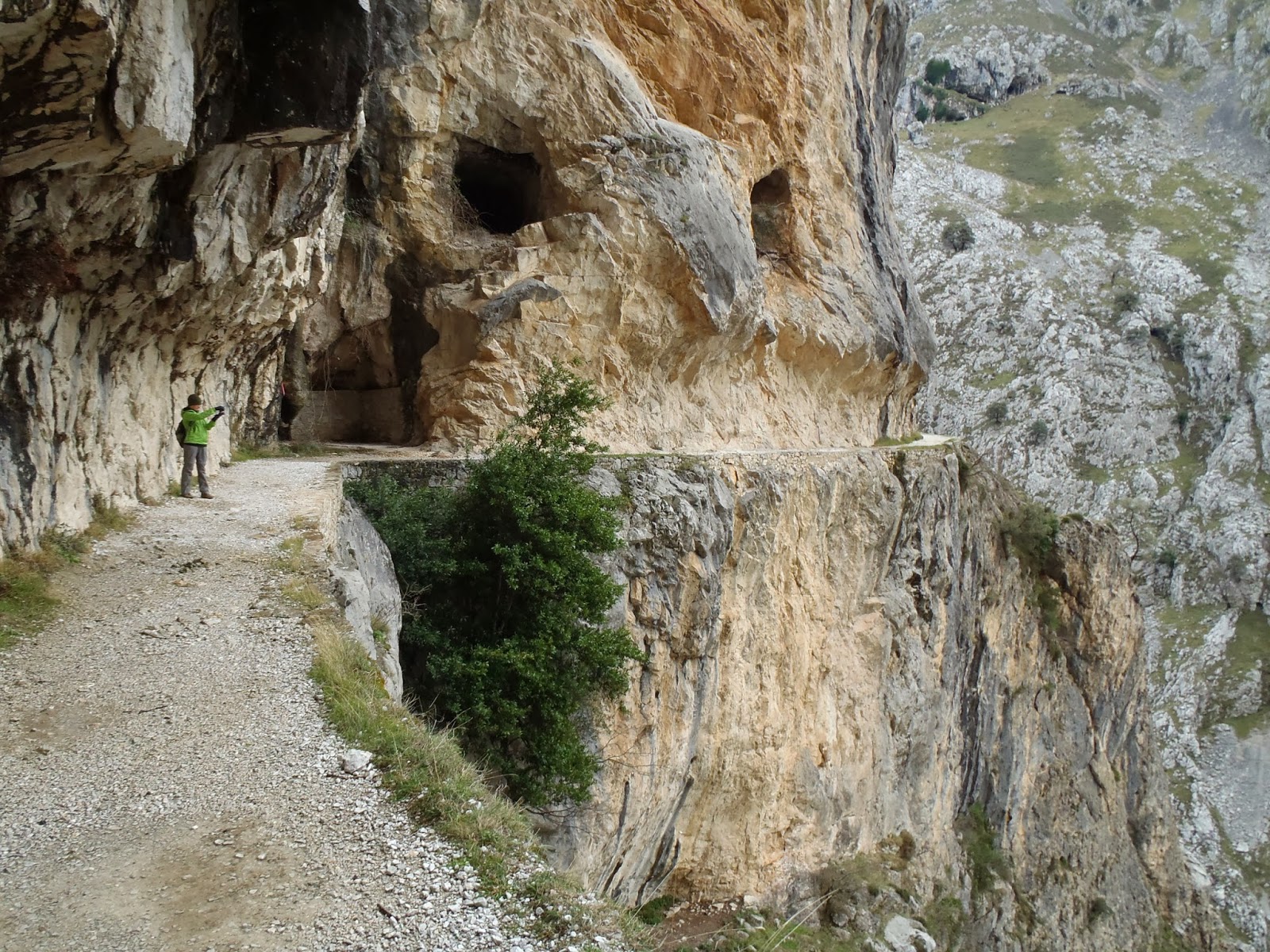 specks in The Universe,
merely specks

This was possibly the best hike we've ever done. If not it's definitely in the top three. If you are anywhere near the Picos de Europa it would be a crying shame to skip it. 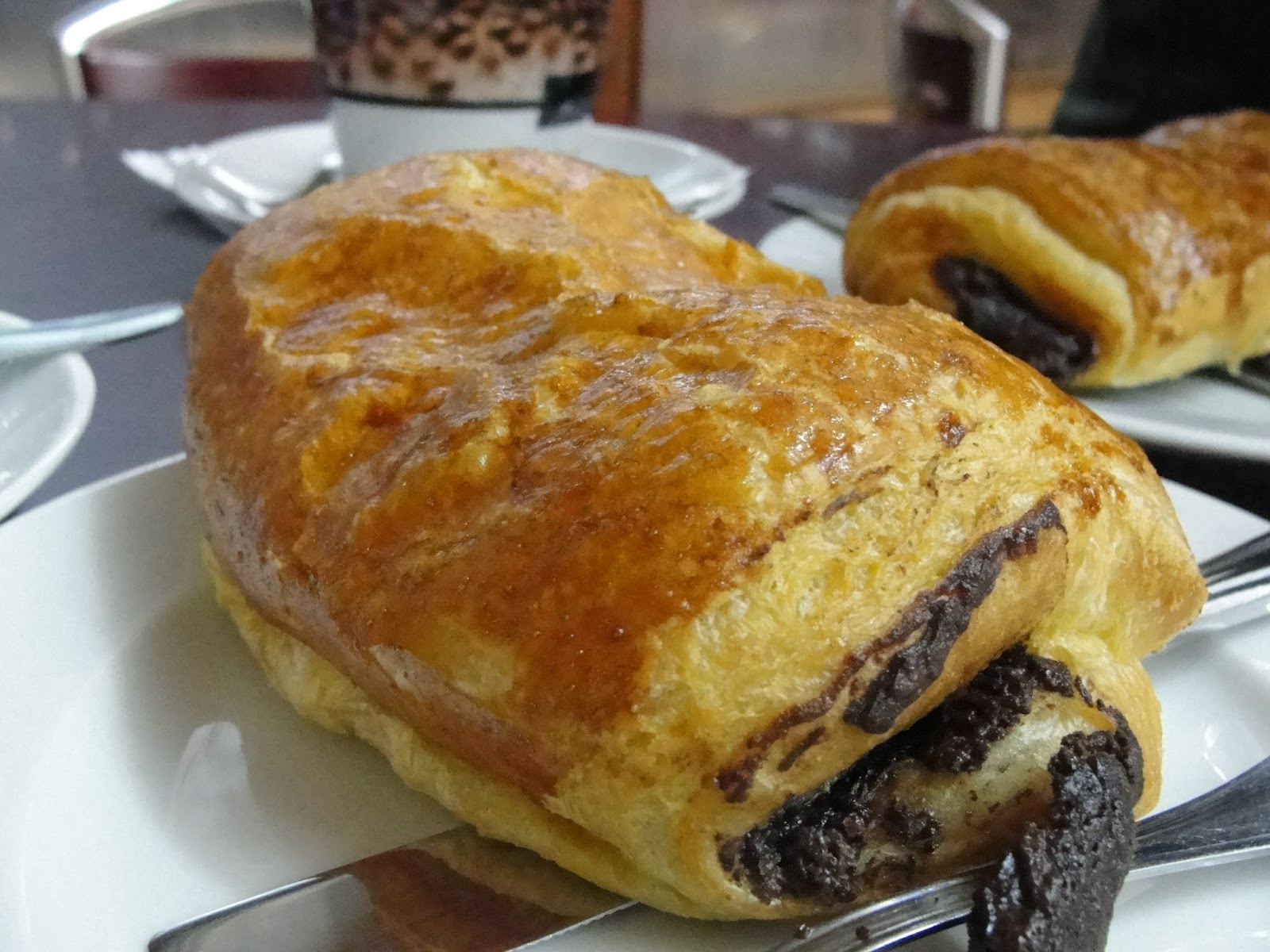 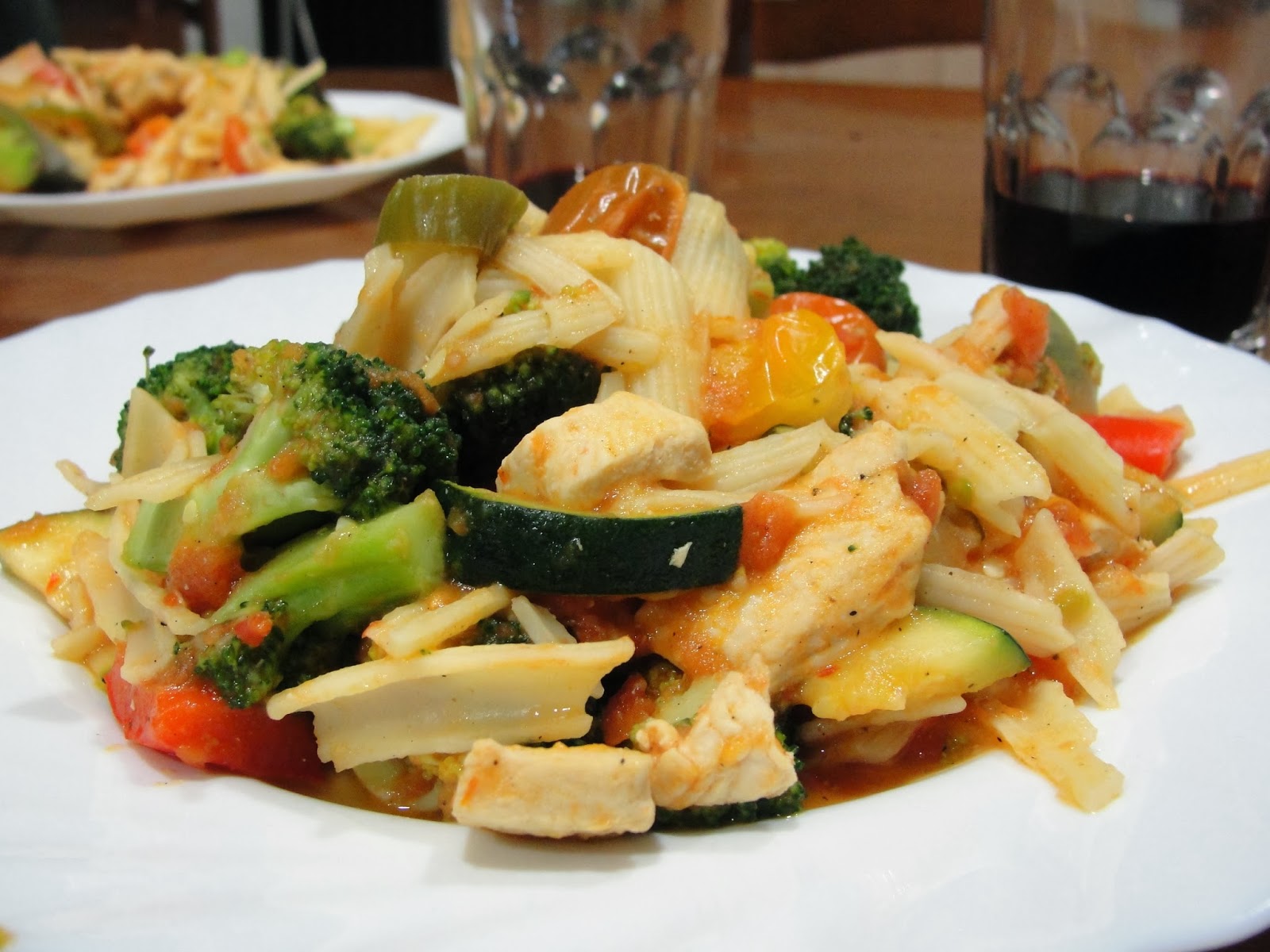 otherwise, meals cooked at the hostel 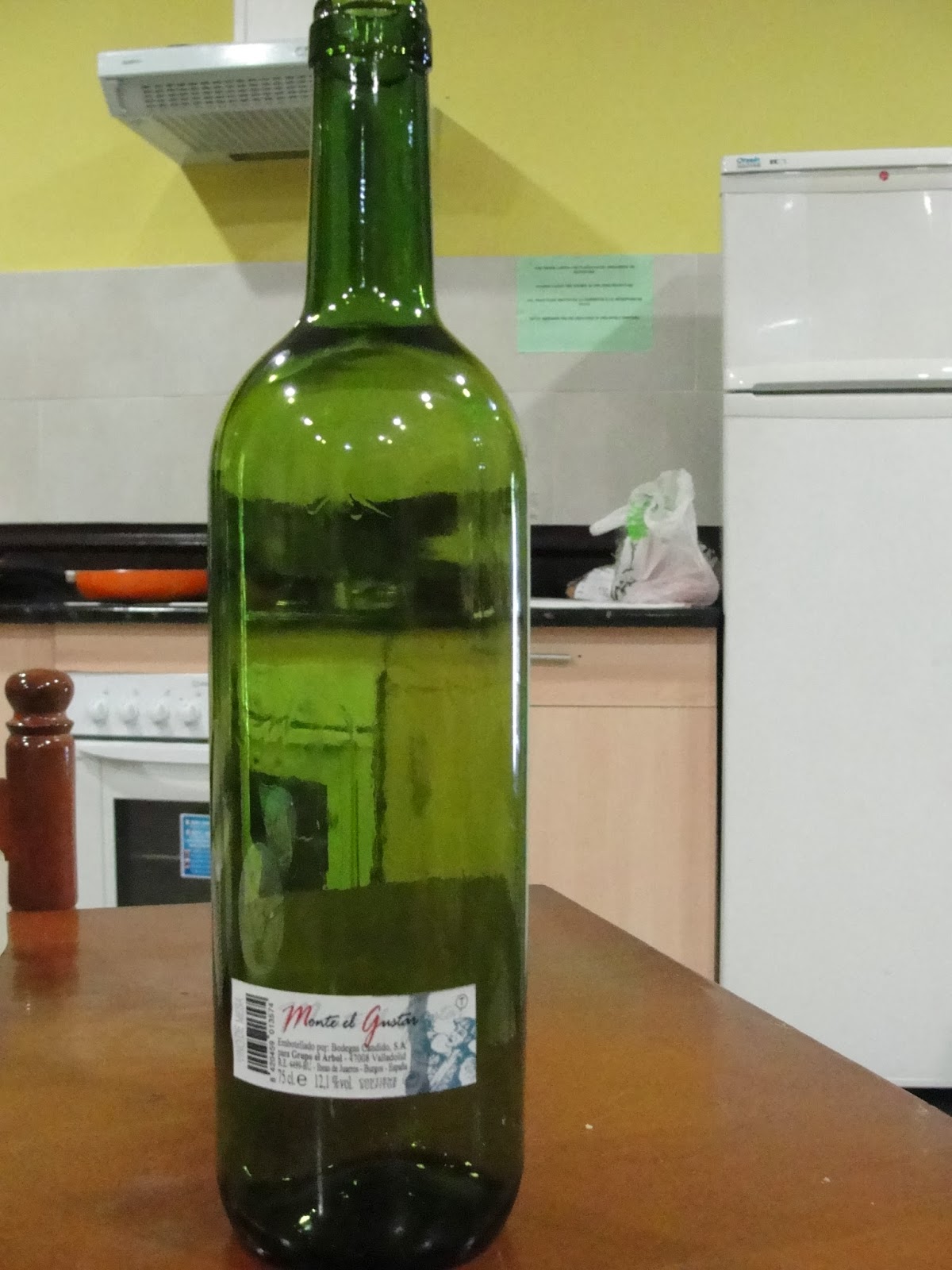 and some really good €1 wine 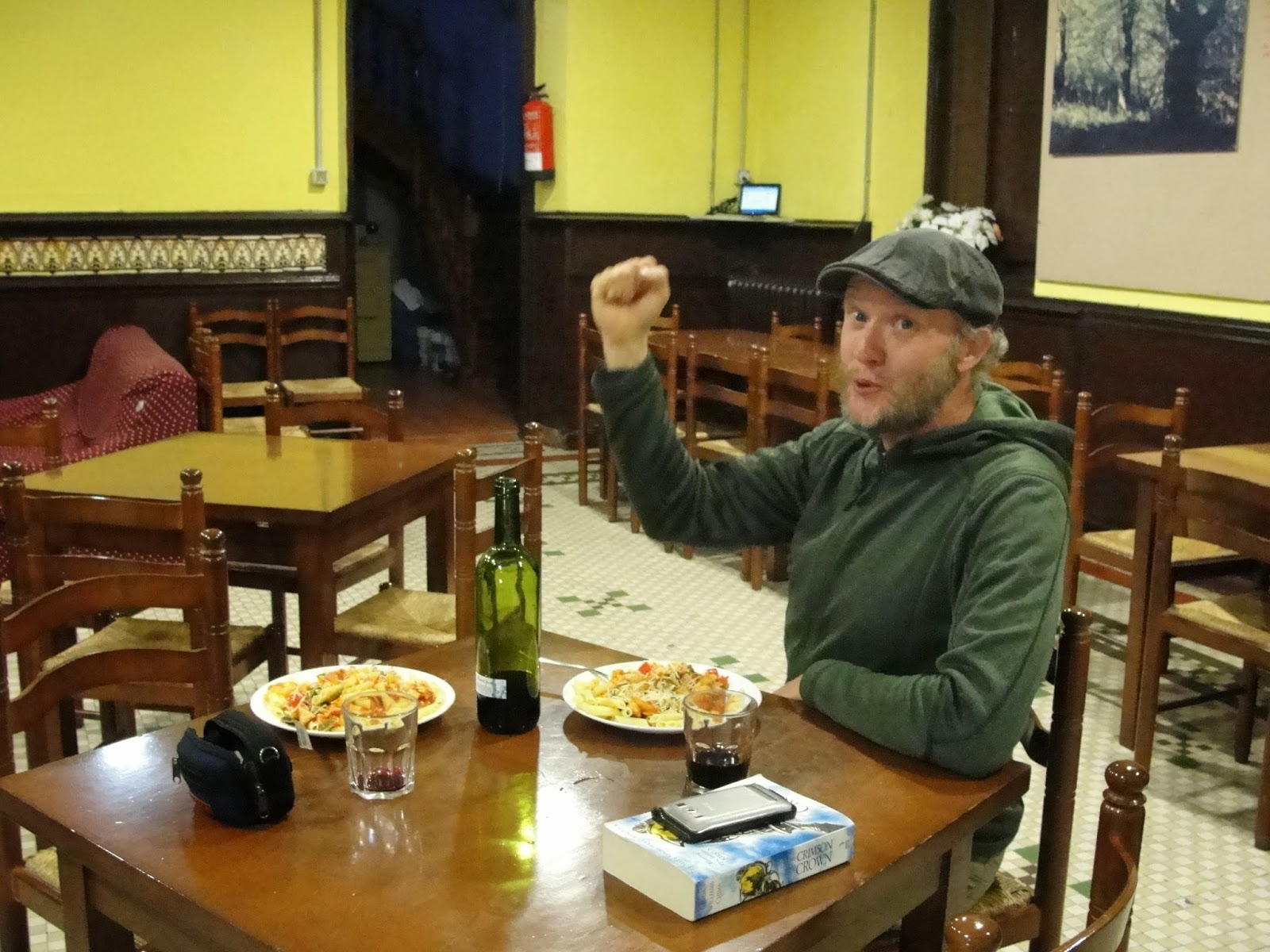 Only a handful of trains went through each day and the other guests left on our second day so it was pretty quiet, and once again the owner left each evening around 7pm. And we had all the Simpsons in Spanish we could ever desire! Despite the slightly creepy factor of being alone in an empty train station it was just fine. 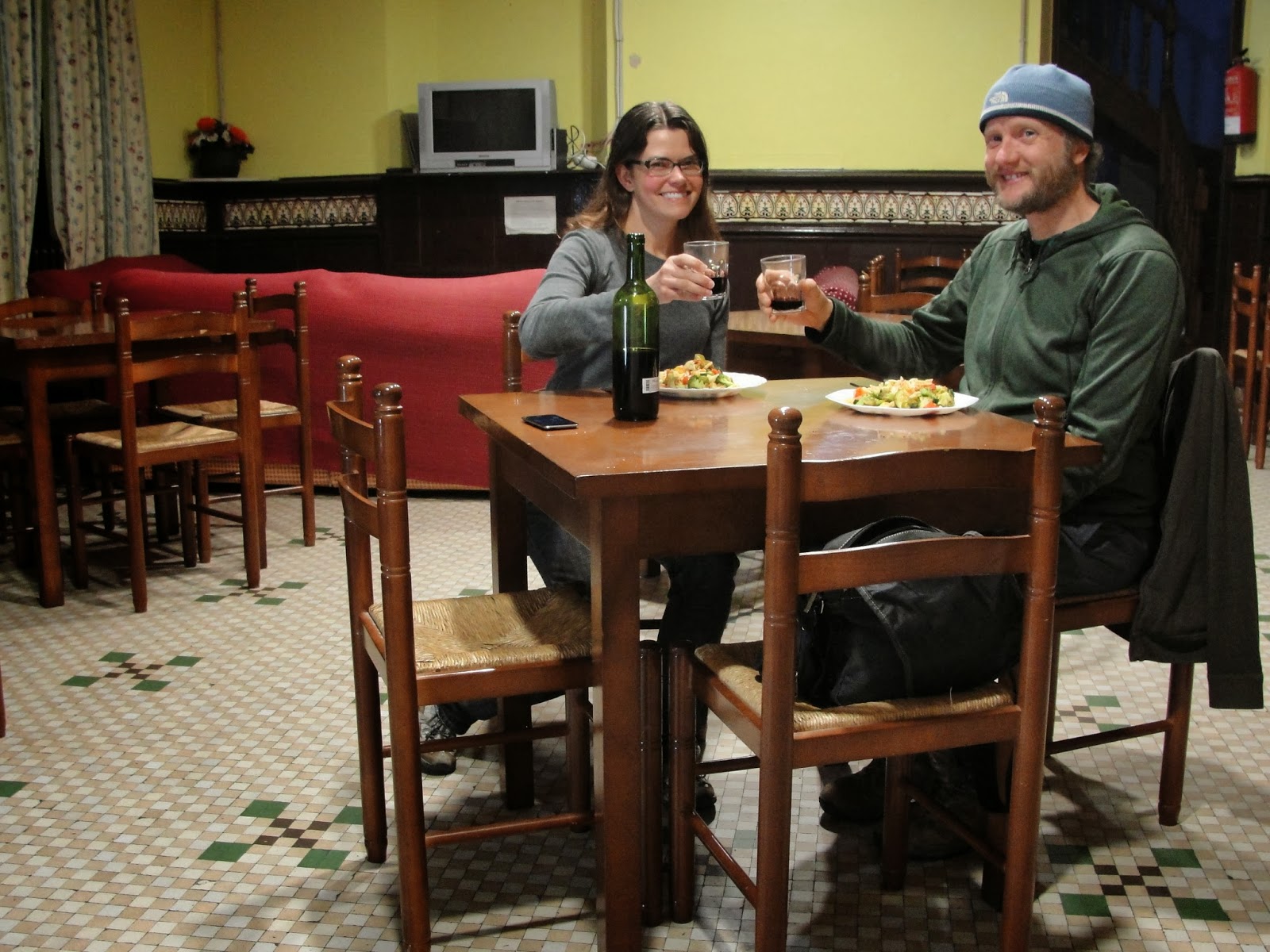 Meltdown notwithstanding, Llanes was the perfect place for a coastal stopover. Looking forward to more of these in Portugal!
Posted by Slowly Global
Email ThisBlogThis!Share to TwitterShare to FacebookShare to Pinterest
Labels: spain, western europe