You're on your own for five days in Quebec City... go!

Wednesday morning: as your partner in crime heads to the airport, you head down to la Marche du Vieux Port and admire all the lovely local produce. 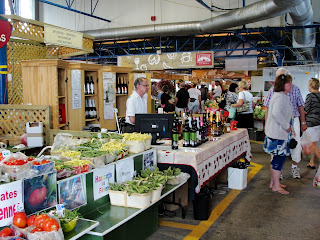 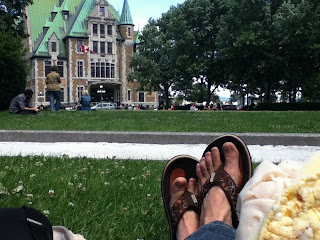 it's actually a train/bus depot

... and wander through the fortresses in Vieux-Quebec and along la Promenade Gouverneurs for great views... 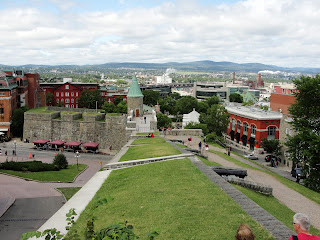 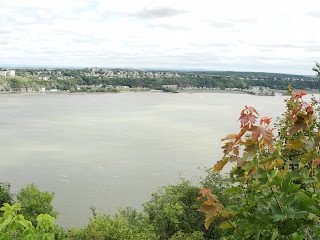 ... and the St. Lawrence River

Have your view interrupted for a moment by three boys in blue ponchos who stand silently right in front of you waiting for your reaction - mine was, "oh boy, and so the weird French artist immersion begins". Which I said out loud. They laughed.

Meander down the boardwalk and catch more weird French street artists at work, then through the cobblestone paths of Old Quebec. 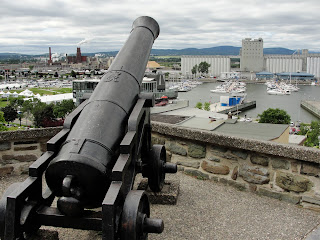 Have dinner at the hostel and chat with the nice young tourists who are on brief excursions; watch as they marvel at the thought of a 90+ day Canadian road trip, let alone a year+ on the road.

Thursday: breakfast at the hostel (Cheerios + peanut butter = magic!), then a tour of la Citadelle where you stare obsessively at the royal goat during the changing of the guards. 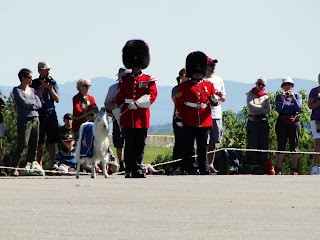 
Also listen to the stories told by the guide and wonder if you actually learned any of this history in school.

Back through Old Quebec where you happen upon a free music show at Cathedral Holy Trinity. 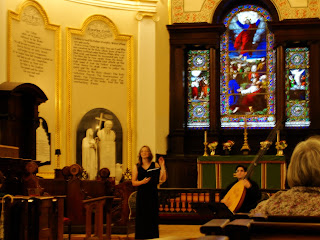 After lunch and a rest at the hostel, visit the maple museum and and Erico's chocolate museum. 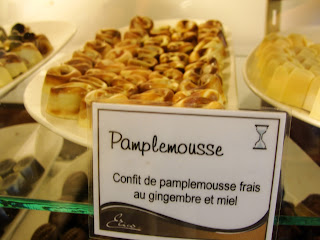 finally putting five years of French to use

Recover from your sugar rush by heading up Saint Jean, window shopping in the markets, and stopping in St John Baptiste cathedral where services are underway. 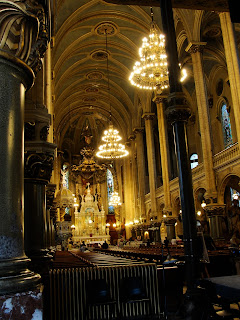 (oops
but what a lovely church!)

Head south through the fairly new Jardin de Saint-Roch and sit for a while, enjoying the garden and impromptu electric guitar player covering Hendrix. 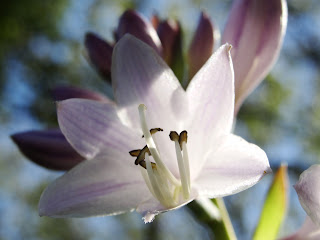 Discover the local Mountain Equipment Coop in up-and-coming St Roch, which looks remarkably like REI; also discover that you can't buy anything without a membership.  Get friendly advice from their staff for another camping store nearby (Latulippe), decide to make that tomorrow's adventure, take the long way back to the hostel and rest up for day three.

Friday: head to Latulippe in St Roch and happen upon an odd religious park which needs more research (as the signs were all in French and there was nothing about grapefruits). 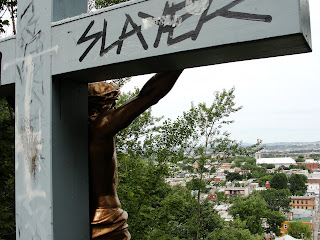 Slayer doesn't love you
this I  know


After Latulippe (butane purchased at last! we've been out since Waterton Lakes!), wander through St Roch's ethnic markets and colorful streets. 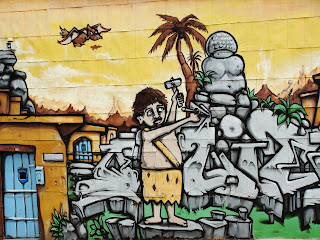 many murals were sanctioned by the city and painted by youth

Detour to the cemetery at the hospital, a nice tribute to soldiers of the Plains of Abraham and Sainte-Foy, then make your way to la Parc de l'Amerique-Latin. 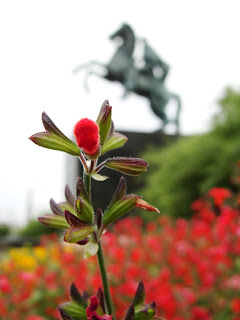 After lunch head up Saint Anne and people-watch, then hit Petit Champlain for more windowshopping.  Call it a day.

Saturday: back through Place d'Armes for more people-watching (yes, I did a lot of this - mostly because I had time, but also because it was FASCINATING to see what people found fascinating enough to photograph), then east to Villa Bagatelle, stopping at a used book sale in a church to rummage and purchase The Happiness Hypothesis (en englais... er, en anglais).  Get lost trying to find the museum and wander through St Patrick's cemetery. 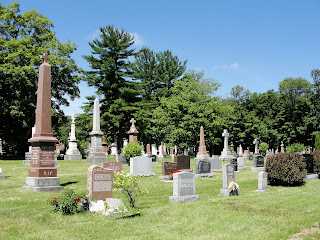 a much nicer place of eternal rest than the hospital cemetery

At Villa Bagatelle (which you walked right past several times), enjoy the strikingly different exhibits of Roland Giguère and Hector de Saint-Denys Garneau, poets instrumental to the Canadian literary movement who also painted, and appreciate the lovely hospitality of the museum host after some recent less-than-pleasant French Quebecian encounters.

Make your way to le Parc du Bois-de-Coulogne, a setting renowned for its beauty and tranquility. 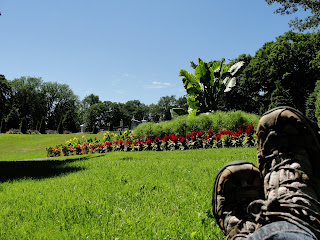 I have eaten lunch in worse places

Finally succumb to 50 miles of walking and a heck of a sinus infection, take a power nap, then hit the port (along with everyone else in the city not attending the Celine Dion concert) for more freaky French art at the free Cirque du Soleil show. 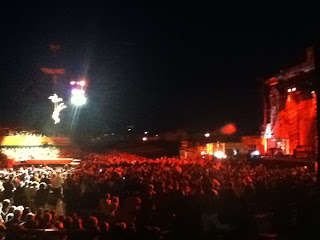 Stop by the Bunge to watch a few minutes of the light show tribute to Norman McLaren, make a mental note to research this fellow, then sleep for 12 hours.

Sunday: wonder what to do.  Skip the $18 Musee de Beaux Artes even though you want to see the Alfred Pellan collection - there are many more museums in your future, after all, pace yourself - and head back to the Marche du Vieux Port for strawberries, then to Saint Anne for maple gelato, and sit for a while to enjoy your bounty. 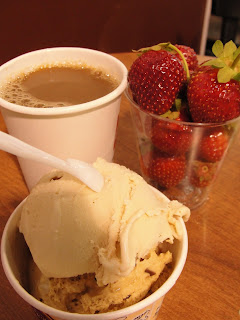 As the crazy wind picks up again, hit the hostel for an afternoon tea and then wander until you come across the Festival des journees d'Afrique, where a Bob Marley cover band briefly unites locals and tourists from all over the world. 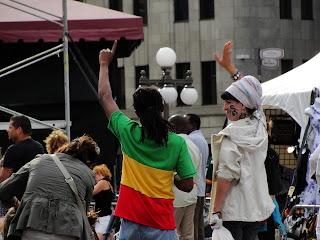 Endure the wind a bit longer to check out the city at night... 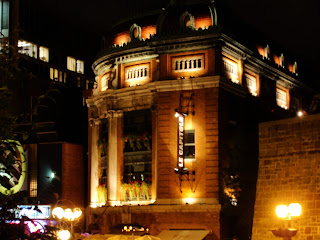 Finally, at 11pm, attempt to sleep while the 60 year old lady in the bottom bunk whacks the bed frame for an hour as she rearranges her suitcase a hundred times.  (This is the same woman who, earlier in the evening, sternly told me to "mind her coat" - which had been thrown on MY bed.  And the same woman whose alarm went off for 20 minutes at 5am this morning before she rummaged through her bag to turn it off.  And the same woman who sat in the kitchen for an hour this morning looking at photos on her iPad - time she could've spent REARRANGING HER SUITCASE instead of doing it last night.  Good times, good times.)

Quebec City, it's been fun!  But I am ready to reunite with my partner in crime and get back to nature for three weeks.  Gaspe Peninsula and Forillion Provincial Park, we're coming for ya! 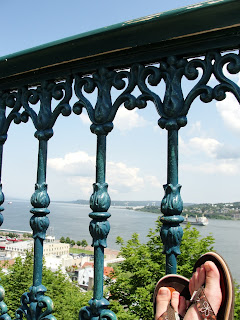 au revoir!
Posted by Jen
Email ThisBlogThis!Share to TwitterShare to FacebookShare to Pinterest
Labels: canada, music on the road