Five things we learned about Nubian goats over the last few weeks, in no particular order:

1. They are curious, friendly, gentle, and incredibly sweet. Our first night we were introduced to a few of the does and bucks who immediately nuzzled our hands and nibbled our t-shirts. 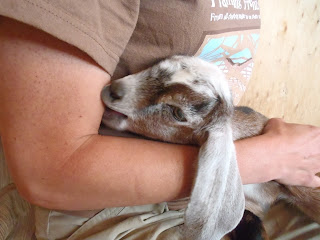 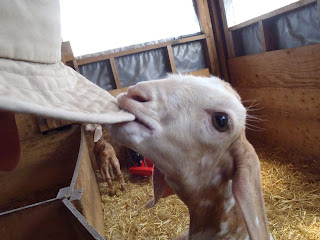 From that point, whenever we passed they would bleat a greeting and usually walk over to poke their head through the fence. 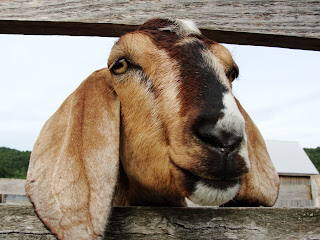 The littlest goats would gallup over to investigate us whenever we went in their pens. (OK, that was probably because we usually went into their pens with grain.)

And so gentle! Occasionally they would head butt each other but no real harm was ever done. Jen actually panicked one morning when a large buck scaled the fence during their morning feeding - being that close to such a strong animal can be quite intimidating - but he just nudged Jen out of the way, got a snack, and was led calmly back into the pen. By Patrick. Because Jen was still a little freaked.

2. They are herd animals, almost to a fault. During our stay several of the young groups were relocated to new pens/pastures, and in the process one of the groups was split up. The remaining group of five screamed for days. (Actual days! Do goats not get laryngitis?) 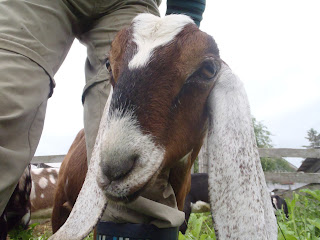 calming the masses during the great relocation of summer 2013

Then one night we heard howling from the baby so we went outside to investigate. Turned out his three buddies had gotten into one of the does' pens, and instead of joining them he stood outside the pen and screamed, and didn't stop until we reunited them. (Goats also don't need much of a barrier - in this case even a lightweight wooden fence with large gaps between the slats was seen as impassable by this little guy.) the baby during a calmer moment

3. They do not like to get their feet wet. It was a really wet spring/summer at the farm, so to combat this issue while the pens and pastures were set up, the goats had rocks and wooden platforms to stand on. The little ones found three small boulders by the house to practice climbing; one of Jen's favorite moments was seeing the next-to-youngest stand her ground against the older ones who tried to push her off the rock. 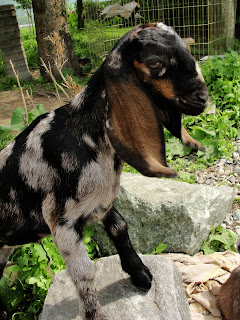 king of the mountain

4. They grow really fast! The youngest was just a few days old when we arrived, and by the time we left he was able to jump over the gate just like his older companions. 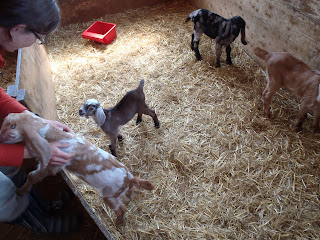 size matters not
look at me
judge me by my size, do you?

5. They. Are. HILARIOUS. They were a bit out of their element with all the wet and with us there mucking with their routine, so they were quite loud most of the time. Once in a while the constant noise got to us but we honestly just spent a lot of time laughing.

One goat in particular had a great bleat that sounded like "YEAH!" We had a lot of planning discussions in the camper on rainy days, and she would often wholeheartedly affirm our decisions from the barnyard. Hilarious.

They also make this sniffing/snorting sound which sent us into fits of giggles every single time. We perfected an imitation and still do it at least five times a day at random intervals. Ask us the next time you see us. Hilarious.

One day a little one was munching on some tree bark and got sap on her bottom lip. She came over and attempted to use our pants as a napkin to try to get it off. Hilarious. 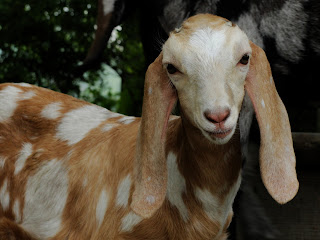 And the floppy-eared side hop they do, and the way their tails wag when they're excited? It's impossible not to laugh when you see it. The world would be a much happier place if people did this same side hop whenever they got excited.

And not speaking of goats for a moment, if everyone lived in the Gatineau Hills they would be side hopping all the time. Our hosts have a beautiful space in a beautiful part of Quebec - so beautiful that every time we returned to the farm after an outing we would pause before crossing the bridge, look up at the hills, and say "Wow, this is really beautiful."

Outings were good though - 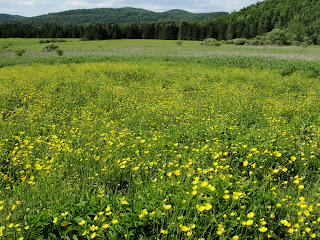 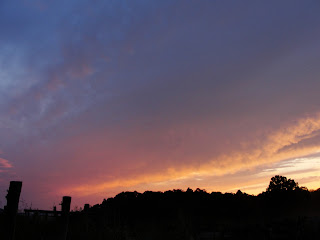 sunsets off our "porch" 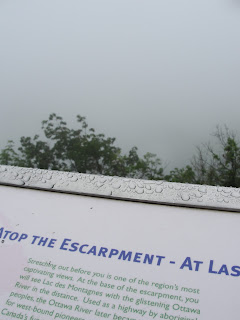 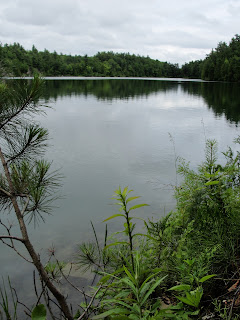 and a rain break at Pink Lake 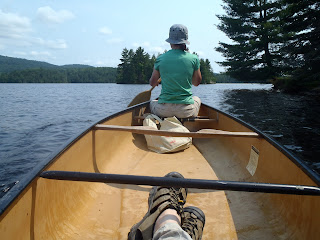 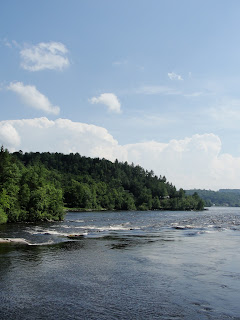 napping by the Gatineau River in Wakefield 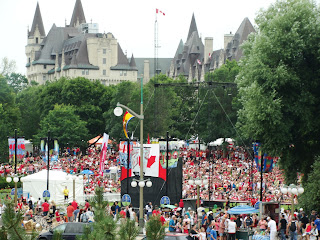 
And if we didn't feel like going for an outing we would sit in the camper and enjoy the view. 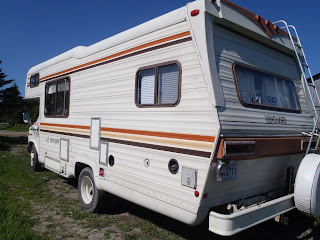 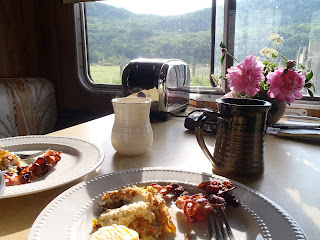 not a bad breakfast view
occasionally with horse conferences nearby 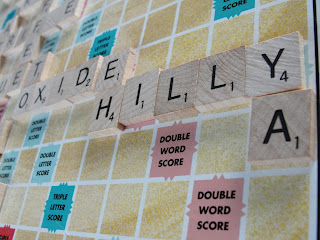 rainy day Canadian Scrabble in between admiring the view:
"land's hilly, eh?"
"ya"

There were lots of other animals at the farm - chickens, roosters, sheep, pigs, horses, donkeys, a llama, a peacock, lots of farm dogs and a farm kitty that looked eerily like Her Majesty. Lots of baby animals were born during our stay and there was never really a dull moment.

But really, when all is said and done, it's all about the goats. 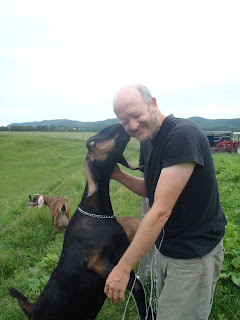 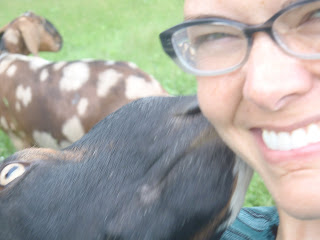 And of course it was about our wonderful hosts who completely provided the Canadian hospitality we have come to know and love. We had a great time on and off the farm, so much so that we signed up for a fifth WWOOFing opportunity, this one also near Ottawa. (Back in Waterton Lakes we learned that our Nova Scotia farm fell through so we were considering a HelpX hostel gig there instead. We've now decided we're going to see how a New Zealander-turned-Canadian does pasture rotation before heading east.)

But first: a mini vacation for TURF and the beautiful city of Toronto!
Posted by Slowly Global
Email ThisBlogThis!Share to TwitterShare to FacebookShare to Pinterest
Labels: canada, living like a local, voluntourism, WWOOFing etc