In 2013, I got the first day of President Obama's second term for my birthday. At the time I honestly wasn't sure what could top that (although the Cares Gorge hike in Picos de Europa National Park back in 2014 did come close). 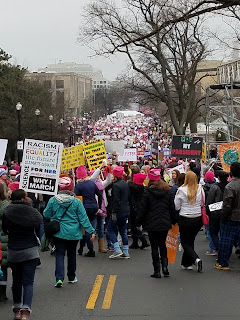 The plan was to leave the house at 8am that morning. At 7:59am my boots were laced. At 8:15am I started nervously bouncing around my friend's townhouse, edging them toward the door as politely as possible. At 8:45am my friend suggested making eggs for breakfast and my heart actually sank for a moment. But! The egg idea was scrapped in favor of bagels en route and by 9am we were on our way. 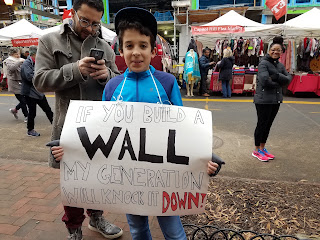 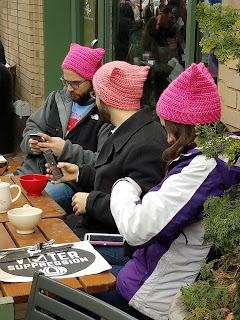 "this is what a feminist looks like"
Streams of pink knitted hats started to appear around Lincoln Park. After quick stops at the bagel and coffee shops - as quick as the crowds would allow, anyway - we headed up Pennsylvania Avenue. This was the same route I'd taken the day before and the crowds had picked up significantly. 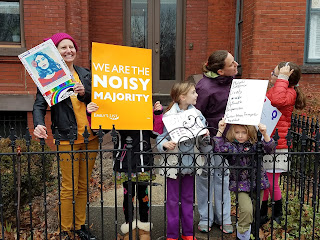 "I know signs - I make the best signs -
they're terrific - everyone agrees"
Unlike the steady trickle of red ballcaps around this area the day before, this was a mob. A purposeful, peaceful, pink mob. I couldn't look around too often, or too long, for fear of tearing up. 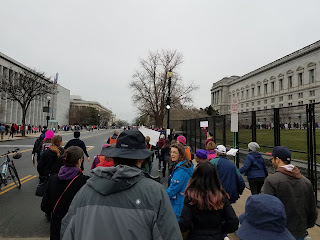 "we will not go away, welcome to your first day!" 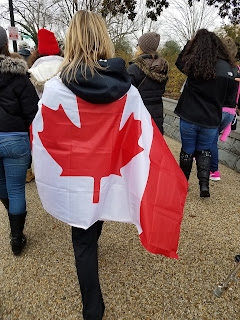 "I'm too angry to be clever" 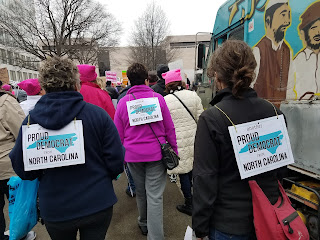 "my mama don't like Trump... and she likes everybody"
A mass swarmed in front of the Capitol for photo ops. I have to admit, it was a pretty good photo op. 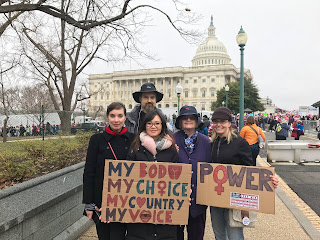 "this is what democracy looks like!"
We wiggled our way into the masses near the first jumbotron. We could hear, but we couldn't see, and the crowds were insane. There was no cell or internet service and all hopes of hooking up with other friends were immediately abandoned. Didn't matter. We were amongst 500,000 friends. 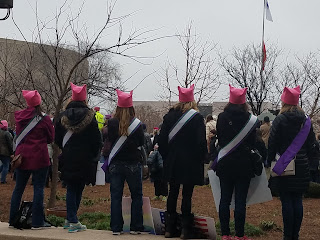 "if you take away my birth control,
I'll just make more feminists"
Eventually we backed up a bit for more space and found a good spot to stand, sit, wander, listen, and watch the edge of the jumbotron for a few hours. We missed Gloria Steinem's speech, but Ashley Judd's speech was energizing. Cecile Richards' speech was full of hope. Sophie Cruz's speech brought the crowd to a roar. Van Jones was blunt yet positive, Michael Moore was... well, Michael Moore, and all of the march organizers were so grateful for such a wonderful turnout. Once again, I had to keep moving around the crowd to keep from tearing up. 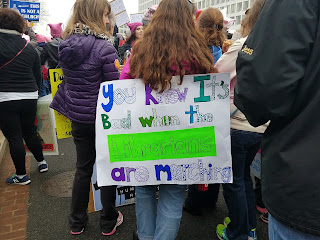 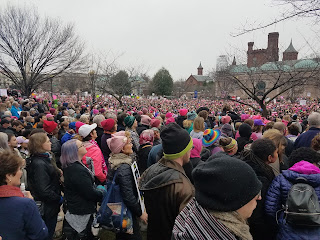 "so bad, even introverts are here"


Around 1pm the crowd got restless and started moving toward the march route. We heard rumors that the mass was too big and the march had to be cancelled, but that turned out to be an alternative fact - after a short wait we slowly made our collective way up Independence Avenue and around to the Mall. 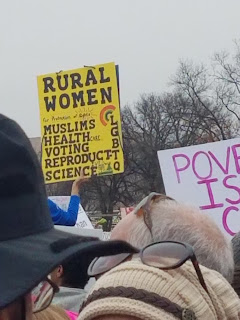 "it's 2017 - I should be advocating for honey bees,
not basic human rights" 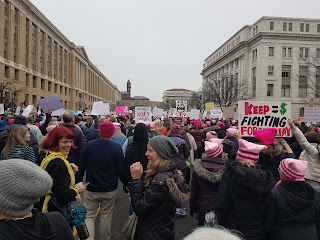 "there are more people here today than yesterday" 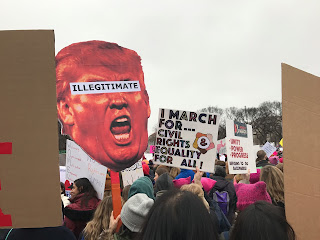 "we need a leader, not a creepy Tweeter!" 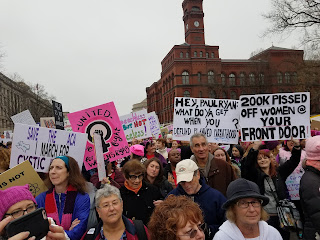 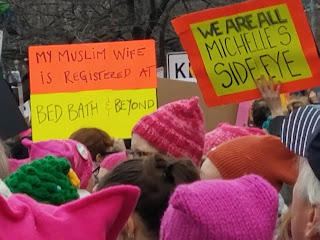 "without immigrants, Trump would have no wives" 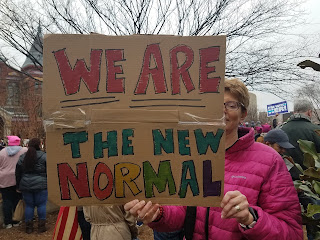 "grab 'em by the patriarchy!" 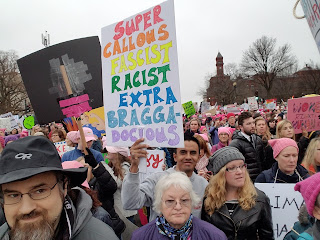 "just... UGH"
My friends and I reached the turnoff for the White House around 4pm and, drained physically and mentally, ditched the crowd and started the long walk home. Along the way march volunteers collected random, small pockets of trash and cars honked in support at the waves of pink knitted hats heading toward Union Station.

I know there were controversies about this march, on a whole lot of levels, and I also know that some good, hard conversations have finally started to happen because of this. (Because of all of this, actually.) That's good. Keep them up.

I know there are alternative facts about the number of attendees (in DC and around the world), the number of arrests, the amounts of trash left behind, the women who can afford plane tickets and posterboard but can't afford birth control, and so on. Luckily, I know that alternative facts are not reality, and all the people who believe this stuff will get a good dose of reality pretty soon (if they haven't already).

I also know that a lot of people doubt that this momentum will last. I don't care that the right thinks this - I would expect nothing less. But I do care that this comment is also being thrown about by men on the left. To those men, I say this: 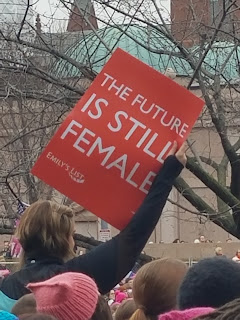 (Note: pictures are mine; quotes below pictures are from signs or chants seen or heard in DC or around the world on Saturday.)
Posted by Jen
Email ThisBlogThis!Share to TwitterShare to FacebookShare to Pinterest
Labels: united states