We were really fortunate to witness several peaceful protests during our international travels. The most memorable one was in Warsaw, Poland back in September 2013. Labor union members organized four days of action around job security, health care, and retirement benefits. We didn't understand all the words being said, but we got the gist through loose translations, and we stood in solidarity with them for a little while at one of their events.

I debated whether to post about the past weekend on our travel blog... Then I thought back to Poland, and I remembered that just a few months ago, Polish women boycotted work and gathered in droves once again to protest a proposed ban on abortion. Their "Black Monday" protest? It totally worked. The bill was abandoned.

And then I thought about how happy I was to represent the other half of Slowly Global, and my friends in Coos Bay, and Oregon, and around the US, and around the world, in my trek to DC. So here I post... (That's the "global" part. I had three layovers on my way there and back - that's the "slowly" part.)

The only other inauguration protest I attended was back in 2005 when George W. Bush Jr. won his second term.

His DC protest march was pretty uneventful - at least the one I attended that day. Several thousand of us walked the streets of DC and stood near the parade route, a few anarchist kids started setting things on fire and were shooed away by the police, Dubyah Jr. rode by, we booed and chanted, and then we all went home.

This time around, all my friends were participating in the inauguration boycott - turning off TVs, volunteering, going to the library, spending time with their kids, avoiding downtown if they were local - and I respected that. (To be honest, after the "Thanks Obama, #$%^ Trump" dance party at Little Miss Whiskey's the night before, and the small afterparty at my friend's house that ran until 4am, I wasn't really in the mood for a sea of red ballcaps, white faces, and that man's name everywhere on Friday.) But the sociologist in me was curious, and thanks to my gracious Capital Hill hosts I could easily walk there, so around noon I headed downtown.

My friends didn't want to join me but they did want coffee, so we walked to a local cafe. In their neighborhood, dozens of yards still displayed quotes from the celebration of Dr. Martin Luther King Jr.'s birthday the weekend before. 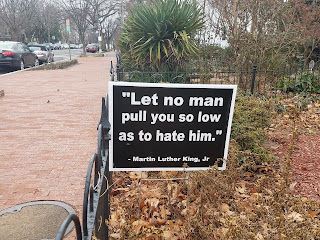 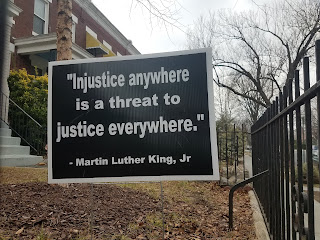 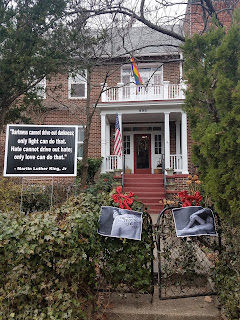 Washington DC, 2017
My friends headed home and I kept walking. As I got closer to the parade route, churches had opened their doors and were offering coffee, water, and clean bathrooms to anyone in need. Red ballcaps were becoming more prominent, but pink knitted hats were well represented too.

Somewhere just outside the barriers along Pennsylvania Avenue, a rowdy but peaceful group of hundreds of protesters walked by chanting. 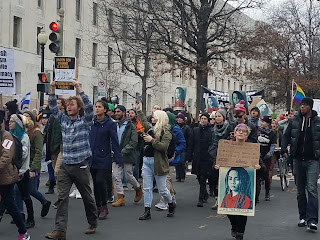 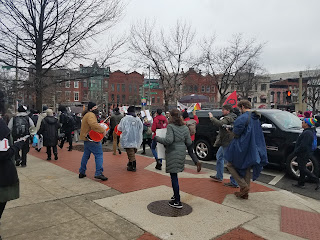 "...no fascist USA!"
One commuter stopped his car (and traffic behind him) to honk his horn in unison with the chants, shaking his fist in solidarity. I watched for a bit but decide to press on instead of joining them.

A half-hearted goal on Friday was to get close to the ANSWER Coalition protest inside the security barrier. This was the same group (as I recall) that organized the peaceful Dubyah Jr. protest 12 years ago, and they were the only protesting group this year to secure a permit within the barrier. They were expecting 20K people at their protest.

That said, a bigger goal was to avoid trouble at all costs, and I honestly had no idea what to expect. I'd heard about some antics and arrests that morning and expected tensions to rise as the day progressed. So I stayed around the fringes as I made my way toward the protest entrance, but I did thank the straggling protesters I ran across and walked with some of them for a few minutes in solidarity. 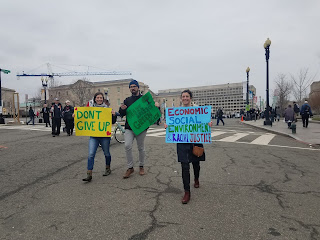 peaceful and to the point 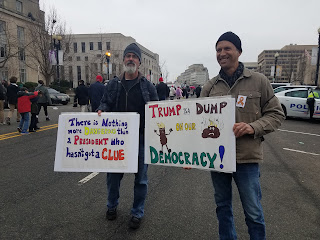 PA and FL representing
PA and FL were a hoot, so when they decided to wait at an earlier entrance to see if they would be allowed in, I waited with them. I changed my mind when a young man with a red ballcap politely asked PA why he was protesting, and PA put up his hand, said "I'm not talking to you," and turned his back. The young man frowned, shook his head, and walked away. "That wasn't very constructive, was it?" I asked, to which PA replied, "He's just a dumb kid. It's not worth my time."

"Wrong answer," I said, and turned to try to find the young man to offer to talk with him. He was already lost in the crowd. I said my goodbyes to PA and FL and kept meandering.

More and more peaceful pink knitted hats and peaceful protesters, and then I was at the right security entrance. The line was long and not moving. (I would later learn that security had redirected the protesters several times and eventually stopped letting them in altogether. This is what democracy looks like?) 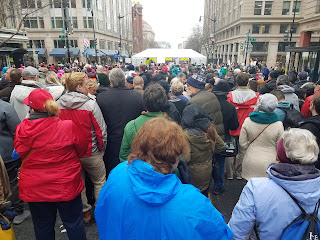 patiently waiting
I got in line a few times. I lasted a few minutes each time before a wave of nausea overcame me. I'm not kidding and I'm not overdramatizing - I would look around at the red ballcaps, and listen to their conversations and their mockery of the protesters ("the future is female? HA! no it's not!"), and I would feel like I had to throw up.

So every time I got in line, I got out of line five minutes later and wandered the crowd thanking the protesters. 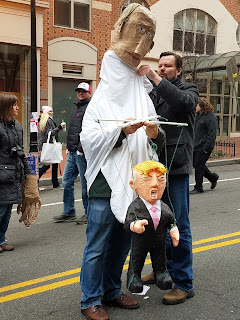 no, HE'S the puppet 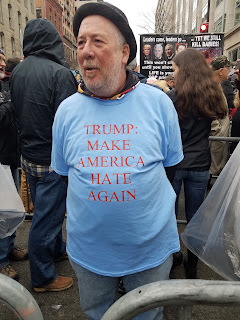 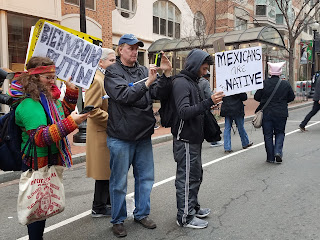 fact: this is not an alternative fact
Eventually I found a space where I could see the small ANSWER Coaliltion crowd, most of whose expected attendees were stuck outside. Speakers were bashing Obama, bashing Clinton, bashing middle America and that man's supporters. Perhaps at some point during their day there was positivity, but I didn't see any of that and I'm glad I wasn't able to join them. 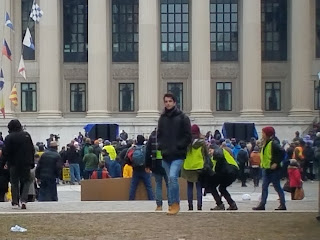 not quite 20K people
My energy faded in perfect timing with the estimated arrival of that man, and all I wanted was to be very far away, so I headed back to my friend's house, telling every pink knitted hat wearer I saw that I would see them tomorrow. They all smiled in response. 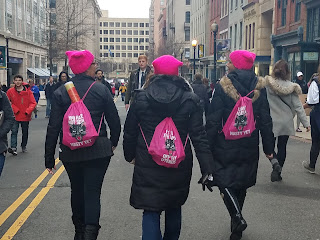 During Dubyah Jr.'s inauguration protest, I remember seeing snipers on the rooftops of buildings along our walk that day (the sight of which gave me chills so I kept my eyes ahead instead of up). I remember the bitter cold. I remember feeling disappointed, angry and sad, and feeling like I should have done more.

I don't remember feeling the fear that I feel today - and I don't remember ever crying or feeling physically nauseous about Dubyah Jr., which has happened more than I care to admit over the past two months.

But I also don't remember feeling the energy, the momentum, and the optimism from my like-minded fellow citizens as I do now, as that man's term begins. 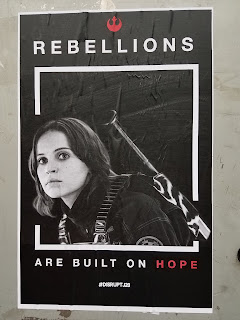 I'm with her
Onward, people. Onward.