Slowly Global vs the Avenue of the Giants... and some future pondering.

For the first time in about three months, we did nothing this past weekend. It was amazing.

"Living like a local" for an extended period of time finds us with jobs, which means that the concept of "weekends" has meaning again, and man, are they precious! These Saturdays and Sundays, when we're not working on house and yard maintenance (which, honestly, is neither super time-consuming nor physically taxing), we're involved in local politics, which finds us attending weekend meetings and rallies on a regular basis. There's also a pleasantly surprising amount of weekend entertainment in Coos Bay which finds us enjoying everything from geology talks at the local college to drag shows downtown. "Living like a local" has been kind of exhausting, actually.

Speaking of exhausting, "living like a local" in Coos Bay also found us joining our Where Is Your Toothbrush/The Salad Lobby friends, Peter and Lindsay, for the Avenue of the Giants half-marathon a few weekends ago. They had raved about it last year and we figured the training prep would be a good way to stay in shape over the miserable, rainy-sometimes-snowy, southern coast winter. So we signed up, and joined a gym, and ran ran ran.

All those evening and weekend training hours turned out to be completely worth it. The run itself was pretty surreal - gigantic beautiful trees, perfect weather, and downhill both ways (or so it seemed - an illusion from the tall trees, perhaps?). We all finished with good times and no injuries. 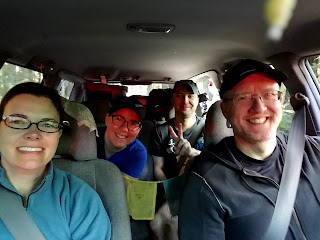 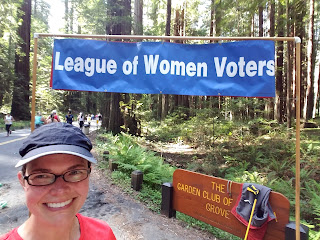 ran across some friends along the run 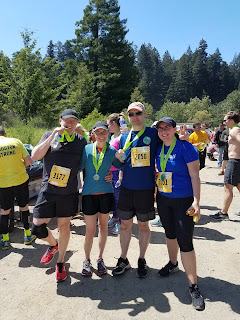 We camped in Myers Flat with our friends and some of their family who had driven up for the weekend. The campground was right next to the South Fork Eel River, and other than a pretty wicked wind each evening (and that kid riding his bike in circles playing awful country music on his portable radio), it was quite pleasant. 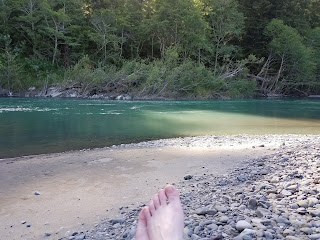 This was SG's first camping trip of the season. We're sad to report that we forgot to take pictures of the campsite, but we're happy to report that our tent, heretofore named Old Reliable, held up against the wind (and awful country music)... We're still buying a new tent someday, though - thanks, REI dividend!

Anyway. Monday morning, we broke camp and took the slow route home, first driving the Avenue that we'd run the day before and stopping for a few short walks. 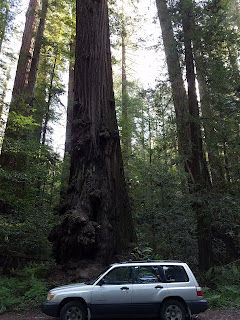 another one for the "Subaru ad" file 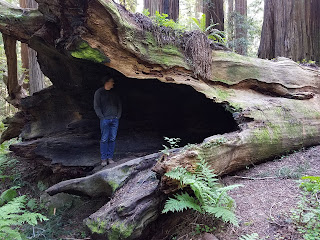 someone, somewhere, definitely heard this 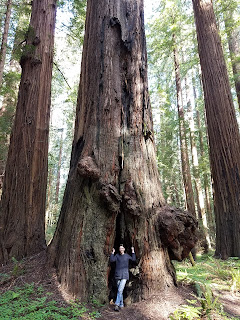 tree hugging me
or me hugging tree? 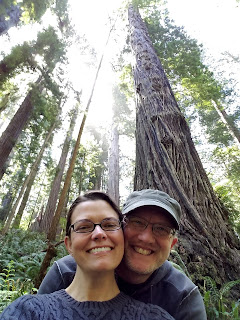 We also took the scenic route through Prairie Creek Redwoods State Park, which was well worth the detour, and spent an hour or so trying to find the Myrtle Creek Botanic Area just north of Crescent City (hint: if the park rangers at the info station haven't heard of it, maybe just keep going). 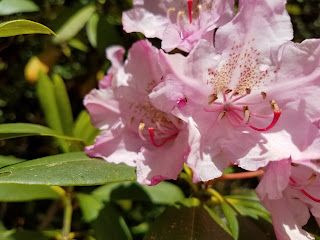 not the trail
(but turned out, we were sooooooooo close)

One last stop at Chetco Brewing Company for a taster flight, snack, and beer trivia... 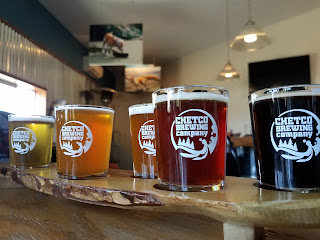 Willa Nelson IPA for the win

But that was two weekends ago. This past weekend? Nada. No meetings, no rallies, no entertainment, and best of all - no long runs. We got some things done, mind you, but other than a few quick errands and a short run, we didn't leave the house. It was lovely.

We are here for a while yet, in part because our housesit hosts have a bit of wanderlust inspiration themselves and they are still figuring out their plan for returning to the area. And in part because we are (mostly) enjoying our jobs and (definitely) enjoying the bank account replenishment.

But talk has begun. Research has initiated. Ideas are being mentally filed away. Things are being assessed for long-term viability (in other words, does it fit in the car?). The jar has been counted and set aside for a planned purchase, and will be replenished according to the original methodology.

We're nowhere near a plan, and we don't expect to have one anytime soon. We want to be certain that we're running toward something. (But that's a much longer post that would be better shared over a beer someday. Come visit!)

For now, photosynthesis certainly ain't the plan, but we'll enjoy the post-yard-work happy hours in the sun while we have them. 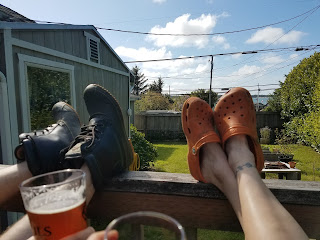 cheers!
Posted by Slowly Global
Email ThisBlogThis!Share to TwitterShare to FacebookShare to Pinterest
Labels: camping, living like a local, the plan