For the foodies - Portland eats!

Before we fill you in on the week we spent camping around Eastern/Central Oregon or our current housesit in Corvallis, we have to get the obligatory Portland food post out of the way, right? Right!

Now, with a FUNemployed budget and a bountiful backyard garden, we dined at "home" at lot. 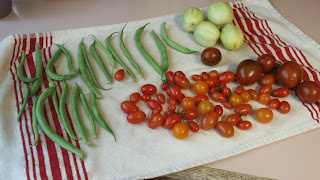 one late summer morning's harvest -
plenty for salad for two 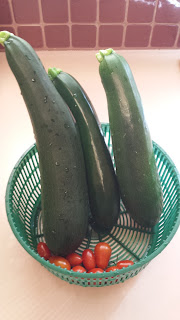 no! more! zucchini bread!
(haha, kidding, didn't make it once all summer) 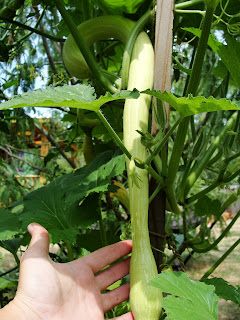 But we managed to get out a bit too... It's Portland, home to some of the best food in the country - how could we not?

Starting with breakfast, also known as the Portland pasttime. We enjoyed two meals with friends at Batter, Griddle & Drinkery, one at everyone's NE favorite Tin Shed, and pretty good coffees from Extracto Coffee Roasters. All were dangerously close to our housesit and none disappointed... 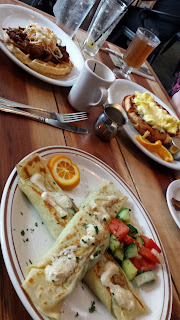 Shortly before we left town, we had brunch at Veritable Quandary for a friend's birthday. We used to work near VQ which meant occasional (un)happy hours alongside our (un)happy coworkers, so brunch with friends was a great way to reverse our not-so-happy memories of this downtown Portland institution. It was also nice to eat in the outdoor garden area before the courthouse takes over the view. 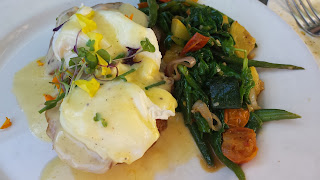 
Next up: lunch. Our first social outing was at our old favorite, Yuki Japanese Restaurant in NE, where we spent way too much time and money back when we lived in Portland. Sadly, we only went once but the crispy tuna wrap was just as tasty as ever. 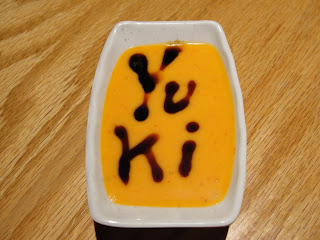 We had burritos from Laughing Planet for lunch one day, and again for take-away dinner after an evening documentary in NW. Plain, simple, wholesome, hearty... And pretty affordable too. 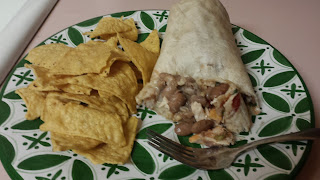 
One cold, overcast afternoon we were craving comfort food so we stopped by MeKha Noodle Bar & Cafe. The pho and bun cha gio were tasty, but not like we remembered from our time in Vietnam. Alas.

No stay in Portland would be complete without a visit or two to the food pods, so one day while I was downtown running errands I stopped by SW 3rd & Washington's D.C. Vegetarian for their "chicken" salad sandwich (which I had to bring back to the NE after suffering a mild panic attack being so close to our former place of employment - seriously, it was weird). And one day we had lunch over at The Ocean's Slowburger/Uno Maz with friends. Neither really wowed us; our friends' lunches from 24th and Meatballs looked pretty tasty though, and more fun to order too.

Our last lunch stop was on our way out of town when we grabbed two made-while-you-shop deli sandwiches from Sheridan Fruit Company. So, so good.

We had lots of free afternoons for happy hours around town. (As an aside, exploring the food scene during the lunch hour and happy hour spared us from long waits, noisy crowds, and spending heaps of money. It's a great method to employ when you're traveling in any expensive city.)

First up was Hawthorne Fish House, our go-to before we left because of their rice-flour batter (I was GF at the time), their deep-fried cheese curds, and their amazing crab pepper cheese soup. 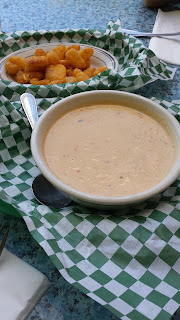 
We met some fellow traveler friends at Green Dragon for beers - this place may have ditched Hawaiian-shirt-Tuesday-free-pints, but it's still always a good time. 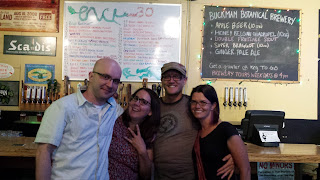 twelve sheets to the wind

In Sellwood one afternoon, we stopped by Laurelwood Brewing Company for a beer and some people-watching. (Oh, and tots!) 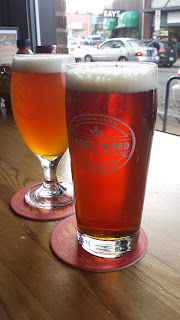 Red Elephant on the left,
Warhorse on the right

Patrick helped HUB harvest hops one day and got free pints of that particular brew as a "thank you." We only made it to Hopworks Bikebar once to cash in on this, but his beer was awesome and so was my grapefruit (lager? belgian?). 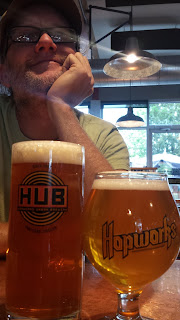 enjoying the fruits of his labor

Just a few steps away from Bikebar is Las Primas, boasting traditional Peruvian cuisine. I'm always dubious about "authentic" food from places I've traveled because the US version always disappoints (or at least isn't the same - see MeKah above). But we were hungry, and we had a BOGO empanada coupon, so we tried a few and a glass of chicha morada... 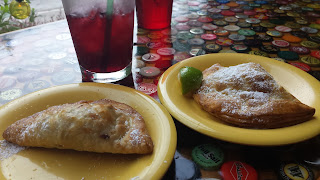 Las Primas for the win! We liked the food and ambiance so much that we took my Peru travel buddy and her partner back when they were in town. 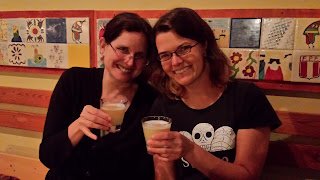 pisco sours all around!

There were also a few afternoon Spielman's Bagels and we finally made it over to the annual Greek Festival where we sampled sausage (gone too fast to photograph) and some wonderful baklava. 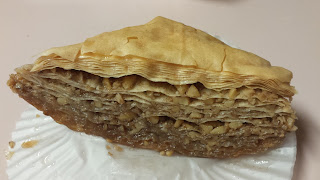 Dinner usually revolved around feeding and walking the dogs so we didn't get out too often. When we did, we often regretted the money sink - like that evening we went to Pok Pok Noi hoping for a familiar delicious plate of Thai food. Most of the menu items didn't really appeal to us (or look familiar, either). Almost $30, a tiny bit of food, and a tiny shot of nostalgic rice whiskey later, we left pretty disappointed. 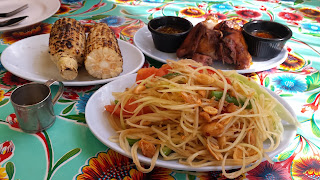 sadly, only the papaya salad was worth it


Thanks to the Chinook Book, we gave Tapalaya another try... and decided not to do that ever again. The food was fine but nothing remarkable or memorable, and when that happens I'd rather just cook at home.

But our Chinook Book Cha Cha Cha (Fremont) coupon was worth its weight in gold - not only did we enjoy a delicious meal and excellent service, we also sent Patrick's nephew off to his South African internship with a belly full of delicious Mexican food he's not likely to enjoy for the foreseeable future. 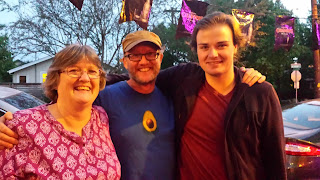 By 9pm we were usually in our PJs but we did venture out a few times for late night fare... Like the night we walked over to Hot Lips Pizza after our disappointing snacks at Pok Pok Noi. 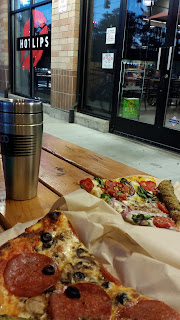 Mixed feelings about Hot Lips. We ate a lot of free pizza back in our cube days, and it's definitely the best free pizza around. But to pay for it... eh.

One night we took some visiting friends to see the bathroom and enjoy the ice cream at Rimsky-Korsakoffee House. Of course.

And with one night left and a Chinook book BOGO coupon, of course we had to hit up Salt & Straw just up the street from our housesit. Amazing that it took us three whole months given how close it was! 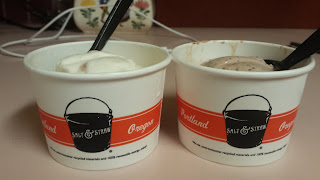 A few regrets - no fried chicken from Screen Door, no pie from Apizza Scholls, no pint of Fred from Hair of the Dog. Next time...

This post is not sponsored by anything except our taste buds, and maybe the Chinook Book (which we were gifted from a friend, which is why we visited many of these places), and definitely our friends who funded a lot of our meals, for which we are eternally grateful - we ended up shelling out just $275 for three months of dining out in Portland.

What's the one food spot in Portland you wouldn't miss if you were only around for the summer? (I know, I know, it's like asking a long-term traveler what their favorite country was, right? Right!)
Posted by Jen
Email ThisBlogThis!Share to TwitterShare to FacebookShare to Pinterest
Labels: explOregon, housesitting, living like a local, pacific northwest, united states