We've talked about how it feels to "be back" and we've answered some other FAQs. Now it's time for the questions we've only been asked once or twice, but we've really enjoyed answering... (We did mention that we'll be injecting travel talk into every conversation for the foreseeable future, whether you want to hear it or not, didn't we?)

1. What was your happiest moment? We both agree that there are many! Using a general gauge of # of photos taken and/or smiles remembered per place, the following moments rank pretty highly: hanging out with Nubian goat kids in Quebec, our Cares Gorge hike in Spain, building a Habitat for Humanity house in Cambodia, the night dive with manta rays in Hawaii, and of course hitting Day 365 in Vietnam and realizing we were only halfway through our one-year travel fund. 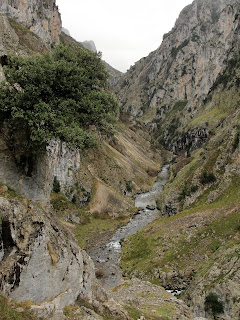 I'd also have to say that after 20 years of dreaming with absolutely no expectation of it actually happening, the day in September 2013 when I finally crossed Krakow off the list made me pretty darned happy. 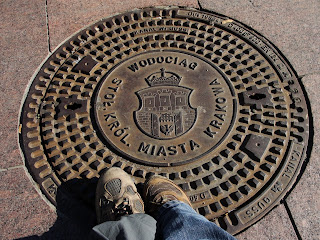 2. What was your proudest moment? I thought it was interesting that we both named physical achievements when answering this question. Patrick says his proudest moment was the first time we dove together on Koh Tao... 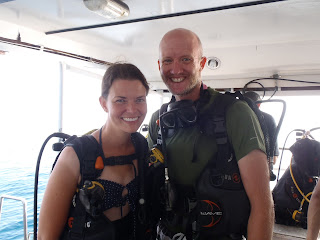 awesome tan lines brought to you by SE Asia

And I'd agree that one of my proudest moments is getting my diving certification. Patrick, being a man of few words, summed it up nicely above. Good for him. Now please allow me to expound on this a bit.

Getting this dive certification took a lot of swimming, a lot of carrying around really heavy equipment, and a lot of bouncing and sliding around dive boats in choppy water. But I survived, physically.

Mentally it was a whole other story. Yes, I have done crazy things like river raft in class 5 rapids, jump out of airplanes, swing 250 meters over canyons, and climb mountains. I'm not claustrophobic but the mere idea of being 18 or 30 meters underwater for an extended period of time Freaked. Me. Out. The dive shop wasn't the most professional (equipment didn't fit or seemed to keep breaking and the instructors were all ADD twenty-somethings), which didn't help with my unease...

But I did it, and those last two dives with Patrick were magical. Sorry to be cliché, but they really were.

My other proudest physical achievement was reaching the top of Thorong La Pass on the Annapurna Circuit. The night before we summited the pass, Patrick was loving the adrenaline rush while I was having some sort of bizarre freak out. We attempted an early sleep for our 5am wake up but all I could do was "what if" and try not to cry. "What if we have a heart attack, how will they get us off this mountain?" "What if our lack of sleep causes us to fall off a mile high cliff?" "What if we are hit with hypothermia or frostbite?"

We didn't have heart attacks. We didn't fall off cliffs. We were plenty warm the whole time (even while it was snowing that morning at 5am). We climbed to the pass without issue and took celebratory photos. 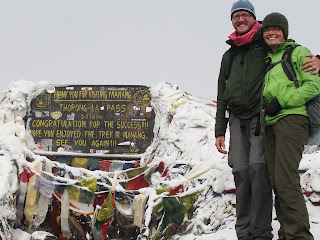 There are volunteer moments that we're really proud of too - but those were more about giving back than patting ourselves on the backs.

3. What was your biggest insight? This one we definitely agree on - we now have a much better understanding of how the rest of the world lives. Everything from what people eat on a daily basis to what they prioritize, how their politics work, how they build their homes... Details vary greatly but in general, there are more similarities worldwide to life in the US than you'd probably imagine.

We also learned a lot about how the rest of the world views America. Almost everyone with whom we talked politics was thrilled that Obama got two terms, and some folks were a bit concerned about the 2016 elections. (Just the other day we were talking about how happy we were to be back in the US when Trump announced his presidency. If we were still overseas we'd be hiding our heads in shame even more than we're doing now.)

And no one we spoke to outside of the US understands why Americans love their guns so much. Then again, neither do we. Many of these conversations happened in Canada and Australia, but we also happened to be in Phnom Penh at the time of the Ferguson shooting and ensuing riots. The Khmer hotel staff seemed quite fascinated with this story playing on the lobby's TV - this happens in America, land of the free and home of the brave? - and the story was in heavy rotation in world media (which typically covered US news far less than any other country's news).

We followed BBC news and other world news web sites before our trip and we continue to follow them now. We encourage everyone to do the same - US news is entirely too insular and does nothing but fear-monger and dramatize.

4. Did you make a lot of friends in your travels? Yes! But very few of these friends were travelers we met along our route. Sure, once in a while we hit it off with someone well enough to share a meal, but most of our fellow travelers were half our age and we really couldn't relate to them. (Or they were people we met online who we wouldn't actually "meet" until we got back to Portland.)

Most of the friends we made along our journey were the farmers and their families who welcomed us into their homes and taught us so much about their daily life, their challenges and successes along the way, and what they loved (and didn't love so much) about their country as well as ours. We also made some great WWOOF friends, half our age but very wise for their years. These are most definitely "our people" and we are so happy to have shared 10+ days with them, and to still keep in touch with them today.

5. What surprised you the most? We really had to think about this one. Patrick says his most surprising moment was when our Thai hilltribe village host pulled an eel out of the rice paddy and said, "Breakfast!" I think my most surprising moment overseas was landing in Perth, Australia after being in SE Asia and Nepal for seven months. The Western culture shock and extreme excess kind of blew me away. We were also pretty surprised at the poverty in Portugal - we had this image of a lush, exotic, thriving Western European country... not exactly.

These days, we're surprised at how long ago this whole trip feels, and how easy it is to forget that we actually rode camels in Morocco and went to the coffee capital of Vietnam and bottle-fed joeys in Australia...

So keep asking questions - it helps us to remember. We'll keep talking travel whether you like it or not, so you might as well help direct the conversation!
Posted by Jen
Email ThisBlogThis!Share to TwitterShare to FacebookShare to Pinterest
Labels: FAQs, Friday five, life on the road