Of all the questions we've been asked since we arrived in Portland, the subject of this post is probably the most common. It's also the most difficult to answer.


The quick, accessible reply is that it's weird. (Irony of ironies that it's "weird" to be back in the Weird Capital of the US... but it's true.)
Portland has changed a lot over the past few years. We're not about to complain that dozens of new breweries, distilleries and food carts have popped up around the city. But rents have skyrocketed, gentrification is rampant, and dear lord - all the condos, all the traffic, all the people! Where are they all going at 10:30am on a Tuesday, anyway? (Non-Portland people, click here to find out whether you should move to Portland.)

To be fair, we've changed a lot more than Portland over the past few years. We still appreciate the city's commitment to green, the DIY attitude toward just about everything, the ease of finding delicious local food, the abundance of music and culture (and so much of it free!), the glorious Multnomah County Library system... 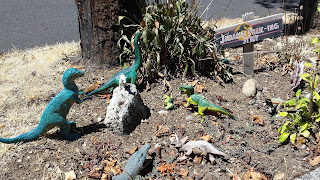 ... and yes, the weird
But our tolerance for crowds, noise and traffic is much lower than it was in April 2013. Patrick's tolerance for inconsiderate bikers, my tolerance for snark and sarcasm, and our collective tolerance for "weird for the sake of being weird" have also all taken a nosedive. We still don't enjoy Portlandia - but we understand it a lot more now than we did two years ago.

We loved this city when we left and there are definitely elements of it that we still love, but we're not exactly sure Portland is for us anymore - which is great to know, that's the whole reason we parked here for the summer.

Unfortunately, we don't know where to go from here. So "lost" would be another really good answer to the question. (It's also ironic that of the 17 countries and countless cities we visited, the city we called home for over 5 years is officially the only place we've actually felt lost.)

You know how, when you go back to work after a 2-3 week vacation, it takes you an hour or two to really get back into the swing of things? Well, imagine if that 2-3 weeks were 2-3 years instead. For the last five weeks we have spent many hours wondering where we were, who we are, what we're doing, what we should be doing, and whether that whole 26-month jaunt around the world actually happened. 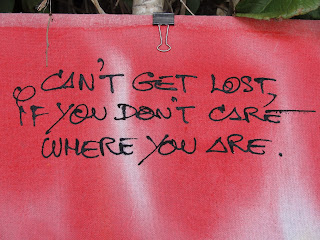 another perspective
(Chiang Mai, Thailand)
And honestly? Here's how it feels to be back: lonely. In a city of 600K people including many of our friends, we feel lonely. (Is that ironic or Alanis-ironic? I'm not sure.)

I was exchanging emails with a traveling friend a while back; she'd just returned to Portland after 15 months abroad and I had asked her about re-acclimation. She replied, "People ask 'where was your favorite place you visited?' And I say Myanmar and then we move on to talking about their cat or whatever."

I laughed at her description at the time. Now that we have lived this exact scenario dozens of times between Maryland and Portland, it's not so funny. Friends and family ask questions about our trip but often can't relate to our answers about countries they've not visited and experiences they've not had. Totally understandable. So they ask "what's next?" and as we start to describe our non-9-5 future options, their eyes start to wander. Also understandable. We ask what's going on with them; we can't really relate to their 9-5 lifestyle and our eyes wander. Eventually we all talk about the weather, because hasn't it been insanely hot in Portland this summer?

On the other hand, there have been many conversations where no questions are asked... That makes me feel even more weird, lost and lonely. We did really just jaunt around the world for 26 months, right?

There are definite exceptions to these scenarios. We've had great conversations about our trip and our future since returning to the mainland, and those have left us energized and excited about whatever is to come. 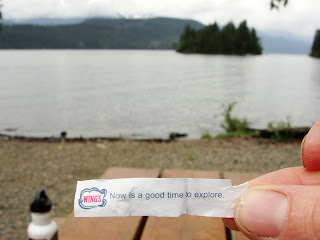 indeed
(Sasquatch Provincial Park, British Columbia)
Just to be clear: this is not a "no one understands!" whiny post - at least that's not my intent. All this doesn't mean that we haven't enjoyed catching up with friends and family while we've been Stateside. It's been fun to see familiar faces in familiar territory, catch up on life news and work gossip, and meet new family additions.

We're just in a different mental place right now. We've been through this with friends who had babies or found religion or whatever, so we get it and we appreciate everyone's patience as we desperately try to inject travel stories into every conversation. We have also been very fortunate to connect with new faces here in Portland with whom we can share travel stories and farm talk. 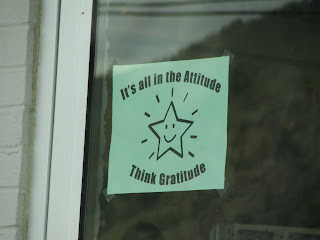 
Many travel bloggers have written about the challenges of re-acclimation after an extended trip, and they've said it much better than I ever will. Their posts are comforting and help with the weird, lost, lonely feelings. (Seeing these bloggers in person and commiserating over beers helps immensely!)

I asked Patrick to read a draft of this last night; I'd only gotten as far as that last sentence. He commented that he wasn't sure about the conclusion. I thought that was a pretty appropriate summary of the whole topic...

Maybe this is the real answer: we're not "back" and we don't know "what's next." All we know with 95% certainty is that we're in Oregon through mid-November. This is exciting... and challenging... and scary as hell.

Isn't that how life should be? 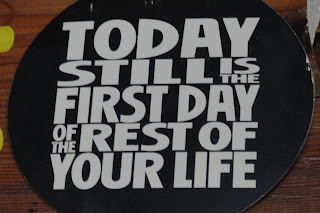