We really wanted to relocate a camper from Perth to Adelaide (did you know this is a thing? you can relocate campers and RVs for just a few dollars a day plus the cost of gas? check it out!).

However. Every time we mentioned this idea, people stared at us in horror. "Are you sure that's a good idea?" "It's the most boring drive in the world!" "All you see is green, then brown, then green, then brown, then lots more brown!" "I don't care if you loved driving across the plains and prairies of Canada - this is no drive across the plains and prairies of Canada!" "Umm...have you seen Wolf Creek?"

Granted, the outback is vast and parched, particularly on this stretch of road, and petrol stations and supermarkets are few and far between. If anything went wrong we'd be without mobile phones and would likely be stranded for hours. Oh, and there was that pesky detail about Patrick's drivers license expiring last June...

So we ditched the relo idea and splurged on the Rail Explorer Pass from Great Southern Rail. For just $495 each, we got unlimited travel on The Ghan, Indian Pacific and The Overland for two months - perfect for our timeframe and the places we wanted to visit. Trains only run once or twice a week and two of the three legs take about three days, but we were in no hurry so that was cool. The pass is only valid for the "Red Service" seats, not the sleeper cars, but that was cool too. After 18 months on the road we were used to sleeping in all sorts of conditions. Nothing could be worse than the overnight bus trip from Sapa to Hanoi.

Best of all? This particular pass is only available to foreigners. Purchasing individual tickets for each leg would've cost us almost $3000! Even airline flights would've cost more than the pass, and we would've had to plan much farther in advance if we'd traveled by plane. Sorry, Australian friends, but for once the tourist tax worked in our favor. 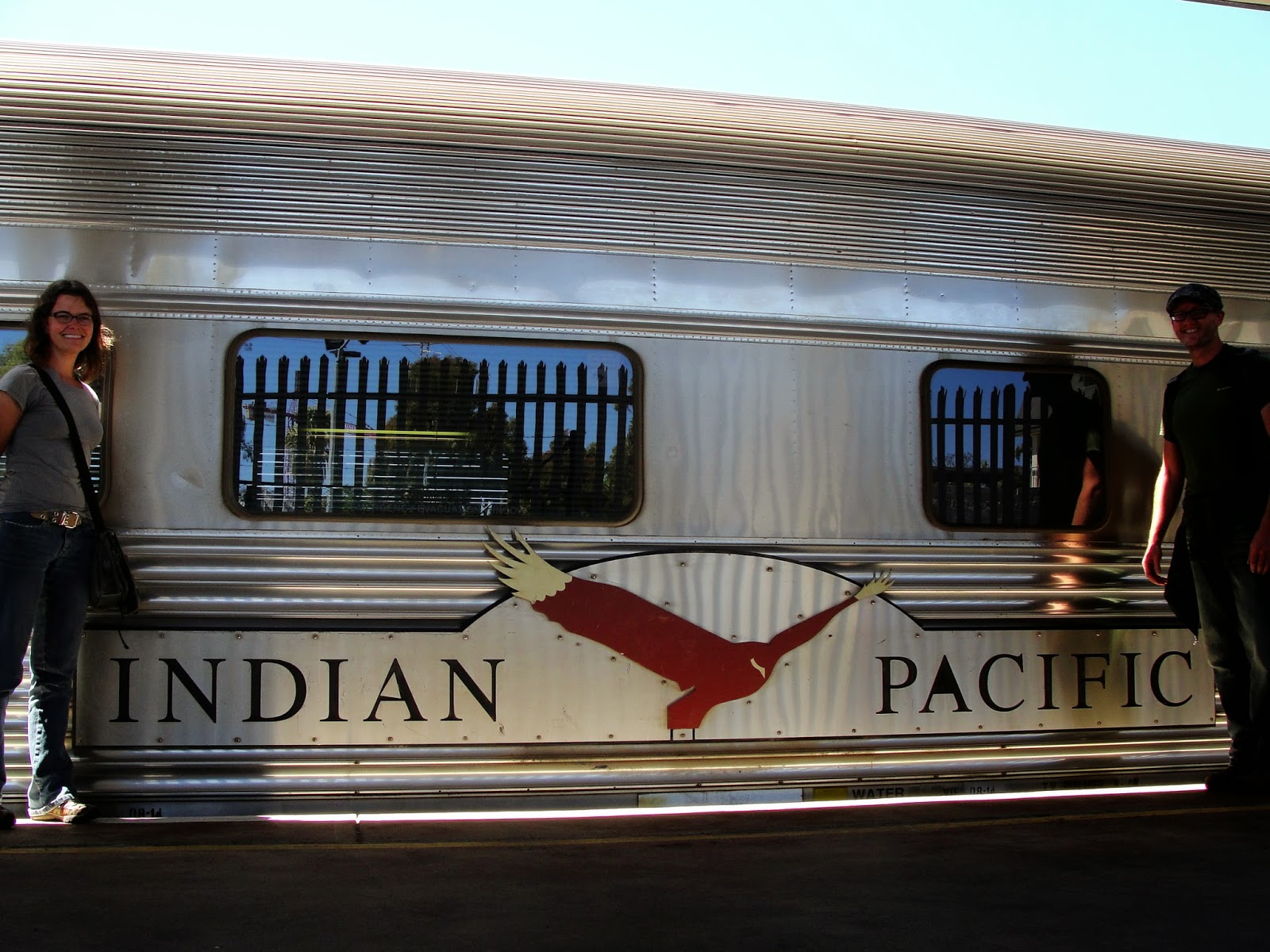 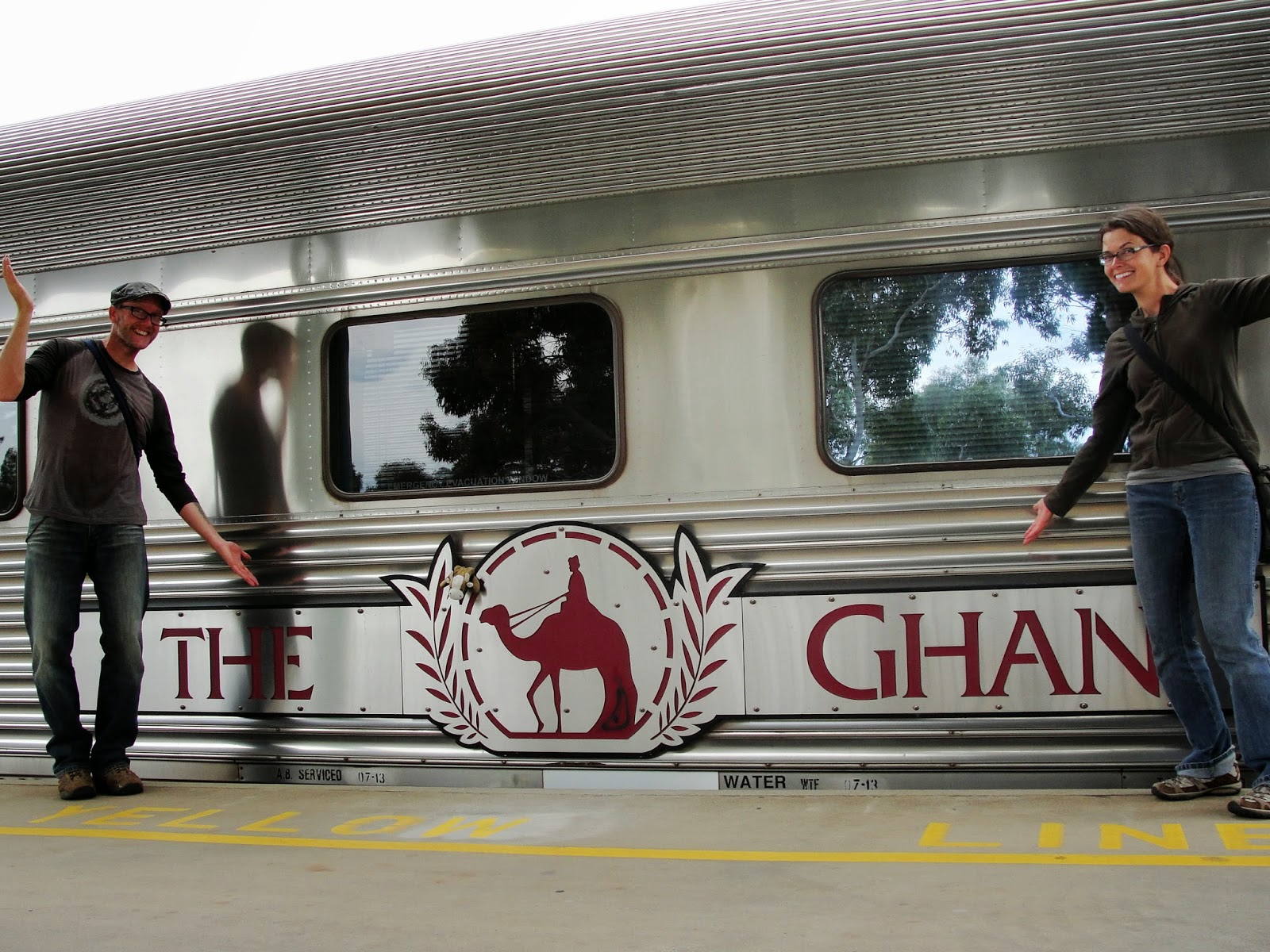 Adelaide to Darwin and back 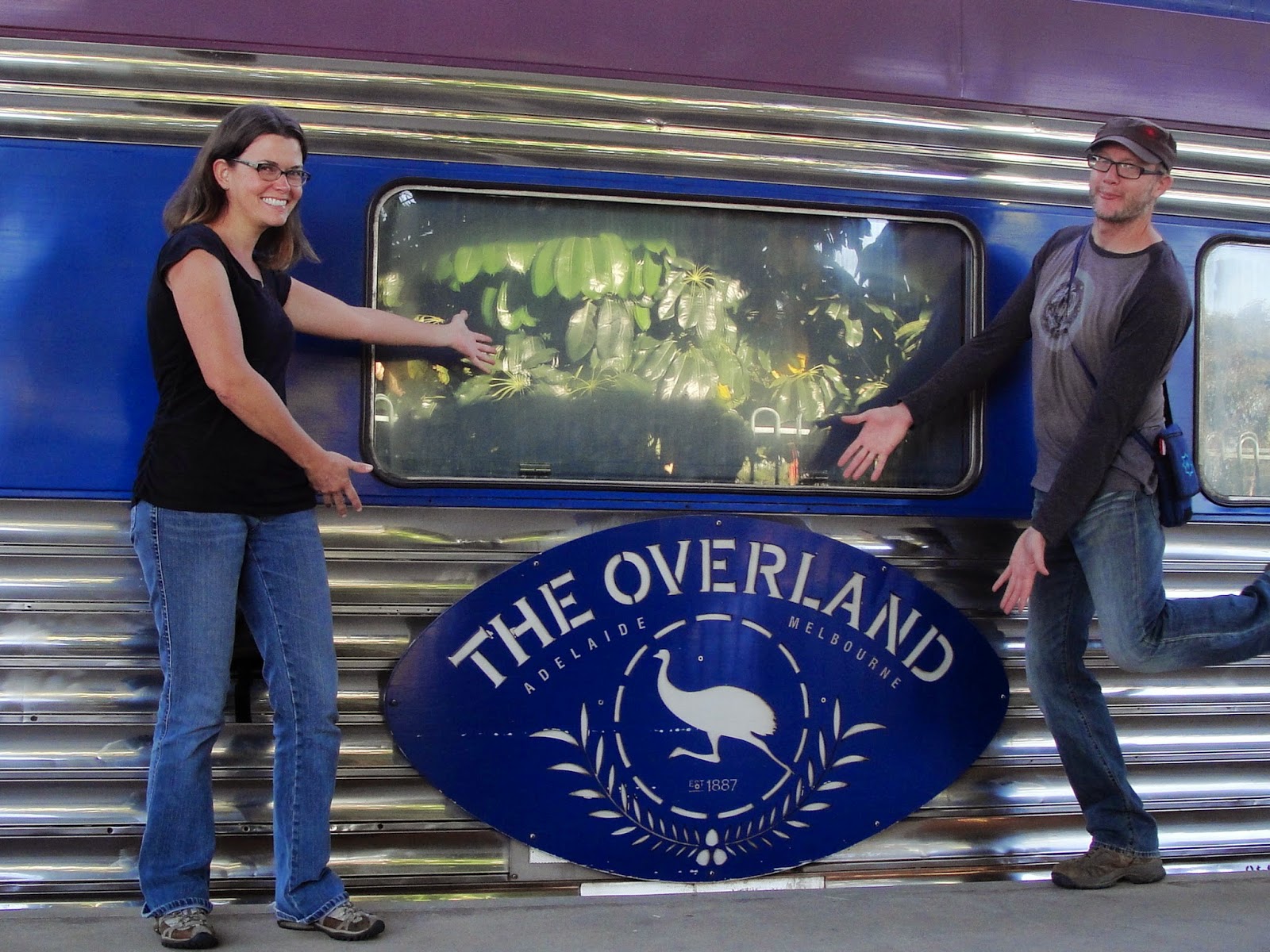 The Red Service car was fairly comfortable. The car has a few showers and the train staff provide towels, which was a nice perk. We brought our own food and purchased hot water for our instant coffee and tea from the cafe (we weren't supposed to bring our own alcohol - um, riiiiiiiiiight). 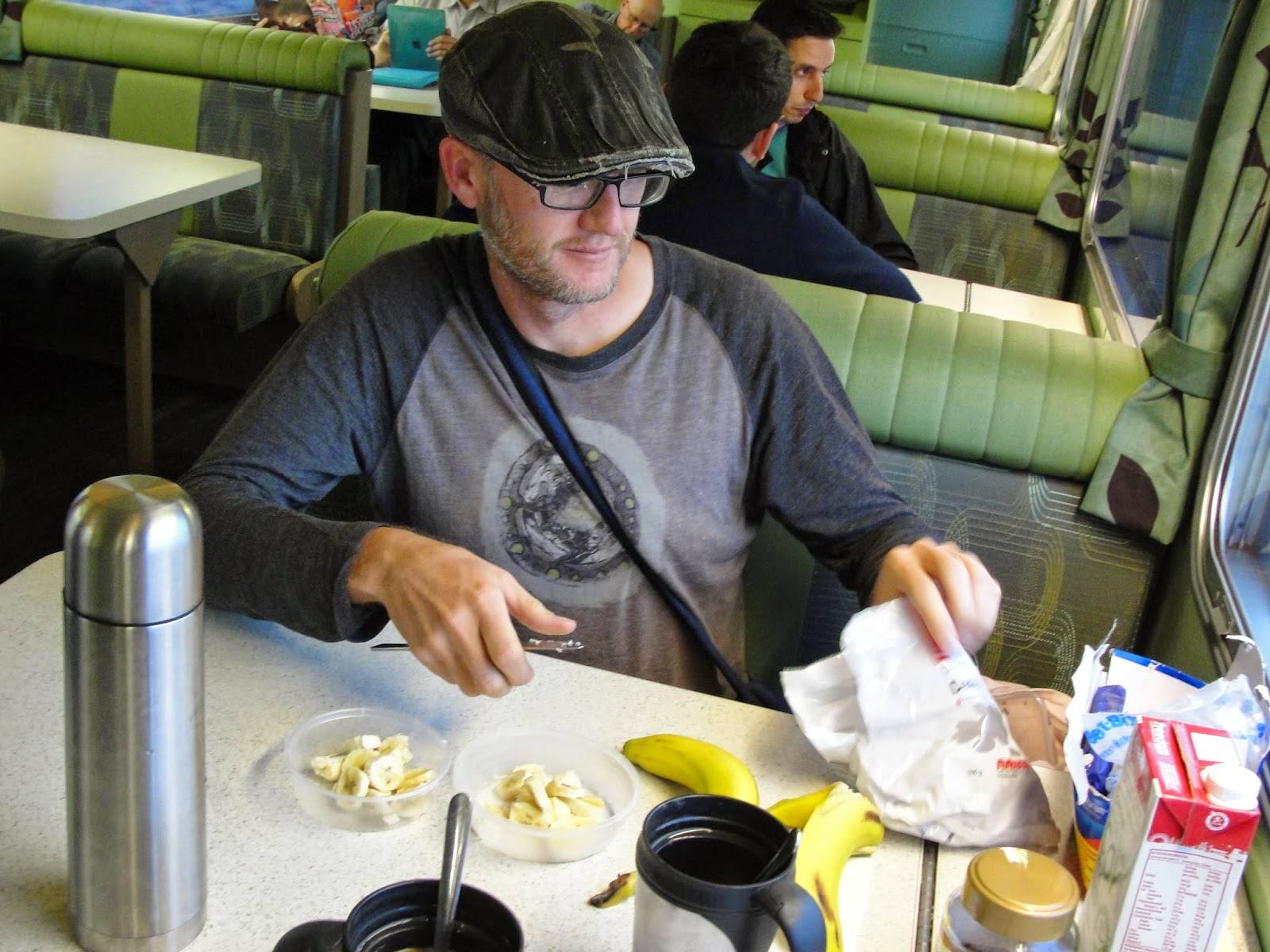 homemade breakfast in the cafe 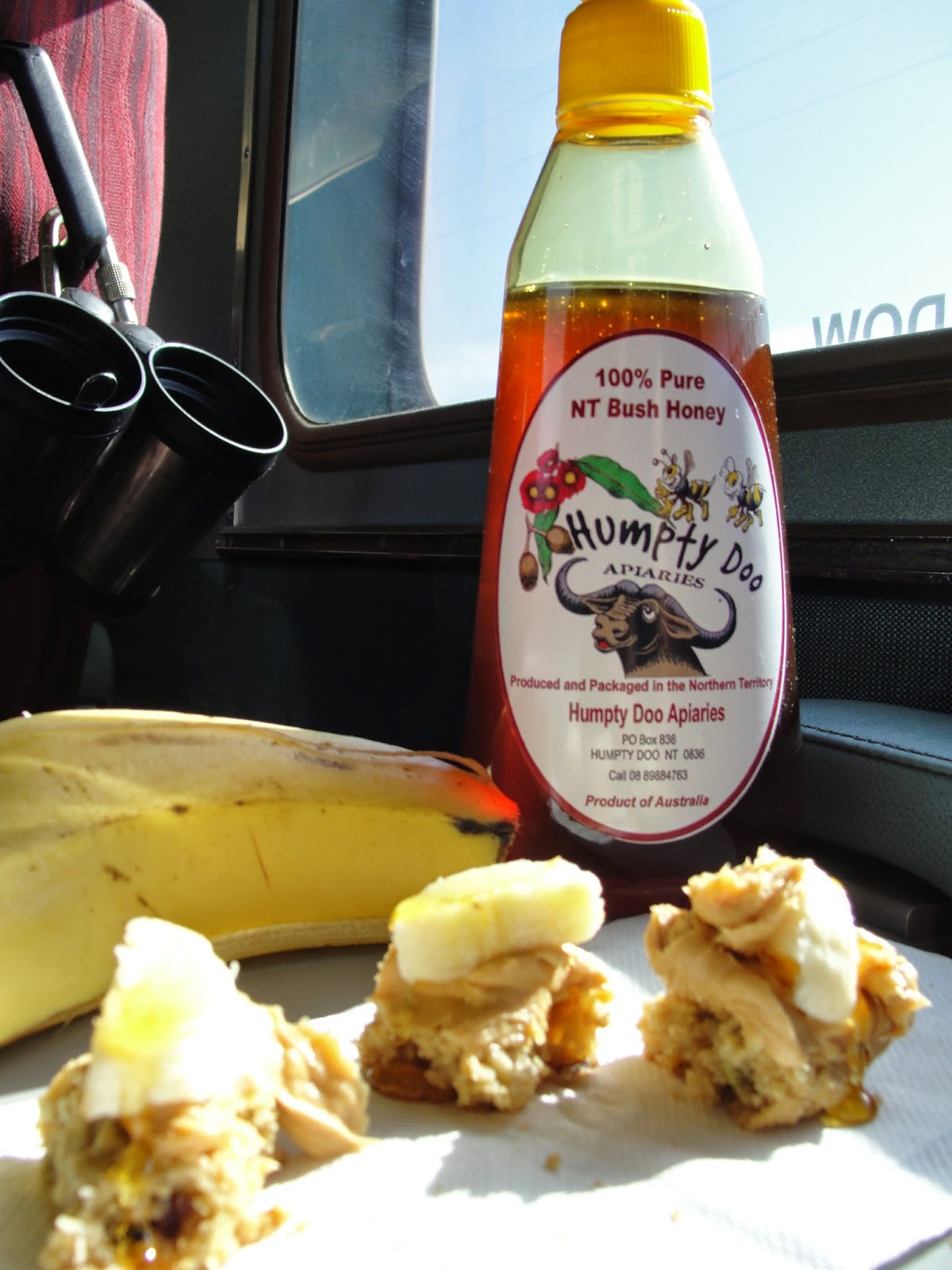 best train snack ever:
cookies with banana, peanut butter and honey from Darwin 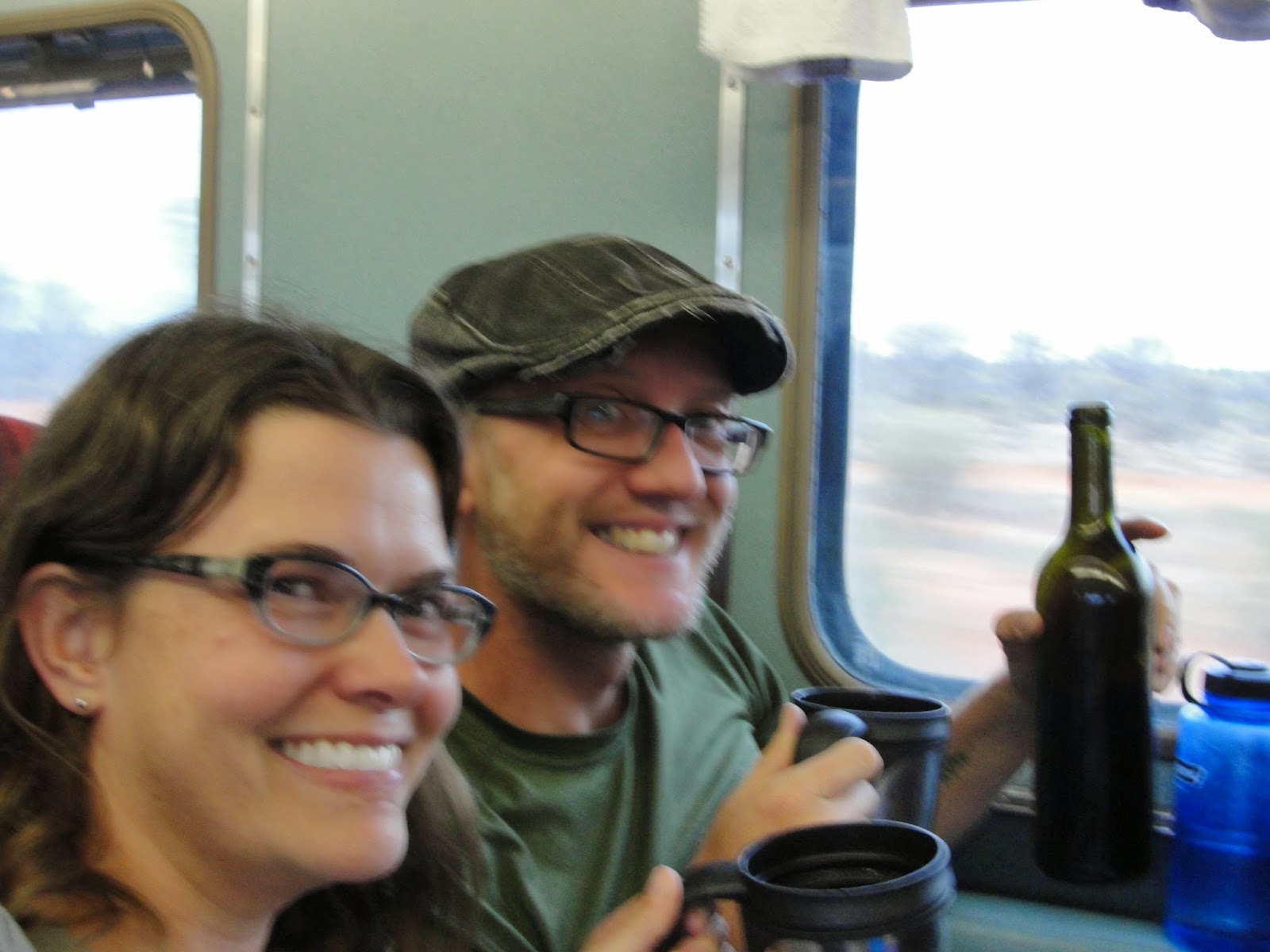 no outside alcohol... riiiiiiight

Whenever we passed anything historic or photo-worthy, the train manager would make an announcement and give us a little background on what we were seeing. Sometimes they even had audio programs that gave a lot more context. 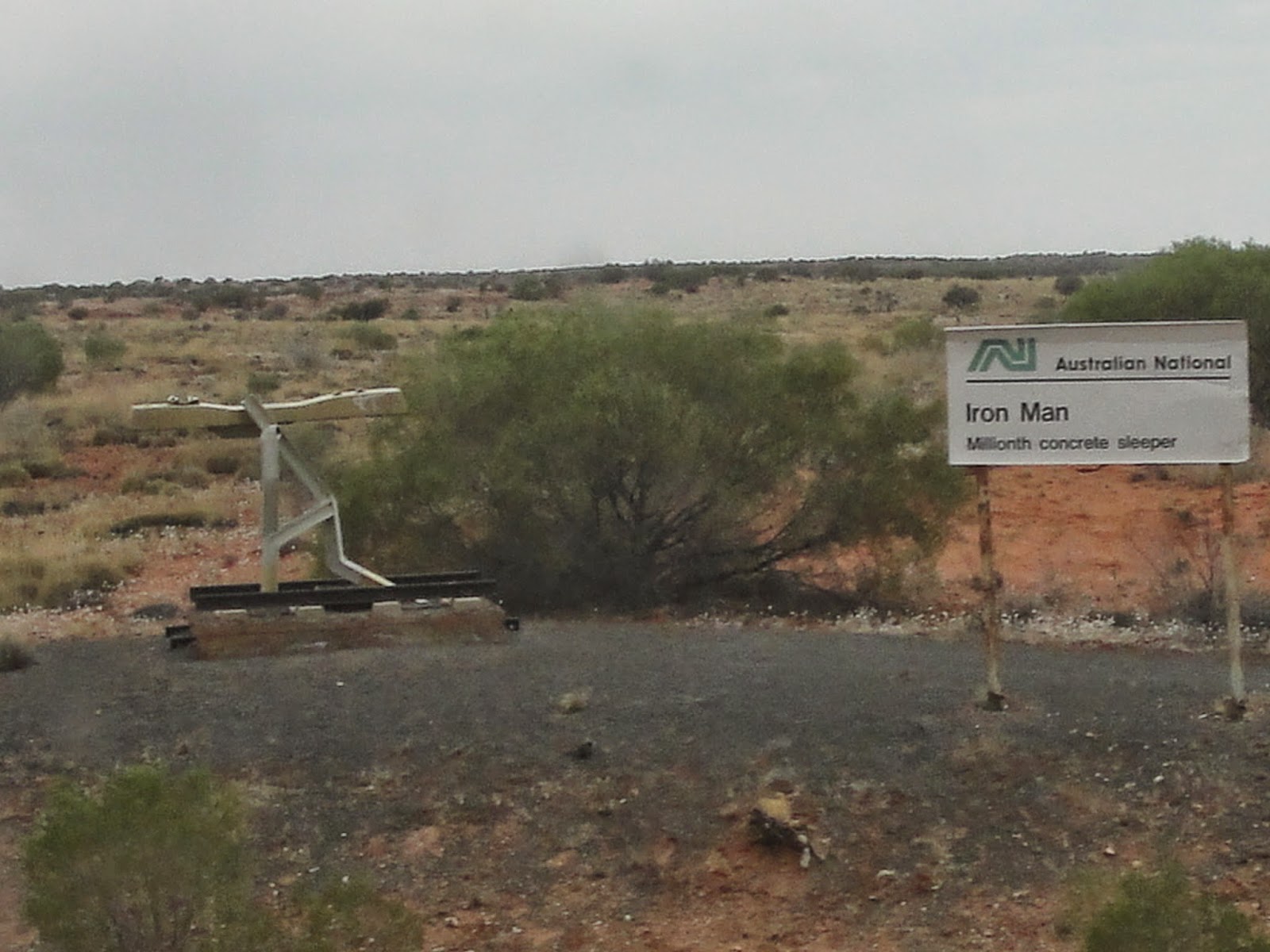 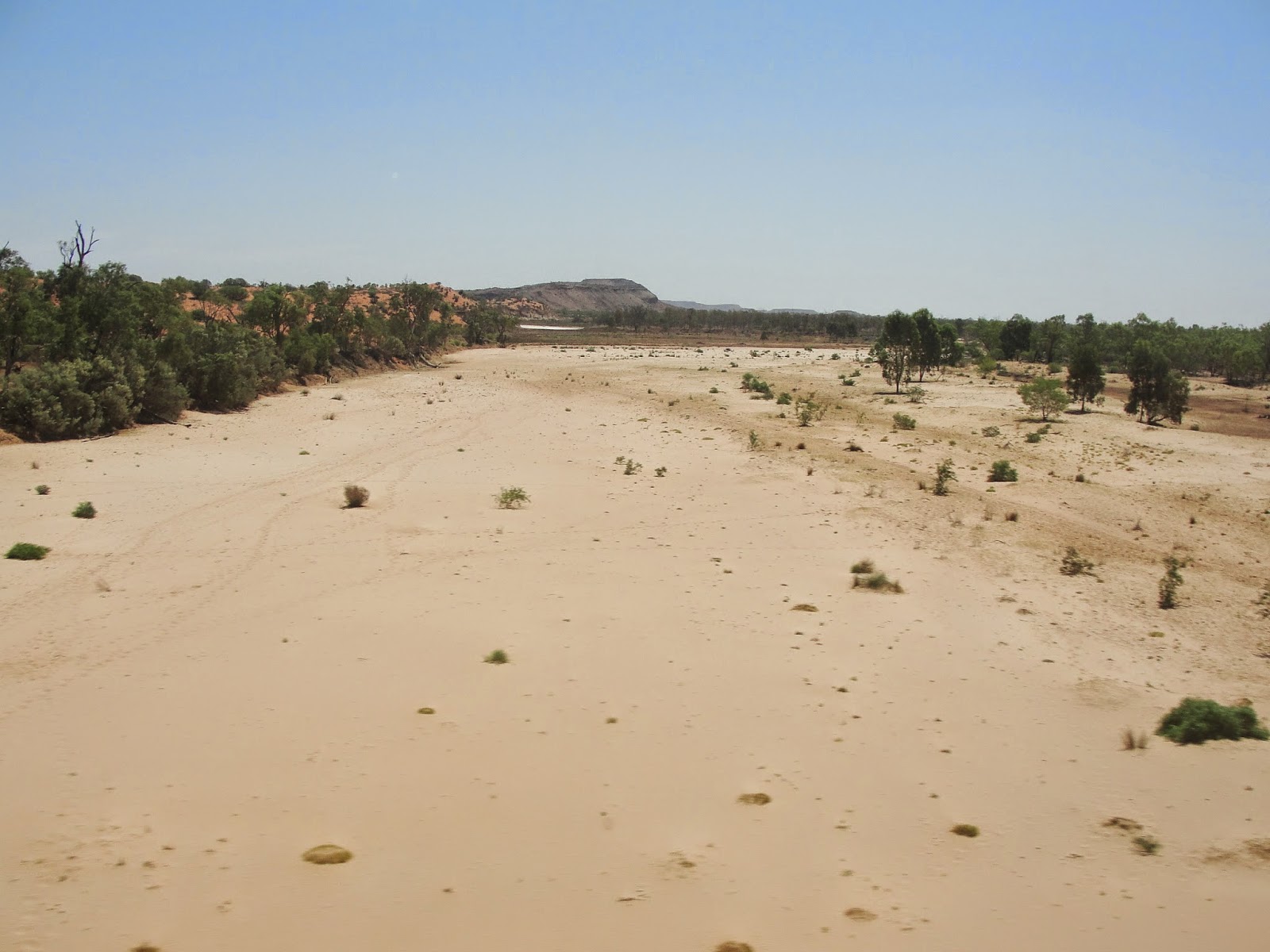 the Finke River, wide and usually dry,
thought to be one of the oldest rivers in the world 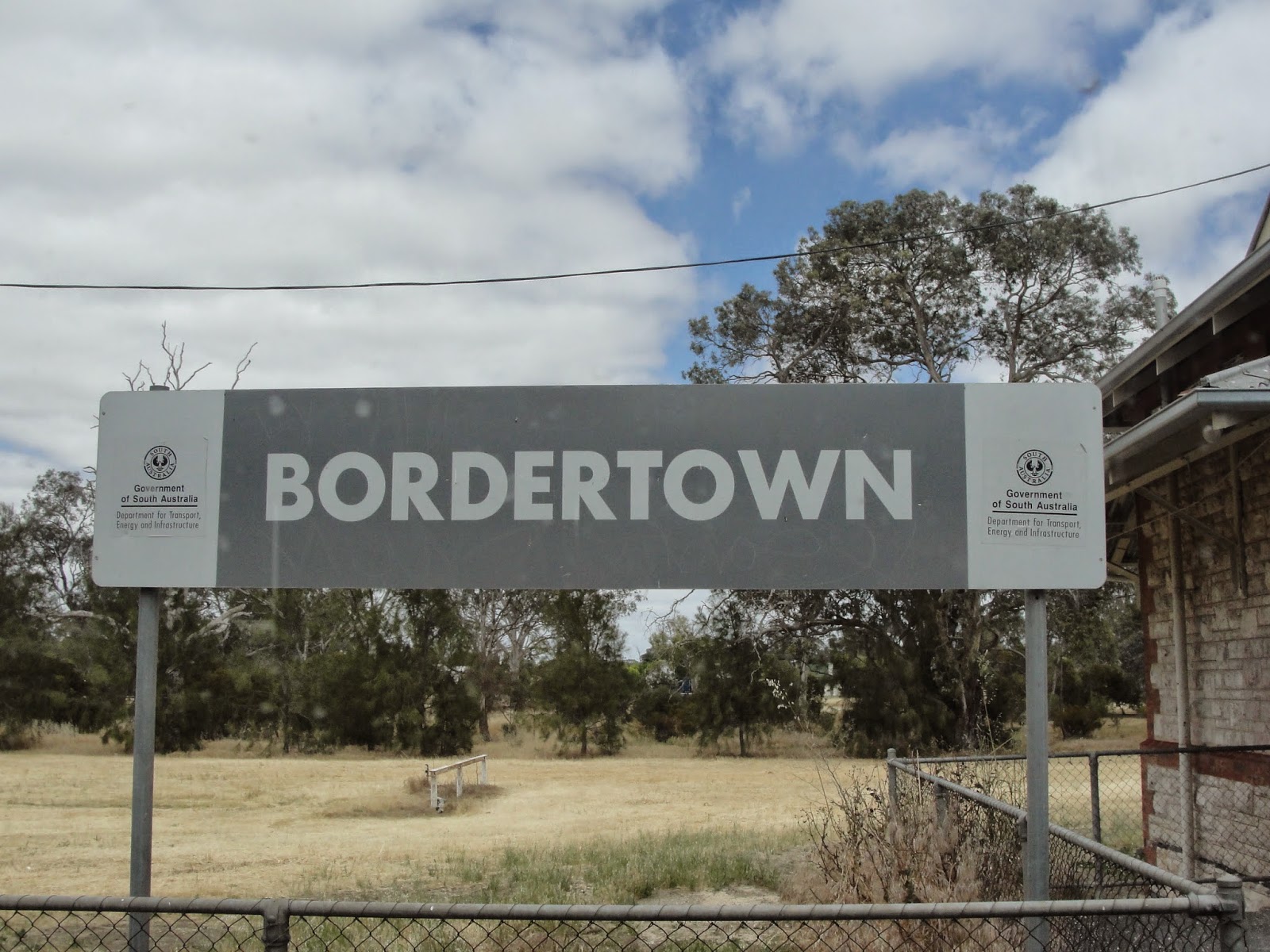 and the award for the most unimaginative town name goes to...

We also made a few stops along the various routes. 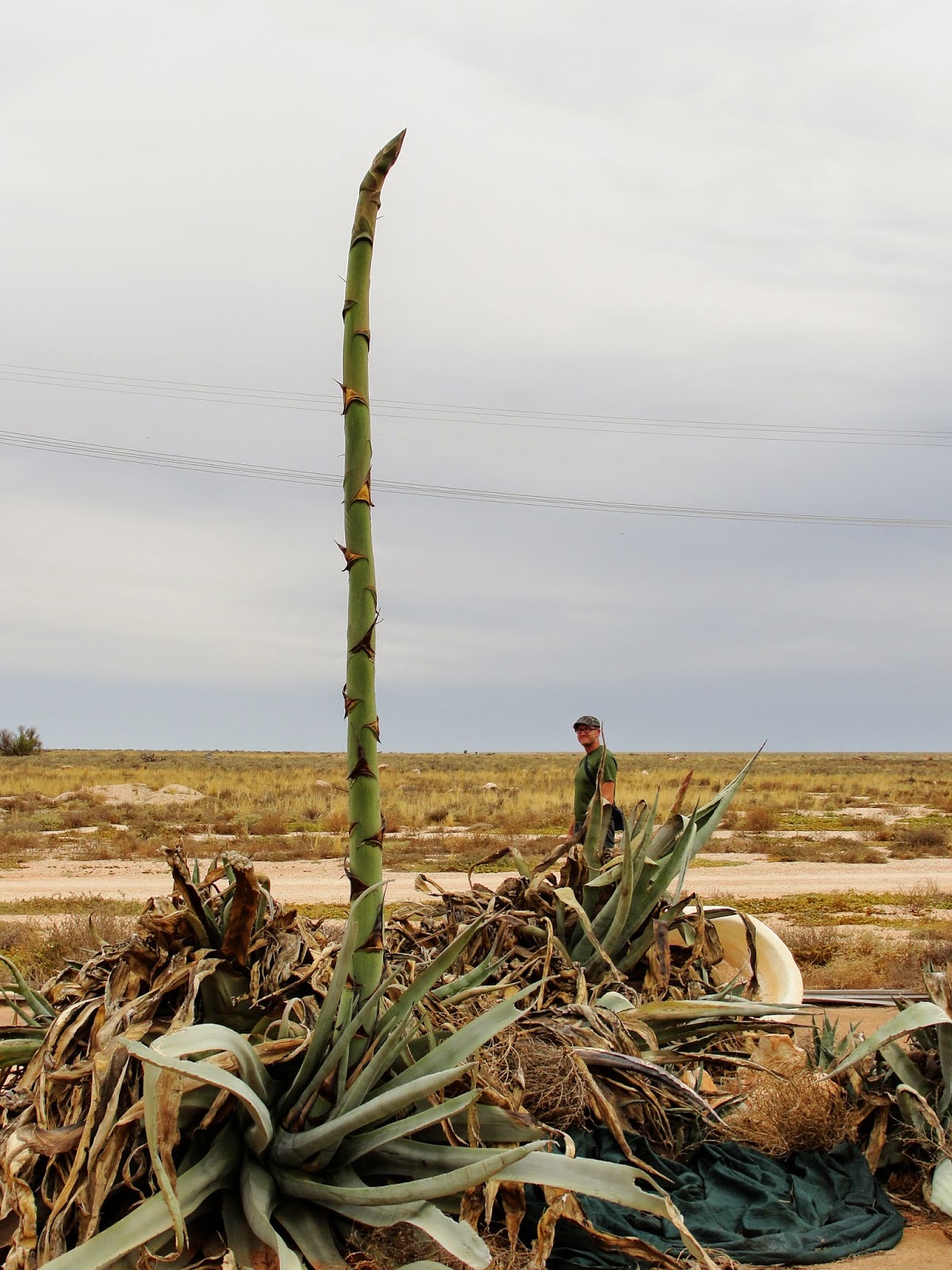 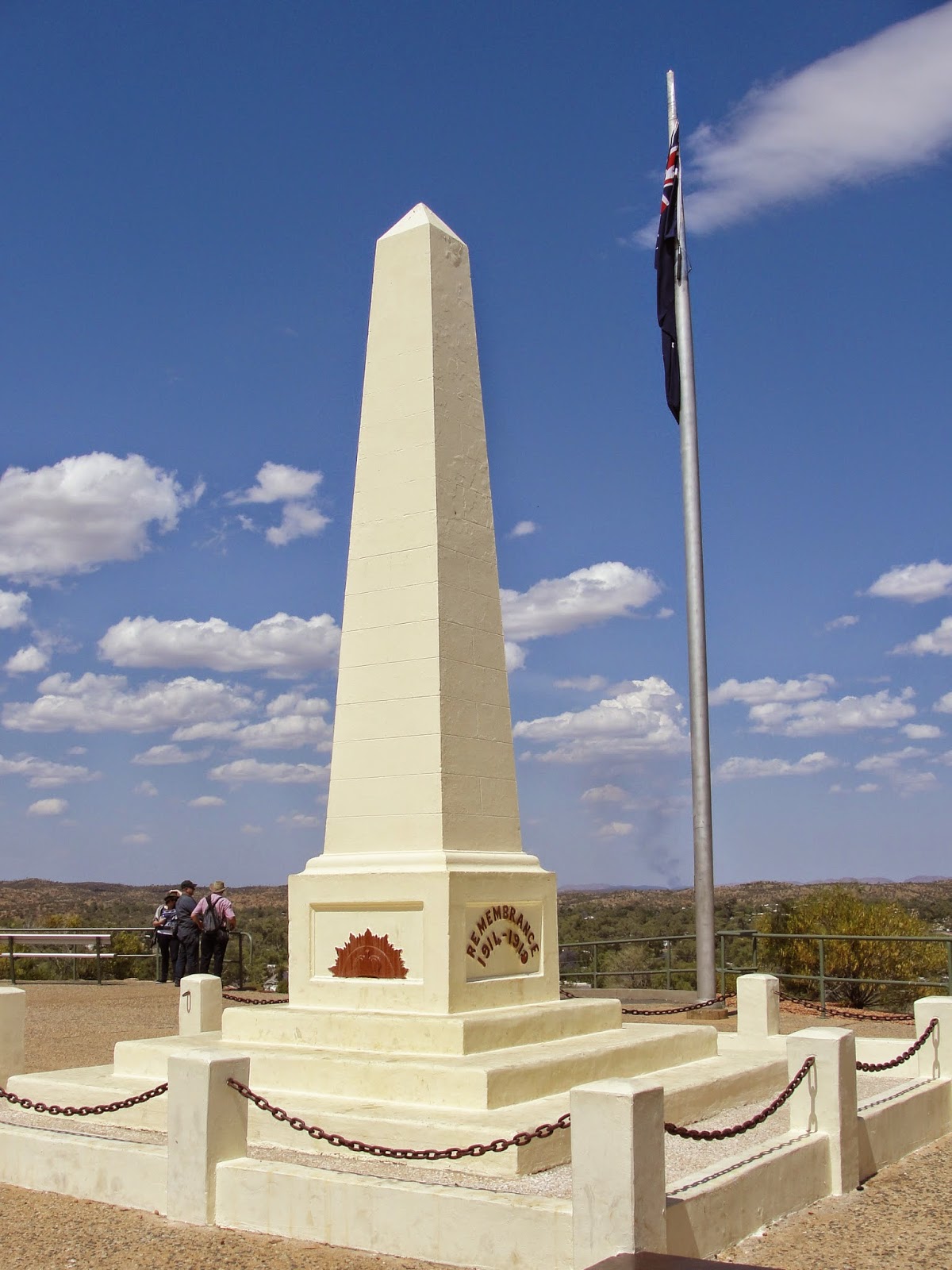 Alice Springs: lest we forget 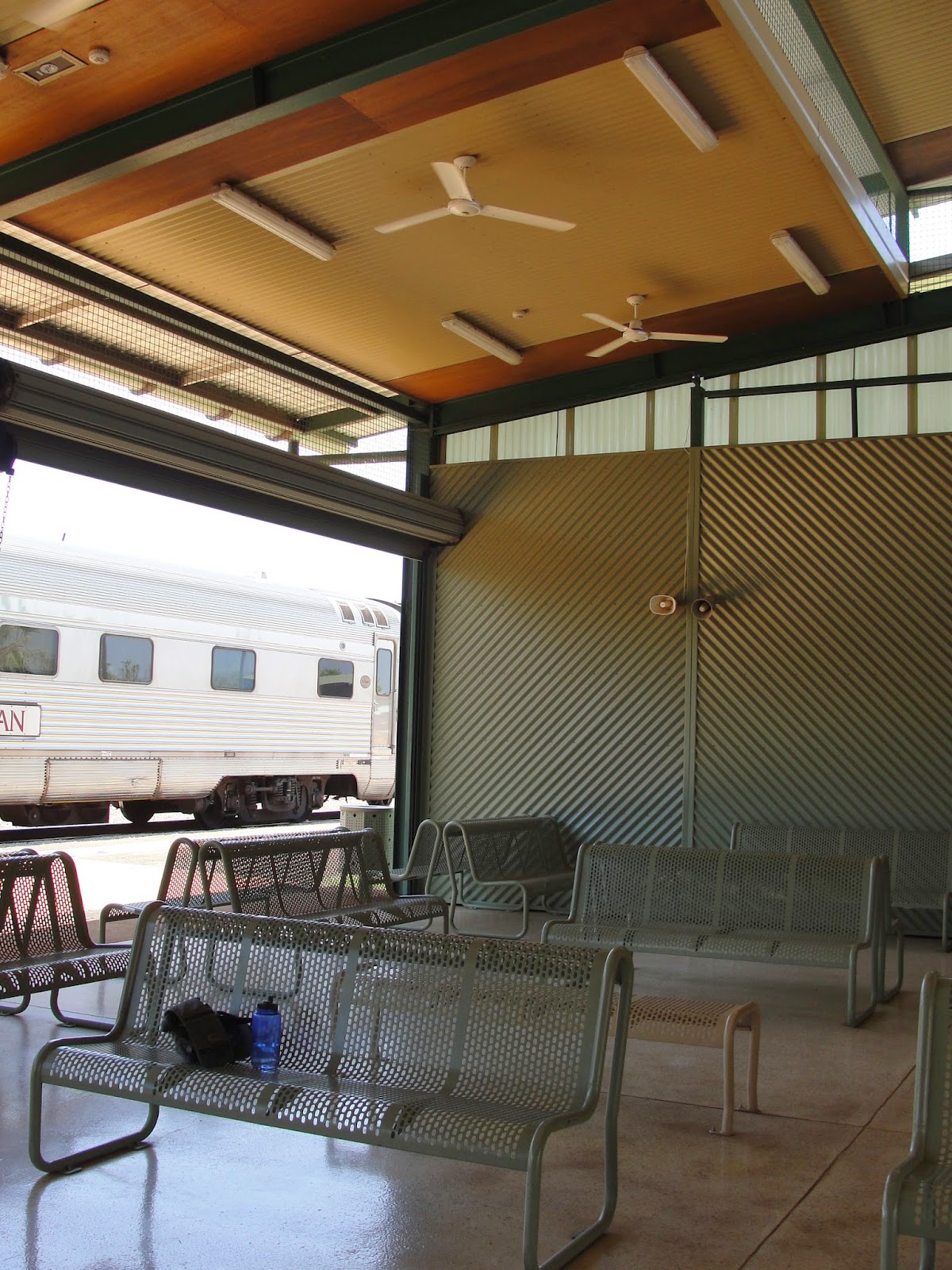 Katherine: not much going on

Of course, the best part was just watching the scenery. We saw parts of Australia that most Australians will never see. And yes, the ride from Perth to Adelaide is brown-green-brownnnnnn... but it was absolutely gorgeous, possibly our favorite leg of the trains. We also witnessed some stunning lightning storms on the way to Darwin. Photos can't possibly do the landscape justice but here are a few glimpses... 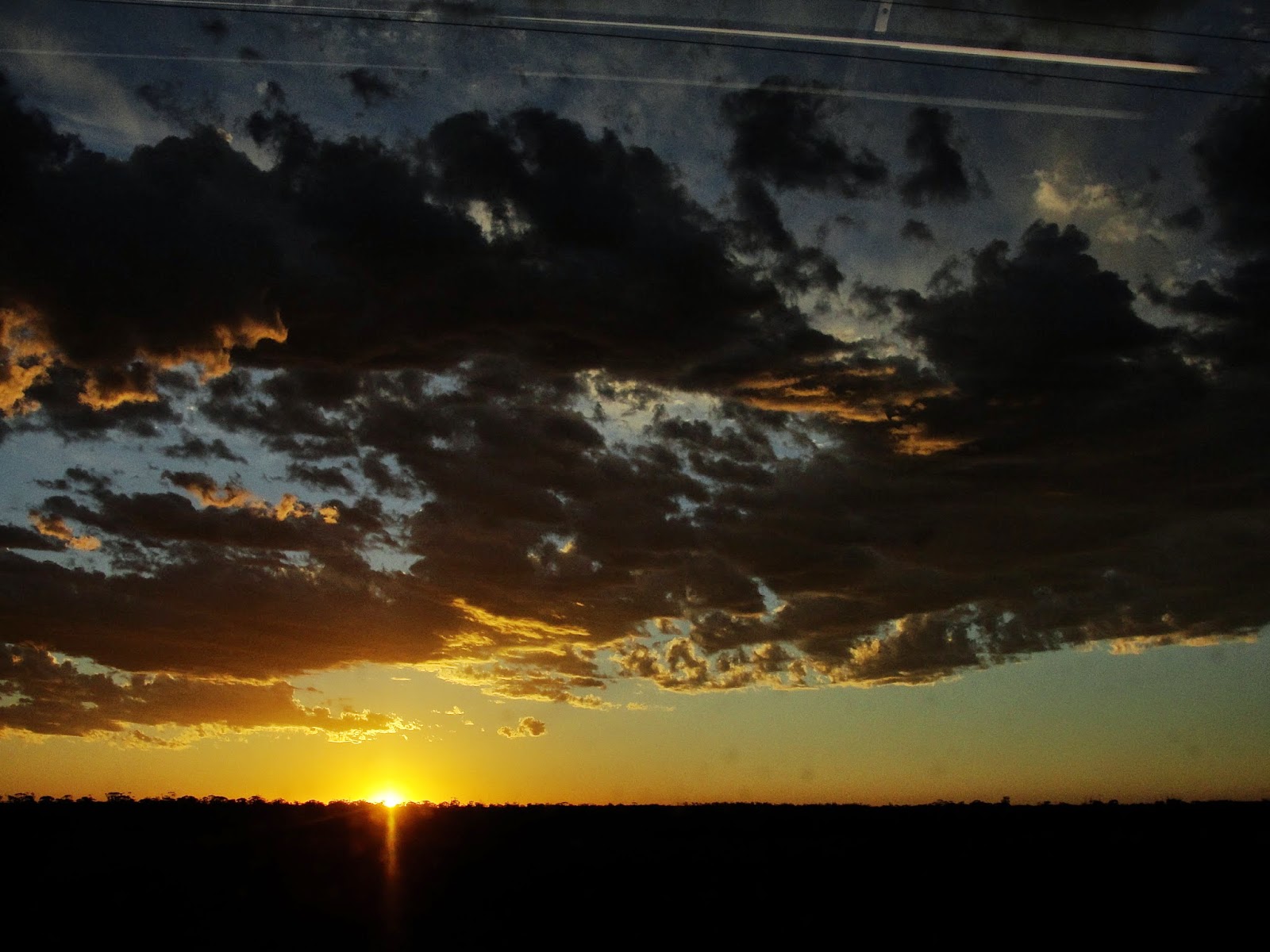 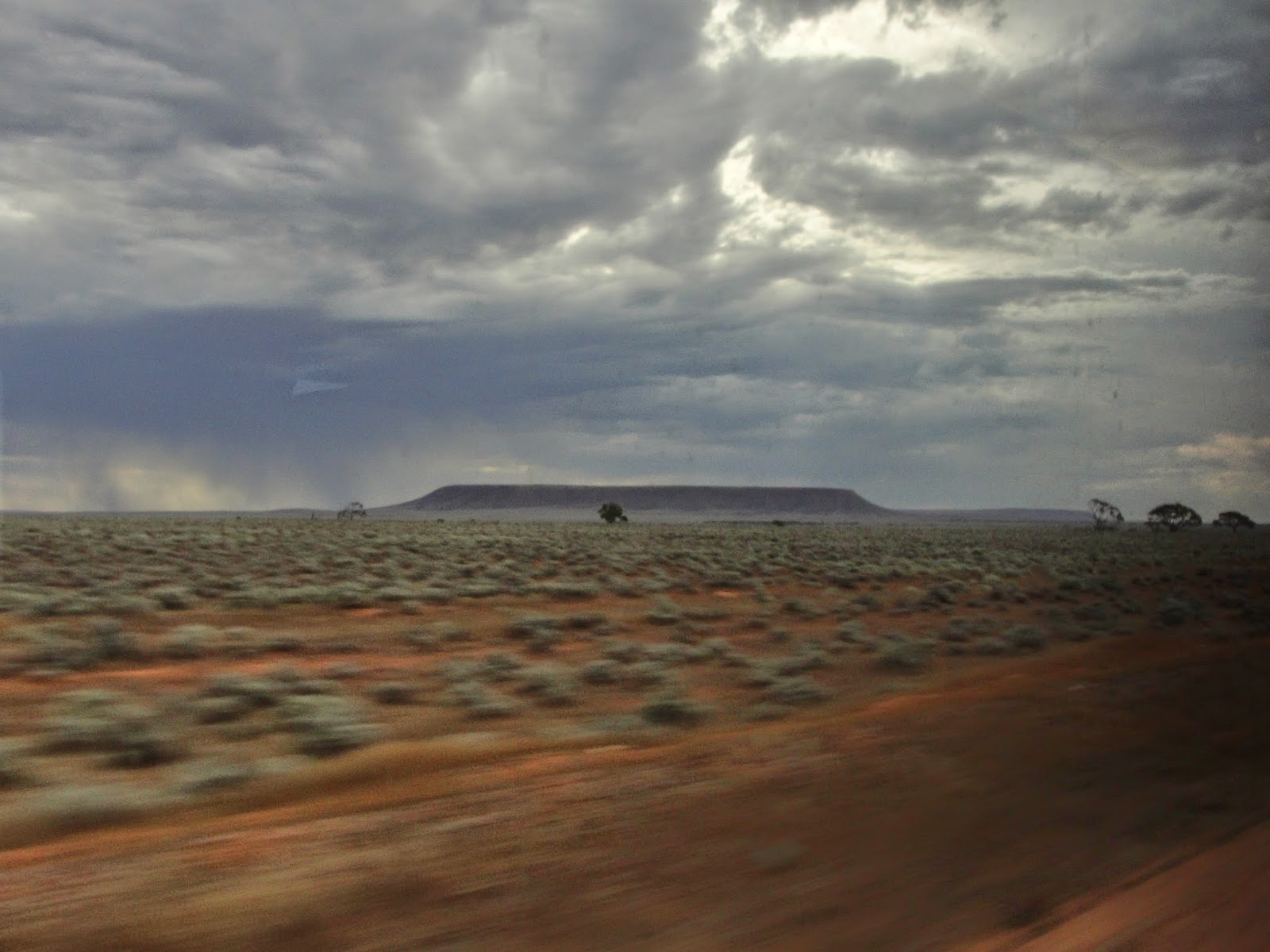 on the way to Darwin: not Uluru
but definitely awesome big sky

on the way to Darwin: brown green brown
(and a little blue) 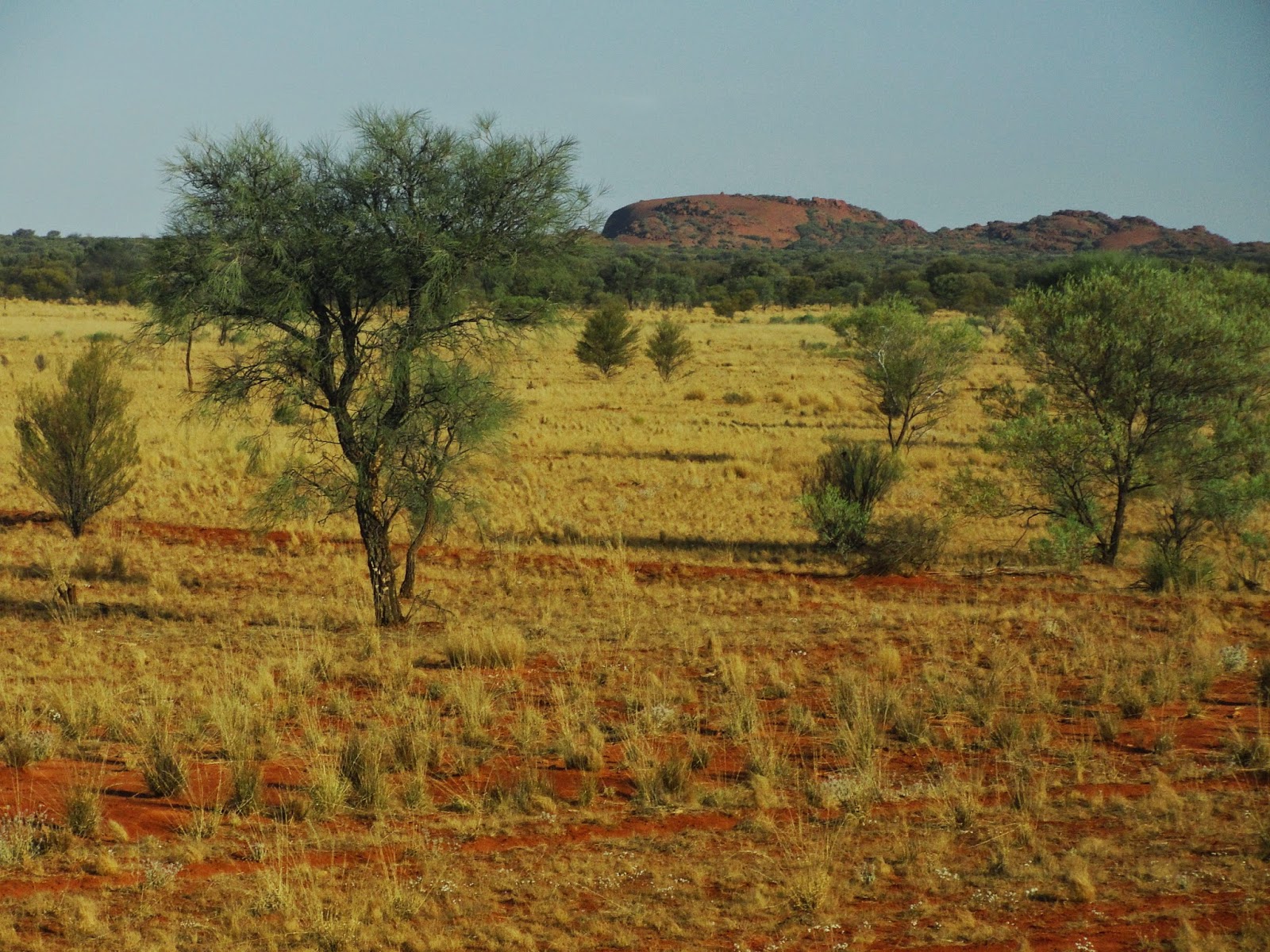 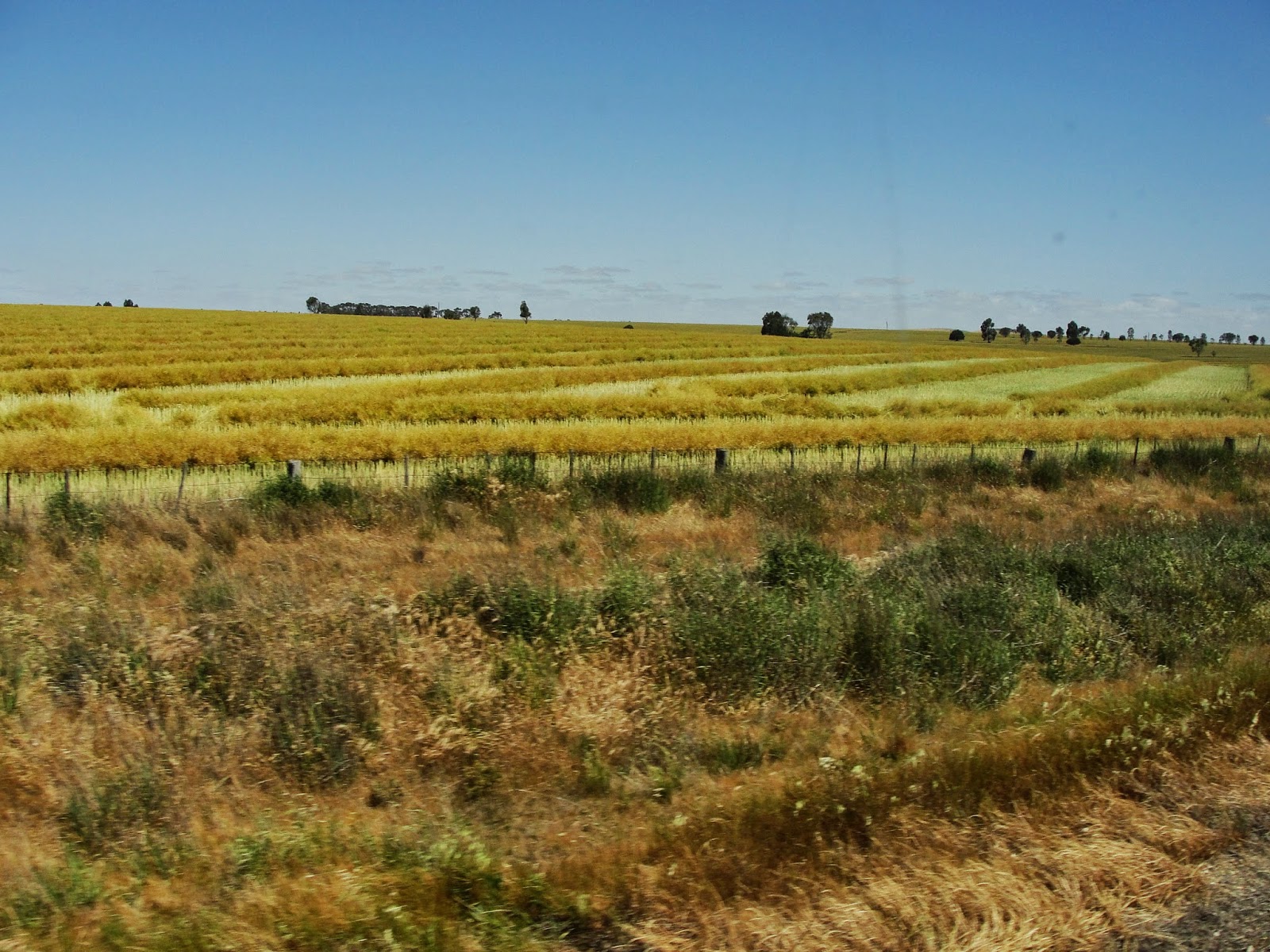 farmlands outside of Melbourne

Every so often the train stopped for several hours and optional tours were available (for a price). The side trip to Katherine Gorge was the only one that was remotely appealing, but because of our timing the river was low and we'd only get about an hour there so we just didn't think it would be worth the extra cost. We also didn't stay over in Alice Springs and head out to Uluru. After all, we had to save some things for next time! 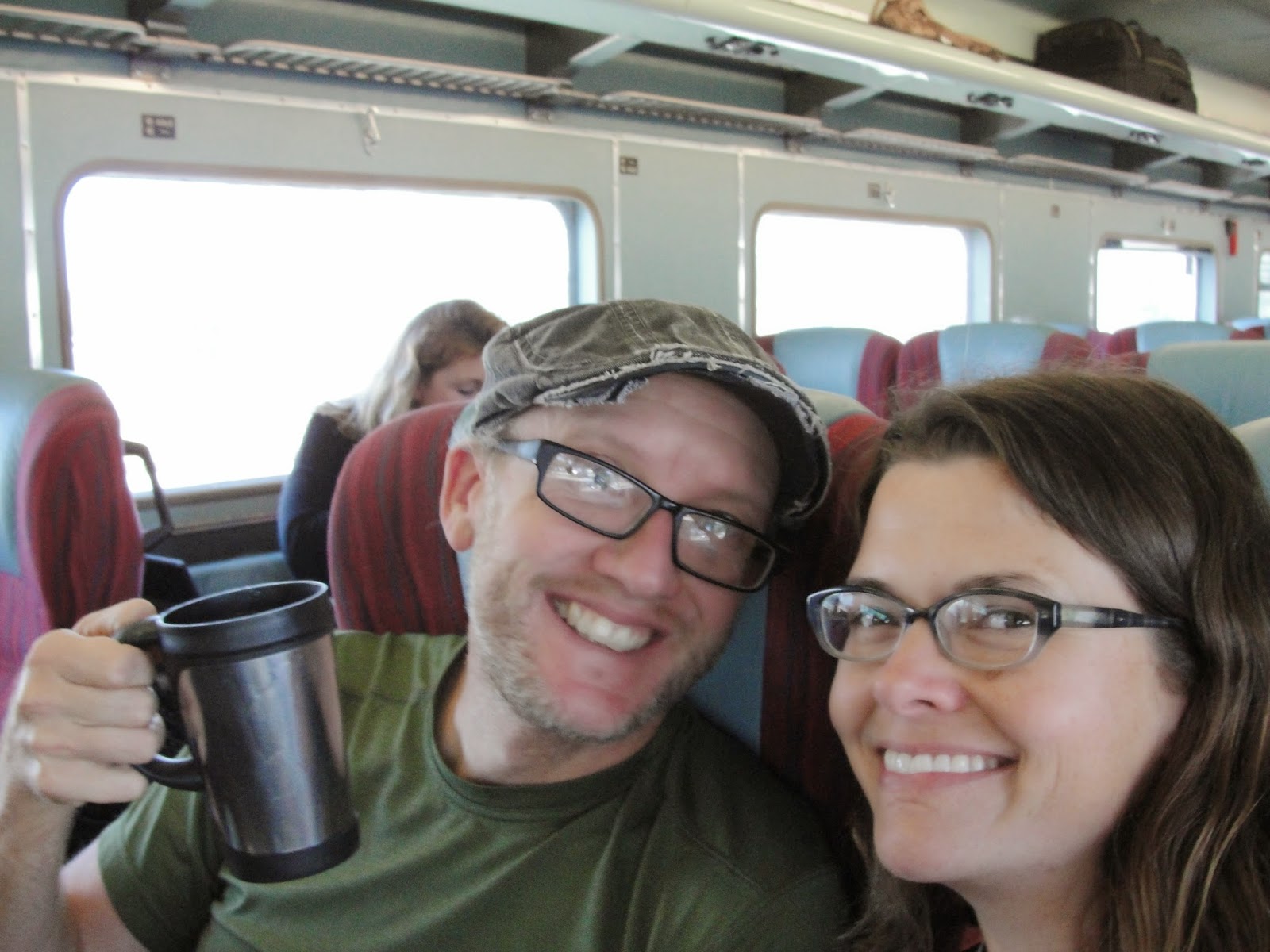 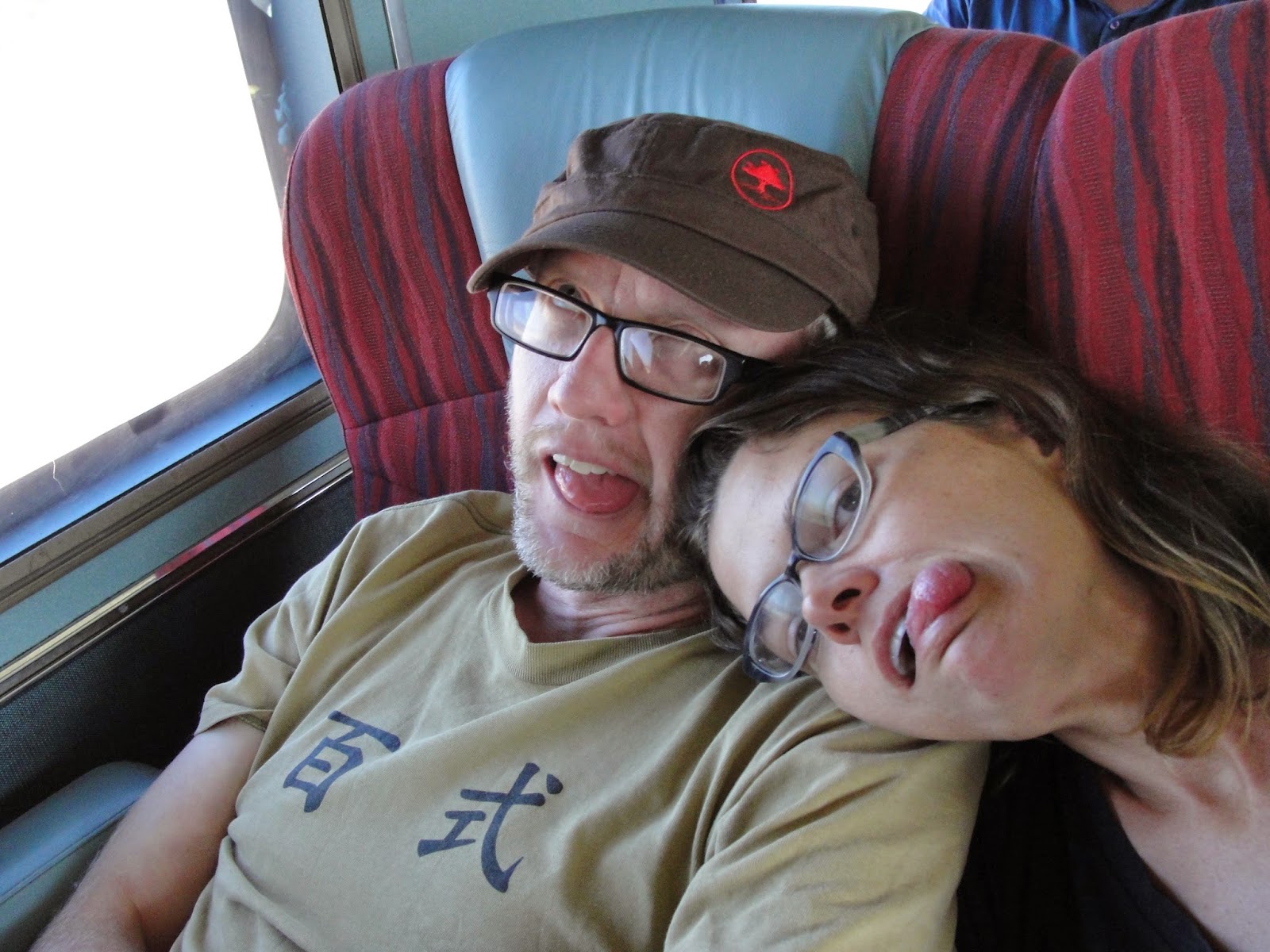 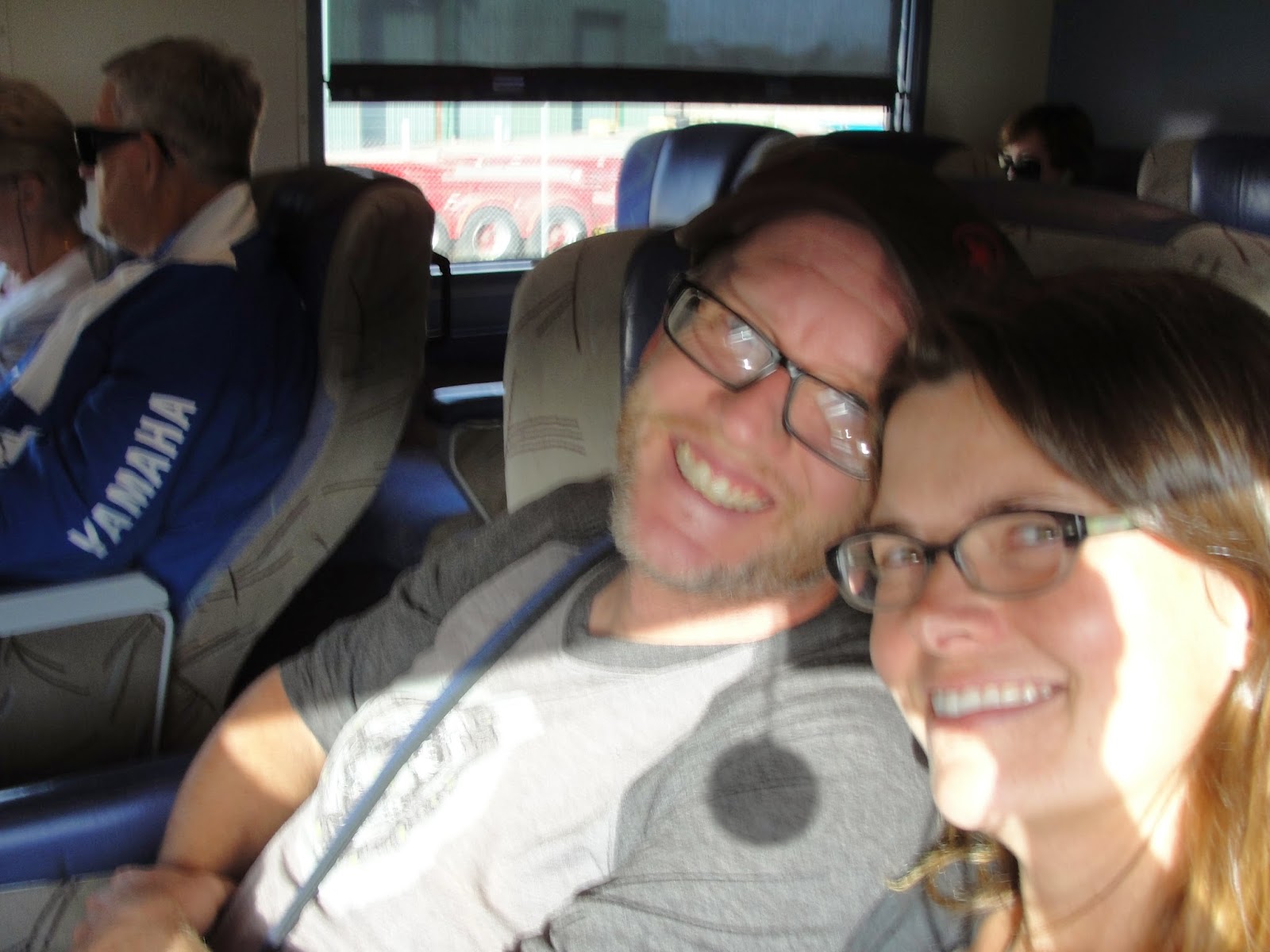 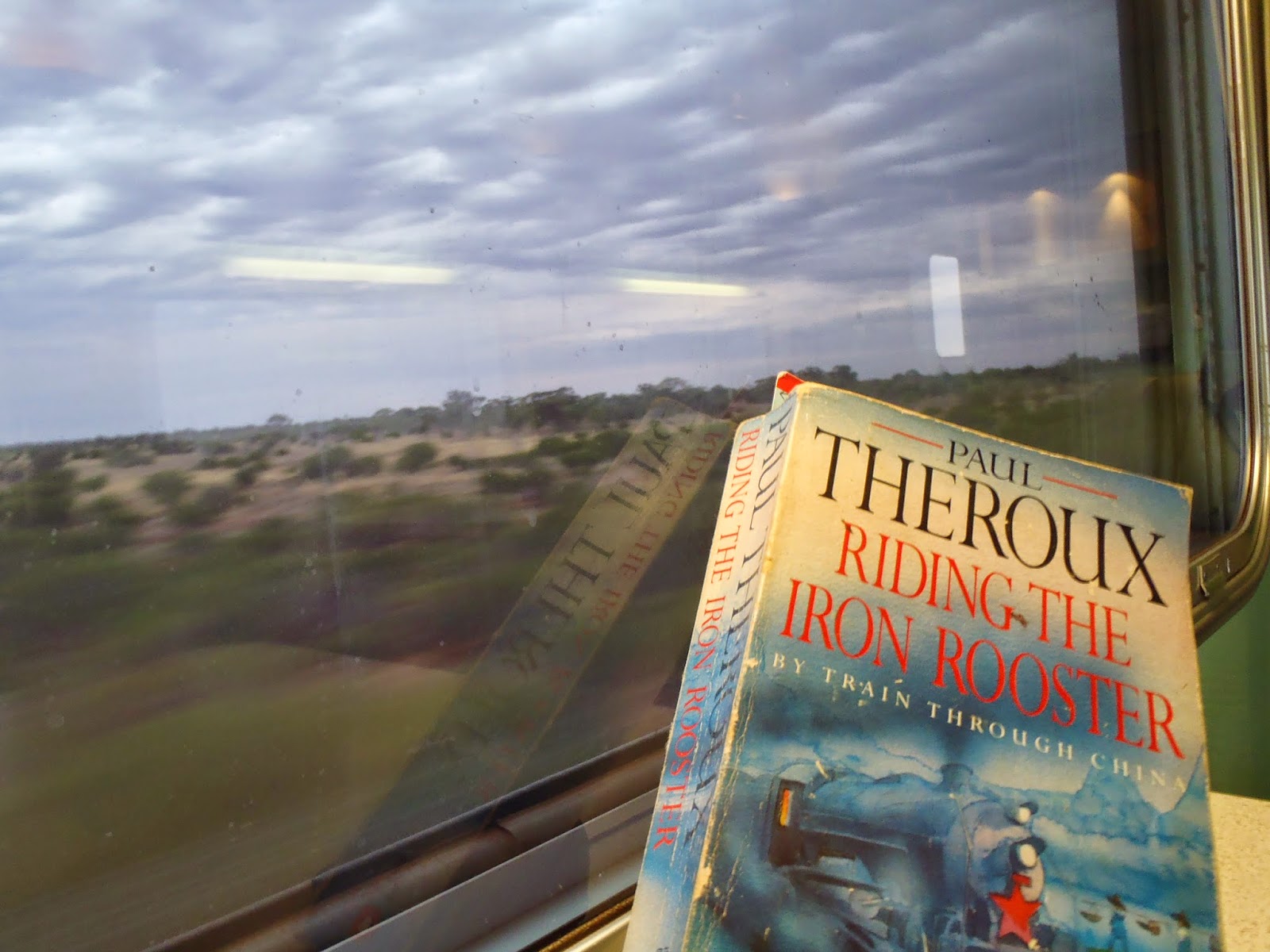 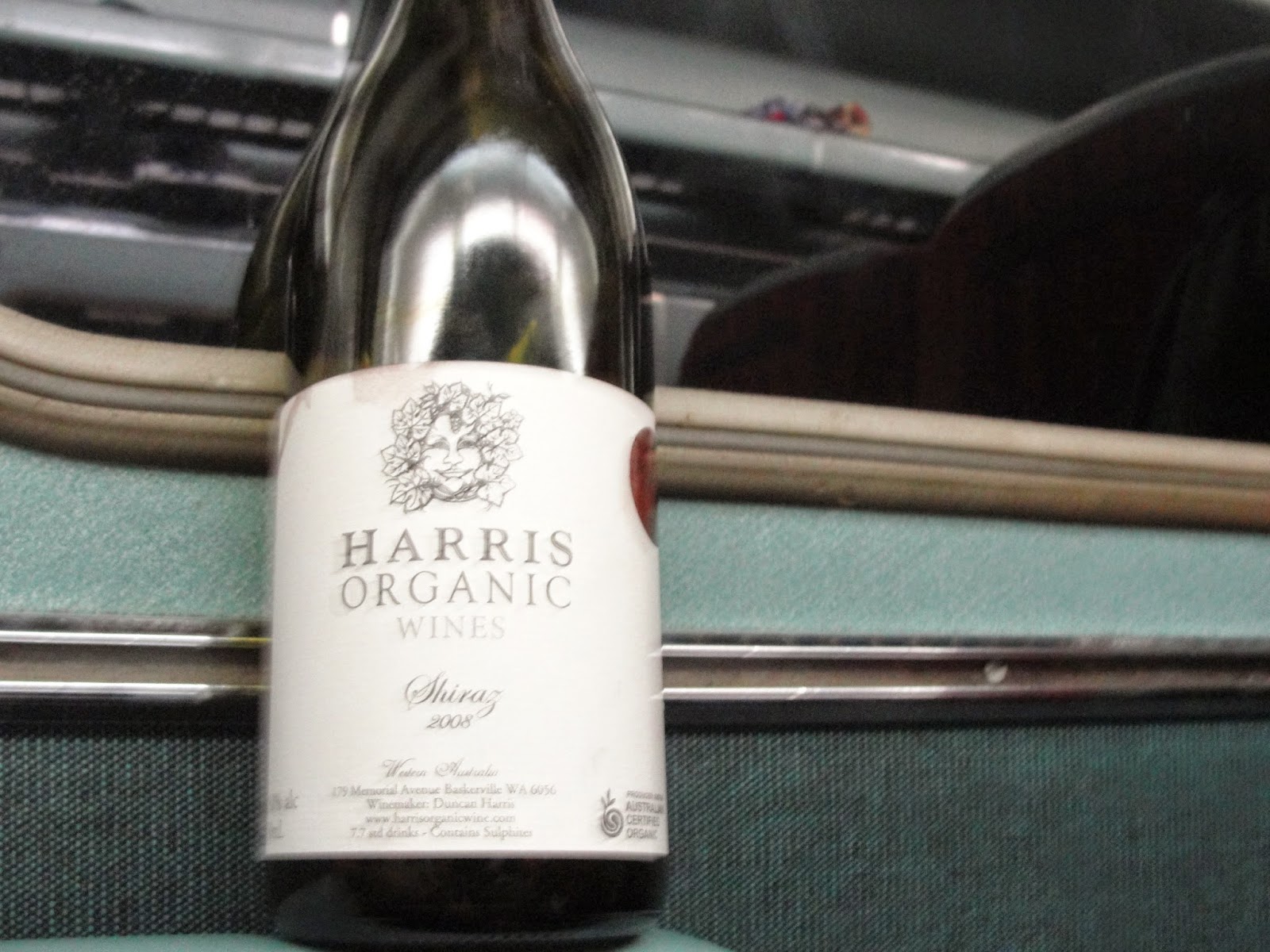 can't bring your own alcohol?
riiiiiiiight

A few down sides to the Red Service:

Despite those minor issues, we highly recommend this method of travel if you plan to visit Australia for an extended period of time. Please leave a comment or email us directly if you have any specific questions - we would love to share any additional details or suggestions with you. And if you have done one or more of these train trips, leave a comment and let us know about your experience!
Posted by Slowly Global
Email ThisBlogThis!Share to TwitterShare to FacebookShare to Pinterest
Labels: australia, money stuff, travel tips