Every-day-is-Friday five: a day off in Darwin.

Darwin is the capital city of the Northern Territory of Australia. It was originally called Palmerston (which is still a nearby town) but was renamed "Darwin" in honor of Charles Darwin's voyage here back in 1836. 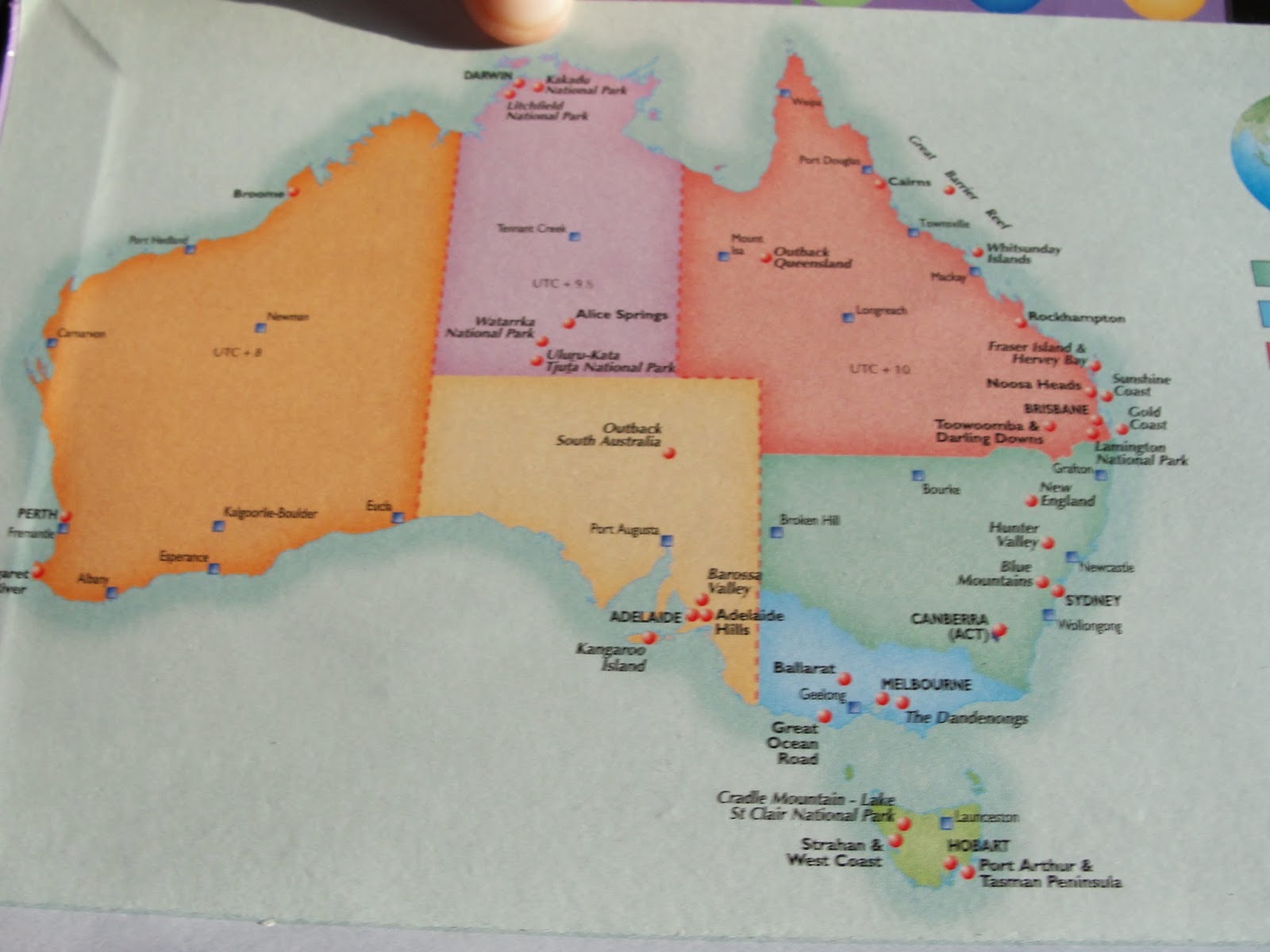 see northern fingertip - we were here
It's rainforest bushland with two seasons - wet and dry. Primary agriculture includes pumpkins, melons, mangoes and other tropical fruits. Cattle stations are also common (although most of the herds are now shipped overseas). Wallabies are to Darwin as deer are to the rural US; dingos less so but they're also pests. Darwin has lots of poisonous snakes and as with most of the Australian wetlands, cane toads are a huge problem.

It's a melting pot, and not just because of its proximity to SE Asia and the ease of traveling to/from Thailand, Indonesia, and other Pacific Island countries. Years ago many Chinese immigrated to Darwin to help build the railroads and mine the gold fields. And now many African and Middle Eastern families are leaving their war-torn countries and seeking refuge in Australia. As you can probably imagine, there's a fair amount of controversy around these influxes - much like Mexican immigrants coming into the US or any other mass immigrations in recent history, for that matter.

And this amazing young singer hails from Darwin.

Now that you know as much as we do about the largest city in the Northern Territory, we'd like to offer five things to do if you should find yourself in Darwin, in no particular order:

1. Take a historic walking tour. Australia's history is obviously not as "ancient" as many of the countries we've visited, and the city of Darwin lost a lot of its historic sites during WWII and Cyclone Tracy, but there's still quite a bit to take in. 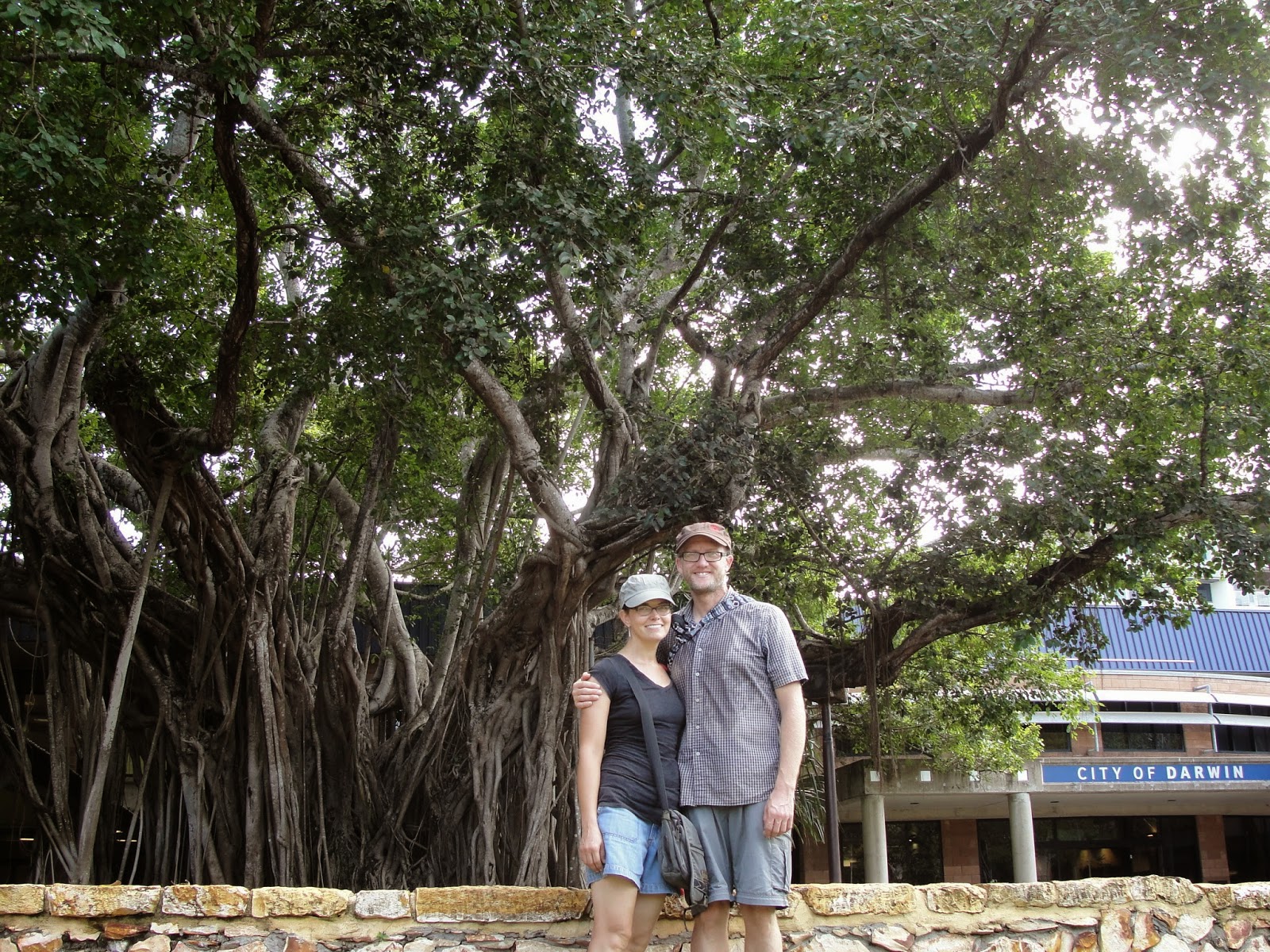 the tree of knowledge -
back in the day, Chinese youth met with,
and learned from, their elders under its shade 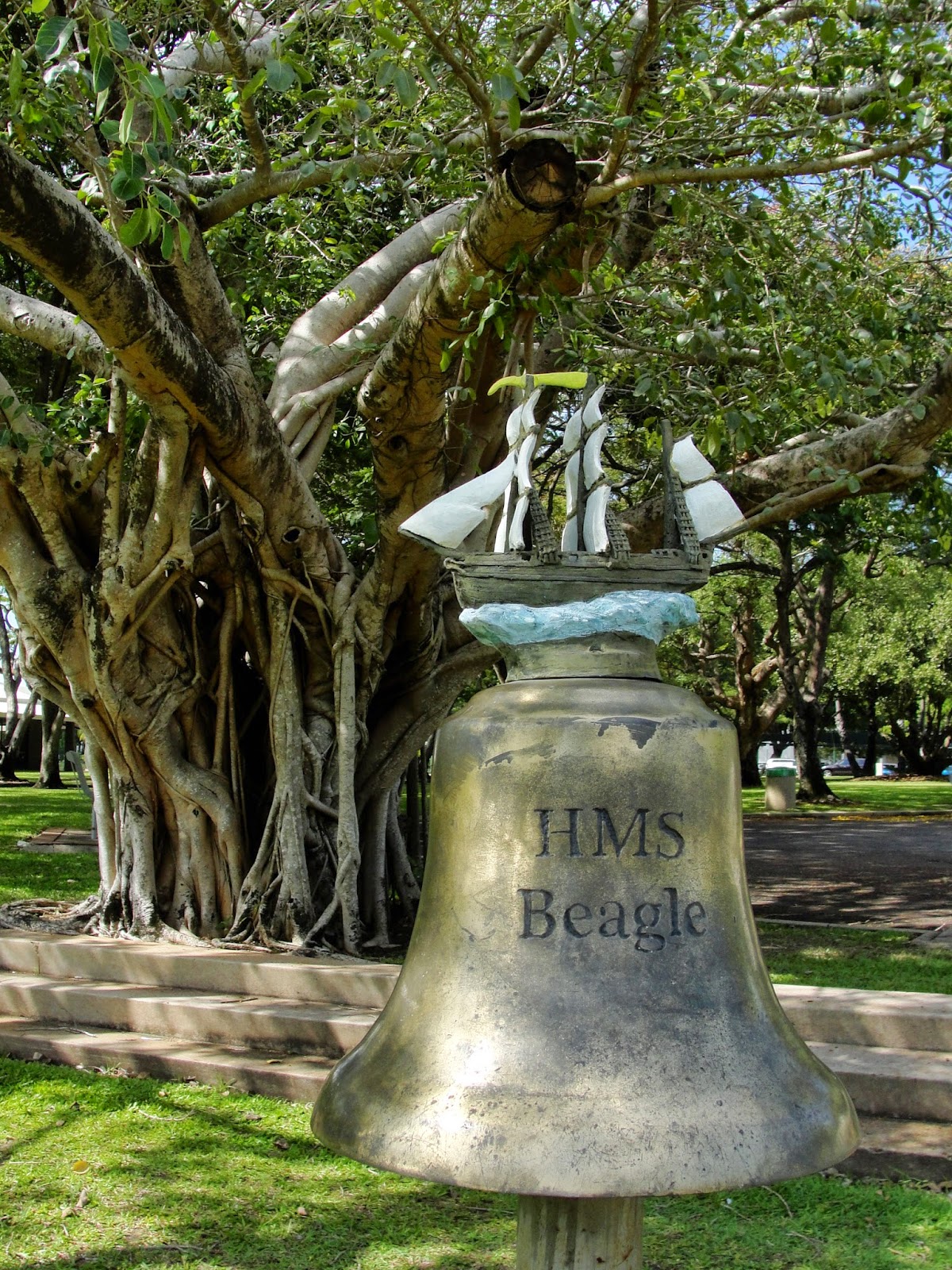 nearby, a cool sound park featuring copper bells
with pitches like the local parrots 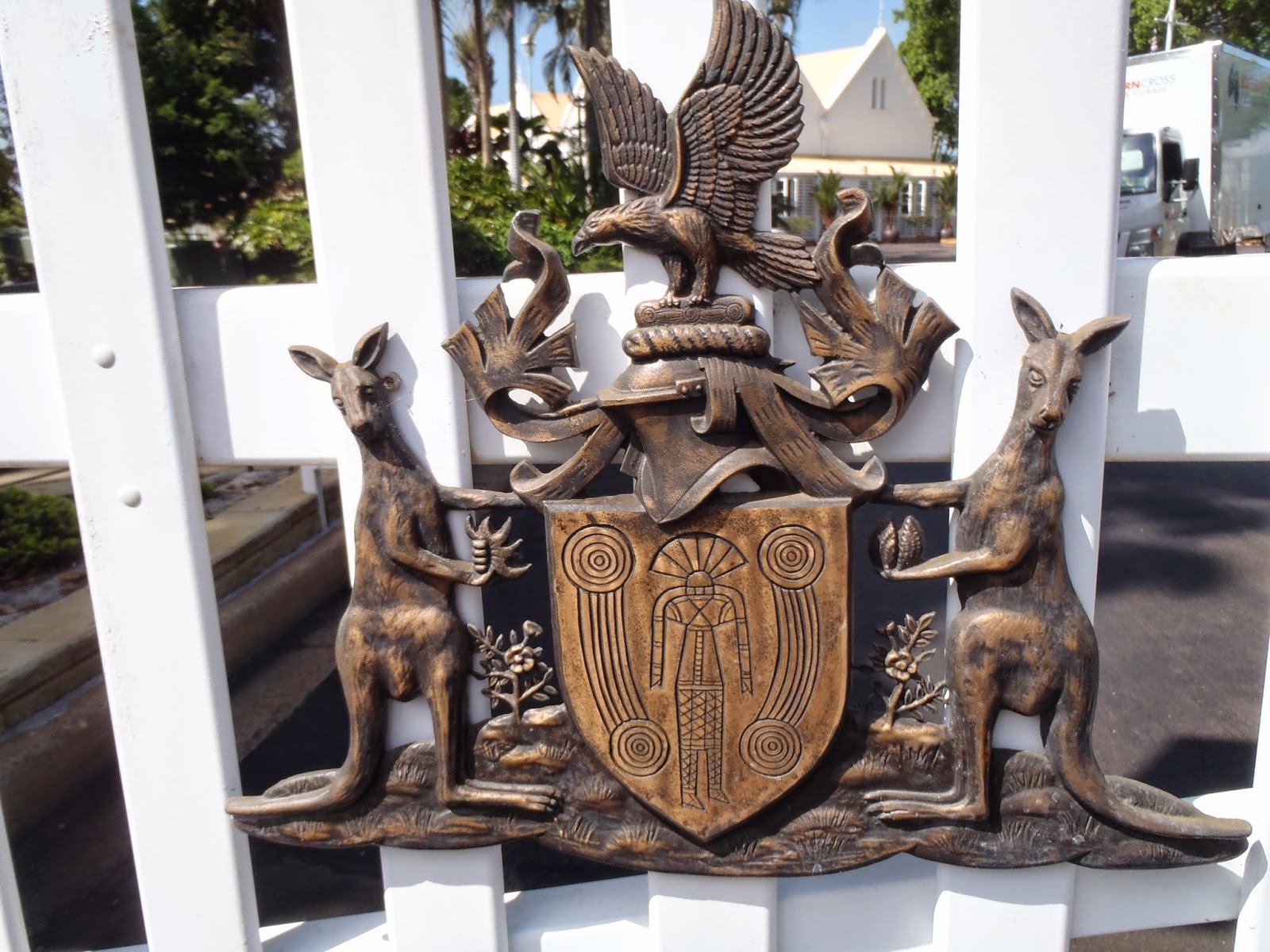 kangaroos on the shield
at the Government House 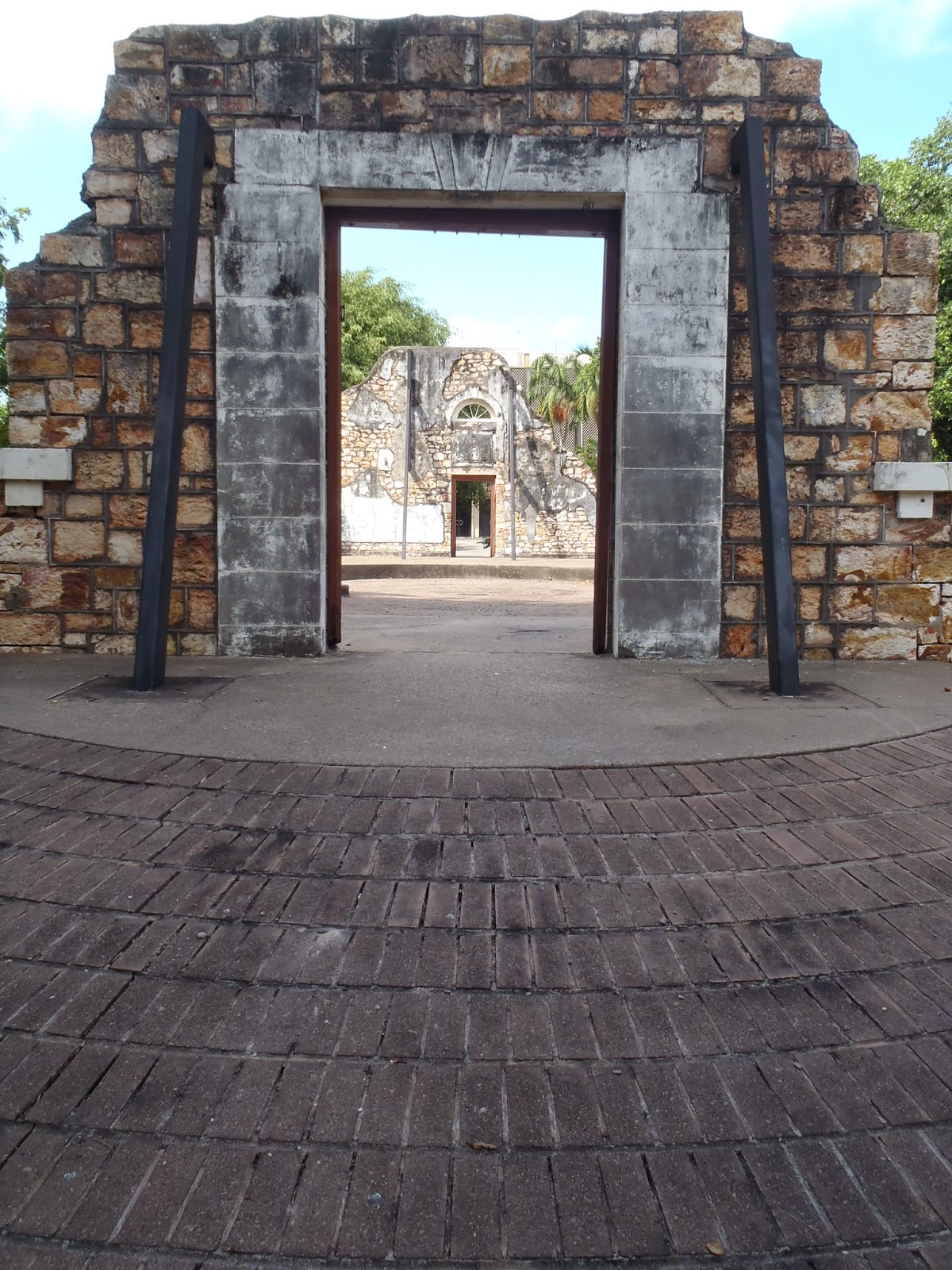 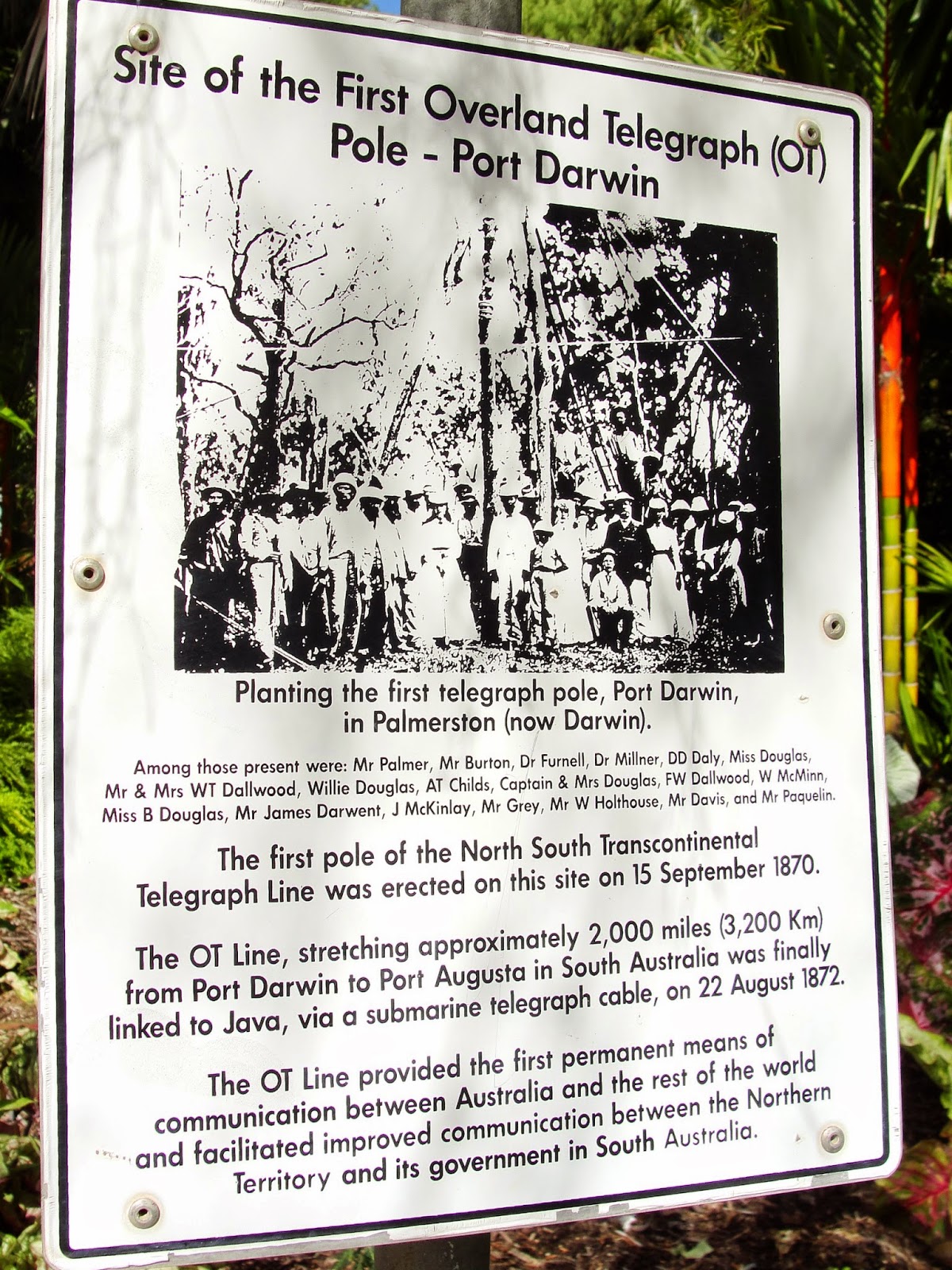 Australian for "ancient history"
2. Visit the Chinese temple and museum. The museum is small but packed with history about the Chinese migration to Australia and their struggles to integrate with a mostly-white society pre- and post-WWI. There's also an amazing wall of family trees of current "ABCs" (Australian-Born Chinese). 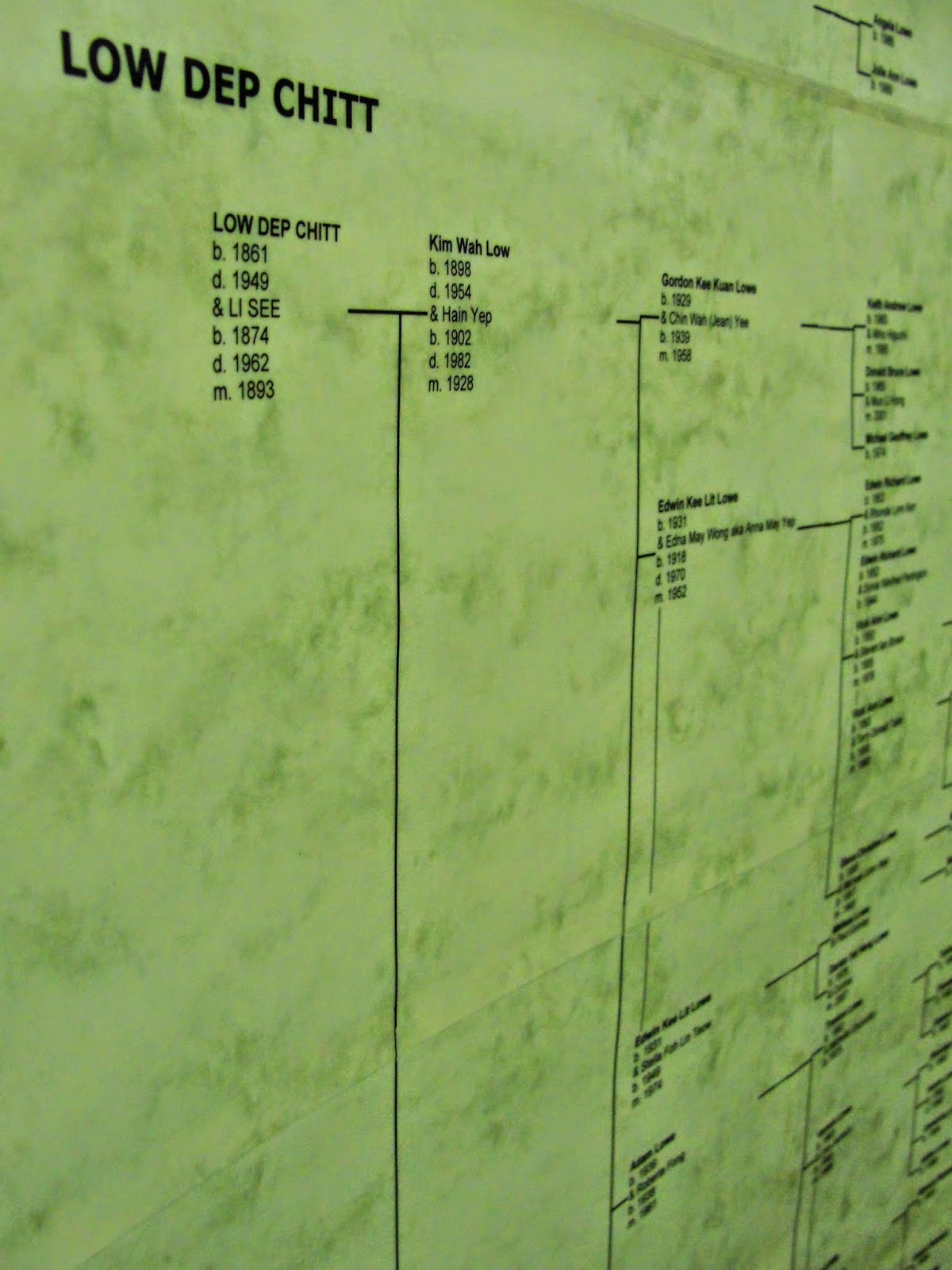 tracing back
The volunteers manning the museum desk that day seemed a bit surprised to see us - it was the last day of their open season and they'd only had a few visitors all week. But they were wonderful hosts and after we toured the museum we enjoyed a great conversation about Darwin and traveling in general. With admission set at only $4 there is no reason not to visit... unless you're there November-March, when they are closed for the season.

3. Visit the Northern Territory Museum. We saw amazing exhibits of aboriginal art, underwater photography, actual boats from all around Australia and the Pacific Islands... 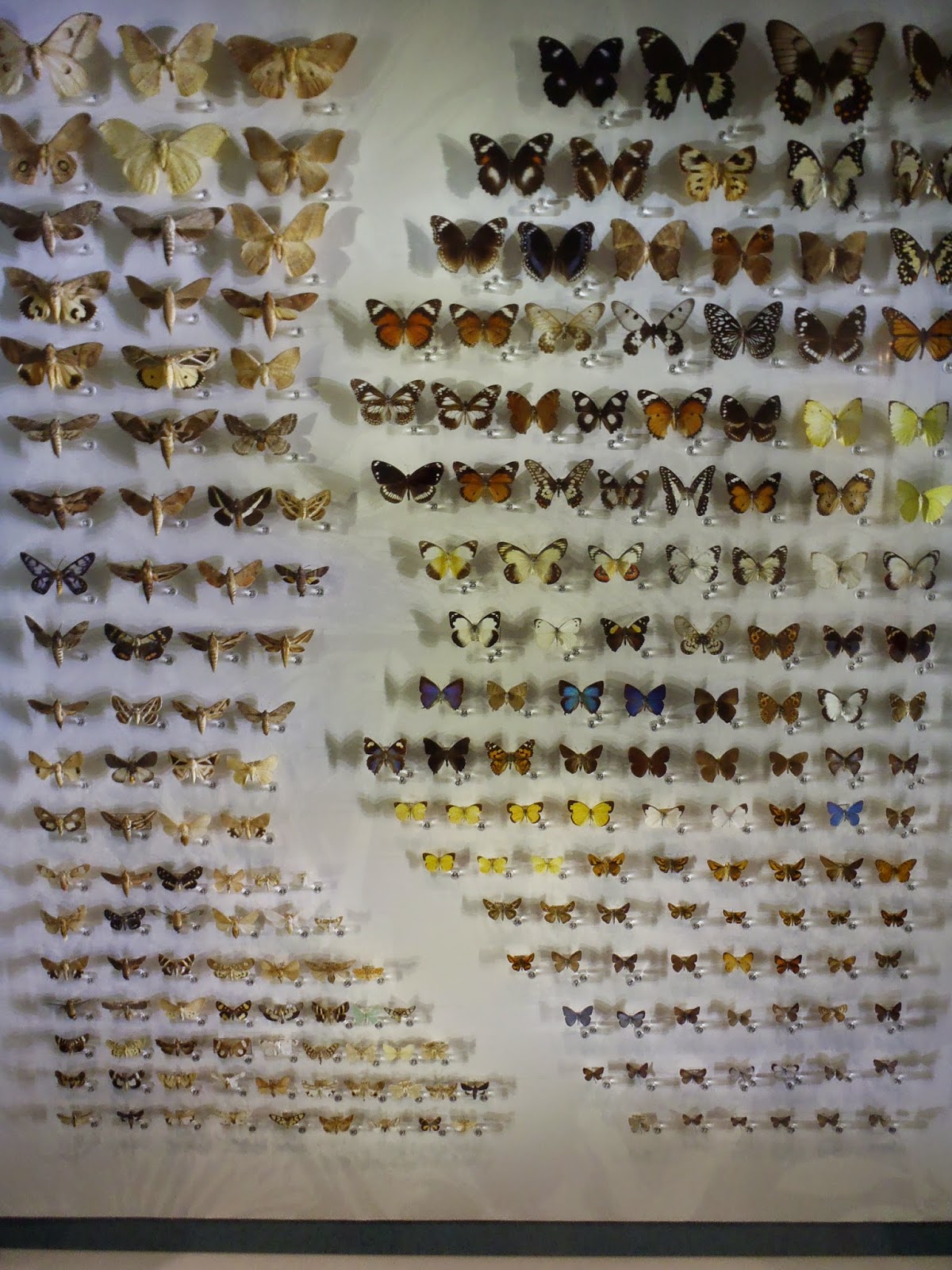 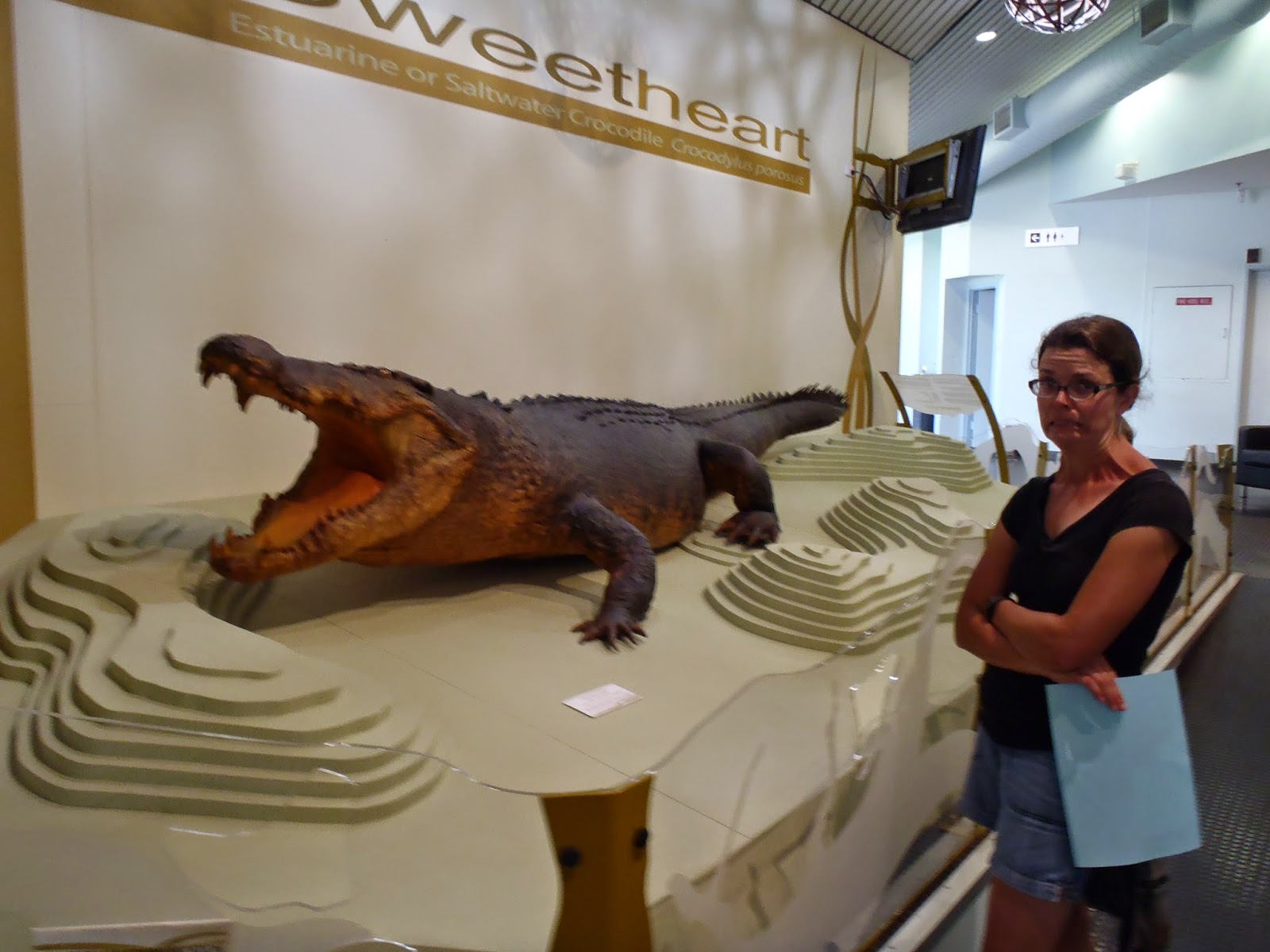 ... and of course, Sweetheart
Admission is free. Plan at least three hours! 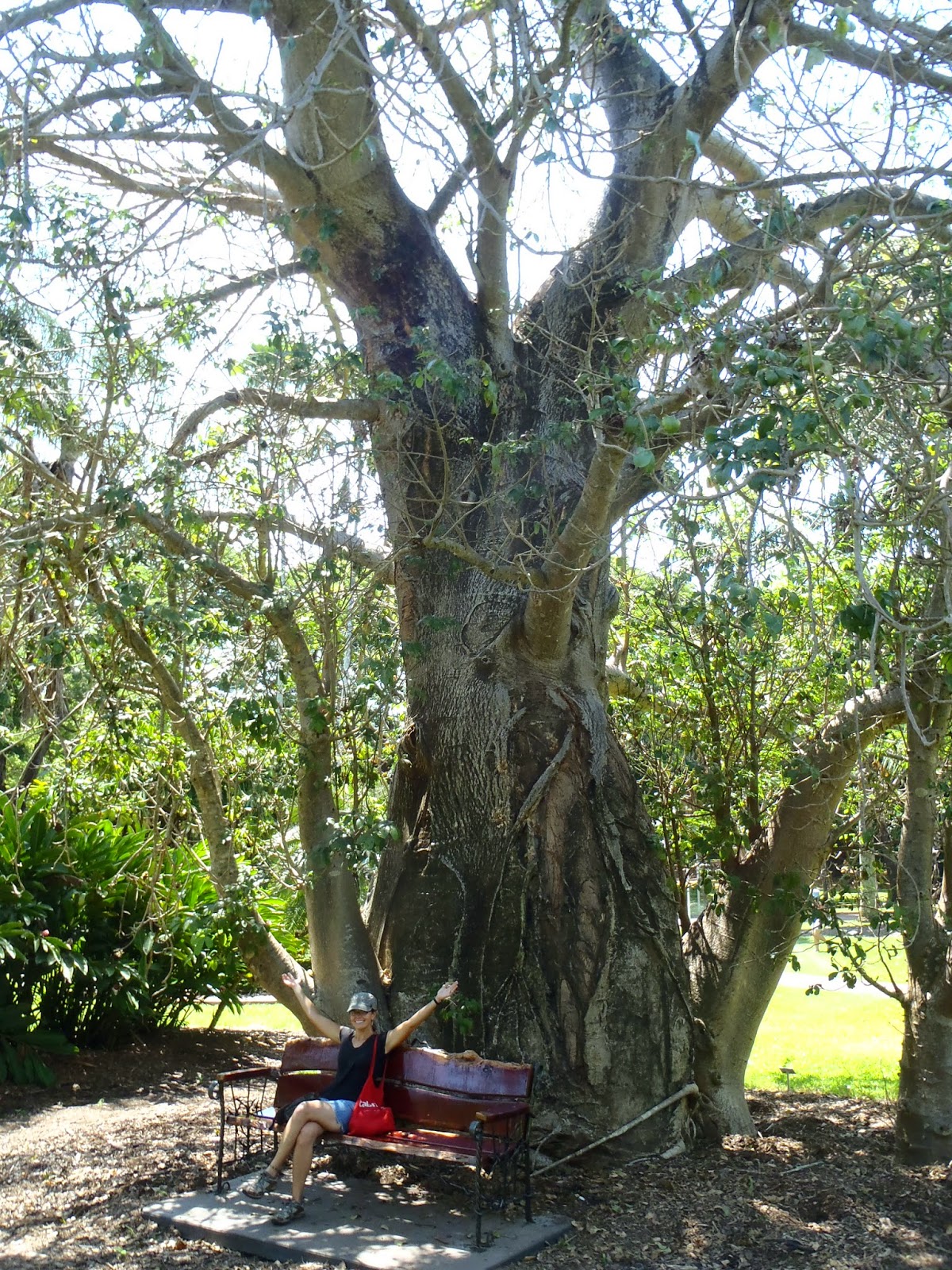 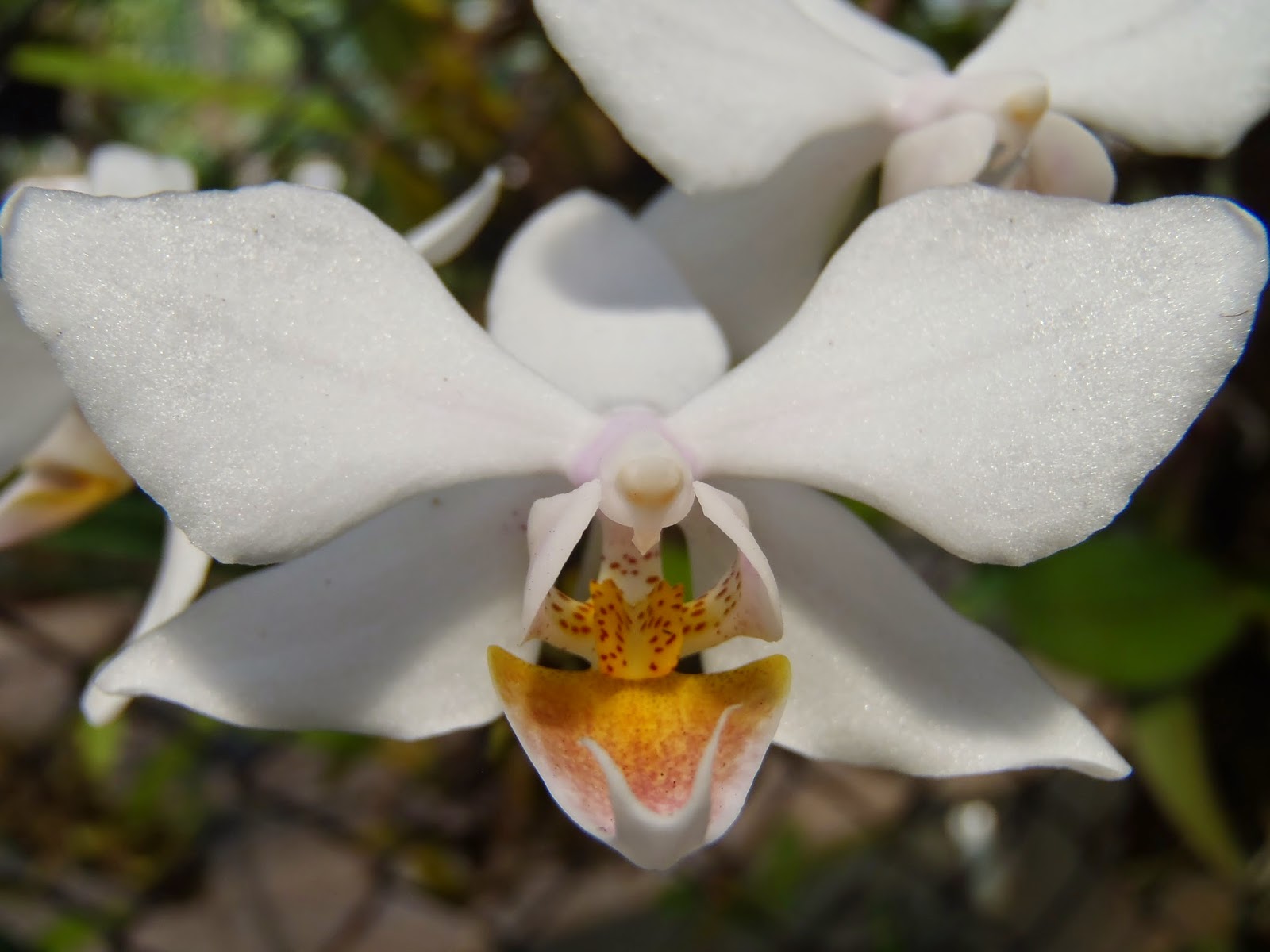 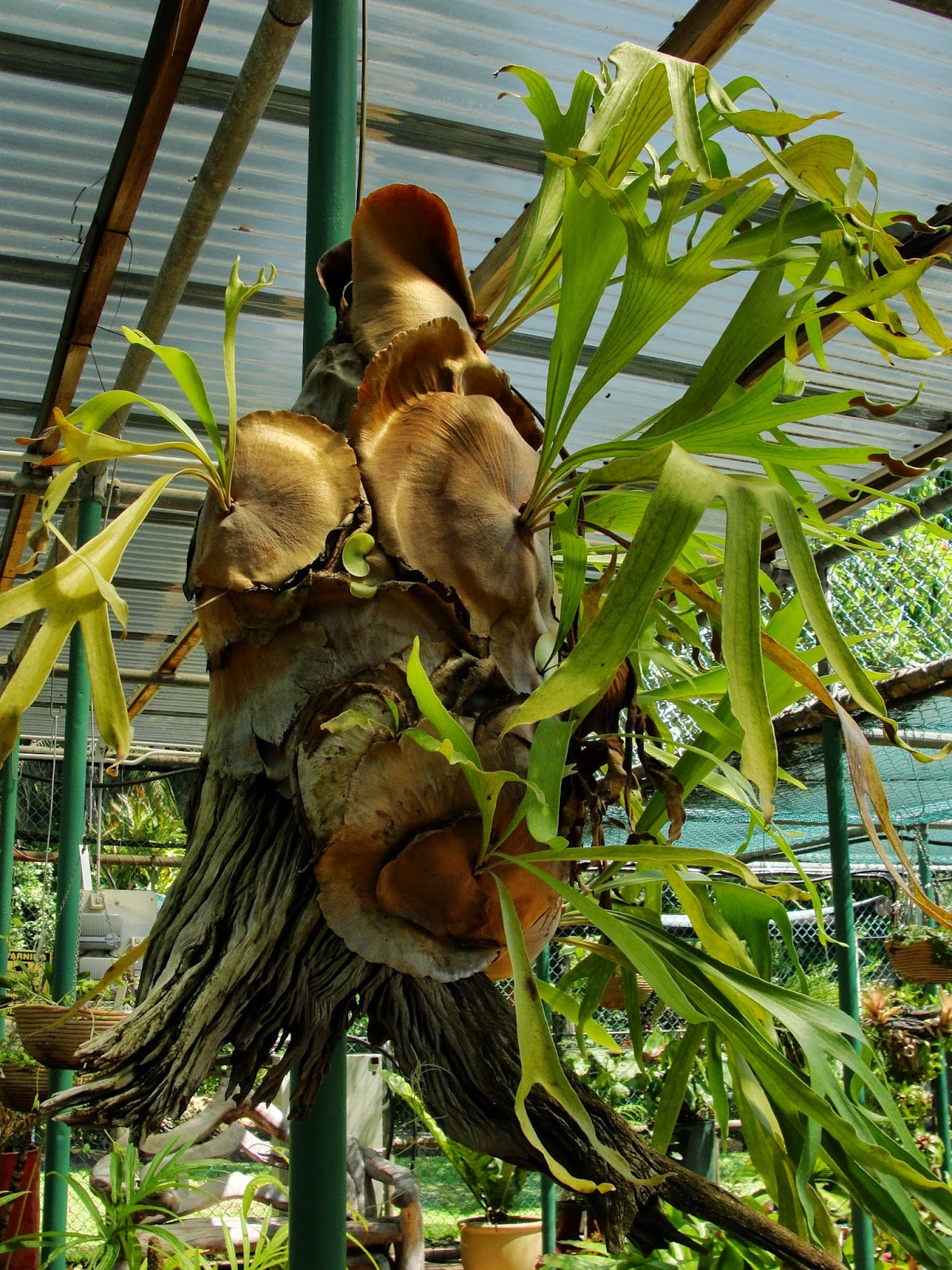 really cool orchids!
Everyone we talked to in Darwin kept telling us we came at the absolute worst time of the year - it's the end of their dry season so everything is parched. In spite of this (and the 40F temperatures that day), the Botanic Gardens were still worth a look. 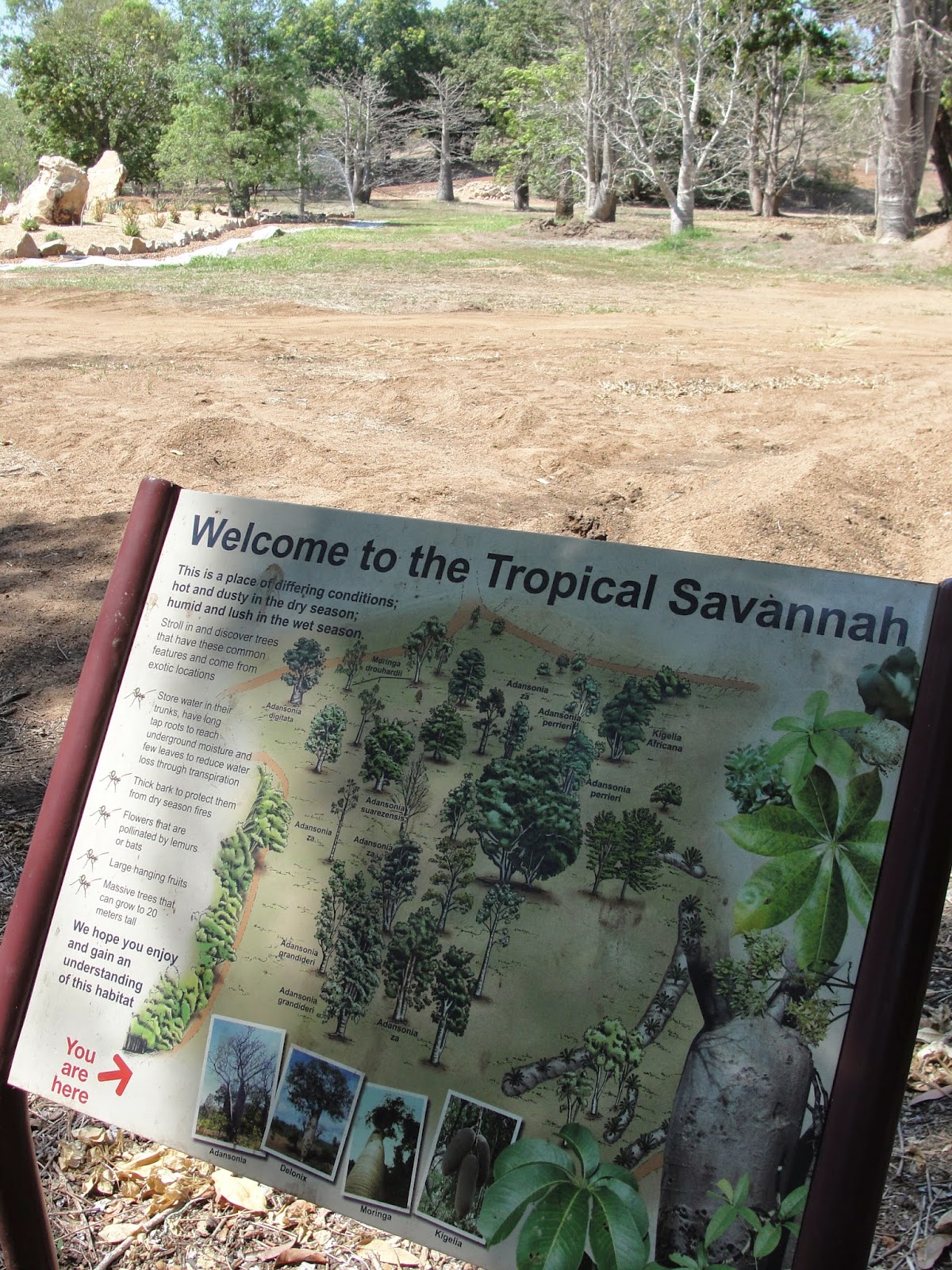 yes we were!
5. Hit the Mindil market and watch the sun set over Fannie Bay. The market happens Thursday and Saturday nights during the dry season and includes handicrafts, local produce, and food carts. It was a bit like taking an aisle of Portland's Saturday market and plopping it down onto Cannon Beach. The night we visited was the last night of the season and the locals were out in hoardes for the fireworks show... 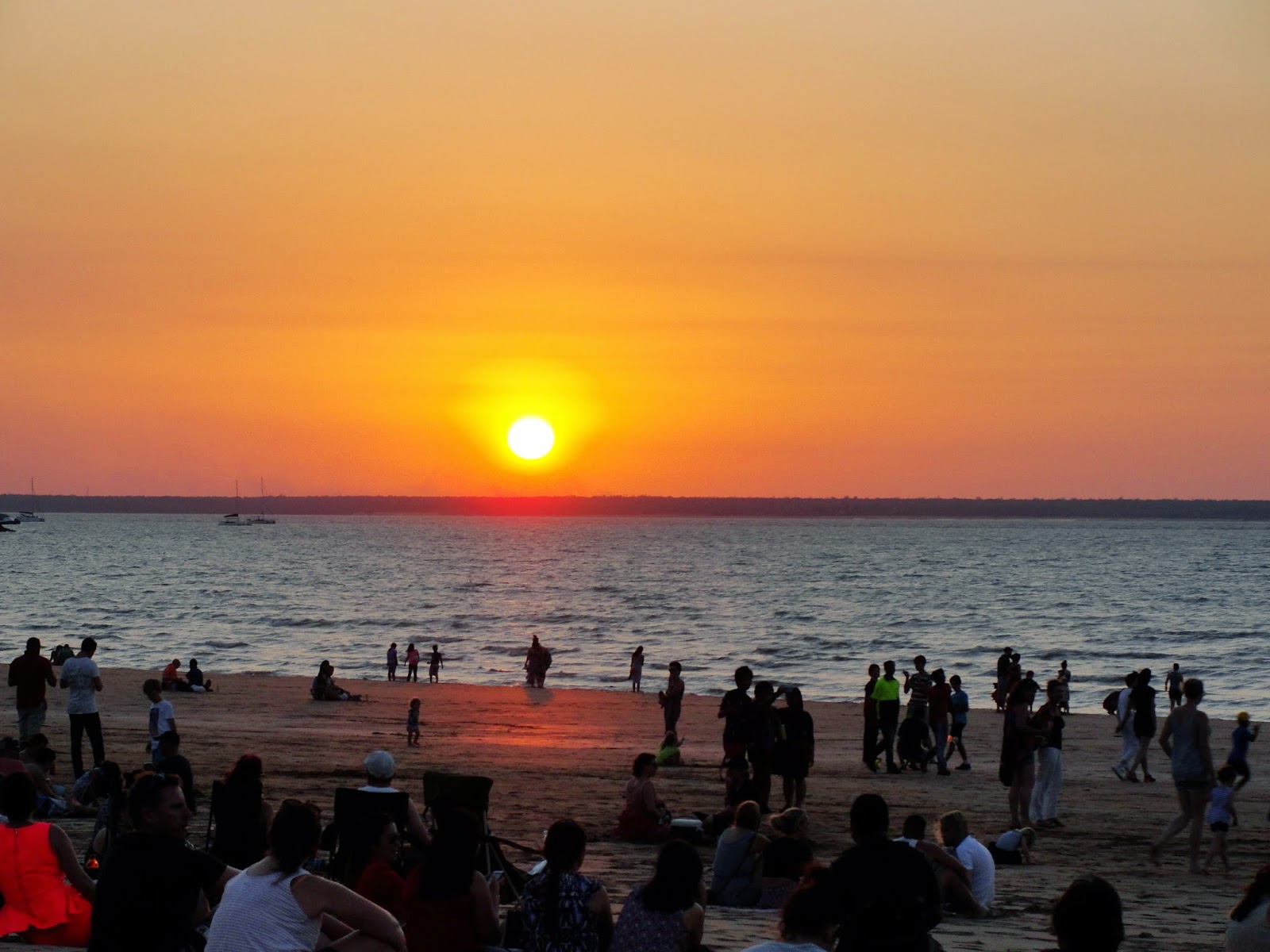 we prefer nature's firework show
Food notes: as with Fremantle, we weren't really interested in paying $15/person for lunch so we hit the local supermarket. We did splurge a bit at the market for dinner, if $20 can really be called a "splurge", where we enjoyed some local treats as well as so-so Thai food from a few of the stalls. (Once you've had the real thing, the rest just isn't the same...!) 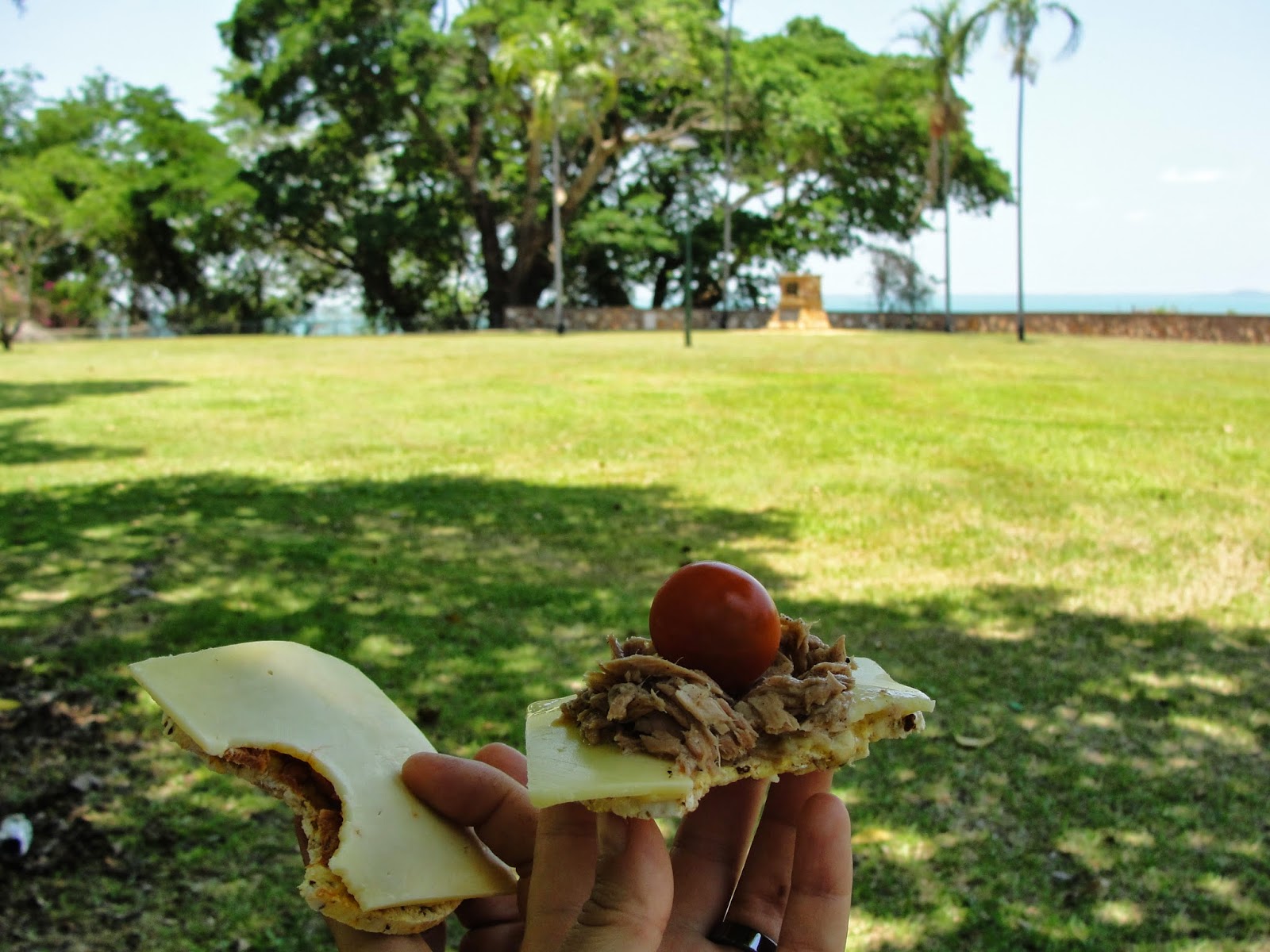 picnicking on the Esplanade 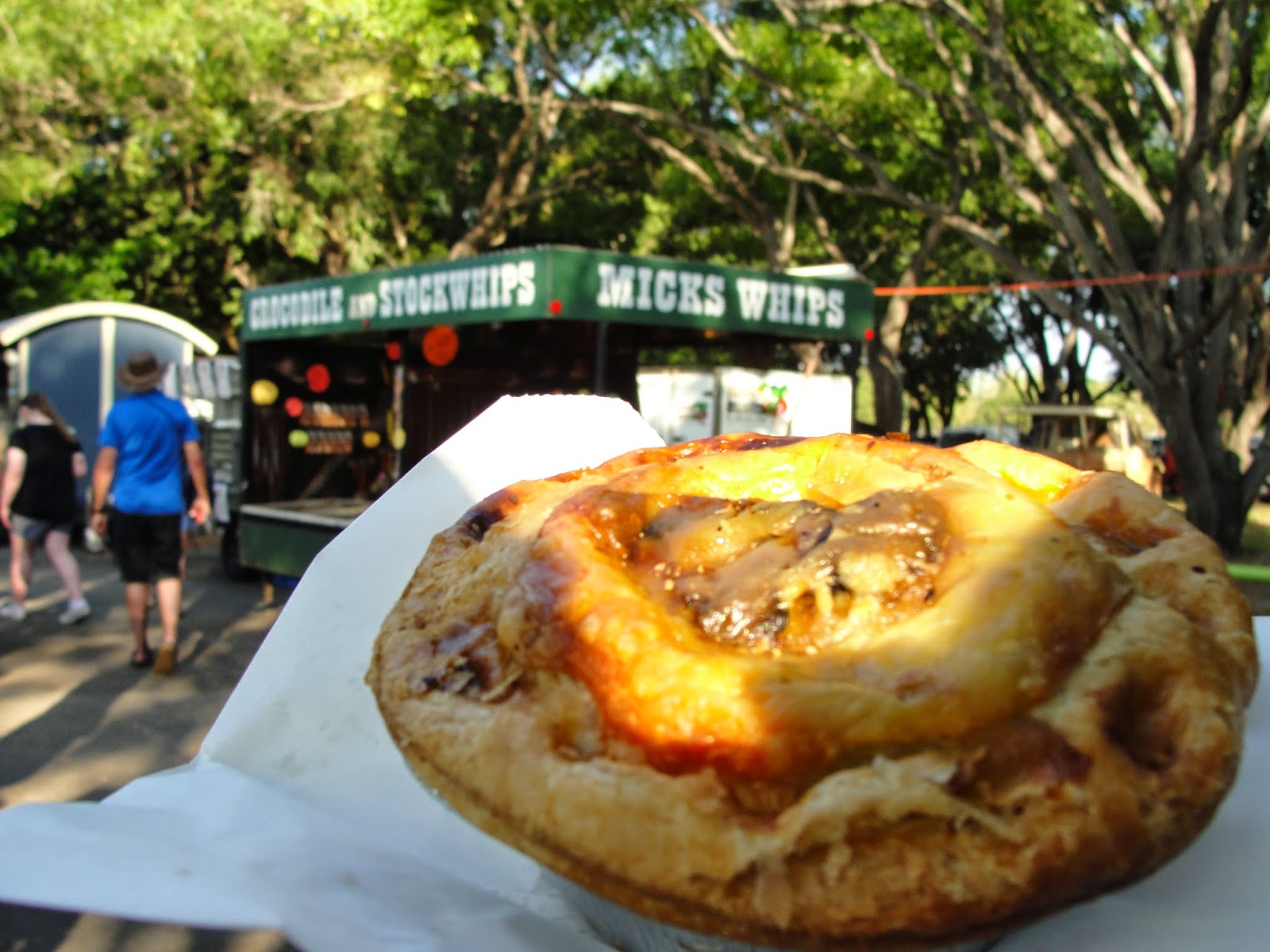 Patrick's first meat pie
Lodging notes: luckily, we were WWOOFing just outside of Darwin where we had a comfy private room all to ourselves. 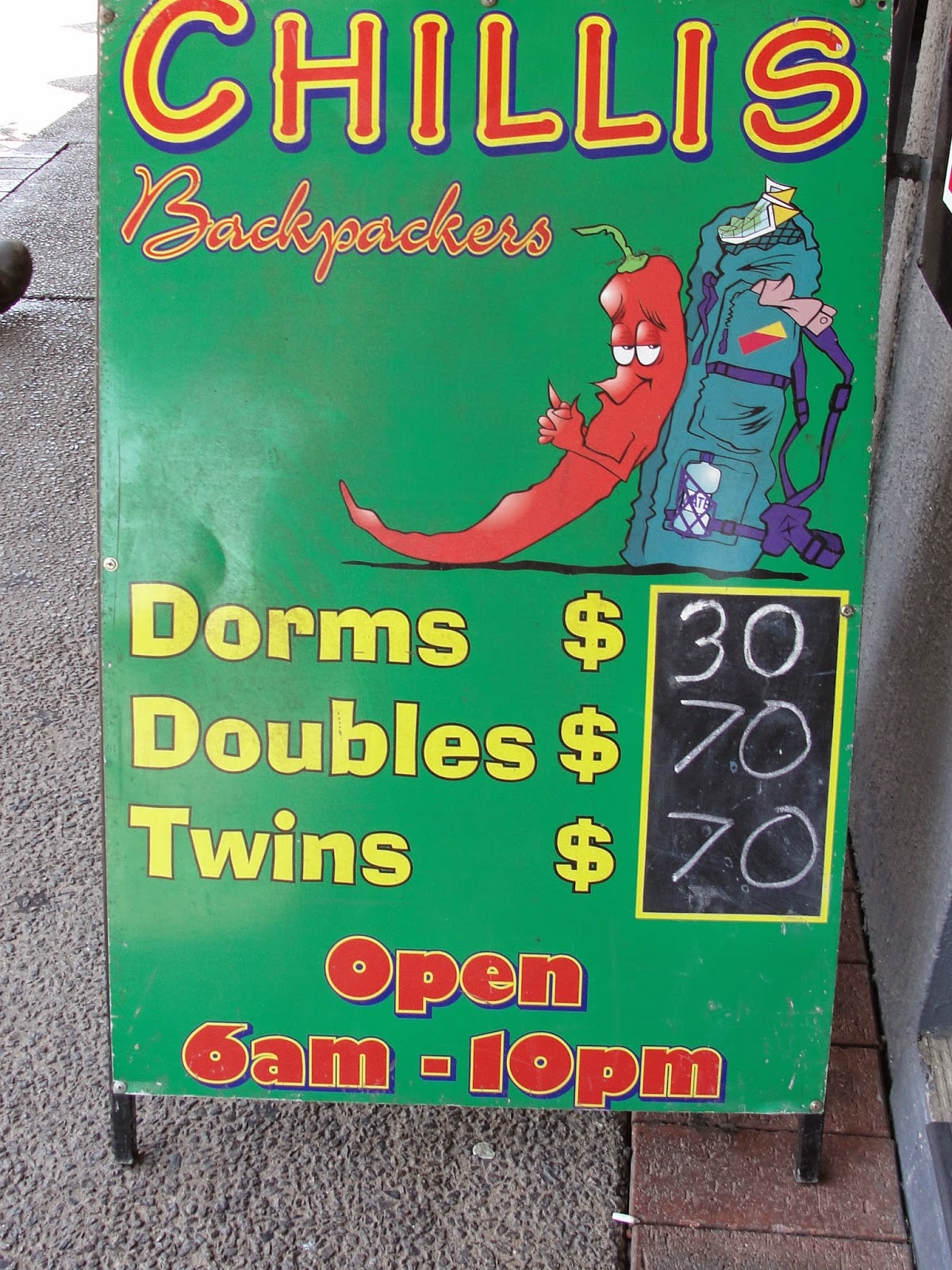 hey, remember when dorm beds were $4/person/night?
Downtown Darwin is accessible and pleasant with lots of history (both happy and tragic). It was bloody hot and we were on foot so a day there was plenty for us. WWII buffs with an A/C car could probably hang out a bit longer... 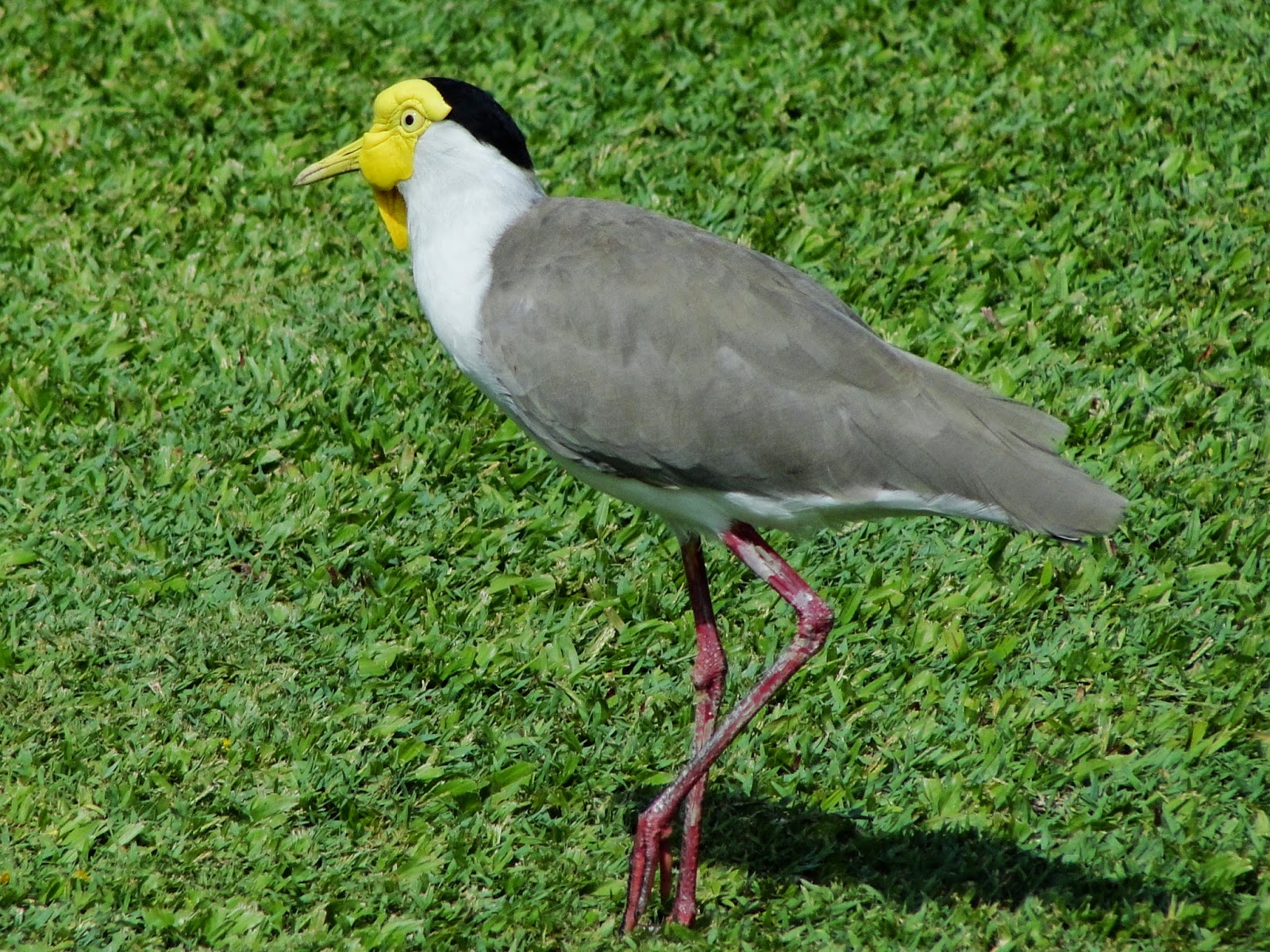 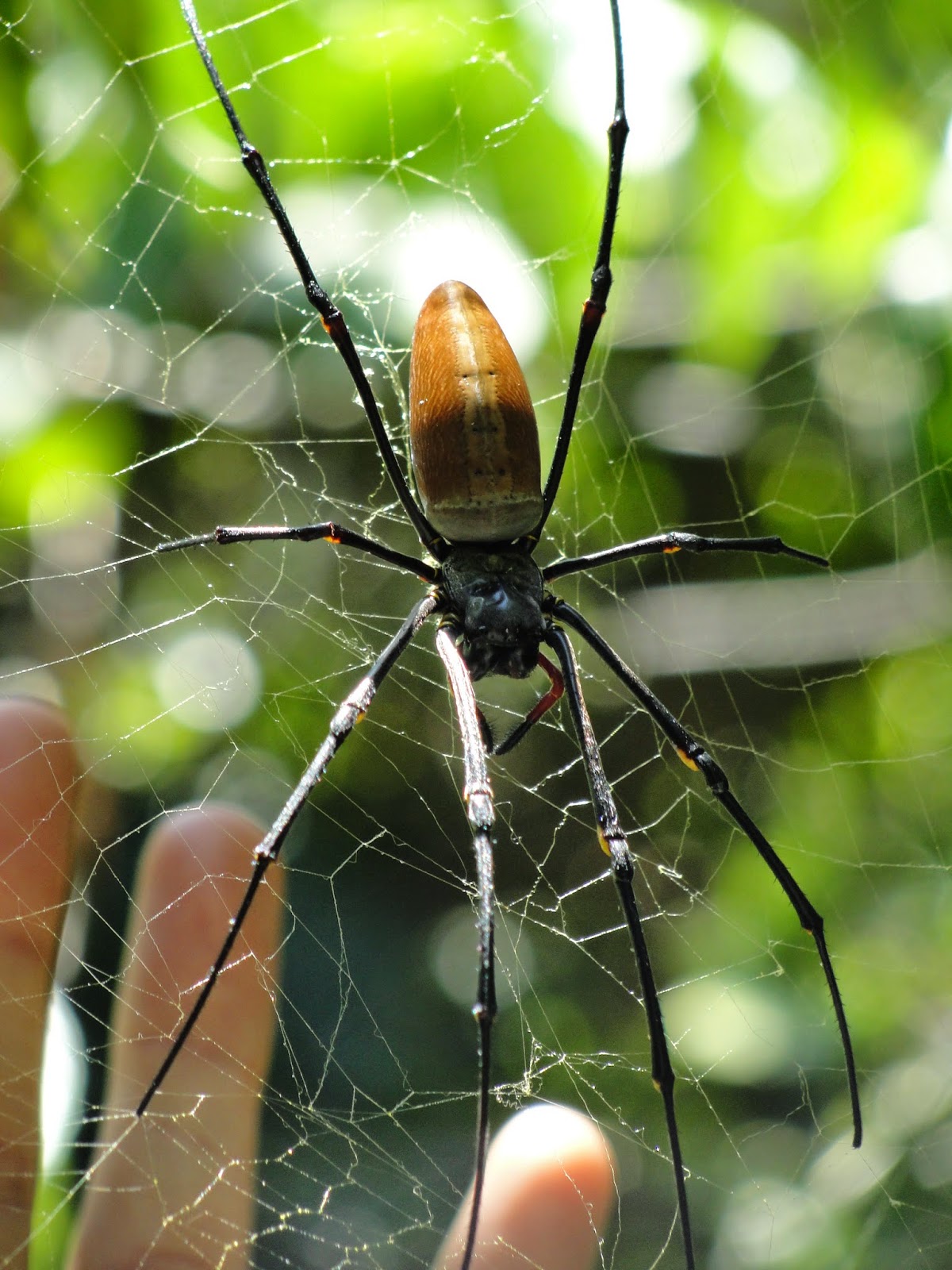 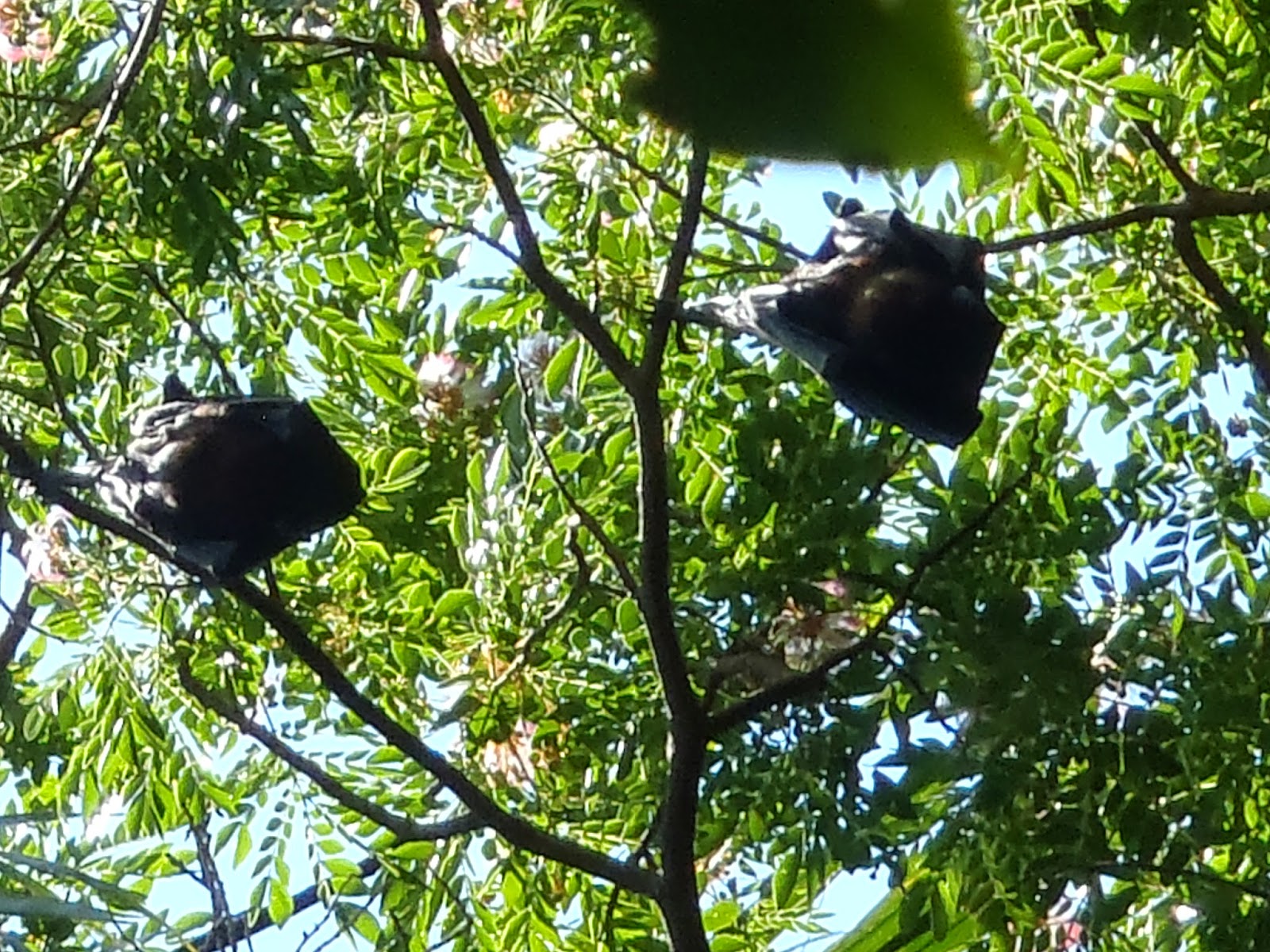 That said, one week in and around Darwin wasn't enough. Someday we'll come back during the wet season to see more of the outback. But the visa clock is ticking, so it's back to Adelaide!
Posted by Jen
Email ThisBlogThis!Share to TwitterShare to FacebookShare to Pinterest
Labels: australia, Friday five