Over three separate days we visited the ruins of at least 50 wats in the Historical Parks of Sukhothia ("sook-oh-tie"), Si Satchanalai ("see satch-an-a-lai") and Kamphaeng Phet ("cam-pang-pet"). We don't want to write about 50 wats any more than you want to read about 50 wats. But we really enjoyed our visits and want to share some highlights, so in the spirit of the Ephesus vs Hierapolis post here's a brief recap of our ancient ruins triple-header.

(We can't begin to do justice to the different architectural styles and blendings of cultures that formed each of these sites - Burmese, Khmer, Thai, Sri Lankan, Indian, we even saw a gate that looked strangely Roman - but ye olde internet has heaps of information on this if you're interested.)

Let's start with the Buddhas since the symbolism is pretty self-explanatory. The 50 wats we visited contained relics of at least 150 Buddhas. Some were pristine, some were reconstructed, some were falling apart (headless, feetless, armless, legless or some combination of those). Some were standing, some were sitting in various poses, some were walking, some were lying down. Some were massive, some were small. Okay, you get the picture. The ones in the forests were our favorites because they were so serene, but the massive ones were pretty amazing too. Here are three of the more massive Buddhas and/or Buddha sites with a little perspective: 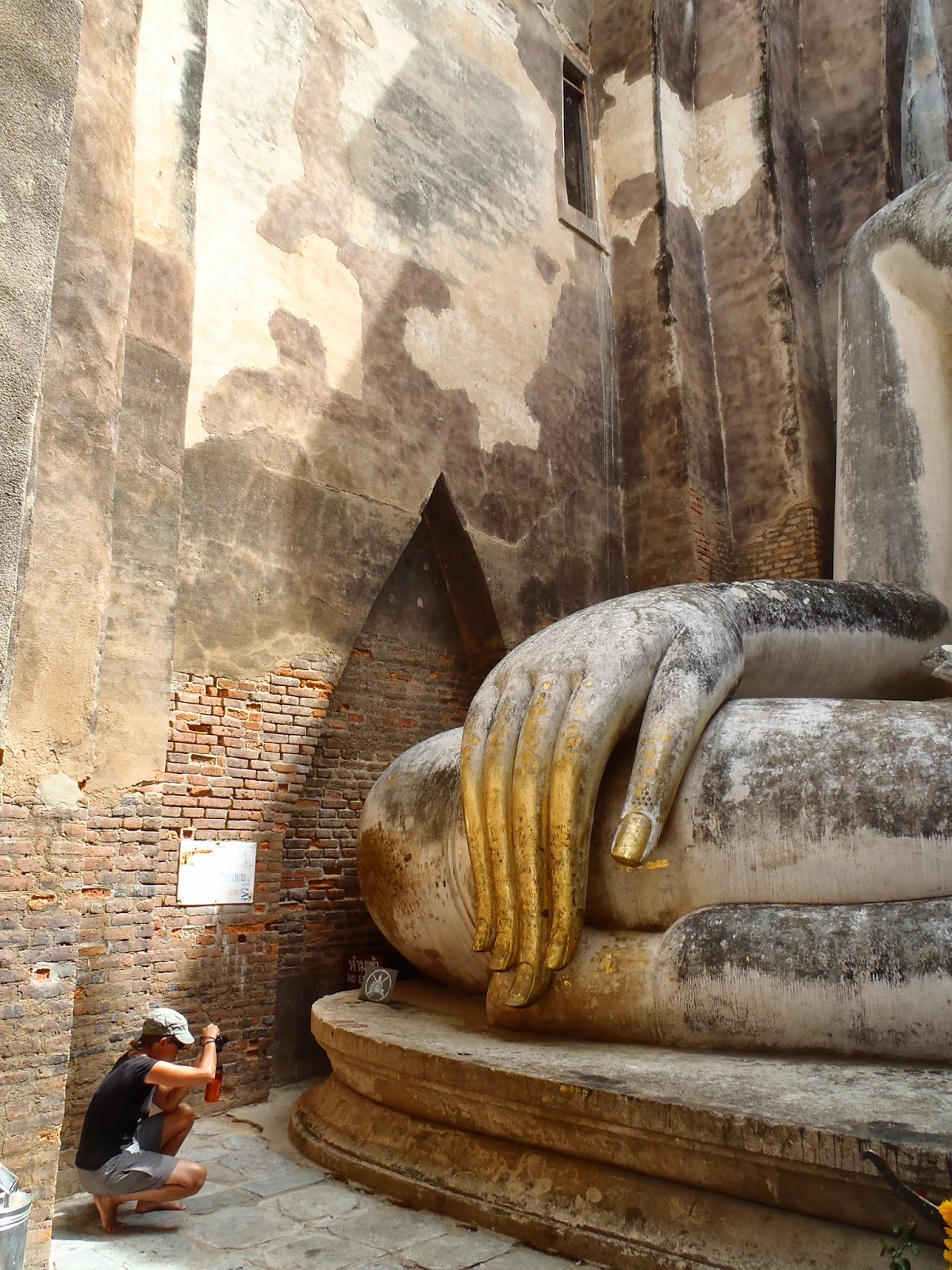 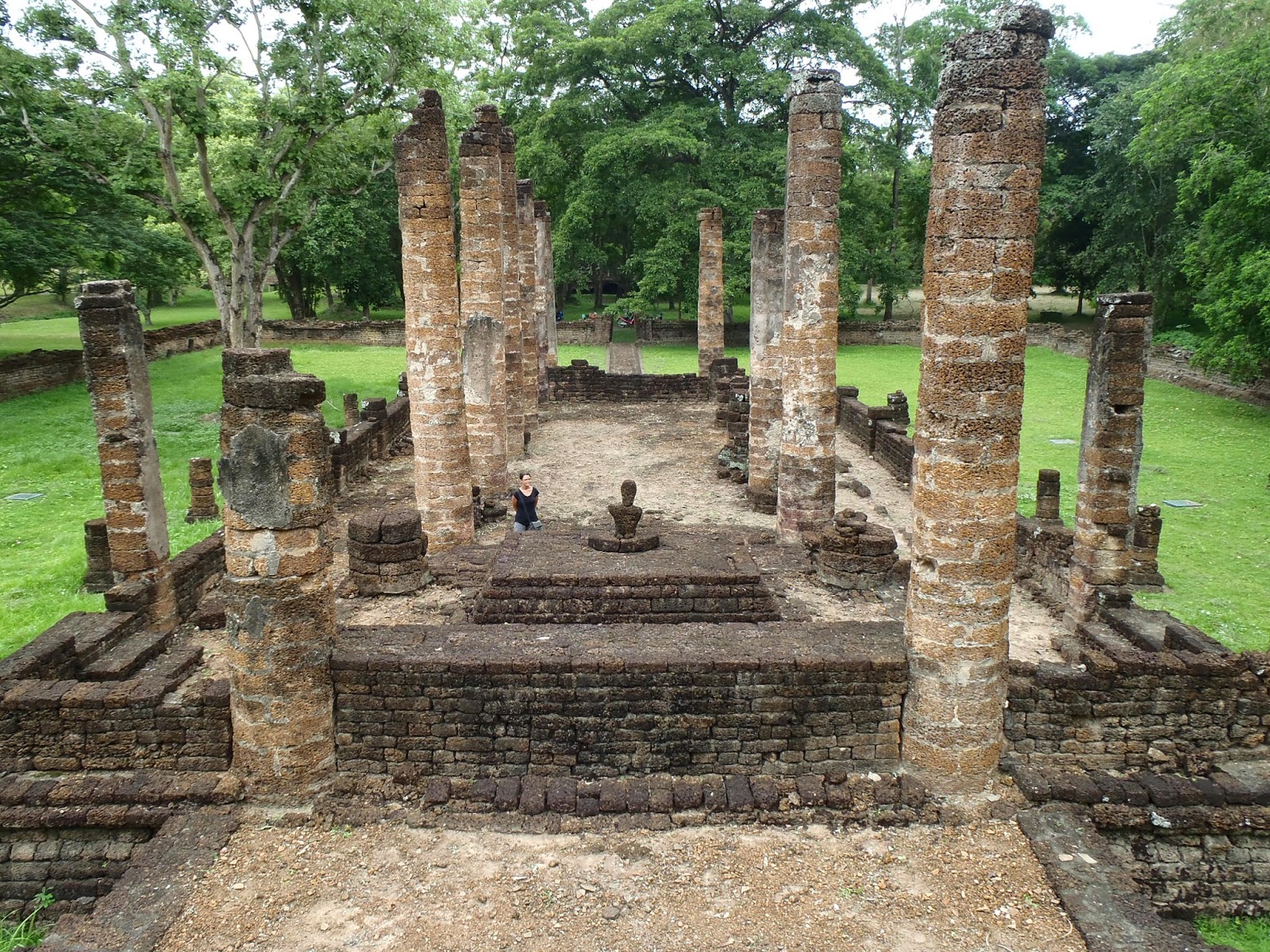 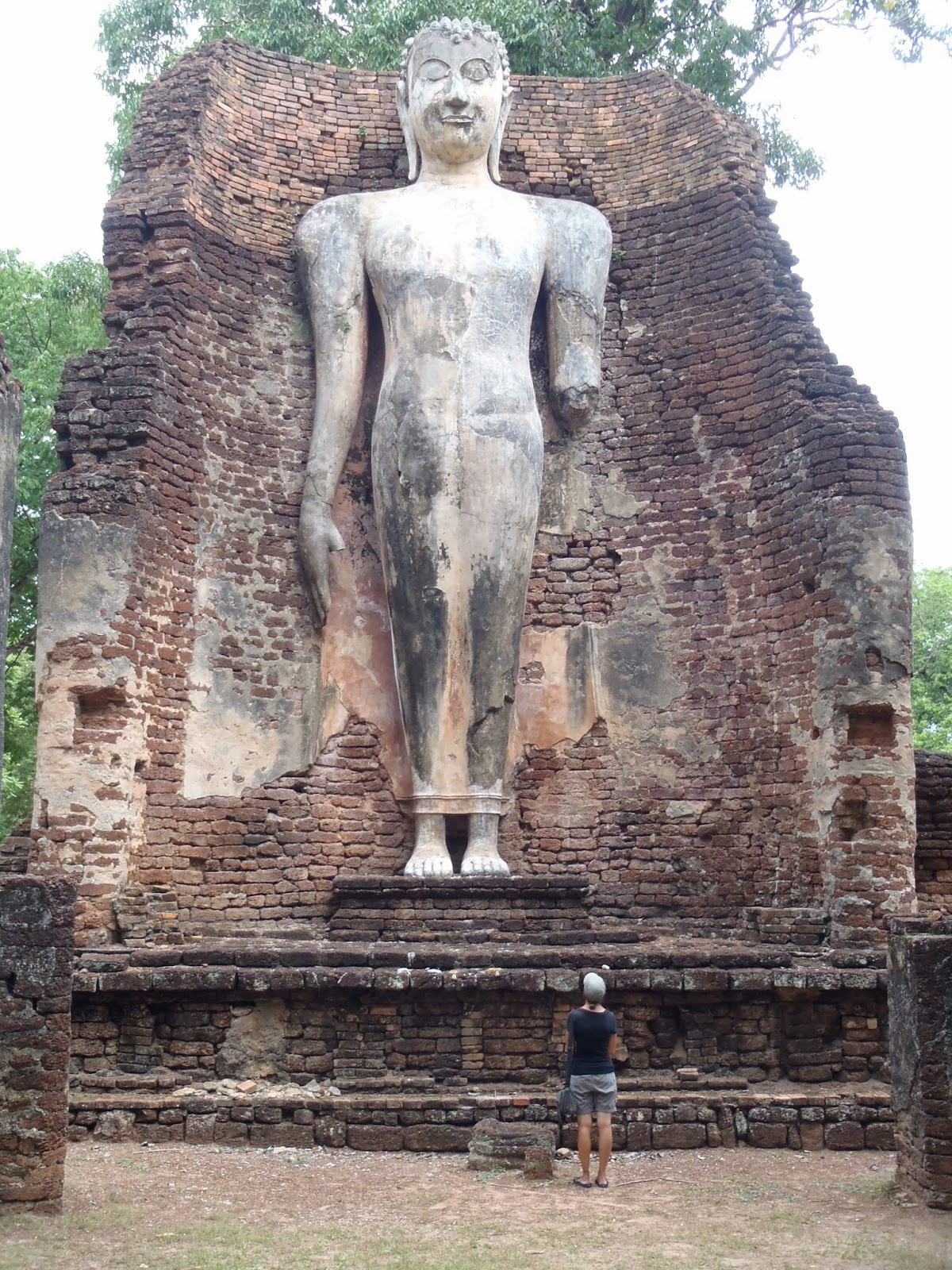 Kamphaeng Phet's Wat Phra Non
(stunning giant standing Buddha)
Next up: the elephants. Elephants are very symbolic in Buddhism, particularly white elephants which signify mental strength. (Click here for a story on how the elephant came to be symbolic.) Several wats were adorned around the circumference with elephant sculptures in various stages of destruction/reconstruction. Many had 32-36 elephants around the circumference and a few had almost 70! No matter the state, the carvings were amazing. 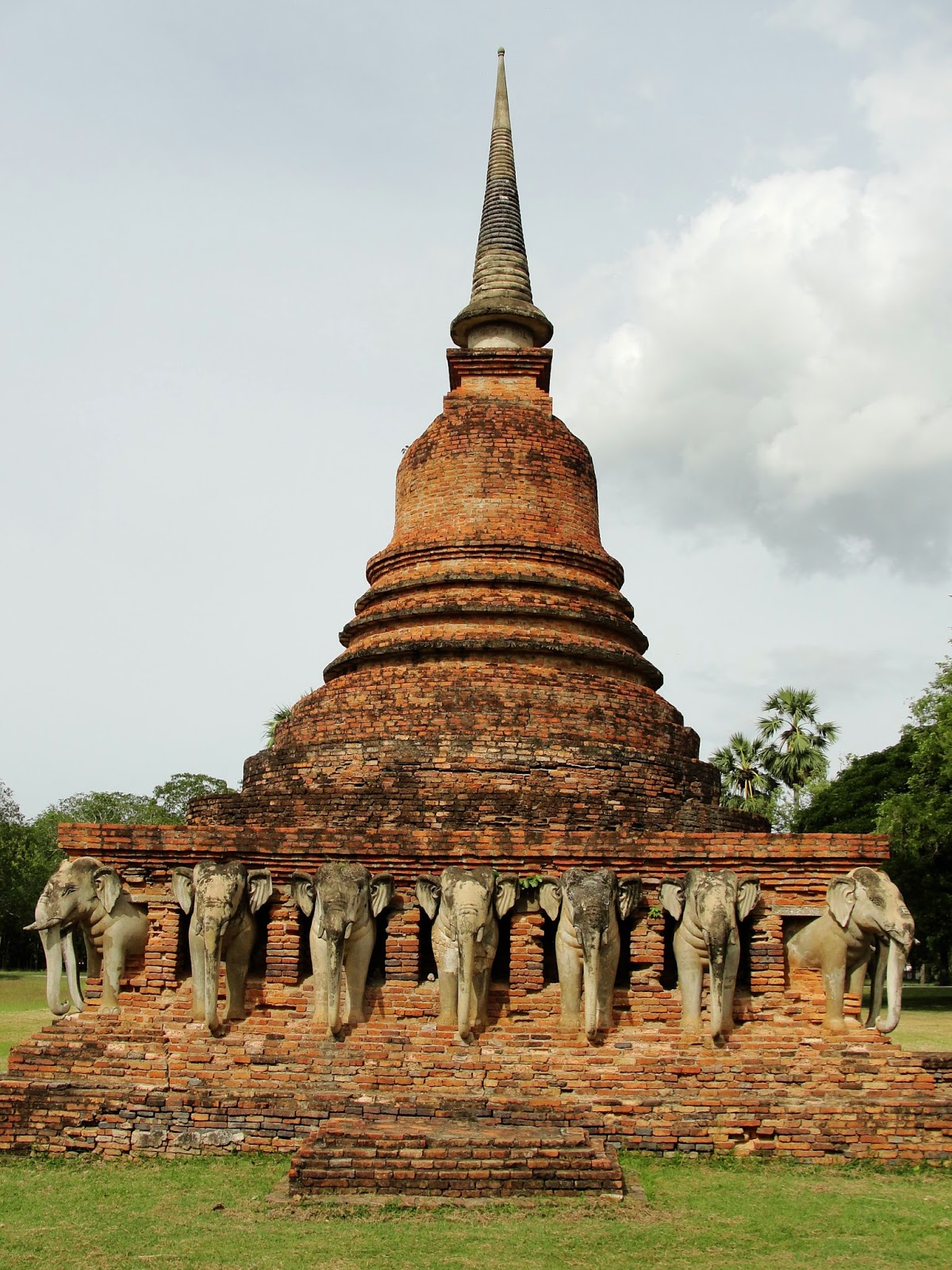 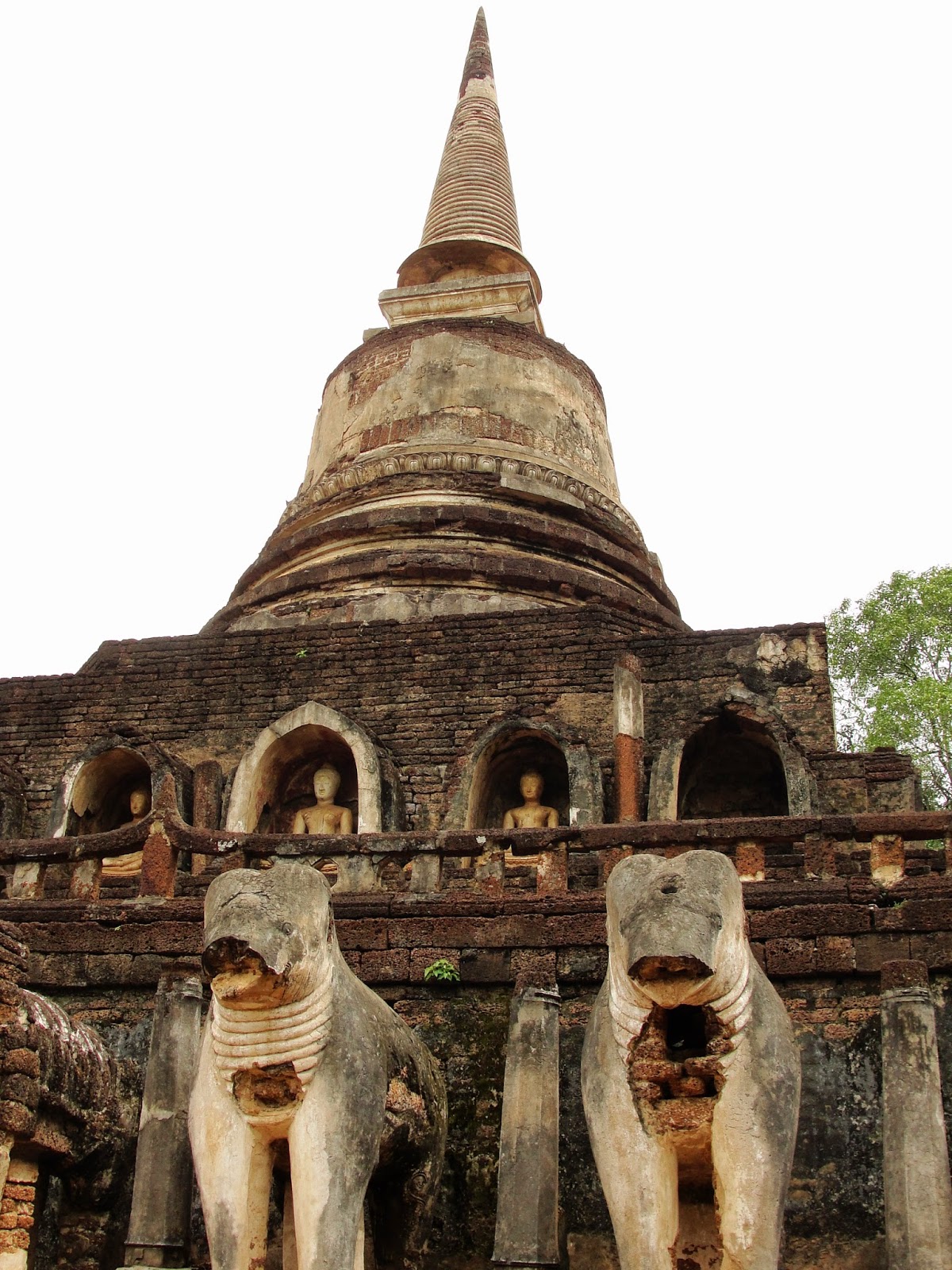 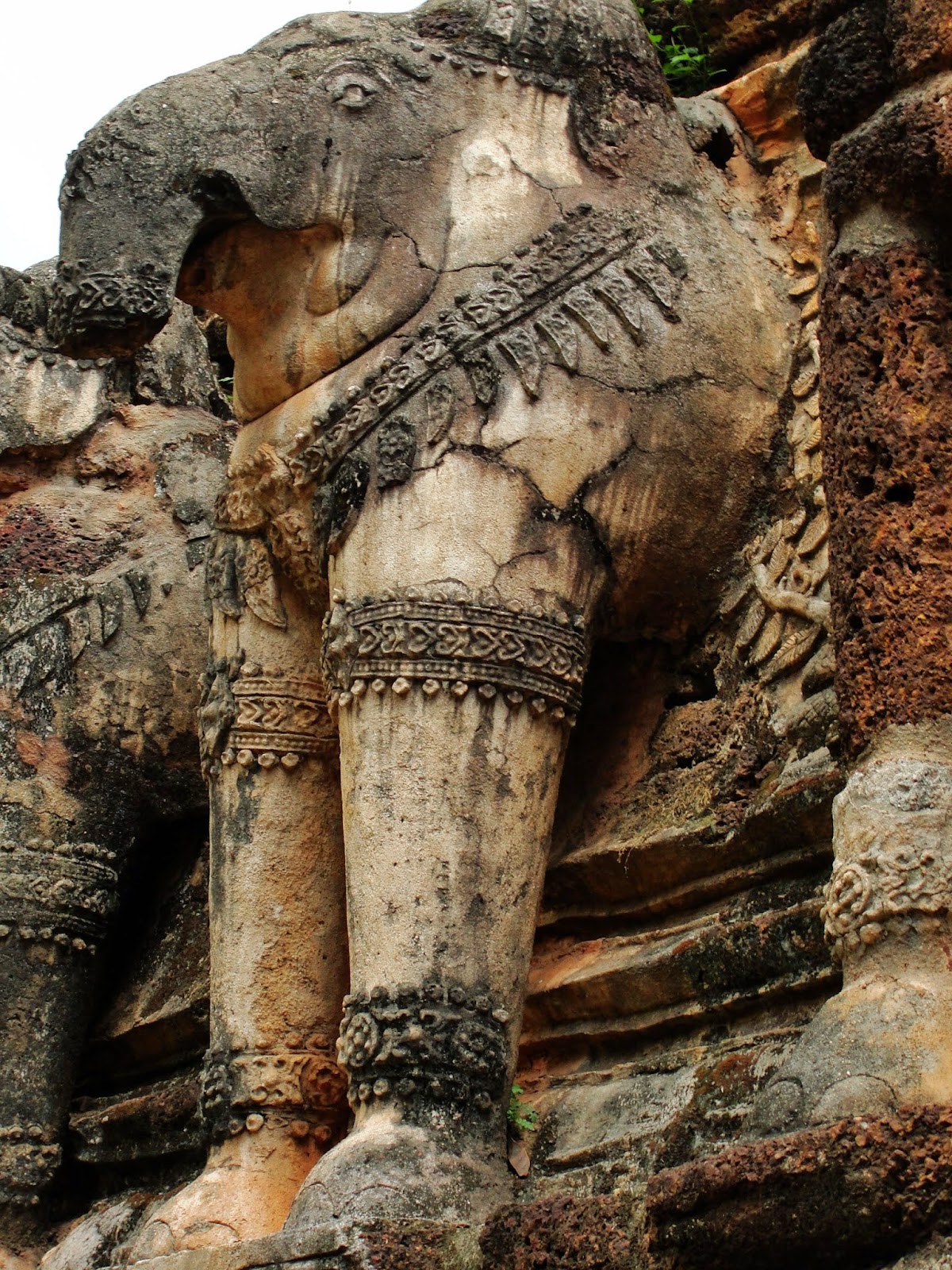 Kamphaeng Phet's Wat Chang
Moving on to the chedi, or stupa - this is a holy monument where sacred things get buried. In some cases it's monks' ashes, in other cases it's allegedly a piece of Buddha's body (as was also the case with That Luang in Vientiane). Some wats have one chedi, some have multiple, and this one has 33 and an explanation of the different chedi shapes in the photo description. Not sure what the tallest chedi was, but we'd guess on average they were about 12-15 meters high. Architecturally, they're quite amazing. Here are a few of different styles: 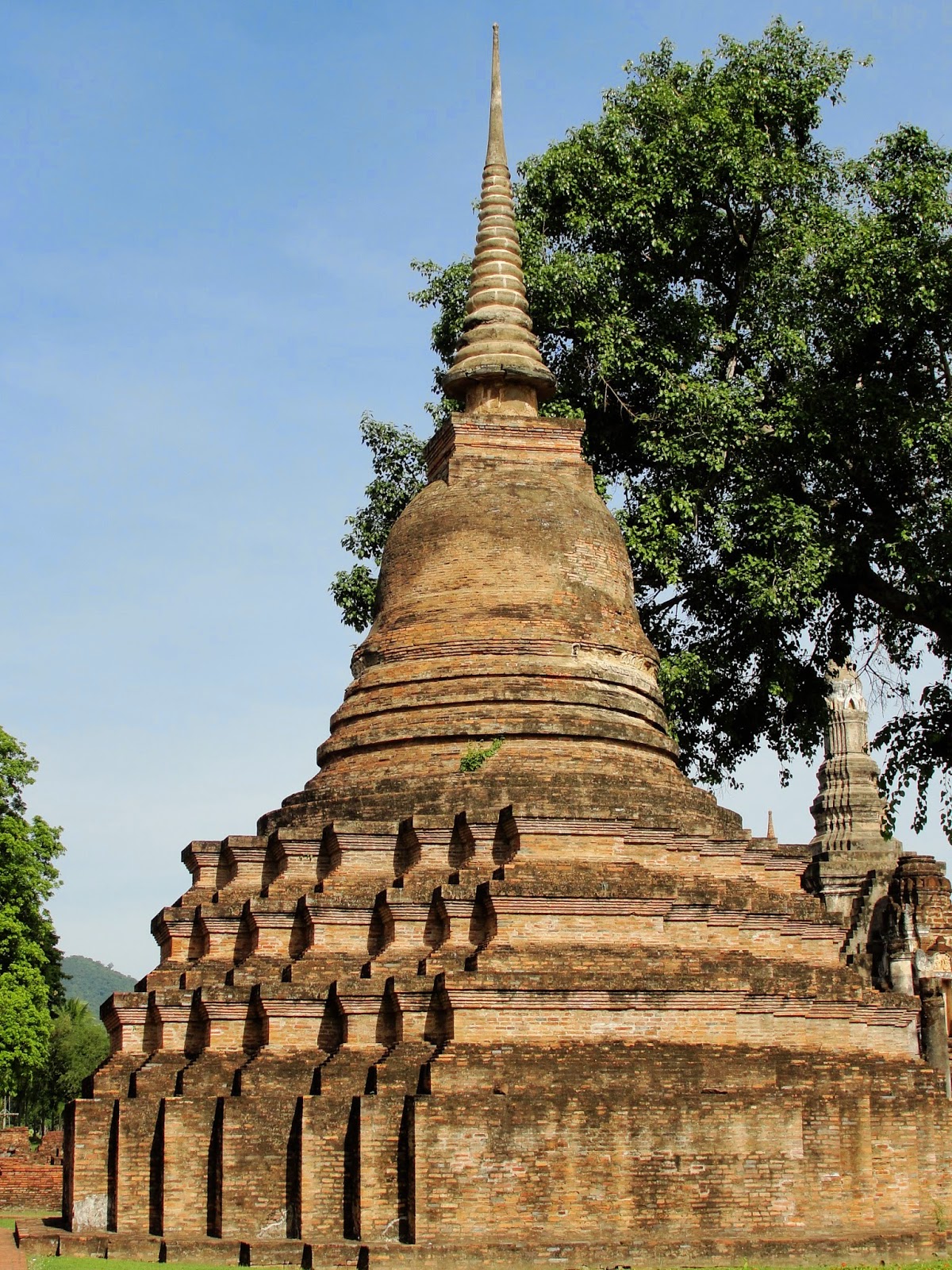 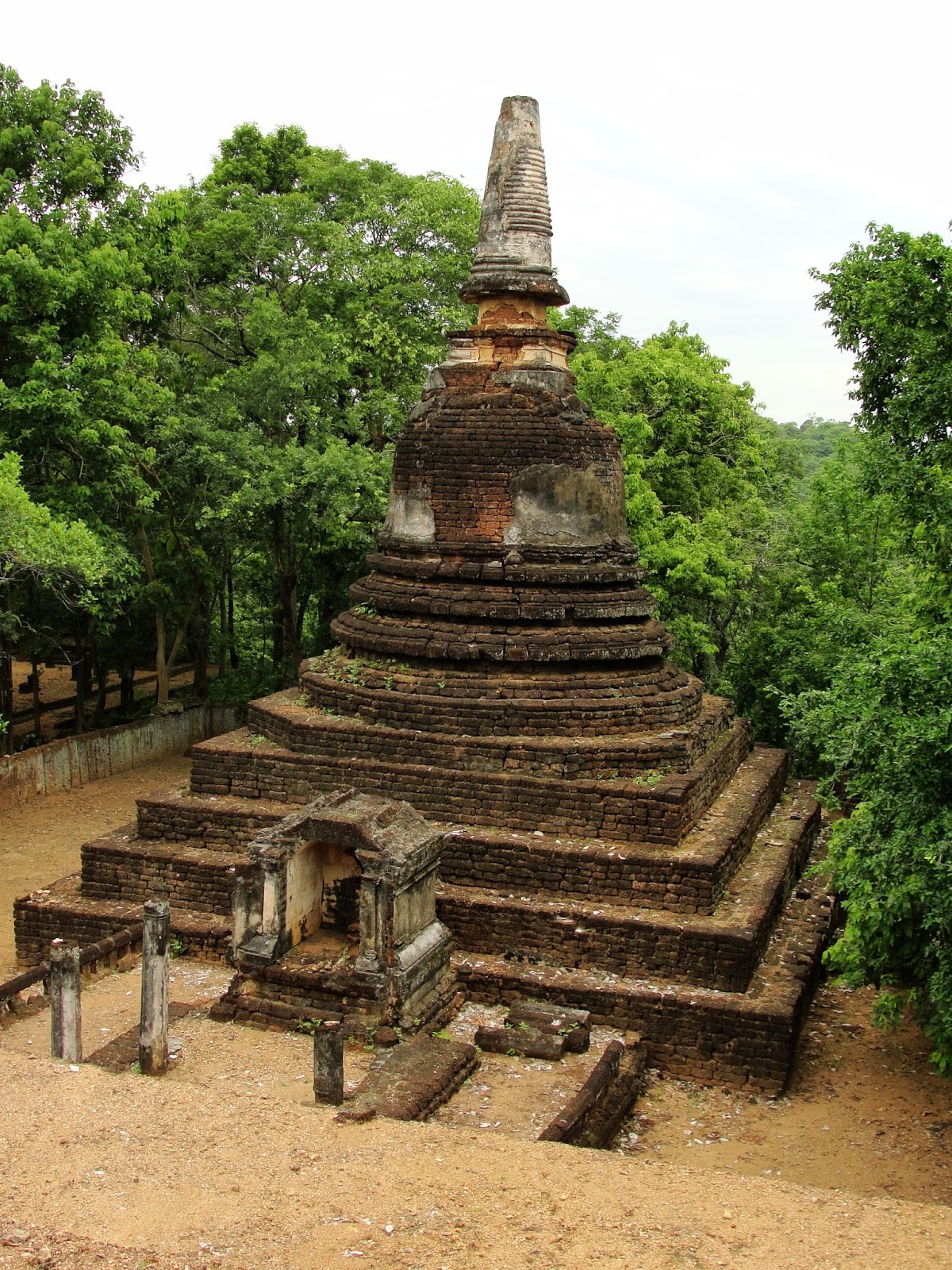 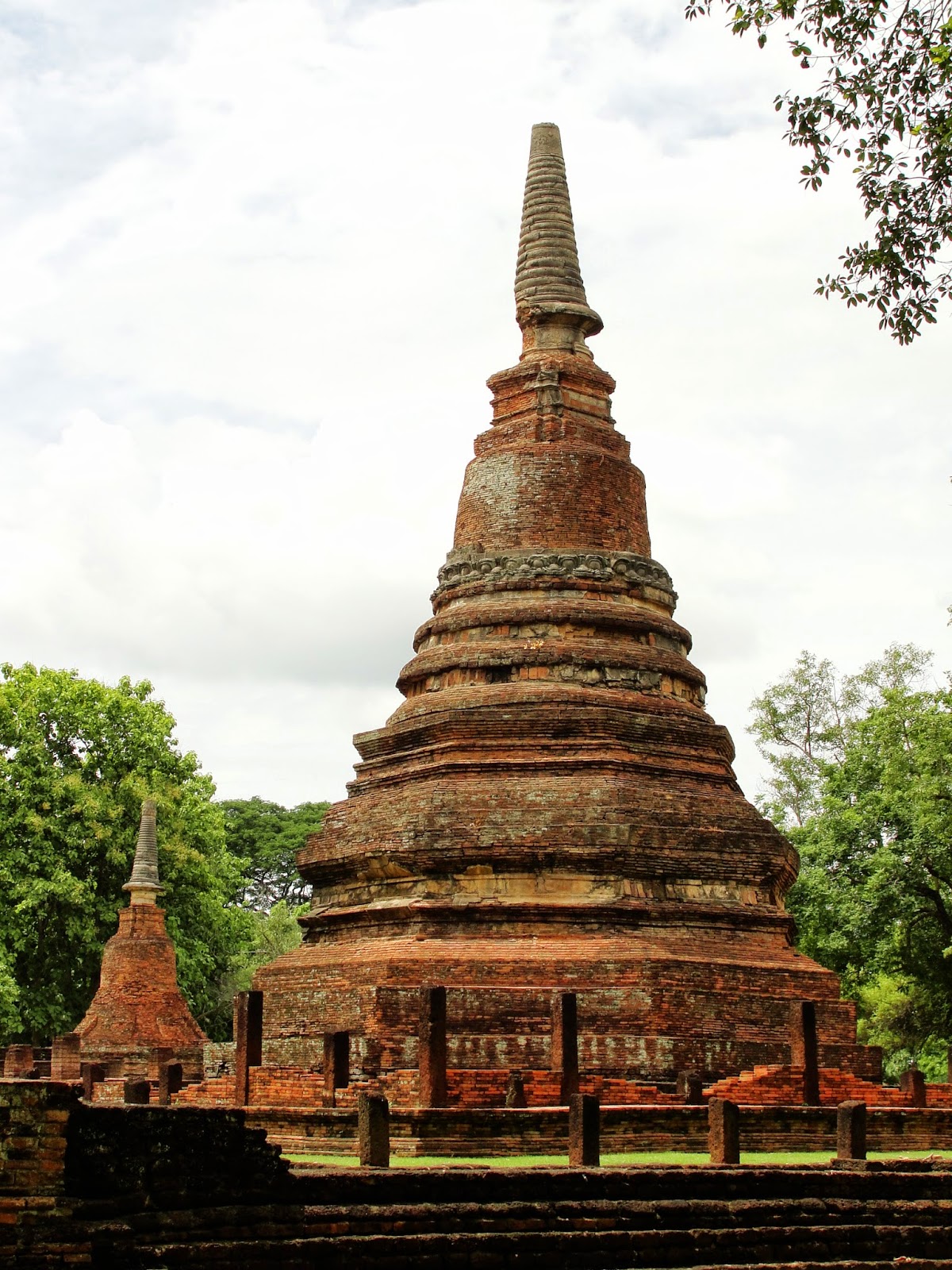 Kamphaeng Phet's Wat Phra That
As far as ambiance, Sukhothai was the biggest and also the busiest. Thankfully we took some online advice and headed for the remote, rustic west side of the park where we only ran into a few people over a few hours before heading back into the mayhem. Similarly, Si Satchanalai (not as big as Sukhothai, but still pretty big) had tour buses milling about the more popular sites but no one in the remote areas. Kamphaeng Phet was the smallest site and definitely our favorite. There were very few tourists and the locals use the peaceful, beautiful park for exercise so we got a lot of friendly "sawadee ka/kop's". Kamphaeng Phet was also the only site to have an entire wat complex, complete with dozens of former monk lodgings and speculative signage on on how/why each house was arranged, which we really had fun exploring until the red ants started reclaiming their territory. 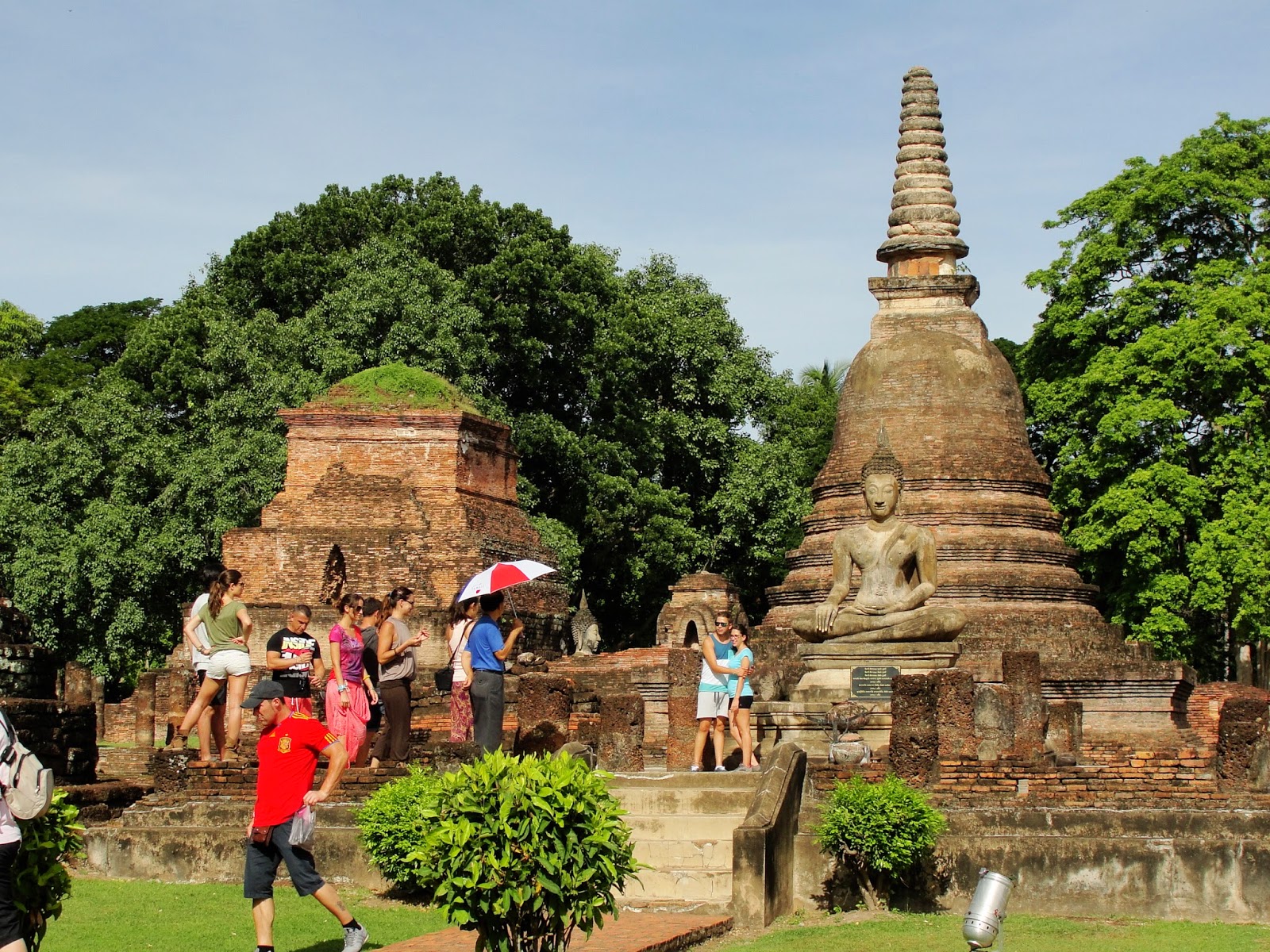 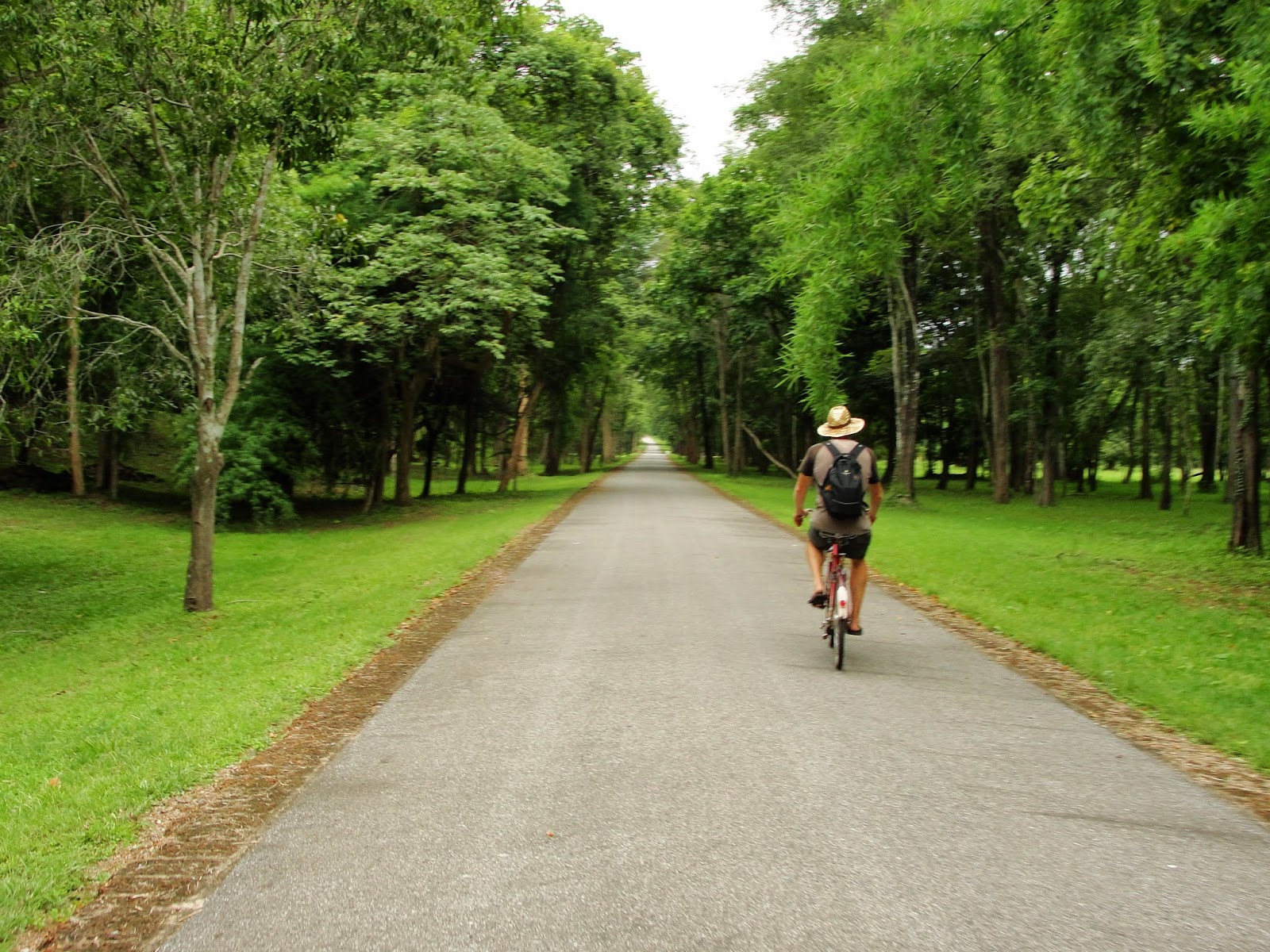 a quieter moment at Si Satchanalai 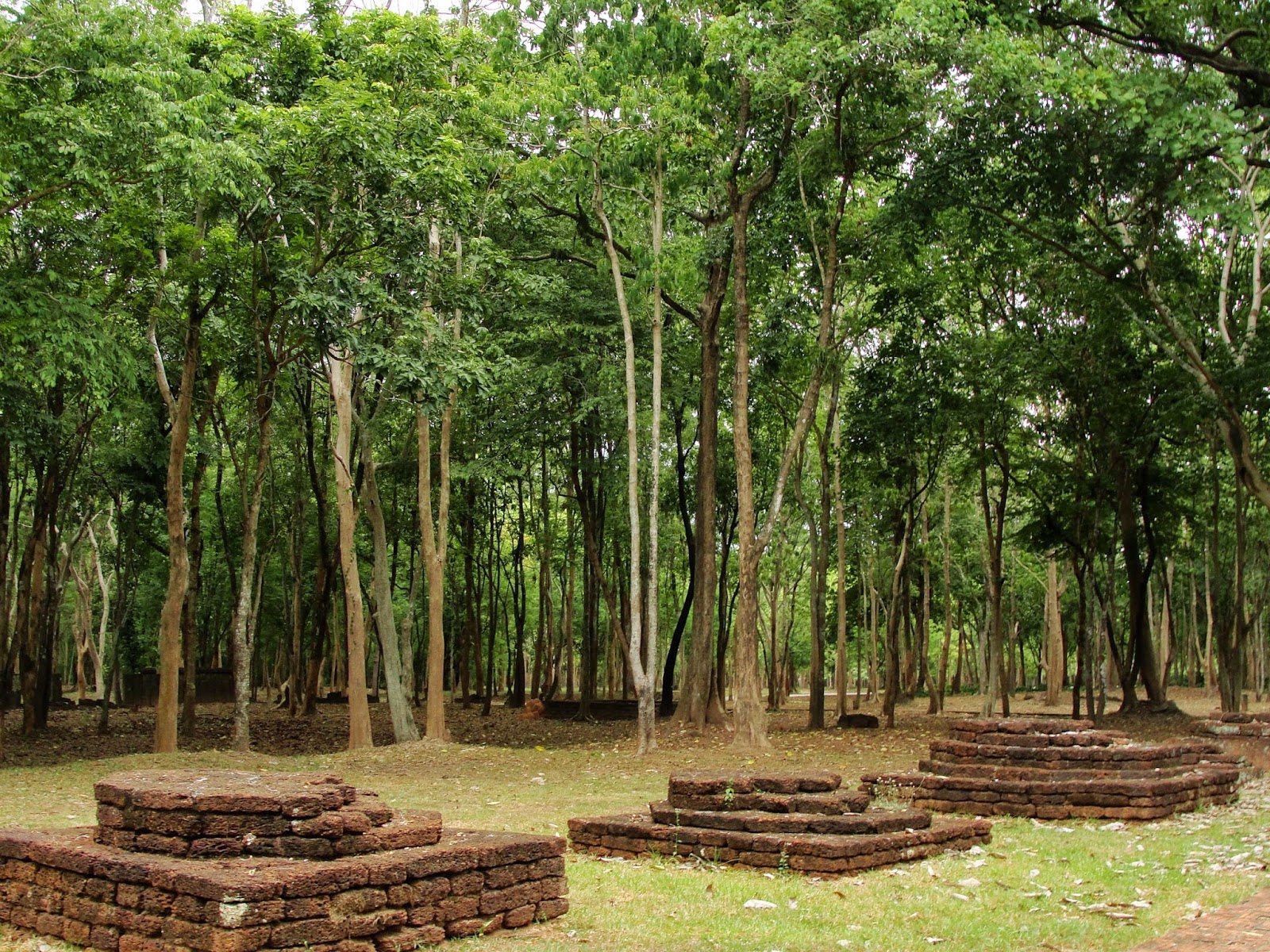 rustic Kamphaeng Phet
And finally, biking around all the sites is the easiest way to see everything. Leave us a comment and tell us which photo gets your vote for best bike spot! 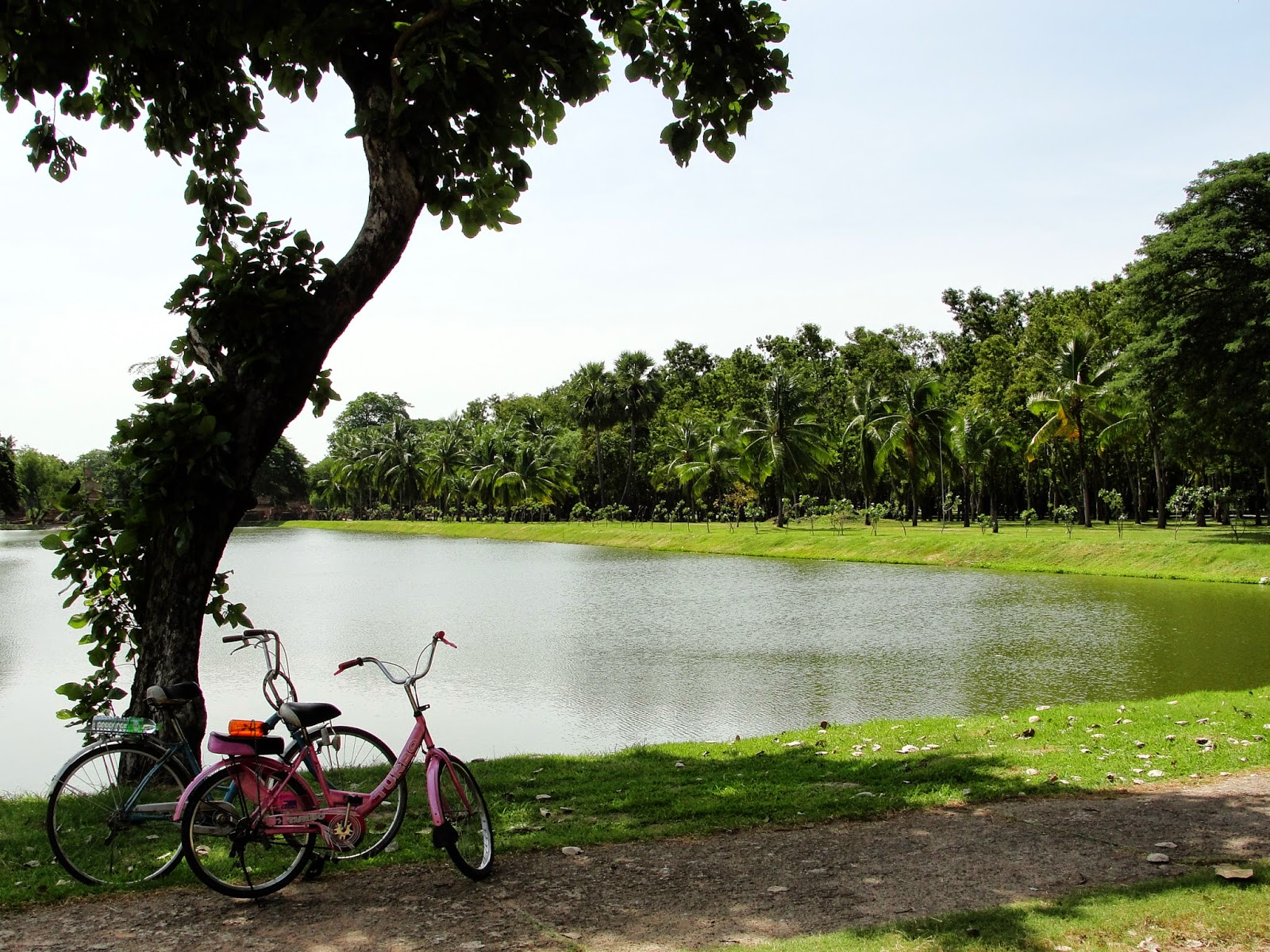 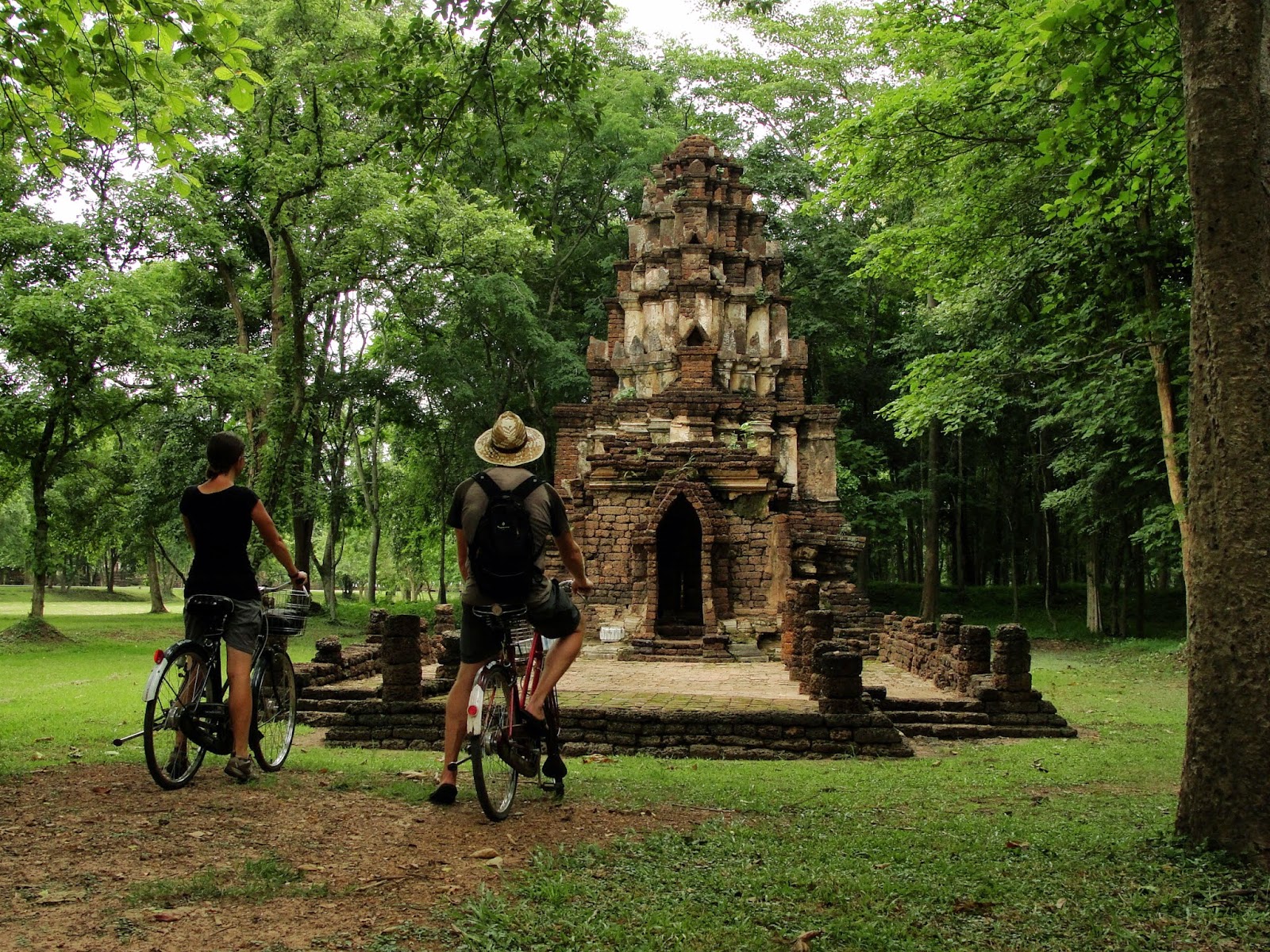 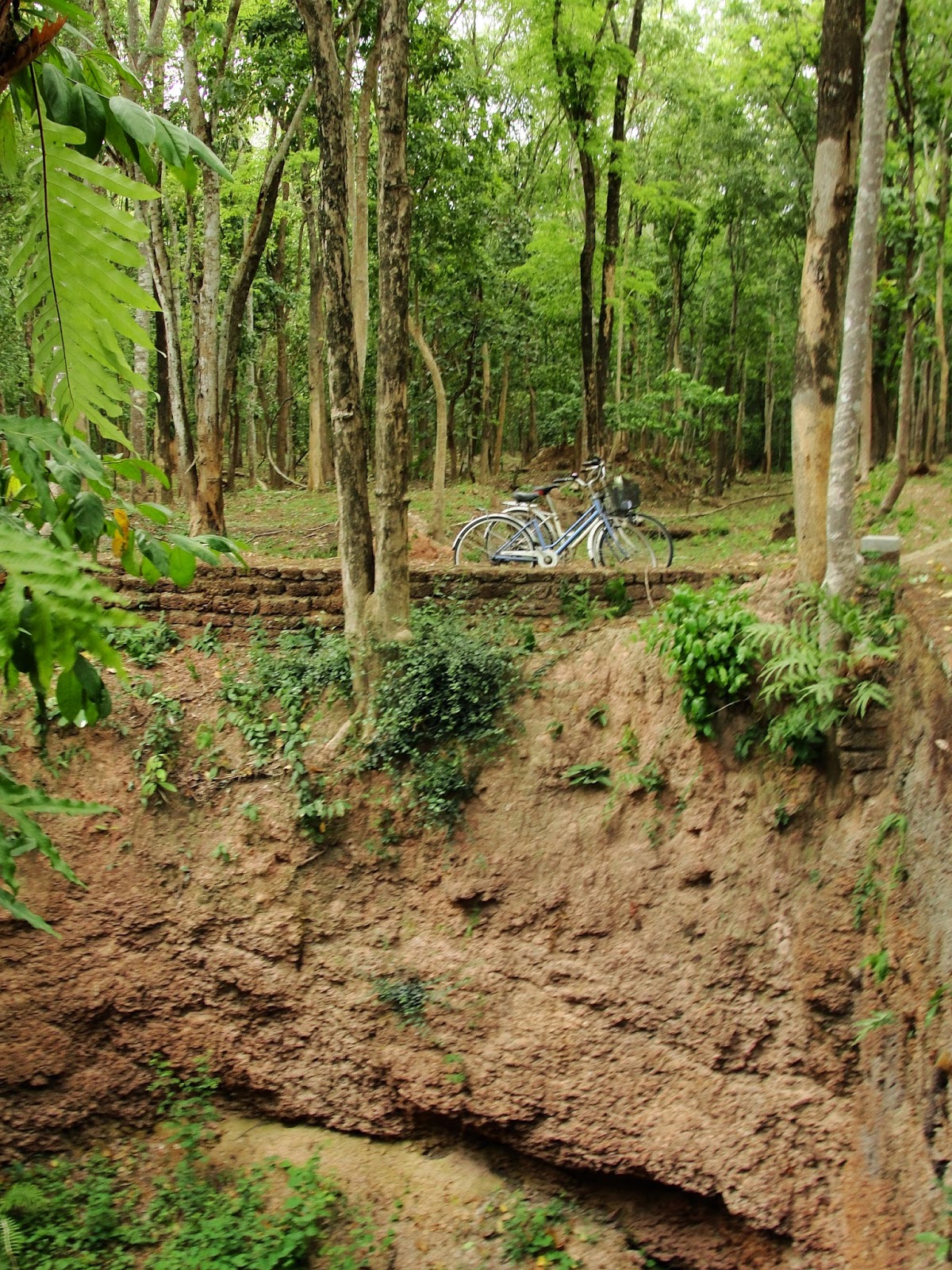 Kamphaeng Phet's Thirty Thousand well
Ancient ruins masochists can view the full set of pictures from all three sites starting here. Some of the more interesting explanatory text from the signs has also been transcribed for your reading and learning pleasure. (It's verbatim, so have fun...)

The ruins were very different than anything we'd done in Thailand up to this point. We also enjoyed the towns where we stayed. Sukhothai (where we spent four nights as it's a jumping off point to Si Satchalanai) sees a lot of tourists, but many are Thai so it didn't really feel like a tourist town unless we were standing on "Farang Guesthouse Row". The ruins are the big draw there and other areas of town - the Saturday night market (complete with line dancing like we saw in Chiang Rai), the nice ceramics museum (totally empty on a Sunday afternoon), and the nightly food stalls along the main strip - were mostly farang-free.

But Kamphaeng Phet (where we spent three nights just because it's a nice little town) was the clear winner for us. The park itself was so calm and beautiful, but on top of that most tourists day-trip from Sukhothai so they don't get to experience the great night market or the riverfront at night. It was so nice to finally find a town where you could just sit outside and watch life go by, where there wasn't a "Farang Guesthouse Row", where locals looked suprised (but happy) to see you. 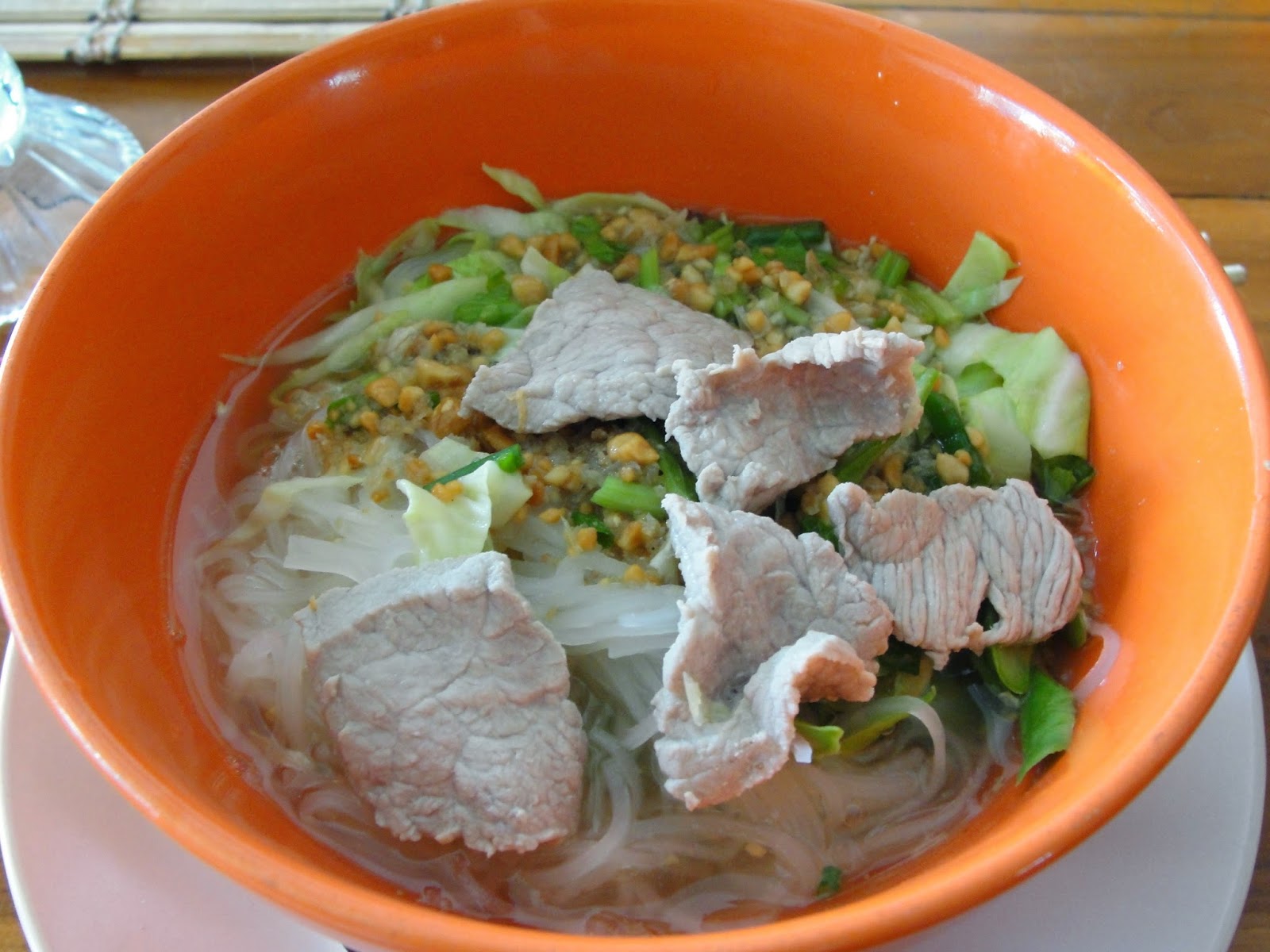 (they're sweet, it's weird) 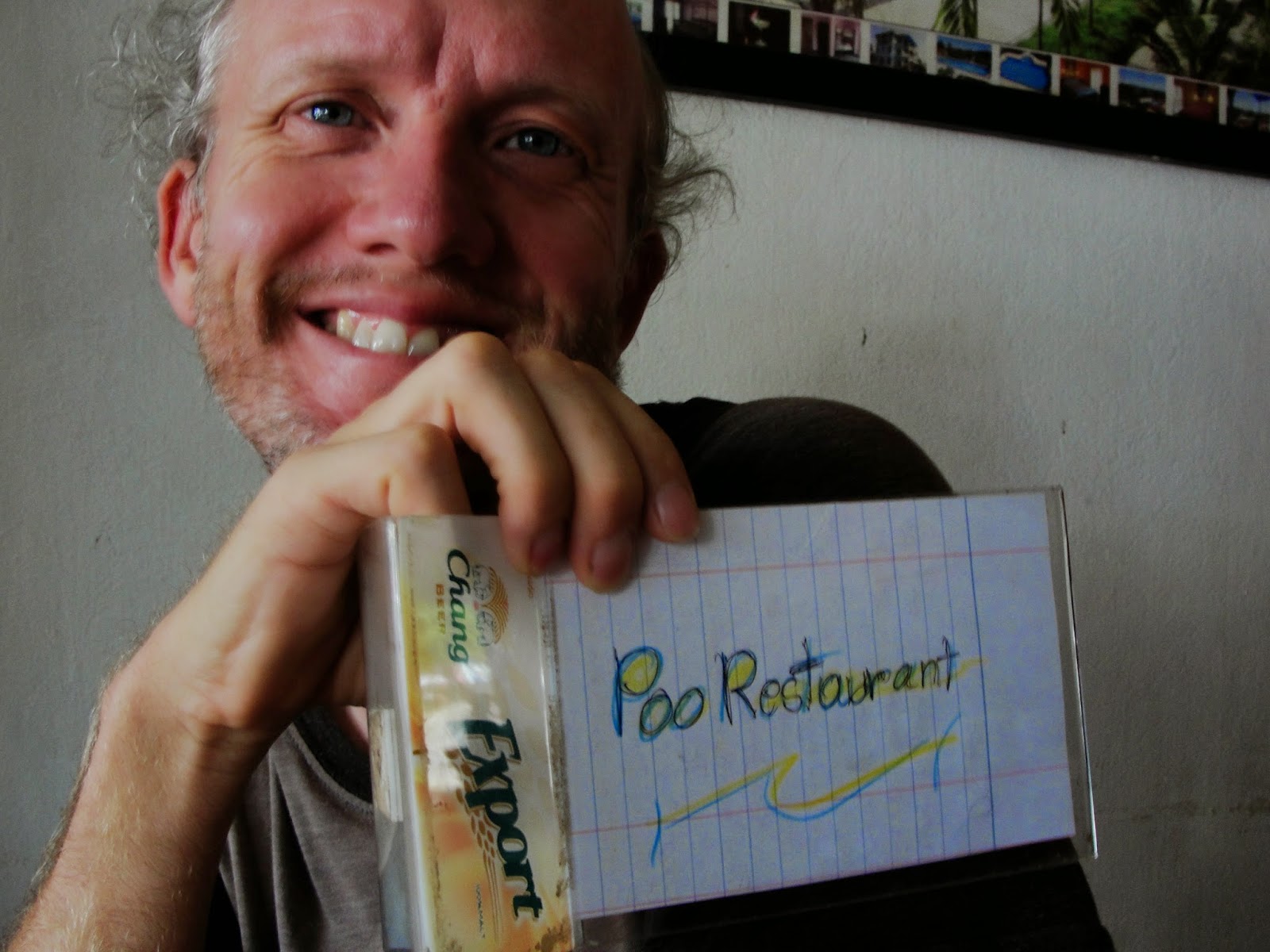 it does make a great photo op though 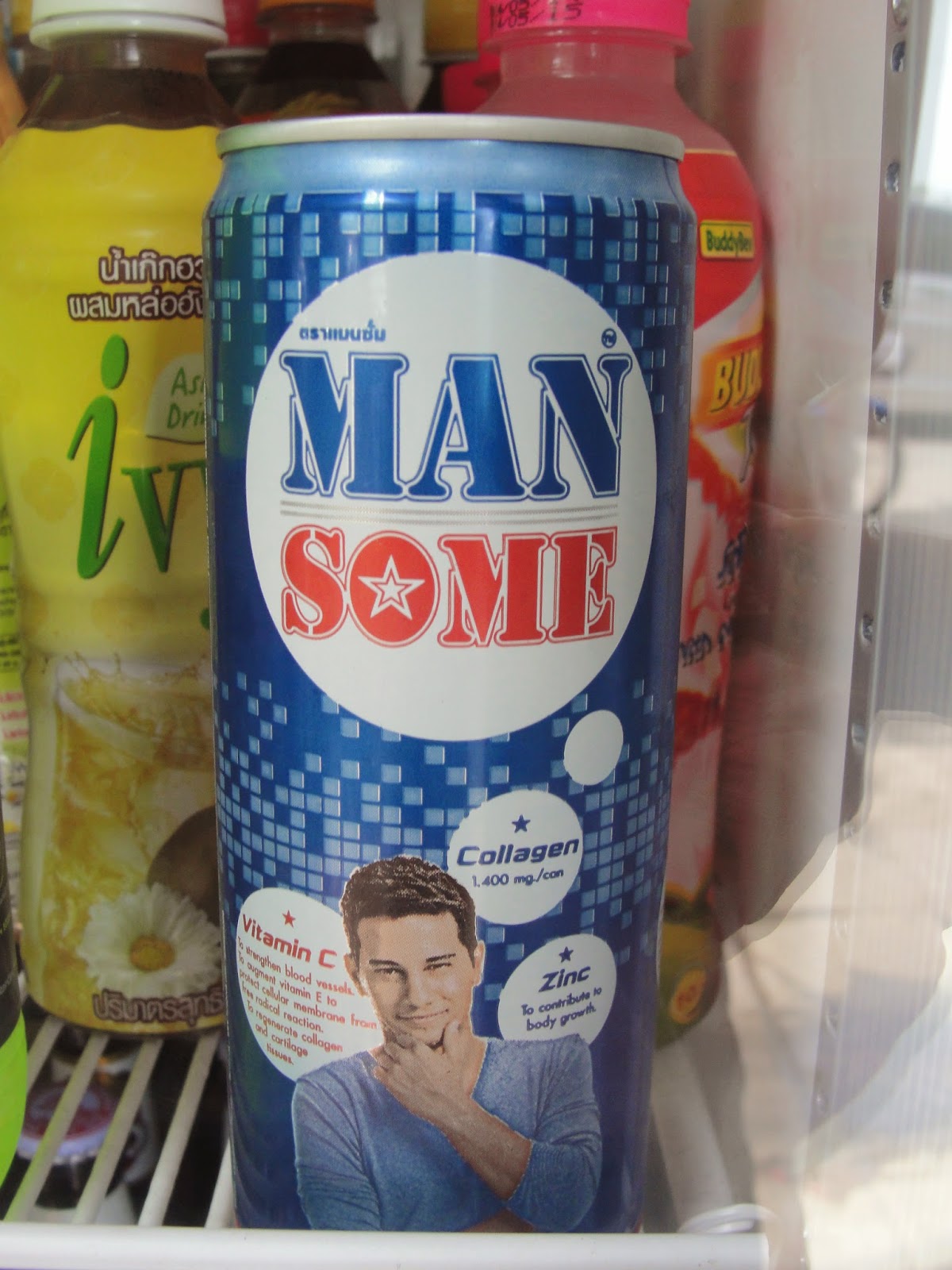 sadly, Patrick did not purchase one
(neither did Jen) 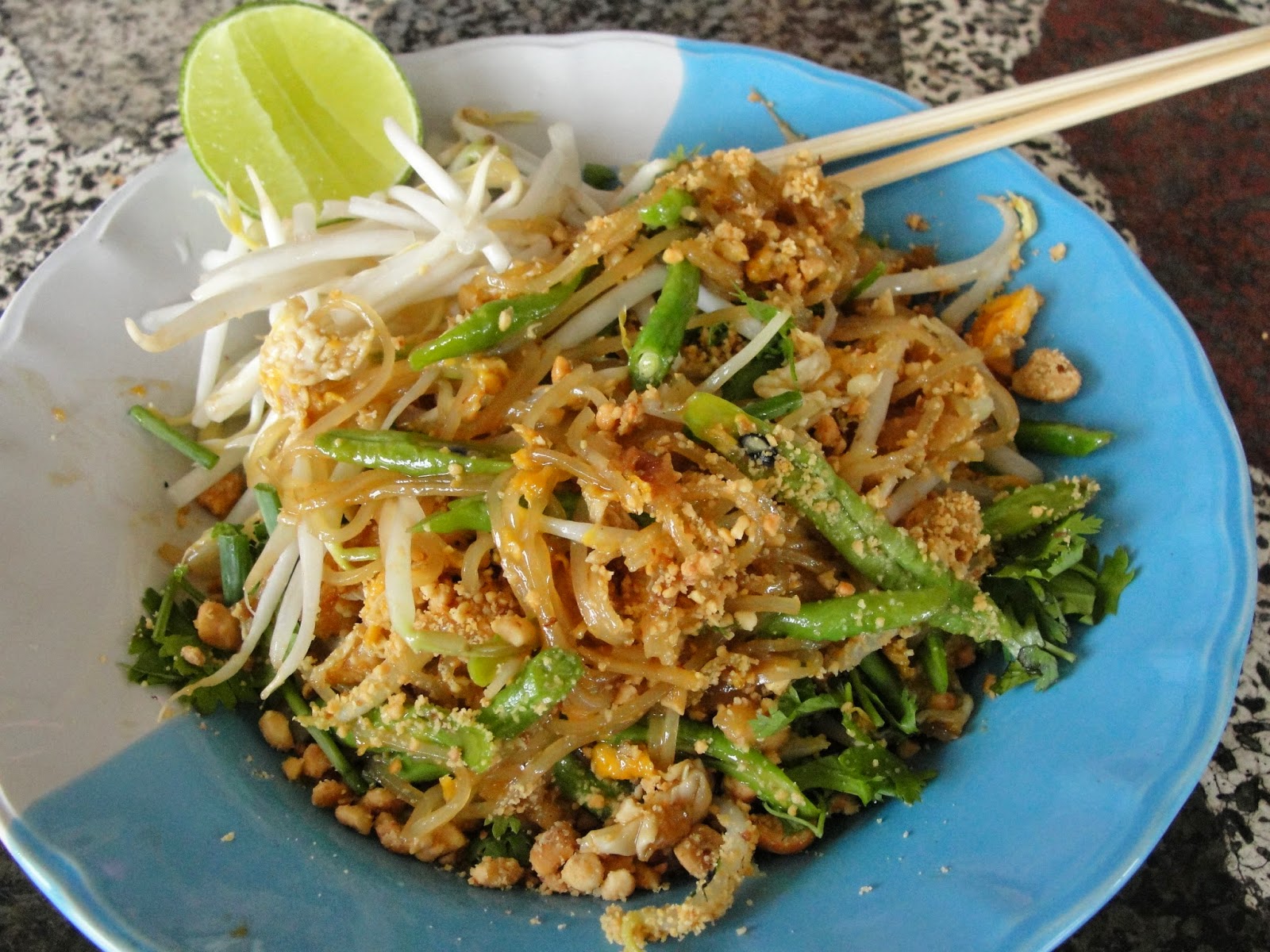 just pick one, the pad thai is same same everywhere 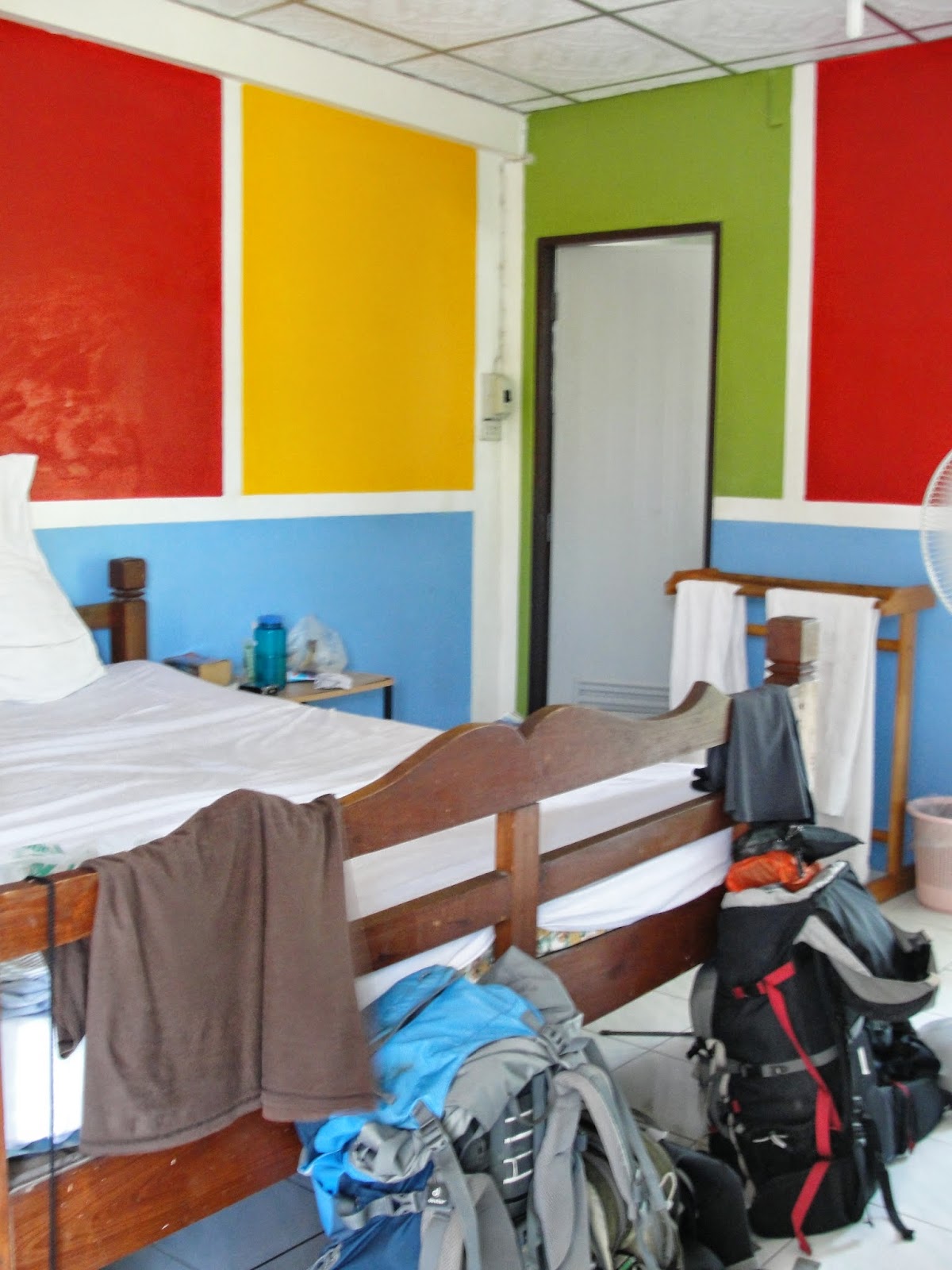 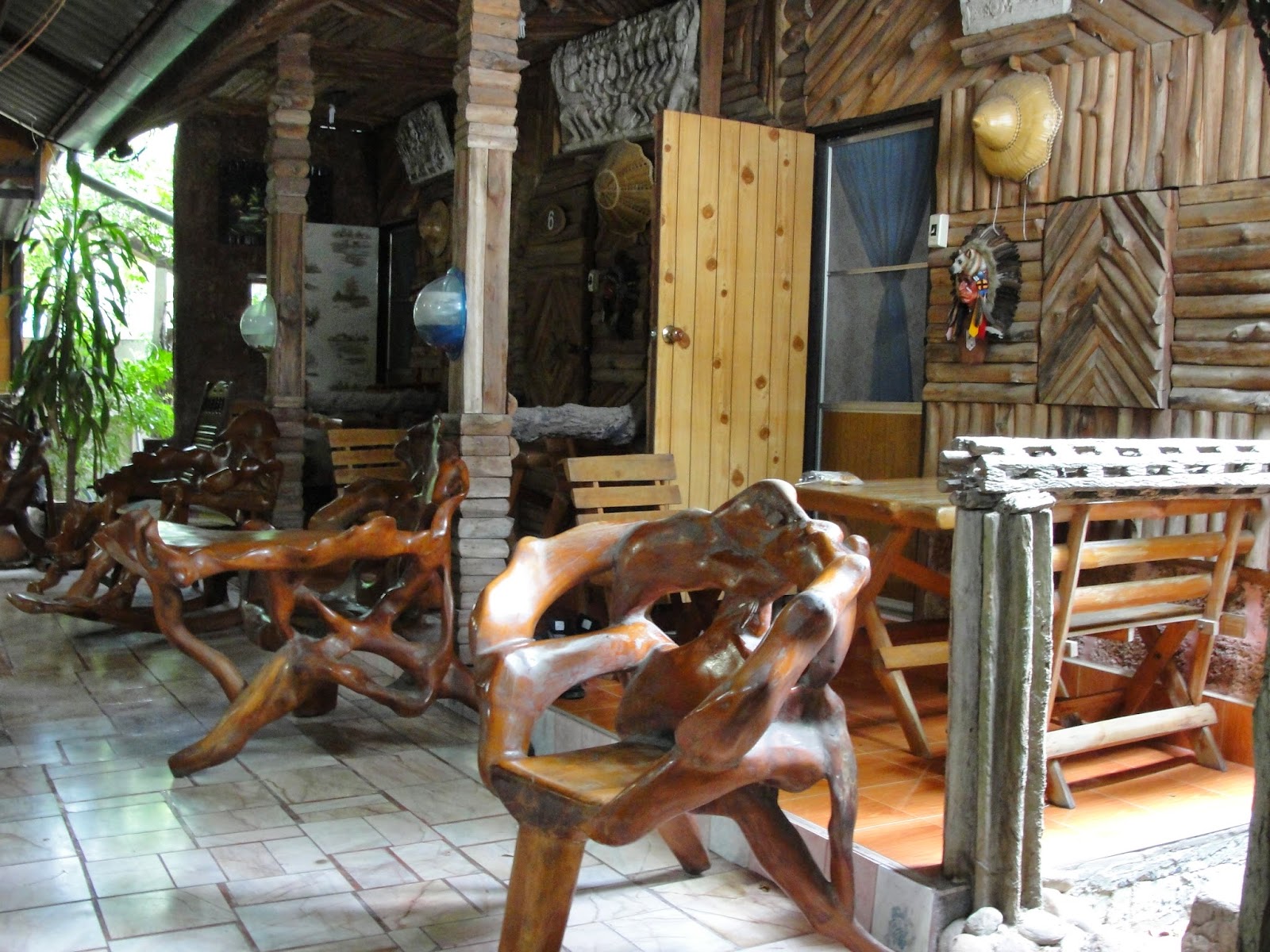 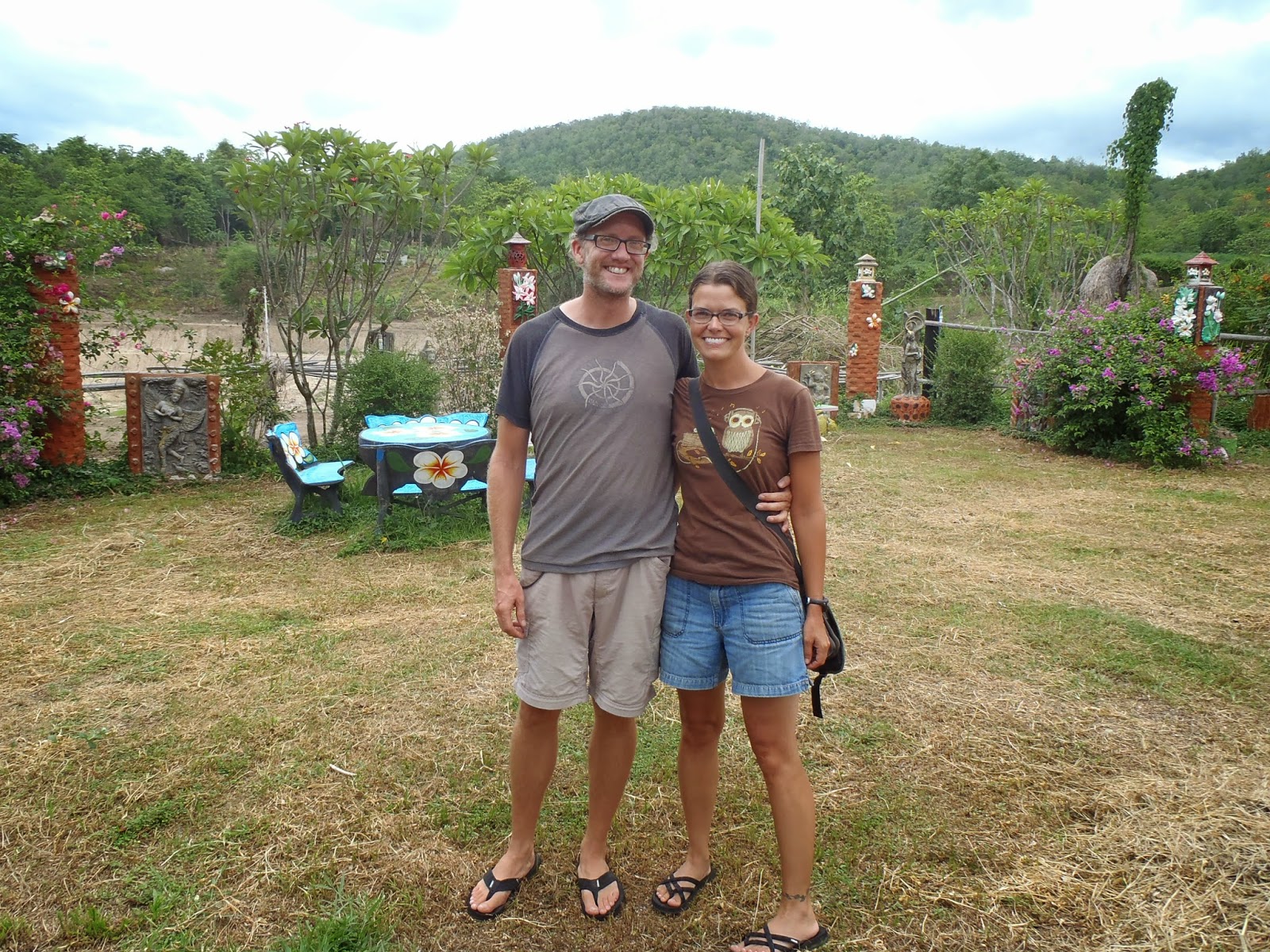 and Mr Cherin gave us a tour of his farm 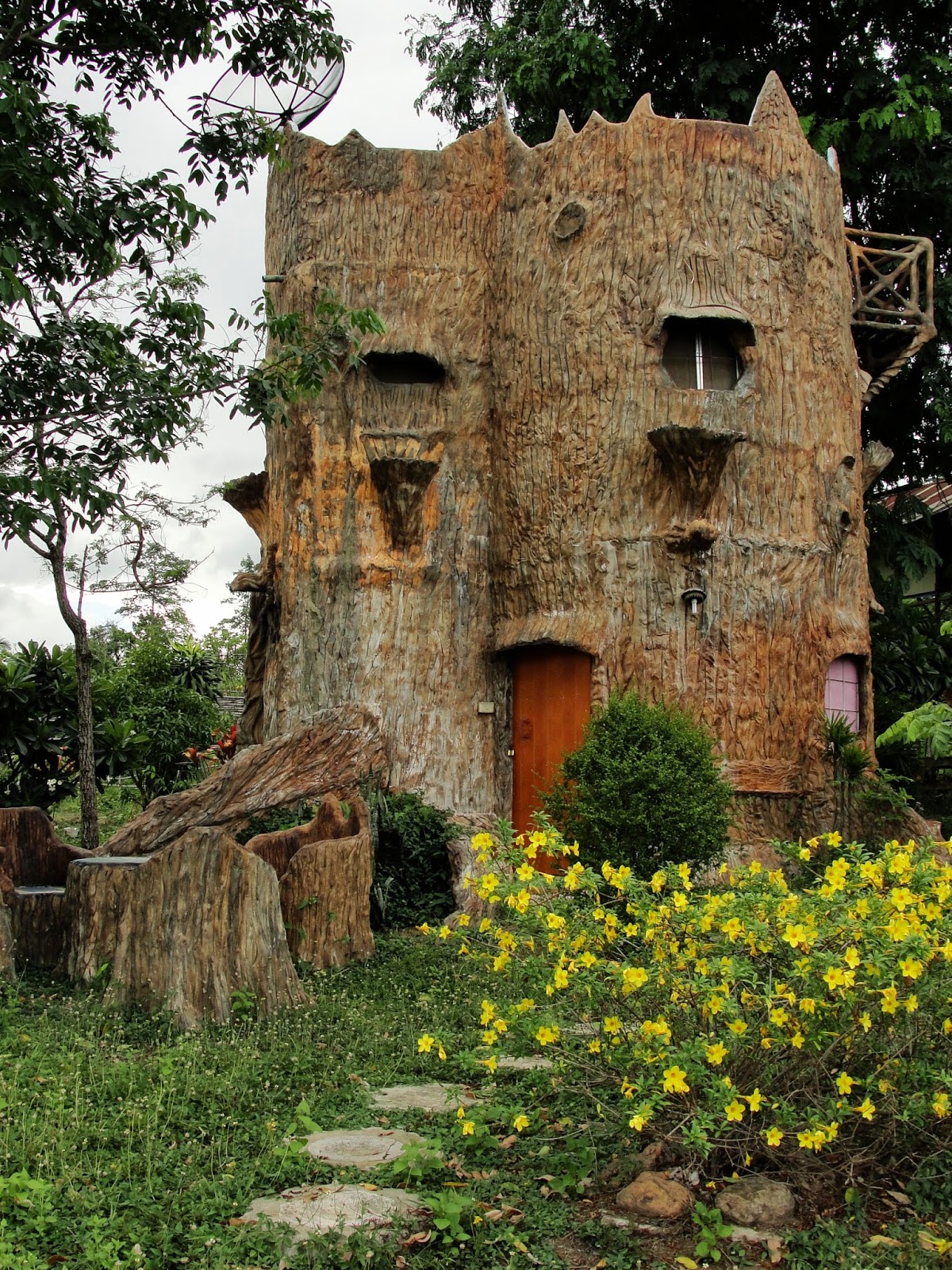 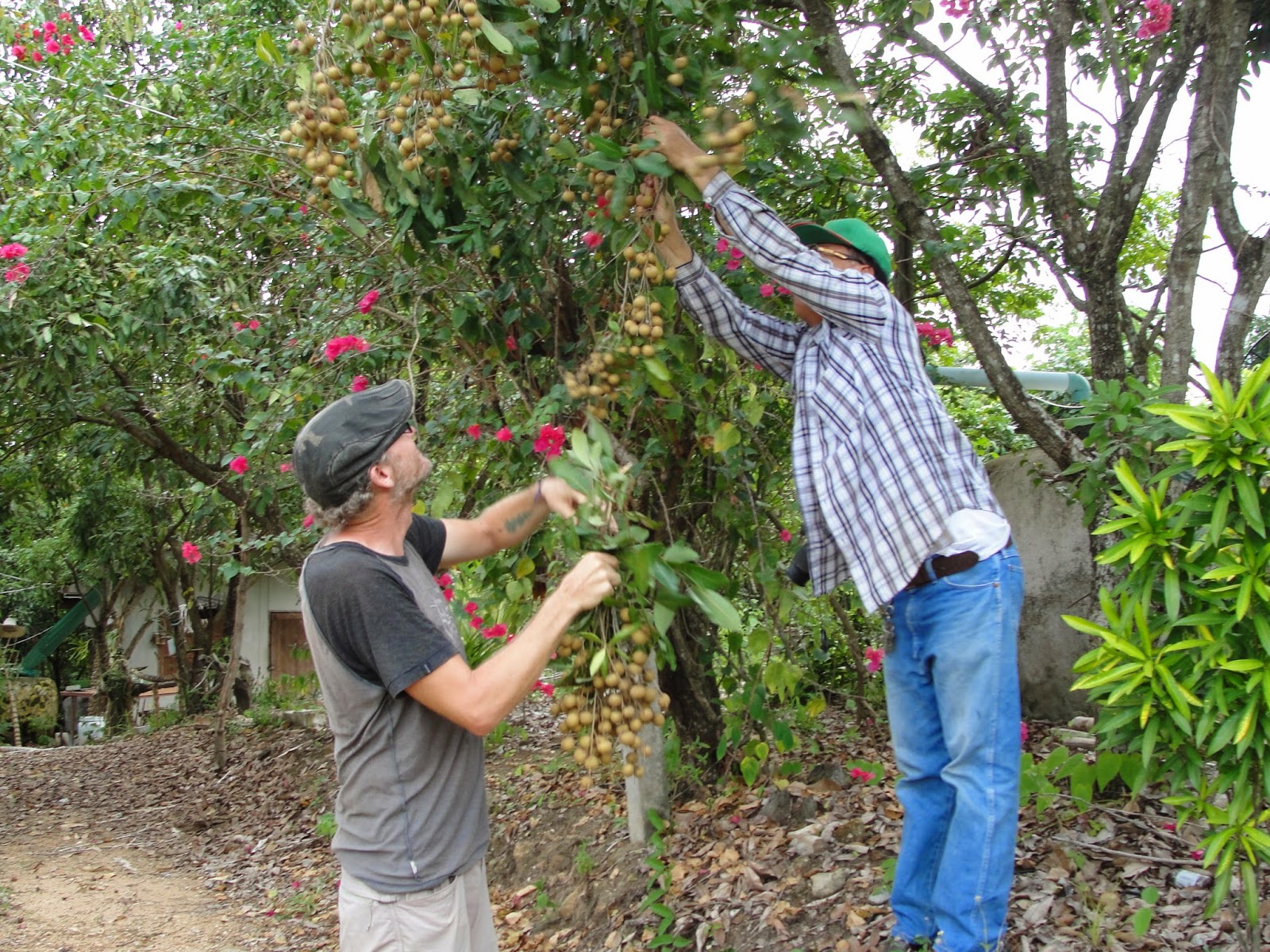 where we hope to WWOOF someday
instead of just lend a brief hand
Ayutthaya is also on the list, but we're all ancient-ruined out right now so we're going to fast forward from the 8th century to the 20th, detour west and see what this bridge on the River Khwae is all about...
Posted by Jen
Email ThisBlogThis!Share to TwitterShare to FacebookShare to Pinterest
Labels: asia, thailand