Yesterday we were looking for lunch while we waited for our train. We passed a cafe with tasty-looking food but as we stood there with our backpacks considering what to order, the guy behind the counter shook his head and pointed up the street. "Chicken, noodles," he said in English.

"Is that chicken?" I asked, pointing to a particularly intriguing pan of his veggies and meat that looked suspiciously like chicken.

He shook his head. "Fish." Still pointing up the street, he repeated, "Chicken, noodles." We sighed, gave one last longing look at what was definitely not fish, and walked in the direction he pointed.

"Chicken, noodles" - AKA "noodle soup"- is breakfast for everyone in SE Asia but it's also common farang food at any time of day. Noodle soup is cheap. It's readily available. It's easy to order by pointing and nodding - although almost every food stall owner we've met can say "noodle soup? chicken or pork? one or two?" - even if that's the only English they know.

Noodle soup is usually far less interesting than what the locals around us are eating. It's plain and dumbed-down because the food folks think our farang taste buds can't handle the local spice levels. But we can't read the local menu, and our attempts to request "what they're having" by gesturing toward other peoples' food haven't been too successful. So we add chili and eat our noodle soup.

We've also gotten used to the "farang tax" that's employed regularly in tourist towns and occasionally in more remote areas. Cafe menus written in English usually have prices, menus in the local language often do not; market food stalls sometimes don't list prices regardless of the menu's language. So food folks can pretty much charge farangs whatever they want, and many do. With fruit stands, we can't begin to match locals on bartering so even if we get the price down it's still more than we should be paying. Generally speaking, this all seems fair since generally speaking, farangs earn more in their home country than the locals.

Sometimes the "farang tax" on food comes in different forms. Yesterday after our "chicken, noodle" lunch we bought doughnuts at the train station. We asked for two. "Three baht each," the grandmotherly food cart lady said. "They are very good. Four?" She may have even slipped us the Sullivan nod as she upped the quantity. We looked at each other - we had another two hour wait and four hours on the train, four doughnuts wasn't a bad idea - and nodded. She put five in the bag and charged us 15 baht (~$0.50). We smirked and handed over the money. Shockingly, the doughnuts were not "very good."

Taxis always charge farangs more than locals. But taxis charge too much, period. We avoid them whenever possible. Period. 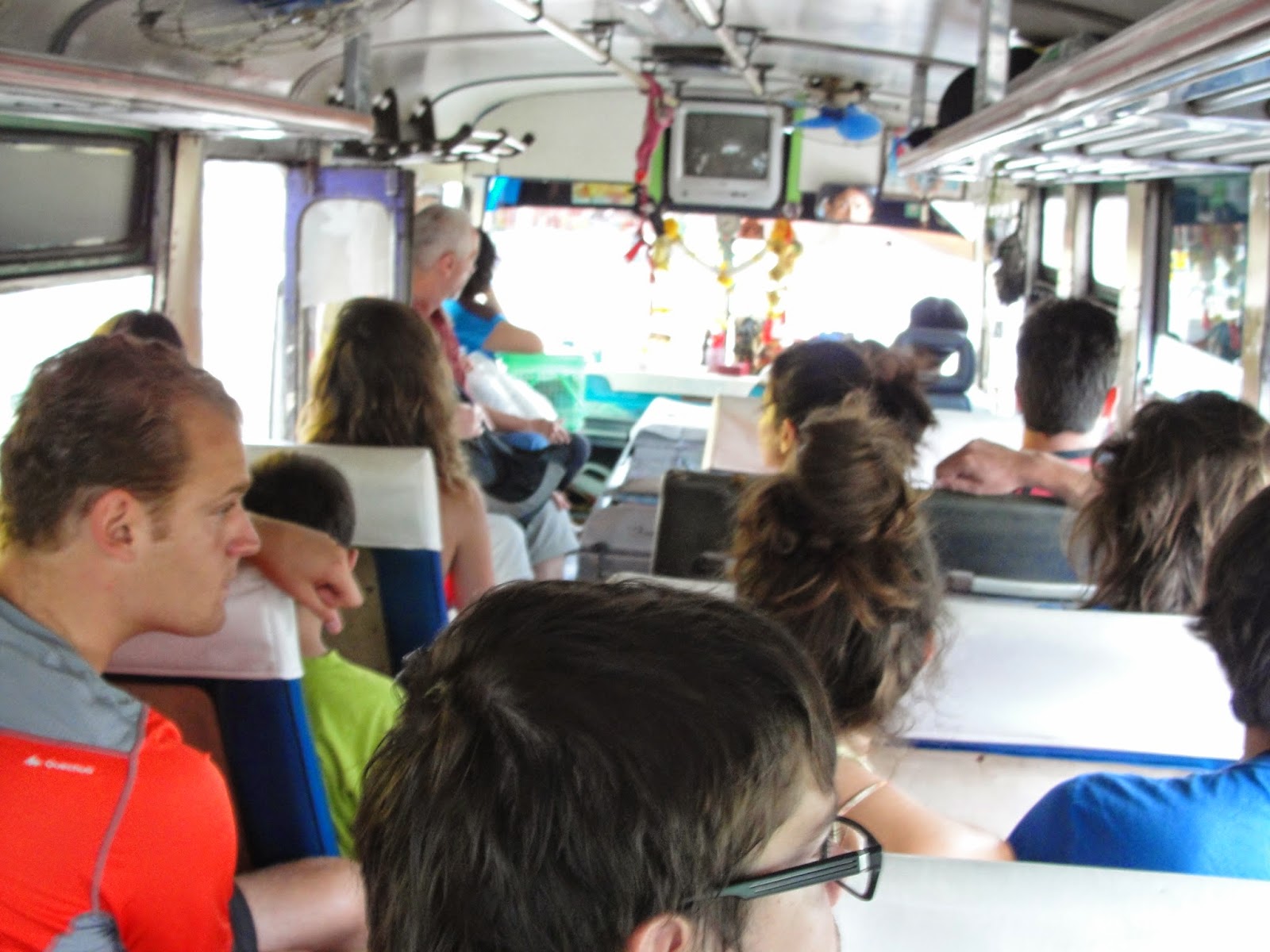 (That said, we did have one odd experience on the "Death Railway" train to and from Namtok the other day. For the privilege of this ride farangs pay 100 baht, Thai pay 40 baht. Fine, whatever. 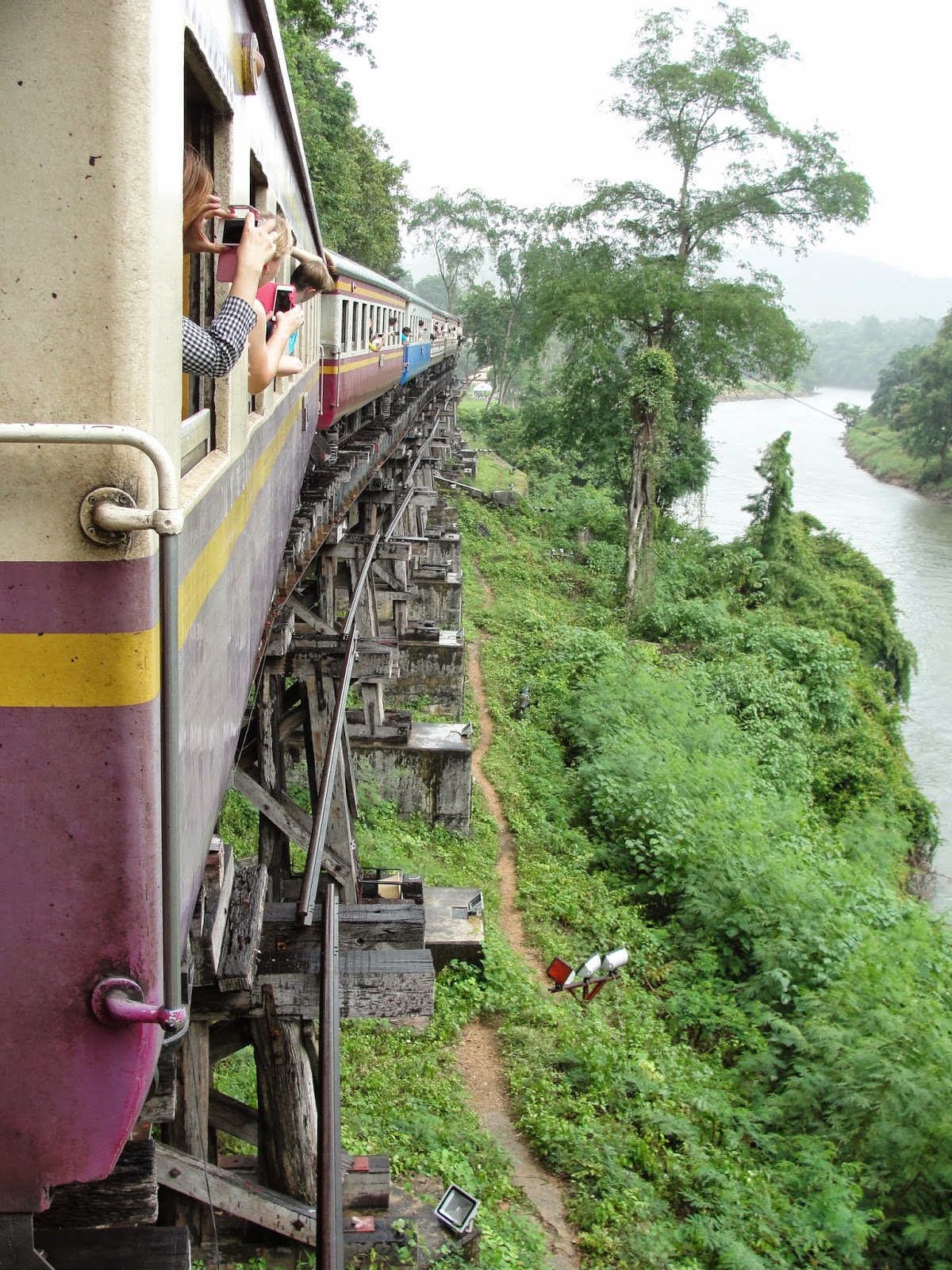 
In this case it really is a foreigner fee - Japanese and Chinese tourists paid the 100 baht along with the French, German, Dutch, Argentine and American tourists. But for this ride they put all the foreigners on "special" cars. Seriously, there's a sign indicating that it's a "special" car. 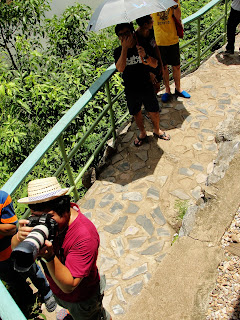 we even had paparazzi

It was like having to ride the short bus, or sit at the kiddie table at Thanksgiving even though you're 23 years old. We'll pay our "farang tax", just let us sit with the locals!)

We've gotten used to paying farang prices, sometimes happily and sometimes through smiles with gritted teeth. Actually being called out as a "farang" by a local is another experience altogether. Like the time I was trying to get off the bus in Mae Sot but a mad rush of locals swarmed the door and I got stuck. The bus driver half-stood and yelled "THAIBLAH-THAIBLAH-THAIBLAHBLAH- FARANG-THAIBLAH-THAIBLAHBLAHBLAH!!!" and the crowd suddenly parted, letting me off the bus. That's going down as one of my Thailand highlights.

Or the time in Kamphaeng Phet, which doesn't see a lot of tourists, when we stopped at a small market for water. The shop owner was chatting with her mother while we shopped and paid, and every sentence included "farang." It was so odd to be talked about in front of our faces without having a clue what was being said. Was she charging the farangs the same price as the locals? Or more? Or was she saying that they don't see many farangs at the market? Or that those farangs sure did stink after riding their bikes around the park all day? We hope it was the first one (the price was certainly fair!) but most likely it was the last one. We'll never really know.

And then last night at the market we approached a cart with a lot of food options. The lady took one look at us and said, "Noodle soup? Chicken or pork? One or two?"

It was good soup.

This happens everywhere no matter who you are, where you're from, or where you're visiting. It's all part of the travel experience. We were "foreigners" to the fruit market ladies in Central Europe. We've been "farangs" since Vietnam, even though the term is mainly used in Thailand. In Australia and New Zealand we'll probably be the "Yanks" and we'll pay ridiculous prices for wool sweaters and kiwi fruit. What will they call us in Nepal?
Posted by Jen
Email ThisBlogThis!Share to TwitterShare to FacebookShare to Pinterest
Labels: asia, life on the road, thailand