Friday five: these are the horses we know, we know.

Five horses we see every day, in order of the size of their food buckets:

Star gets the smallest food bucket because she's on a diet. She is patient while I clean her hooves and brush her mane, but once the food arrives all bets are off. She loves hay and tends to have a green face most of the time. When food isn't involved she pretends to be a bully, as evidenced by the time we tried to take her for a walk and she (literally) dragged us through a muddy field, but now that I know her better I think she's really just a little softie with a Napoleon complex.

Star gets bored and/or agitated in her stable at night and kicks a lot. There are new holes in the walls every few days and she's completely destroyed her stable door. (We call it Star TV - she started with a 13" screen, moved on to a 36" a few days later, and now she's all about HDTV.) Star tends to get hand-me-down blankets from the larger horses; they don't quite fit her and as a result I end up singing "Coat of Many Colors" to her on a regular basis while I rug her up. 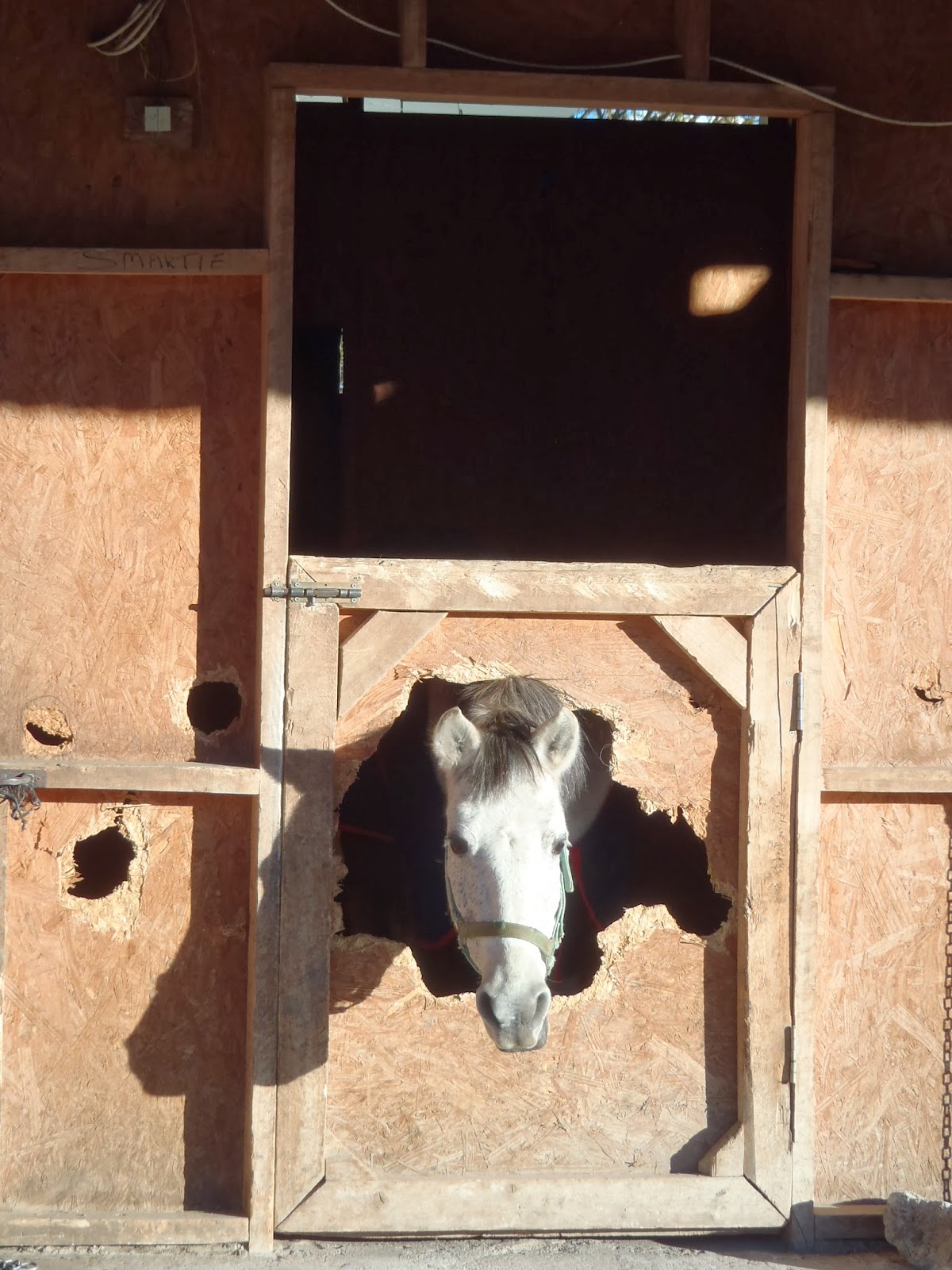 Dervish and Merlin get the same sized food bucket. These two have been around the stables the longest. They like to romp in the paddock, roll in the mud, and go for long rides with experienced riders (AKA "not us"). They also like to poop right after we've emptied all the poop buckets - how cheeky! They can both eat a plum and spit out the pit, and I bet they could tie a cherry stem in a knot with their tongues if given the opportunity.

These lucky guys get mint every day to help clear their air passages, and their food buckets always smell delicious! Dervish has asthma so his food and stable have to be treated with care. Merlin has recently reverted back to some unfortunate behavior so we don't deal with too him much but our host assures us that he's a sweetheart under normal circumstances.

They're both very curious whenever we're in or near the paddock. And they're so handsome! 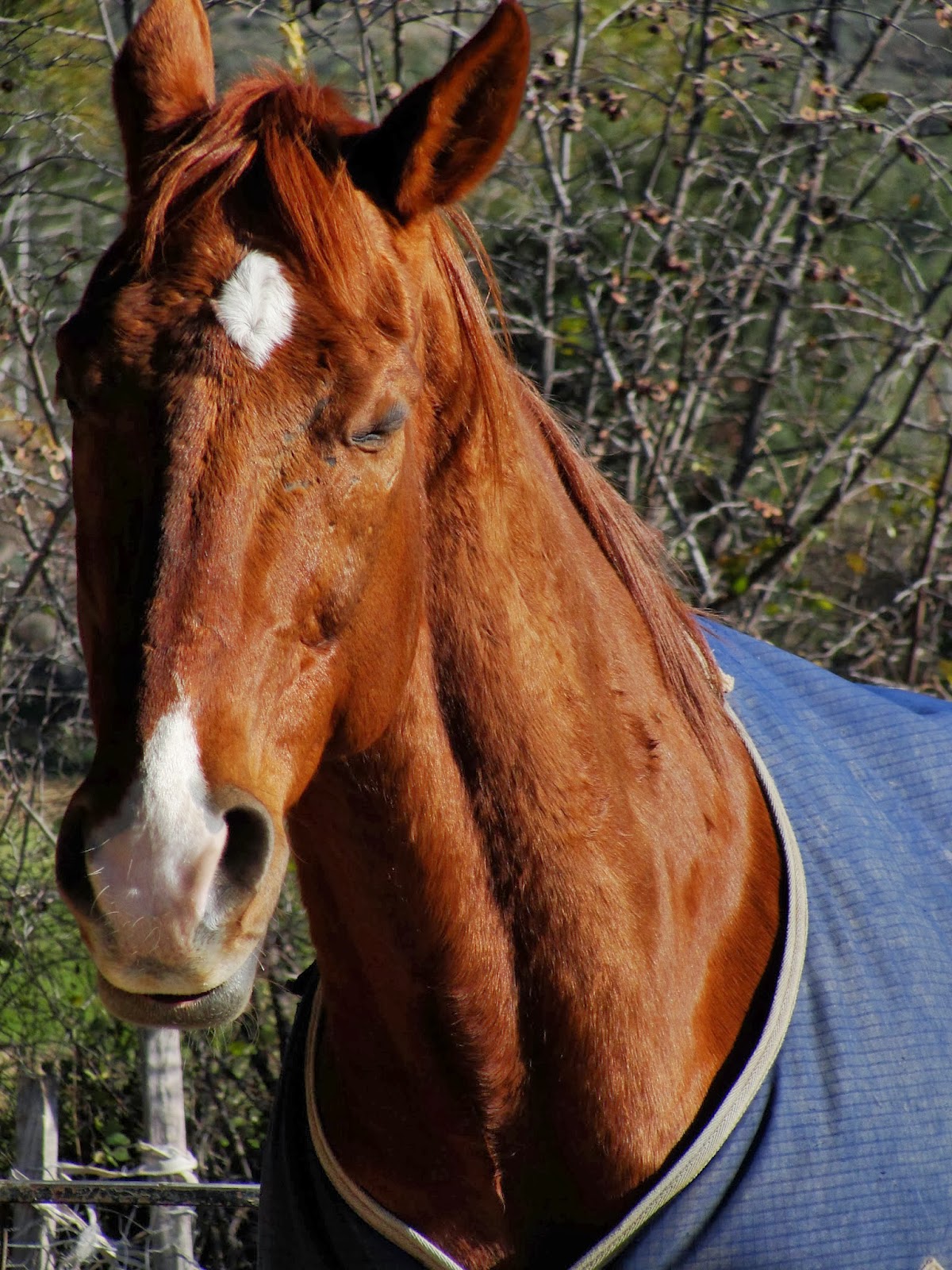 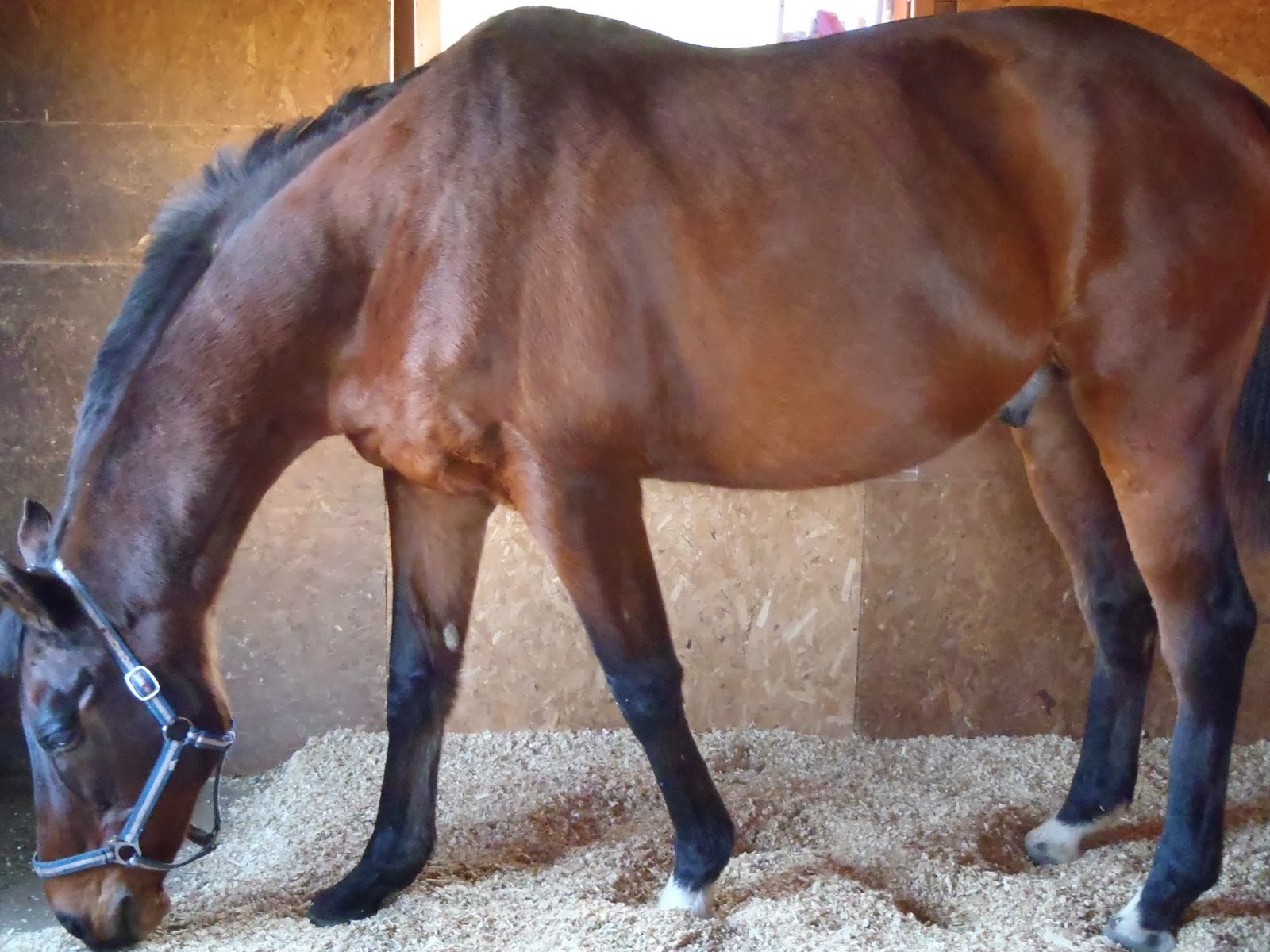 Dervish quality-checking his bed after the morning muck
(or, more likely, looking for leftover food)

Smartie gets a slightly larger bucket than Dervish and Merlin. Smartie is true to his name - since we've been here, he's unlocked stable doors, gotten into the tack room, unhooked his tether chain, knocked over anything and everything he can get his mouth around, and otherwise outwitted us silly amateurs.

He likes to nom on your arm with his lips (which cracks me up) and when he accidentally chomps down, he knows he's gone too far and pulls back. When he's done with his food bowl he picks it up with his teeth and bangs it on the ground (which also cracks me up). Occasionally we are able to clean his feet but once in a while his impatience gets the better of us and we leave it to the pros. He's quite obnoxious when he wants to be, but hey - what teenage boy isn't? 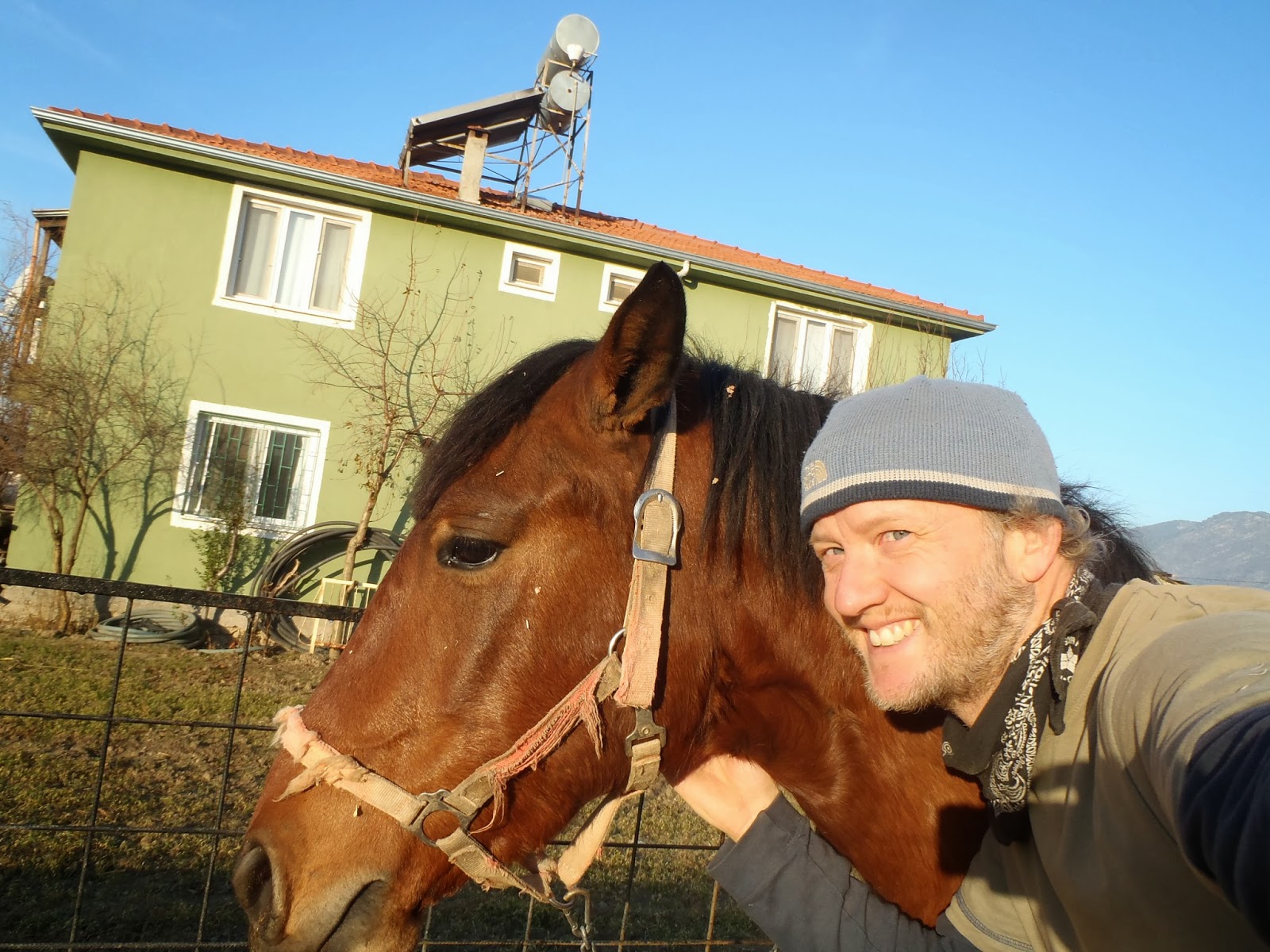 Smartie plotting his next scheme

Last but not least, Amira. She is gorgeous. She's also patient, well-mannered, and the messiest eater of the five (hence the largest bowl). When she likes you she shoves her huge head into your chest. When she's hungry she wants nothing to do with you. When it rains, even if it's cold, she pokes her head out of the shelter into the drizzle and lets the water drip down her neck.

Amira has a sensitive tummy so she gets an antacid in her food every morning. (Maybe this is why I get along with her so well?) It's hard not to love her. 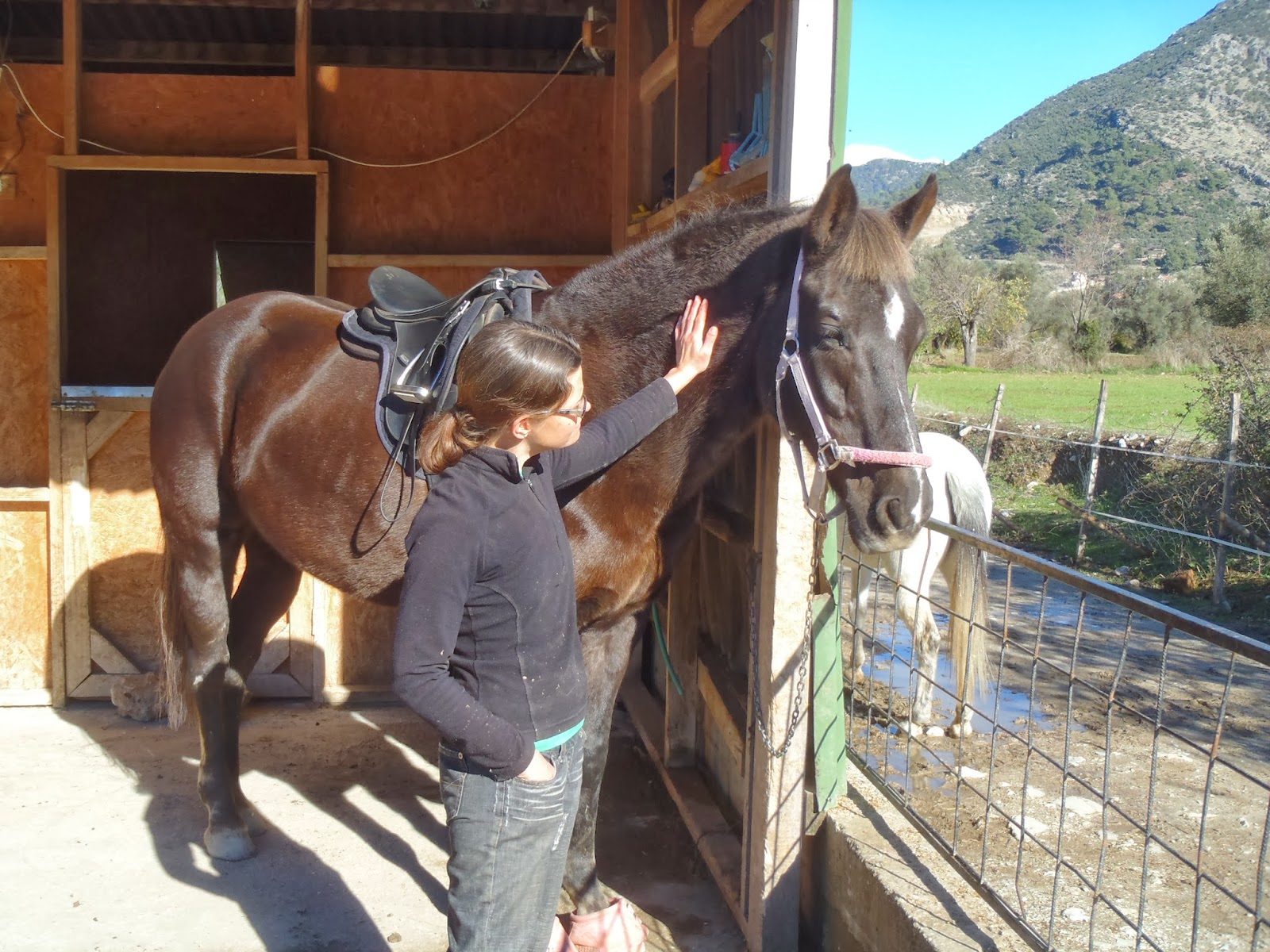 We also see three cats and a dog every day, and the neighbor's chickens, goats and crazy puppy almost every day.  But (especially if you live in Portland), you probably do too, so that story won't be very interesting...
Posted by Slowly Global
Email ThisBlogThis!Share to TwitterShare to FacebookShare to Pinterest
Labels: Friday five, voluntourism, WWOOFing etc