Our entry into New Brunswick featured a crowded RV park - the first and hopefully last of its kind for this trip. 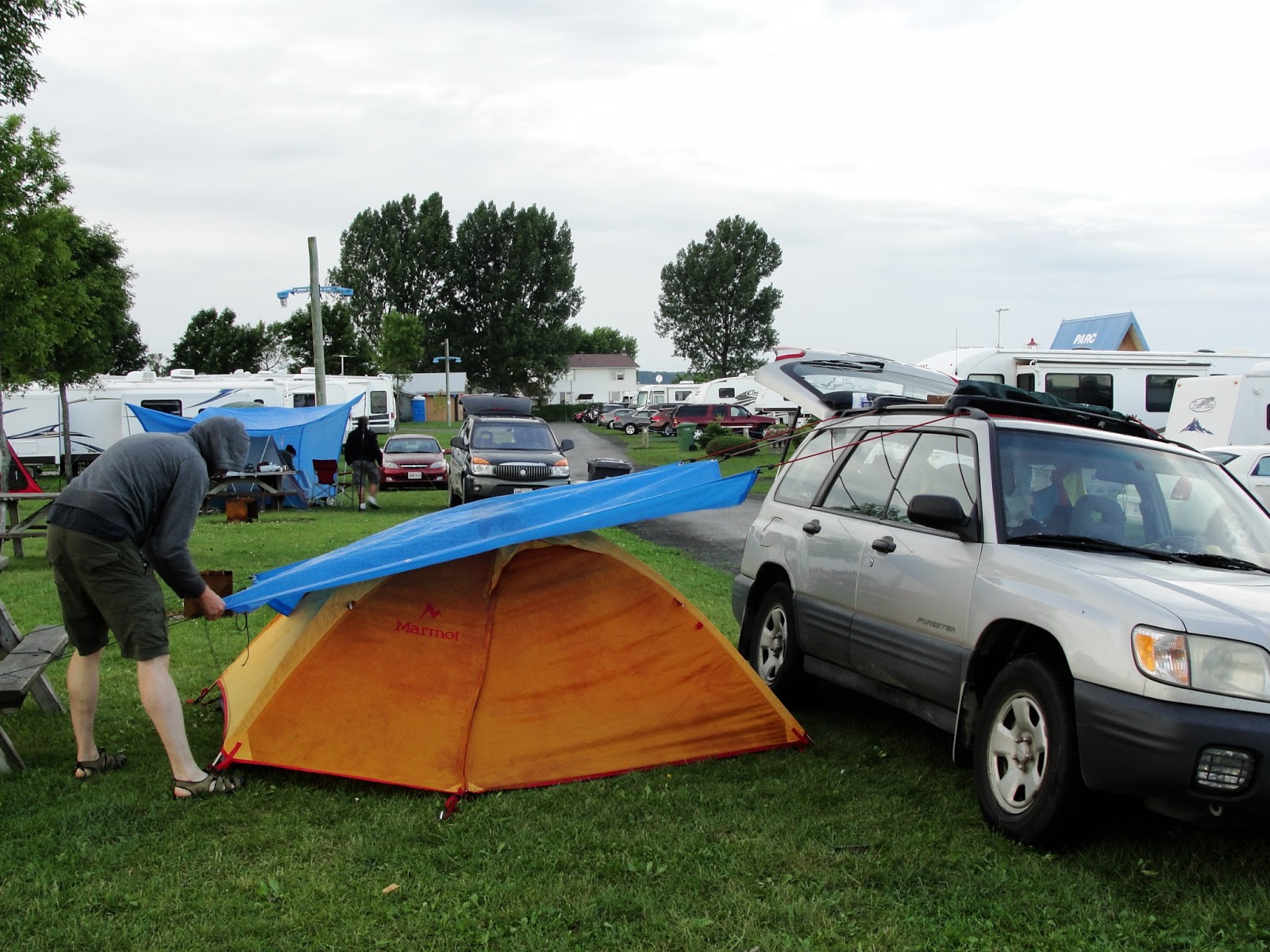 prepping for rain amidst the cozy RVers

To its credit, it was cheap, it was fairly clean, it featured lakeside views with a beautiful sunset, it was close to laundry and the most amazing chocolate peanut butter ice cream, and it was right next to the Recreaplex (where the kids were holding hockey practice) and that weekend's Bon Ami festival, where we enjoyed a little local flavor... 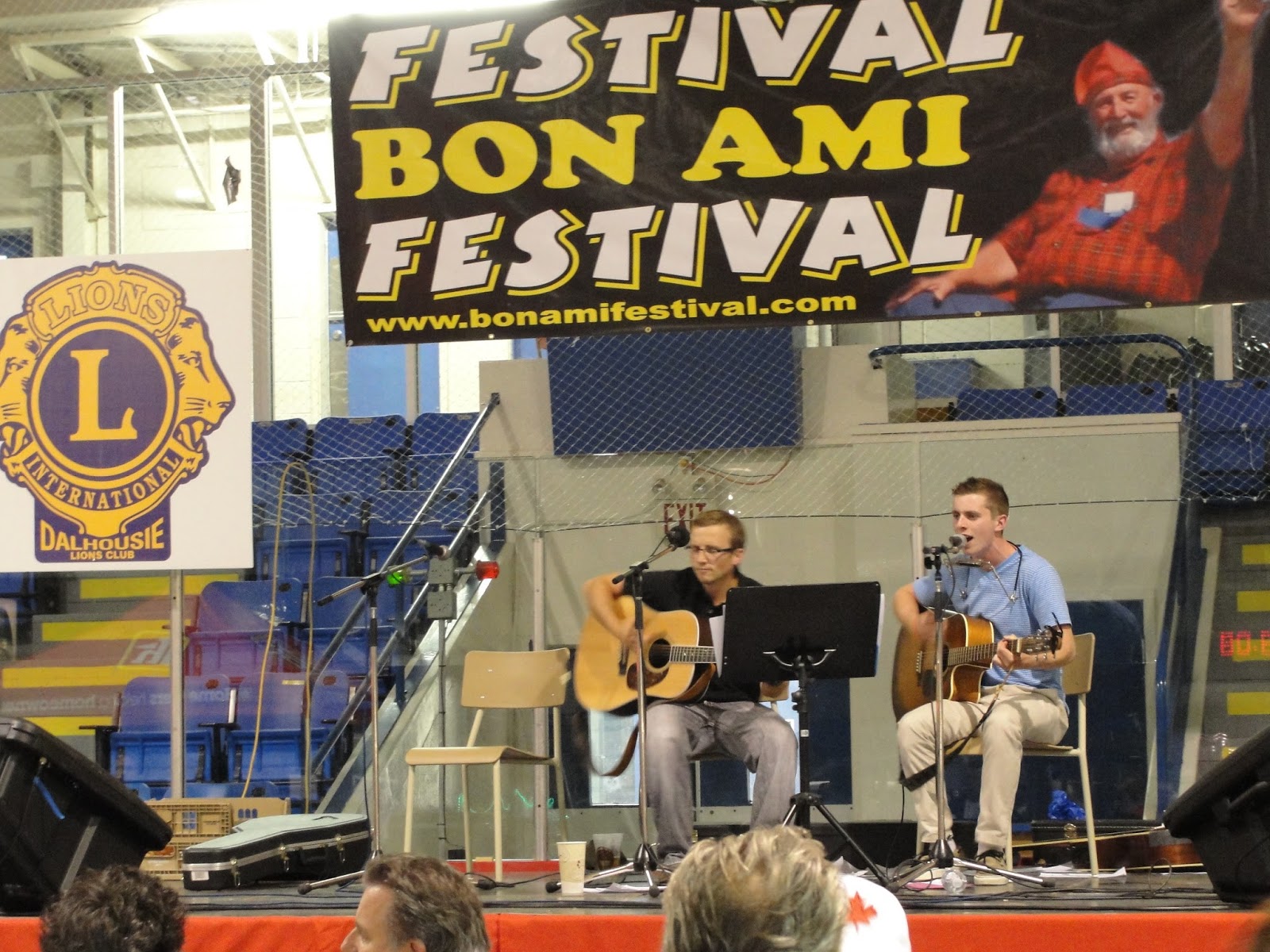 ... before retiring to our bottle of wine at "camp" (mandatory in situations like this). 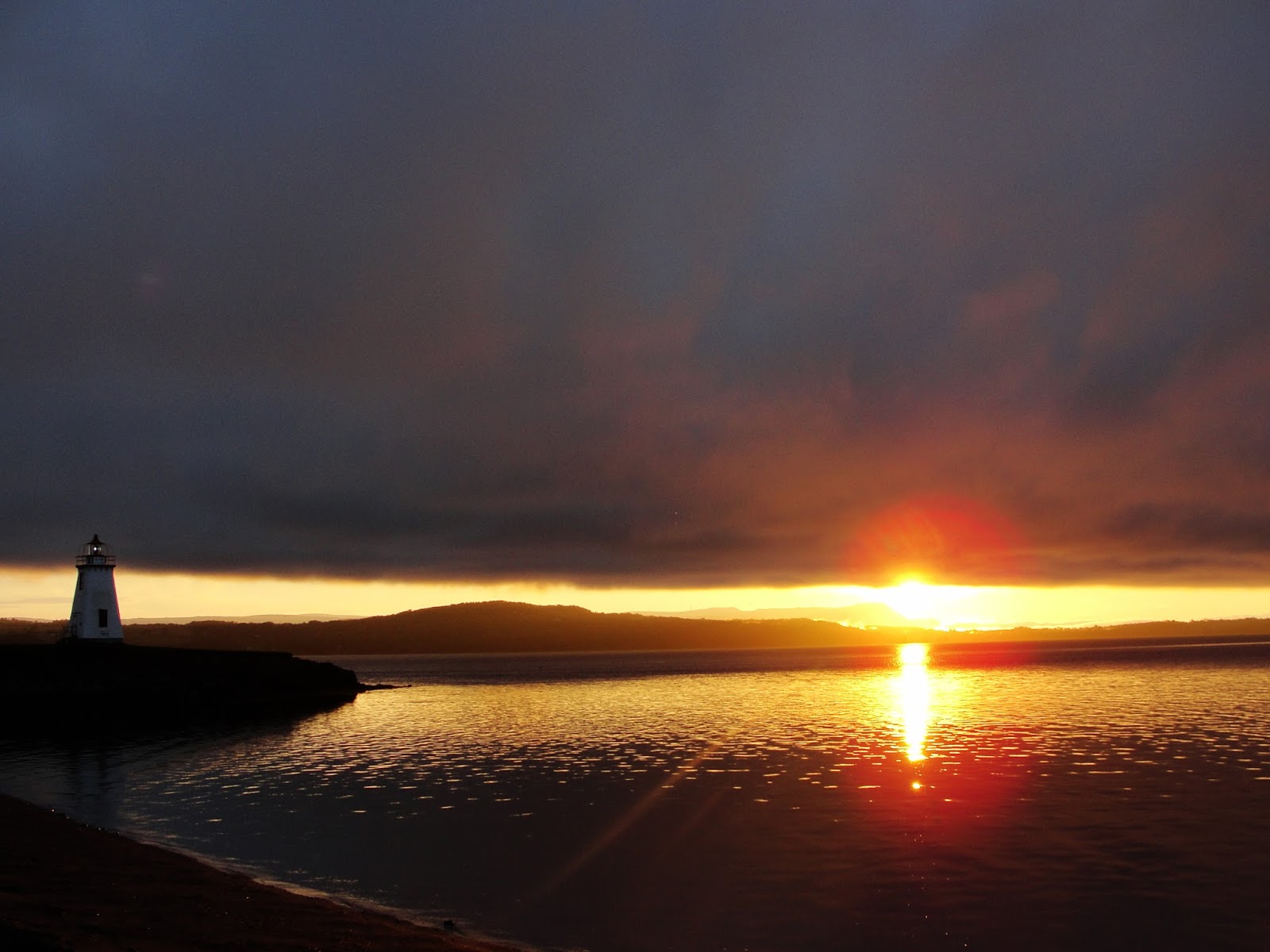 the sunrise was pretty too

But we got out of there as soon as possible the next day.  Midway through our long haul to Nova Scotia, we stopped at Kouchibouguac National Park for lunch. It would be the first of several parks we would encounter that have resort qualities rather than serene natural settings, but we're sure that without the hoards of families on bikes, ice cream shops, and massive swarms of mosquitos, it's a wonderful park. Probably. 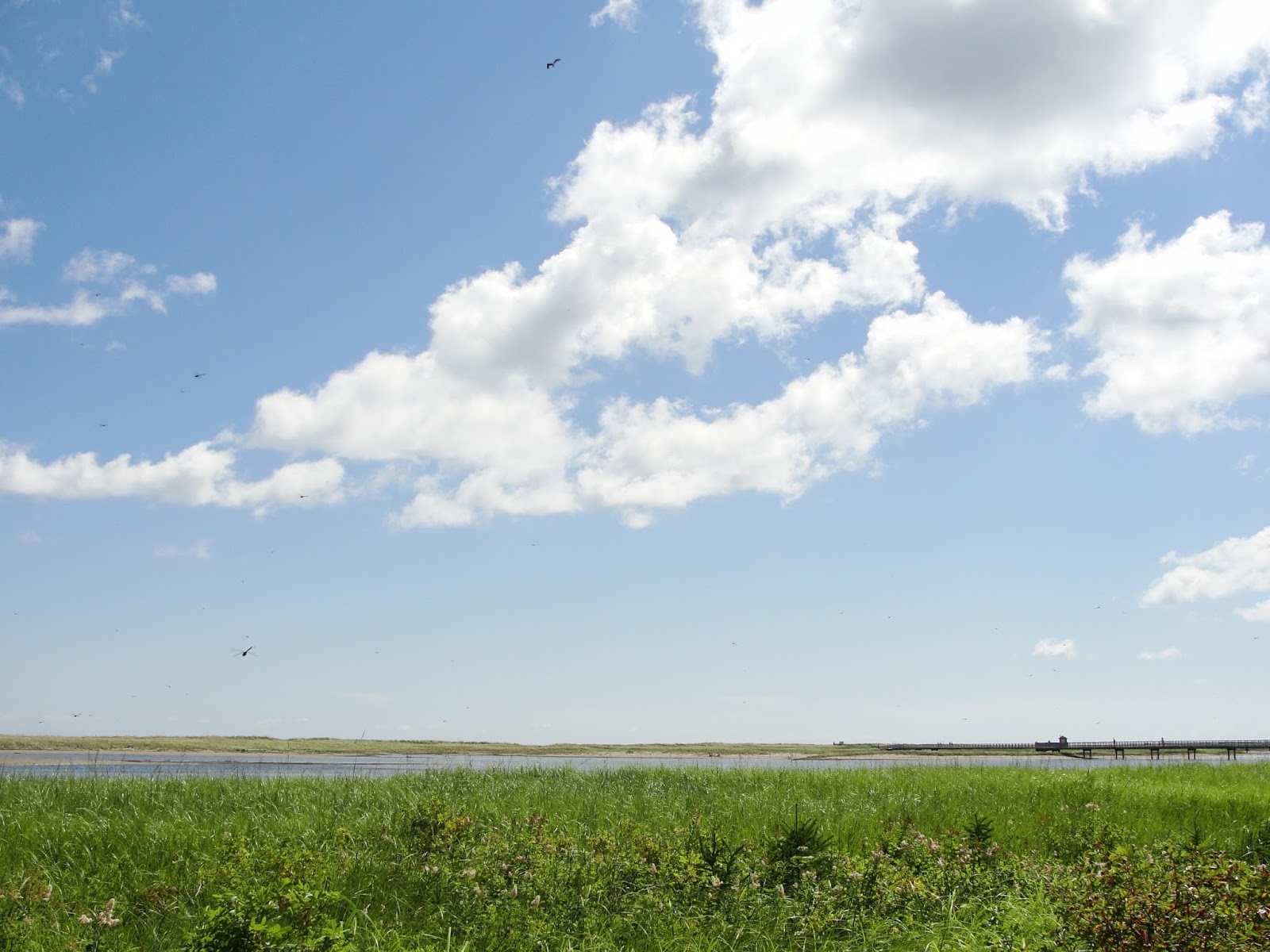 swarms of dragonflies too

{We interrupt this post to take you to four days in Nova Scotia. Please hold.}

Last but certainly not least in New Brunswick was Fundy National Park (#11!). About an inch of rain and possible thunderstorms were predicted upon arrival, and we considered a motel before deciding to plow on to the campground. Given the late hour and the weather, Jen was dubious about this plan but agreed; everything worked out perfectly. 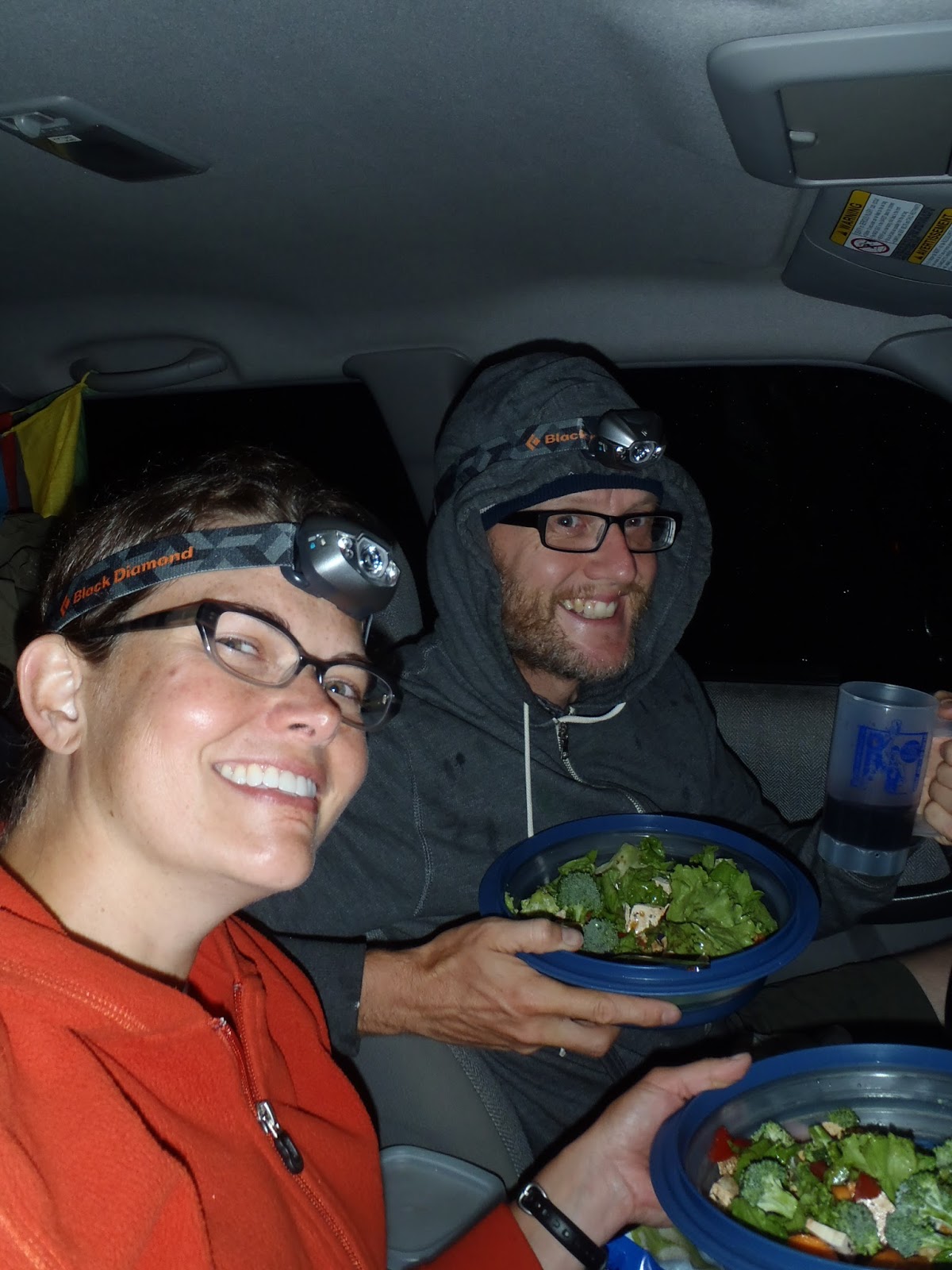 no leaks, no puddles around the tent, and eating a cold dinner
in the car counts as perfect in our rainy day camping book

This was the point where Jen (the control freak) officially succumbed to The Universe. From this point onward, whatever happens, happens - and what DOES end up happening is meant to be. Besides, we started this national park tour in the rain; makes perfect sense to end it in the rain too.

Anyway. Fundy National Park is known for its tides - they change by up to 12 meters each day. 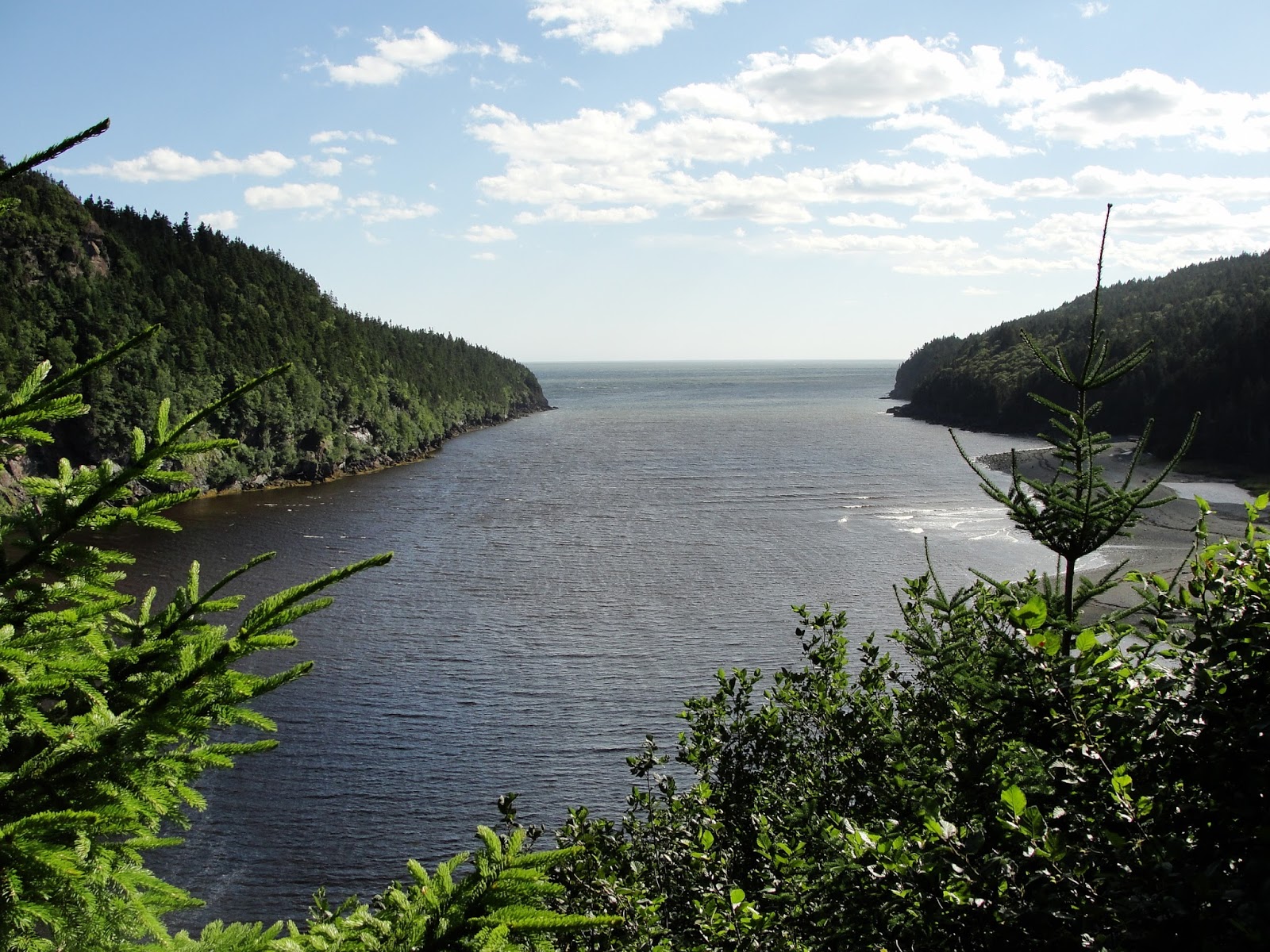 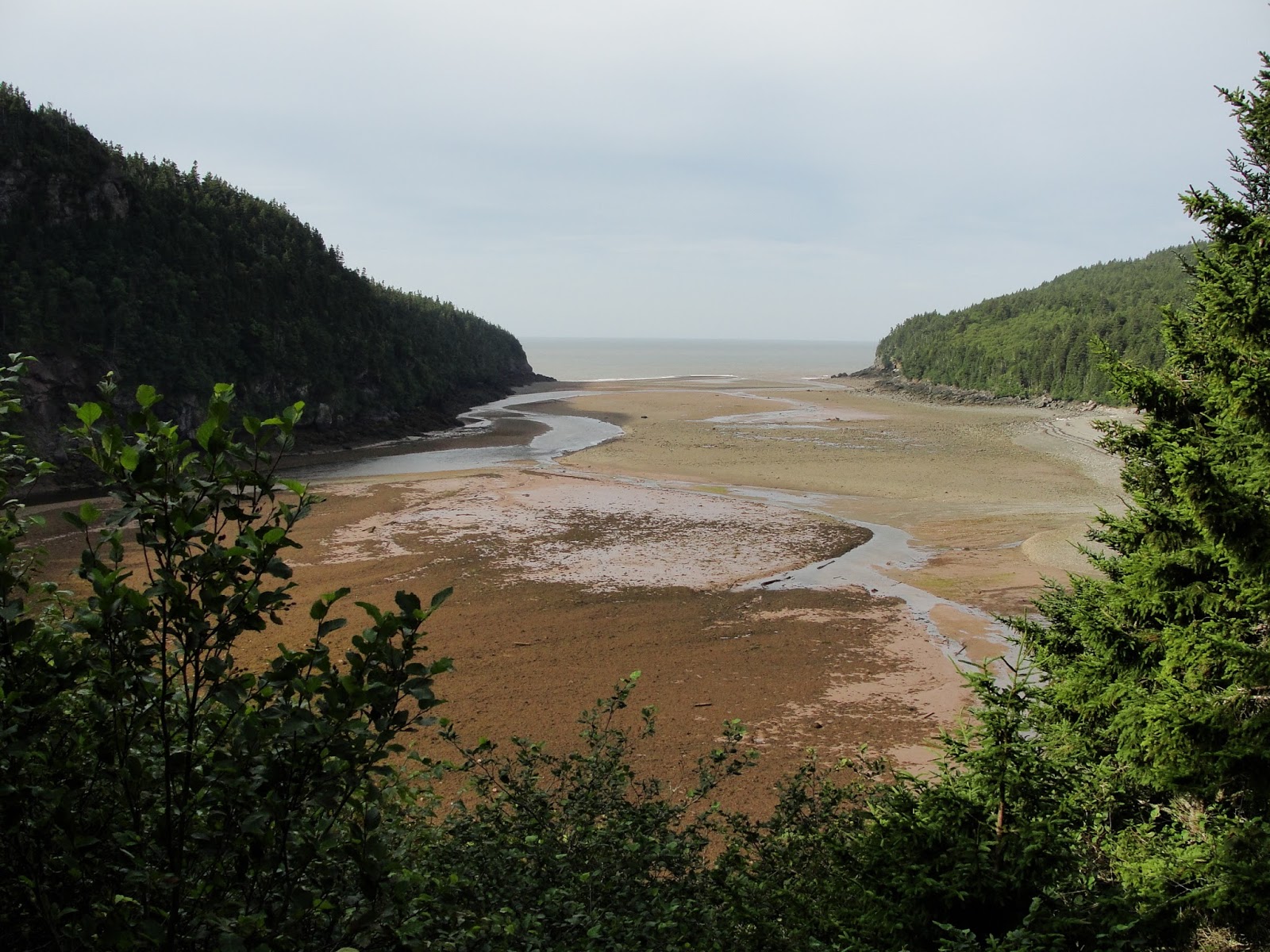 It's also known for its waterfalls, three of which are more than five meters tall. (FIVE WHOLE METERS? Everyone in Portland is laughing along with us right now.)  We ended up with awesome weather after the first night, and were able to see two of the three. 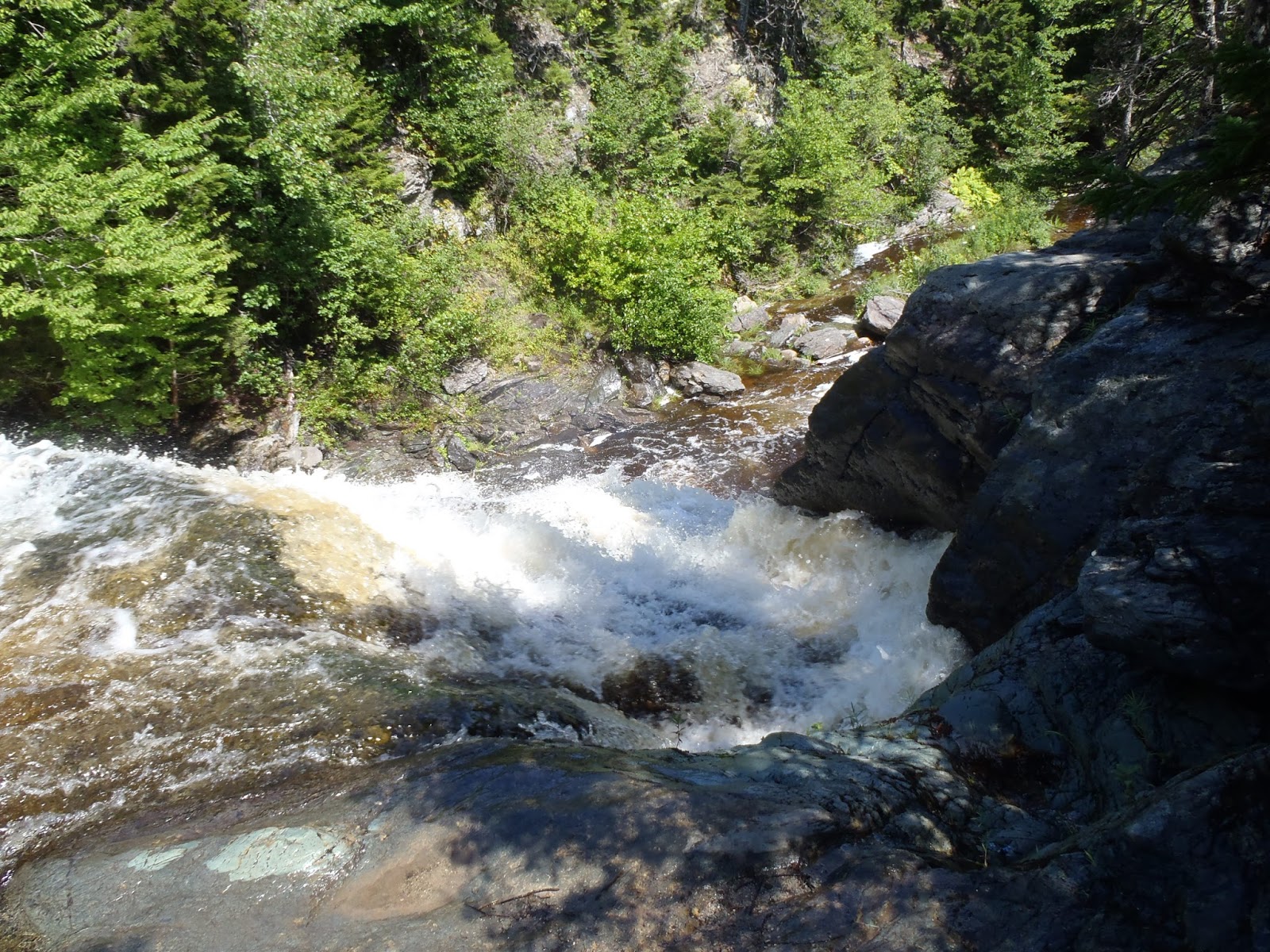 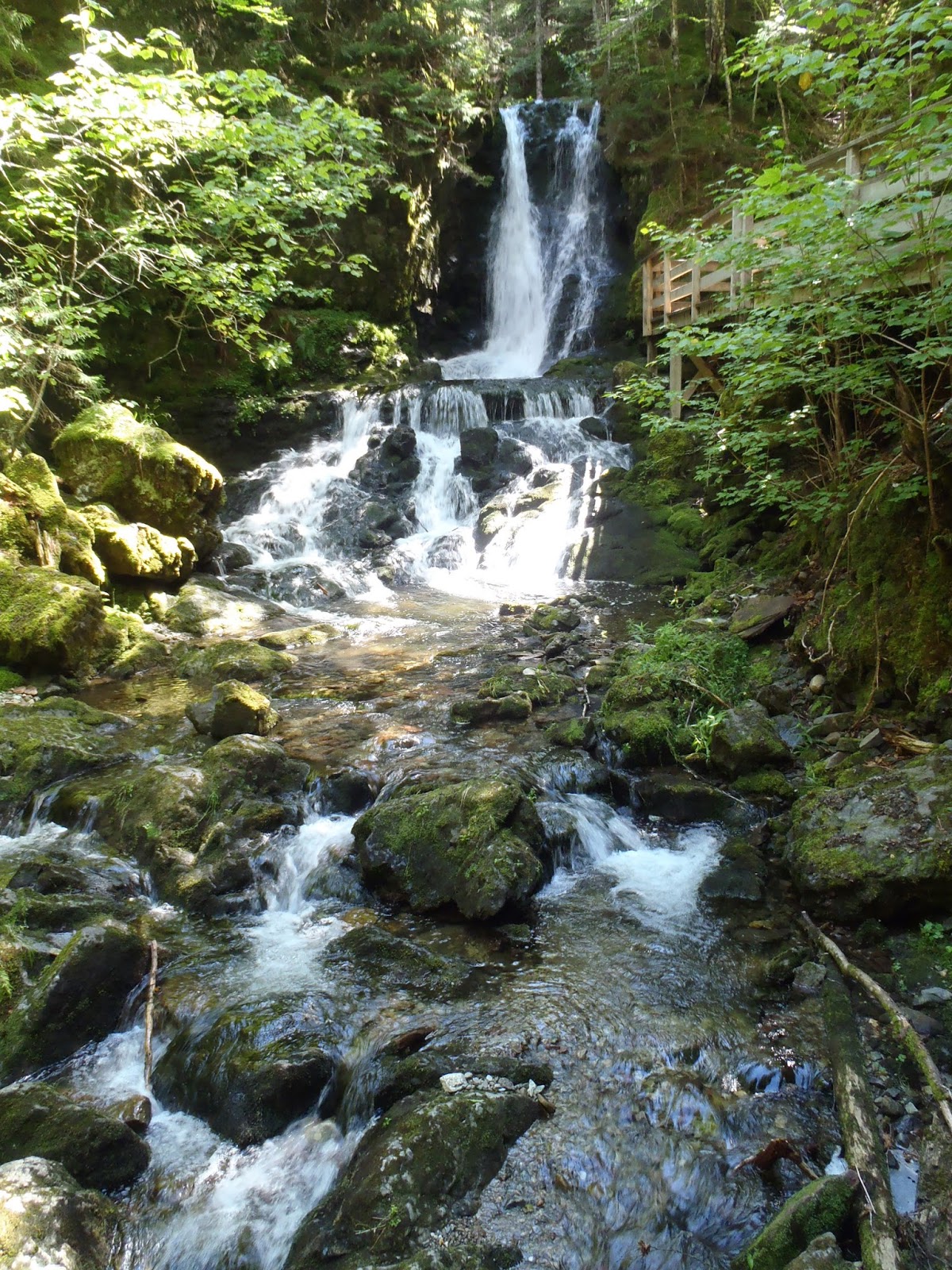 Our campsite the last two days was right near the beach, and we spent some quality time admiring the bay and breathing in our last full day of Canadian air. 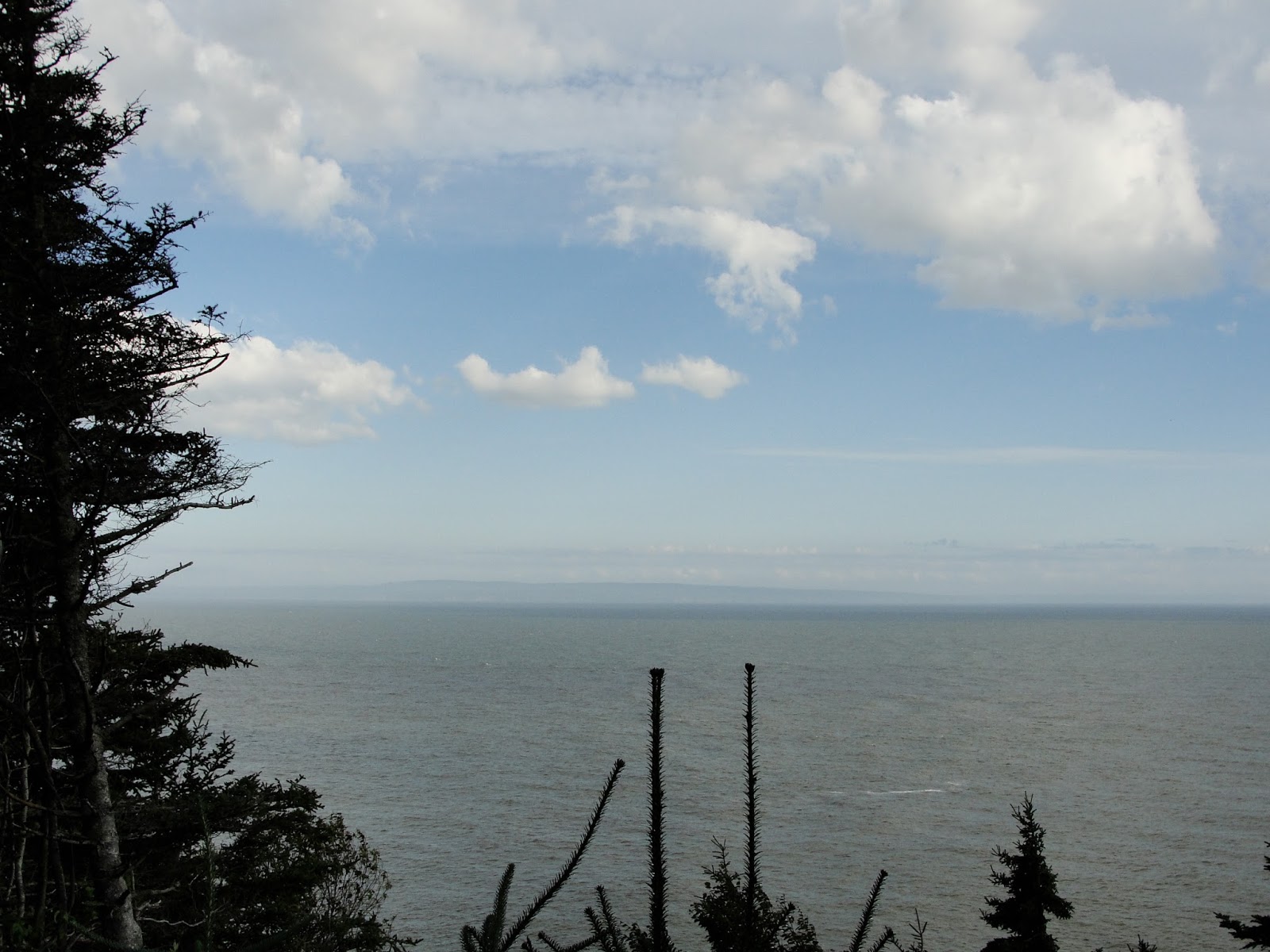 I can see Nova Scotia!
(this really is a selling point...
it's an hour's drive away)

The park is small but the trails were some of the most lush and beautiful we have seen on this trek. Moss-covered rocks mixed with ferns and new growth baby firs - gorgeous beds of green lined our path. 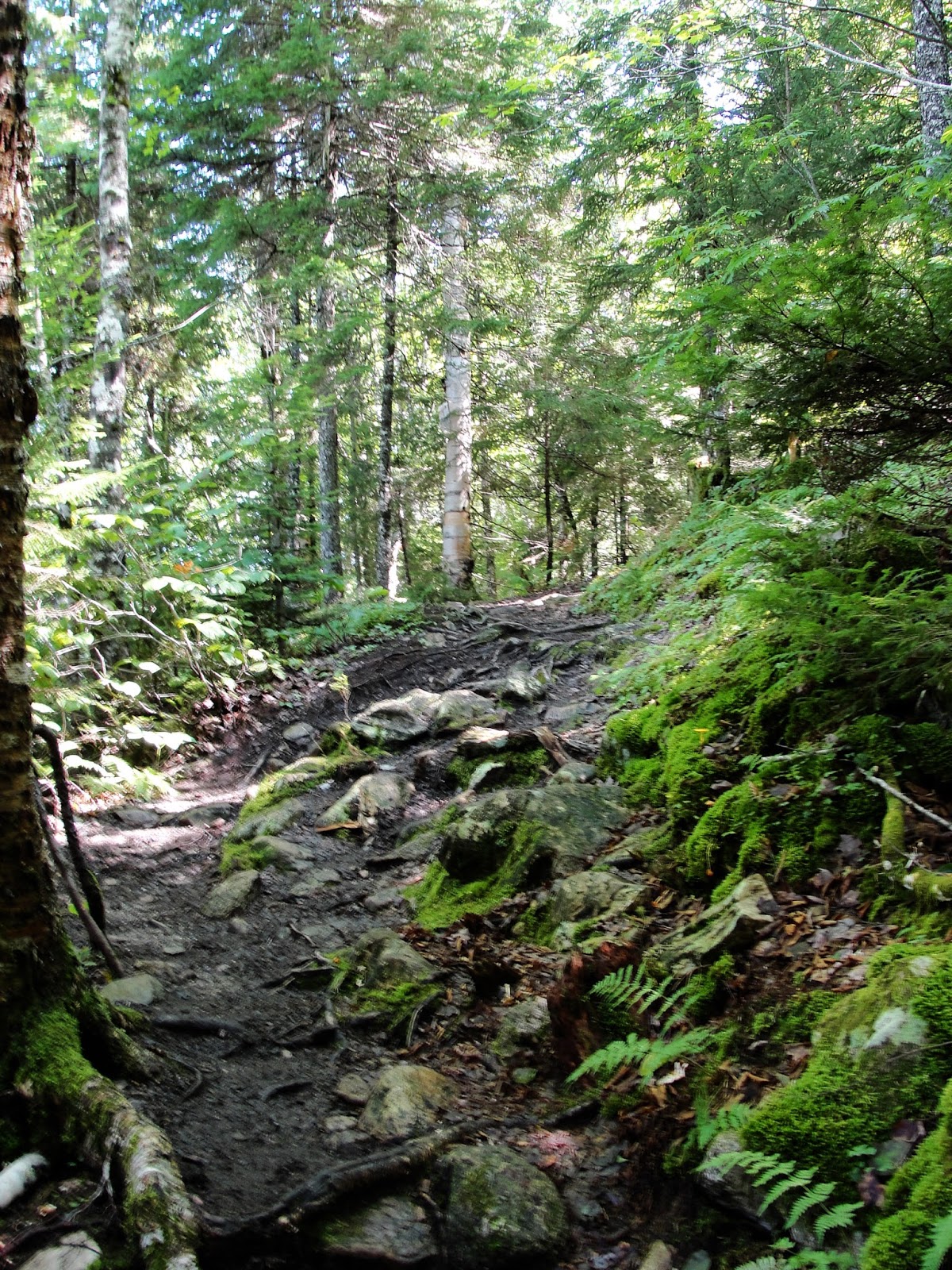 photo does not do it justice 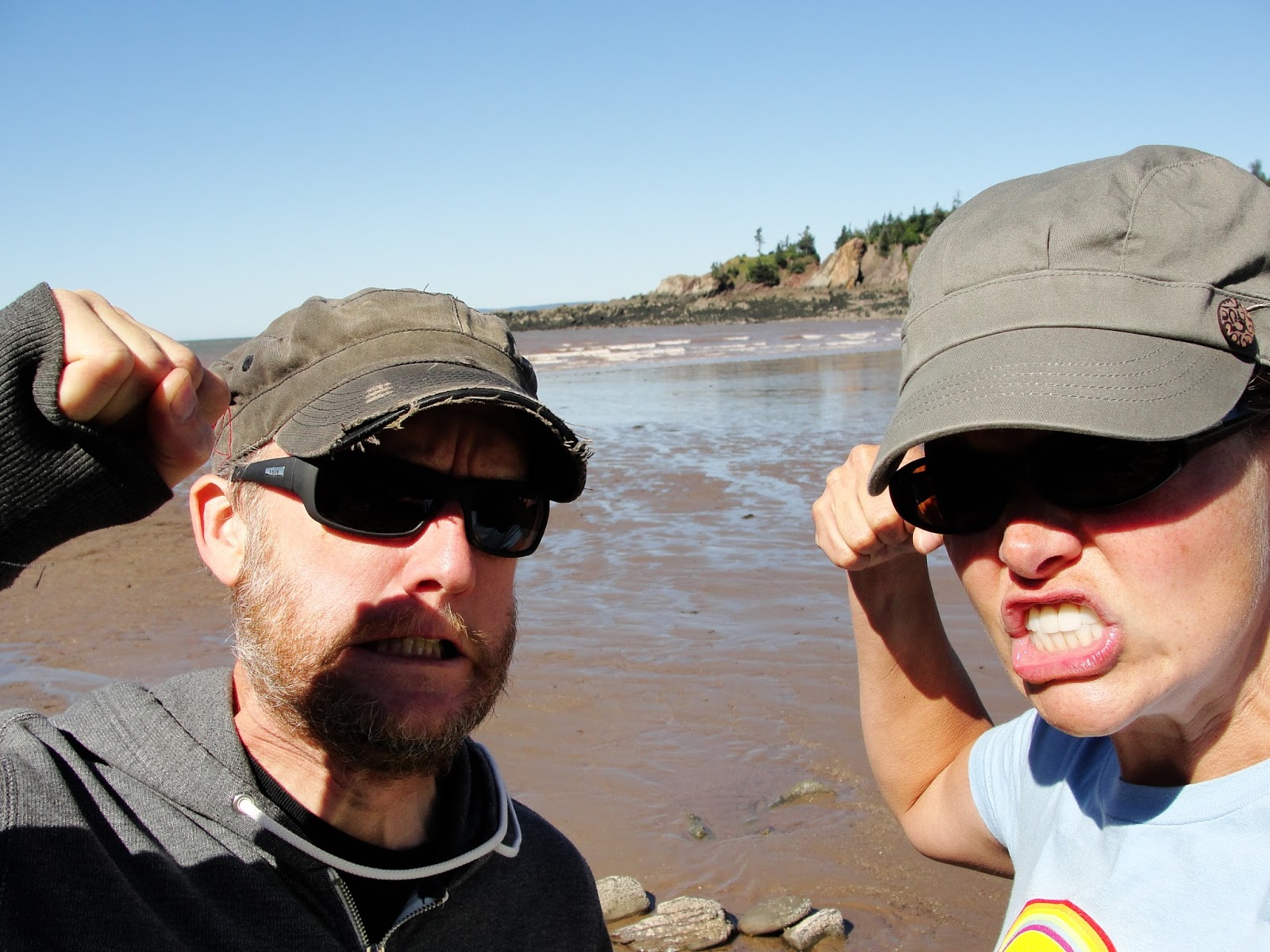 we also made a visit to Cape Enrage 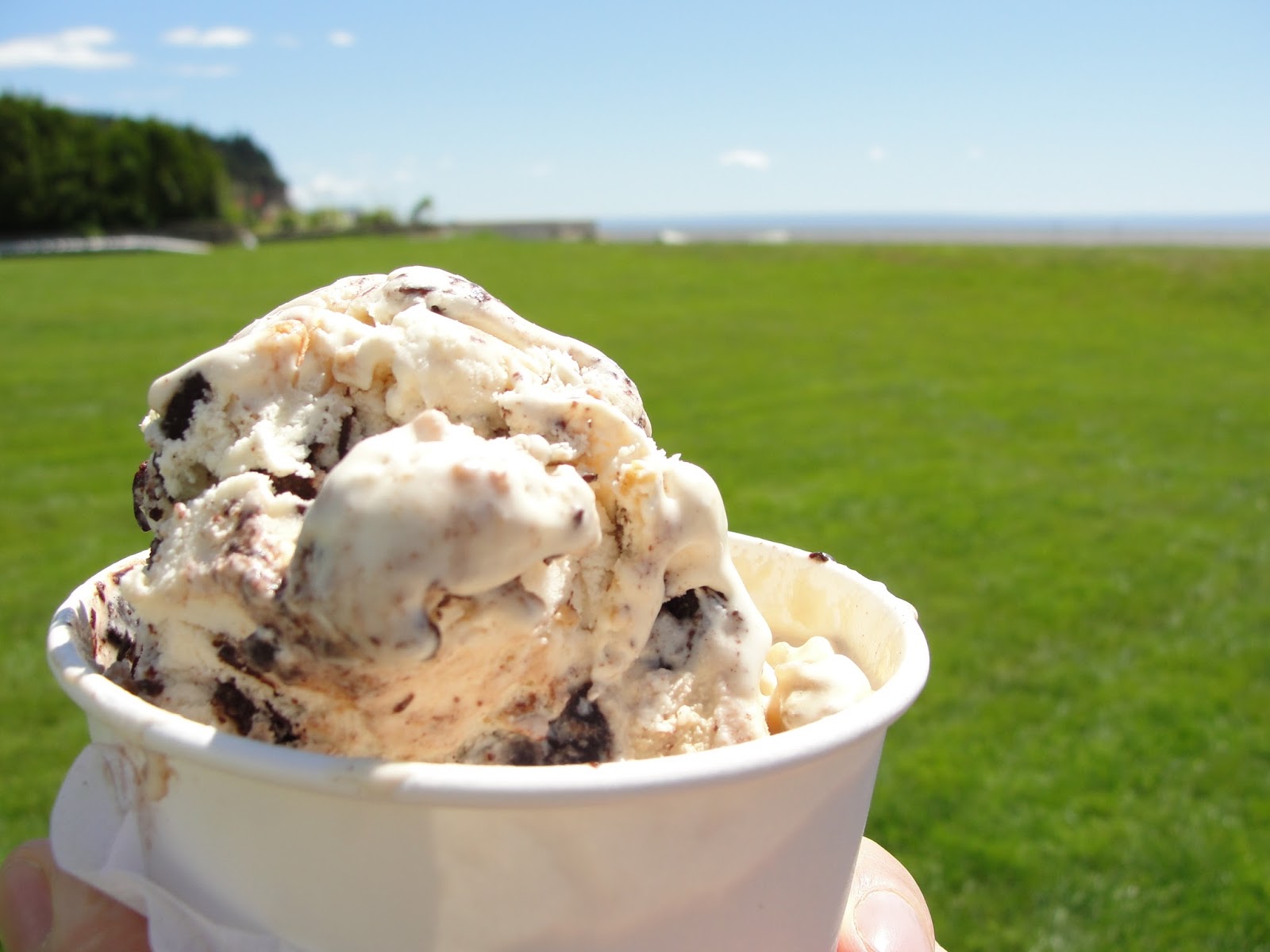 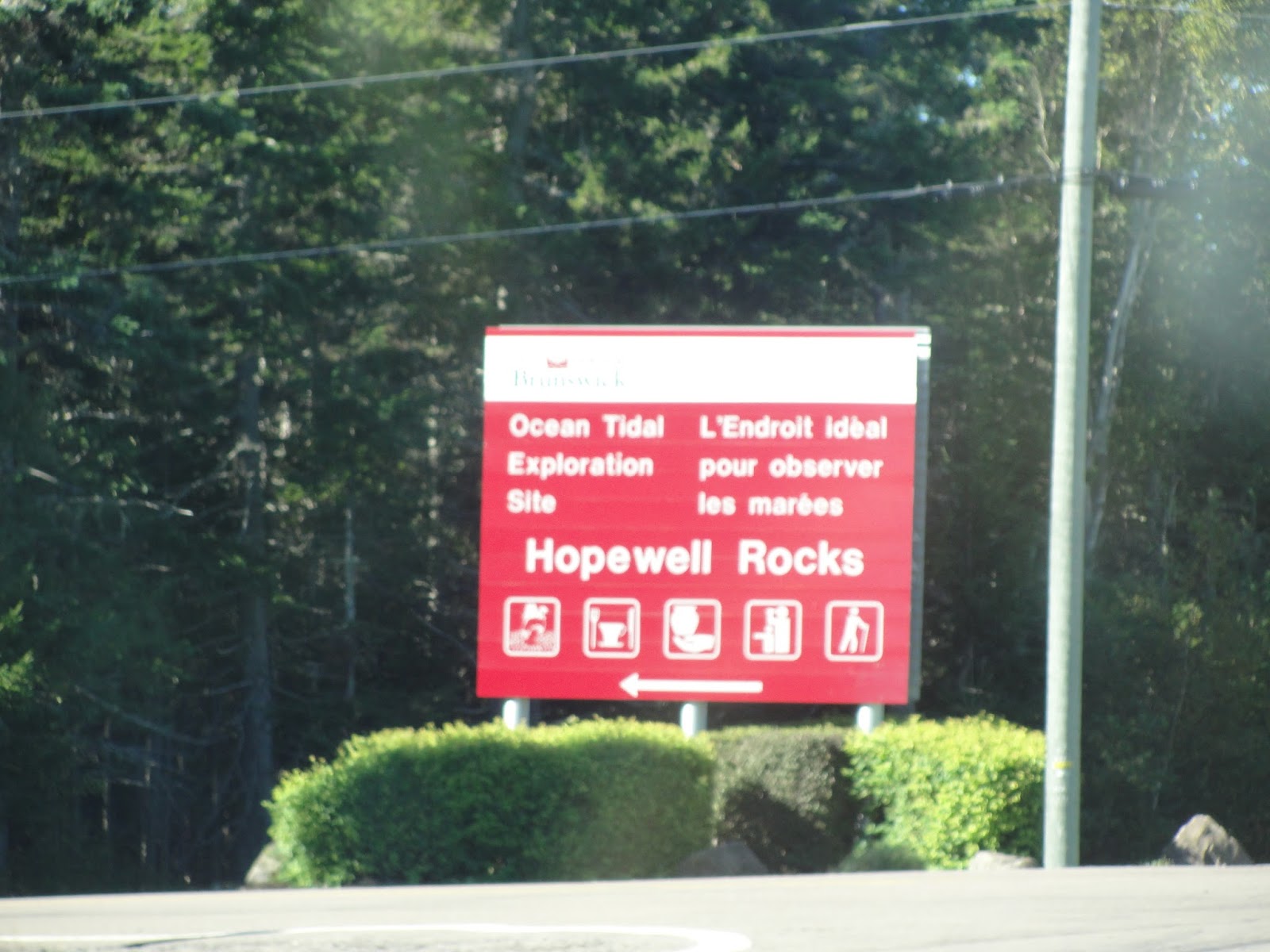 instead of paying $18 to see Hopewell Rocks

So surreal to think that tomorrow we will cross the US border. A Canadian gratitude post is brewing... Stay tuned.

It also feels surreal to look forward to three weeks in actual housing with running water and fully equipped kitchens. Quinoa corn muffins, kale/spinach smoothies, homemade almond milk and peanut butter, fresh salsa, things that come out of the refrigerator cold instead of balmy and/or moist... These are the only things we have really missed.

Well, those things and not having to put shoes and a headlamp on when you have to pee in the middle of the night. 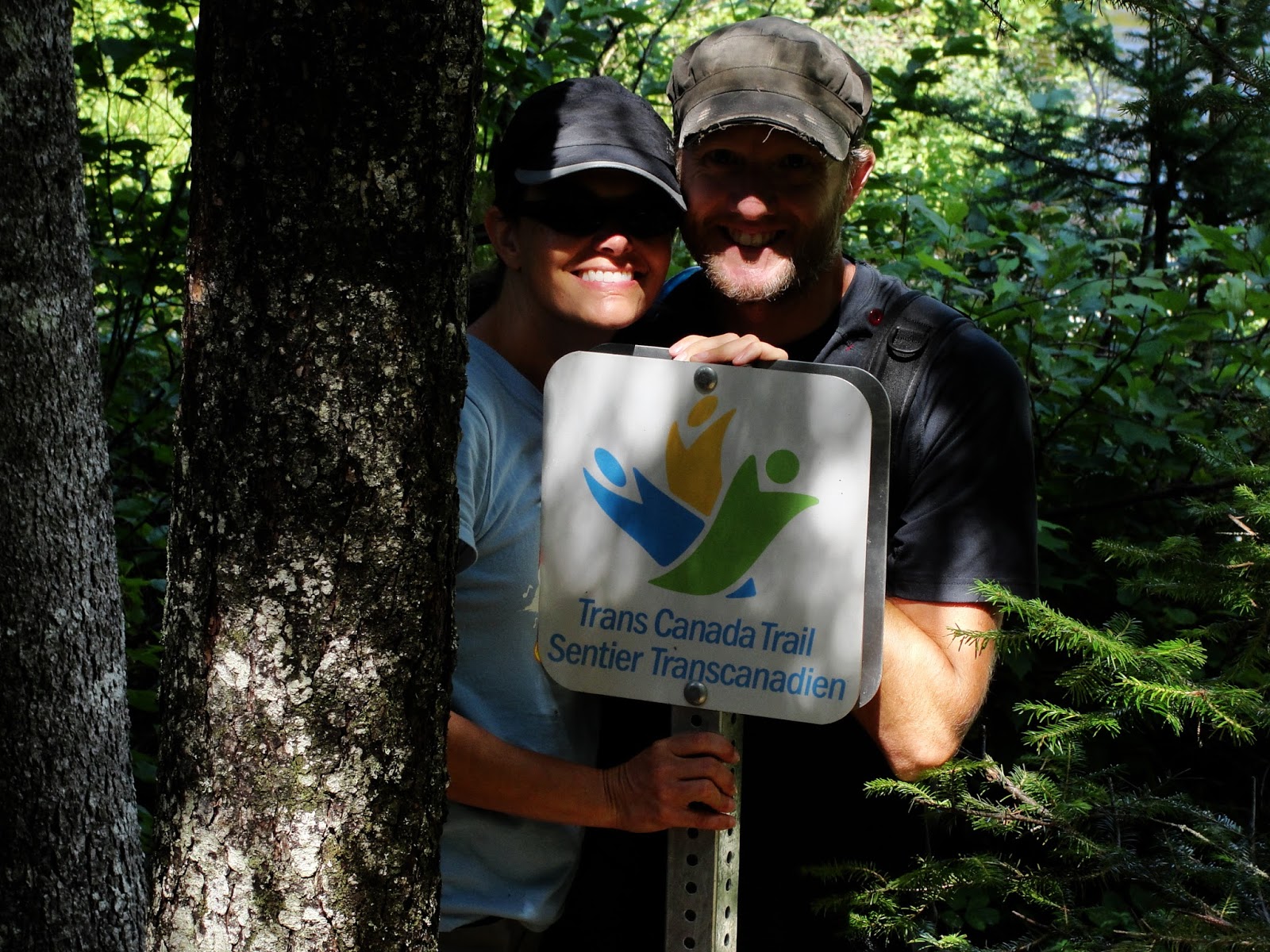 to aventura!
Posted by Jen
Email ThisBlogThis!Share to TwitterShare to FacebookShare to Pinterest
Labels: camping, canada