How we did Canada on less than $30 per person per day.

One of the most common questions we hear is "how much does something like this cost?" It's an excellent question, and one that we're not shy about answering. Our extensive RTW research coupled with our own travel experiences showed that the cost of a year on the road can vary tremendously depending on travel styles, preferences, tolerances, where you go, how you get there, even whether you travel solo or with a partner/group (e.g., lodging is much more costly for solo women opting for private rooms at hostels).

None of that is really surprising, but the range did surprise us - for 365 days of solo RTW travel, actual costs published online ranged from $10,000 up to $100,000*. Our individual savings goals of $50/person/day were definitely on the lower end of this range, and the cheaper we travel, the longer we travel, which means an unspoken /person/day budget that's even lower.

Information we found on travel blogs (like this one) was really helpful when we did our research but we didn't run across any bloggers who had taken the same general route we've planned or volunteered in the same way we've planned. So to help future travelers, we'll be posting a cost summary of each country we visit. We'll include details about our expenses, as well as suggestions for how to travel even more cheaply (or what to splurge on so you don't regret it later).

Not too shabby for Phase One in a pretty expensive western country, and well under $50/person/day! While our initial budget and actual costs came pretty close, the categories of expenses ended up being quite different. 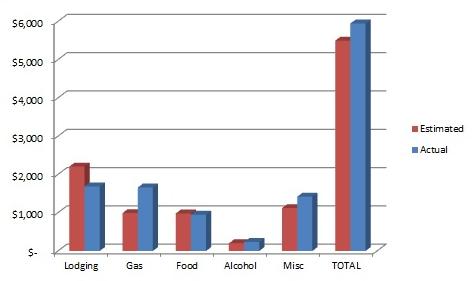 Here's the breakdown with some details... 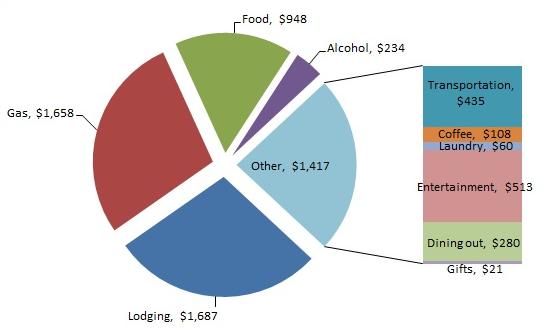 Our original gas budget was $990. Yes, we did account for the gallon-to-litre conversion. But there were a few flaws in our planning which resulted in significant variance in budget-to-actuals:

Absolutely no regrets, we loved every mile... Er, every kilometer. Fortunately, our "estate sale" funded the majority of gas expenses; we didn't pay out of pocket until somewhere around eastern Ontario. 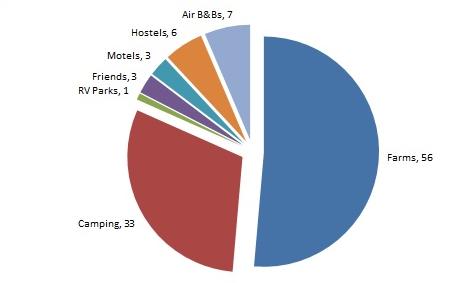 The original lodging budget we put together was $2205. We'd budgeted 7 weeks on our own, with five nights camping and two nights in motels (counting on bad weather or camping weariness). However, Patrick's tarp skills know no bounds and most of the campsites were really quite nice, so we only ended up staying in 3 motels (twice due to tornado warnings, once due to Patrick's late flight back to Quebec City). And the price of hostels and Air B&Bs, which we employed only in the major cities of Victoria, Toronto, Montreal, and Quebec City, was only slightly higher than camping. The only way to make it cheaper would've been to couchsurf... Not sure we're ready for that just yet.

We'd estimated $980 for groceries; despite having to buy more expensive gluten-free products, and despite cheese being so expensive in Canada, we generally stuck to that. (Approximate jars of peanut butter consumed: 25.)

And we ARE on vacation, after all, so we'd allowed ourselves $200 in alcohol which would've lasted us 16 weeks in the States... Turns out, a mediocre lager at a bar in Canada runs you $9 and a bottle of wine equivalent to $3 Chuck is at least $12. So even with limited celebratory drinks we still exceeded our budget there. It was worth every sip though.

We budgeted for $1120 in miscellaneous costs - $10 for each day we were on our own - thinking this would mostly go toward car repairs if needed. Since we never got an oil change and never really addressed the "check engine" light, we never knew what needed to be fixed and we were able to reallocate our miscellaneous funds as follows:

Canada and Eastern Europe will be far more expensive than Southeast Asia and South America. In the end, we'll have spent more initially but it will all balance out eventually. That's the hope, anyway! (As an aside, we found varying recommendations on whether to visit western countries first or last on a trip like this. Visiting more expensive countries first could help train you to be conservative early on; on the other hand, after spending months on $20/day in less expensive countries, once you reached the western countries you'd be wary of doubling or tripling your daily budget and therefore more conservative out of fear of cutting your trip short. Being fiscally conservative - or, as I like to call it, cheap - ourselves, we opted for the former option.)

We're still under $50/person/day, though, so things are looking good. Stay tuned for a summary of Poland!

*ONE HUNDRED THOUSAND DOLLARS. Do you know what we could do with ONE HUNDRED THOUSAND DOLLARS of travel budget? We like hostels and cooking our own meals; we don't shop when traveling; we have plenty of time for long, cheap bus rides instead of pricey flights. So we aimed for the daily budget claimed by the average travel blog we ran across - $50/person/day - figuring this would allow us a little wiggle room if we ran across an awesome (but expensive) opportunity here and there. At that rate, $100,000 would get us almost 3 years of travel!

That said, we know some of you are reading this thinking, "SIX THOUSAND DOLLARS to drive across Canada? Do you know what I could do with SIX THOUSAND DOLLARS?" Well... A lot, probably, depending on your priorities. We made this round-the-world trip our priority and worked hard to make it happen, and at least once a day, sometimes five or ten times a day, we take a moment to express gratitude that we're able to do this. We will look for opportunities to give back everywhere we go, as a small token of thanks to The Universe for allowing us this privilege.
Posted by Slowly Global
Email ThisBlogThis!Share to TwitterShare to FacebookShare to Pinterest
Labels: camping, canada, gratitude, money stuff