Just ran across this timely article...  Timely because we spent most of yesterday doing a whole lot of nothing.  Which, coming from our multi-tasking, over-achieving, high-expectations society, was actually really difficult.

For better or worse, my project management knows no bounds.  I've generally been one to get up at sunrise with a list to ensure I make the most of the day; Patrick thankfully (generally) goes along with this.  Even during down time (yoga, movies, etc) our minds never seem to be fully focused or at rest.  True in Portland, definitely true for the past two months - we've constantly been on the go.  When we're WWOOFing we're either physically active or catching up online and/or researching our next locations, and when we aren't WWOOFing we are constantly moving to the next park or the next hike so that we don't miss out on any opportunities.  Once in a while a nap is required, but generally speaking we don't do a lot of sitting around.

Yesterday it rained so we helped with the animals early in the morning and then had the rest of the day to ourselves.  After wandering in downtown Wakefield for a few hours enjoying their farmer's market, local cafe and shops, we headed back to the farm...  And read.  And played Scrabble.  And drank some tea.  And listened to the storm and the barnyard. 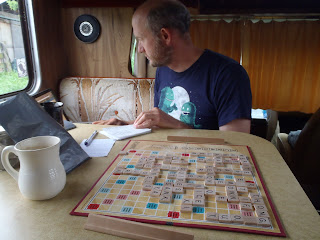 The down time that some people wish for every Saturday was an uncomfortable feeling for us.  This was partly because we are staying with farm hosts in an unfamiliar town and we're a bit out of our element, but also because it's just not our nature to relax.  So in between all those activities we'd look at each other and say, "hmm, now what?"

We talked about what we'd be doing in Portland if we had a rainy Saturday to ourselves.  Chances are high that errands and food blog research/cooking and game night would have been involved, but it wouldn't have felt as lazy as yesterday. (See?  "Lazy."  Why did I use that word, instead of "restful" or "peaceful" or "rejuvenating"?)

Today's weather isn't looking much better, and when you add a late night of fun with our hosts the night before to the mix, I don't think there will be much activity today either.  That's good.  The farm has a new foal, a new calf, and several brand new chicks to admire.  There are goats to pet and play with.  There is a Scrabble rematch to be had.  There is a nap to be taken.  There's a Portland music mix to make for our hosts.

But there I go, planning again... sigh.
Posted by Jen
Email ThisBlogThis!Share to TwitterShare to FacebookShare to Pinterest
Labels: life on the road