Some of you may know that 2016 has been a pretty challenging year for us. After three fairly easy years traipsing around the world, I suppose we were due for a dose of reality at some point... (Granted, our challenges don't exactly rival those of many others these days, but they are challenges none the less.)

More than once over the past few months we've turned to nature to regroup. Oceans, big starry skies, and mountains formed millions of years ago have definitely helped to remind us that we are mere blips in the universe (this universe, which doesn't even begin to encapsulate all the other universes, which is a rabbit hole my feeble little brain can't even go down for fear of imploding). These natural places remind us that 10, or 50, or 100 years from now, our 2016 troubles won't matter. 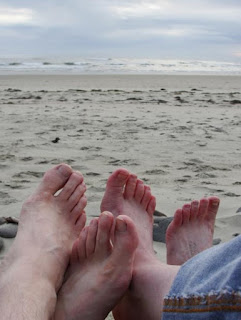 Waterfalls have a slightly different effect. I can't speak for Patrick on this, but waterfalls remind me that I am not in control. Of anything, ever. There's nothing like standing at the base of a waterfall - or even better, the mouth, if you can get to it - and actually feeling the power of the water as it tumbles over the edge.

Oregon has no shortage of beautiful waterfalls, as I've mentioned here. And here. (Oh, and here, here, here, here, and here.) After all our time in Oregon and our many recent road trips around the state, there were a few waterfalls nearby that we still hadn’t visited so when June's dose of reality hit, we got in the car and headed to these: 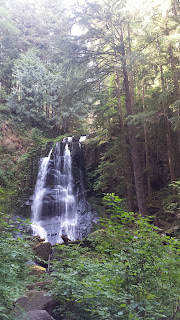 "you are not in control"
- upper Kentucky Falls "you are still not in control"
- lower Kentucky Falls 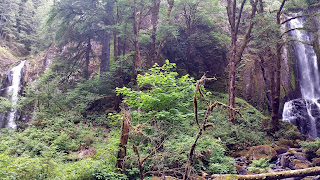 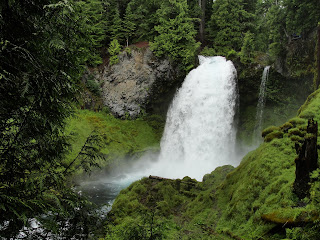 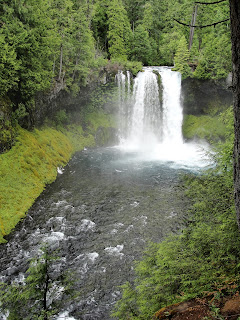 Spring and early summer are definitely the time to hit all of these places. During our June visits, the roar of the water was absolutely deafening and the moss and lush vegetation were simply stunning. In fact the rest of the Koosah/Sahalie Falls road trip would be spent in the high desert (more on that later), so that afternoon we took ample time at both waterfall sites to admire the gorgeous green scenery that we wouldn’t be seeing again for a while...

Whenever life hands YOU lemons, we highly recommend regrouping however that manifests itself to you. Nature, music, art, community - it's all good. Just be sure to take your freshly-squeezed lemonade (and maybe your old friend, Mr. Flask) along!
Posted by Jen
Email ThisBlogThis!Share to TwitterShare to FacebookShare to Pinterest
Labels: explOregon, Friday five, health and well-being, living like a local, pacific northwest